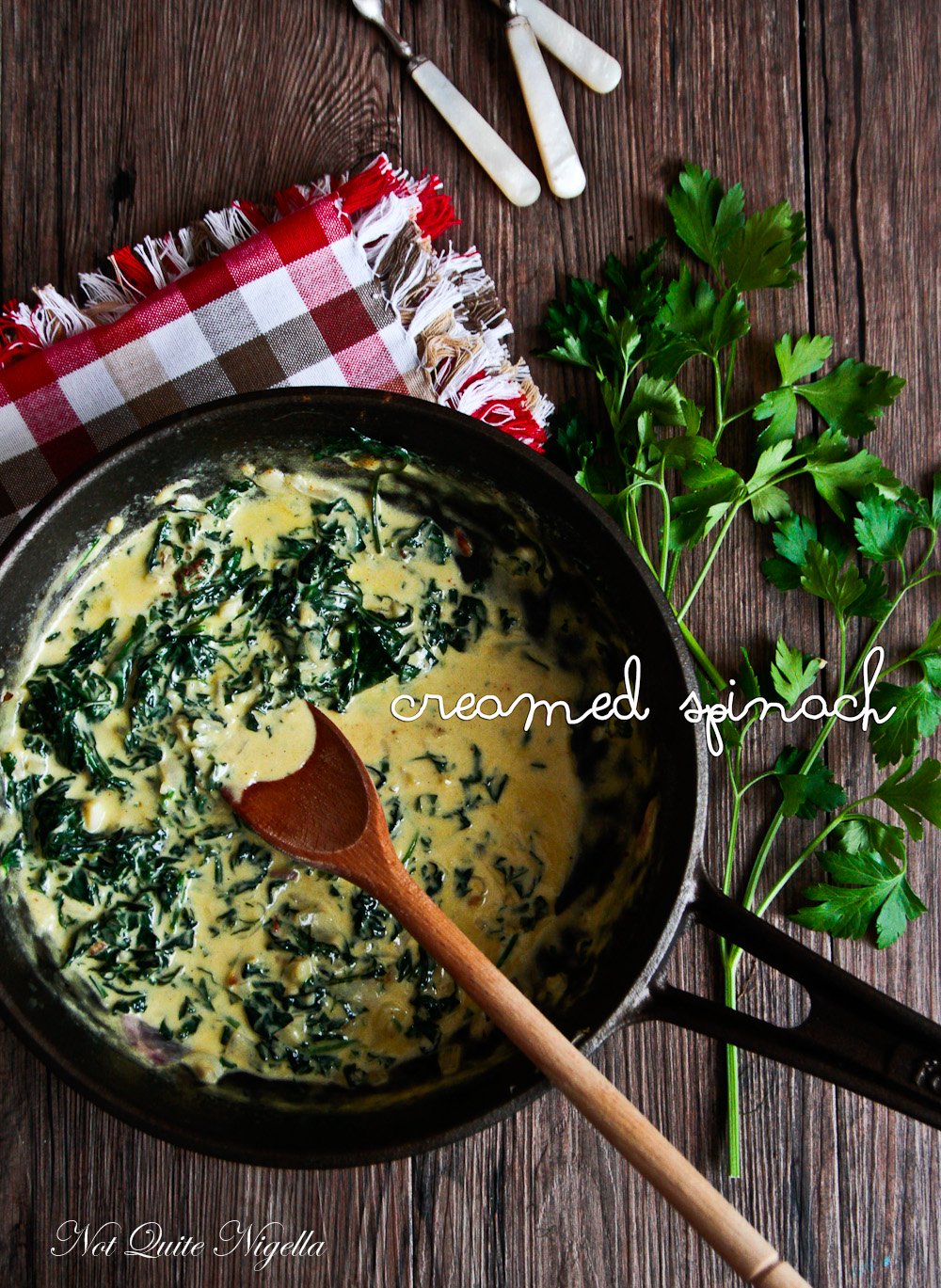 It may sound strange but I was in my twenties when I first tried creamed spinach. I remember it was when I was working in North Sydney and my friends and I had already exhausted almost every workplace lunch option. There was one shop that I hadn't visited and a friend called it the "creamed spinach place." so I followed her suggestion and ordered a dish that included the creamed spinach. I took one forkful of it and it was heavenly.

"And to think this is all just spinach!" I said to her while we were seated opposite each other in our tiny rabbit warren cubicle. We were the assistants in an ad agency and as the lowest in rank we had the tiniest cubicles in the office. She shook her head, "And there's a load of cream in there too."

Yup that's why it tasted so damn good: the cream. 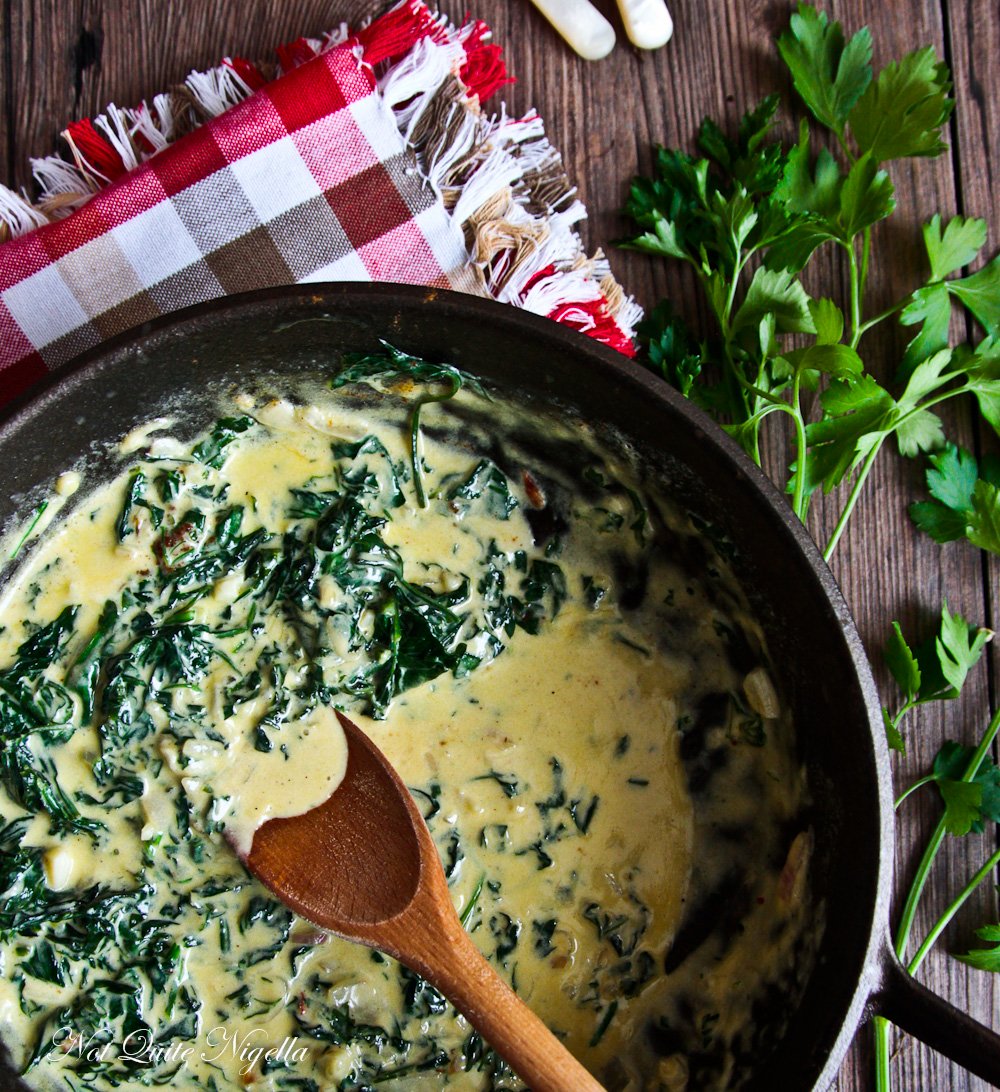 So while I adore creamed spinach, it's not something that I have very often because I have tried compromising on the cream but it doesn't really work quite as well but my recipe is pretty much a doppelganger of that shop's creamed spinach. But a friend served me a slight adaption of creamed spinach and that was to use half spinach and half parsley.

It was the perfect timing as I had some corned beef that I usually serve with parsley sauce. I love herbs but sometimes for recipes you don't need more than a few tablespoons full and you have a whole lot left over. This is the perfect recipe for those times when you don't want the rest of the bunch to go to waste.

How much cream you use determines how liquid and saucy it is (I used two cups and that made for a lot of sauce). And I'm being a bit silly saying that you should only use cream as other friends have adapted this recipe using evaporated milk and they've really liked it. But if you do have an excess of parsley you could definitely give this a go. Parsley also has health benefits-it is vitamin rich and is excellent for the immune system among many other things. Adding it here just gives the slightest lift to the spinach without seeming out of place.

So tell me Dear Reader, what do you do with any extra herbs? Do you end up wasting a lot of them or do you put them to good use? 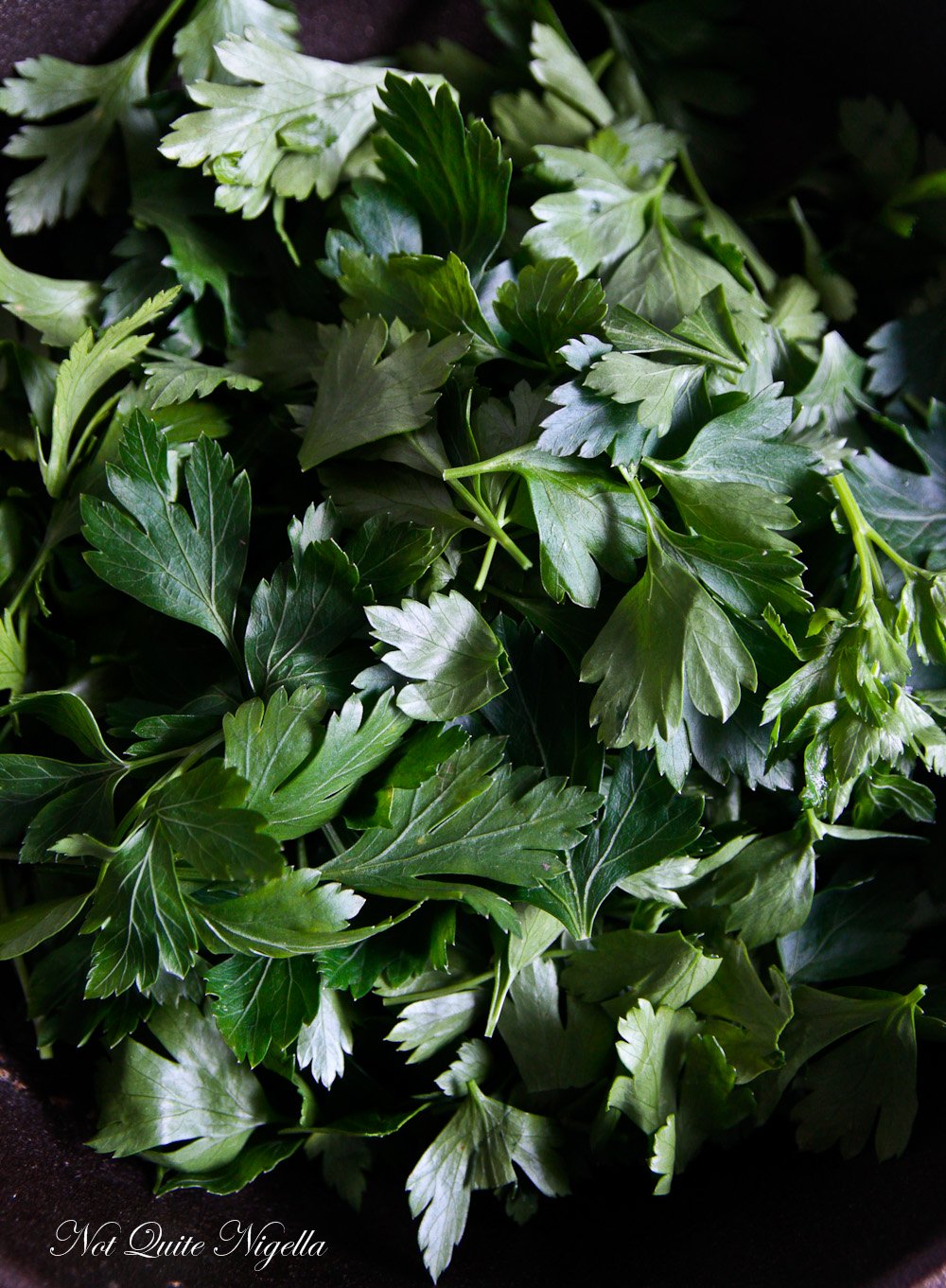 Step 1 - Put a kettle-ful of water onto boil. Meanwhile pick the leaves from the parsley and place them in a medium sized saucepan or pot (I just put it in the saucepan I'm going to saute it in). Pour the boiling water over and cover with a lid and allow to soften for 1 minute. Add the spinach leaves and stir around and allow these to wilt. 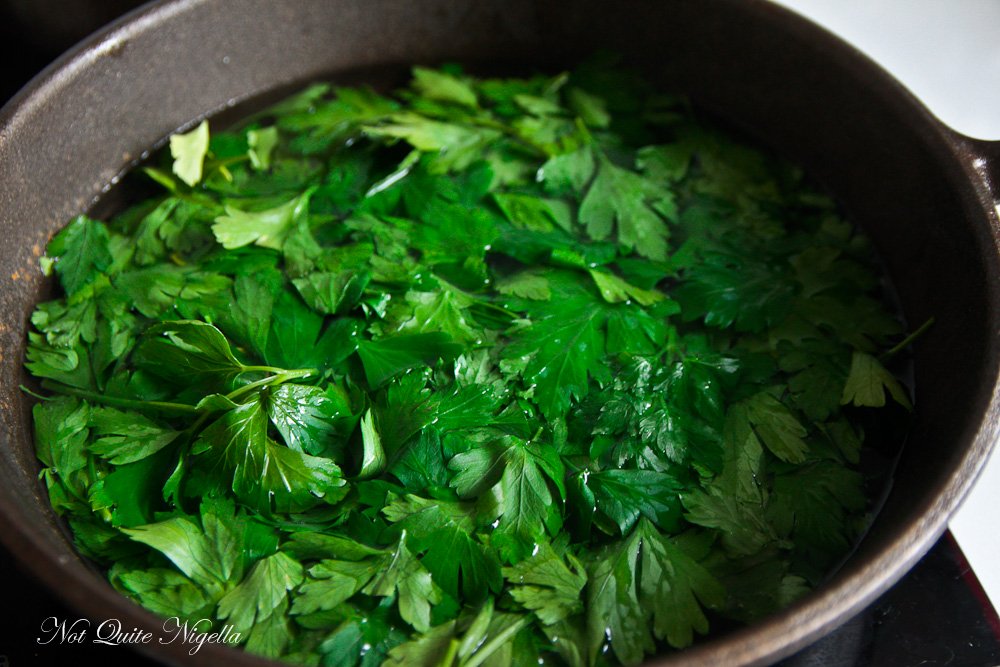 Step 2 - While they are wilting, finely dice the eschallot and garlic. Drain the spinach and parsley in a colander and squeeze the spinach and parley mix and chop roughly maybe half a dozen times (you don't have to chop it very much). Heat the saucepan on medium heat. 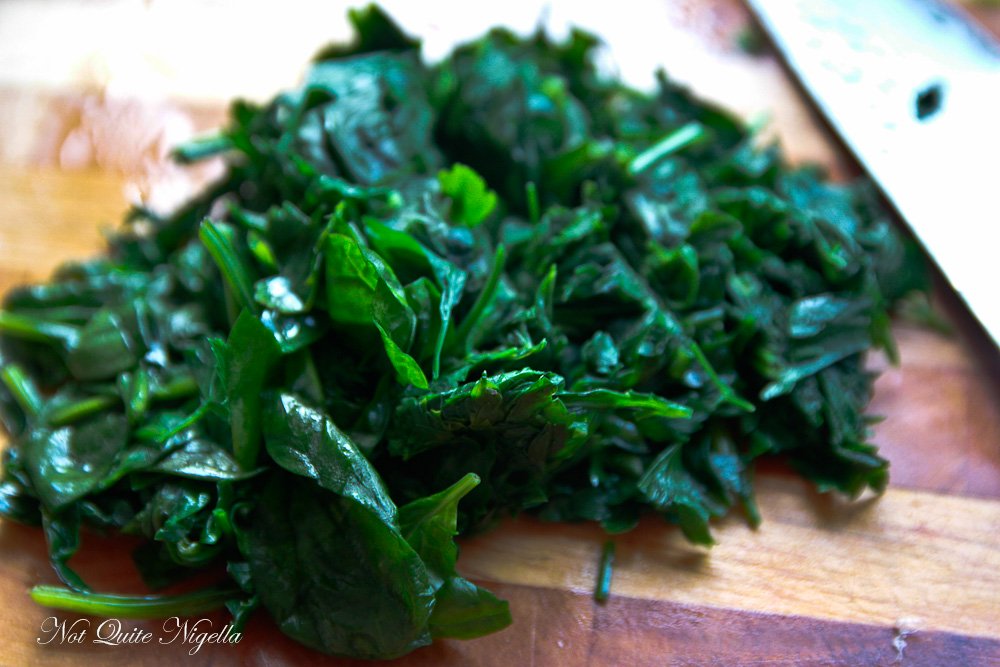 *Step 3 - *Add oil to the frypan and saute the eschallot and garlic and cook until softened. Add the cream - if it is too cold it may spit a little. Simmer until the cream has reduced and thickened by about a third. As you can see mine was quite creamy and I used 2 cups but use less if you don't want as much creamy sauce (although it is delicious!). Add in the spinach and parsley and simmer. Season with salt and pepper and grate a generous amount of nutmeg on top. 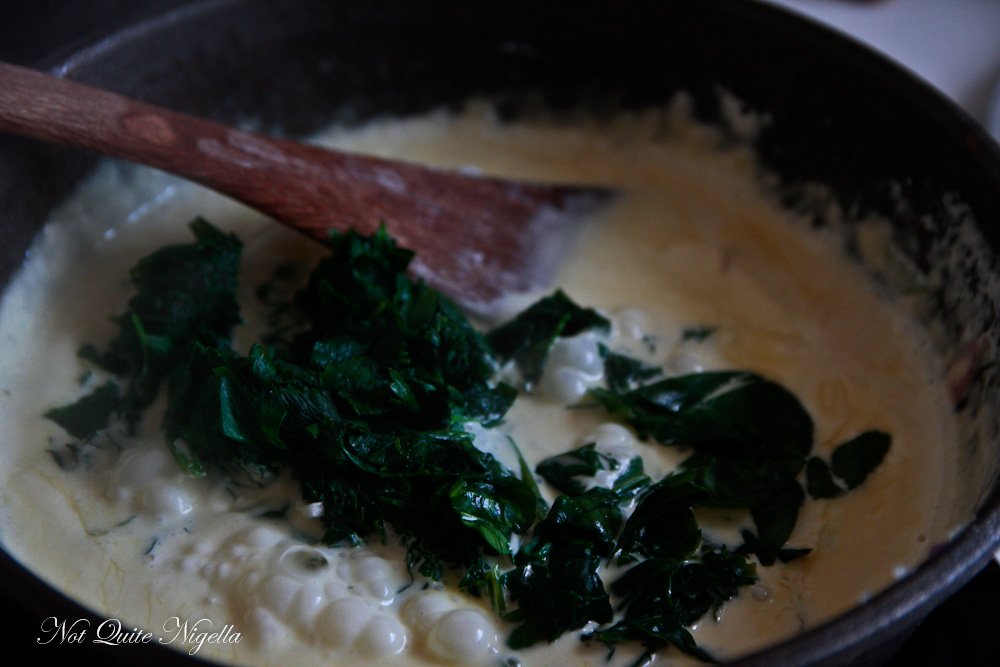