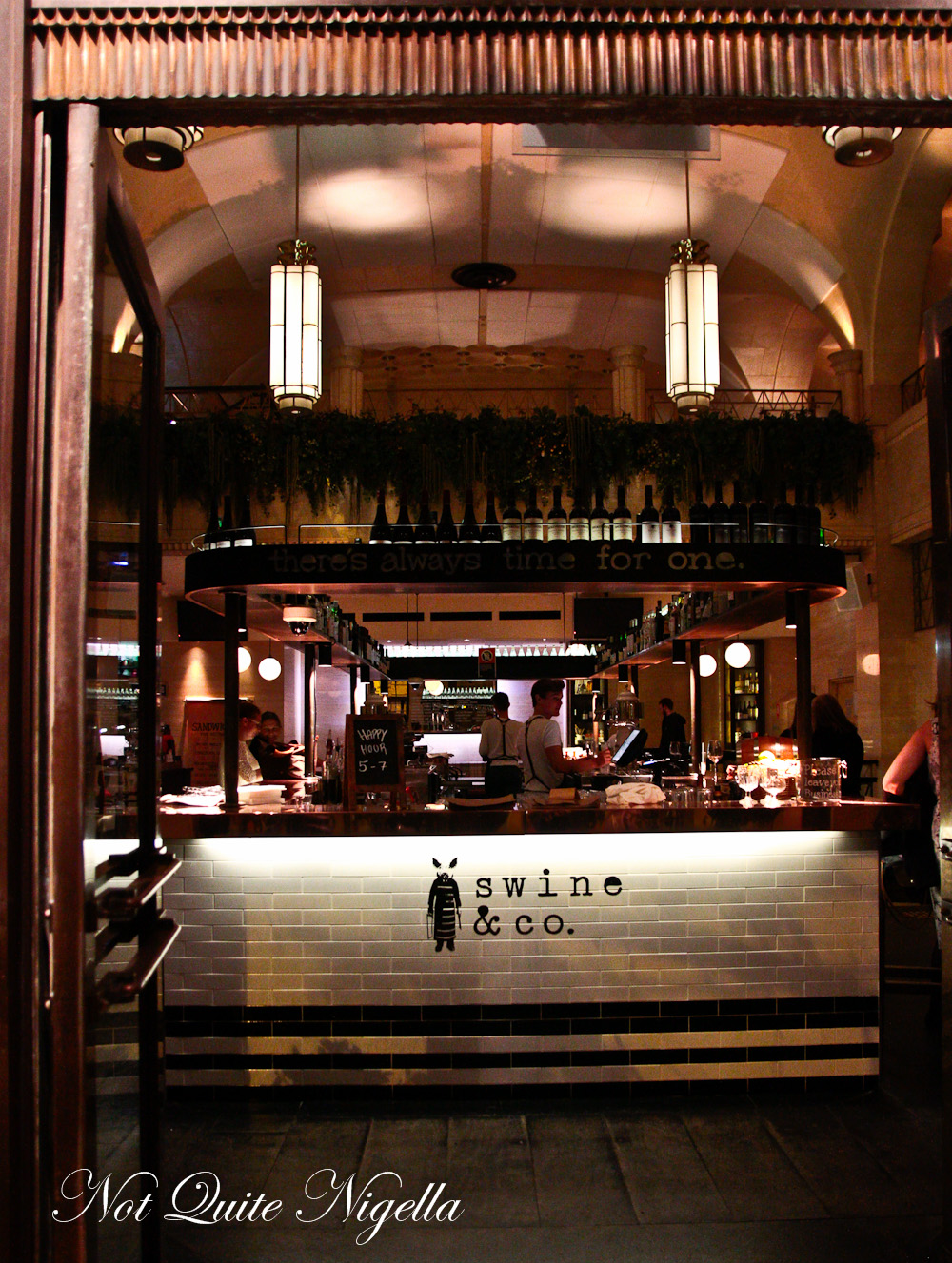 "Can we do it?" I say peering over the menu at Swine and Co.

"Let's go the whole hog," Teena says nodding confidently. The whole hog she meant was semi literal. We had all just agreed to have an all pork dinner at Swine & Co. 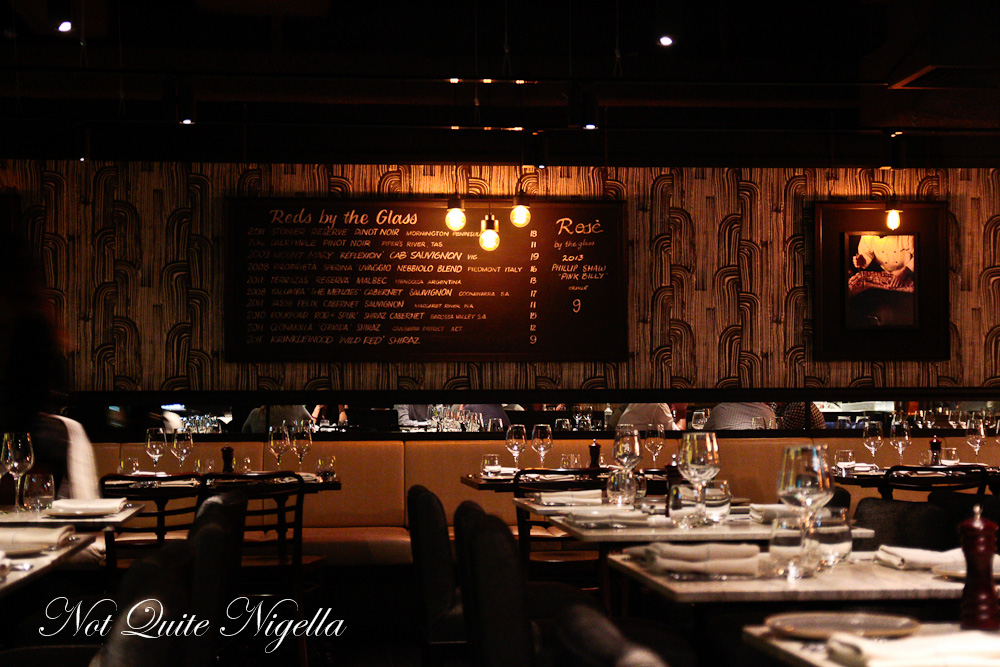 Earlier I had told them about a friend who becomes annoyed at other diners when they order the non specialised item. We were dining at a renowned seafood restaurant and we overheard a gentleman at the table next to us order a steak. "Fail..." she whispered, "Who orders steak at a seafood restaurant?" It stands to reason that when dining at a place with a distinctly porcine name, it seemed only natural that we order pork and lots of it. Head Chef Robert Taylor is formerly of Manly Pavilion and Pier. And yes we checked, the desserts don't have pork (although that seems like a missed opportunity - hello bacon!).

Swine and Co is located on O'Connell Street in an Art Deco building that was previously the Bavarian Bier Cafe and echoes of its grand past as the Bank of New South Wales still remain. It is owned by the same group that has Sake and Ananas. The restaurant is located downstairs past the bar where Happy Hour is currently taking place (Happy Hour drinks don't extend to the restaurant). It's very on theme with signs like "Close the gate" as well as mounted boar's heads, a plastic butcher's curtain and a display of cleavers and knives. We're shown to our table, facing the open kitchen where the sweet smell of roasted meat passes over us like a wave. If it weren't clear from the name, this is perhaps not the place to take sensitive vegetarians... 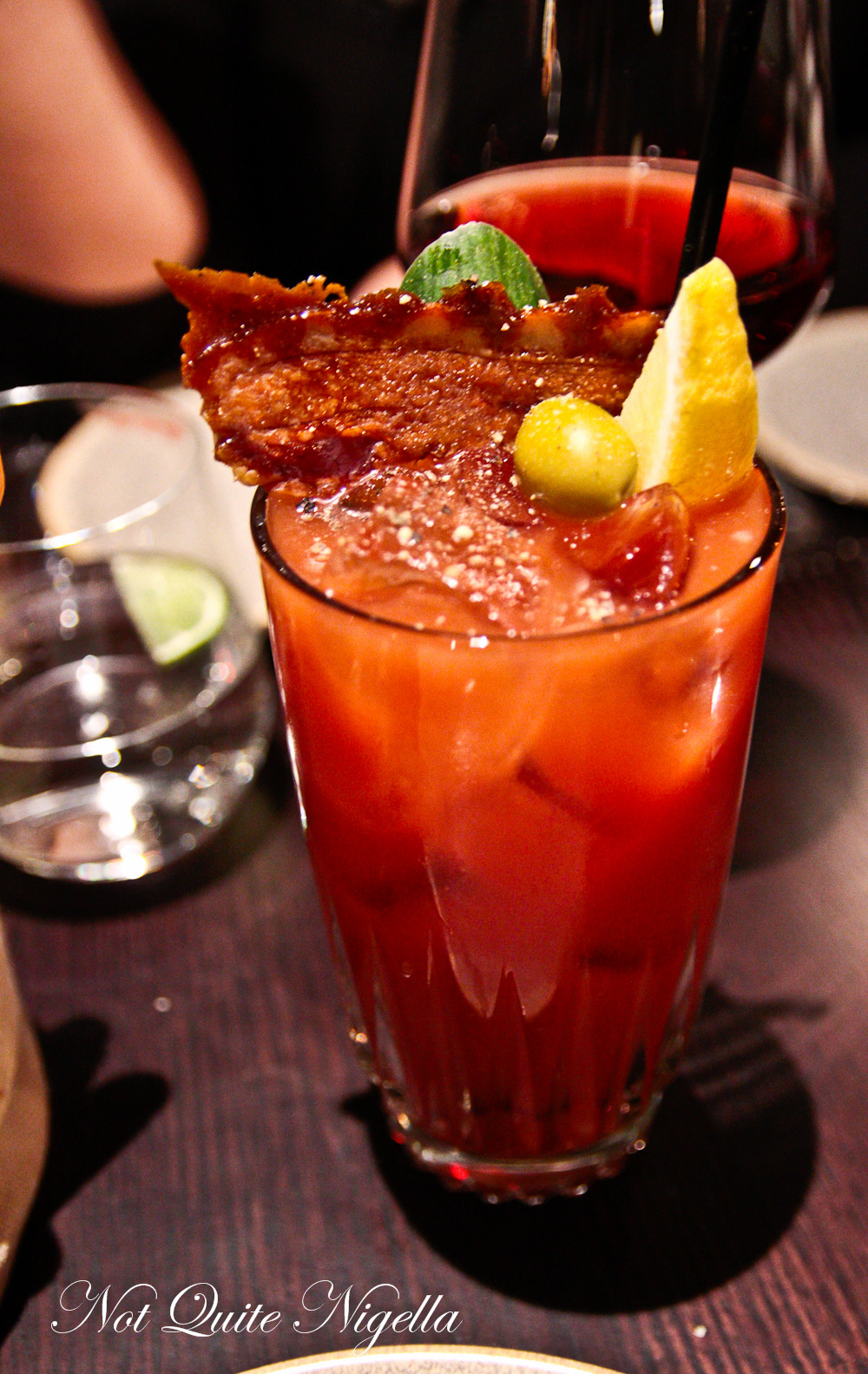 We order drinks first and are told that the Bloody Mary has bacon in it. Our waitress is friendly as is everyone there. The Bloody Mary is excellent, spicy and well balanced and the piece de resistance is the adornment, a thin caramelised piece of bacon rasher that tastes like *bakkwa *or Chinese flattened roast pork. 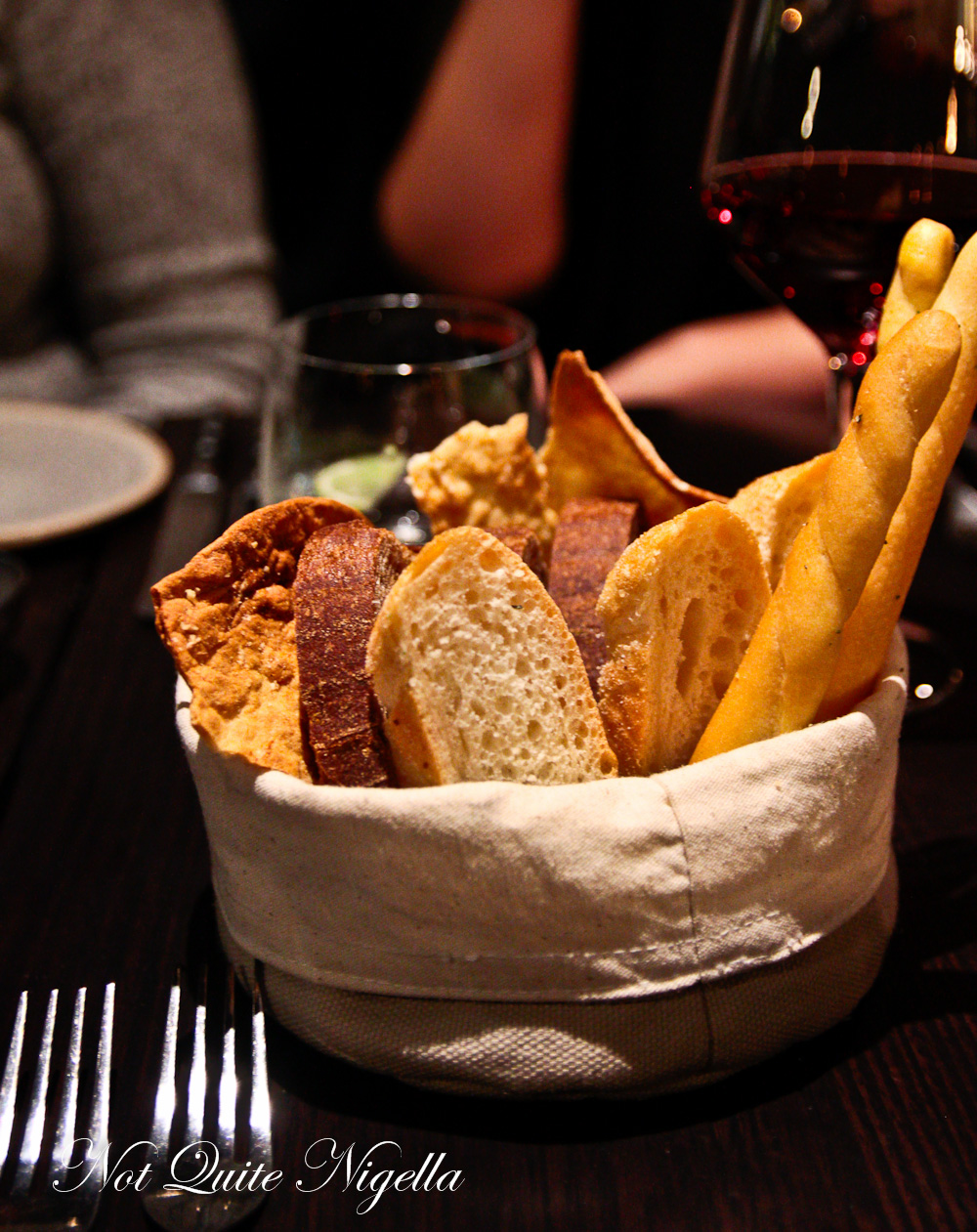 Ahh the complimentary bread basket. There is a good amount of bread and crackers here and my favourite is the olive oil grissini and the parmesan lavosh. 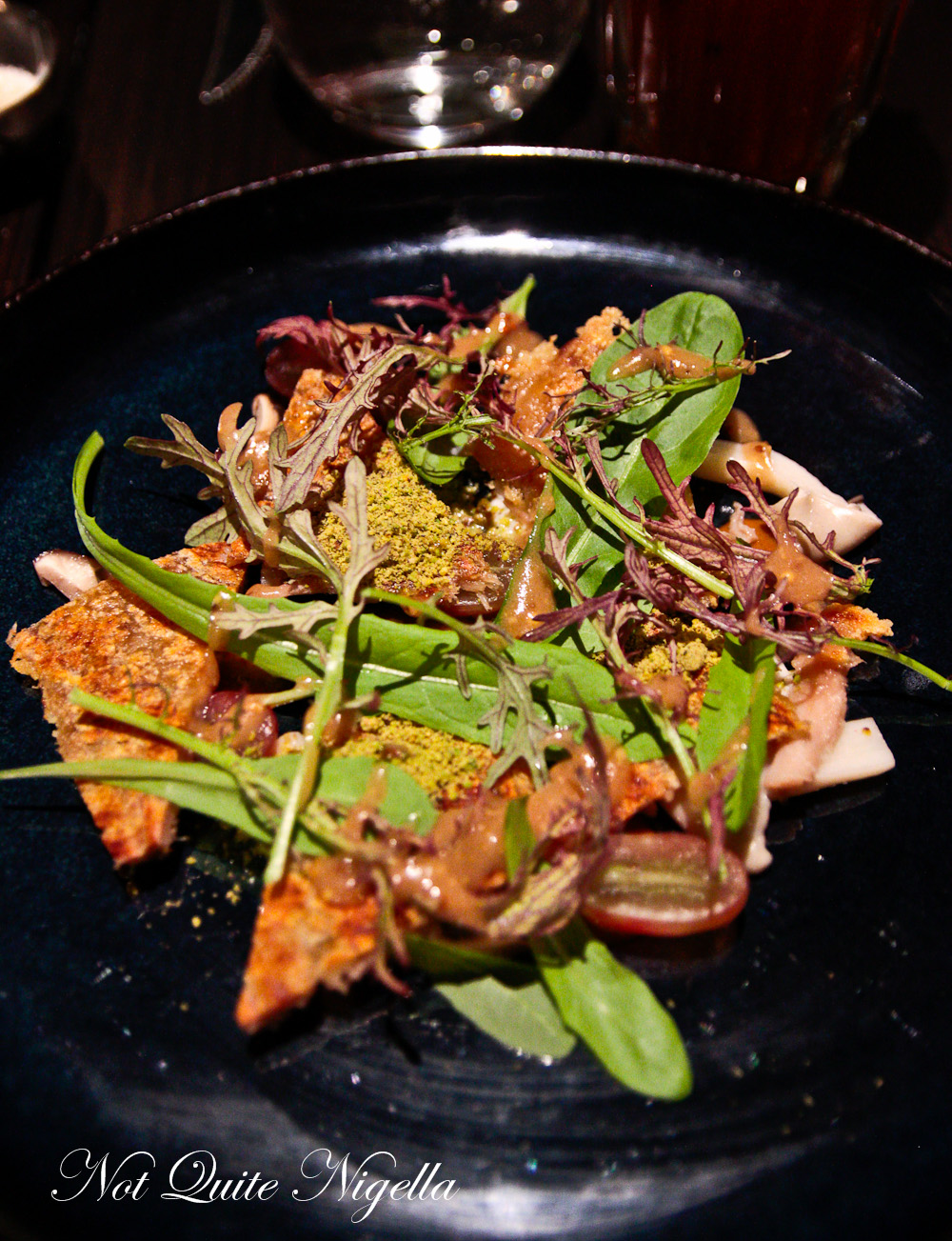 We share one entree and it's more to whet our appetites than to assuage hunger. It's a crisp pig's tail, deboned and flattened served with sweet dabs of pine puree, halved grapes, pickled shiitake and oyster mushrooms and a wasabi pistachio puree. The pig's tail is crispy and tooth stickingly good with a thin jellied layer of fat underneath the sticky skin. 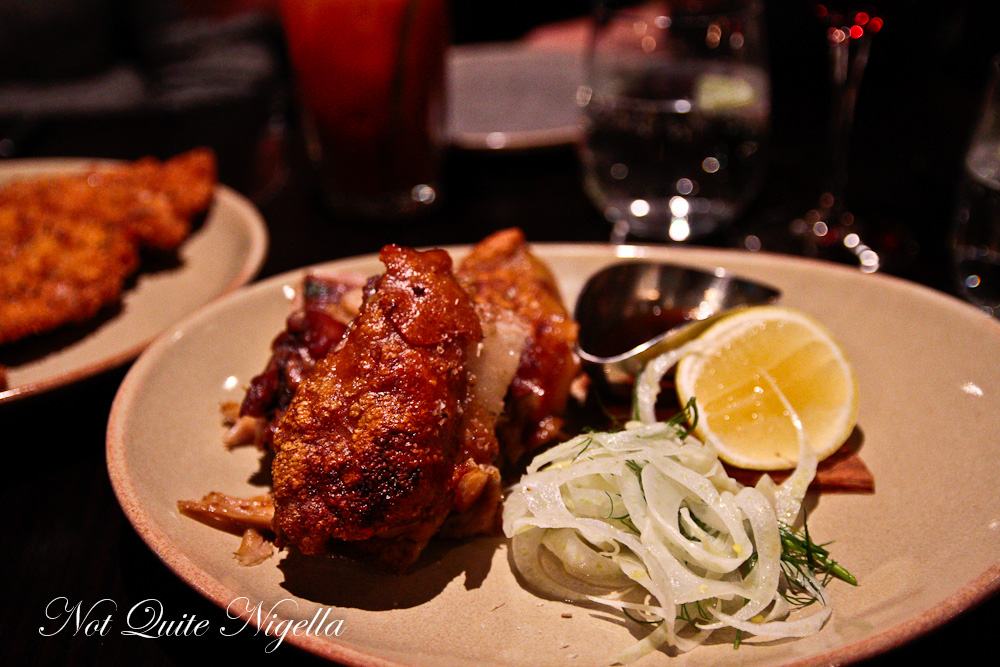 The mains arrive together. The Macleay Valley suckling pig is cooked in a Beechwood charcoal rotisserie oven. It's said to be the star of the show and it comes out as four pieces of juicy meat with a thin baby fennel salad to the side and celery salt. The bone-in meat is juicy and the piece that I get is quite fatty. The salad isn't much and you would want to order more sides for the amount of meat. 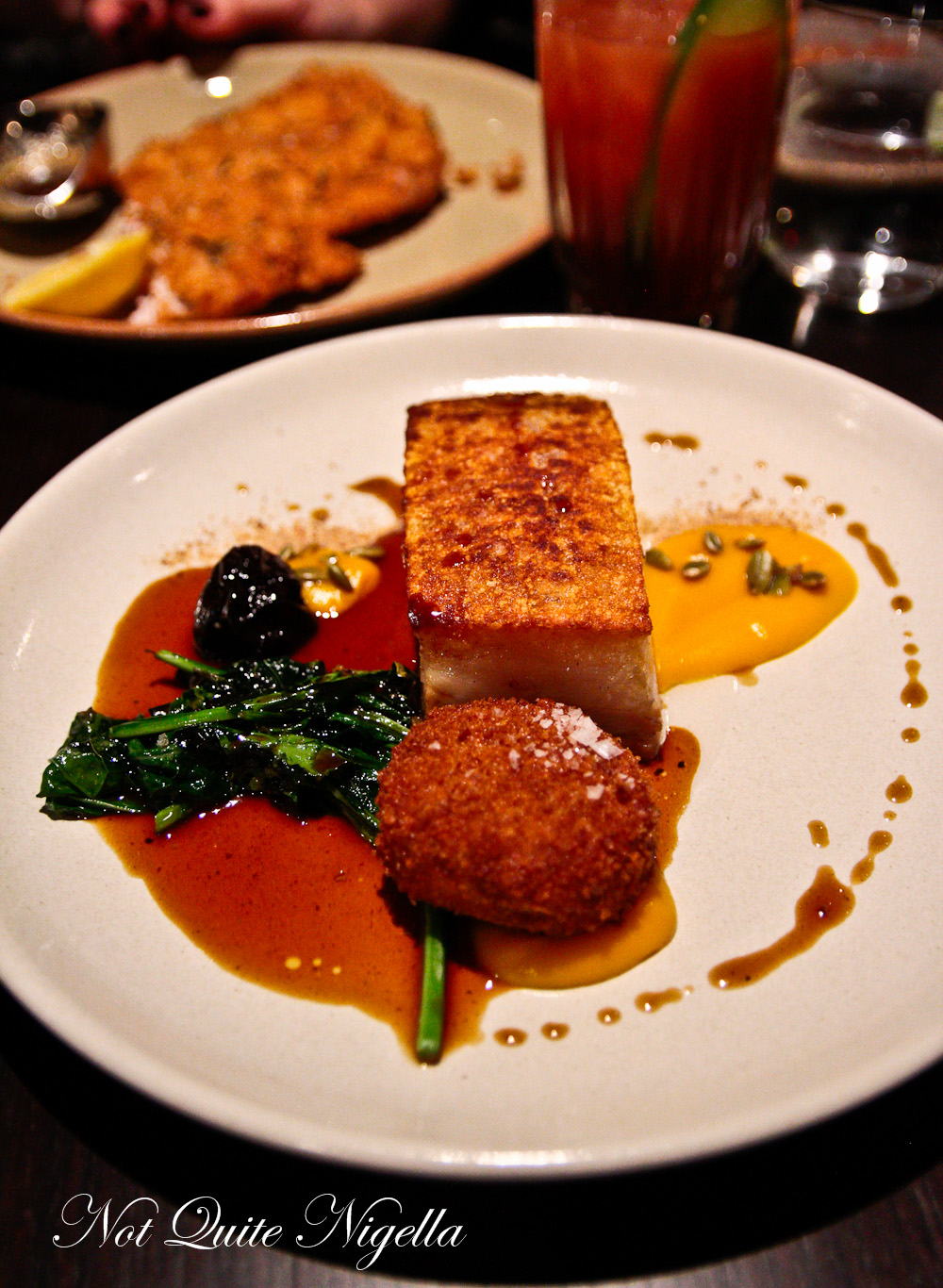 Everyone's favourite main is the pork belly which is a triumph in textures. The milky hued meat has just the right amount of wobbly, melting fat and the crunchy crackling is superb. It is paired with a pumpkin puree, pumpkin seeds, a golden suckling pig croquette, Tuscan kale, a single prune and a pepper jus but the feature is definitely the cut of pork belly. 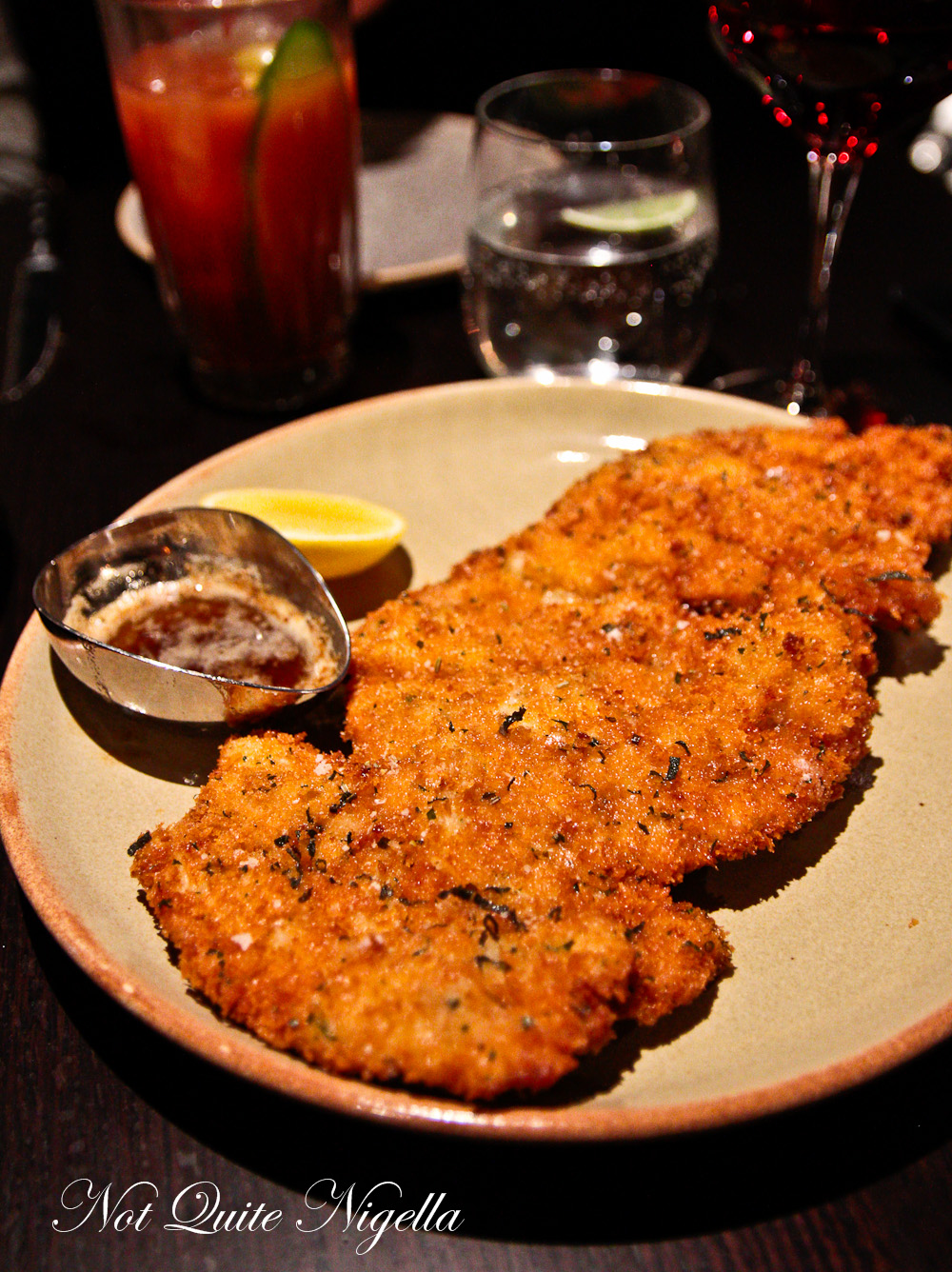 The pork schnitzel is huge, crunchy crumbed and served with a side of anchovy butter and a lemon wedge. There's something almost missing with this though in flavour. 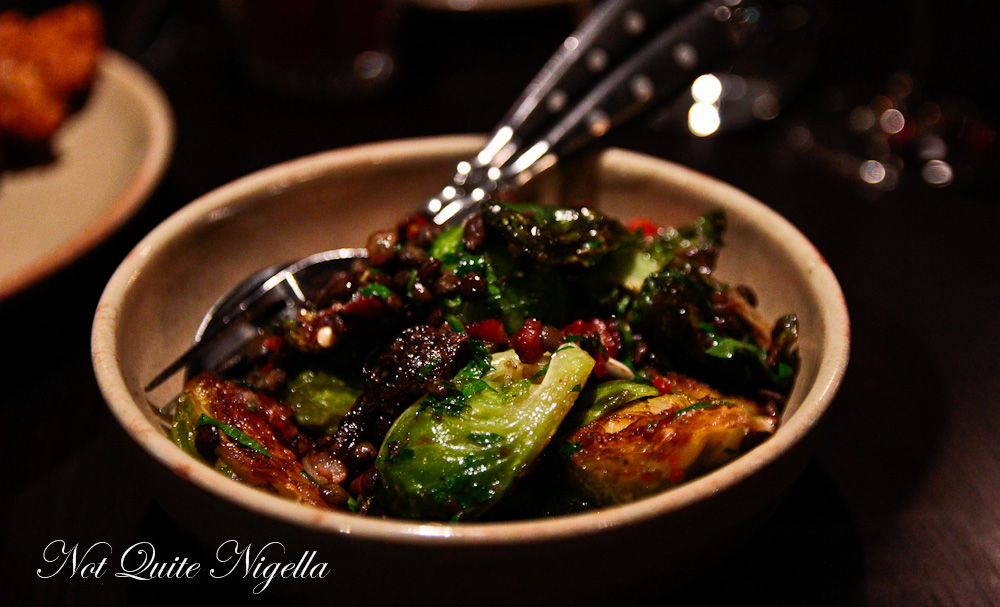 We ordered two sides because two mains didn't have accompaniments. The Brussels sprouts are split and crispy fried and come with a scattering of blue lentils, speck and the mild fire of fermented chilli. I go back for these addictive little sprouts again and again. 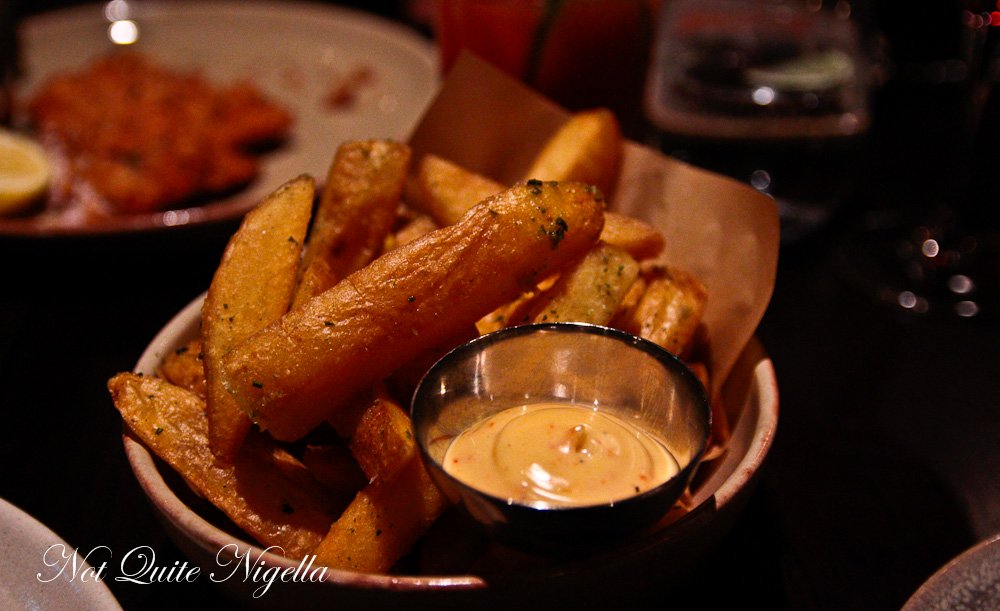 Equally hard to put down are the golden hand cut chips that are crisp on the outside and fluffy in the centre. They come with rosemary salt and an aioli that tastes like chilli anchovy. 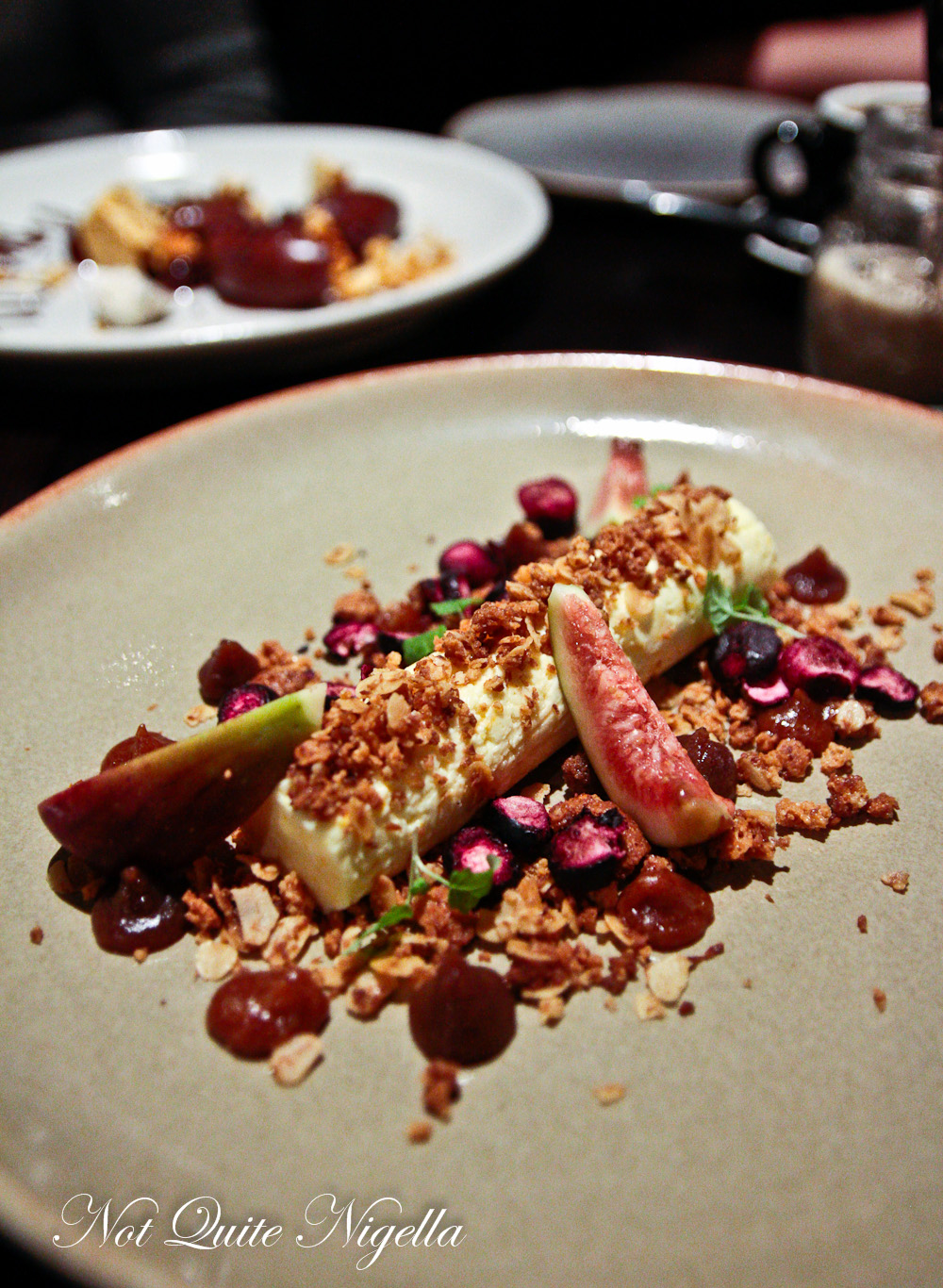 I must admit that the desserts didn't sound that exciting and I was hoping that they would have bacon in at least one of them (bacon maple ice cream anyone?) but we share all three sweet choices. They're actually quite good and the cheesecake is a log of light orange cheesecake, freeze dried blueberries, salted caramel dabs, figs and a crunchy, nutty toasted muesli. 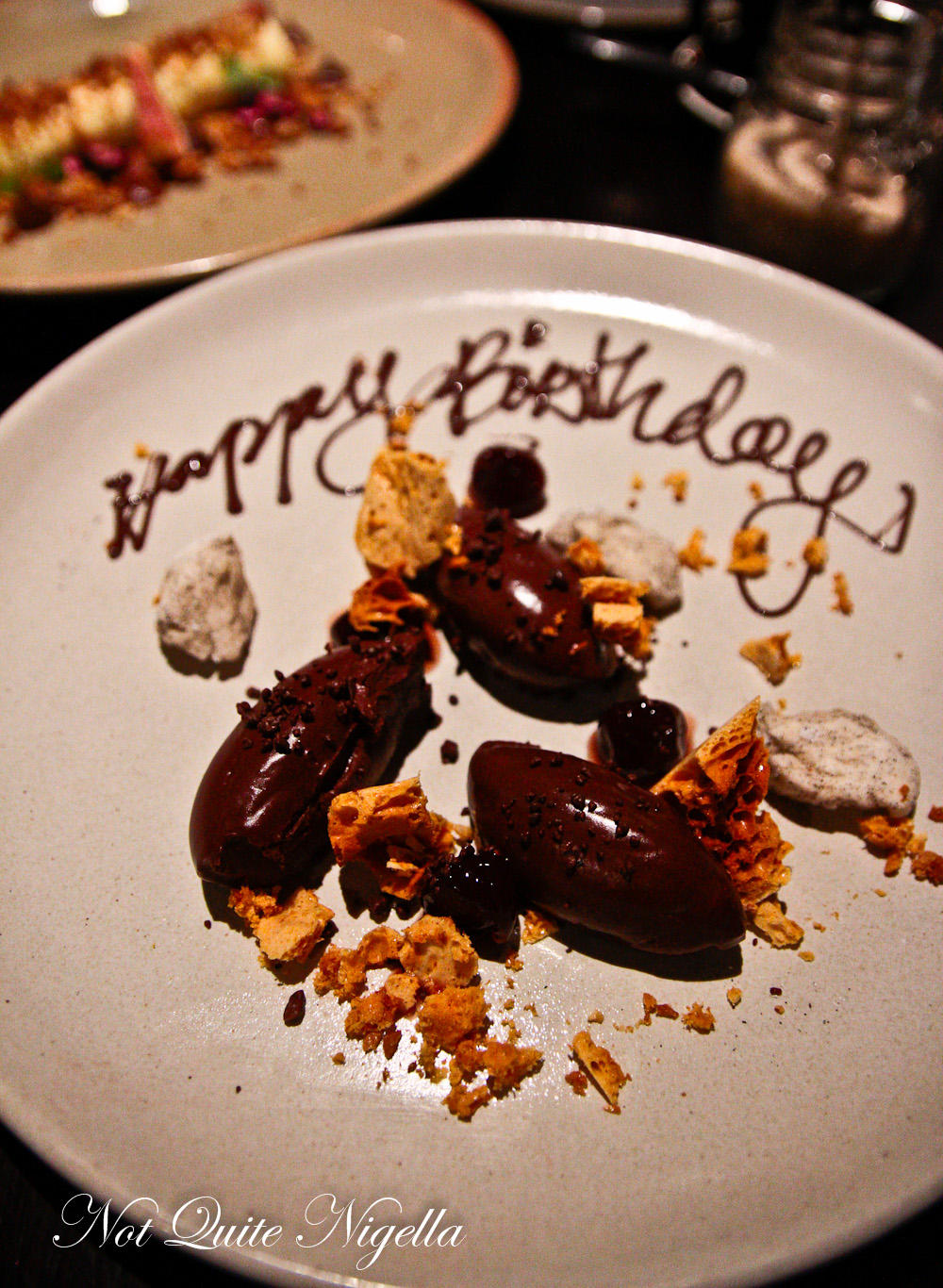 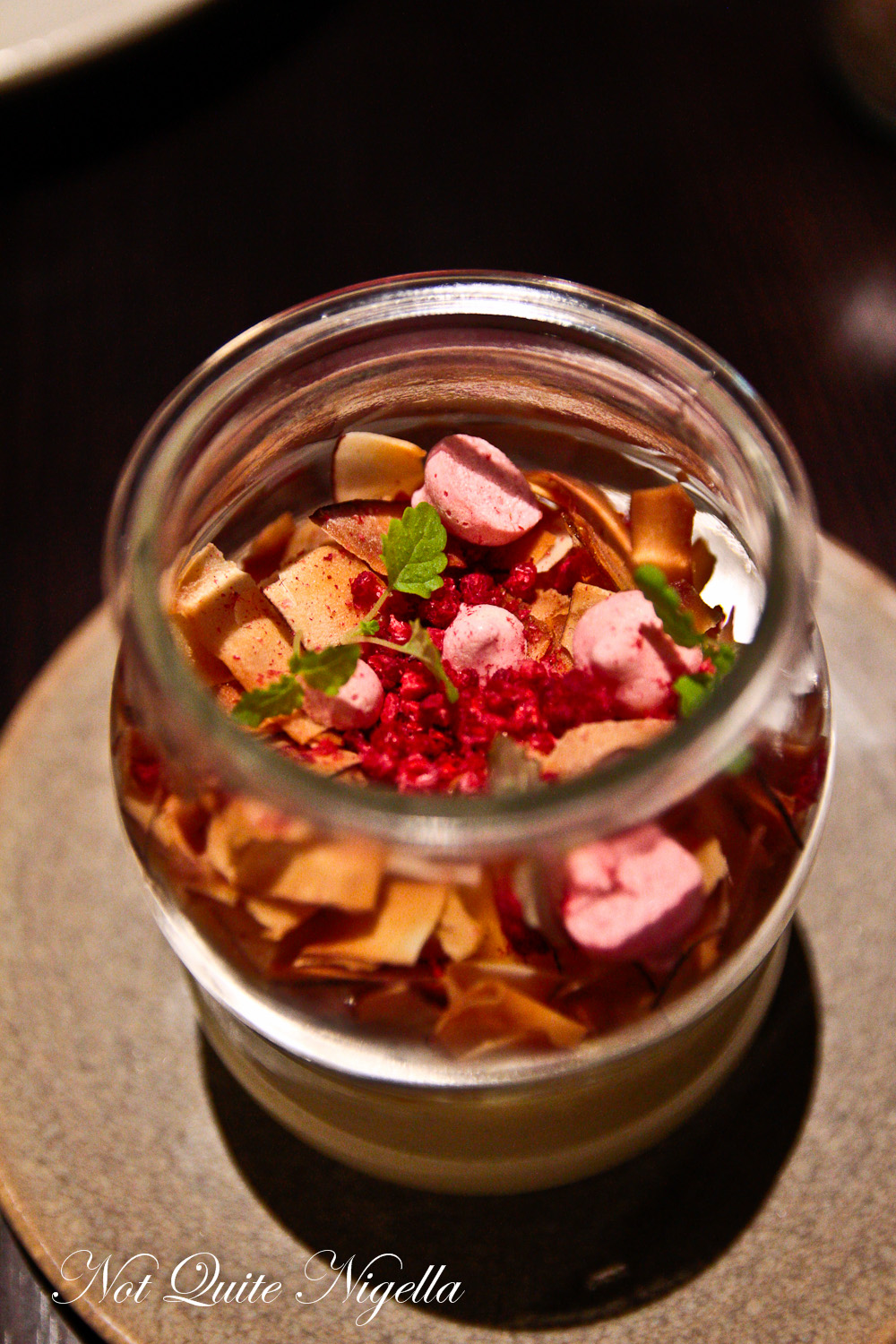 The unassuming brulee however is our favourite. It's a layer of very light and liquid vanilla creme topped with droplets of raspberry meringue, and toasted, candied coconut which shatter in the mouth. The crunchy coconut gives the creme a similar effect to a toffee layer where one doesn't appear here. And suddenly an all pork meal seems entirely doable again.

So tell me Dear Reader, would you eat all pork if you ate here or would you need another meat to break up the pattern? 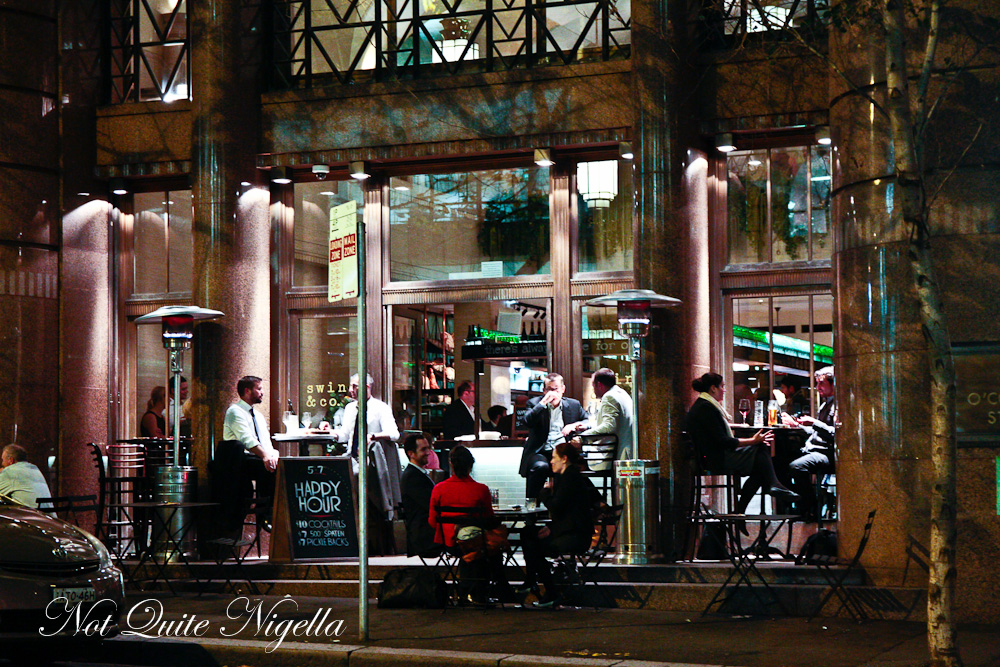