Let It Reign At Prince Of York, Sydney CBD 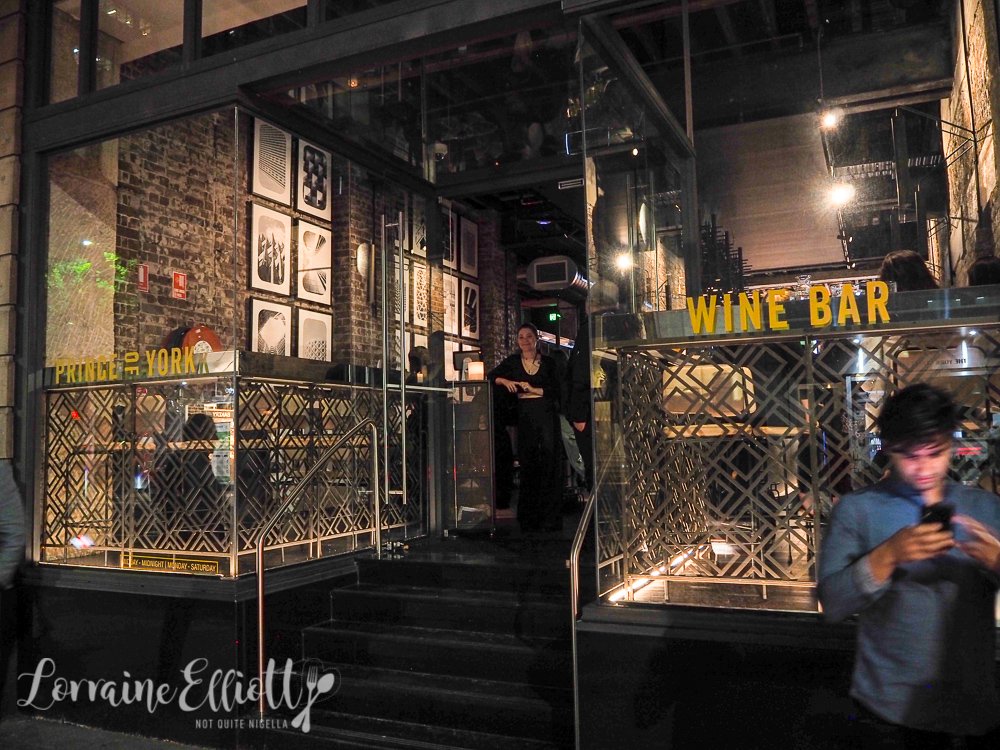 Prince of York is a new bar and eatery on York Street in the CBD. Formerly a bank site, the 150 year old building has transformed into a multi tier space. At night there are dim lights, pumping 80's hits (but not so loud you can't hear yourselves) and an eatery with a bit more than bar menu food as well as a basement bar below. 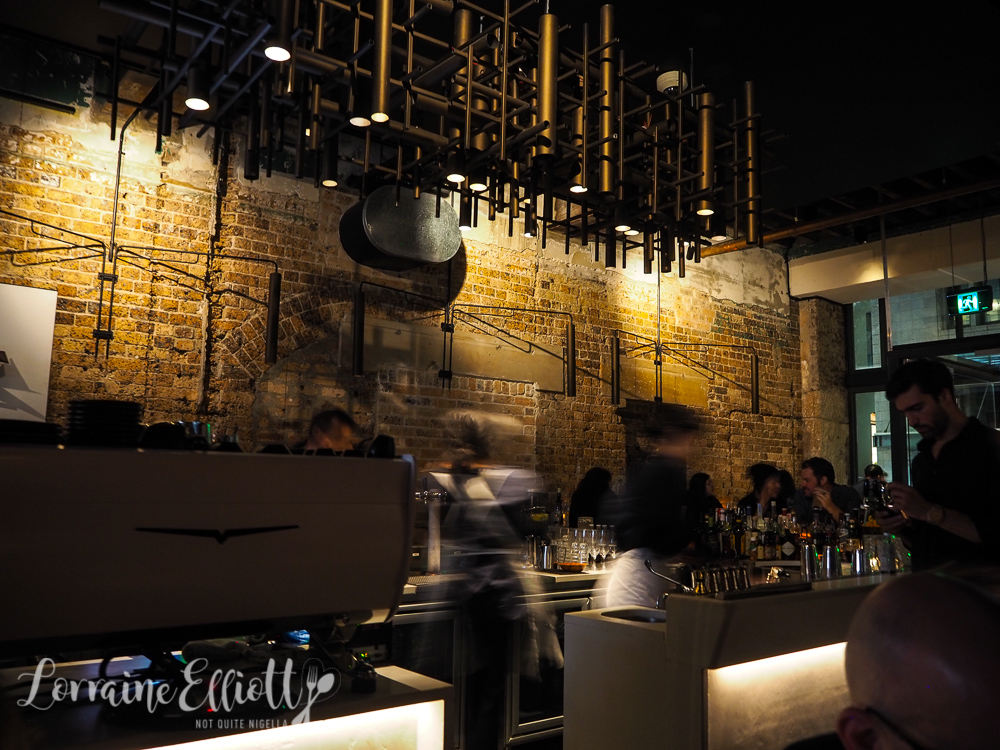 "What an asshole," says Monica striding in and taking a seat. She's talking about the doorman at Prince of York. It wasn't a great first impression of the three week old bar on York Street.

Prince of York is set on three levels. We have a table on the left hand side of the ground floor eatery that stretches out over two levels (tip: the second level is quieter). An 80's and 90's soundtrack pumps from the speakers and I could have sworn that they had connected to my Spotify list when a dozen of my favourites play in a row. 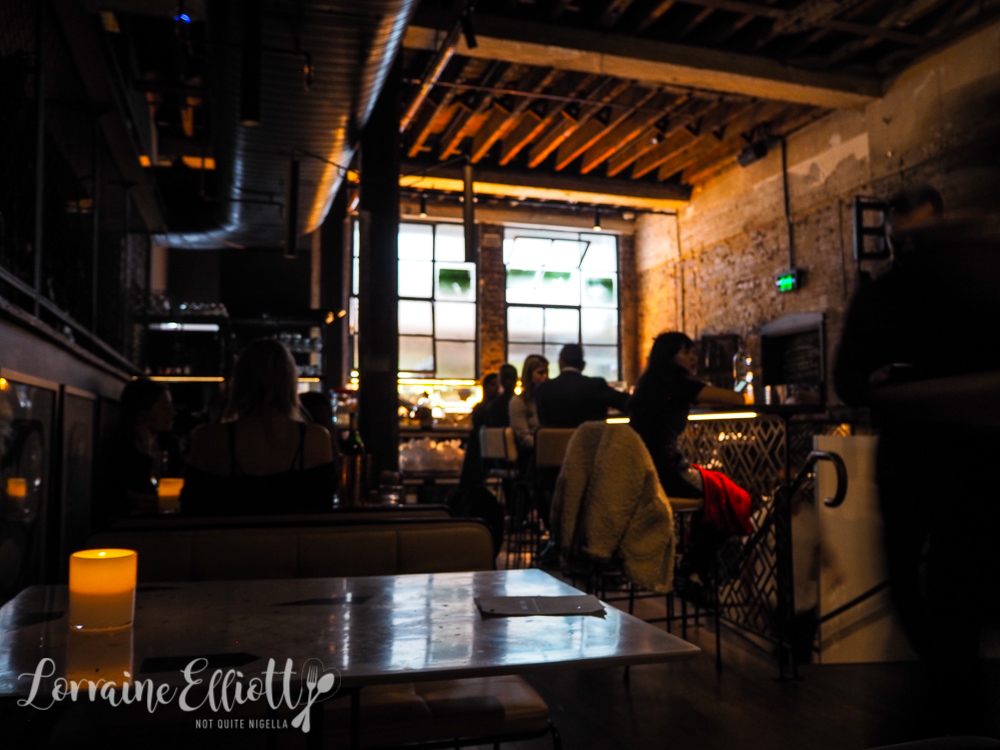 It's an after work crowd as it is a Friday night. The menu reads with a strong Italian influence but with some other additions and there's a separate menu for antipasti with cured meats, tinned seafood and cheeses. The bone marrow toastie with veal tartare was pretty much the reason why we came. Monica saw it on the internet and wanted to eat it. The head chef is Sam Bull from Icebergs and North Bondi Italian. Service is great - friendly and accommodating and nothing is ever too much trouble. 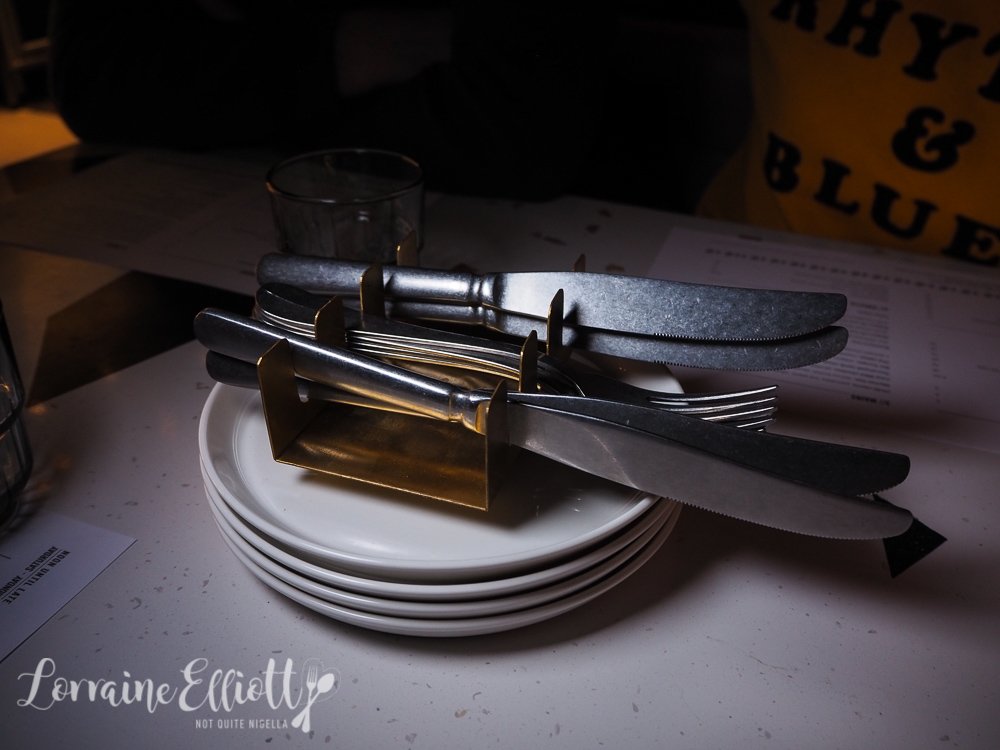 I once read a story about a New York restaurant that had sterling silver salt and pepper shakers on each table. They would keep a track of them by removing them after mains service but if a customer happened to pocket them they'd discreetly add them to the bill. Nobody questioned the charge of "$150 Salt and Pepper Shakers". I think of the small cutlery rack on the table. Monica distributes the cutlery to everyone and wonders what to do with the rack. "Does this just stay here on the table?" she asks and our waiter smiles and says "No, I'll take it now" he says scooping it up. 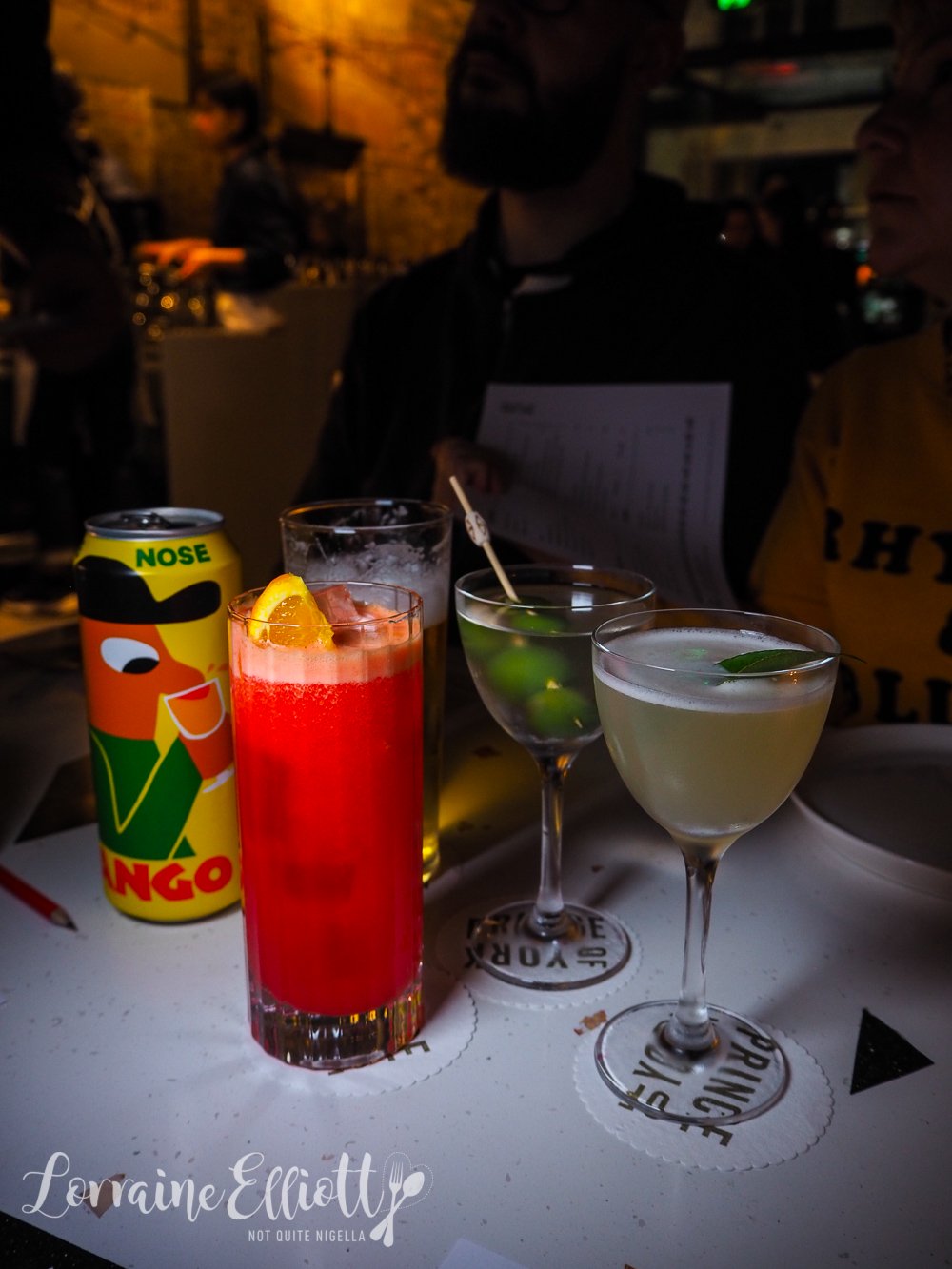 We order drinks. It's a Sober Man's Garibaldi for Mr NQN that has Monin bitters and poor man's orange and it's fantastically bitter. For me, it's a dainty coupe of The Cure with vodka, orange wine, lemon myrtle, citrus and pineapple which I love. Monica orders a dirty martini. "I want it dirrrrty," pink haired Monica purrs. She's wearing a mini skirt and heels and is defying the winter weather out there. Gotta love this girl. Beer brewer Marco orders a Mikkeller mango beer. 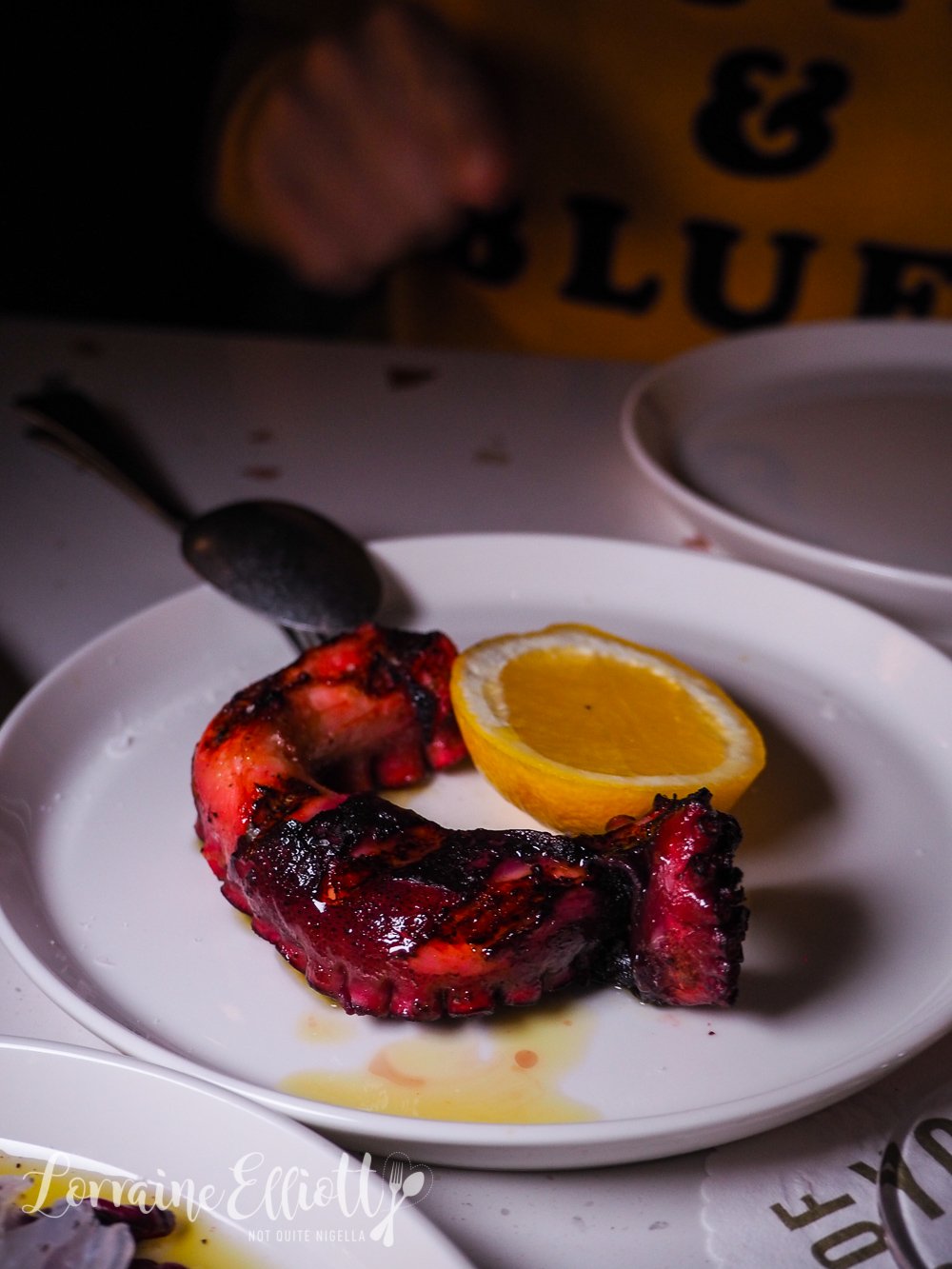 The food comes out in a timely manner with all our entrees arriving at the same time. I have to admit that I was a little surprised at the simplicity of the octopus. It was said to be smoked but it was more char from the grill. 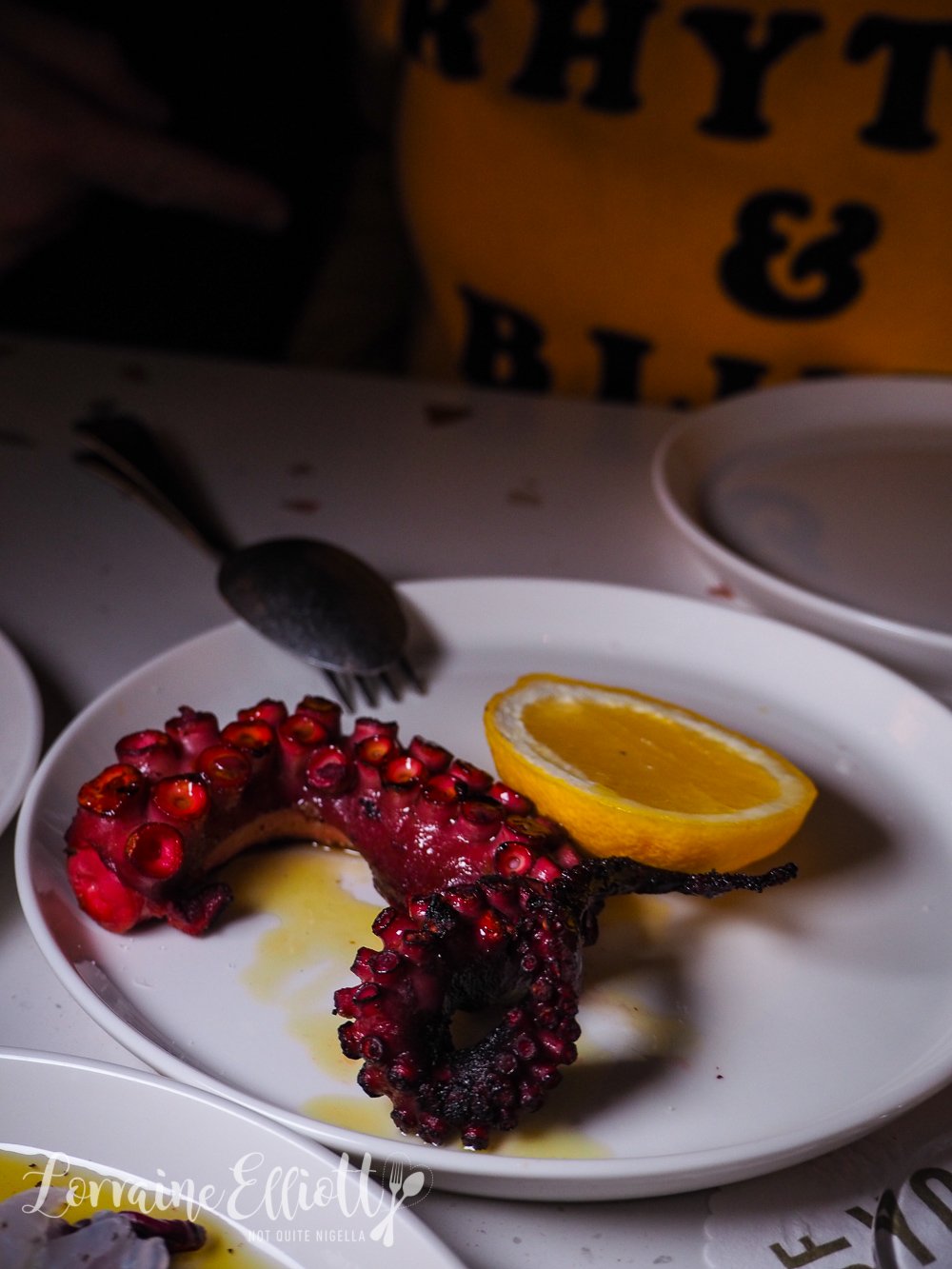 I'm not sure what Greek style means in terms of octopus, I believe it just means simply grilled with lemon. Oh and Monica had to flip it over (she's a chef) to show off the suckers so that it would look more appealing. 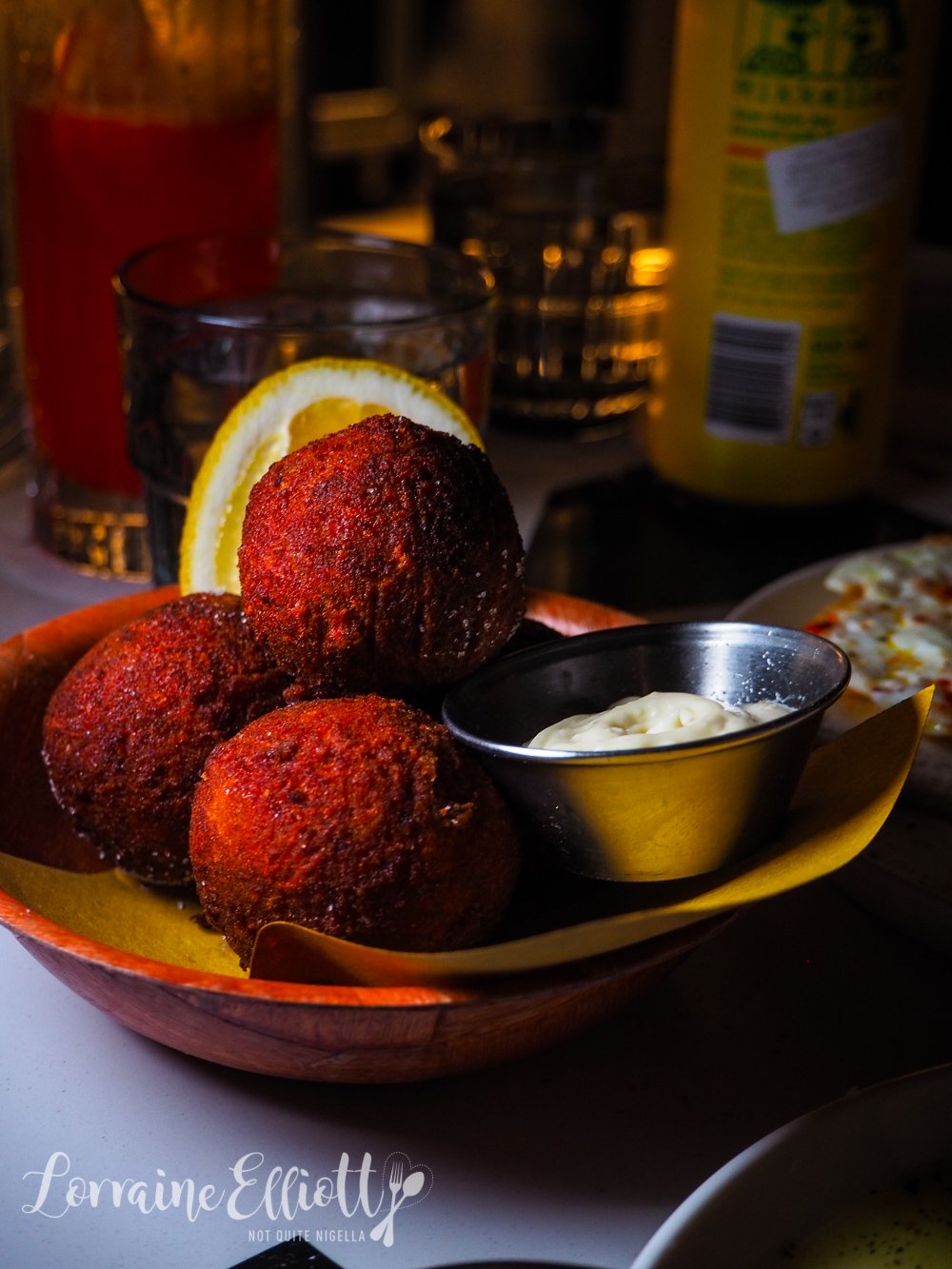 The arancini balls were a recommendation as they are popular here. I have to admit that while they are nice I don't think that it's that unusual or different from many arancini. 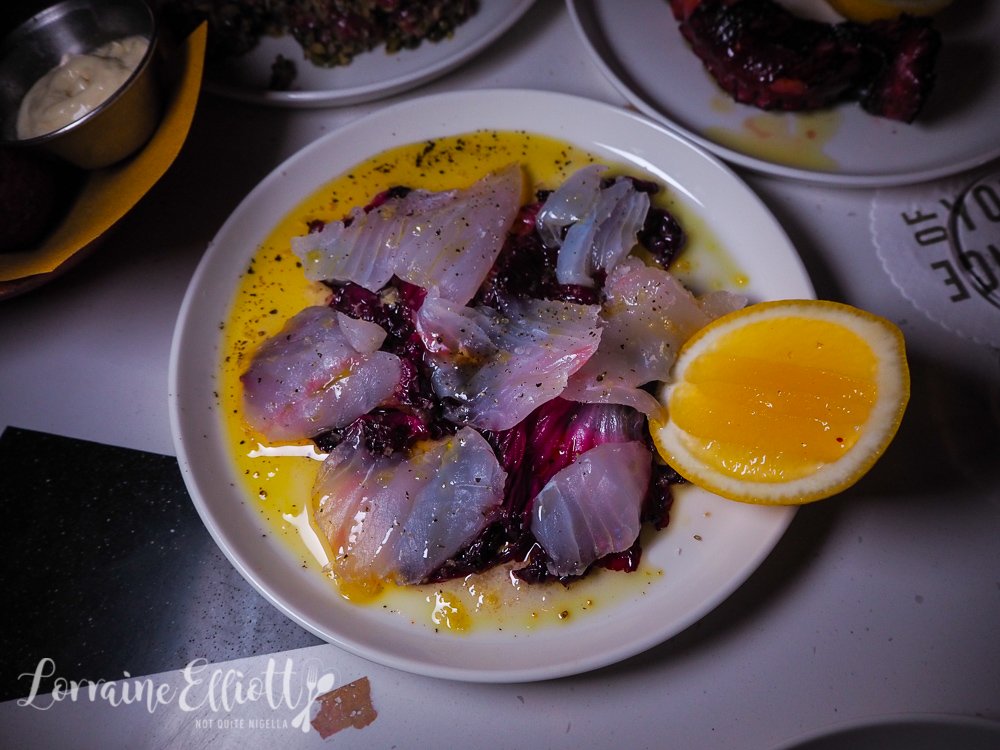 I usually like crudo as a fresh entree to lighten things up but I don't usually expect it to be my favourite dish. With gorgeous pickled radicchio (going to try this at home!) and excellent buttery extra virgin olive oil, this is my favourite entree. 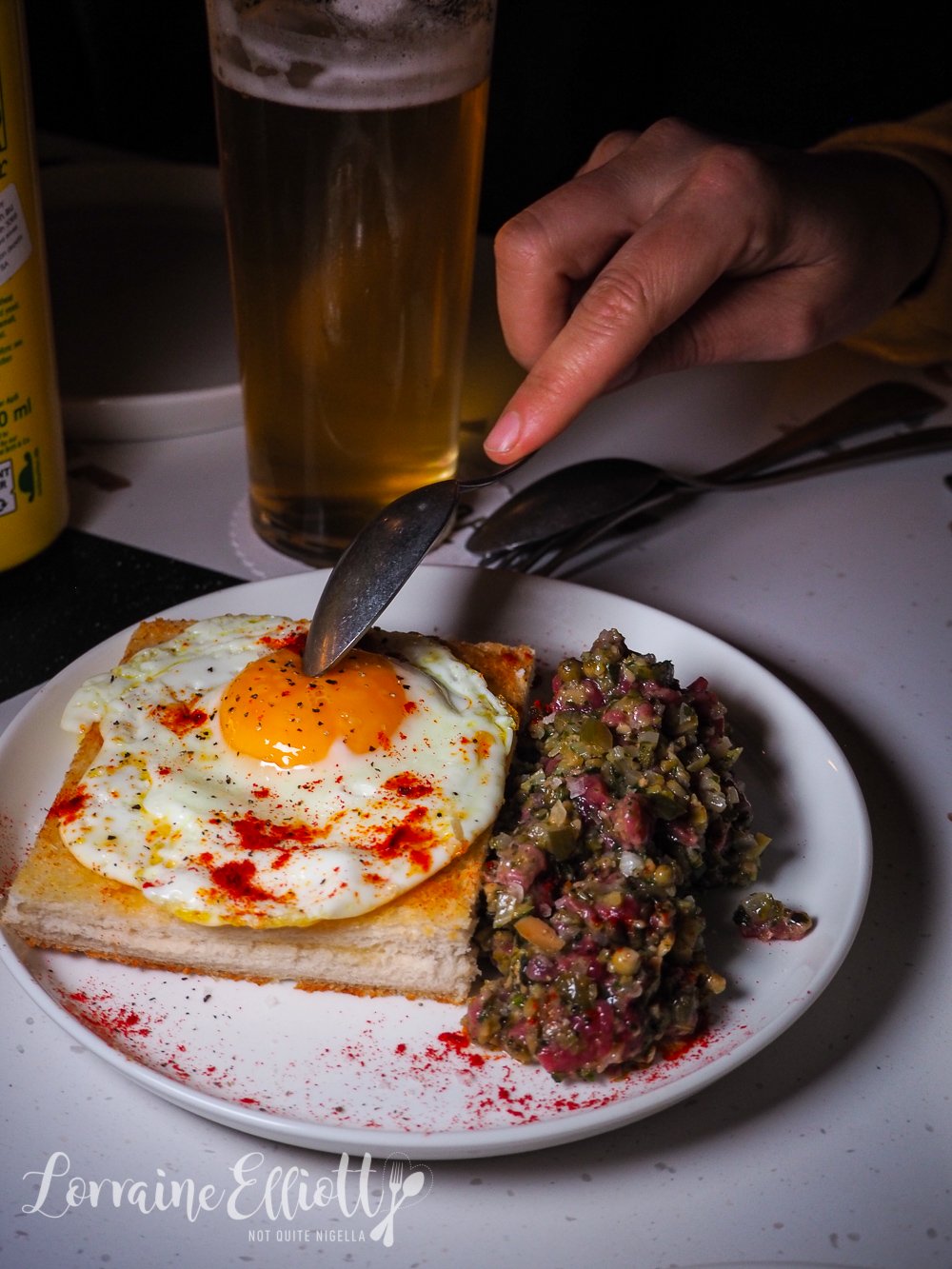 Then we come to the venison tartare. Monica did originally want to order two of these but she is dissuaded against this by the waiter as he says that it is very rich. It's easily portioned into four and he's right, it's indeed rich. It's a single slice of cheese toast with bone marrow and a venison tartare on the side which is well seasoned so that its piquancy balances the rich toastie. 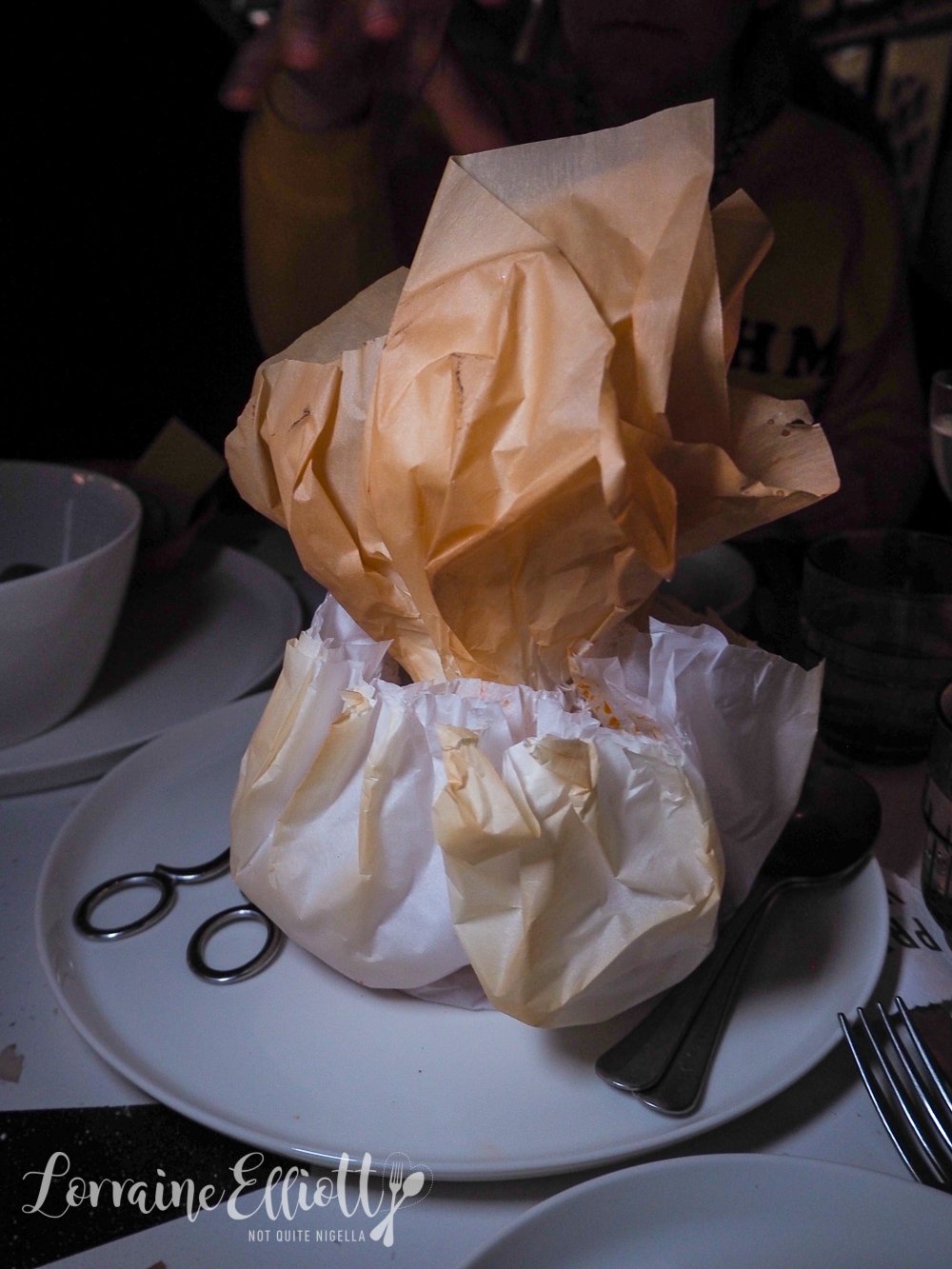 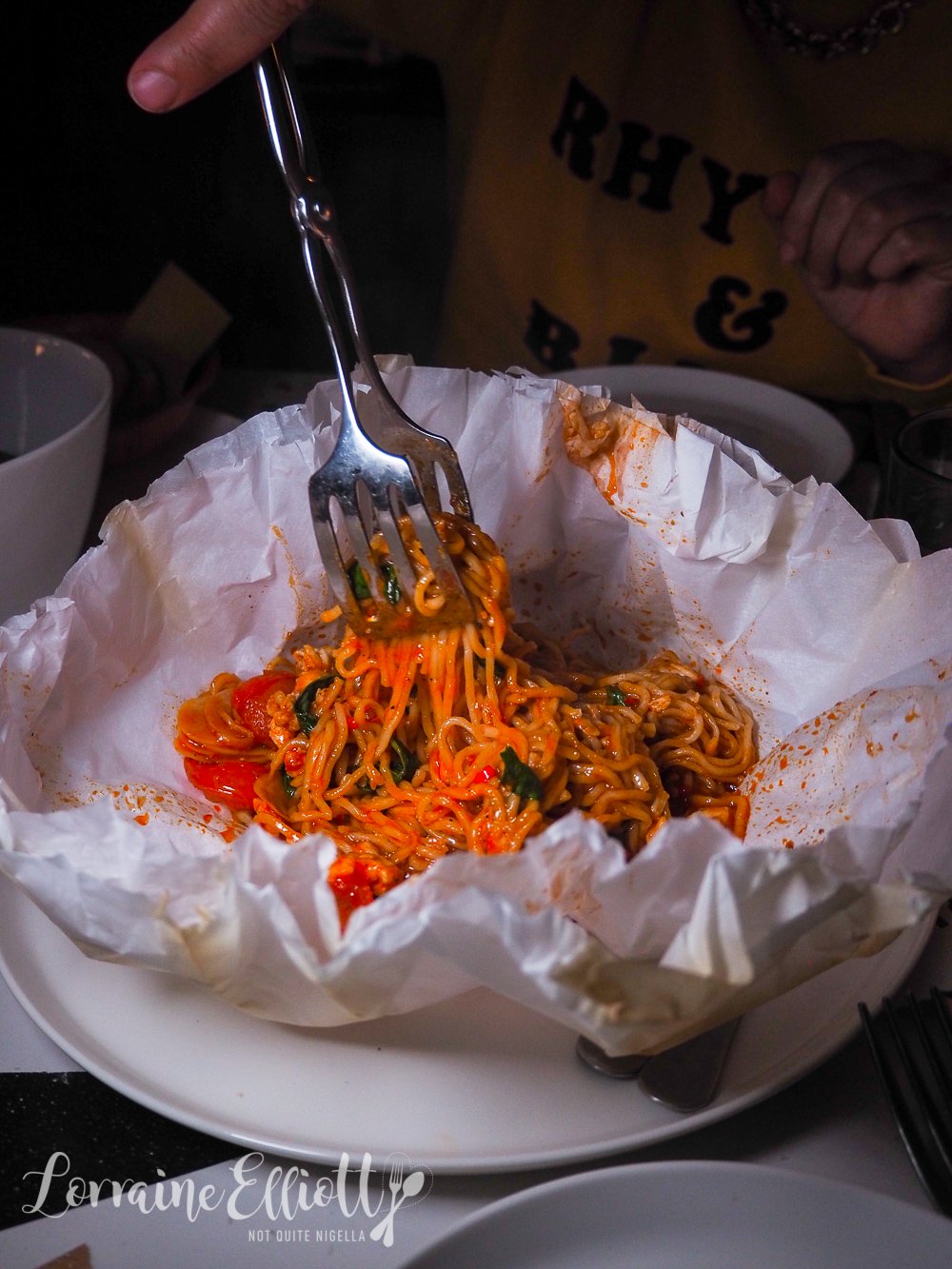 It's time for the mains and I was really looking forward to the crab in a bag having stalked their Instagram page. It's really more crab pasta in a bag as you get more pasta than crab. The pasta is a thin pasta and very, very soft in texture while the sauce tastes more of tomato than a seafood sauce. 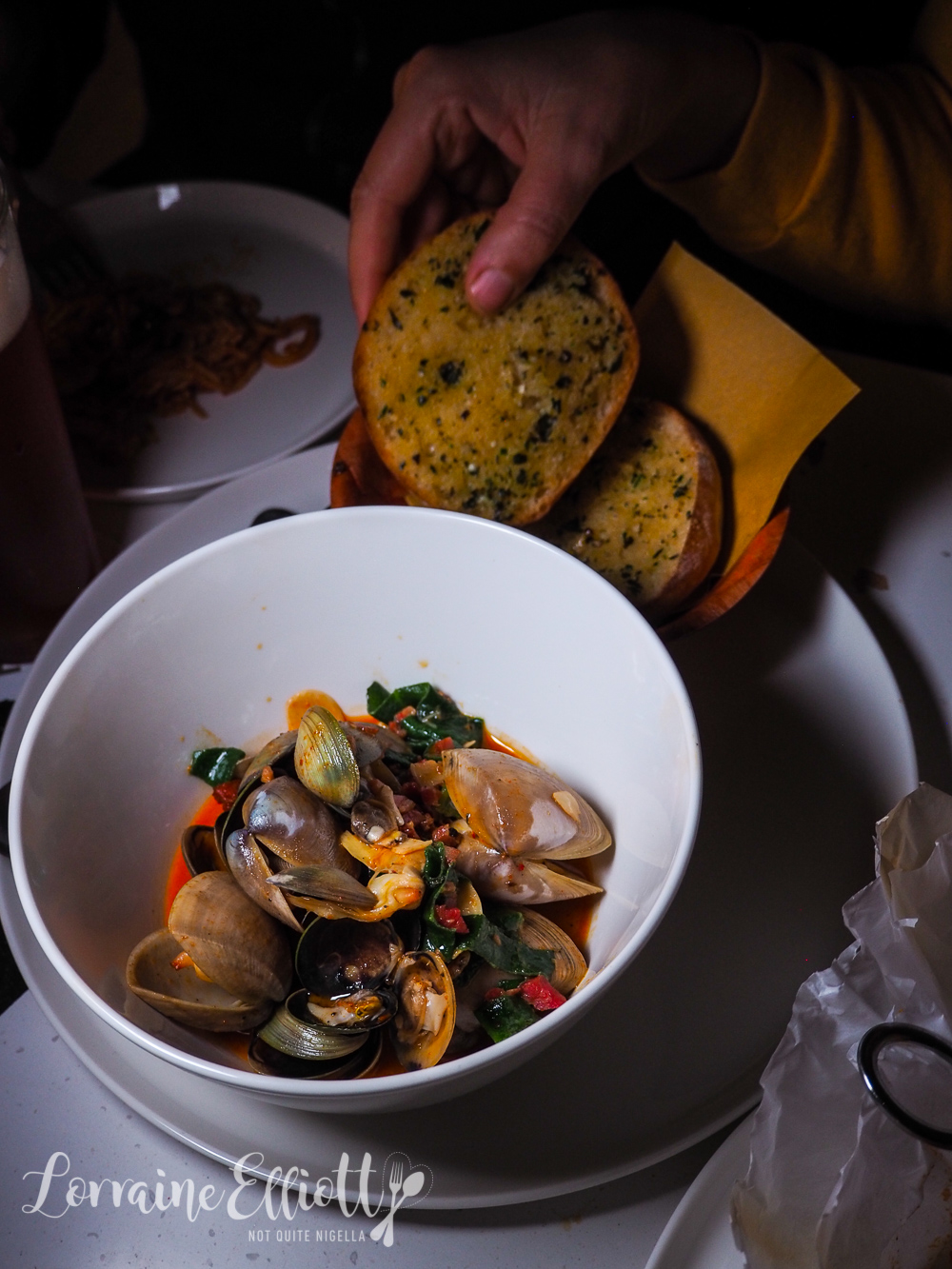 Everyone's favourite main is the clams casino with a split round of garlic bread. There's pancetta, ice plant (I'm just taking their word for these as you can't really see the food it's so dark) but I can definitely taste the spicy nduja in the sauce. The clams are succulent and well cooked and the bread is fantastic dipped in that flavoursome sauce. 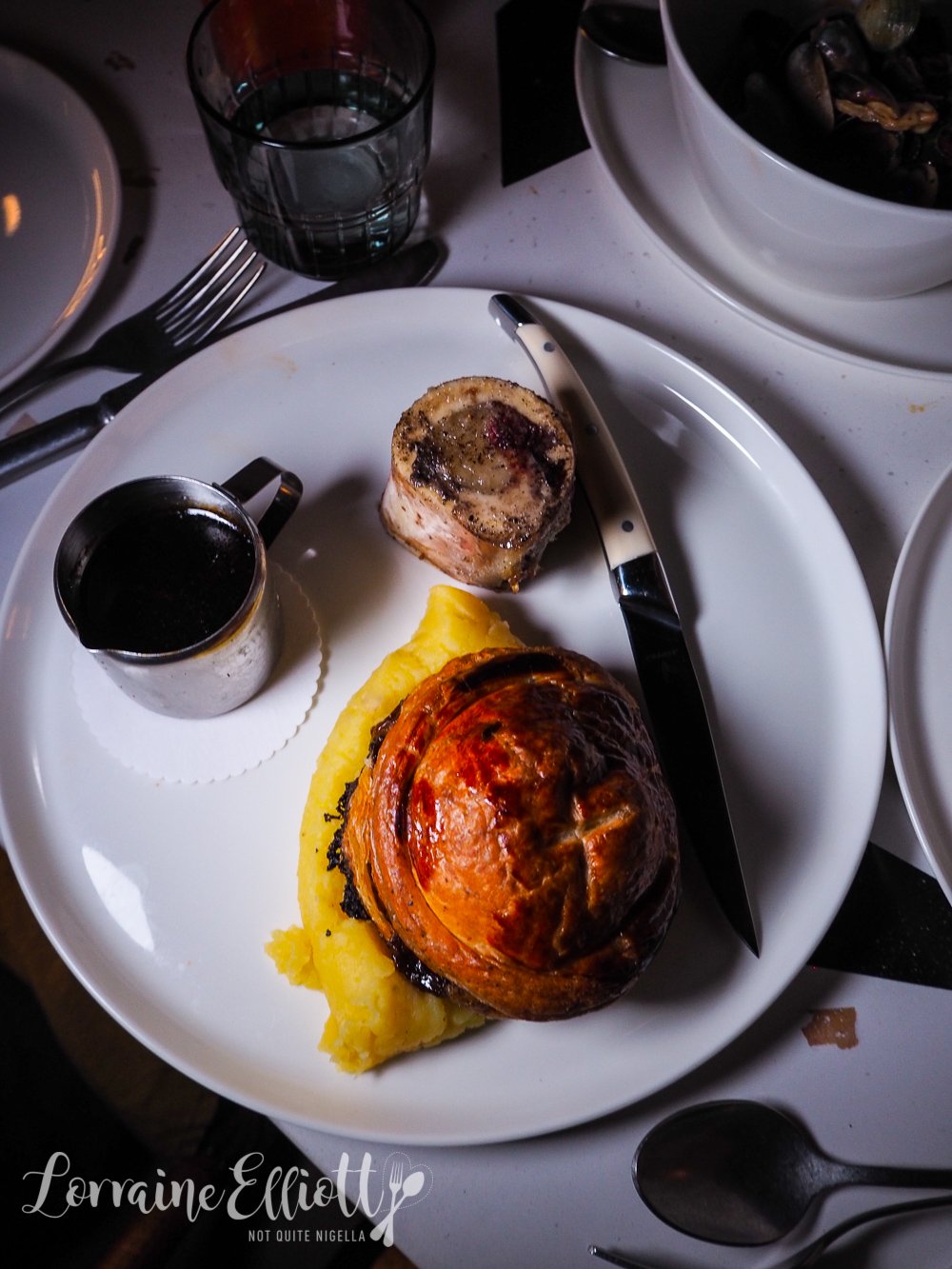 They explain that each day the butcher's cut is transformed into something new whether it be a steak or a pie. Today it's a pie with a buttery puff pastry, bed of mashed potato, wedge of rich bone marrow and an onion sauce. It's quite pricey for a pie and mash but it's good rainy day food. The only issue is that the onion sauce is on the strong and bitter side. I prefer a sweeter caramelisation of the onions. 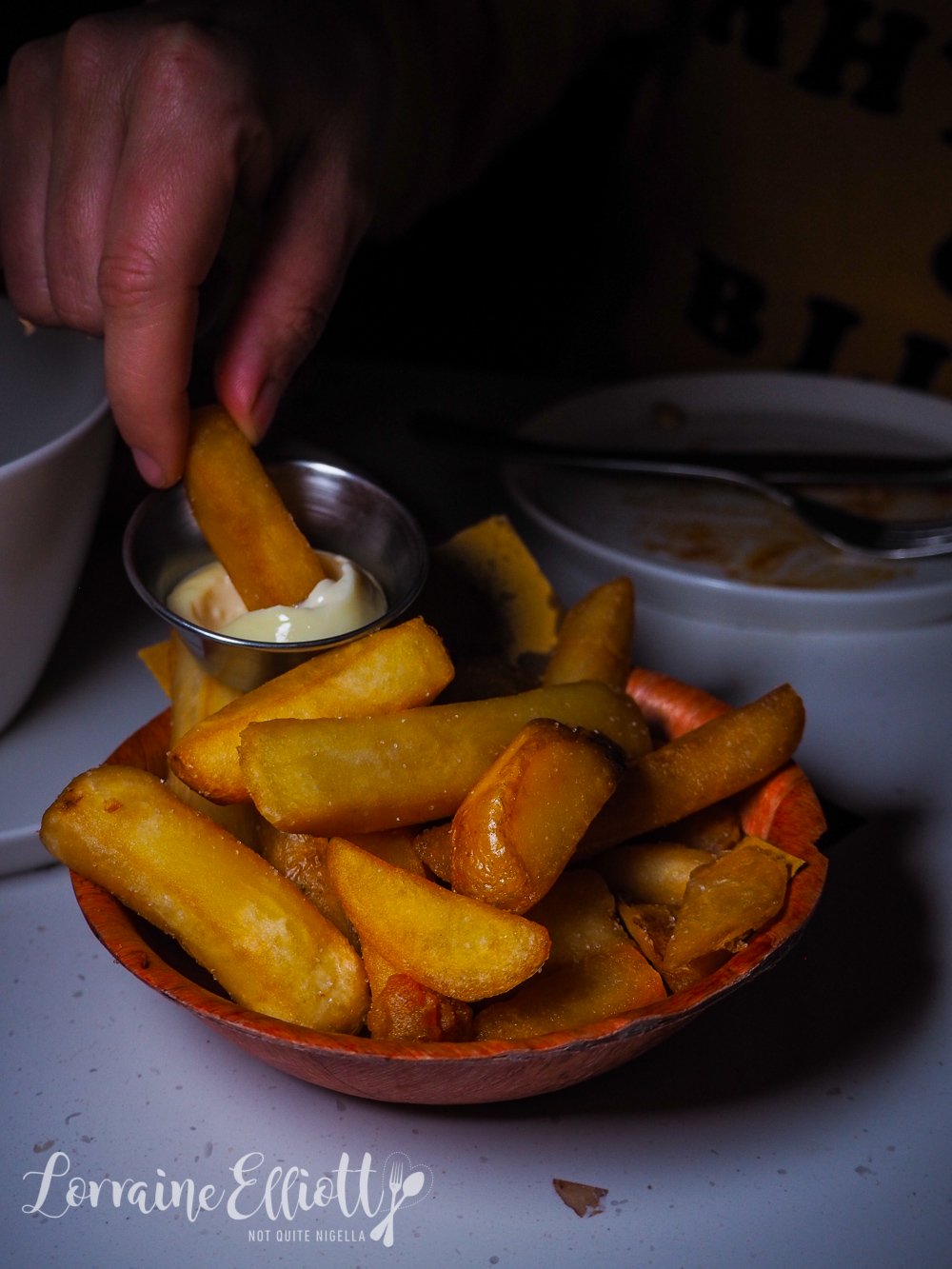 The fat chips are indeed fat with a thin, crispy layer on the outside and they come with aioli. I also dip these in the nduja clam sauce to soak up all the flavours while Monica cleverly dips a chip deep into the crevasse of the bone marrow. 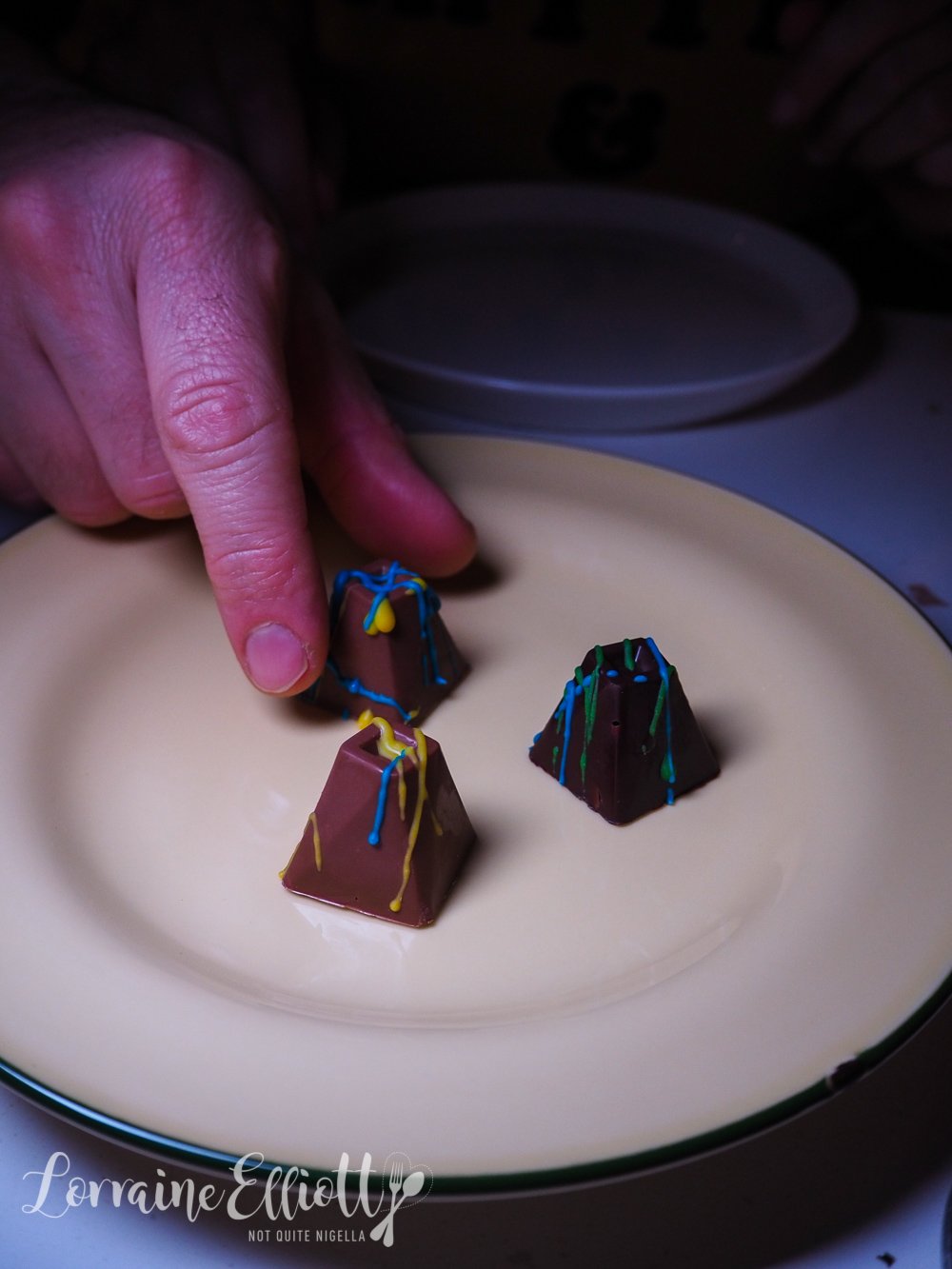 We have to ask, "What is a disco bon bon?" and they're cocktail filled truffles in a range of cocktails that changes regularly. Monica isn't such a fan of the chocolate and although ours is said to have a macadamia liqueur inside it tastes like coffee. 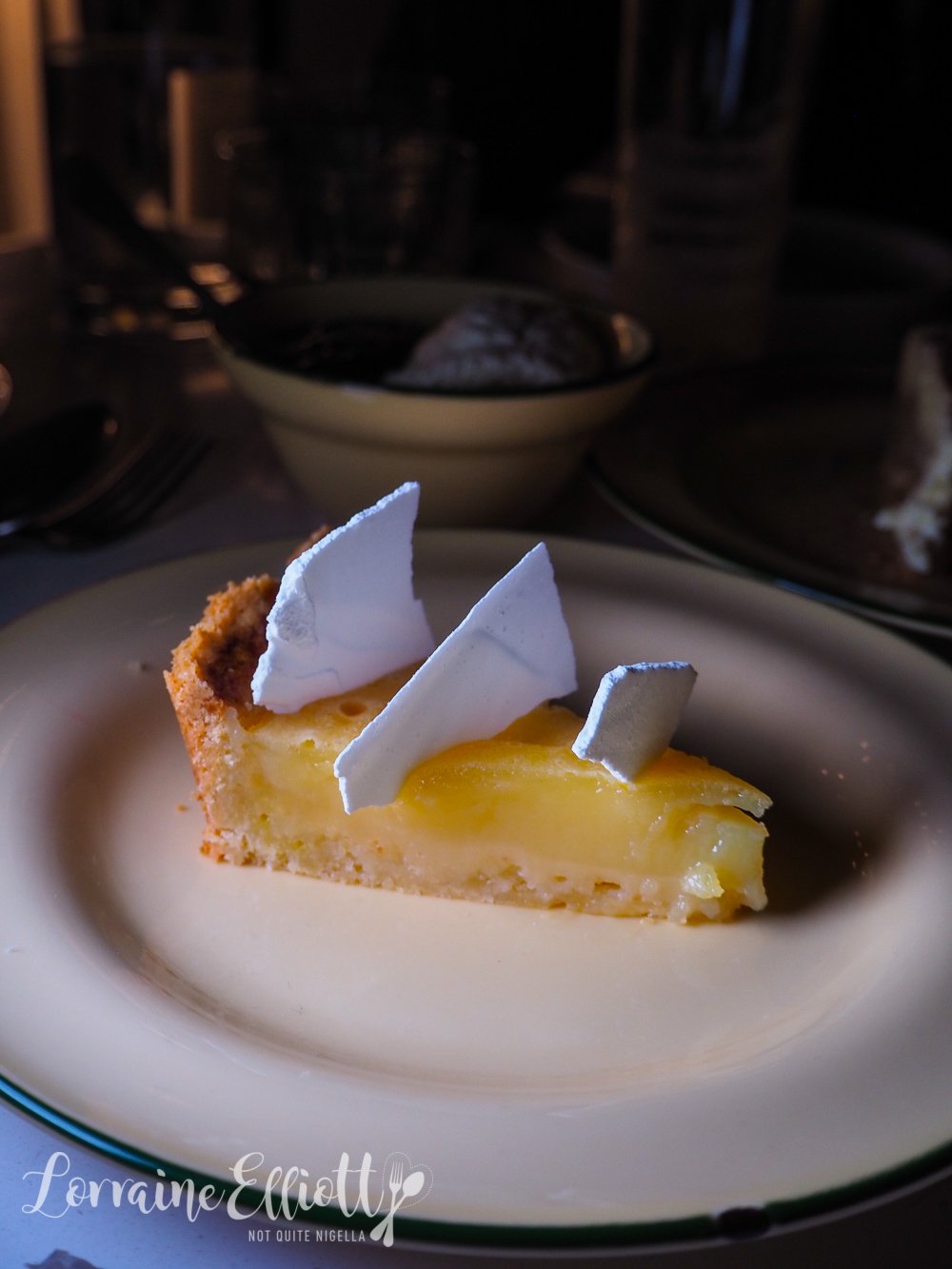 There are a few pies on offer: apple, strawberry cheesecake, lemon meringue and banoffee. The lemon meringue is actually quite tasty although there isn't the billowy layer of meringue that you might expect with a lemon meringue pie. 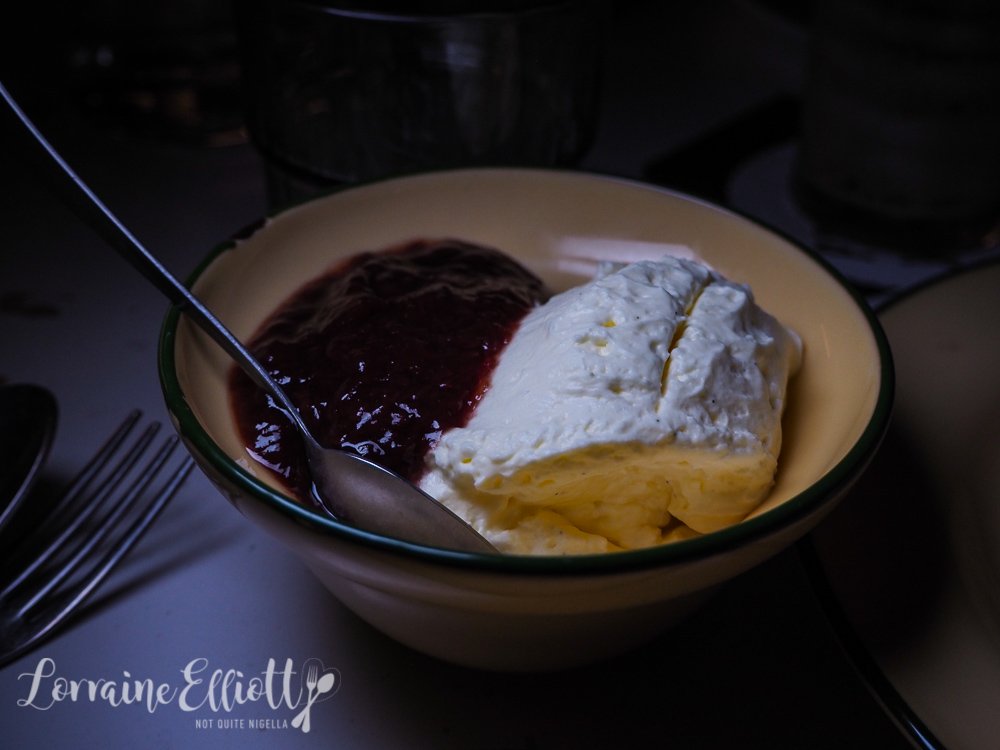 We don't really need the berry jam and cream and its appearance almost suggests as if we are expecting scones to arrive. 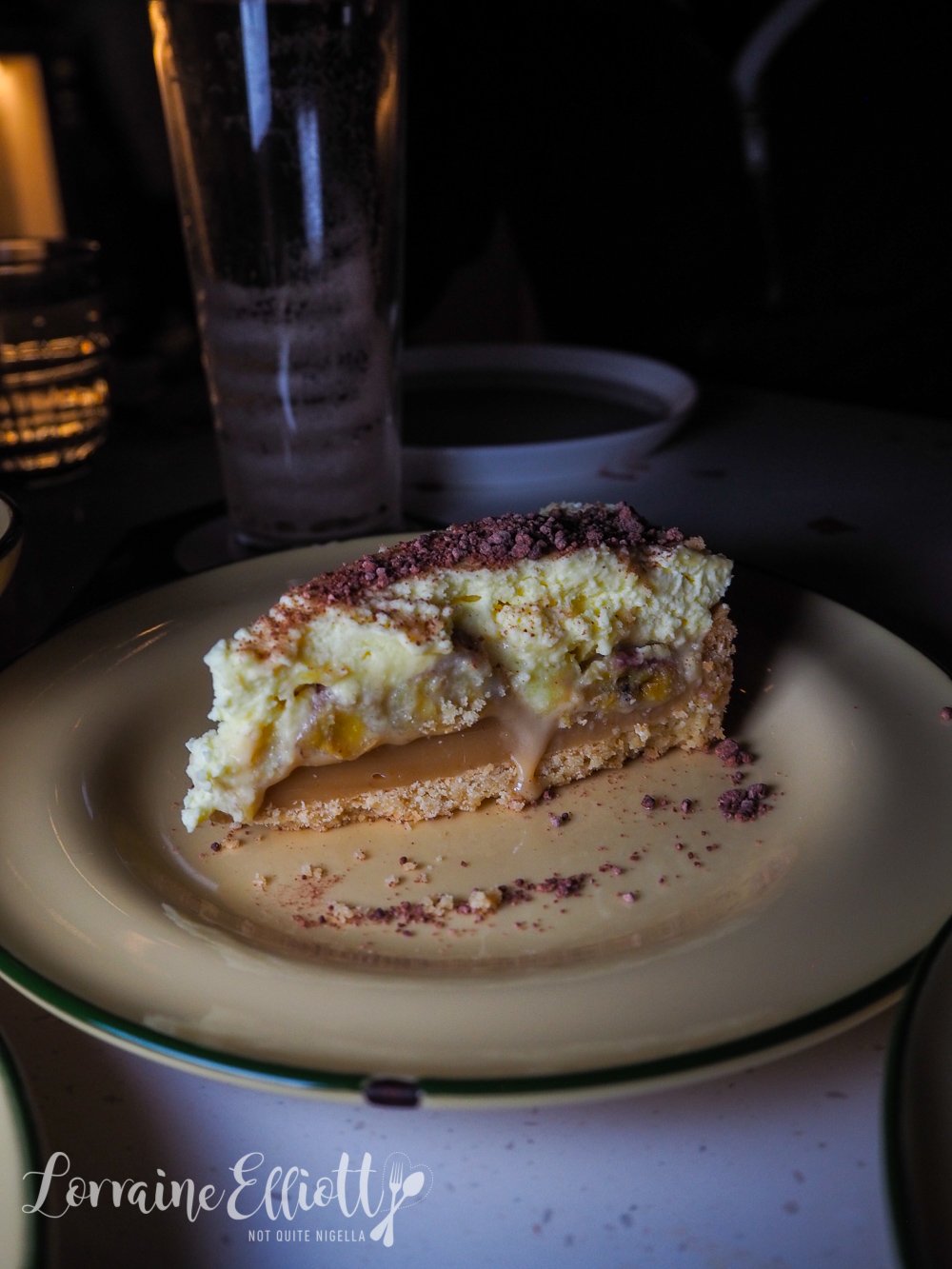 The banoffee pie is perplexing. The caramel toffee layer stuck to the pastry is so thick and sticky that it requires two hands and two forks to be able to wrench a bite sized piece out of it. There is just a light banana flavour and I don't know if there were banana slices as we really messed up the pie trying to cut it up. Taste wise it's nice but execution wise that thick toffee perhaps needs to be reworked (or perhaps serve it with a steak knife to scissor at it). 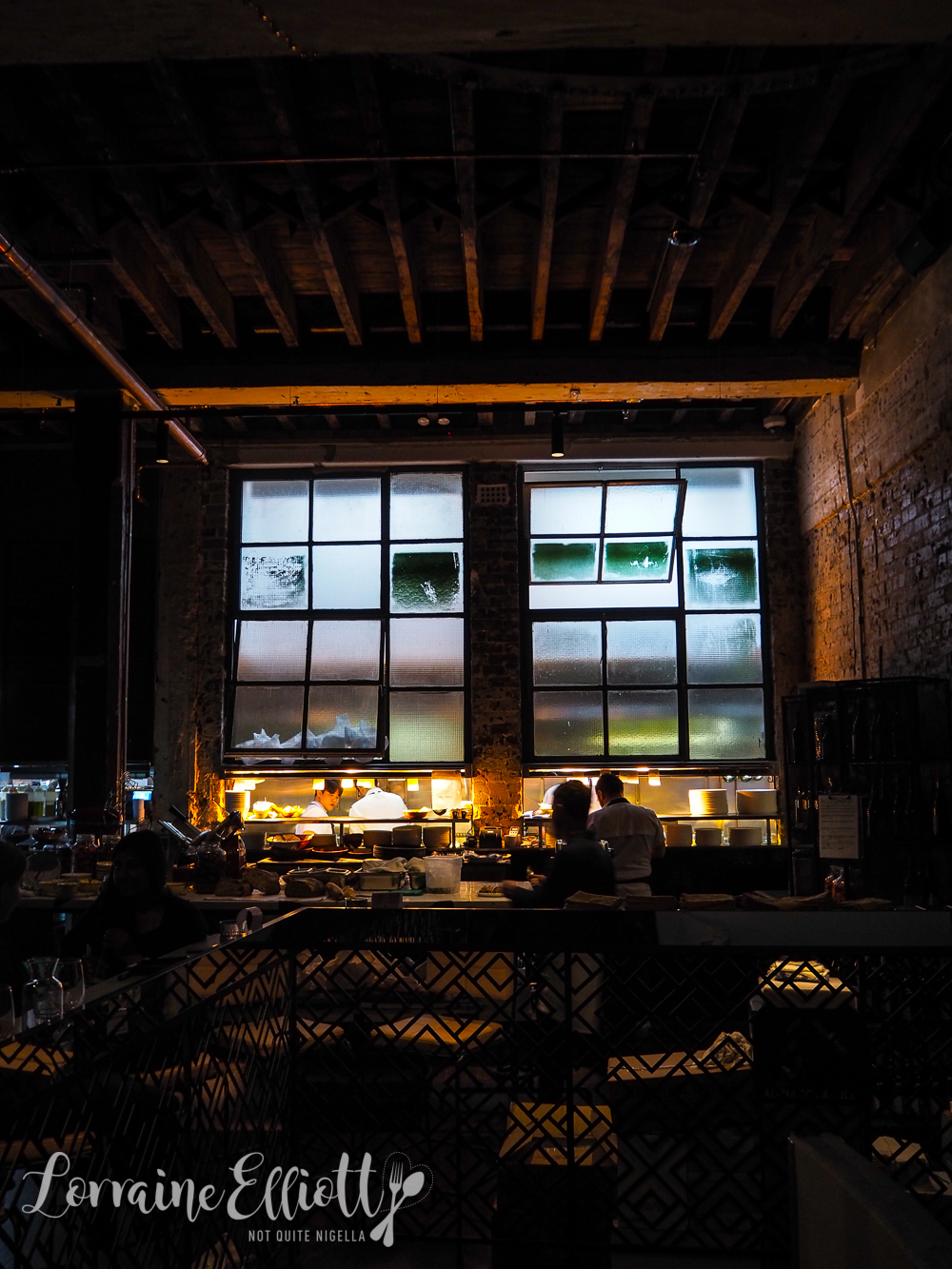 On the way out we stop downstairs to check out Pamela's said to be modelled on Studio 54. Online reviews promise dancing and a giant disco ball and so far write ups have honed in on this detail more than the food but at this hour, it just looks like a bar. Perhaps that's another night. Or another time.

So tell me Dear Reader, would you go dancing after your dinner? Have you ever pocketed salt and pepper shakers or other things from a restaurant and if so, what happened? 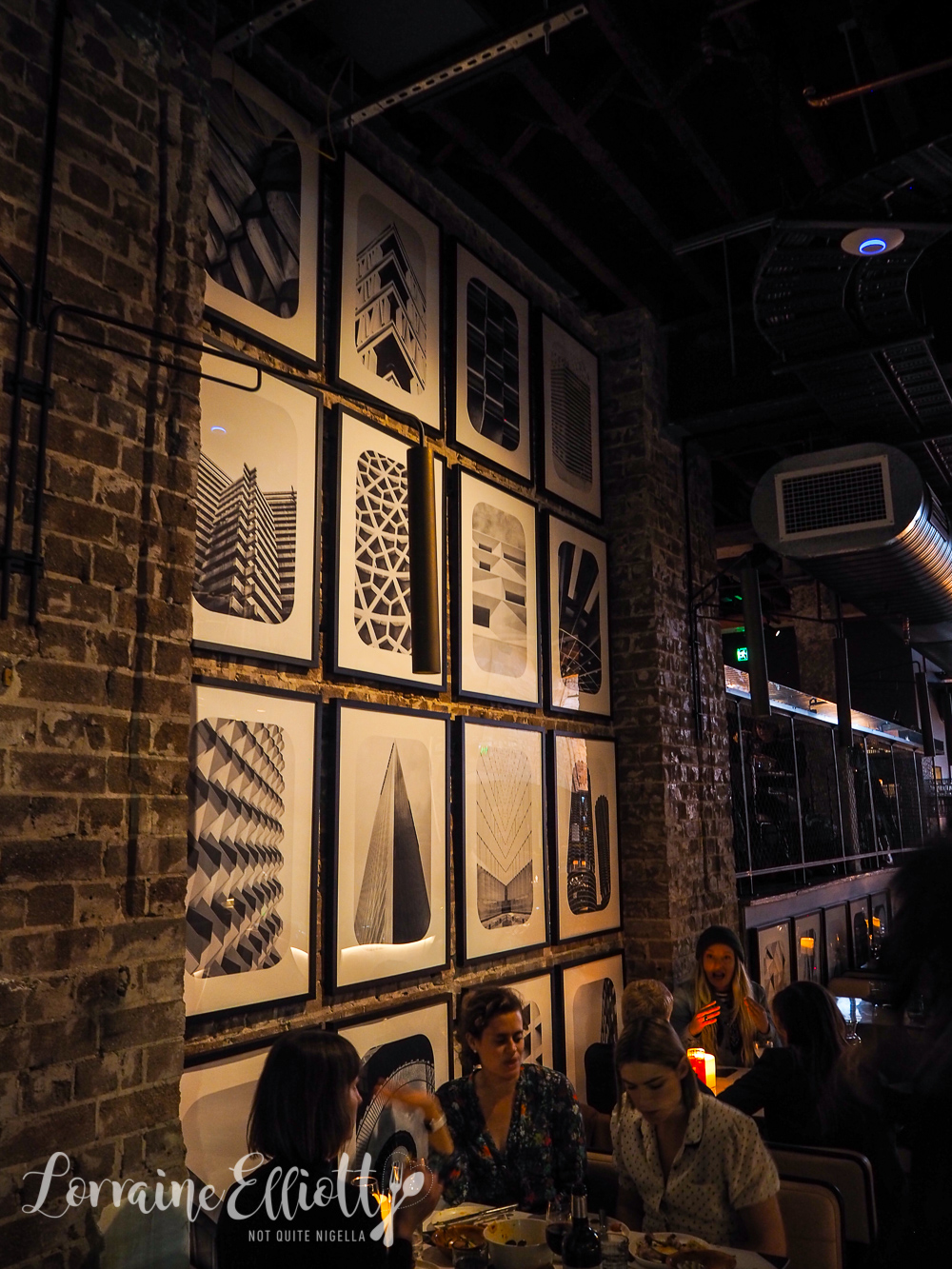