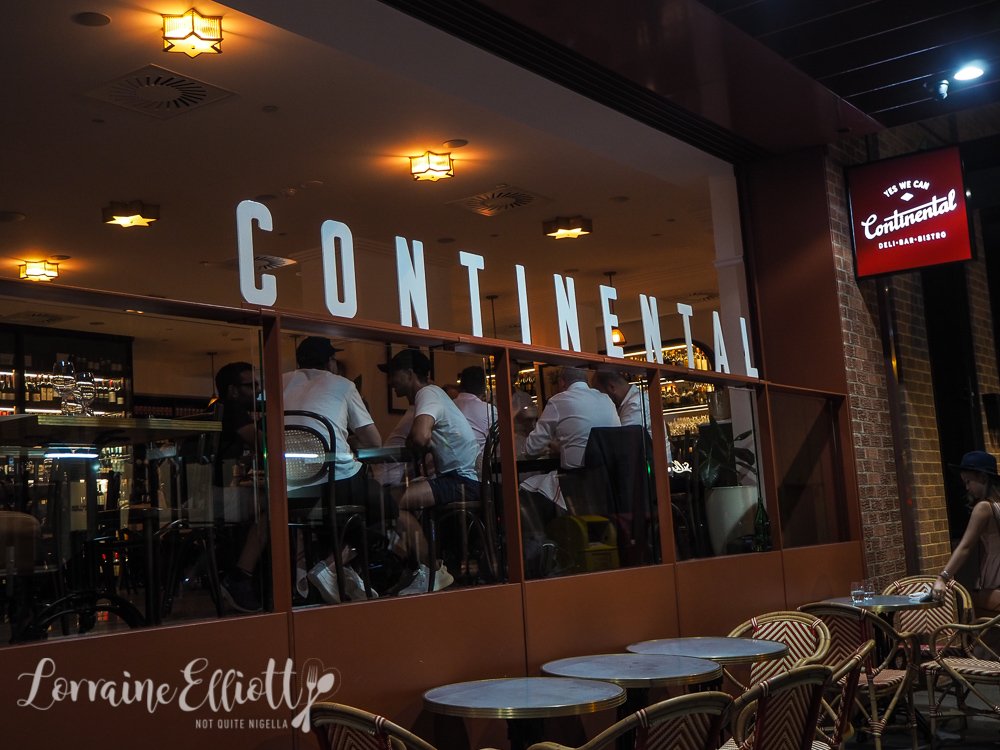 Newtown's Continental Deli has a new CBD sister branch to cater to the business crowd. With a different vibe to the Newtown one, Continental Deli CBD has a menu where you could carve out a meal of cheese, charcuterie and a 17 tinned items. There's also steak tartare, a juicy pork chop and an Italo Chinese spaghetti with salami XO and egg yolk. 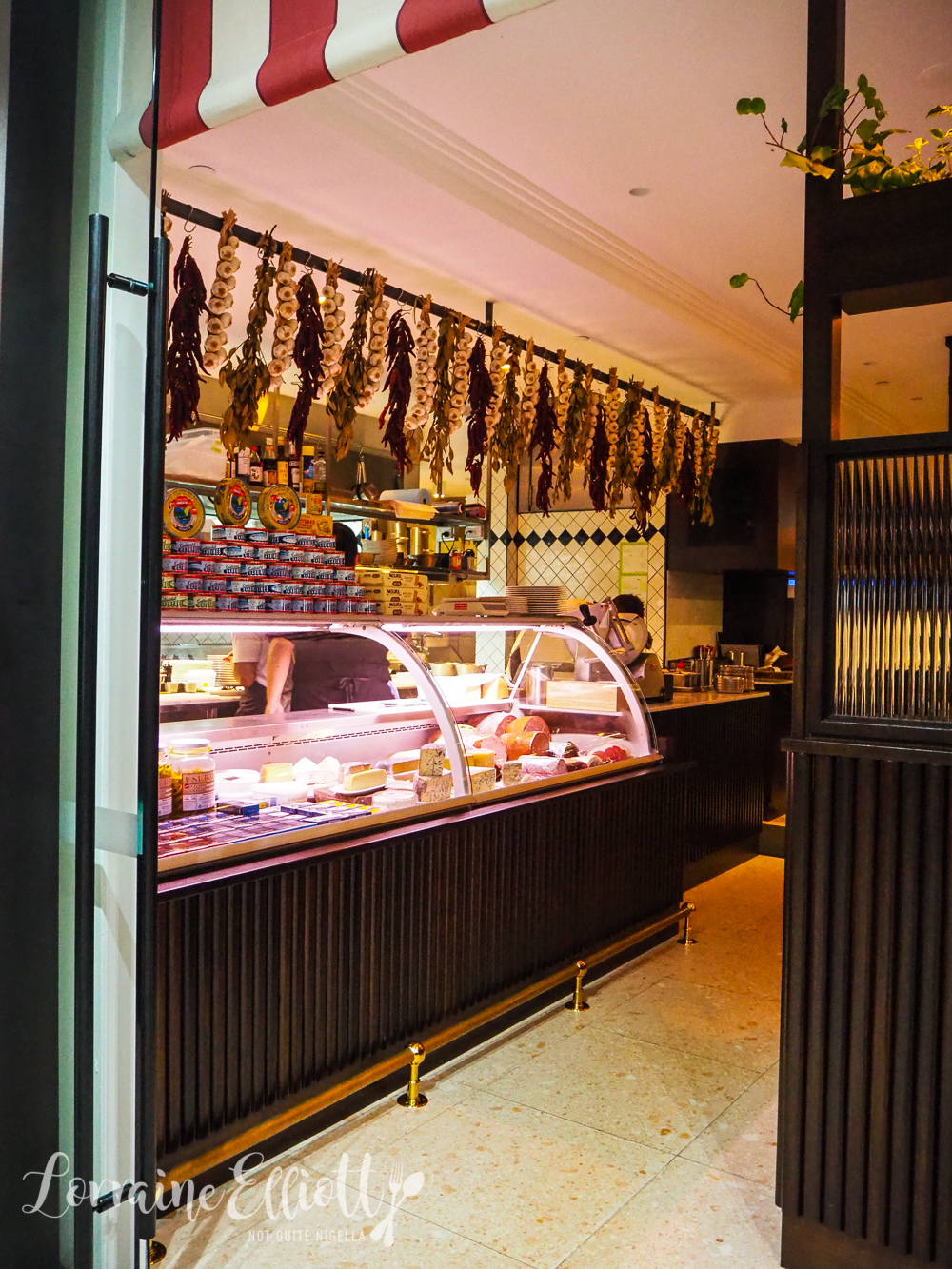 Because we had just spent the last couple of hours jumping about at Sugar Republic, Sophia and I needed somewhere to go. It was 7:30pm and we had a booking at 8pm so we were early. Our table isn't ready yet but they offer us a table outside. 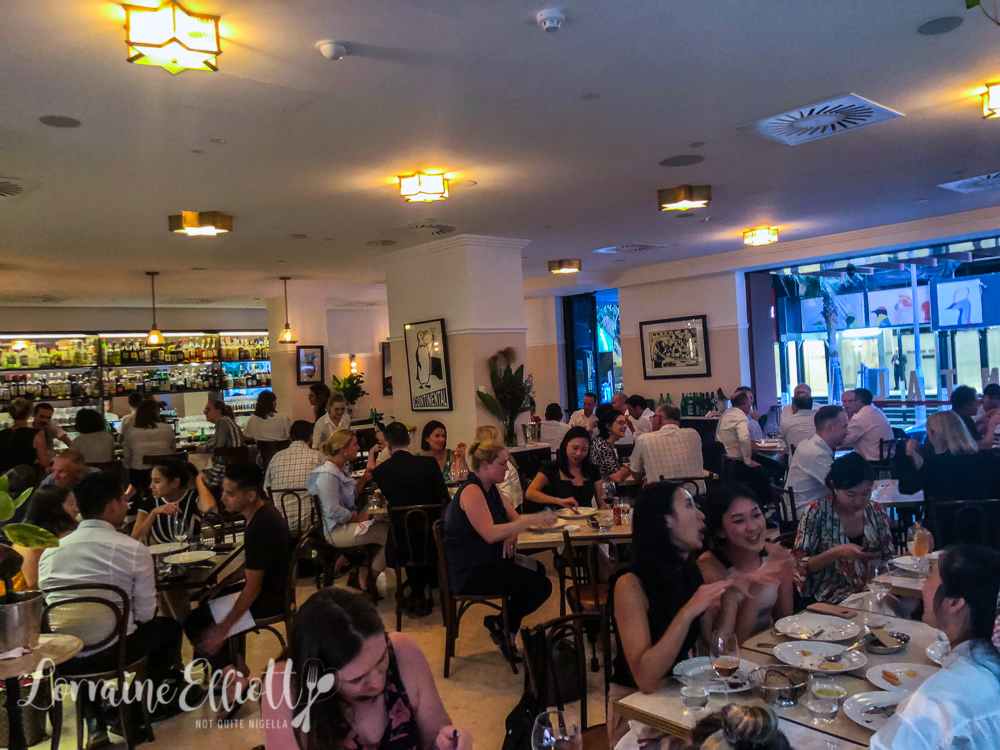 We take a quick peek inside and it's very animated with a lot of noise bouncing off hard surfaces so we gladly take the outside table option. It has been a few years since I ate at the Newtown branch. The city branch doesn't quite have the same retro charm as the Newtown version and the menu too reflects the different market. Our waitress is friendly and gives us some solid recommendations. 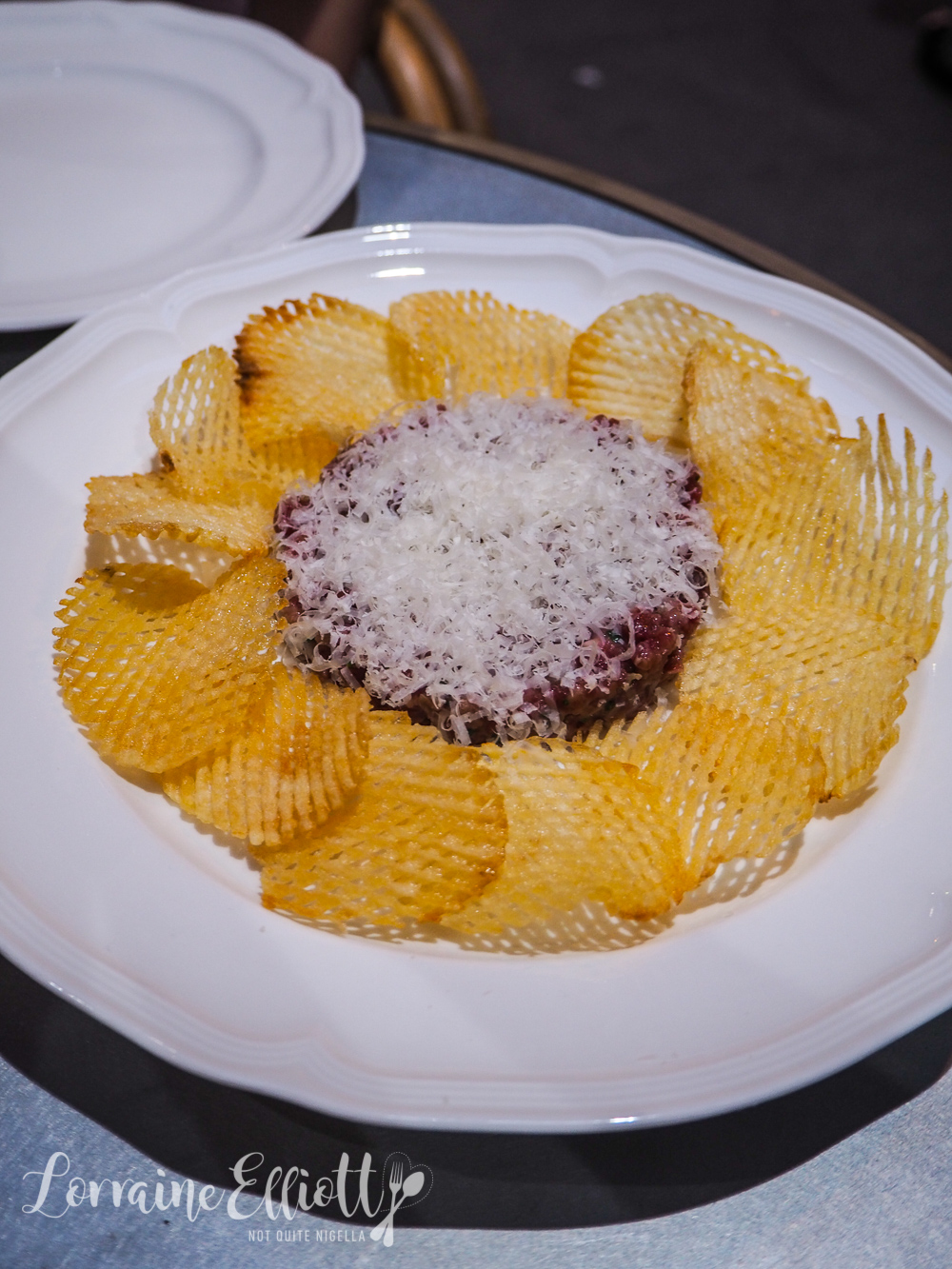 Sophia doesn't eat chilli but is happy to eat most things (apart from avocado and cucumber that is). But I'm used to it with Nina so it's fine. In fact we both agree on what we want to order in record time. The steak tartare is fantastic. Perfectly put together and seasoned it comes with crispy, delicate gaufrette potatoes and grated reggiano cheese on top. 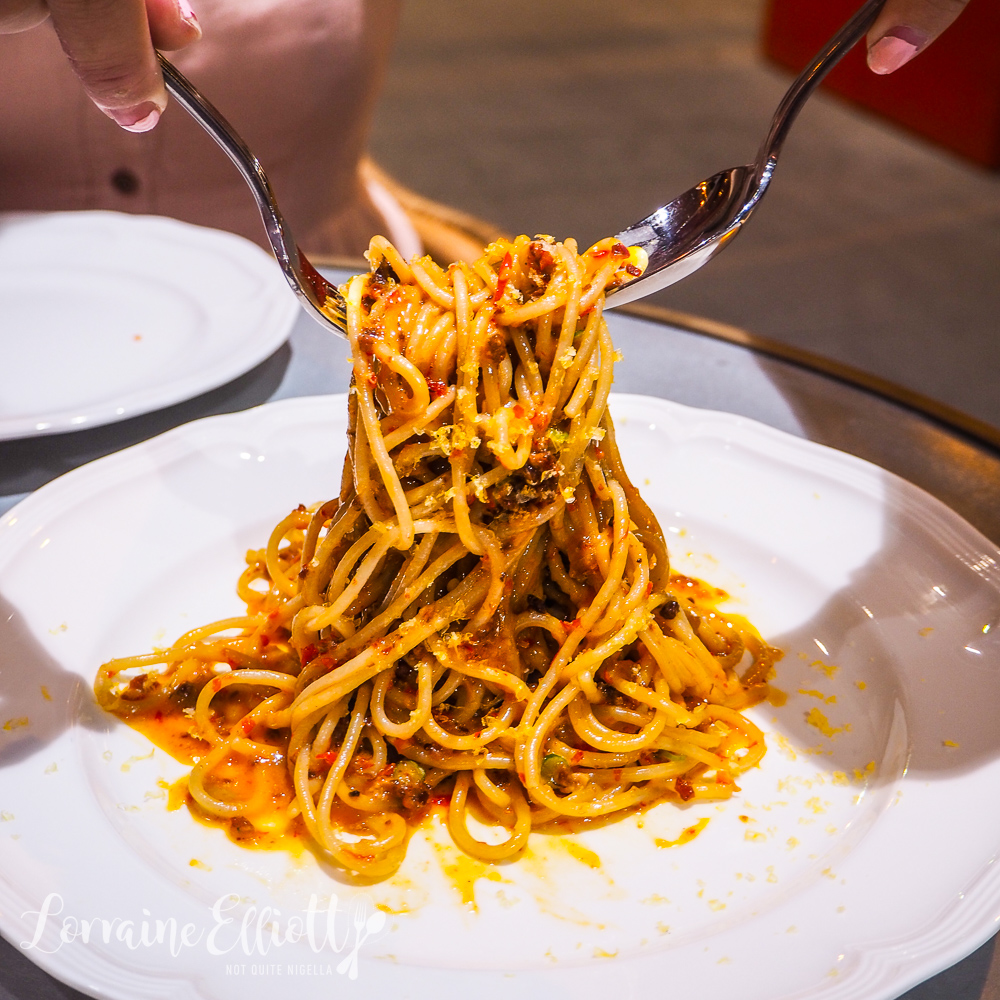 I can't believe I'm saying this but this is such a rich dish that I think it's best shared. While I love XO pasta or noodles I don't think I could finish this if I were eating it on my own. It's intense, with a salami XO with a mild chilli tingle and palate coating richness from the egg yolk with flavours somewhere between Asian and Italian. 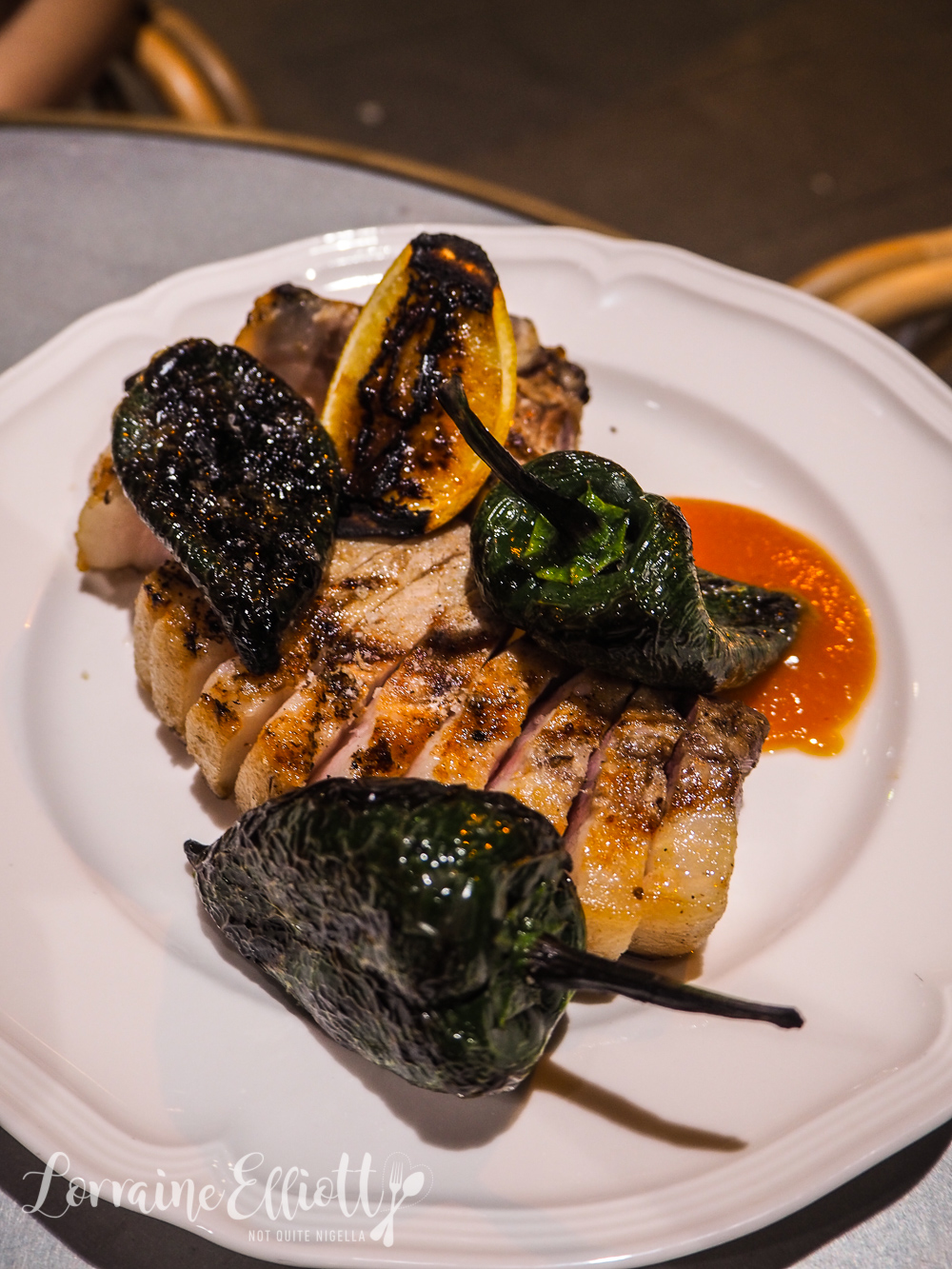 The Kurobuta pork chop is simply grilled but full of flavour. It comes with a fresh sweet and sour peach puree and charred spicy green peppers on the side. If you love juicy, fatty pork chops this is for you. Luckily I do but I know some people that just won't eat fat and they'll honestly end up leaving behind about a third of the pork if they order this. 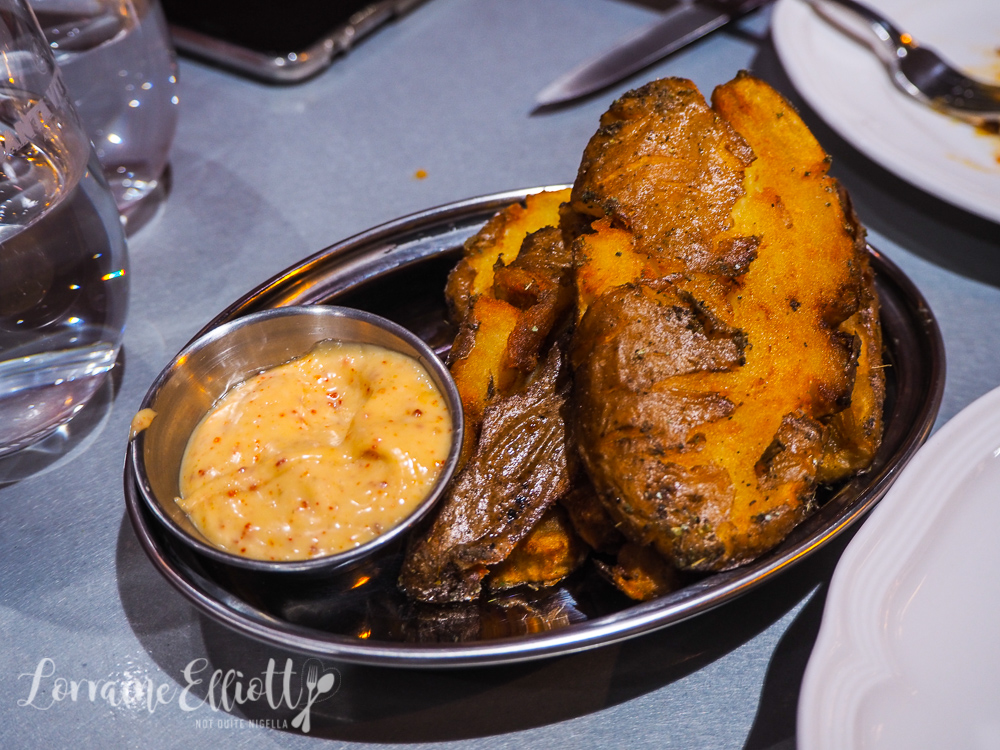 We were going to go with the green beans but we both set our eyes on the potatoes at the same time. They're wonderfully crunchy and lightly smokey and even good without the sauce (again, did I really say that?). 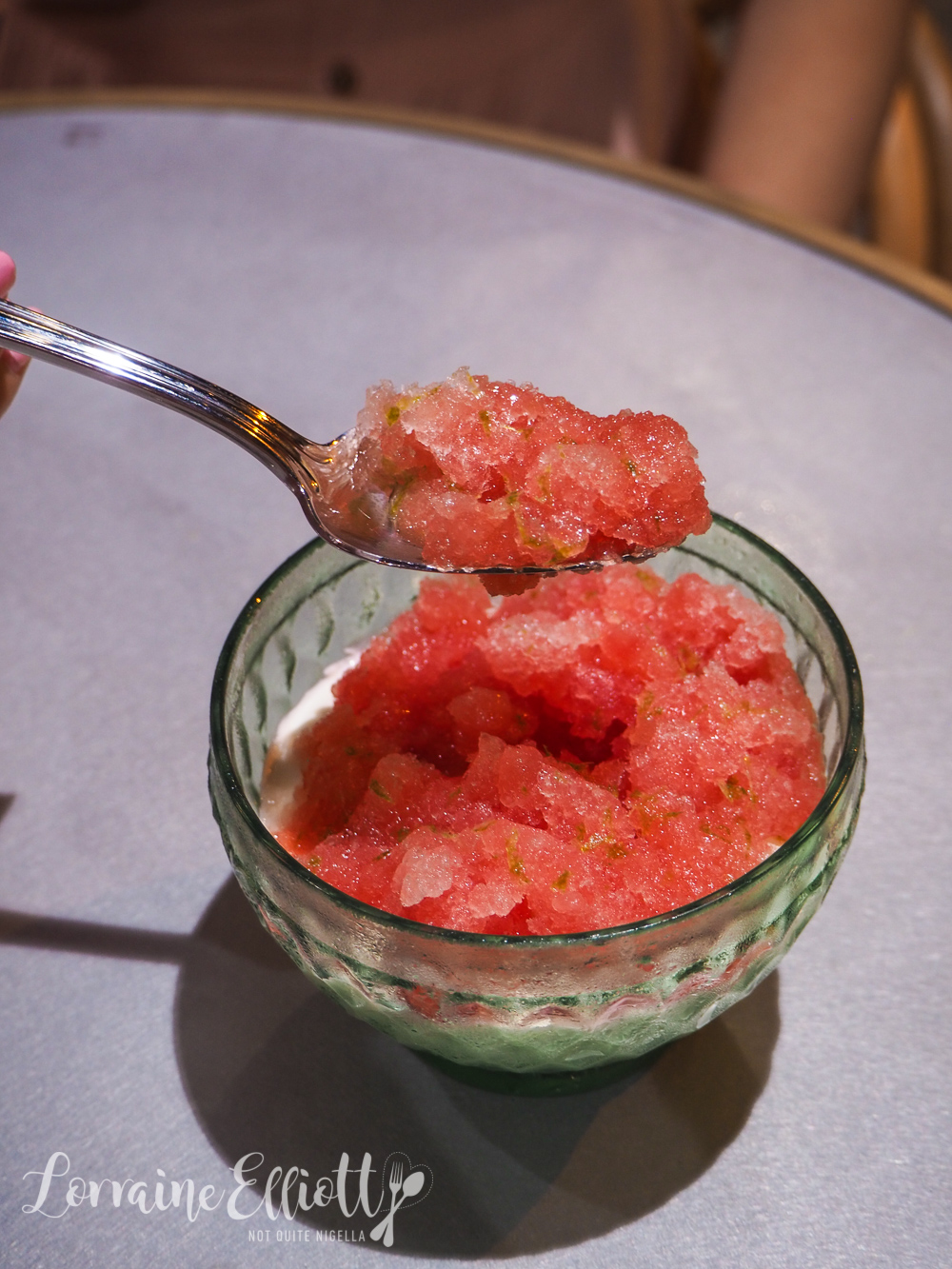 The dessert menu has five offerings including some gelato but we are swayed by our waitress's recommendation. This has a layer of creamy, tart yogurt panna cotta topped with watermelon granita with a mint and lime syrup. It's perfect for a hot summer's night and we both agree that the refreshing granita doesn't really even need the creamy element.

So tell me Dear Reader, is there a food that you don't eat at all that comes up regularly on menus? And given the choice, would you eat inside or outside?