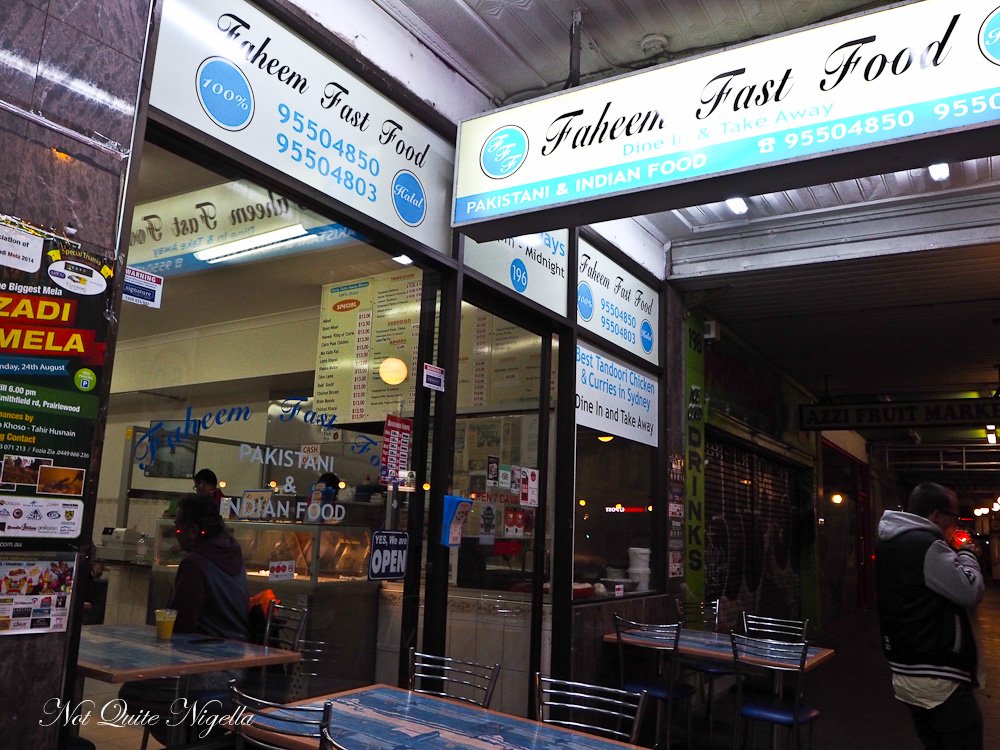 For a city so vibrant and packed full of places to eat, there is one thing that Sydney lacks. It's somewhere to eat late at night-like really late at night. Chinatown is the area of choice for those that work late like chefs but for the other late night workers like taxi drivers, Faheem Fast Food on Enmore Road lures them in. 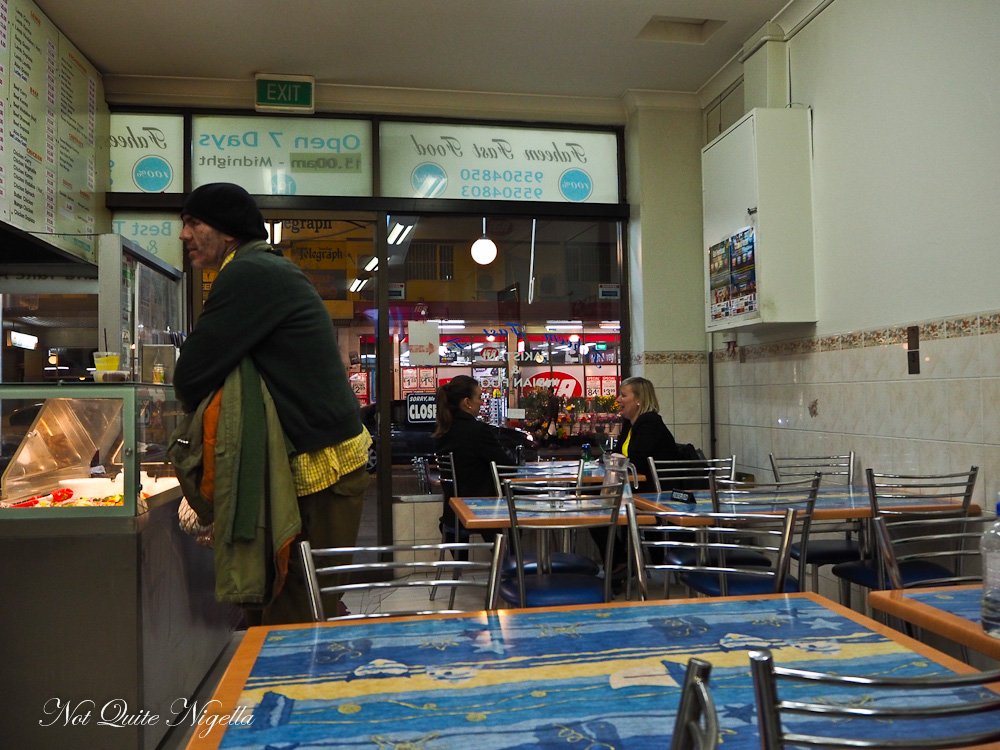 The halal Pakistani and Indian food is served fast although fast food is perhaps a misnomer as it suggests that it is made with less care and skill but this is not the case. I am visiting Faheem with the absolutely gorgeous Amy from Milkteaxx you can read her post here), one of the sweetest bloggers that I have ever met. We take a seat in the main room - there are two rooms with a wall between. It's all fluorescent lights and tiles on the wall. The front section near the front door is where the naan and tandoori chicken are made in the tandoor ovens. 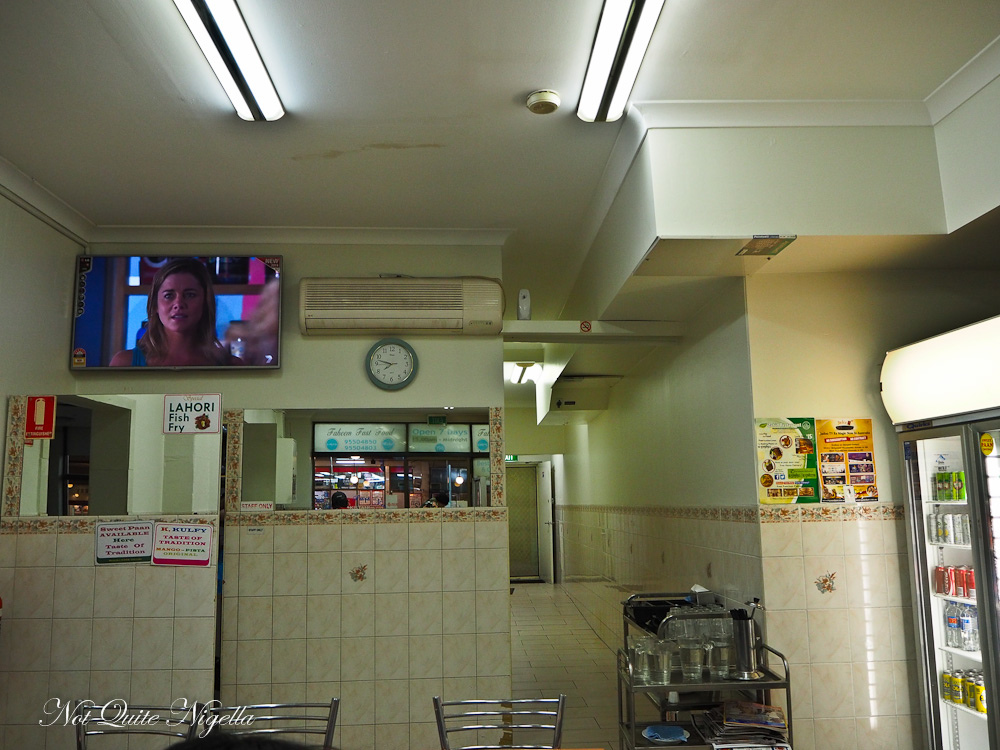 We ask our waiter what to order pre-warning him that we eat everything and will over order. We're intrigued by the tandoori chicken-here it comes as regular, garlic or lemon tandoori. He points us towards their signature dish, the Haleem king of curries and the Lahori Fish Fry. There is a range of the usual dishes like butter chicken as well as dishes featuring offal like kidneys and brain. The patrons are a mix of what appear to be locals and Indian and Pakistani families. And us, two girls that just ordered enough for four. I love that Amy loves to try lots of things as I do. 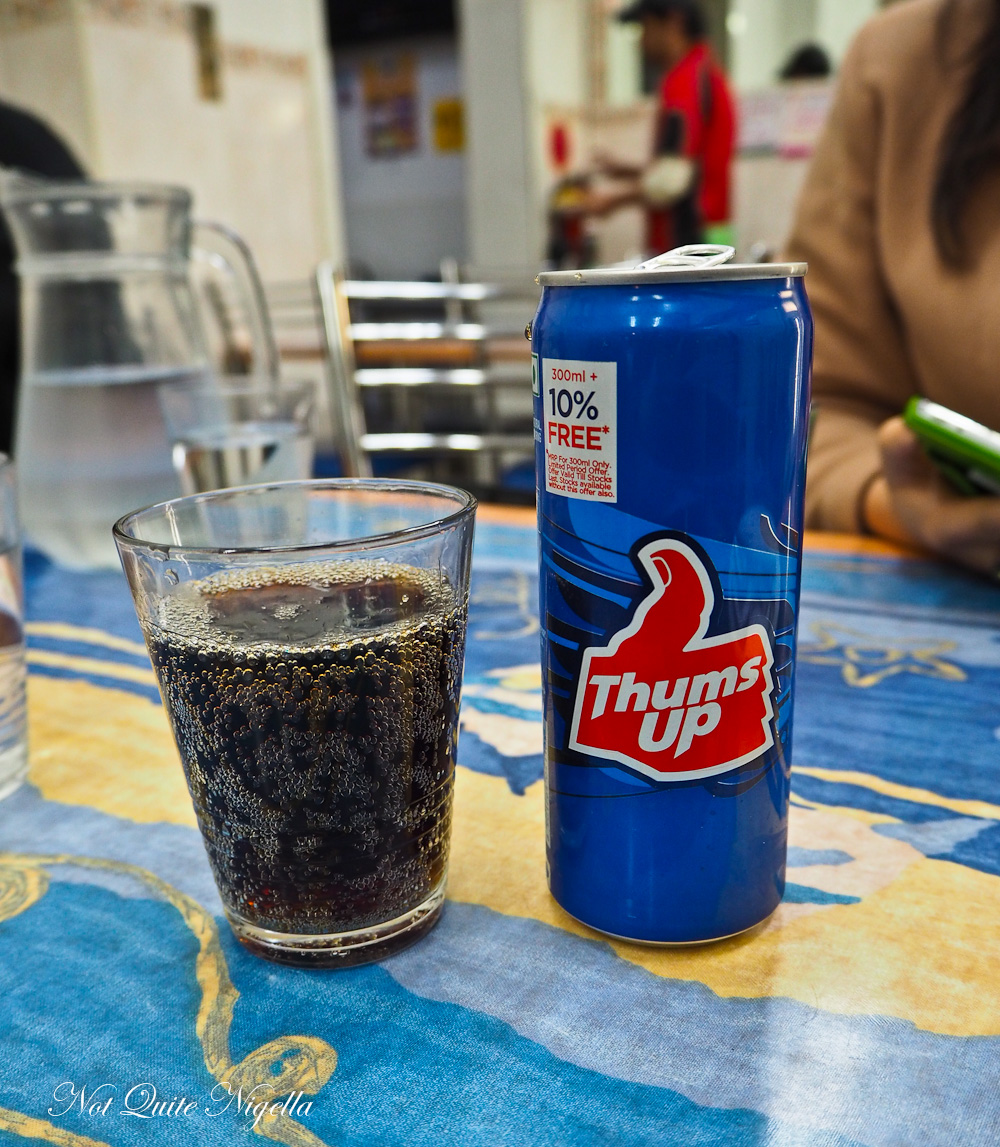 While waiting for our food I look towards the fridge where there is a range of Indian soft drinks. The one that catches me eye is the "Thums Up" (sic) with an upturned thumb as a logo. It was introduced in 1977 as a replacement for Coca Cola when it withdrew from the market. It has since been bought back by Coca Cola and is the number one cola drink. It tastes very similar to it with perhaps a slightly floral or herby aspect to it (but I'm not a Coca Cola aficionado as I mostly bake with it). 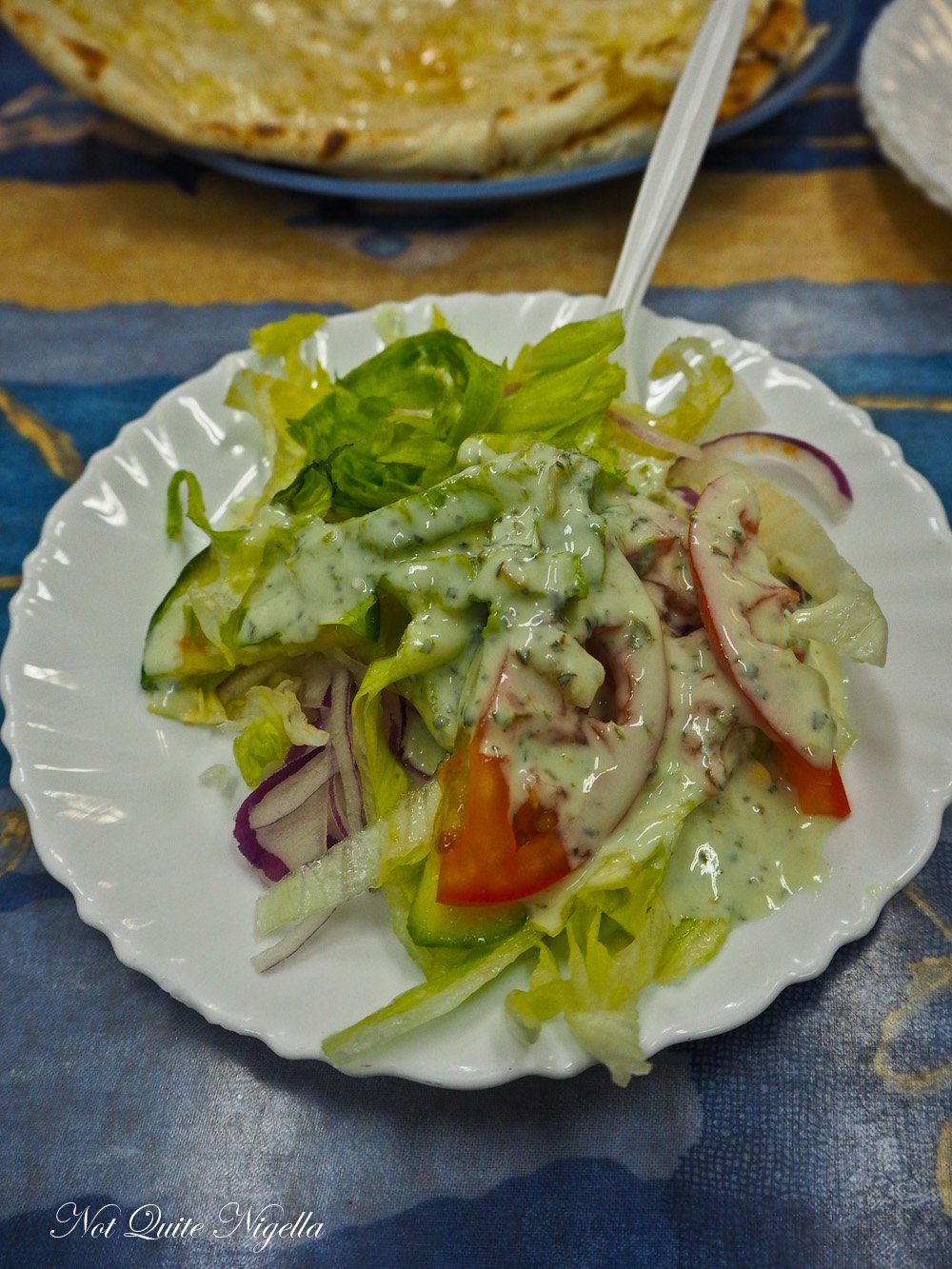 A plate of complimentary salad is brought out to every diner. Because of course you have to eat your veggies. 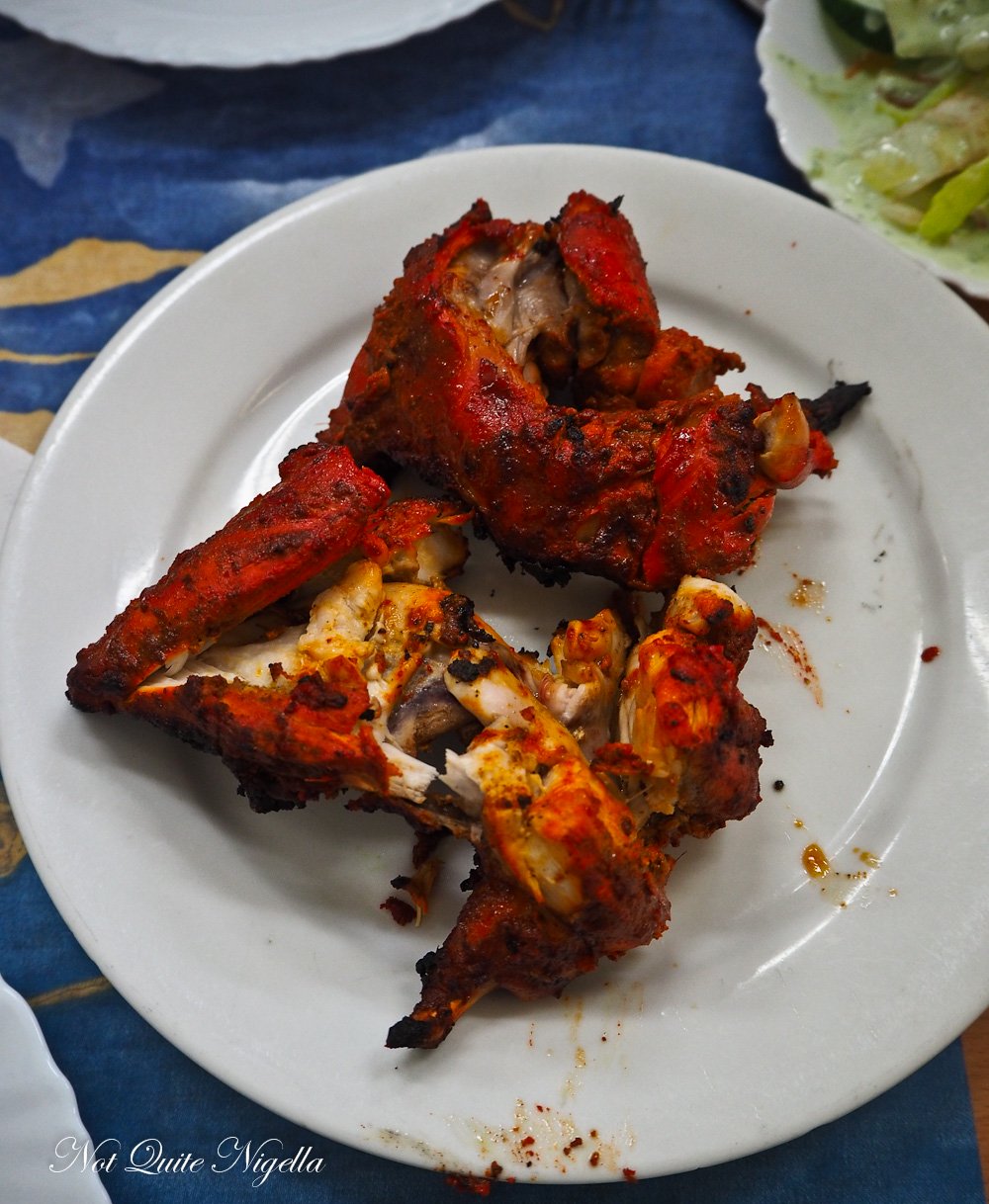 I had asked if we could have a half lemon tandoori chicken (there's only a whole one on the menu) but I guess this wasn't possible as we received half a garlic and regular tandoori chicken. With visible minced garlic, it's moist and not overcooked at all, the chicken redolent with garlic. 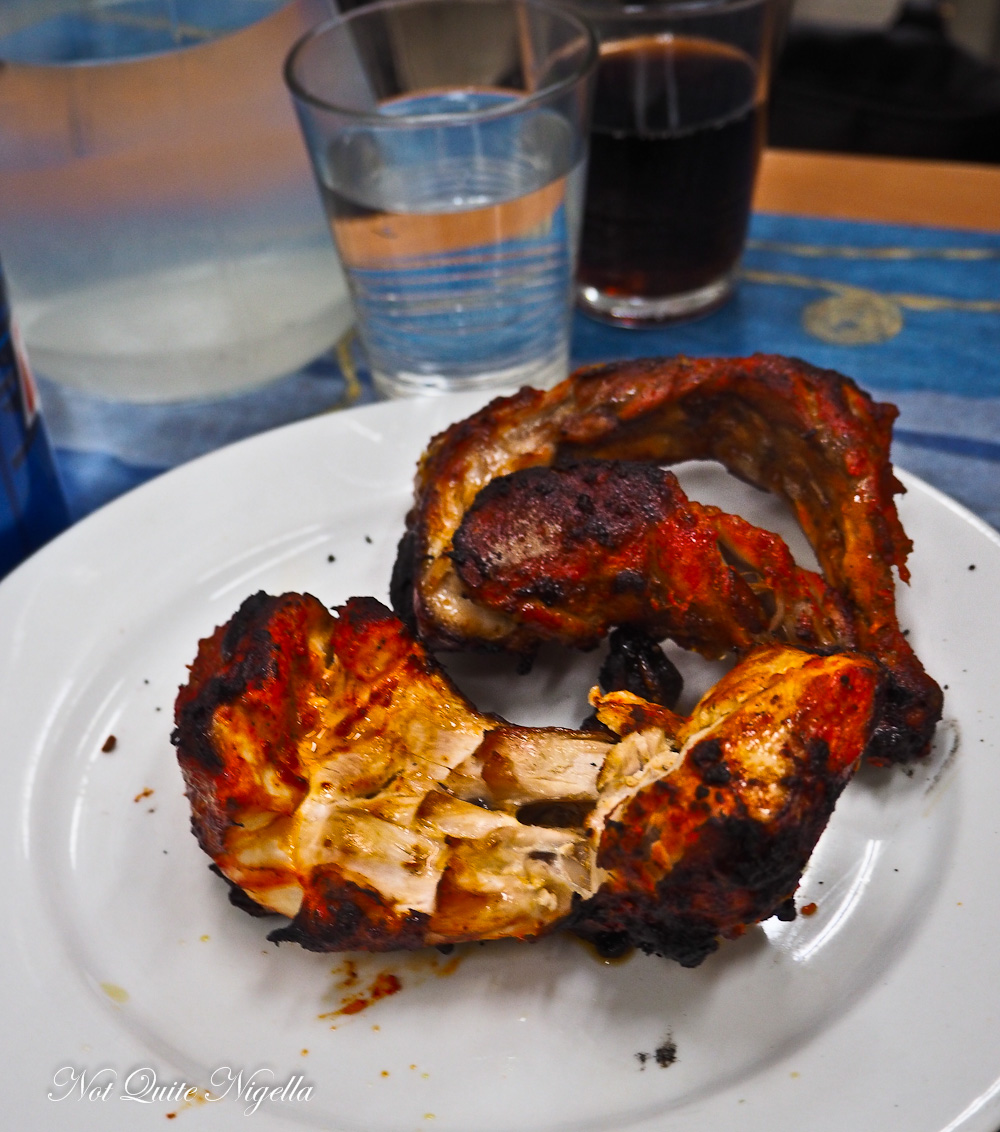 Okay so it doesn't look pretty but the tandoori chicken is a less garlicky version of the one above. Terrifically tender and not dry at all, we enjoy this but then the rest of the food comes out to distract us. 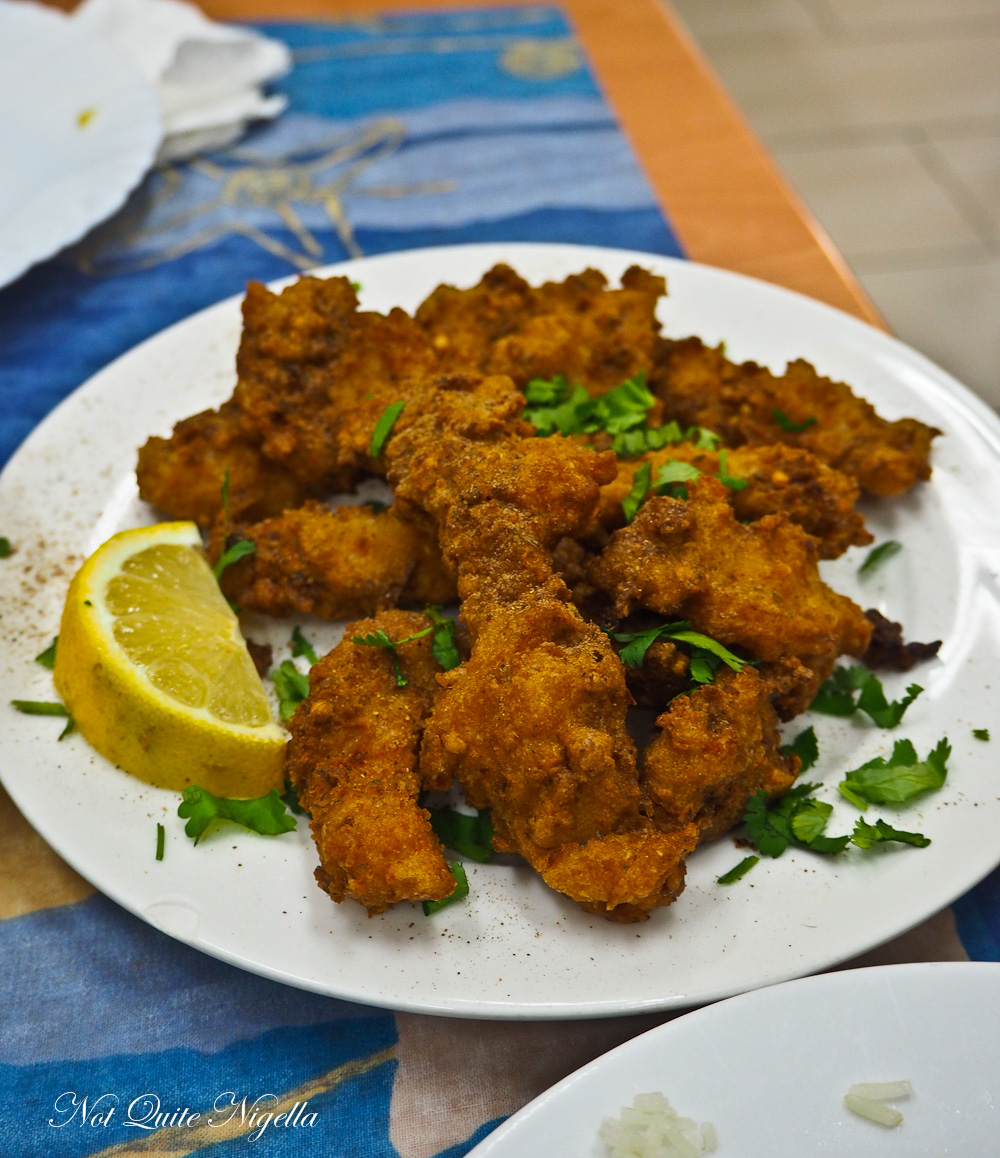 The lajori fish fry arrives and it is a very generous size. The coating is crunchy and textural and undeniably spicy while the fish melts in the mouth. We have trouble finishing the dish due to its size. 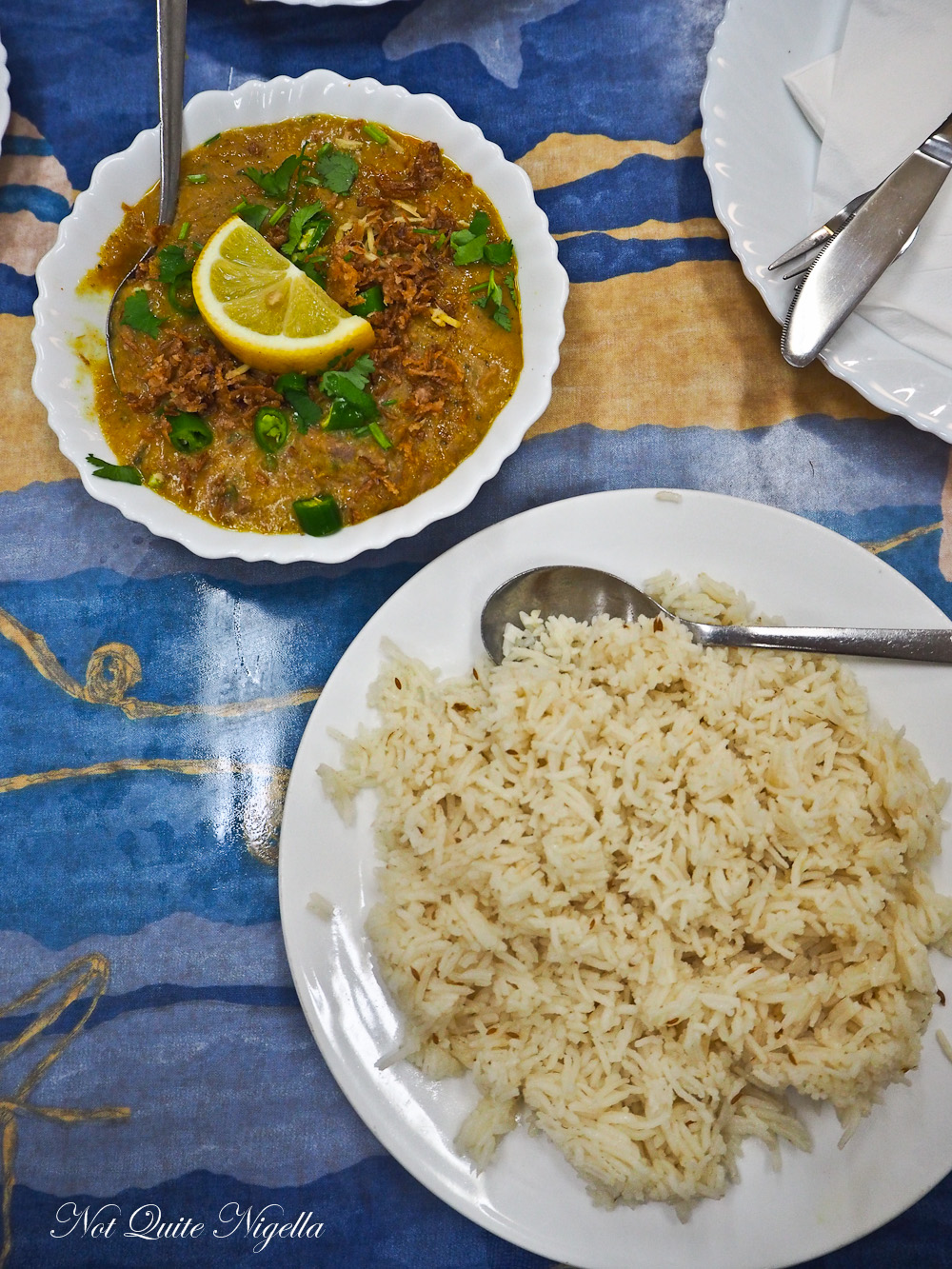 But my favourite is the haleem king of curry made with four different types of lentils slow cooked with soft, silky shreds of beef and whole wheat and topped with green chillies, chopped coriander, a slice of lemon and fried onions. This is said to be a traditional Pakistani curry that originated in Persia and it is slow cooked for up to 12 hours. It's a dish I could happily drive across town for and even the day after while I am writing this, I get the urge to hop in the car and order a bowl of this divinely comforting dish. The basmati rice is also good. With caraway seeds it is lightly fragrant and moreish and a good foil for the haleem. 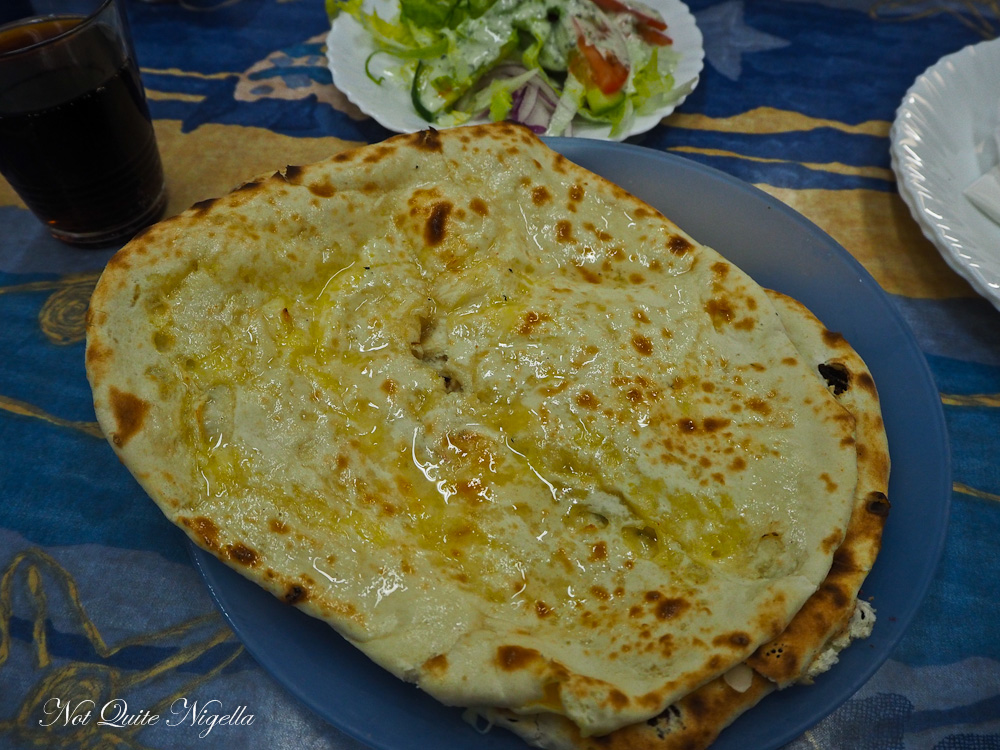 Cheese naan and kashmiri naan $4 each

Oh how I love naan! I've tried to make naan so many times and it never turns out quite like this. The cheese naan is the pick of the two. The bread is soft and light and the cheese and ghee spread naan is an exercise in carb loading. The kashimir one has whole sultanas and is not quite as soft as the cheese naan. 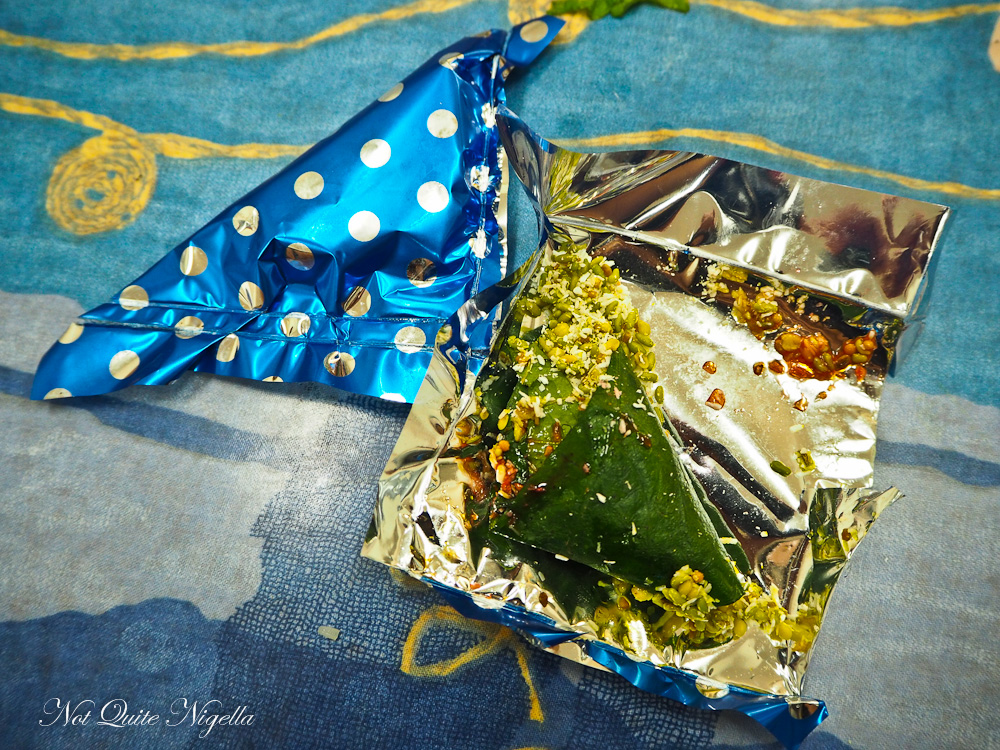 We spot the signs for sweet paan or "meetha" on the walls and suitably intrigued we ask about the paan. Springing into action, Amy googles it and sees that it is based on the betel leaf. The Pakistani sweet is a betel leaf topped with candied fennel seeds, coconut, honey, raisins and spices. And does it pack a punch! It's like air freshener exploding in our mouths. Neither Amy or I really go for this but I brought some home to Mr NQN to see what he thought of it and he liked it! Seriously, we have the opposite tastes in food. 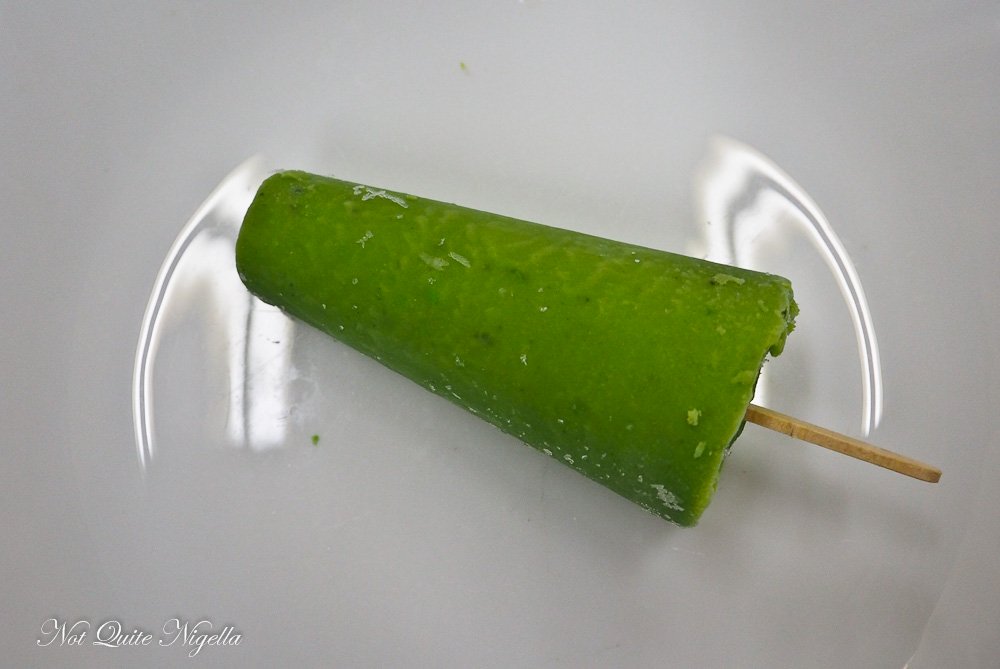 The pistachio kulfi arrives in a ziplock bag and does the job of cleansing our palates of the paan but it isn't very strong in pistachio and hard and icy to eat. Perhaps we should have stuck with the savouries, indeed I can't stop thinking about the naan and the haleem and am already conspiring ways to return.

My urge for the cheese and garlic naan haunts me for the next couple of weeks and I return with Mr NQN, Belinda and her girls Mia and Ruby for a fix. Three naans are ordered (one entire one for me ;)) as well as the haleem lentil dish and we try another few items and as before, a plate of salad arrives. 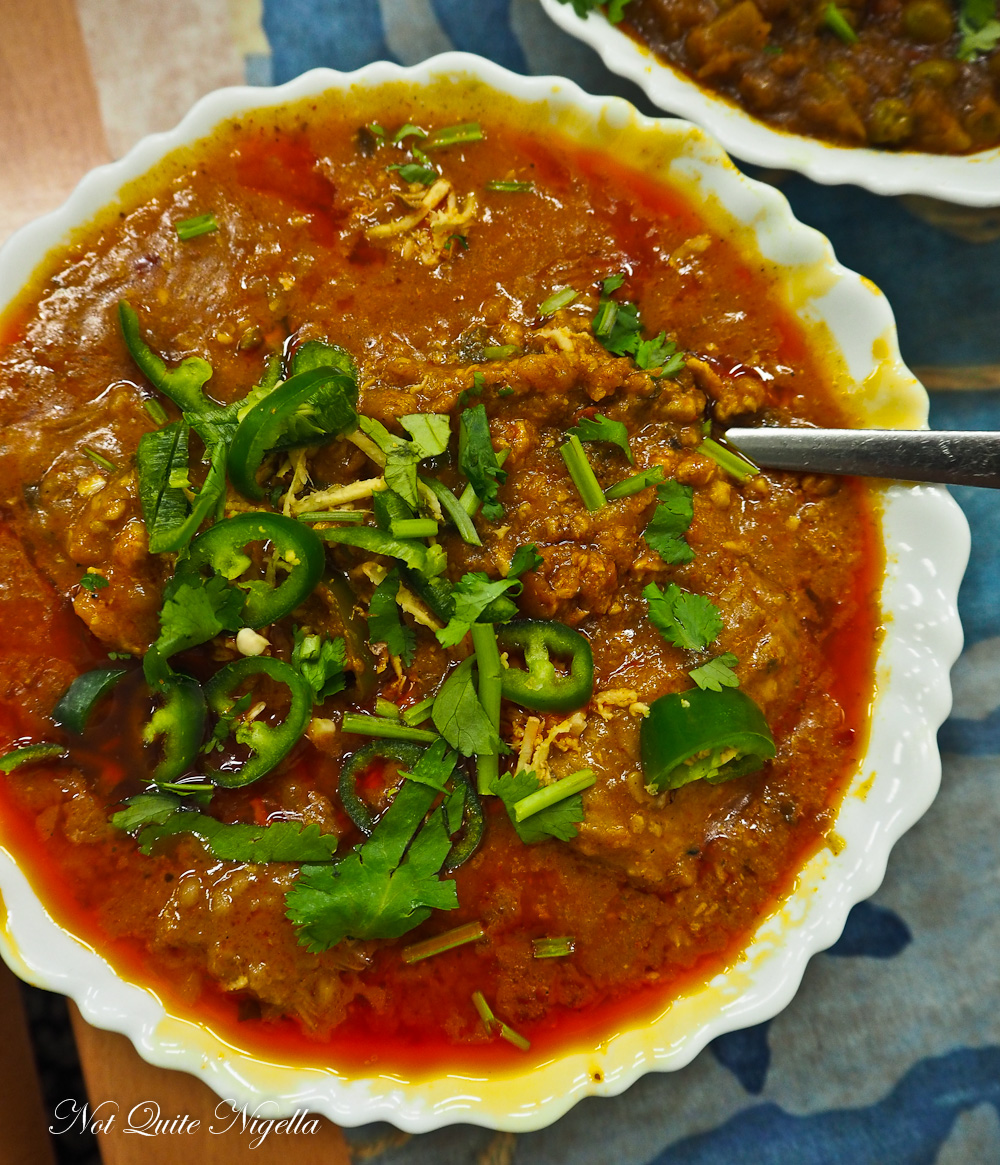 We were lured by the description "A trendy dish in traditional Pakistani style"-after all who doesn't want to try what is hip in Pakistan? It is absolutely delicious, the beef pieces soft and the brains broken up into smaller pieces so that they're virtually indistinguishable in the curry (for those squeamish about brains). It's the richness of the flavours and the pronounced spice that also woo us over and it's easily the table's favourite dish. 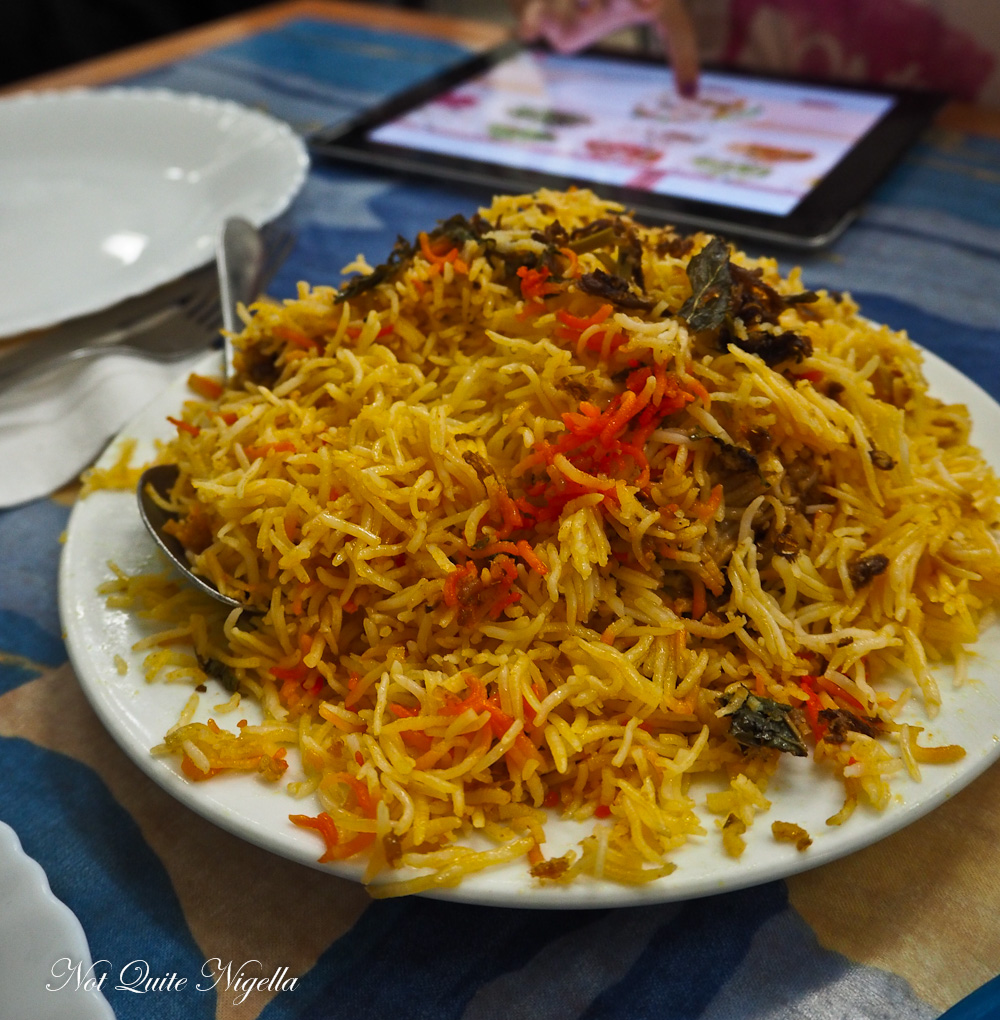 The chicken biryani is a tumble of seasoned basmatic rice and a piece of soft cooked chicken. There are pockets of spices and soft cooked onion throughout the biryani and it's a substantially sized dish. 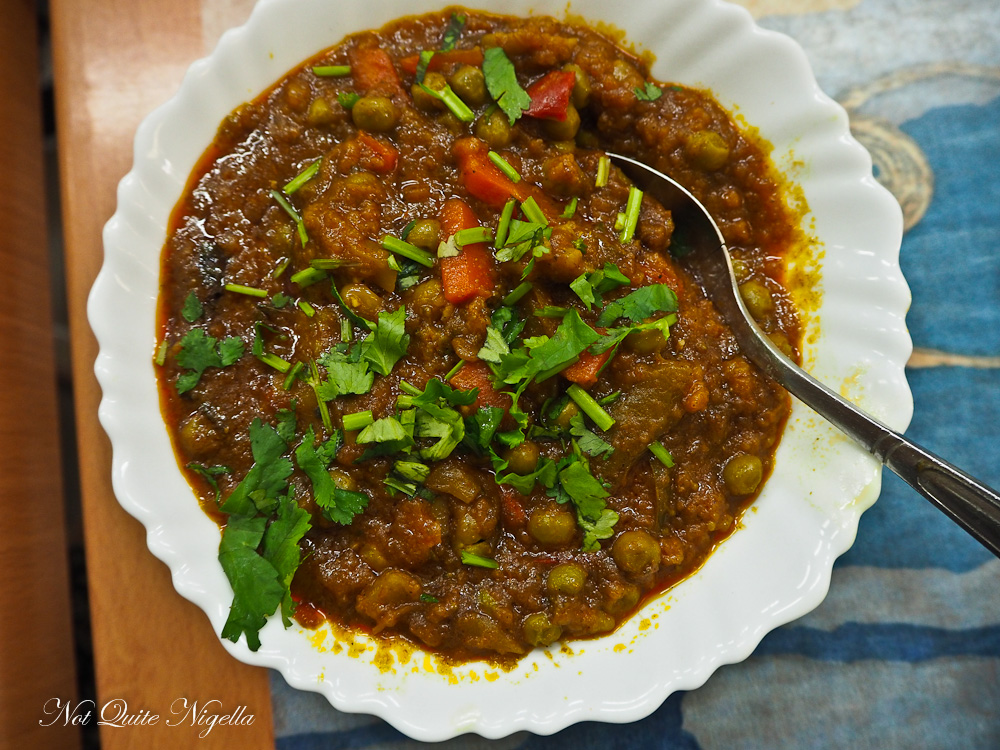 For a vegetable dish we are steered towards the mixed vegetable korma, all spicy goodness and flavour. 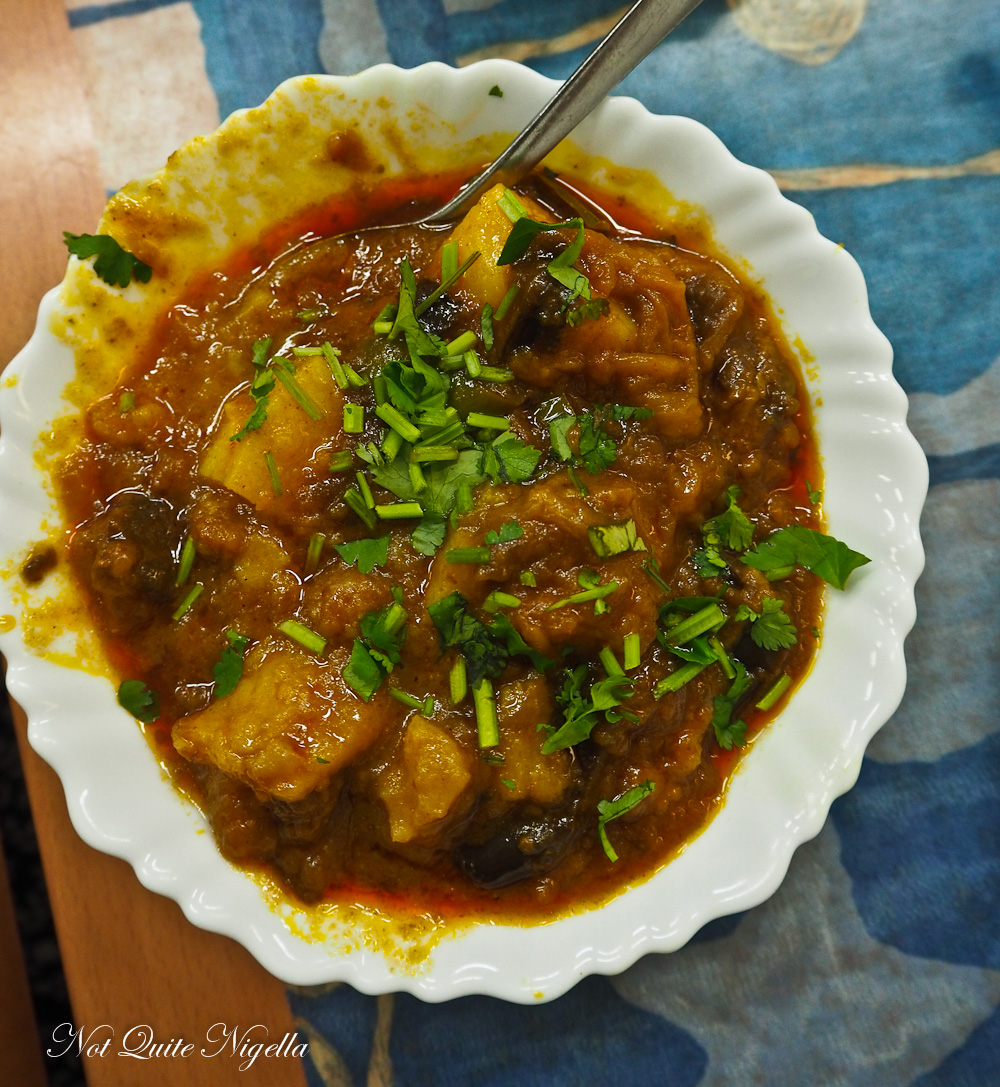 The eggplant dish is perhaps a little less spicy than the mixed vegetable korma and is made up of mostly potato chunks with some eggplant in it too. Out of the two vegetable curries, I prefer the korma for its spiciness and flavour.

And of course the best thing about over ordering is having leftovers for the next night!

So tell me Dear Reader, have you ever tried brains? Do you like them? And do you think that curries taste better after a day or two?