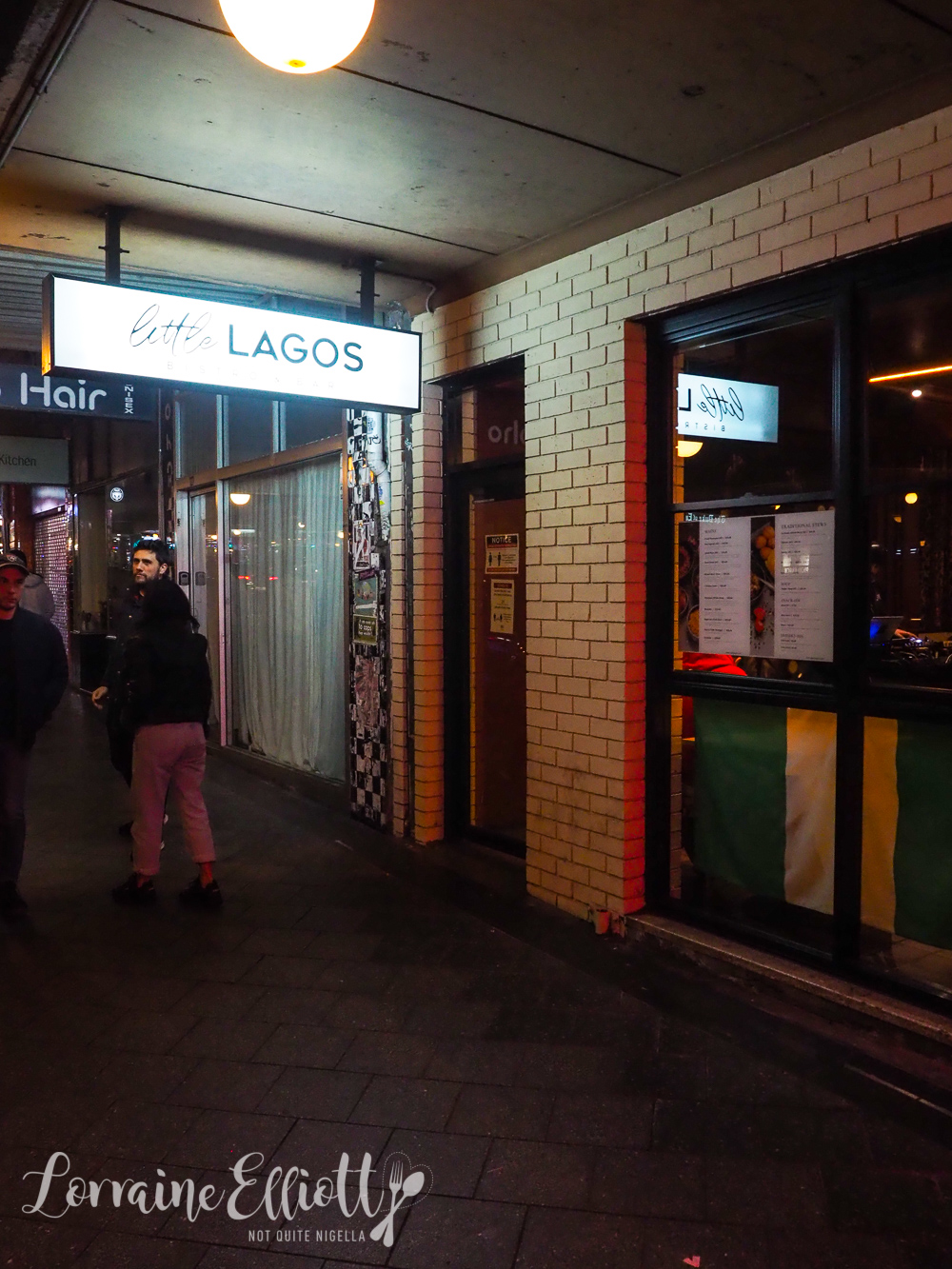 A Little Lagos began as a pop up at Earl's Juke Joint and they have now opened up a restaurant on Enmore Road. This popular Nigerian restaurant serves up incredible Jollof Rice, Goat Stew, Ofada Stew, crispy plantains and puffy donuts dredged in sugar for dessert! 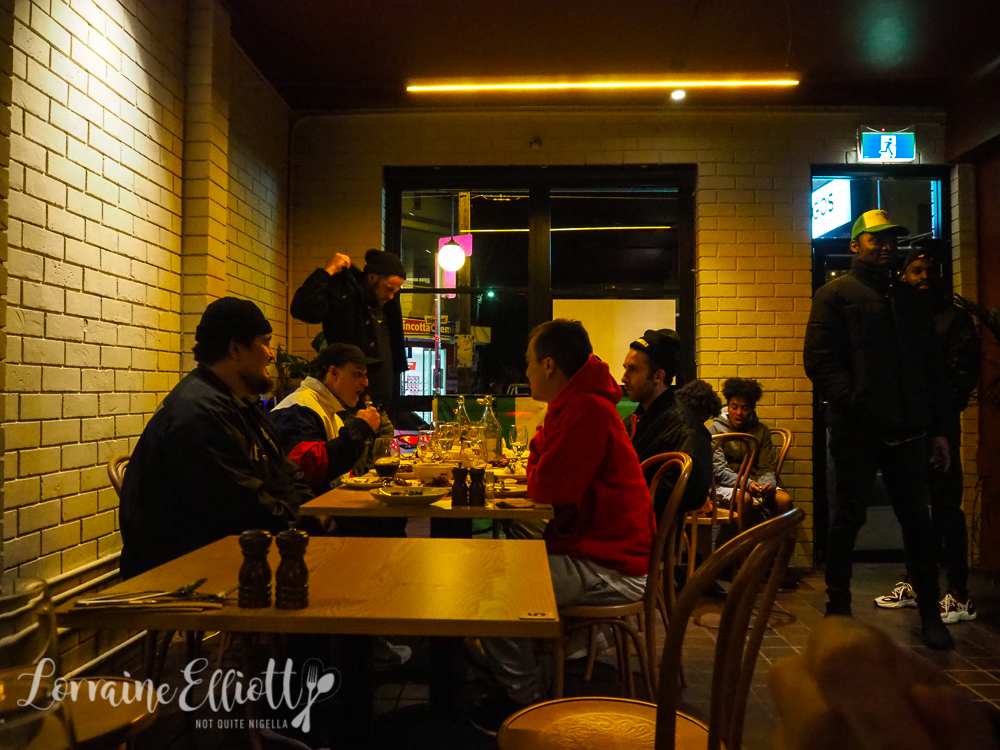 "This is a must order," says Ade Adeniyi, the Nigerian chef and owner behind A Little Lagos. He's pointing at the Jollof Rice on the menu, a West African rice dish made with tomatoes. DJ Oluwa Klasik plays music and the vibe here is celebratory. You feel like you're in the epicentre of fun. It takes the place of Wish Bone.

Ade was born and raised in Lagos, Nigeria but "I didn’t actually know how to cook as a child because I had a lot of sisters growing up and I was pretty much never in the kitchen. I learned after I went to college in Romania and lived alone. I would message my sisters and they would send me recipes to cook. I moved around because of my work and family so I have lived in Dubai, Dublin, Romania (for University), London and now Sydney. I started little Lagos when I moved to Sydney in 2016 and couldn’t find any place to go hang out for food, drinks, music!". 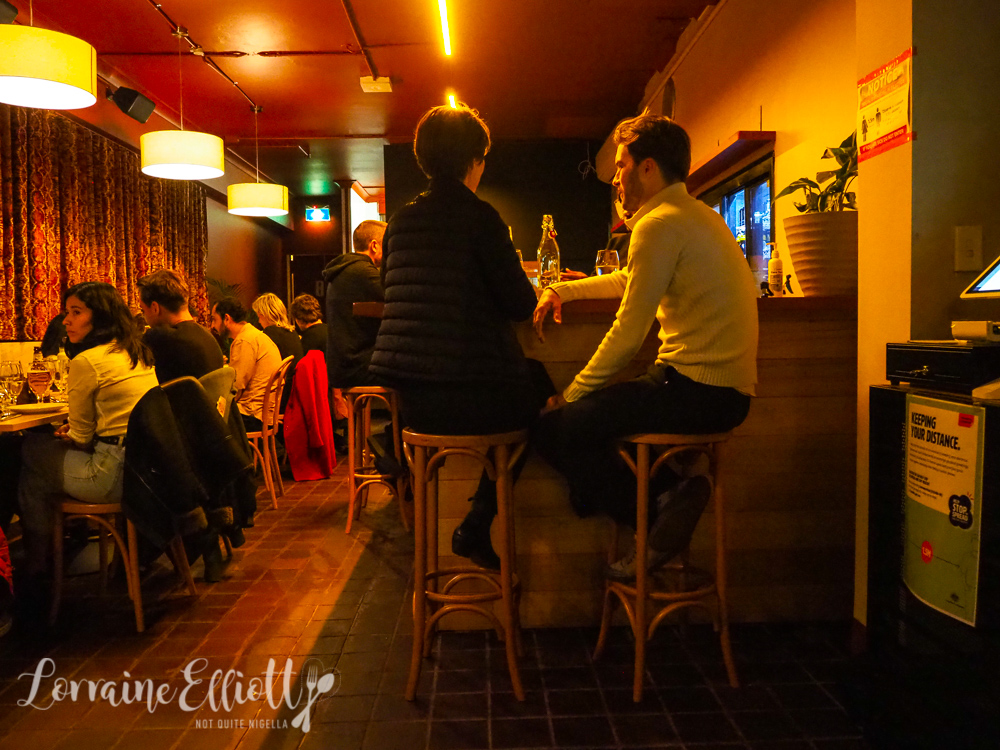 Ade has worked in banking and has lived in many countries around the world. A Little Lagos started as a pop up and four weeks ago has opened up permanently on Enmore Road. So far the response has been overwhelming. They're booked out almost every night and you had best come with a booking (you can message them on what's app).

Nigerian food is full of delicious and richly flavoured stews, vegetables, fried plantains aka "dodo" all served with starchy vegetables or rice to dampen the heat from scotch bonnet chillies. Spices like thyme, nutmeg, ginger, turmeric, alligator pepper, ehu or ariwo (Calabash nutmeg), locust beans (made from carob) are used and dried seafood like dried herring and ground dried crayfish are used to flavour dishes. 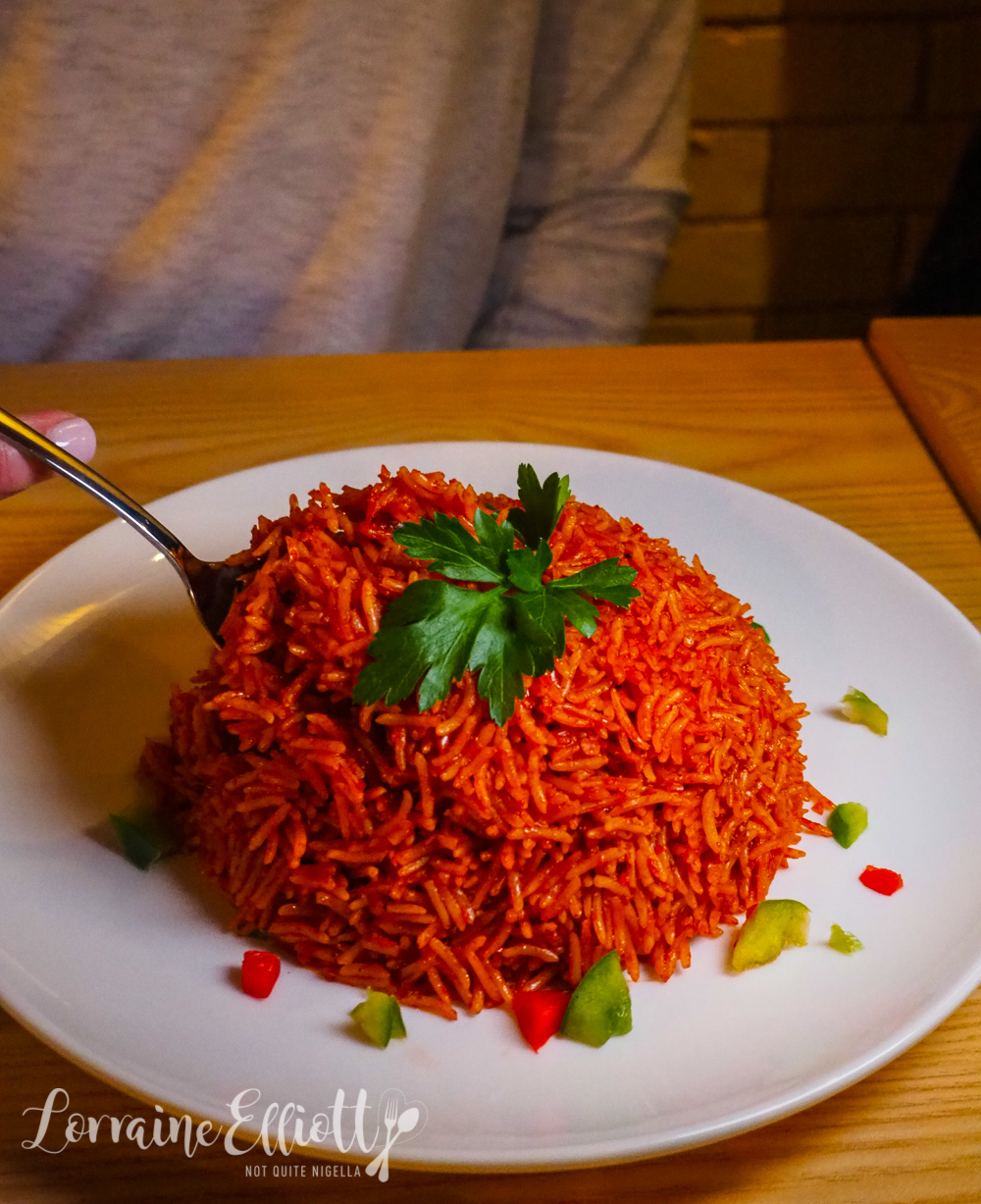 That brings me back to the Jollof Rice. We ordered all of Ade's suggestions and the Jollof rice is the first thing to arrive and it looks resplendent and glistening on the plate. It is long grain basmati rice cooked in a blended sauce of tomatoes, red capsicum, habaneros and onions with traditional Nigerian spices. Why is Jollof rice so special to Nigerians? "I think it’s because it was a 'Special occasion' dish. Growing up, we only ate Jollof on Sundays, or on birthdays, when you got good grades at school haha or when you’ve been such a good child. Jollof is also the main dishes at parties so it’s a blessing when you get invited to any party because you know there will be Jollof! I think that’s what makes it so important and special." 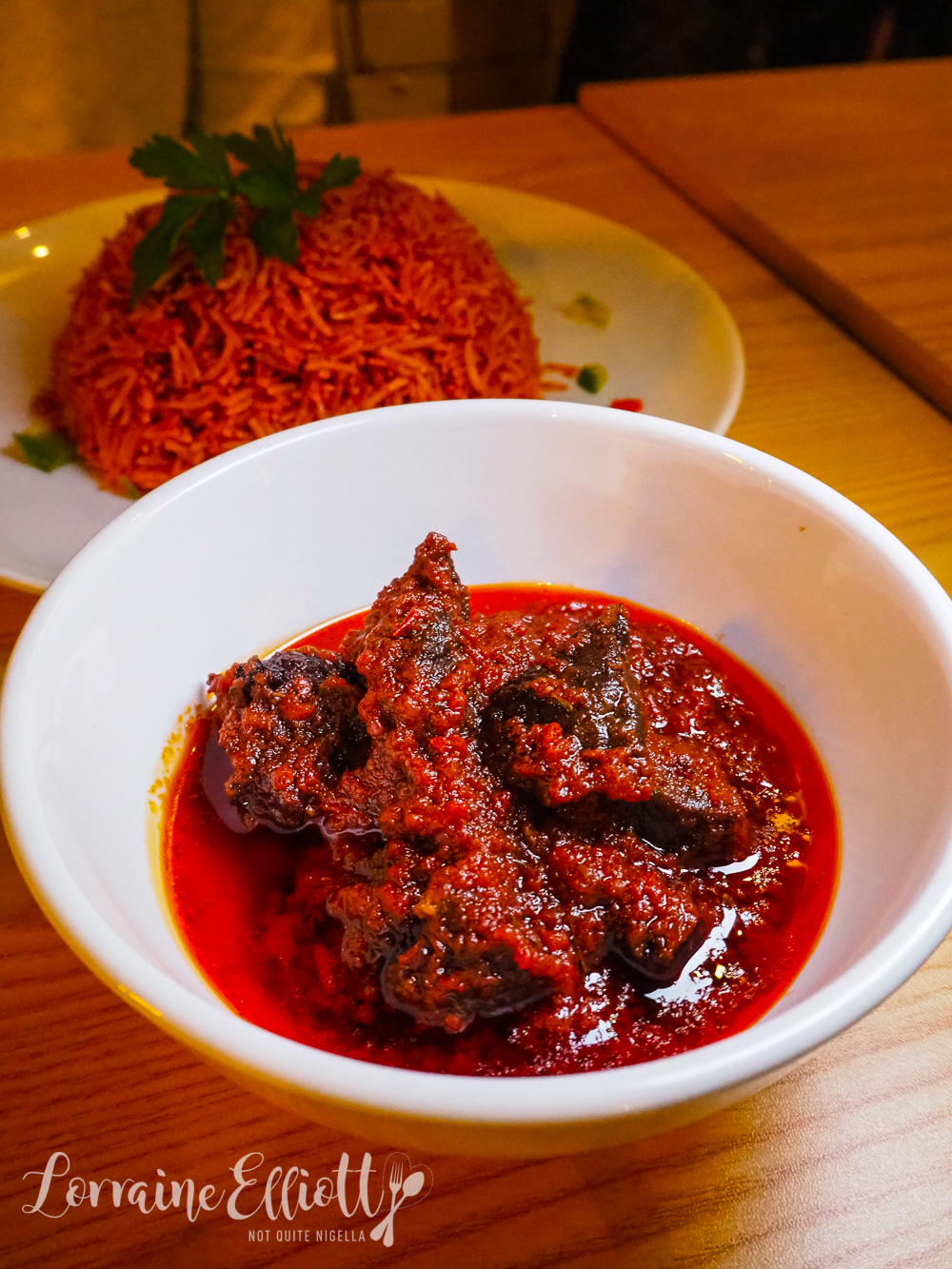 The goat stew is another classic Nigerian dish and it features a silky deep red sauce made with tomatoes, red capsicum, habaneros and onions with traditional Nigerian spices. The pieces of goat have an interesting texture, a little drier and chewy in texture but we all love the richly flavoured sauce. 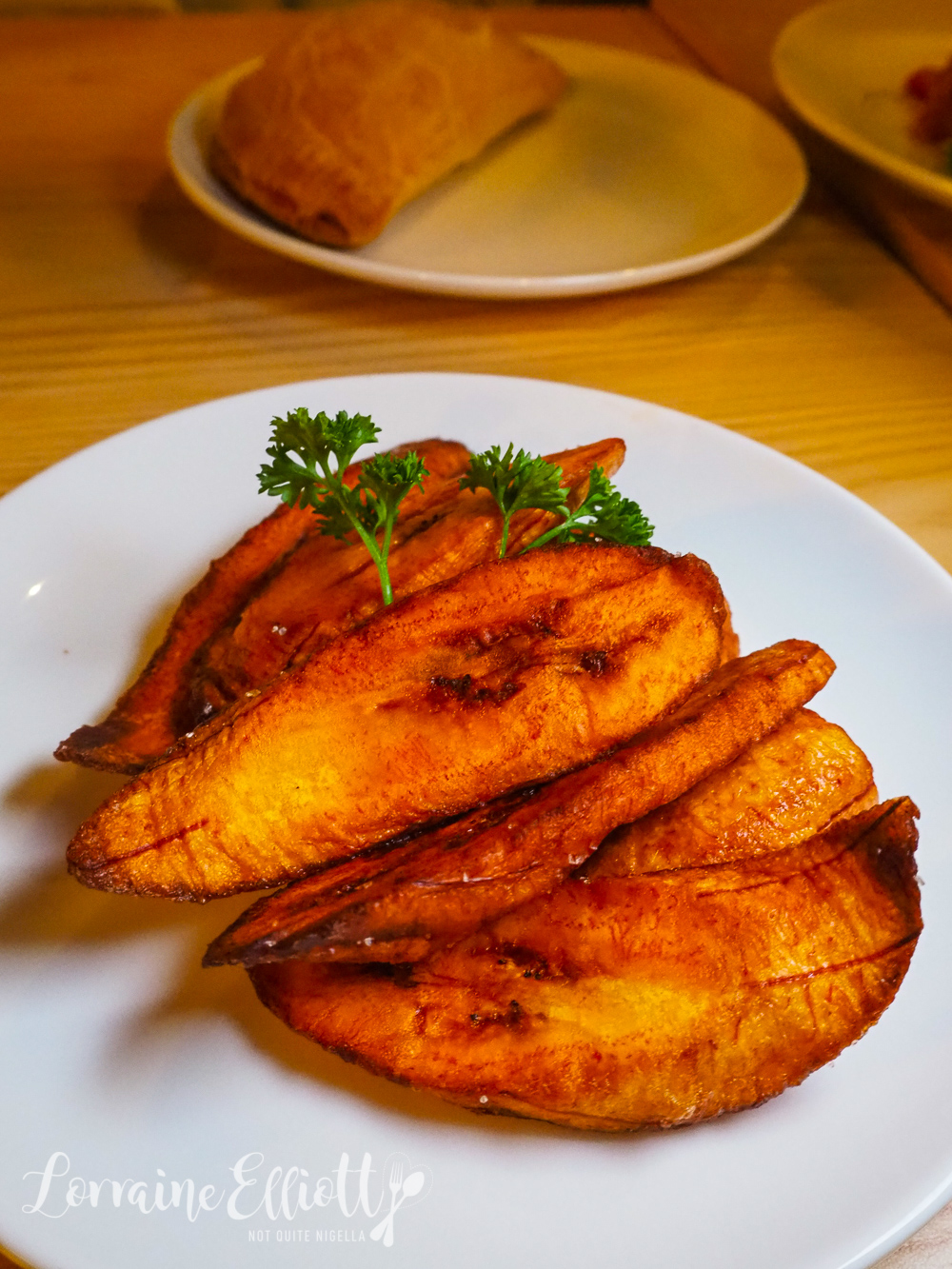 Fried plantains are best paired with Jollof Rice and these "dodo" are crispy and moreish. I also love dipping these in the sauce from the goat stew. 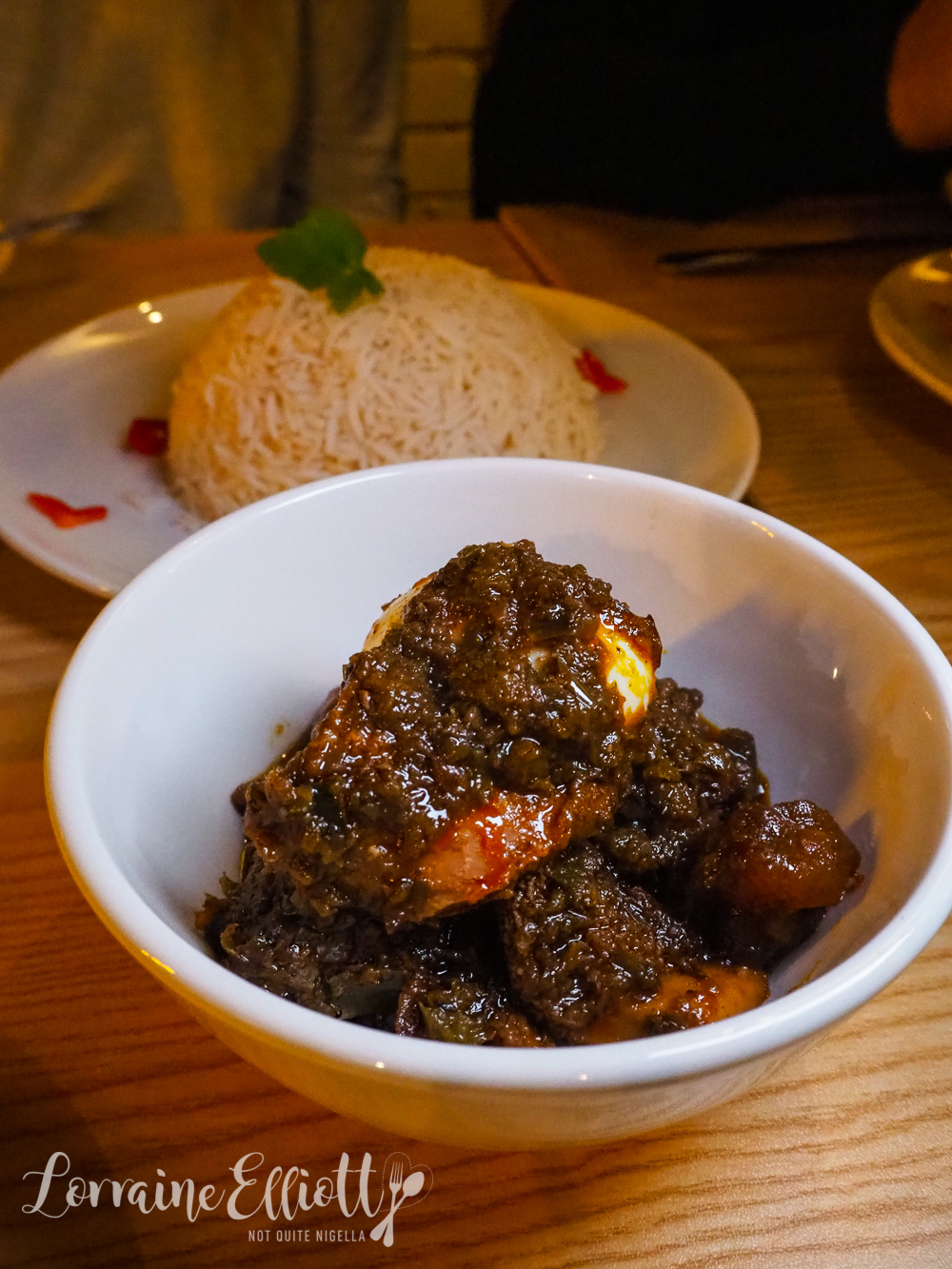 One of our favourite dishes is the Ofada Stew. Ade does warn us that this is on the spicy side and it is a little bit tingly but never too much. The meat inside includes fish cuts, cow leg “Bokoto", cow skin “Ponmo” and tripe “Shaki” with boiled eggs in a rich and intense spicy sauce made with red capsicum, locust beans, green bullhorn capsicum, habaneros and onions. It's probably the hottest dish from everything that we've got but if you're used to spicy, you should be fine. It comes with steamed long grain white rice. Ade describes the stew, "Ofada Stew is also called “Ayamase stew” and it’s a very traditional stew that is popular in the Western part of Nigeria and it is unique to the Yoruba tribe. It’s quite spicy but because of the deliciousness you just keep going. It contains bits of fish and meat which is a rarity when it comes to stew. The main ingredient that gives it the color and texture is the free capsicum and the “bullhorn” is the favourite to use." 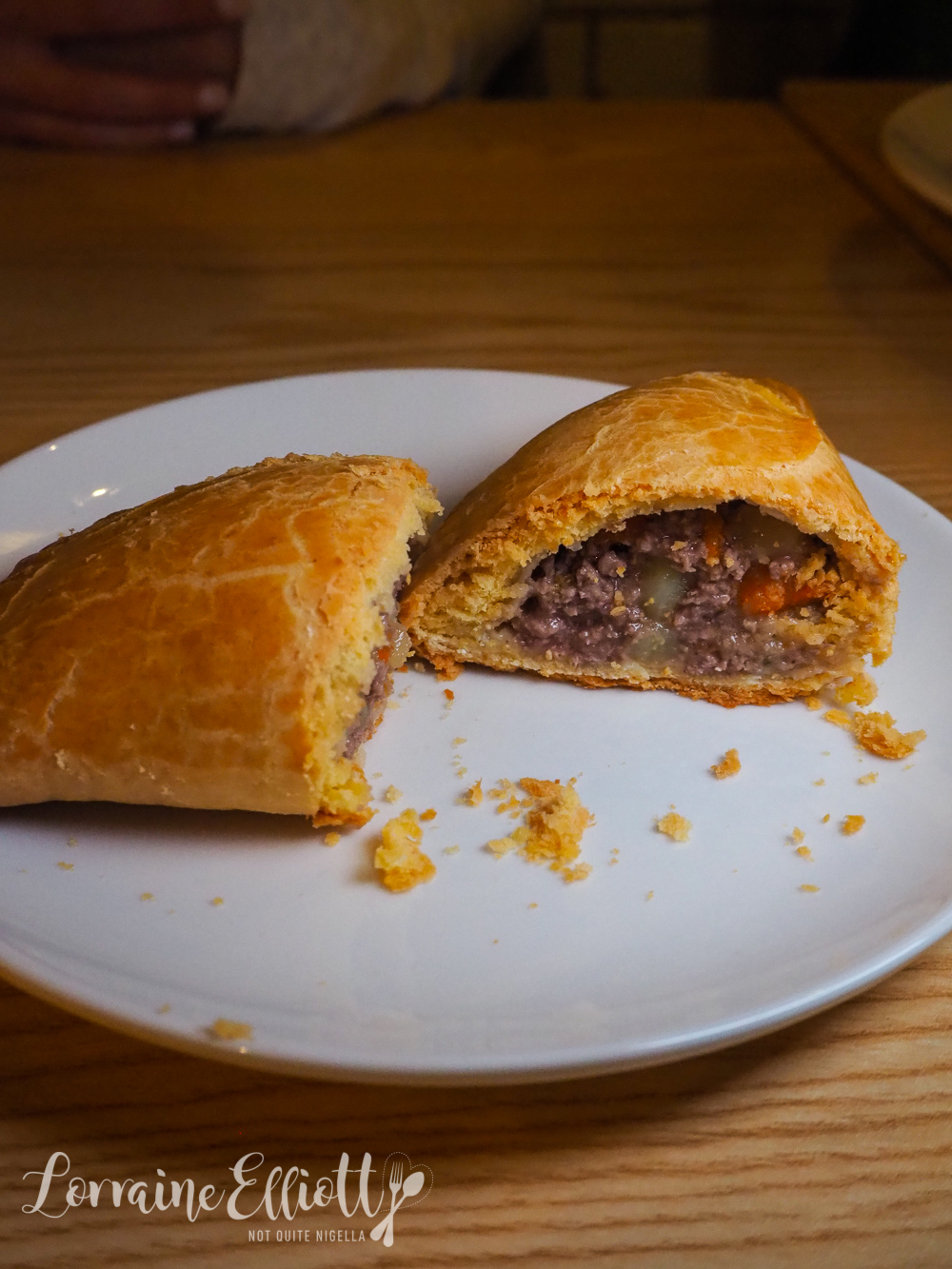 The meat pie is stuffed full of minced beef, potatoes and carrots. The pastry is short and these superbly tasty half moon pies have a delightfully juicy filling. It's the sort of snack that you can imagine grabbing to eat on the go and the pastry is perfect for that reason because there are no crumbs falling off when you bite into it that is a hallmark of a well made Nigerian meat pie. 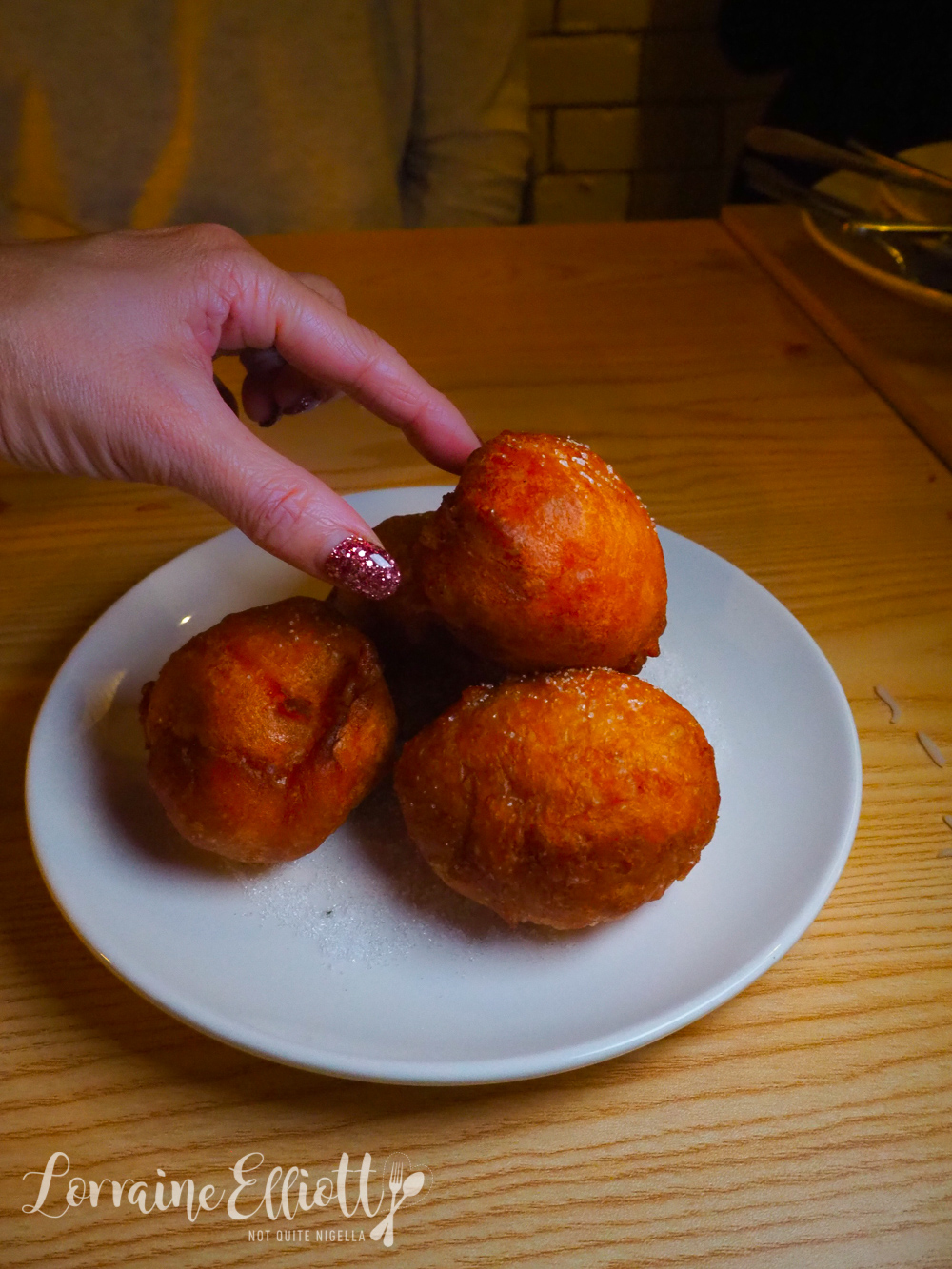 There are two items on the dessert menu: Puff Puff and Chin Chin (deep fried pieces of dough) We go for the Puff Puffs which are described as donut holes which they are but they're the size of a rather large donut. The texture is dense and spongy and they're rolled in sugar which we dredge our donut in again just for a little bit more sweetness.

So tell me Dear Reader, have you ever tried Nigerian food? Is there a cuisine that is completely new to you that you'd like to try?