Made From Scratch: Quince Paste or Membrillo 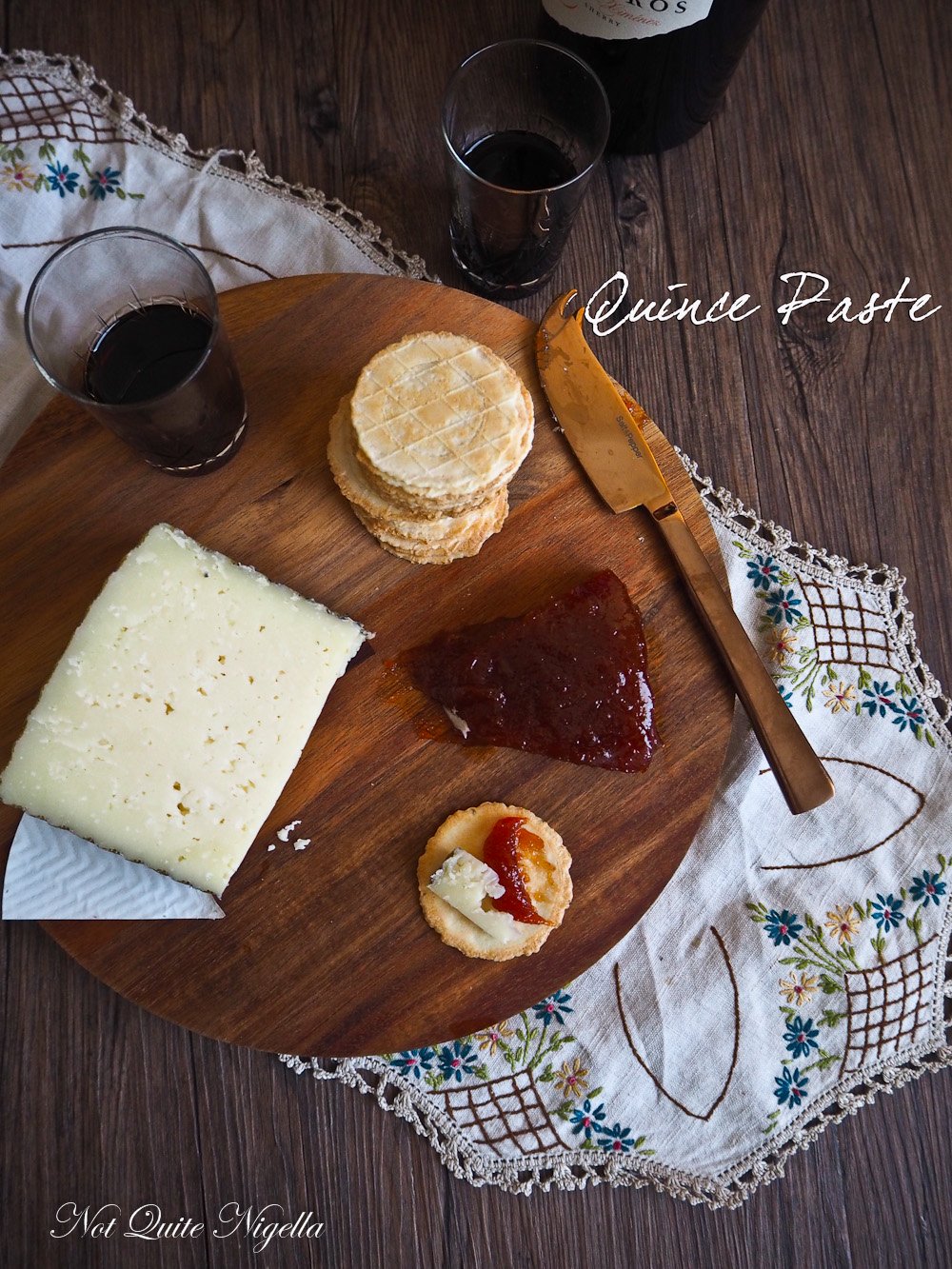 Quince paste is a labour of love requiring a lot of patience but once you try a home made quince paste, you may never want to buy it again. The trick to this quince paste is to cook it low and slow leaving the skin on to make the most of the pectin. I also used a French variety of quince paste that is less grainy than others (and use the less ripe ones as they have more pectin in them).

The other day Dear Reader, I made a mistake with my blog and accidentally scheduled a post for April. You see I had it in my mind that we were still in April. It's been that kind of year! Has it gone shockingly fast for you too? I'm normally really terrible with telling which year something happens (my answer is "A couple of years ago" for everything). The measure of the months is usually done with a month of In My Kitchen hosted by Celia but since I missed a month or two, I barely know which month it is! 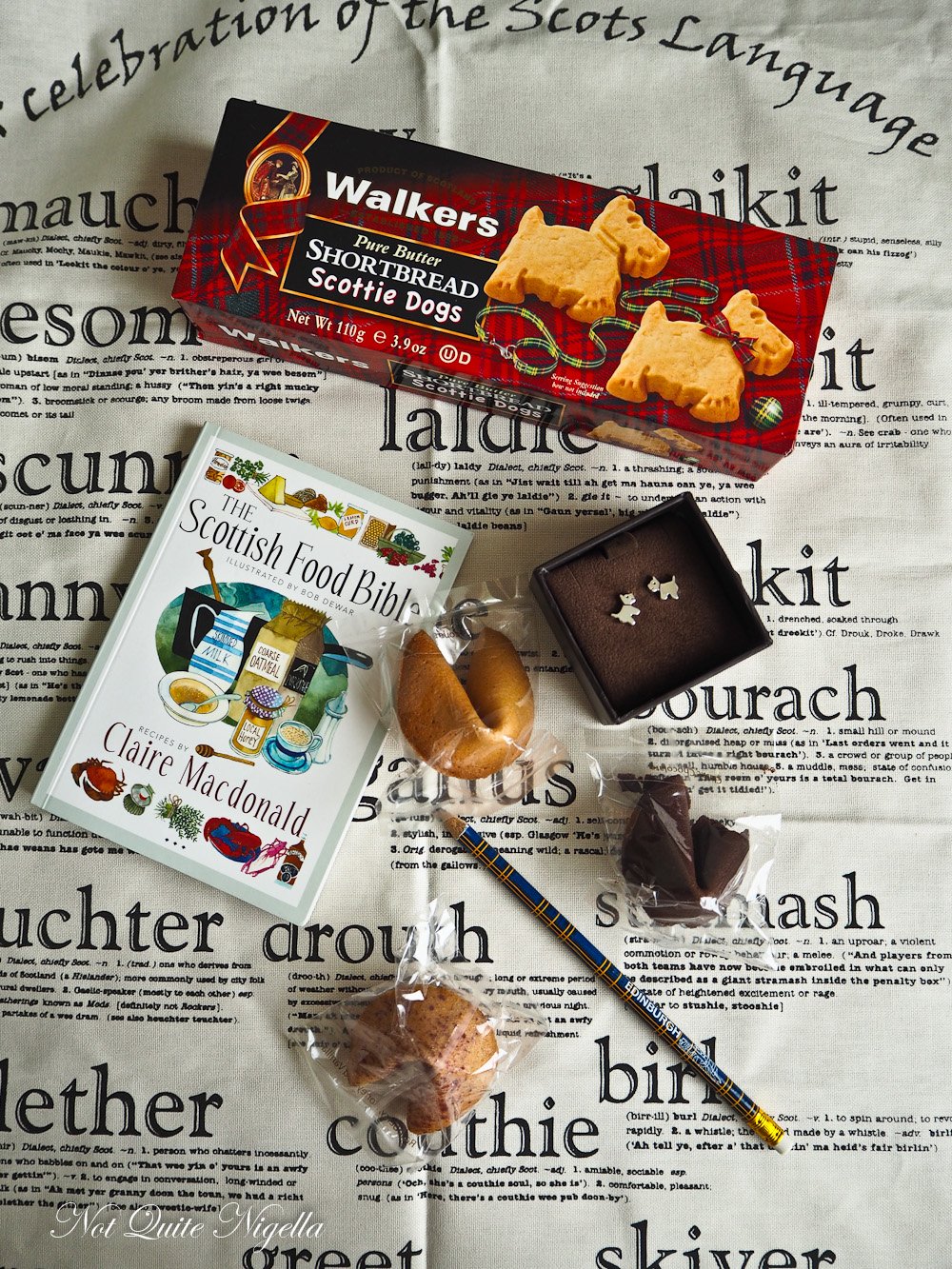 Anyway! I've got a lot of things to show you that are new in my kitchen. The first few things are from my recent trip to Scotland. I was lucky enough to meet with the lovely Vohn McGuiness from Vohn's Vittles when I recently visited Scotland. I came with some Australian gifts and she was kind enough to bestow upon me a most wonderful treasure trove of Scottish goodies! 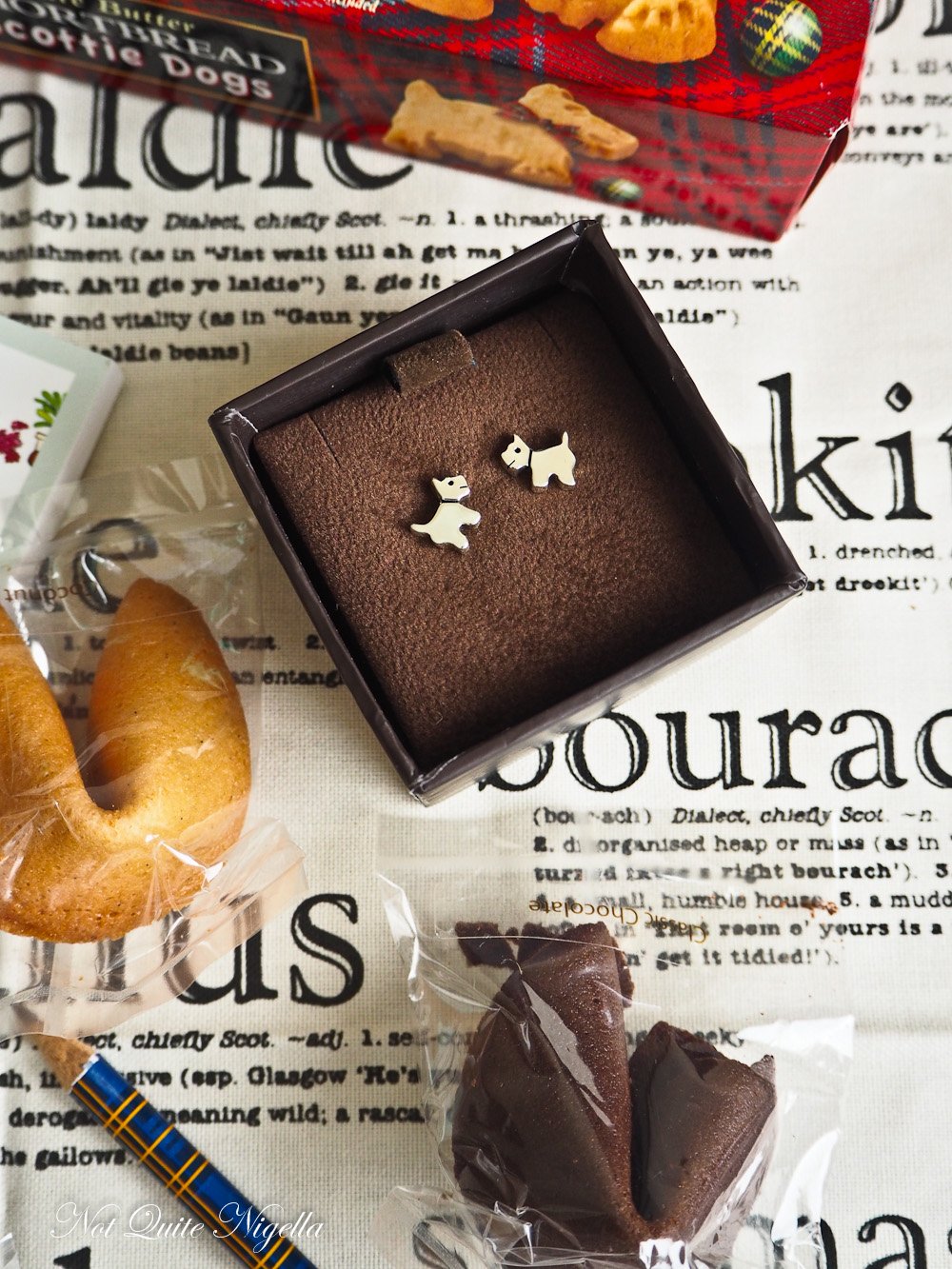 There's a Scottish tea towel explaining Scottish terms, a tartan pencil, Scotty dog shortbread (almost too cute to eat but we ate them!), the best fortune cookies ever, Scotty dog earrings (so gorgeous!) and a Scottish food bible which I will be using very soon. Our friends Louise and Viggo are holding a Eurovision party where we bring a dish from a particular country. I claimed Scotland as my pick - wish me luck making a haggis! 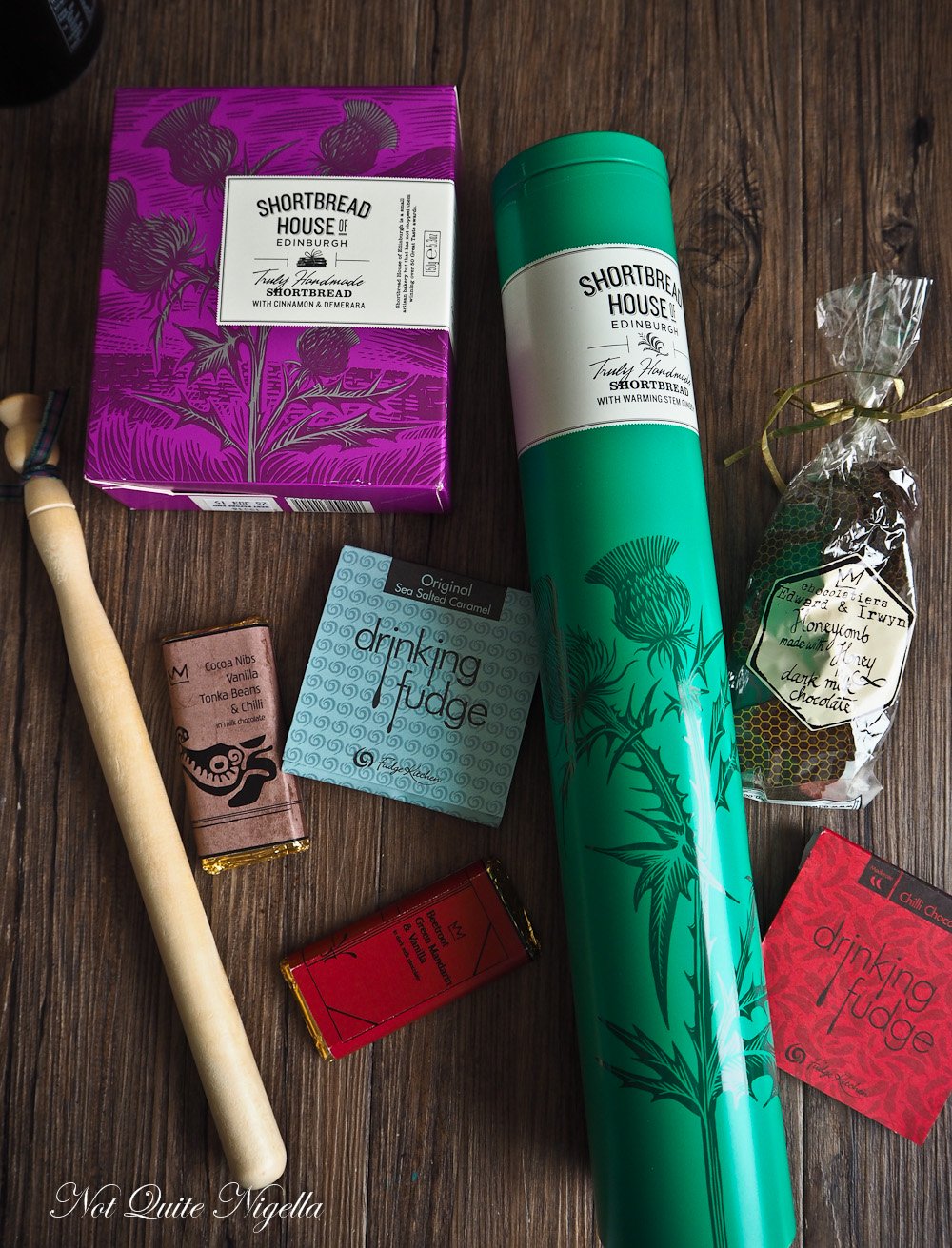 The next picture is a bunch of things that I bought on my trip. Can you see the wooden item on the bottom left? Well that is a spurtle, what Scots use to stir their porridge while they are cooking it! Most appropriate for this upcoming weather. There's also shortbread, chocolate and liquid drinking fudge - what a great idea that is and the chilli chocolate flavour was actually very spicy! 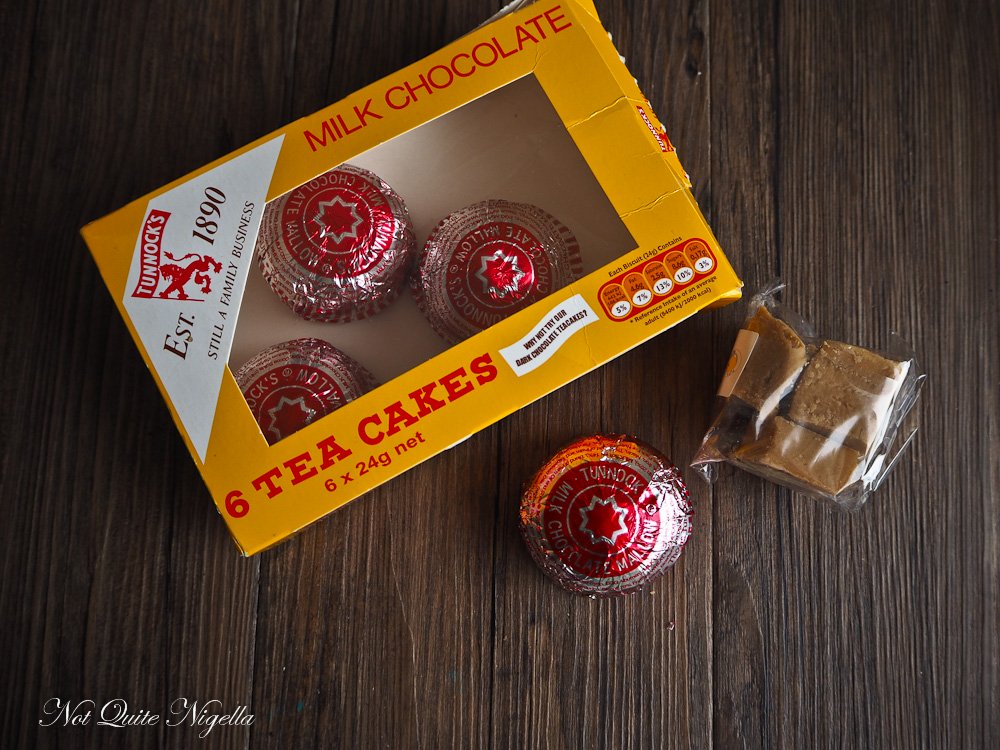 I was given a box of these Tunnock's tea cakes and I didn't realise that you can actually get these in the supermarket in Australia in the British foods section. How good are these? They're so delicious! Anyway, I had one a day while I was on my trip to Scotland (which is perhaps why my pants were so tight). There's also some Scottish tablet there which was a bit too sweet for me (says the women who hoovered up Tunnock's tea cakes, yes the irony is not lost on me). 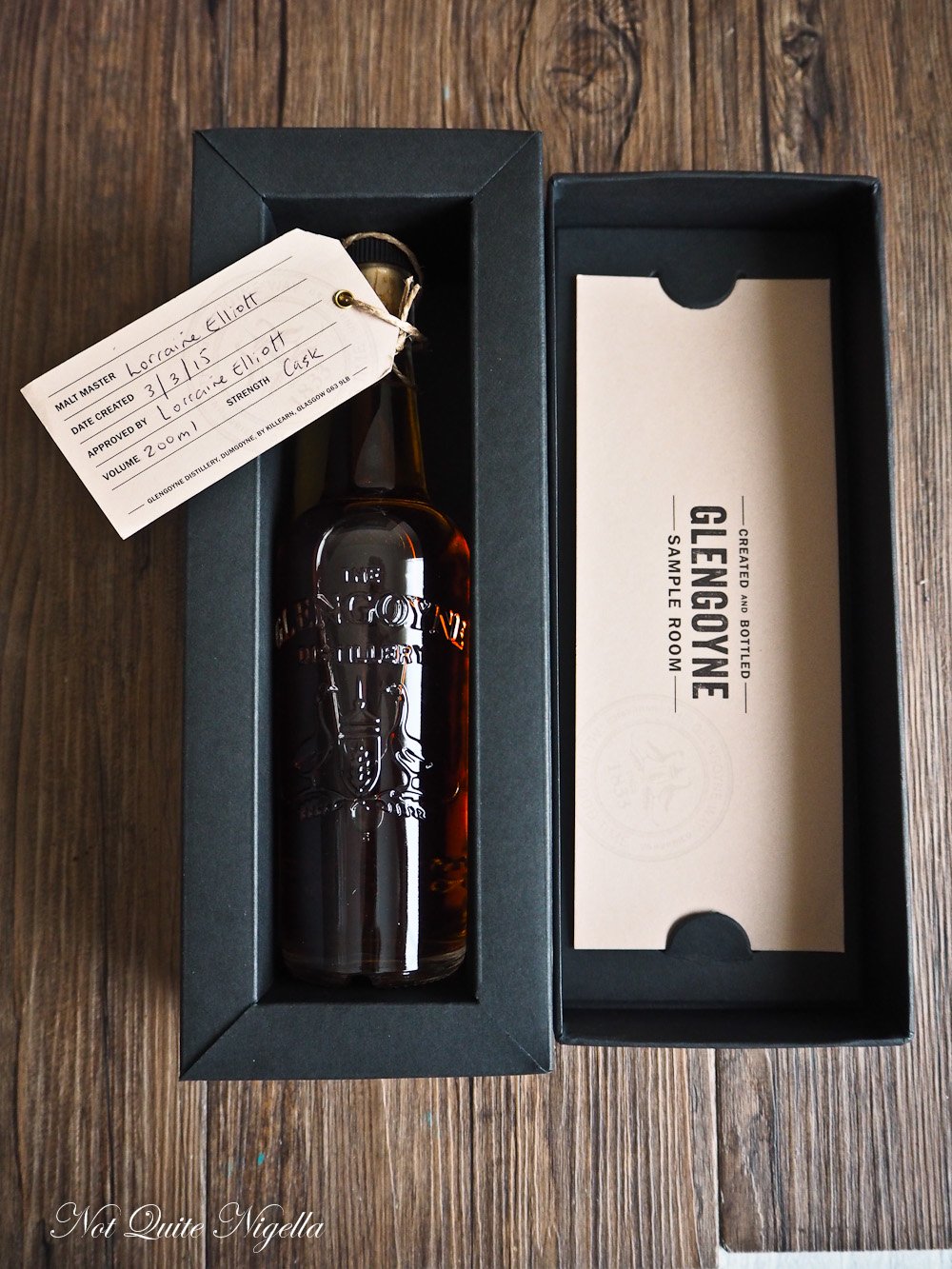 I blended some whisky! Yes did you know that I moonlight as a whisky blender? Well I did just once. We were given the opportunity to hand blend some whisky using single cask whisky. I don't think you could make a bad combo given how good Glengoyne whisky is but I was heartened when The Wizard, a whisky aficionado declared my blend in the top 3 he has ever tried. He may have been drunk though... 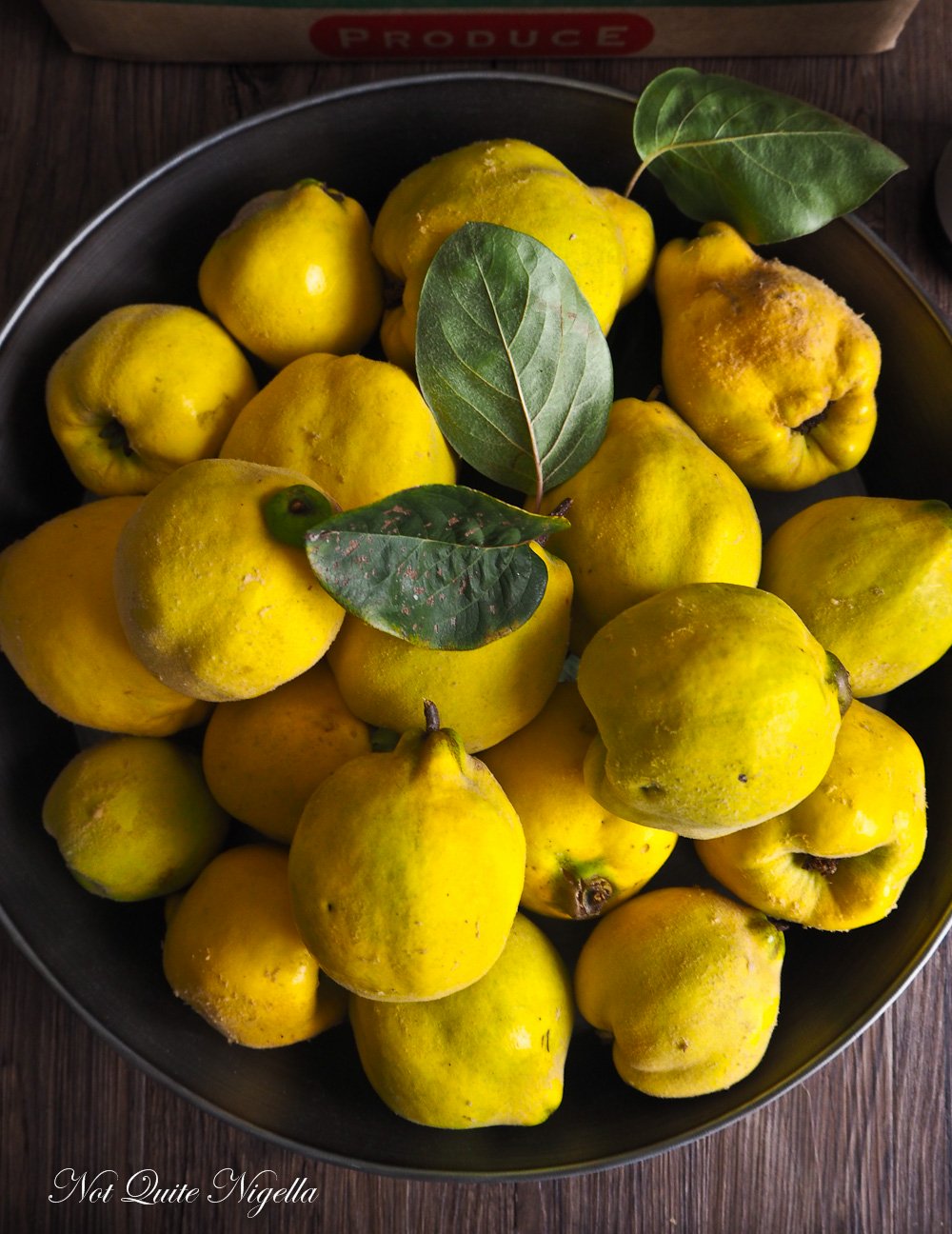 A little closer to home, I was given these quinces by Boutique Garlic's farmer Dougal Munro who farms old, rare and unique types of fruit and vegetables on his farm in Orange. These quinces are from a garden where they grew bountifully and he invited us to pick as many as we wanted. I was so excited as I've always wanted to make quince paste or mebrillo which I will show you below. 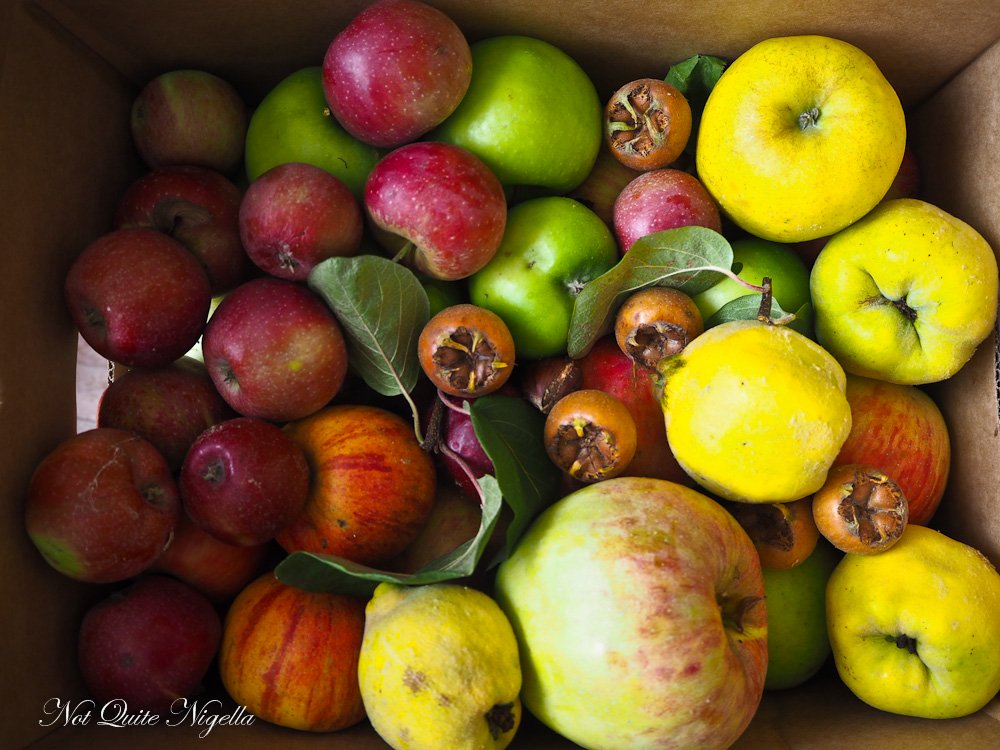 Also from his garden are these wild apples and chestnuts. Some of the varieties of apples aren't even known to him and we really enjoyed eating all of these types that we had never seen before! And see those small round brown fruit on top? They're medlars. They're so interesting because you need to "blet" them which means you put them in a brown paper bag and let them ripen until they look like they're about to rot. Then you eat them! I'm still waiting to see what they're like...

Anyway I did promise quince paste didn't I? And I give this recipe with some hesitation because it is not a quick recipe. Much the opposite really, this is the longest recipe I've ever made. In the vein of slowing down the year as much as possible I offer you this very much slow cooking recipe. But would it cushion the blow if I told you that this is the best quince paste I've ever had? I loved being able to adjust the flavours to this paste and added lots of lemon and vanilla to enhance quince's naturally tartish flavour. Indeed, if you just want to boil it all up and stop the process before you set it it makes the most wonderful yogurt or ice cream topping. Dougal's quinces are a French variety that are less grainy than normal.

The challenge with quince paste is getting it to set. To aid in this, we've used the quince, skin and all as well as lemon juice, lemon skins and lemon seeds - don't buy those seedless lemons which never seem as juicy anyway. And just wait patiently for the whole process to happen. It's not the kind of thing you can rush and the paste needs plenty of "low and slow" cooking. What results is a beautifully shaded firm paste that is perfect served with manchego cheese and crackers. 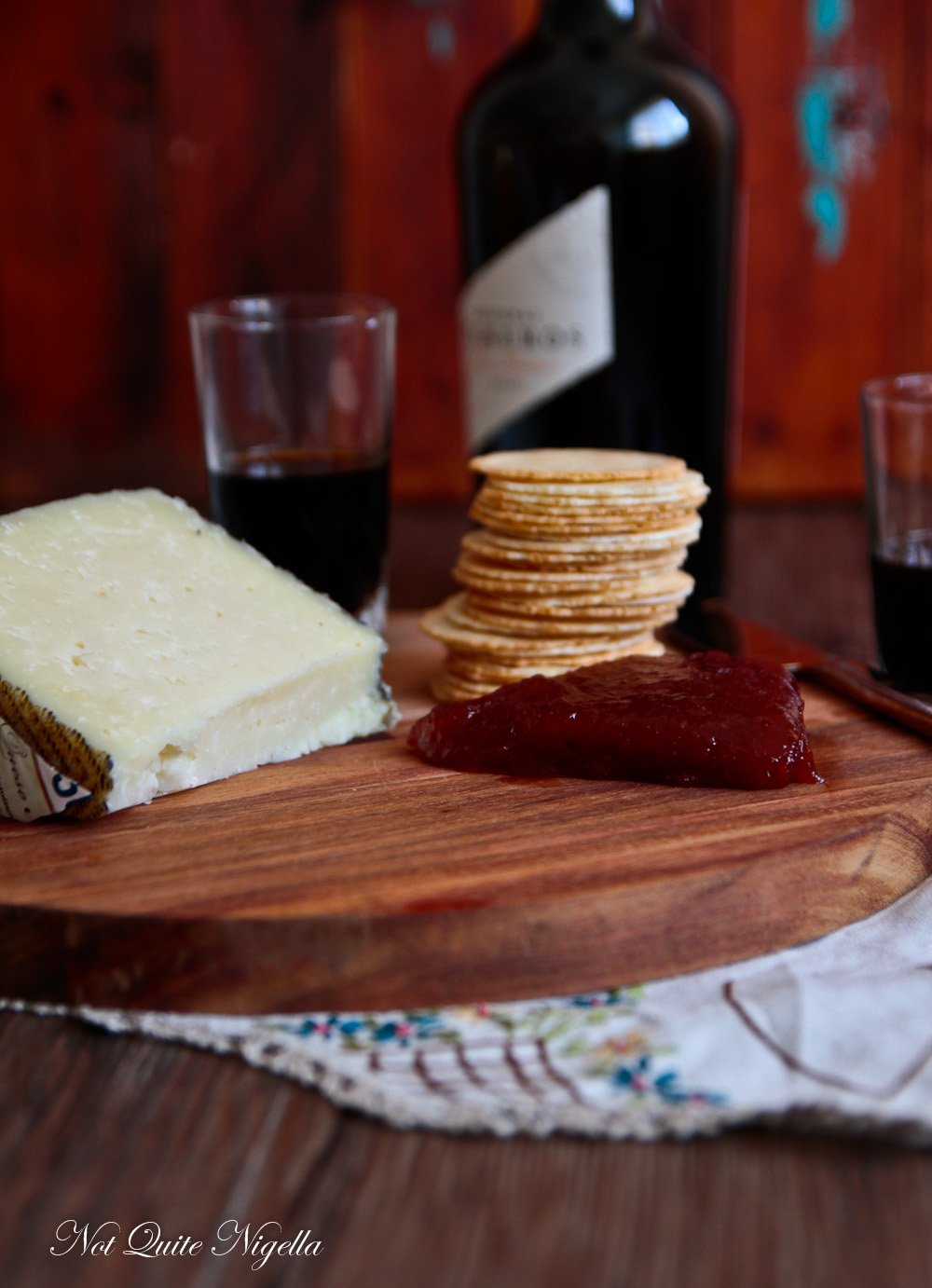 I must admit that I made a mistake the first time and didn't cook my quince paste enough. What resulted was in a two layer quince paste where the top was set but the bottom was still lava-like and oozy. So back it went in the pan and I cooked it further and then it went into the oven and then in the fridge. And did I swoon when I tasted it with manchego cheese and crackers!

So tell me Dear Reader, what is the longest recipe you have ever made and how long did it take? Have you cooked with quinces much? For me this is the first year that I've really done a lot with them!

Made From Scratch: Quince Paste 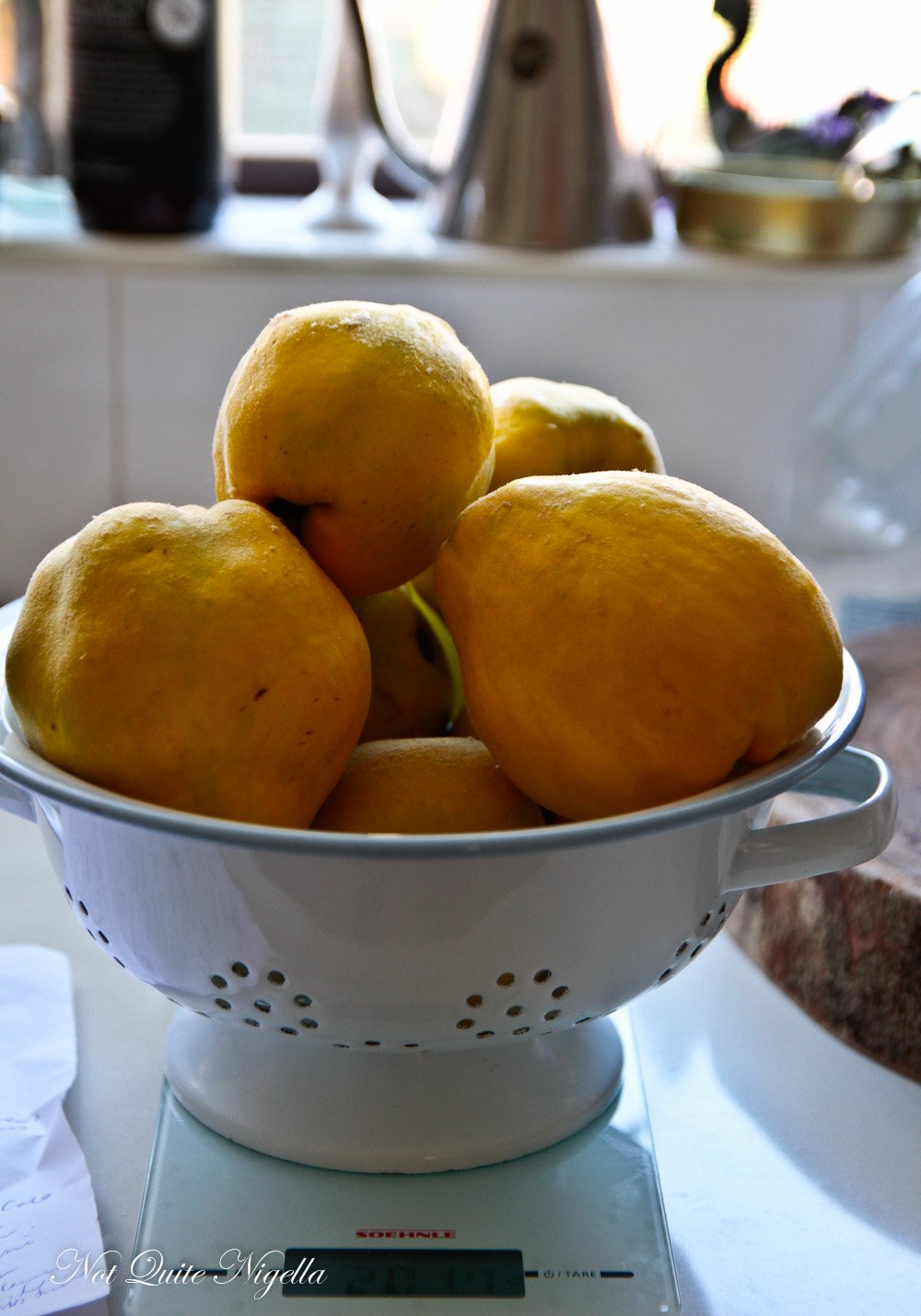 Step 1 - Leave the skin on the quinces but core and chop them roughly (reserve the cores and seeds for later). Place the quince pieces in a pot with the lemon peel and cover with water. Simmer until soft for 45 minutes or so. Drain in a colander. 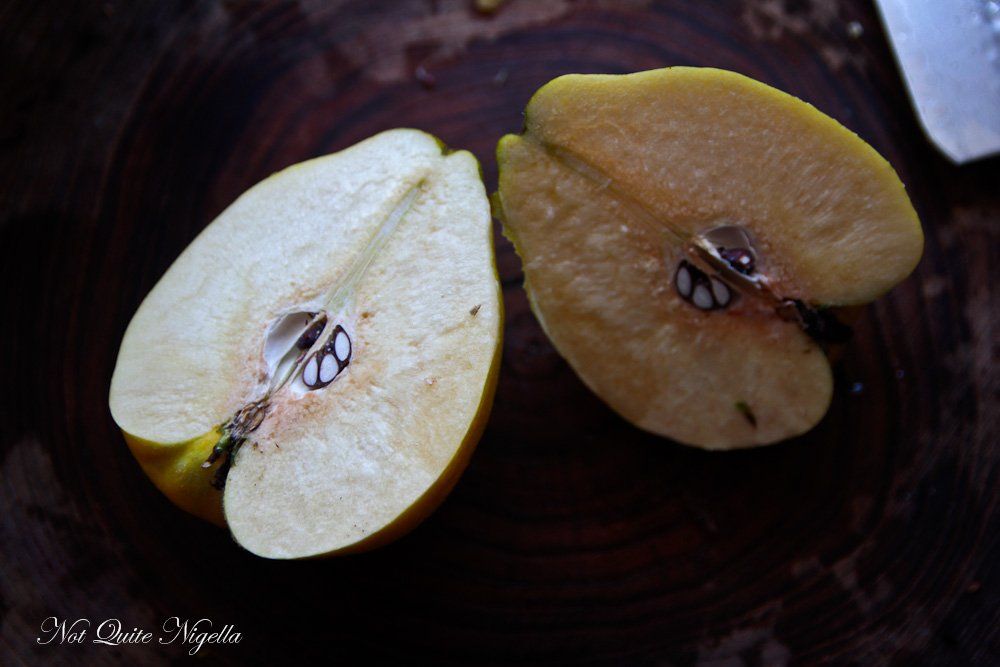 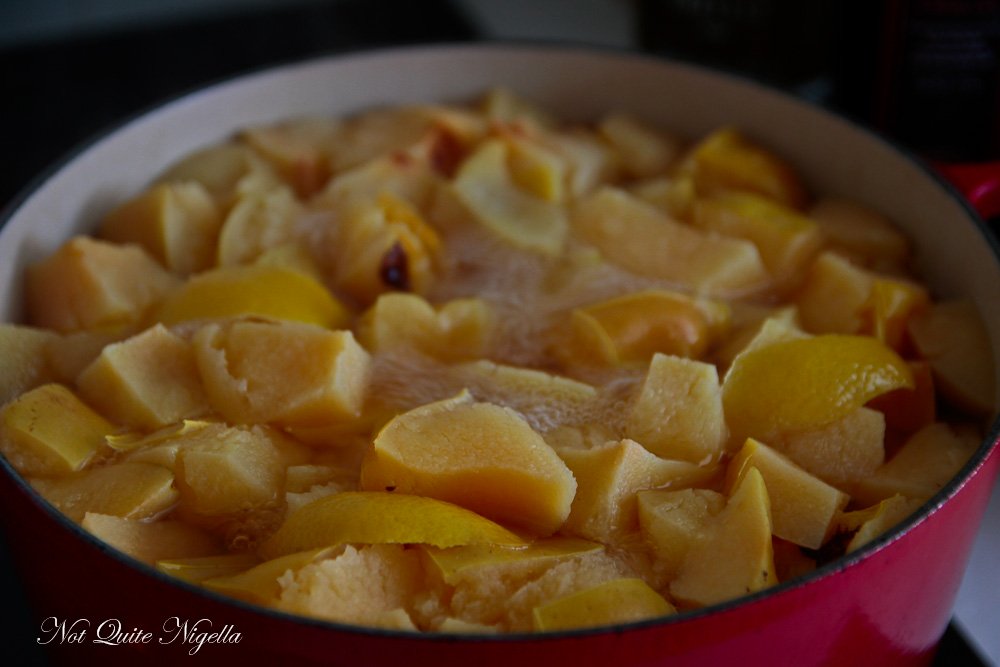 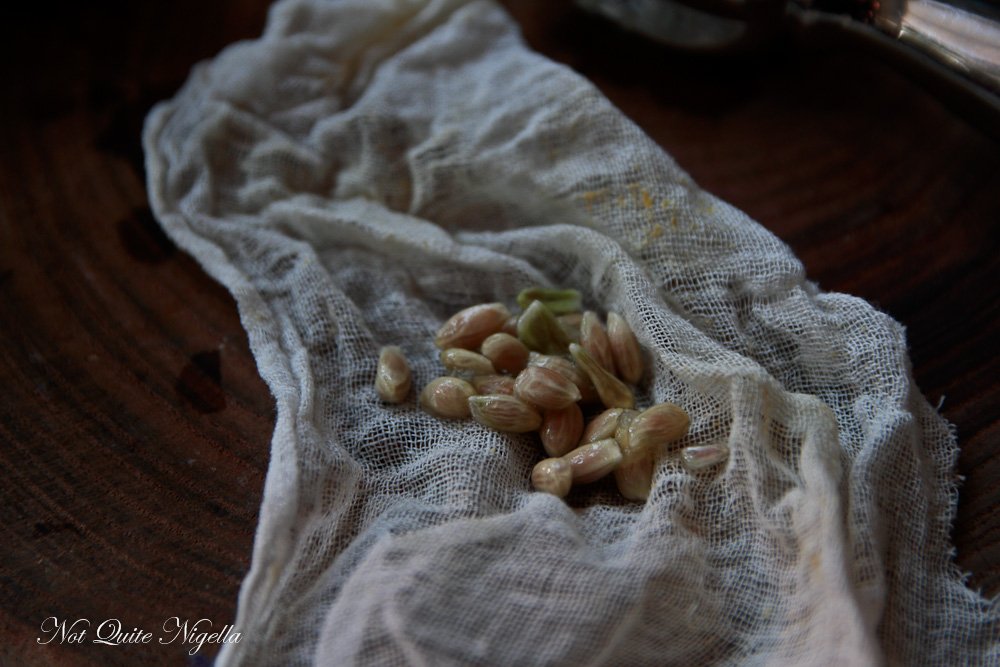 Step 2 - Place the quince pieces (with skin still on them) and the lemon peel in a food processor and process until smooth. Measure how many cups of quince puree you have-I got just under 6 cups of it. Place it into a large pot and add an equal amount of sugar as well as the lemon juice. Slice the vanilla pods down the centre, scrape out seeds and add these to the puree along with the scraped vanilla pod. Place the quince cores and seeds and lemon seeds in a muslin bag and tie up and pop into the pot (these contain pectin which will help it set). 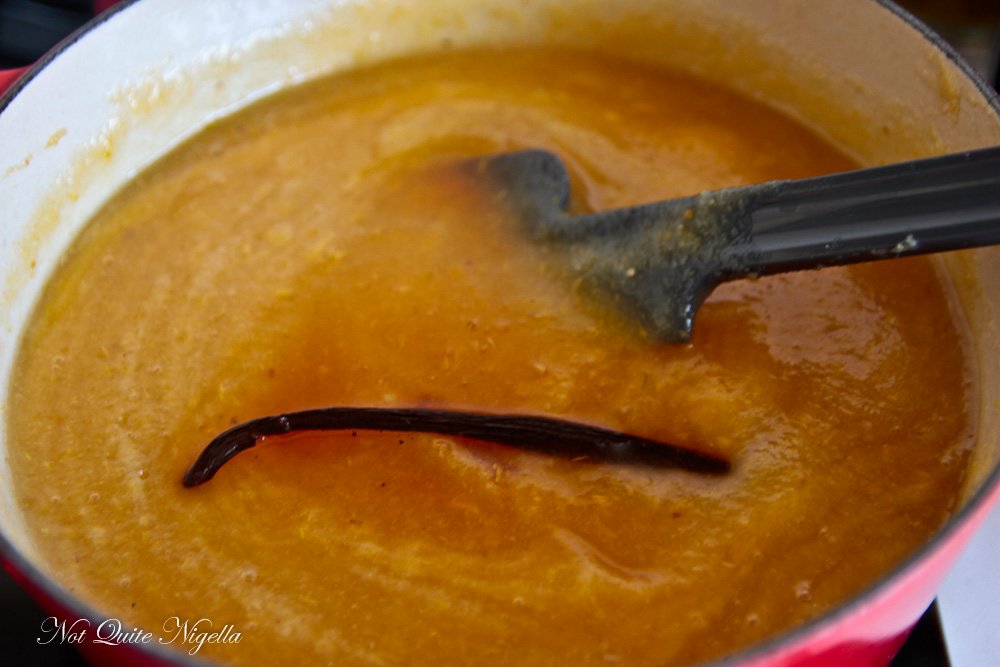 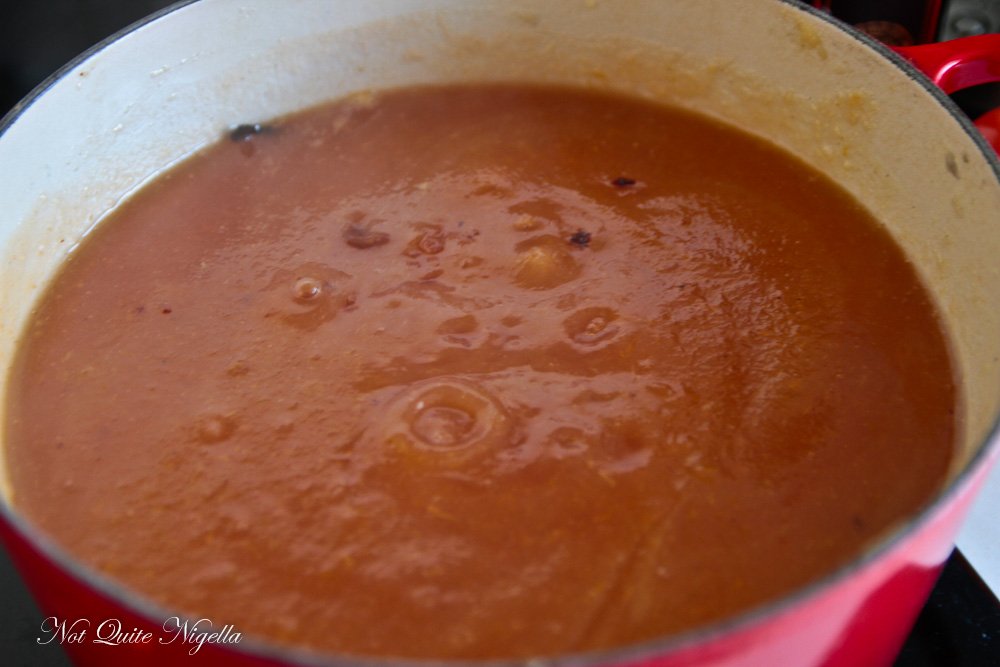 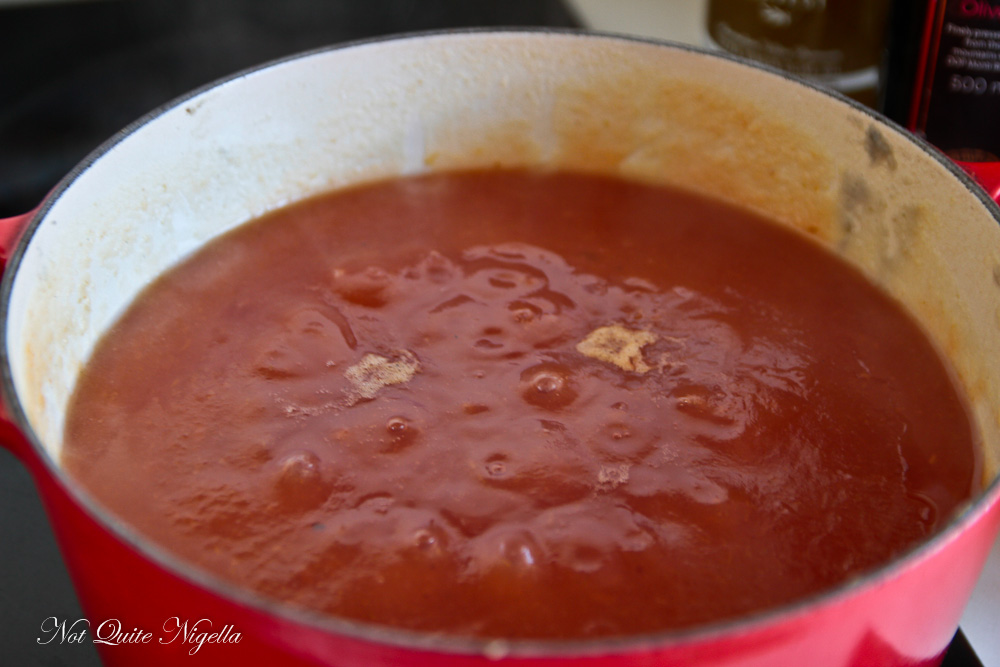 Step 3 - Simmer on a low heat stirring occasionally for about 3-4 hours until it becomes very thick. The thicker it is, the less time it needs in the oven if any at all. The quince puree will change colour. After about 2 hours cooking when it starts to turn a rich deep colour, it makes a wonderful curd-like jam and is fantastic on ice cream or with a nice vanilla flavoured Greek yogurt. But to make the quince paste you want it dark, dark deep red so keep going on low (if you take it too high, it will spit everywhere and I mean everywhere, I was cleaning every surface). 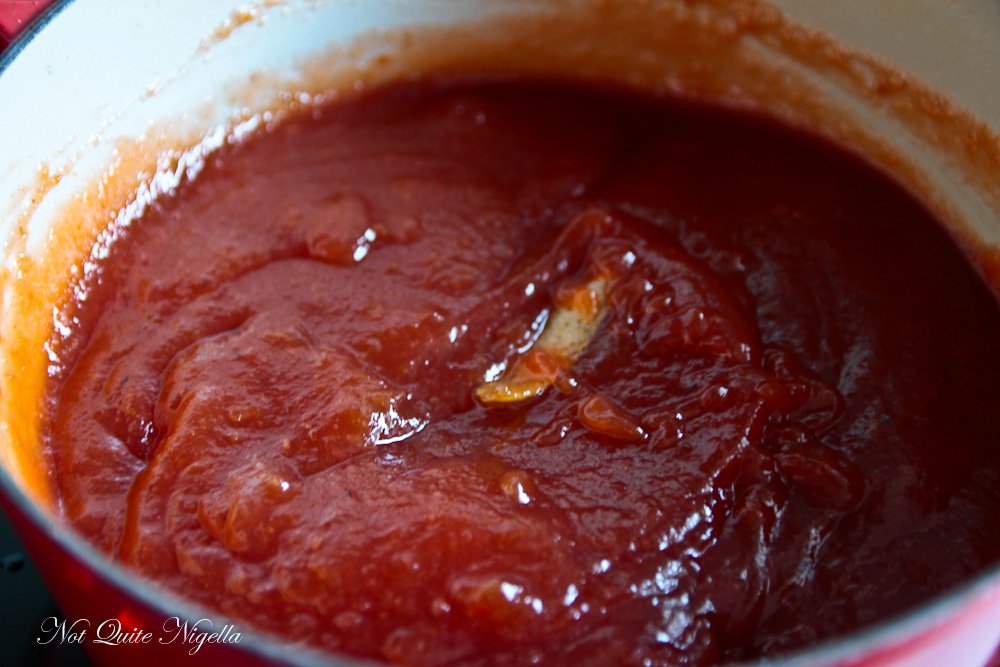 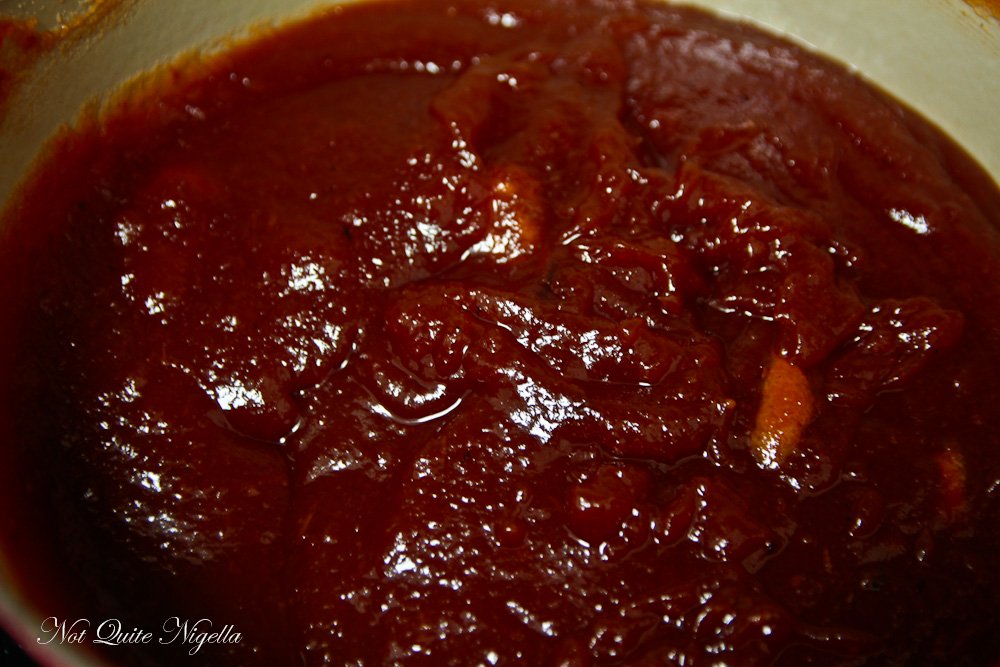 Step 4 - Line 2 8x8 inch square oven proof baking tins or 2 round oven proof baking tins with parchment and pour the hot quince puree into these, not more than 2cms or 3/4 inch thick (the tins will become hot so be careful) and jiggle a little to smooth down the top. Or place in individual ramekins. Place the baking tins in a 52C/125.6F oven for 7-8 hours until it has dried out and has set completely. Refrigerate for 4 hours and then slice. 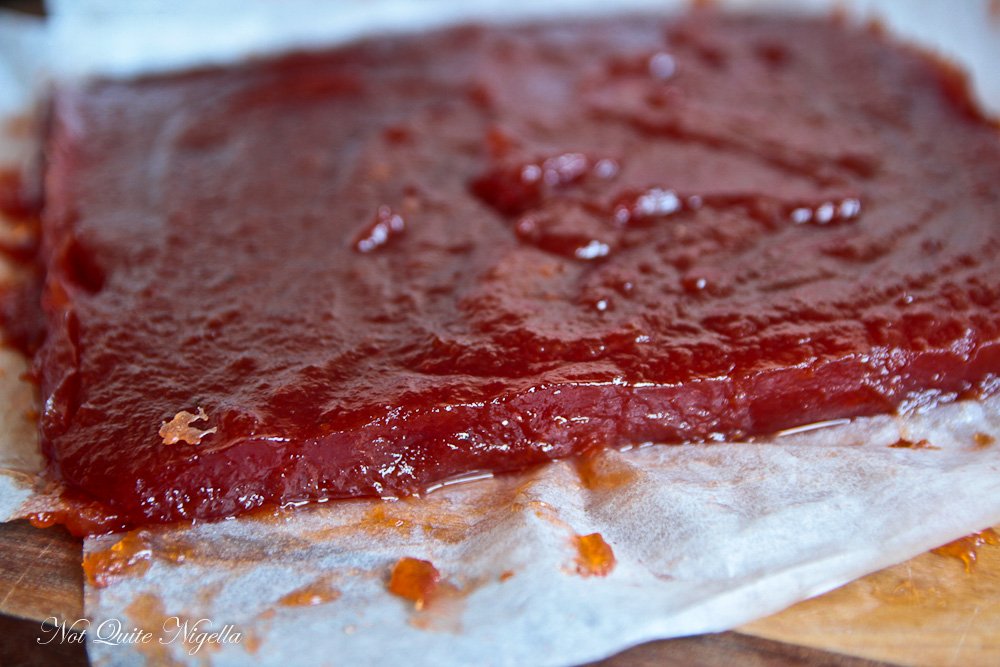