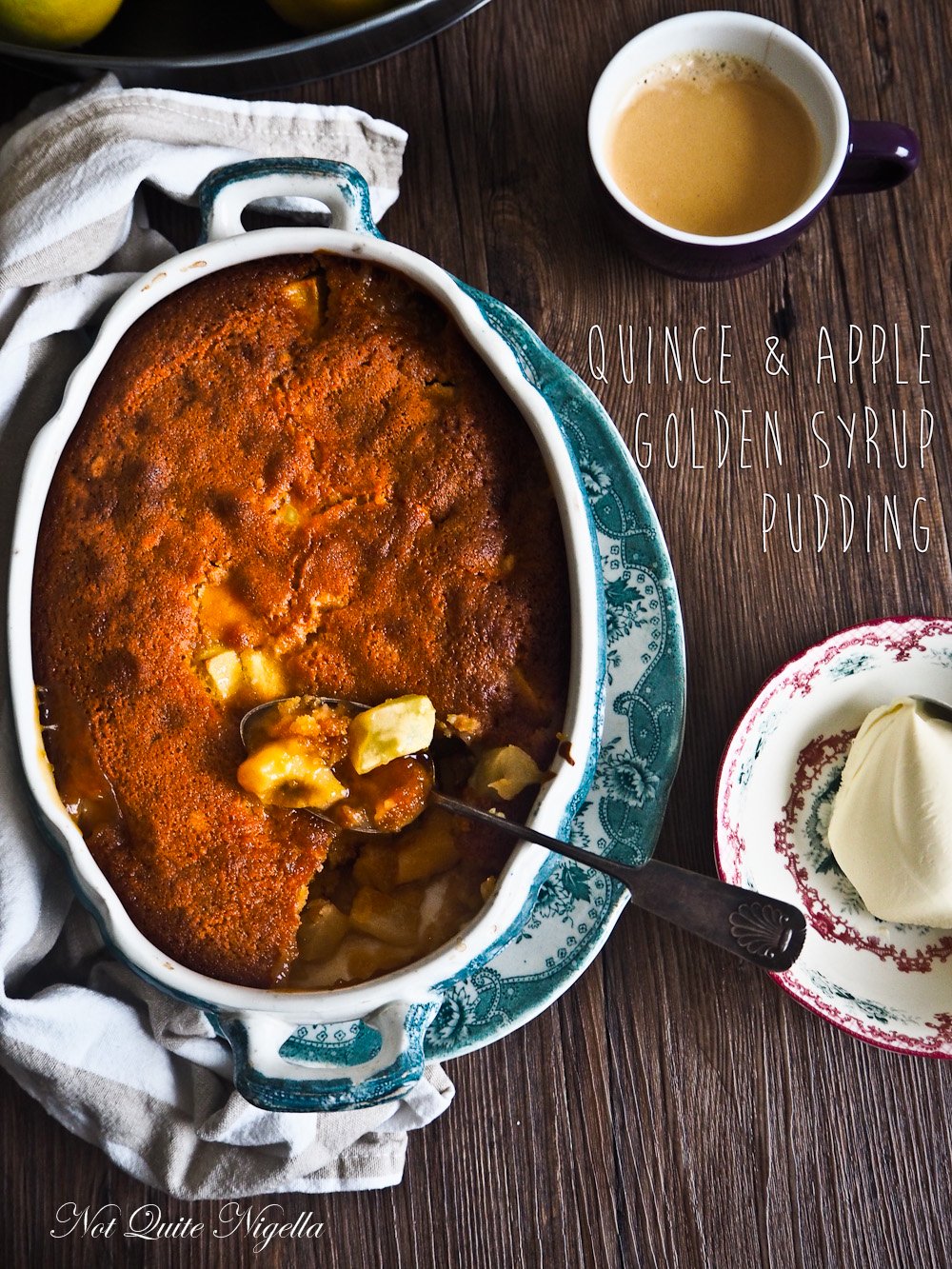 This heavenly quince and apple pudding was so good that we made it two nights in a row. The base is made up of tender pieces of quince and apple and it is topped with a light, buttery golden syrup topping. The bonus is of course the butterscotch sauce that sits at the bottom of the dish making this a one pot wonder.

Dear Reader I have a question for you today. Do you identify yourself closely with an animal? Is there one that you mimic the habits or even looks of? For me, it is a mixture of animals. Cats because of looks and pomeranian for its personality.

One evening, Mr NQN came home a bit tipsy after being out with his friends. He was eating dinner, a Greek style shepherd's pie when he picked up his phone.

"I want you to listen to something," he said mysteriously with a smile playing on his lips. He played three samples. 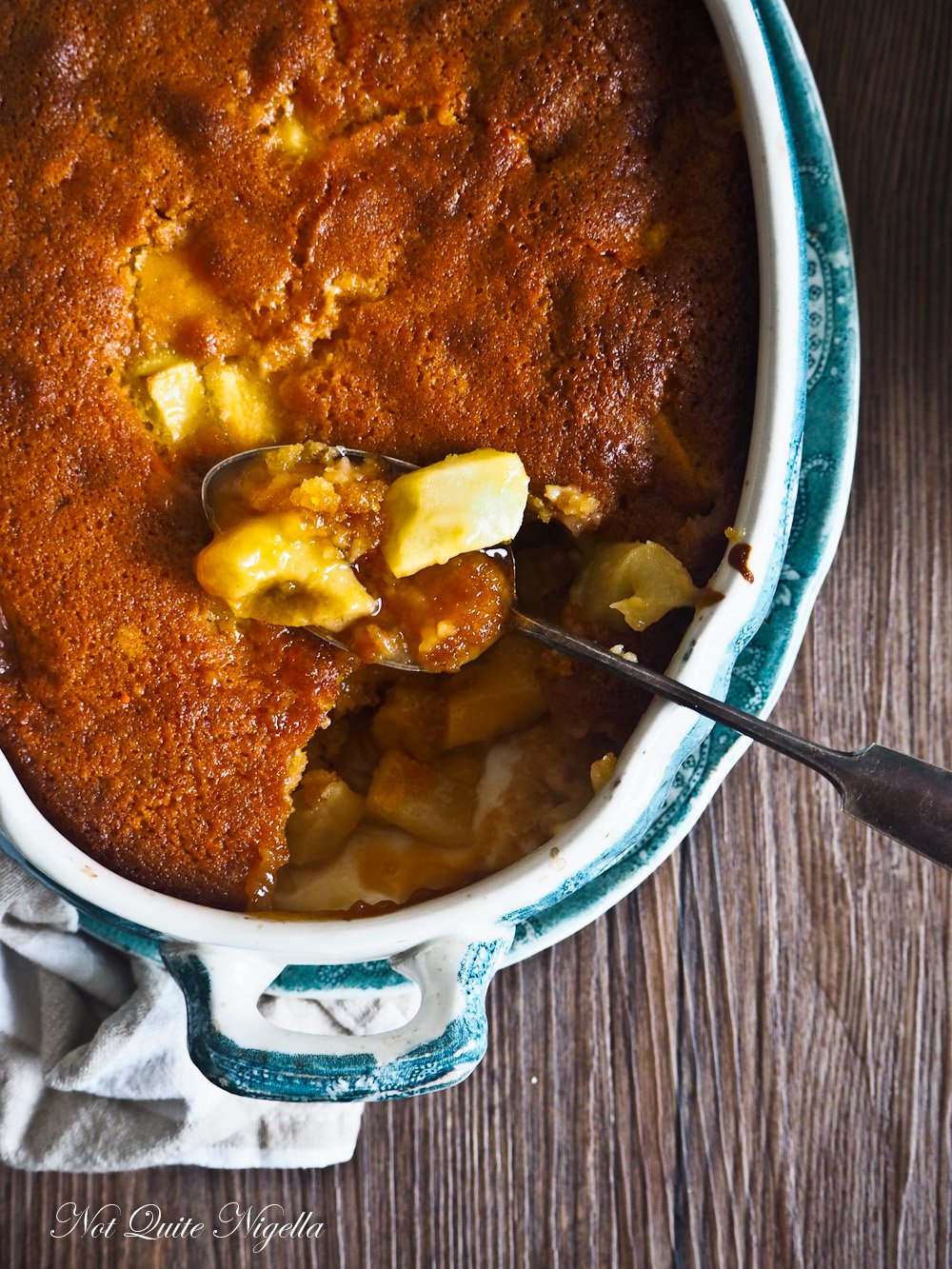 My heckles raised immediately. "What is that?", I demanded. It was slightly irritating and quite strange. "Have you become addicted to My Little Pony?" I asked him. "What is it? Turn it off!" I said by the time the third music sample rolled around.

"Oh I thought you'd like it. It's music for cats," he said rather dejectedly. Yes you see scientists have found that there is music that cats like. While music for humans resembles a heartbeat, music for cats resembles things they might like. I don't have a cat to play it to but I'll take their word for it. And I also discovered that I wasn't a cat at all really based on my ornery reaction to the music.

I also like puddings, apples, quince and golden syrup. Things that my cat didn't care for much (okay it liked golden syrup but everyone in their right mind does). I first saw the idea for this from Stacey from Veggie Mama. She's a sassy, fabulous and sweet gal who interviewed me a short while back on her blog (check it out here). She put it on her Instagram and I started drooling immediately and asked for the recipe. She delivered the next day and I decided to use up some of the quince I had left from making the quince paste and some apples that I got from our trip to Orange.

I decided to make it a self saucing pudding because sauce is always a good thing and we served it with thick cream - I don't want to be bossy but this is totally mandatory to get that eyes rolling in the back of the head with bliss sensation which is really what we look for in a dish! ;)

So tell me Dear Reader, what animal do you identify with the most? What is your favourite music genre or style? And do you ever eat something and it makes your eyes roll back in your head with bliss? What was it that you ate? 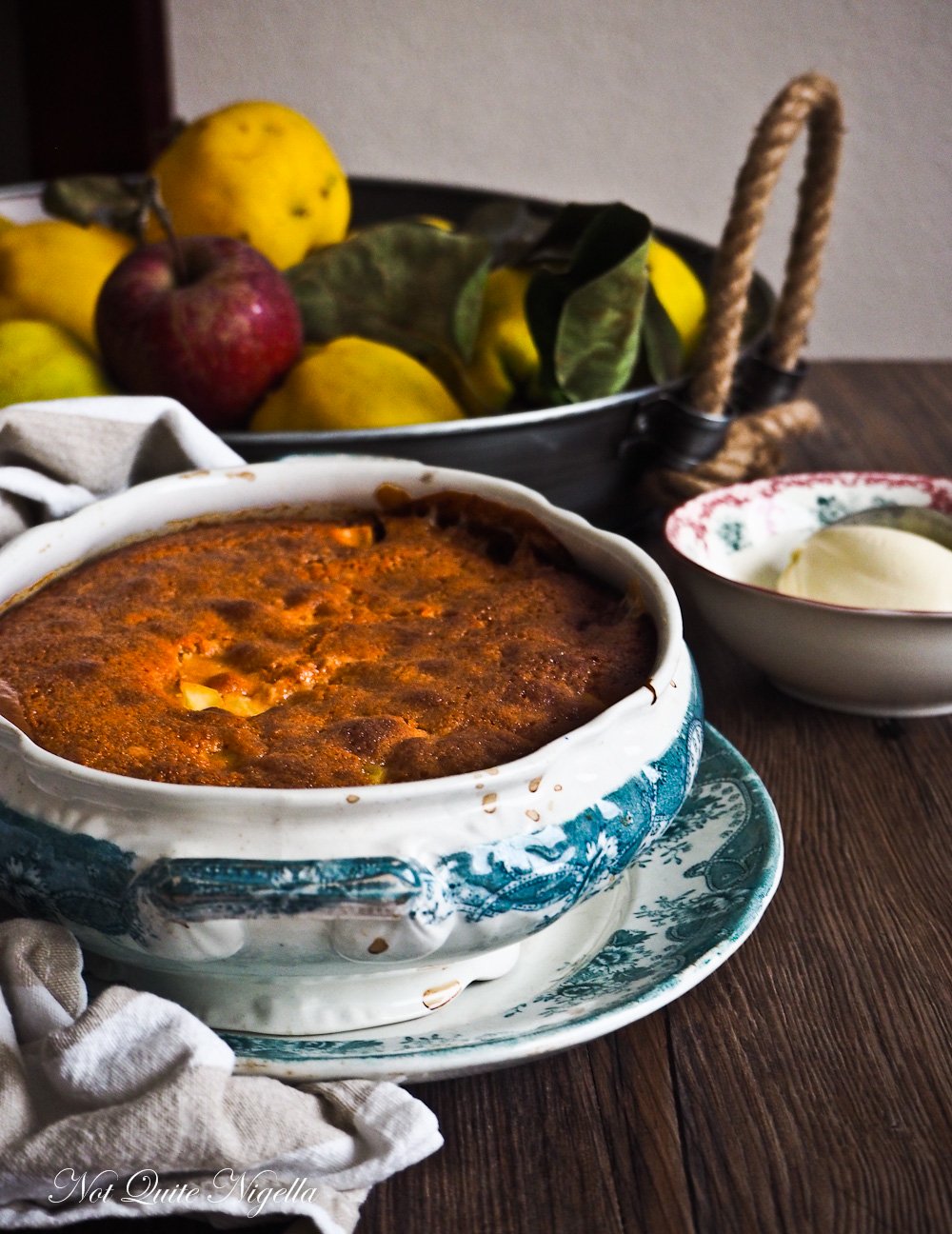 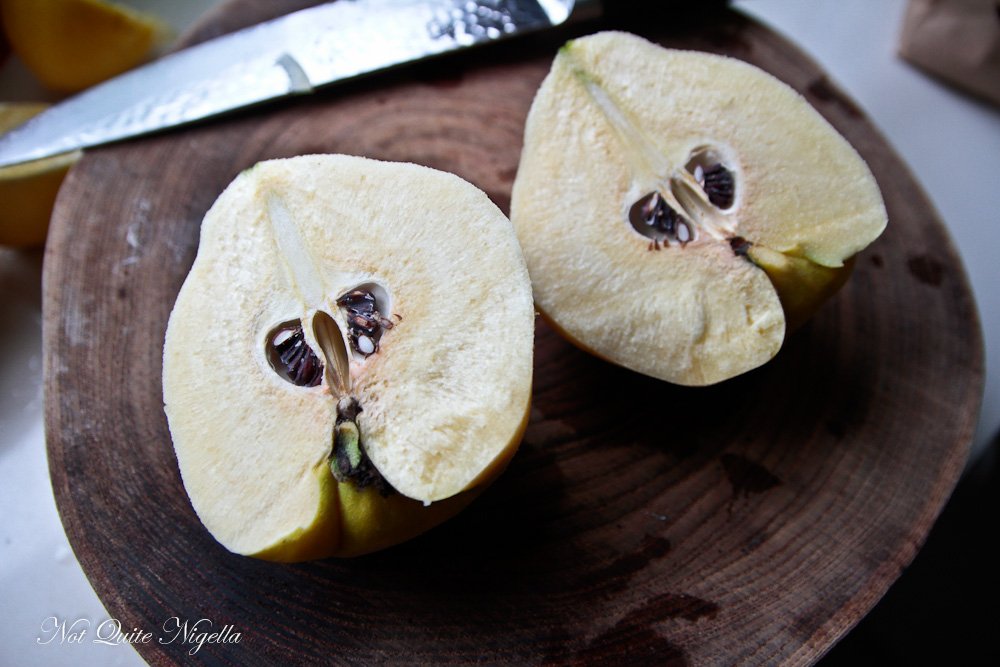 Step 1 - Preheat oven to 180C/350F. Peel and core the quince and cut into small pieces and place in the bowl of lemon water. Do the same for the apples. 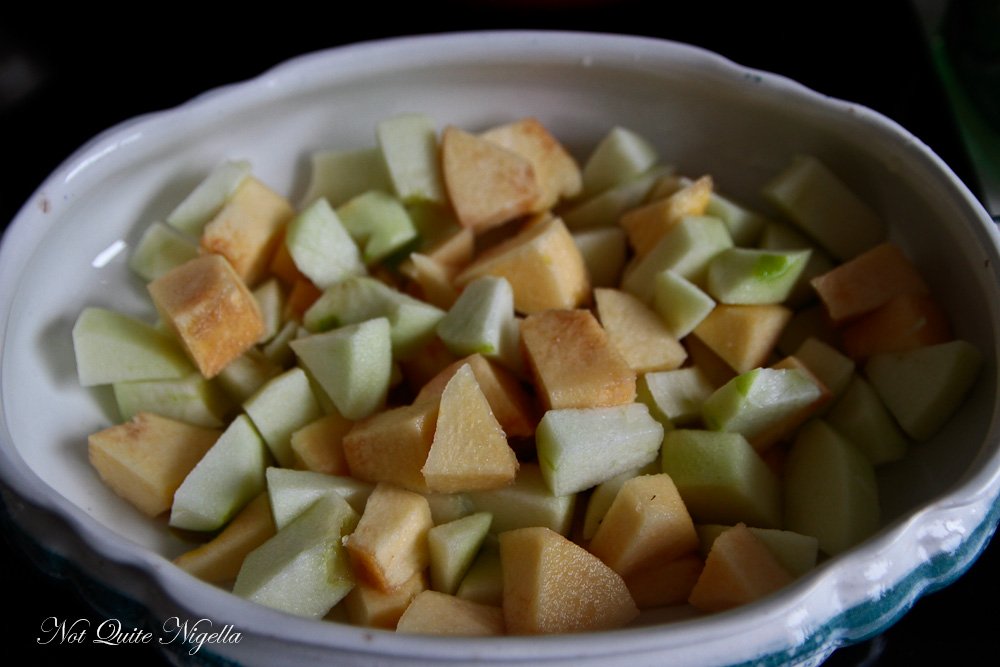 Step 2 - Mix the butter, sugar, egg, vanilla bean paste and golden syrup together. Then add the flour, baking powder and milk to form a batter. Set aside. 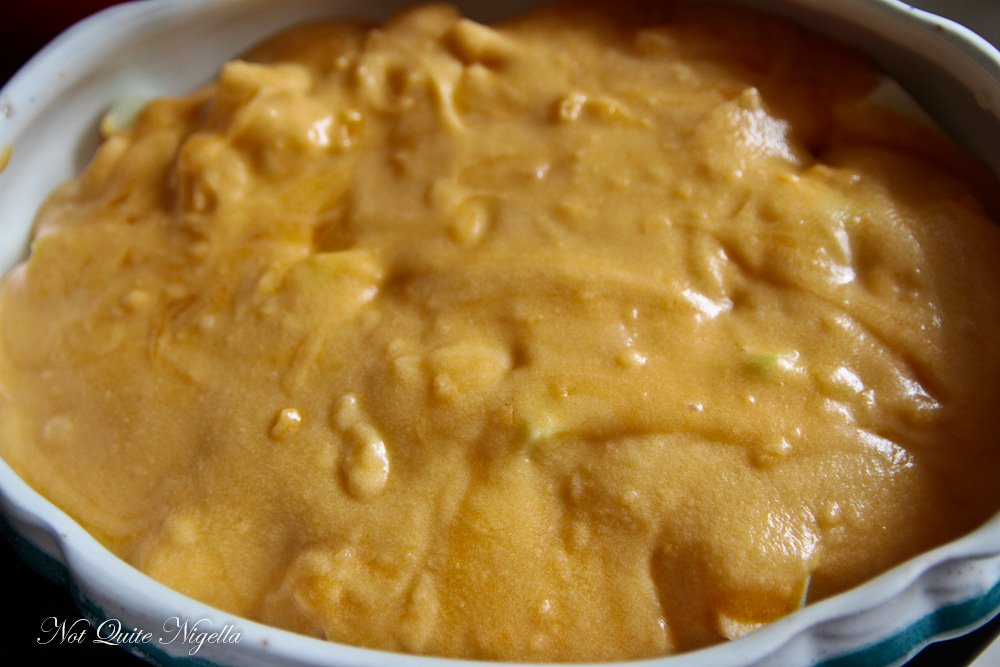 OK this is not an attractive pic 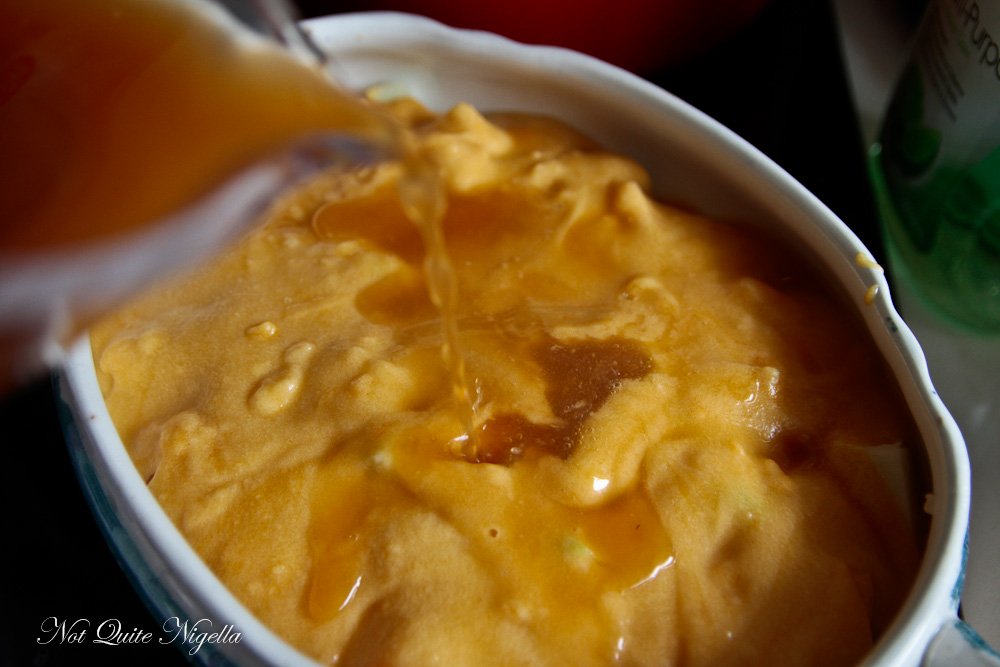 Step 4 - Drain the quince and apples and place in the baking dish. Top with the thick batter and smooth over the top as best you can (you don't need to be precise). Then pour the sauce mix into the batter where it will settle at the bottom. Bake for 50-55 minutes. Check after 40 minutes, if it is looking a bit too brown, turn down the heat to 160C/320F.