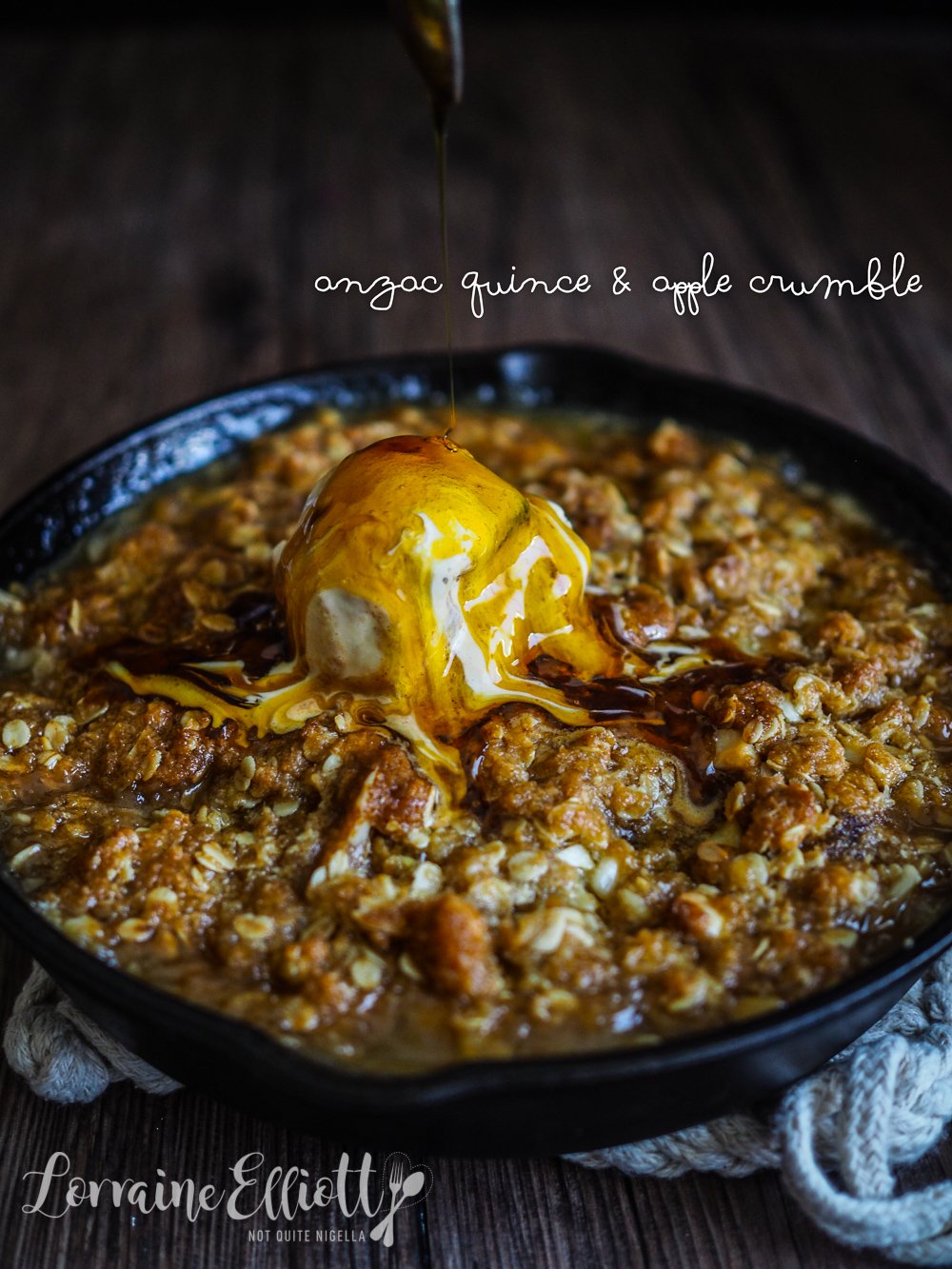 What started out as a little experiment turned out to be an absolutely delicious ANZAC biscuit themed dessert. A bed of spiced quinces and apples are topped with a brown sugar, coconut and oatmeal butter topping. Don't just save this for ANZAC Day and if you love the ANZAC flavour and desserts on the sweeter side, this is a pushy recipe!

On Thursday is ANZAC (Australian and New Zealand Army Corps) Day, a day for remembrance and to honour those that fought in the first world war and all that serve in the military. And that is the time when we bake ANZAC biscuits. These treats are made with oats, flour, brown sugar, coconut and golden syrup and are simple but one of the tastiest biscuits you could ever eat. Some say they were sent to the soldiers and they transported well because the ingredients don't spoil easily and they are sturdy enough to withstand travelling around the world. However they were more commonly used at fundraisers as they are today. In fact they fiercely protect the recipe and name for these biscuits and commercial manufacturers have been warned against deviating from the original.

A crumble using ANZAC flavours was the suggestion of a lovely reader, and with the oats, flour, butter and golden syrup it had to be good. I love anything with a streusel or crumble top and when this was made I found myself helping myself to spoonful after spoonful of this. And I don't even like overly sweet food! I do however love crumble, oats, brown sugar and butter and this has plenty of that. I promise that when you pull this out the oven, you'll find it hard to resist the caramel that bubbles around the edges. 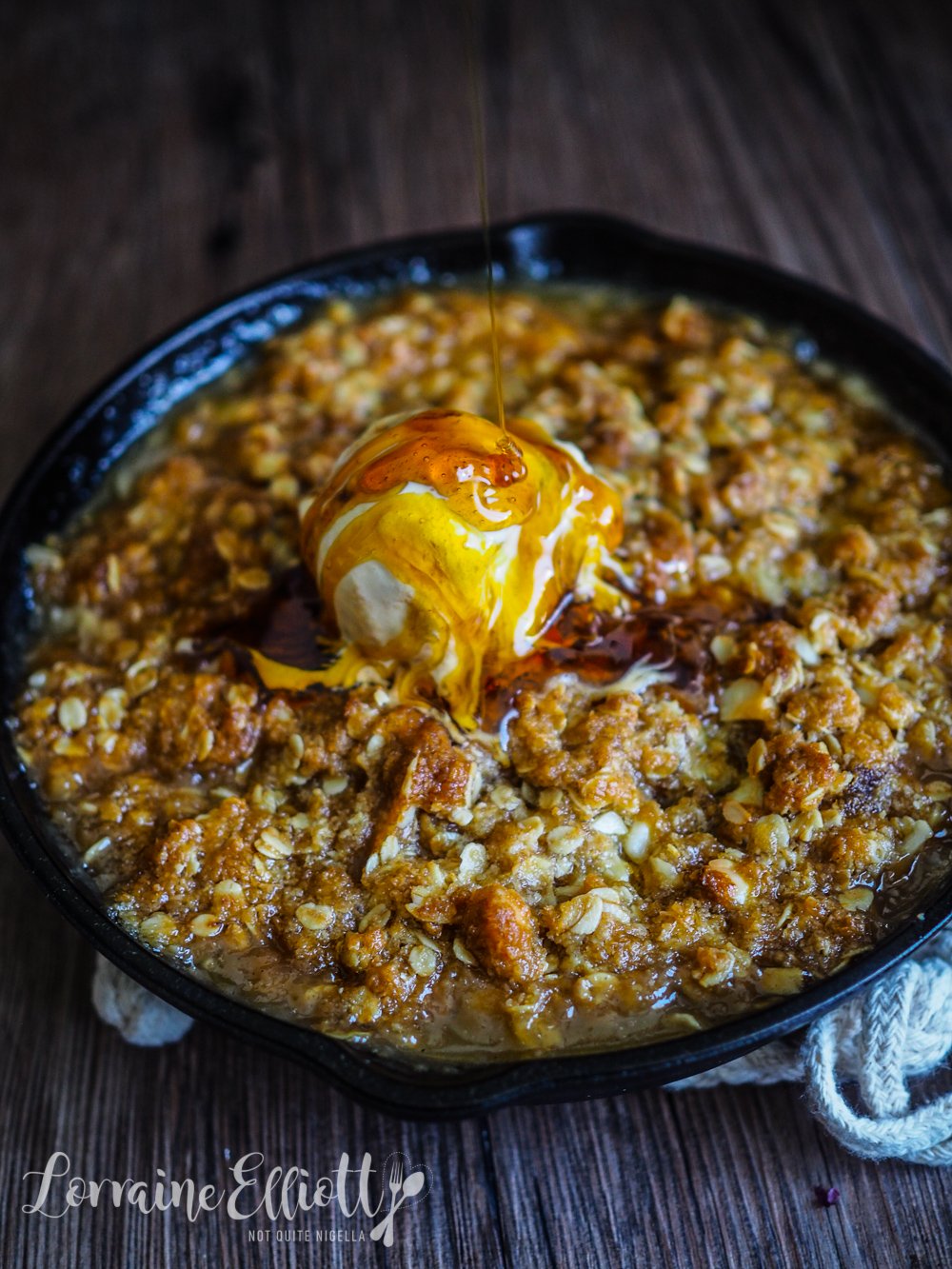 With the Autumn weather we're seeing the end of lots of lovely summer fruit. The last of the peaches are still around, their prices climbing in relation to their scarcity. Soon plums and figs will disappear and we'll be eating pears, quinces and apples.

I had some quinces I was given in Oberon where it is a few degrees chillier. While apple crumbles are common, I made a quince and apple crumble just based on what I had in my fruit basket that needed using. You can make this using whatever fruit you like-make it all apples or use whatever fruit is in season. That got us to talking about fruit over dinner one night.

Ryan threw out the question, "What is your favourite fruit?". I answered definitively, "Fig". Not only are they luscious but they are beautiful and unlike any other fruit. 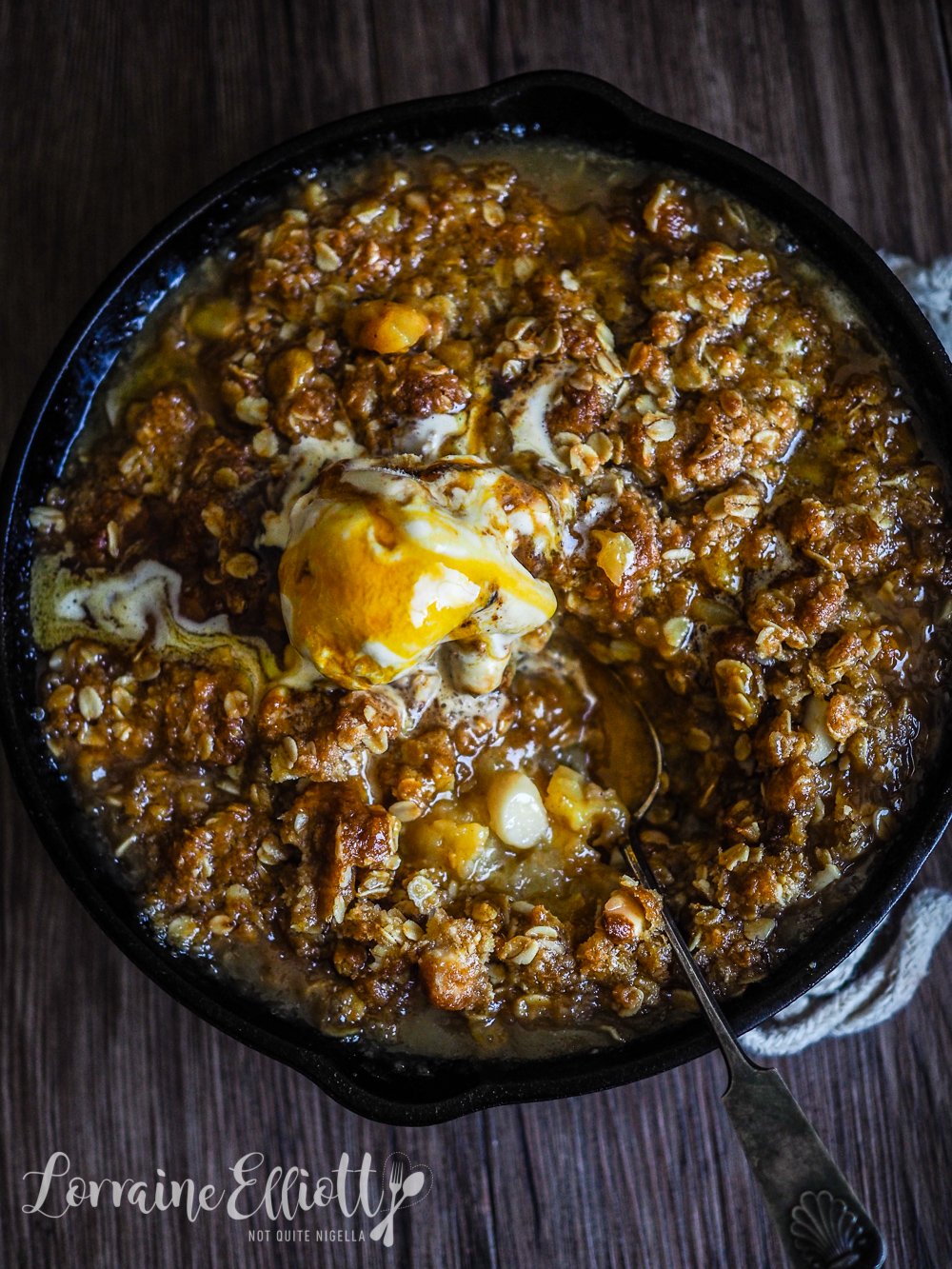 Ivy answered that she loves grapes because she likes how they burst in your mouth, are portable and aren’t messy to eat. Mr NQN loves lychees because they're very sweet and juicy. And Ryan's favourite fruit is the humble apple.

Initially we were surprised that he chose the apple out of every fruit in the world but then it made sense-he is all American like apple pie. "Apples are wholesome," he answered with a smirk (unlike figs I guess!). "I like the crunch and they’re filling. They're satisfying like you’ve got something in your belly but not sitting in there like a rock."

So tell me Dear Reader, what is your favourite fruit and do you think your fruit choice says a lot about your personality? And do you bake ANZAC biscuits on ANZAC Day? 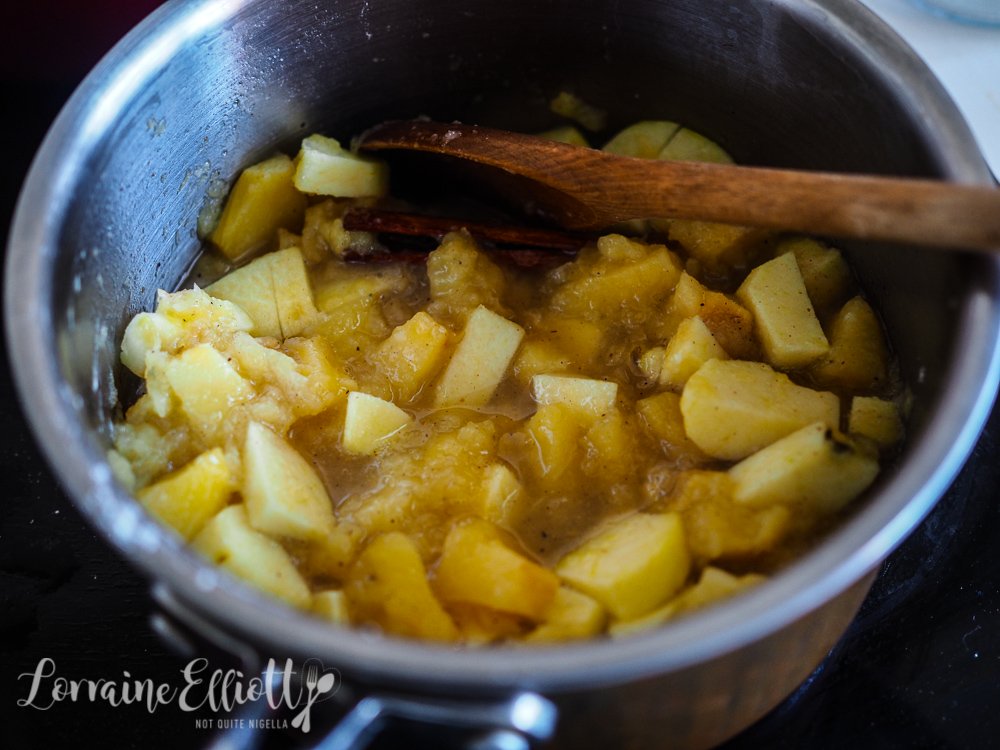 Step 1 - Preheat oven to 180C/350F. Place the quinces in a saucepan with the water, sugar, lemon juice, cinnamon, cloves, nutmeg and vanilla and bring to a simmer and cook for 5-6 minutes or until the quinces are cooked and soft. Add the flour to thicken the liquid and then add the apple raw (the apple doesn't need to cook like the quinces). Place in a deep cast iron skillet and remove the cinnamon stick. 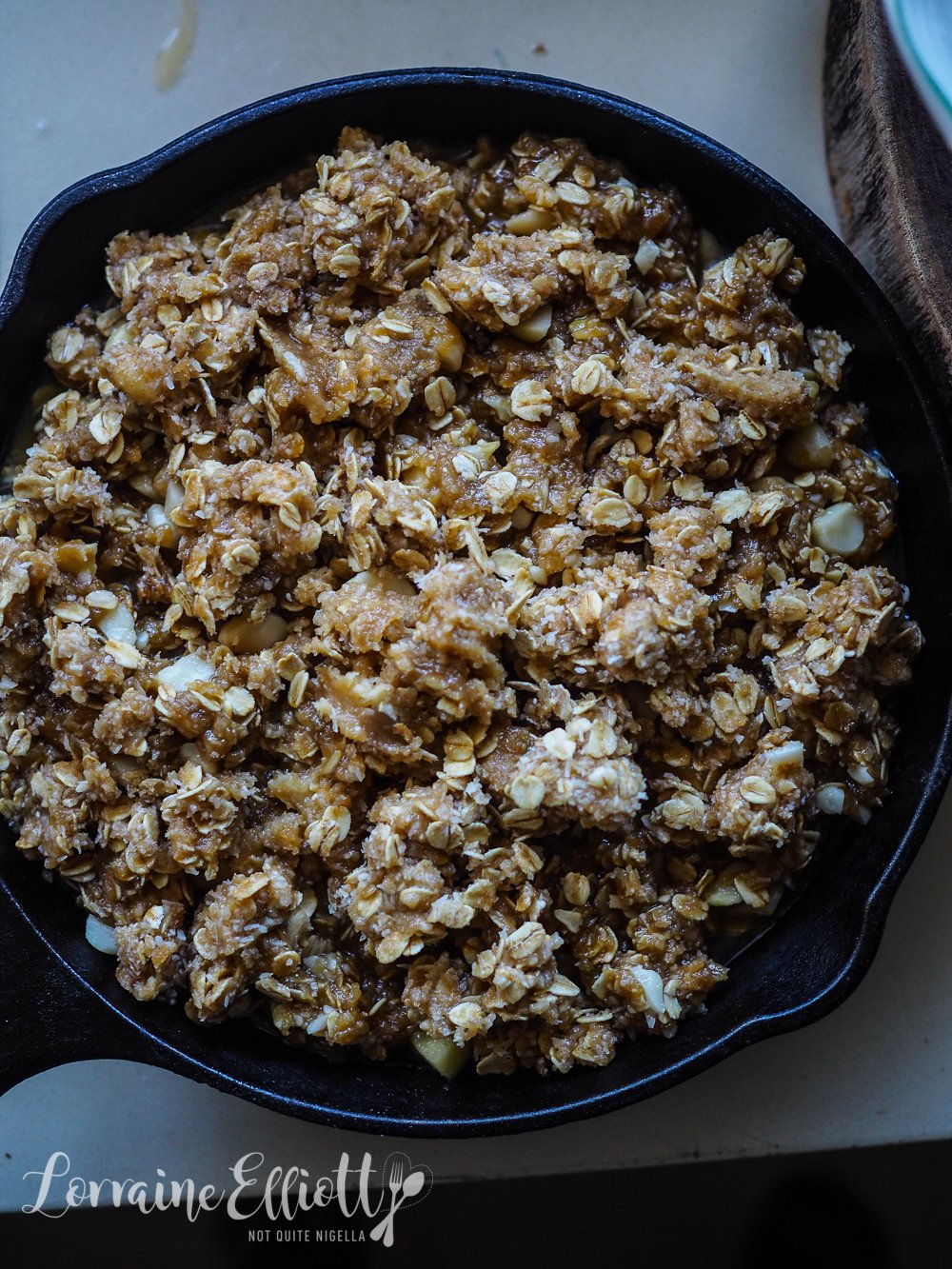 Step 2 - In a bowl mix the oats, sugar, flour, coconut, macadamias, butter, golden syrup and salt and then dollop over the fruit mixture. Bake for 25 minutes. Serve with a scoop of ice cream and a drizzle of golden syrup. 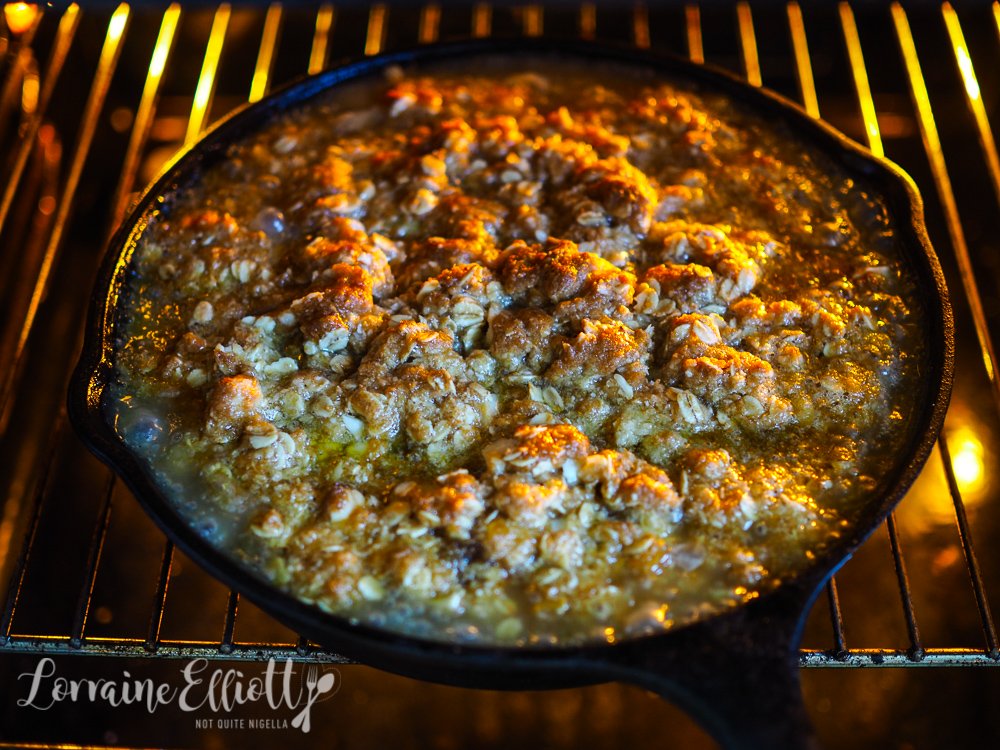 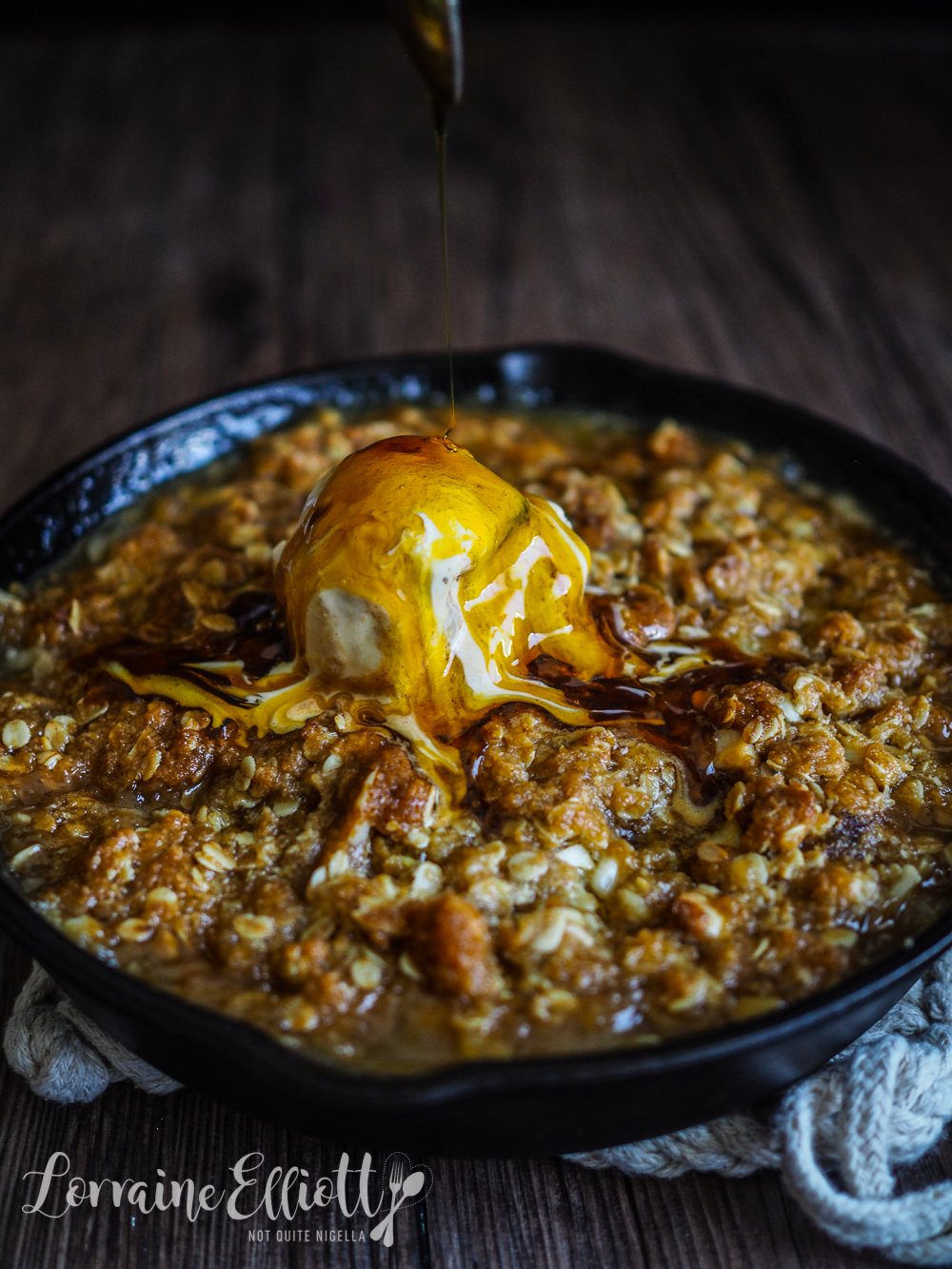