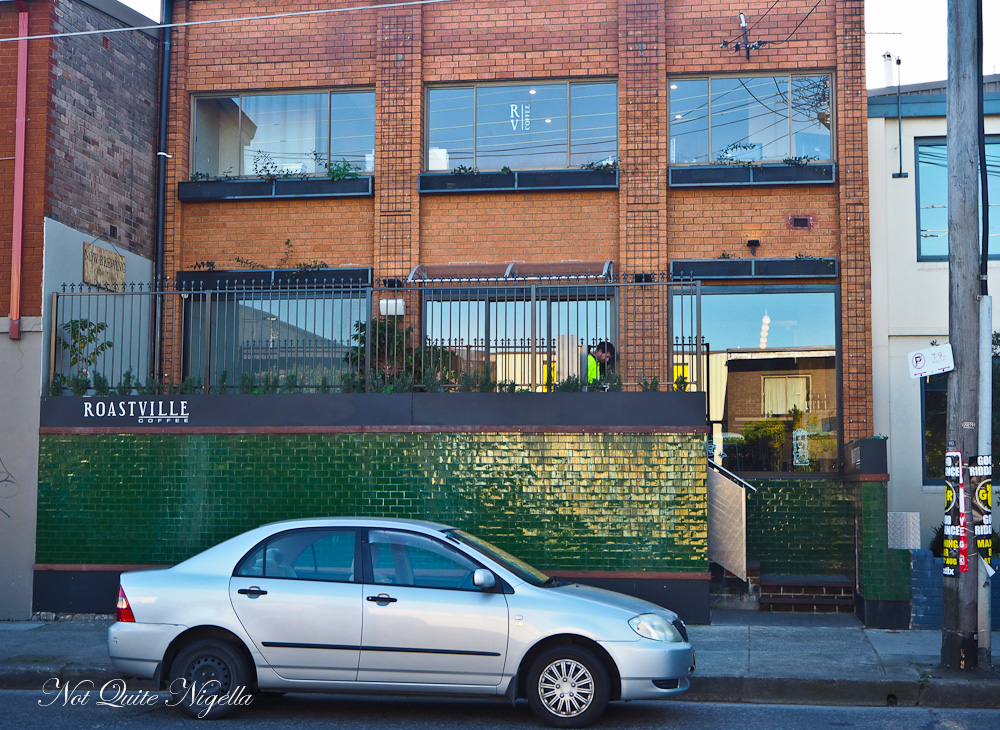 A new cafe in Marrickville, Roastville is a tribute to all things on trend. Coffee is a given, particularly considering the name but there's also delicious paleo shakes as well as kim chi waffles with fried chicken or soft 12 hour beef cheeks. Save room for a smidge of dessert, their pastry chef makes a mean and lean lemon and blueberry tart as well as healthy sweets. 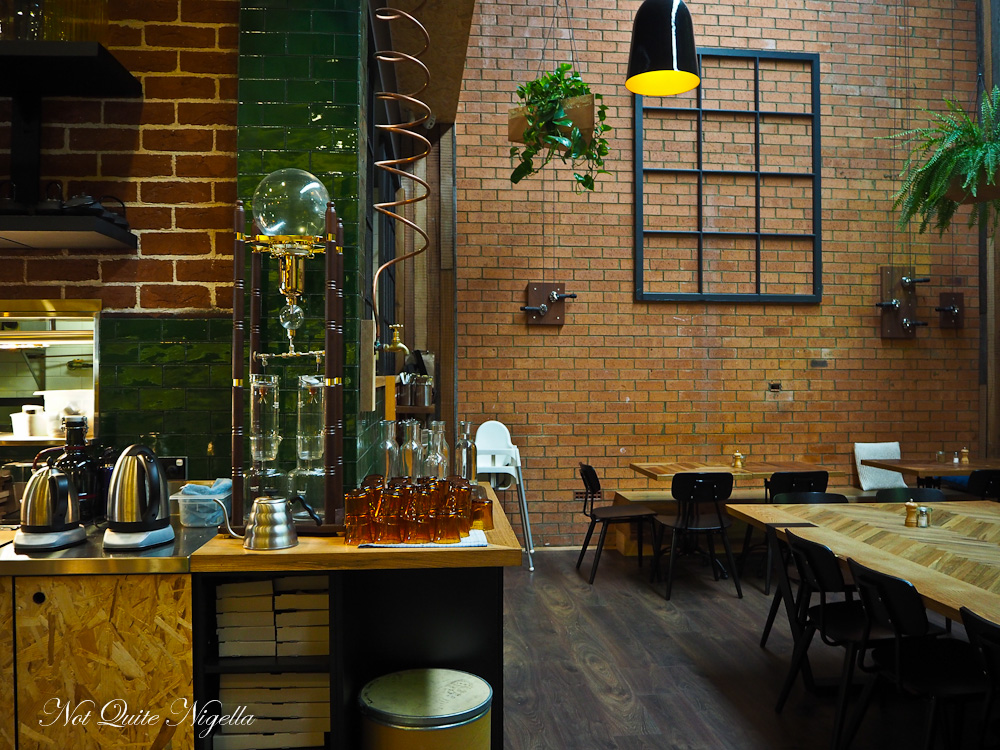 Most of the time I try really hard to look presentable. It often falls short but I figure that with enough red lipstick to create the illusion of glamour I can get away with a bit. But it was on one particularly busy day before I left for Canada that I found myself then frying donuts, doing a workout and photographing the donuts before I realised that I was running late to pick up Jaqi for a late lunch. I quickly slapped on some makeup and then rushed out. I looked in horror at the mirror downstairs in the common area. 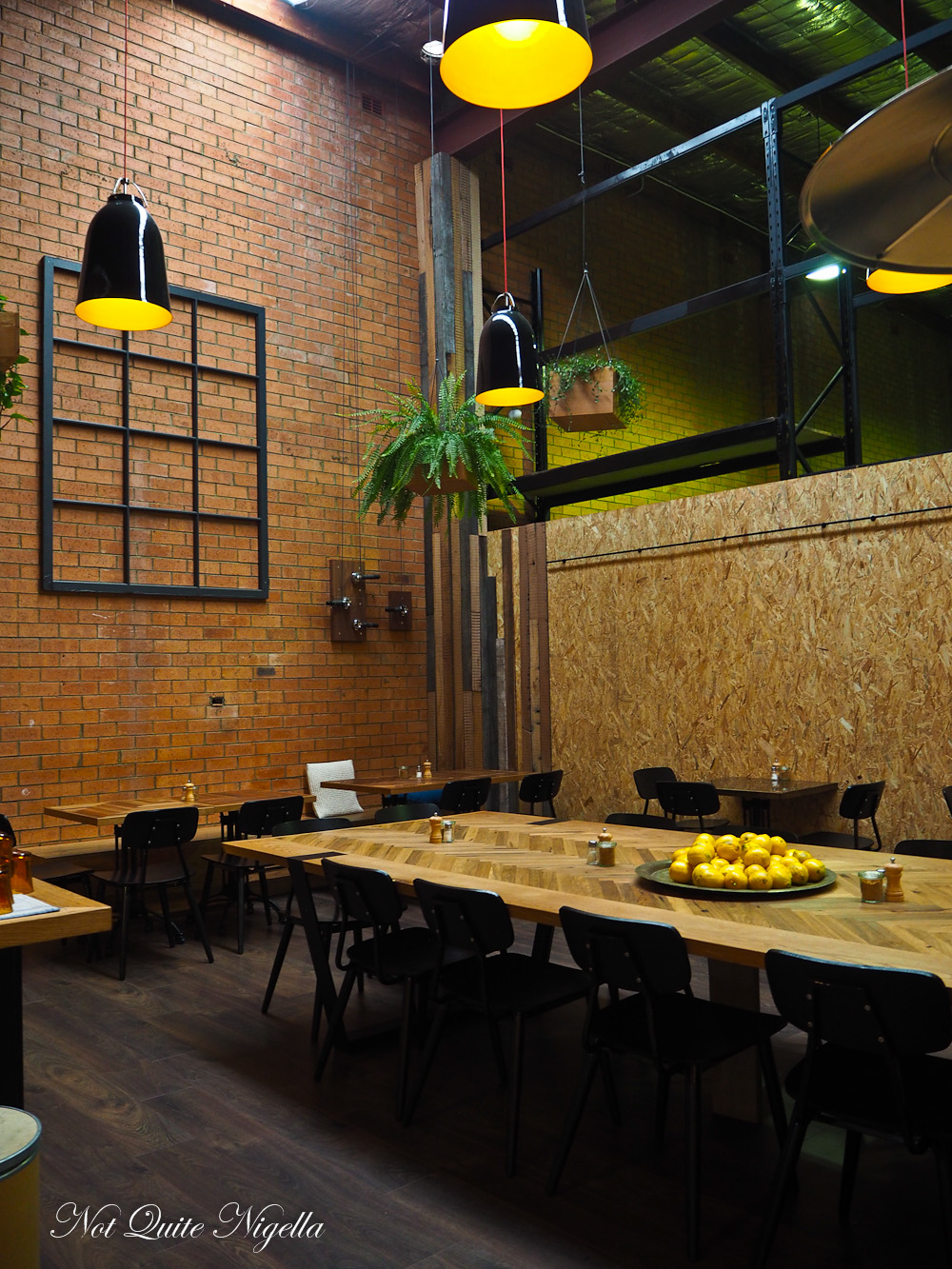 I was wearing a mullet of an outfit.

You see I had a faceful of makeup and my workout gear. Party in the top and workout in the bottom. It was a look that was not lost on Jaqi who politely wondered about my appearance. Gulp... 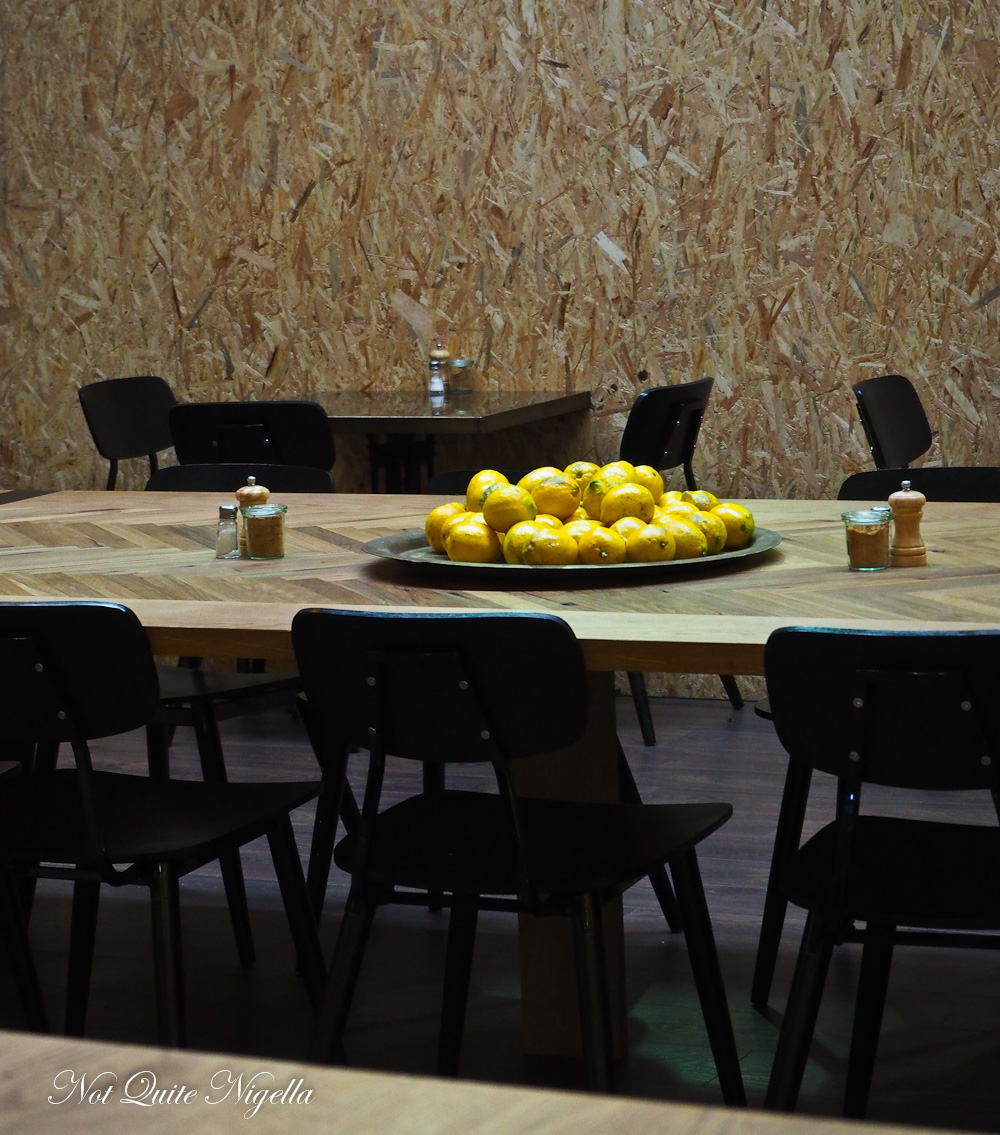 I would soon distract her with food (the only real way I know how to distract people). We were headed to Marrickville to try a new cafe called Roastville. Originally I thought that it was a coffee roaster but as I'm more a tea person I figured I'd save that for Mr NQN sometime. But then my friend JY from @jyjewels put up a picture on Instagram of the breakfast that she had at Roastville and I was totally smitten by the dirty chicken benedict. She confirmed that the food was great and added that they have their own pastry chef making raw and regular creations. I had to try that dirty chicken benedict for myself. 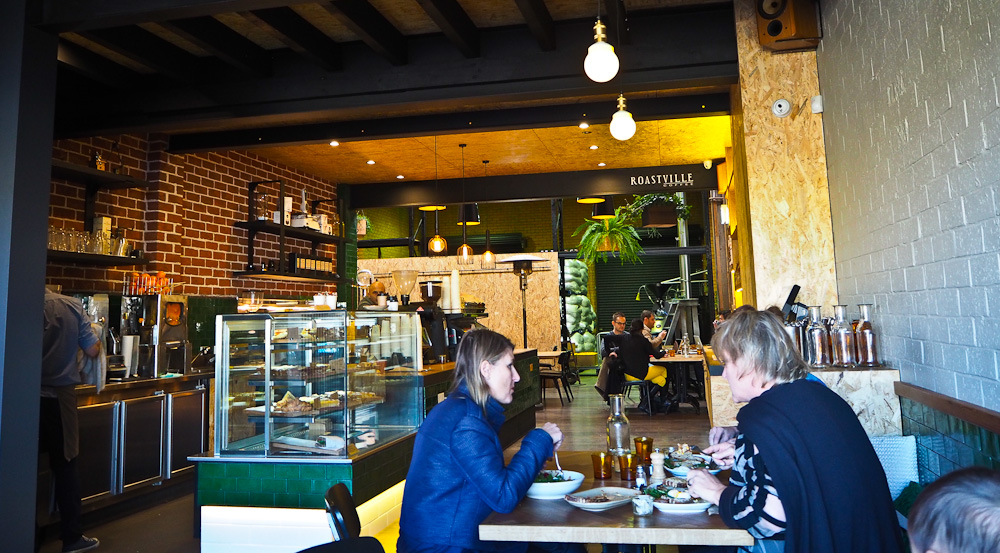 Roastville is located on Victoria Street and is the 11th food venture for owner George Choutis who has run cafes and fine dining establishments. They believe in an all day breakfast (hooray!) and they also don't believe in making fun of or laughing at people who over order. Because that's just what Jaqi and I did because we wanted to try everything. We ordered five dishes between the two of us knowing that we will take a few home for dinner that evening as it's such a late lunch. 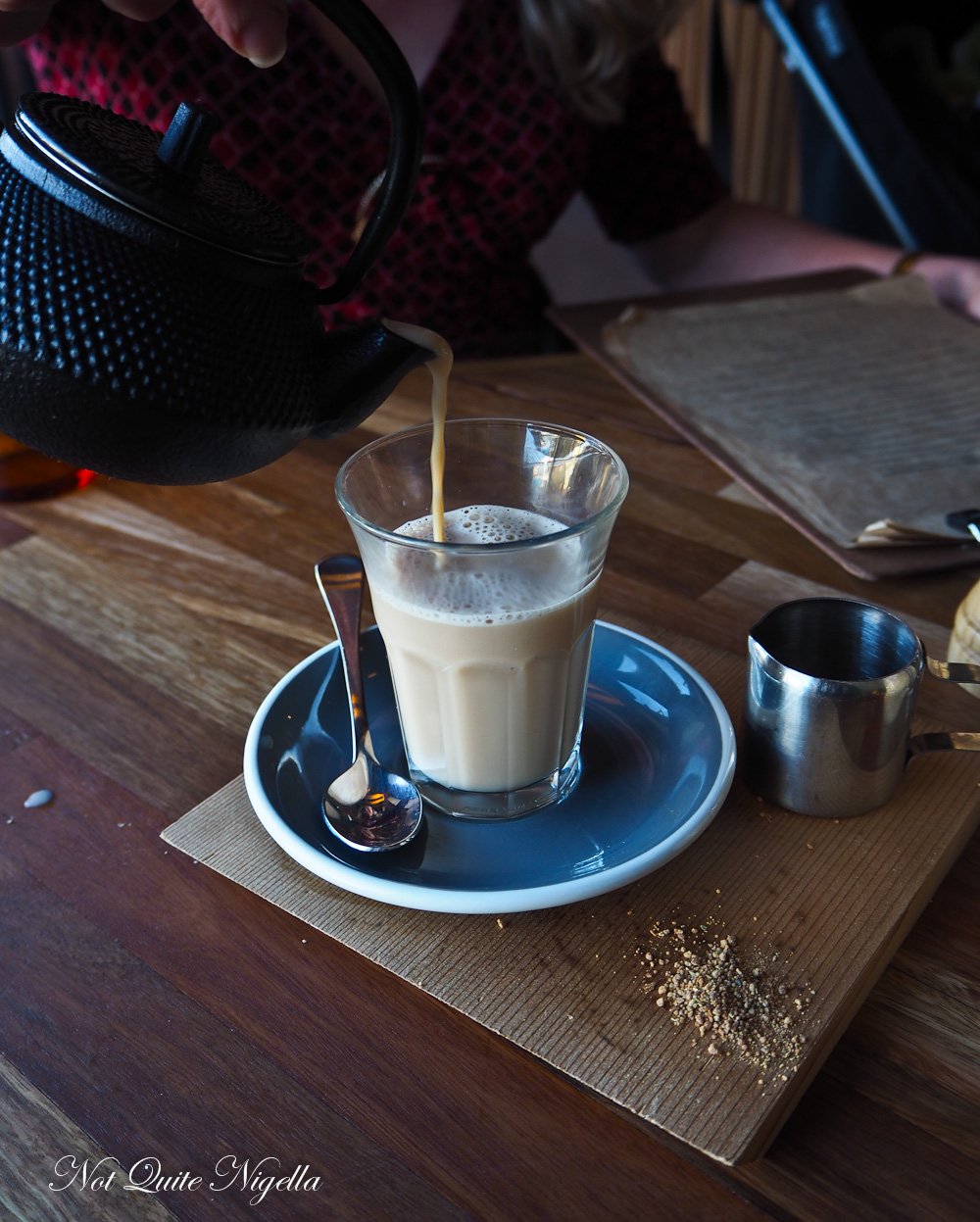 As the name suggests the cafe is about coffee and they roast beans three times a week on the premises. And even outside there is a coffee tree among the herbs and other plants. Our drinks arrive and I start with something quite healthy - the menu straddles two popular food groups on Instagram, purist paleo and American excess. Which is kind of like the way I eat :P 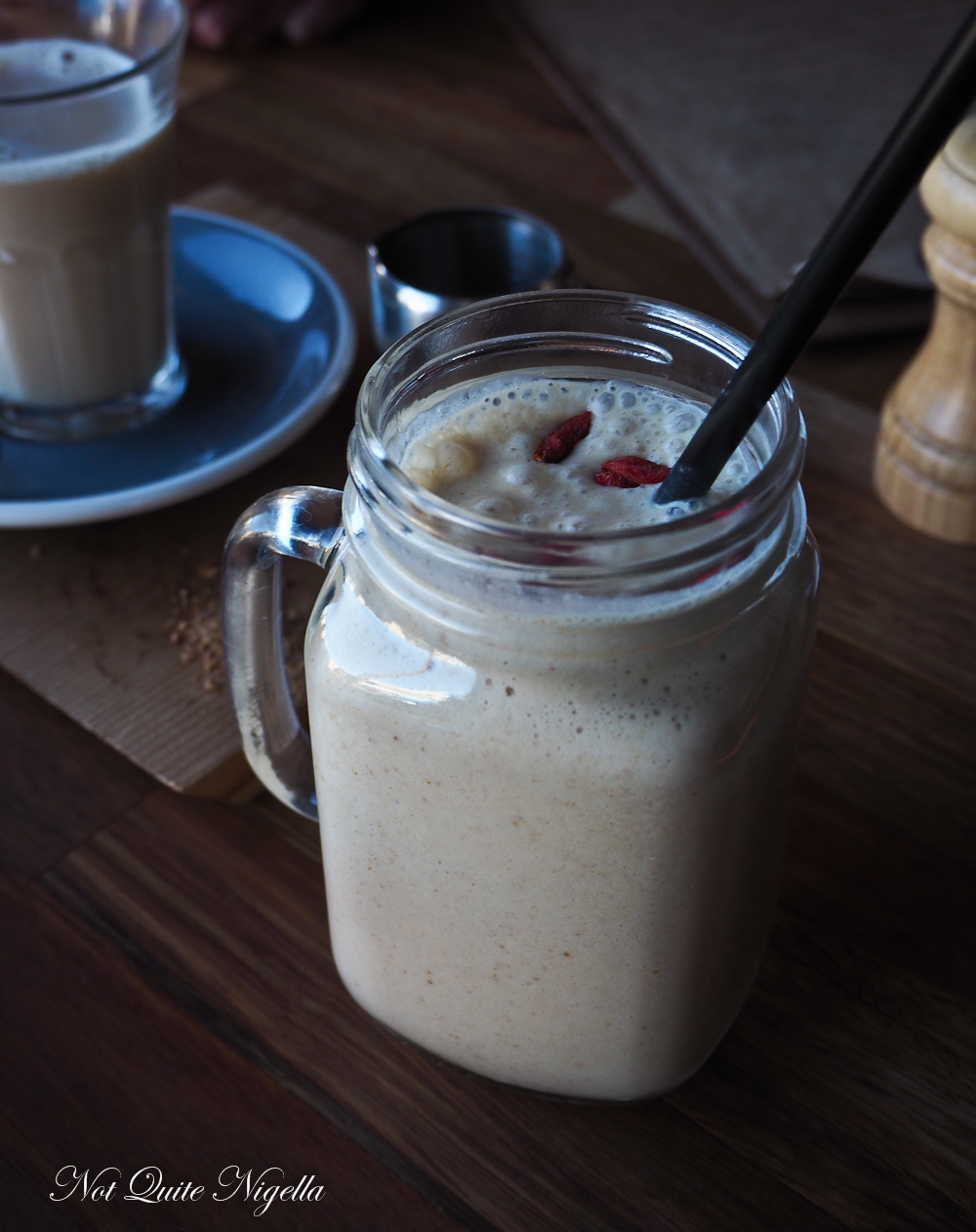 I almost forgot that this was a healthy drink made with medjool dates, banana, peanut butter, almond milk and goji berries because it tastes just as good and indulgent as a full fat peanut butter shake. My brain is confused but I keep drinking. 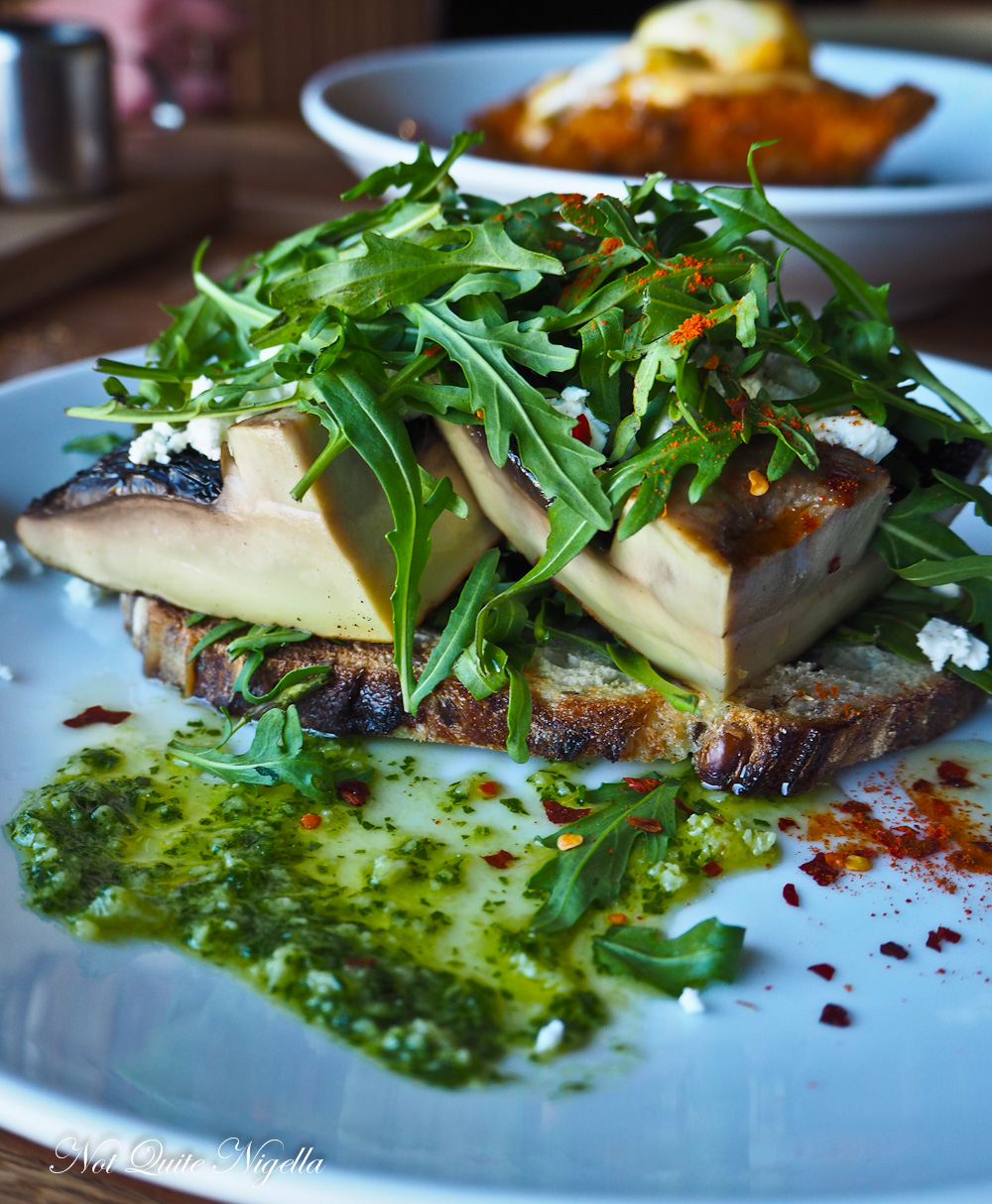 The mushroom bruschetta is enormous with a thick field mushroom on top of a thin slice of grain toast. It's blanketed with rocket, some crumbled feta, salsa verde and paprika that gives it a resounding kick at the end. The mushrooms are well cooked and juicy all the way through and the dish is sizeable and great value. Like a lot of the dishes there is hot paprika served on it so if you don't want the heat you would have to ask for it without the paprika. 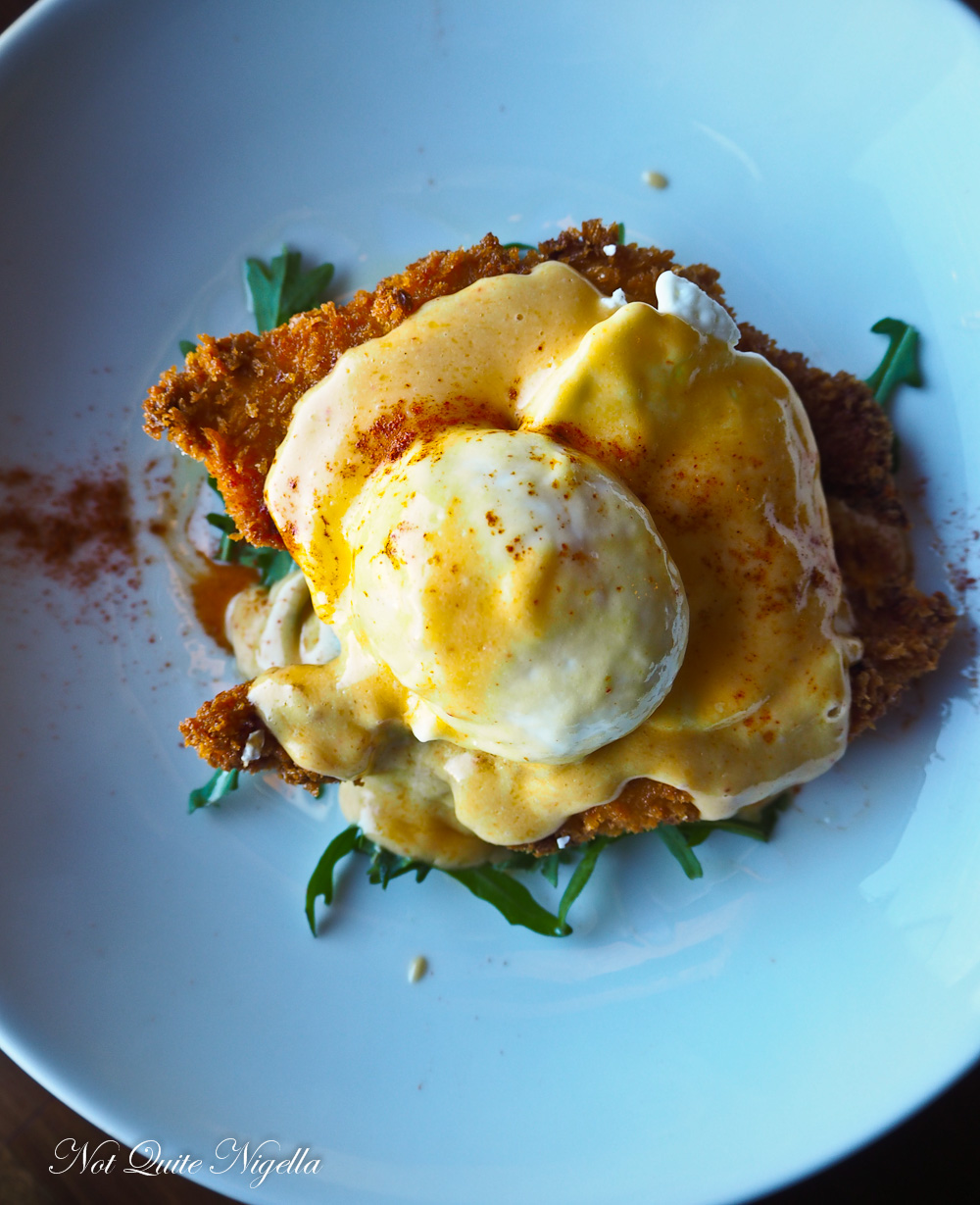 And then it comes out, a dirty bird benedict with a crumbed breast fillet on top of a sage biscuit with two poached free range eggs, harissa hollandaise and rocket. My half has a bit less hollandaise which is needed because much of the seasoning in in this but it's one of those crazy gooey, crunchy plates. It does need a tad more salt on the chicken though. 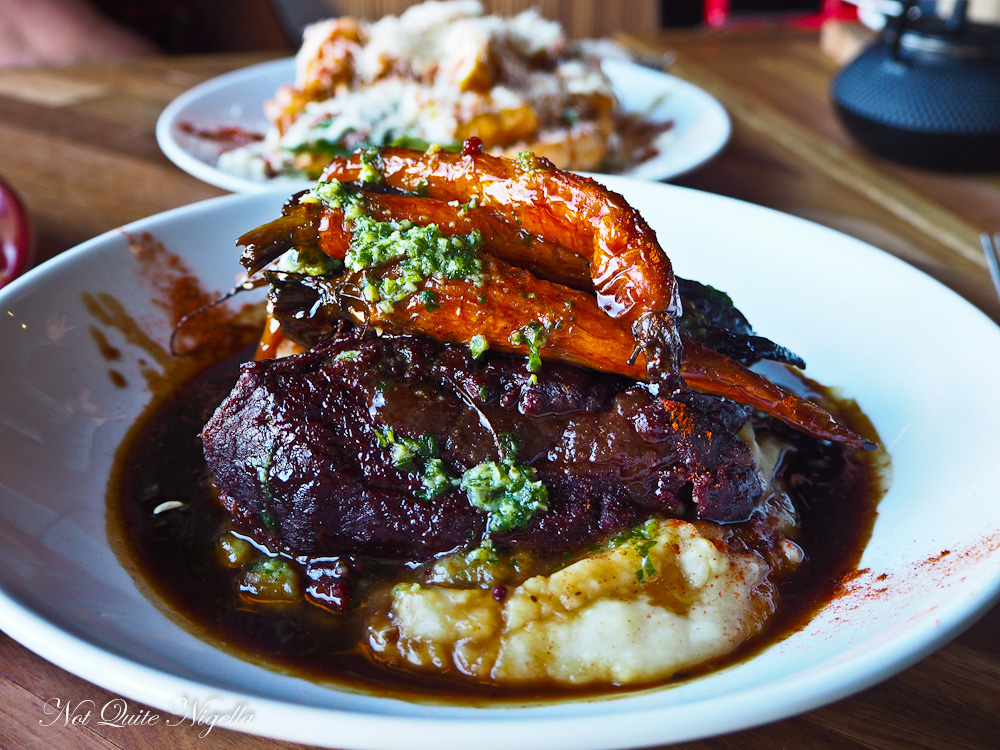 I wasn't sure how large the beef cheeks would be given the price but it is a sizeable portion of slow braised beef cheeks that fall apart perfectly. It sits on a bed of celeriac puree and is accompanied by caramelised roasted baby carrots and a field mushroom. This too is spicy, a bit too spicy for Jaqi who has an allergy to chilli. 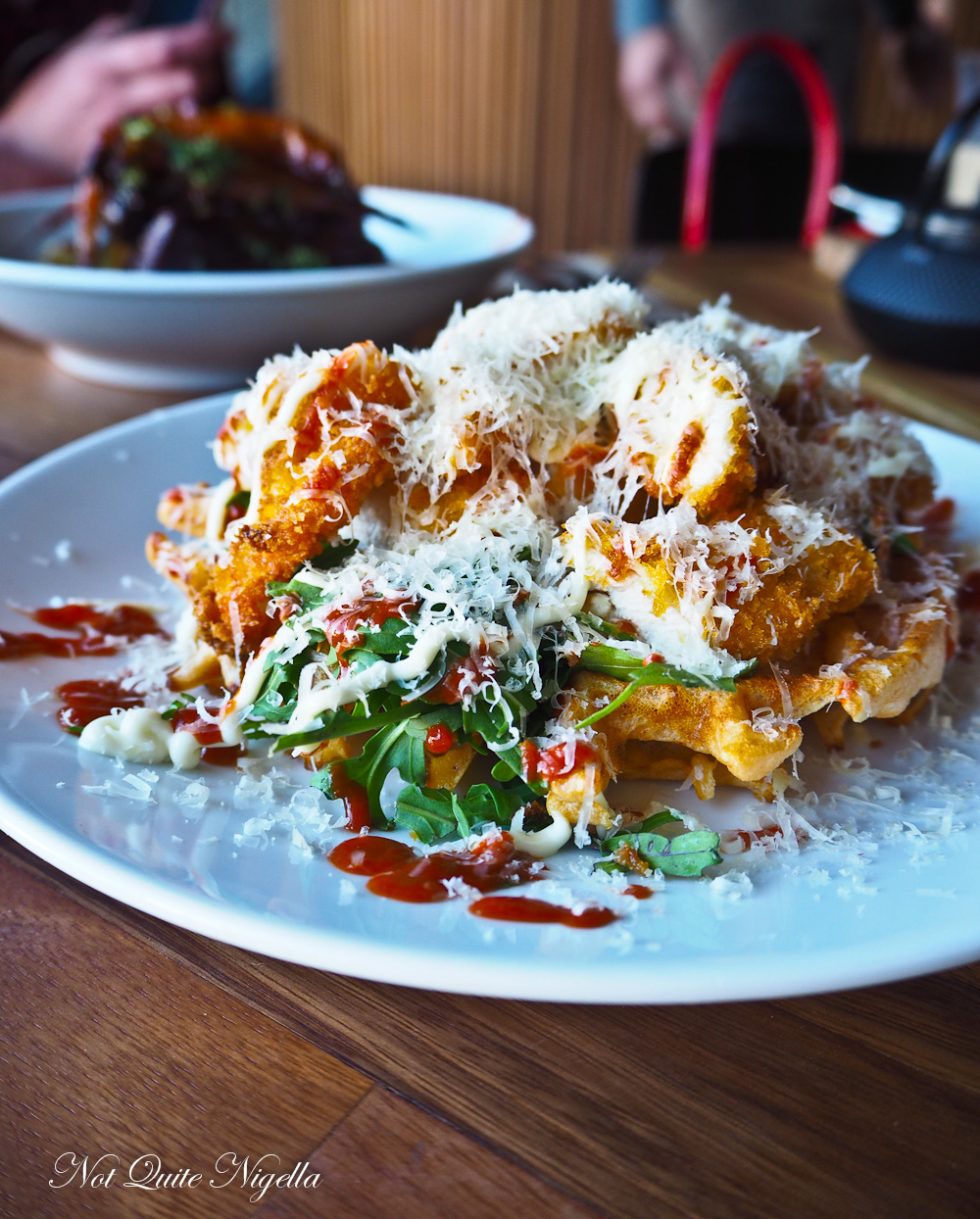 My pick is the fried chicken and kim chi waffles and it comes out looking like an absolute treat. There is a large, spongey waffle on the bottom layer and this is topped with chopped up pieces of crumbed fried chicken and a drizzle of kewpie mayonnaise, sriracha and pecorino cheese on top. I love the combo of sauces and the soft waffle with the crunchy chicken. 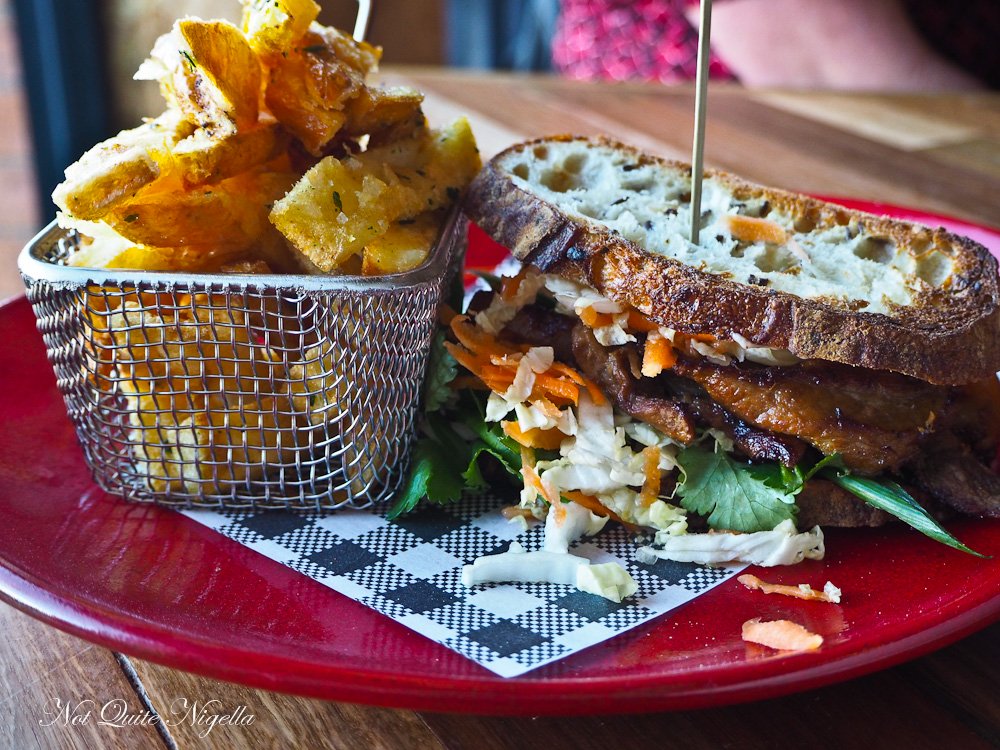 We weren't sure whether to get this or not because they had run out of the soft milk bun that normally comes with this but I love bulgogi so I wanted to try this. Instead they have toasted grain bread that doesn't quite suit it as well. The pork bulgogi comes as marinated sliced up pork belly slices with a coriander coleslaw and a wasabi mayonnaise. I think this would have been great on a milk bun for the softness. They come with a basket of hand cut fries. 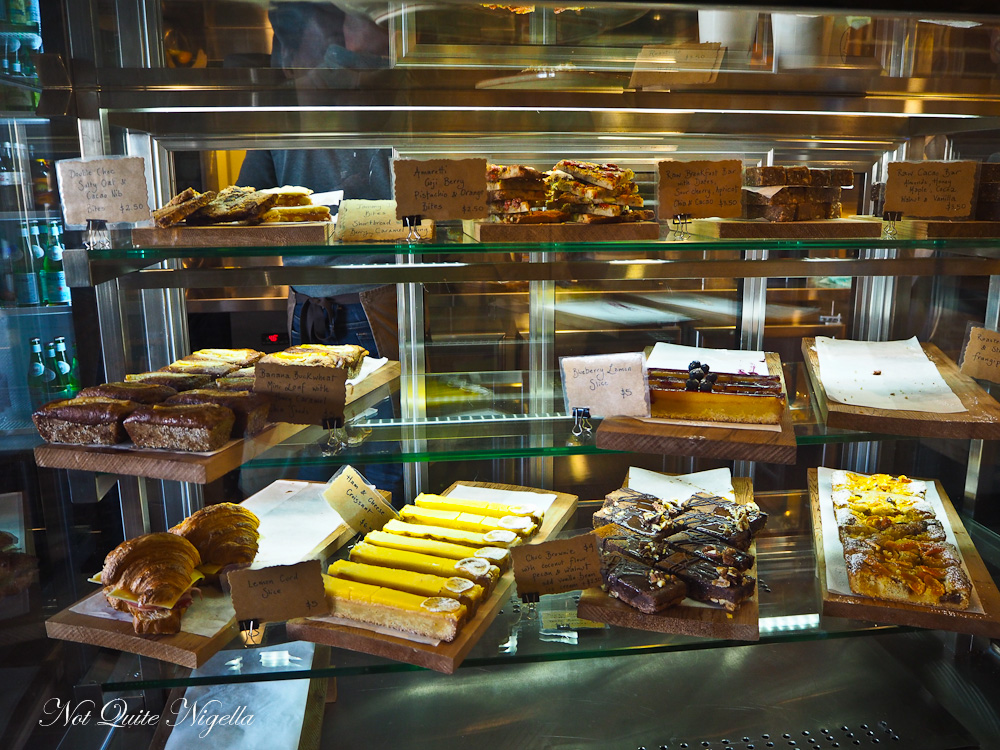 We had to save room for dessert (and they packed up most of this for us once we had tried it) so we make our way to the cake display. 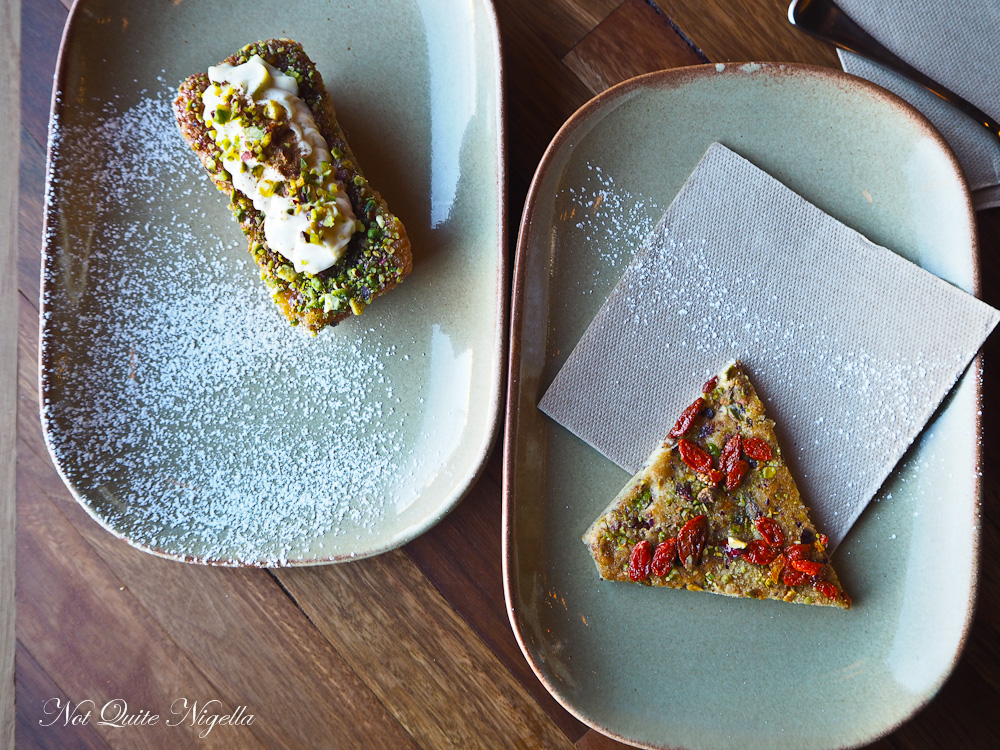 There are some raw items and one of the "bites" catches our eye. They're actually more like bark but instead of chocolate it's made out of biscuit. It has a wholesome flavour which is sweet and reminiscent of a nut and honey Middle Eastern cake and it is topped with goji berries with pistachio and orange. The flourless orange cake is always a classic but here it is served as a rectangle shape and topped with vanilla labne and chopped pistachios. 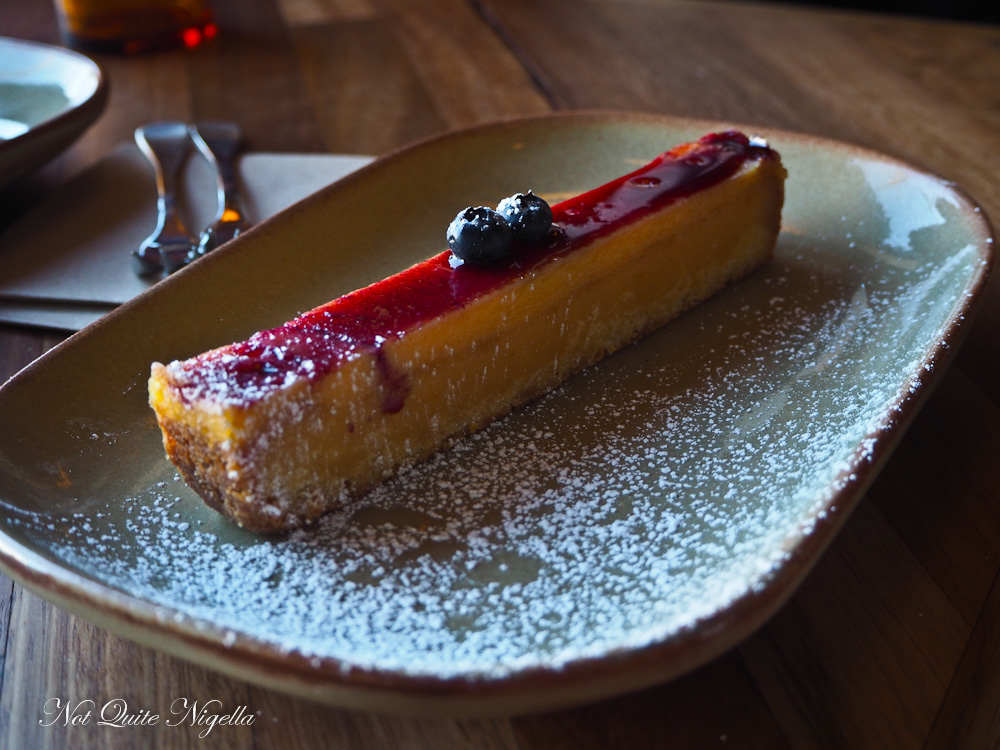 The last sweet is something that we saw another table eating and they confirmed that it was very good indeed. JY had eaten the lemon tart but we liked the look of the blueberry and lemon tart which has a perfectly sweet and tart lemon layer with a layer of blueberry glaze on top.

We leave with bags of food but we figure that it's a win as we now have dinner sorted!

So tell me Dear Reader, do you ever order more so that you can serve the food later that day? And have you ever worn a "mullet" outfit? And what do you think of the dirty bird benedict? Would you order it? 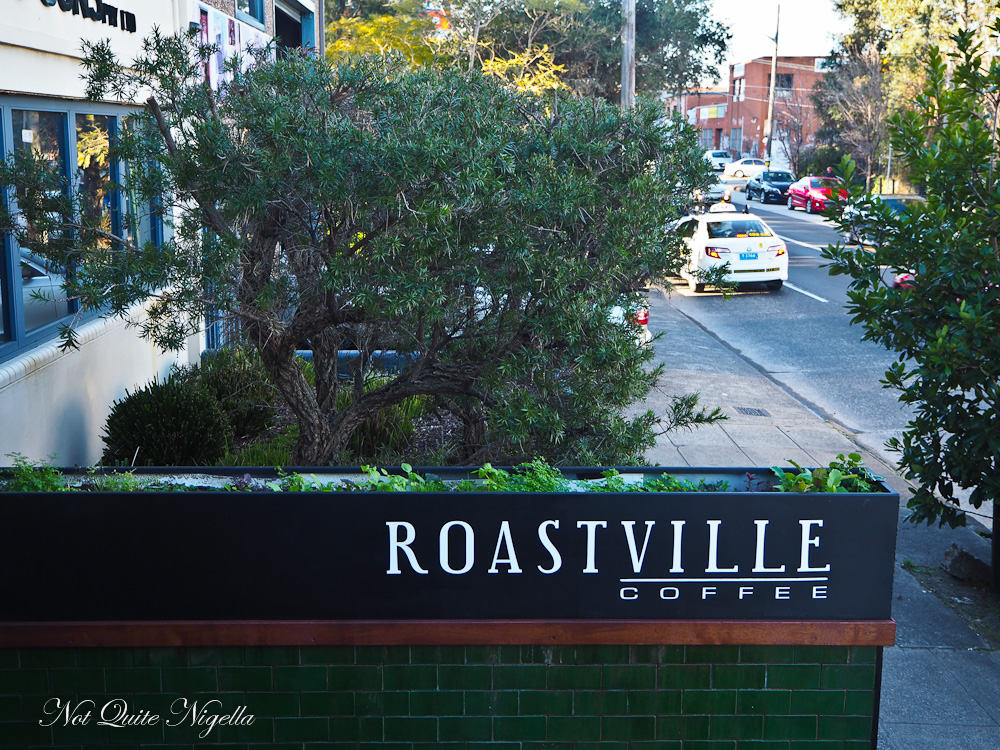