An Authentic Pad Thai & The Pursuit of a Recipe! 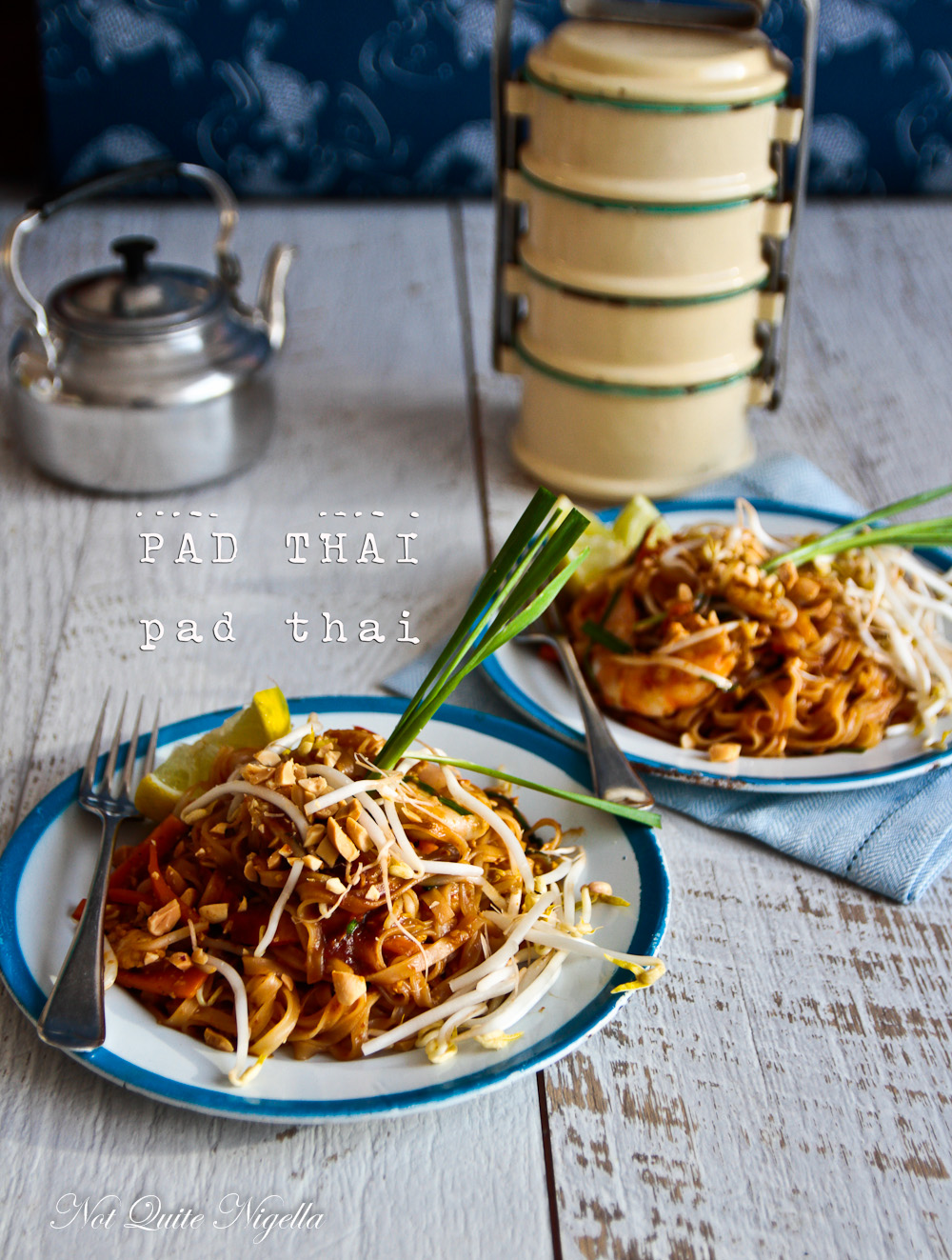 Pad Thai is one of the most well known Thai noodle dishes but up until recently I never really enjoyed it. Until I tried a version in Thailand that had a bunch of Pad Thai skeptics swooning. And that was just the beginning of the struggle to try and unearth the recipe...

I think I may have mentioned this before but when Mr NQN was asked to give five words to describe me he used two words that slightly annoyed me: driven and determined. I was only slightly annoyed because I know that they are true but I was hoping that he'd use other words before these.

But get me started on something and I may never let go until I see it through. It all started with a cooking class in Thailand. Hotels tend to hold cooking classes because guests often like to learn how to cook the dishes that they eat in the country when they get home. One day we all arrived to the restaurant at the Sala Phuket where there was about 30 bowls of sauces and ingredients laid out. 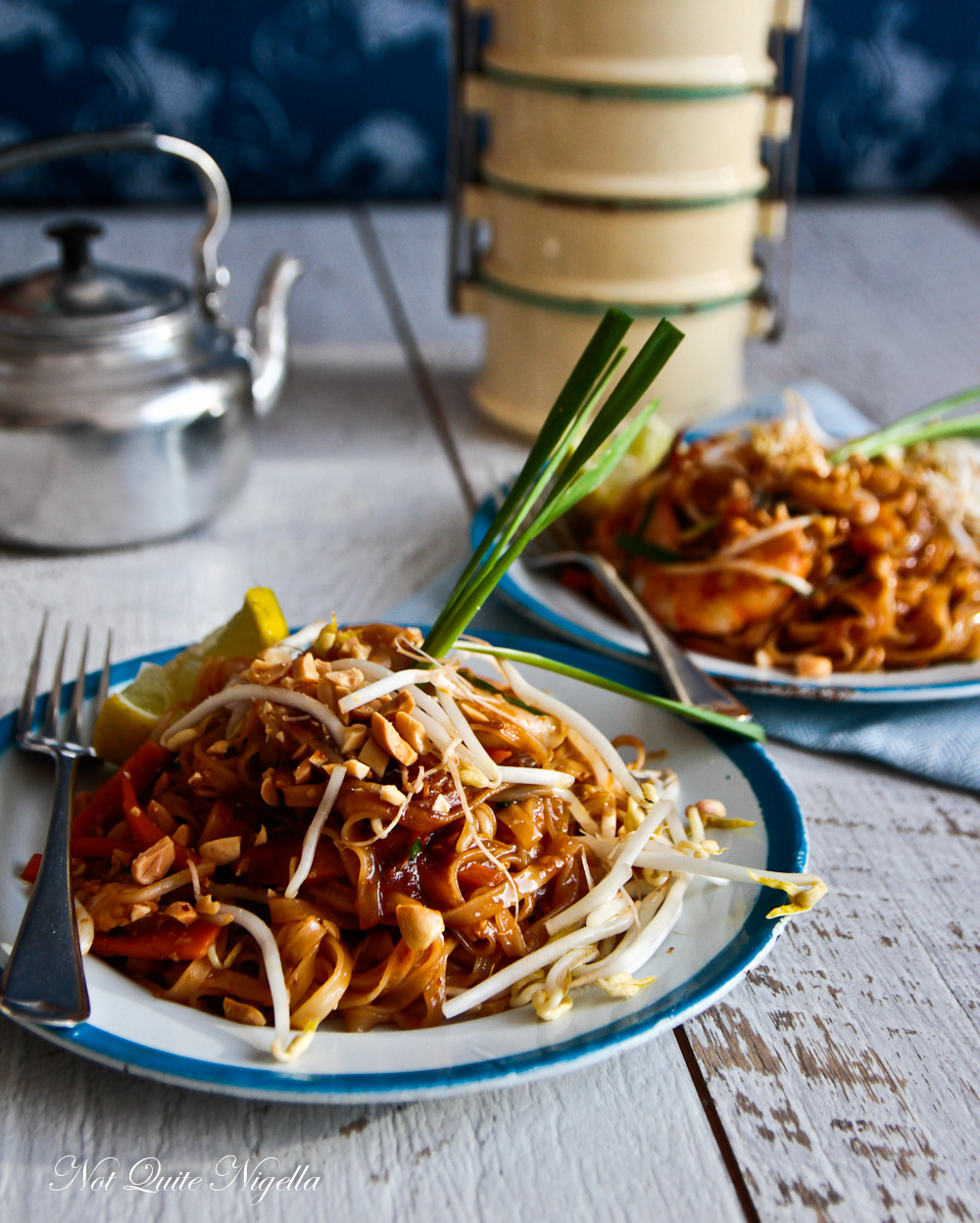 There was a Thai chef and an Italian chef and the Thai chef really knew his way around the food. Unfortunately everything was sort of pre made and mixed for us and each of our group of five would get to cook one dish each while the others watched. Everyone chose different items and I chose Pad Thai. I have to admit that Pad Thai is something that I can never get right and even when I order it at a restaurant I don't really like it that much. It tends to be a huge clump of dry noodles with peanuts on top.

When it came to making the Pad Thai he asked me to add two sauces, a stir fry sauce and a reddy orange sauce which he called a Pad Thai sauce. When it was finished we tasted it and it was utterly delicious, easily the best Pad Thai that we all had eaten. I was so smitten with it that I put it on Instagram and people asked for the recipe. "Don't worry there are recipes!" they told us and indeed on our chairs was a folder of recipes from the day.

As soon as I got back to the room I tore open the envelope and I scoured the recipe. My face fell as there was no Pad Thai sauce. When I asked them they answered gaily that the recipe that they gave was the abridged one that people tend to use because it is simpler. There was just the one sauce, the stir fry sauce but the magical Pad Thai sauce was missing. 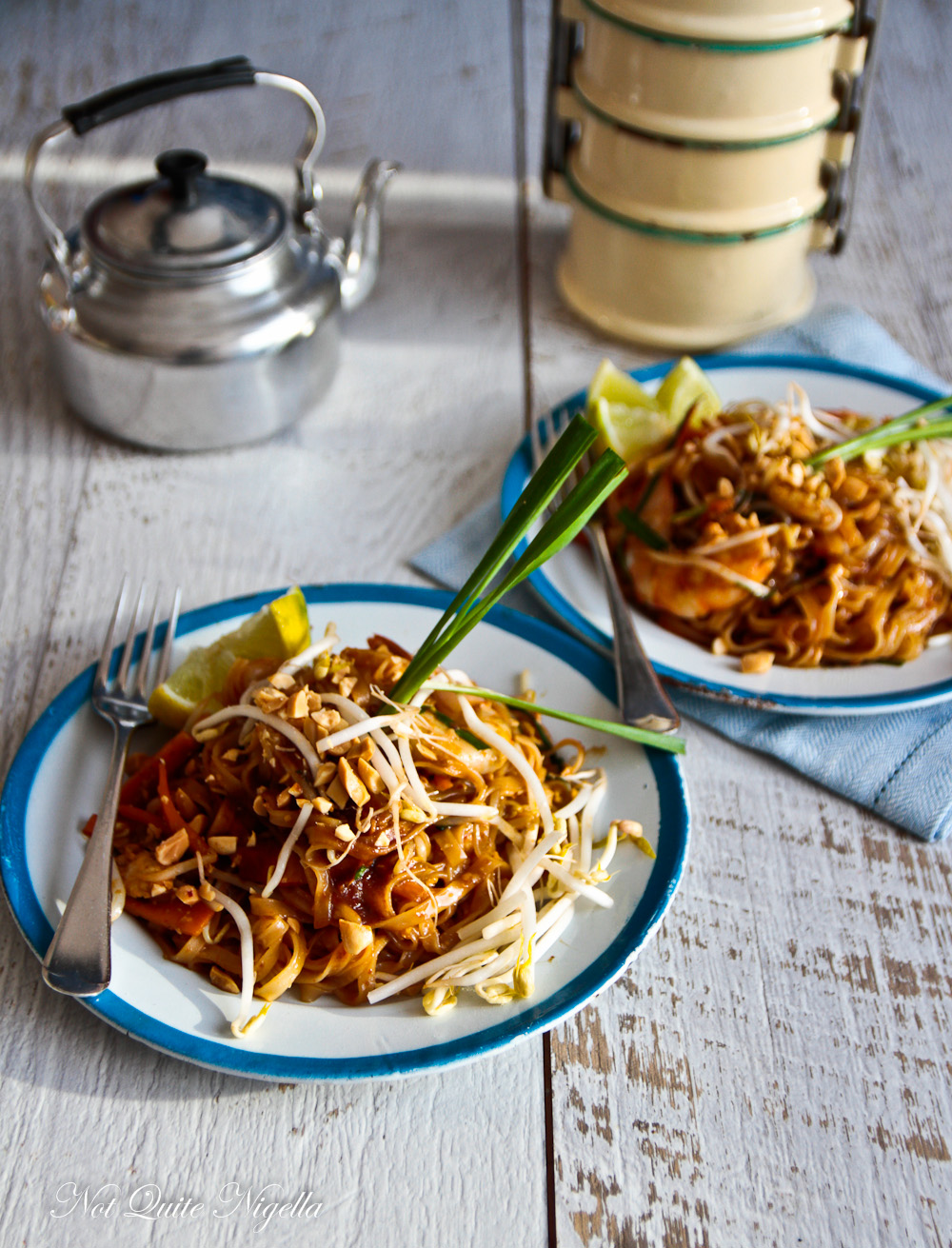 And up came my horns. My stubborn Taurean bull horns. I had to have that recipe. What followed weeks later was a range of emails, the very same recipe being sent and then I met the lovely Jen Evans the 2012 winner of My Kitchen Rules who lives in Bangkok. She has her own food line called Jen's Kitchen and she offered to send me her Pad Thai recipe with the mysterious Pad Thai sauce. And then the updated recipe arrived from the hotel and I set about one Sunday perfecting the best of both recipes.

And after some experimentation, the Pad Thai was perfect! The hallmark of an authentic Pad Thai is the mild sour flavour from the tamarind echoed by a light sweetness. Here the noodles are saucy and slippery and utterly moreish. I will admit that the Pad Thai sauce does take an hour to make but it makes loads of it and you can easily give this to friends and it lasts for about a month in the fridge (I'm sure you can freeze it too). Or you may just be tempted to have it every night after your first batch!

So tell me Dear Reader, do you ever do cooking classes when overseas? Do you replicate the items back home? And is there a dish that you could eat every night? What is your favourite Thai dish? 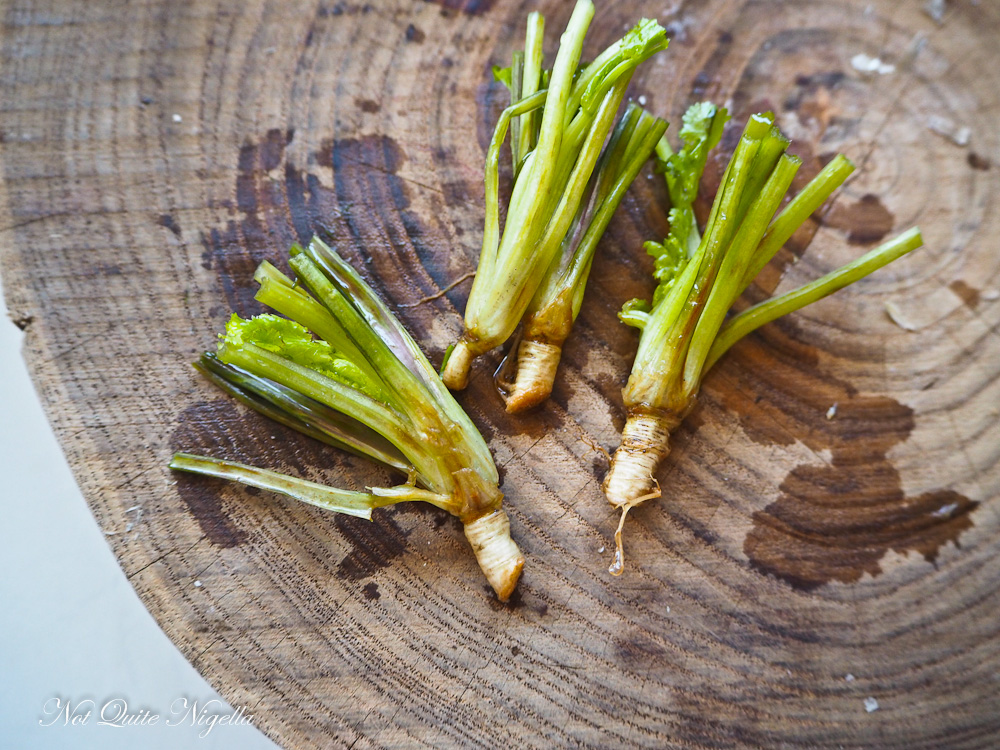 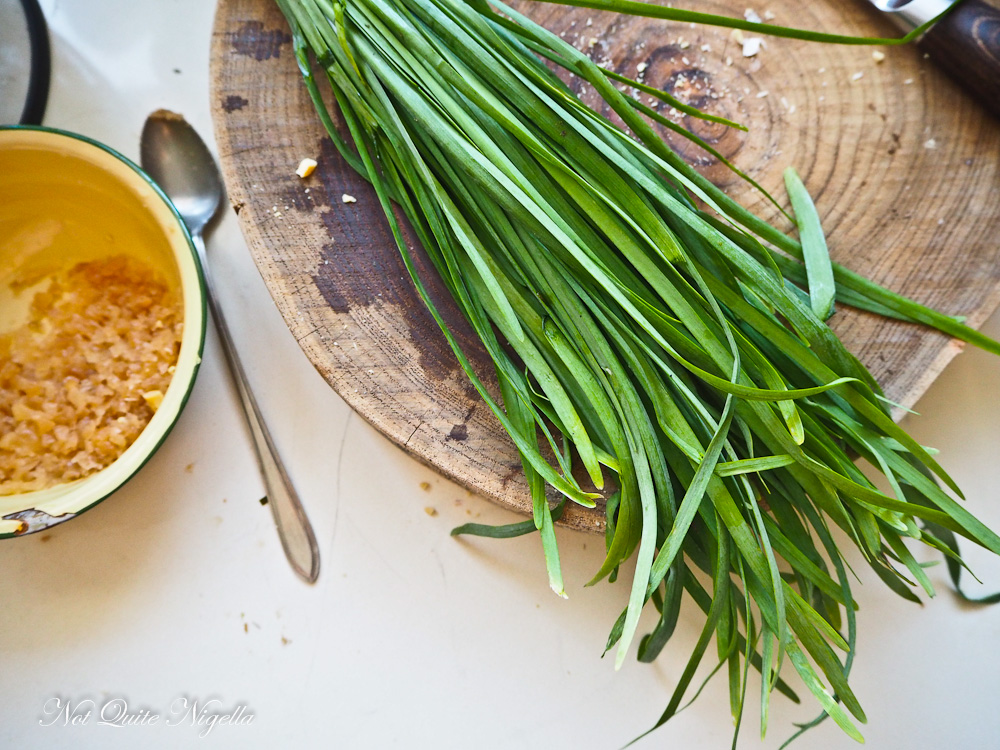 *Sweet preserved turnip, garlic chives and tamarind puree are available at Thai grocery stores. I bought them at Pontip in Campbell Street in Haymarket. 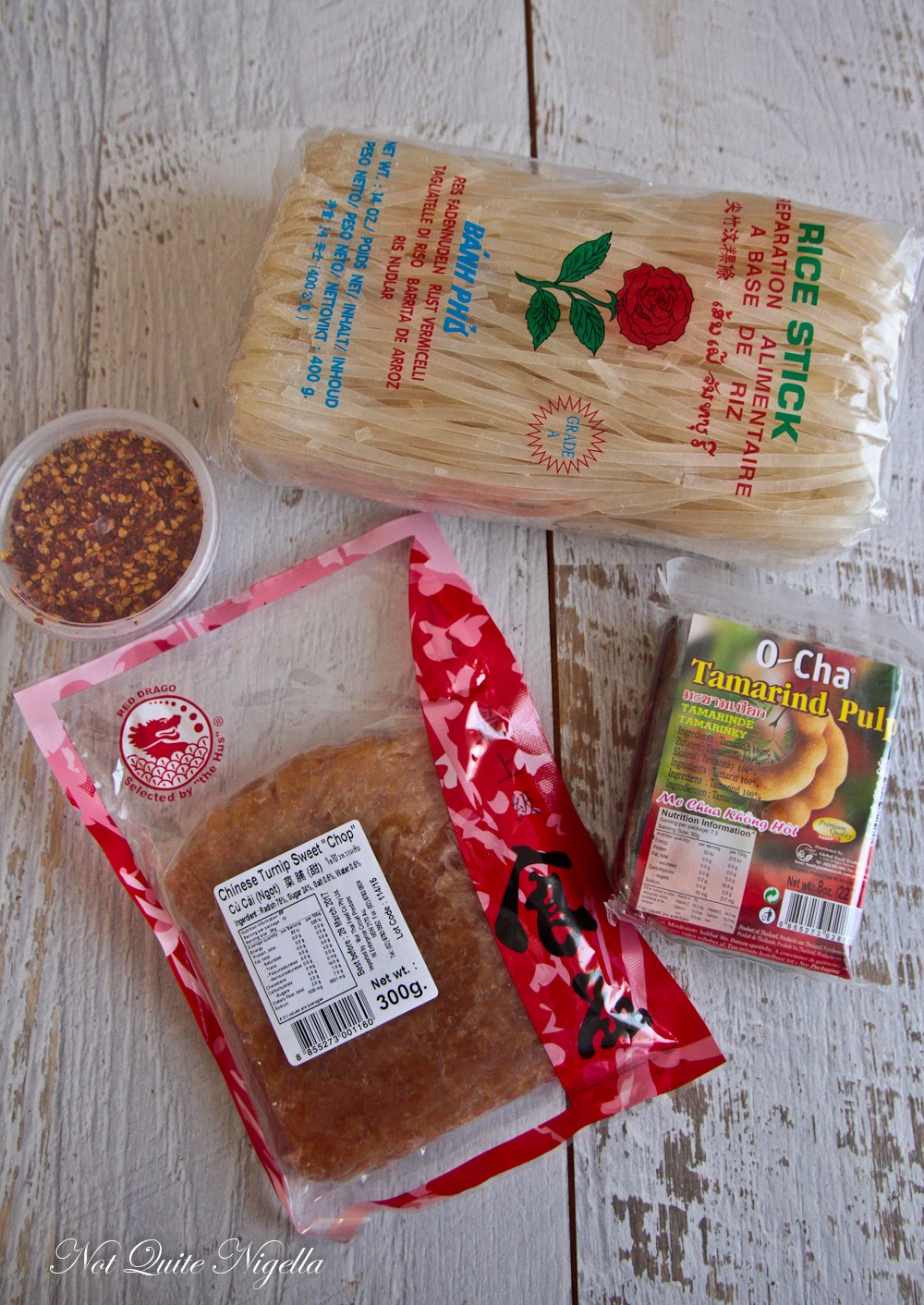 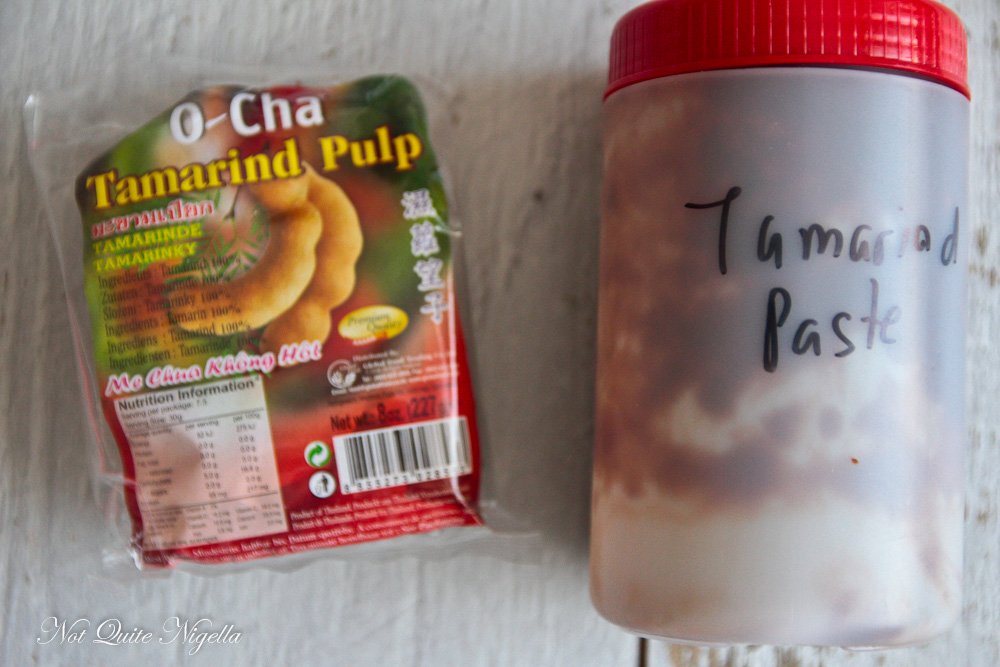 Two types of tamarind: on the left you soak half a packet in 2 cups of hot water and squeeze the pips out and strain it. On the right it is already done. The one on the right is thinner in texture but brighter red.** 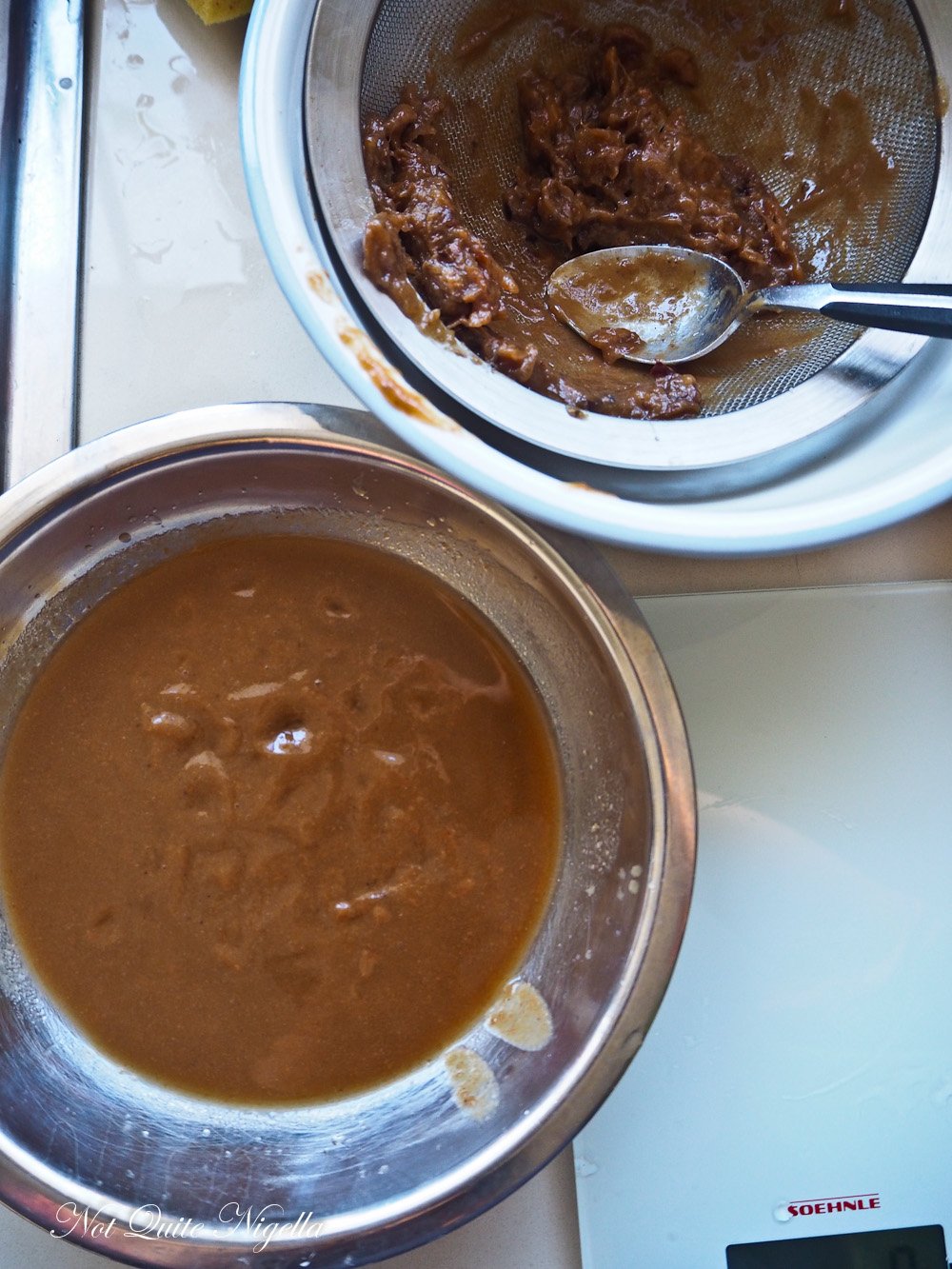 The tamarind on the left

Step 1 - Start on the Pad Thai sauce because it takes a while to cook but once you have it, it can keep for up to a month in an airtight container. It makes a lot of sauce but since it takes about an hour, I figured it was worth it and you can always give some away to friends. Place the coriander roots, garlic, shallots, chillies, salt and water in a medium sized pot and boil for 30 minutes uncovered. 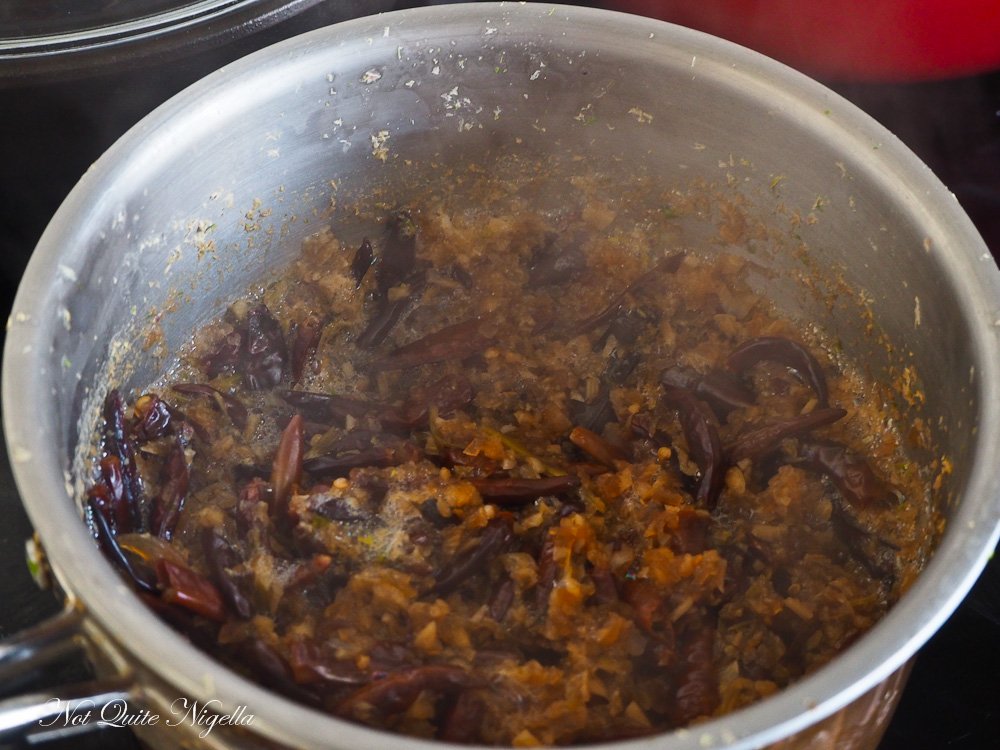 Much of the water will evaporate. Blend this mix in a food processor. Add the sugar and tamarind puree and process until smooth. Place back on low to medium heat to cook for another 30 minutes making sure that it doesn't boil rapidly - we don't want the sugar to caramelise as we want this to retain its sourness. 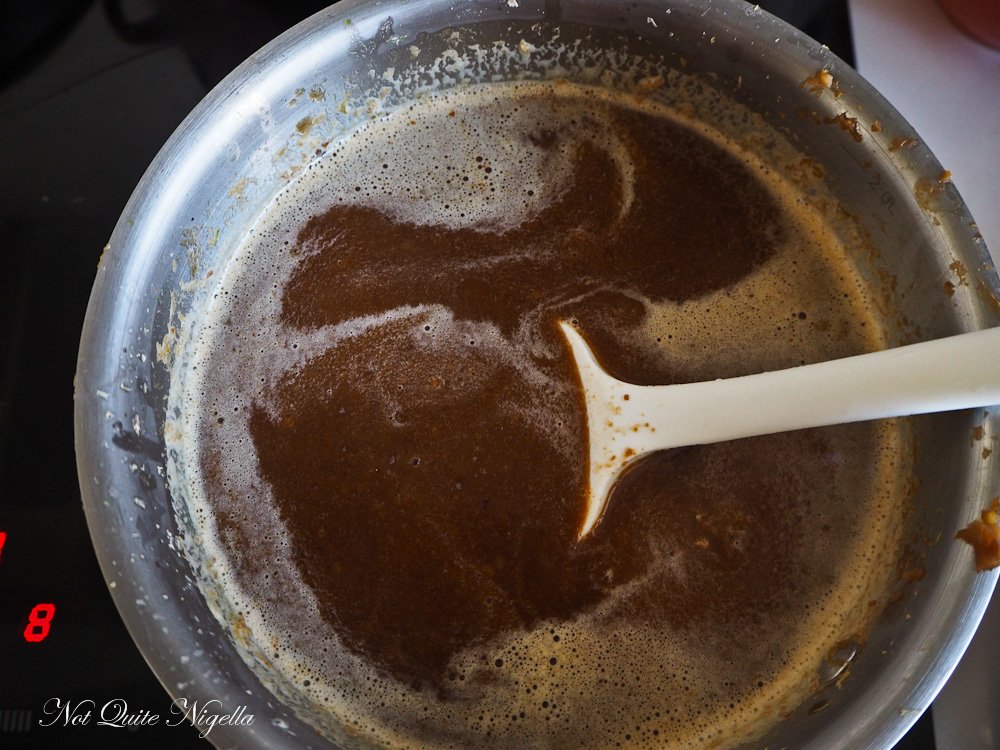 Step 2 - Mix all of the ingredients for the stir fry sauce in a cup and have it ready. 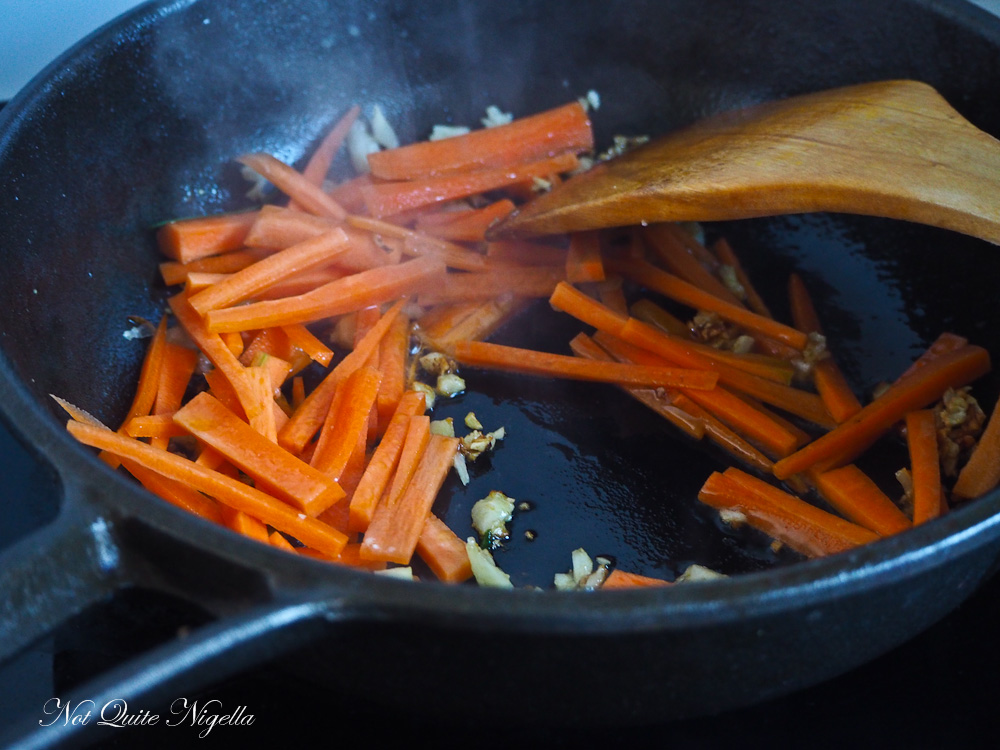 Step 3 - Heat the wok or a large frypan. Drain the noodles and have all of the other ingredients ready to add to the wok as it is quick once you start cooking it. Heat the wok and add oil and fry the prawns until about 90% cooked through. Remove and set aside. Add the garlic and cook for a minute, then add the carrot and preserved turnip. 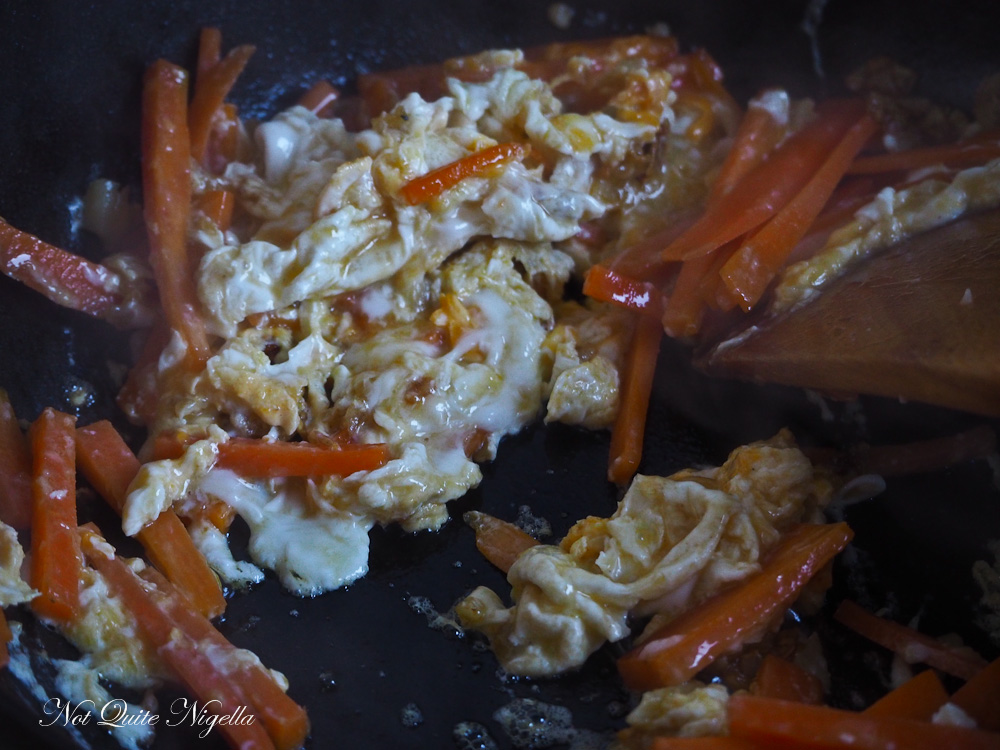 Push to one side of the pan and then break the eggs into the pan and scrambled and mix with the rest of the pan items. Add the noodles and add half of the stir fry sauce and gently mix to combine (you can use two wok ladles to lift and turn). Add the bean sprouts, garlic chives and then the prawns back into the pan. Add the pad thai sauce 1/4 cup at a time until it coats the noodles and keep adding until it has that magical taste of sour and sweet that is the hallmark of Pad Thai (I used about a cup of the sauce). 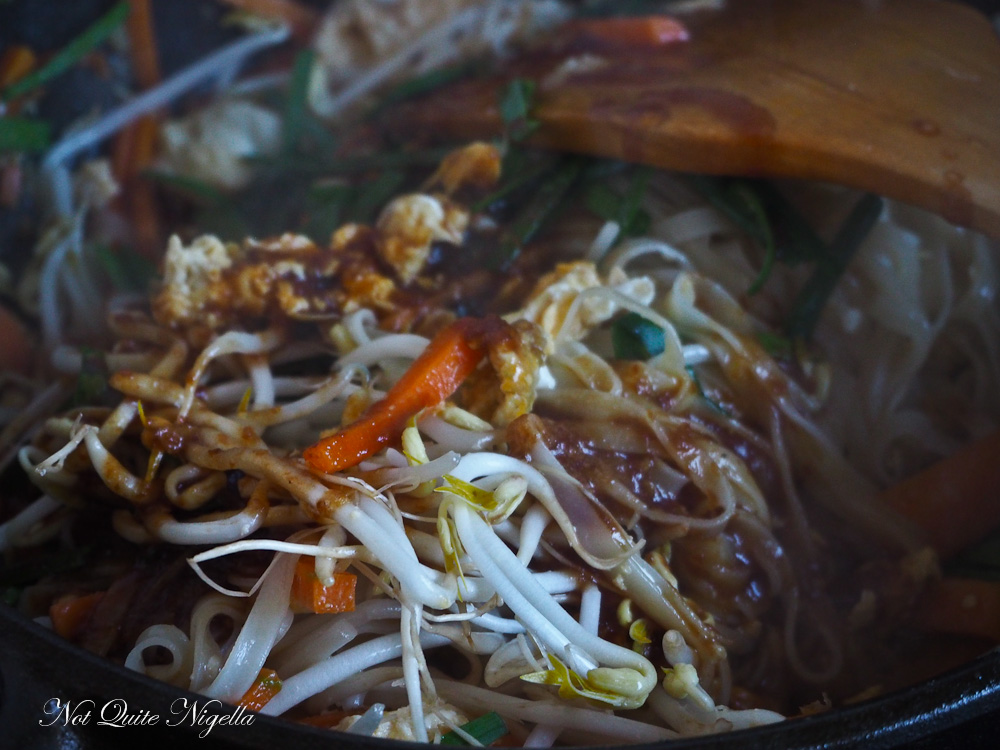 *Step 4 - *Remove from the pan and serve with extra bean sprouts, lime and topped with the peanuts. Serve immediately.