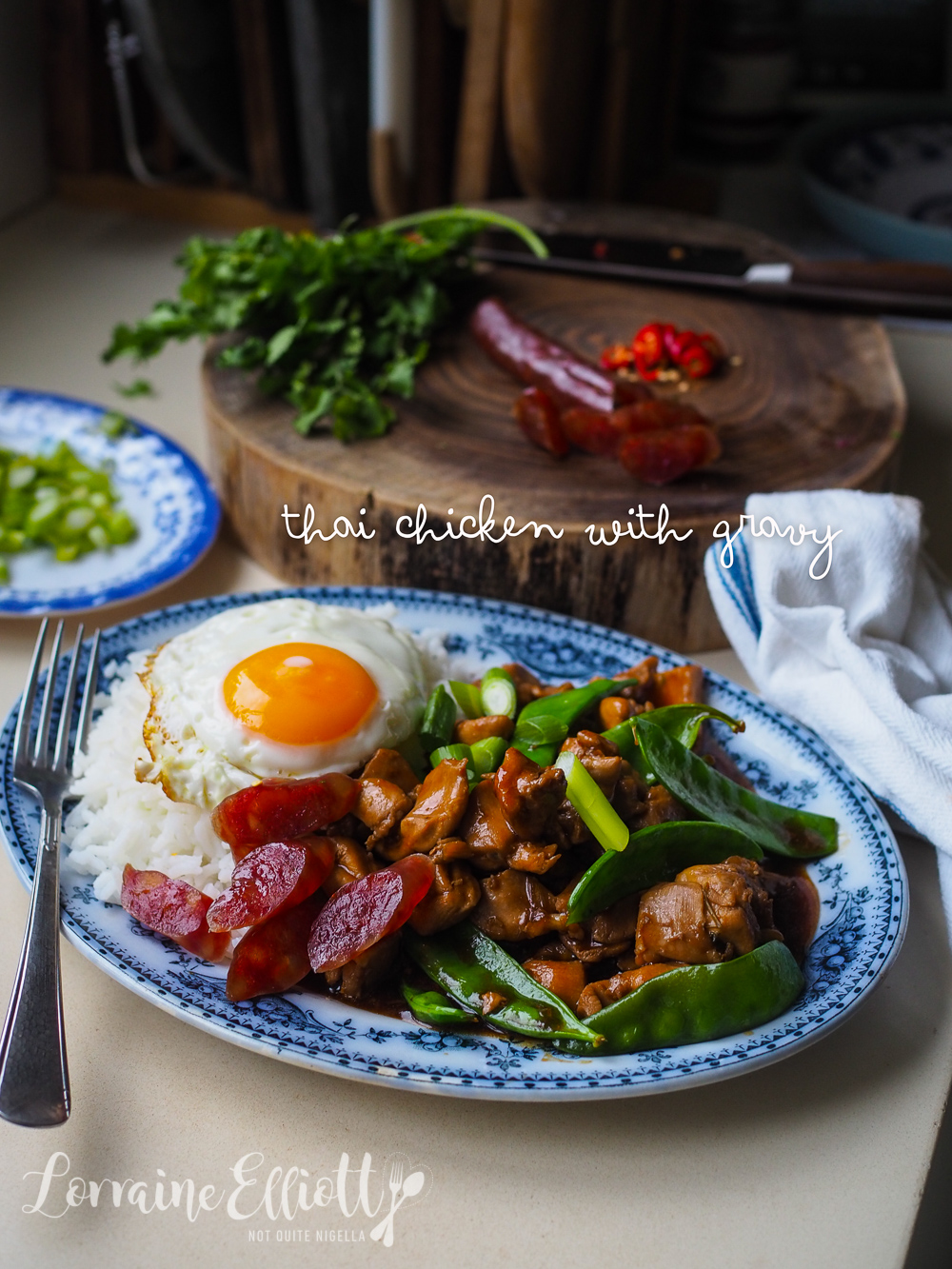 Khao Nha Kai or Thai Chicken in Gravy with Rice ข้าวหน้าไก่ is a wonderful Thai chicken and rice dish. It's a Thai Chinese dish that is considered a bit of a national treasure yet you may not find it at your local Thai restaurant. That's not to say that it's not delicious because it is lip smackingly good and a pushy recipe Dear Reader!

The first time I ate this Thai Chicken in Gravy with Rice was on an island 20 minutes from Phuket called Koh Ya Noi at Cape Kudu resort. It was an item offered at the resort's main restaurant and I was so in love with it that I asked if they could teach me the recipe during my private cooking class. 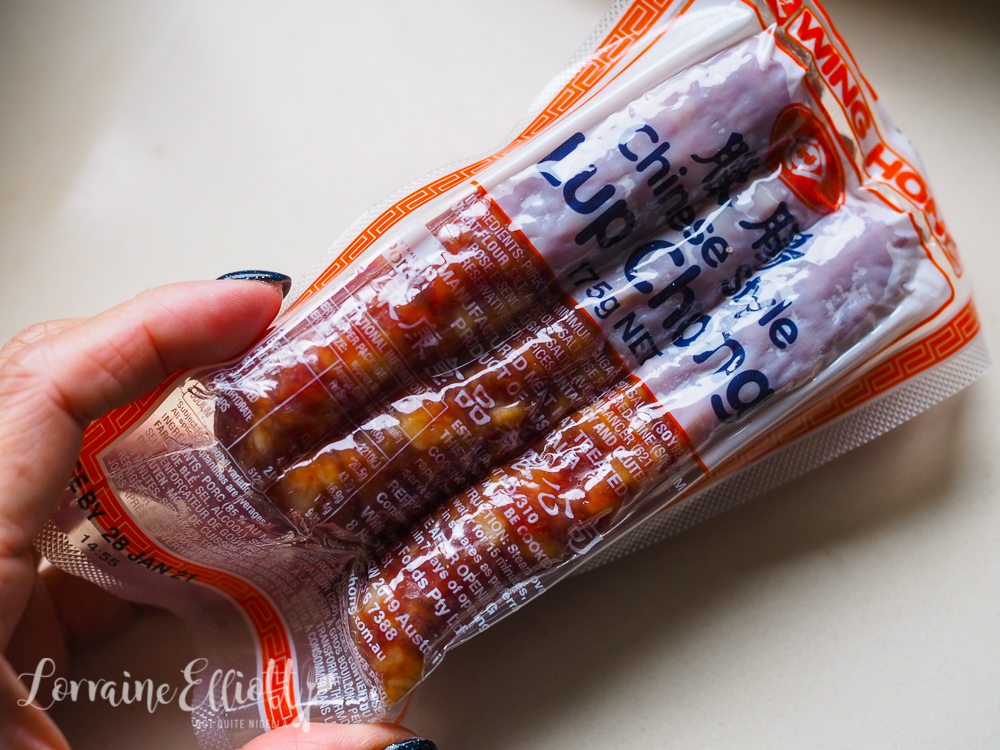 What is Lup Cheong? Lup Cheong is a dry, hard pork sausage found at Asian grocery stores and supermarkets and is already cooked and shelf stable. It is made up of pork and visible pork fat in larger chunks than say in salami. Once you open the packet you need to refrigerate it. 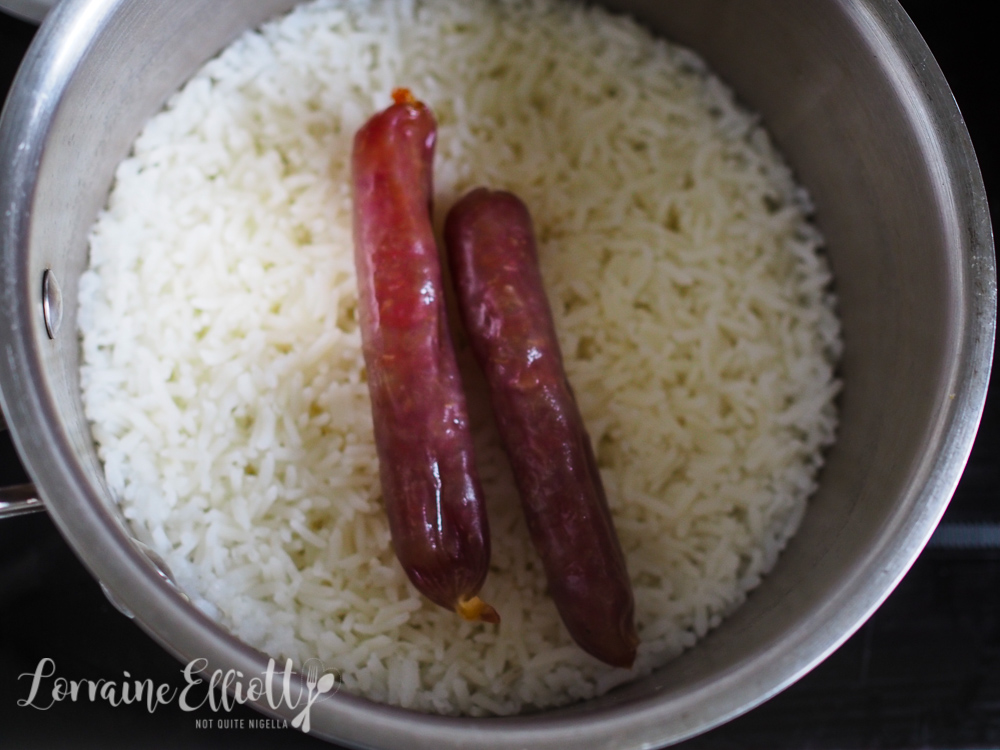 I put lup cheong on top of rice while it is steaming and it heats it through and some of the those delicious juices seep into the steaming rice too! It can be made with duck and sometimes chicken too. In this recipe it is optional but it adds SO much flavour (and for me, isn't optional at all!). 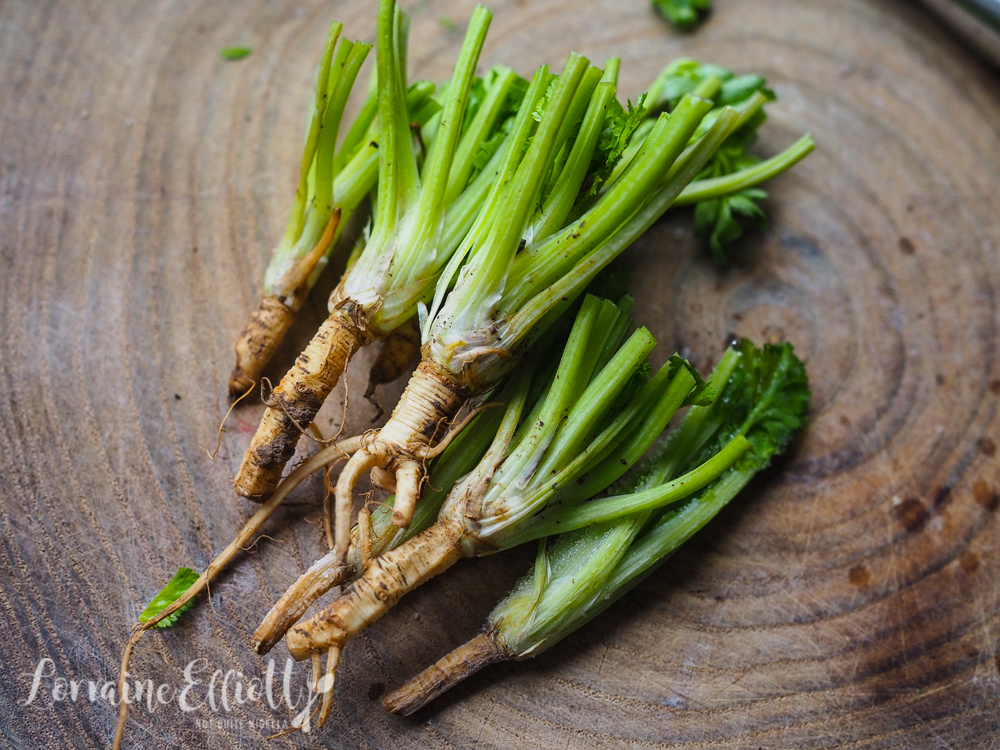 Coriander roots: Coriander root is one of the bases for Thai cuisine and has a great flavour of its own and it tastes different from the leaves. It reminds me of a cross between celeriac and coriander leaves. In Australia coriander or cilantro is sold with the roots attached but in the UK it is not and you need to buy the living plant to get the roots. Be sure to rinse the base of the green stems well as there is a lot of hidden dirt in the crevices. You can also freeze coriander roots in ziplock bags. I do this when I get a bunch of coriander but can't use the roots straight away.

Other vegetables: I added 250g/8.8ozs. of snow peas but you can also use mushrooms too (shiitake mushrooms work really well). 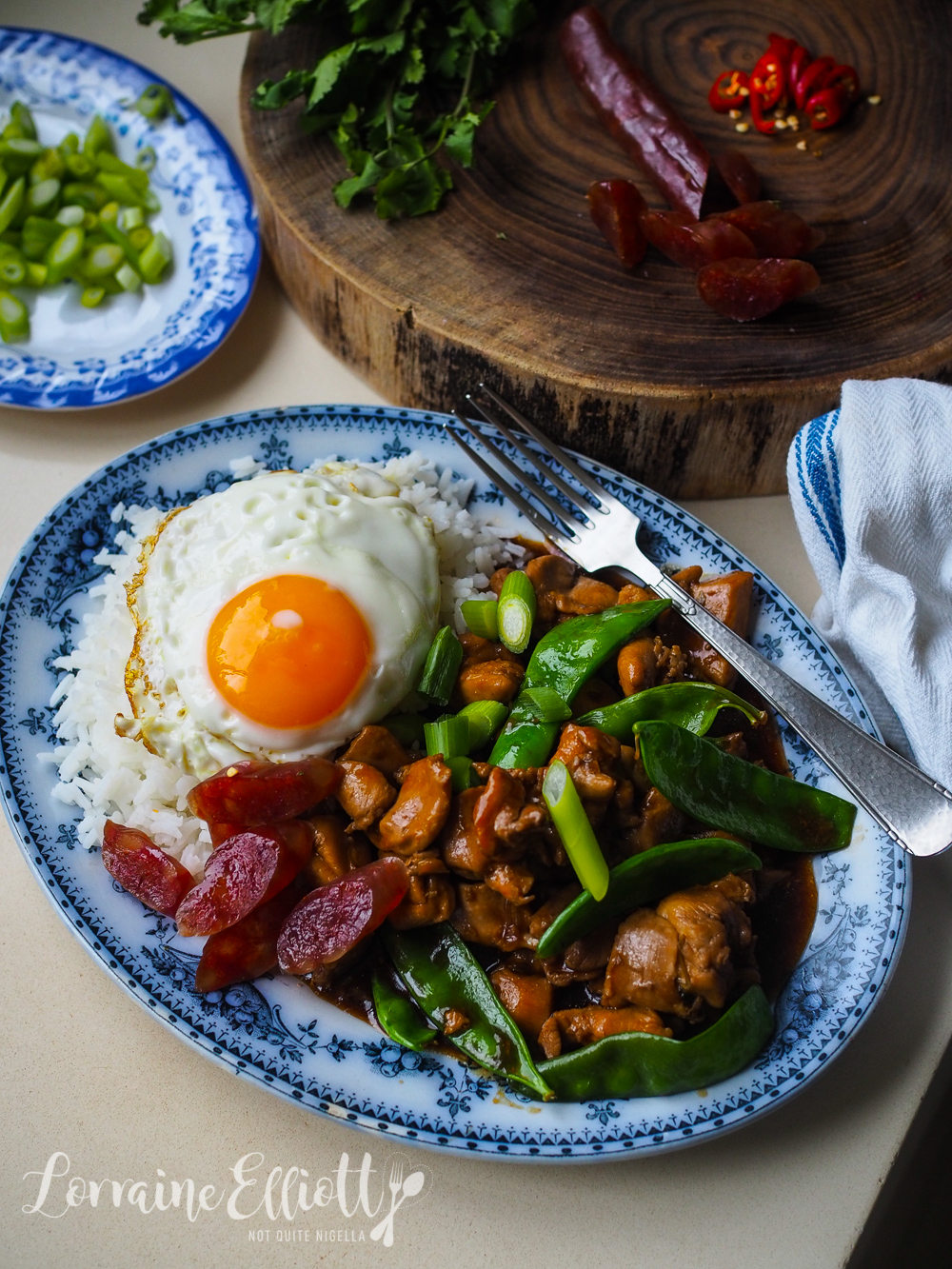 This is a Thai dish that isn't particularly spicy. My chilli measurements are rough in this recipe because it depends on how spicy you like things and some chillies are hotter than others. Sometimes I think I'm broken for my chilli meter. Things that have other people huffing and puffing are just mildly tingly to me. It all came about last year when Monica gave me some Carolina Reaper chillies.

Carolina Reapers are extremely hot chillies. Just for comparison a Thai birds eye chilli is 150,000 SHUs (Scoville heat units) while a Carolina Reaper is 1,569,383 SHUs (pepper spray is 2,000,000 SHUs). You can actually smell danger when you open up some Carolina Reapers and your brain will alert you to not eat these. I can only add a quarter of a fresh Carolina Reaper chilli to any recipe and it will make the entire thing very, very hot and spicy. 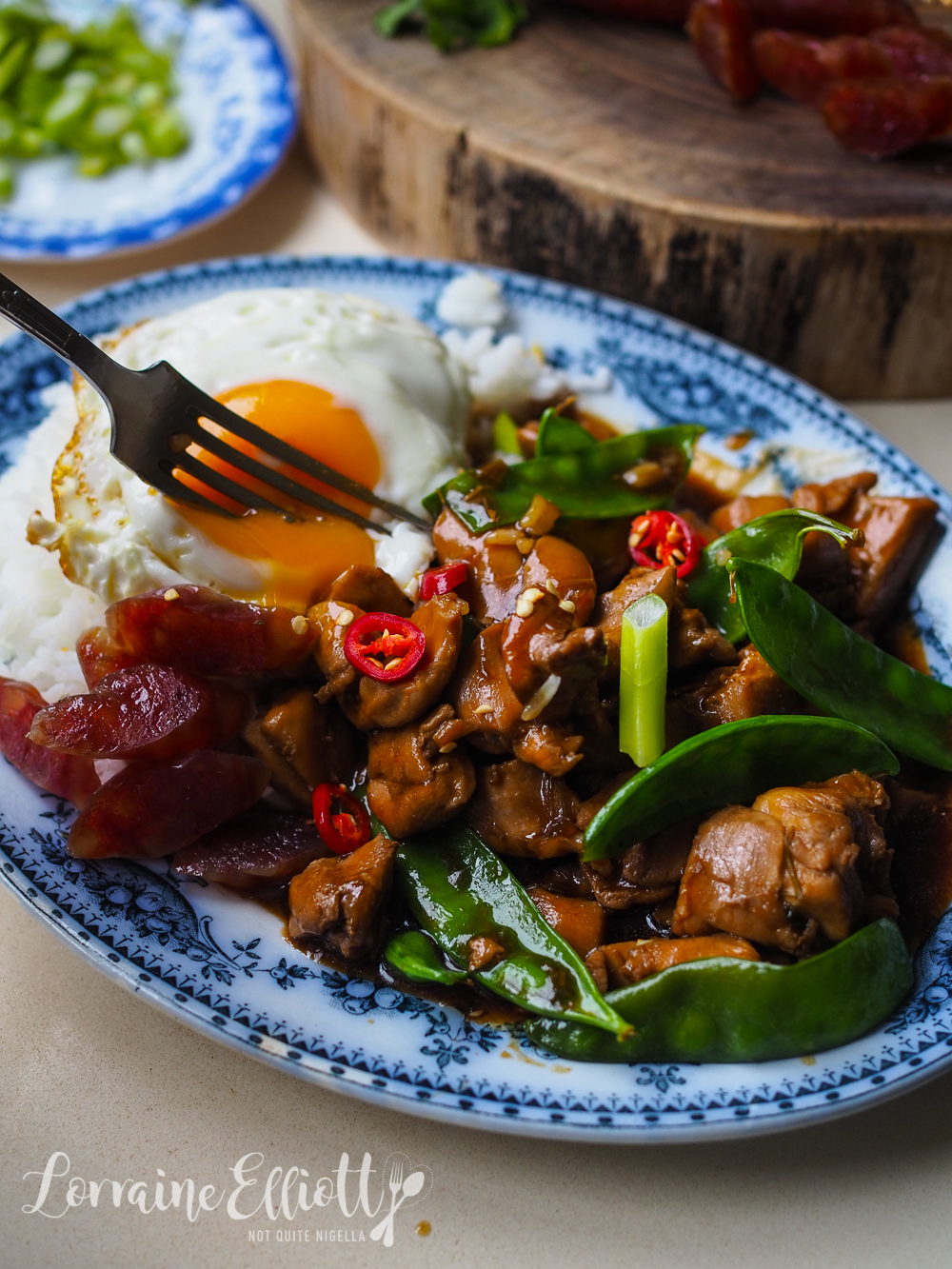 Note: I usually start steaming the rice before I start making the chicken because the chicken is really quick and easy. I also place the Chinese sausage on top of the rice while it cooks so that it steams and heats through.

Step 1 - Mix up the gravy ingredients together in a jug to help you measure it (soy sauce, water, sugar, Chinese rice wine, dark soy sauce, oyster sauce and white pepper). Then fry the garlic, coriander roots and ginger in a large saucepan for a minute or two. Then add the chicken and brown the pieces for a couple of minutes stirring. 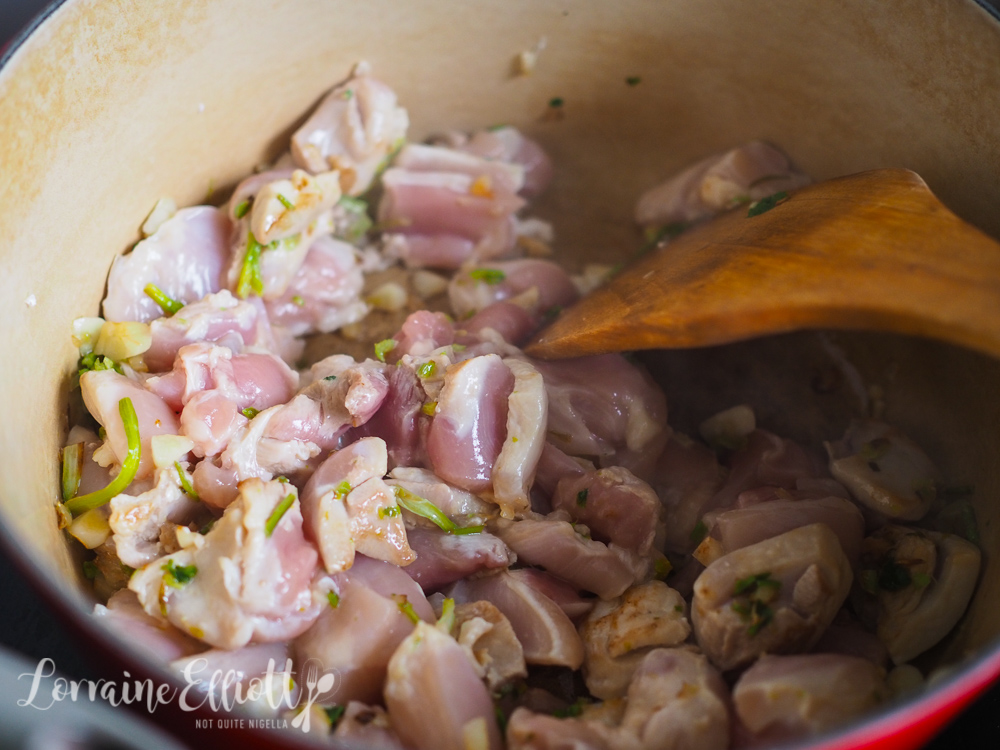 Step 2 - Add the gravy ingredients and bring to a boil and simmer for 10 minutes turning occasionally to coat the chicken. With 1 minute to go, add the snow peas. Then turn to low heat and push the chicken and snow peas to one side and stir in the cornflour into the liquid and stir and allow to thicken the sauce. While the chicken is cooking, you can also fry the eggs.

Step 4 - Serve the rice, chicken and gravy with the sliced Lup Cheong, spring onions, fried egg and chilli. It's heavenly!