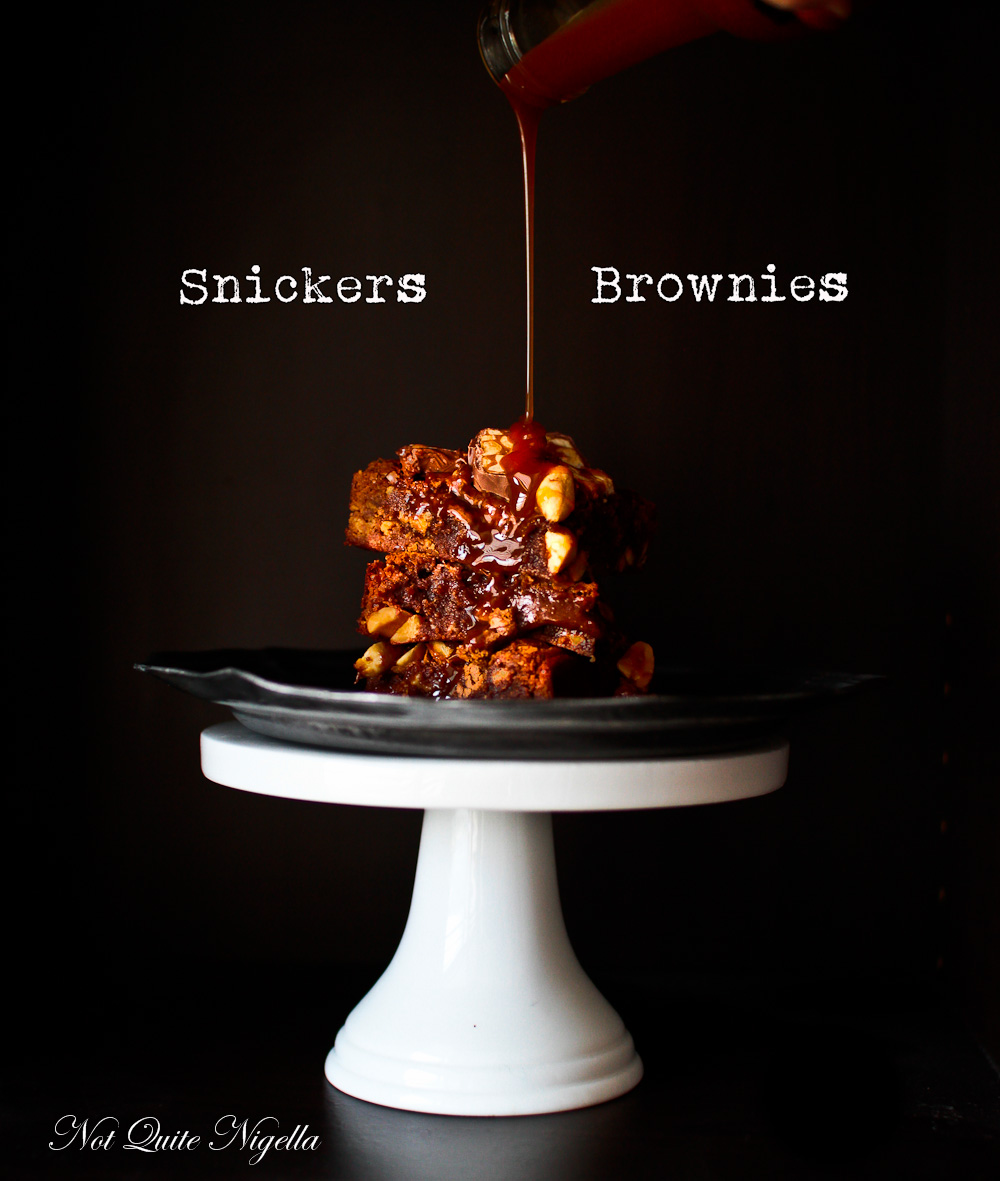 Snickers. Brownies. Combine two favourite things together and what you end up is more than just a sum of the parts. It's a gooey salty sweet concoction of pure chocolate decadence. With rich couverture milk chocolate, roasted peanuts and salted caramel sauce and topped with slices of Snickers this is the ultimate brownie for Father's Day coming up or just because!

Psst! Just some housekeeping first! I have some rather exciting but nerve-wracking news! I'm going to be on Mornings on 9 this morning just after 10:30am! It's live so I am very nervous and I hope that I don't become too tongue tied! Wish me luck! ;)

When I returned from my recent fortnight in Canada, I discovered that things at Chez Elliott had gone relatively well. With a few exceptions. Mr NQN had in the two weeks disowned most of his family (it's a long and sordid story that I'm not allowed to talk about) and he had also paid $180 for bottled water at a restaurant at a dinner for 12 people. A bit closer to home, he had his first foray into cooking for himself. One night before I left I asked him to throw a few things in the slow cooker and later that day emerged a stew. "Really? Is it that easy?" he said so while I was away he set about cooking something himself.

"Today I cooked something in the slow cooker!" he told me.

"Oh cool, how was it?" I asked excitedly.

"Absolute s&*(" he said bluntly. Alas, the poor man had not fared well with the slow cooker. 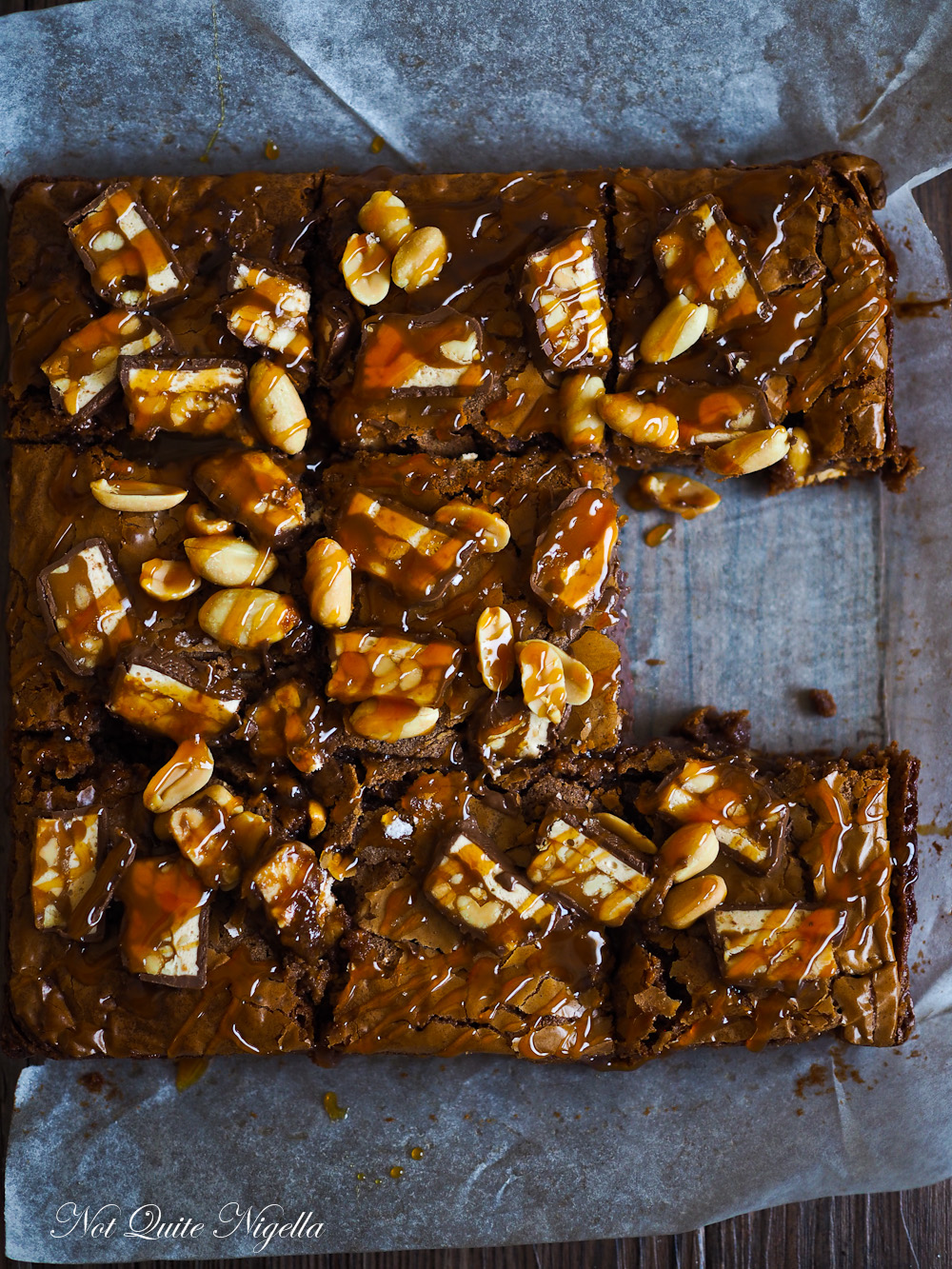 I also looked at the dishwasher when I got back. A lot of the dishes were moldy even though it was all washed. I asked him about them and he appeared a little affronted. "Do you mean the dishes that I did just before you arrived back?" he said, indignantly.

"But why are they moldy?" I asked. I realised that he had left them in the dishwasher for the whole two weeks before throwing in a dishwasher tablet and flipping the switch just before I got home... I don't quite understand the other gender at times and sometimes I understand my husband less so. I did marry one of the only men that doesn't like cake (honestly what were the odds?) but when I gave him a slice of this Snickers brownie he paid it the highest compliment he has ever given any food that I have served him ever and he did so unprompted.

"This is absolutely brilliant," he said chewing on a rich bite.

"Pardon?" I said. I was washing up and thought that I had misheard. Because his usual response to anything that I give him is "It's good" (cut to a stab to the heart emoticon).

"It's bloody brilliant," he said resolutely. Well I almost dropped the cup I was holding. The thing is, these Snickers brownies are really very good - I know that sounds totally immodest but if you fall hard for that peanut, caramel and chocolate combination (and really who doesn't?) you really have to give these a go. I added a salted aspect with salted peanuts and salted caramel sauce.

The brownies are very easy to make - pinky swear! It's really stirring everything in a pot. It was almost too easy given the reward of eating them. If you were making something special for Father's Day this weekend then I urge you to give these brownies a go. And yep this is definitely a pushy recipe Dear Reader! It came from Mr NQN's mouth! ;)

So tell me Dear Reader, do you like Snickers and or brownies? And are your friends or family very generous with compliments about cooking or are they more the one or two word type? Will you be doing anything special this Father's Day? 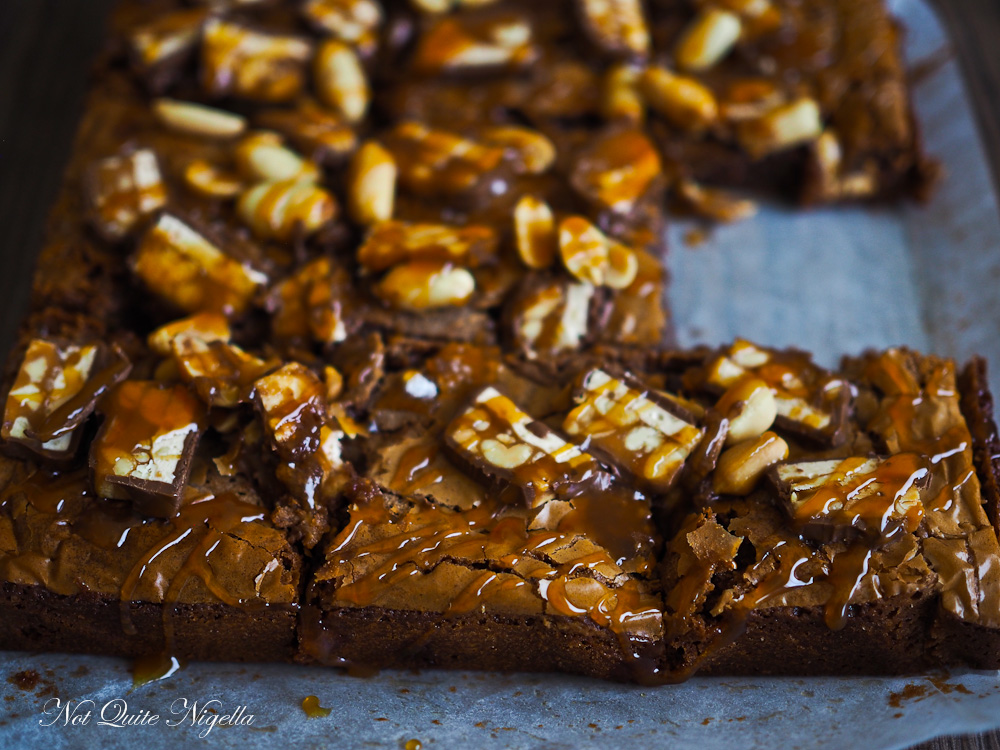 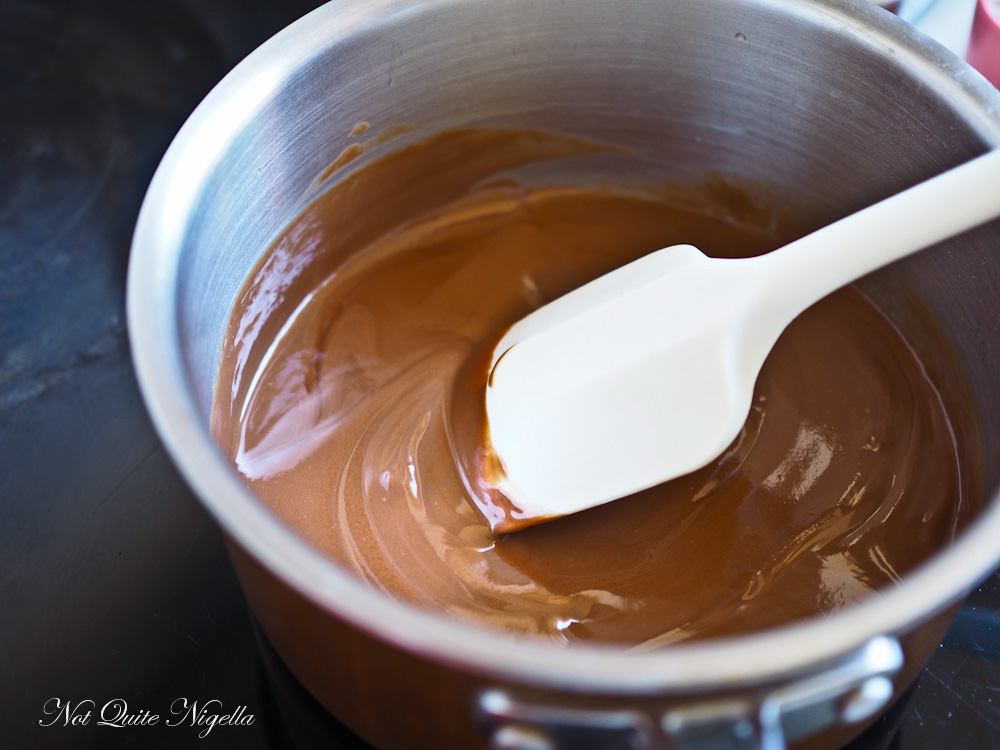 I'm entirely certain that you could have done without this image...

Step 1 - Preheat oven to 160C/320F. Line a 20x20cm or 8x8 inch baking tin with parchment. In a saucepan melt the butter completely. Add the chocolate and and melt completely. Remove the pan from the heat and add the sugar and stir. Add the eggs one at a time, incorporating them after each addition. 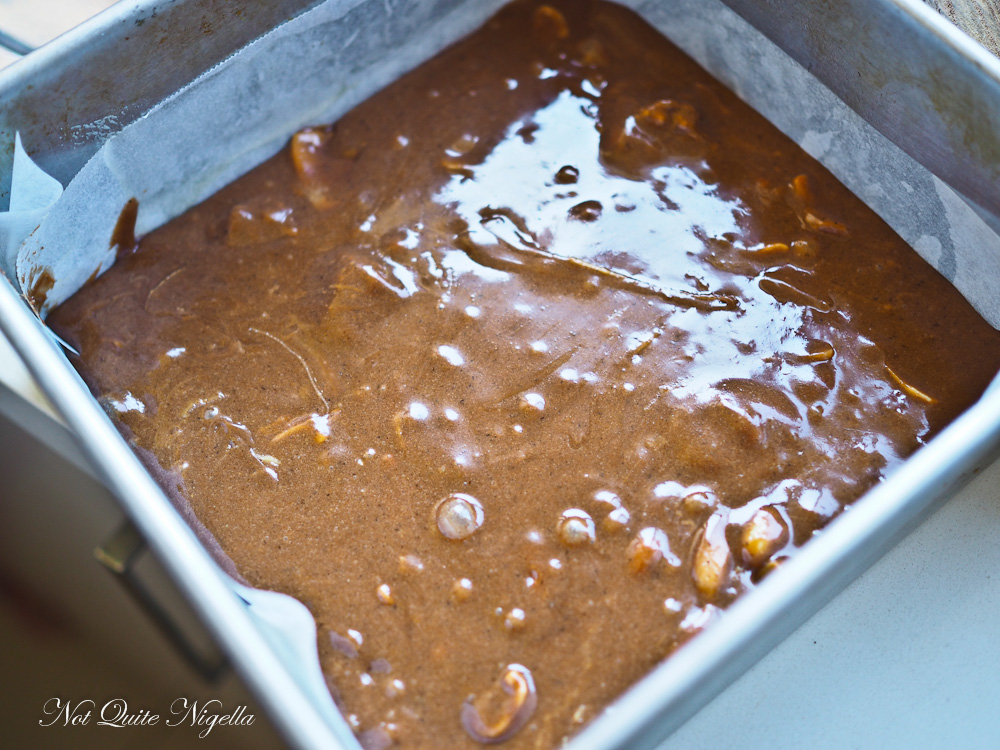 Step 2 - Add the buckwheat flour and stir vigorously with a spatula or wooden spoon until thickened - about 3-4 minutes. Add in the peanut butter and stir until swirled through evenly-ish. Mix in the 1/2 cup of salted peanuts and one and a half of the Snickers bars and scoop into the prepared tin. 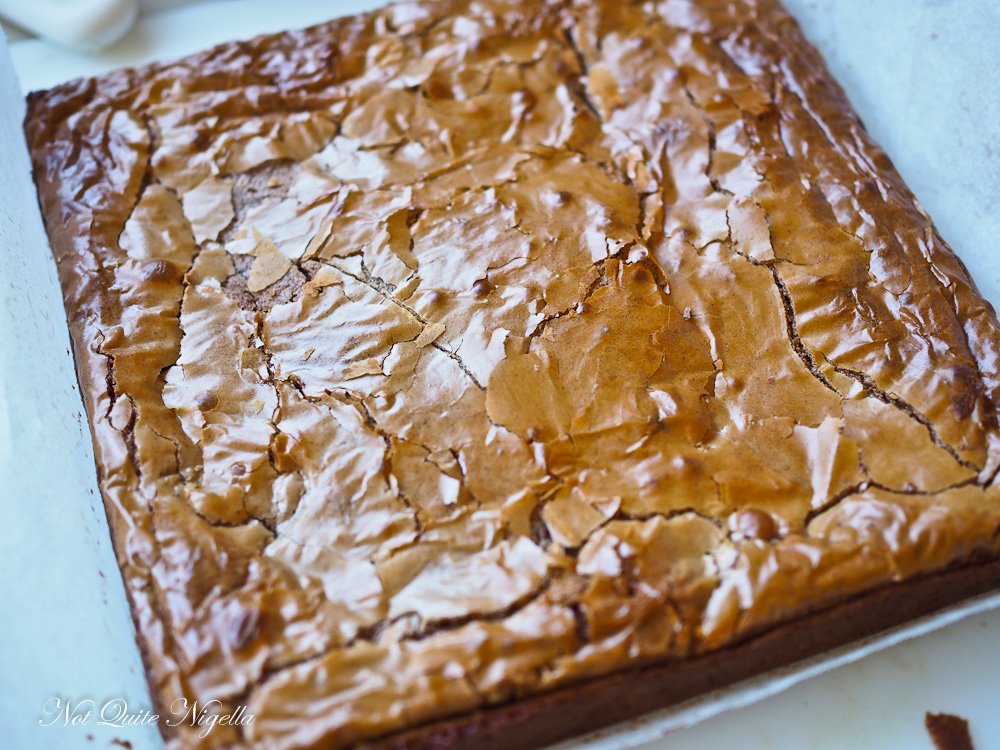 Step 3 - Bake for 35 minutes. The top should have a smooth crust. Allow to cool for 30 minutes. Top with the remaining Snickers bar pieces, 1/4 cup peanuts and drizzle with salted caramel. 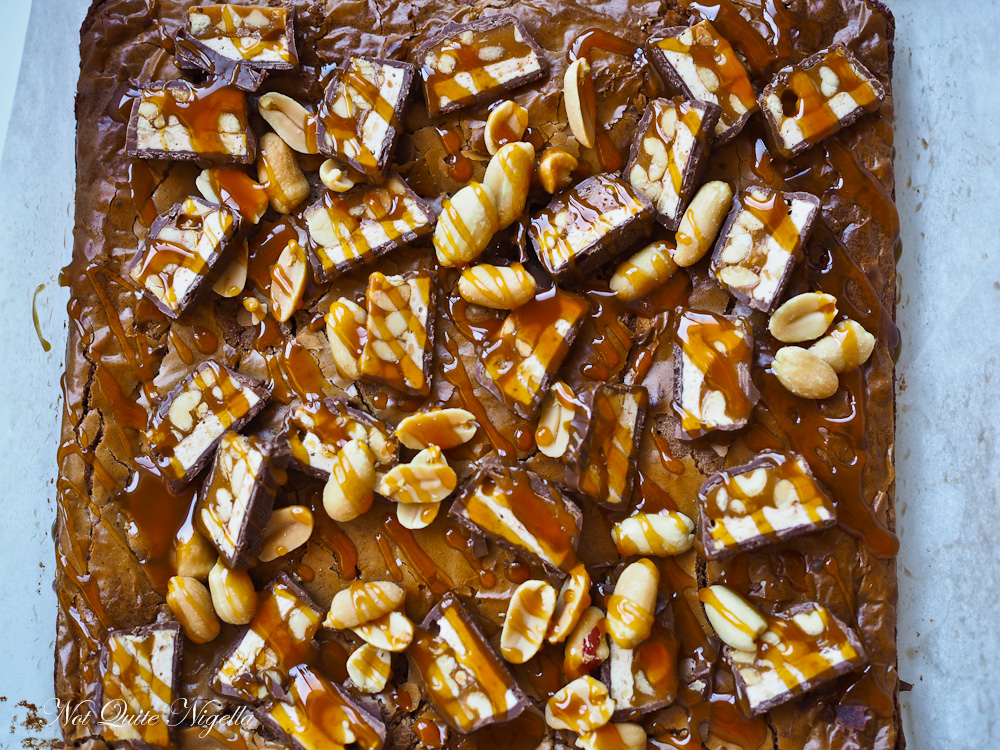