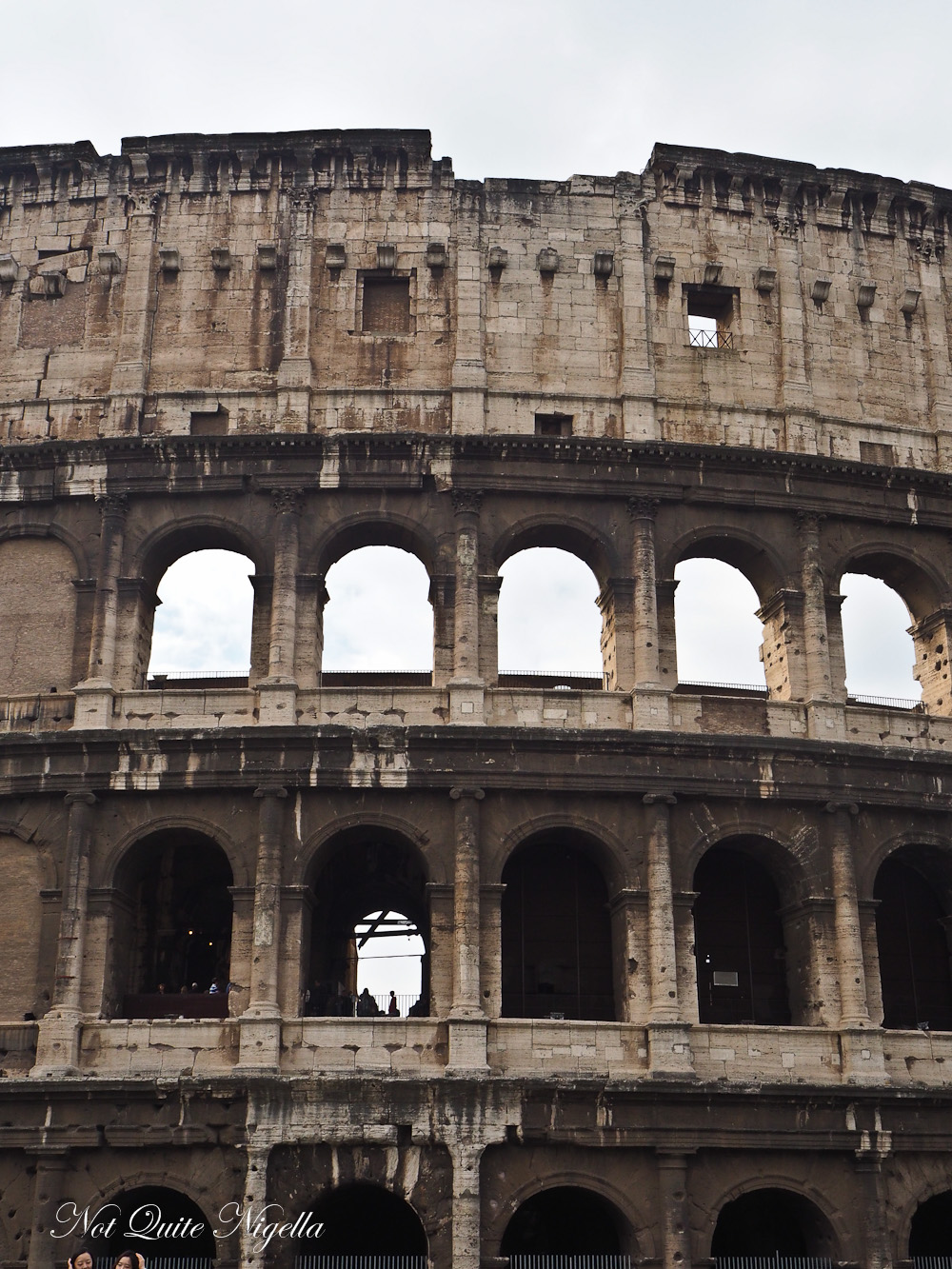 *Rome's Jewish quarter is a must visit for history buffs as well as those intrigued by the unique Roman Jewish cuisine that the area is known for. A bucket list food for me was the Carciofi alla Giudia or Jewish artichokes that resemble sunflowers - something that everyone has to try at least once. Also the Jewish pizza or sweet fruit cake is not to be missed! *

Walking around a city like Rome where there are so many ruins and artifacts of ancient life that it only takes minutes of day dreaming and a slightly closed eye to imagine what life would have been like in ancient times. As we stand outside the Colosseum we imagine the deafening roar of the 50,000 strong spectators as the gladiators fought or the baying of the audience as ritual murders of Christian martyrs or animals were committed. It was a brutal time to live. 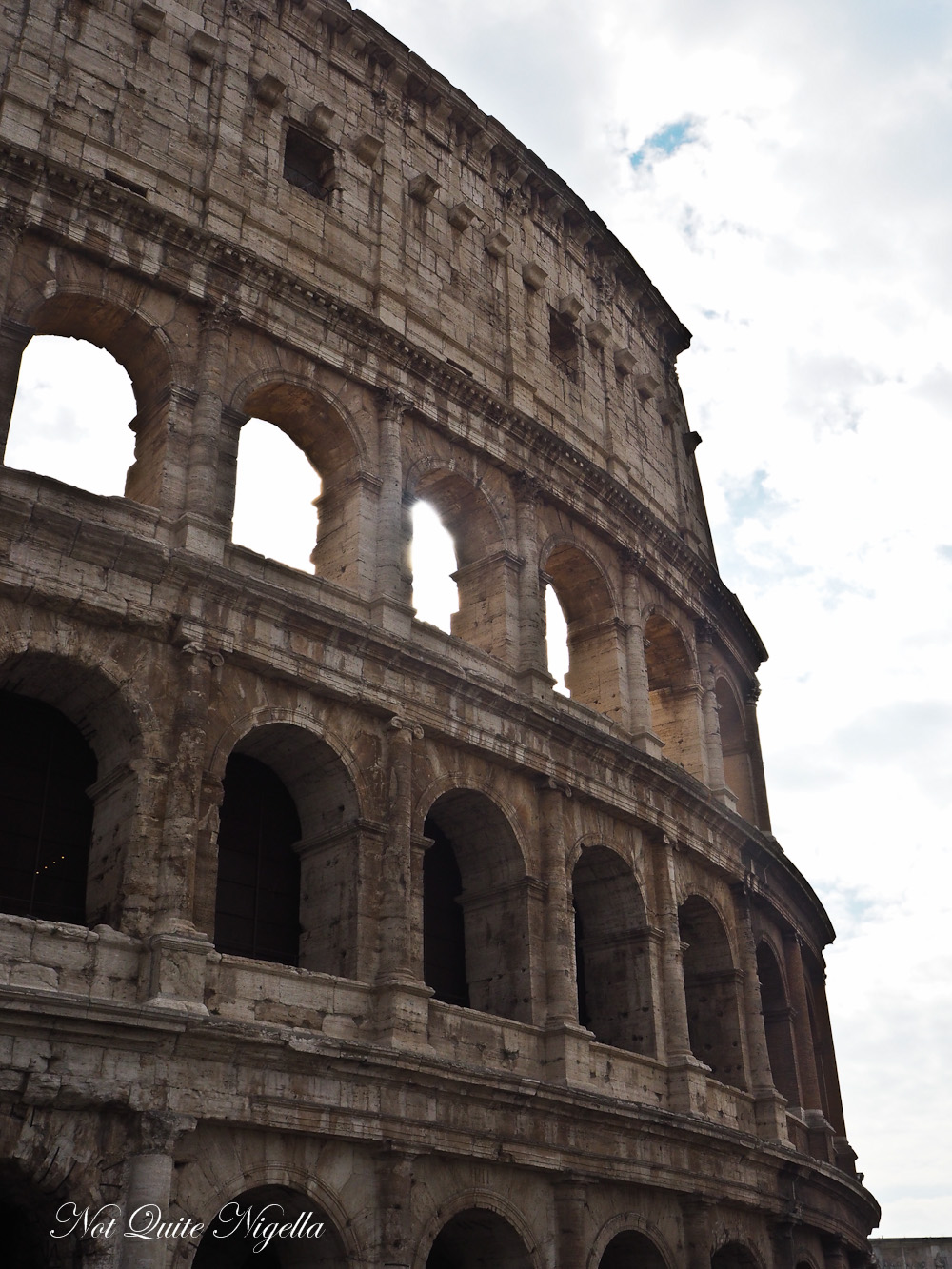 Another part of Rome's history that is no less startling is the Roman Ghetto. This is an area less than 10 minutes' walk away from the Colosseum and just a few minute's away from the The Victor Emmanuel monument. It is where the persecuted Jewish community were forced to live by decree of a Papal Bull issued by Pope Paul IV in 1555. 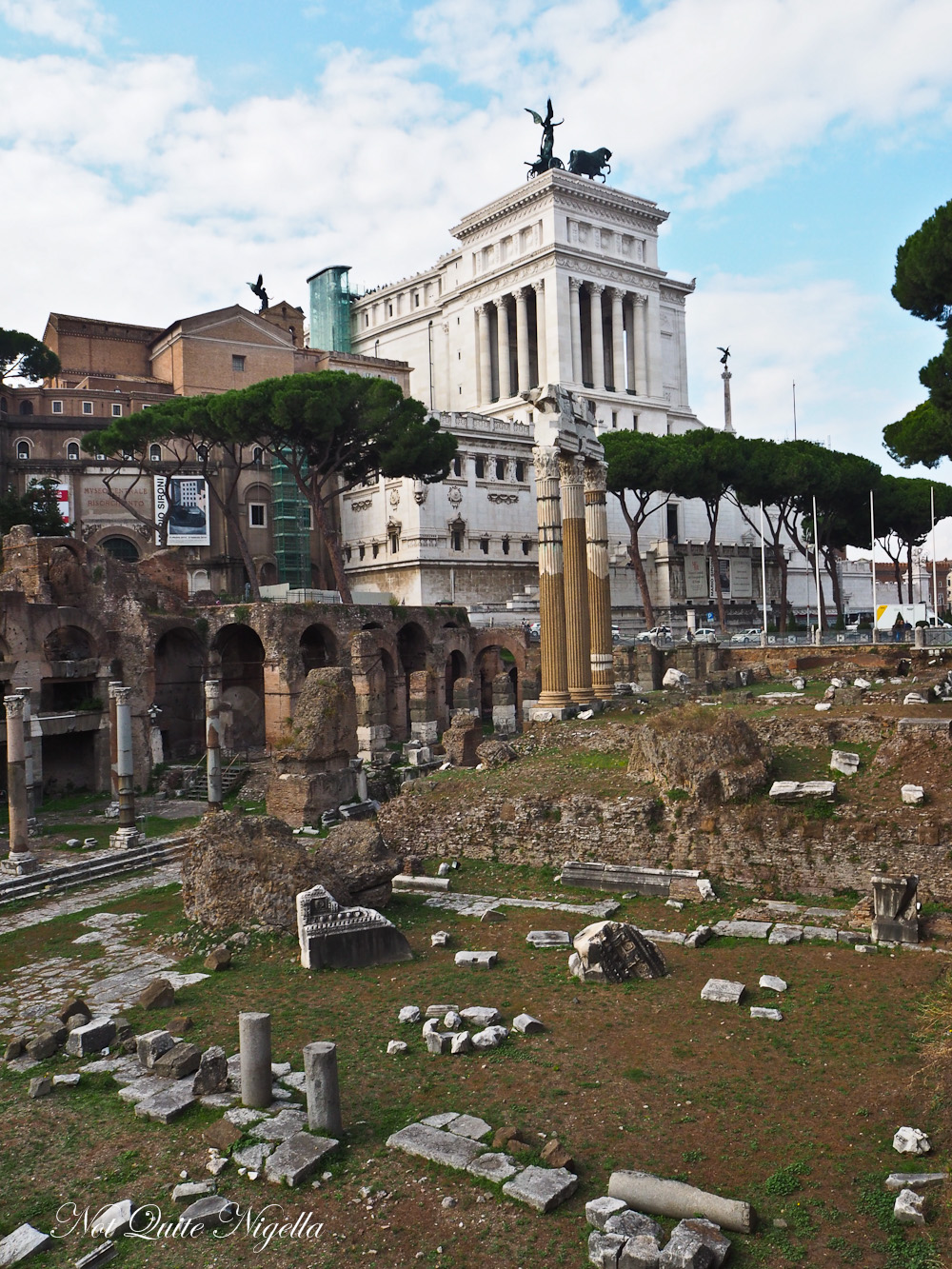 Jews had existed in Rome since 160 B.C. without persecution (although some arrived as slaves) for some time particularly during the Middle Ages where they were well regarded. Julius Caesar was said to be a friend of the Jewish people. As Christianity became more widespread, they became the subject of discrimination. 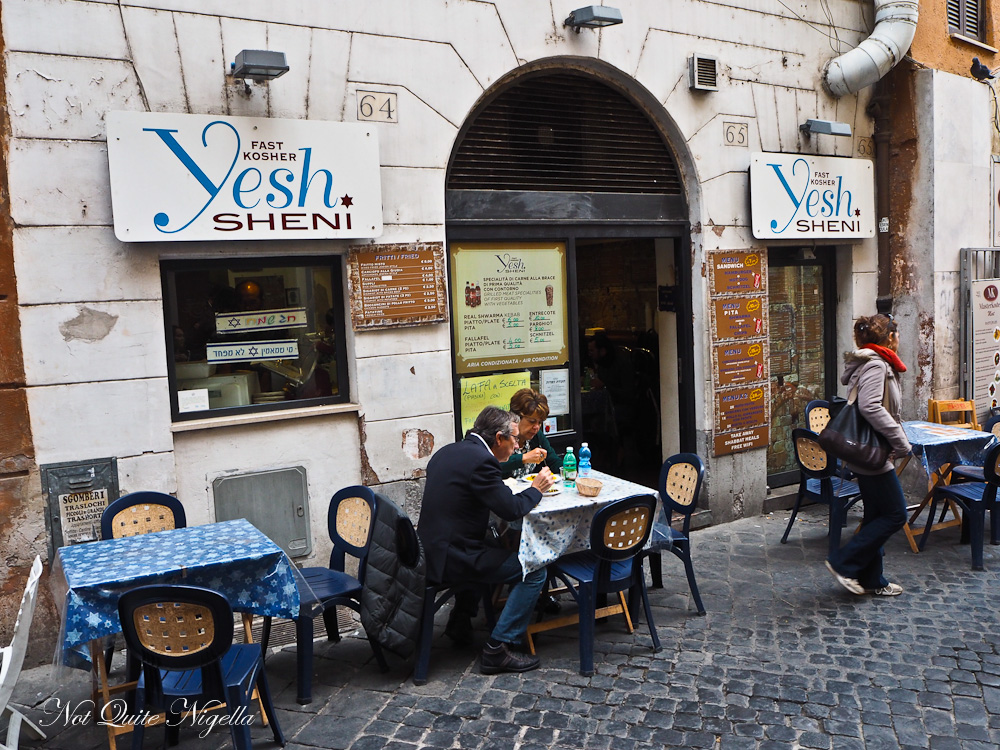 The bull still remains in effect today and has not been revoked although all of the ghettos have been long abolished. The location of the ghetto was based on the fact that many Jews already lived there but it was also near the River Tiber which was prone to over flooding. It was located in a 7 acre space between Via di Pescaria and the river Tiber. 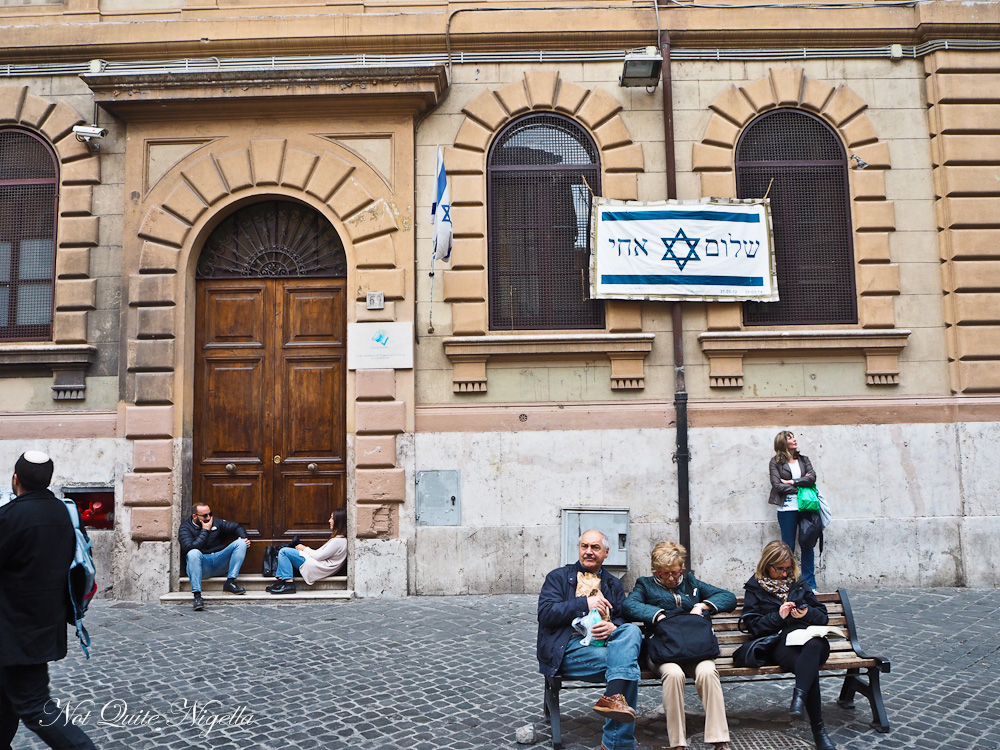 Conditions for the thousands of Jews in the ghetto were inhumane and they were doomed to live a life of poverty being denied access to skilled jobs. They were also ritually humiliated and persecuted and were forced to attend Catholic church to listen to sermons. Some stuffed wax into their ears in a form of protest. The idea behind the ghetto was that having one or two generations living in these conditions would convert them to Catholicism. 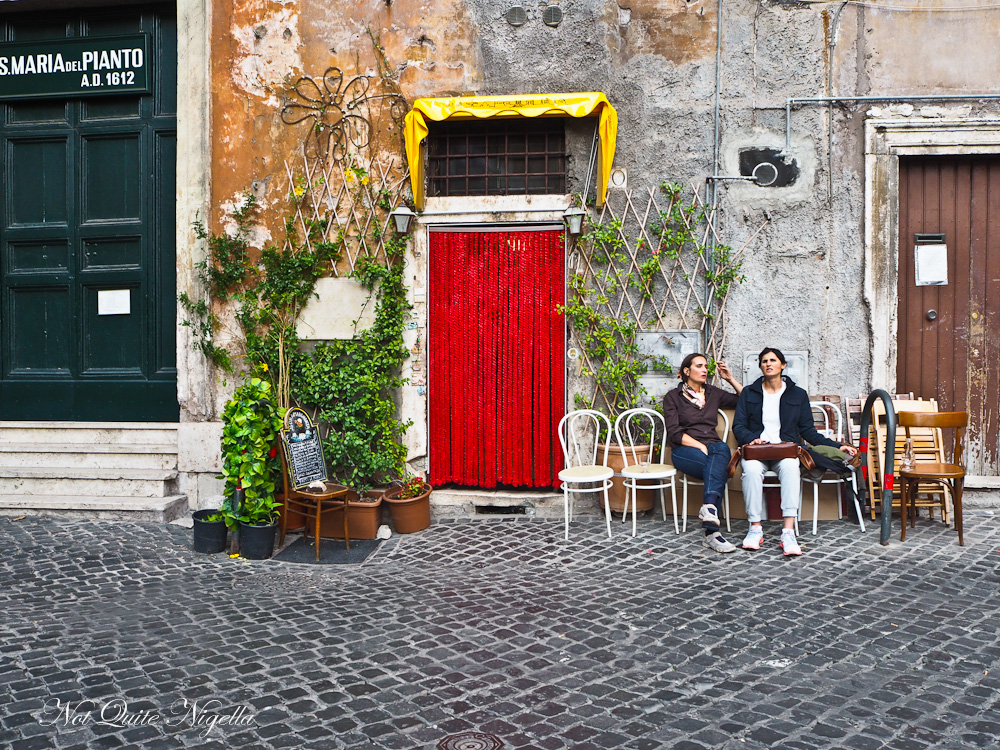 In the present day, of all the Jewish people living in Italy, about half of them live in Rome although only a small number still live in the area still called the ghetto. Today the ghetto has been long gone, demolished in 1888 but what remains is a vibrant and interesting area, particularly for those with an interest in food. 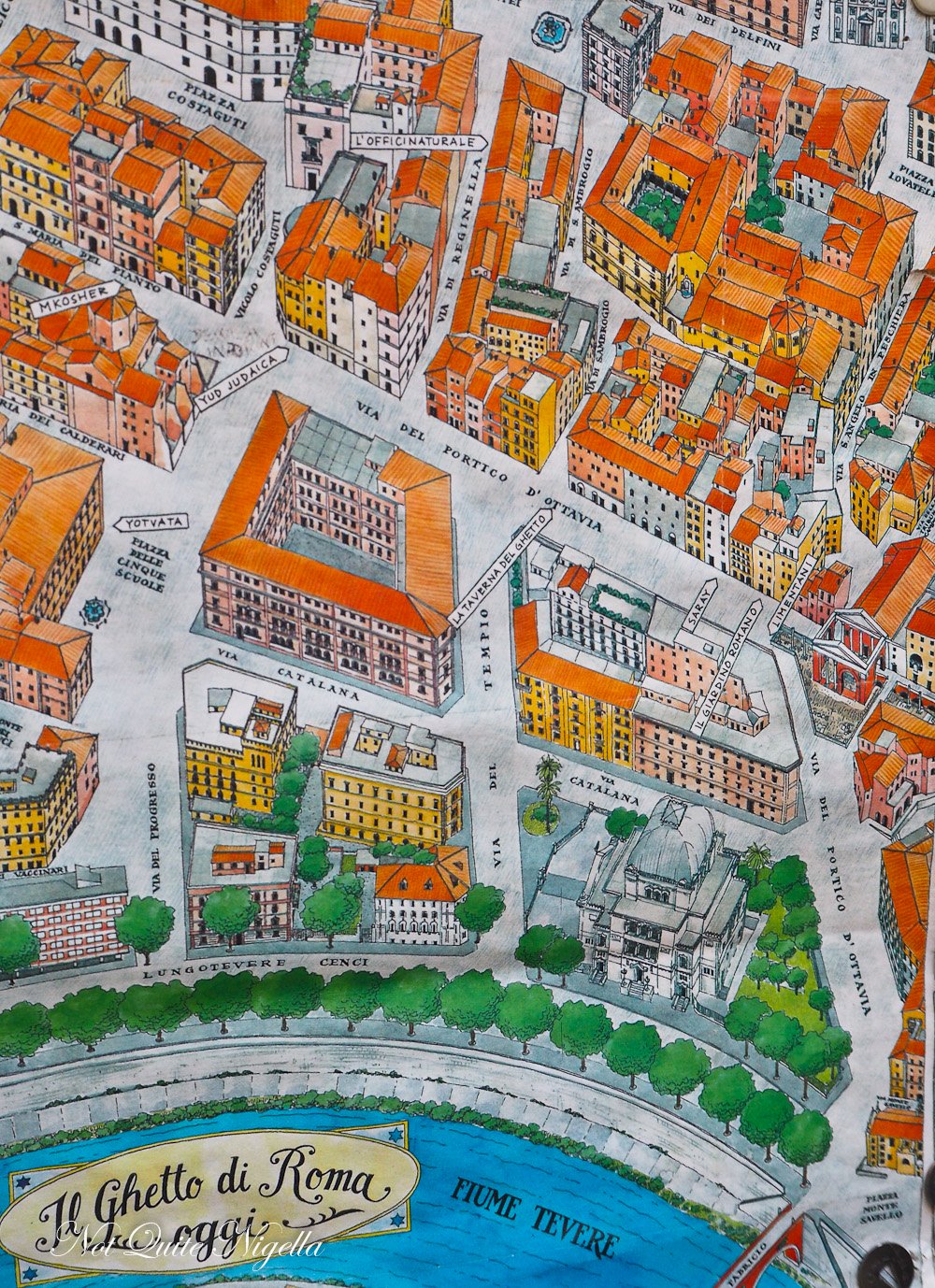 The main street for much of the Roman Jewish food is Via del Portico d'Ottavia. Many of these places observe kosher where dairy and meat must not mix. There are often separate restaurants for both, often just a couple of doors away. 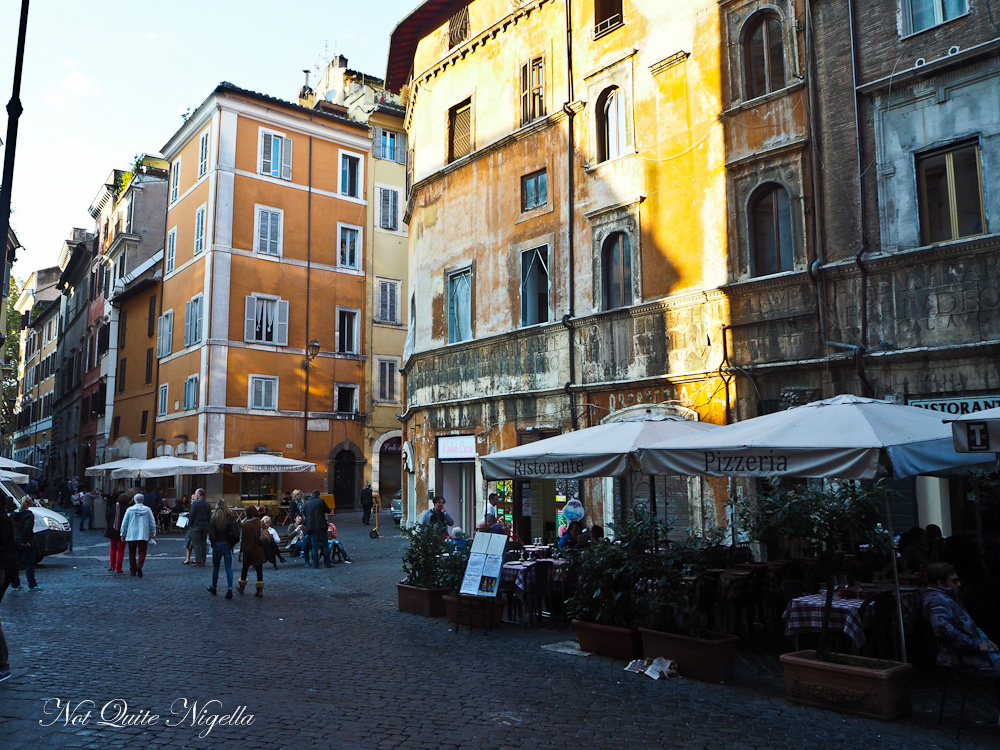 Our first stop is at number 1 Via del Portico d'Ottavia (which branches off from Via Santa Maria del Pianto) and the Il Boccione bakery located there. It may not look like much, in fact the first time I looked in the window curious, the cakes even looked burnt with just a couple of cakes in the window. They have however been making cakes using traditional recipes since Medieval times and even Pope Benedict XVI is a fan. 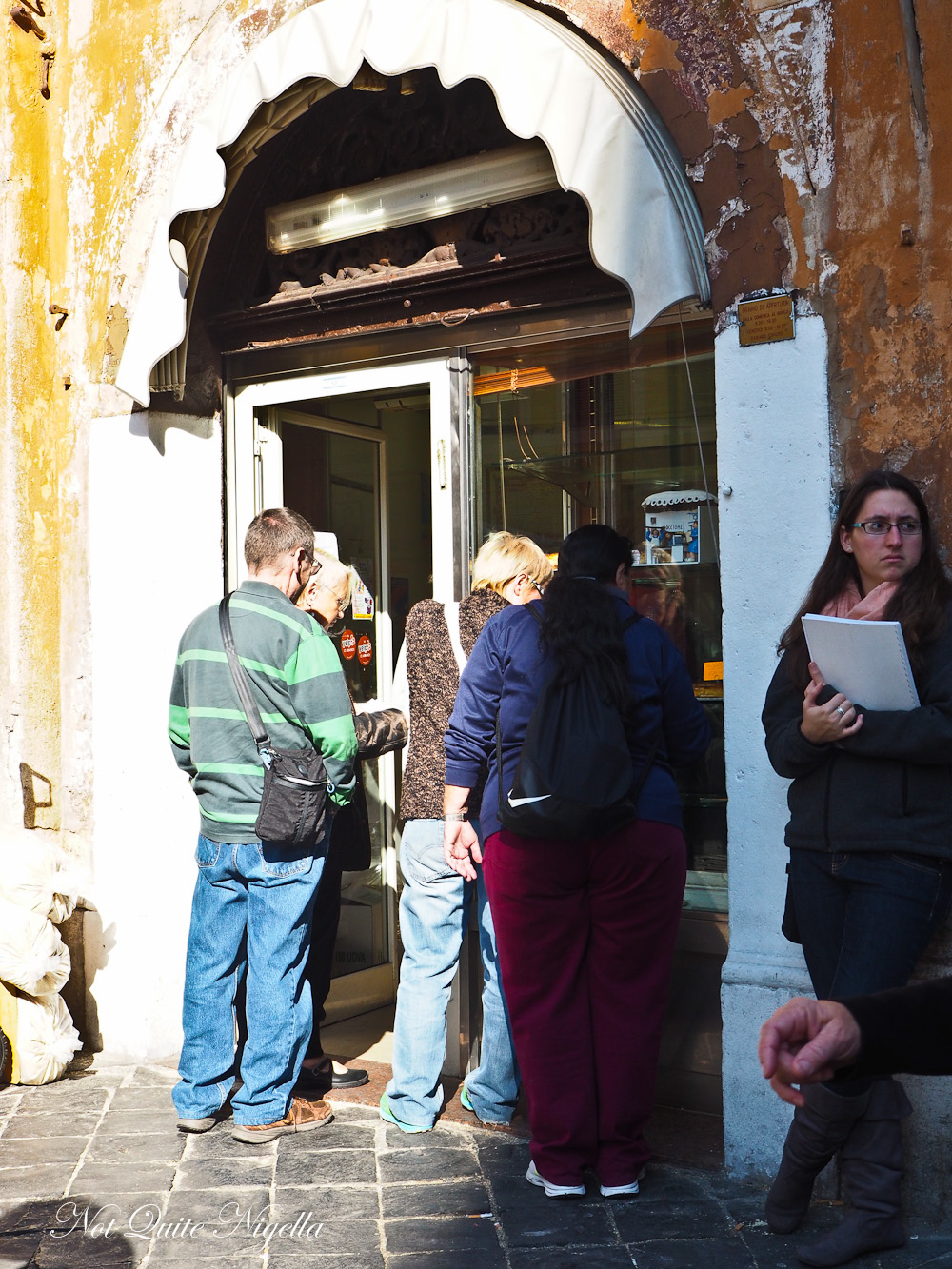 Ever since his visit and tacit endorsement the queues have formed for this bakery which is bereft of signage except for a star of David above the door. Their ricotta cake is said to be one of the best if not the best along with a "Jewish pizza" which is a sweet almond and raisin confection with cinnamon and pine nuts. 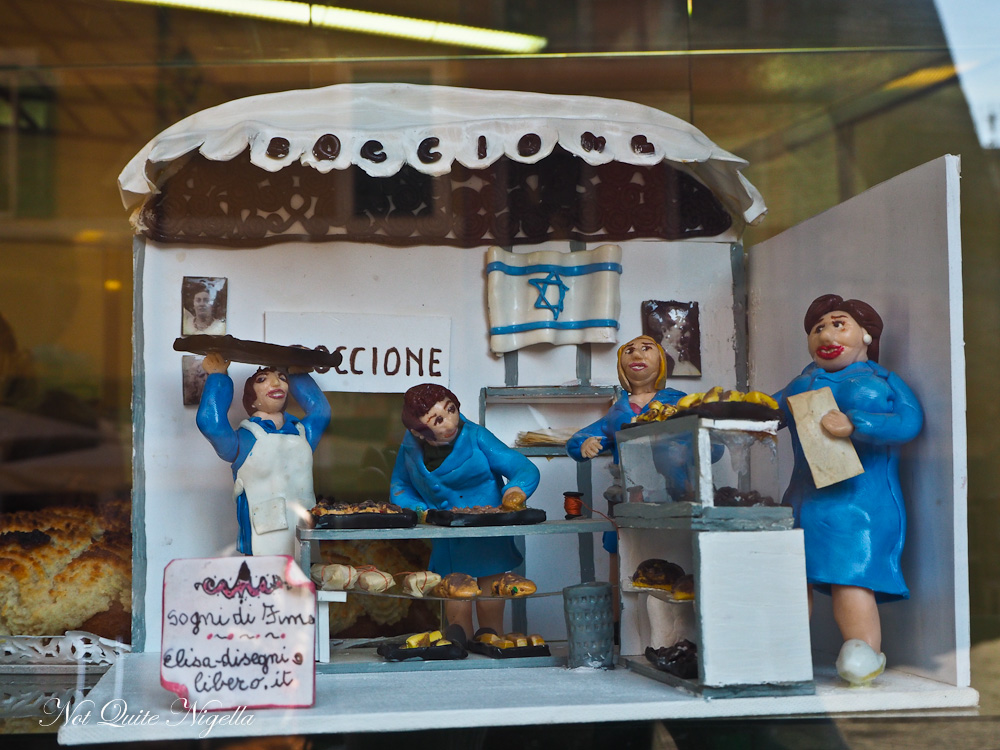 Service is brusque and not exactly welcoming although this can depend on who you get at the counter. The Jewish pizza, a cake called Pizza de Berride is a cake baked for special occasions or events such as a circumcision. Berride means "agreement" and refers to the agreement between God and Abraham. The woman behind the counter hacks off one rectangle and weighs it along with a plum jam crostata cake. Alas there is no ricotta and amarena cherry cake but we take our spoils and eat them outside on the bench before she tells us to get lost. 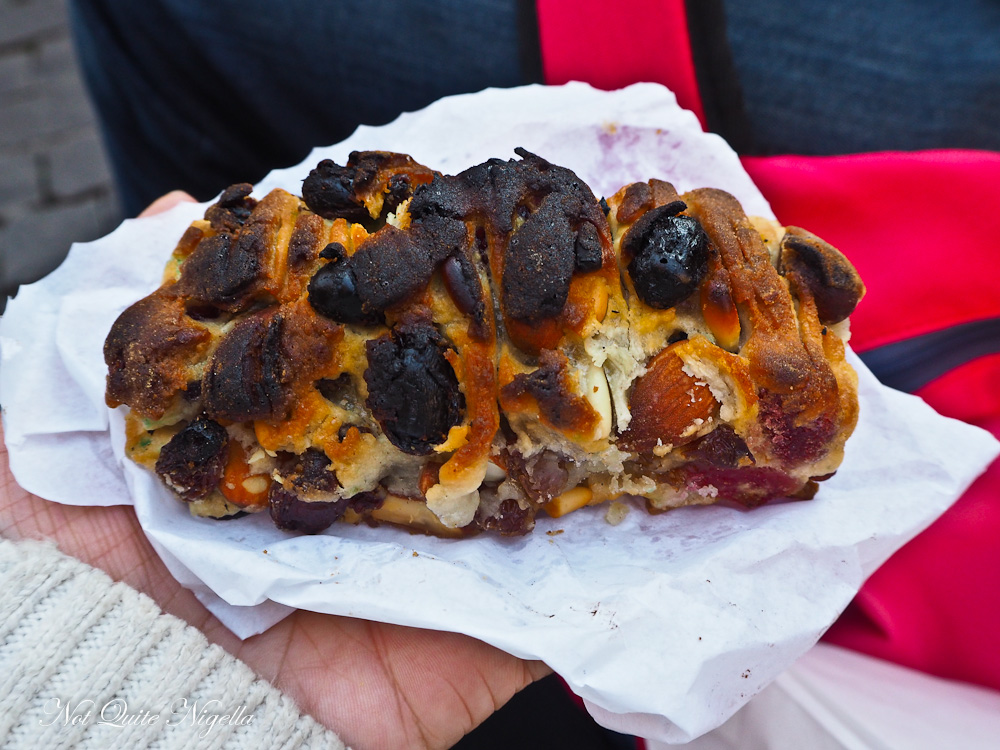 The Jewish pizza or Pizze de Berride is curious. Yes it looks burnt and yes it is burnt on the top but it's also a moist fruit cake chock full of raisins, glace cherries, whole almonds and pine nuts with a touch of cinnamon. The cake itself reminds me of a distant cousin of the Austrian stollen but with more fruit. Like stollen is has an almondy or marzipan sweetness to the cake. It is despite appearances, absolutely magnificent and bizarrely doesn't taste burnt. 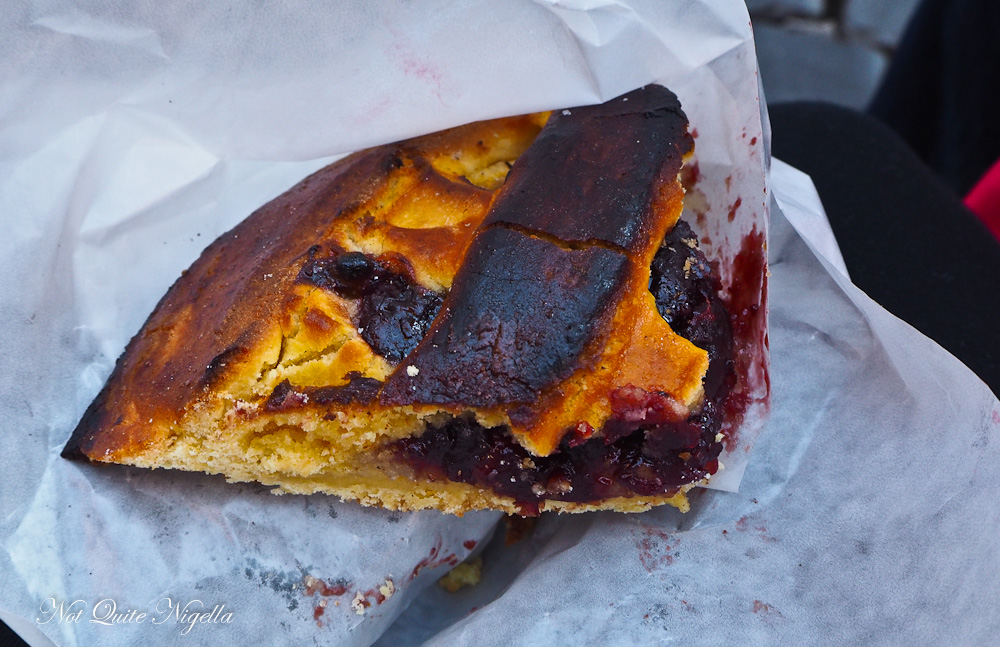 The jam crostata is another cake that perhaps fares slightly better in the looks but it's also delicious, another freshly baked cake that satisfies despite its rather burnt exterior. 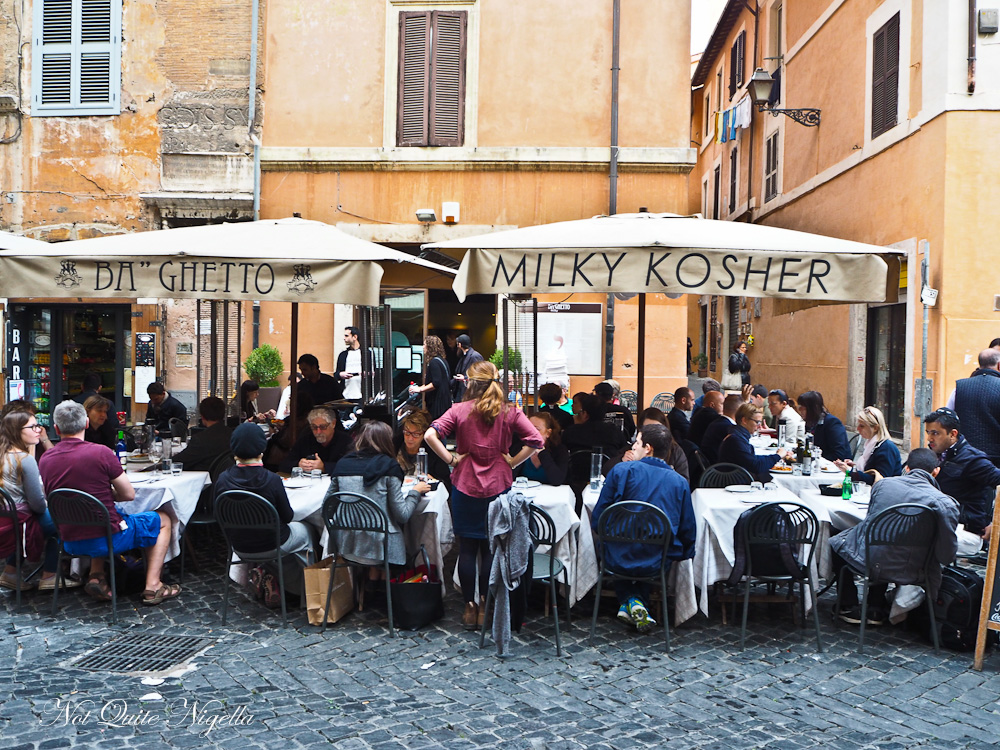 We stop for a quick snack at Ba'Ghetto where we take a seat outside. Service here is not the highlight and a waitress comes over to take another table's order. They aren't ready so she says "Ciao, see you in half an hour!". Tables are also restrictively close and uncomfortable but we are here for one of the highlights of Roman Jewish cuisine, artichokes Jewish style or "Carciofi alla Giudia". 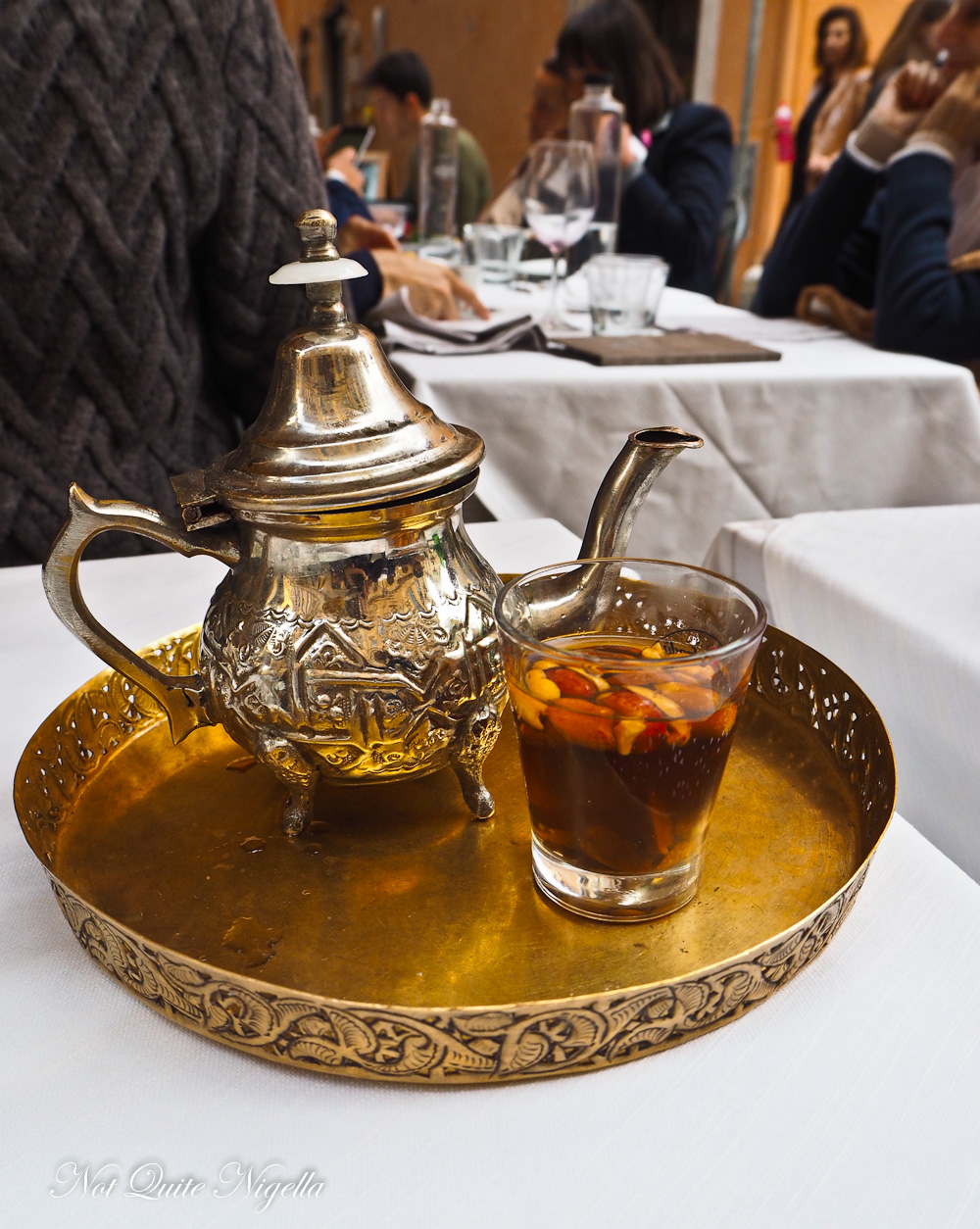 Mr NQN has come down with a cold so we order him a mint tea with nuts. A small cup of roasted nuts is served with the honey sweet tea. There isn't much mint in it but it is soothing sweet. 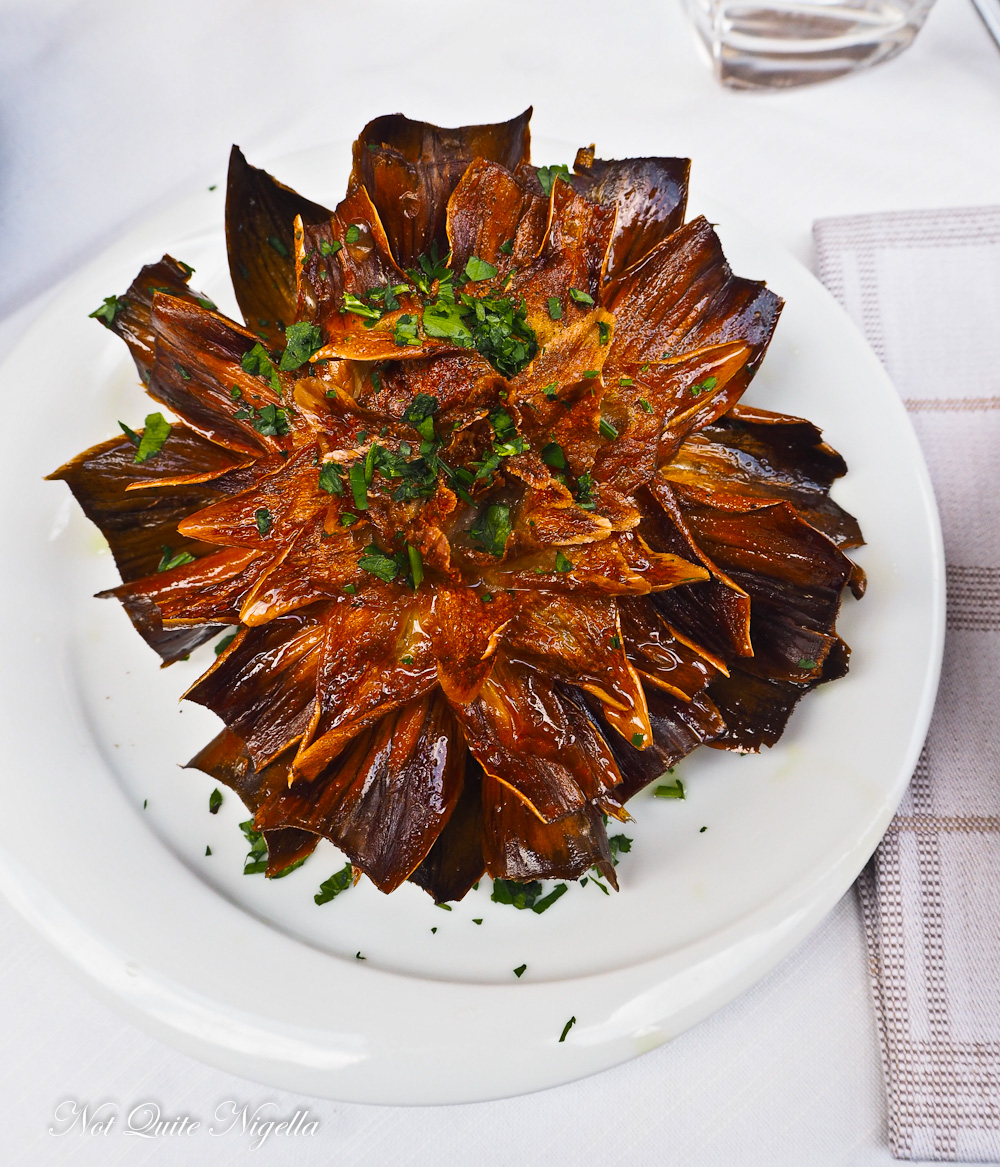 Out comes the prize dish, deep fried artichokes with their petals spread wide like a chrysanthemum flower. The artichokes are are cut into a spiral shape, the hard outer leaves removed and the whole bulb fried with the stalk pointing upwars. The leaves are crispy and fried while the heart inside remains tender and juicy. 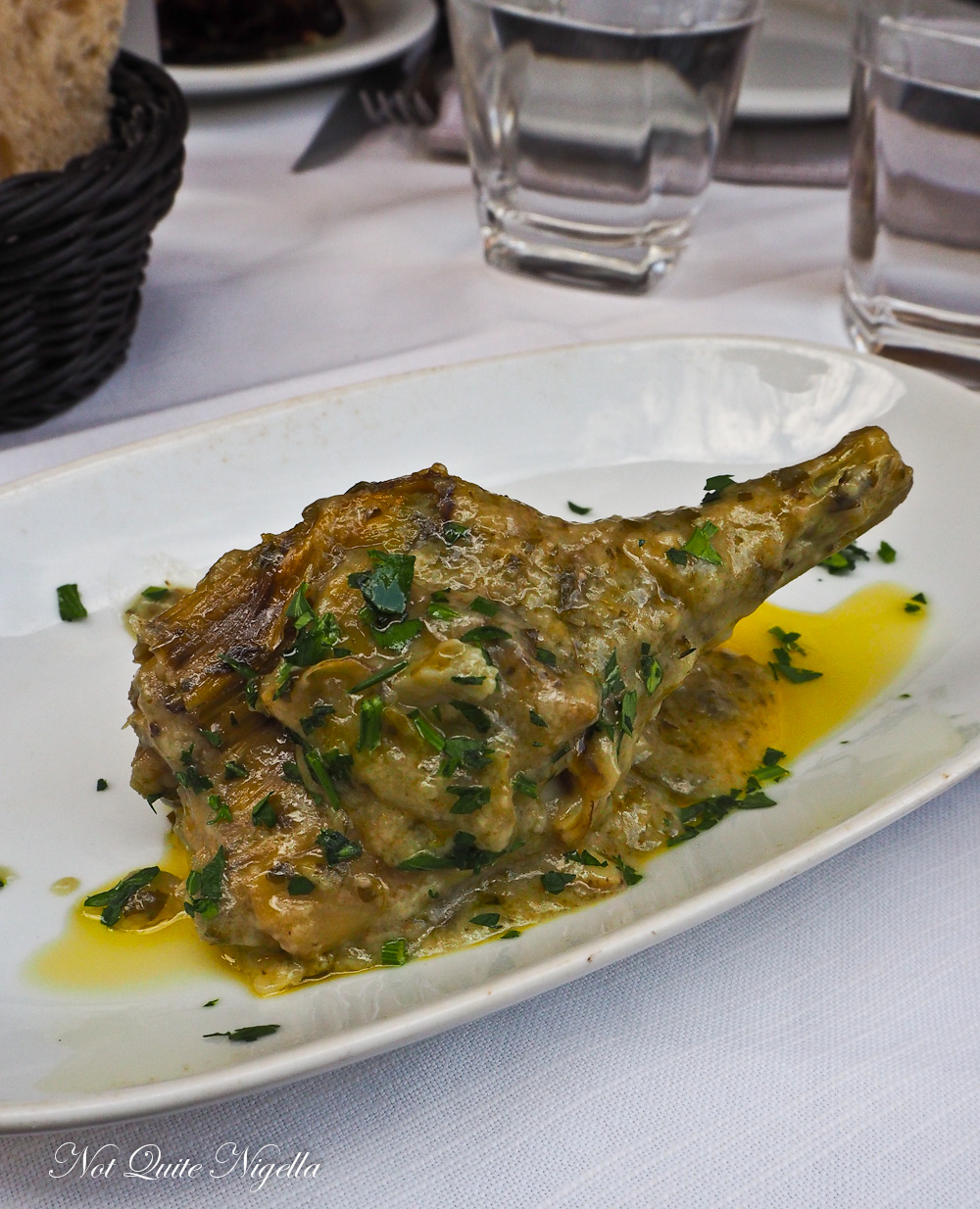 By contrast the Roman style artichokes are served closed up and are slow cooked and flavoured with garlic, parsley, mint, black pepper and lots of olive oil. These too are delicious although both are an entirely different proposition. 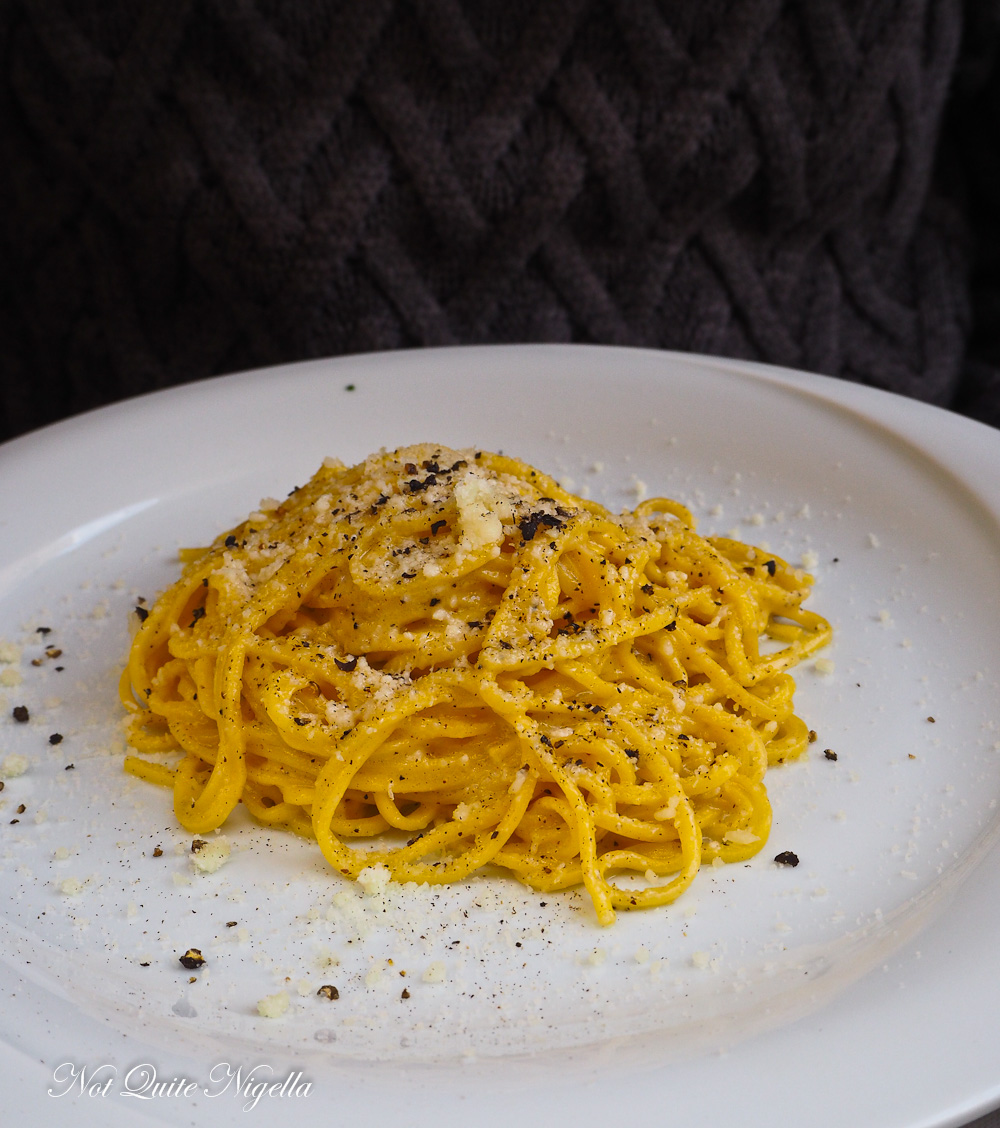 I know that a plate of pasta isn't exactly a snack but we just had to try one of Rome's most popular pasta dishes. In Rome there are four main styles of pasta sauces: cacio e pepe (or pecorino and black pepper), Gricia, Amatriciana and Carbonara. Cacio e pepe (recipe here) has three ingredients only: pasta, pecorino cheese and black pepper. There is no garlic, onion or cream added and it doesn't need it. This pasta is perfection in its simplicity. It is perfectly cooked al dente tonnarelli (similar to a spaghetti but extruded in a square shape instead of round). Pecorino is favoured over parmigiano reggiano in Rome due to a history with centuries old sheep farming. 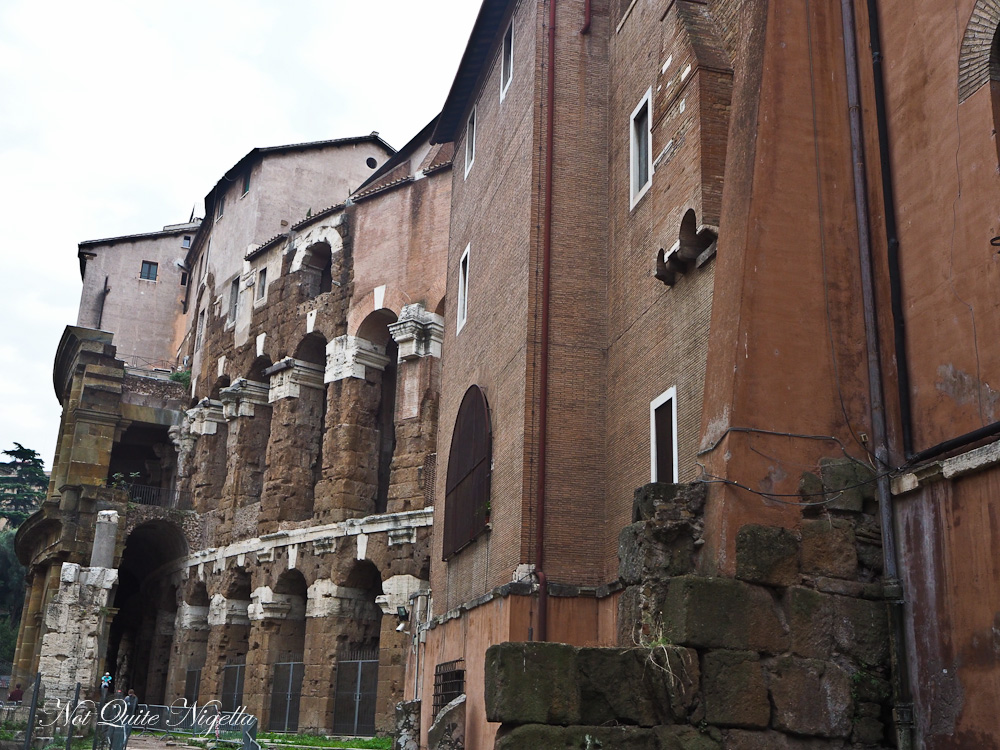 We take a walk around the area trying to work off some of the pasta that we've scoffed greedily. There are ruins of the Portico D'ottavia, built in 146BC by Augustus for his sister Octavia Minor. We stroll across the River Tiber, coloured green where stray dogs and ducks call home. We pass the Museo Ebraico or Jewish museum before we end up back at Via del Portico d'Ottavia. 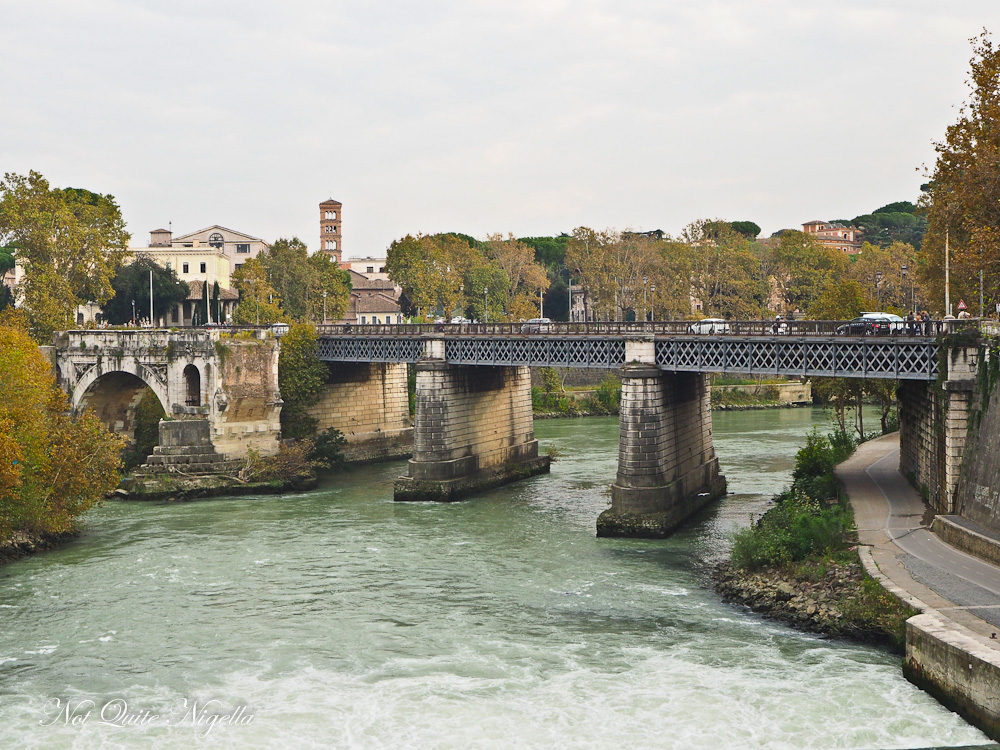 It's time for a gelato so we stop at Cremeria Romana Gelato Kosher. I buy a triple scoop with Fior de Latte, pistachio and biscotti. All three flavours are excellent especially the pistachio and the biscotti which although it is entirely smooth tastes just like a biscotti! 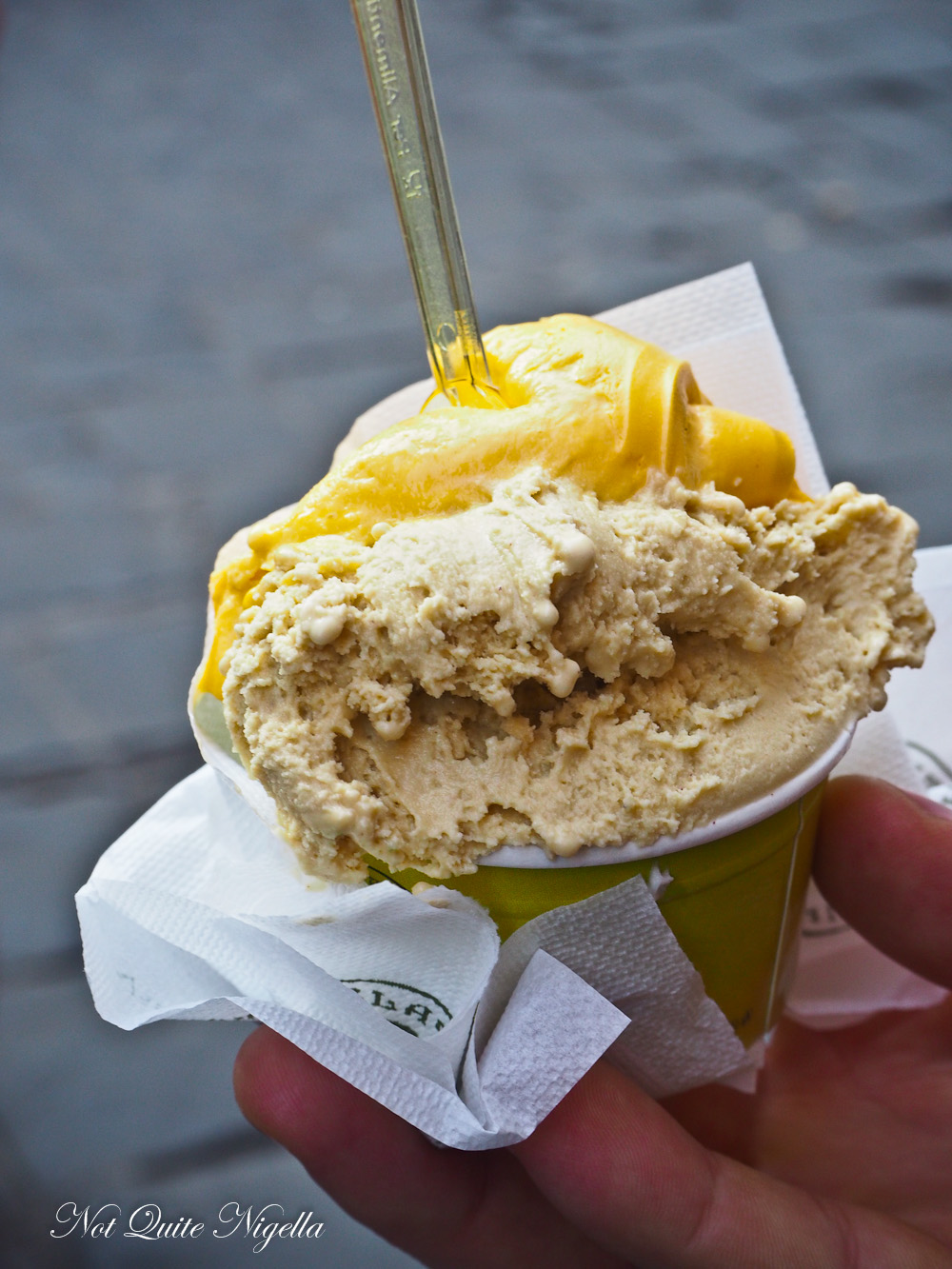 I duck into a tiny sliver of a shop Il Mondo di Laura, Biscottificio where there is a wonderful selection of biscuits, all parve (free of meat or dairy) in an original range of flavours. Prices are amazing, just €2 for a packet of 4 or 5 freshly baked and fantastic cookies and I buy myself four packets. 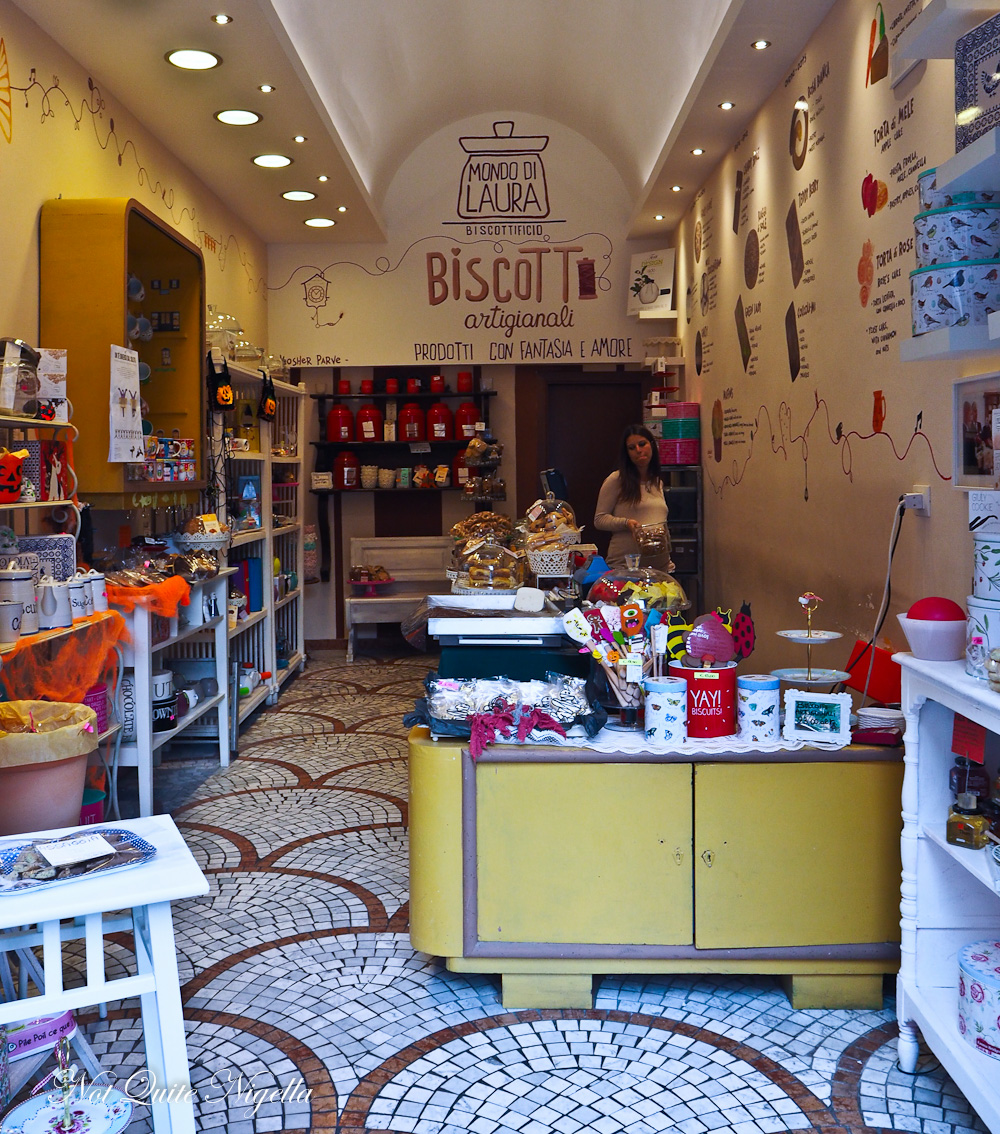 The Candy Spice is particularly good and other best sellers are the Green Lady with wholemeal flour, honey and pistachios and the chocolate orange "Ghilty" and the Pepita with dark chocolate and sea salt. 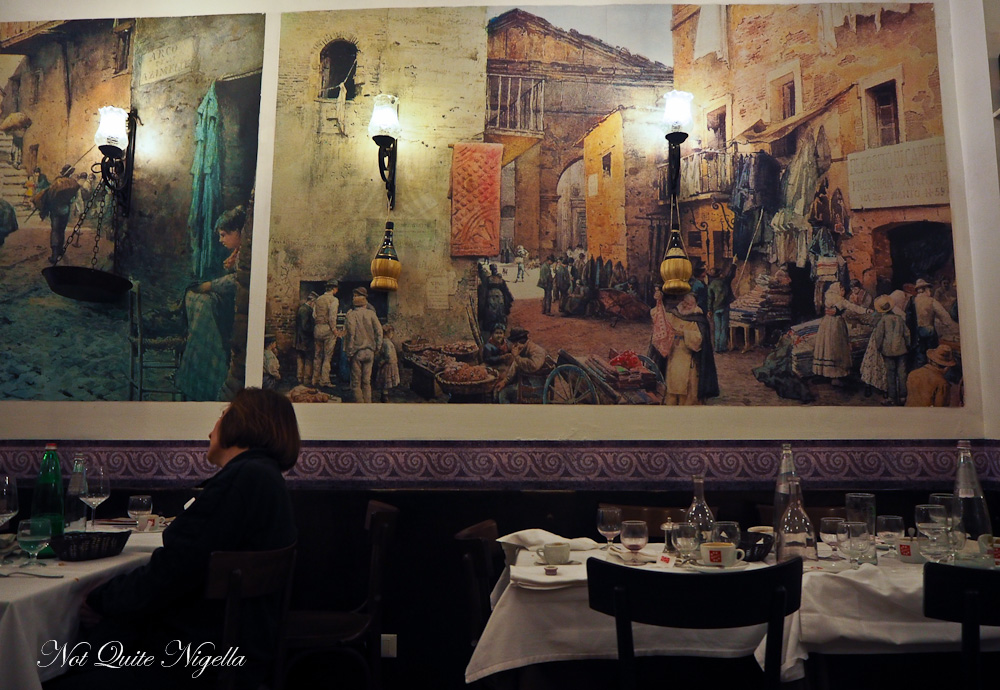 Finally we arrive at our last stop for the day. Nonna Betta is an institution in the Jewish quarter. Nonna means grandma and Betta is the name of owner Umberto's grandmother. He is very welcoming and we are offered a seat inside. On both walls are colourful drawings of what the ghetto life was like. We watch as a man brings in tray after tray of fresh artichokes. While there is a separate menu for fish and meat and there is no pork, they do mix meat and dairy. 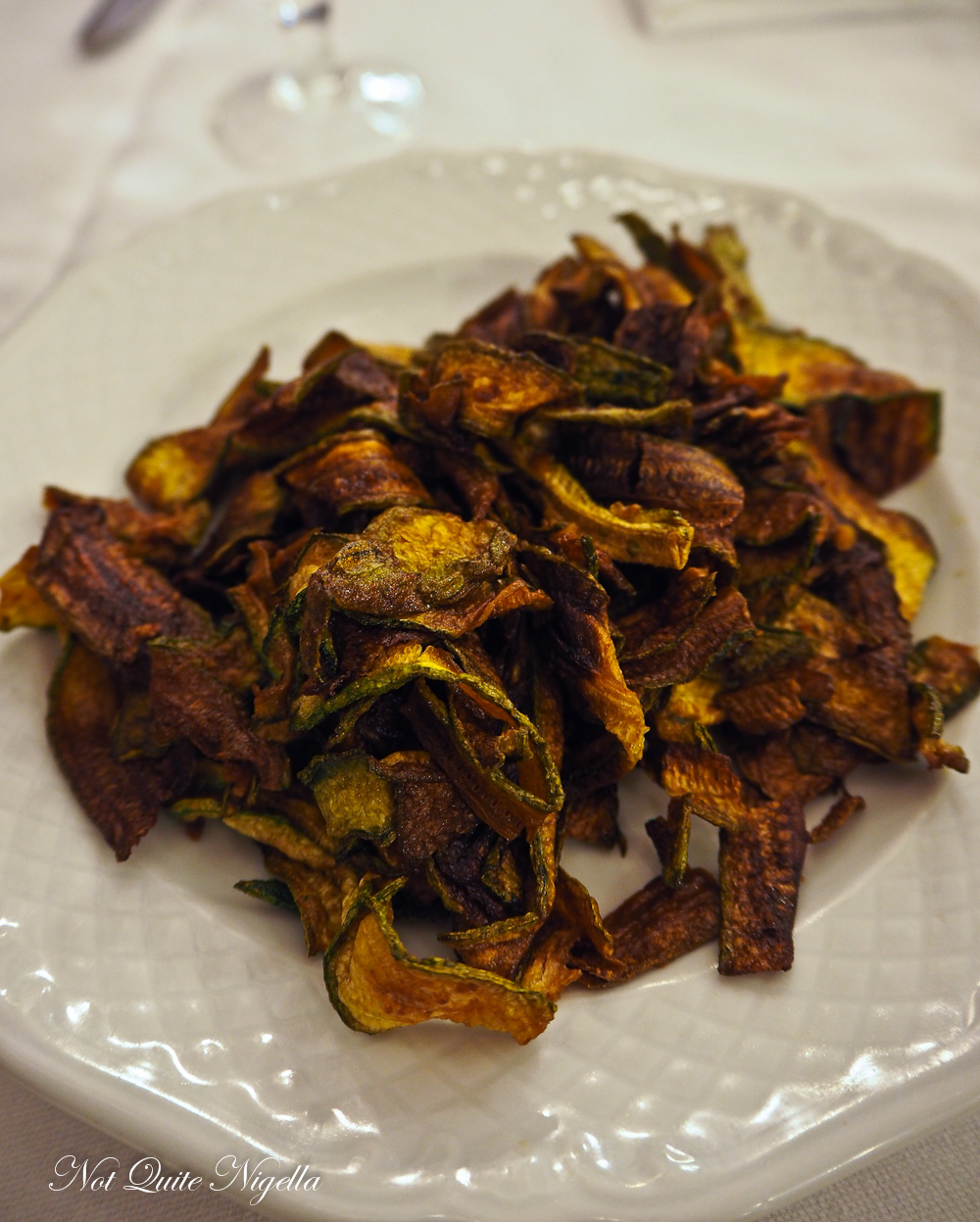 The conchia or concha is marinated Jewish style zucchini. The zucchini is peeled thinly and deep fried and served cold after standing for a couple of hours. The result is a salty snack ideal for eating with a drink. 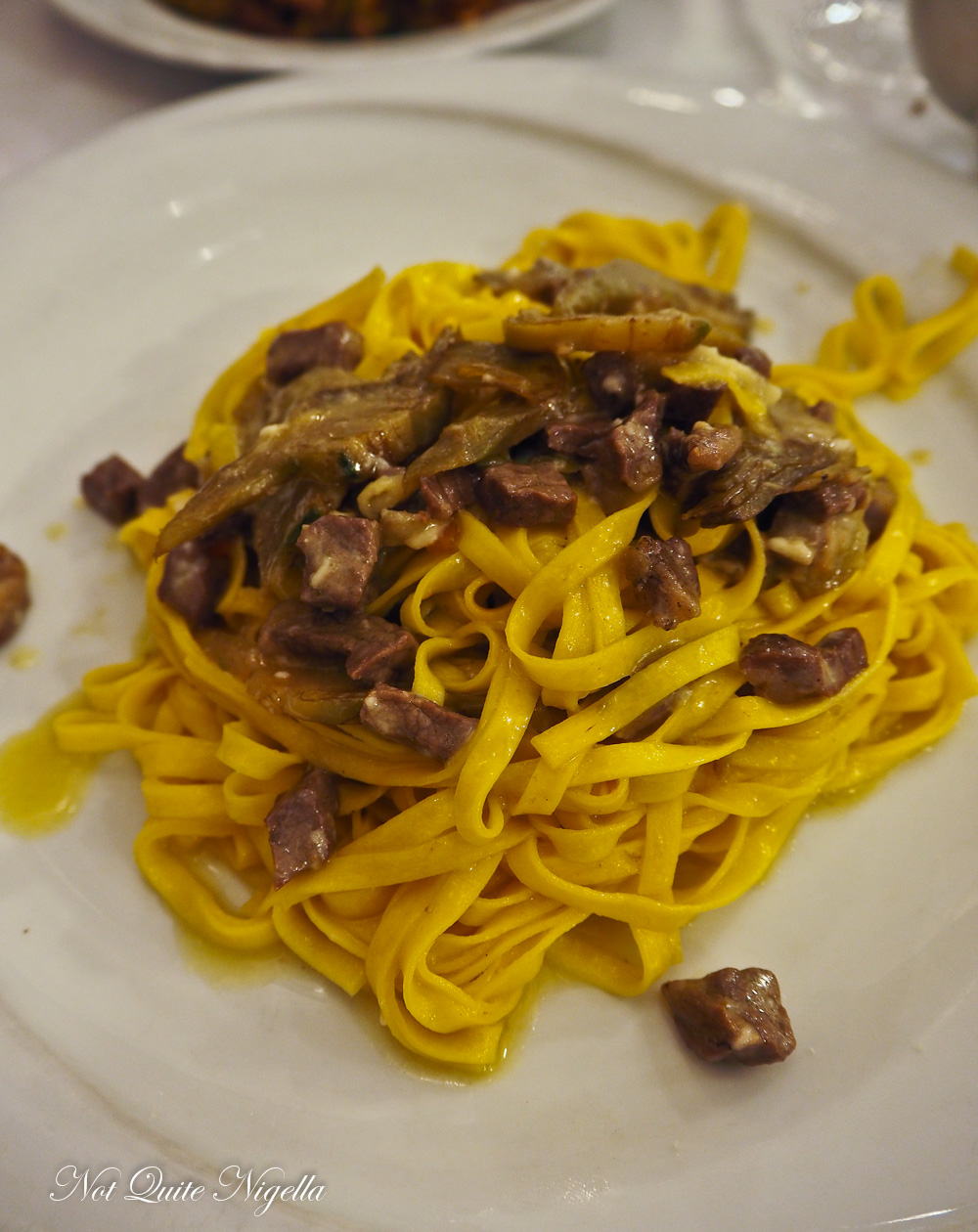 We asked what was a traditional Roman Jewish dish and we were directed to the Gricia alla Guidia made with silky tagliatelle noodles and artichokes as well as seasoned beef pieces. It's cheesy and again there are only three ingredients to a Gricia dish-pasta, guanciale or pork jowl meat (or in this case beef) and pecorino Romano. It's satisfyingly good and we both revel in our respective plates of pasta before fishing across the table with our forks for a taste of each other's dish, the prerogative of the familiar. 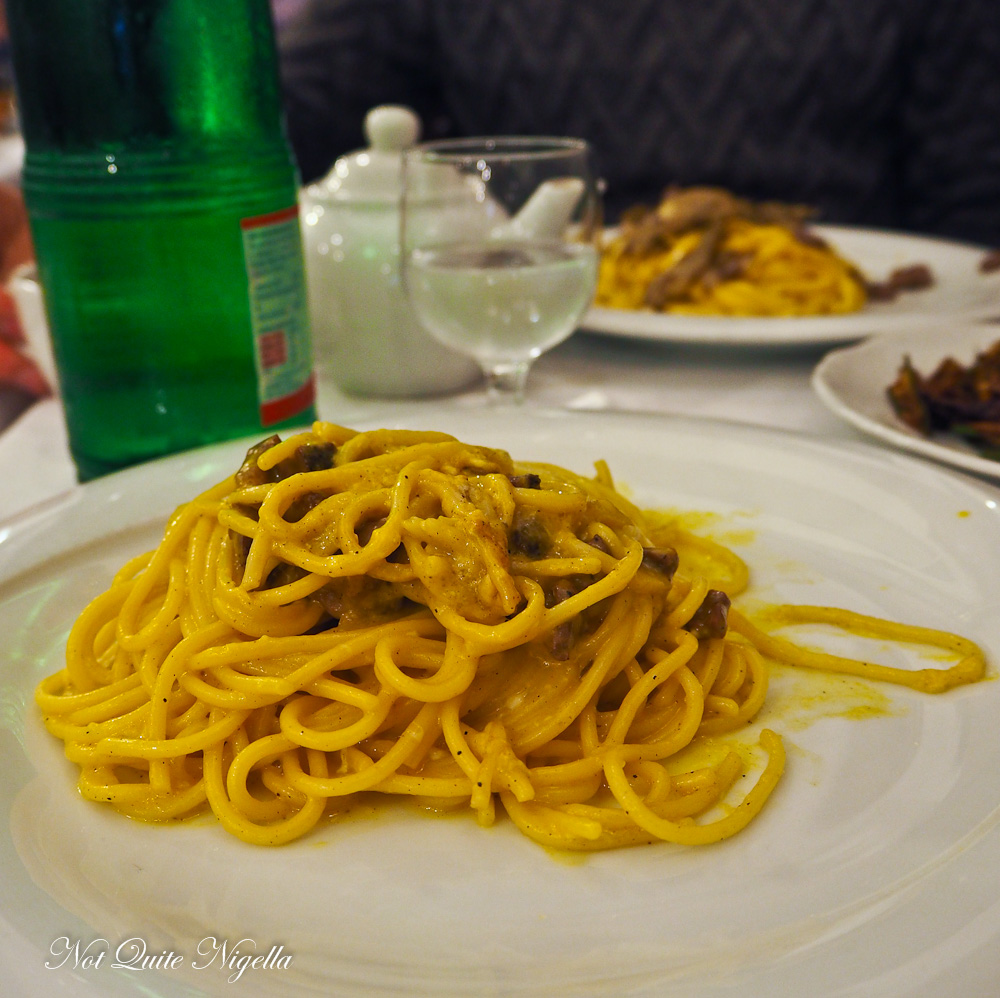 Carbonara is similar to pasta alla Gricia and here again has the seasoned beef pieces instead of the guanciale but this has eggs added to it which makes it that much richer and that much more indulgent. And the beef makes a good substitute in flavour for the bacon although perhaps not in texture for the guanciale. 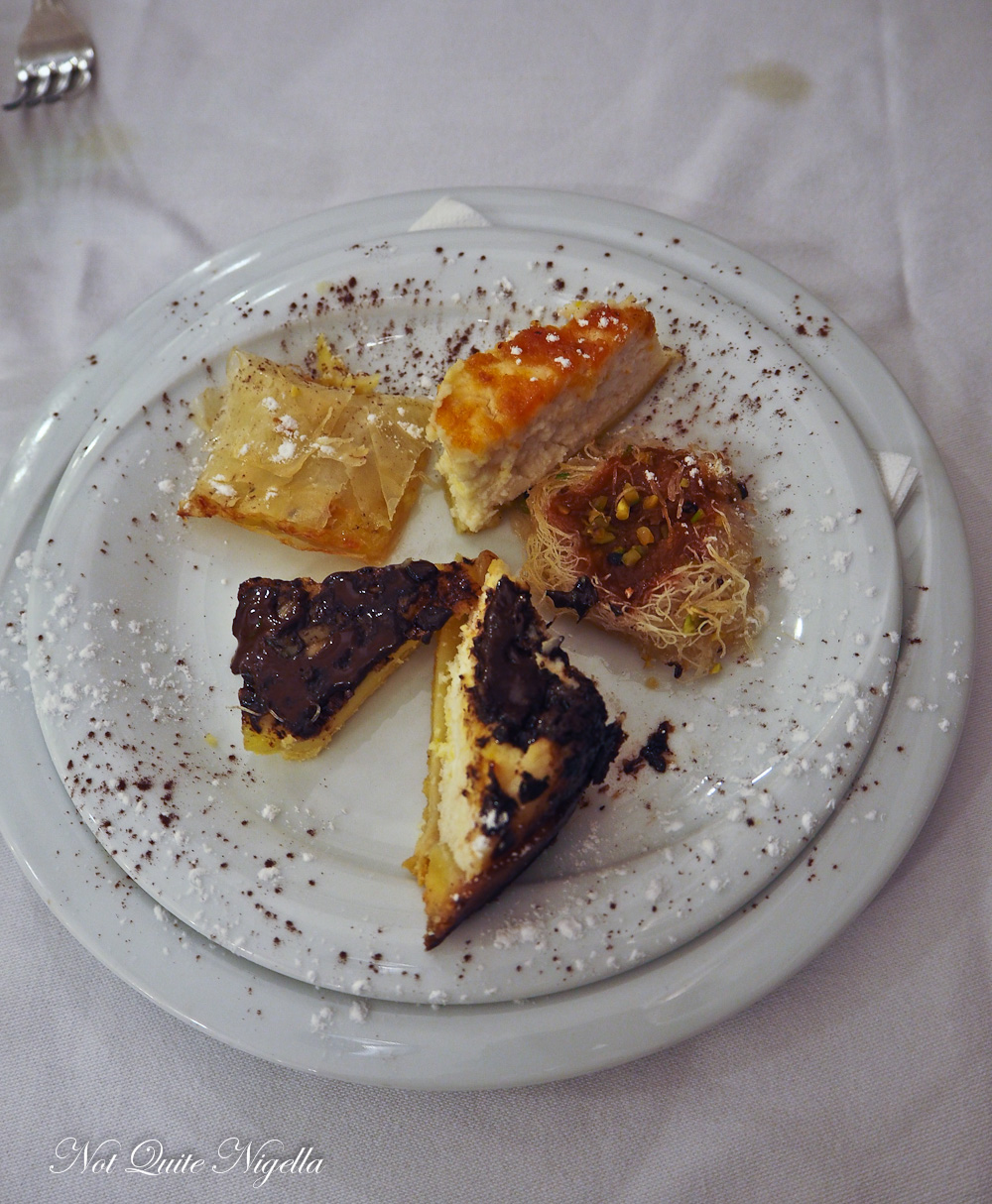 On my way to using the facilities, I did a slow walk by of the pastry cabinet and gnashed my teeth because I saw so many things that I wanted to try including a good range of Middle Eastern sweets (there are also savouries). But then when we saw the degustazione dolce I knew that would suit us perfectly. There are five small pieces of cake on the plate and they're all fantastic from the soft and fresh chocolate topped ricotta cheesecake to the flaky layered baklava pastry. 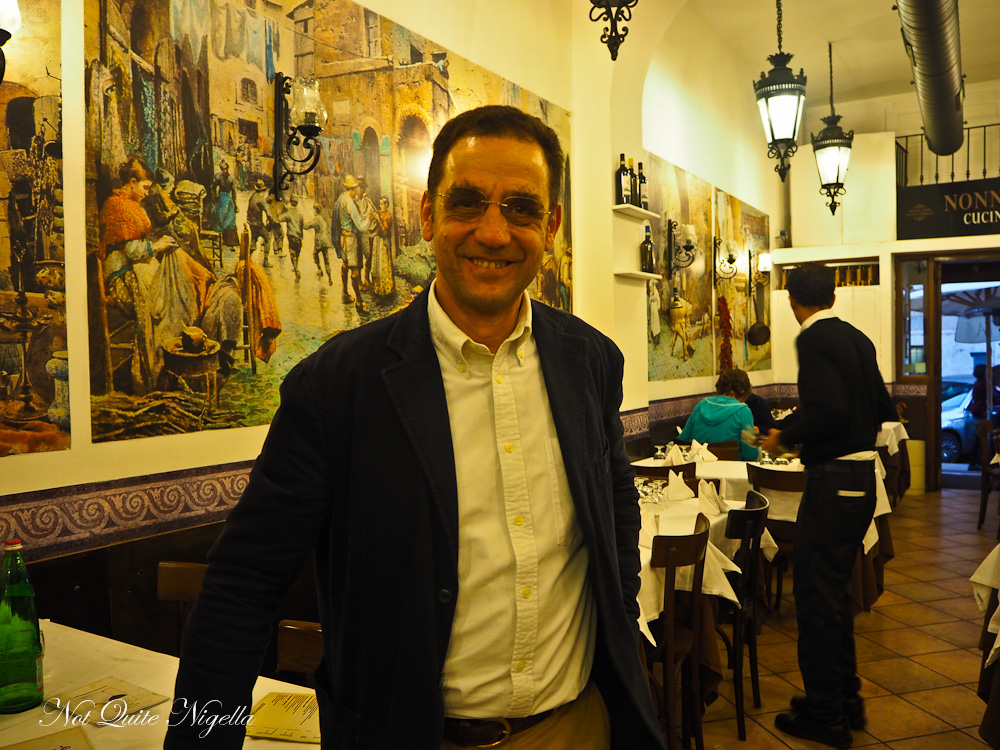 As we pay, Umberto offers us a bookmark and we ask him about the paintings on the wall. He tells us that they are the only surviving part of the old Jewish ghetto. The street Via della Reginella has an eclectic collection of shops from a book store and boutiques and ends at the Fountain of Turtles or Fontana delle Tartarughe in Piazza Mattei. 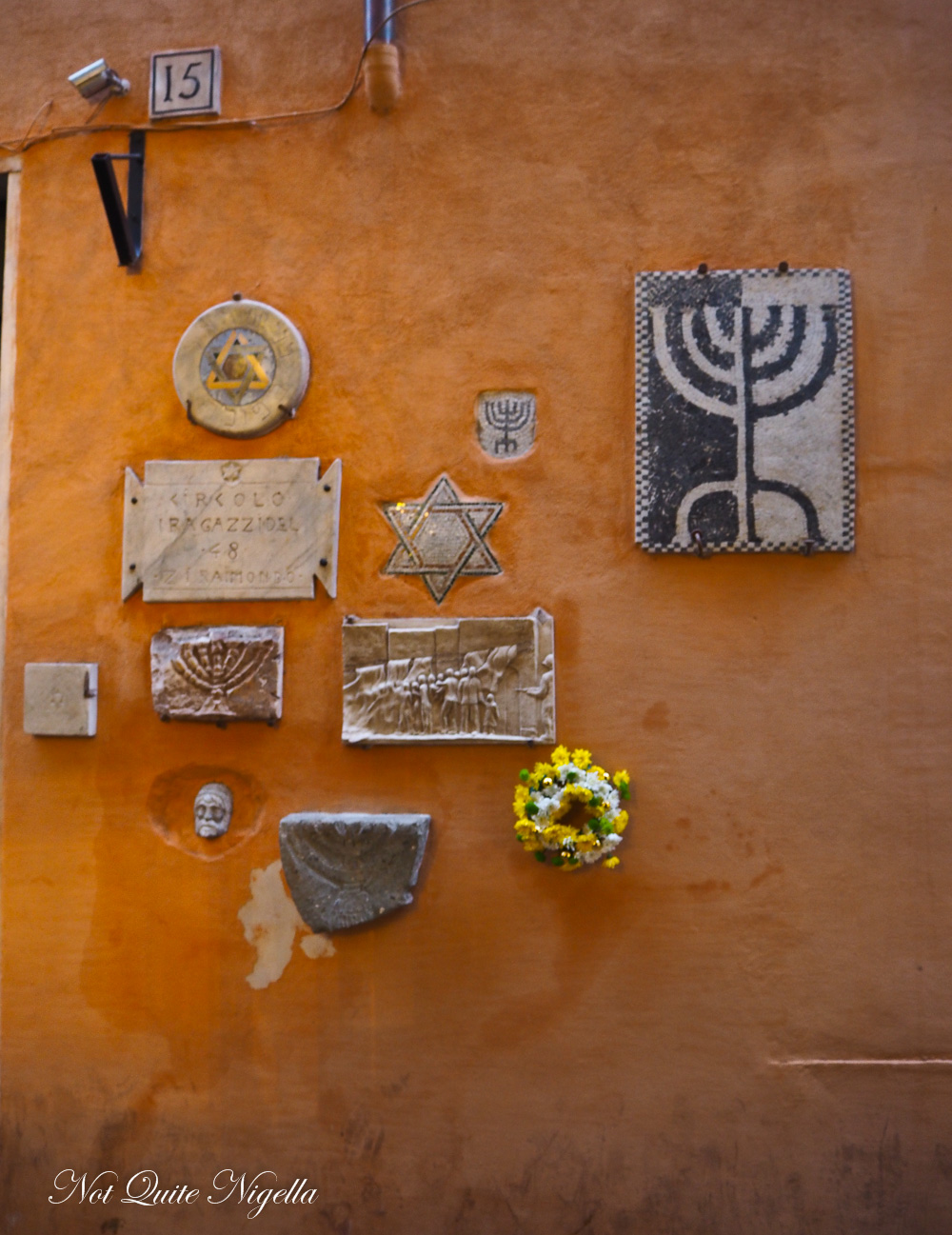 The fountain was actually built for Muzio Mattei, a Roman Catholic from the House of Mattei, a prominent family of bankers and politicians who lived in the area. Unlike the Jewish population who lived in the ghetto he was given a key in which he could come and go as he pleased. A luxury not afforded to the rest of the inhabitants. 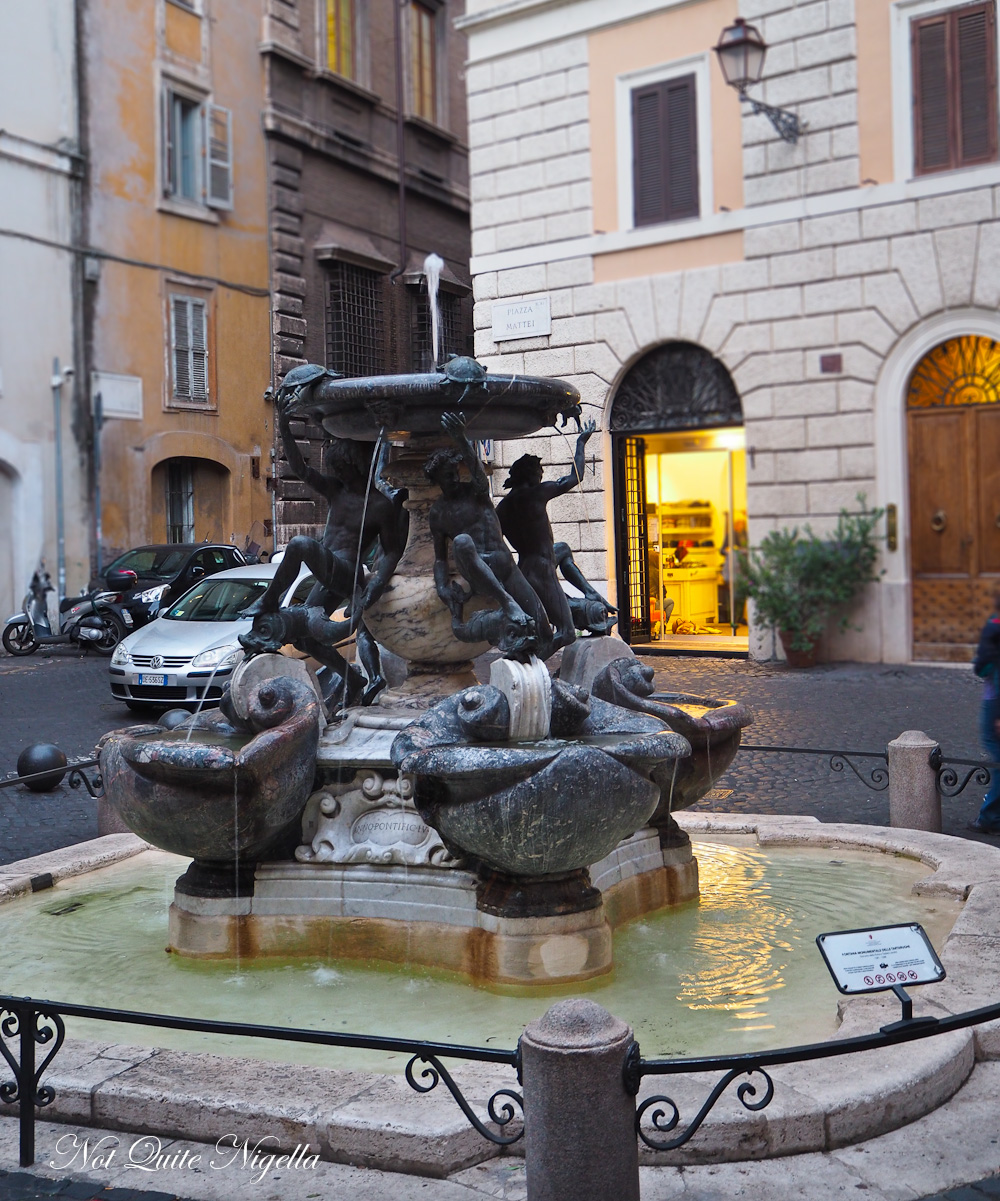 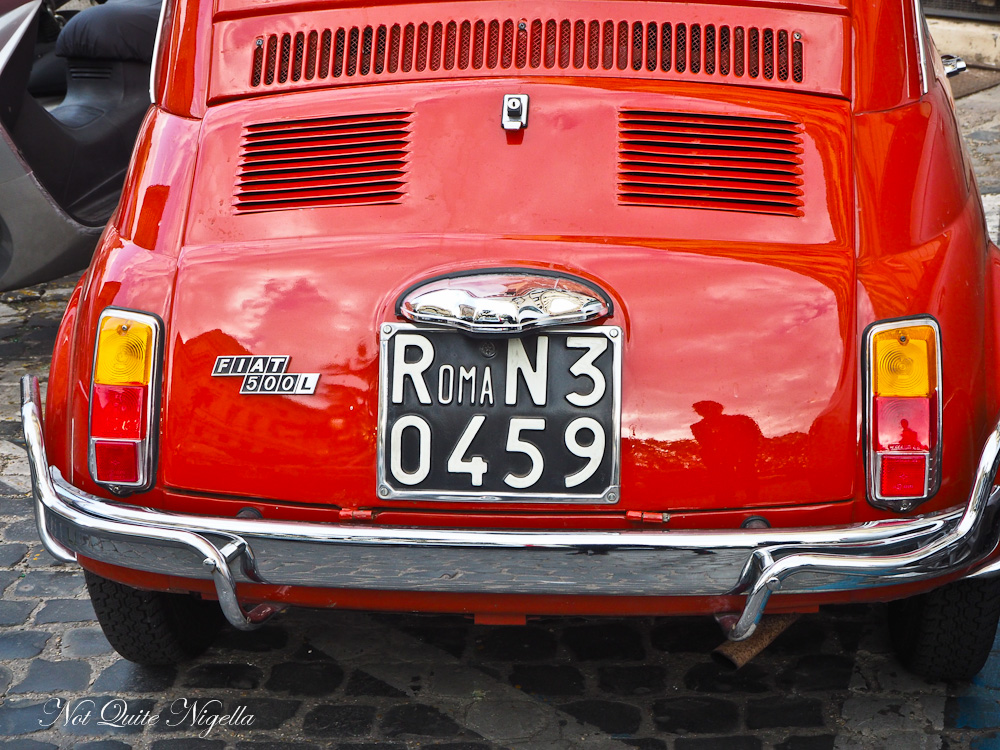 travelLove Truffles? The Best Time For Truffle Lovers in Rome
travelThere's No Place like Rome: Testaccio
travelHome sweet Rome & Exploring Modern Italian Cuisine
travelWhen In Rome: Visiting The Monti Neighbourhood
travelFood Of The Gods: All About Culatello
travelThe King of Cheese: Parmigiano-Reggiano
travelBehind the Stars: The Michelin Awards, Italy
travelFeasting On The Delights Of Florence, Italy
travel9 Amazing Eats & Things To Do in Modena, Italy!
travelThe Culinary Wonders of The Bolognese