The Culinary Wonders of The Bolognese 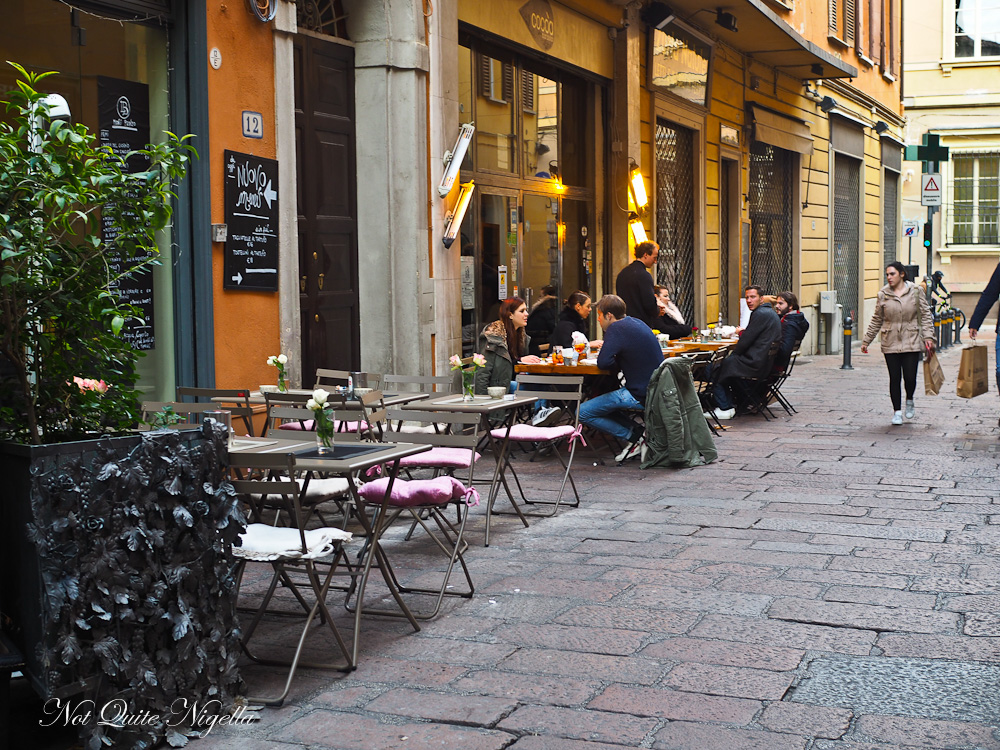 The city of Bologna is known for a few different things: fast cars, the oldest university in Europe as well as more familiar delights of bolognese, tortellini, lasagne and mortadella. Come along as I explore the delights of the Emilia Romagna region in Northern Italy! 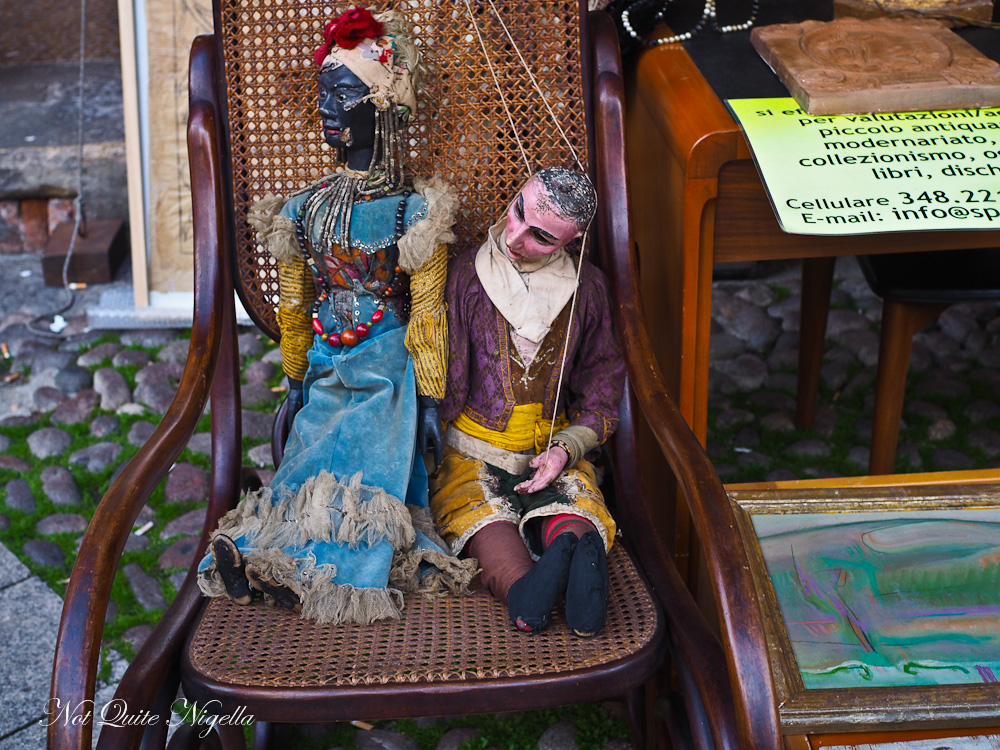 In Medieval times, Bologna was a prosperous town and considered a good place to live-indeed the name Bologna is based on the Roman word "Bononia" which means good place for life. It offered people fertile soil, good food and an ideal location for trading. 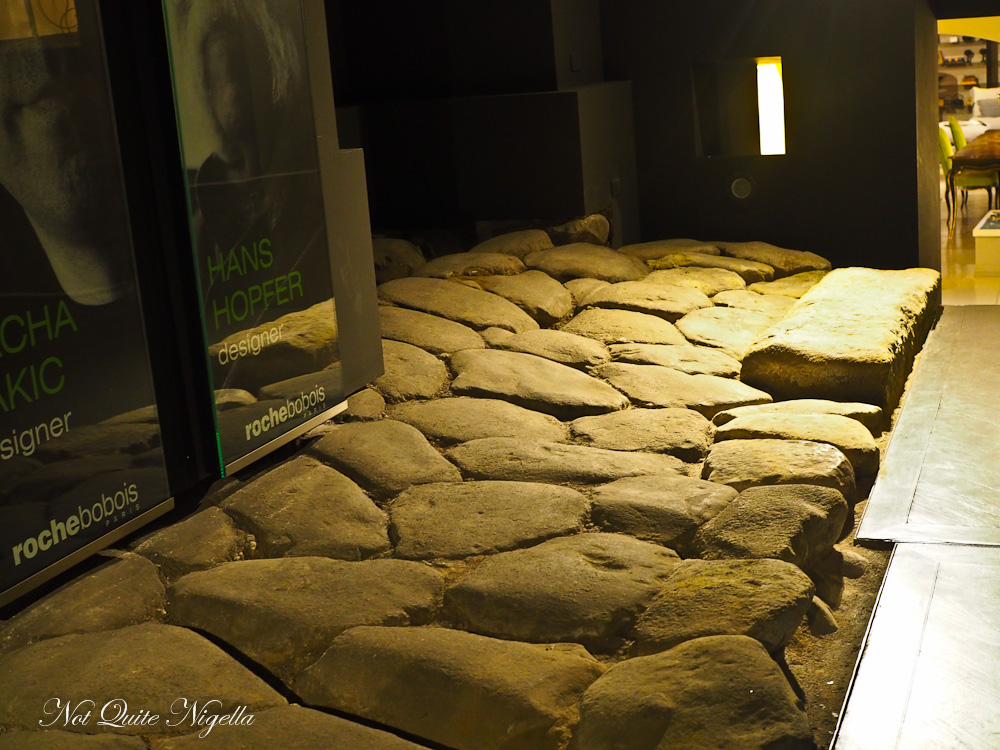 We stand on Via Rizzoli originally called Emilia Road or Via Emilia and this was an important trading road that linked Rimini at the Adriatic coast and the ancient road founded by the Etruscans. The original road still remains metres under the modern day road and you need only step into a shop like Roche Bobois and go down one level to see the original Roman road. Bologna blossomed around the birth of the university. 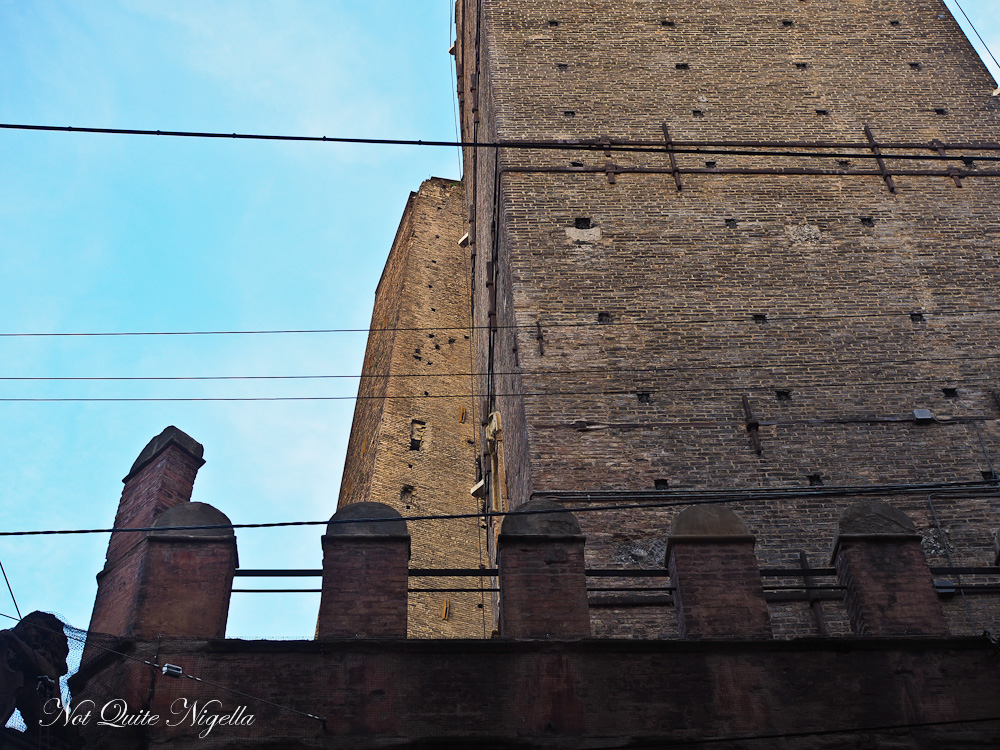 Just nearby are the famous two leaning towers that lean towards opposite sides. You can climb them to the top but with the medieval steps it's not an easy trip up (or down). The tallest one measures 97 metres and leans 3 metres to the side. 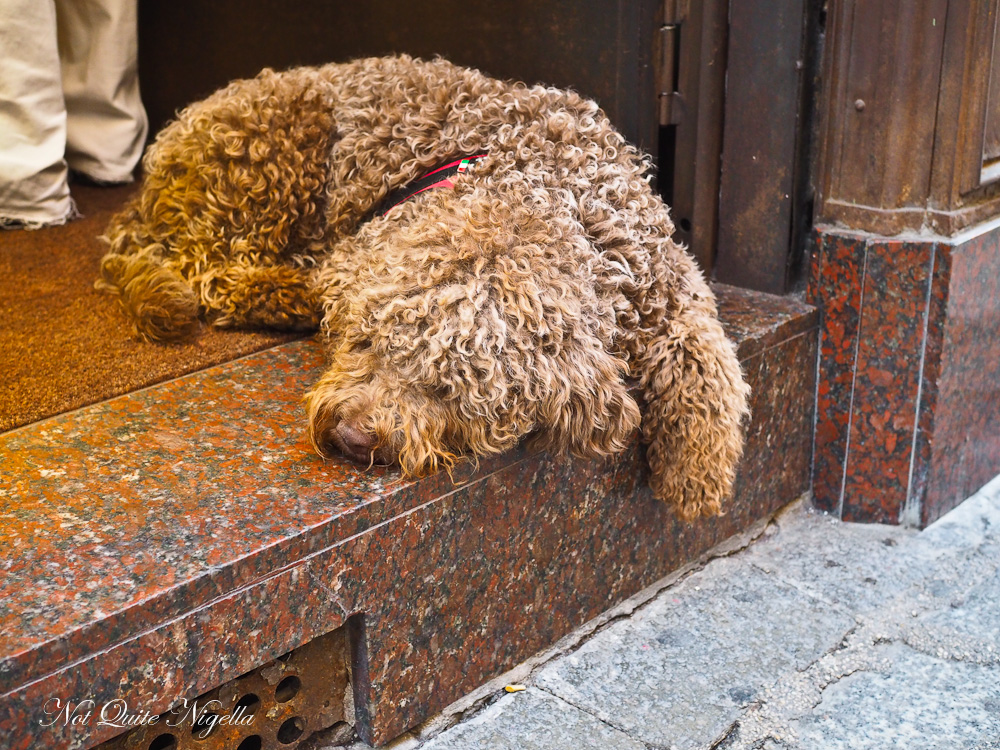 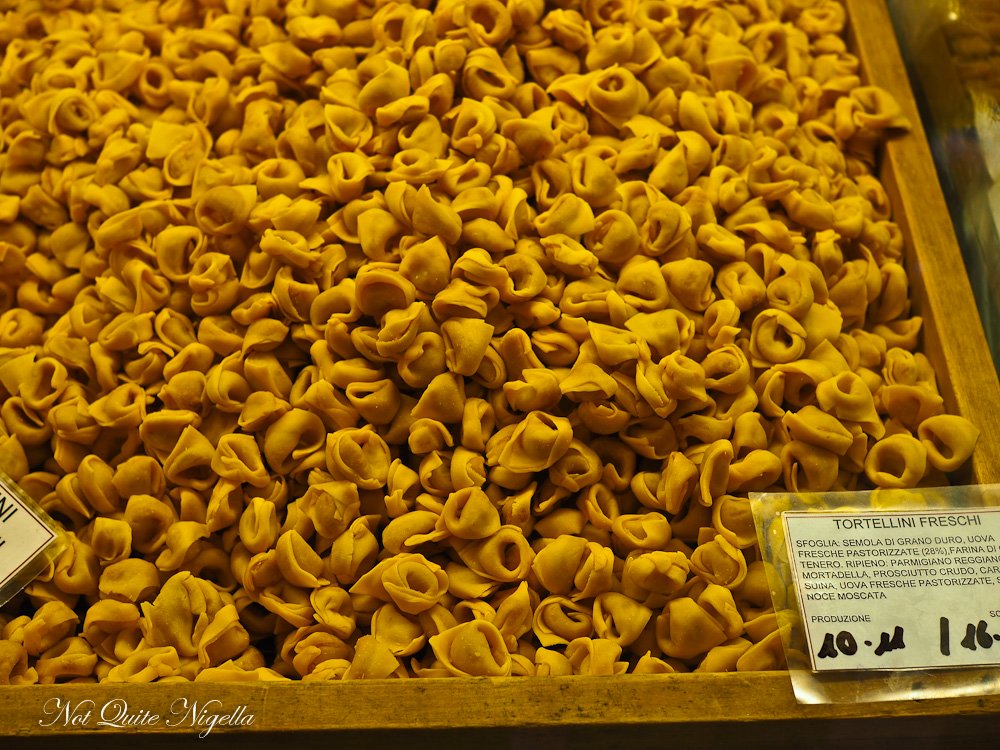 Tortellini is just one of the many gustatory wonders of Bologna. Tortellini, stuffed with a mix of mortadella, veal, ham and reggiano cheese are the tiny cousins of the other Bolognese specialty Tortelloni, a larger filled pasta that is filled with ricotta and parmesan and served with butter (not browned), sage and parmesan. Tortellini is traditionally served al brodo or with a broth. 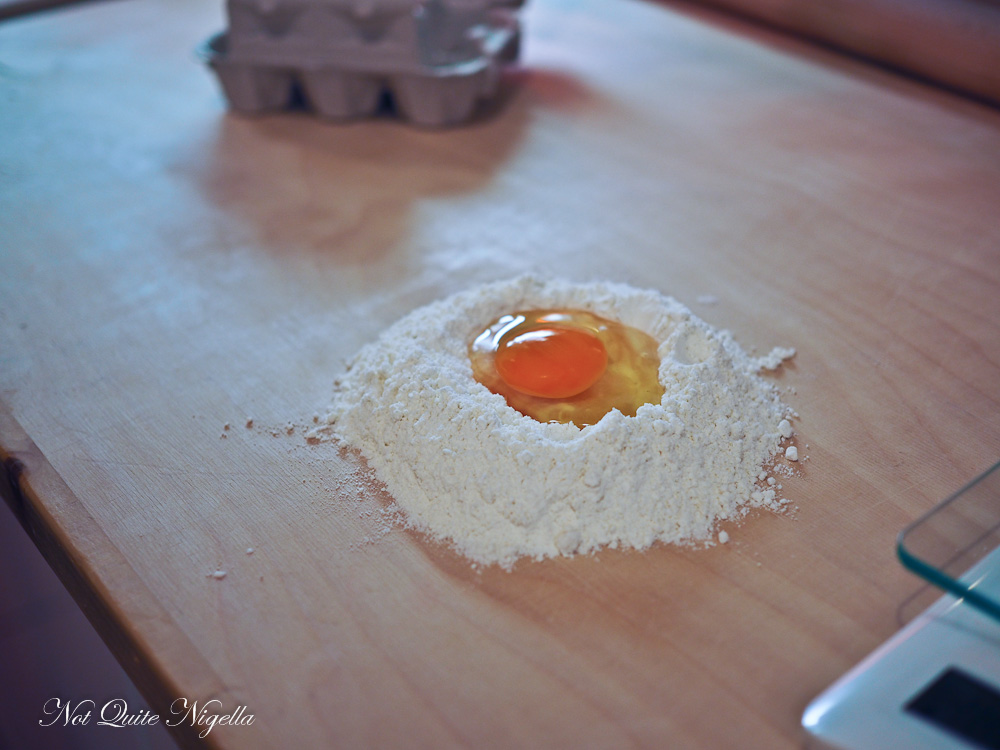 And at Bologna Cucina Cooking School chef Davide Berchiatti teaches people how to make a classic and authentic tagliatelle bolognese (never spaghetti-a Bolognese person would show you to the door!) and tortellini al brodo as well as an easy but delicious tiramisu. 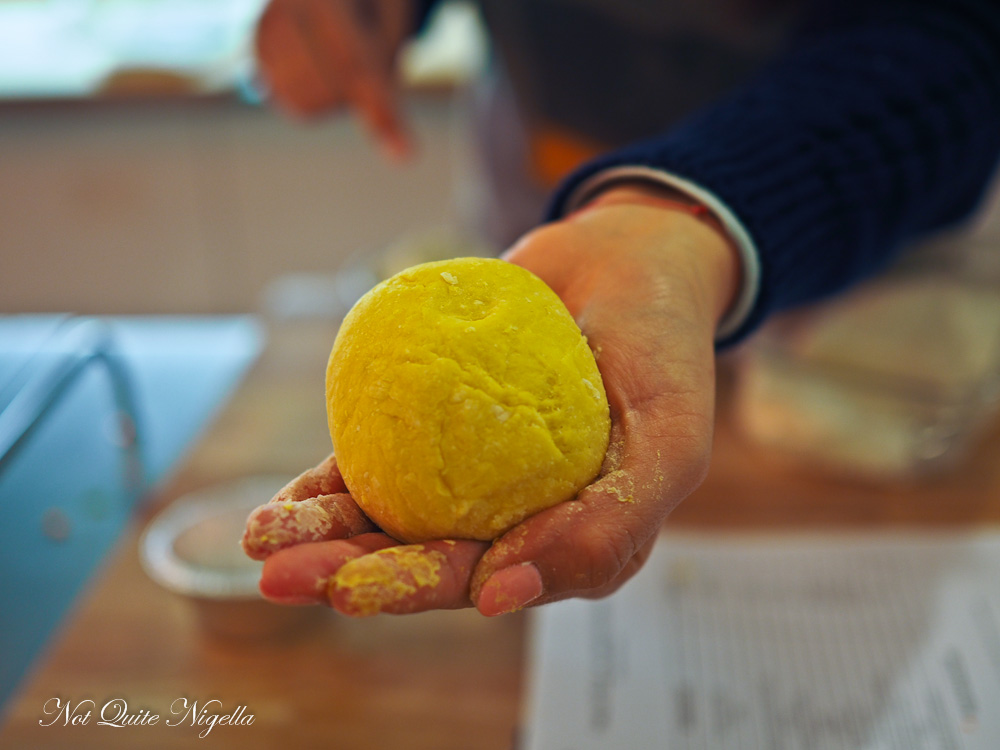 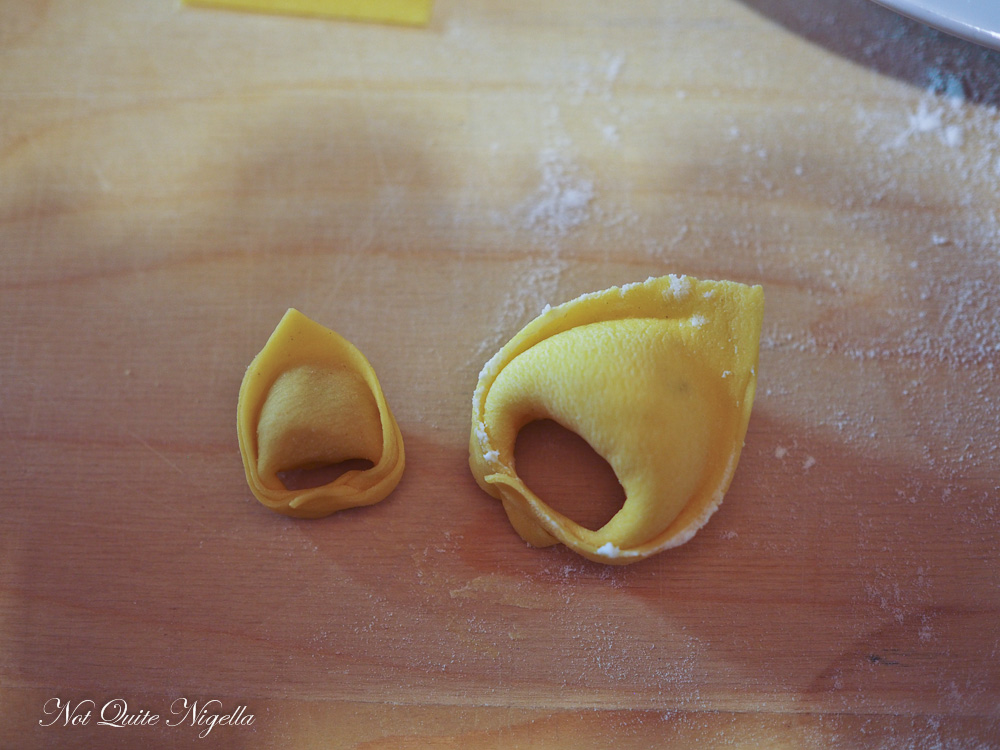 The quantity for pasta is simple and each region of Italy does it differently according to climate and prosperity. The fertile regions of the north use 100g/3.5ozs. of flour to 1 egg (and no salt). 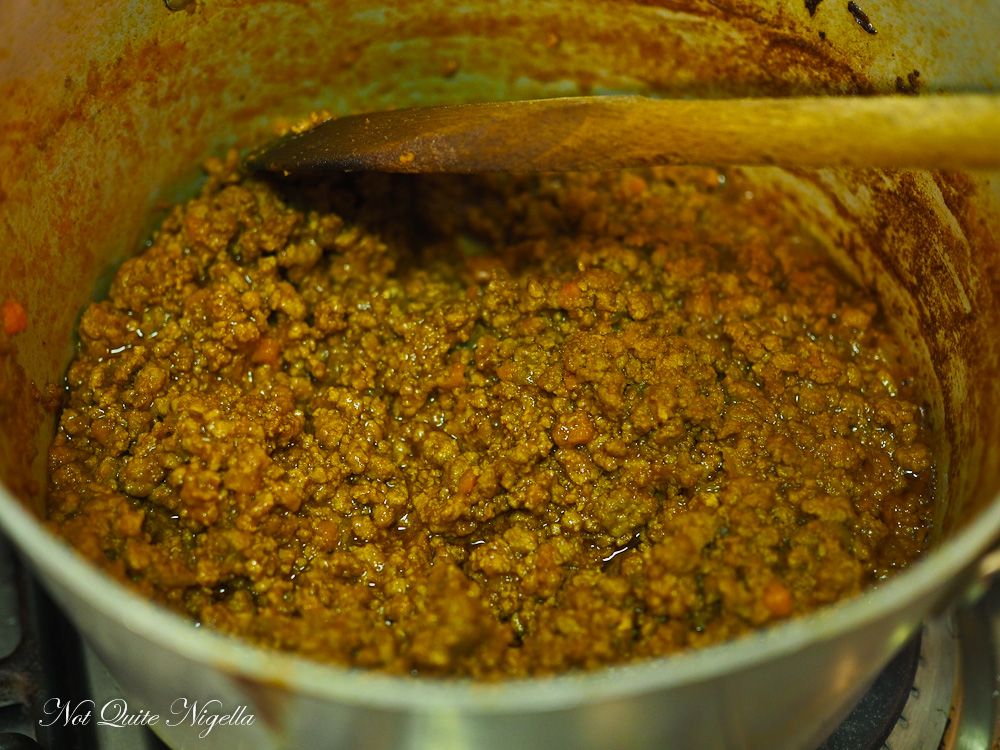 To make a ragu, you need time. Four hours should do on a low simmer and you start with a soffritto and then add veal and pork mince, red wine and once this has absorbed passata and a chicken, beef, celery and carrot broth. 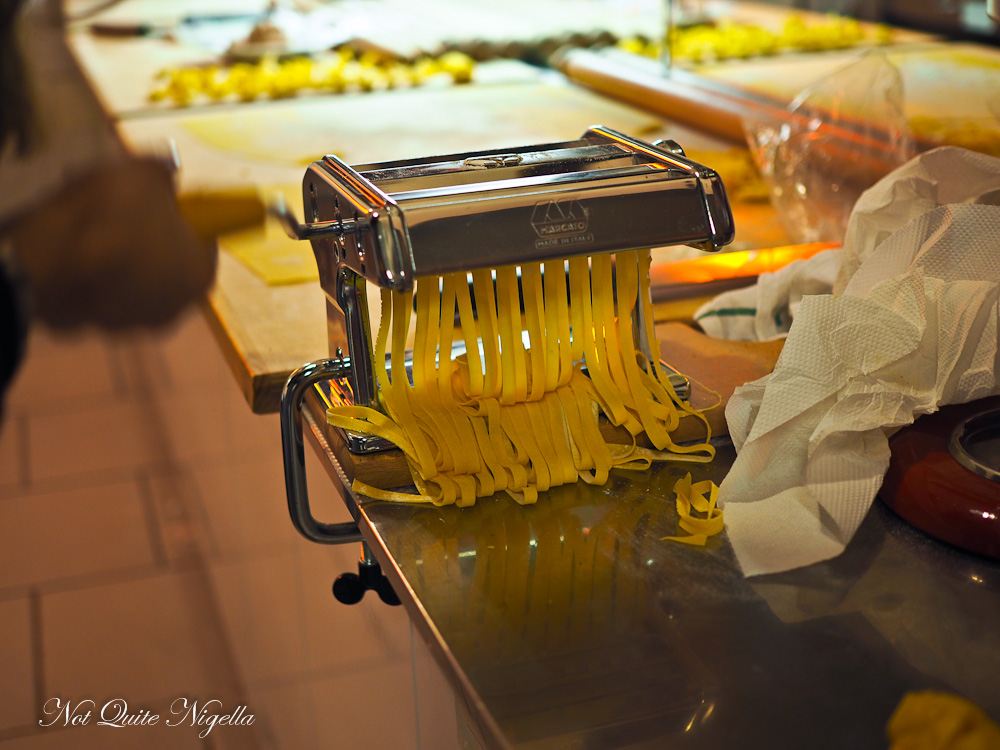 Tagliatelle, not spaghetti for your bolognese sauce

It doesn't appear bright red and tomato stained, rather a deep brown colour. The broth can also be used for the tortellini in brodo. The tagliatelle bolgnese is so good that I make immediate plans to recreate it on the blog using Davide's recipe (stay tuned!). 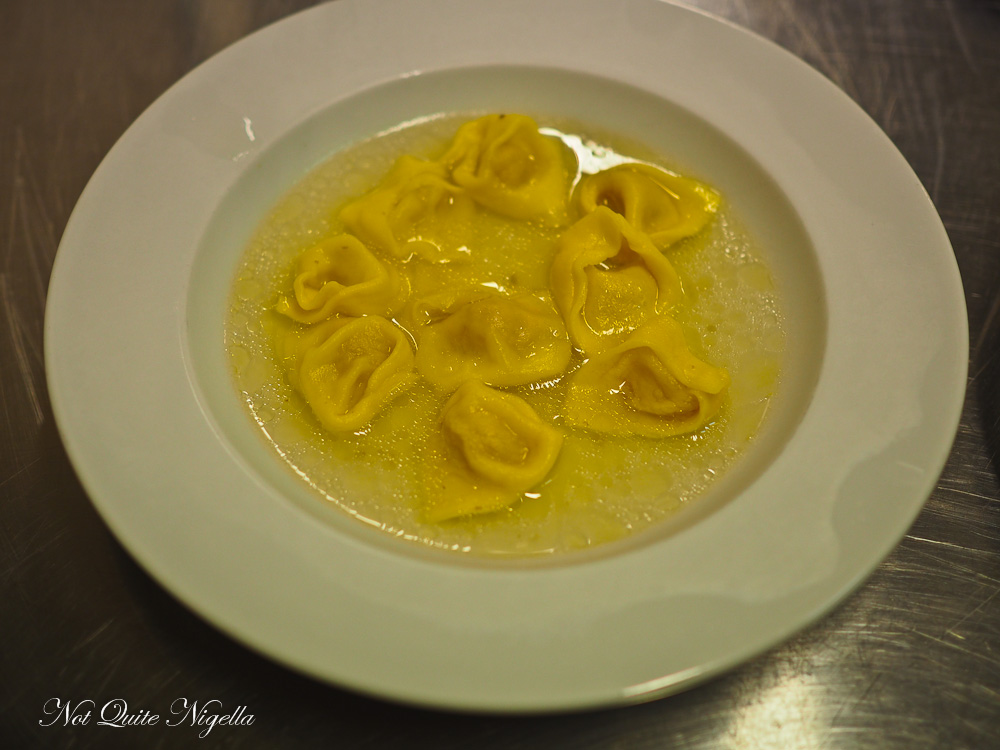 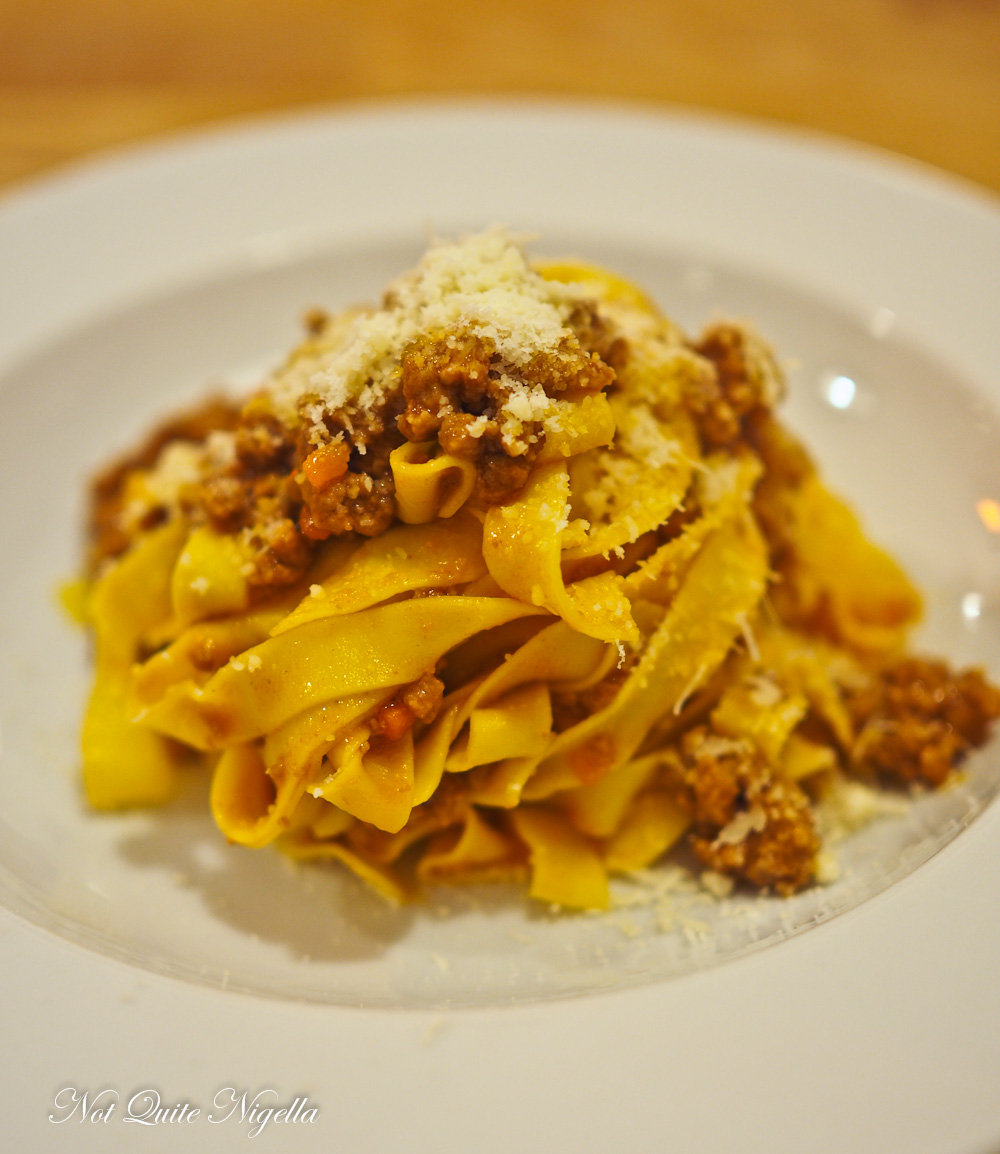 Mortadella is also a specialty and at the shop Tambourini they slice their enormous mortadellas thinly. Named after the mortar and pestle that they used to use in ancient times the mortadella here is delicate and divine. 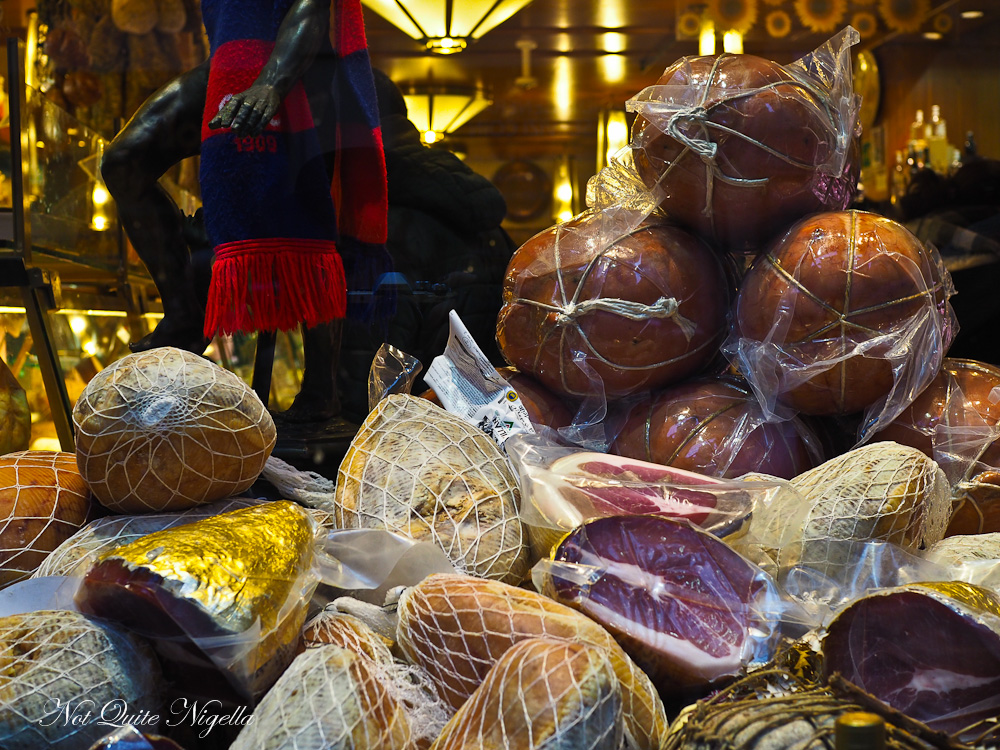 The old town of Bologna is designated by the walls, many of which were torn down by the Bolognese people who wanted to create more space for the expanding hub for transport in Northern Italy. 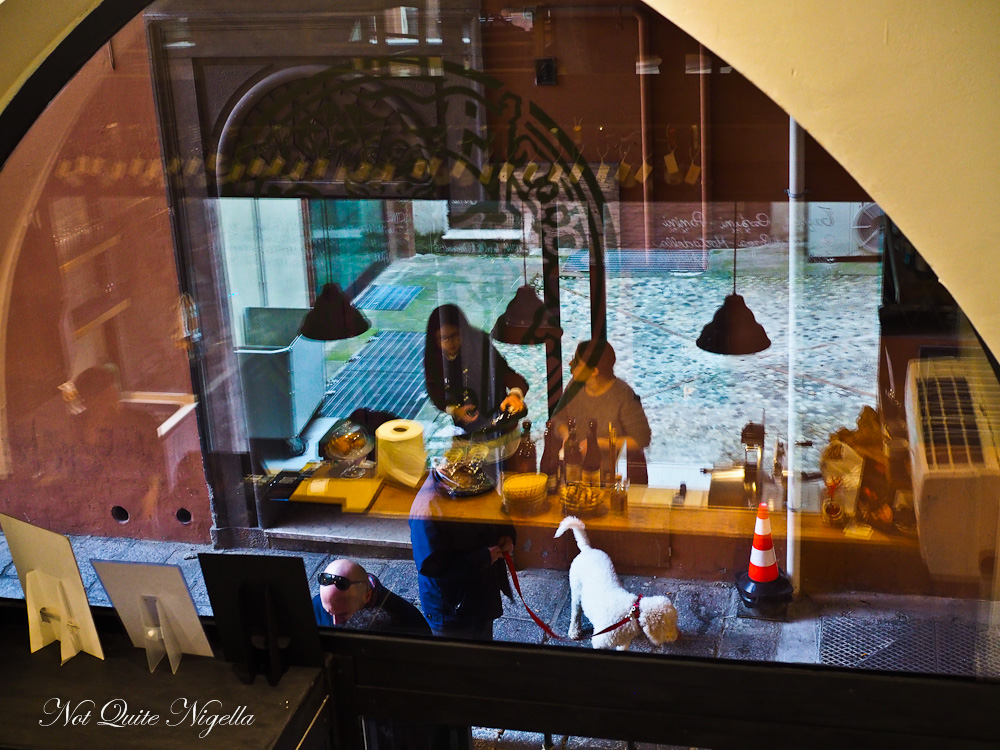 As a result the restaurants are tiny and medieval in size. Bologna is full of arcades and avenues to slip down and on Via Albari, L’Arco degli Albari is a tiny enoteca where the wine list is long but the food menu is neat. 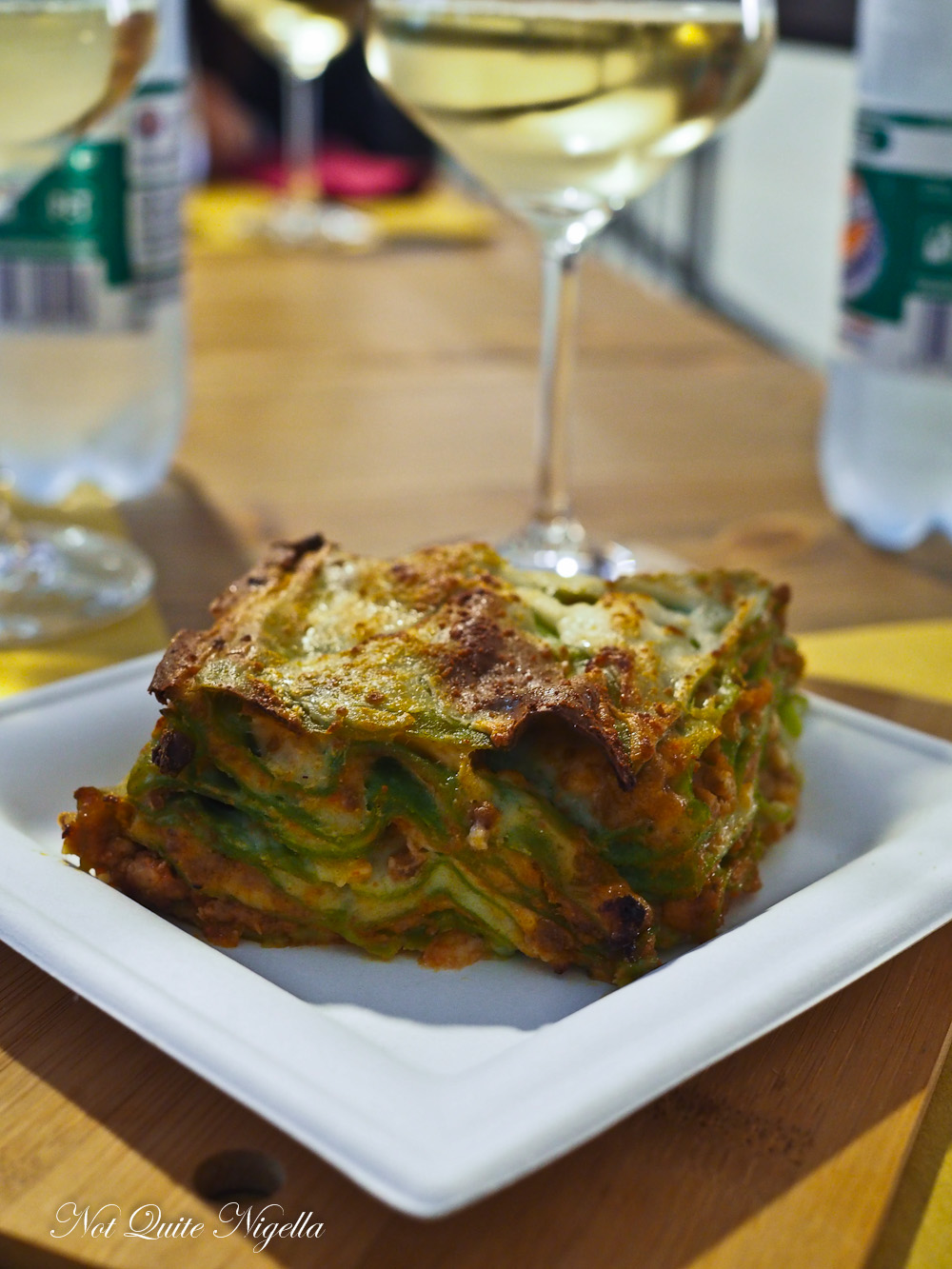 We're here to sink our teeth into their specialty, lasagne with the noodles made with spinach to colour them green. Inside is a mince ragu and bechamel. The crispy top is moreish and it's comforting. 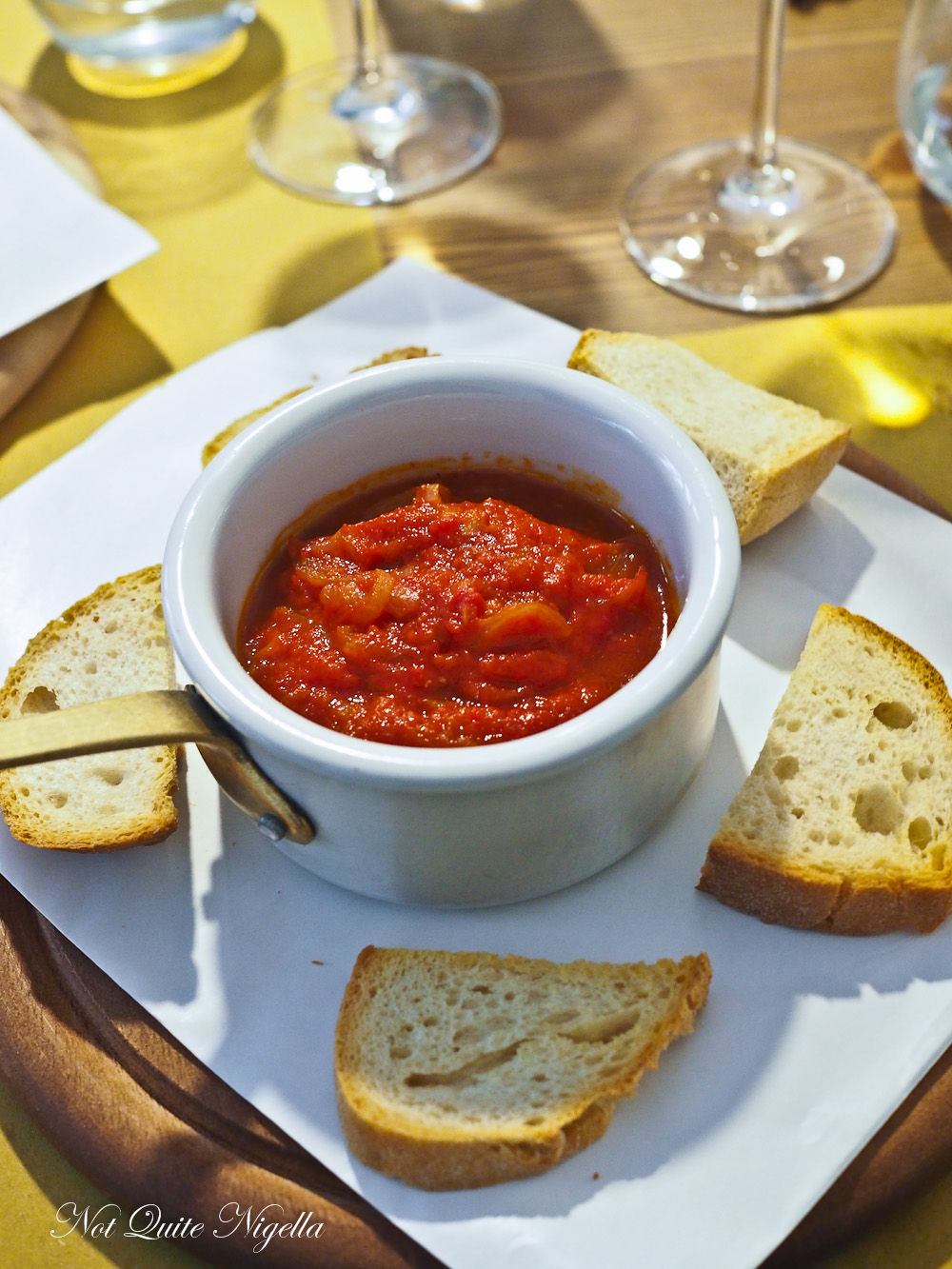 We then try another other speciality of the house called friggione which are softly cooked tomatoes with onion served with slices of toasted pane di casa bread. It's warming and comforting on this chilly November evening. 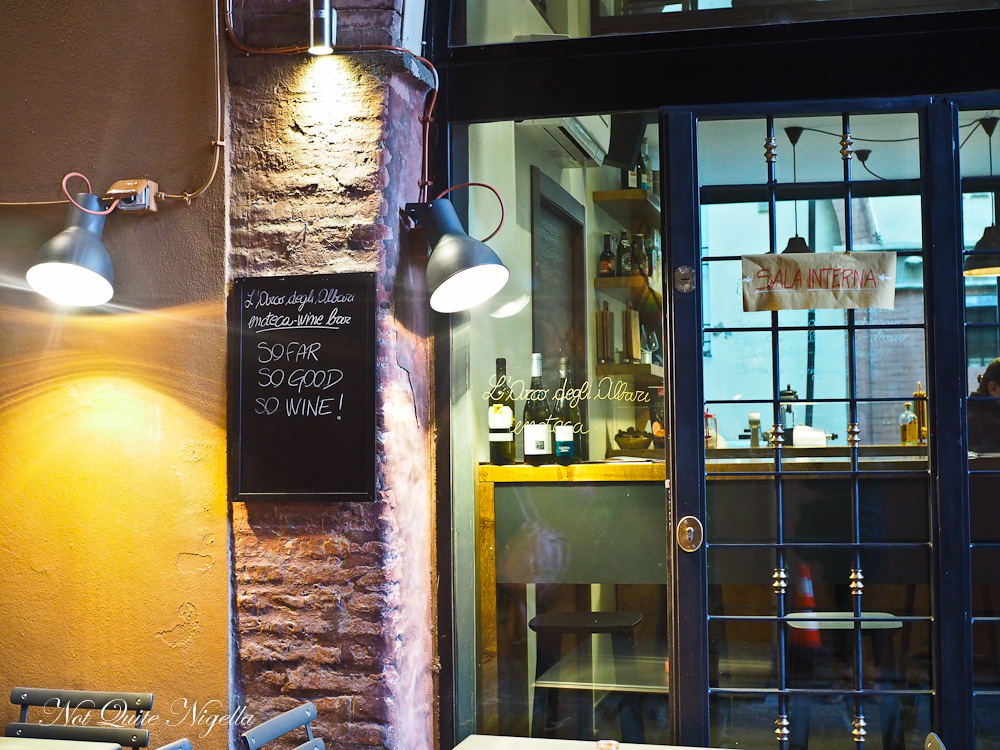 It's cold during late November and we see people sitting outside, wrapped in blankets, gloves and hats clutching steaming bowls, the steam tendrils tickling their noses. 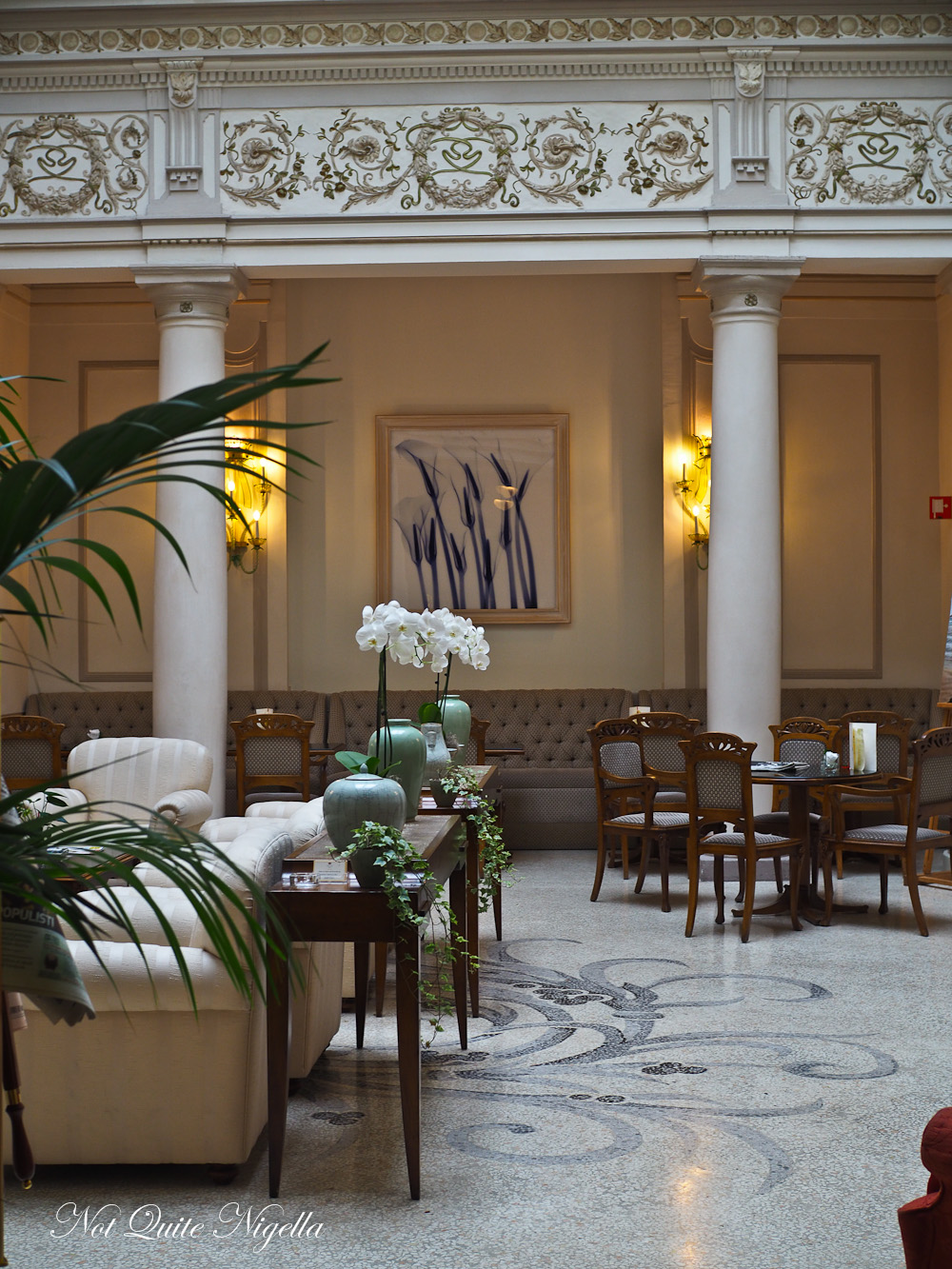 Our hotel for the night is the Corona d’Oro Hotel which is perfectly located in the old town, walking distance from most sights. It's just a hop, skip and a jump away from the Two Towers and Piazza Maggiore. 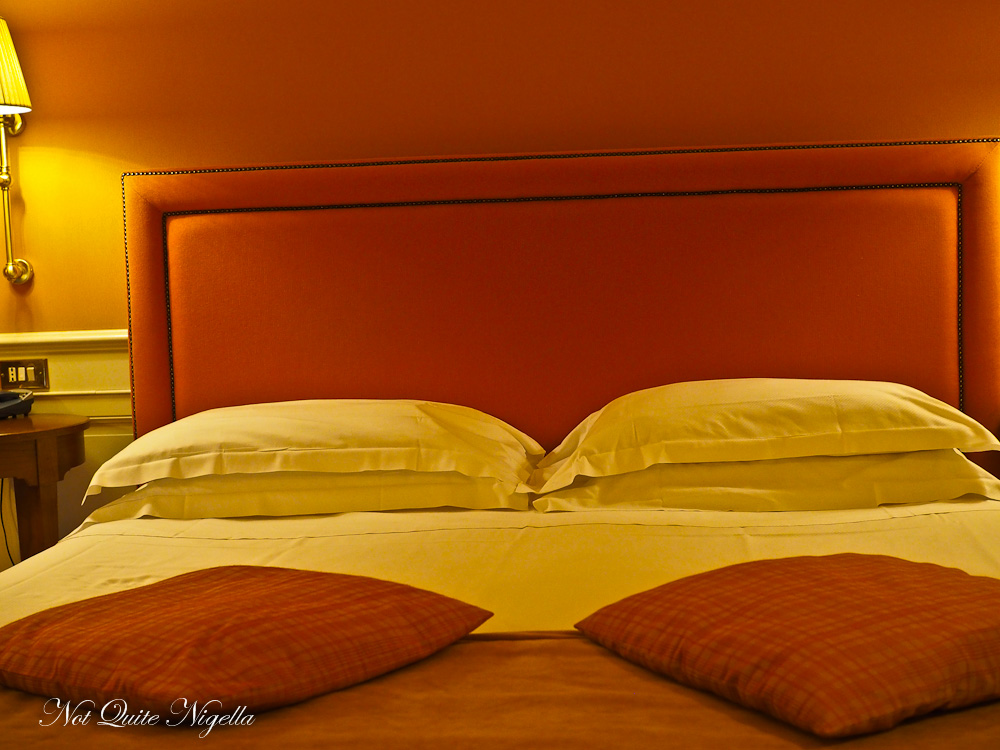 The 100 year old hotel is made up of a set of large aristocratic homes neatly stitched together. My room # 111 is charming with a warm hued apricot colour. 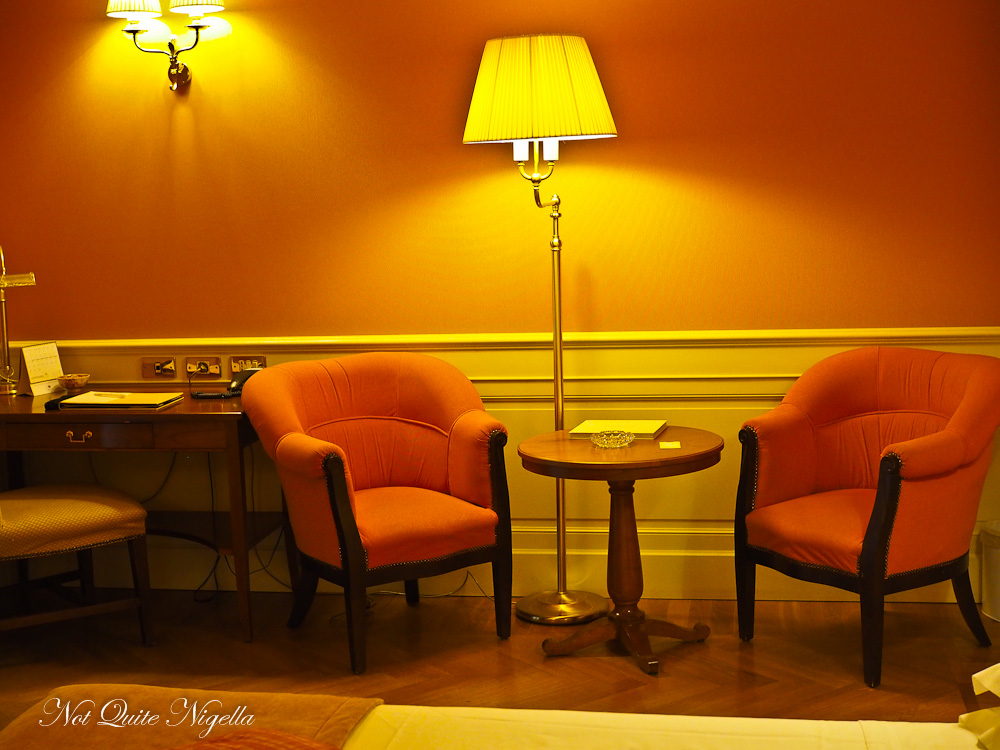 The bed is a king sized bed and there are creature comforts of television, desk, chairs and a cute little balcony that looks out into the courtyard. 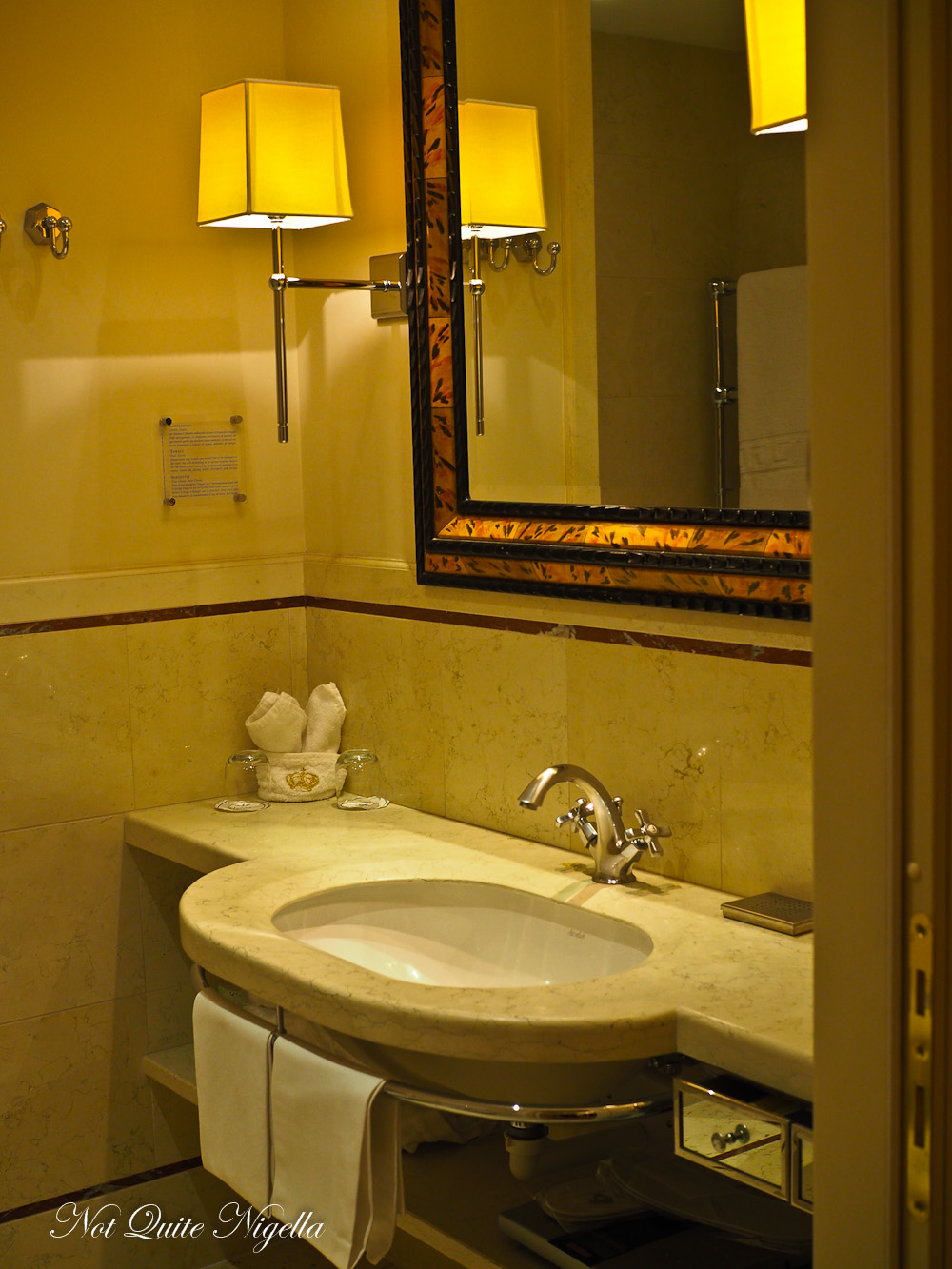 There is also plenty of space to store clothes, a safe and a marble bathroom with bidet and a separate bath. And bonus points for free wifi, extras amenities and warmed bathroom floors and heated towel railings. Brrr! 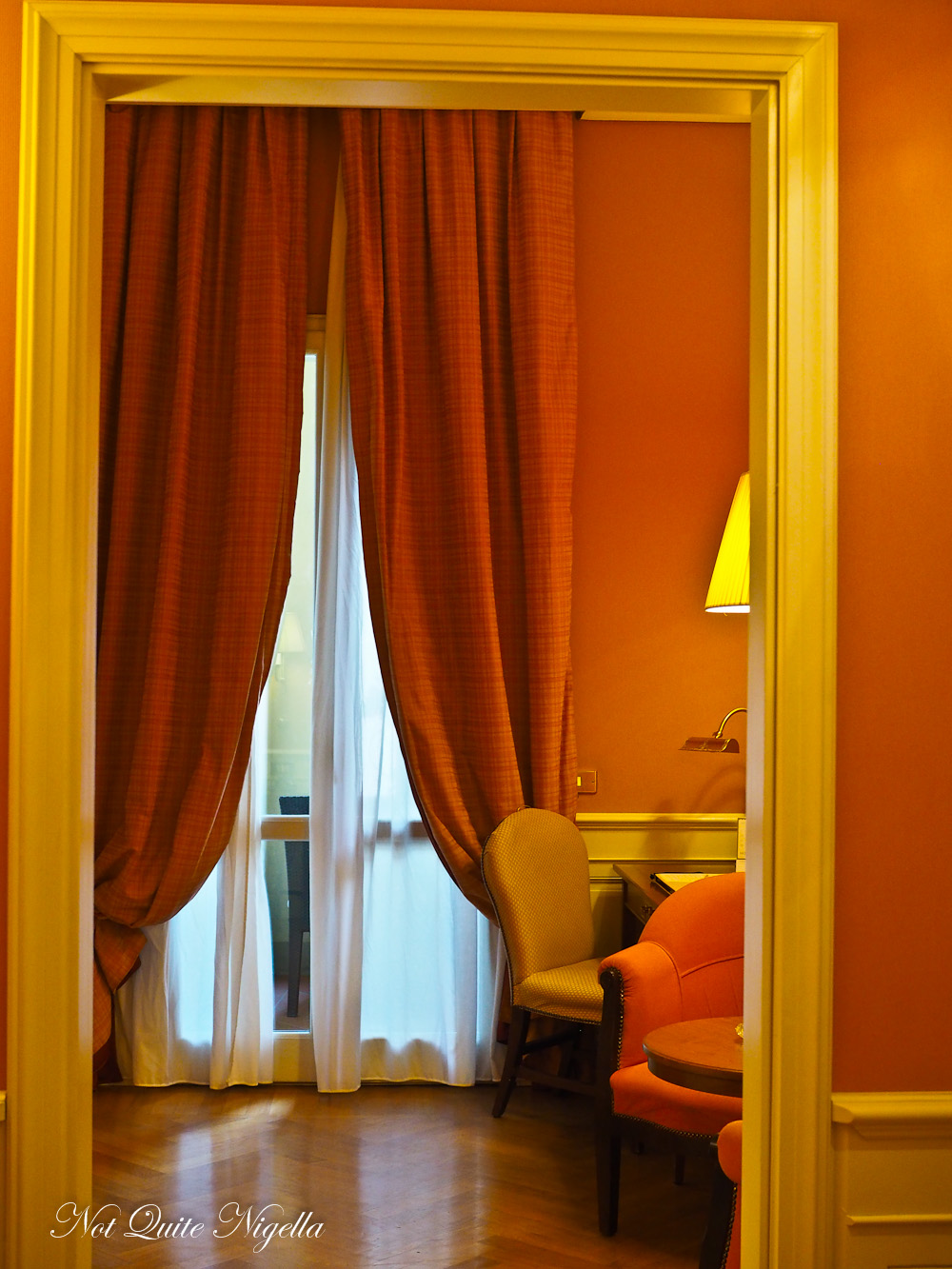 And don't miss breakfast here. Although it is a Continental breakfast it is extensive with an entire array of wonderful cakes and plenty of savoury choices too. And if you want to order a flat white, order a latte macchiato (latte means hot milk)! 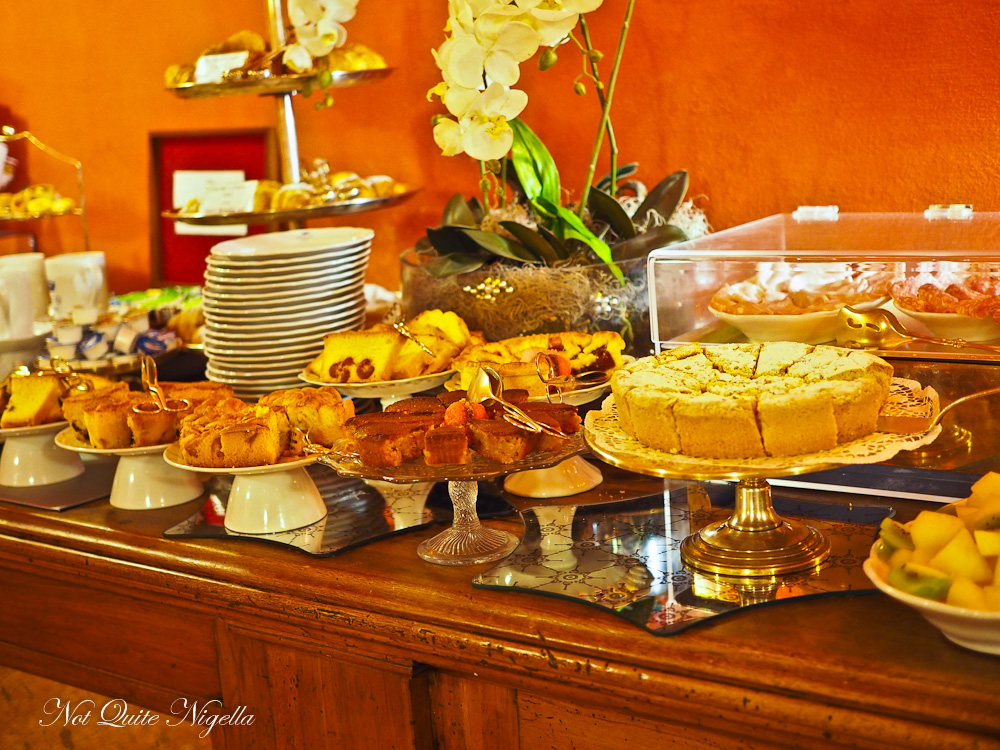 Gelato is really an all weather sort of treat and Bologna is also home to Carpigiani gelato university. Here students from all over the world can learn how to make the Italian sweet treat that can be traced all the way back to the 16th century. They can either enrol in one of the four week courses held in English, French or Italian. 60% of all students here come from outside Italy and there are a couple of Australians in this class. 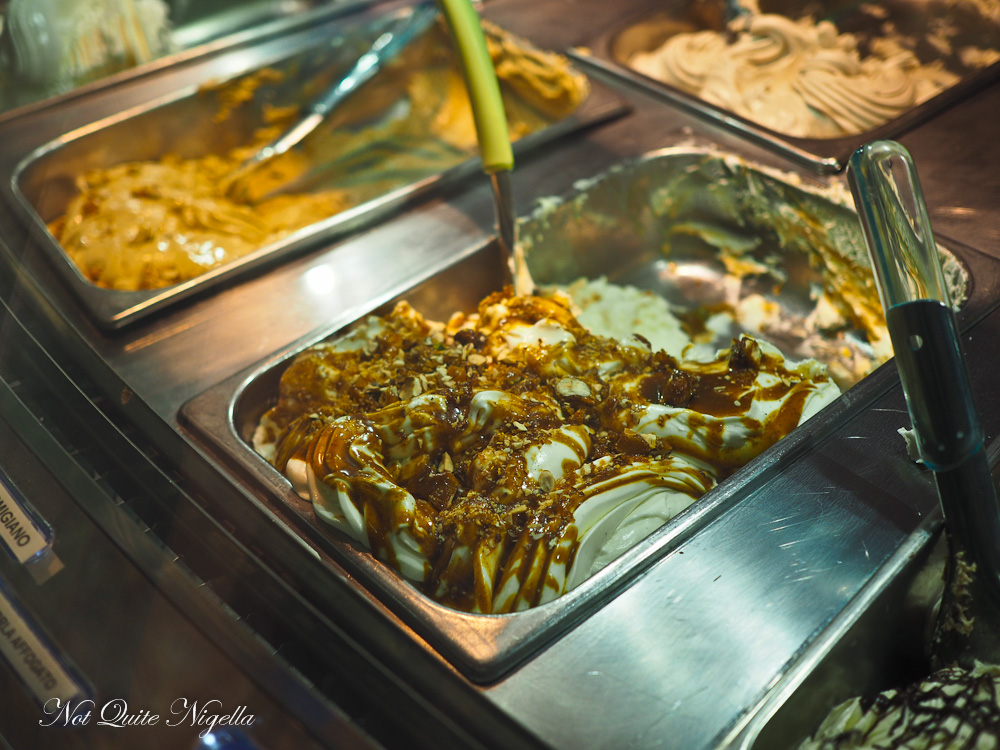 Or if you want a quicker class done over an afternoon there are those too. There are differences between gelato and ice cream namely factors like fat, sugar, air and temperature. 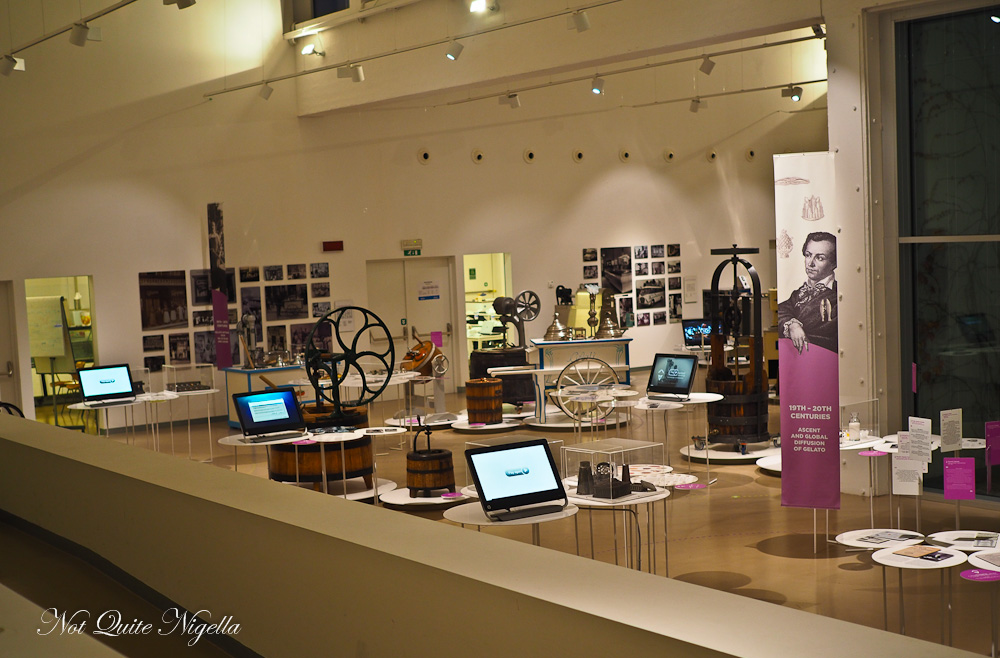 Sugar actually gives gelato the creamy mouthfeel and acts as an anti freeze to inhibit ice crystals rather than just as a sweetener. The air level varies depending on the flavour being used. High egg flavour like zabaglione require more air as the egg acts like a sponge whereas flavours like lemon need less at 20%. 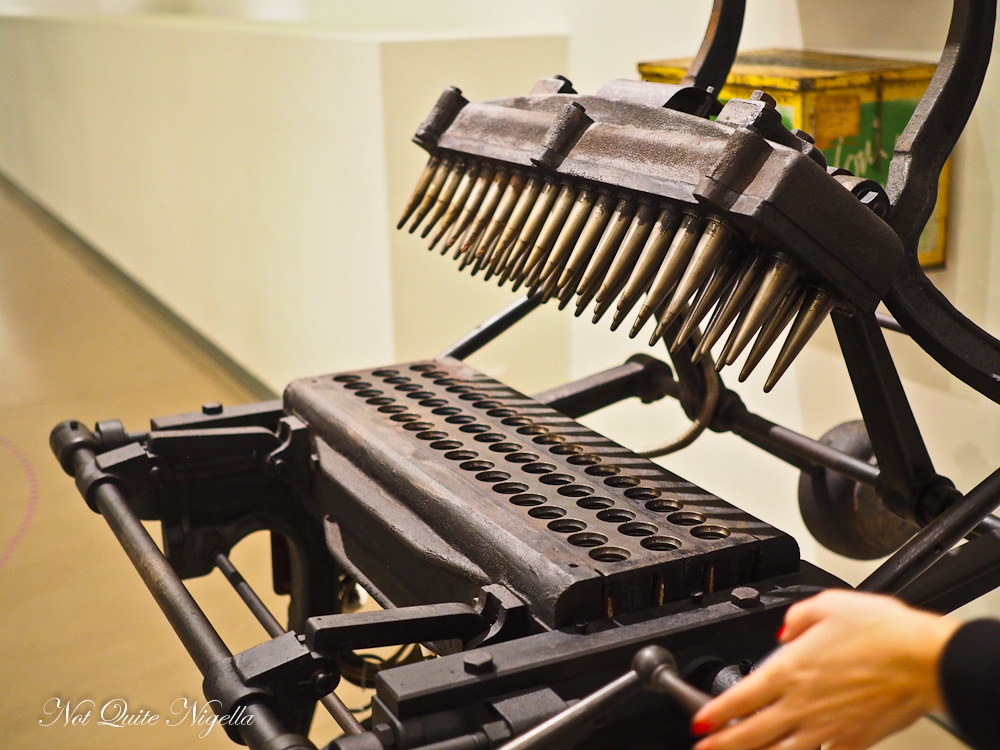 Just nearby the gelateria is the gelato museum that traces gelato's history over 14000 years ever since gelato was first discovered. The original name for gelato was candiero and it was cited in poetry and was described as made with vin santo. The first gelateria was opened in Paris in 1686 by a Sicilian. Called Le Procope it still remains open today. And even in this cold the gelato tastes wonderful.

So tell me Dear Reader, did you know about tagliatelle bolognese vs spaghetti? And would you like to try an authentic bolognese pasta? Do you often make your own pasta? 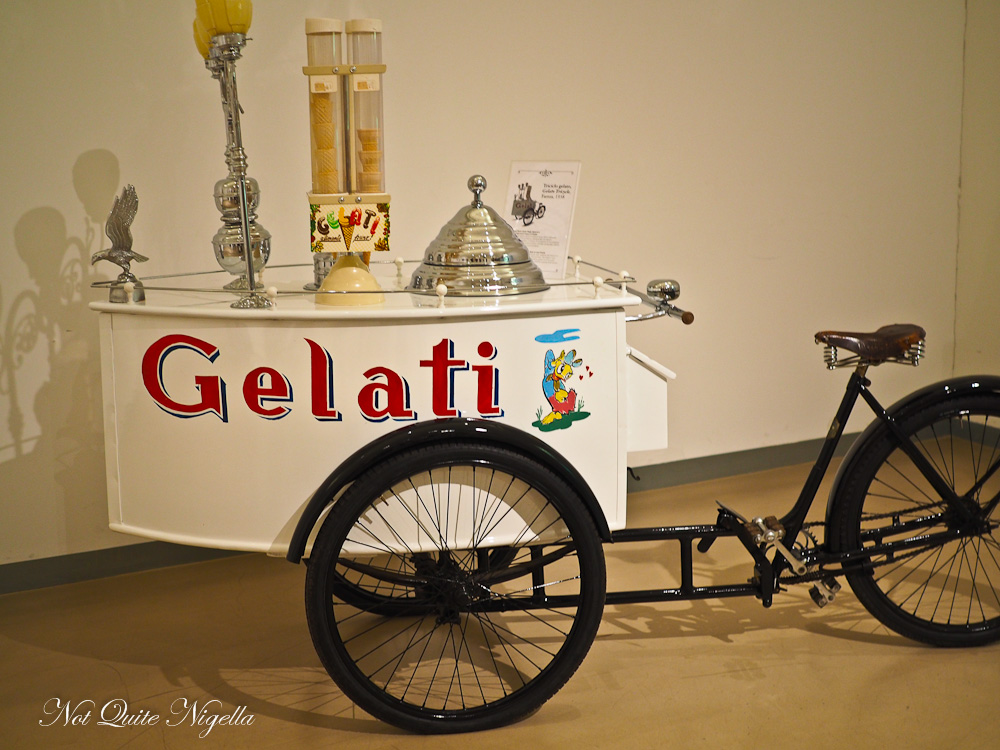 NQN visited Bologna as a guest of The Emilia Romagna Region Tourist Board but all opinions remain her own. 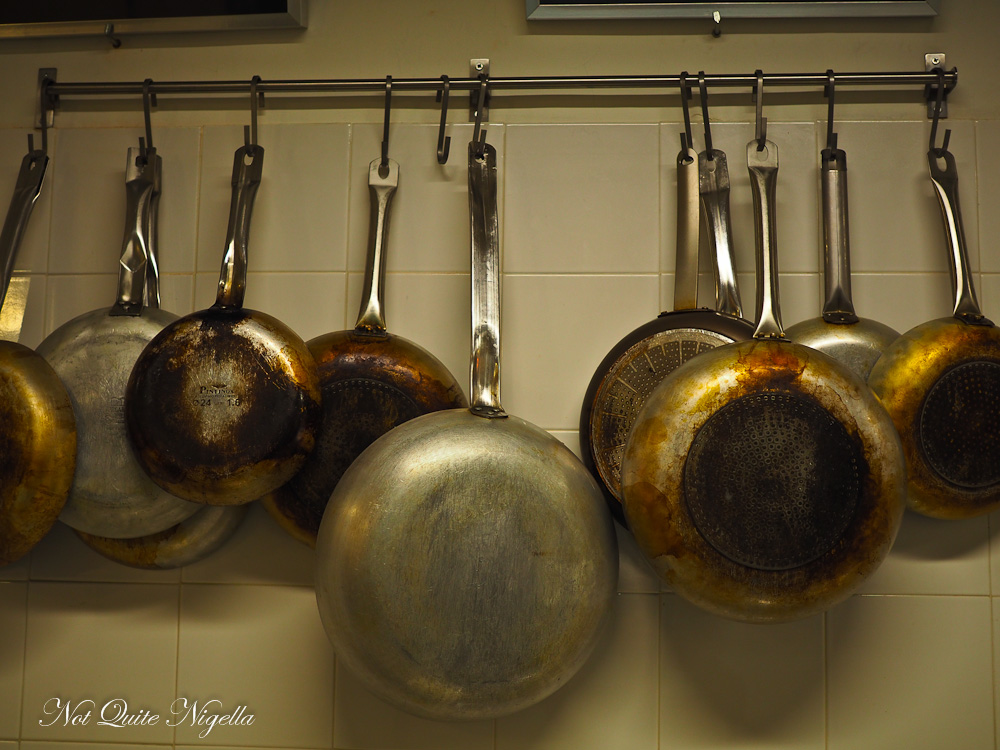