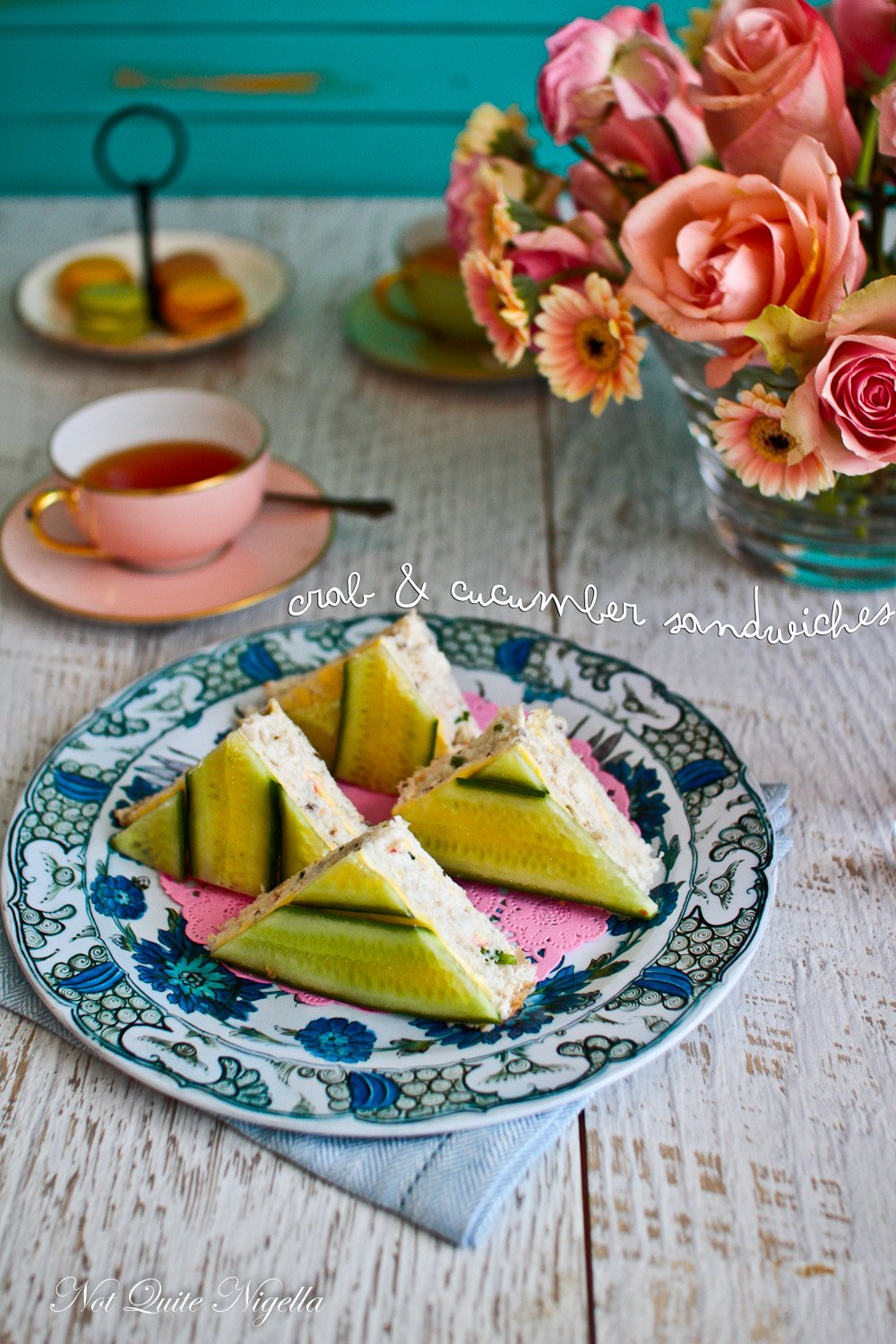 These crab and cucumber sandwiches have the cutest stripe effect on the outside of the sandwich. You can of course add anything in to fill them, not just crab but if you want some adorable sandwiches with a difference, then try this easy to achieve cucumber stripe effect!

While we were in the middle of training one day, Nina recounted an encounter with an older gentleman that morning. Because names are not her strength, she described him as some "right wing conservative journalist". For months she had seen him walking his dog in the park and they had not uttered a word to each other. But on that day, the day after Tony Abbott was ejected as Prime Minister, he was eager for a chat - positively giddily so.

"So what did you think of Tony Abbott?" he asked her, his eyes shining with eagerness. She told him what she thought of him which wasn't particularly flattering but relatively mild. His face started to redden and his fists balled and he started to splutter and defend him. She looked at him growing apoplectic with anger and wondered why on earth he would start a conversation with a stranger if he was only going to get agitated.

She looked at him and his enraged face and decided that she had two choices: to argue back or not. She realised that she didn't care enough about him to argue back. "Sure, whatever you think," she said smiling sweetly. "Maybe I've been reading the wrong media," she added laughing because she doesn't read his publication and probably never would. And she shut her car boot, drove off continued on her day having not engaged with this angry man any further. 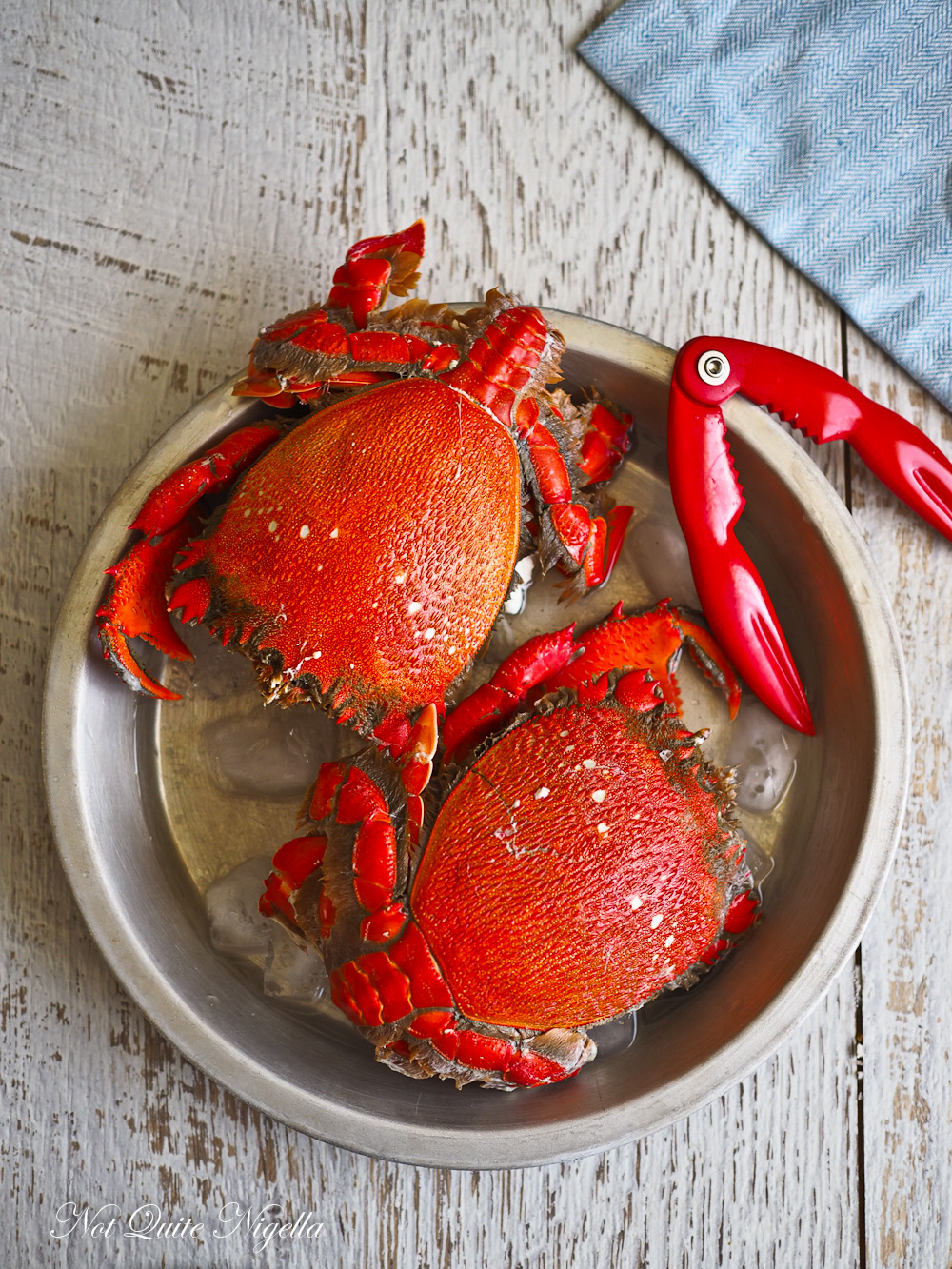 Sometimes life makes you engage with something painful. And I had an encounter where I came off worse recently. I bought some spanner crabs at the market. I love crab and I was curious to see what these spanner crabs were like and whether they'd make some good crab sandwiches or not. So I took them home and started to crack one open to pick out the meat to make a sandwich. That's when I realised that the spanner crabs were raw (unlike other crab varieties, when raw they are orange and when cooked they merely turn a darker orange).

I cooked them and then started to shell them. And can I just say that whilst it is delicious, I completely recommend availing yourself of pre-picked spanner crab meat? Because I ended up with cuts all over my fingers and it took a long time to get the meat out. I was determined to make these crab sandwiches as good as possible because of the time taken to make them. And then it came to me-one of my favourite prawn dishes is a har gow with sesame and ginger. I'd put an Asian twist to these crab sandwiches!

I first saw the cucumber pattern on sandwiches at the Mandarin Oriental Taipei in their club lounge. It was such a cute idea that I filed it away mentally to do. It's an easy effect to achieve, much like it was easy to pimp these crab sandwiches up with a bit of ginger, sesame oil and chives. I guess sometimes it is good to engage with things that are difficult - but only if there is something tasty as a result!

So tell me Dear Reader, do you ever back out of an argument because you can't be bothered or you don't care enough to argue with the person? Do you enjoy tasks like shelling crab? 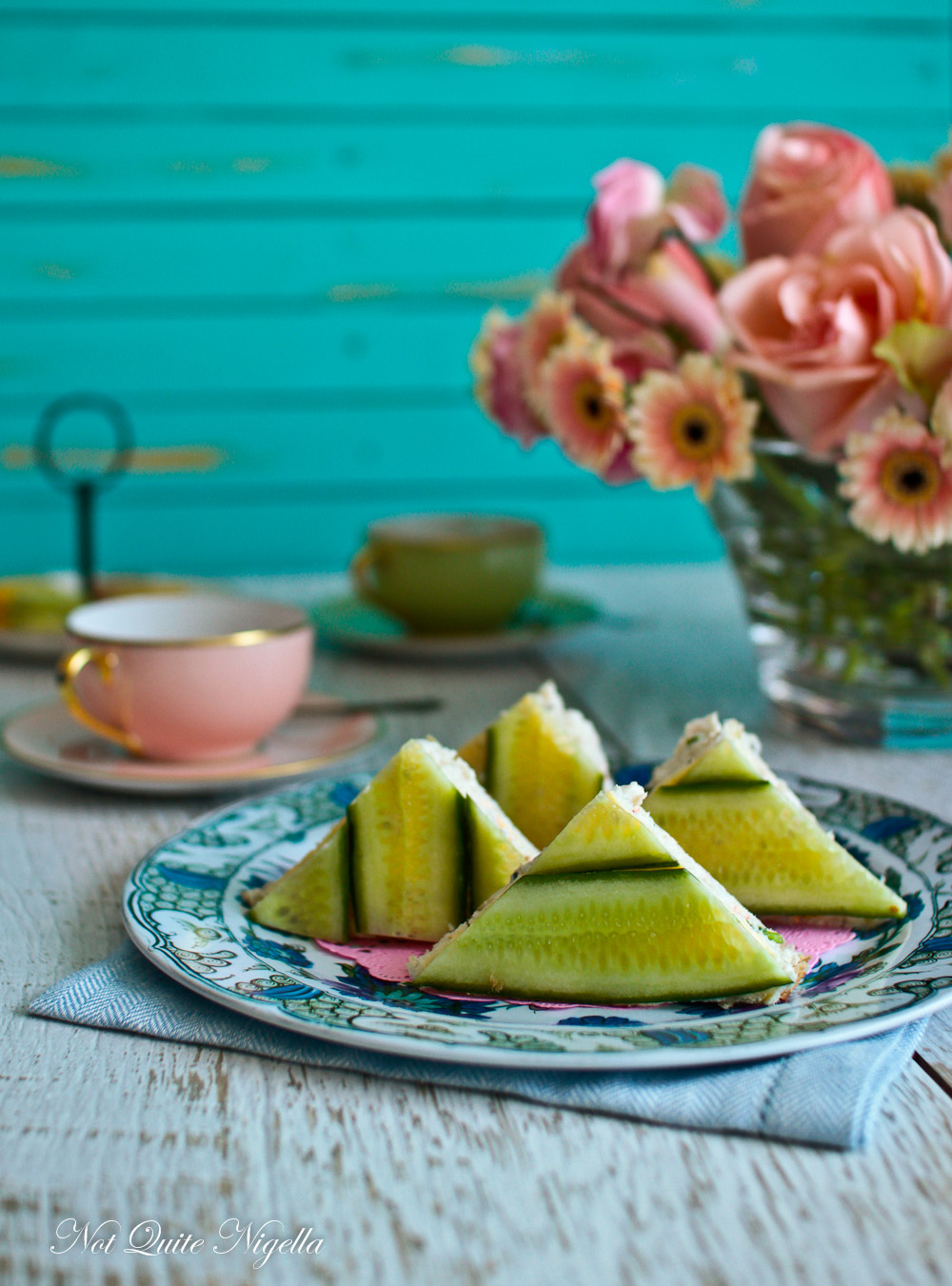 Step 1 - Mix the crab meat with the mayonnaise, grated ginger, sesame oil and chives and season to taste. Butter six slices of bread.

Step 2 - Place a third of the crab filling on three of the slices of bread. Place the other piece of buttered bread on top, butter side facing up. 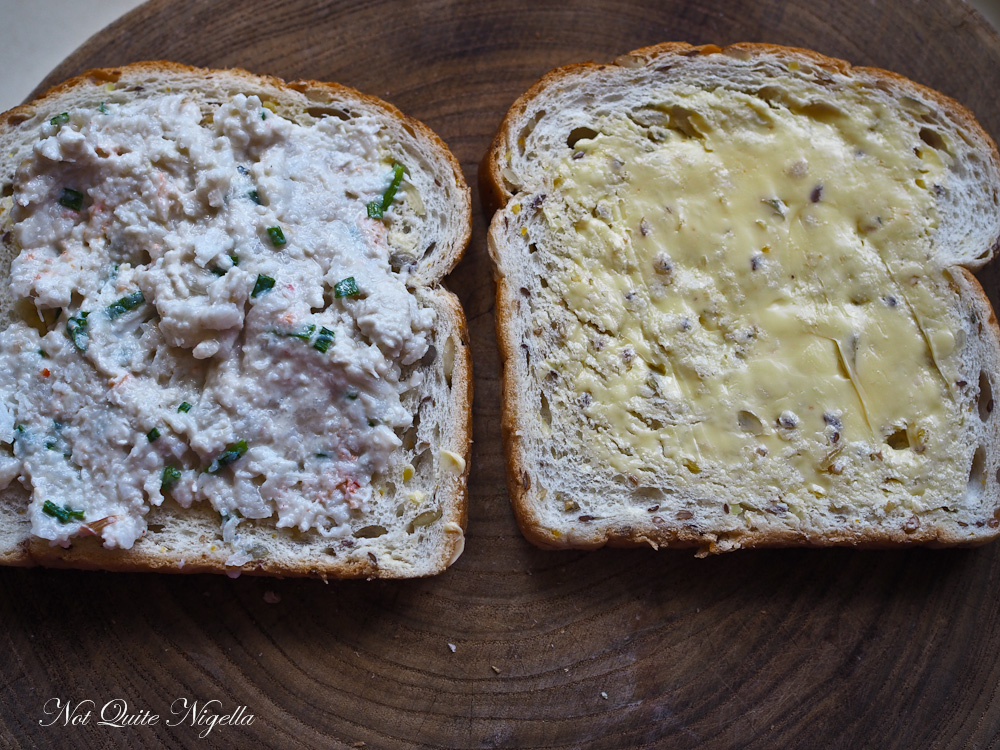 Step 3 - Slice cucumber thinly. Place three slices of cucumber on top of the buttered slice. Cut off crusts and extra cucumber and cut each sandwich into four triangles. 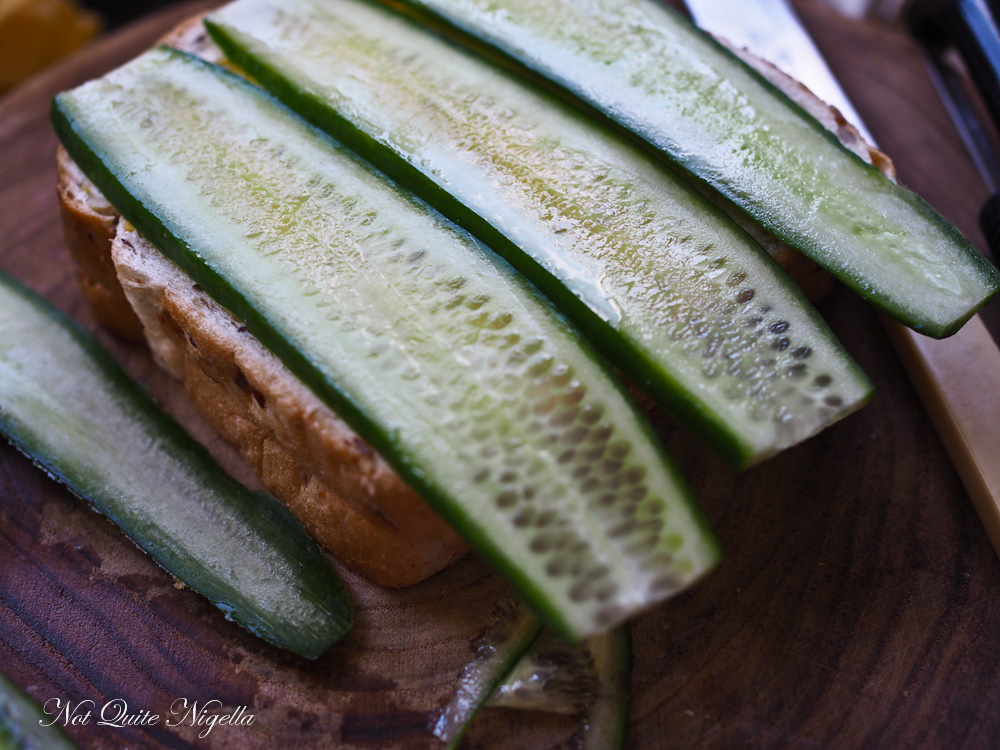 *To cook crabs, wash them well. Spanner crabs are orange when they are raw which made for a nice surprise when I got them home ready to take the meat out and then I realised I had to cook them. Place a large pot of salted water to boil. Place the crabs in the pot and when the water resumes boiling, time 4-5 minutes. Remove from the pot and place in a large bowl of ice water to stop the cooking process. You can store these raw for 2-3 days in the fridge (store with the underside facing up). The shells are hard so I do recommend buying the meat already picked as they are a lot of work with not a great amount of meat inside them (1 sandwich equalled 1 spanner crab!).