Soft Shell Crab Burgers & How To Clean The Little Buggers! 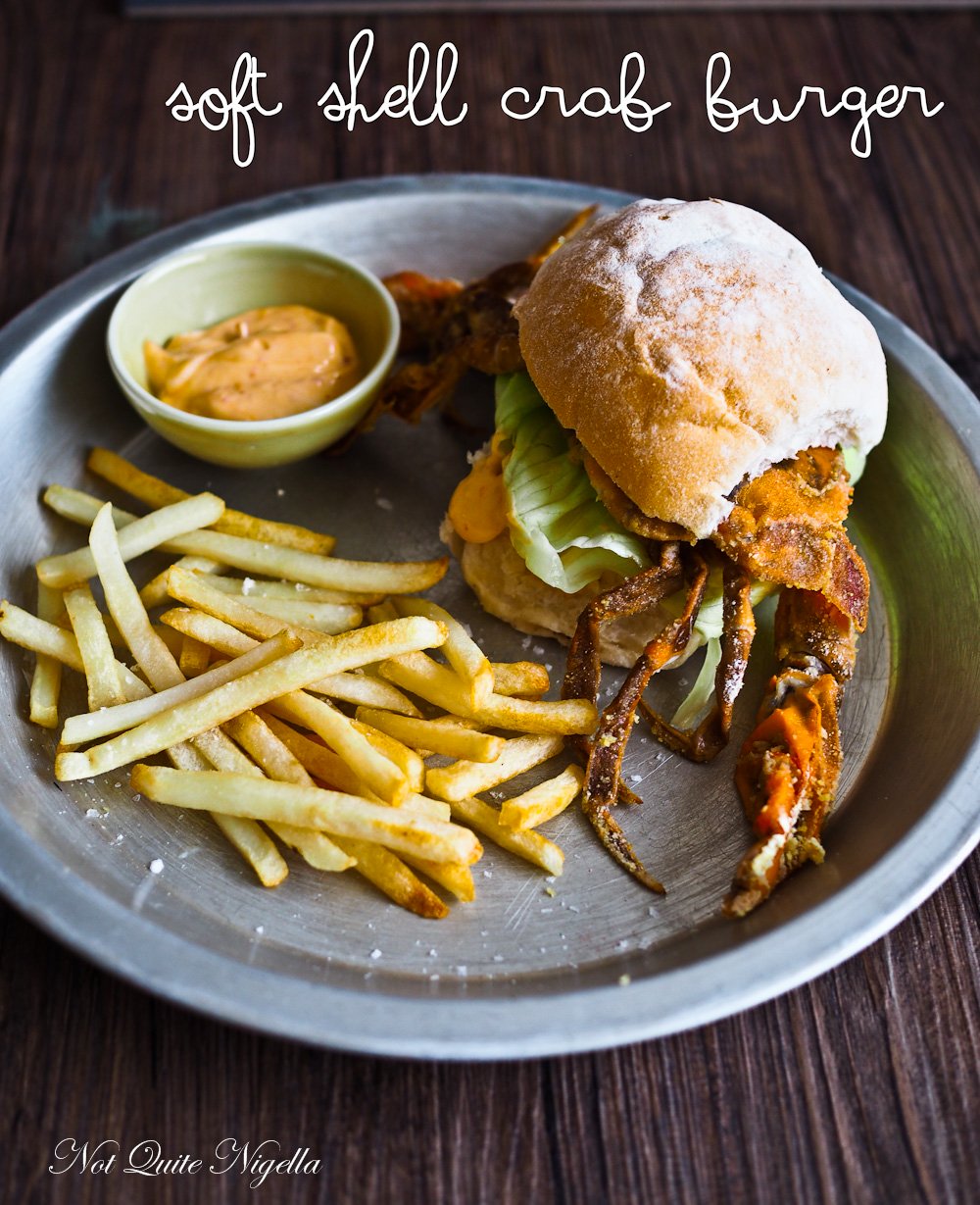 Eaten plenty of soft shell crab but never prepared it? These crabs are easy to deal with because of their very soft, almost thin plastic-like shell. They also make the most fun Halloween snack with small slider buns due to their spider-like appearance!

I think the reason why I love Halloween so much is that it is an entirely different sort of holiday from anything else. The rest of the year is spent doing pretty things and it is nice to be able to do something downright strange or the opposite of what you're used to. I'm all up for unusual dinners or parties and so is Mr NQN. However a few years ago there was one party that we had to question.

It was for his sister Amaya's wedding to Laporello. They conjured up a very interesting concept for their special day. Their idea was that the wedding would take place on the water. Each couple or person would be in a separate dinghy and they would watch the priest marry them on a three person dinghy. The reception would also take place on the water where all of the food would be served up on a larger dinghy and guests would row up to it and help themselves from the dinghy buffet.

They were quite serious about this idea too and it was only when big brother Mr NQN told them that it was quite mad that they realised that perhaps some people might not like it. My parents refused flat out to attend and slowly but surely other guests expressed concern about logistics and falling in the water and well, drowning. 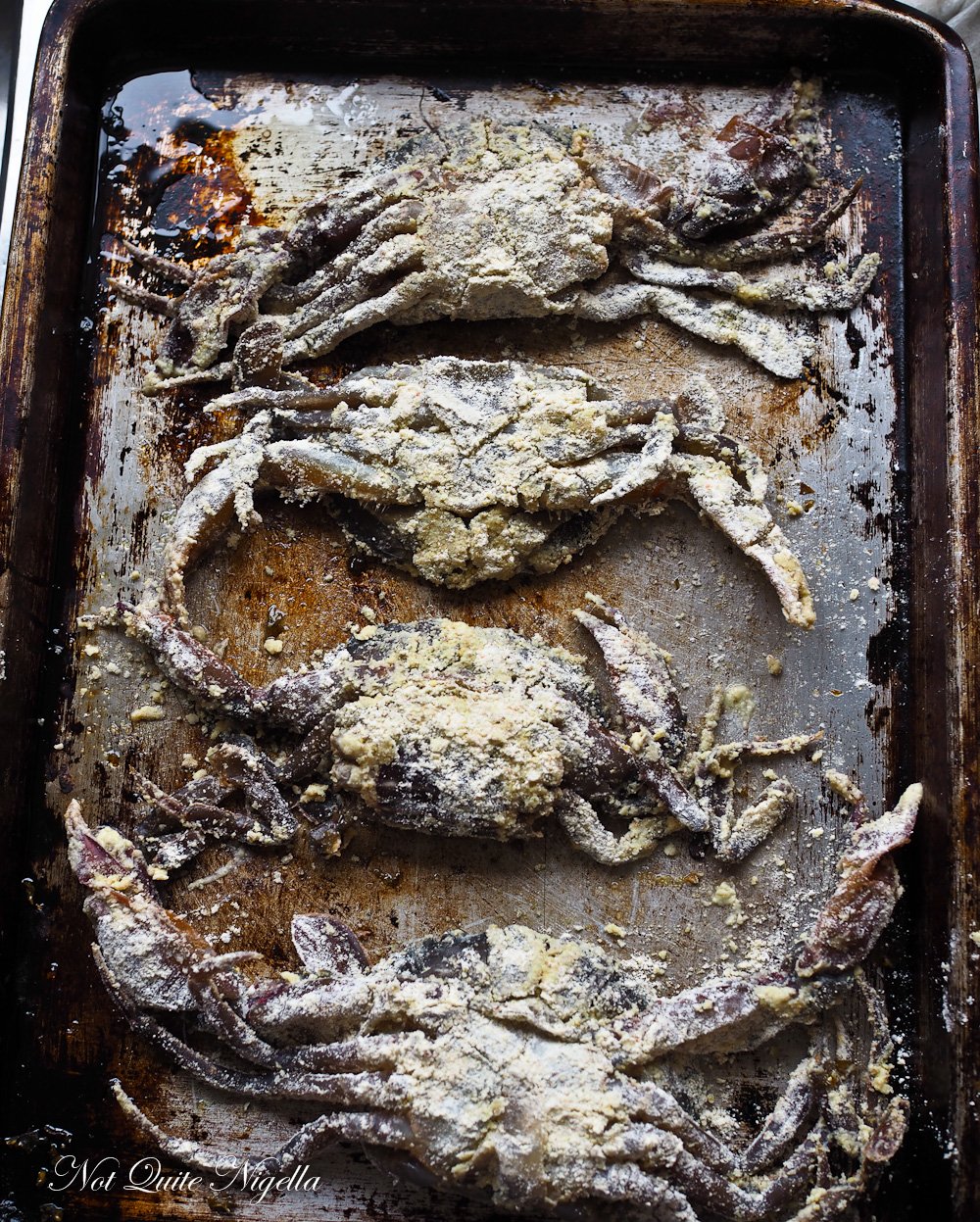 I kind of understand the whole madness when it comes to planning however. And during this year's Halloween party I didn't realise that I had unknowingly overcatered to an obscene amount. So there was one item that I was planning to serve but didn't. It was these spider or soft shell crab burgers.

The idea came to me a few years ago but I've never cooked soft shell crab before (although I've eaten it plenty of times). Soft shell crabs are usually sold frozen in boxes weighing a kilo (2 pounds) so how many you get depends on the box. Thaw them out in the bag and then clean as as shown below. The idea of making these for Halloween was reinforced when Belinda and I went out to lunch and we ordered a soft shell crab wrap. She refused to eat one part of it as the legs resembled spider legs!

Soft shell crab is usually deep fried but I prefer to bake it. It doesn't make it as crunchy but it's still a delicious burger. You simply add some chilli and lemon mayonnnaise to a burger bun, some soft lettuce and your soft shell crab burger is ready to either frighten or delight you-or both!

So tell me Dear Reader, have you ever eaten or cooked with soft shell crab before? Would you be into the dinghy idea for a wedding? And do you think they look like spiders? 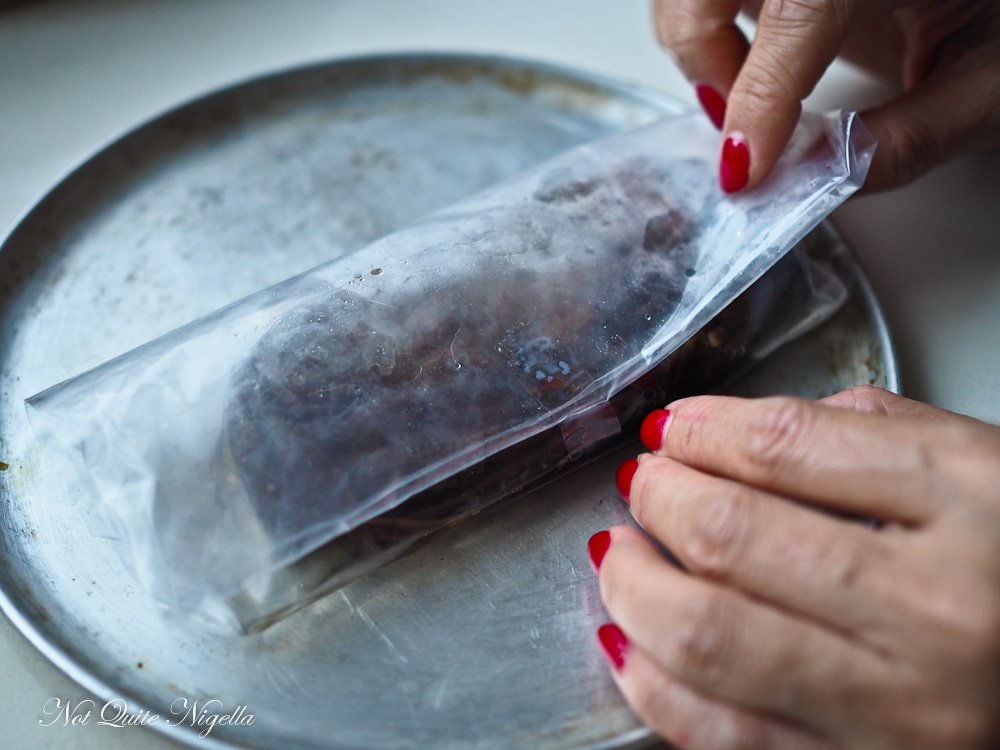 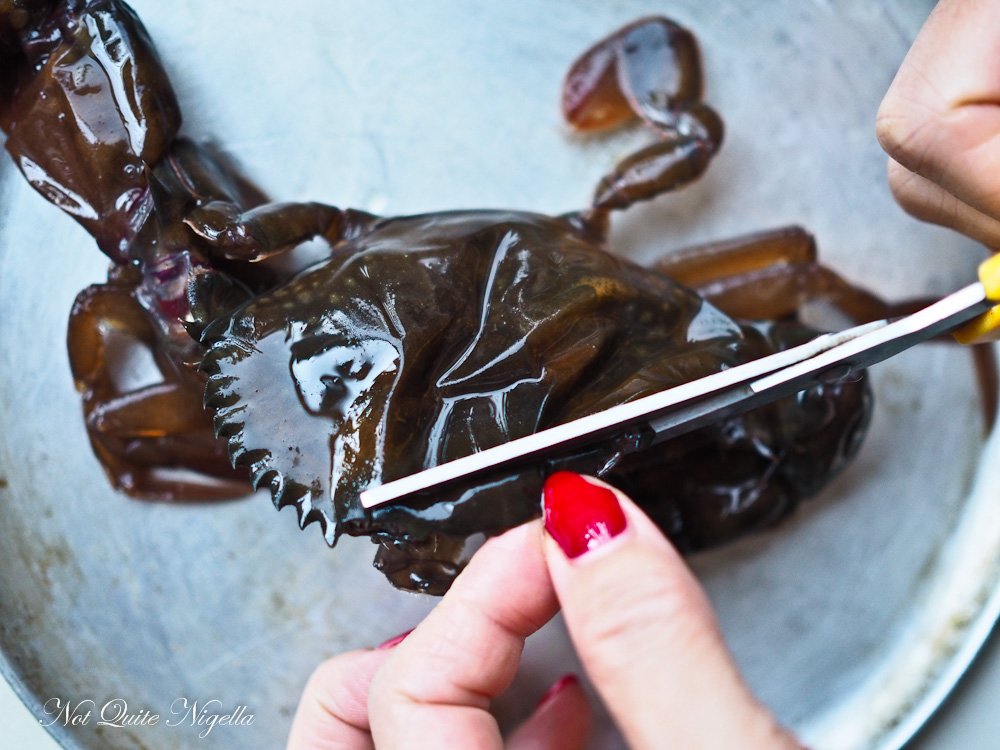 Cut off the eyes. You will feel like a serial killer. If you don't then you probably are one already and you don't know it. 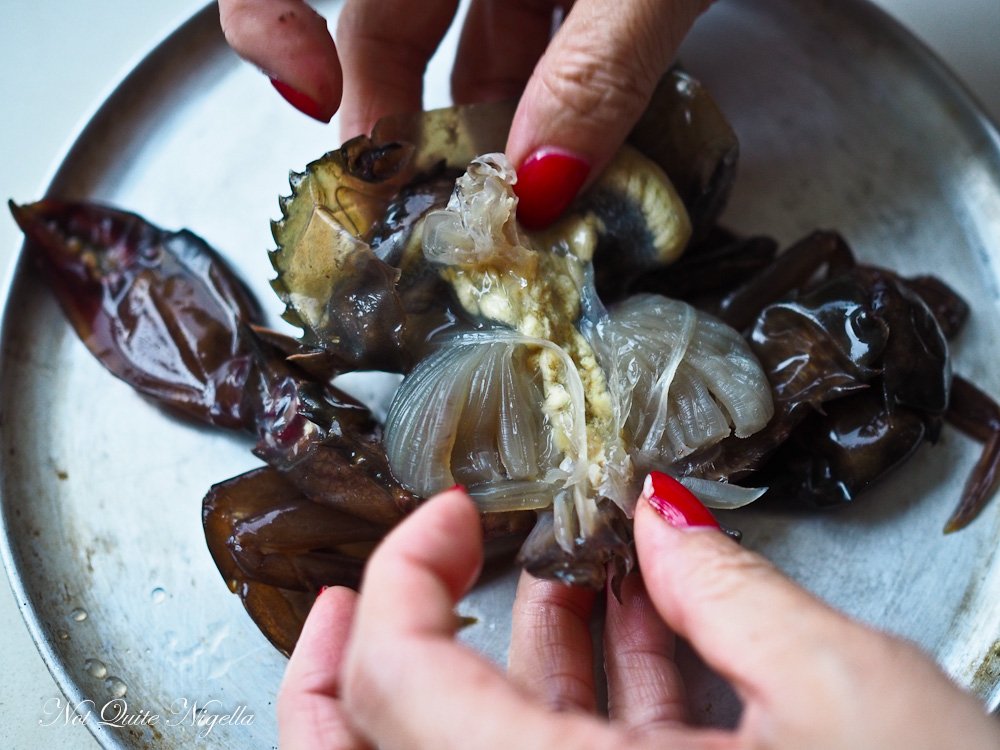 Shell side up, lift the top off to reveal the dead man fingers, those greyish long sacs on each side of the centre. 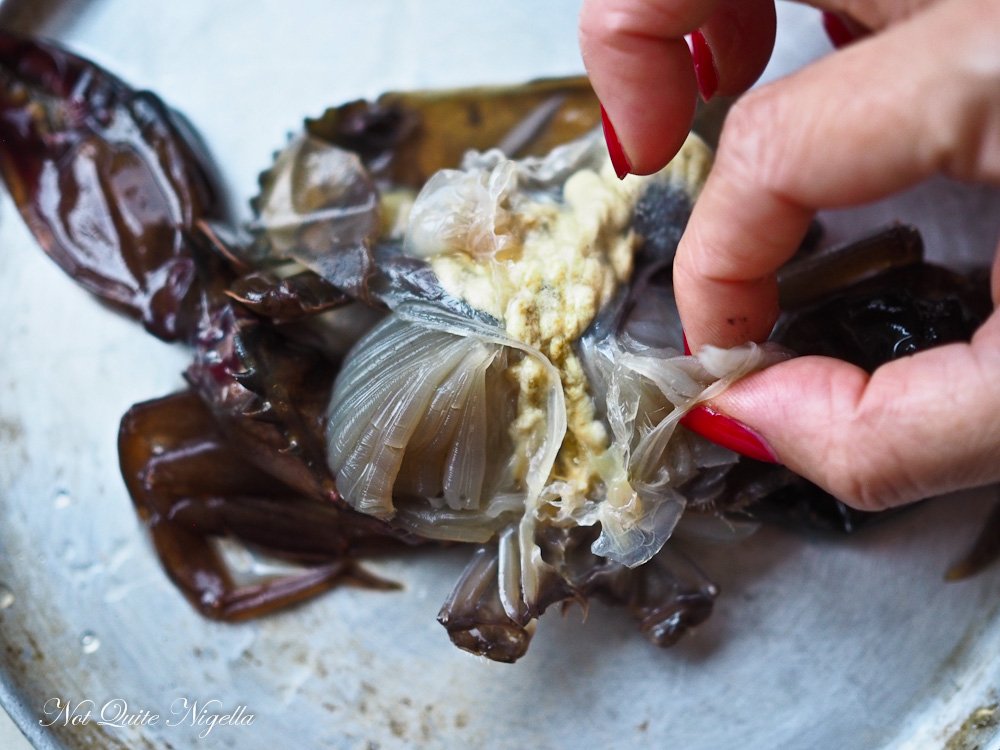 Remove them on both sides. 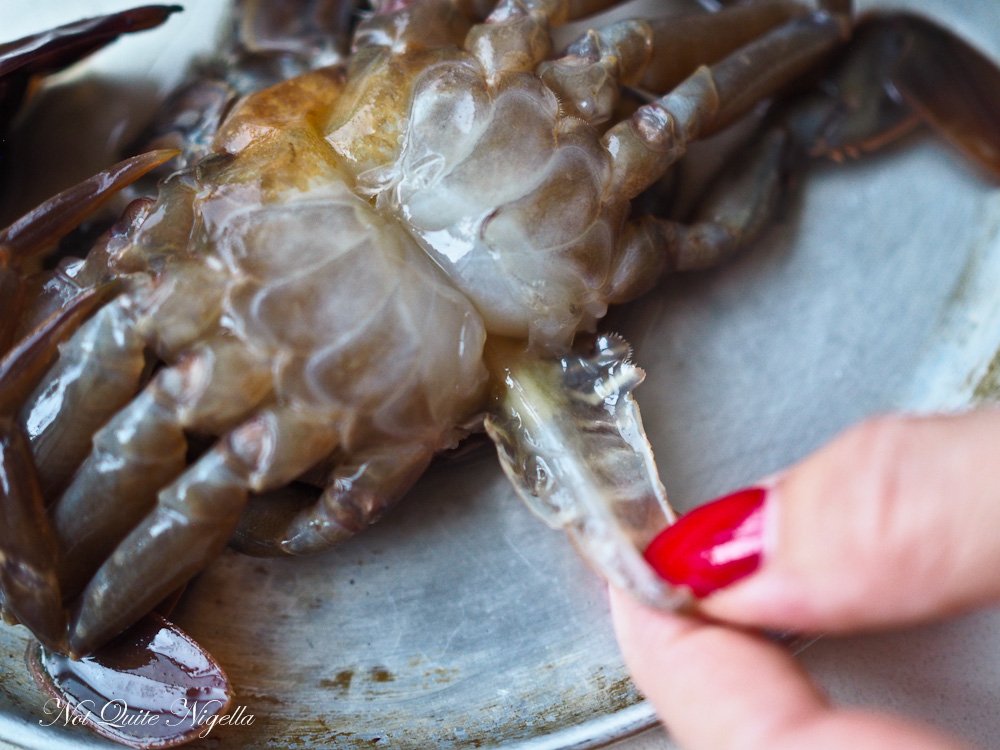 Turn the crab over and remove the triangular flap

Step 1 - Preheat oven to 190C/374F and have a baking tray ready. Remove the crab from the individual packets and rinse gently under running water-the legs are quite delicate and can come off easily. Cut off the eyes from the crab with a pair of scissors or a sharp knife. Then look underneath the main shell and remove the dead man gills. Turn the crab over and remove the triangular flap and make sure that any excess water is removed from the shell. Drain and dry on paper towels patting them dry.

Step 2 - Mix the cornmeal and salt in a shallow bowl and dredge the crabs in one by one. Place the crabs shell side down on the tray and drizzle with oil. Bake for 10 minutes. Turn over and bake for 3 minutes.

Step 3 - Meanwhile cut the buns in half and warm them up. Mix the mayonnaise, chilli sauce and lemon zest together and spread on the bottom of the buns. Fold a lettuce leaf in half and place on top and then add the soft shell crab. Serve immediately.