It's Going To Get Dirty In Here: Triple Layer Chocolate Pumpkin Pie! 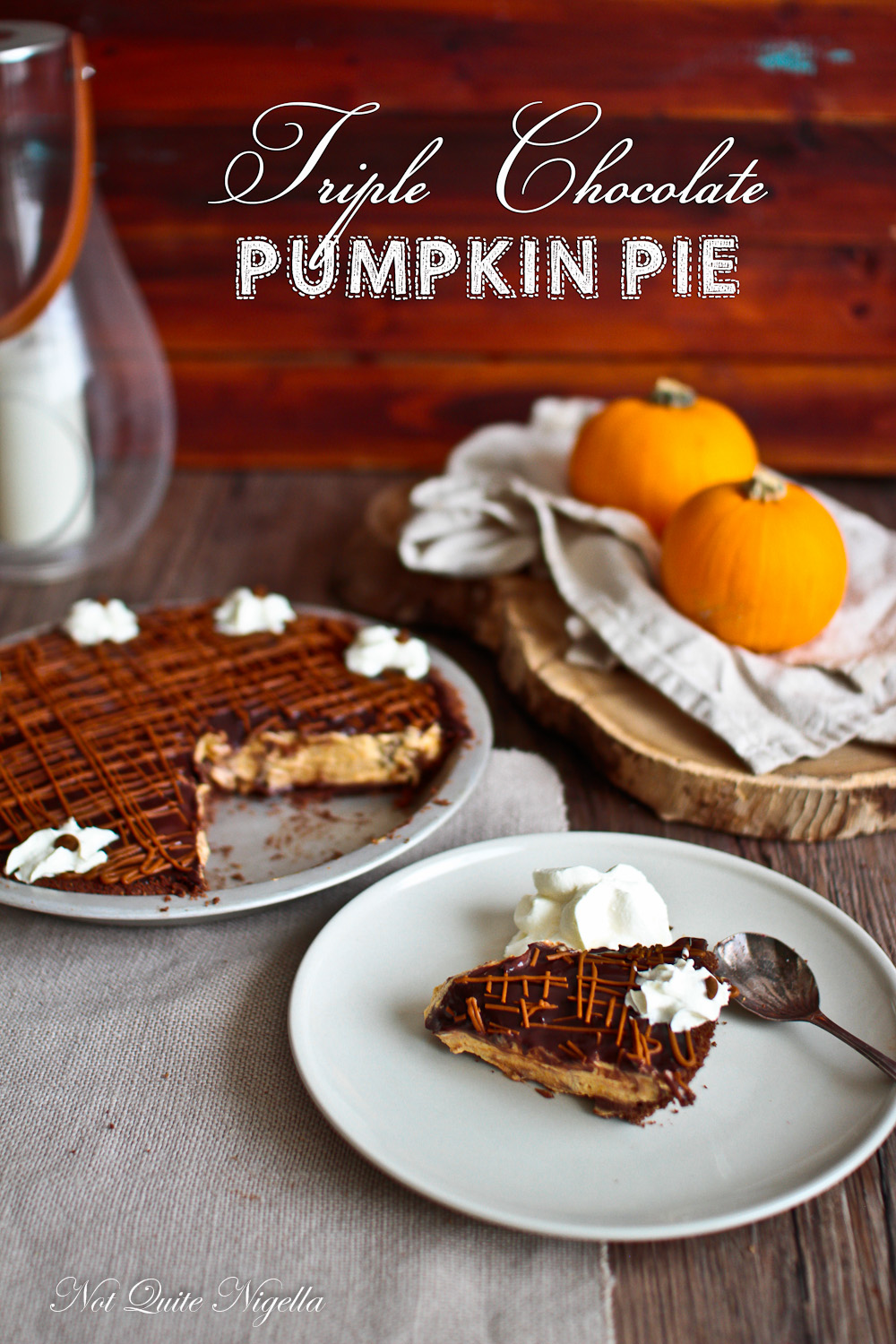 Want to make a delicious pumpkin pie but with a twist? This ethereally light pie is a little bit pumpkin pie, a little bit cheesecake and a whole lotta chocolate. But only in the best way. Another appealing thing about it is that is requires very little baking so if you've got a touch of heatstroke, this might be the pie for you!

Happy Thanksgiving Dear Reader! Last weekend we had our Thanksgiving dinner because as I've mentioned, we will use any excuse to get together with friends and learn about traditions through food. In America it is celebrated on the fourth Thursday in November (so today!) and the tradition started as a way to commemorate the 1621 harvest festival celebrated by the Pilgrim forepersons. The native Americans also have a harvest festival to give thanks for the corn harvest. This is celebrated by the baking of corn bread which is brought to the longhouse where a speaker gives thanks for the Great Spirit for their bounty. 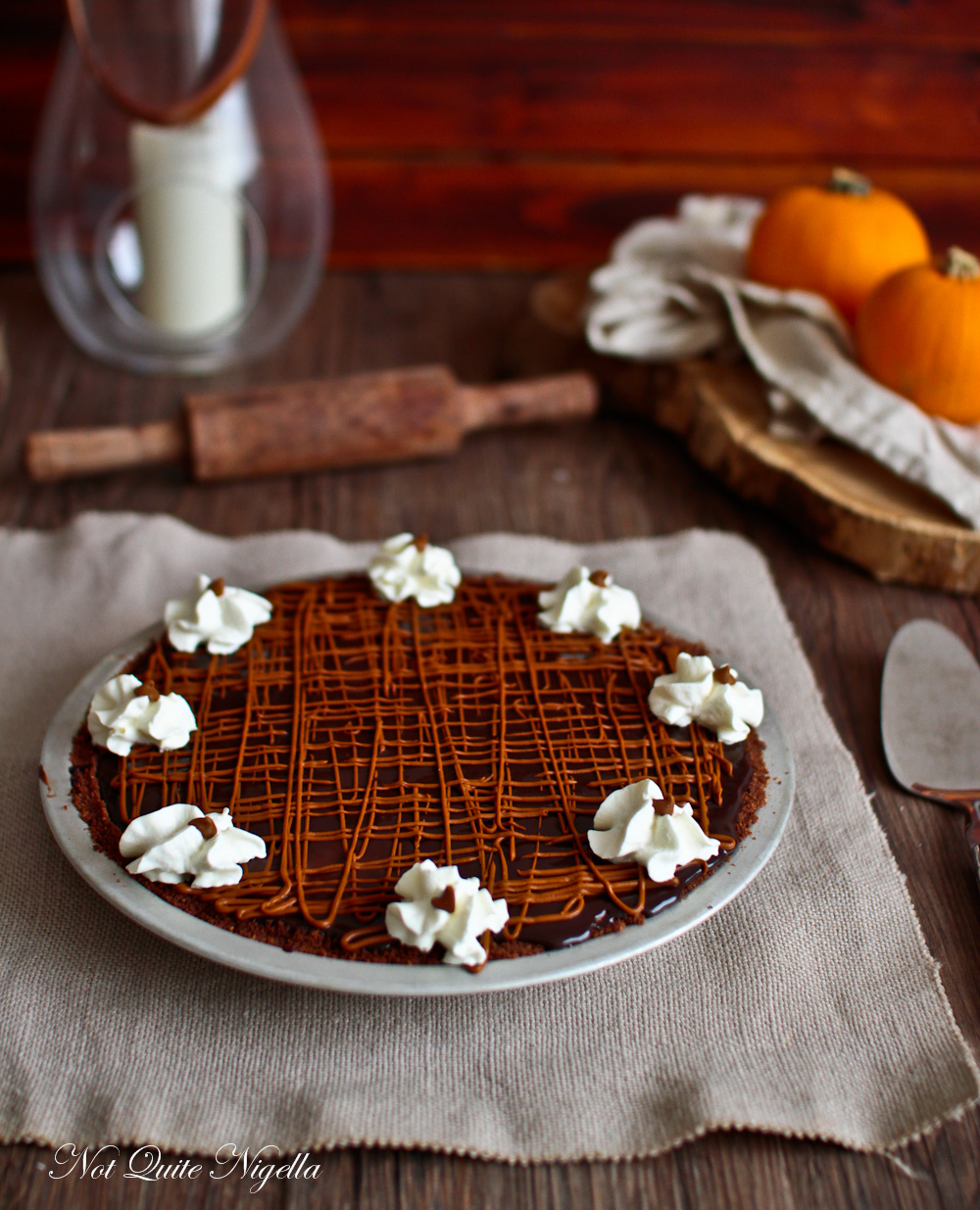 As we started eating we realised that we should go around the table to say what we are thankful for. Most of us were thankful for our health, friendships and happiness, especially given what has been happening around the world. I was additionally thankful because the turkey had turned out well - there's always a moment when I cut into a whole bird and wonder if any of it is going to be raw. Then Ringo added, "I'm thankful for my sex life!" which was the cue for Too Much Information from everyone. It degenerated from there as Miss America jokingly said that he was thankful for nothing and "screw you all!". We ended up playing several raucous rounds of Cards Against Humanity until the clock struck midnight.

So about that triple chocolate pumpkin pie...When I was watching my friend Cailin's Snapchat videos @cailinoneil, she had just made a chocolate pumpkin pie and it looked so good I asked her straight away for the recipe. It was originally from the Chronicle Herald in Canada. I was delighted that it was a "hardly-bake" pie (well just 10 minutes in the oven for the crust). The setting is done in the fridge. It reminded me of my Snickers Pie in the method but with pumpkin and chocolate.

I did adapt the recipe to make it a bit more chocolatey. Also because the weather in Australia is hotter than it is during a Canadian Thanksgiving (which is incidentally about a month earlier than the American one, on the second Monday in October) this pie needed a bit more help with structure. It was quite soft because I made and photographed it when the apartment was still boiling hot inside from the 43C/109.4F scorcher day that we had last week. 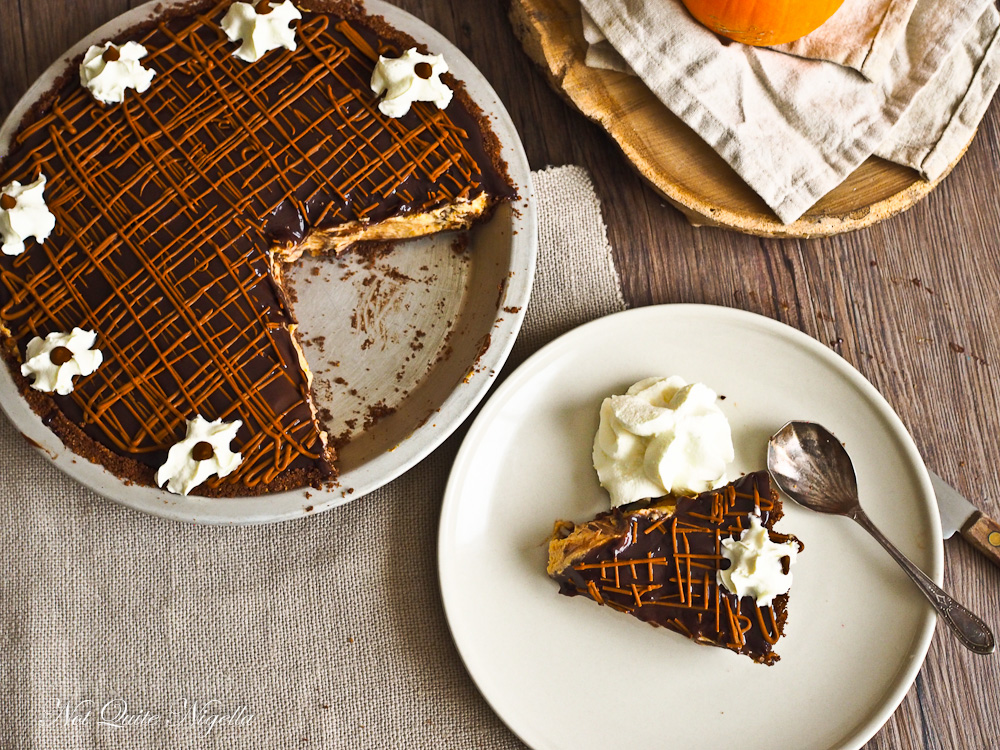 But if you've never had chocolate and pumpkin together or are hesitant about the combo, please don't be Dear Reader. This is a spectacular pie. The texture of the filling is incredibly light belieing its rich, diet eschewing name. The triple chocolate is not intense, it is an enhancer. And the crust is beautifully crunchy. If you love pumpkin spice then this light cheesecake version might be what you would give thanks for!

So tell me Dear Reader, what are the things you are thankful for? Do you like pumpkin pie? Have you ever tried chocolate and pumpkin together?

*you can use tinned pumpkin but since this is hard to find in Australia, I roast pumpkin at 180C/350F until soft, cool it and remove the skin and drain it well. You can then puree the drained flesh in step 3 below. 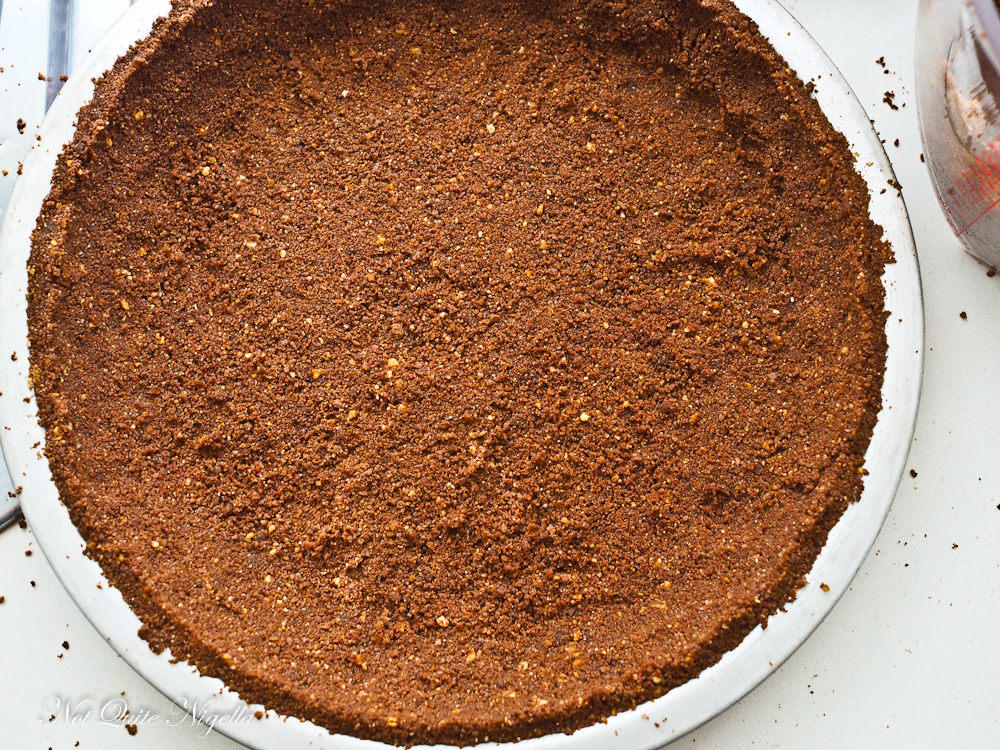 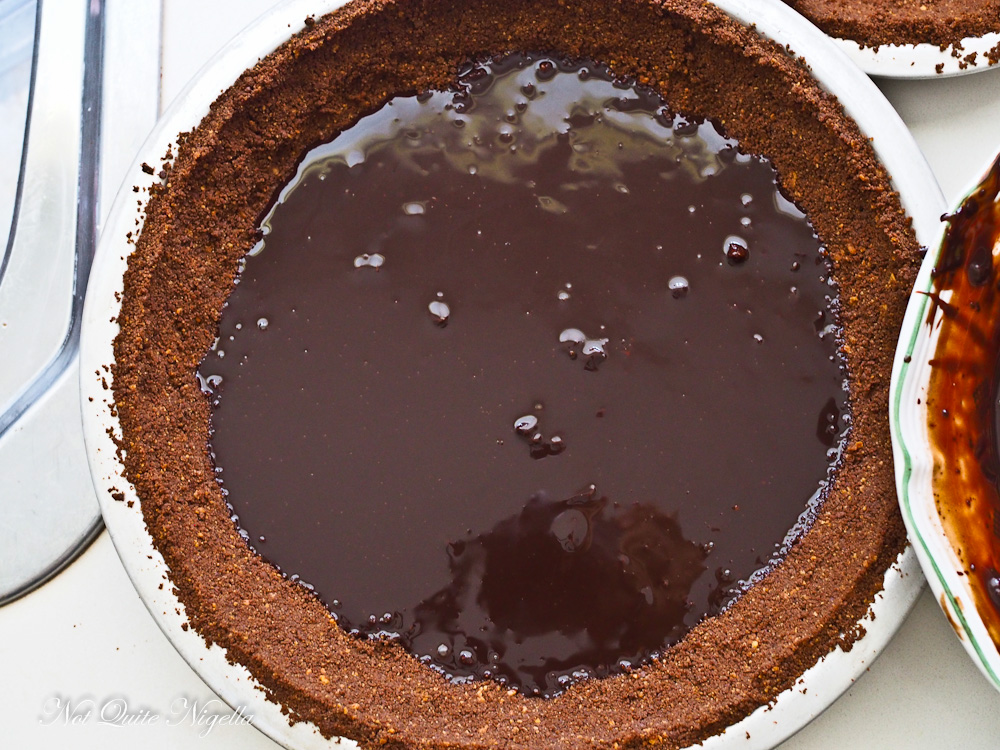 Step 2 - Melt the chocolate, butter and cream together until smooth and liquid. Pour a third of it into the cooled base of the pie tin and allow to set in the fridge. 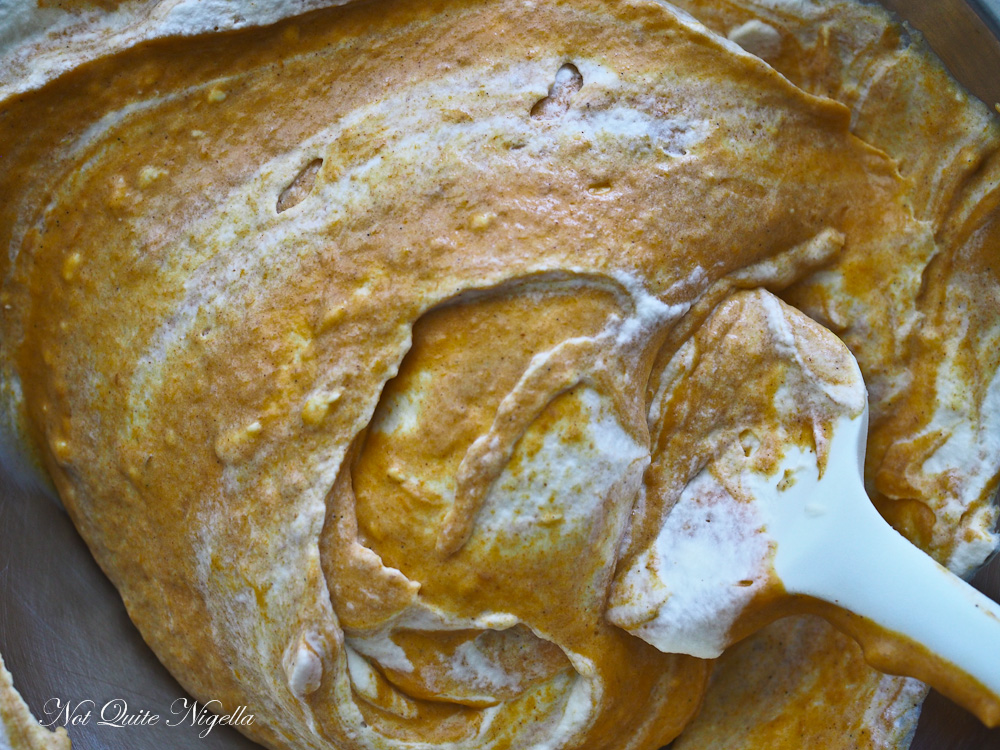 Step 3 - In a food processor, blend the cream cheese, pumpkin puree, brown sugar, vanilla, cinnamon and ginger. Empty into a large bowl. Whip the cream until you get soft peaks and fold it into the pumpkin mixture. Spoon into the pie crust. Place in the freezer. 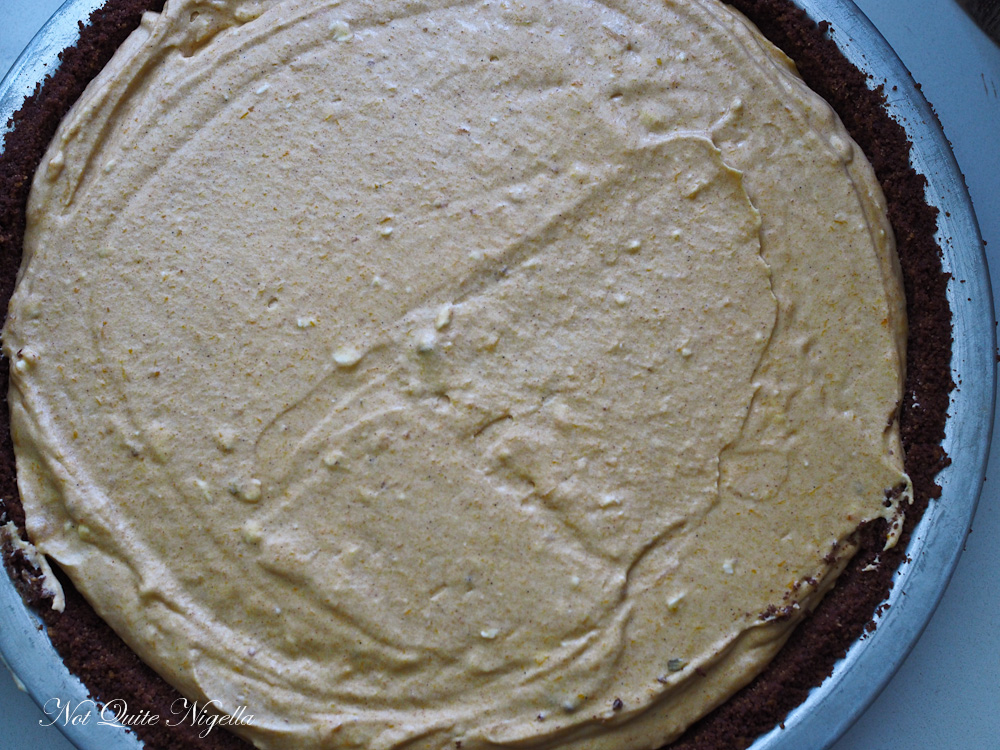 Step 4 - Melt the remaining ganache until liquid but not boiling hot. Cool it if you need to so that it is still liquid but you can dip a finger into it without it feeling too hot. Have a palette knife ready and use it to spread it across the top of the pumpkin mixture on the frozen pie. 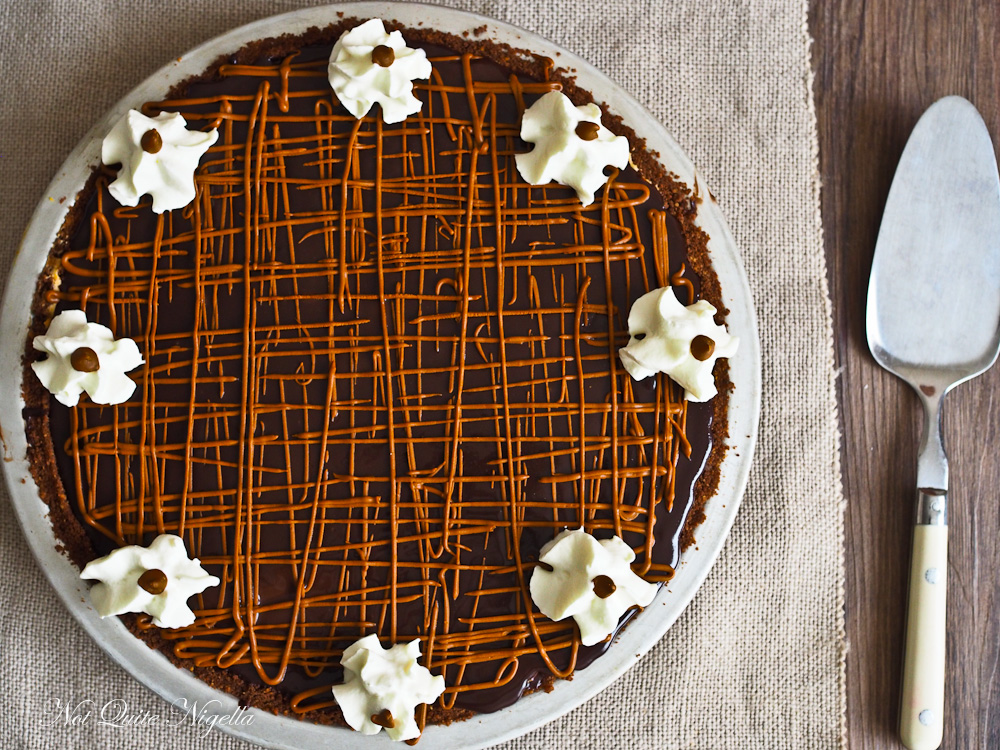 Step 5 - Melt the cinnamon or milk chocolate and place in a piping bag and snip a tiny hole at the bottom. Pipe lines in a lattice shape across the pie. Chill for a few hours or place in the freezer for 30-60 minutes to firm up. Then keep refrigerated until ready to serve.