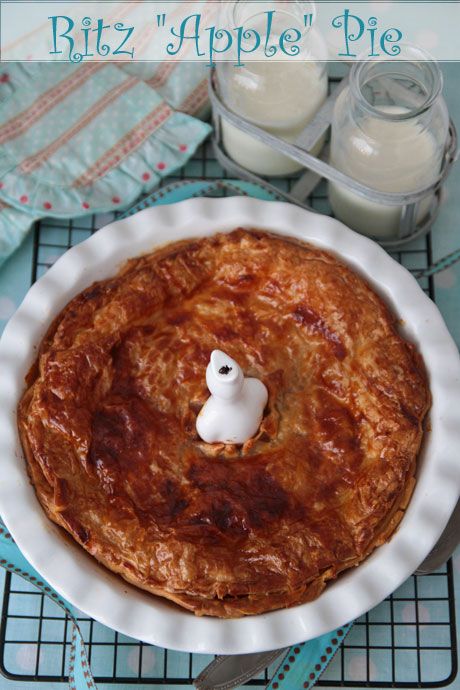 Mr NQN and I were sitting down and having dinner with my parents when he casually mentioned that he was thinking of doing the half marathon.

We all stared at him and put our cutlery down.

Swallowing hard we all asked in unison "Why?"

If there was any doubt I was their child it was all too apparent in the matters of all things sporty and expending energy. Mr NQN tried to explain to us how it was a physical challenge and that it would be an achievement to run a half marathon. 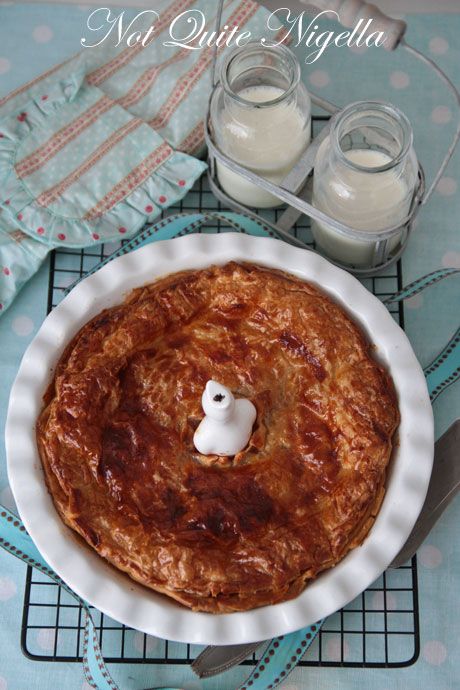 Fast forward to a few weeks later when I decided to make a Ritz cracker apple pie. I thought it was Queen Viv that had told me about it but turns out it wasn't (edited to add it was @TudorGrrrl on twitter). Well, whoever it was said that they had tried one and apparently it's quite a famous recipe. It is when the filling, an entirely apple-less concoction somehow goes from looking like crushed Ritz crackers to soft apple pie filling.

"Why are you making a mock apple pie out of Ritz crackers when we have apples in the fridge?" Mr NQN asked me

"Because I like making weird stuff and because I can" I answered (for evidence see Exhibit 1: Bacon Jam).

I was of course intrigued by this recipe. By the mere fact that somehow, slightly savoury Ritz crackers somehow morphed into an apple filling with the addition of a sugar syrup. Surely this was as close to culinary sea monkeys as you could get. And my thoughts immediately turned to who on earth discovered this in the first place and how. The many comments from people that had tried the recipe attested to the fact that somehow under that pie carapace, something happens and the crackers turn into an apple filling. Many loved the fact that it meant that they didn't have to peel and core apples anymore. 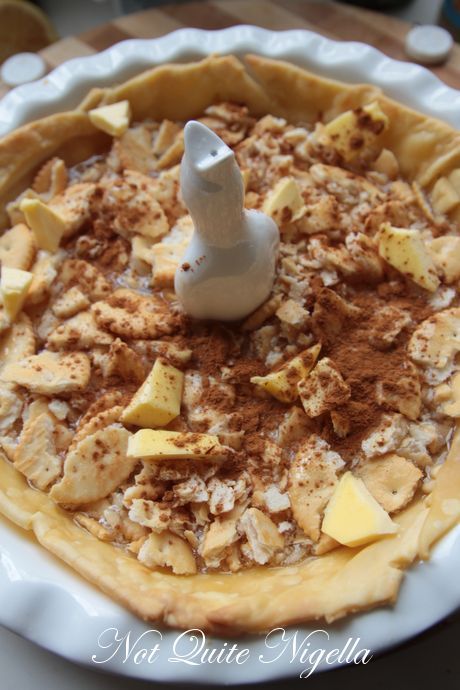 It goes from this filling...

The recipe was very straightforward. There was the pie pastry and in the spirit of utter convenience I used the pre rolled frozen stuff. I just needed to crumble the crackers and then cover it with a cream of tartar and sugar syrup and then top it with the round of puff pastry. I baked it hoping for nothing. I was even more skeptical after seeing it in its "raw" state. Once baked I took it out and sliced a piece off and dug my fork in.

I know many of you will say that you'd rather make it with apple. And of course I would too, after all there is nutrition value in apples that doesn't exist in crackers. But aren't you the slightest bit curious? I was so I dug my fork in and took it to my mouth and lo and behold it tasted just like apple! Certainly it was very sweet and very soft but give it to anyone and they wouldn't stop their fork reaching to their mouth and back to the plate. I've reduced the sugar in the recipe to 1.5 cups instead of the original 2 cups as I felt that it was overly sweet but apart from that I wouldn't change a thing. It is calorific though and that is one downfall but it is perfect for someone running a half marathon. I told Mr NQN that I would be cheering from the sidelines with a slice of Ritz cracker ...ahem apple pie in one hand.

So tell me Dear Reader, do you like making odd recipes or do you stay safe with recipes? And if you do try unusual things, how does your family feel about them? 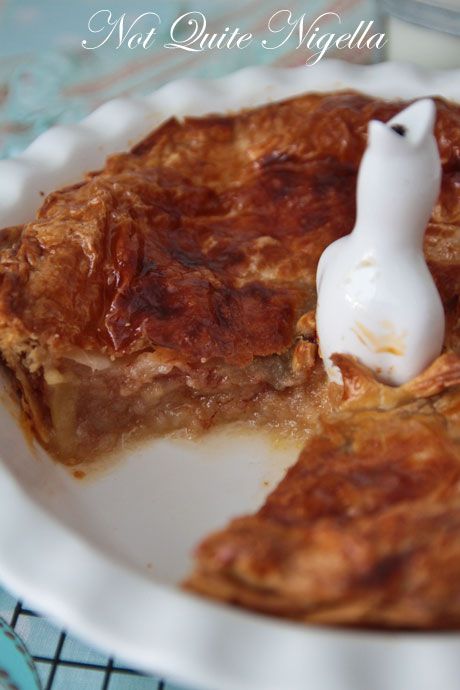 Recipe adapted from the Kraft site

Step 1 - Preheat oven to 220°C/425°F. Place a sheet of the shortcrust pastry in a greased 9-inch pie plate. Place a sheet of foil on top of the base and fill with dried beans or ceramic weights and bake blind for 15 minutes. Remove from oven and allow to cool. Take our foil and beans and weights and place cracker crumbs in the crust and set aside. 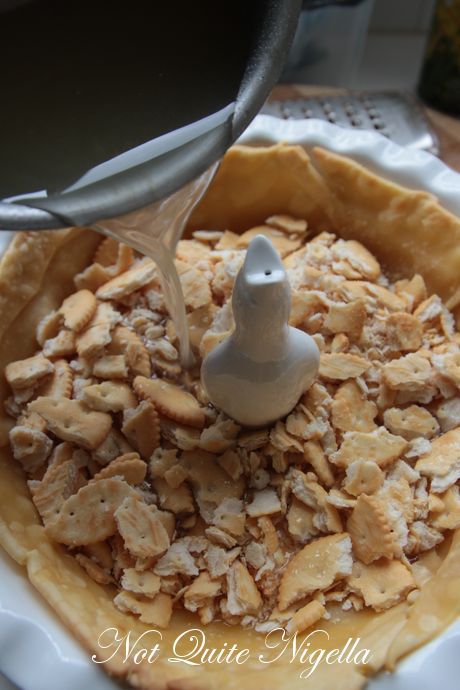 Step 2 - Mix the sugar and cream of tartar in a medium saucepan. Gradually stir in 1 3/4 cups water and stir until well blended. Bring to boil on high heat. Reduce heat to low and simmer for 15 minutes. Add lemon peel and juice and allow to cool. Pour the syrup over cracker crumbs. Dot with butter; sprinkle with cinnamon. Cut out a circle of puff pastry to fit on top of the pie and place over pie. Trim; seal and flute edges. Slit top crust to allow steam to escape or use a ceramic pie bird as I did. Brush with the egg yolk mixed with water. 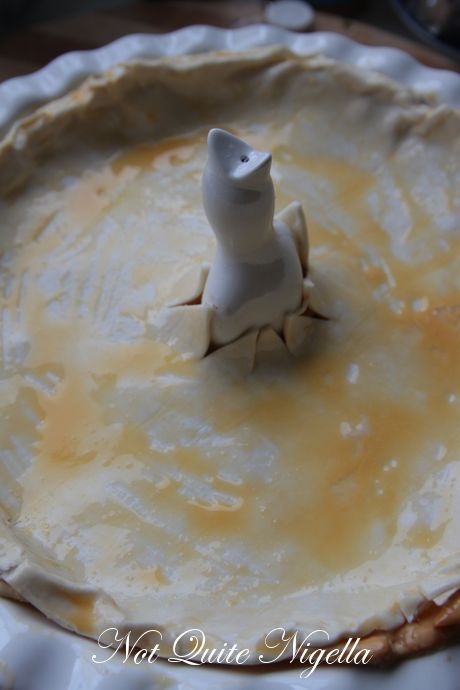 Step 3 - Bake for 30 to 35 minutes or until crust is crisp and golden. Cool completely. 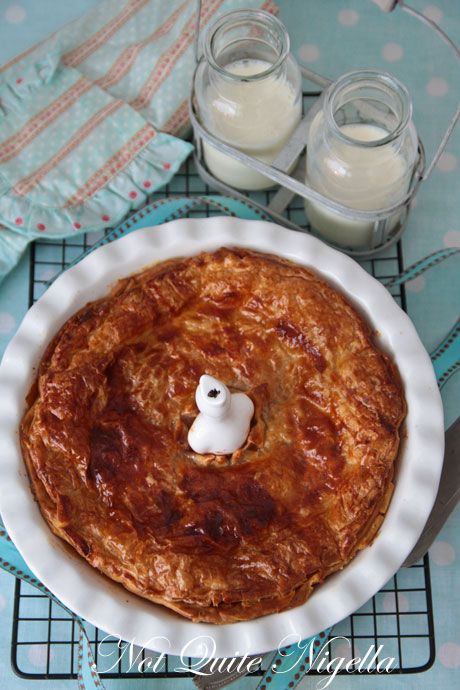