A 'Lil Bit of Texas in Sydney: Bovine & Swine, Enmore 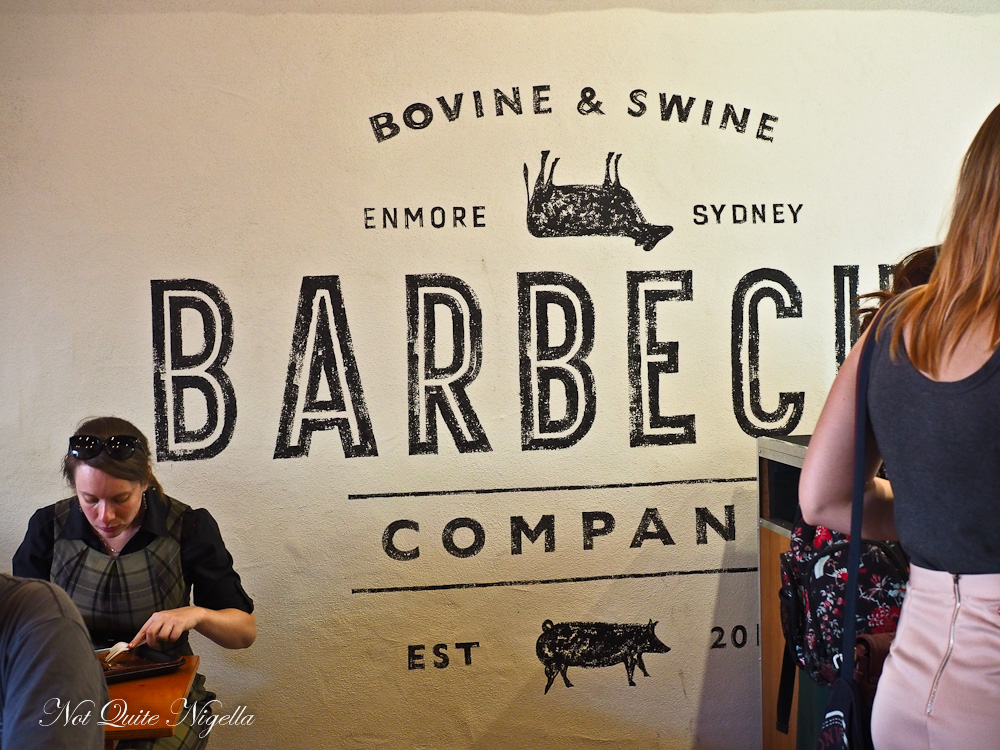 In Texas they say that barbecue is in the blood. It's an obsession that stays with you. It's something that you spend hours labouring over, it's something you tinker or experiment with. I'd also say that that is true, although I'd make an adjacent point that barbecue is also in the air. That is, that sweet, smokey aroma of the cooker that perfumes a section of Enmore Road as we walk towards Bovine & Swine. 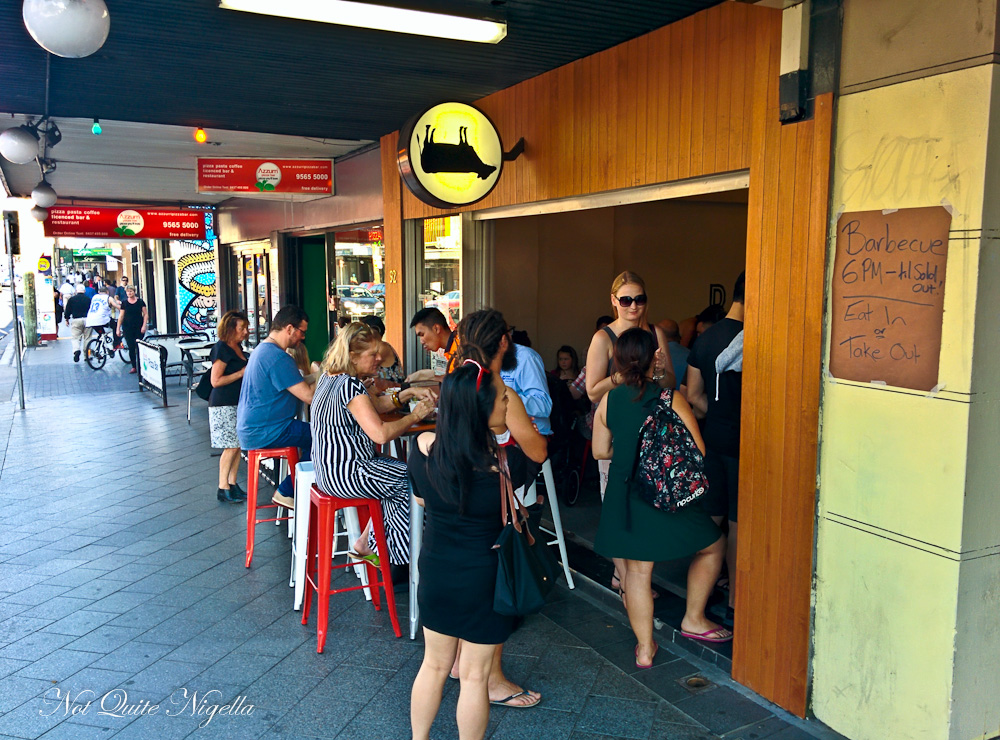 Bovine and Swine is the latest American barbecue eatery to hit Sydney. And it is best to get in early because Sydney is in the midst of having a love affair with American food. There have been many that have been turned away because the barbecue has sold out. As the signs say "From 6pm until sold out."

Anton Hughes and Wes Griffiths are busy at the counter and they take orders with a Southern style friendliness. They are formerly of Vic's Meat Market in Pyrmont. Making up the trio is Tim Chillingworth from Faster Pussycat vintage store. The process of becoming a Pitmaster for Anton, "was just through wanting a better barbecue for myself," he laughs, "I wasn't happy with the old gas three burner backyard situation and it evolved eventually from charcoal to wood to offset smoking and doing that for family and friends. Wes had a similar story. He fell in love with it through a trip to Texas." 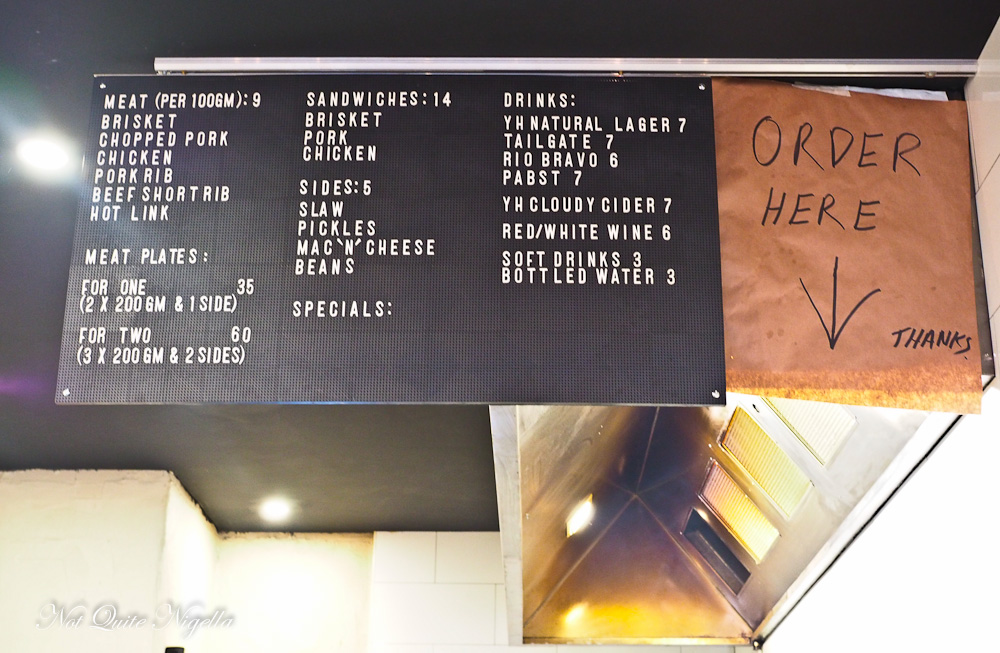 Their low and slow way of barbecuing uses ironbark, an Australian native hardwood. "We can't use oak, mesquite or hickory here so this is the closest thing in flavour. It's got a good nice clean blue smoke also at the back end of it it burns really clean. There's not a lot of ash and charcoal left," says Anton. The day starts early too, "We're here from 5am in the morning putting the meat on which means that we can oversee it ourselves the whole time. It's a long day for us as service is at 6 o'clock," says Anton before adding, "We're actually having a really good time. It's a long day you've got to humour yourself." 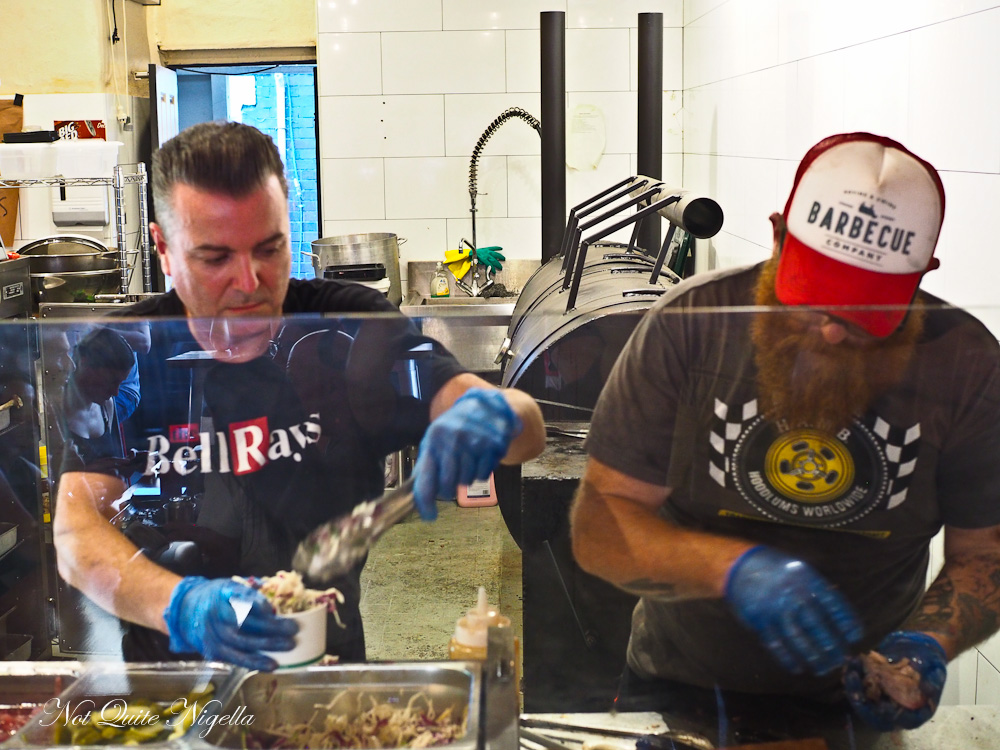 I want to try a bit of everything so I order 100 gram portions of everything except for the beef short rib as that's an enormous beast. There's a sound of satisfaction as Wes measures out something exactly to 100grams/3.5ozs. and they take their time cutting and slicing things with care. Arriving at 6:15pm meant a bit of a wait of about 20 minutes although the queue does ebb and flow during the night. 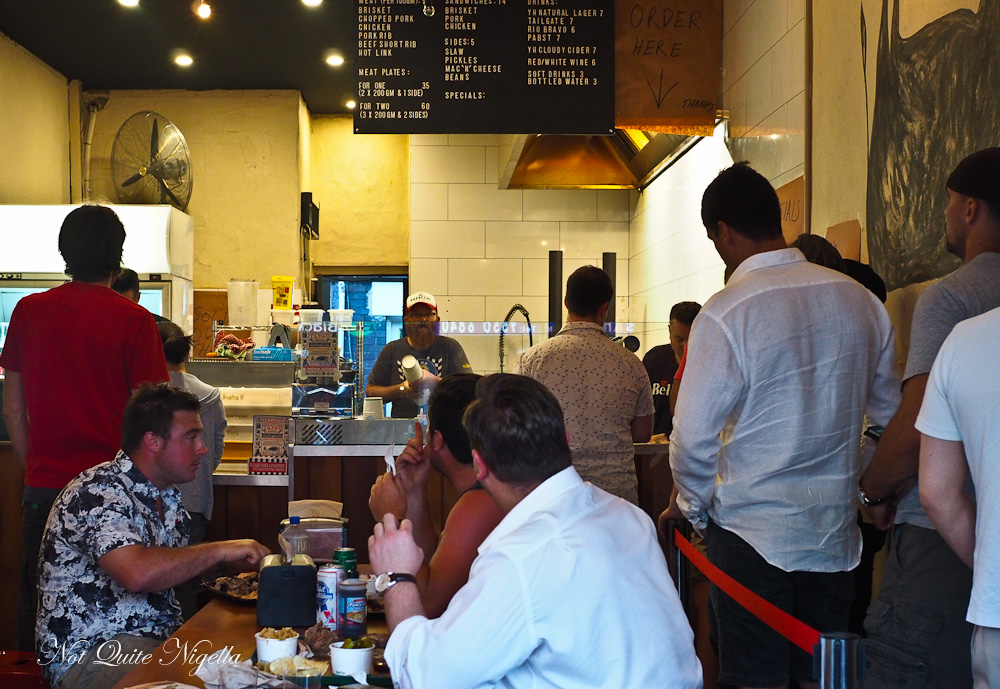 Everything is placed on a tray on a sheet of butcher paper American style with potato chips, pickled onions and a tub of their home made barbecue sauce on the side. This is important stuff everyone, this is great barbecue sauce and you can dip all of the meats in this and it works perfectly.

I also buy a couple of drinks - the list is American including Tailgate and Pabst beer but an Inner West favourite also sneaks in with Young Henry's. The Big Red is creaming soda but I go for the Barq's root beer - it's been too many years between them. I make two trips to take the tray to the seats that Mr NQN is minding. 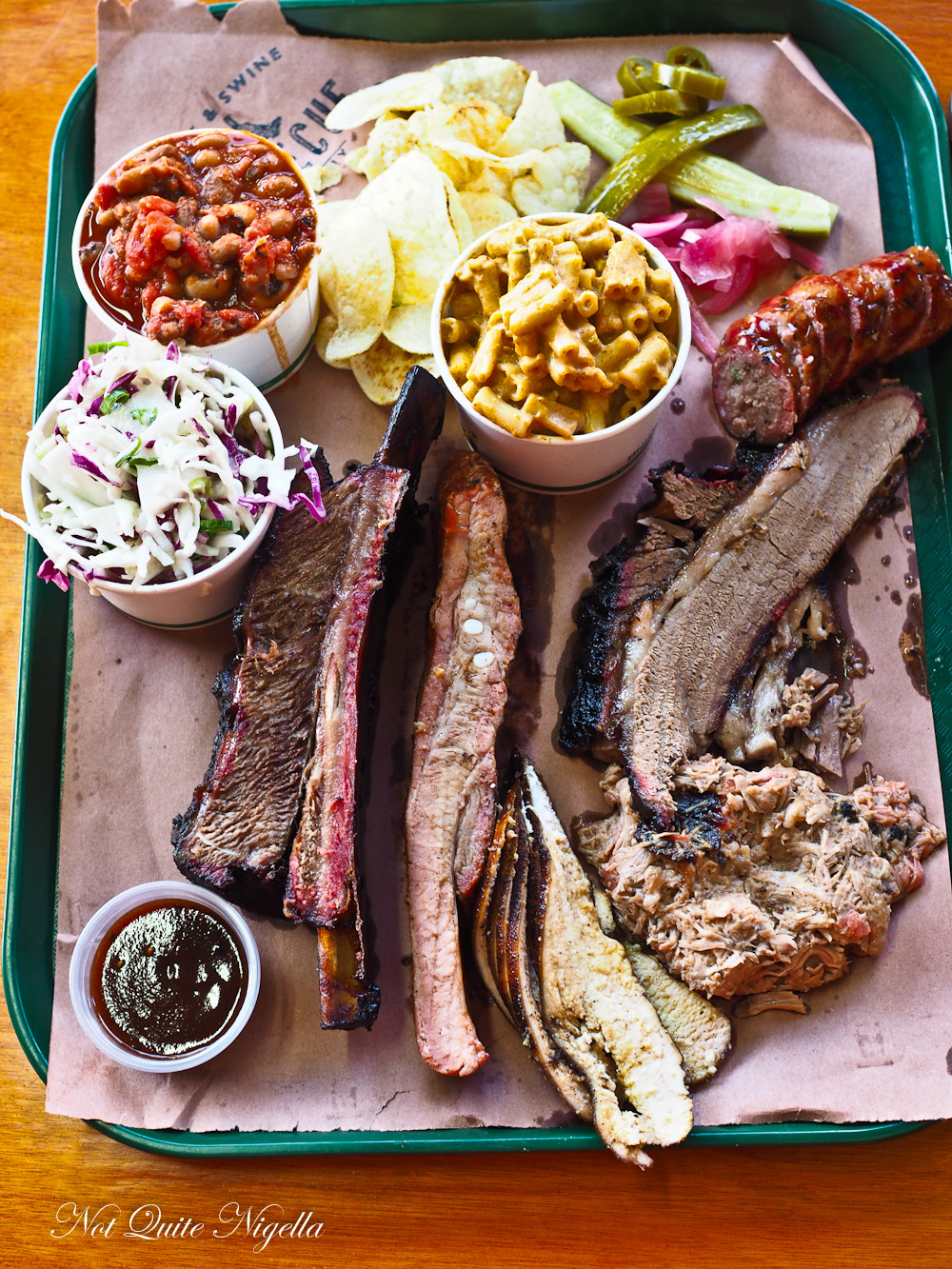 We start on the meats. The brisket, the quintessential Texan barbecue item comes as two slices: one lean and one fat. In Texas they ask which you would like but here it is one of each. The lean is good but of course the fat is where the texture comes into play, that soft slice with fat laced throughout it pulls apart beautifully. That's what the sign "No Teef Beef" is for. Anton explains that the beef is Angus marble score 3 and smoked low and slow for 12 hours and then rested. "With the brisket it's just salt and pepper and we let the smoke do the rest of the work. We pride ourselves on the bark. A lot of places don't really think about it they just want to cook it quickly so they wrap it in foil which is called the Texas crutch and then you lose your bark. Bark is very important to us," says Anton.

The chicken breast is thinly sliced and is moist in texture and with a nice hit of chilli via the coffee and cayenne rub. This is Mr NQN's favourite. Anton says, "The chicken's been the big surprise for us. We sort of put it in as another white meat to have on a plate. I don't know if word got out somehow. We're a bit miffed (laughing). Chicken is one of the first things we sell out of. We're doing almost 8 kilos of chicken in the morning. It's great don't get me wrong but it caught us by surprise."

The Carolina chopped pork, a deliberate departure for the ubiquitous pulled pork is full of flavour and much more satisfying than a lot of pulled pork that you can get. Pork shoulder is cooked but for not quite as long a a pulled pork so that it retains the natural pork flavour. Before serving they add the Carolina sauce, a vinegar based sauce with ketchup, brown sugar and white pepper. 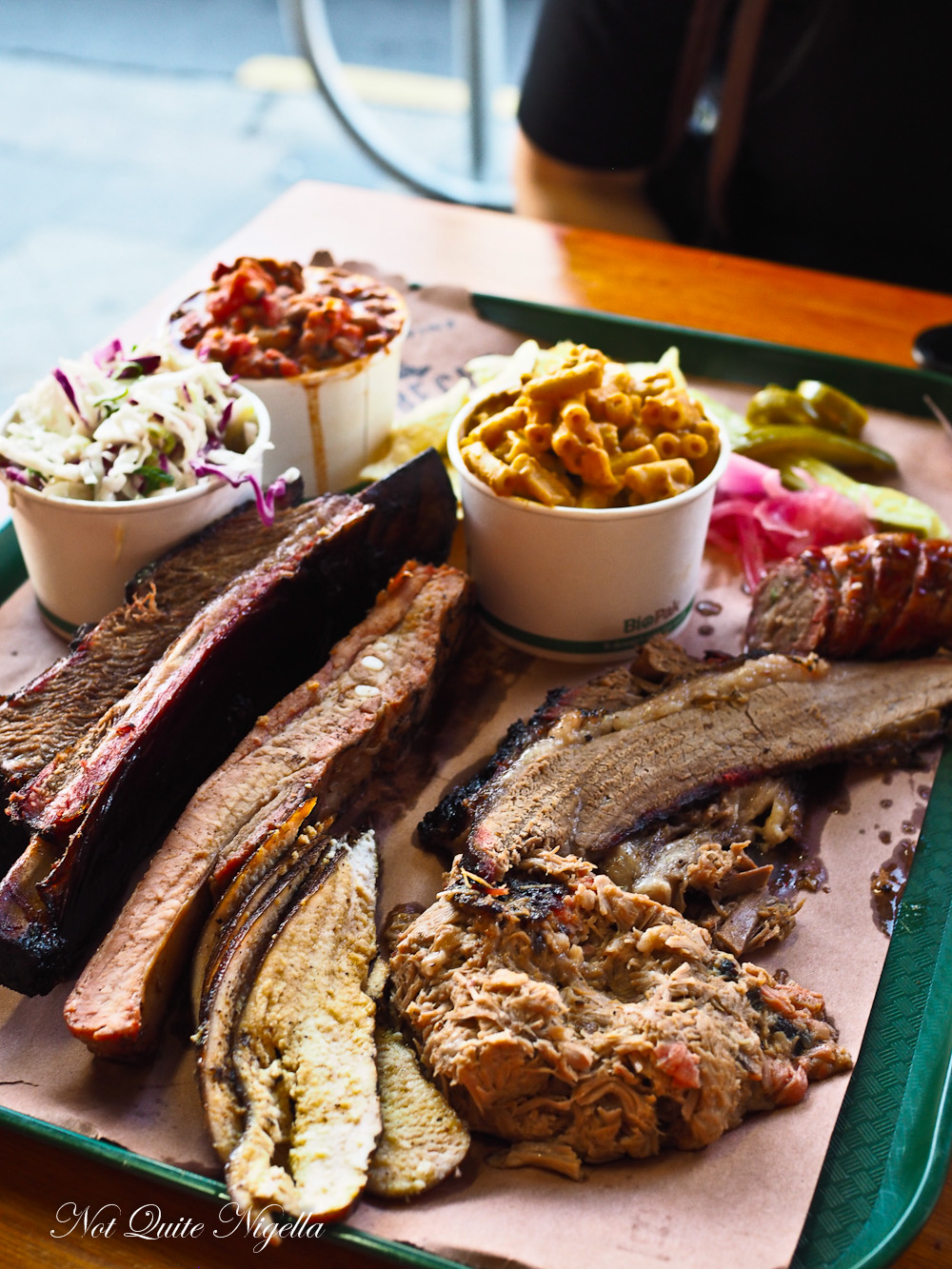 Then I go in for the beef short rib. This is a 300 gram monster and at $27 it isn't cheap because it is mostly bone. But it is so succulent and tender you don't tend to fret over it. This and the fatty brisket are my favourite cuts, the latter with a juicy edge of "bark" or that sweet heat induced caramelisation of black crust.

Anton explains, "The short rib is another passion of mine that I'd been working on for a long time a Vic's. I did a really nice short rib over there which I was really proud of. When we opened this place I thought s^&t how am i going to better that? So a blessing in disguise was that we didn't get to open when we wanted to here so we were about a month behind so in that time we were developing new rubs. I started working on a coffee based rub. It doesn't taste like coffee, it's almost chocoately, it helps that crust. When you're cooking for that length of time the smoke takes over (the taste of coffee)."

The hot link is half a juicy sausage - I think it could have a bit more jalapeno but then I'm a chilli nut. The only one that we don't tend to go for is the pork ribs. This is more muted and less juicy than the other cuts.

The sides are Southern with their own twist - in the South they can be tooth achingly sweet and remind more of dessert than a side but here they are not. There is a coleslaw with red and white cabbage and a tangy dressing, smokey mac and cheese with broccoli (a twist that a Texan might find odd) the smoke courtesy of a smoked cheese and smoked paprika. Last but not least is the spicy chilli beans made with black eyed peas and tomato and a nice hit of chilli. The pickles are all made on site and the pickled jalapenos are fiery hot and crunchy and the pickled cucumbers cooling. 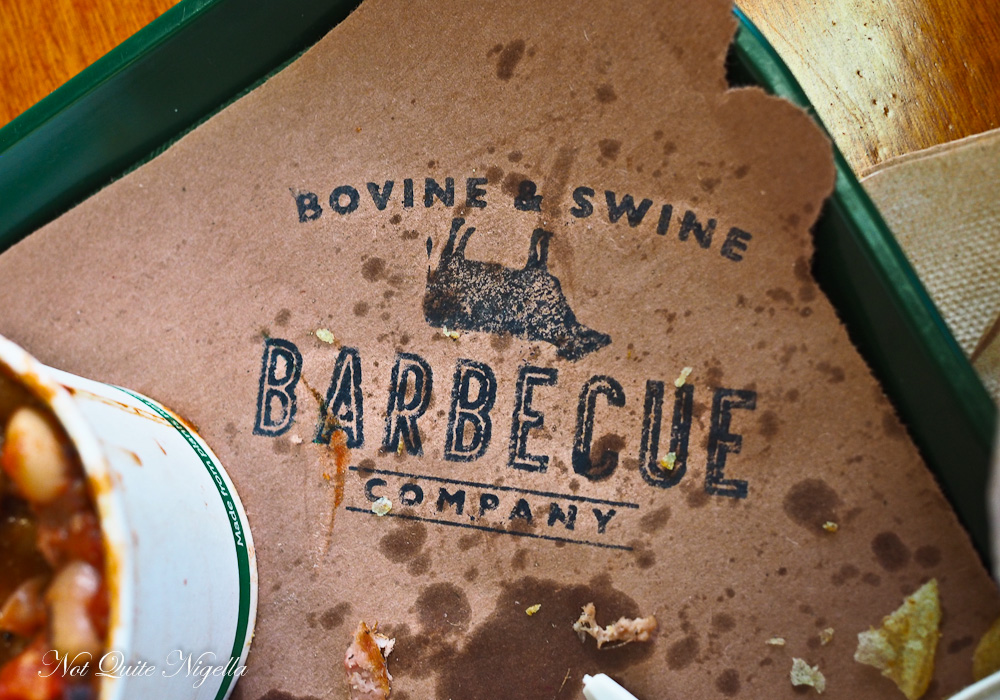 There's no dessert here but given the crowds, it's probably best not to linger. We can't finish everything as the meal is deceptively filling so we get some takeaway containers and take it home. Because when meat is lavished with such attention, you don't just throw it out!

So tell me Dear Reader, do you have a favourite meat that you go for with barbecue? And do you prefer lean or fat brisket?