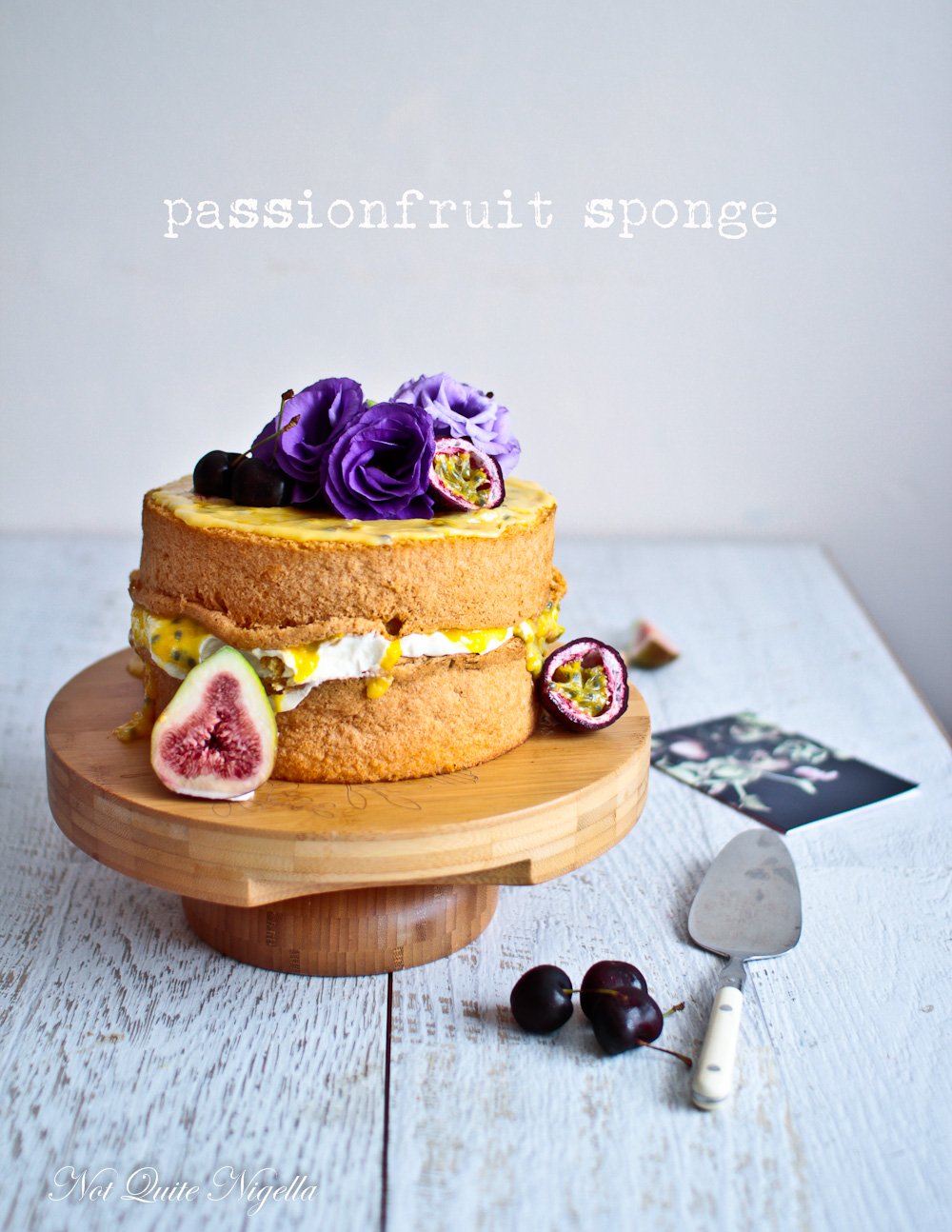 Okay it's a bit retro but along with a newfound obsession with pickling, I have also developed a massive obsession with sponge cakes. There is something about these glorious, sky high, light layered beauties and when you spread them thick with whipped cream and passionfruit curd and top them with the very best passionfruit icing then things get a whole lot of delicious!

There's also something enormously appealing about a cake that is several inches high and light as a feather. There's a challenge to a sponge too. It's really all about cake alchemy - the simplest of ingredients transform into something more magical than the sum of its parts. And given how much passionfruit we have been buying and eating lately, a passionfruit sponge would be the perfect flavour, especially for Valentines Day coming up.

There are lots of different sponge types (Victoria, Chiffon, Genoise, Castella, Biscuit, Swiss Roll, Angel). Confusingly this isn't any of these - this has very little fat and the eggs are used whole. I like this sponge recipe for that very reason because I didn't want extra yolks or whites. The topping is that delightfully easy but delicious passionfruit topping that you get on top of vanilla slices. I decorated them with lisianthuses, cut figs, passionfruit and Tasmanian black cherries trying to mirror the effect of the yellow and dark purple passionfruit. Choose whatever fruit or flowers you like really :) I decided to call this cake Violet, for obvious reasons. 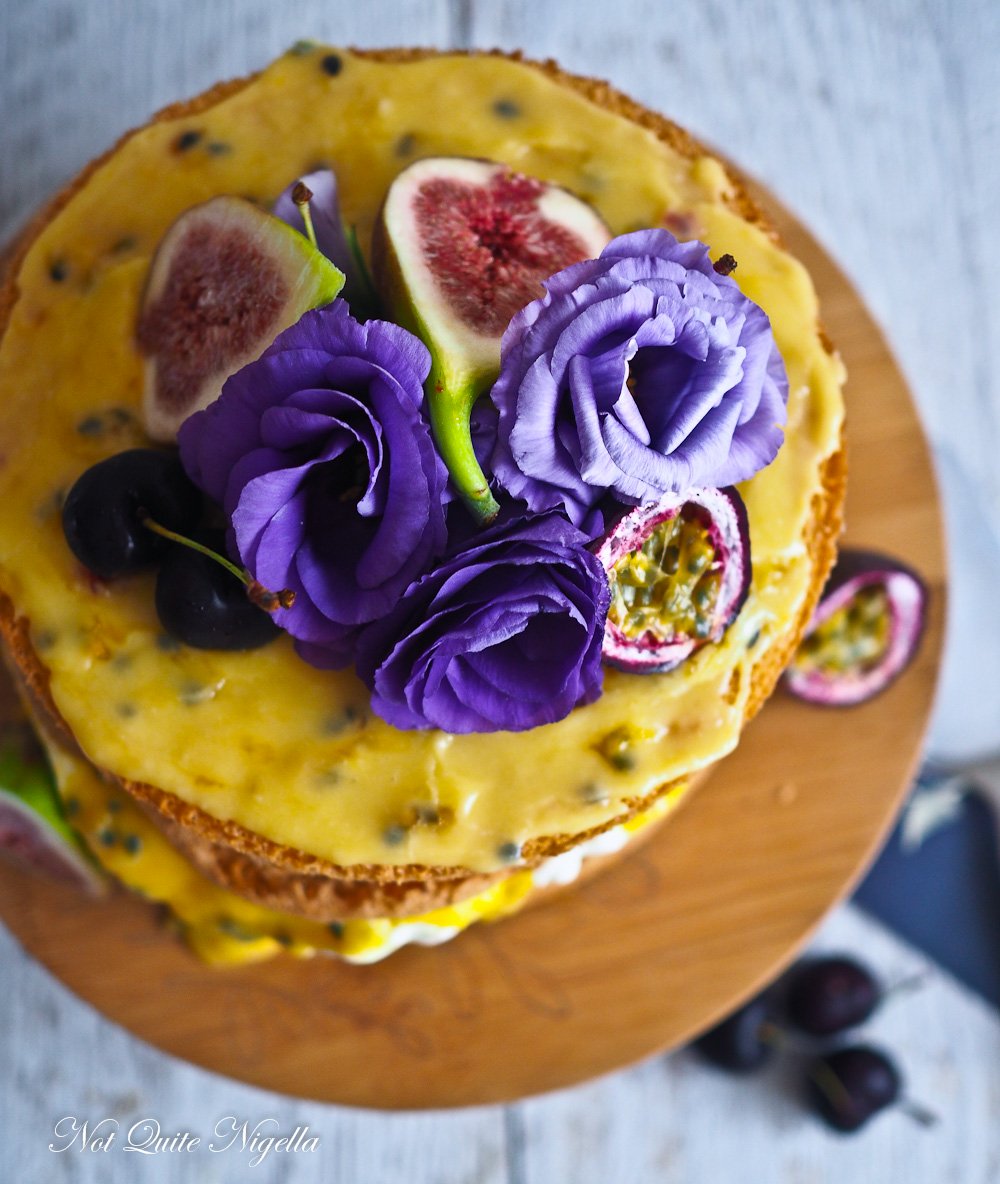 Dear Reader, you know how I like to keep it real with you. Well the other day Mr NQN and I had a massive fight. Like a really tense, hissing, scathing fight. It was also 10 minutes before we had to step into a party at a friend's house too which wasn't ideal.

It started with Strava, a site where cyclists and sporty people log in the details of their daily runs and rides. I can't generally talk to him for the first minutes after he arrives home because he is busy putting in his strava details. That's fine, when he comes up for air I usually ask him where he has cycled to but I don't really like to look at it on Strava because it's really a squiggle on a vague map. I'd rather hear about it. 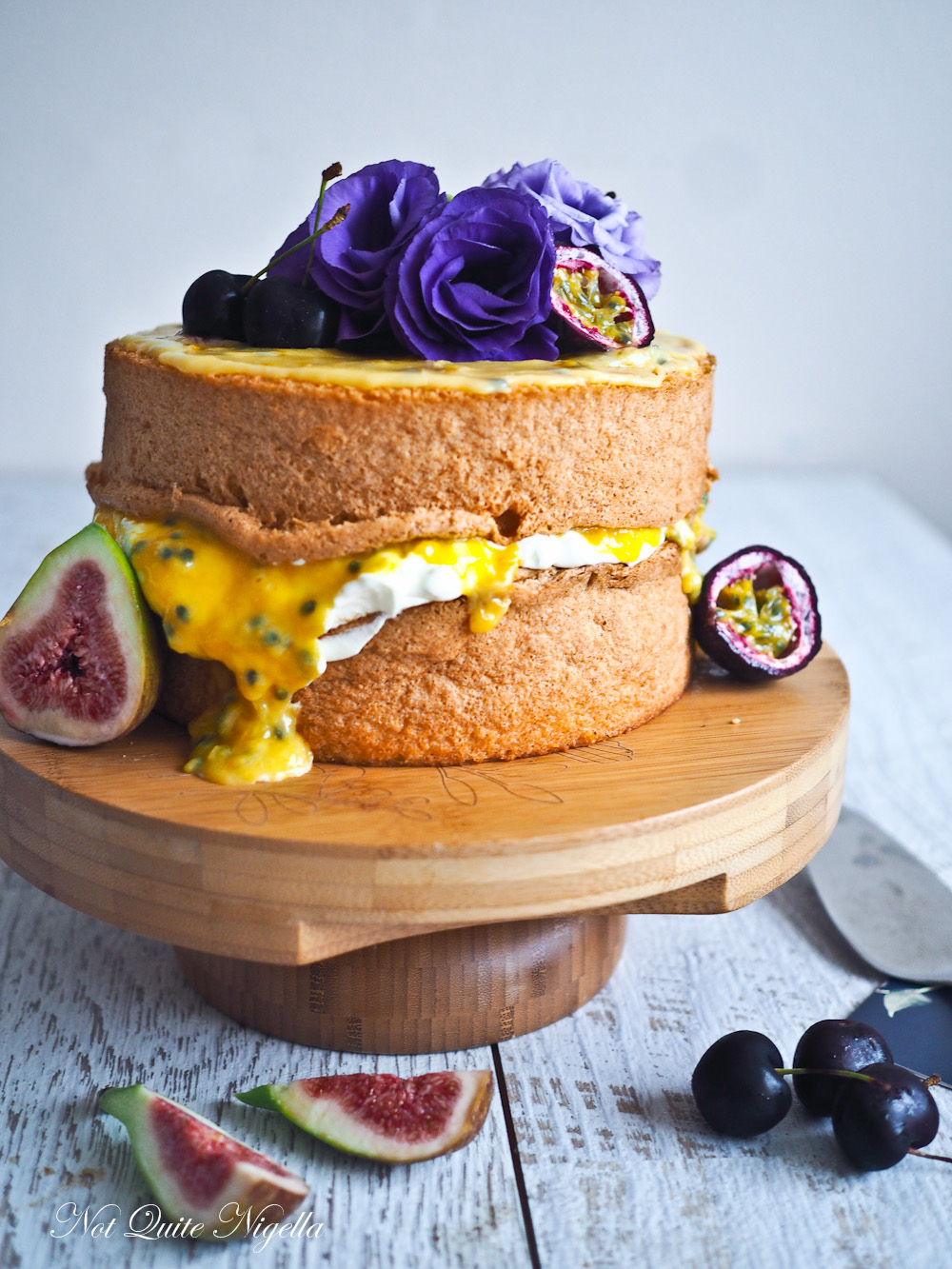 When we were driving to the party he said, "Oh Ringo went for a run this morning," (Ringo being Belinda's boyfriend). "Do you want to know where he ran?" he said.

"No, not really," I said, because I really didn't. Perhaps I should have seemed interested but where he ran wasn't that interesting to me.

"Well sorry but MOST of what you say isn't interesting to me!" he said. 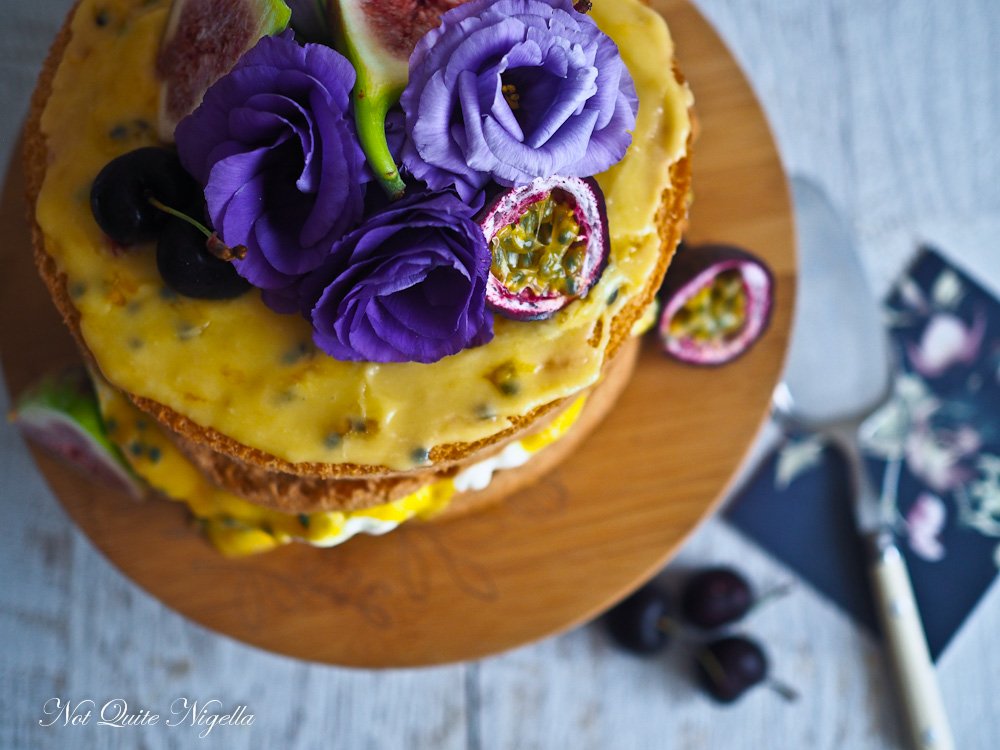 I know I go on about food but it turned out that apparently I talk about food way too much and Mr NQN just isn't interested in it. I was rather devastated to hear this and it turned into a full blown argument. He ended up saying that it was fine with him that he didn't care about food and I didn't care about his strava and that's what happens when people who have different interests get married. But I was concerned. I mean I was concerned because I have no plans to become more interesting and talk less about food! I mean I am mid-sponge cake mania!

So tell me Dear Reader, do you find most of what your partner has to say interesting? What is your current obsession? And did you know that in Hawaii they call yellow passionfruit lilikoi? 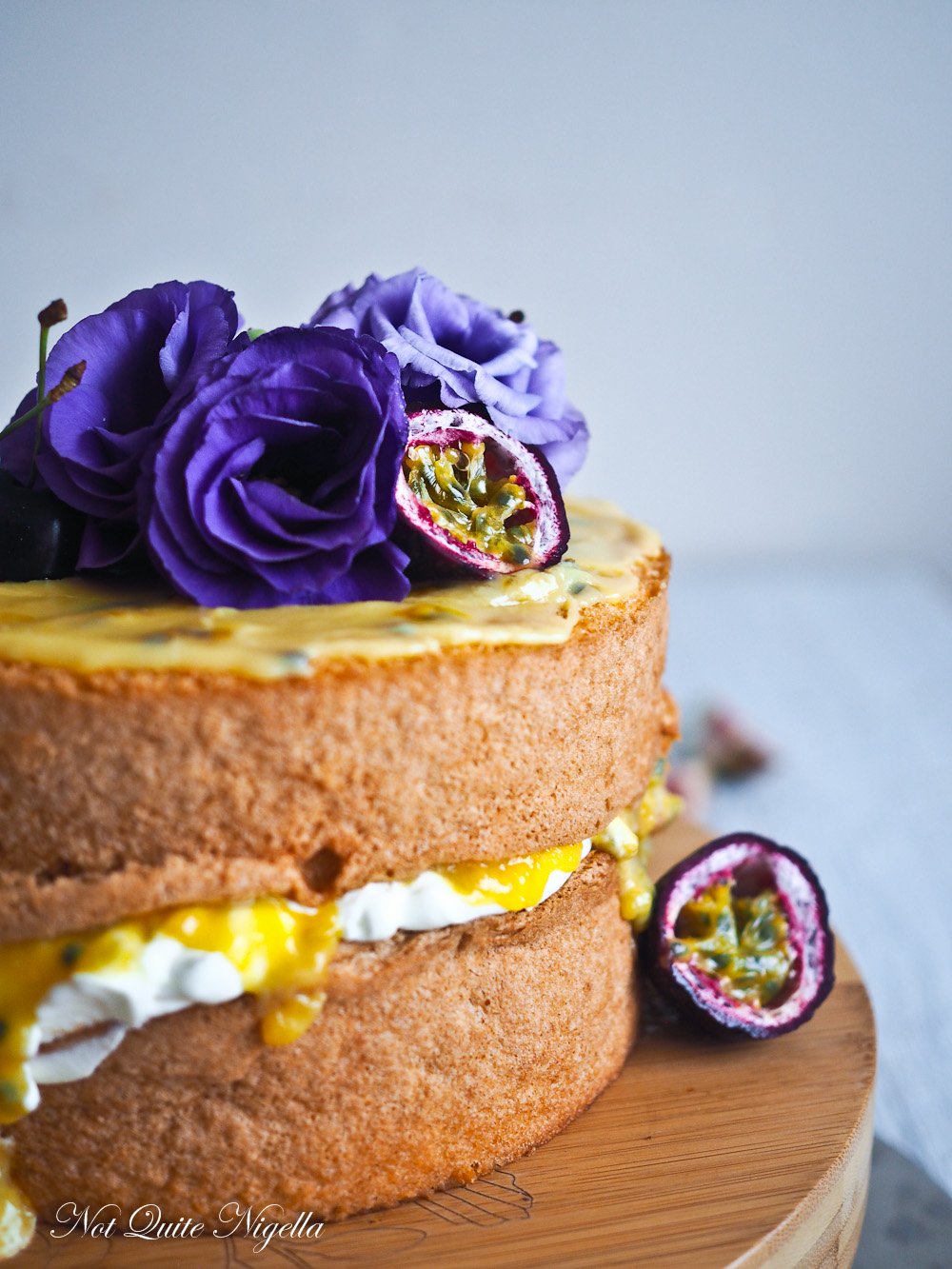 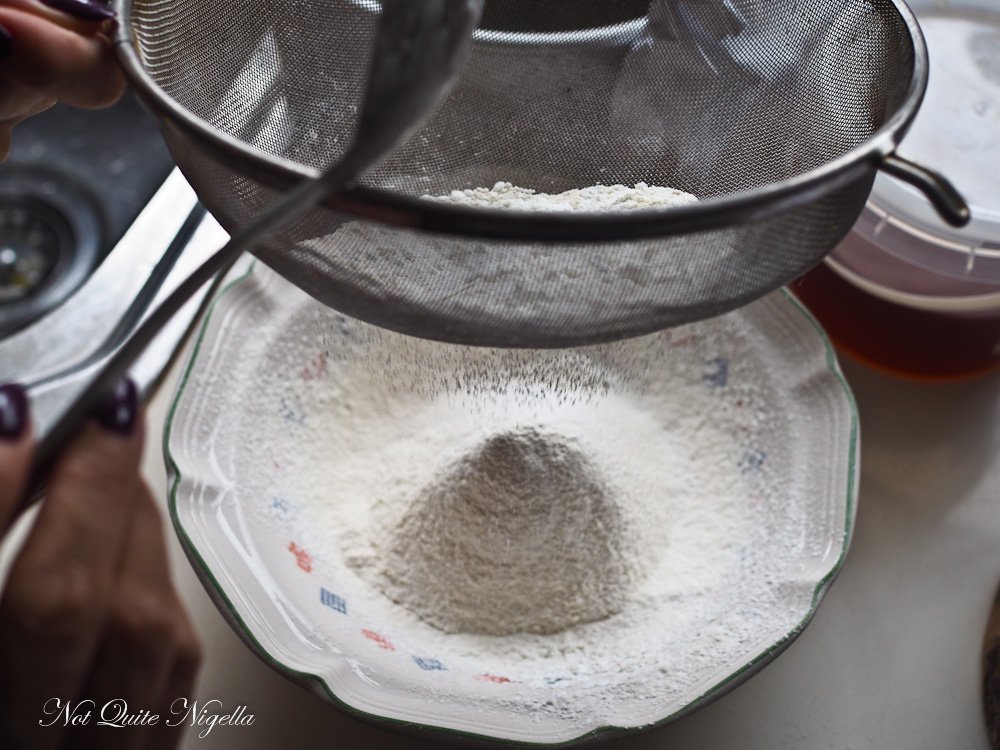 Step 1 - Preheat oven to 180C/350F. Line the bases of 2x 20cm/8inch round tins with parchment. Grease sides with butter or oil spray the sides. Sieve the flour, cornflour and baking powder three times at a height by tapping the side of the sieve (rather than pressing the flour against the sieve's base). Set aside. 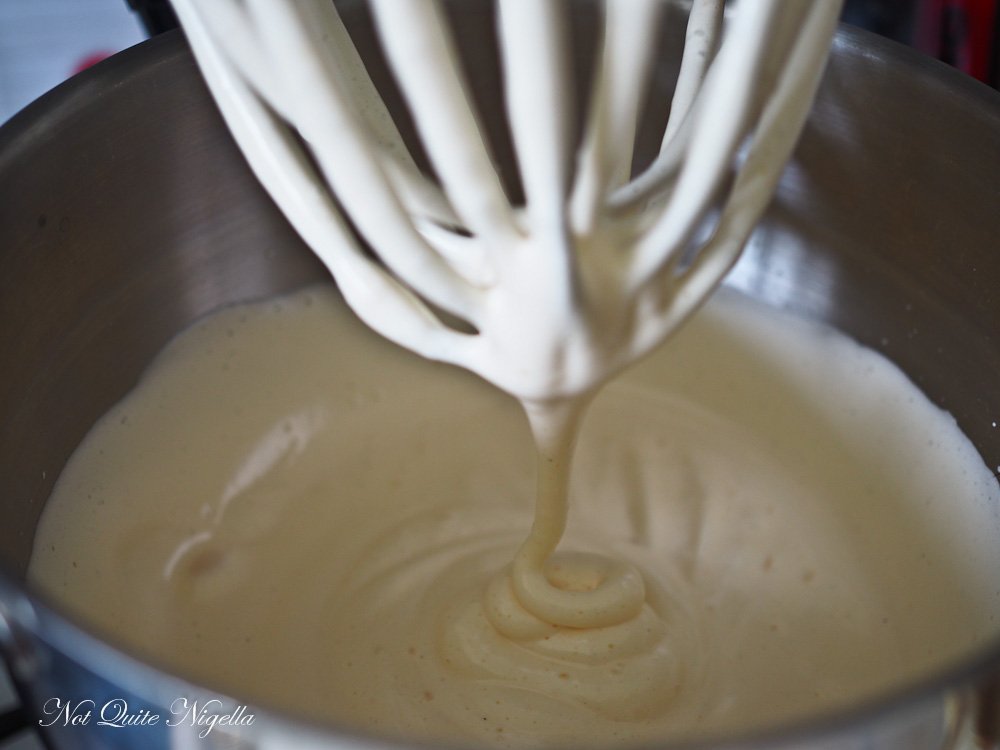 Step 2 - Place the eggs and sugar in the bowl of an electric mixer and whisk until triple in size. I whisked it on the maximum speed of my Kenwood for 5 minutes. Using a large metal spoon, fold in the triple sifted flour mixture making sure to incorporate it well (some does tend to pool at the bottom). Drizzle in the oil and vanilla and fold this in too.

Step 3 - Divide evenly into the two tins and bake for 30 minutes. Cool in the tin and then run a butter knife around the sides and remove from the tins. You can bake these 1-2 days ahead of time and just wrap them in cling film and store in an airtight container. 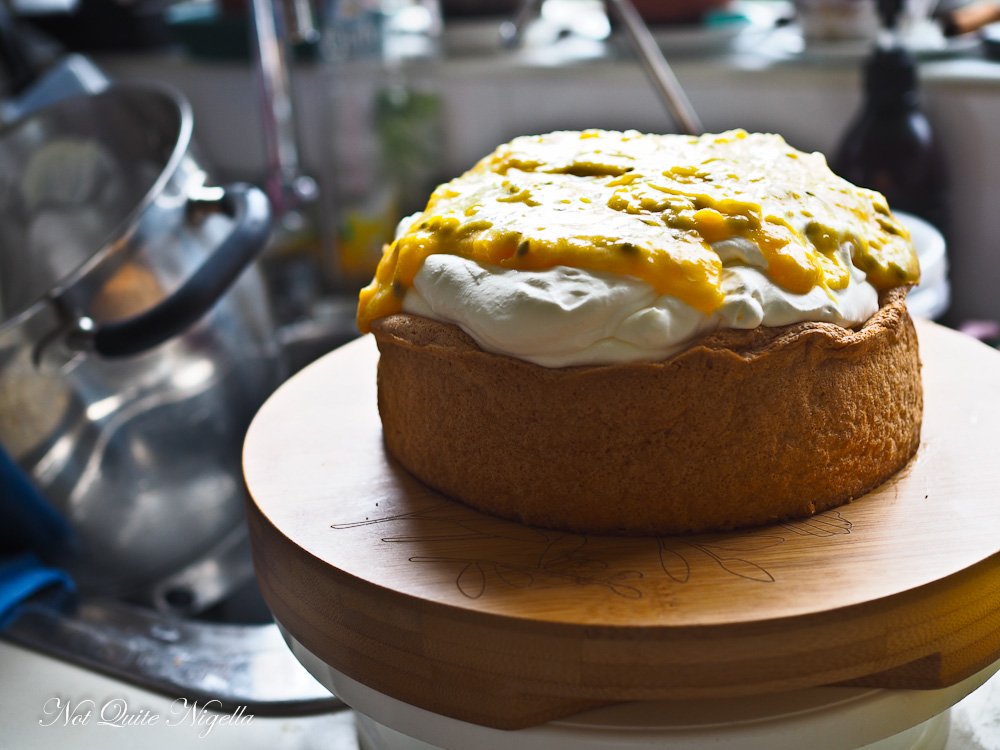 Step 4 - When you are ready to serve it, whip the cream and the sugar until soft peaks form. Place one cake tier on a serving plate and spread the cream on top. Then spoon over the passionfruit curd. Add the second tier on top with the bottom facing upwards (the smoothest side). 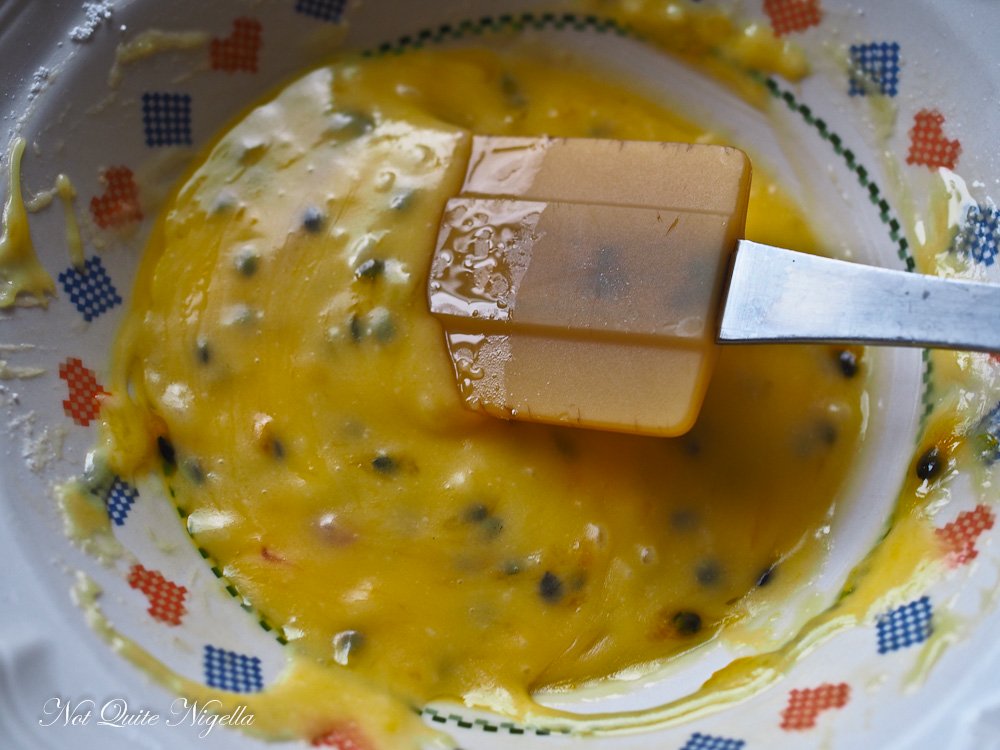 Step 5 - Make the icing by adding the three ingredients into a microwave proof bowl. Heat on 100% power for 30 seconds. Stir well and then heat for another 10 seconds at full power until melted. Mix well and spread onto the top of the cake. 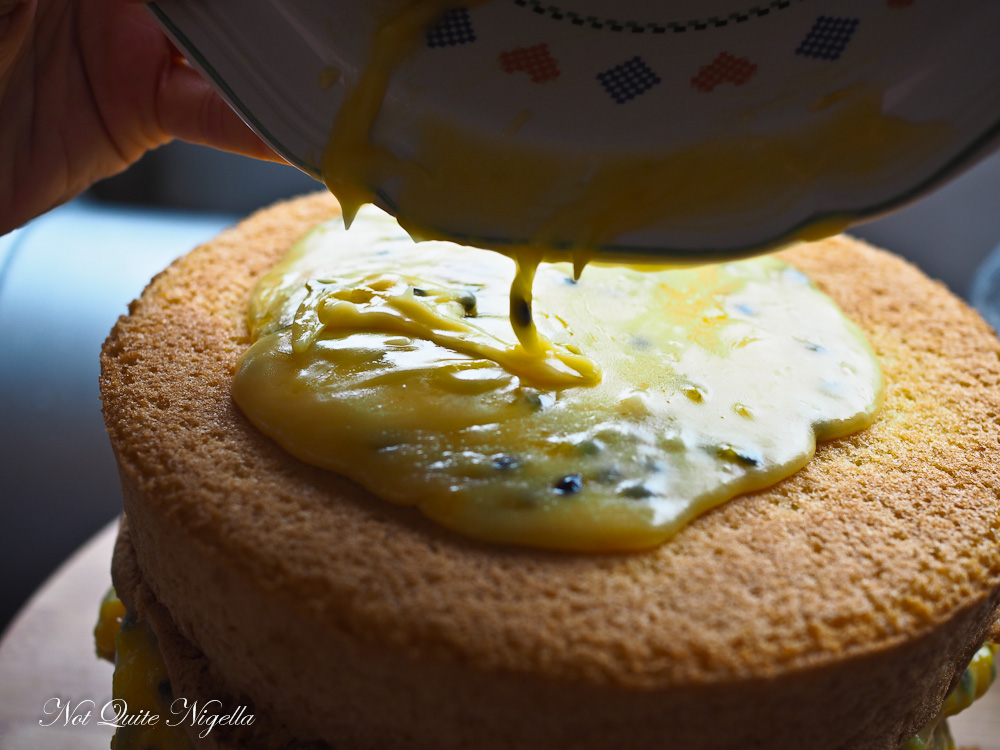 Step 6 - Decorate with halved figs, cherries, halved passionfruit and lisianthuses. Be sure to tape the bottoms of the stems of the flowers with sticky tape so that the sap doesn't leak onto the cake. 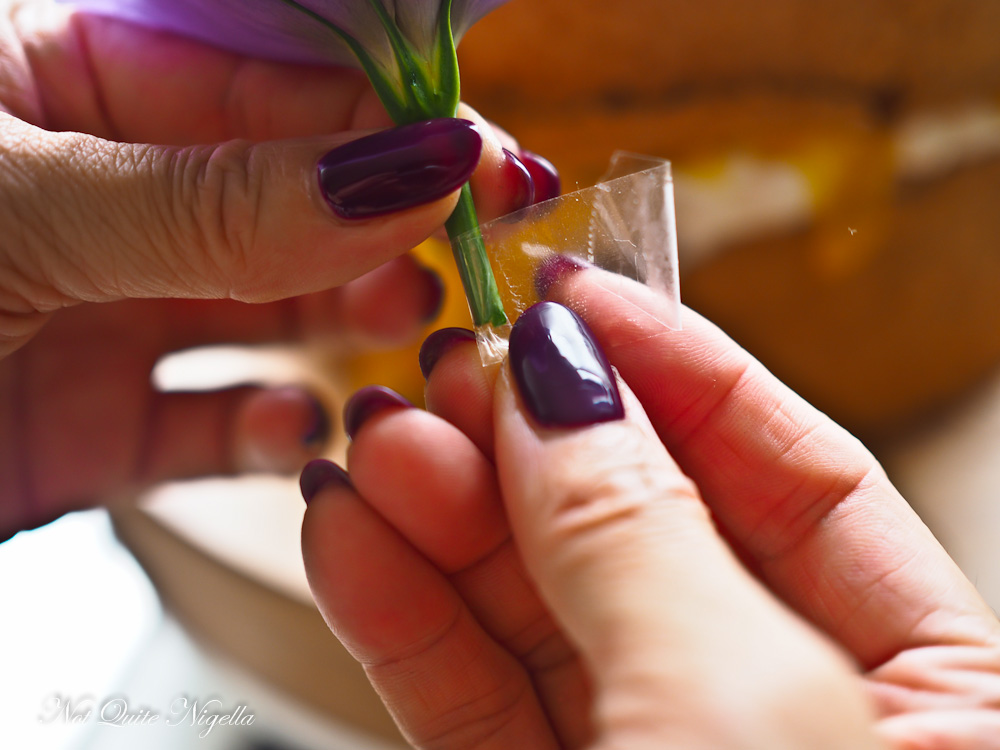