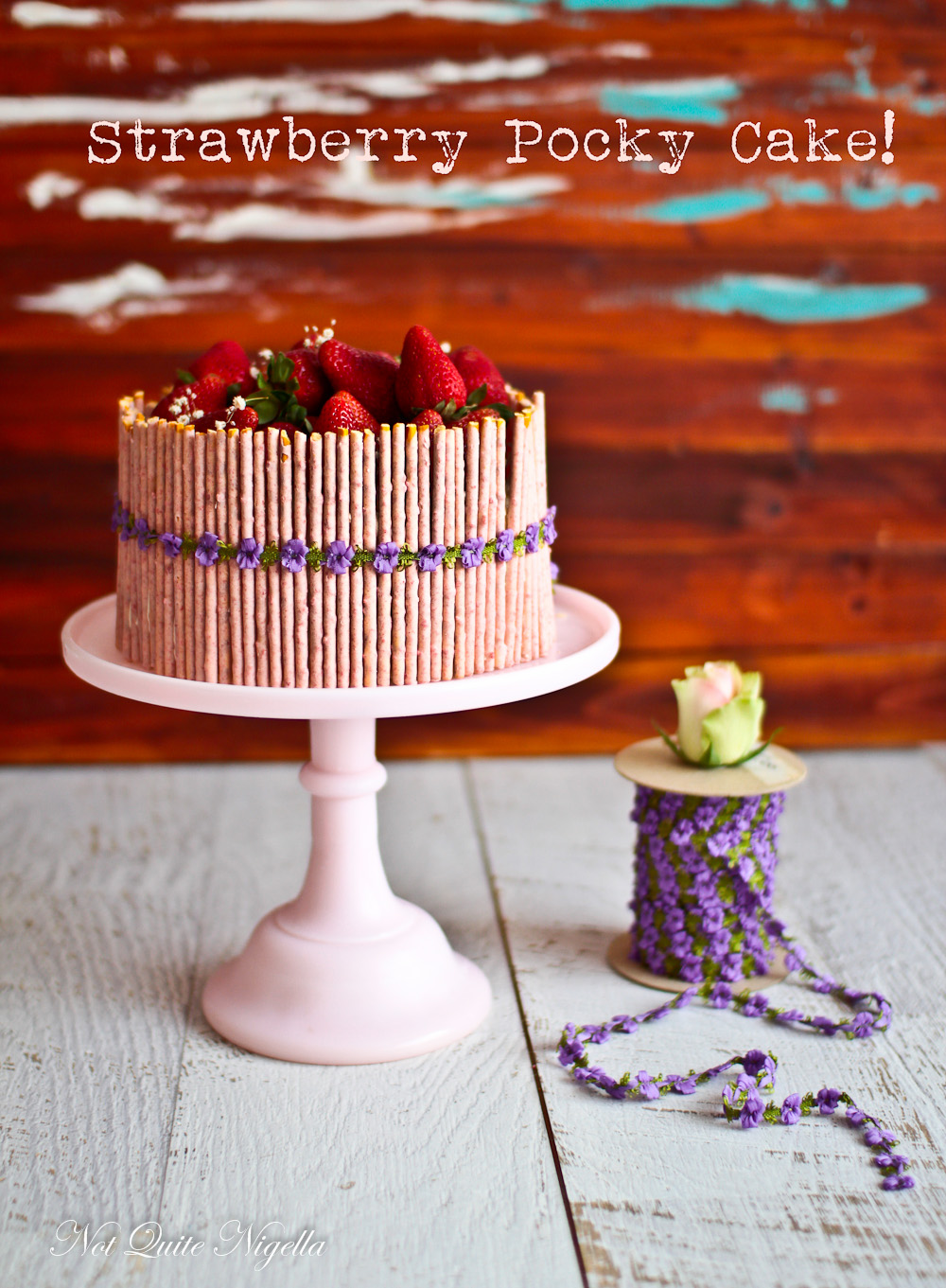 This strawberry Pocky cake is the cake that I would have dreamed about as a child. It is a double layered, light as air Japanese cheesecake filled with a thick layer of strawberries and whipped cream in the centre. Surrounding it is a sweet boundary of strawberry chocolate coated Pocky sticks and in the centre is a tumble of fresh strawberries. La Vie En Rose! 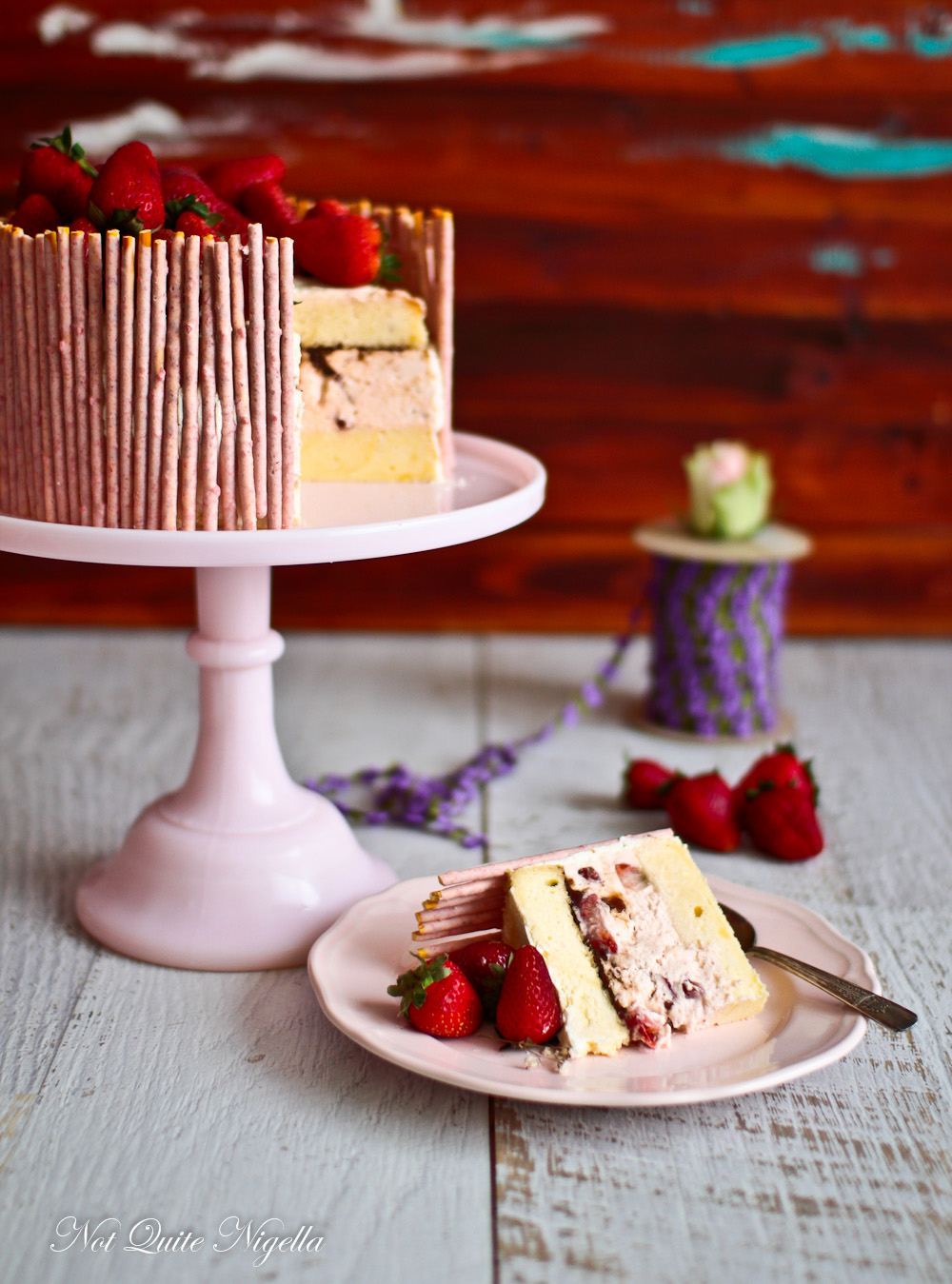 I promise that I will eventually stop with the Japanese themed recipes but for now I was inspired by the Japanese snack food Pocky. These are chocolate coated pretzel sticks that are very popular in Japan and Asia. While there are plenty of gorgeous Kit Kat cakes around and I decided to use these snacks to make a pretty border around a cake.

When I lived in Tokyo I would spend some time every day looking at the cakes at the patisseries and department stores. There were so many that I would almost become dizzy at the colour combinations and flavours. During this recent trip I dragged poor Mr NQN into the whole demented routine. He never quite understood the need for me to enter a bakery, have a wide eyed look around and inhale deeply - it was a moment of bakespiration. He would stand outside shifting the weight from his tired feet, ever so patiently awaiting my return. 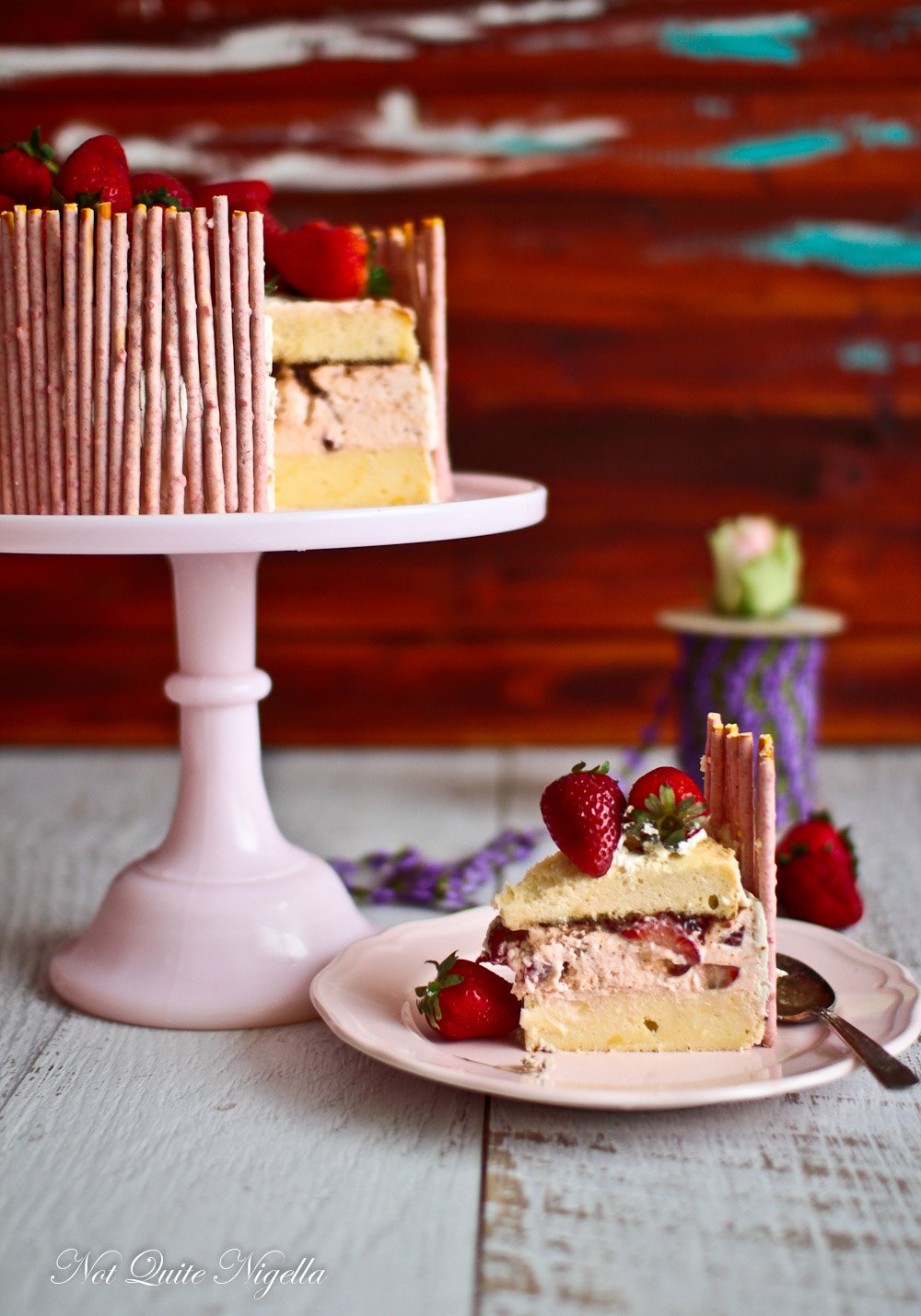 I don't want to assume that you've all tried a Japanese cheesecake so I'll explain the difference. A Japanese cheesecake is much airier from whipped egg whites so that it isn't thick, it's light more than anything else. It also uses about half or a third of the usual amount of cream cheese. As I said I don't want to assume that everyone knows what I am rabbiting on about because when I took a taxi from Sydney airport the taxi driver asked me where I had been and when I told him "Japan" he asked me, "Is that a country or a city?". He actually had never heard of Japan and spent the rest of the cab ride asking me questions about it. When I would answer them he said, "Are you tricking me?" - jokingly (I think!). 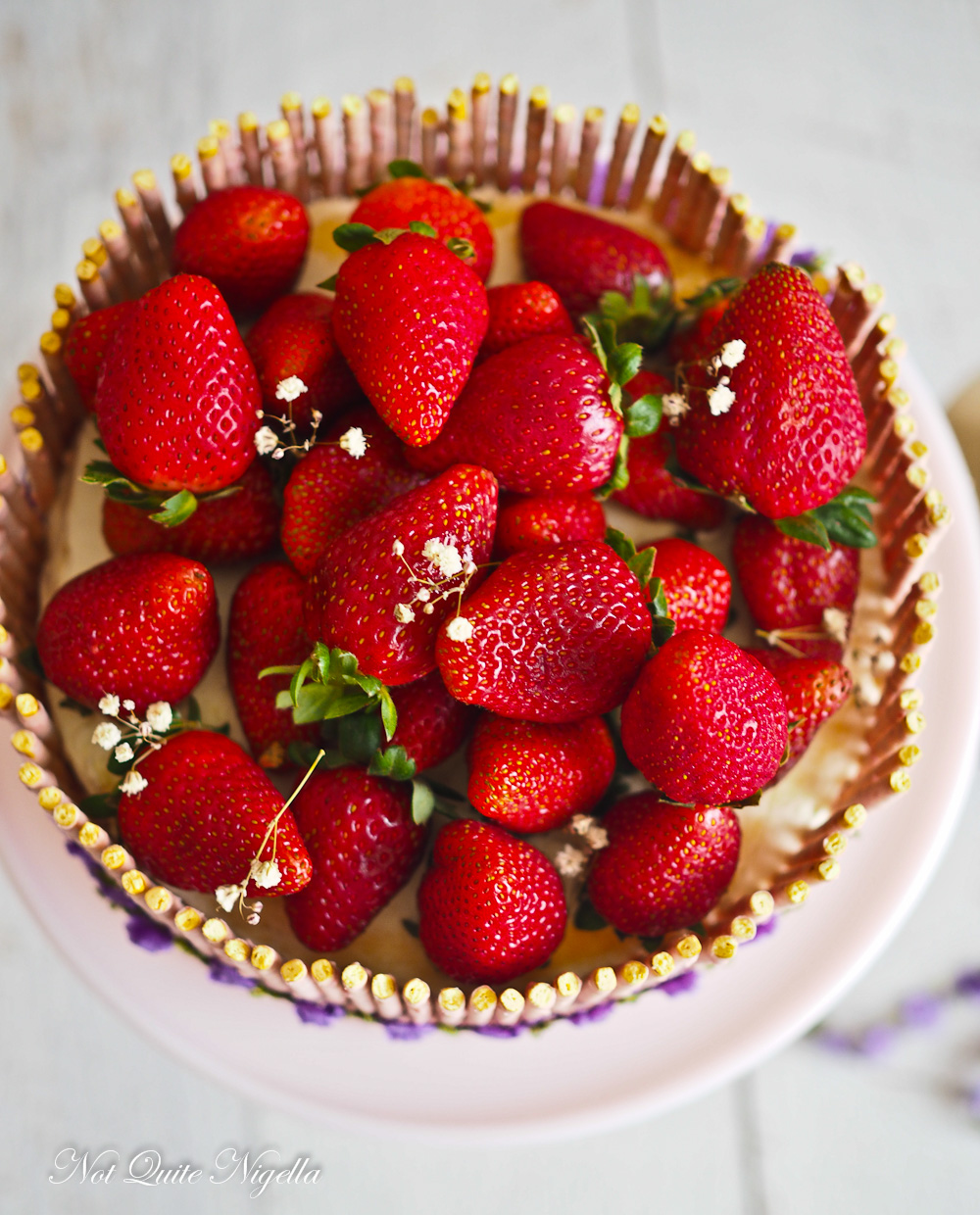 If you love pretty cakes that are light in texture and abundant with fresh fruit then may I urge you to make this cake which I have called Harumi which means spring goddess. It is ironic of course that we are going into Autumn rather than Spring but in Australia we have strawberries grown all year around because of the different varieties grown and weather in different states. At the moment most are grown in Victoria in South Australia. I also added a touch of baby's breath on top just to give Harumi a little floral adornment.

So tell me Dear Reader, have you ever tried a Japanese cheesecake? Do you think that taxi driver was putting me on or have you met people that don't know about certain countries? And is there a fruit that you would love to eat all year round if you could? Do you like Pocky? 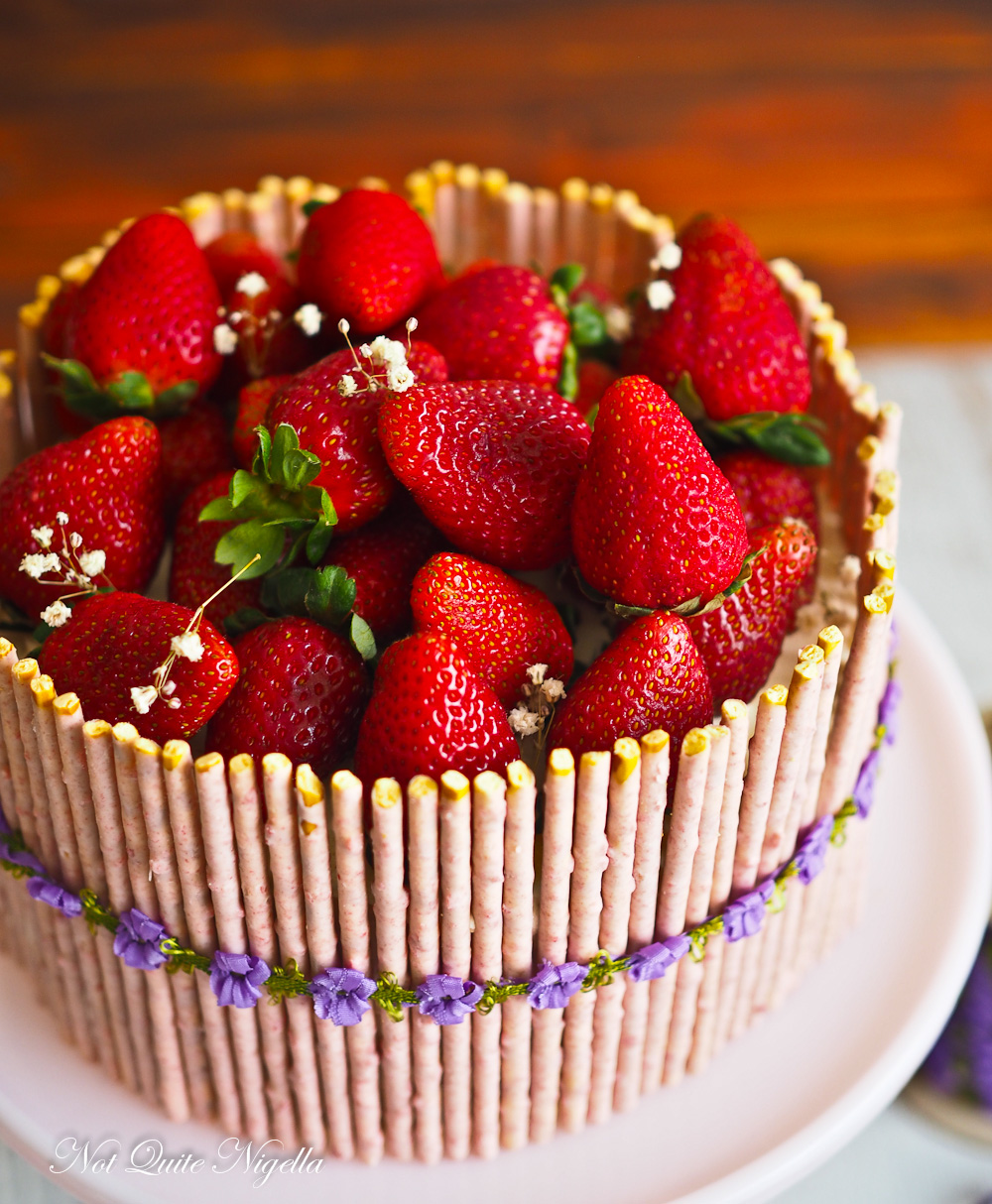 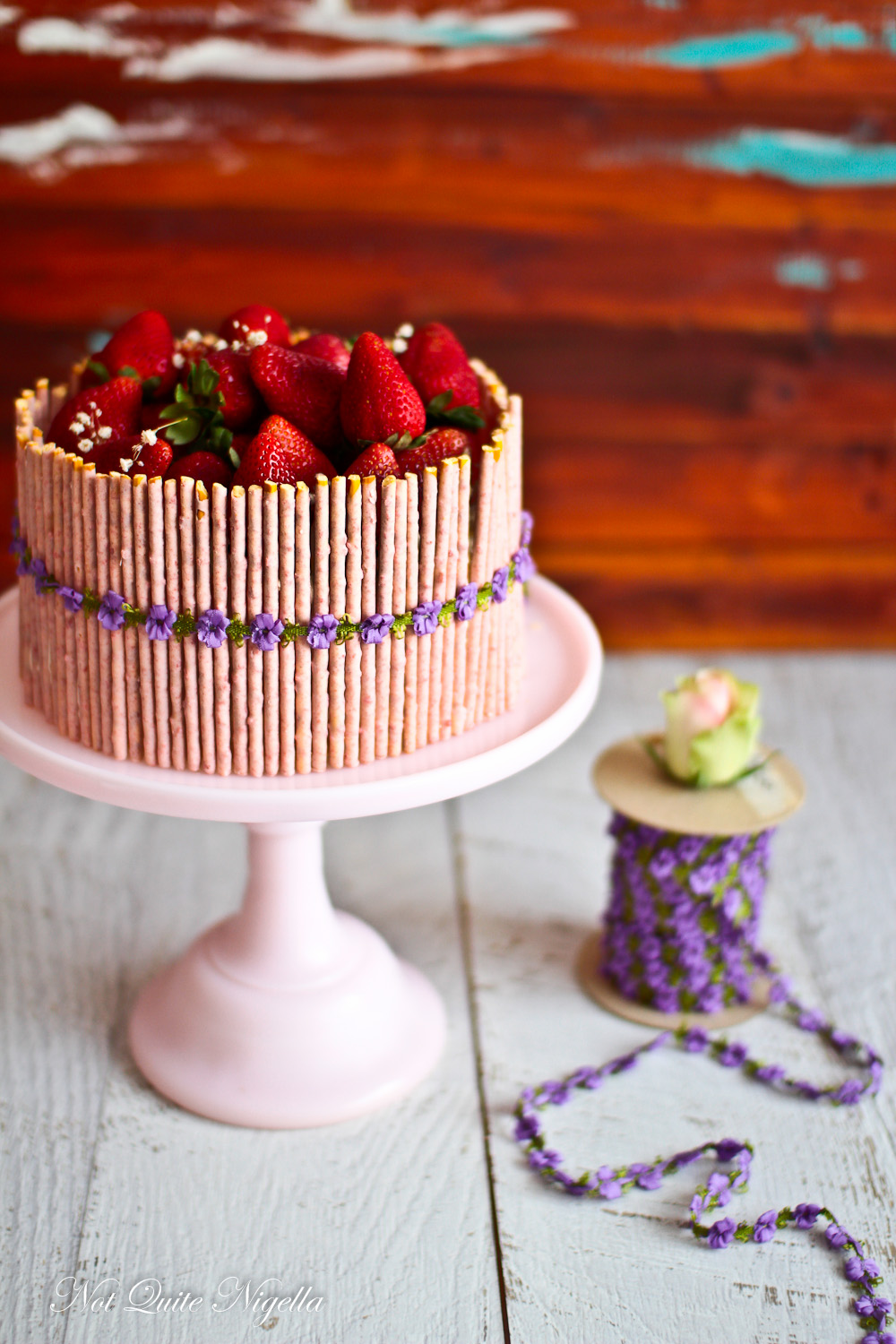 Step 1 - Preheat oven to 130C/266F. Line the base and sides of a 20cm/8inch springform pan. Then wrap the outside with two layers of tin foil. Over a double boiler melt the cream cheese, milk and the butter. When melted cool completely. Whisk in the two flours, salt, lemon juice and egg yolks. 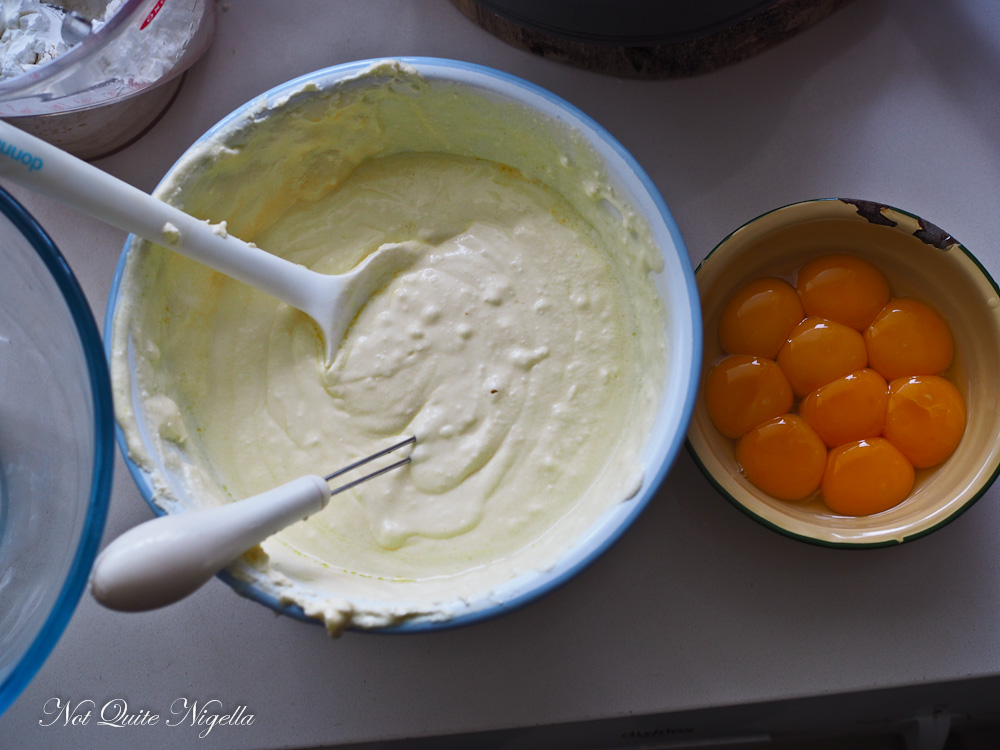 Step 2 - Add the egg whites and cream of tartar to a very clean mixer fitted with a whisk attachment. Whip on high speed until it becomes foamy and then on the highest speed add the sugar in in a stream and whisk until you get soft peaks. 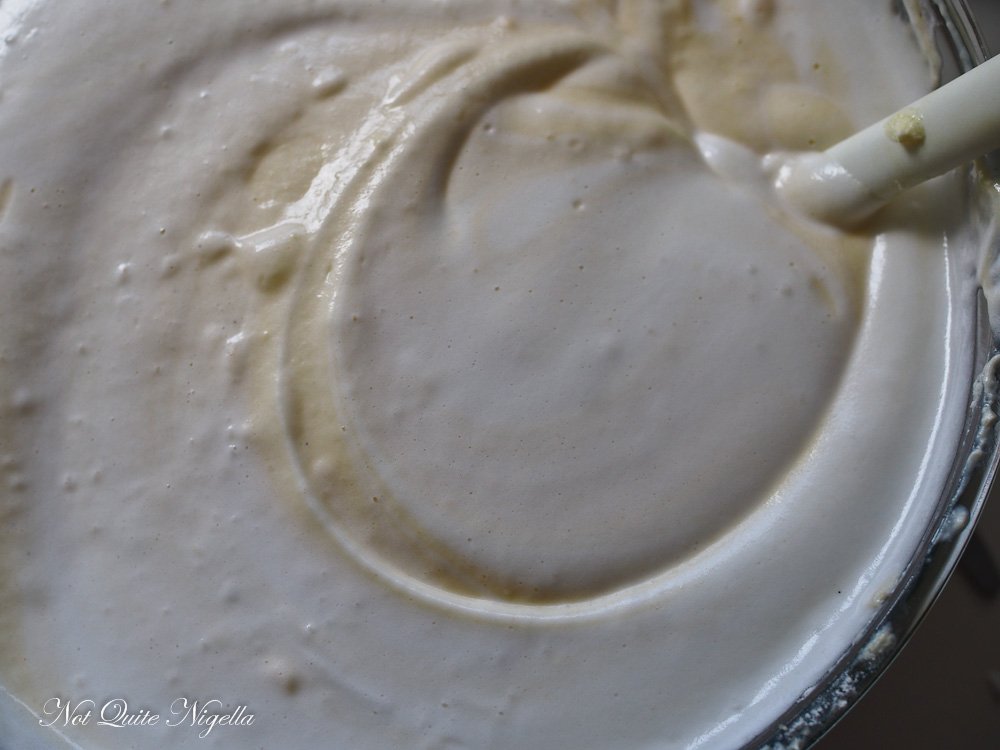 Step 3 - Add a third of the whites into the cream cheese mixture and combine folding gently. Add the remaining whites in two lots and stir until there are no streaks remaining. Scoop into the prepared tin and bake for 1 hour 15 minutes until set in the centre and a skewer inserted into the centre comes out clean. Cool completely in the tin. You can wrap these in cling film and store in the fridge overnight if you need to. 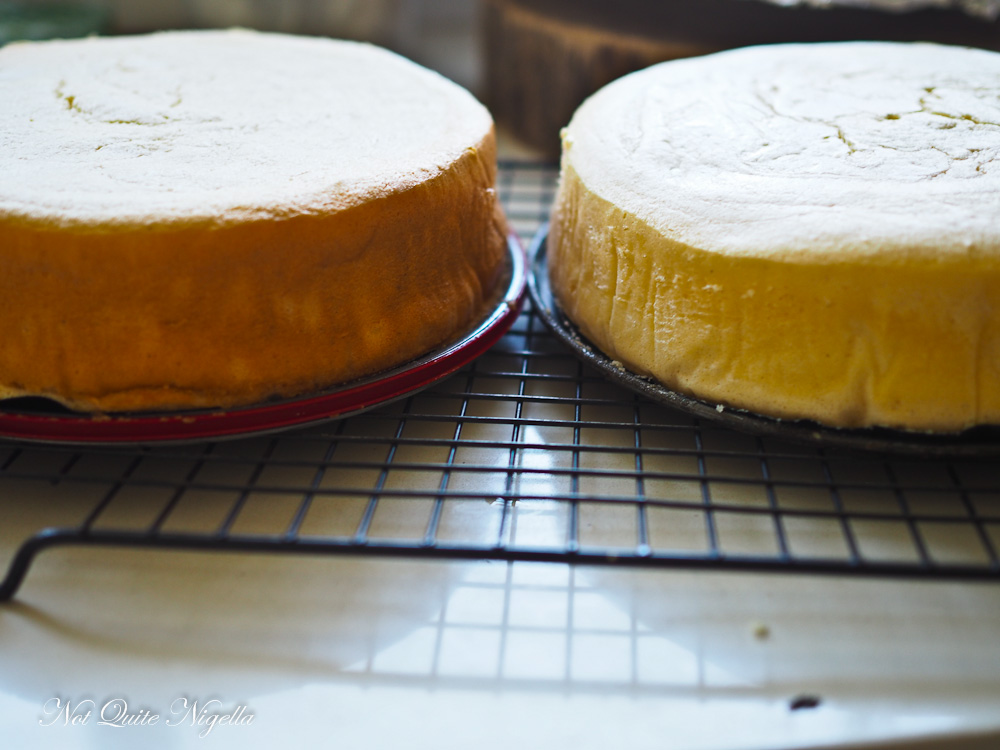 Step 4 - Line a surface with cling film. Slice the cake in half horizontally and place each half on the plastic film. Then using the same tin you baked it in, line the base and sides making sure the sides go up high (as shown). The cheesecake does shrink a little so I used a Bake Snake to fill in the sides. Place one half of the cheesecake in the bottom. 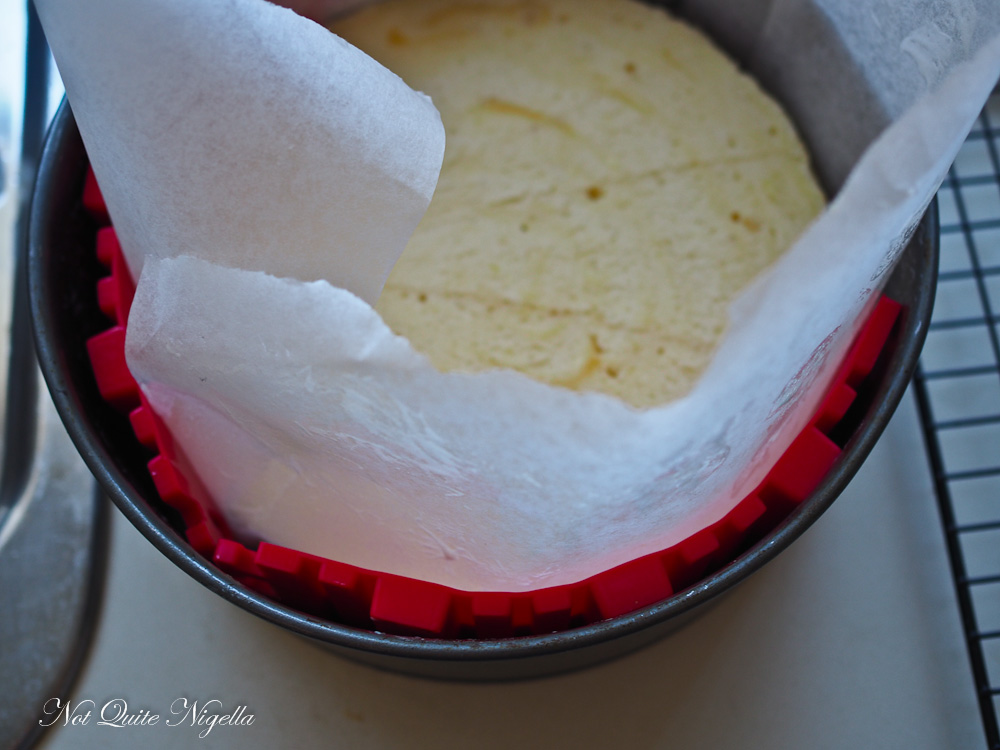 Step 5 - Place the water in a microwave proof bowl and sprinkle the gelatine powder over the surface. Stir to remove the lumps and then microwave for 1 or 2 10 second bursts on 100% power until it has become liquid. Cool but do not allow to set. Chop up one punnet of strawberries into cubes. 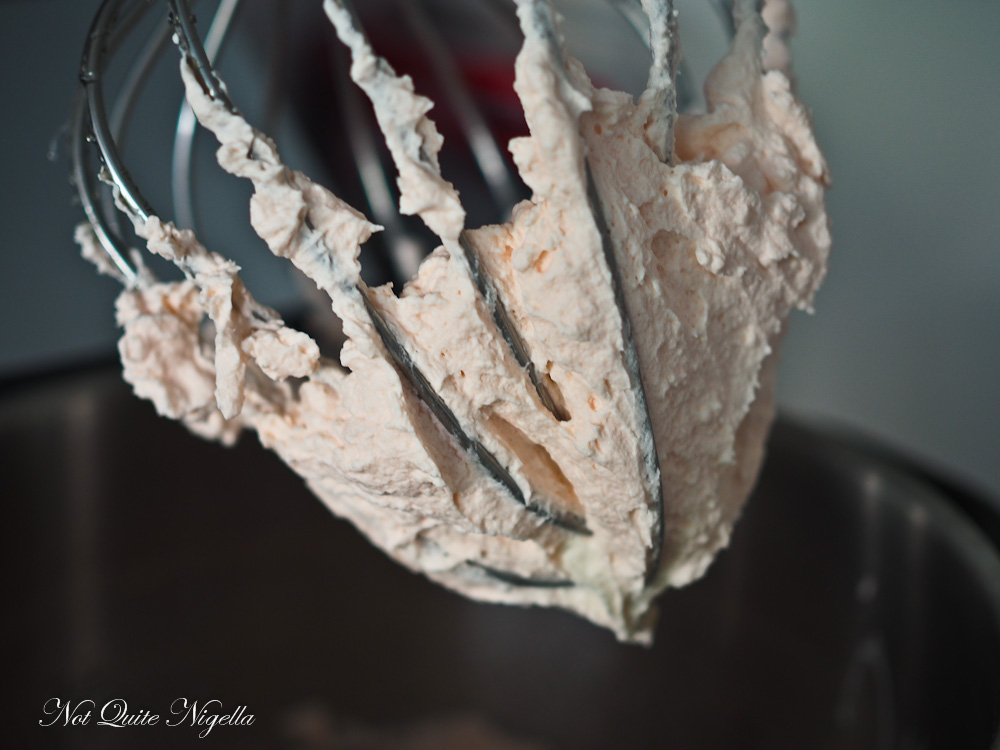 Step 6 - Whip the cream, vanilla sugar and pink colouring until fluffy and drizzle in the cooled gelatine liquid. Add the strawberry jam spreading it out all over the cake and then add the entire cream mix into the tin on top of the jam. Smooth down with an angled spatula and place the other cheesecake half on top. Refrigerate for at least 2-3 hours until set. I set this overnight. 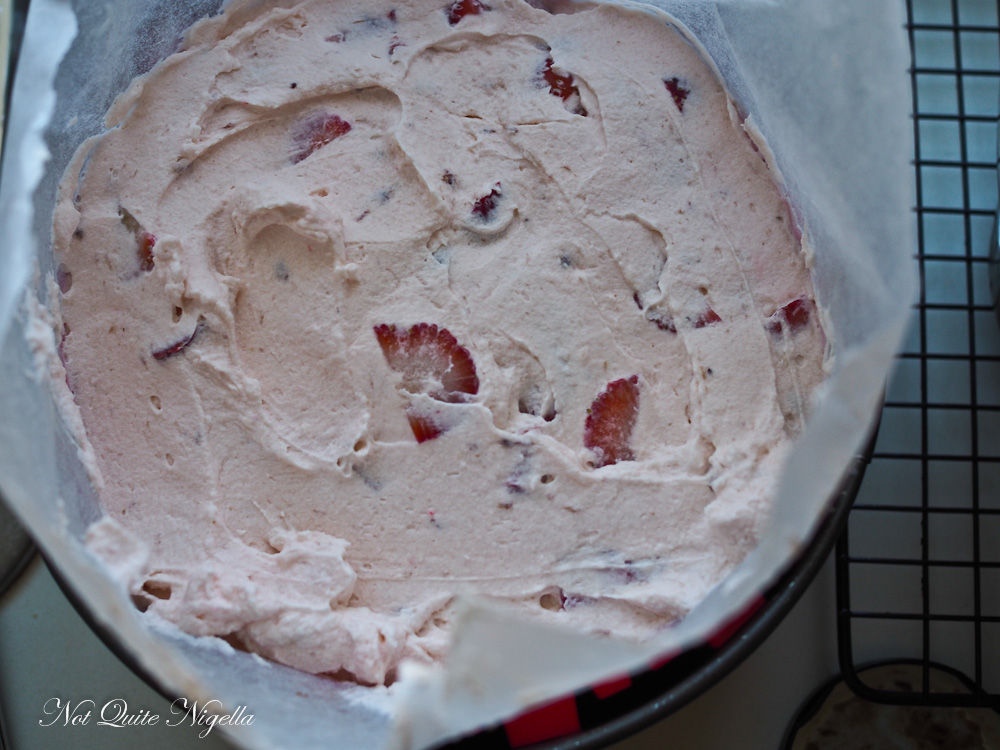 Filling with a centre of strawberry stabilised whipped cream 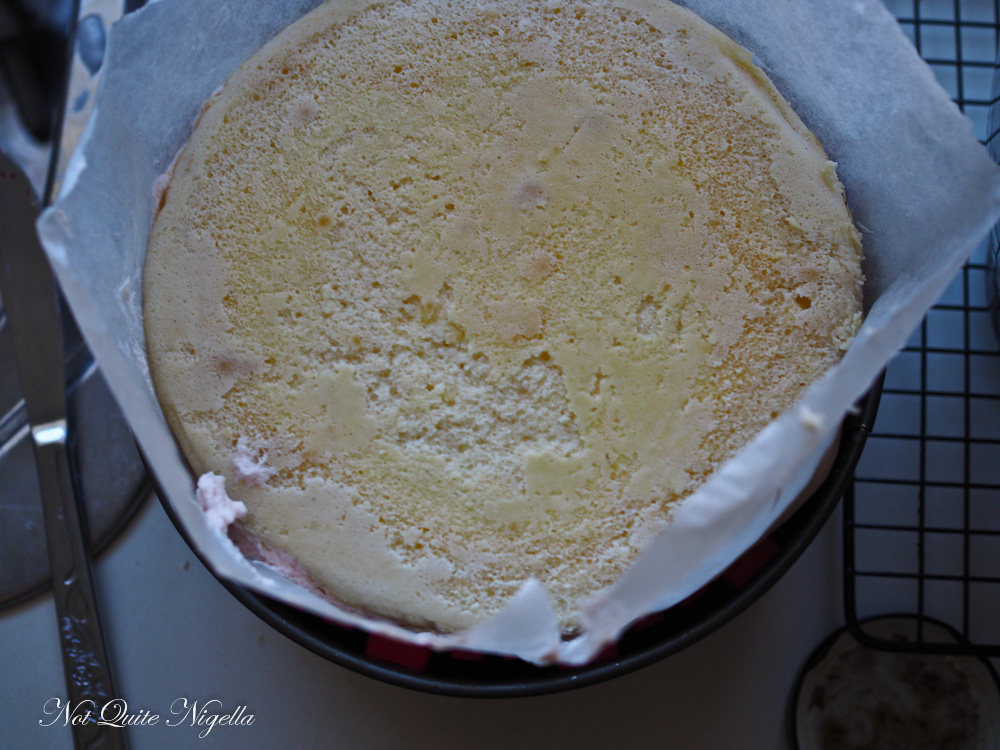 Then the other layer of cheesecake

Step 7 - Unclip the side and remove all of the paper. Place onto a serving plate. Whip the 150ml/5fl ozs. cream until stiff peaks and spread on the outside and top of the cake. Measure your Pocky. I cut off the ends of them without the chocolate, you can leave it on. It's up to you. Stick them to the side of the cake. Then top with strawberries! 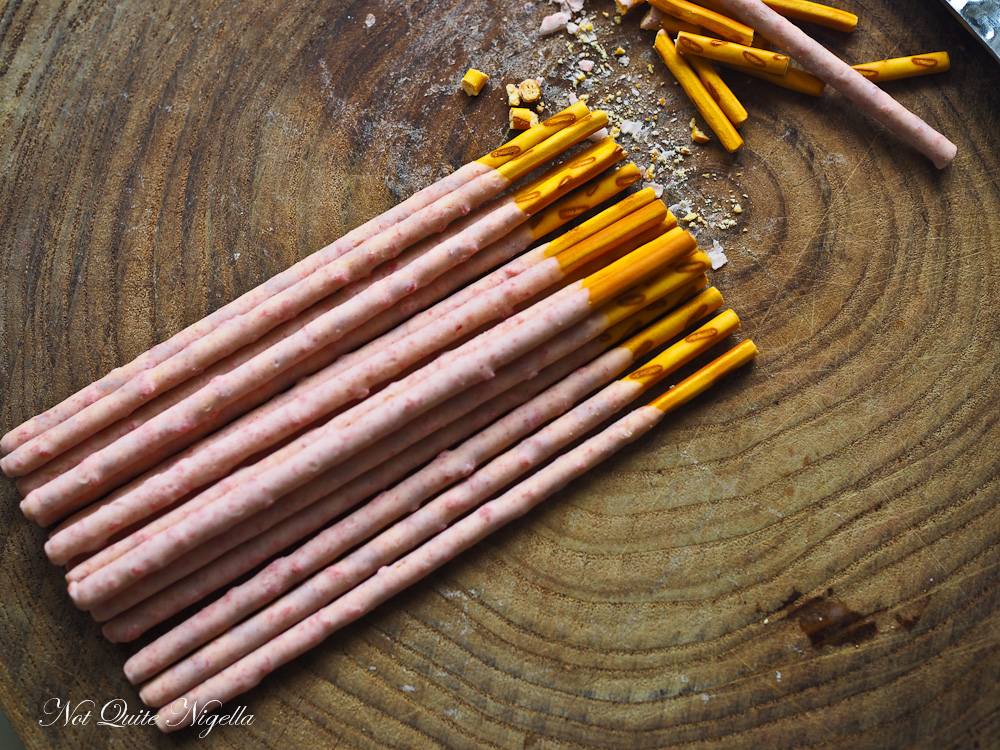 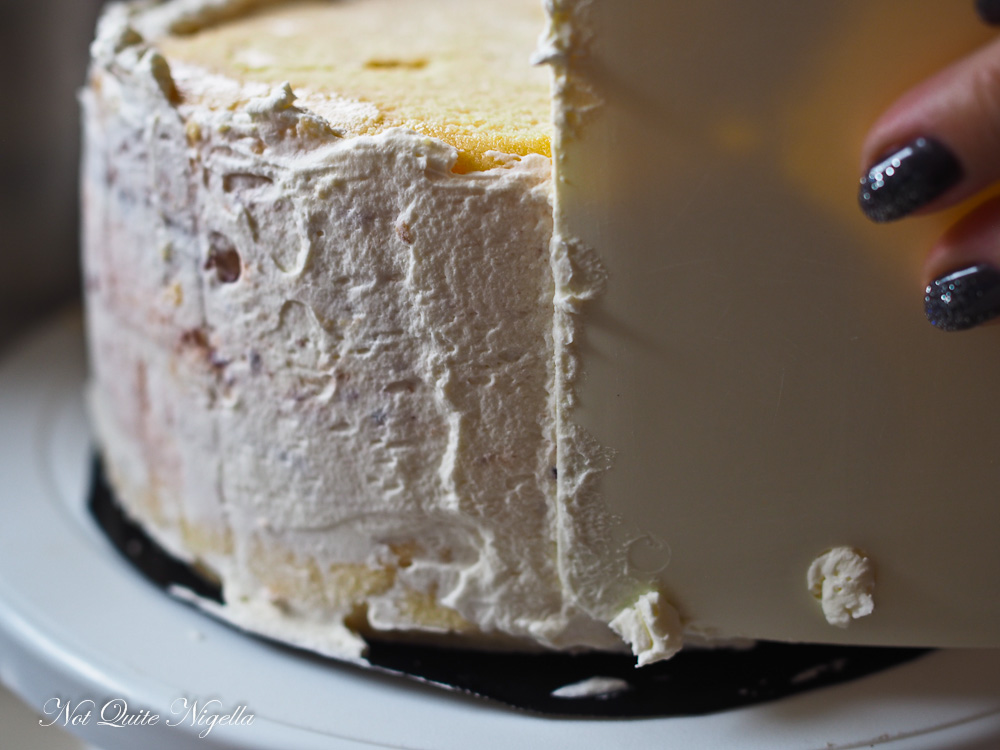 Smoothing on a cream layer 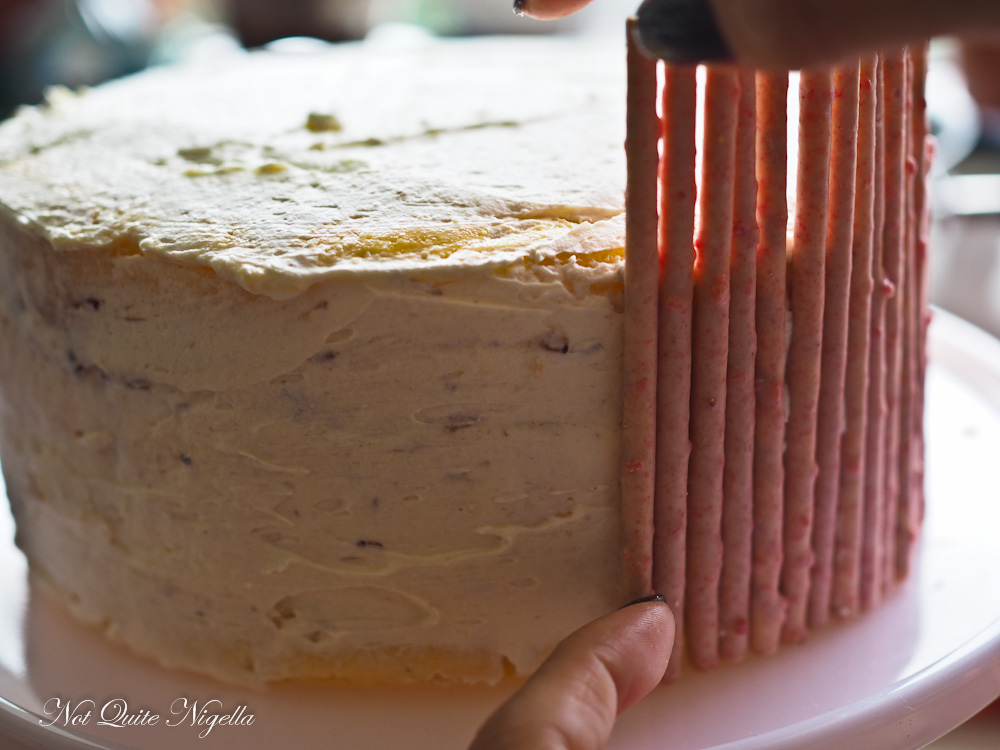