An Anzac Caramel Slice - Two Aussie Classics In One for Anzac Day! 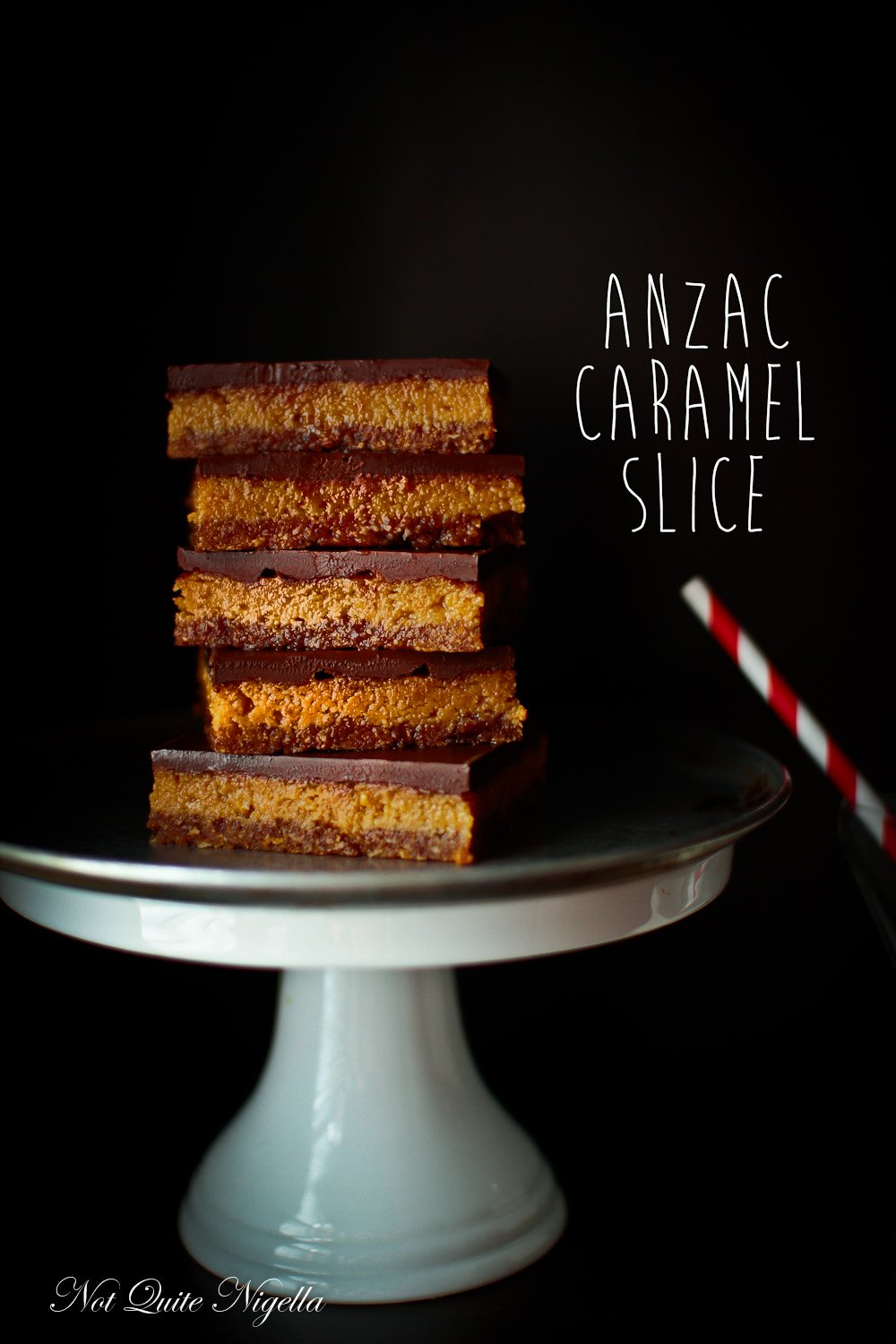 Aussies love two things: a good caramel slice and an Anzac biscuit. So I thought to combine the two to make a caramel slice that was even easier and possibly more delicious than the original. The flavour of the two items actually go perfectly together. Indeed both the Anzac biscuit and the caramel slice are sweetened with golden syrup and flavoured with coconut. It's a perfectly sweet treat to feed a crowd on Anzac Day coming up!

For those of you that haven't tried them, Anzac biscuits are a deliciously crunchy biscuits that are made of a combination of rolled oats, coconut and golden syrup. I've given these to friends outside of Australia and New Zealand and they have adored them. And using pre-bought ones hastens the process of making a caramel slice. And speaking of, I'm pretty sure I don't need to extol the virtues of a caramel slice. With a bottom biscuit layer topped with a thick caramel layer and dark bittersweet chocolate, they're the stuff of 4pm sugar slumps, school fetes, festivals and afternoon teas. So I decided to break the rules a little and try to merge the two Australian favourites together. 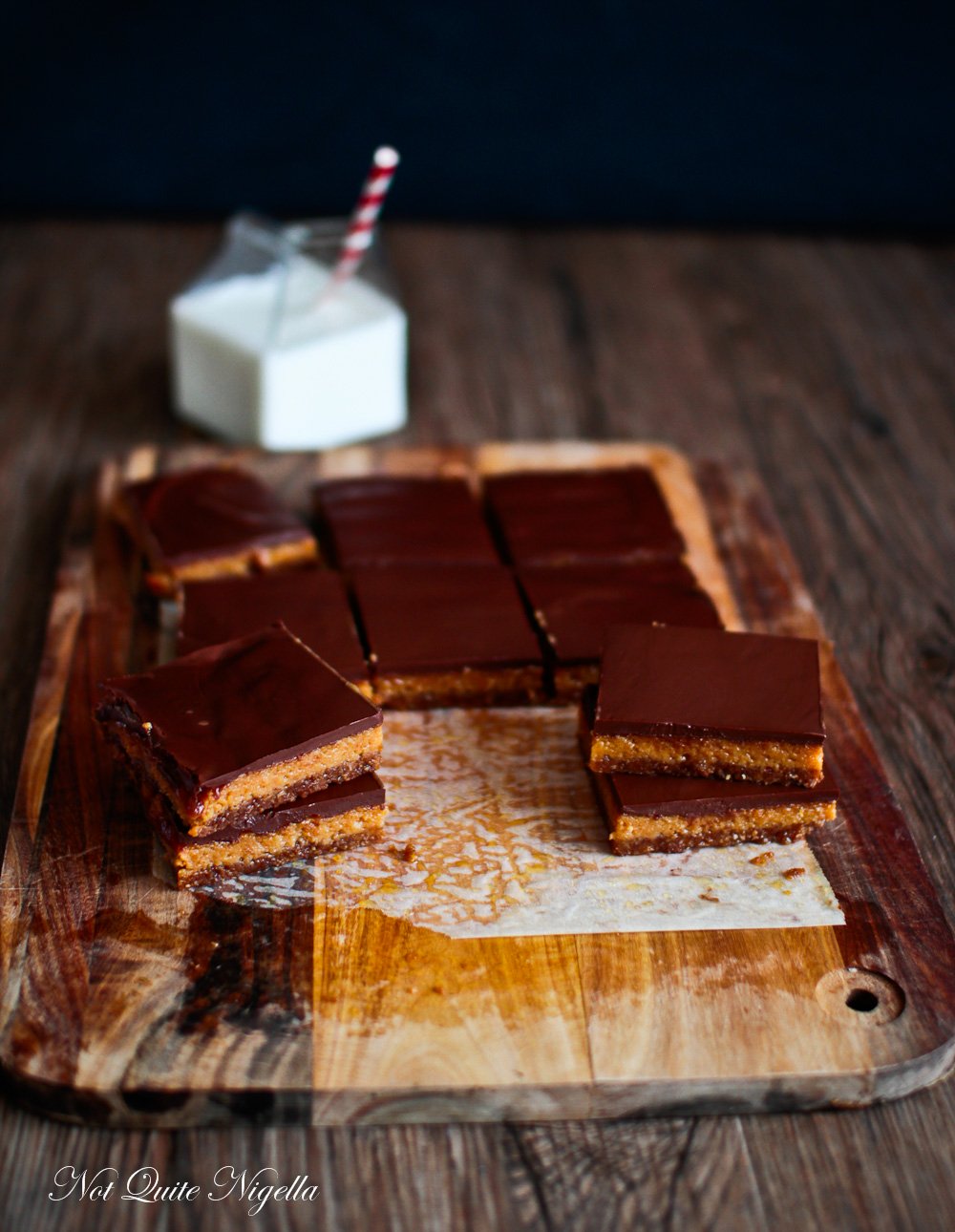 Mr NQN told me recently that I have a particular delight in rule breaking. It's quite true. He told me the other day that he read a study that said that introverts like him were more likely to follow the rules whereas extroverts like me like to break them. Insofar as he is concerned this is really true and my theory is that he follows the rules because he doesn't have to want to explain himself to anyone or have anyone talk to him unnecessarily. I should add that I don't mean that I would ever hurt someone or commit a crime but there are a whole bunch of silly rules that exist. Like not licking a butter knife that has peanut butter on it or combining two disparate ingredients.

Speaking of crimes, the other day he was walking home from work. He has been doing that for a while and his route takes him through Surry Hills. That evening he saw a young man breaking into a house. "How did you know that he was breaking in?" I asked him. He explained that it was because the man was swinging off the gate and trying to kick down the door, not the sort of behaviour if you say lost your keys and were just trying to get through a jimmied window to avoid calling a locksmith. It was exactly what had happened when someone tried to break into my parents' house a few years ago by kicking down the door. 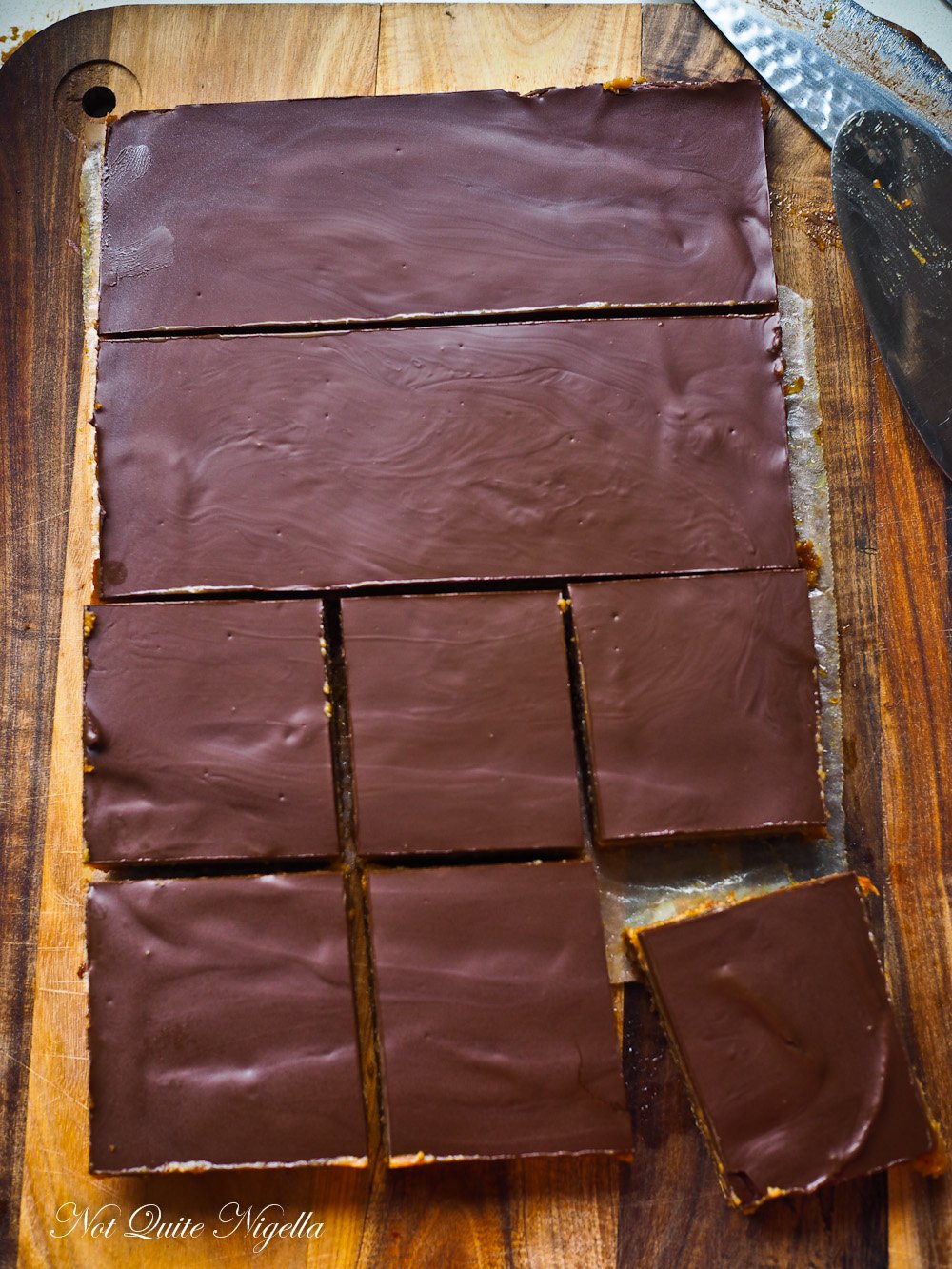 Mr NQN called the police straight away but because he was across the road and the man had an accomplice he didn't want to get any closer. It was also dark so he didn't get a good look at him only being able to describe what he and his accomplice were wearing. The police called while he was relaying the story to me. Unfortunately it was a break in and the next day he was asked to give a statement at the local police station. He only wishes he could have given more information!

Back to this slice though and other sorts of rule breaking. I may have overcooked the caramel somewhat. I was reading a recipe from a well known cookbook writer whose recipes I have mixed results with and she said to simmer it for 7-8 minutes and then bake it for 20 minutes but this resulted in an overly cooked caramel-not a huge issue but it wasn't as smooth as I wanted it. I'd recommend cooking it for less time and have adjusted the recipe to reflect this. 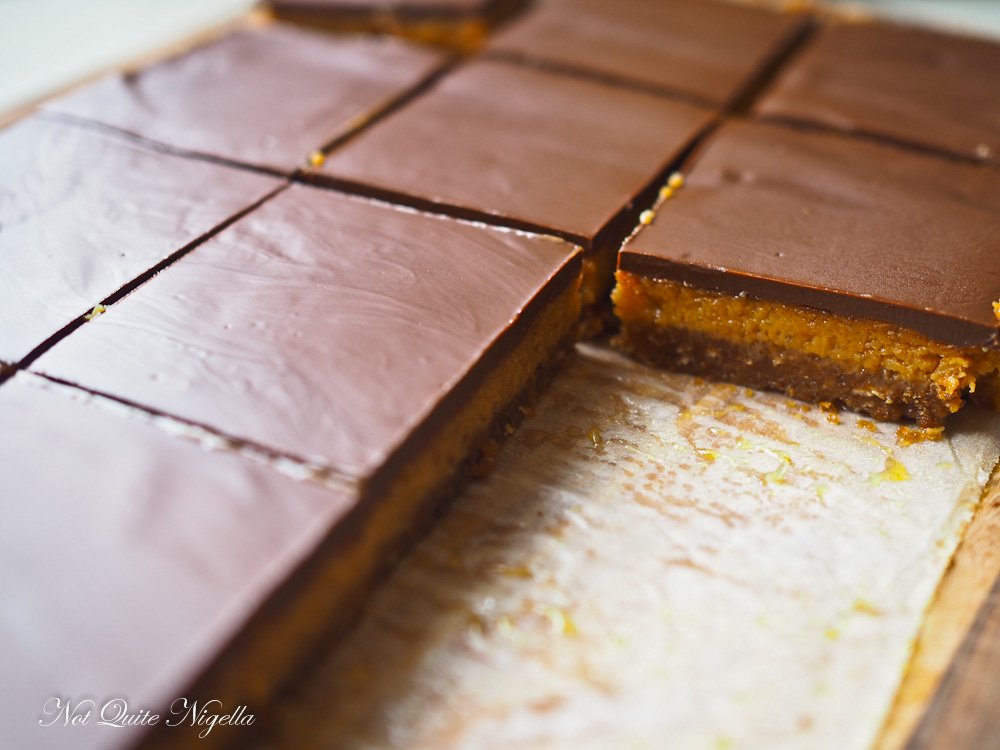 Still, with the Anzac biscuit base this is a really gorgeous sweet treat that doesn't require much effort at all. I can see why slices are so popular-because with little effort you can feed hordes. And with a little Anzac magic it's hard to stop at one bite! ;)

So tell me Dear Reader, do you like caramel slices and Anzac biscuits? Are you an introvert or extrovert and do you follow the rules or break them? Have you ever seen a crime being committed and if so, what did you do? 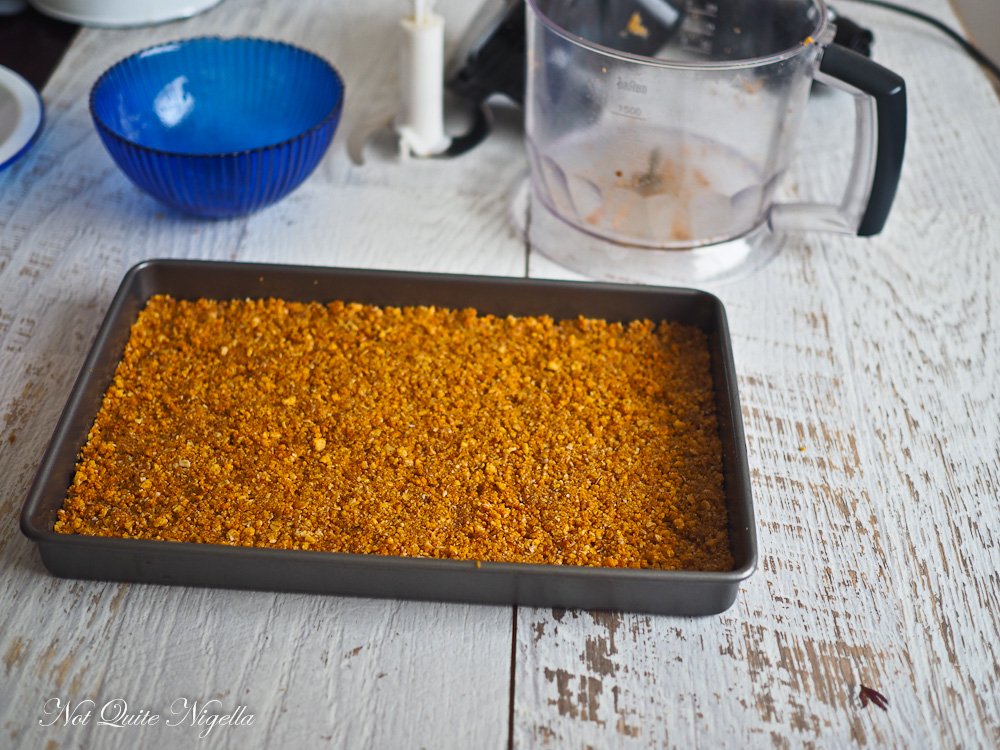 Step 1 - Preheat oven to 180C/350F. Line a 18x28cms lamington tin on the base and sides with parchment paper. Process the biscuits until very fine in texture-they are quite hard and crunchy so process them for a bit longer than you usually would. Add the melted butter and coconut and mix to combine. Press into the prepared tin and bake for 8 minutes. Remove from the oven and set aside. 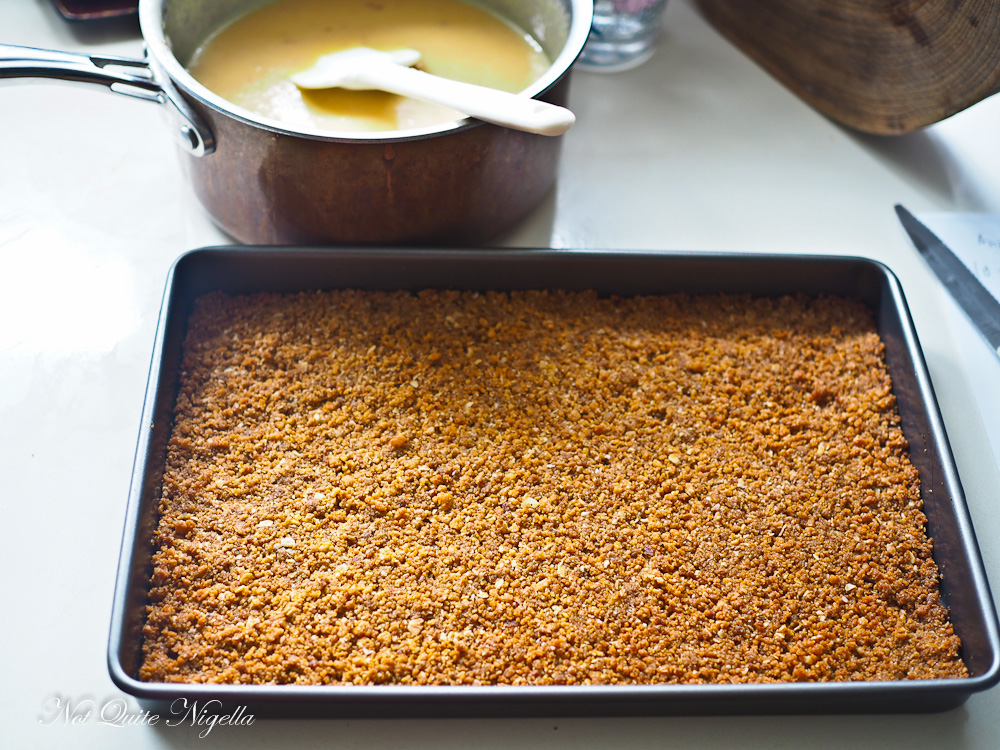 Step 2 - In a saucepan, add the butter, condensed milk and golden syrup as well as a pinch of salt and stir until melted and simmer for about 3 minutes making sure to make sure that the milk doesn't catch on the bottom. If you prefer a paler caramel only cook until melted. 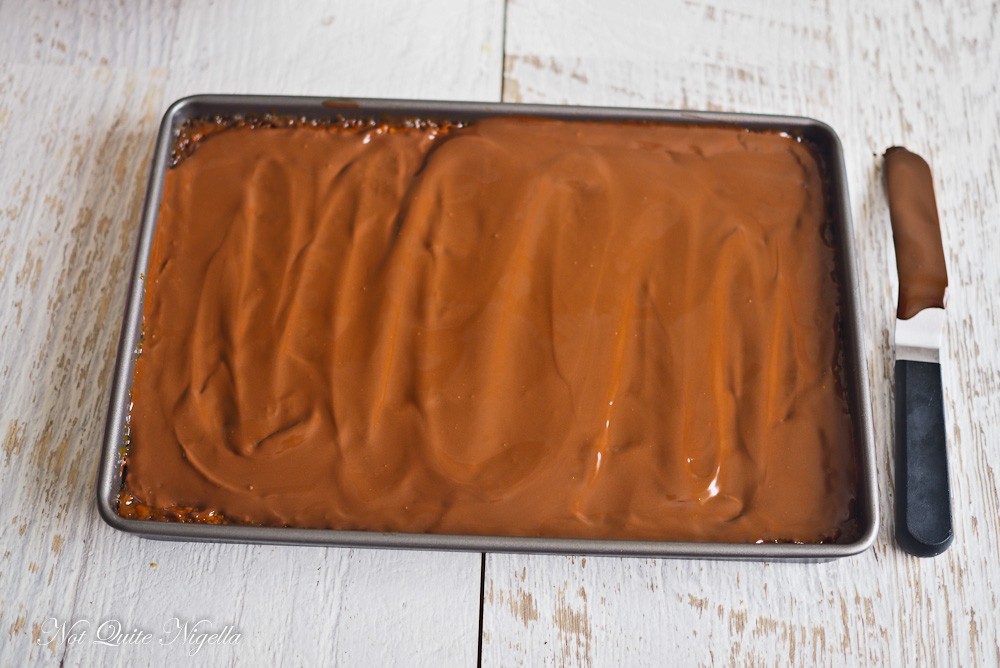 Step 4 - Melt the chocolate and the oil together and mix until smooth. Spread over the caramel slice and then allow to cool. Refrigerate to set. Cut into slices.