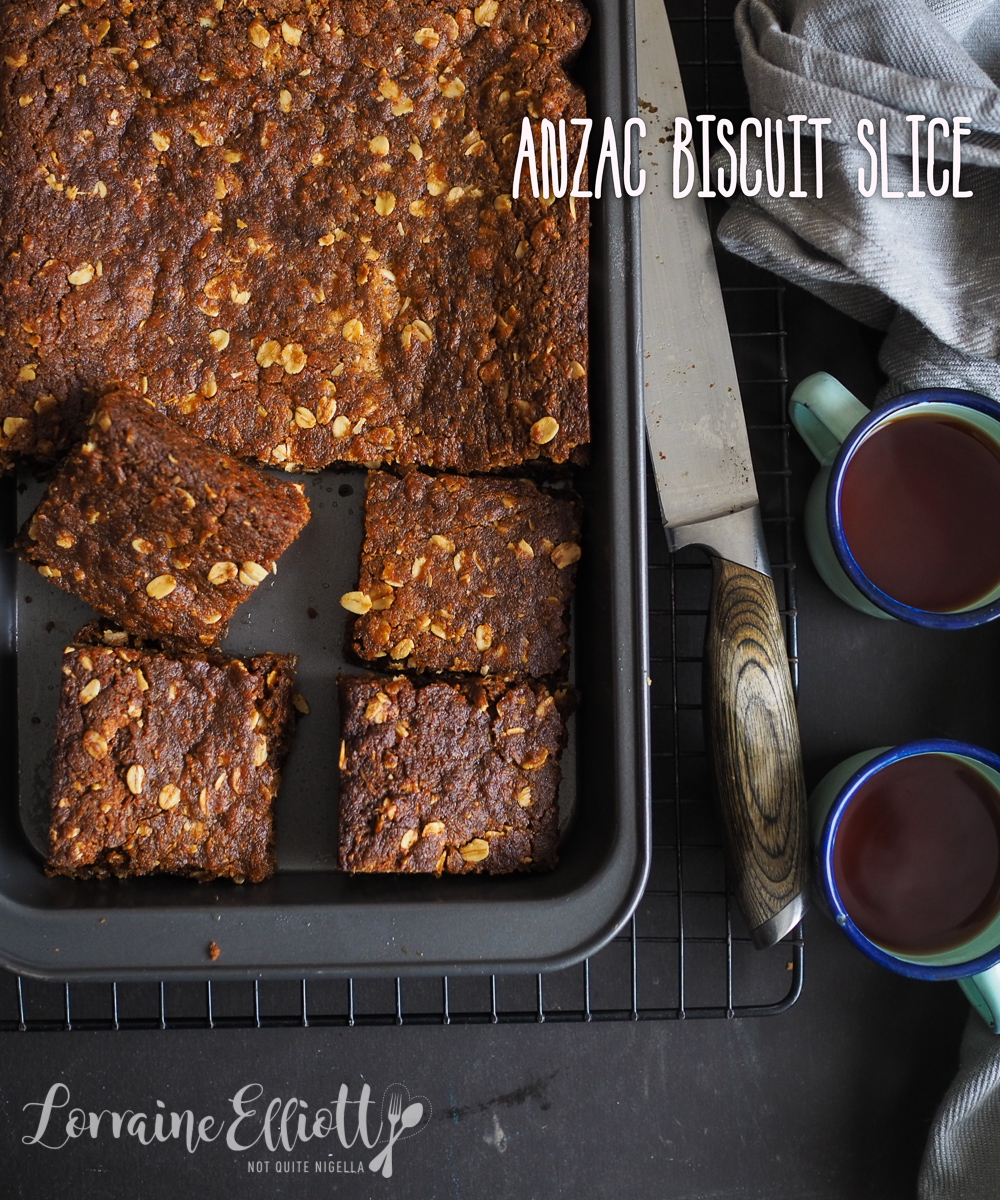 This ANZAC Biscuit slice is simplicity personified. Traditional chewy ANZAC biscuit dough is baked into a lamington or slice tin and then cut into squares or rectangles. It is such a quick and easy slice with crunchy edges and a chewy centre!

Last year I released my recipe for ANZAC biscuits in both chewy and crunchy form (with my secret ingredient!) and people were so sweet and effusive about them and said that they were the best ANZAC biscuits ever. So I decided there was little point re-making them but if I could make this special recipe as an even easier slice then that would be worth making for those that are time poor but love ANZAC biscuits! 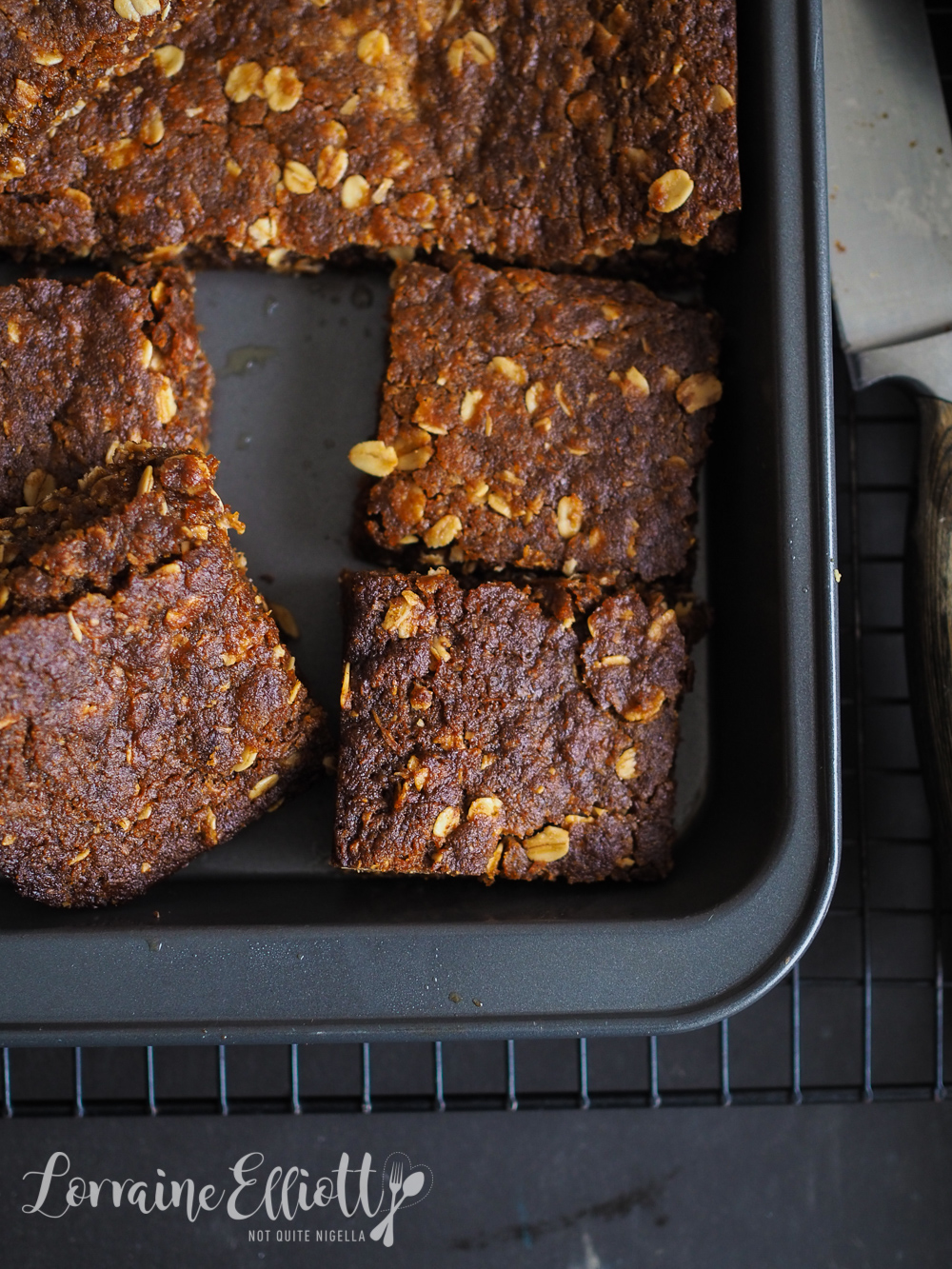 There's very little that Mr NQN gets excited about. While I'm like an effusive, excitable toddler he will hold back all his feelings. He is literally never excited about anything. Maybe it's his Scandi reserve.

One thing that he does get enthusiastic about are ANZAC biscuits. I don't know why I only make these around ANZAC Day because they're so delicious and they always disappear quickly. He isn't fussed on cookies but give him an ANZAC biscuit and he will eat hungrily sucking a few down in one go with a cup of tea.

Another instance where he got a bit giddy was about playing his favourite ever game. We love games nights with friends and he would always talk about a game called "You've got Crabs" which sounds more perverse than it is. 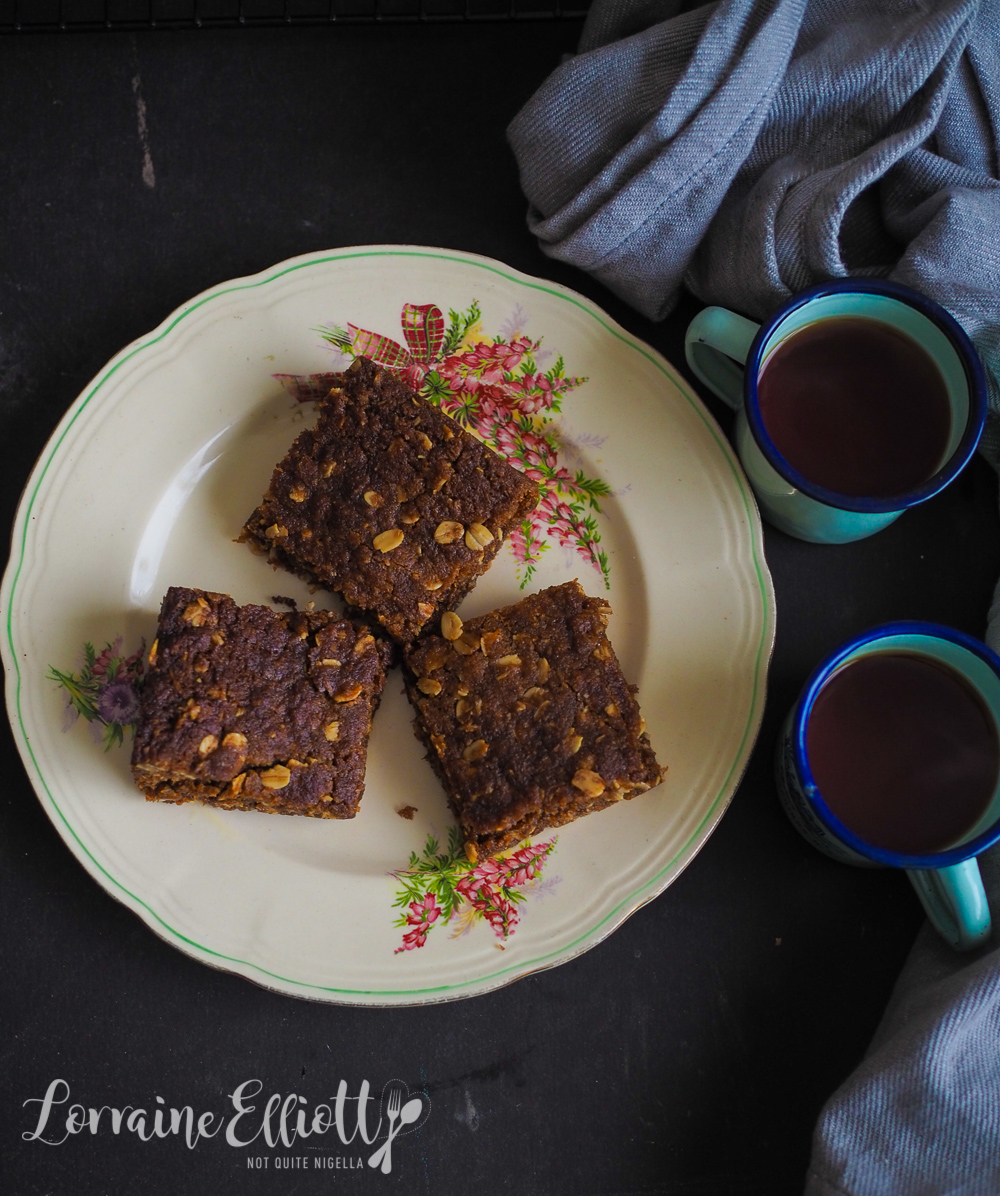 He took it out one night when Valentina and Peter were over. I don't know if I have ever mentioned this but I like beating guys. It probably stems from my all girl's high school where we would always try and beat the neighbouring boy's school. Mr NQN knows this and we have a healthy level of competition. He and Valentina's husband Peter make a good team as they did well with Pictionary and also Peter and I like to beat each other.

Valentina and I teamed up and we knew that we were at a disadvantage. Neither of us knew much about the game and when Mr NQN played us a video explaining the game we both tuned out. Also at one stage Valentina asked "Which team am I on?" which was a bit alarming although I couldn't stop laughing when she said that. It's actually a simple game involving pairs and secret signals to each other and catching the other team's signals (like a more complex Go Fish).

Somehow, by some miracle, Valentina and I won this game. I truly have no idea how because we were playing abysmally. I think it was because Peter tried to catch me out - while I am terrible at following game directions I am not too bad at faking or acting. I also secretly hoped we'd never play again because I didn't want to break my winning streak!

So tell me Dear Reader, do you like ANZAC biscuits? Are you competitive with games? Have you ever played You've Got Crabs?

Step 1 - Line a 18X22cm/7x8.6inches slice or lamington tin. Preheat oven to 160C/320F. Place the flour, oats, coconut, brown sugar and caster sugar in a large bowl and whisk to combine. 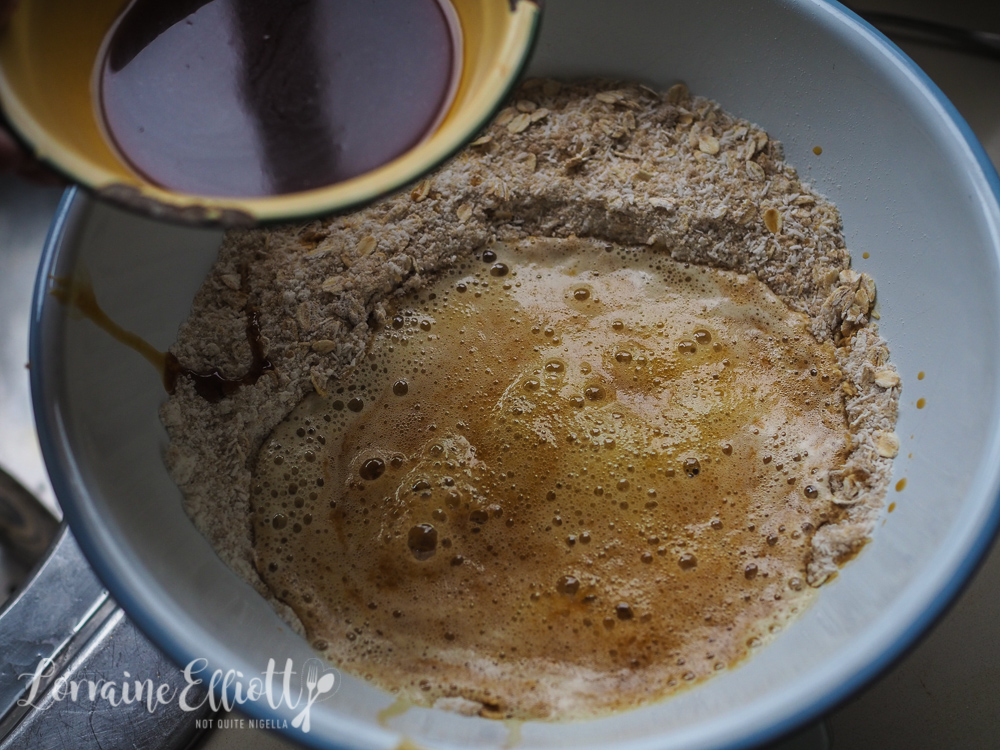 Step 2 - In a medium bowl add the hot water, golden syrup, vanilla, bicarb and salt and stir to combine (it will fizz, don't worry). Add to the melted butter and stir. Add the liquid mix to the dry ingredients stirring until just combined. At this point I like to taste the mixture for the salt-salt really makes such a difference with ANZAC biscuits with the sweetness of the sugar and golden syrup. Add more salt if needed. 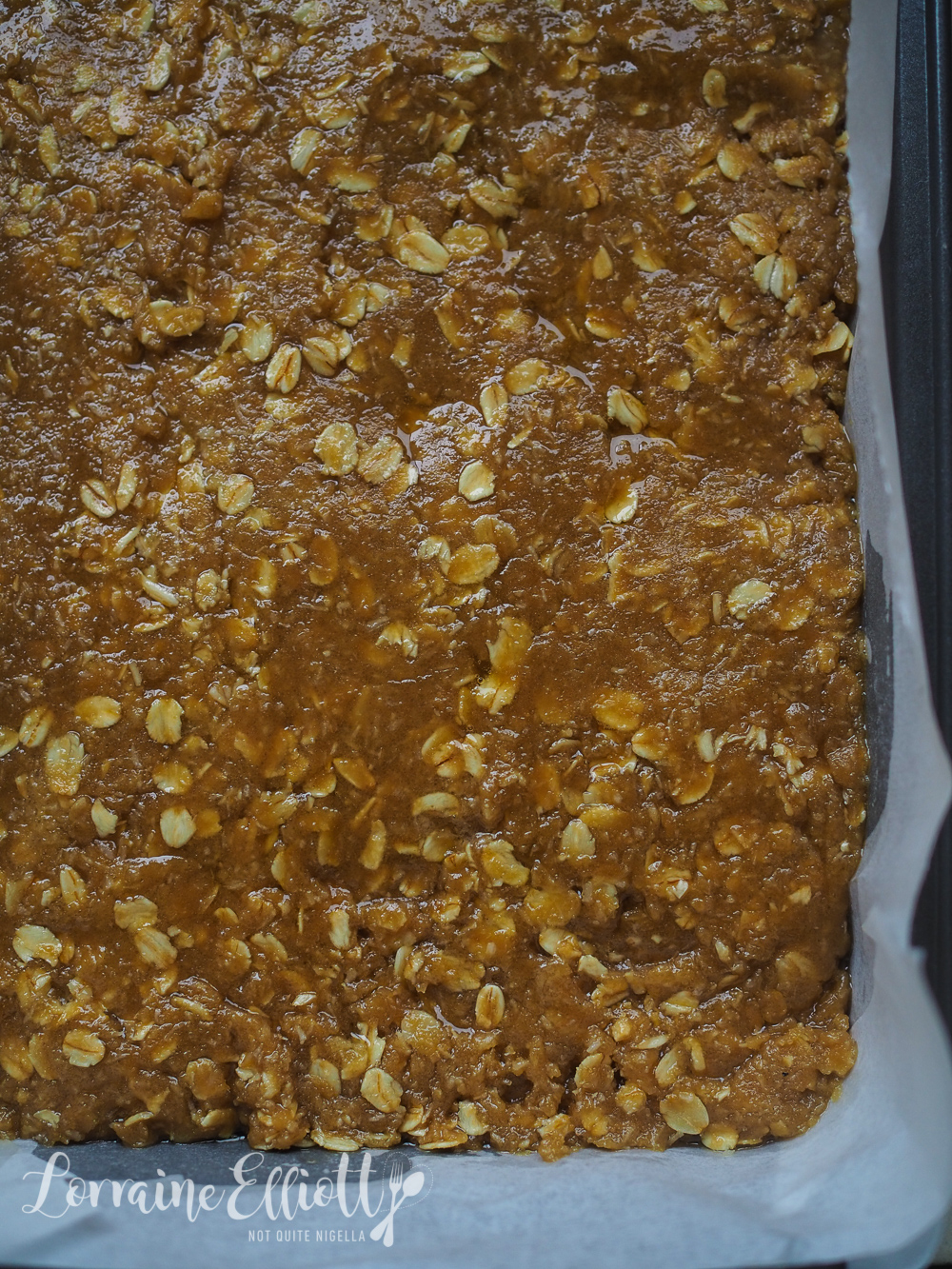 Step 3 - Spread out in the prepared tin smoothing the surface with an angled spatula. Bake in a preheated oven for 40-45 minutes turning halfway to ensure even browning. Cool in the tin for 15 minutes. Then move to a cooling rack and allow to cool completely. Cut into slices or squares. These can be stored in an airtight container for 1-2 weeks at room temperature (if you don't eat them first! ;) ). 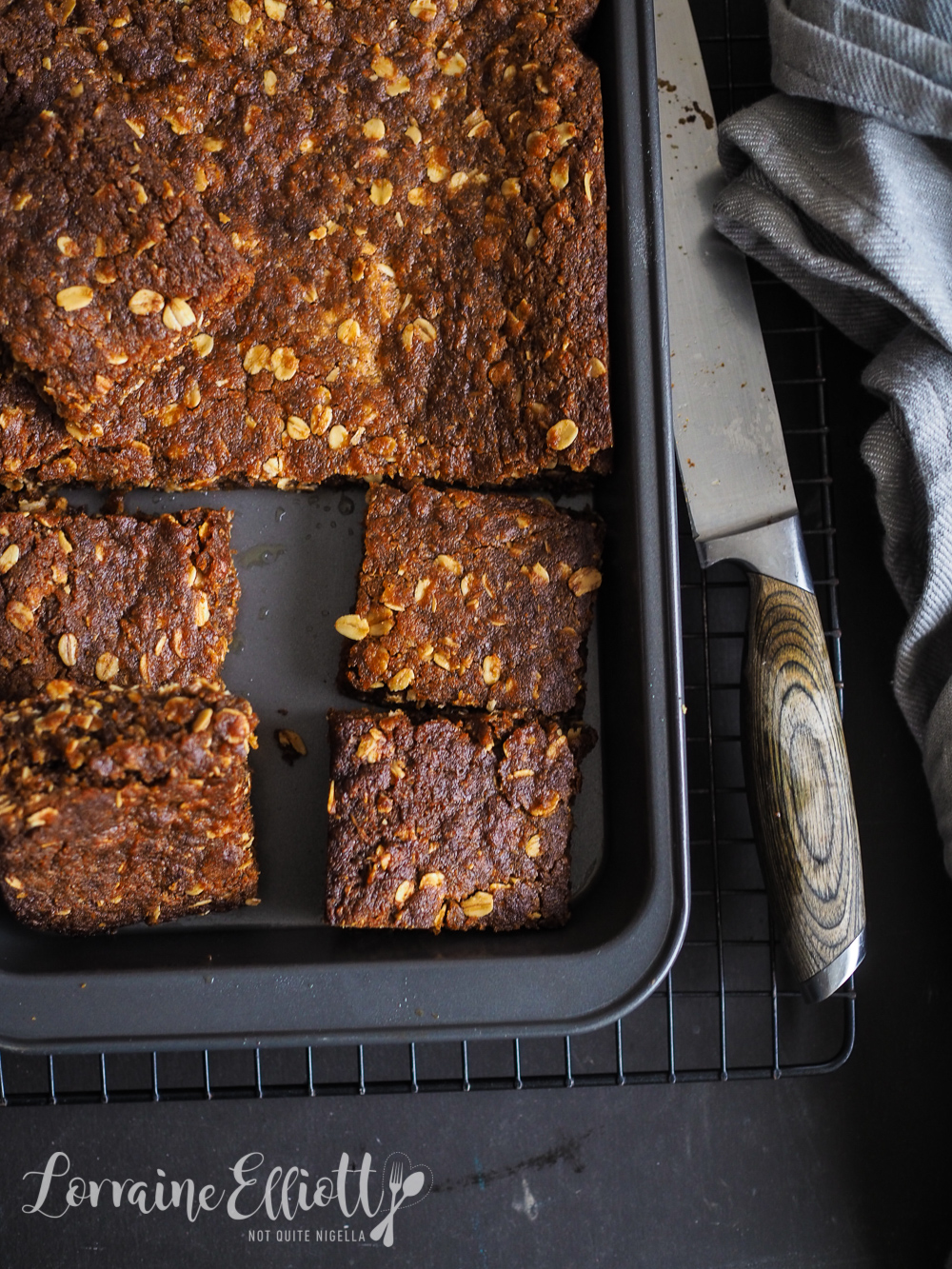