The Softest Passionfruit Melting Moments That Will Melt In Your Mouth! 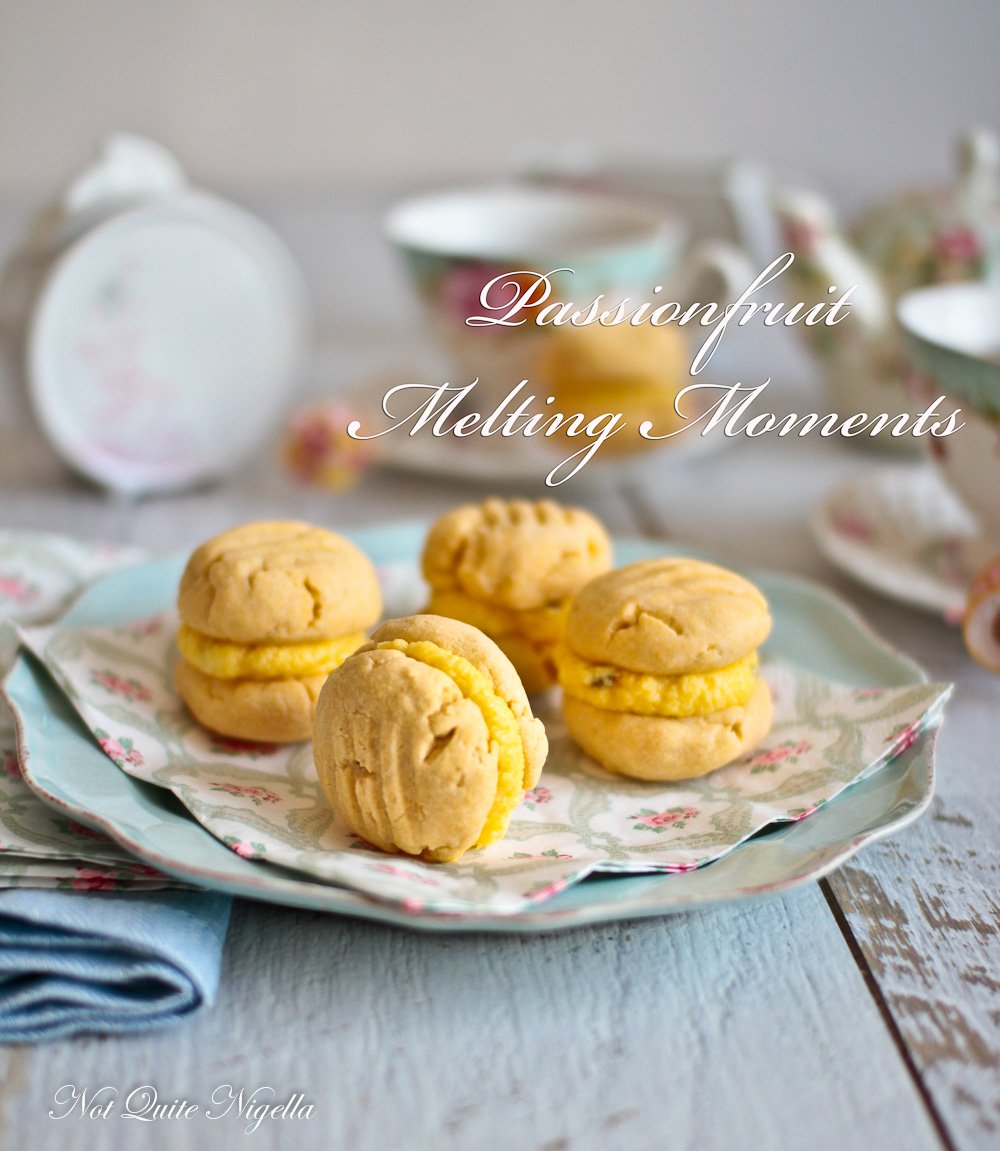 This recipe came out of sheer greed. Melting Moments are one of my favourite cookies. There's something just so moreish about the delicate and uniquely textured cookie. And over the space of a few days I went on a pursuit to find the ultimate melting moment recipe. As I've mentioned before I have the food memory of an elephant and a few years ago I had eaten a melting moment with the most gorgeously short texture. I wanted to replicate it and make a passionfruit version. The perfect passionfruit melting moment if you will.

Sometimes called custard kisses they seem to be predominantly an Australian and New Zealand cookie. You find them at cafes all over Australia in jars by the espresso machines or the pay counter. Some are crumbly and crisp but the one that I had was gorgeously short-even on the verge of powdery. And that's what I love about them. They literally melt in your mouth. They're the perfect tea biscuit really as they are best eaten one bite chased by a sip of tea and so on and on until you reach for another. And while they are gorgeous as plain vanilla cookies my favourite version is using fresh passionfruit, lemon or raspberry.

And I think I had it after a few attempts! The key was to make these as short as possible so I used a mix of half half plain flour and custard powder. Custard powder is essentially cornflour or cornstarch with sugar and vanilla flavouring. This very soft flour produces that gorgeous melt in the mouth texture. I baked so many lots all at different temperatures and I found that they all really varied in the outcome. At 160C/320F they were soft but a little "raw cookie dough" in flavour. I think at 180C/350F they were just right. 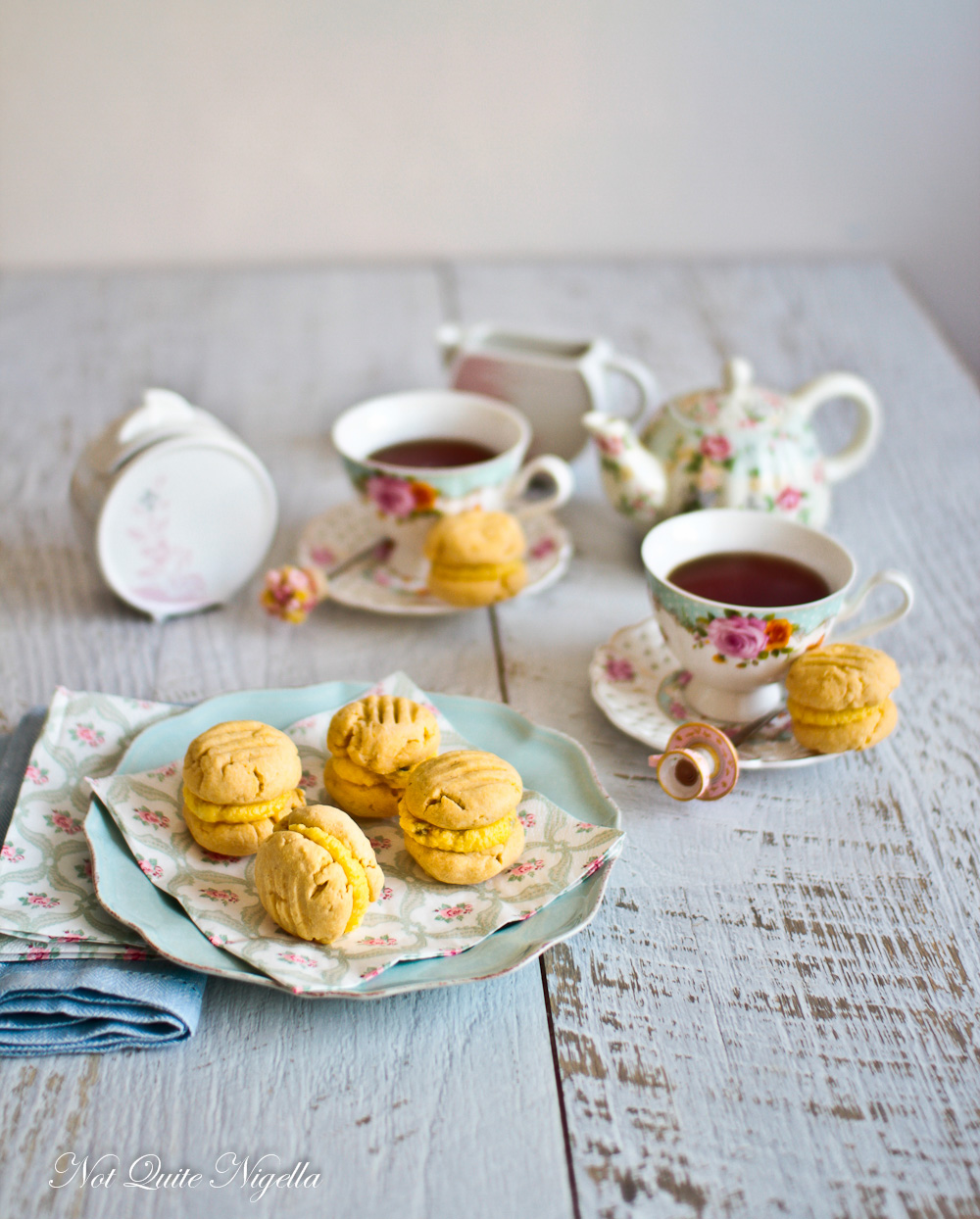 I was on a high after making my final batch of these (a sugar high as well as a high of elation) when I bounced into a session with my personal trainer Nina. I was surprised - for once she hadn't bombarded my phone with messages about why I was late. You see she was too busy staring at her phone, deep in concentration, her brow knitted with a puzzled countenance on her face. She handed me her phone.

"Can you read this joke and tell me if you think that it's funny or not?" Nina said. It was her fiance Garth's birthday coming up and she wanted to wrap his gift in a riddle that he had to solve in order to open his gift. She was looking for a riddle that would reflect his interest in quantitative finance. The only problem was that she didn't quite know what he did for a living, only that he really, really, really loved maths. "I looked up some quant riddles and they came up with this," she offered. "Garth thought it was funny but I don't get it."

I looked at the joke. "Is there a punchline missing?" I asked her. I didn't get it at all. I promised to show it to Mr NQN when he got home. He also loves numbers and calls himself a nerd so I wondered if he would he get the joke. A few seconds after I sent it to him I heard him chuckling away in the other room. I messaged Nina, "He thought it was funny. They be craaaazy," is all I could say while munching on one of these cookies. 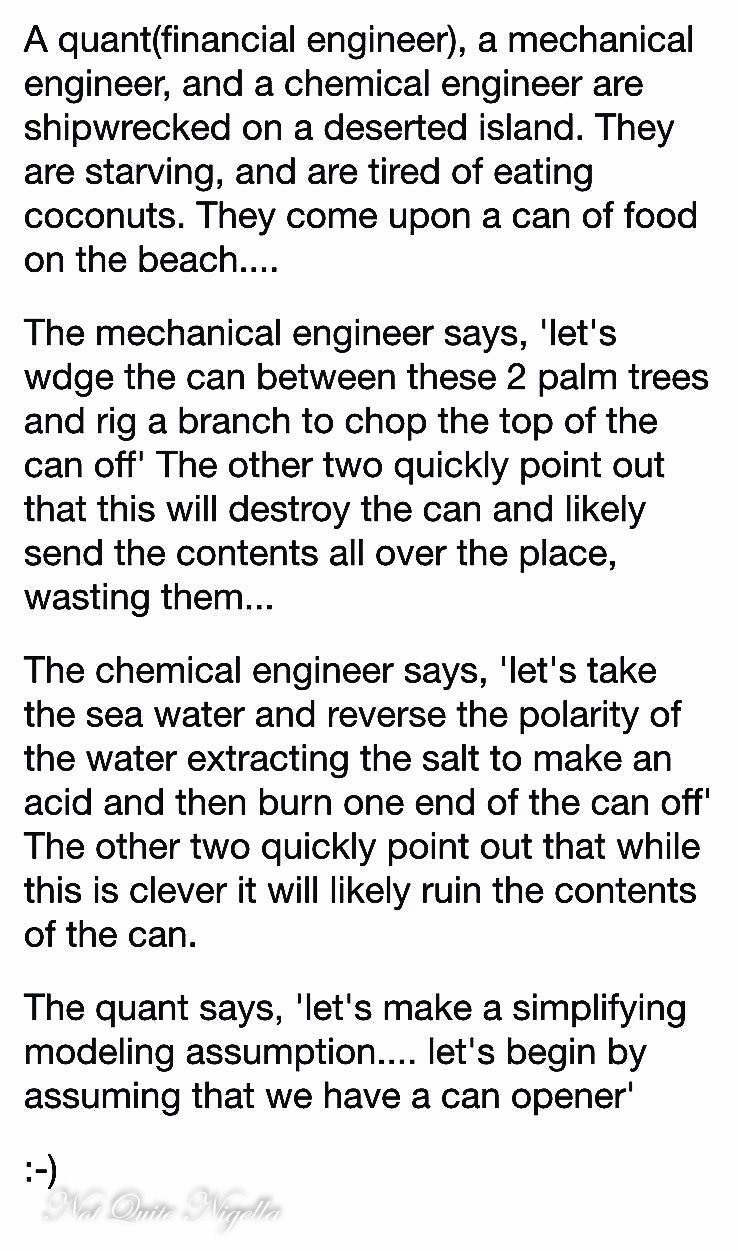 P.S. This is the joke

So tell me Dear Reader, do you like "short" textured cookies? Do you prefer classic vanilla or lemon, passionfruit or raspberry? And did you find the joke funny? 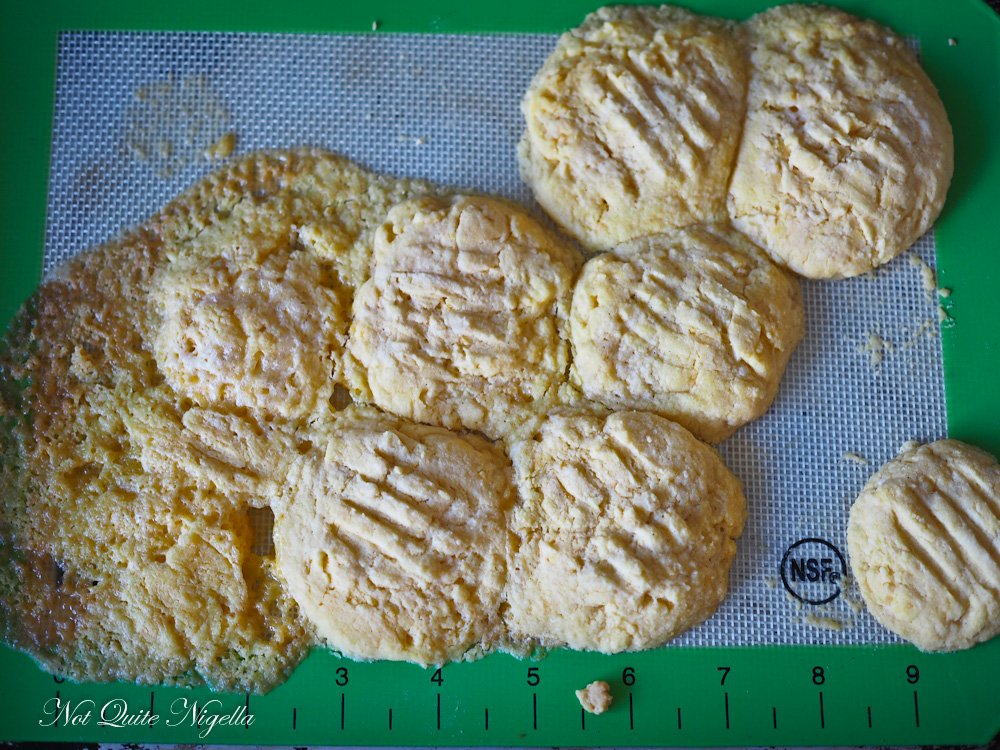 One of the fail batches. I go through a lot of butter in this household! 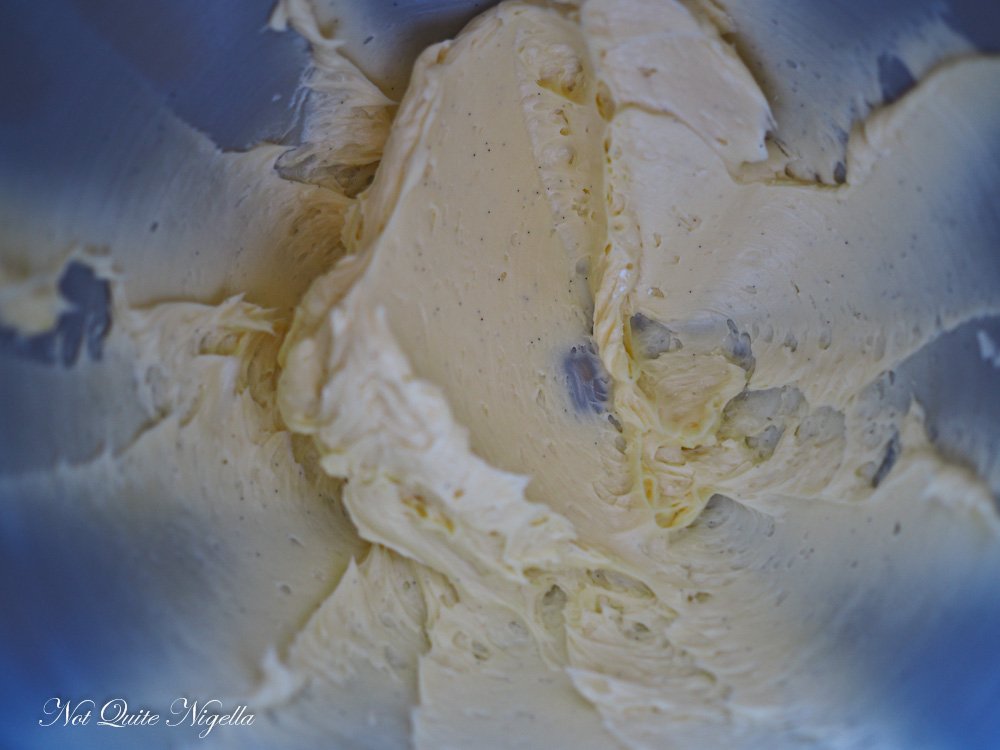 Step 1 - Preheat oven to 180C/350F and line two baking trays with parchment. Beat the butter, icing sugar and vanilla together until pale and fluffy-about 3 minutes. Sift in the custard powder and plain flour and 1-2 tablespoons of milk and mix in on the lowest speed or by hand. 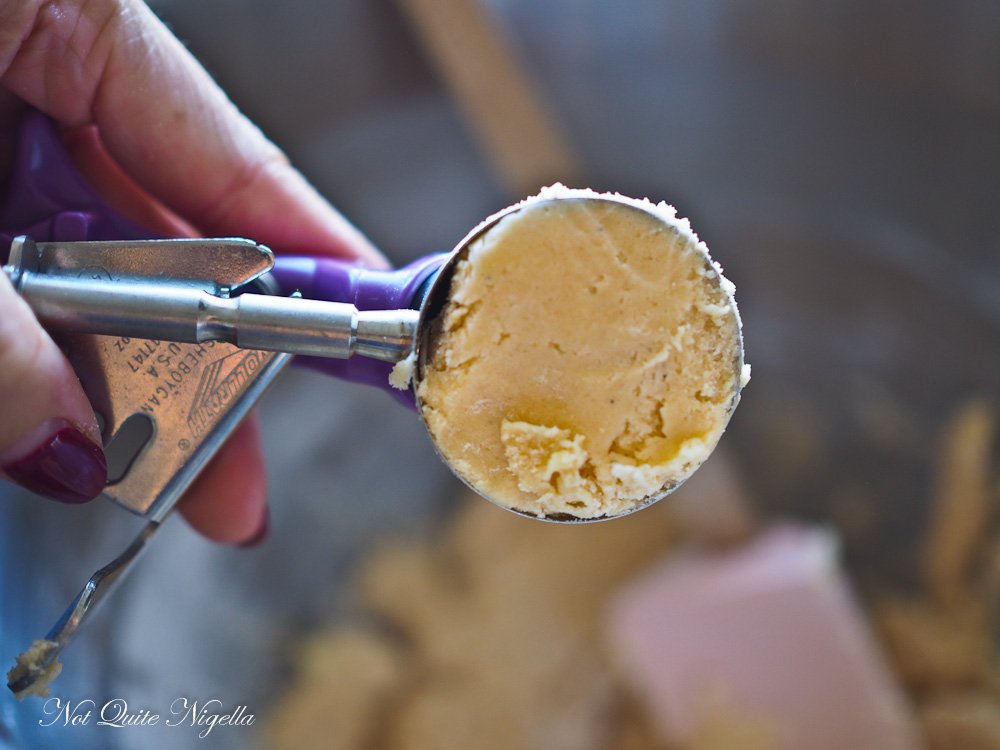 Step 2 - Shape into balls around the size of two teaspoons - I used a small ice cream scoop (not a regular one or they will be gigantic). Set them an inch or so apart, they won't spread much. Take a fork and press in the tines to indent. Refrigerate for 15 minutes (this prevents cookies spreading). 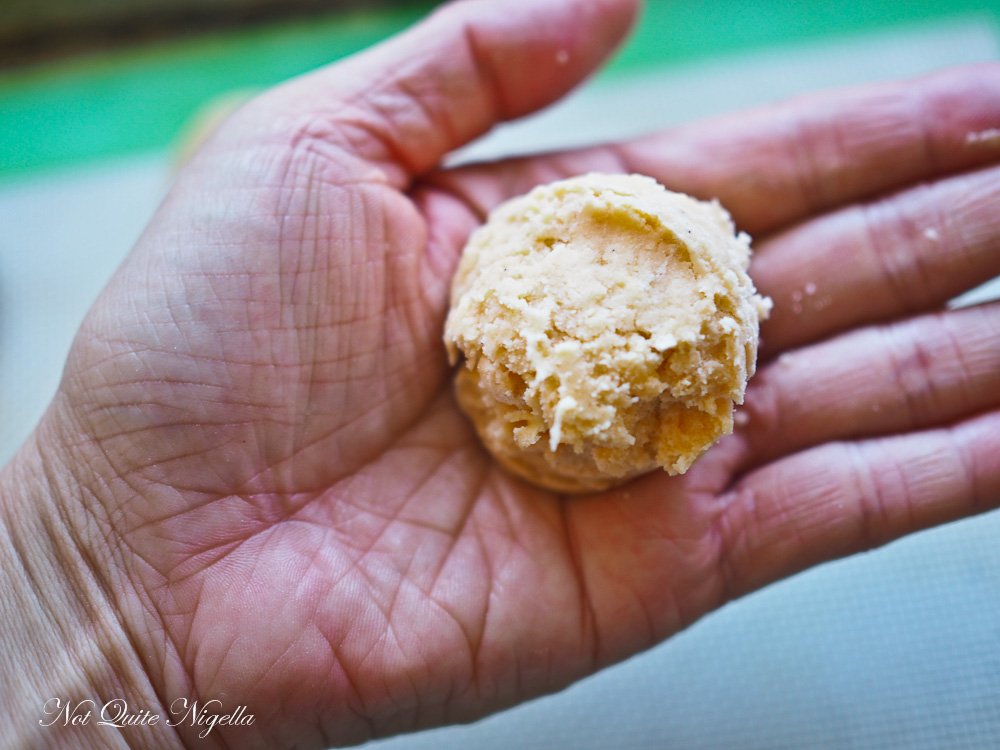 Step 3 - Bake for 18 minutes on the lowest rack of the oven. Cool completely and sort into similar sizes. Make the buttercream by beating the buttercream ingredients together. Pipe into the centre of the cookie and sandwich together. 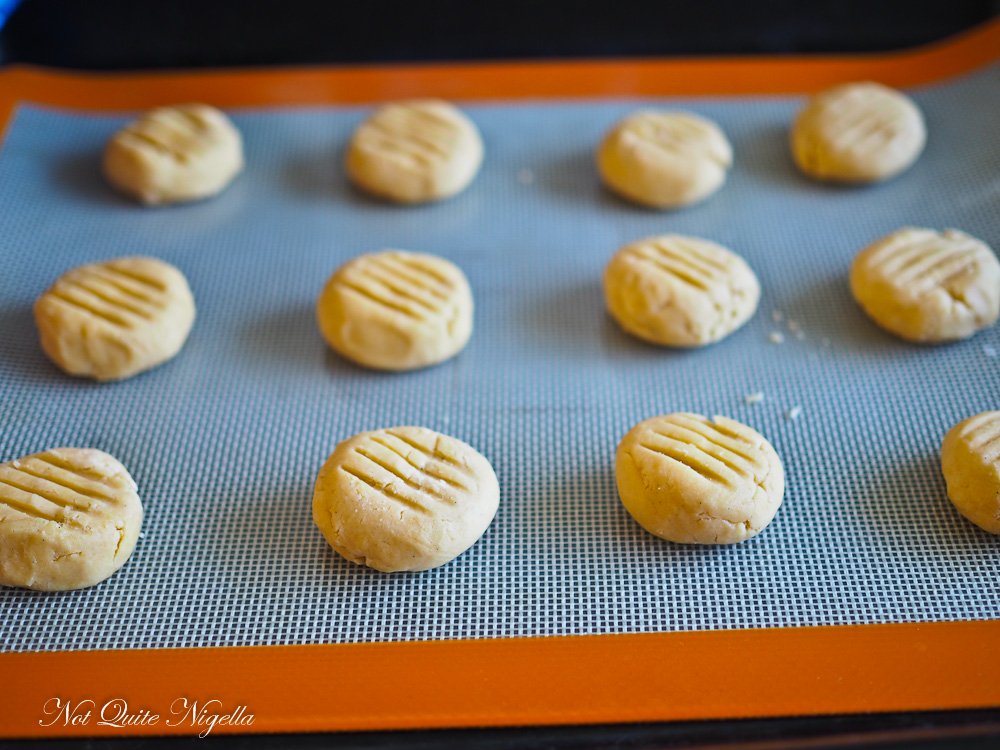 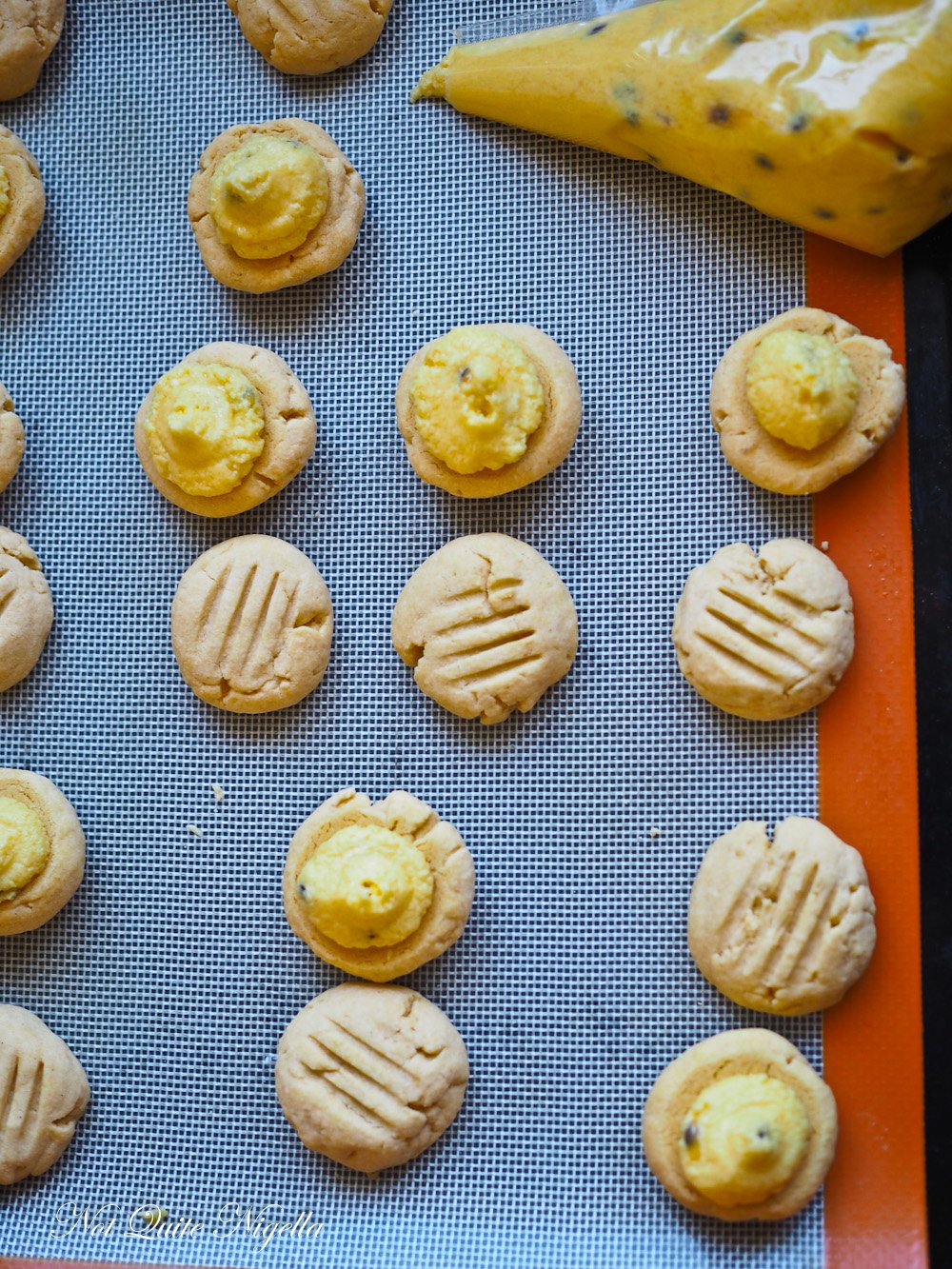