Hop to It at Hopper Kadé, Sydney 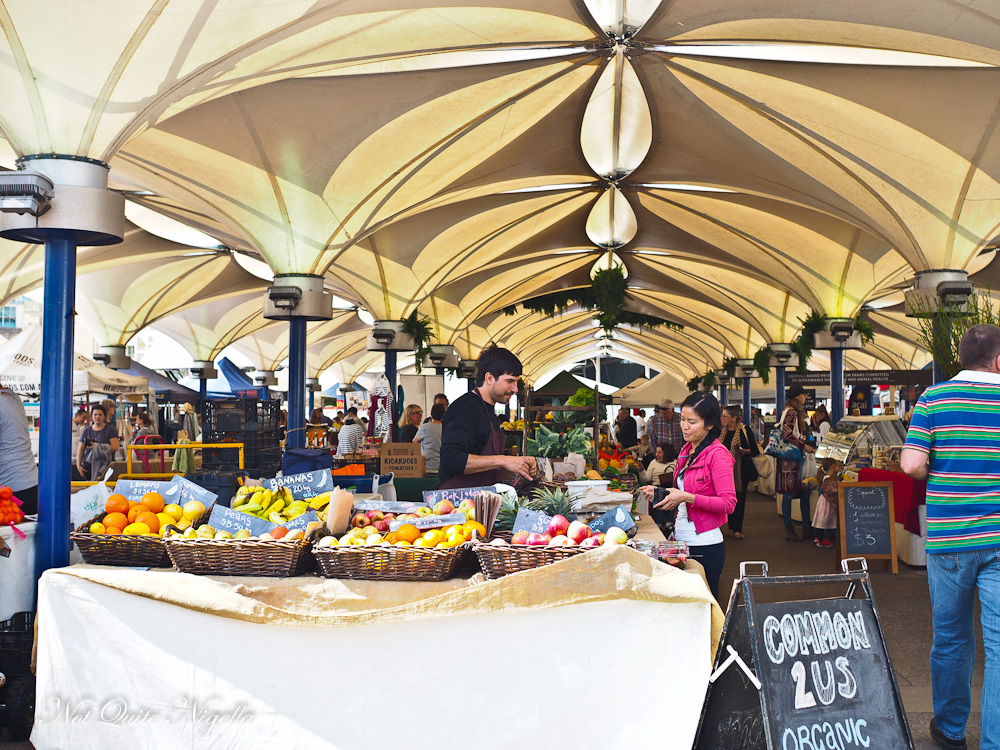 I've always said that my readers are the best. They are the most generous, non judgemental souls and when I've met them we've fallen into an easy conversation about food. Recently a Dear Reader Romany told me about a Hopper place in Sydney called Hope Kadé. Hoppers are a Sri Lankan food that are like a round crispy pancake with a slight upturned bowl edge. 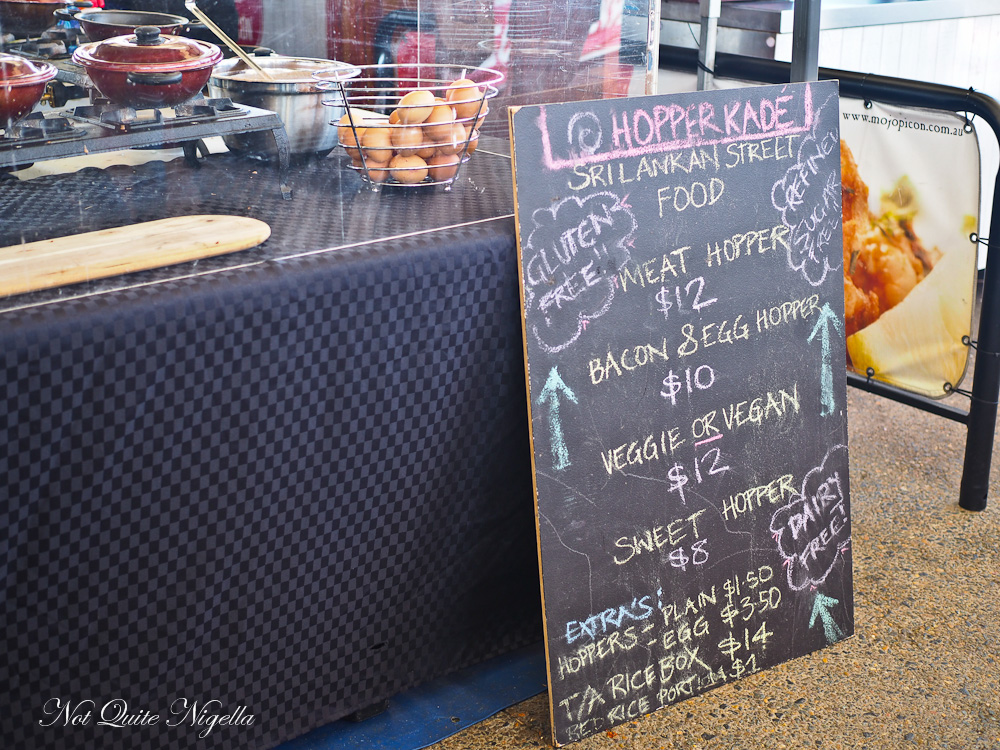 With my favourite non gluten eater friend Nina in tow, I went to check out Hopper Kade at Fox Studios markets (they also appear at the Orange Grove and Kings Cross Markets). "Hopper Kadé" translates to hopper street stall. The market area is very busy on Wednesdays, for some reason I had expected it to be quieter but almost all the tables are taken. People are buying produce, meat, bread and flowers or something to eat for lunch. We find Hopper Kadé amongst the eateries. It actually doesn't have a huge queue compared to the others. 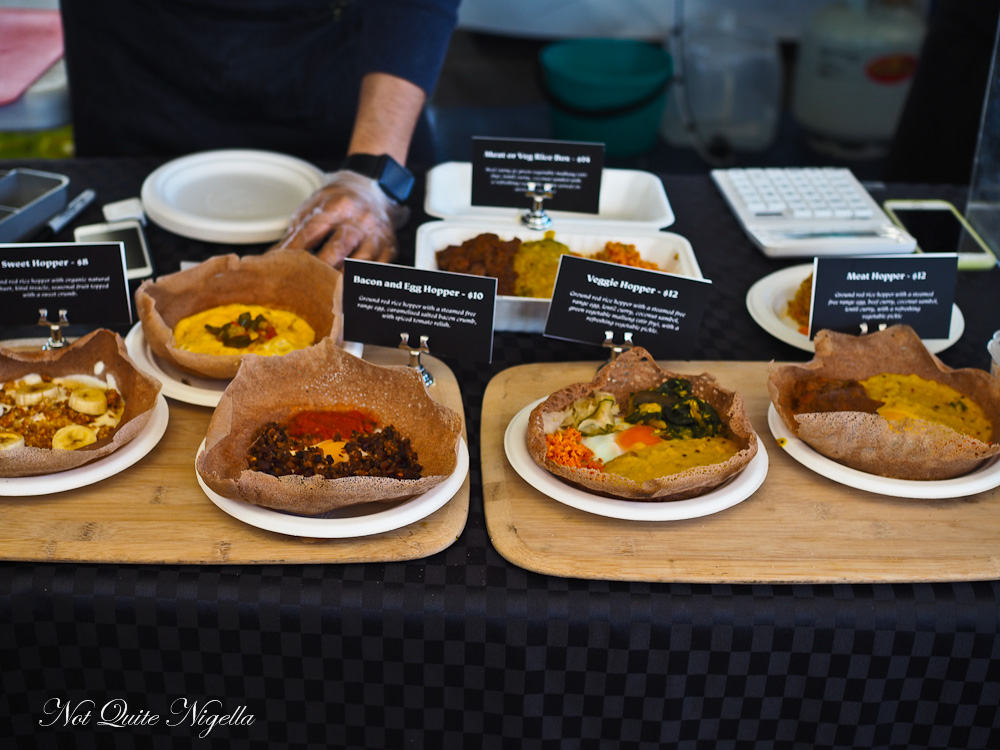 Hopper Kadé is run by an ex Masterchef alum Kumar Pereira with Ruvane De Zoysa. Kumar isn't there but Ruvane is and she explains that the batter is made out of fermented red rice flour and the process takes three days to make the batter. 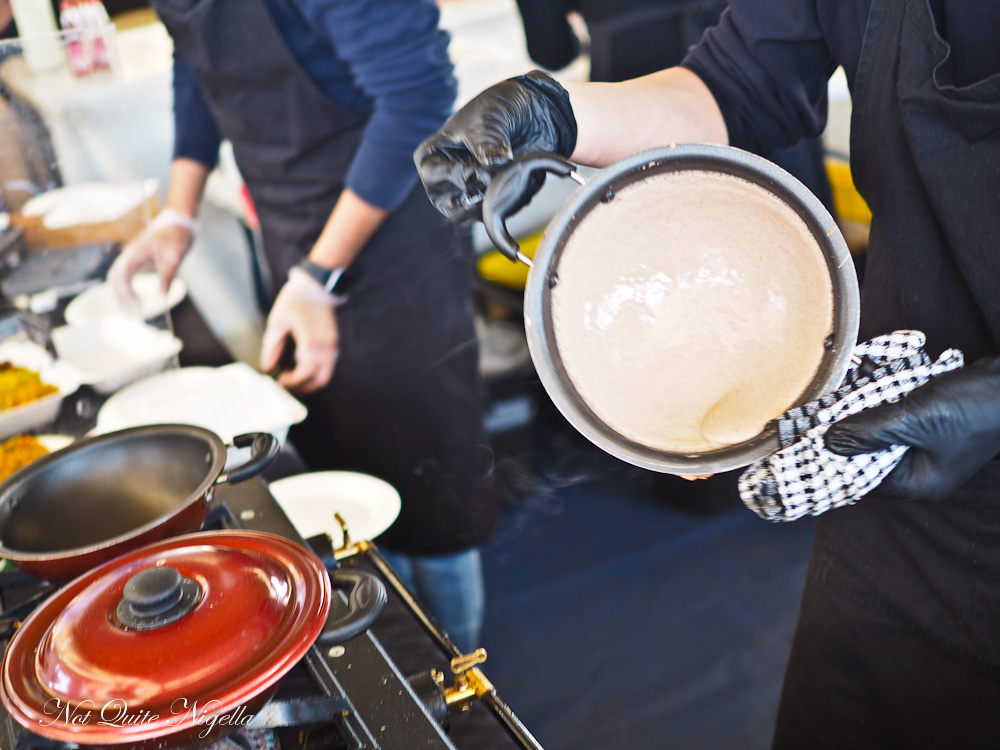 The slow fermentation process is said to be better for your digestive system as fermentation removes most of the phytic acid which allows for minerals like iron to be more readily absorbed and there's a bonus as these are gluten free too. Like sourdough, it has a "mother" or starter and the mother for this batter is one year old. 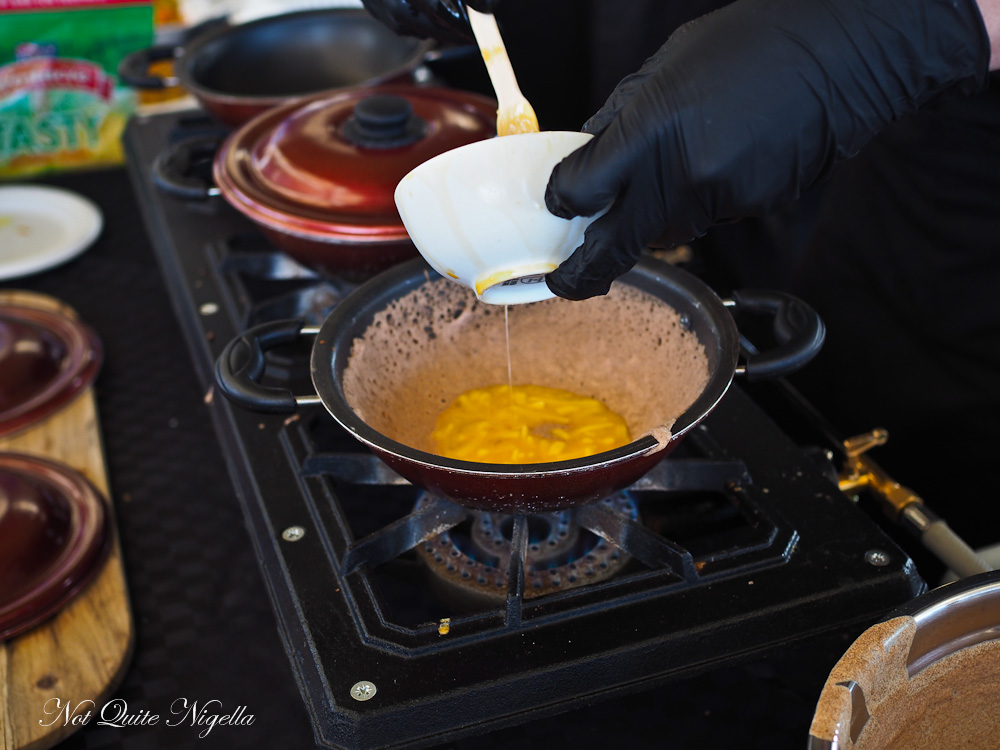 Do you ever want to say, "I'll have one of everything?".a Well we ordered one of every hopper and there are five kinds (plus a rice meal with four different toppings). Nina is having the two vegetarian ones (and there is one vegan choice) while I try a bacon and egg one and a meat hopper and we share the dessert hopper. They're kind enough to give us a little discount for buying so many too. 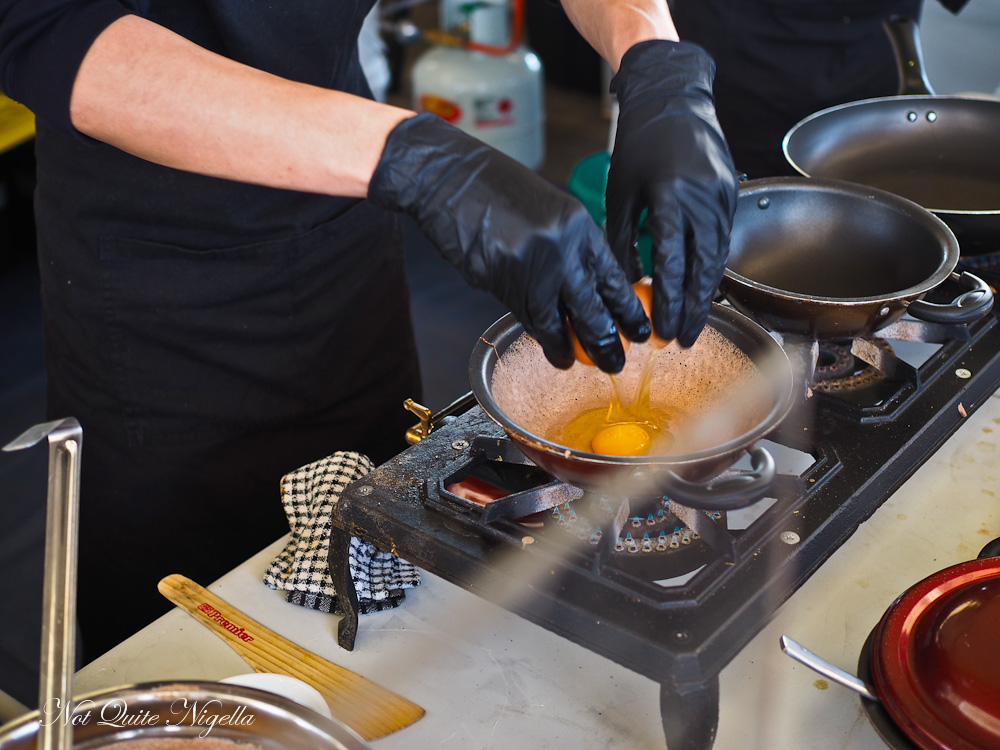 We watch as they ladle some of the bubble rosy shaded batter into the non stick bowl frypans. These are then cooked until crisp and then filled with an assortment of fillings. Each one is made to order and served with a wooden fork. 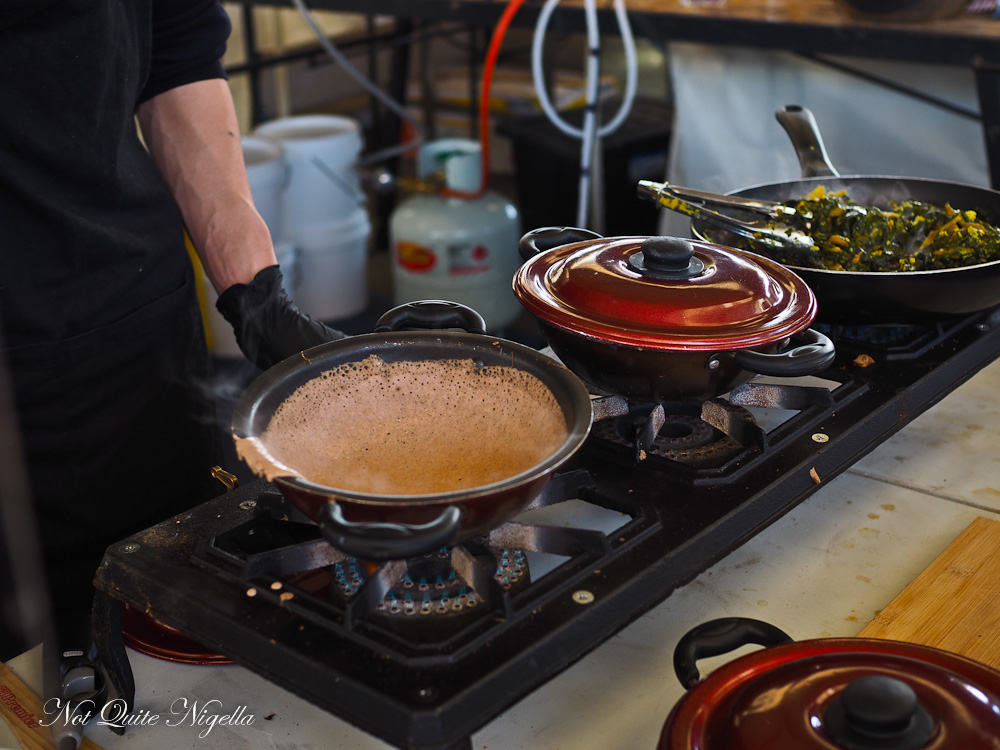 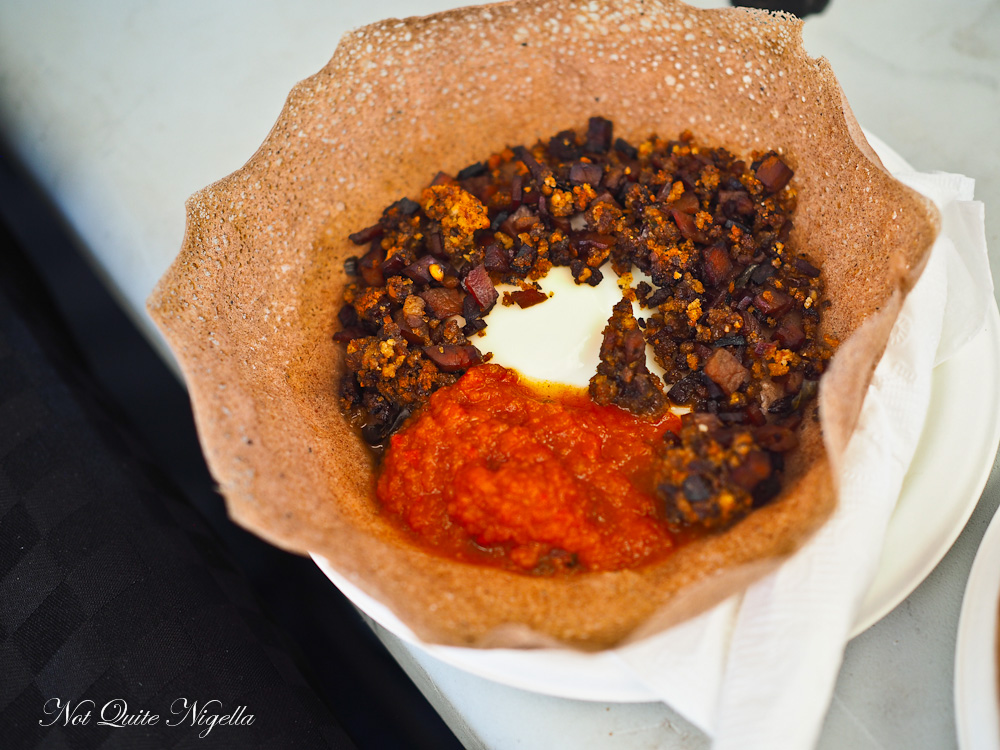 I try the bacon and egg hopper-not a traditional hopper but something to bridge the gap of Sri Lankan and Australian culture. Actually eggs are common in hoppers and these come with free range eggs and a caramelised bacon crumb sweetened with kitul treacle, chilli, curry leaves, and spices and an oven roasted tomato sauce on the side. You're supposed to eat hoppers with your hands like a roti or naan. 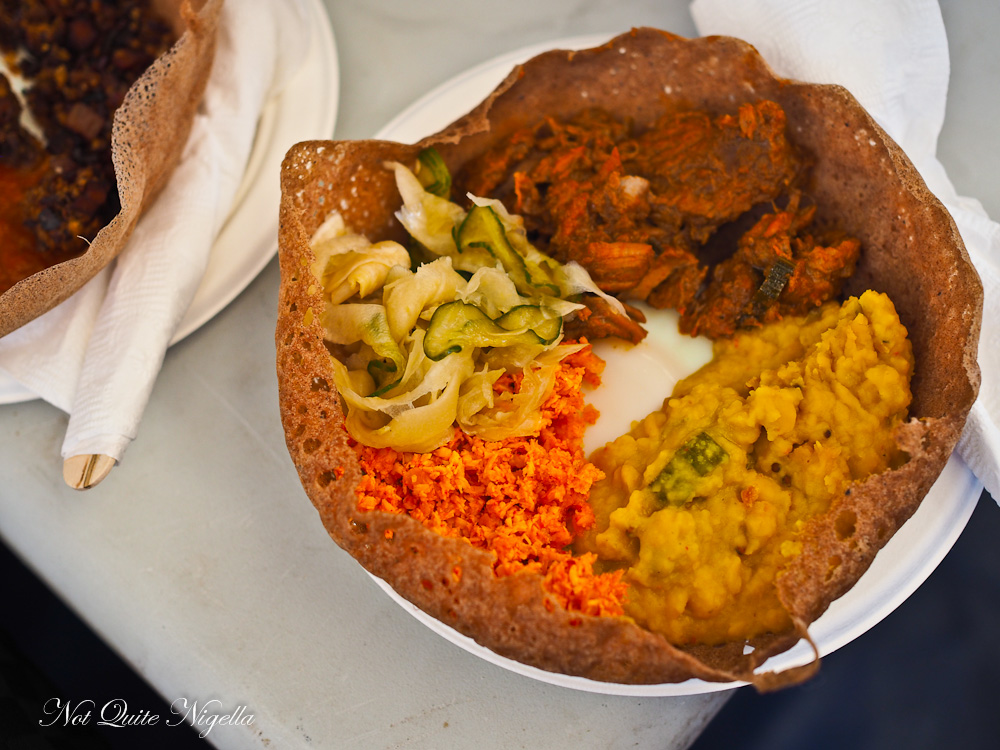 The meat hopper has a bit of everything to it including an egg, soft cooked beef curry, green mallung (stir fried greens with coconut and spices), dahl, pickles and orange coconut sambol. I think I prefer this slightly more to the bacon and egg one but both are good. Also the batter has a bit of cinnamon or cassia added to it which gives it a sweet edge which can be a bit strong with savoury ingredients. 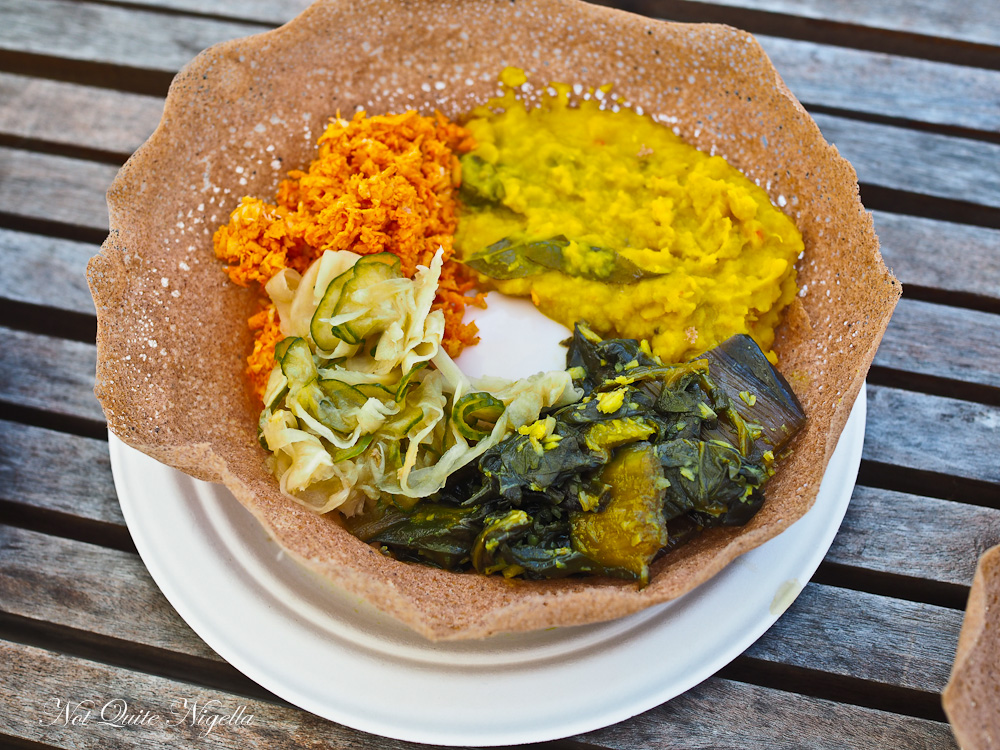 Nina's vegetarian hopper has an egg poached in a red rice hopper topped with green mallung, dahl lentil curry made with turmeric and coconut milk), pickle and coconut sambol. 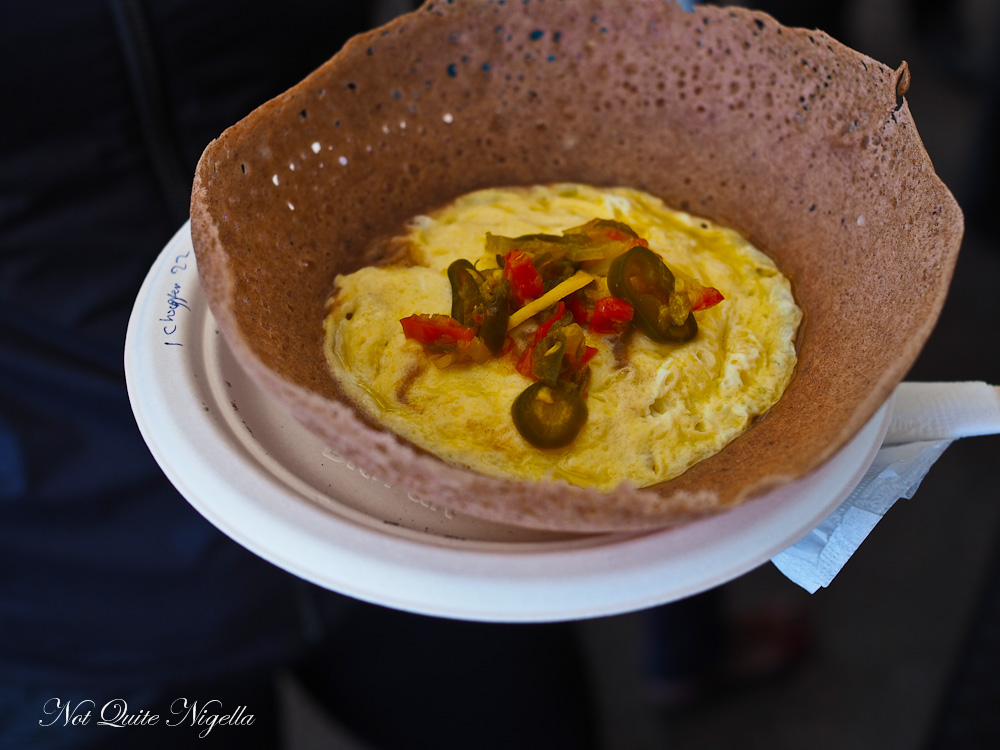 There is one hopper that neither of us really went for and that is one with egg at the bottom and a chilli sauce. We were warned that it was spicy but it wasn't and needed a bit of something to pick up the flavour. 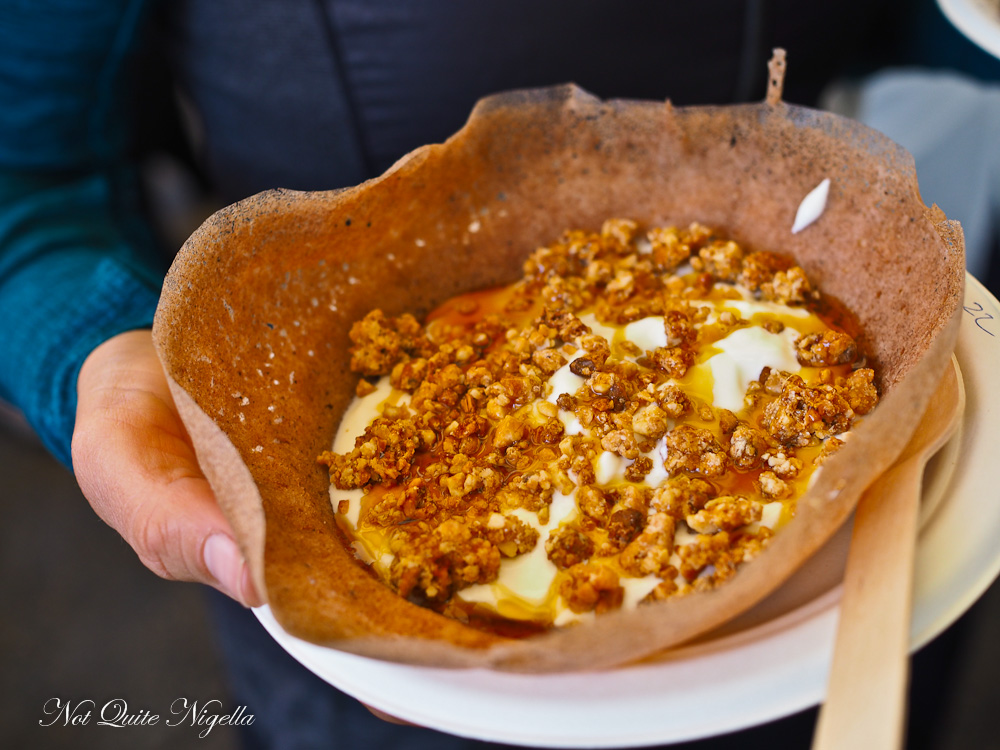 The sweet hopper has organic yoghurt, kitul treacle and a caramelised cashew crumb and out of the five hoppers, the meat one and the dessert hoppers are my favourite. Also the cinnamon batter complements the sweeter filling.

So tell me Dear Reader, have you ever tried a hopper? Which hopper appealed to you the most? What would you put in a hopper?