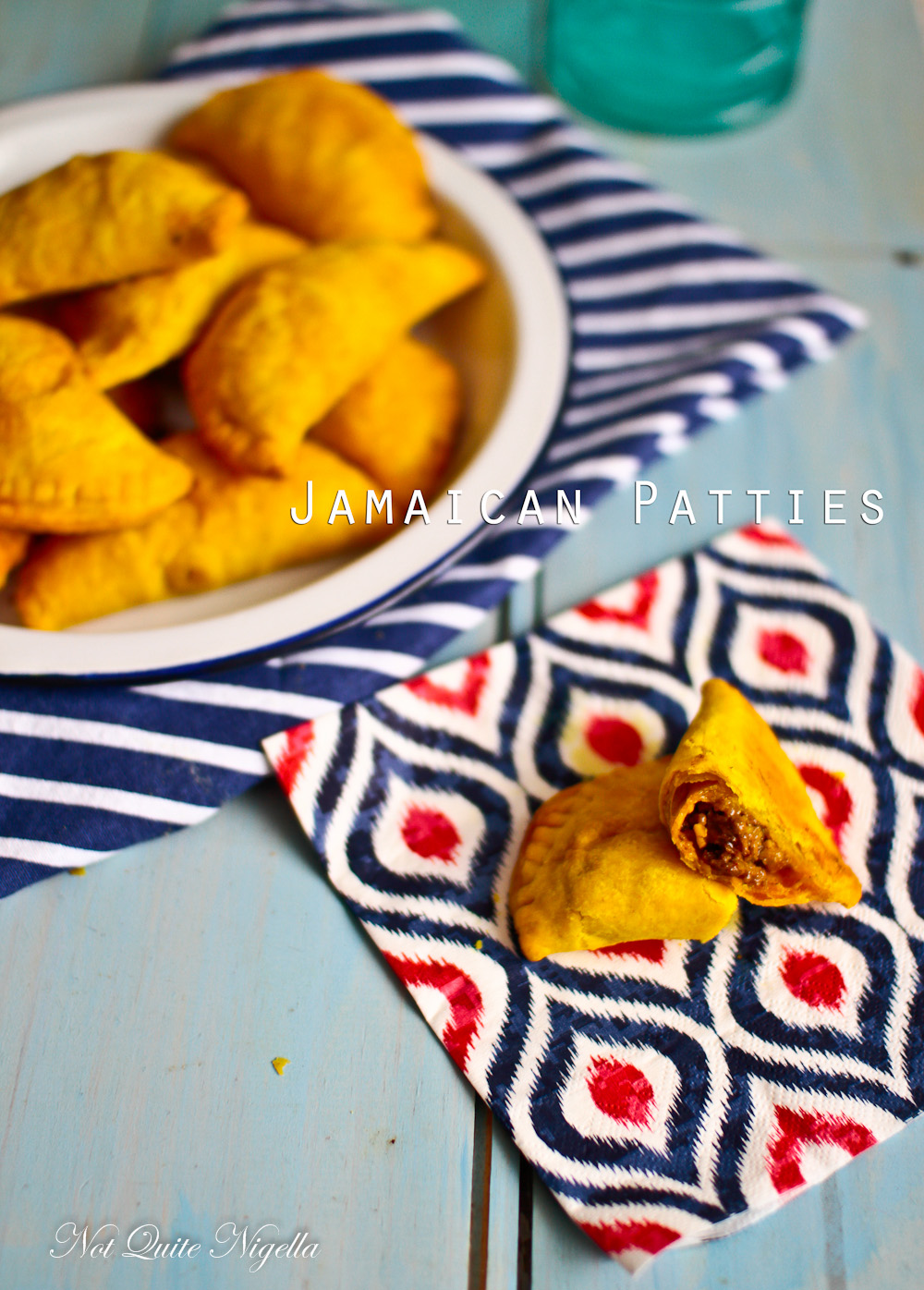 Many countries have their version of a hand pie, pastie or puff. Jamaica has the Jamaican Pattie. Like a cross between a meat pie and a curry puff it is one of the most delicious snack foods you could have come across. The pastry is yellow from the turmeric and is a breeze to make in a food processor. The filling is a spicy, saucy beef mince that will make you want another. Save this for when you want to seriously impress a crowd (and they also make for a great lunchbox snack too). And yes this is a pushy recipe!

Admittedly I first tried one in the very unJamaican setting of Ottawa, Canada. I was visiting a butcher that was selling these. They had a variety of filling but the one that I tried was a classic beef one. It was so delicious, the pastry soft and buttery and it was generously filled with spiced beef mince. I put it in the mental list of things to make and it was only when someone mentioned Jamaican food that I recalled my memory of it the very Jamaican pattie in the very unJamaican setting.

Jamaicans have a reputation of being chilled. I've only met a few in my life and there was a definitely and air of being chilled and calm. Actually the main thing I remember about the Jamaican people that I met was that they loved cricket above else but I am digressing here. 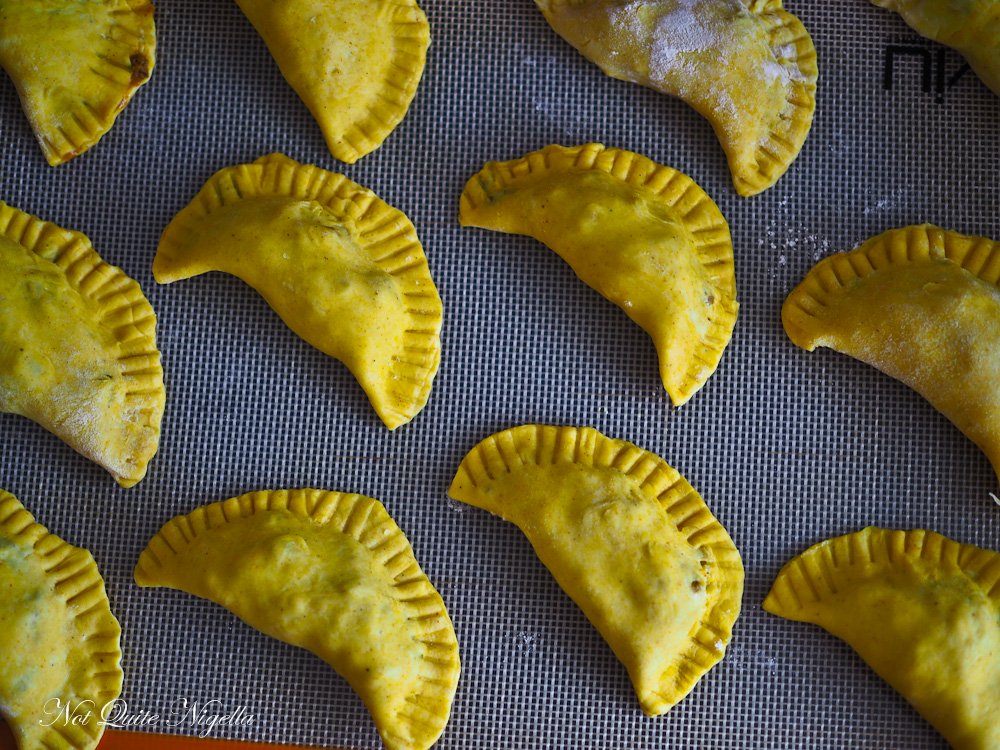 I was chatting to a friend of mine Sheriden recently. We were talking about people being chilled and about contentment vs happiness. I told her that I was happy most of the time but contentment and being satisfied with what one has probably eludes me most of the time. I think it's because we live in a highly competitive city where people look at the car you own and your house or apartment and that is important.

I've had someone remark my apartment is "very modest" (read very small and not well decorated, it's true) and now I am now a bit hesitant to have people over except for my closest friends who have already seen it. And I must admit I sometimes see an acquaintance's huge home in an upscale neigbourhood and wondered how on earth they can afford the mortgage payments. Especially if they're your peers and seem to be on the same career path as you. Sheriden suggested that it was a uniquely Sydney thing which could be absolutely true.

I'm not saying that these Jamaican patties could really give one chill and contentment but it's worth a try no? ;)

So tell me Dear Reader, do you have happiness or contentment? Do you ever wonder how people have the amazing houses that they do? Have you ever tried a Jamaican pattie? 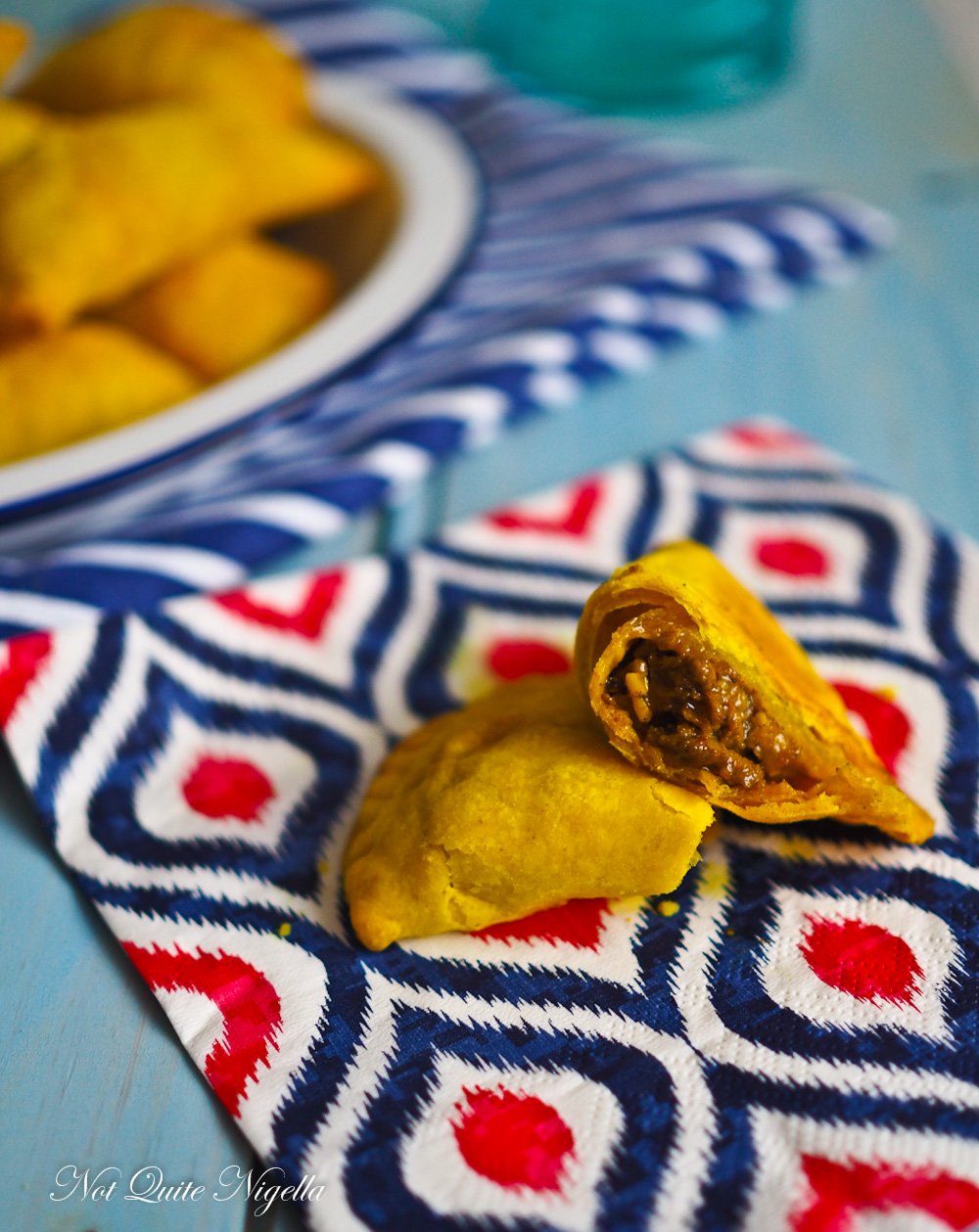 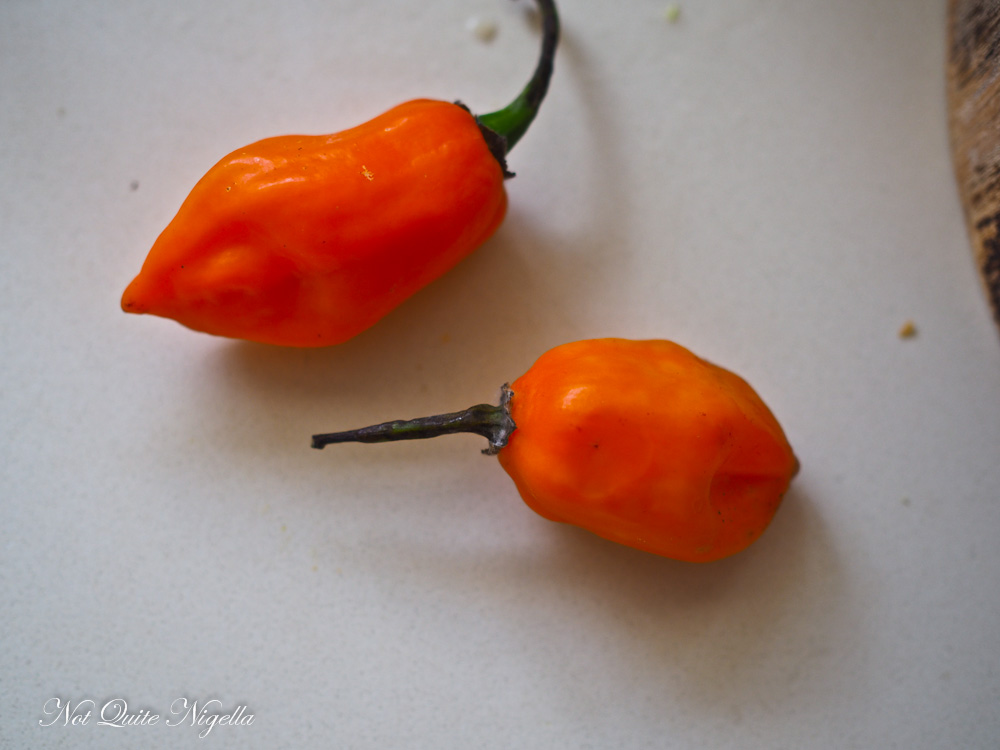 *It may be difficult to source Scotch bonnet chillies. These are habanero chillies that are similar but Scotch bonnets are slightly sweeter.

Step 1 - First make the dough, place the flour, salt, turmeric and curry powder in a food processor and whiz for a few seconds to combine. Add the butter and shortening and pulse until you get a sandy texture. Add the water and vinegar and pulse-it should be like damp sand and with a minute kneading, come together to form a dough. Split into two balls and cover with cling film and rest for 1 hour at room temperature. 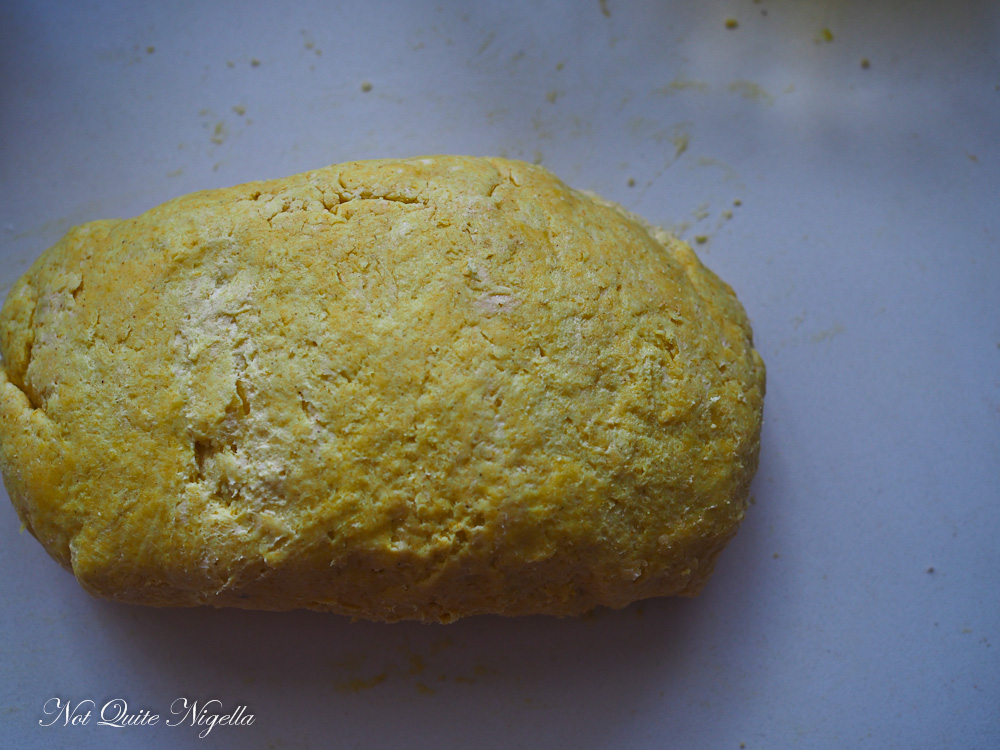 Step 2 - Meanwhile make the filling. Add the oil to a frypan on high heat. Add the onions and garlic and saute until fragrant. Add the curry powder, cumin, paprika, turmeric and all spice and fry for 1 minute. Then add the beef and break up with the turner making sure that the beef is coated in the spices. Add the chillies, half chicken stock, breadcrumbs, salt, pepper, bay leaves and thyme and simmer until beef is cooked through. Spread out on a tray to cool. 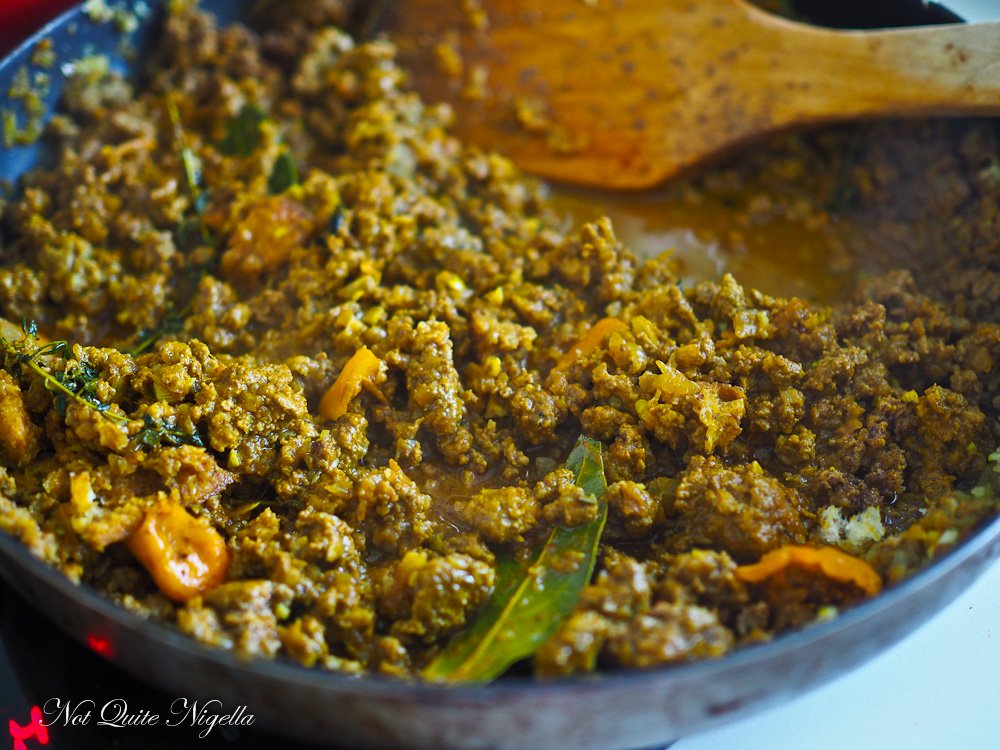 Step 3 - Preheat oven to 205C/401F and line four trays with parchment (this makes a lot!). Generously flour a large clean surface and roll out one ball of pastry-you want it 3mm/1/8 inch thick. Cut out circles-I used 10cm/4inch rounds and place a heaped teaspoon of cooled filling. Fold it over and press down securely. Then use the tines of a fork to press down further. Bake (unglazed) in the oven for 20 minutes. 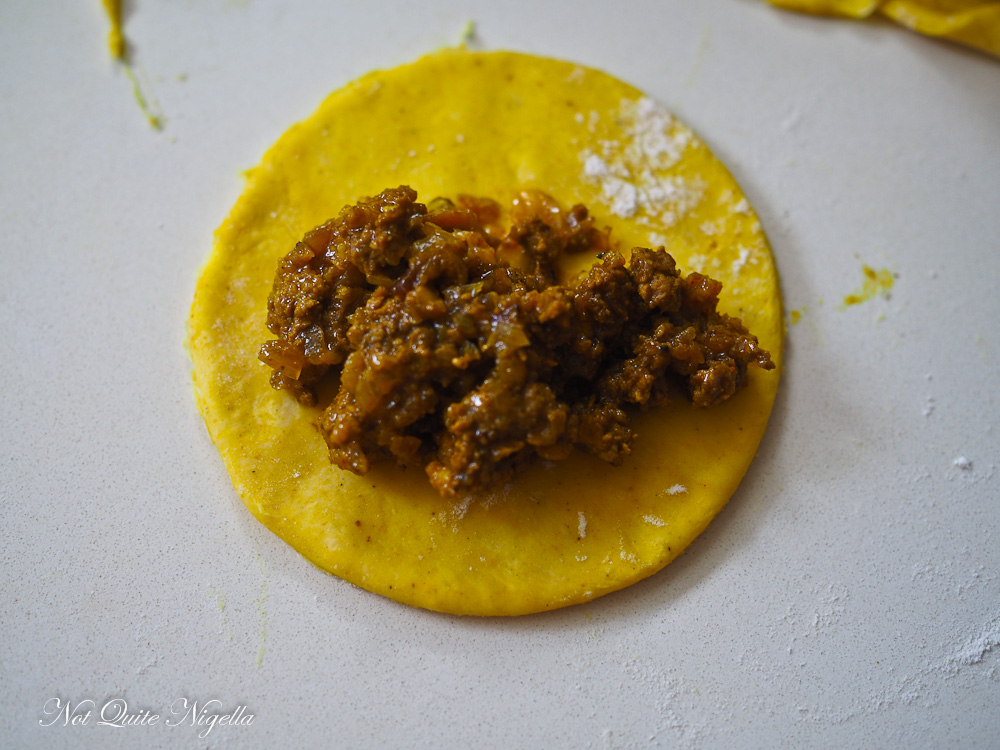 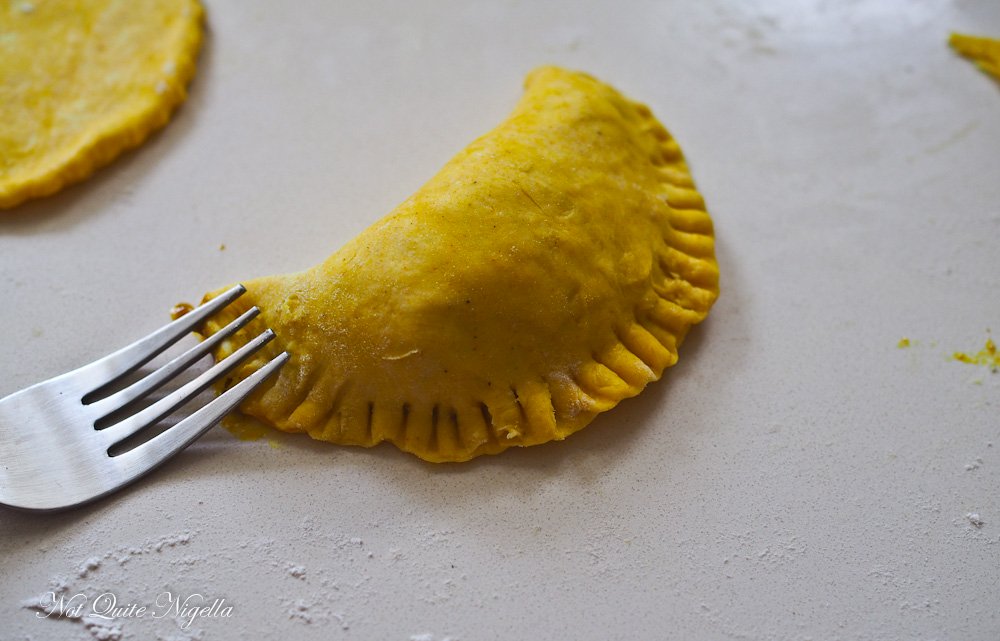