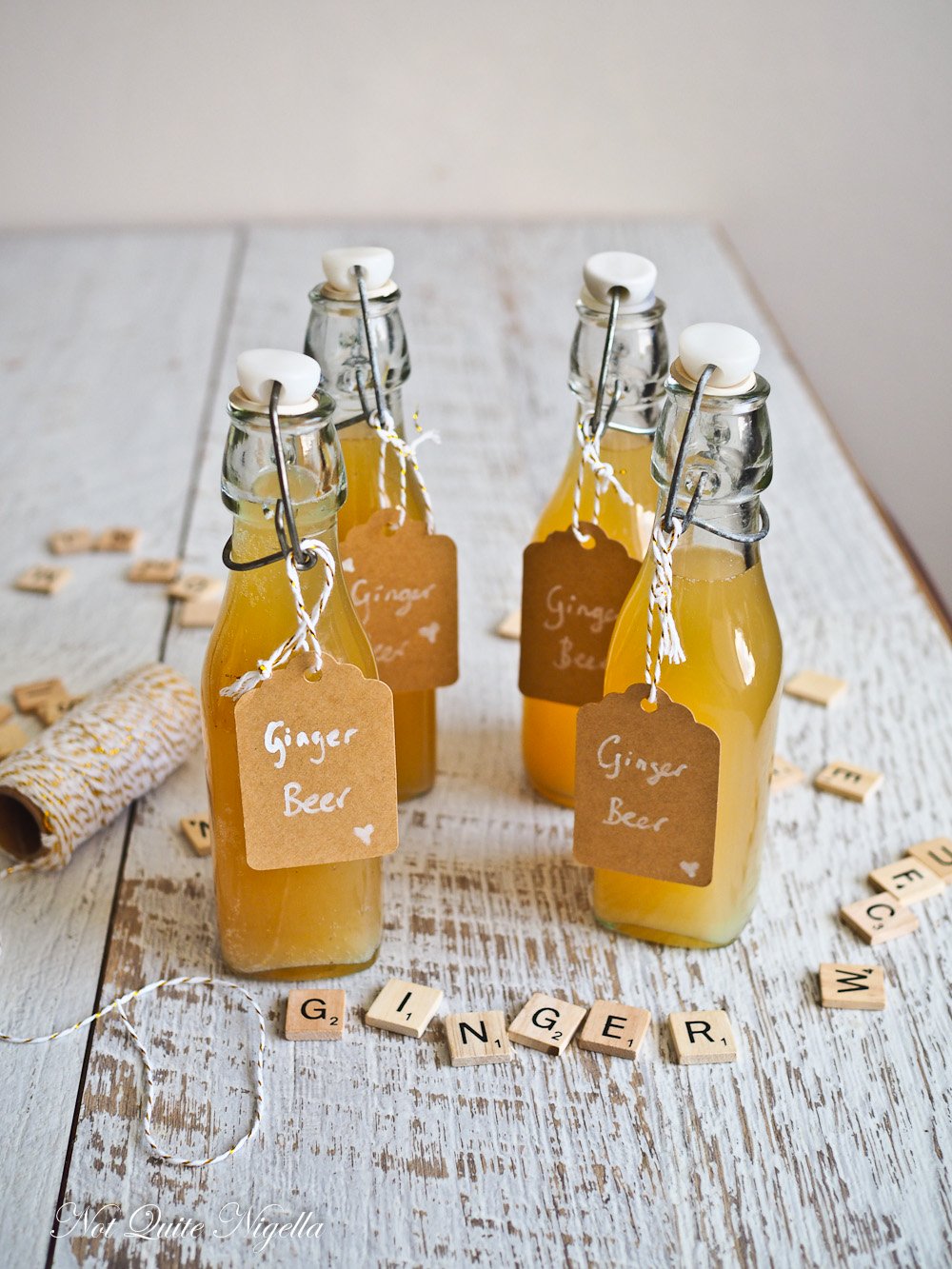 If you love your ginger beer throaty with a gutsy finish then making your own ginger beer can be a delicious and exciting venture. The best thing about it is that you can also ferment your drink for natural carbonation. This concentrates the flavour rather than adding soda water to a ginger cordial. You can drink it within a few hours or the same day for a delightfully sparkling drink! This is also perfect if you're going to make it into a Dark and Stormy too.

I look at ginger beer like a man. Sometimes you go for a husky, deep voiced man, sometimes you like someone cute or a pretty boy. I like my ginger beer throaty with personality over lightly flavoured sugar water. But the good thing is that you don't really have to choose. You can make your ginger beer however you like it. If you like only a touch of ginger that's fine too and you can just omit the chillies if you don't want that throaty quality.

This ginger beer is easy enough that it can be drunk on the same day that you make this or you can take this further and make it more fermented and alcoholic. I used champagne yeast in this but you can also start using a ginger bug but really I didn't want to wait very long for my precious ginger beer. I've also tried a batch with regular dried yeast and although some people are against this, it still tasted great because of the amount of flavour in a ginger beer (although I wouldn't recommend it for something like sparkling wine). You don't have to carbonate this ginger beer, it's delicious on its own but there is something a bit magical about producing carbonation. 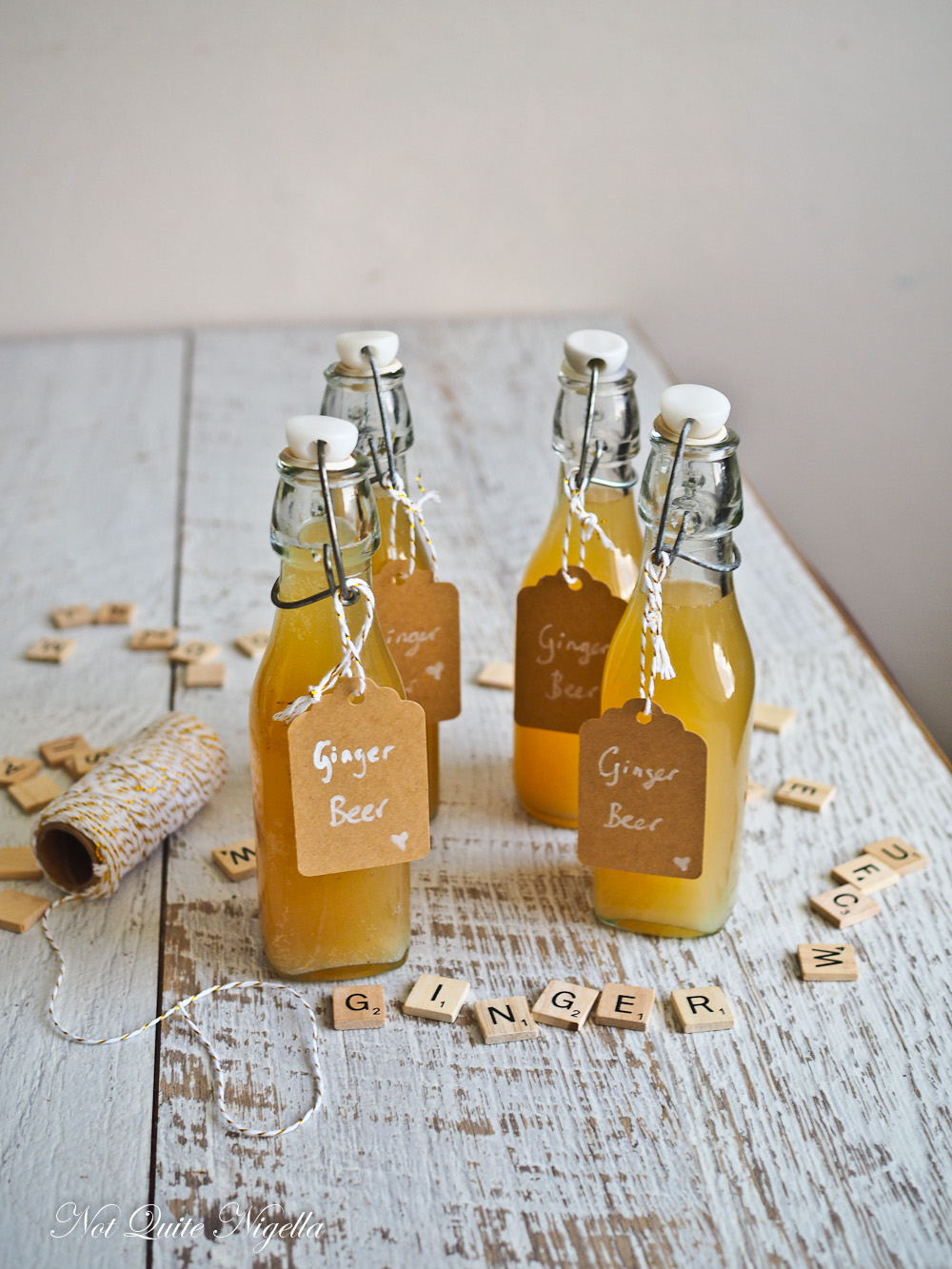 I think I scared Mr NQN one night because I had all of these things happening in my kitchen. The ginger beer bottles started expanding with the carbonation and dried chickpeas I had soaking for falafel kept popping. He (and Mochi) thought that there was an intruder in the apartment and I had to explain to him that it was just crazy me playing with food and drink again and not to worry. We went to sleep with the sounds of bottles cracking and chickpeas popping and when woken up in the middle of the night with this errant noises his muffled voice would say, "Bloody chickpeas...".

The quantities of ginger and chilli below are for how I like it which is as I mentioned quite strong. Feel free to knock back on the ginger or chilli if you prefer it milder. It also makes a lovely Christmas present! Just be careful when giving it as a gift-it's best to store this in the fridge to stop the carbonation process or in plastic or swing top bottles to allow some carbonation to be released. If you are really worried, simply don't add yeast and give it as a ginger cordial gift. Please don't let this last warning put you off because making and drinking your own ginger beer is such a delightful experience to try at least once!

So tell me Dear Reader, have you ever made your own fermented drinks? Do you do much fermenting? And are you giving anything edible for Christmas this year? And how do you like your ginger beer? Mild or strong and throaty?

Preparation time: 15 minutes plus fermenting time (however long you want to ferment it, up to 2 weeks)

Tip: always start with clean equipment for fermenting as you don't want other bacteria to compete with yeast. Do not use glass bottles for safety reasons as carbonation may make them explode. 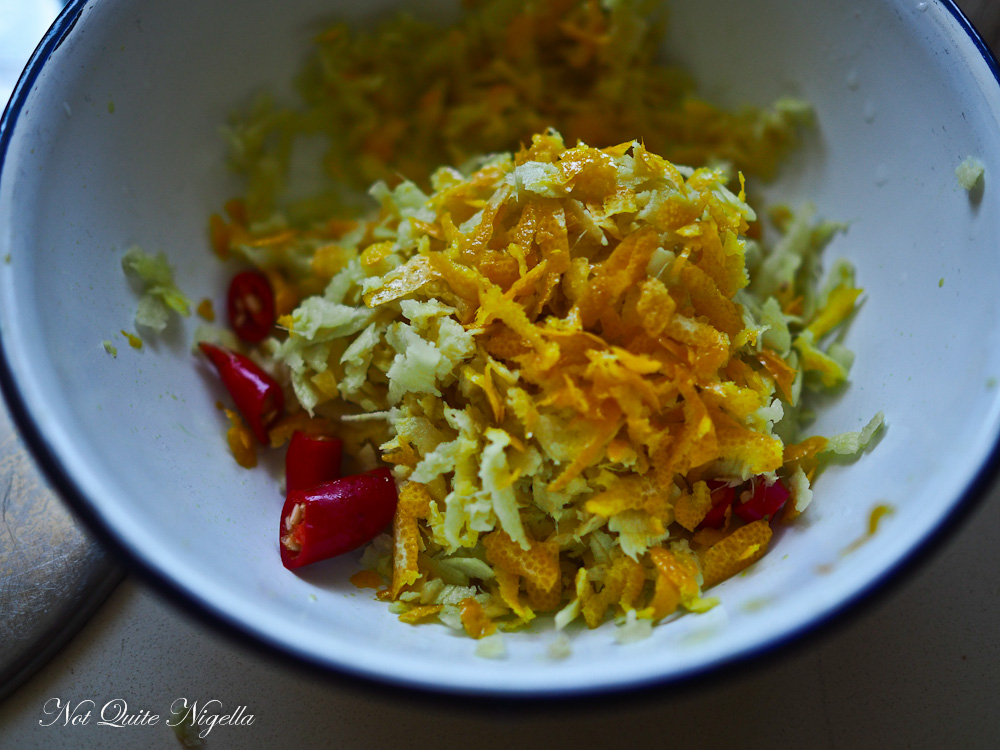 Step 1 - Grate the ginger into a large pot and add the water, sugar, lemon zest and chillies. Bring to a boil and simmer for 15 minutes without the lid on. 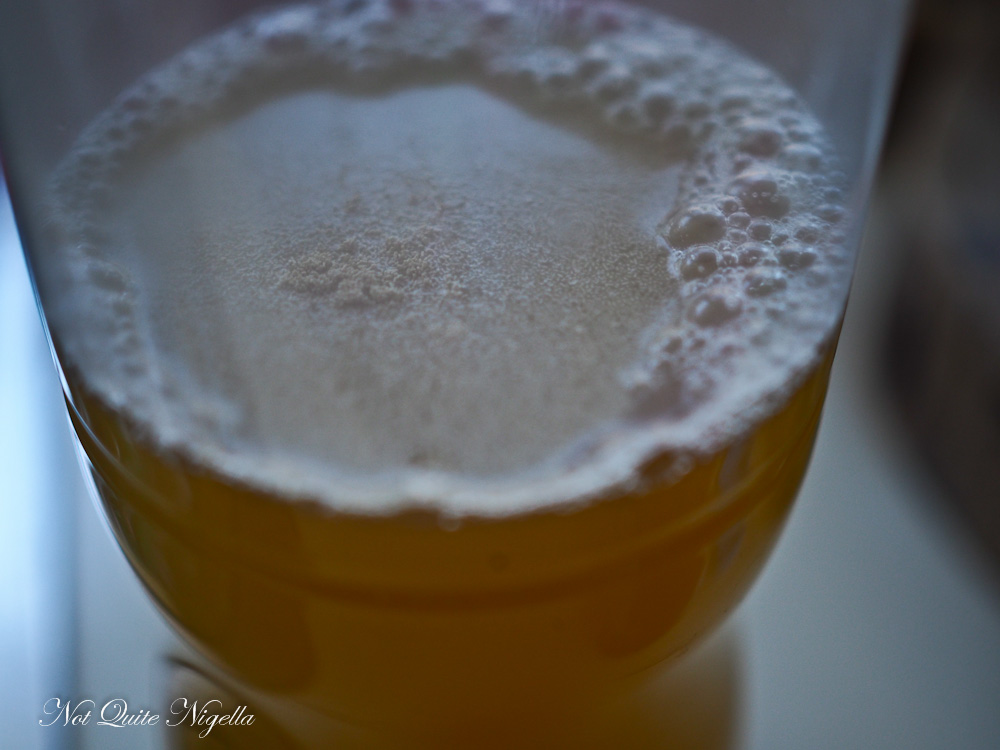 Step 2 - Cool the mixture down to 15-24C or 60-75F. Strain the mixture to get rid of the grated bits and then use a funnel to pour into two bottles and sprinkle 1/4 teaspoon of the champagne yeast into each of the bottles and shake gently to distribute. Squeeze the bottle and then screw the lid on and keep it at room temperature. As it is now summer here in Australia it only took a few hours for it to become really fizzy but in colder climates it can take up to 1-2 days. 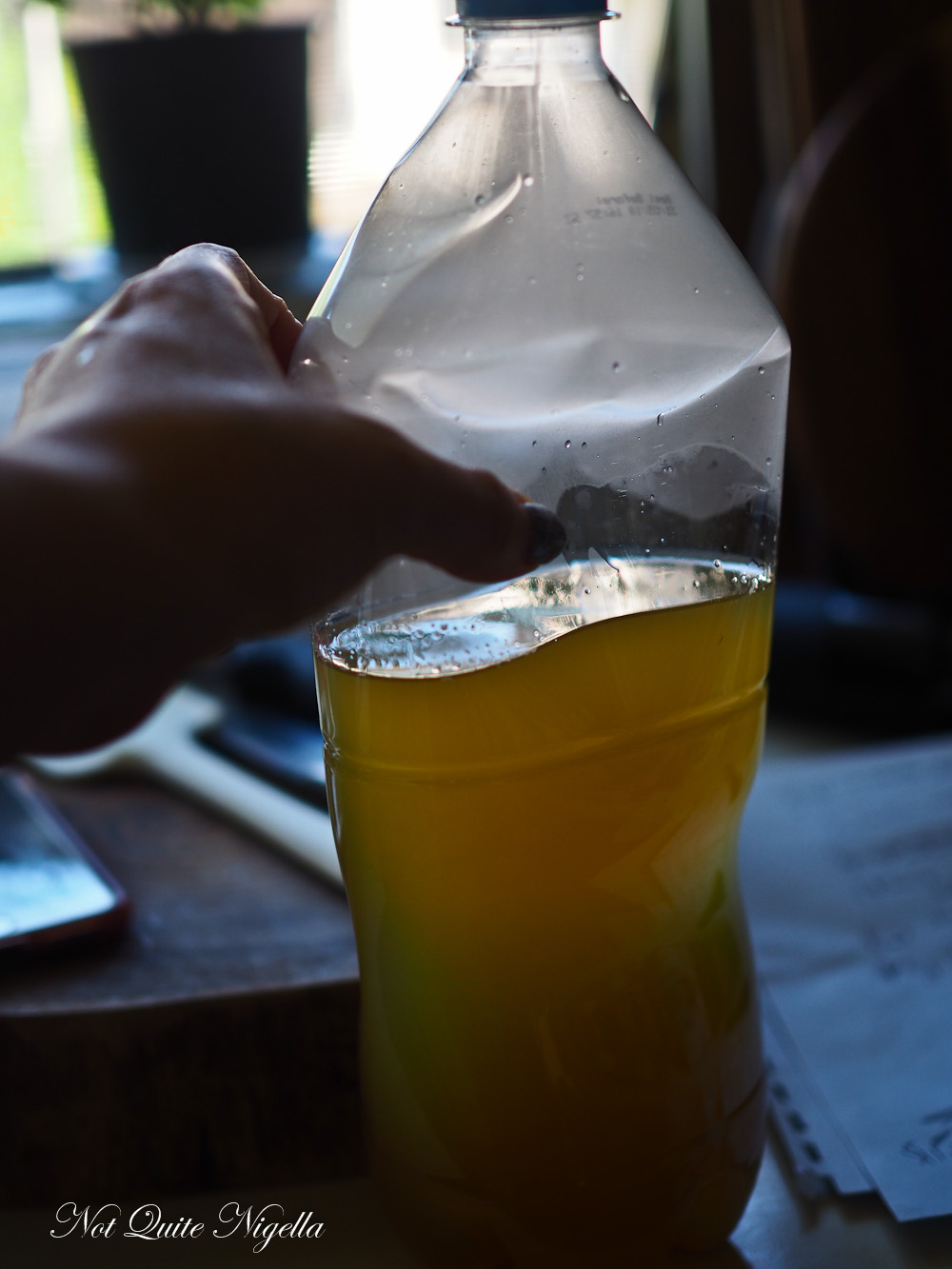 Step 3 - Over the next 24 hours the bottle will expand until it feels "hard to squeeze". Unscrew the cap and release the carbonation. You can drink it then (it is surprisingly quick) or keep it fermenting to make it more alcoholic up to 2 weeks. Make sure to release carbonation a few times a day and you can also loosen the lid so that some gasses can escape. Always open it over a sink (although we didn't have any issues because our bottles were too full). Once it is at the level of flavour and carbonation that you want, refrigerate it. It never lasts more than a couple of days as we love it so much. 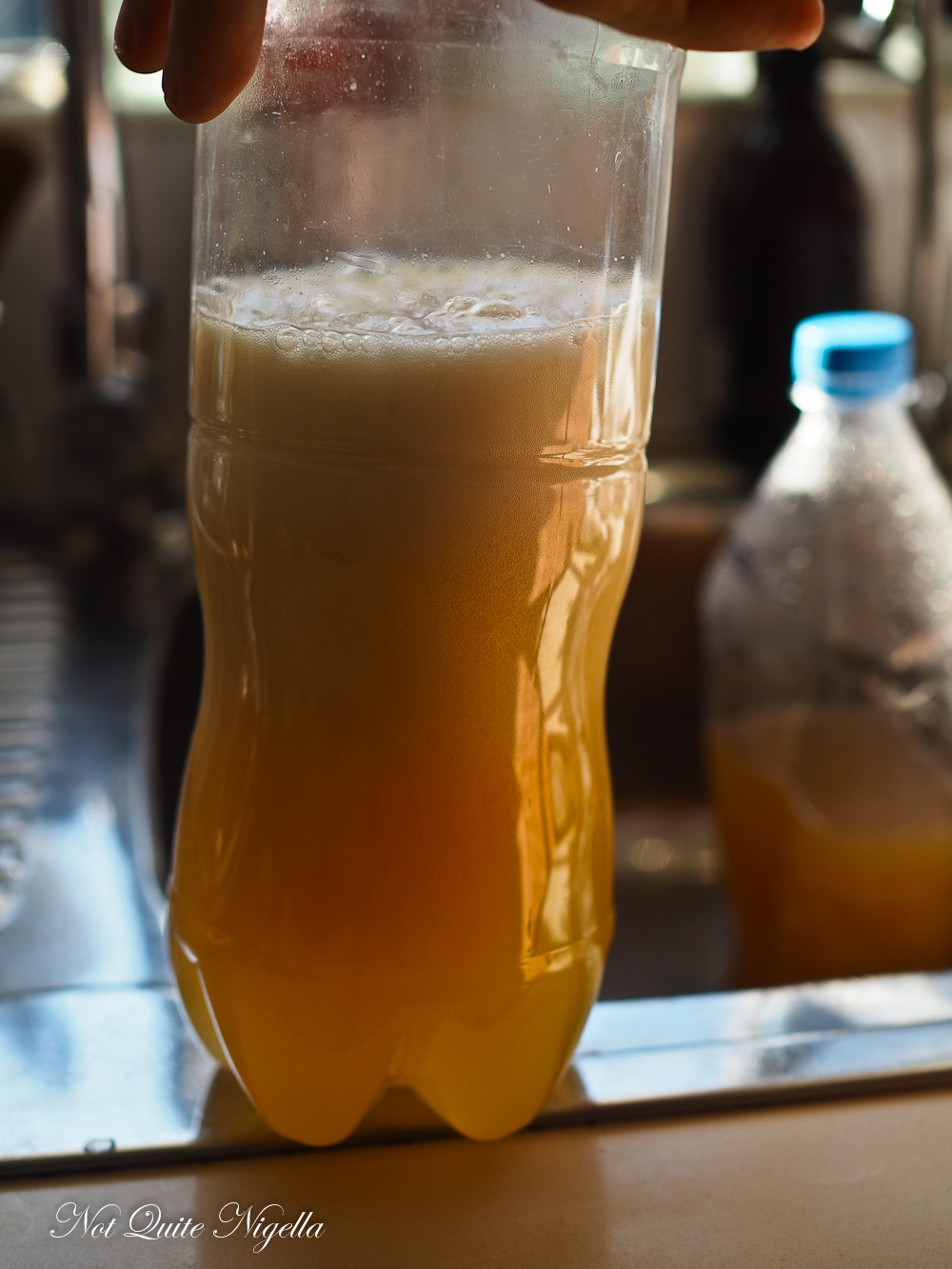