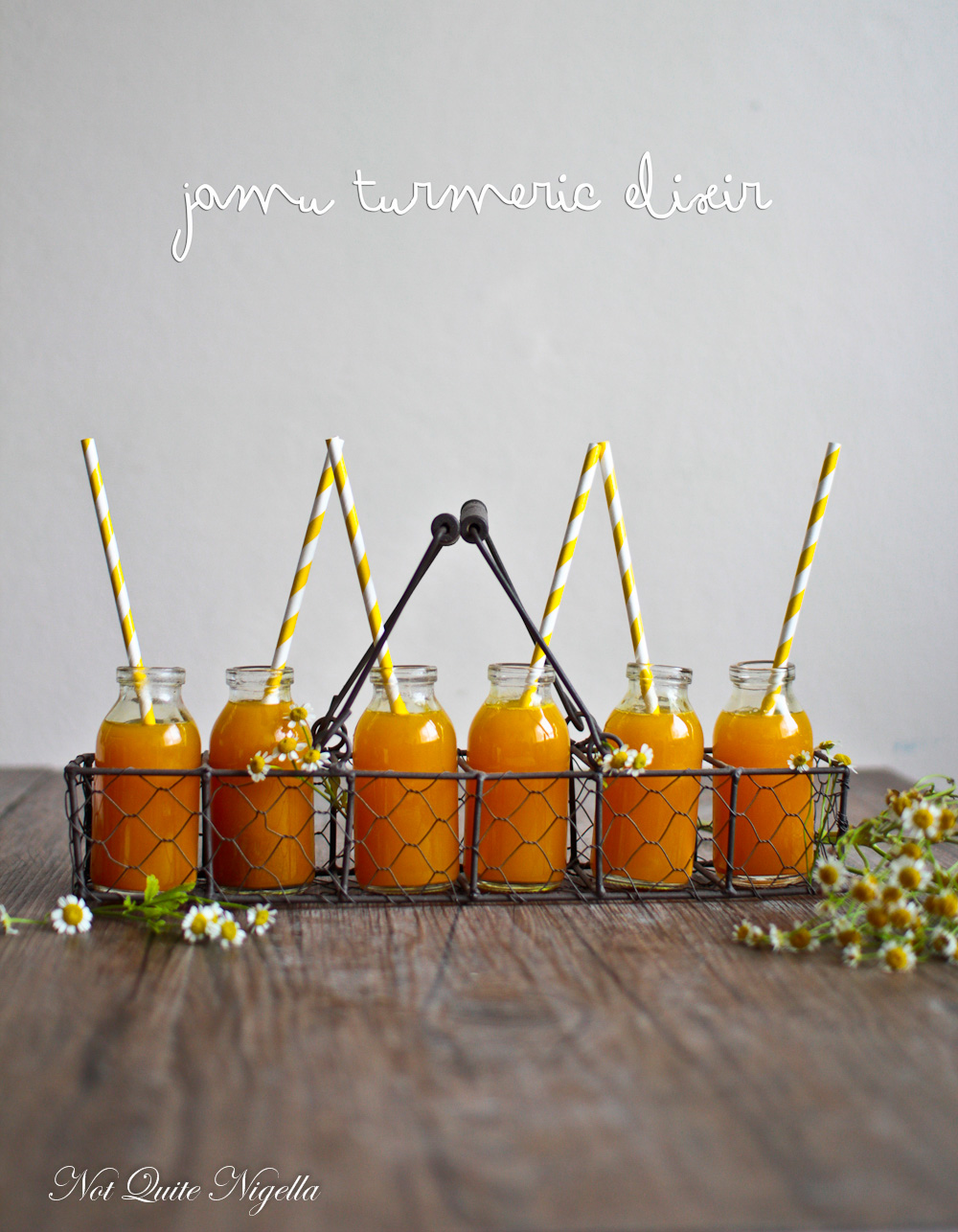 Have you ever heard of Jamu before? You may not have tried the drink but you will know all the ingredients from immune boosting turmeric, tamarind, ginger and honey. It is a traditional herbal medicine in Indonesia that people swear by and a multi million dollar industry. But you can easily make it yourself!

For the last month Mr NQN and I have been playing a game of tag. Not a fun game of tag but one in which I get sick and then go down for a while, then get better and by then he catches it and like a football we pass it back and forth between each other.

I saw a recipe for Jamu on Merryn's blog and I knew that it was the right elixir for us. It was simple-the two primary ingredients for Jamu are ginger and turmeric and it took a total of 15 minutes to make. I made it and gave some to Mr NQN without sweetening it. He ADORED it and kept asking me for it. I must admit that I wasn't a fan of the unsweetened one (it was a bit like a curry) and I like Merryn's recipe with honey added. 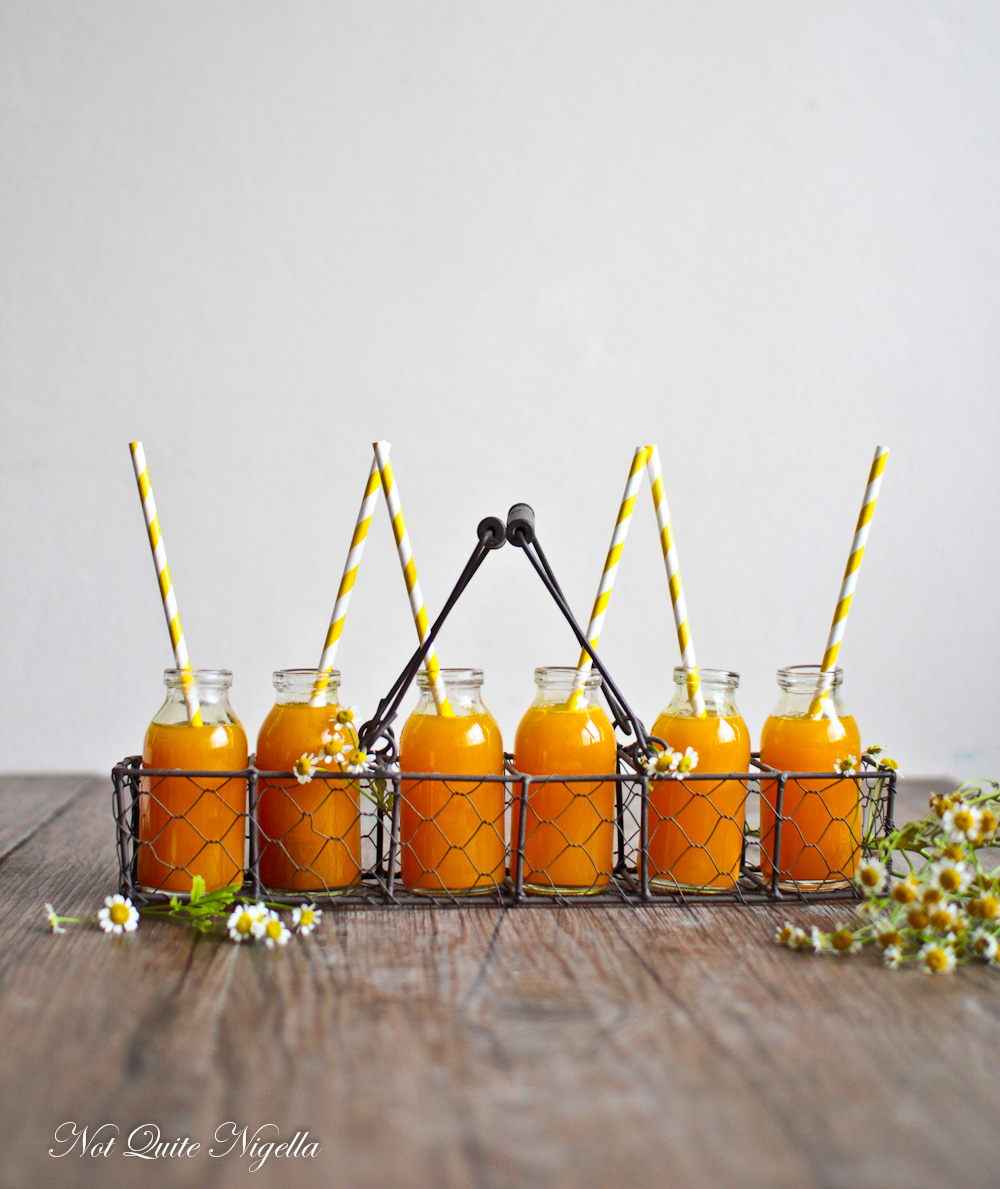 Jamu is serious stuff in Indonesia and producers range from street sellers who sell bottles of it in baskets carried on their back to large factories. It is said to be good for immunity, digestion and for the liver with some people drinking it every single day with breakfast. This version is a simple jamu - there can be lots of ingredients added that range from easy to procure to challenging (dried seahorse, bee larvae, galangal, cinnamon, jasmine, goat's bile to name a few!) and I think Merryn's recipe is a very palatable one. Fresh turmeric can be hard to get for some so you can use dried too. I tried a batch with turmeric powder and one with fresh turmeric. Admittedly I did prefer the taste of the fresh turmeric jamu as the powder leaves a layer of residue at the bottom but fresh turmeric is messy to deal with because of the colour staining. And if you do use powdered turmeric make sure that it is fresh (I only say this because my turmeric was past it best date so I got a new batch and it was so much more potent).

Before I tried this I tried everything to get better and I spent the whole weekend in bed leaving once and then the next few days were spent in a zombie-like stupor.

The phone rang on Monday. It was my mother. "Do you want me to make you something to eat?" she asked. That's what my family do when people are sick. We cook for them. Any sort of trauma/drama or injury no matter how big or small can be fixed (at least temporarily) by food. And within an hour she had sent my father over with a bowl of delicious noodle soup for me. It was like being given a pot of gold and I'm sure that light was beaming out of it because it warmed me up completely. I don't know if I can attribute getting better to the jamu, the soup or the antibiotics (realistically the latter Probably) but in combination I was starting to feel fit again.

And in return once I felt a bit better so I gave my mother a batch of this jamu. Because that's what I also try to do-when someone does me a favour I do one back. I also hate to be the one in debt to someone. How about you?

So tell me Dear Reader, have you been sick lately with the change of seasons? And are you someone that hates being in debt to someone else favour-wise? What do you think of elixirs like these?

Tip: turmeric is very good for you but it stains chopping boards, skin and porous surfaces like plastic. I stored the elixir in glass to prevent staining. I also drink this with straws to prevent it colouring my teeth but I am neurotic about my teeth. 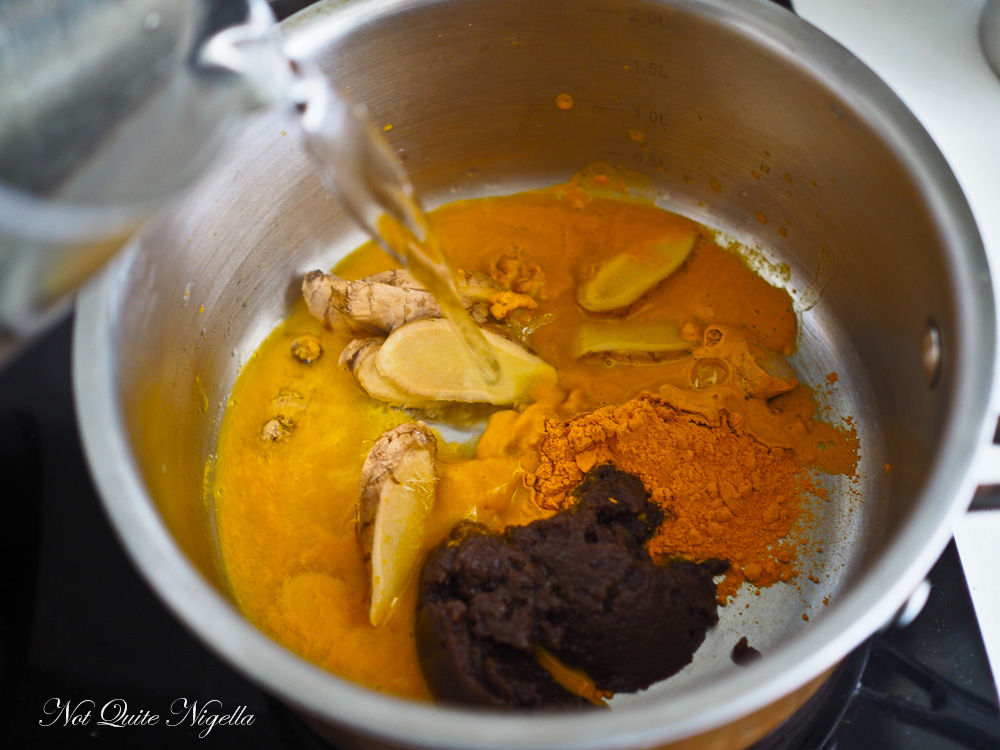 Step 1 - Place the water, tamarind paste, turmeric and fresh ginger onto boil and once it starts boiling simmer uncovered for 15 minutes. Turn off heat and when it cools down stir in the honey (the amount depending on taste). Strain if you're using fresh turmeric,

I like this best when it is warm if I am feeling sick but it is also delicious cold on a hot day.