Supper Time At The One Table Supper Club 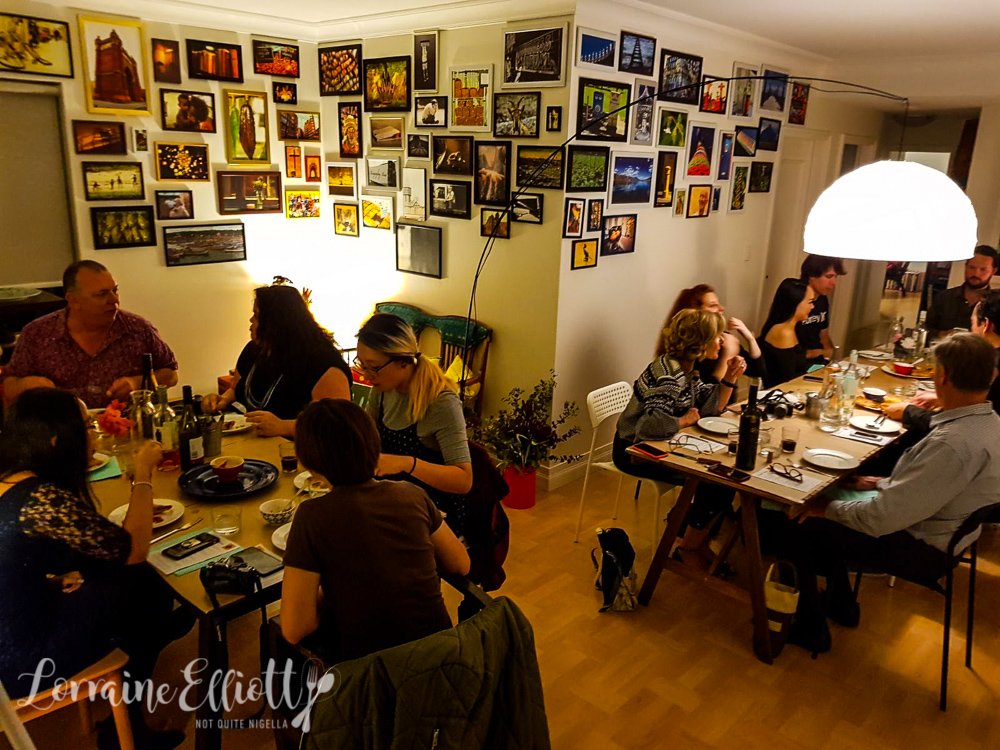 While supper clubs are a popular concept overseas, they're yet to really take off to a significant degree here in Australia. So what is a supper club and what happens at one? Take a peek inside the themed OneTable supper club dinner in the Sydney suburb of Wollstonecraft!

OneTable Supper Club's Anu Haran describes the difference between a supper club and a restaurant, "For me, the joy of a supper club is the kind of relaxed ambience it provides for people to meet new people & the friendships they often lead to. Food is only the catalyst! The menu is designed to be sharing...so that guests pass around food and talk to each other. In a big city like Sydney, I want OneTable to be a catalyst to such friendships." 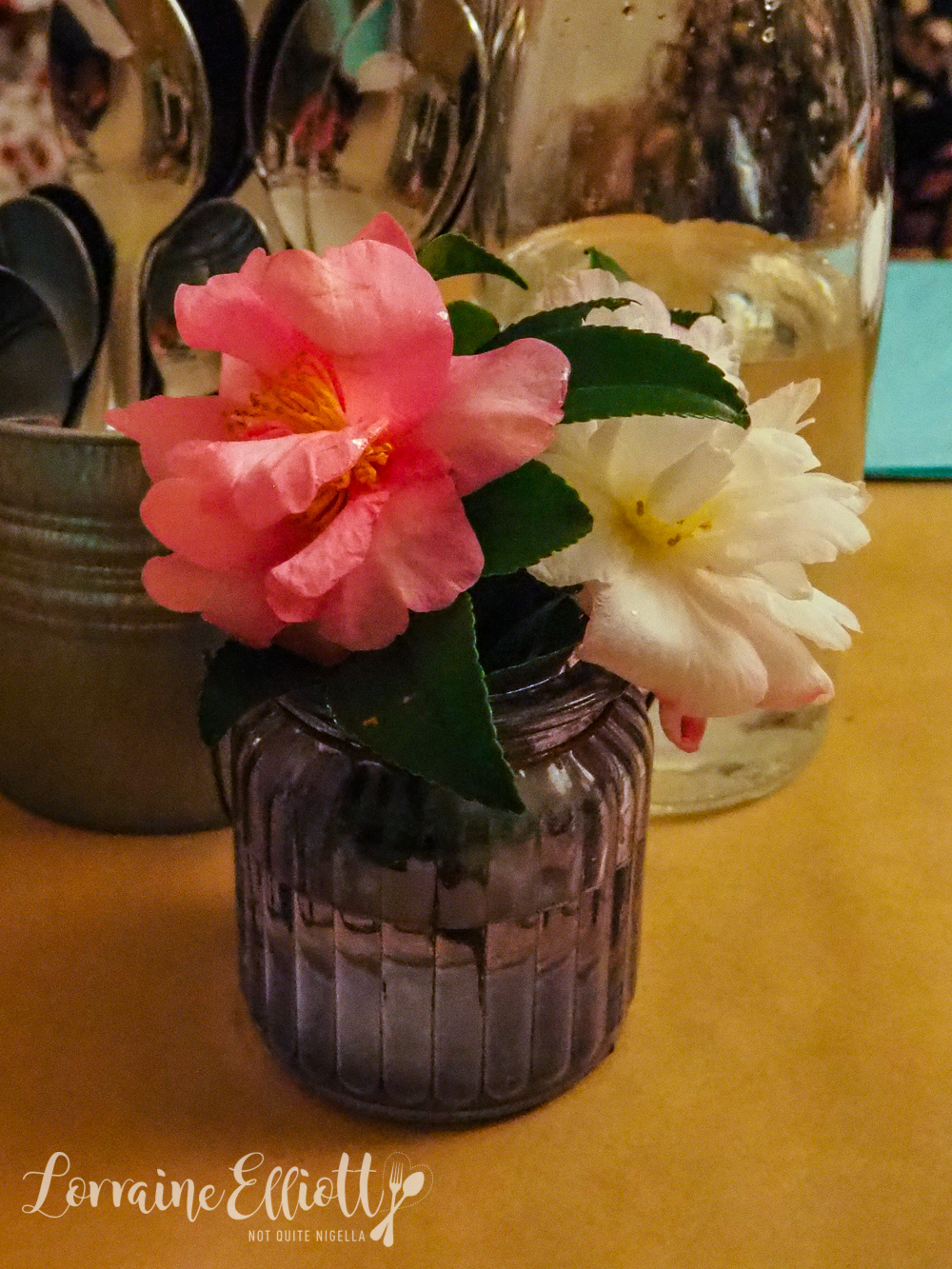 Anu is a veteran of supper clubs, having hosted over 80 of them in London. She lived in London for two years where she teamed up with friend Laura Gonzalez to launch a supper club featuring South American and Indian cuisine reflecting the two founder's backgrounds. 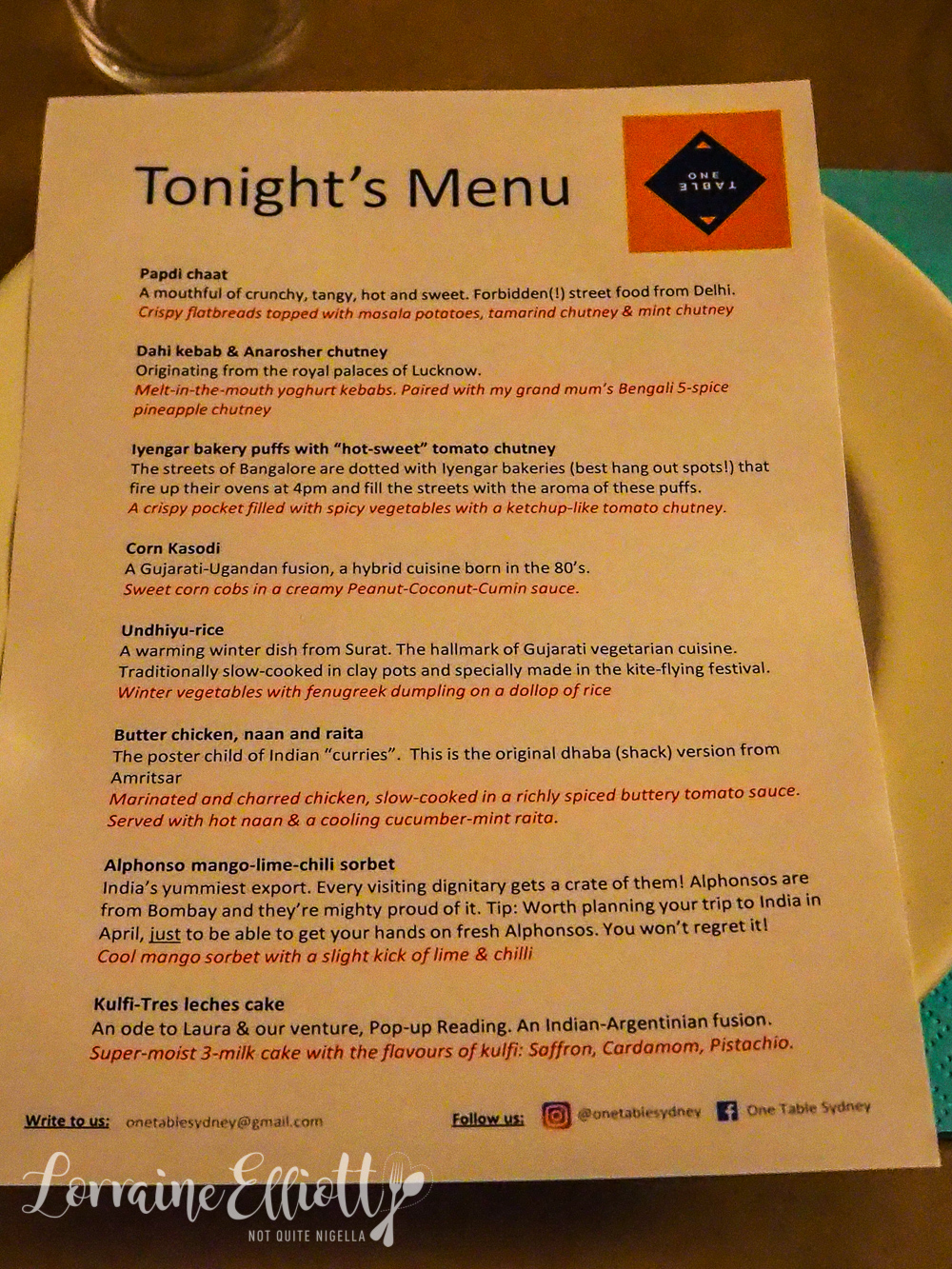 Supper Clubs are a relatively underexplored concept here in Australia but in some overseas cities, they flourish. Before long, Anu and Laura were selling out their dinners within six hours. "To be fair I don't know if there was very much to do in Reading," she says laughing. The concept is simple: host a dinner in your house or apartment and charge people in the same way that a restaurant would.

One large difference is usually in the interaction between guests and business and personal relationships can result. "A yoga teacher was looking to start doing some basic teas and coffees at her studio. She happened to be dining next to someone who runs a coffee kiosk in Reading. A couple of months later, I passed by the studio and dropped in to say hi and saw that there was a bustling tea & coffee kiosk at the entrance. I discovered that they’d met at our dinner, kept in touch and eventually it flourished into a business partnership," says Anu. Other repeat guests would see each other at her supper club dinners and eventually dined together outside of the supper club. 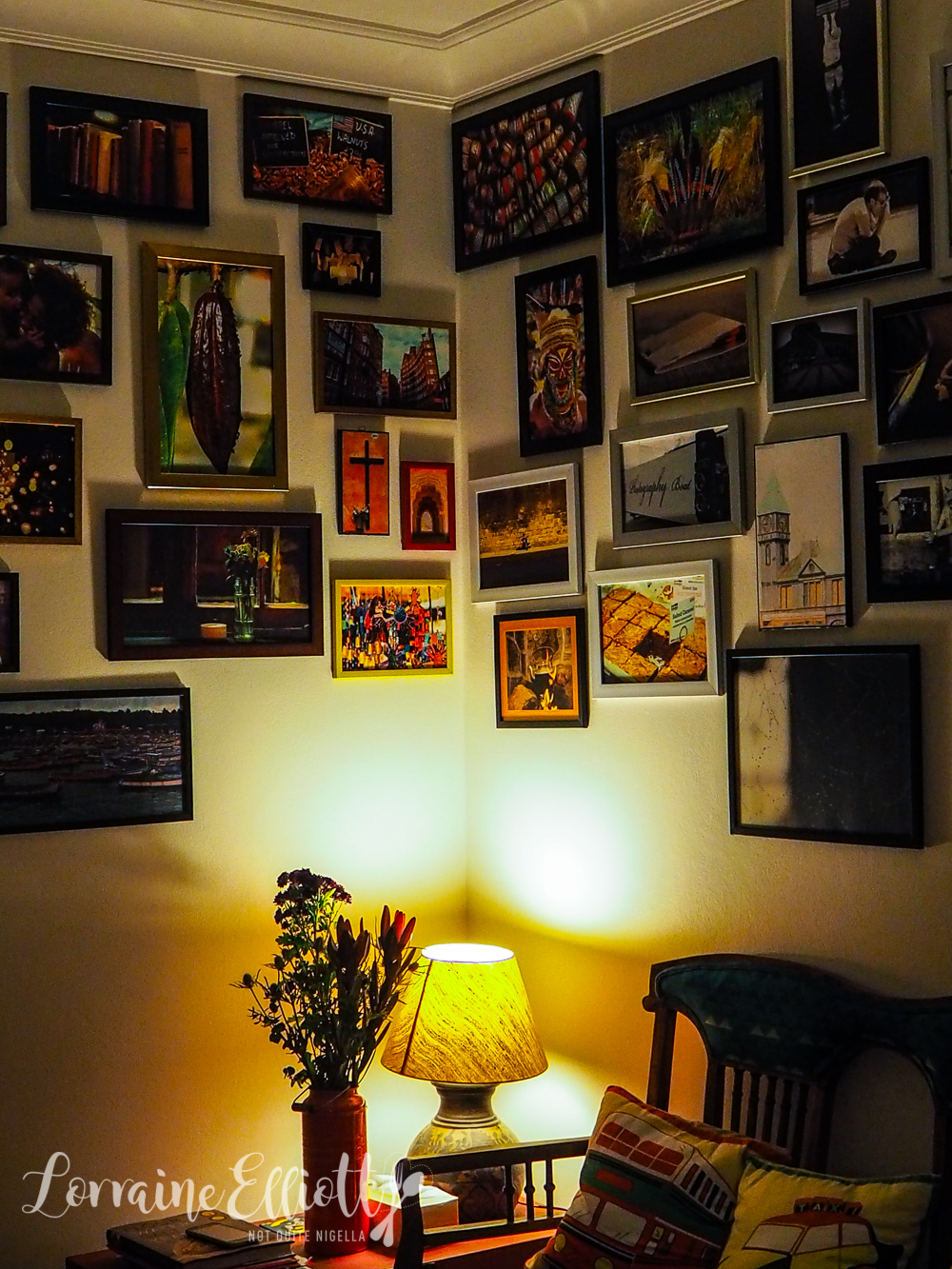 In January 2017 Anu was transferred to Sydney but her love of supper clubs hadn't waned and she started One Table Supper Club. For her first supper club here in Sydney, she focused on Hindustani food. Most of the Indian food we have here is focused on Northern and Southern Indian cuisine but the continent is vast. "I haven't found really good Indian food here," she laments.

The dinner is held in an apartment in Wollstonecraft that she shares with husband Parag. The apartment is comfortable and welcoming with his framed photos lining the walls. There are 15 people dining here tonight split across two tables. All alcohol is BYO (there is no corkage charge) and she runs it along with Parag. To dine here it is $55 per person. There's a menu at each place setting and it's full of dishes that are new to most of us with the exception of butter chicken. 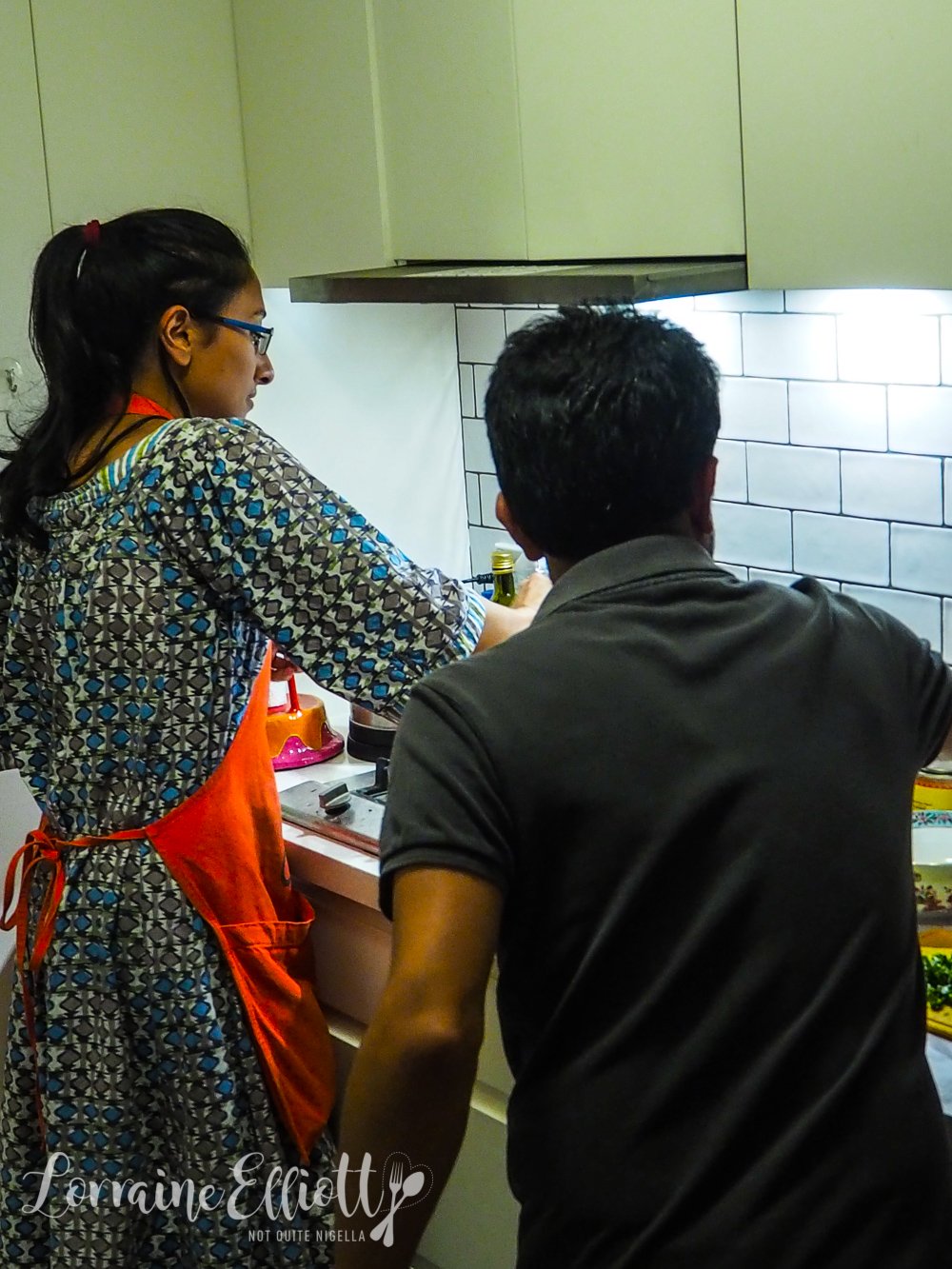 Anu and Parag in the kitchen

Her idea is to take people for a journey around India. She explains that in the north like in Delhi, Kashmir and Punjab the food is typically heavier due to cold winters and its proximity to the Himalayas. Curries tend to heavy in butter and cream eg butter chicken.

The south of India, in areas like Kerala, Chennai and Bangalore is very coastal with coconut based curries and they use coconut oil in their cooking. She also adds that the curries from here "can be seriously spicy." 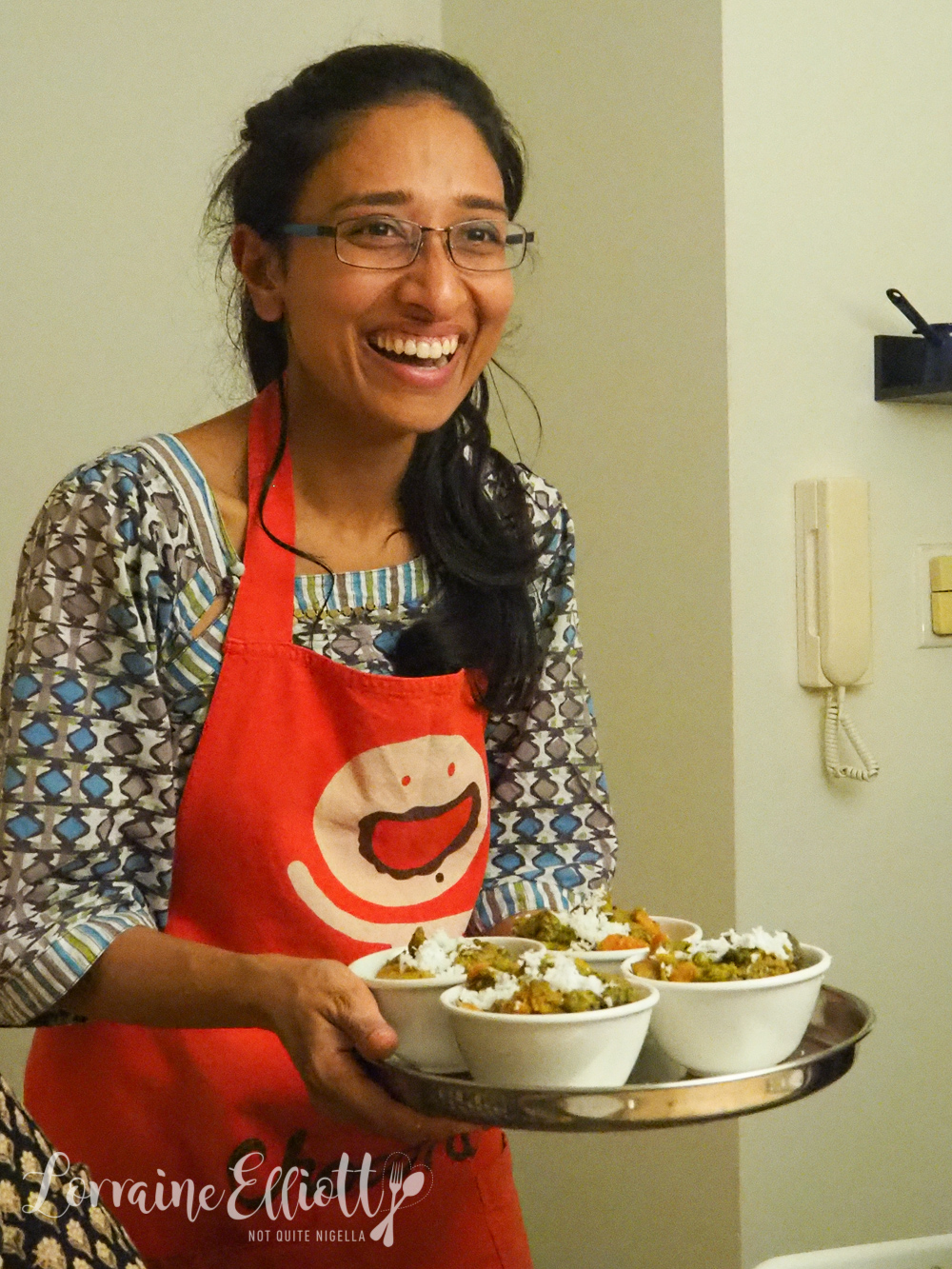 The east eg Calcutta focuses on more mustard or poppy seed based curries. They grind mustard or poppy seed to form a thick yellow paste and it is used to thicken and flavour fish and vegetable curries. Mustard oil is also used in cooking in the east. Lastly the west of India like Bombay and Gujarat has a lot of peanut-based curries with peanuts used in the same way that mustard and poppy seeds are in the east. "People from other parts don't get married because they can't make it work because the food is so different," she says quite seriously. 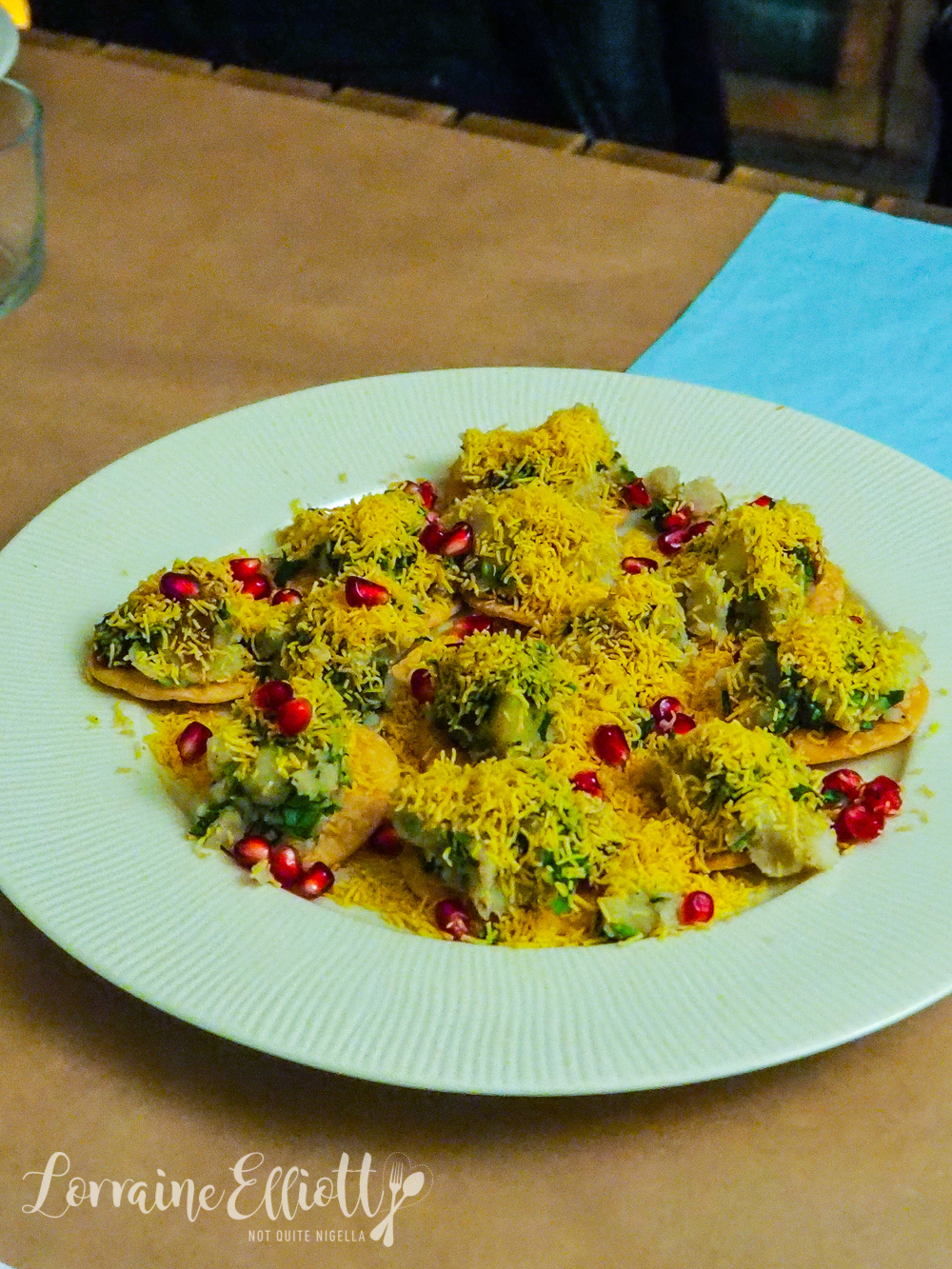 We start with a colourful plate of papdi chaat. Anu calls this the "forbidden street food" because people can be fearful of eating street food in India in case they become ill. It's small oval crispy dough wafers topped with soft masala potatoes, tamarind chutney and mint chutney and "sev" or tiny chickpea flour noodles as thin as vermicelli. They're deliciously crunchy although given we have eight courses, I have to stop myself from eating more. 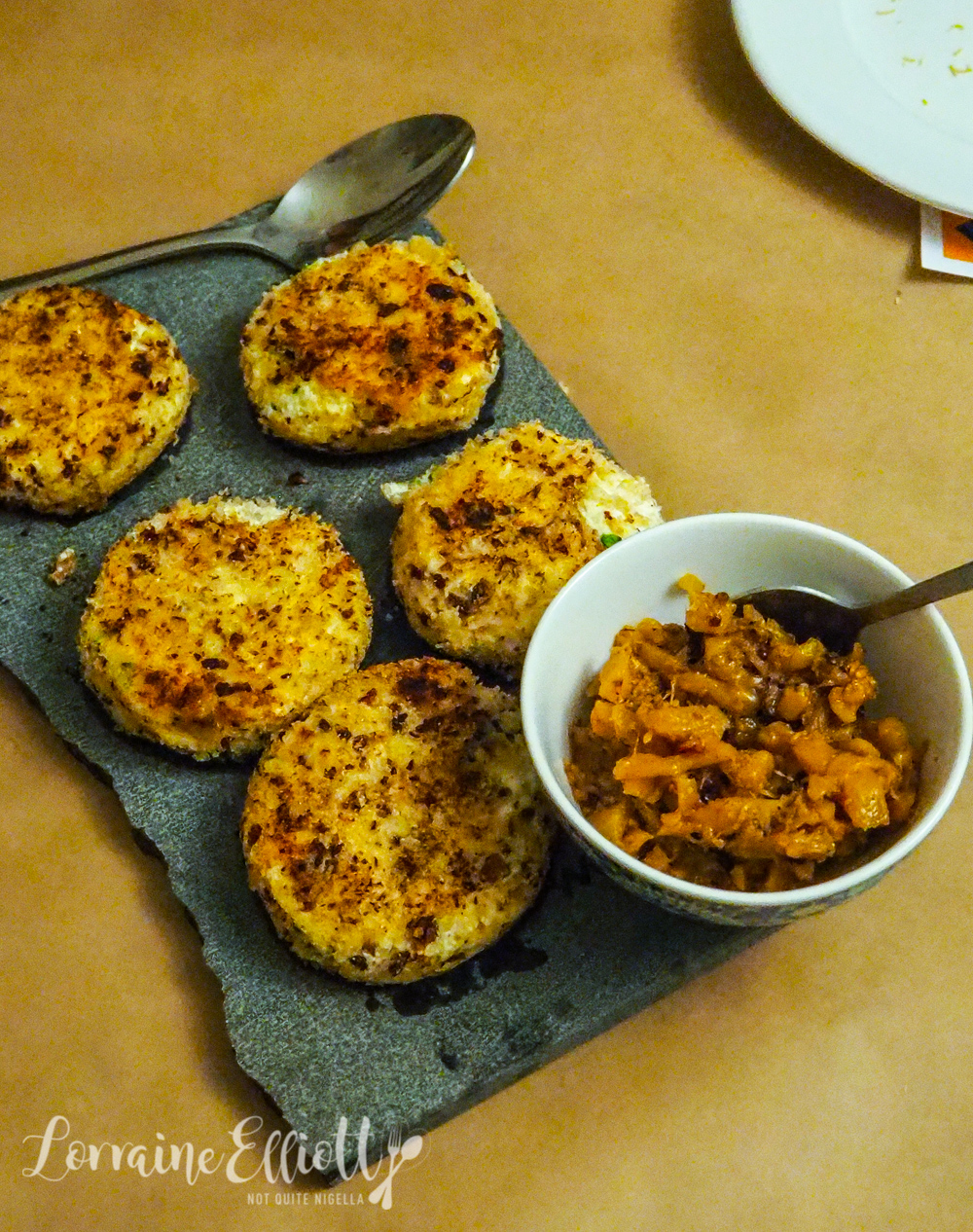 This recipe originates from the royal palaces of Lucknow, a city in Northern India. Usually kebabs are made out of meat but these unique kebabs are made of yogurt, onion, garlic and spices. They're delicate in texture but delicious and a real surprise favourite of the meal and I asked her for the recipe as I liked them so much (who knew you could make a kebab out of hung yogurt?). These are paired with Anu's grandmother's Bengali 5 spice pineapple chutney which is sweet and spicy. 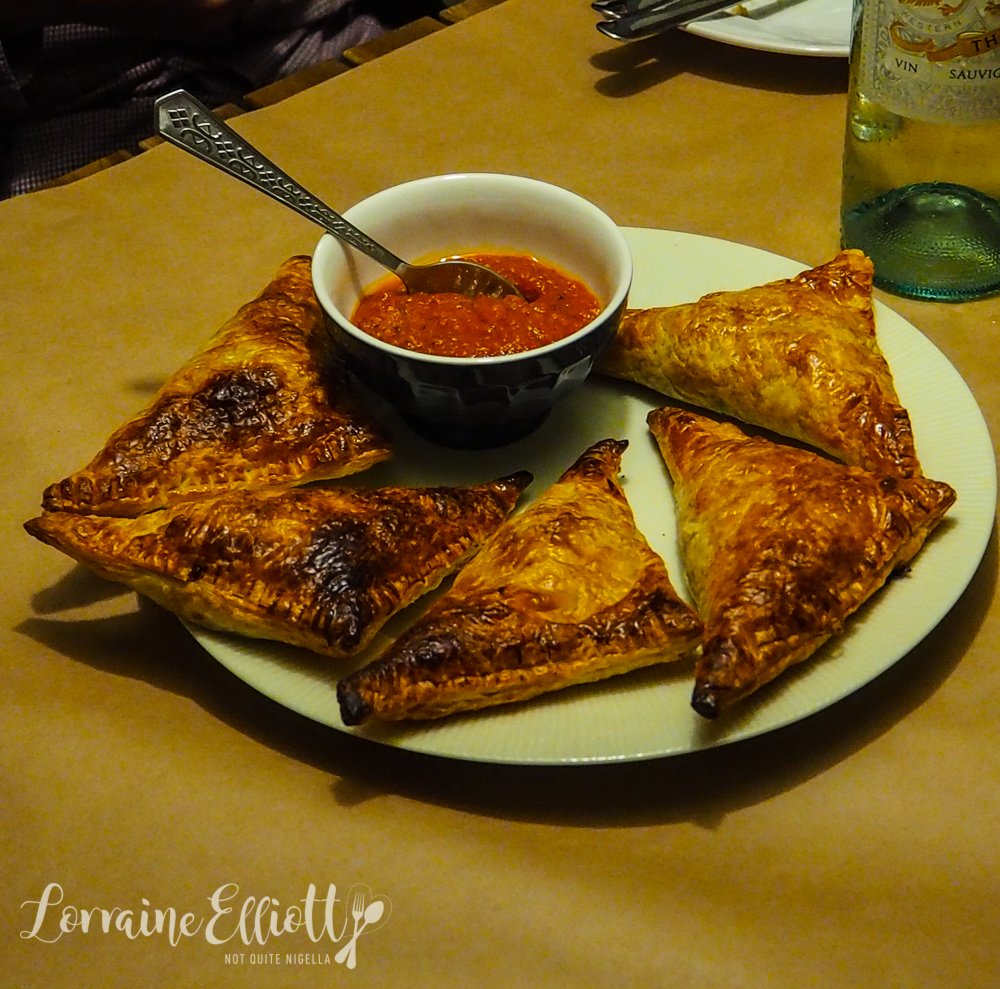 The next item is a pastry originally from Iyengar bakeries. Anu explains the history of Iyengar bakeries that according to, "Folklore is that in the early 1900s, there was a sweet shop in Bangalore run by 2 brothers. An Englishman who used to work in one of the hotels nearby, was a regular at the sweet shop. He taught one of the brothers how to bake western-style bread and biscuits (which at the time was quite new in India). It used to be called Bangalore Brothers bakeries. Their speciality used to be buns, potato buns, cookie-like biscuits (butter cookies), plum cakes and puffs. Now there’s a whole heap of them and they’re popularly known as Iyengar bakeries. Iyengar is the caste of people who used to run these shops. They migrated from one of the neighbouring villages. Anyone who’s lived in Bangalore will have a lot of nostalgia attached to these bakeries. They’re great hangout spots for college kids, etc especially in the afternoons as puffs come out fresh from the oven." These are filled with spiced vegetables and a sweet tomato chutney and are served warm. 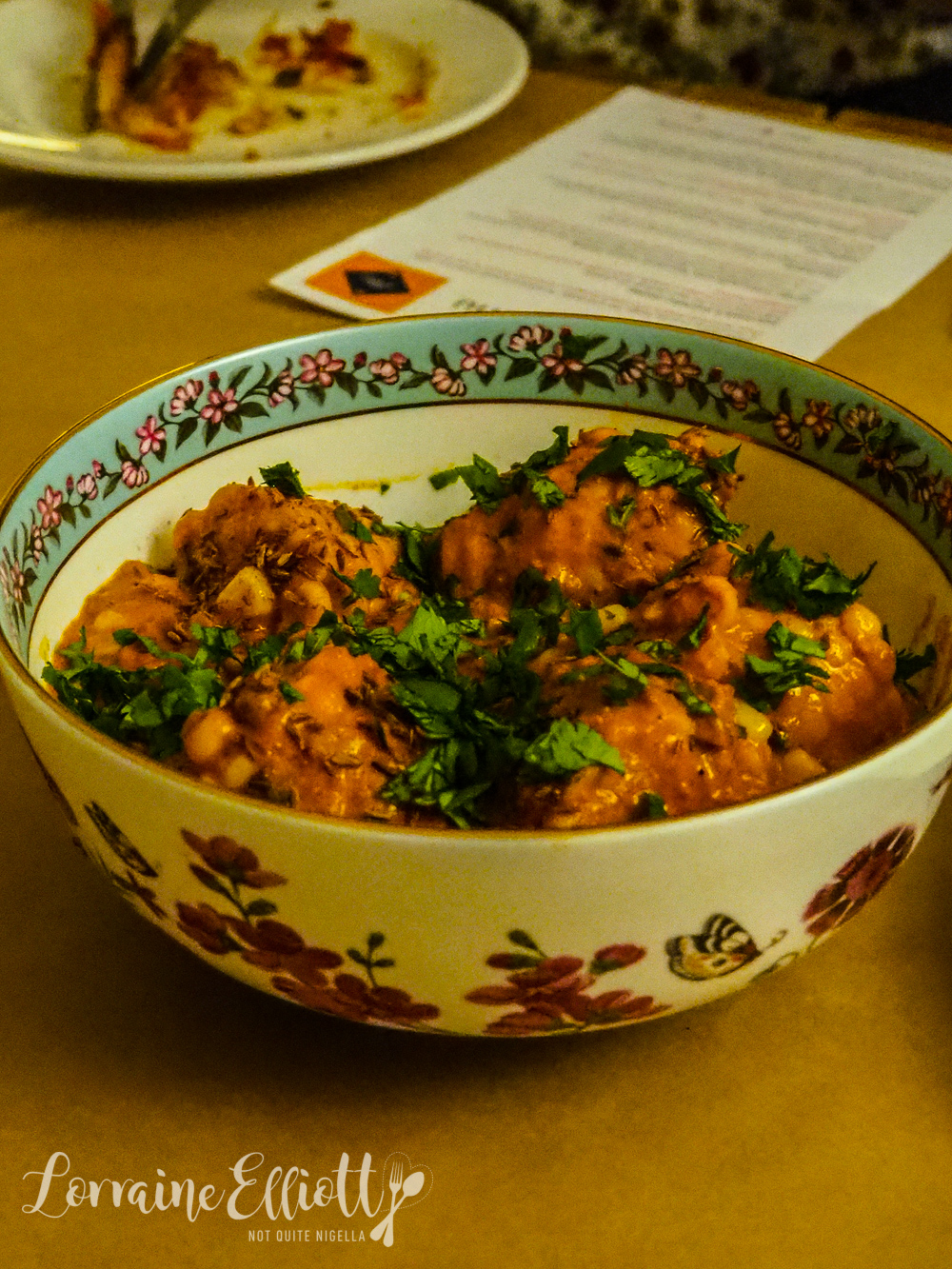 The corn kasodi are coated in a rich peanut, coconut and cumin based gravy and are very tasty albeit difficult to eat as they are small cobettes. The idea is to use your fingers. It is a fusion dish combining Gujarati and Ugandan food. "There's a decent sized community of Indians in Uganda. Mostly people from the West of India i.e. Gujarat. Initially, many north Indians were brought to Uganda to help build the railway. This was in the 1920s or so. However around the 1950s, they were followed by Gujaratis who have a keen ability to sense commercial opportunities! In the 1980s, there was almost a 100,000 population of Indians in Uganda contributing significantly to the economy. As it happens in many places, it spawned an interesting hybrid cuisine: Gujarat-Ugandan using Indian spices but Ugandan ingredients (cassava, raw mango, corn etc). Its so elusive that not many Indians are aware of it," explains Anu. 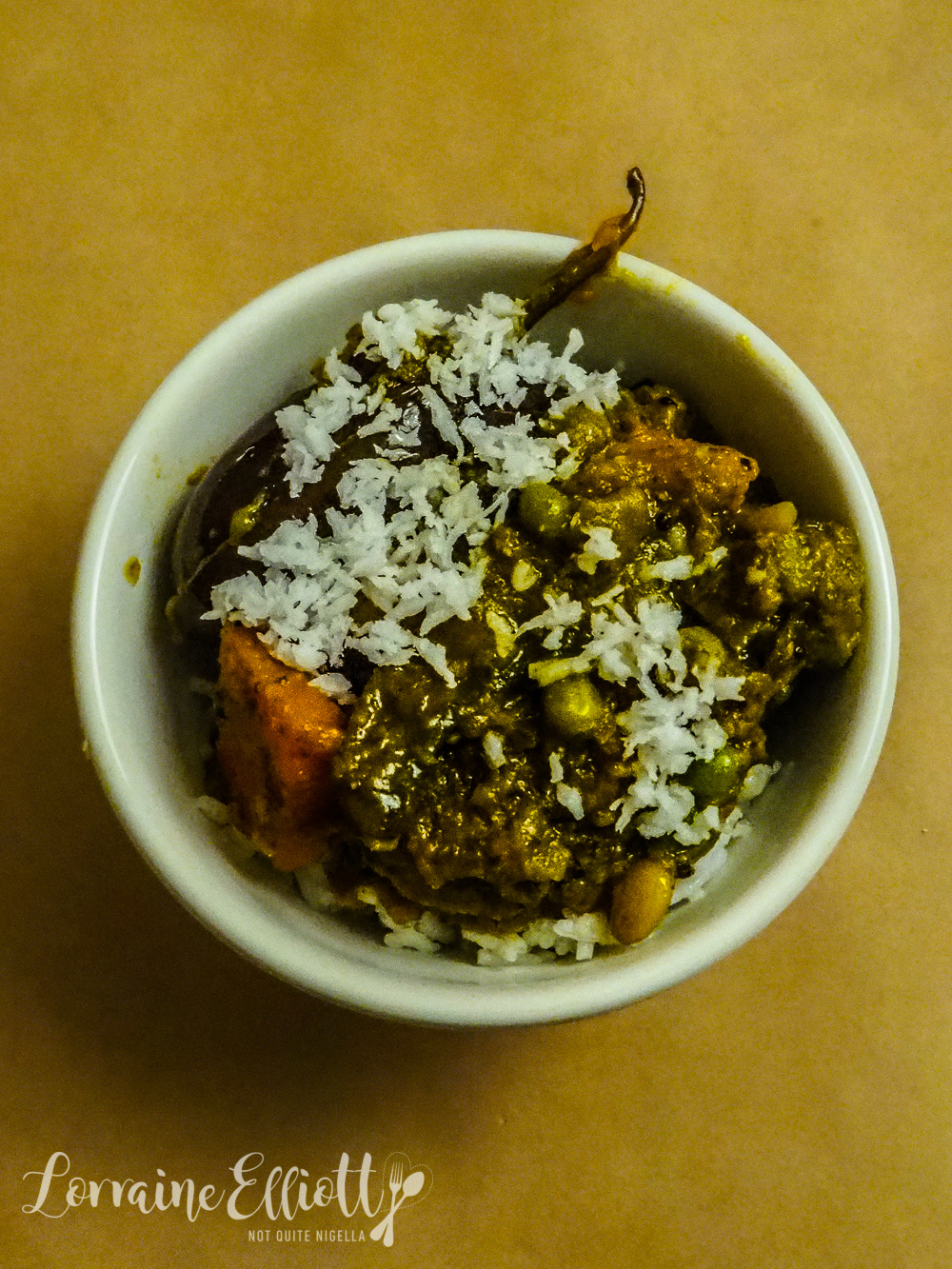 The second last savoury dish is the Undhiyu rice from Surat in the West of India in Gujarati. Anu describes this dish as the hallmark of Gujarati vegetarian cuisine where it is traditionally cooked in clay pots for a kite flying festival. This dish is pure comfort in the same way that rice stuffed vegetables are. In the bowl are carrots, eggplant, potatoes and rice as well as two fenugreek dumplings hidden amongst the vegetables.

What is a nice surprise is that there is no lagging or big gaps between courses. I'm sure Anu and Parag are furiously working away in the kitchen to get the courses out in a timely manner but they're cool, calm and collected as they serve the courses and we are never left twiddling our thumbs. 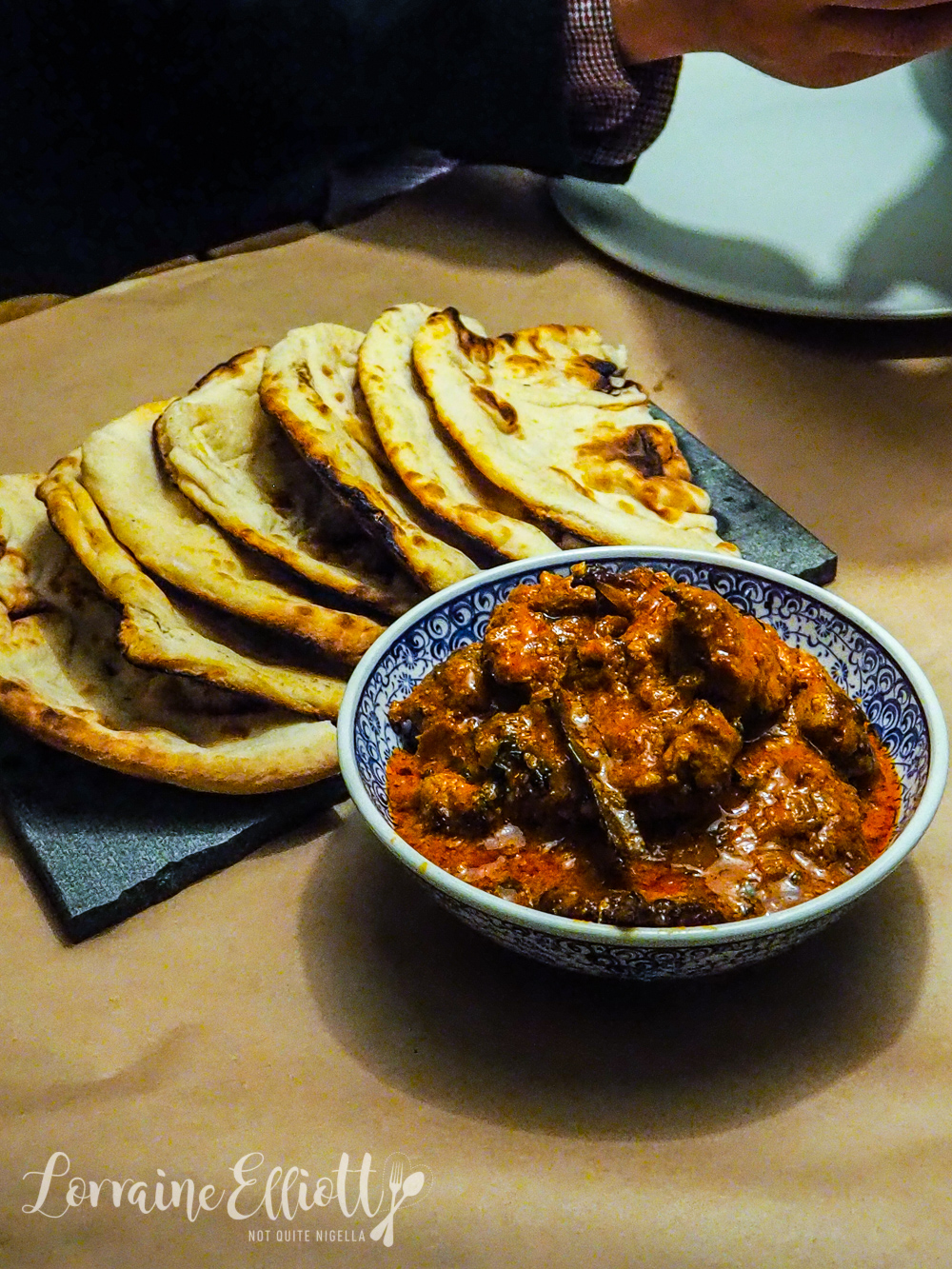 Many of the items in the dinner are not what you might find at Indian restaurants here but of course butter chicken is the exception. Anu chose it because "If you don't like anything you'll like butter chicken." And it's a beauty. I love the generous use of spices, especially cardamom, and it's creamy but not heavy. The flavour of the spices penetrates through all the chicken and there's a good amount of sauce to go with the sourdough naan that she has made. The cucumber mint raita comes later but it's not needed as the butter chicken is saucy but not hot. Whenever people ask about the recipes, Parag makes sure to detail their cooking tips. 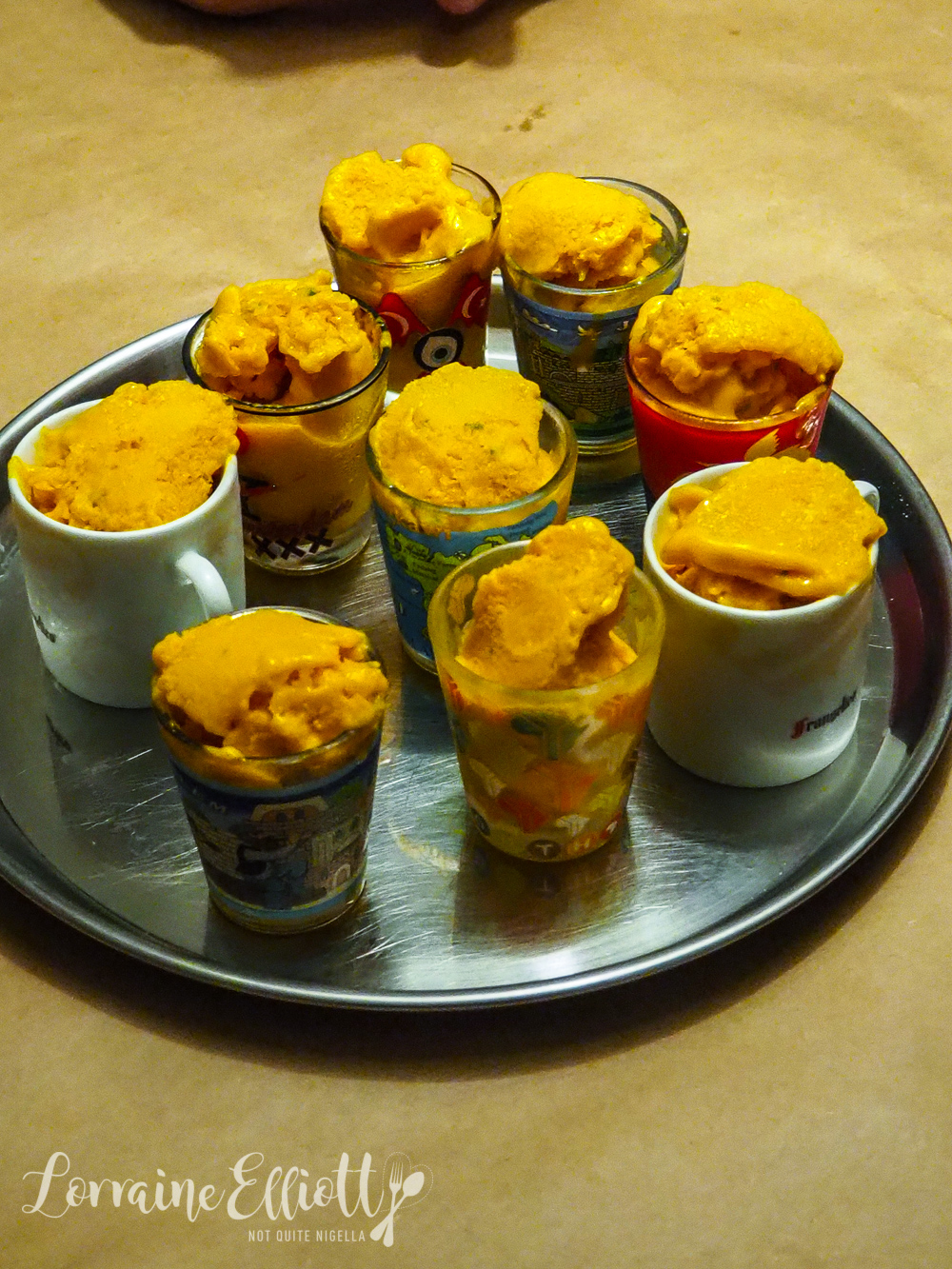 It's palate cleanser time and the sorbet is served in Parag's collection of shot glasses. It is a spicy Alphonso mango, lime and chilli sorbet. Originating from Bombay, Alphonso mangoes have a distinct flavour to them and are given as gifts. Anu suggests people plan trips to India in April to try fresh alphonso mangoes. 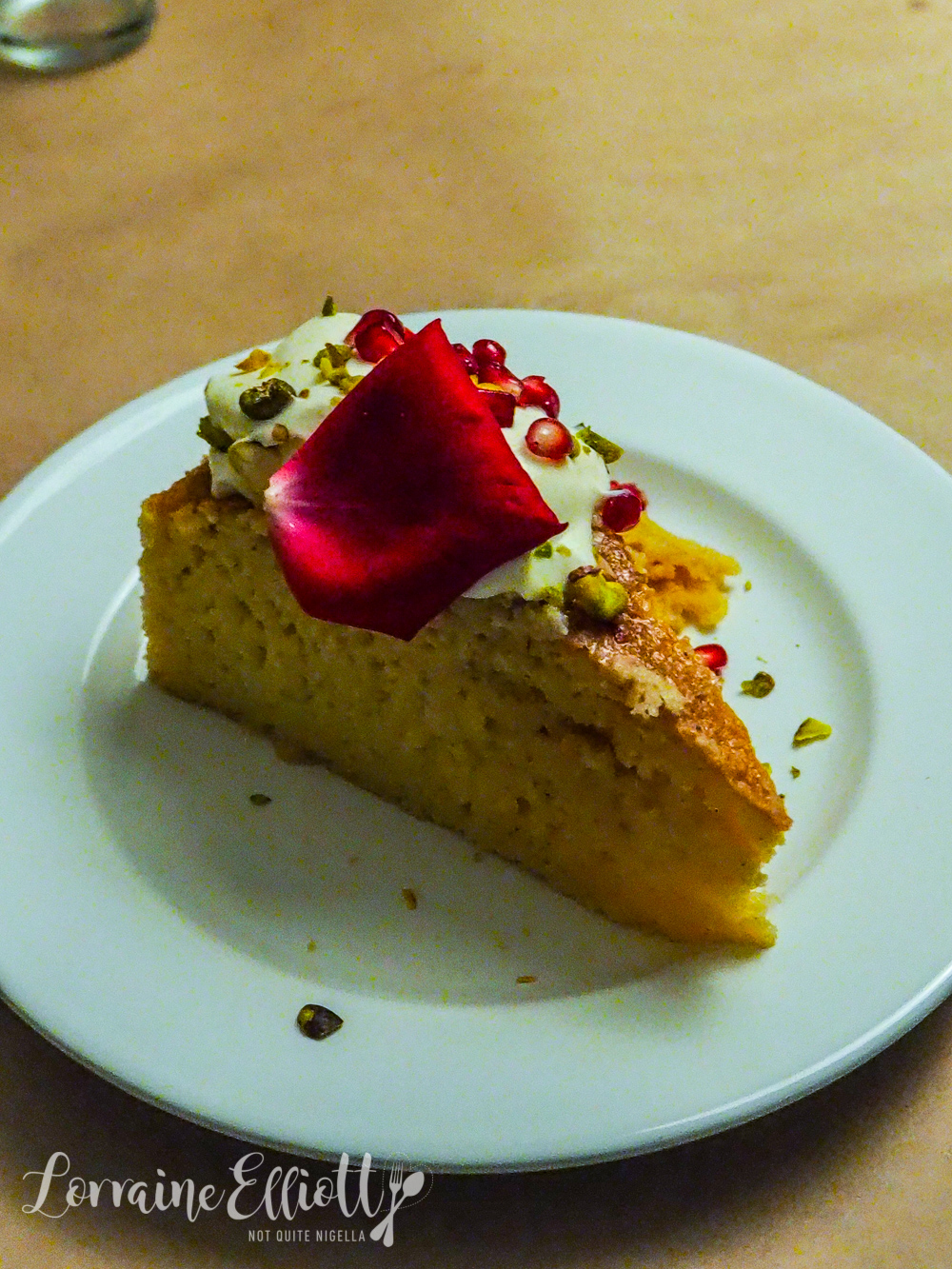 The final dish is a dessert, dubbed an ode to Laura and their Reading pop up and it is an Indian Argentinian fusion with a three milk cake with kulfi flavours of saffron, cardamom and pistachio. It's a generous slice beautifully presented with yogurt cream sauce, pomegranate seeds, pistachios and rose petals. Anu is a keen cake baker and it was cakes that started her food business, "It all started in 2012 when he (Parag) convinced me to start supplying cakes from our home in Bombay. There was no good bakery in the neighbourhood so I decided to step in and supply good quality cakes for occasions. That got a bit out of control as I started with like 1 cake per week & later it grew to 1-2 cakes/day. So I was doing a full time job plus baking and delivering in the evening."

So tell me Dear Reader, do you like the idea of a supper club? Have you ever been to one? And have you tried many of the dishes detailed here? Where or how do you meet new people?

NQN and Mr NQN dined as guests of OneTable but all opinions remain her own.

instagram.com/onetablesydney/
Bookings open for 11th and 25th May, 2018