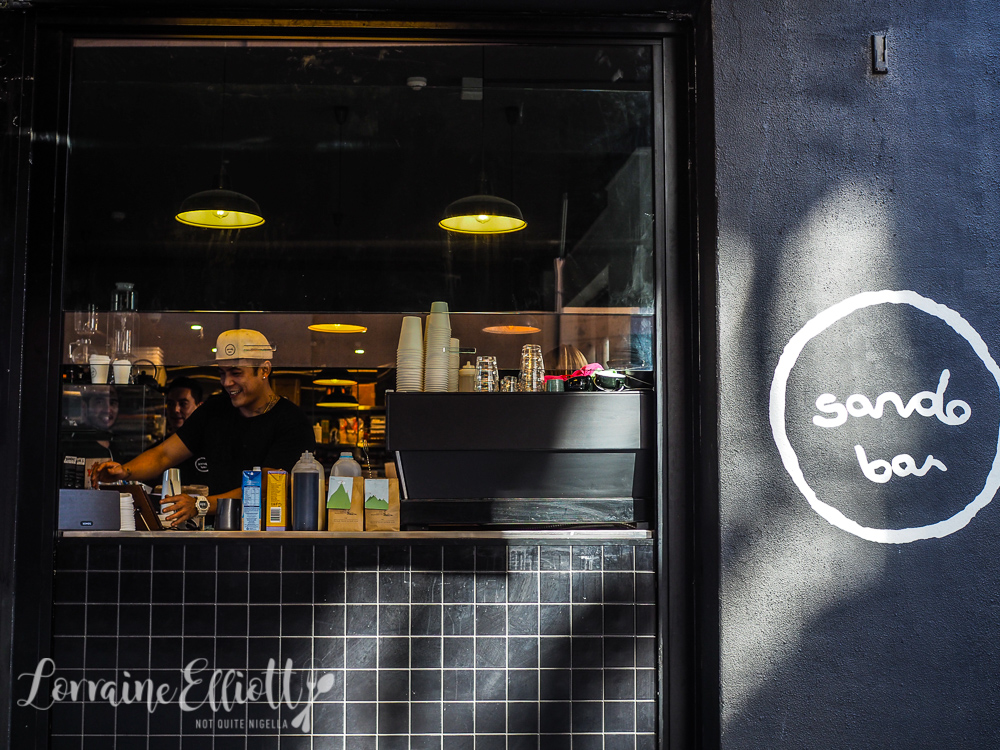 Sando Bar in Surry Hills is not your ordinary cafe or sandwich place. Named after its signature item the pork katsu sando or sandwich, it also serves up inventive Japanese twists on food. Former chef at La Lupita and Hills Bros, Naoya Shimada has teamed up with his high school friend Jay Reyes (Lox, Stock and Barrel) and the team from Tokyo Bird and Osaka Trading Co. to realise a dream of cooking food from his Japanese heritage. 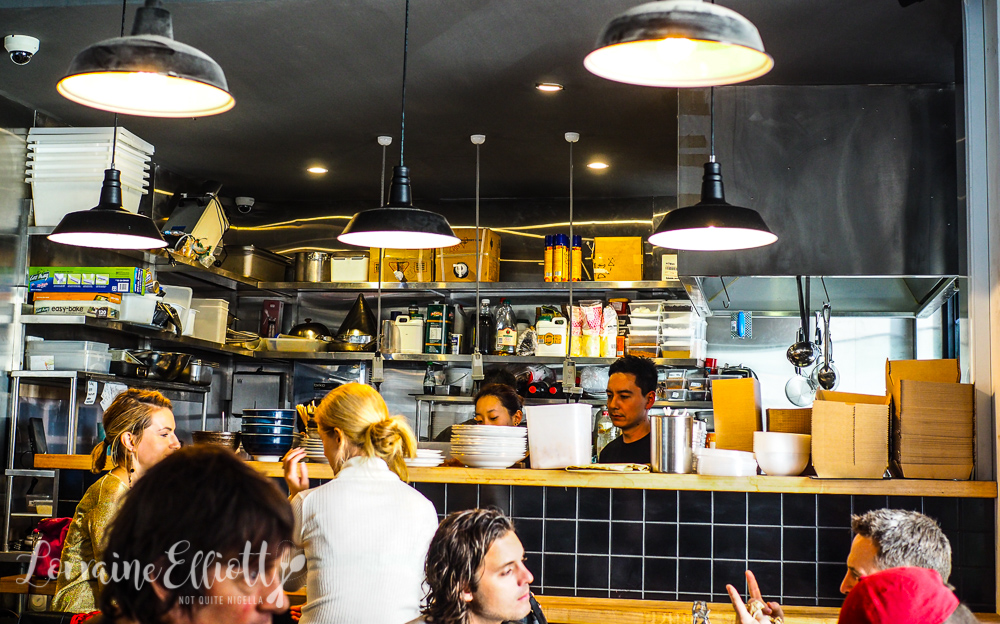 And surprisingly, it's a story I play a teeniest part in (although I had no idea about this until the day I visited). Naoya was cooking at Hills Bros but wanted to explore Japanese food more (he is half Japanese on his father's side). When he saw a picture that I took of scallops at Osaka Trading Co. he contacted Tina and Jason of Osaka Trading Co. and Tokyo Bird. Fast forward some time to Sando Bar, which is situated right next to Tokyo Bird. 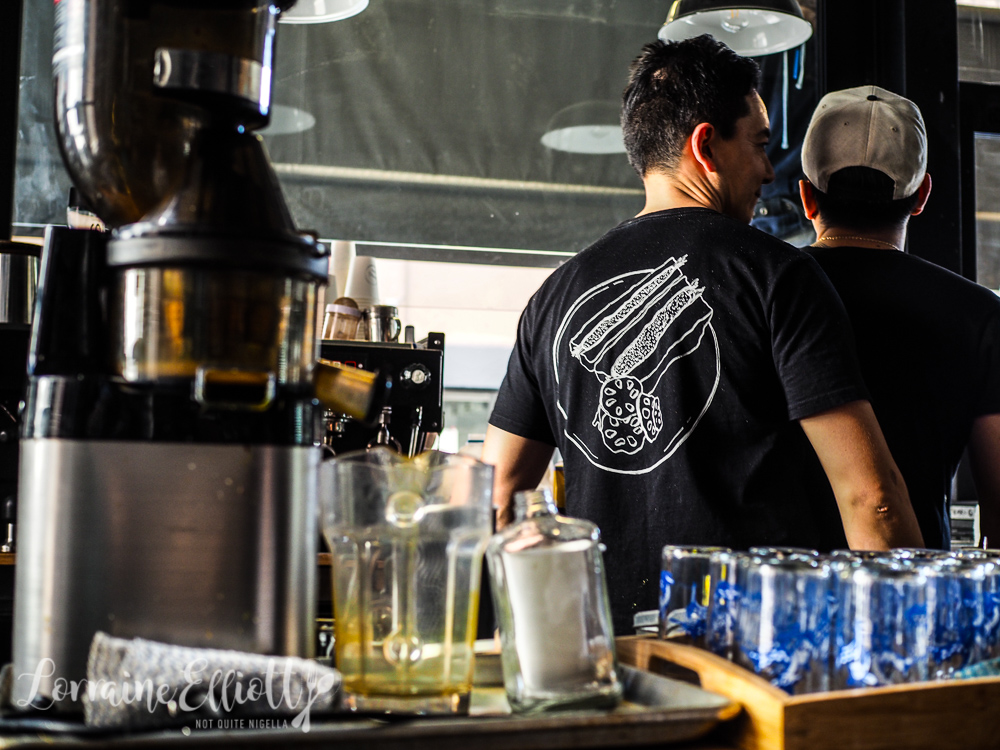 "The pork katsu sando took three months to create," says Naoya of the signature sandwich. It's the sandwich that graces the back of the staff's tshirts. After spending three months on perfecting one dish, it's no wonder that he was seeing sandos and he asked his wife to design the sando tees. 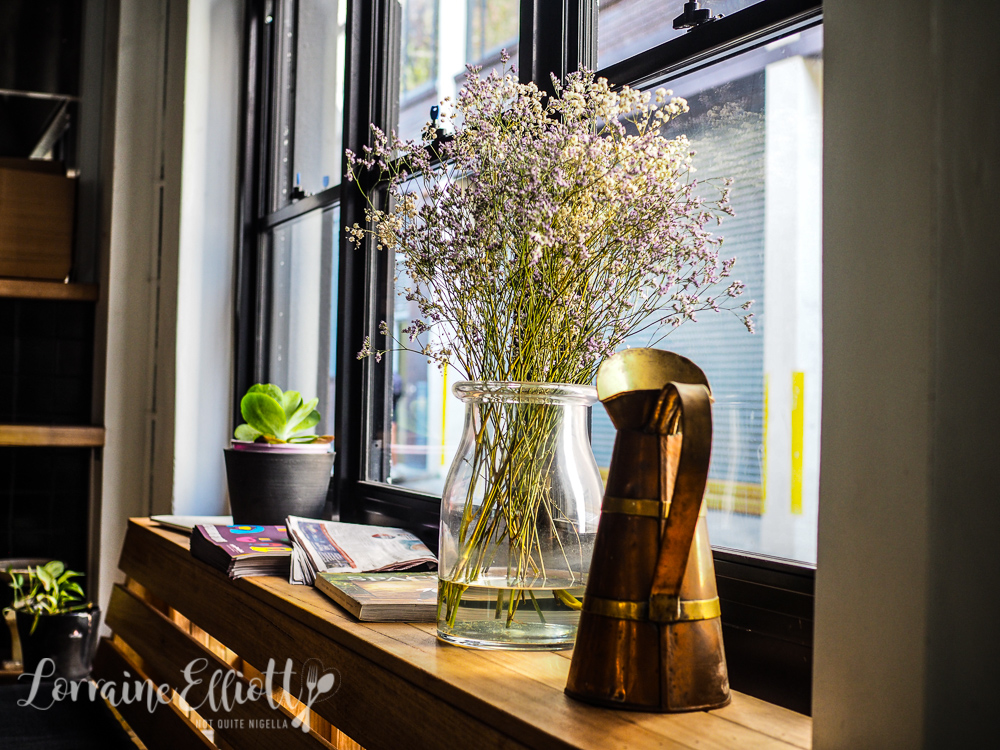 A friend once said to me that Asians aren't really known for their sandwiches. I took joking offence at that and replied with two words: "Banh mi". I should have also mentioned the katsu sando, the very Japanese sandwich that starts with a Tonkatsu pork cutlet, a fillet rolled in panko crumbs and deep fried. It's usually paired with cabbage slaw and sauce on white bread. It's an prime example of sandwich perfection provided you get it right. The pork should be juicy and tender, the outside crispy crumbed, with just enough salad and sauce to balance it, while the white bread cradles everything like a hug. 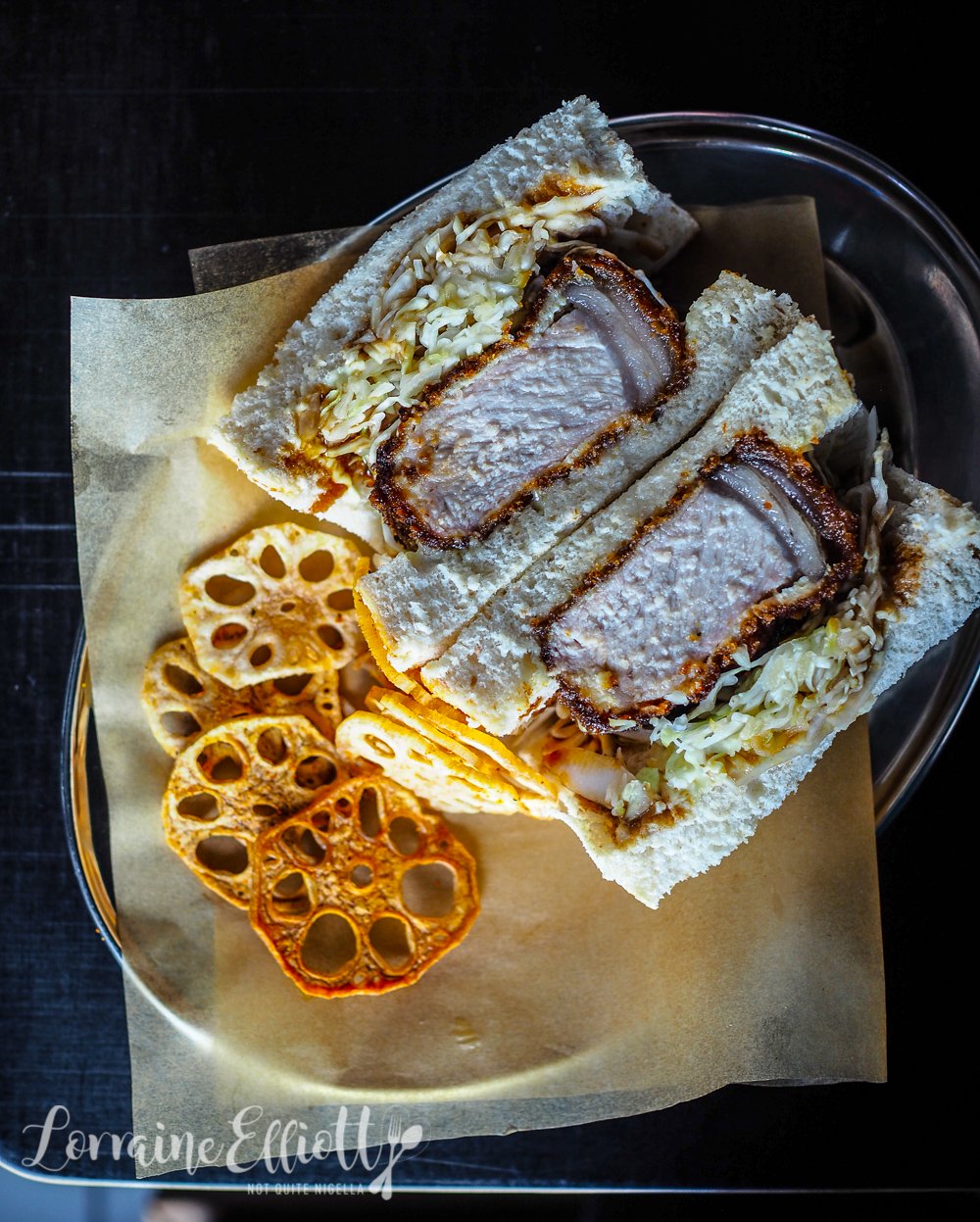 At Sando Bar, Naoya spins his own twist on the sando in a subtle way. While it looks the same, there are differences. He cuts the pork loin fillet opposite to the traditional way and then marinates it in shio koji, a seasoning and tenderising marinade that is enjoying a resurgence in popularity (he also experimented with sake, salt and mirin). There's a hint of appealing sweetness from the shio koji and each bite is a textural sensation. There's a thin layer of apple, fennel and cabbage slaw, mustard mayo and Tonkatsu sauce but the star is that superb, fat pork katsu fillet cooked perfectly all the way through but still juicy. Hint: don't share one, get one sandwich each. 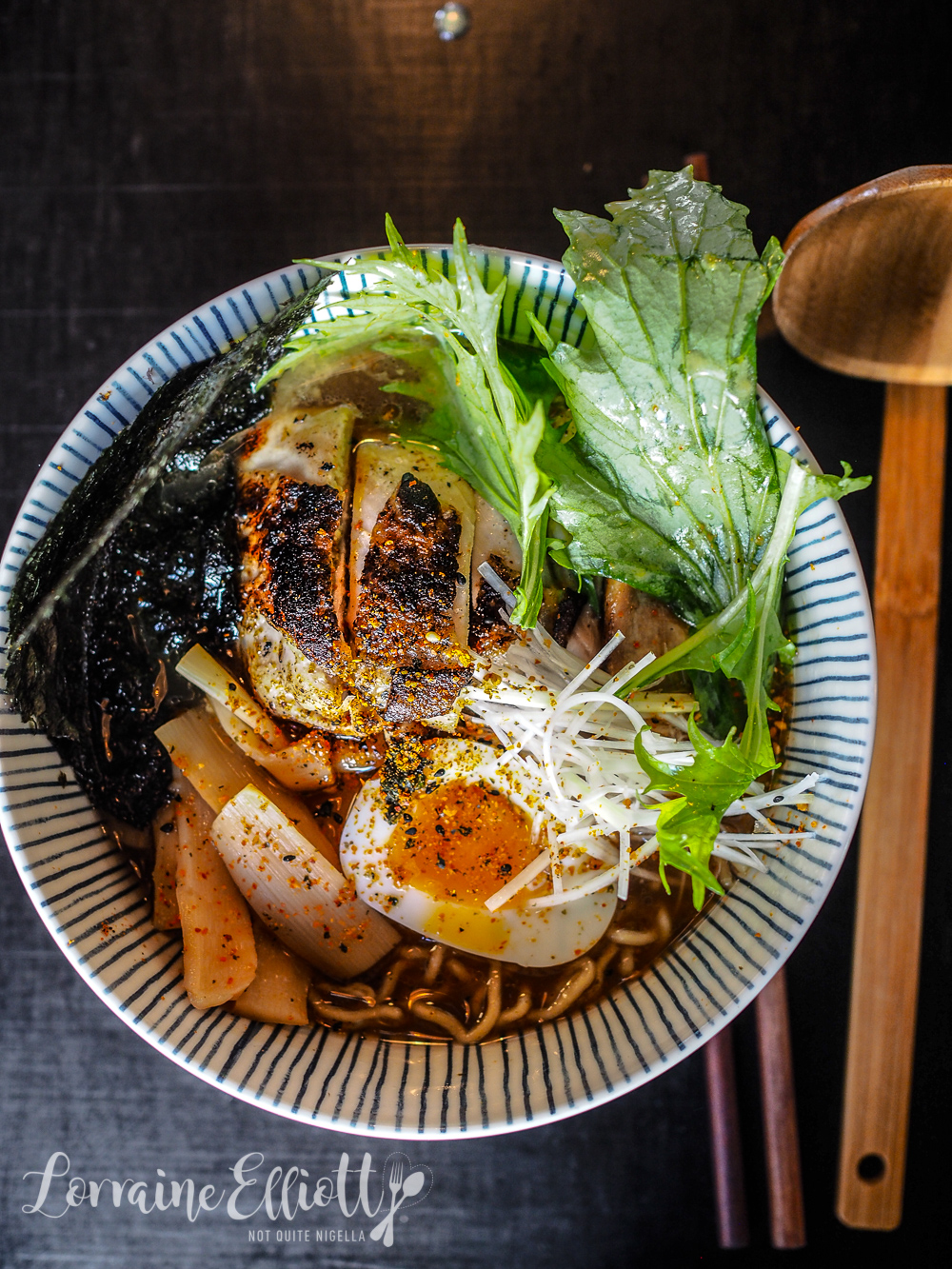 If you aren't into sandos (seriously why? We need to talk) then there are other things. Alas the Beef & Asahi Black Pie is sold out (it's currently super cold for us Sydney-siders) but there's plenty of other things. There's ramen which came together in the polar opposite fashion to the katsu sando and Naoya came up with it the night before they first opened. If you love roast chicken and the juices from a roast chicken then you may love this ramen. There's a bit of pork in the stock for texture and the chicken is sous vide in butter, garlic and yuzu to add more flavour. There's a soft yolked egg, bamboo shoots, a large sheet of nori and mizuna as well as well textured ramen and that roast chicken broth that unearths memories of spooning the sauce at the bottom of the pan onto your plate. 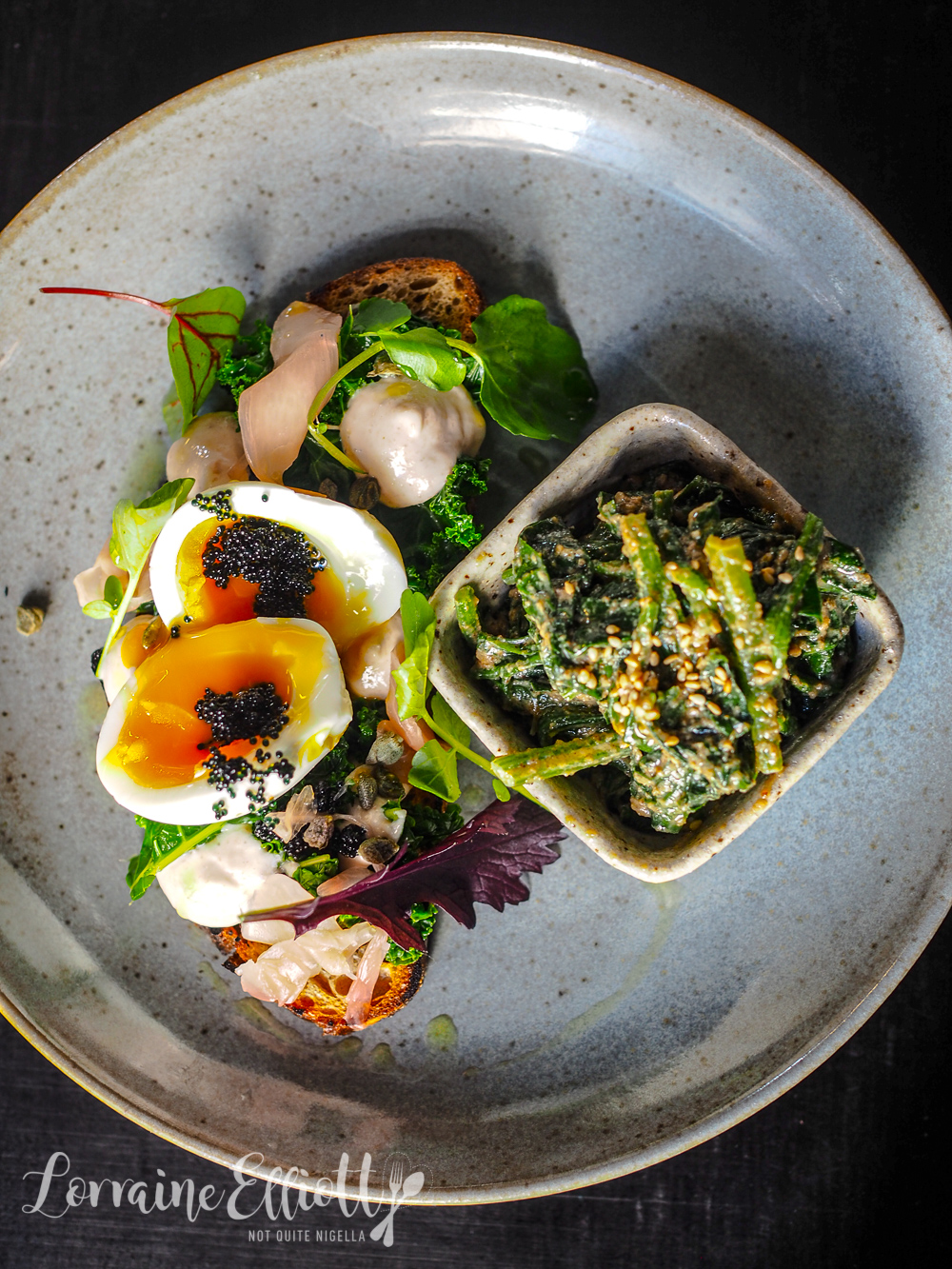 All The Eggs on Rye is a dish with 3 types of eggs. There's a soft yolked egg, halved and filled with roe and sits atop a slice of rye with Naoya's version of taramasalata made with mentaiko or pollock roe. The capers and pickled ginger do a nice job of lifting what could be a rich dish and there's kale because you need a bit of green. And to aid in that there's a side of goma or Japanese spinach with sesame seeds. 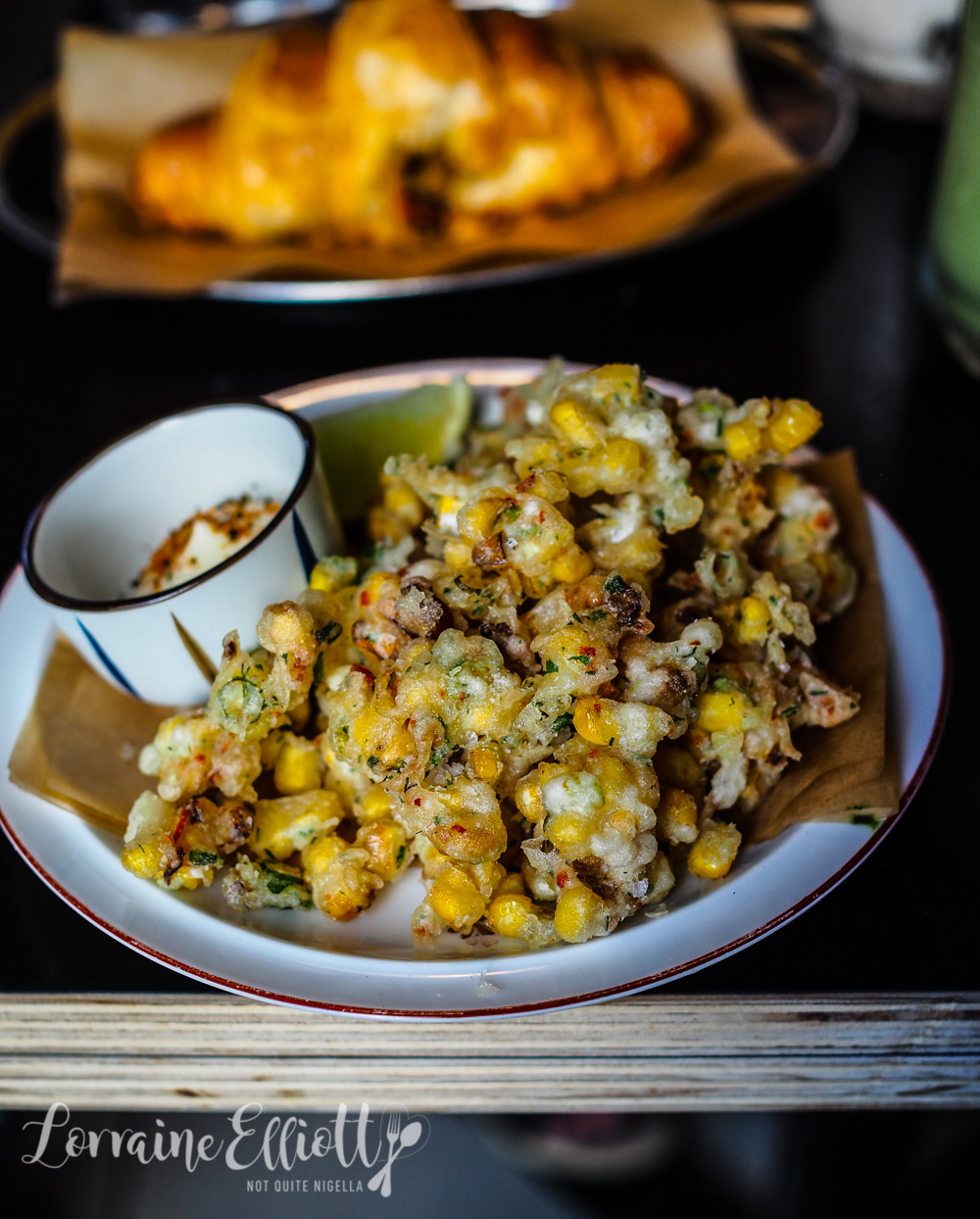 We also try a couple of extra bits and pieces. They're recommended to us by Jay and the first is a side of tempura corn fritter. It's great to add to the ramen or just as finger food - the sort you keep picking at. 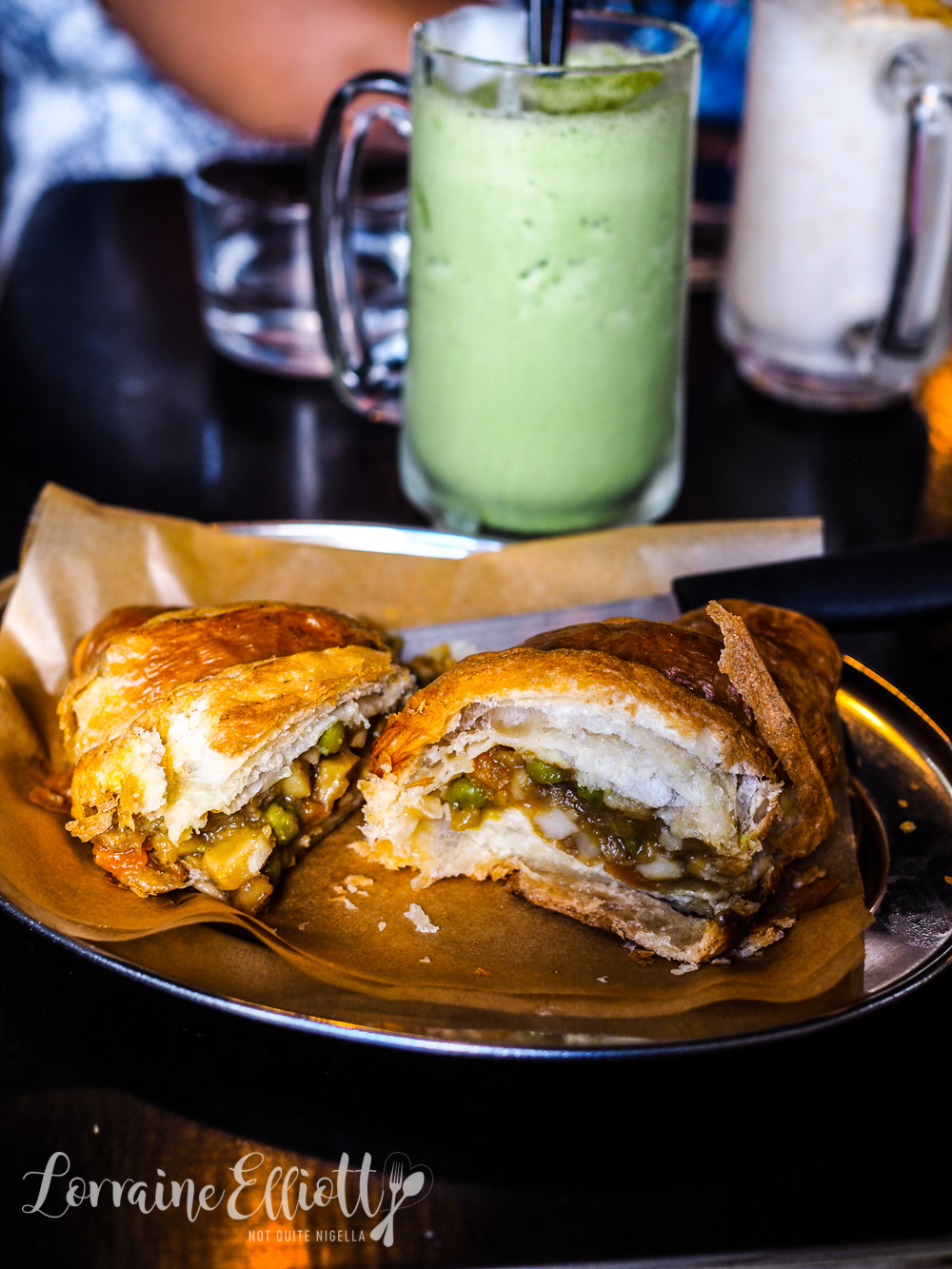 Once I saw the curry filled croissant on Instagram I knew I had to try it. For Jay it evokes memories of curry puffs and for Naoya it's the Japanese Kare Pan from convenience stores. They generously fill a warm Brickfields croissant with Japanese potato, carrot and pea curry. It's buttery, crunchy comfort food with a soft belly of curry inside. 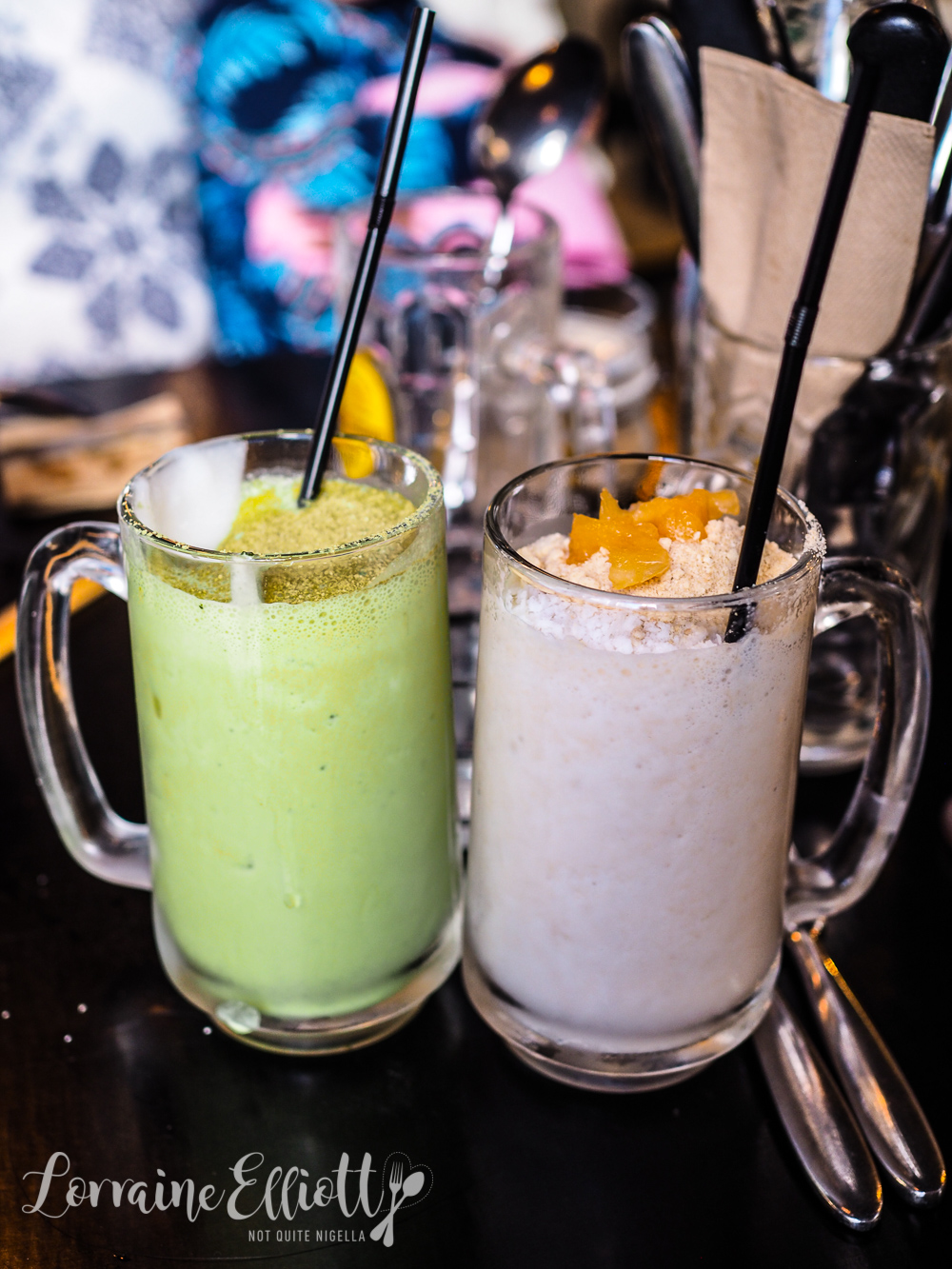 On the drinks side there are coffees and teas but my interest is piqued by the shakes. The matcha and sticky rice shake is rich in matcha and is designed to be a less sweet alternative to the Melon Pan shake. It's made with sticky rice cooked in sugar syrup and pureed and then mixed with matcha and ice cream with sticky rice on top. But I'm smitten with the coconut melon pan shake. If you've ever had a melon pan bread from a Japanese bakery it's really a shake version of the sweet melon flavoure. 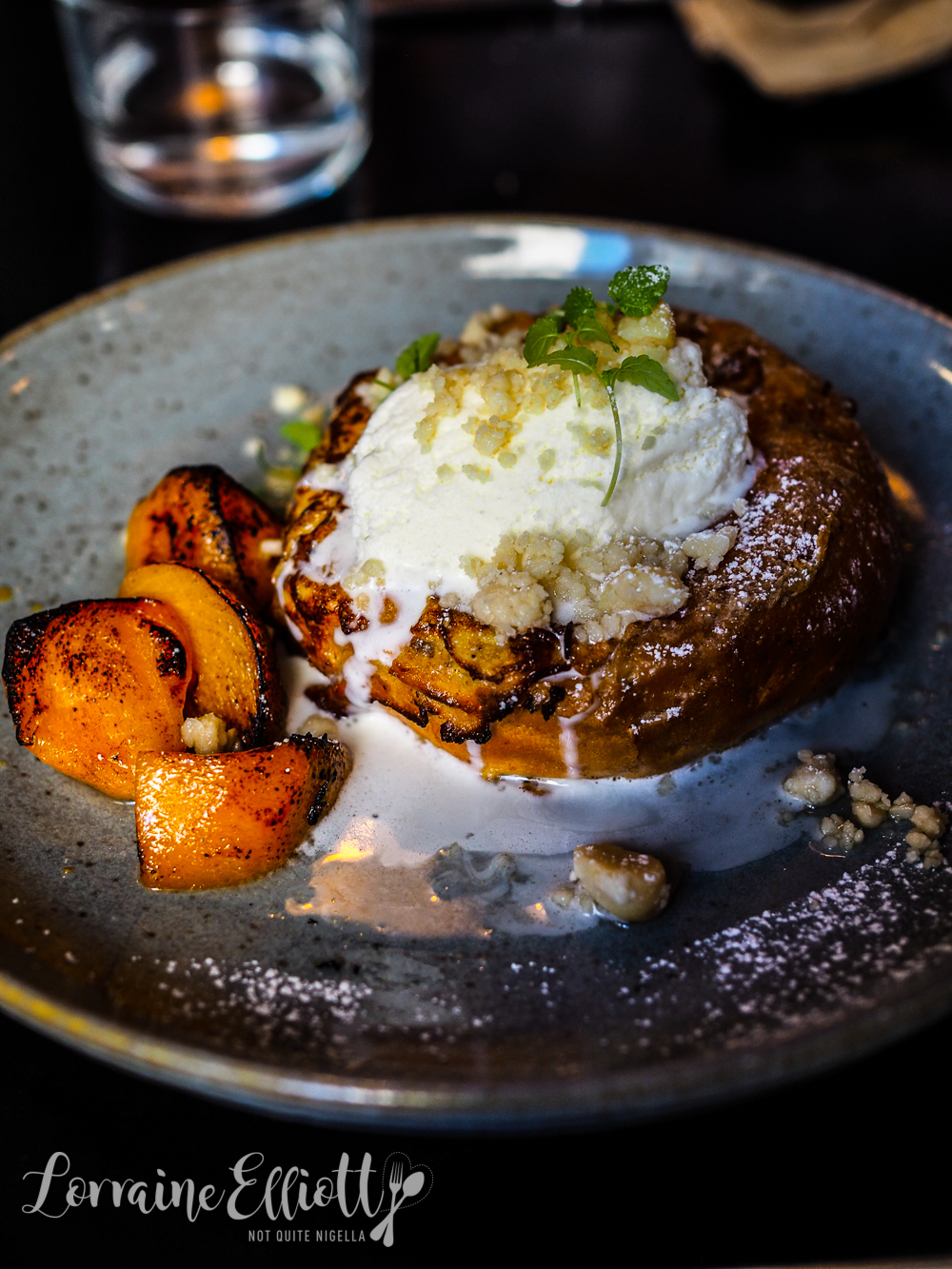 For dessert there's French toast although by now Louise and I are both full but that's what happens when you leave me to order. The Japanese twist is that it is made with a milk bun filled with a dab of shiso and black plum jam. There's also chunks of poached persimmon, umeshu plum wine syrup, macadamias and vanilla ice cream. Naoya leaves the jam sparing so that it isn't overly sweet so there's no huge gush of filling coming out when you cut into it. It is still on the sweet side though and certainly worth saving some room for.

So tell me Dear Reader, do you like sandwiches? What is your favourite type of sandwich? And what is your heritage and do you cook from it much?