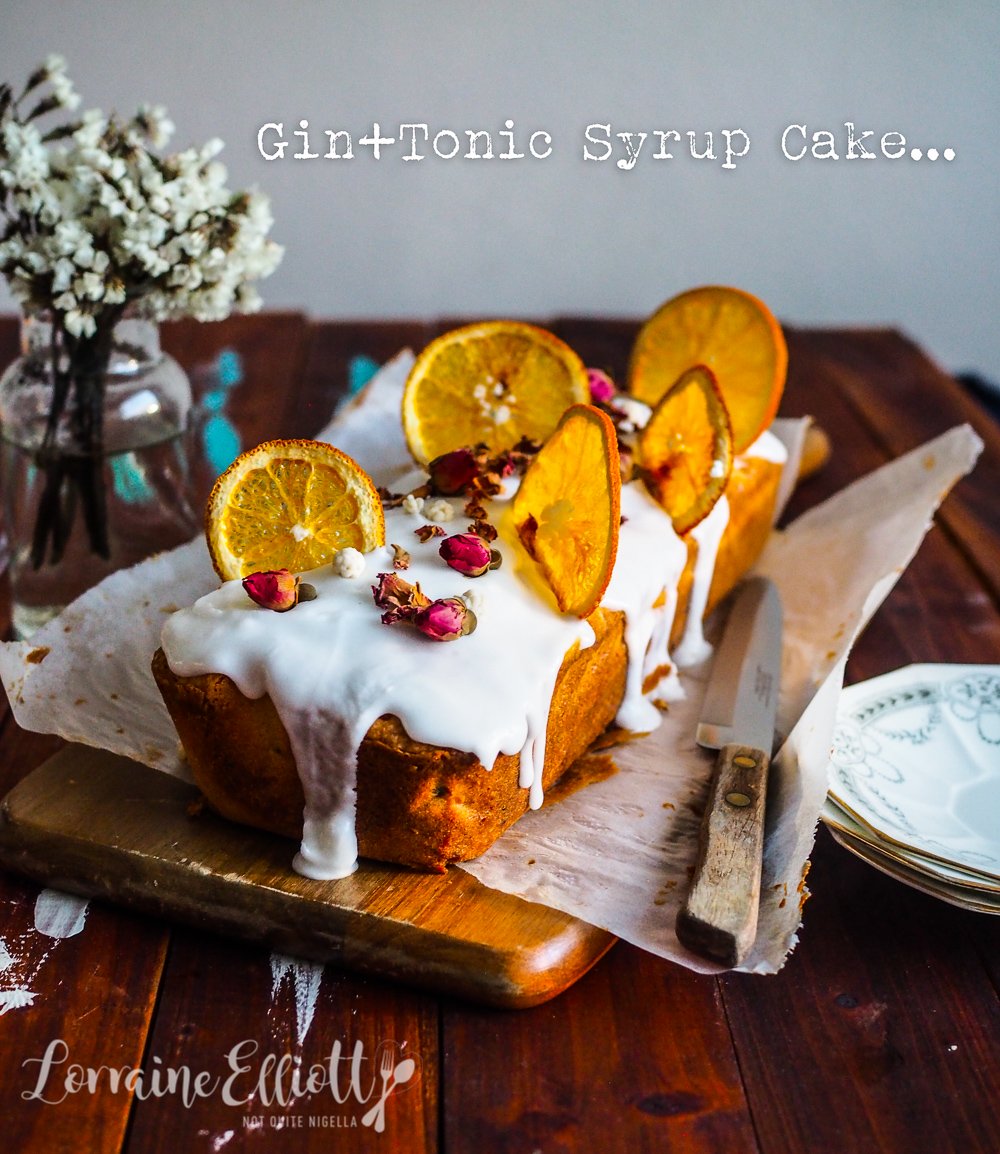 Love Gin & Tonics? Try this citrus and spice pound cake with all of the flavours of your favourite tipple. It's a triple boost of G&T with a G&T syrup in the cake plus a G&T icing! There's also juniper berries, cinnamon, citrus and more spices in a buttery, soft pound cake. I called her Gertrude.

The texture of this cake is divine-so rich, tender and buttery and yet it easily carries the spices and flavours of a G&T with peppery juniper, cinnamon and citrus. Pair with a G&T or a cup of tea!

Dear Reader, I recently needed a cocktail badly, oh so badly. I was at the airport on my way to Thailand. I had arrived in plenty of time but when I tried to check in at the Qantas kiosk the machine told me I needed to go to a check in desk. There they told me that the Qantas flight was cancelled last night and that we would be transferred to the Thai airways flight leaving 10 minutes later.

It all seemed fine-easy even. Our small media group were some of the lucky ones because we had a transfer from Bangkok to Phuket. Others who had made their way to the airport that morning that didn't have a transfer would fly out that night with Emirates and they were queuing not so happily at the Qantas sales desk to be reissued a ticket grumbling about having to come back later that night. 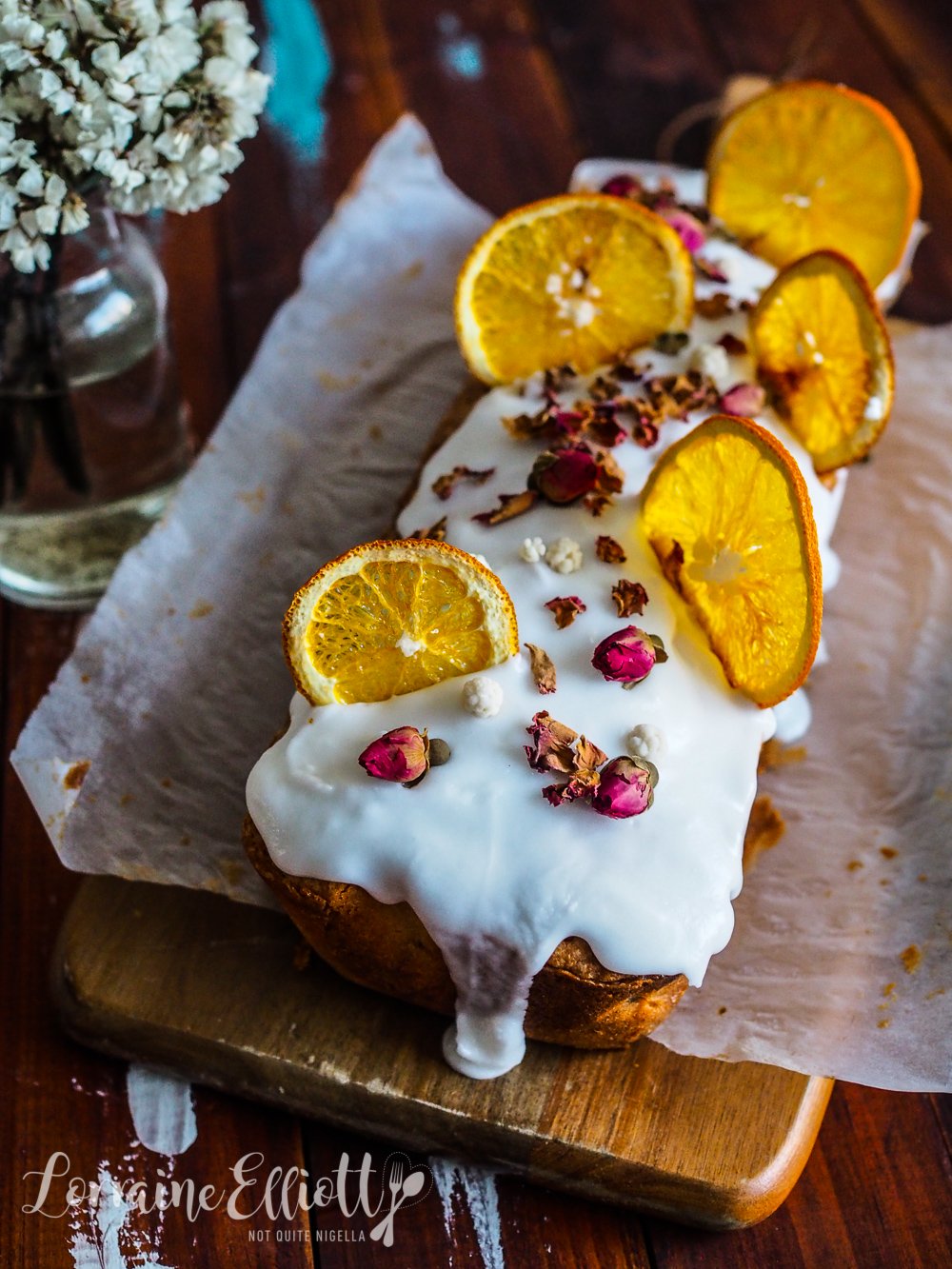 When I got to the head of the check in queue at Thai airways the man furrowed his brow. "There's something wrong with your ticket. We can't check your bags all the way to Phuket," which seemed odd because he had just checked in my travelling companion on the same ticket and she was on her way to enjoying some pre-flight shopping. "You need to speak to Qantas," he said before adding, "You have 15 minutes...MAX".

I took all of my bags over to Qantas's service desk and was then directed to the sales desk. I was rapidly starting to regret missing breakfast as I ran between counters with my bags in tow. Once I got to the sales desk I saw an enormous queue. There was a man who was mid-rant. I didn't want to interrupt him lest I become the target of his anger but after a few minutes I had to interrupt. I explained the situation and that I now had less than 10 minutes and the woman directed me to the front of the queue. The woman behind the counter was helpful, especially given the amount of grief she was probably being given. After a few minutes she fixed it and I was on my way dragging my bags back to the Thai counter, regretting packing so many pairs of shoes and hats (so many hats).

I rushed back breathlessly, "They've fixed it," I said. The woman punched at her keyboard and her brow furrowed, "Err no, now they've cancelled your Sydney to Bangkok flight." Sensing my panic she said, "I'll try calling them, are they busy there?". I said that yes they were very, very busy. They didn't pick up and after waiting a minute I asked if there was anything I could do. "Yes go run back to Qantas with your bags and get a print out of your ticket saying both sectors are valid. And you have 5 minutes at the most." I looked at the time-it was 9:15am and boarding had started at 9am. 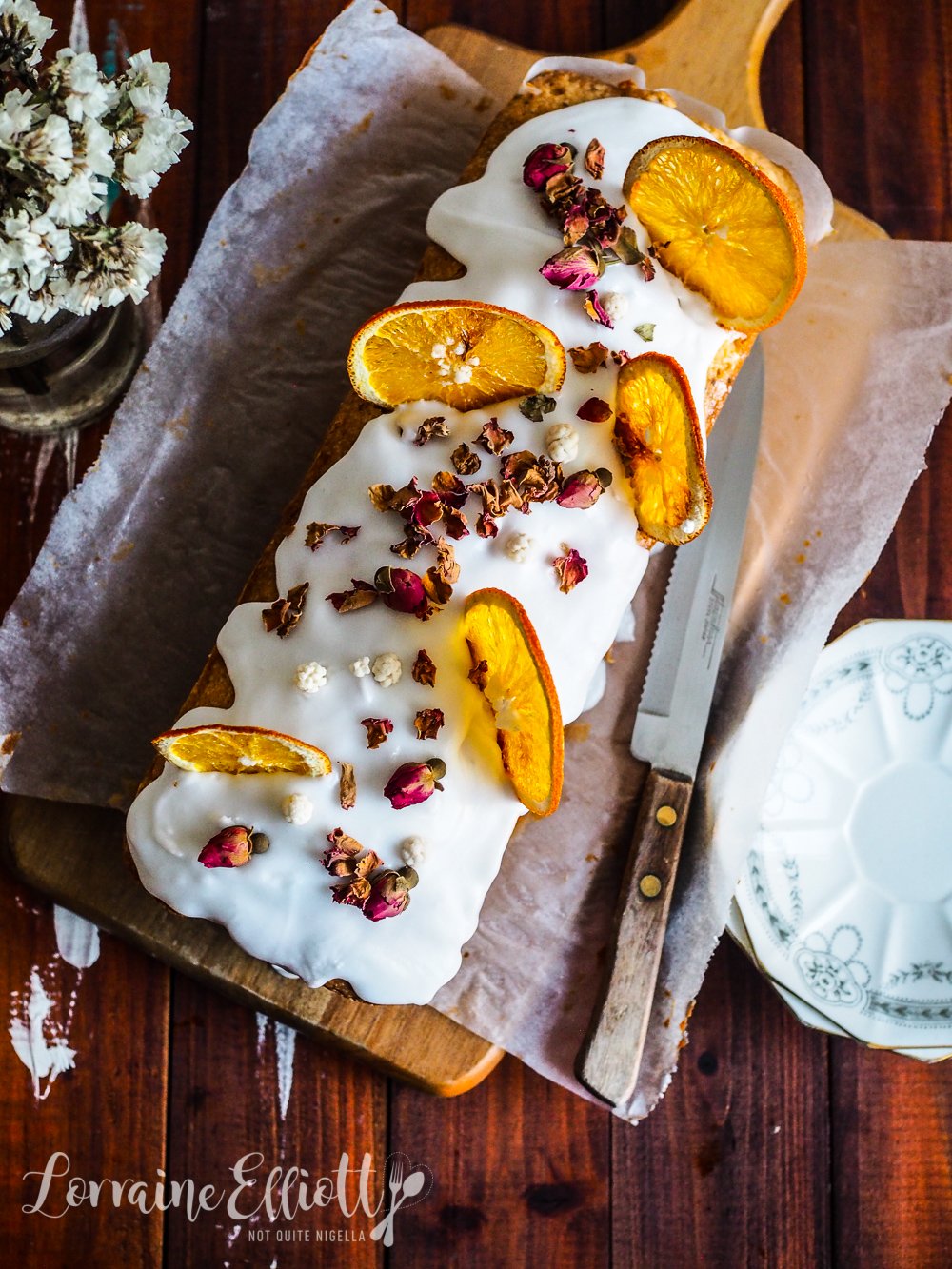 I ran straight to the woman that helped me before. "They say that now the Sydney to Bangkok sector has been cancelled!" I said breathlessly. The Qantas woman quickly printed out something and said, "I'm coming with you!" and I've never been so happy for company ever. She ran with me to the Thai airways counter.

Qantas and Thai airways staff discussed things back and forth-something was wrong with my ticket and the Qantas lady got behind the counter and did her thing. I still don't know what was wrong (or even why the original flight was cancelled) but I got my bags on, gratefully took the express pass I was given and wished with all my might for short queues. I got my wish but of course I was at Gate 60, the furthest gate. And I met my travelling companions breathless, hands shaking and just glad to get on the flight!

"Oh you made it!" said the man that originally tried to check me in-I think even he doubted that I would get on the plane. But where there's a will there's a way and yes I gratefully accepted the cocktail during our meal service. 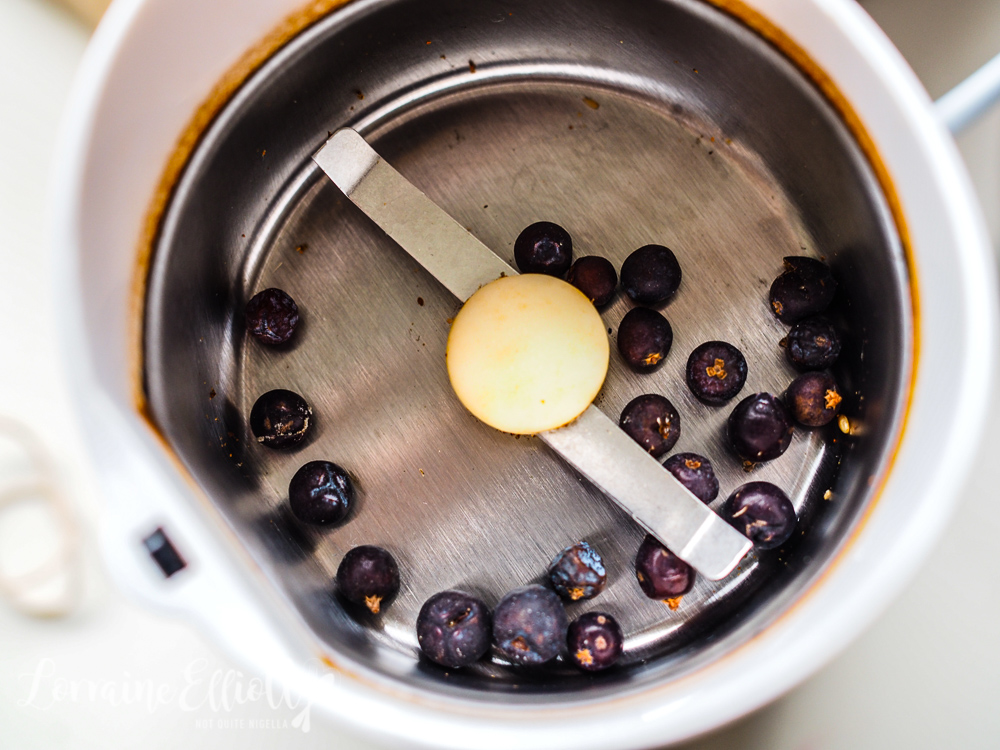 Step 1 - Preheat oven to 150C/300F and line a loaf tray on the base and sides. Beat the butter until it becomes pale white-around 5 minutes on high speed. Add in the sugar and beat for 2 minutes. Then beat in each egg one at a time until well incorporated. On the lowest speed, or by hand, add in the flour, buttermilk, lime and orange zest, ground juniper berries, cinnamon and nutmeg and mix until just combined. 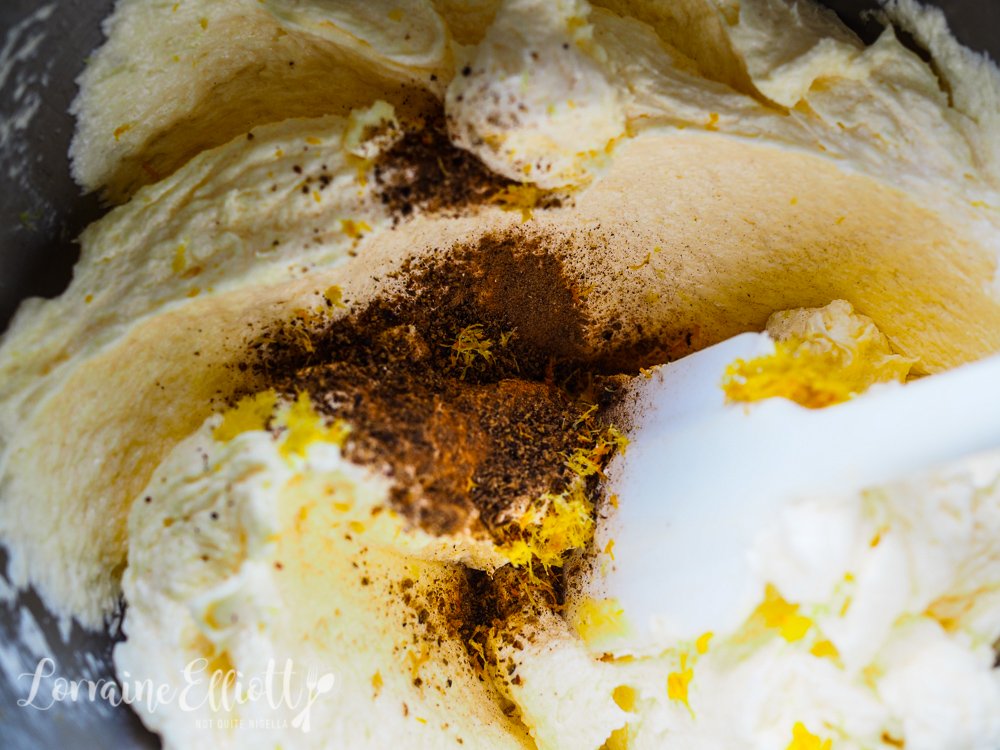 Step 2 - Spoon into the prepared tin and bake for 1 hour 45 minutes or until the centre springs back when touched. 10 minutes before the cake will be done cooking, make the syrup. Boil the tonic water, sugar and lime juice until reduced by half. Then add gin and keep warm. When the cake is ready, poke about a dozen or so holes in the cake and pour the syrup into the holes where it will absorb the syrup. 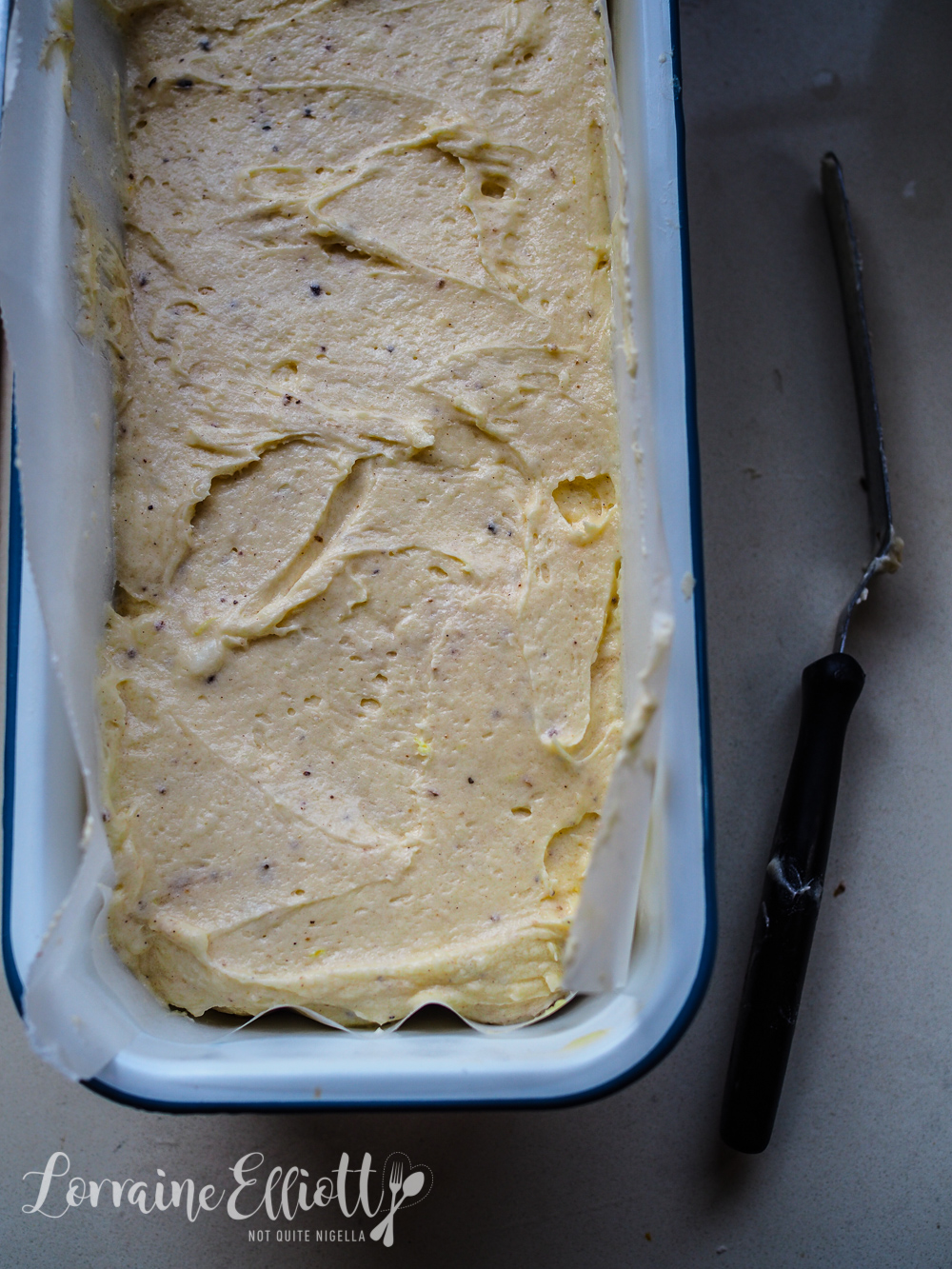 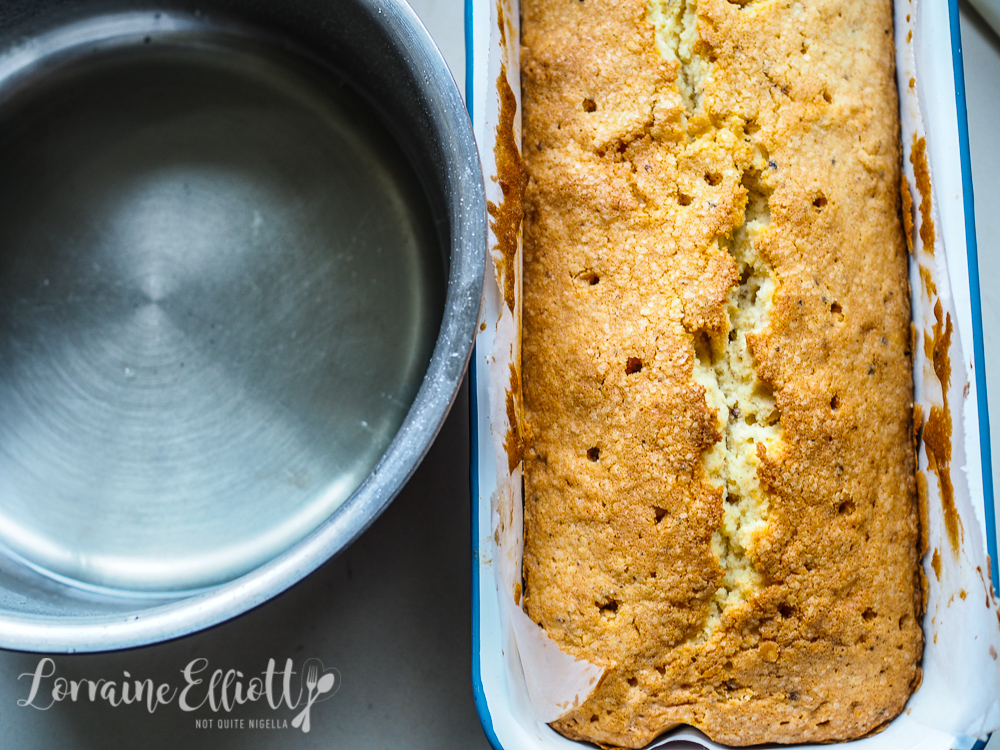 Step 3 - Mix the icing sugar, tonic water and gin. I do it the lazy way because I loathe sifting so I pop the icing sugar in a food processor and blitz until the lumps are gone and then I add the tonic and gin. Drizzle over the cake. Decorate with edible roses, oven dried oranges and coriander sweets. 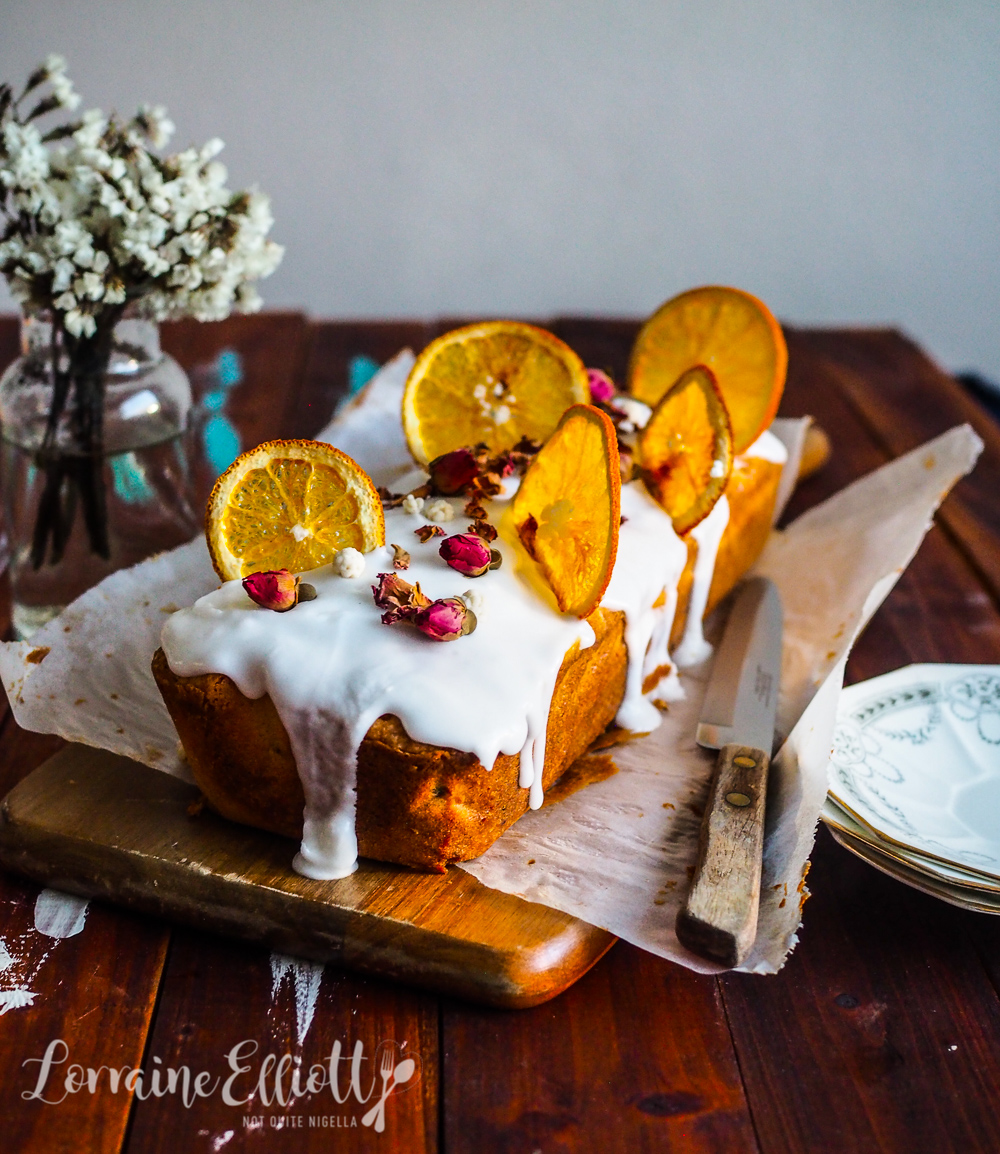 How to make oven dried oranges 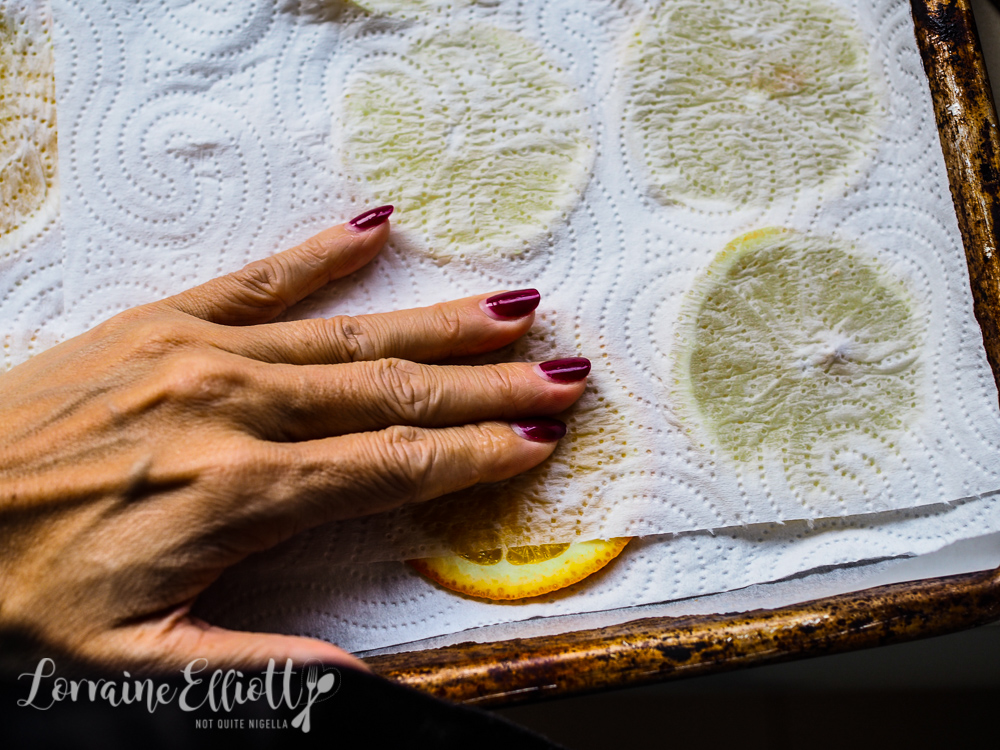 Preheat oven to 120C/248F and line a baking tray with parchment. Slice the oranges thinly, not more than 1cm thick and then press against paper towels until it has absorbed all the excess juice. Sprinkle with icing sugar and bake for 1 hour or until dried out and caramelised. 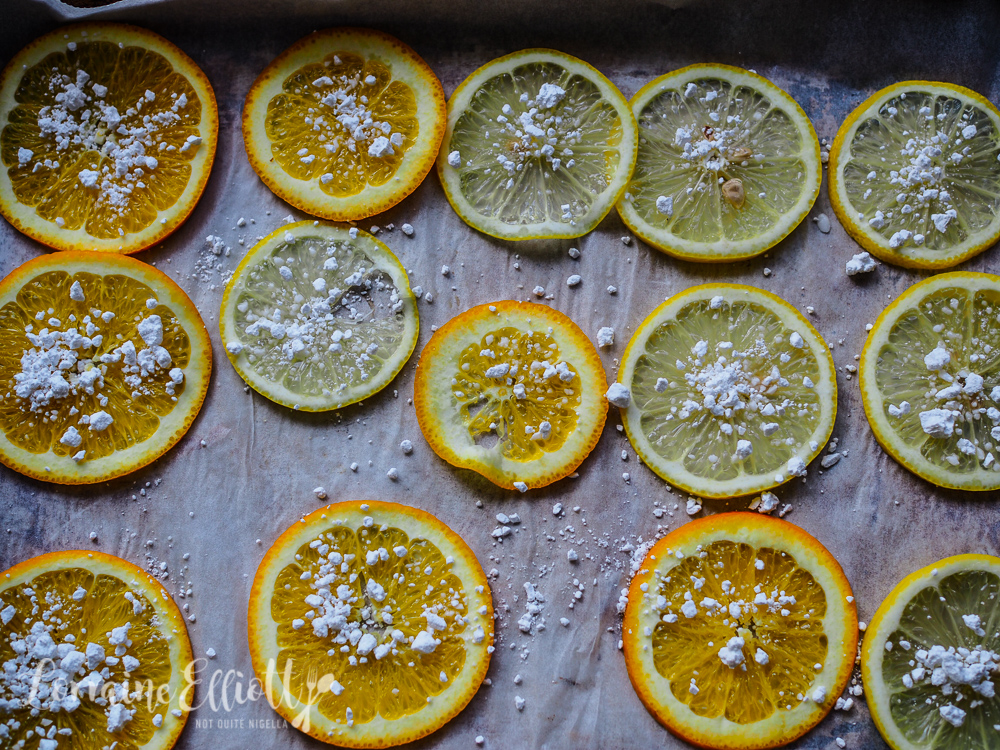 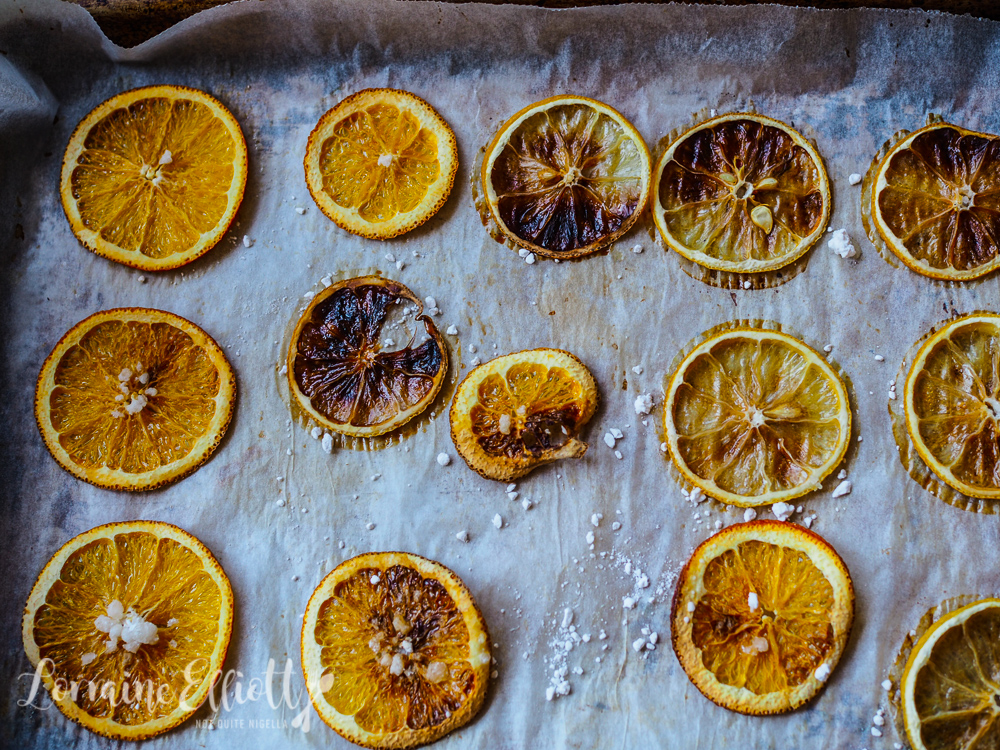 The lemon slices were less successful than the orange slices