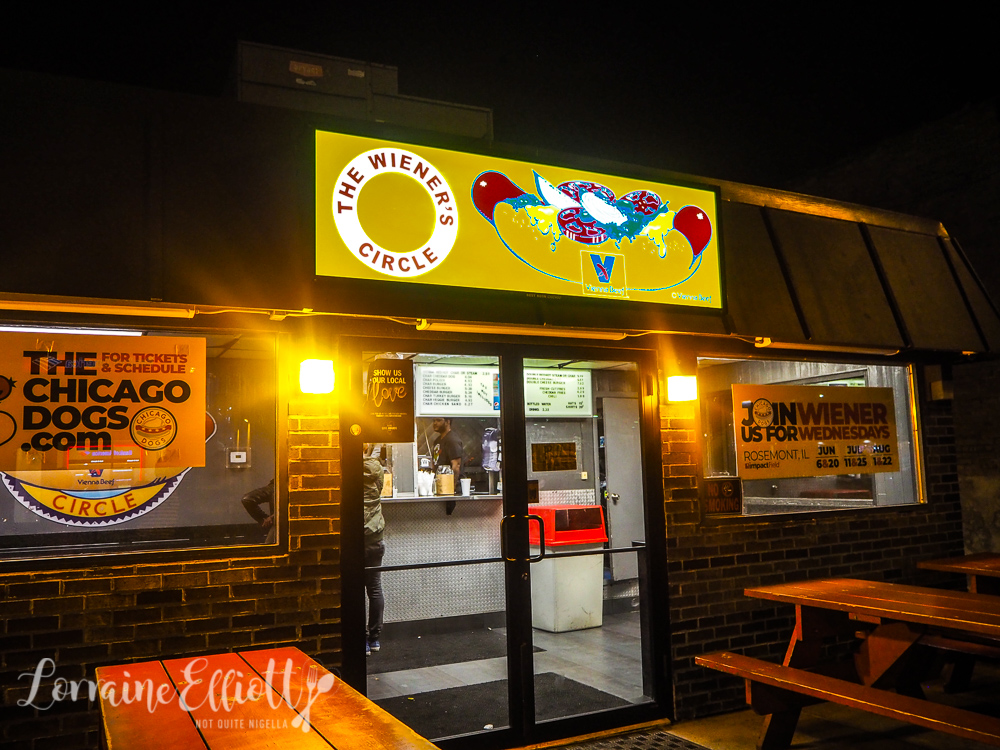 I recently ticked off a bucket list item while I was in Chicago. Whilst I am no masochistic, I was curious about a genre of eatery I had seen on television. In America certain establishments serve their food with a side of humorous abuse. It can go both ways with the customer and server riffing off each other or it can be one way from the server to the customer.

When a friend told me that Weiner's Circle in Lincoln Park was great for hot dogs with a spicy side I wanted to see it for myself. But because I was in Chicago pretty much by myself and nobody else in the media group was really interested in going and I wanted someone to film the whole thing, I figured it would stay a curiosity, another bucket list item yet to be ticked. 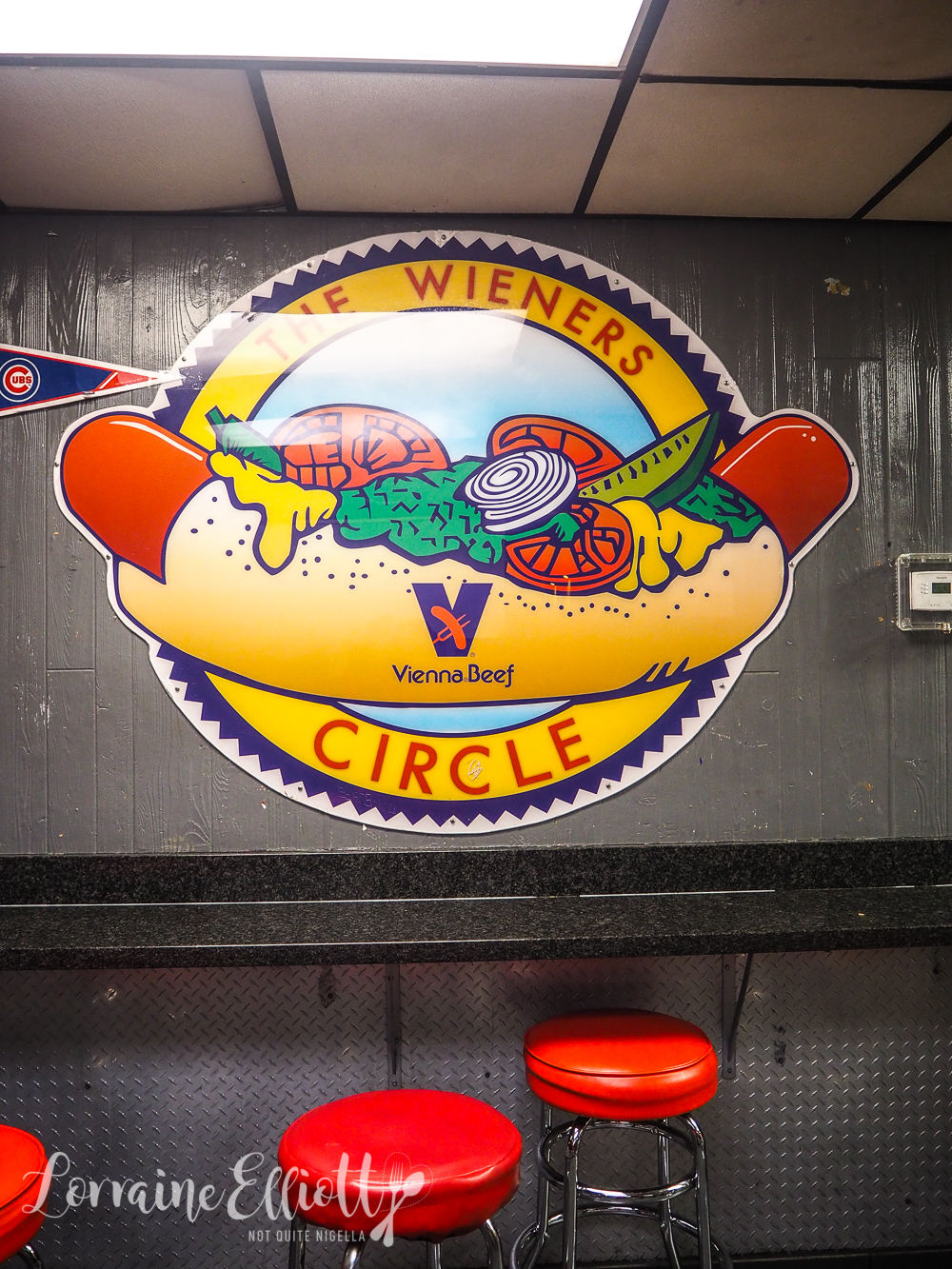 Until one night I met a Chicago based food writer friend at an event. Joey and I first met in 2013 during a trip to Chile. We had lunch together and then I was supposed to go off and do my own itinerary. He didn't have anything to do that afternoon so I asked him if he wanted to come along because for me, the more the merrier and we got along so well talking about food.

We kept up contact as friends on facebook but hadn't managed to connect during this trip because he was so busy at work because it was a big food week being that Chicago was hosting the James Beard food awards. I was an event called Chef's Night Out and I knew nobody. And just at the point that I was about to leave the event, I saw him and he invited me to join him, his partner Ian and his friend Cody all night. 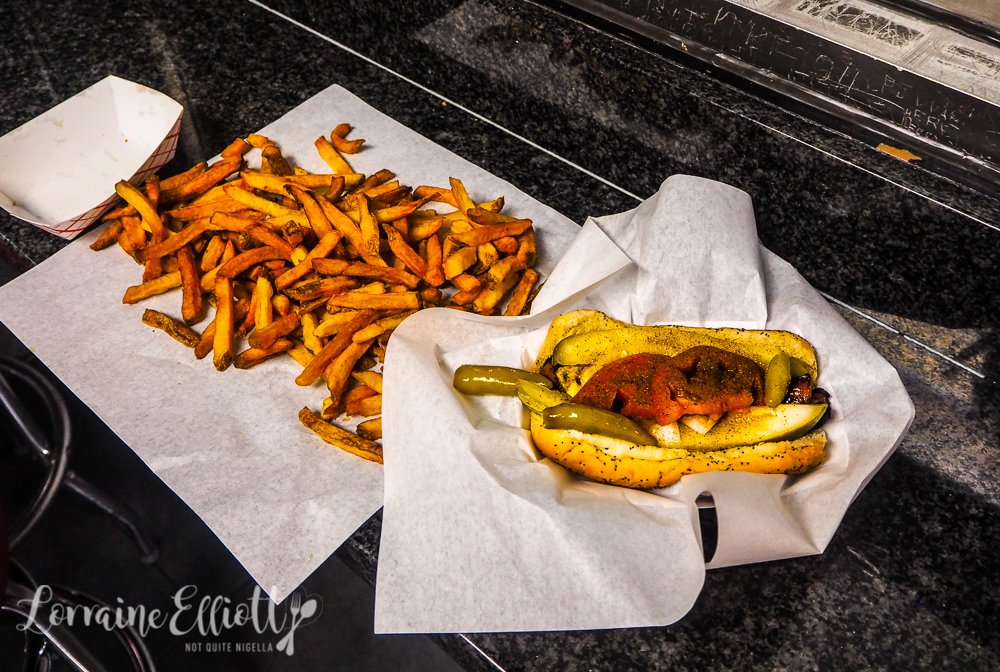 We got to talking and I mentioned that I was dying to try The Weiner's Circle. "I LOVE Weiner's Circle" said Joey with his hand on his heart. "LOOOVE!" he added for emphasis. After we spent a few hours at this event and I learned a new saying, "My puppies are barking" (aka my feet are sore), we headed to The Weiner's Circle.

Joey warned me that I should brace myself for the abuse, "You may cry." He said that he would film it while Cody who is an actor promised to ad lib and Ian said he would hide because he wasn't into the abuse. After midnight we walked into the eatery where there was a man behind the counter.

"What you two dickheads want?" he said to Ian and Cody. Joey who was off to the side filming said, "What about her?" pointing at me. 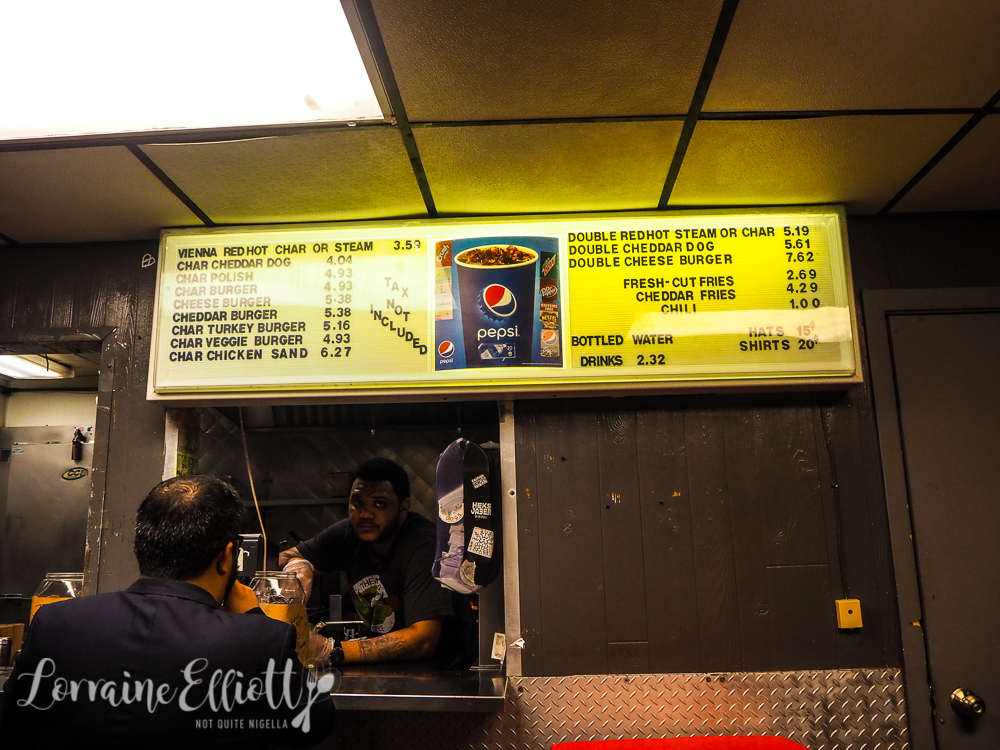 The man looked me up and down for what seemed to be a minute while I held my breath. Finally he said, "I like her," winking. I didn't get off scot free though. I was wearing a red coat and he dubbed me "Little Red Riding Ho" and made a reference to Rush Hour movie to which Joey replied, "Only SLIGHTLY racist". Kids are apparently off limits to abuse unless the parents indicate otherwise and Joey tells me the women that work on Saturday night are much, much saltier.

I tried to order the trump hot dog which is a half size weiner but instead of calling it a hot dog he would refer to it as "dick". What size of dick you want?" he said. "Large?" I answered slighytly confused because there is only one size and he said, "I can tell from your red lips".

We order four Vienna dogs and a side of fries. It is a beef sausage topped with slices of tomato, yellow mustard, chopped white onion, dill pickle spear, sport pepper and celery salt and most definitely no ketchup. 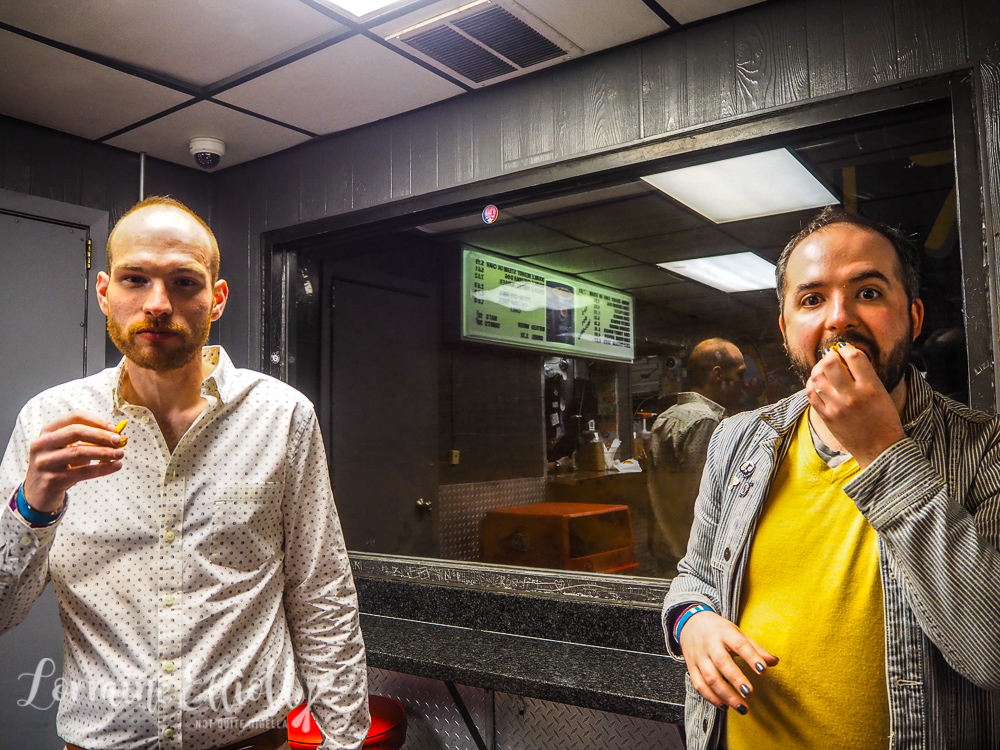 Chicagoans are proud of their unique take on hot dogs. Some say the Chicago style dog was invented by two European immigrants Samuel Ladany and Emil Reichl, at the Chicago World's Fair and Columbian Exhibition in 1893 by Vienna beef (the same place and time where brownie was first served!). It was then offered at a hot dog stand called Fluky's and its inexpensive price meant that it was dubbed the "Depression sandwich". Some say that the beef sausage was because the owners of Vienna Beef and Fluky's were Jewish so pork was not used.

But even during the depression, hot dogs were still expensive at a nickel so to make it stretch even further, vendors started adding what are now known as the Chicago style toppings of pickles, peppers, onions and salad to extend the offering for the price. 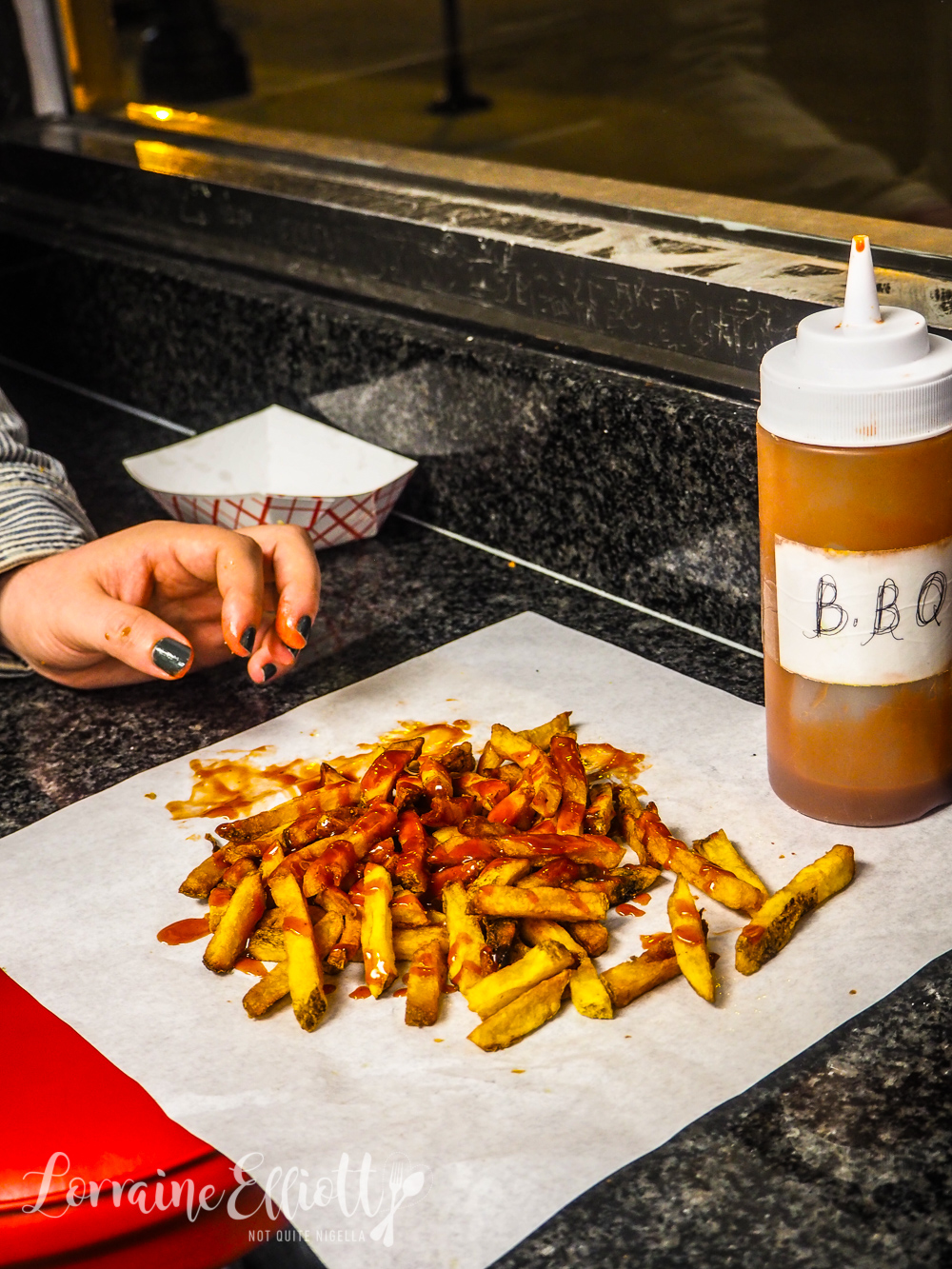 And so what is it like? They use Vienna Beef sausages and the hot dog is salty because of the generous amount of celery salt on top. The absence of a sweet condiment like ketchup exaggerates this. The sausage however is delicious-there's a snap to every bite of sausage and for $3.10USD you can't beat that. The fries look like skin on hand cut fries, spread out with some bbq sauce that Ian squeezes.

It is one food that is the whole sum of the experience. It's the way that the staff read you at a glance and dance with you that makes the experience so unforgettable.

When he asked who was going to pay I said that I would get it and he shot that idea down. "You ain't paying for anything lady, you walked in here with three dicks and six balls...".

So tell me Dear Reader, would you visit The Weiner's Circle? Have you ever tried a Chicago style hot dog? Do you think you'd like the additions?