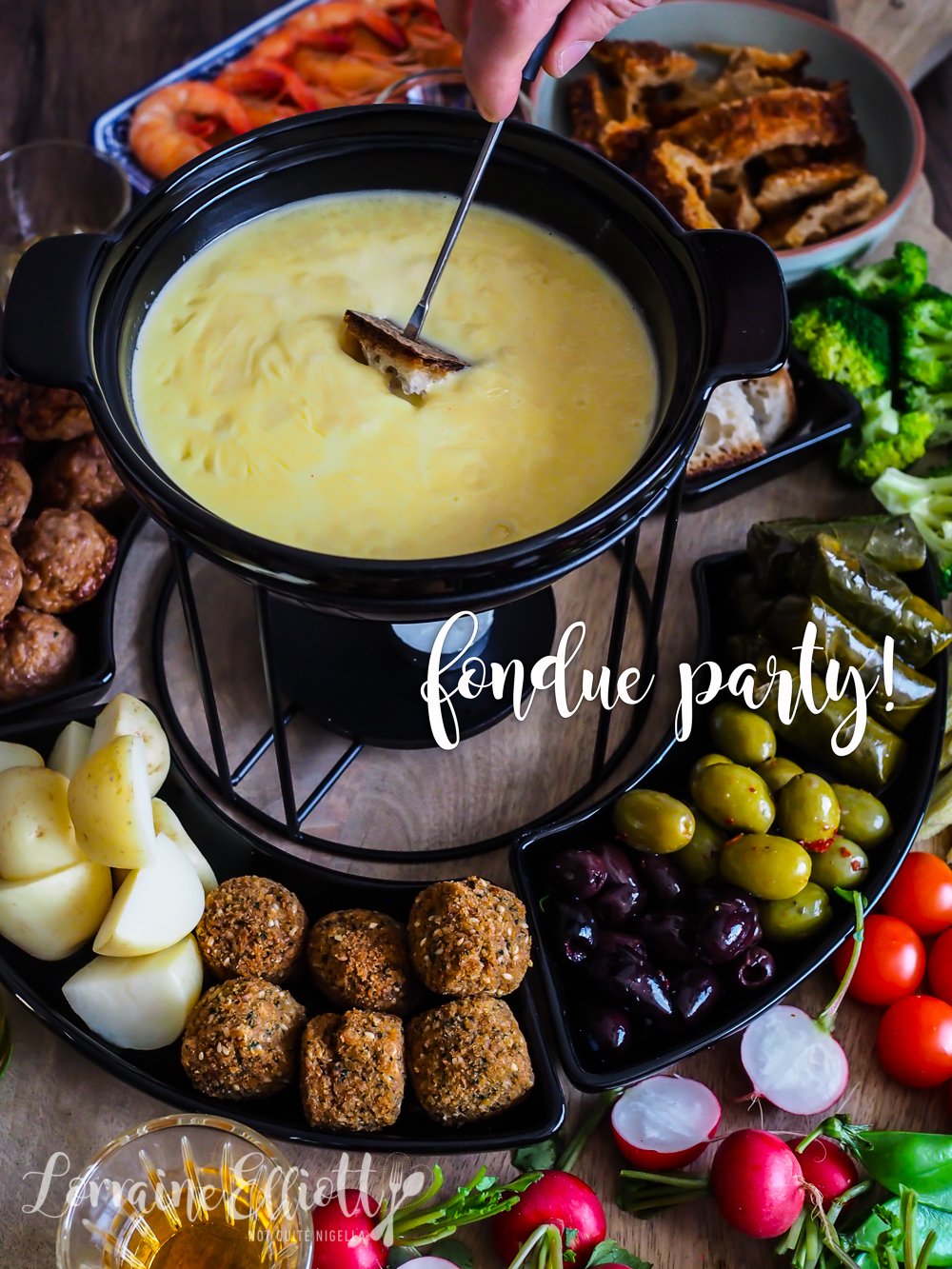 It's the season for fondue and whether it's a cheese fondue or chocolate one (or both!), fondue is one of the most fun meals to have with a group of friends. This winter, invite some friends for a fondue night, hot buttered rum and pyjama party!

Most of you are already familiar with fondue, the Swiss dish of melted cheese into which you dip bits of food. Fondue comes from the French word Fondre which means "to melt". A cheese fondue starts with a cut garlic clove rubbed against a caquelon or pot. Then in a saucepan you combine a mixture of Swiss cheeses, wine and cornflour to melt before transferring the cheese mixture to the caquelon. It is kept warm using a candle or spirit lamp. 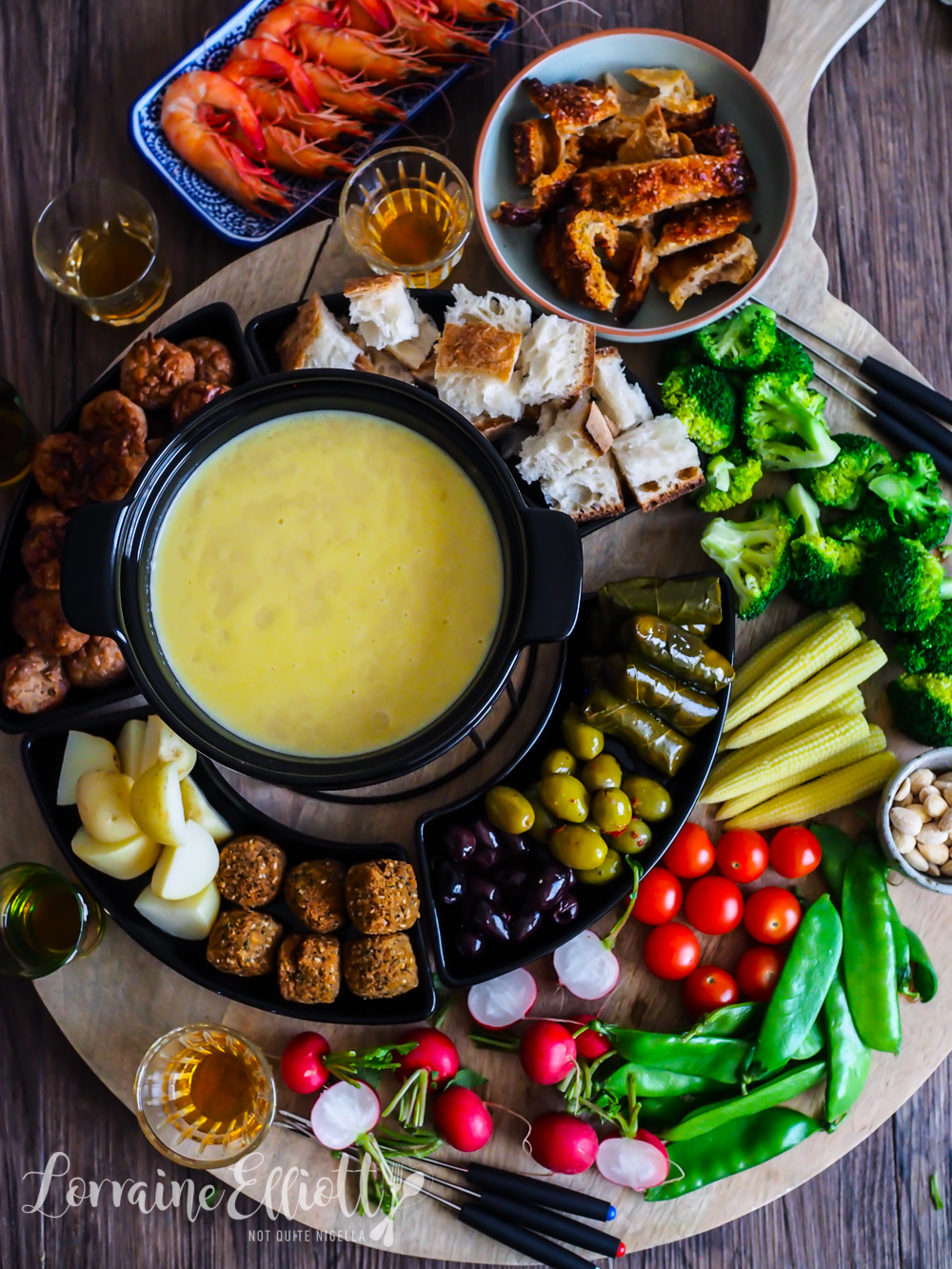 Nina and I talked about having a fondue night a while back - it was a particularly chilly day that prompted it. We both have an avowed love of a make up-less pyjama party after the last pyjama party we had. I borrowed a fondue pot from a friend Anna. We invited JY and Ben over because they got on so well with Nina and Garth at our Halloween party (friend matching is so important to make sure that everyone gets along and I am loathe to pair up people that don't like each other).

Fondue is as simple as you want to make it. There are so many variations of fondue with not only Swiss fondue but French and Italian using each country's own cheeses. Some add tomatoes, mushrooms or cream to their cheese mix too. We paired it with lots of vegetables and the fondue itself is a cinch - the hardest bit will be finding the cheese if you go for gruyere or emmenthal. I also bought most of the items from the deli cabinet as I had a hectic weekend. 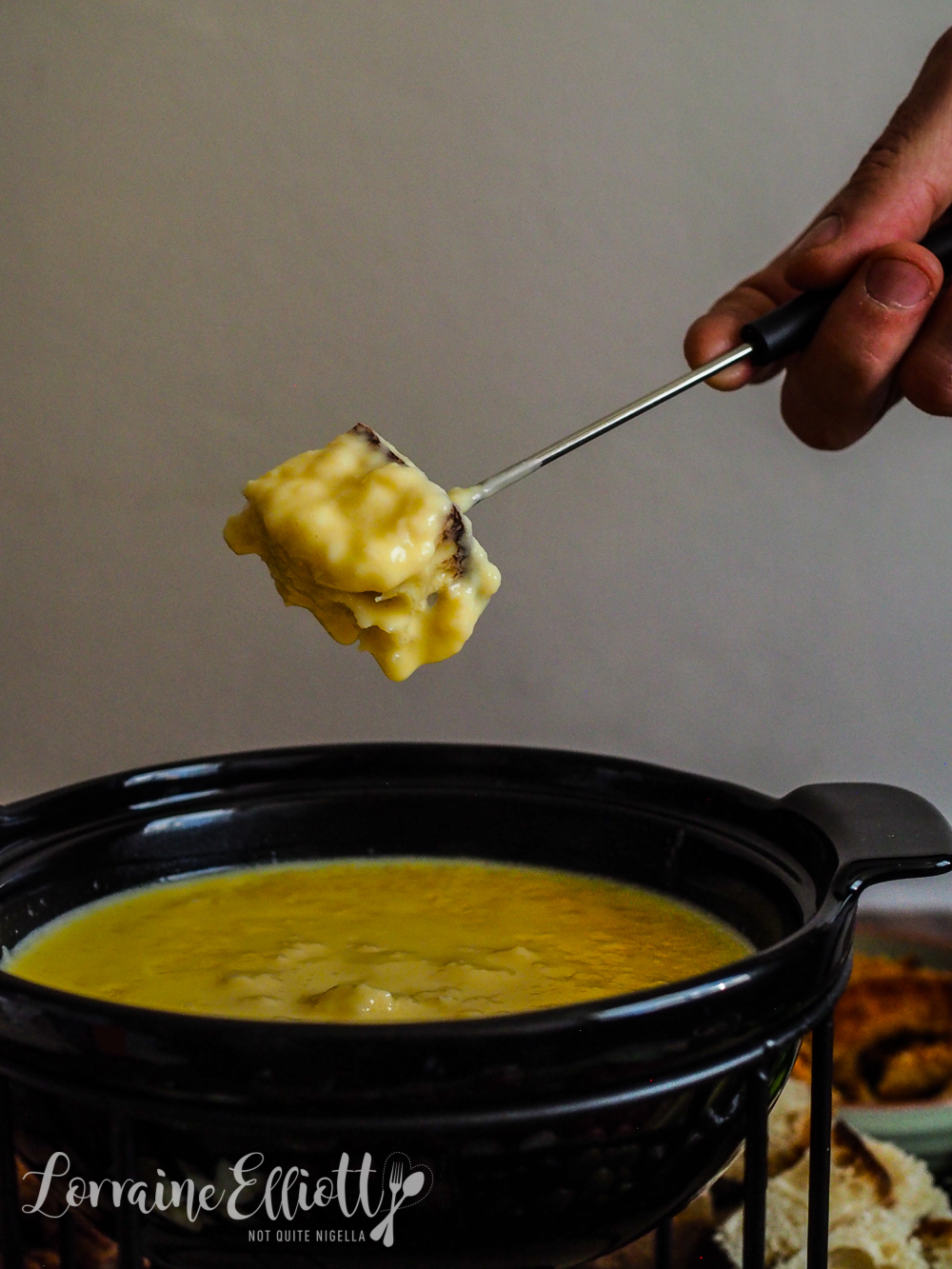 There are some rules to do with fondue, all of which I think we violated during our dinner party in various ways. These are:

If a man drops a piece of bread in the fondue they have to buy a round of drinks or a bottle of wine. If a woman does it they have to kiss someone the person on their left. Others say that you have to drink a shot of kirsch if you do!

If you've done a good job with the temperature, a little toasted round of cheese ("la religuese") will form at the bottom. That's one thing we did right although I didn't realise that this was a much fought over delicacy so I threw it away so that was a fail too! 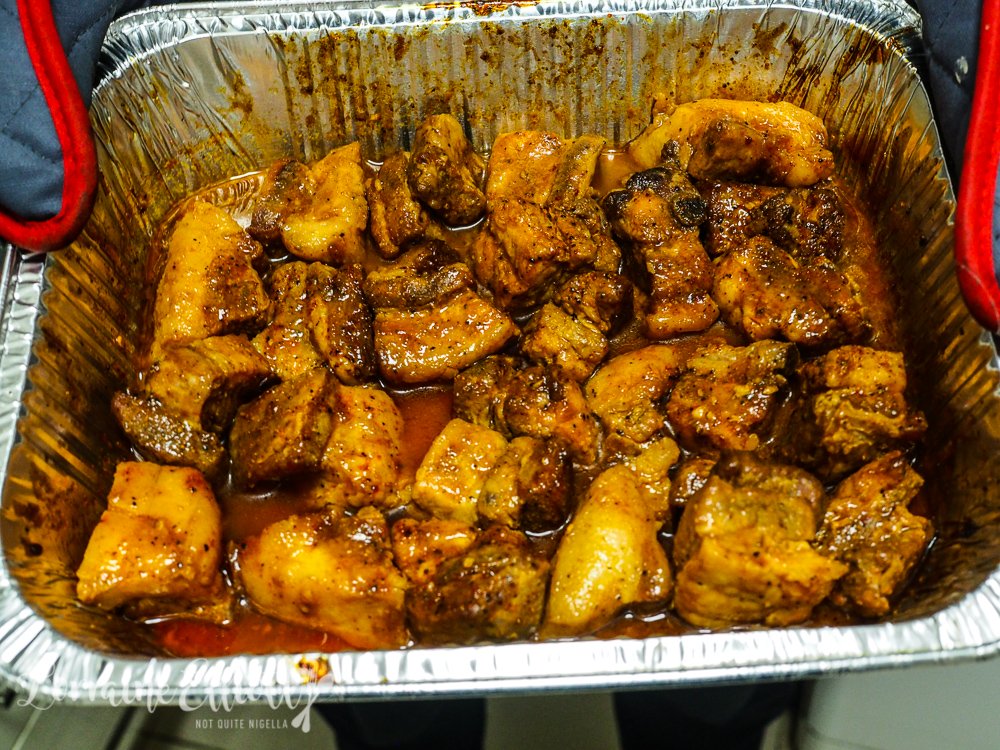 So while we effectively ignored most of those rules, we still loved the concept of the fondue. We crowded around the coffee table in our pyjamas and socks and dipped and drank. For us the key was a good vegetable selection but also tried our hand at meatballs and pork belly burnt ends (made by JY) also worked well as does prawns. The chocolate fondue dessert was even easier because we just served it with a range of fresh fruit, cookies and sweets. Nina and Garth brought the chocolate for the chocolate fondue and spiced rum for the hot buttered rum. 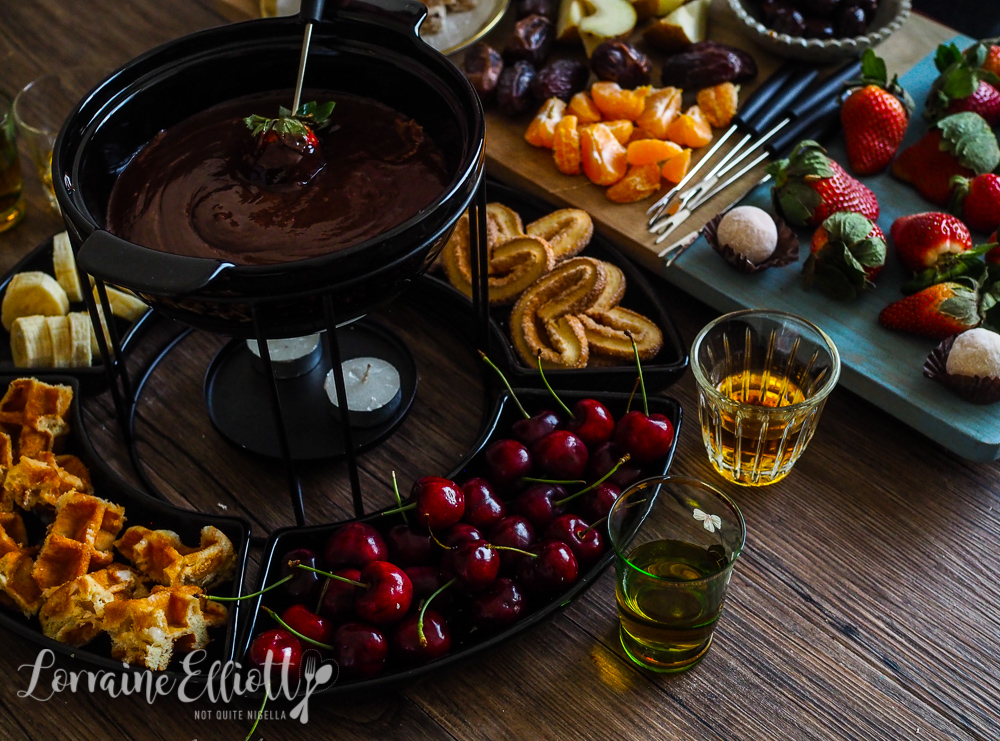 Which brings me to this utterly delicious buttered rum. I have to tell you how amazing hot buttered rum is. Currently, it stands as the thing Mr NQN has been the most enthusiastic about ever-EVER. Spices, brown sugar and honey are beaten with butter and the whole thing is mixed with spiced rum and hot water. It's rich and aromatic and quite addictive indeed, not to mention easy and can be made ahead of time. I also took to it with gusto. 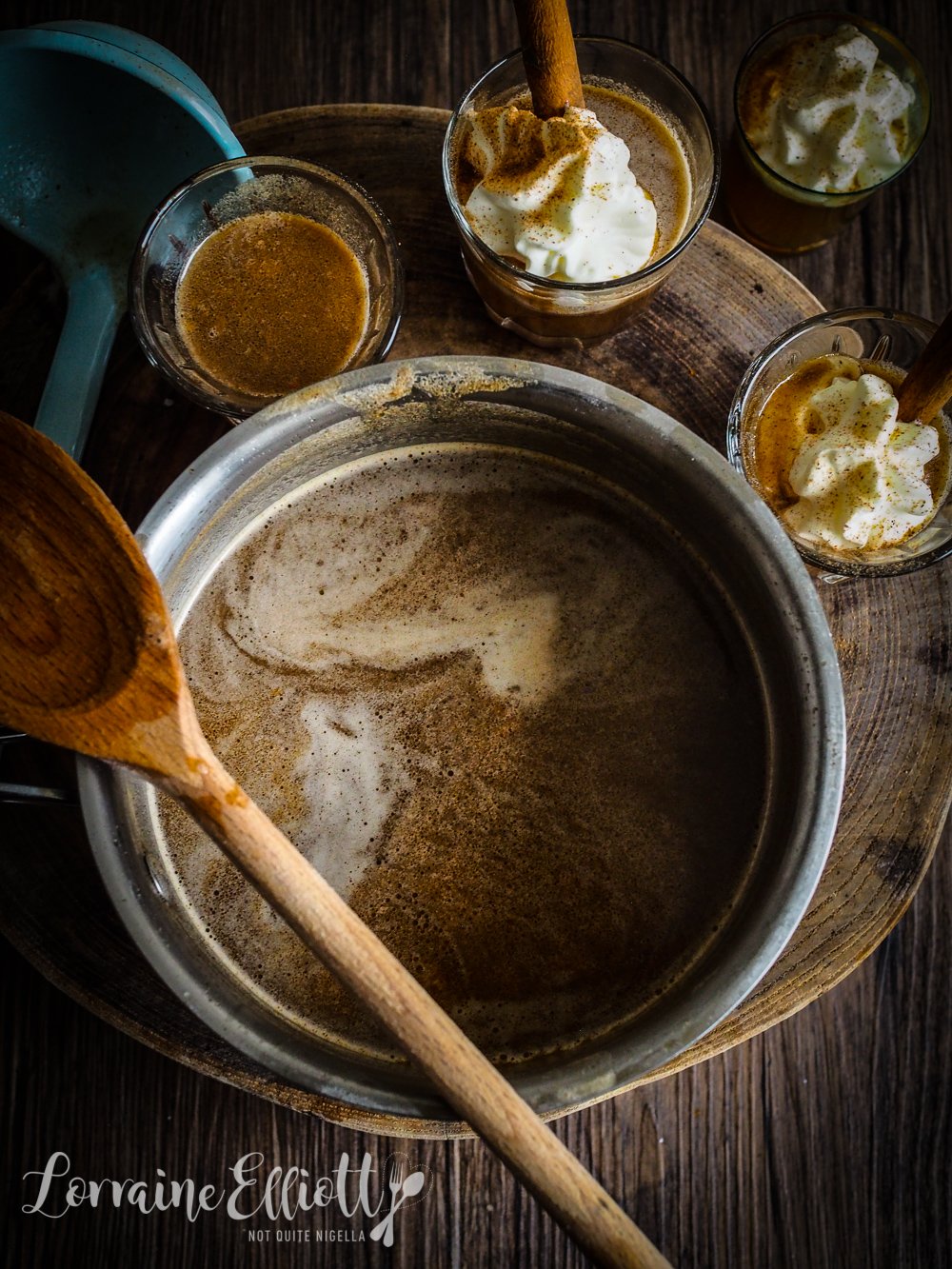 At this point I should also confess that during the night I couldn't really hold my alcohol especially after some ice cold cider and hot buttered rum. There is a reason why you're supposed to start your fondue with bread to line your stomach for the wine! 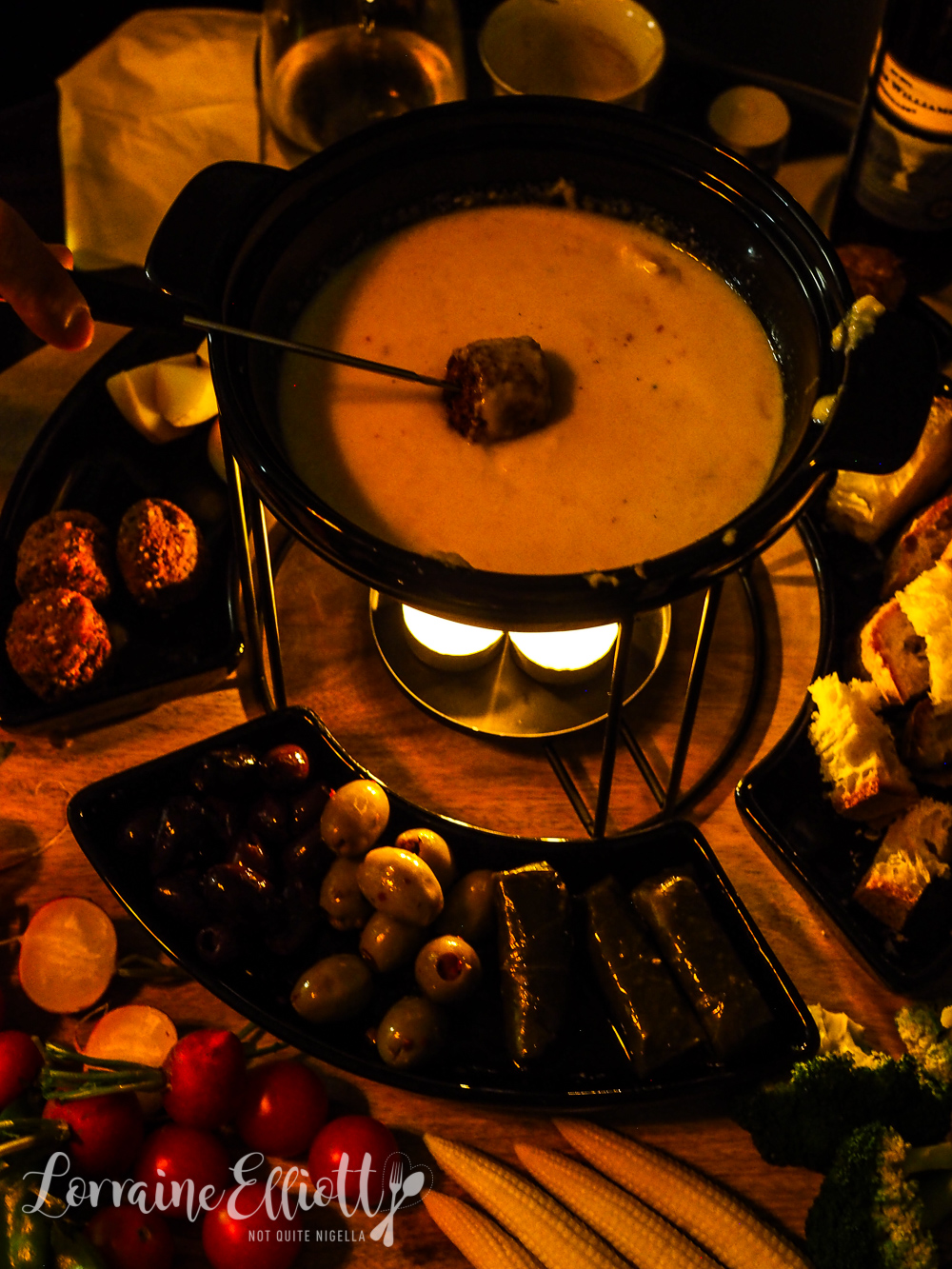 Nina and I started talking in accents that morphed into other accents. Nina and Garth dropped their bits of food into the pot. We also tipsy watched an episode of Sacha Baron Cohen's new series Who Is America (which is terrifying and funny and probably sobered us up a bit).

And the icing on the cake was all we needed to do once guests were left was roll into bed because we were wearing pyjamas!

So tell me Dear Reader, do you do careful friend matching? Do you prefer cheese or chocolate fondue? Have you ever had a pyjama party as an adult? 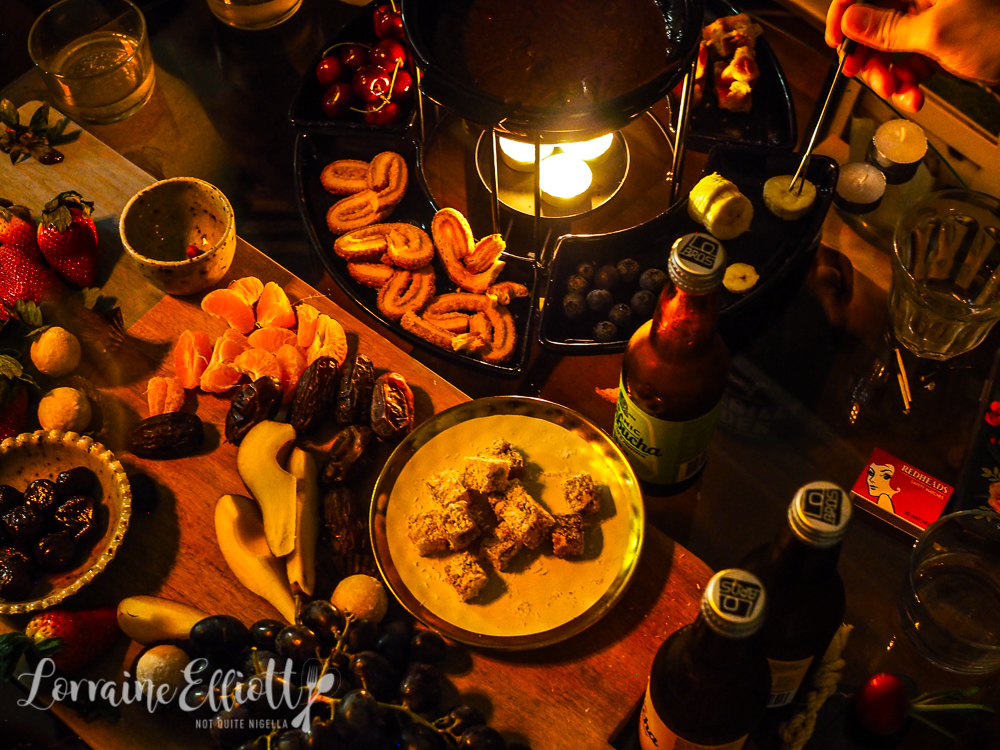 Preparation time: 10 minutes (fondue only, accompaniment prep time depends on what you choose to serve)

If you have trouble finding gruyere or emmenthal, you can also use Edam and Jarlsberg cheeses 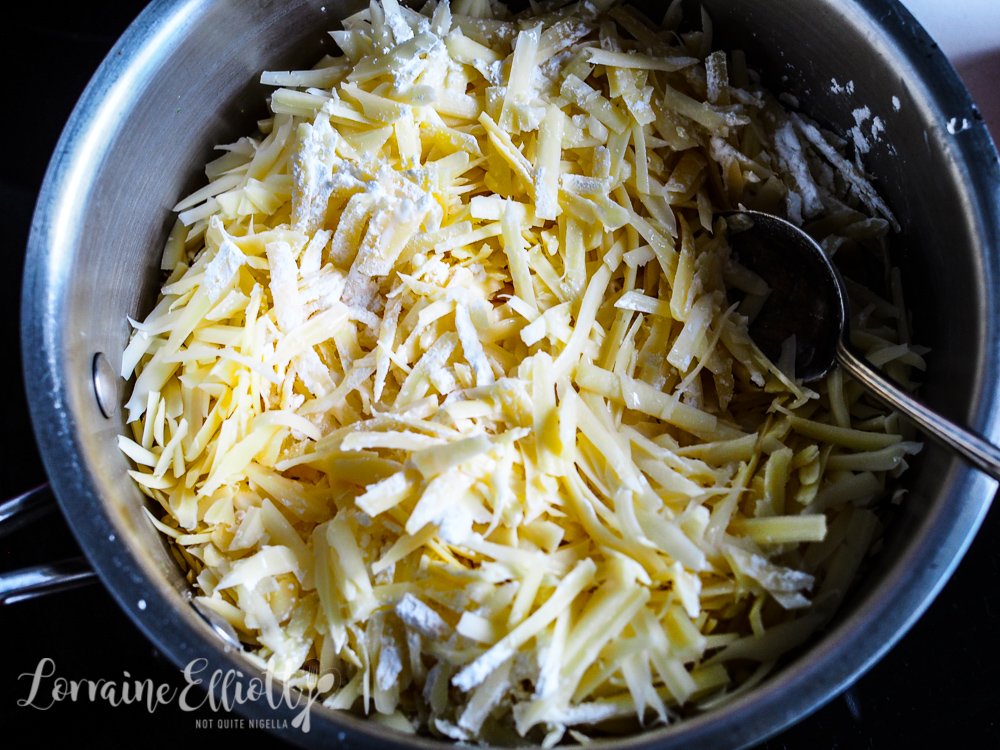 Step 1 - Rub the cut garlic clove cut side down around the fondue bowl. I also leave it in the bowl for extra flavour. Heat the wine or cider until boiling. Meanwhile toss the cornflour with the shredded cheeses. Add to the wine/cider and then melt the cheese on medium heat. Once melted, transfer to the fondue pot with tea lights or heat source. 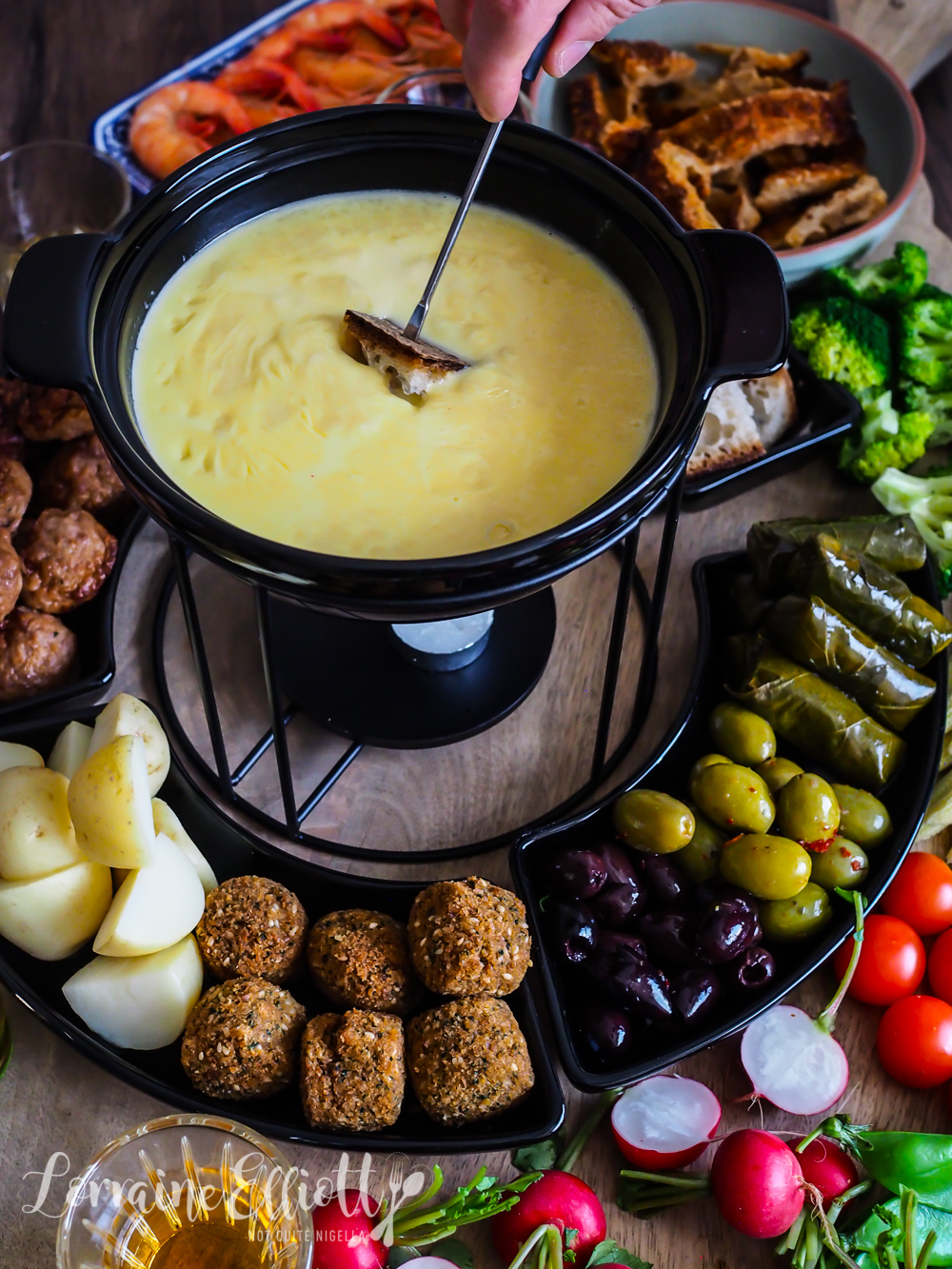 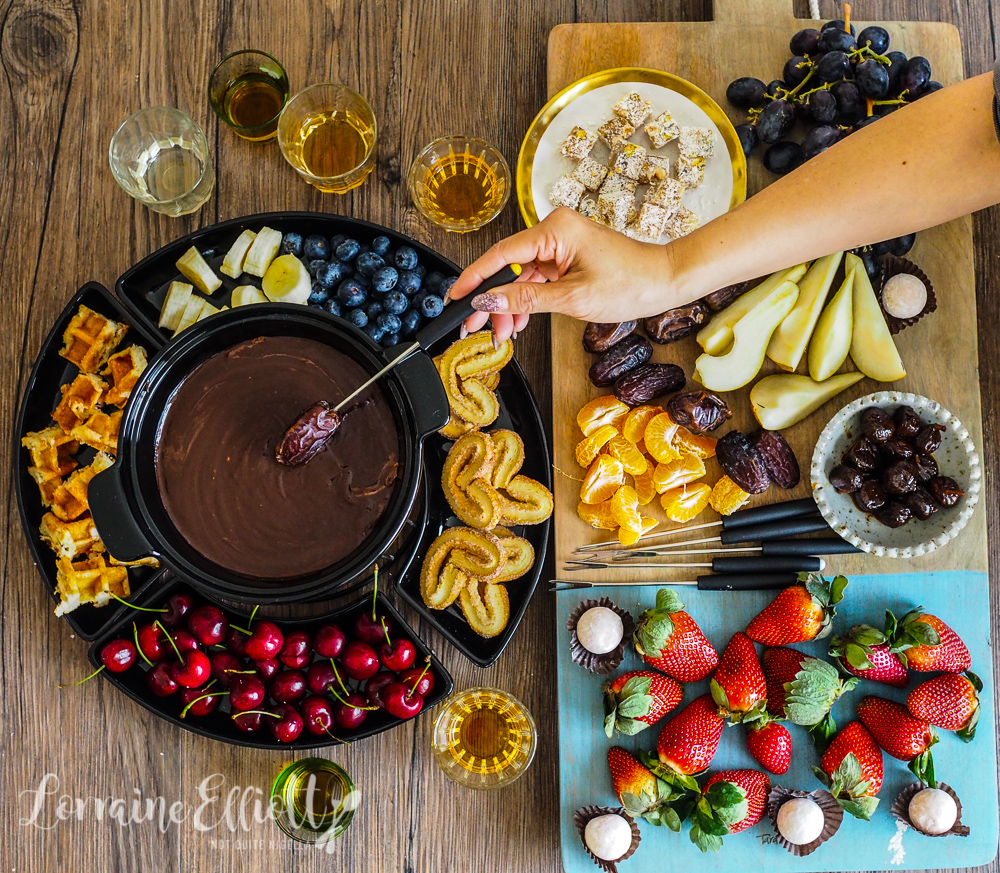 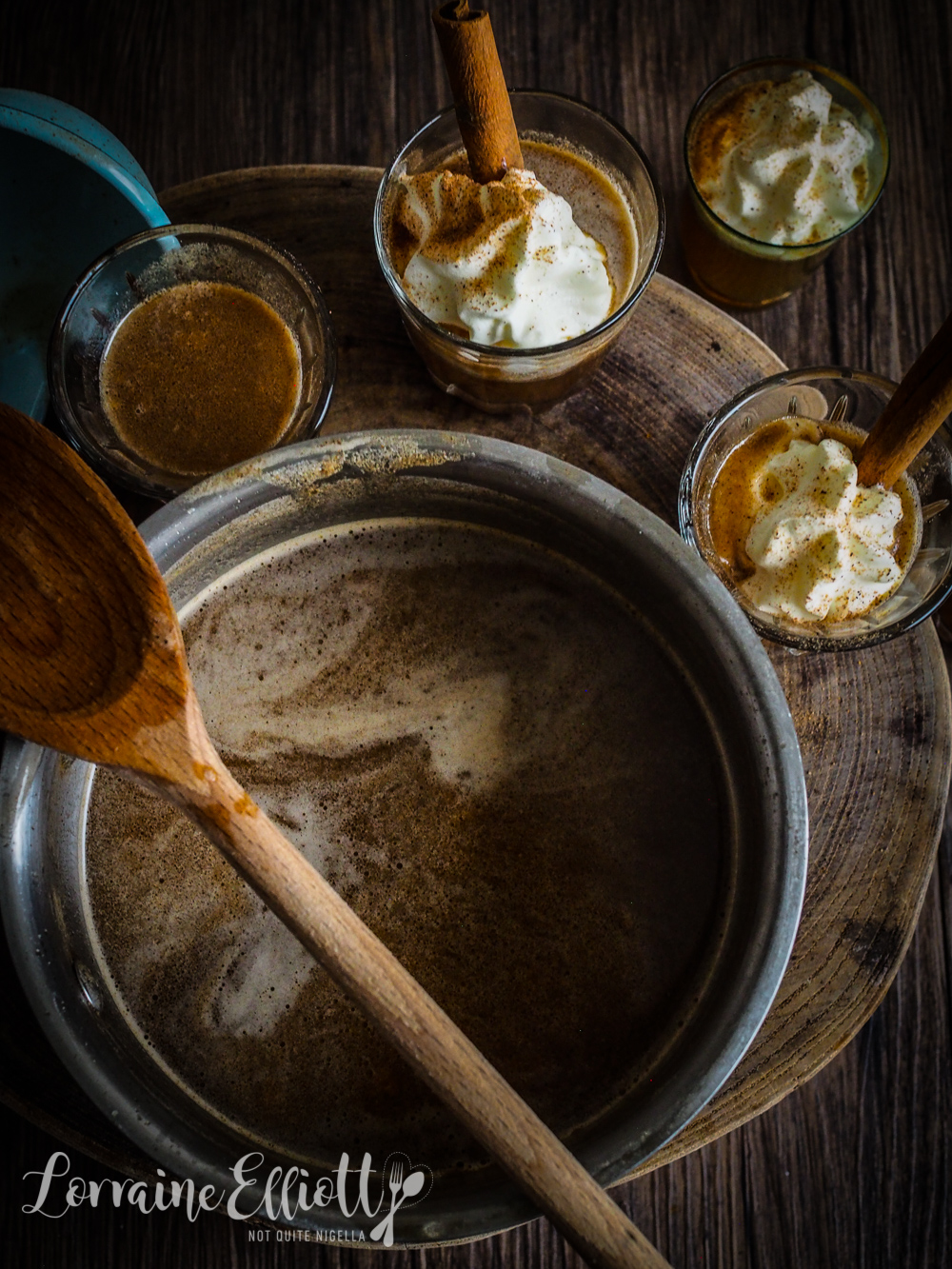 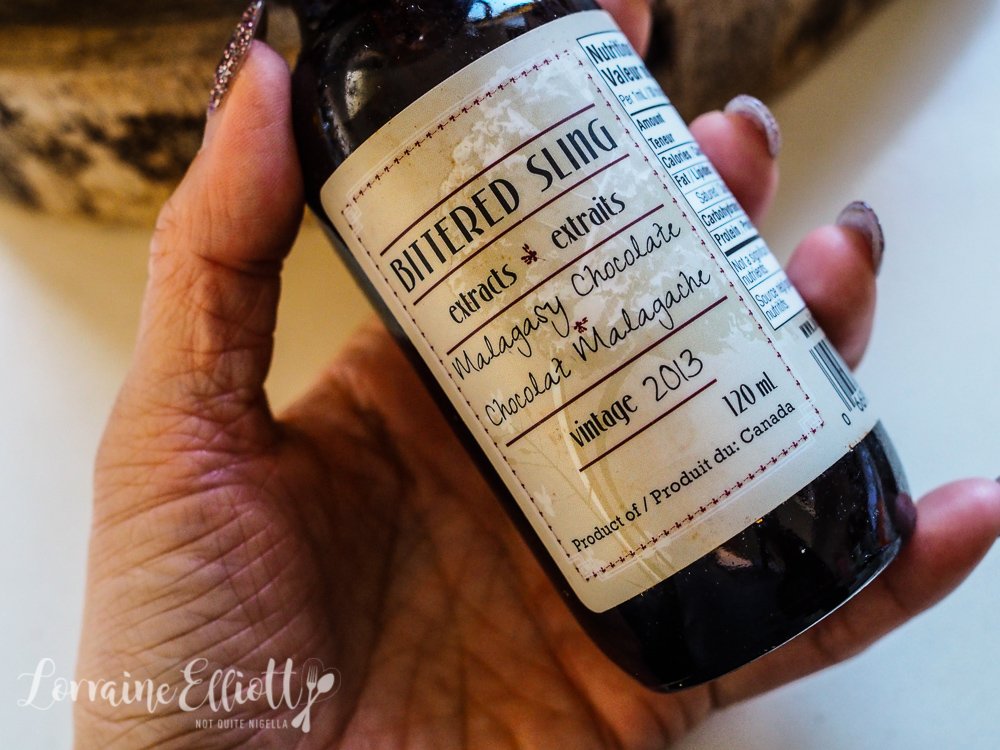 Step 1 - Beat the butter, brown sugar, honey, cinnamon, nutmeg, cardamom and cloves for 5 minutes. You can do this step ahead of time and it will keep, covered well in the fridge for 1-2 weeks. 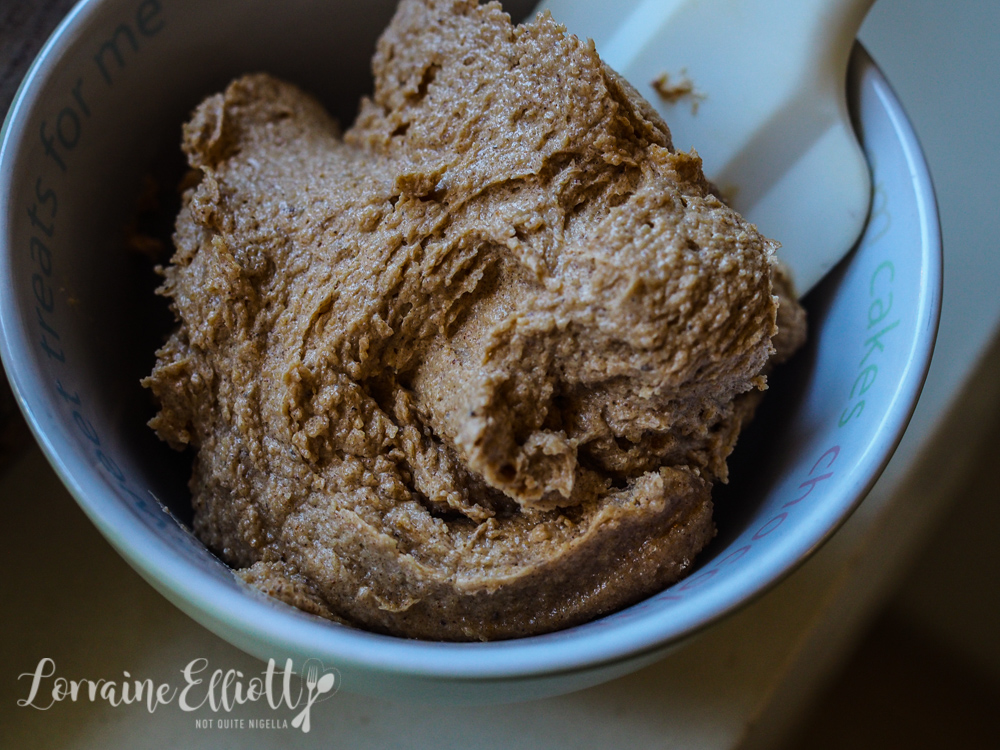 I had to really try to resist the spiced butter on its own...

Step 2 - When you want to serve it, mix the spiced butter in a jug with 2 cups boiling water, 1 cup spiced rum and chocolate bitters to taste and stir to dissolve. Serve immediately (you can top it with cream and spices too).