A Sure Rise For A Cheddar Bacon Souffle! 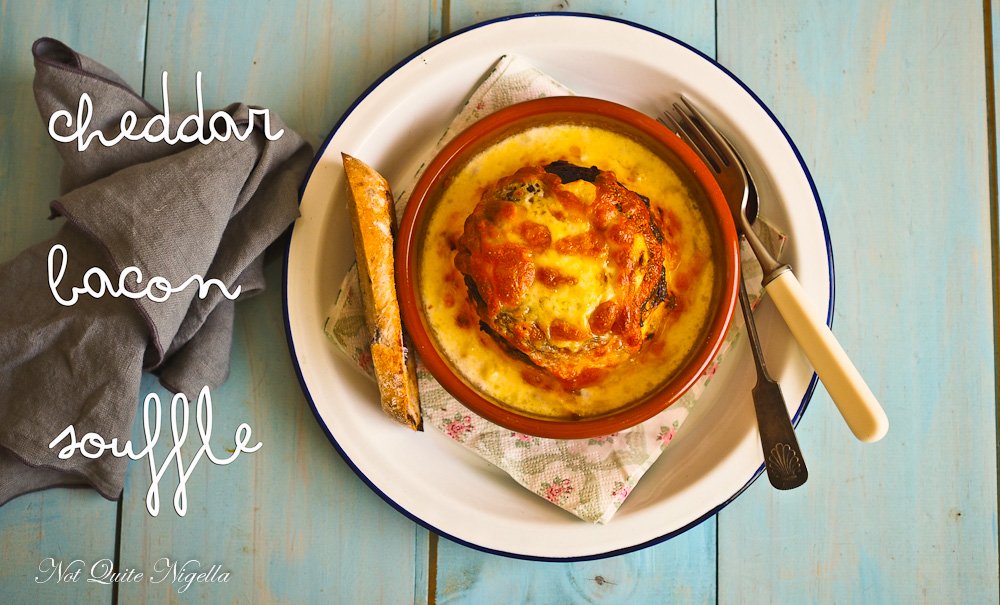 On a recent trip away I tried two cheese souffles. Eating them, in the chilly air of the Southern Highlands reawakened my love for this simple yet gloriously delectable treat. So much so that I wanted to recreate it as soon as I arrived home. Although souffles have quite a reputation, cheese souffles are perhaps one of the most forgiving items ever (unlike sweet souffles).

I was lucky enough to attend a dinner with Danièle Mazet-Delpeuch former chef of President Mitterand. She invented the twice cooked cheese souffle by accident. There was a delay at an important state dinner with Mitterand and Gorbachev and timings became confused. She thought that they were on their way when in fact they weren't and as a result, her souffle deflated in the wait.

She recalled the incident with humour and drama, "It was absolutely terrible ...I could have killed myself absolument! It was terrible, it was my honour, it was my dignity it was my everything! And I put the souffle back in the oven. Guess what? They raised perfectly. This night I learned first that souffle can be cooked two times and the second thing is that I would have the possibility to poison two Presidents! My life after would have been quite difficult... Viola!".

So for those of you that haven't tried making souffles before fear not because this one is a beauty and it isn't a diva! And once I place my spoon into the side of the light as air souffle and spooned up some of the bacon and cream I remembered how good it is to have this when you need something light, creamy and rich. 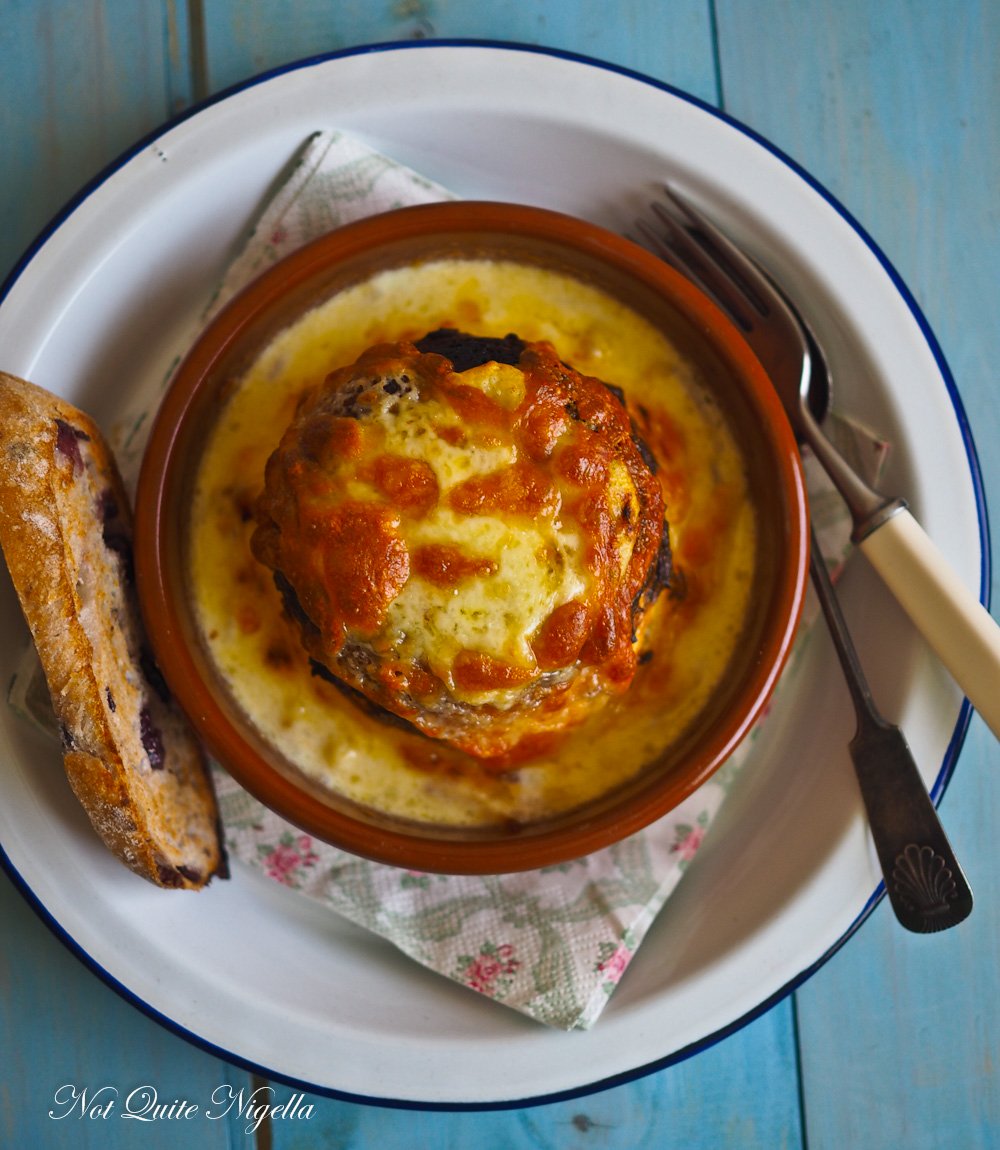 Usually when I have been away I crave something spicy, usually my mother's home cooking. When we arrived back home from the Southern Highlands that evening we stopped at my parents' house for dinner. My mother had made an eggplant dish which I adore that is really unlike other eggplant dishes (she has promised to share the recipe with me), some chicken wings and some of her awesome beef rendang.

My dad leaned over and sat up in his chair. "Do you know that the fruit shop is selling bananas at 50 cents a kilo?" he said excitedly. Given he rarely talks at dinner, this was clearly news that he was glad to share. The talk then turned to guavas as my mother's guava tree has started to produce some gorgeous fruit. "Guava is good for constipation you know!" my father added, perhaps buoyed by his earlier talk of bananas. "Your cousin has problems with constipation you know..." he added knowingly nodding his head.

"What? Why do you know that father? Did he tell you?" I asked him wondering about the conversations that my father has with people.

"I know things," he said smiling to himself. Honestly I don't know what he meant by that...

So tell me Dear Reader, have you tried making a souffle? Is there a dish that makes you nervous? And do you ever discuss bodily functions? 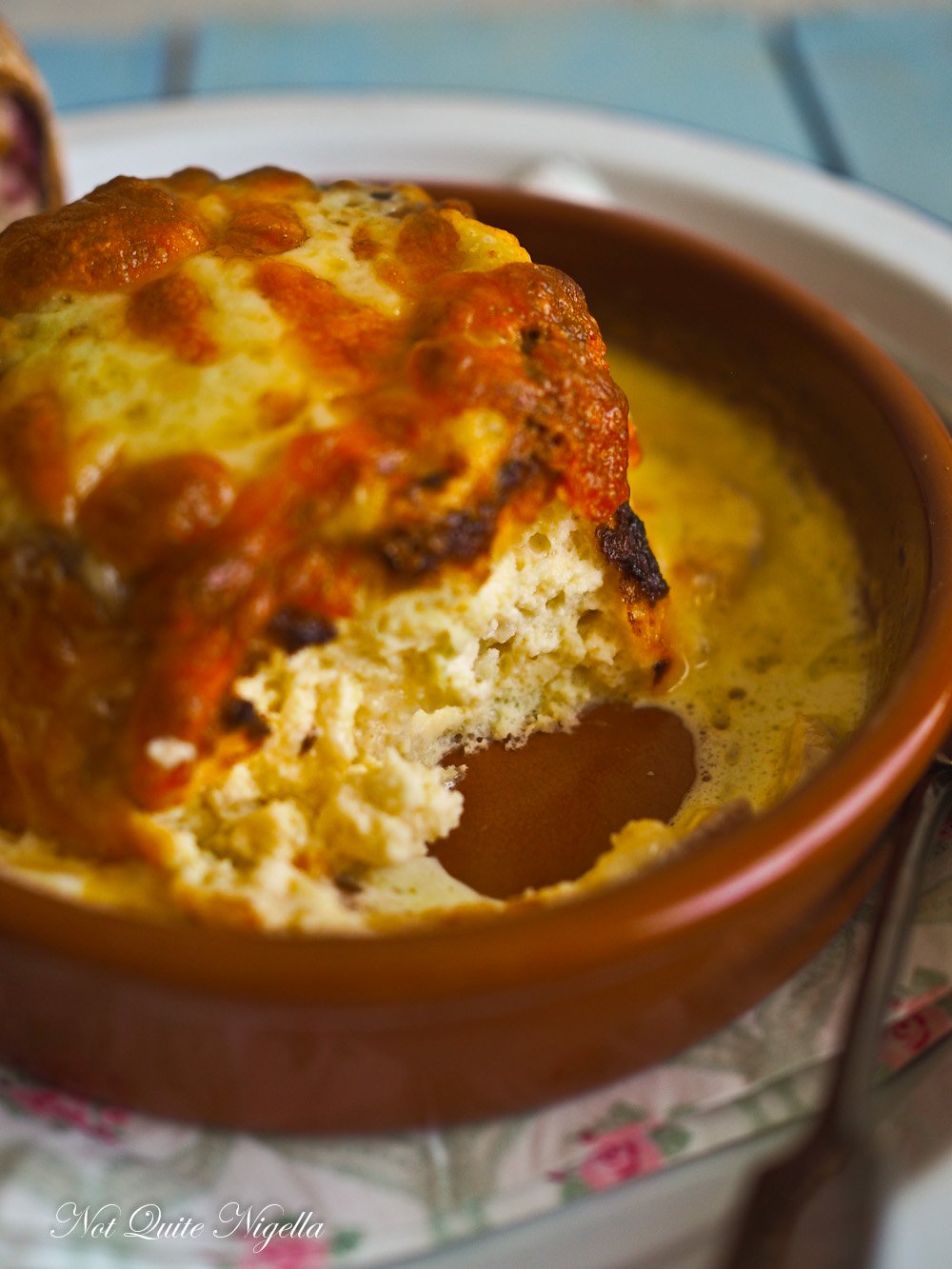 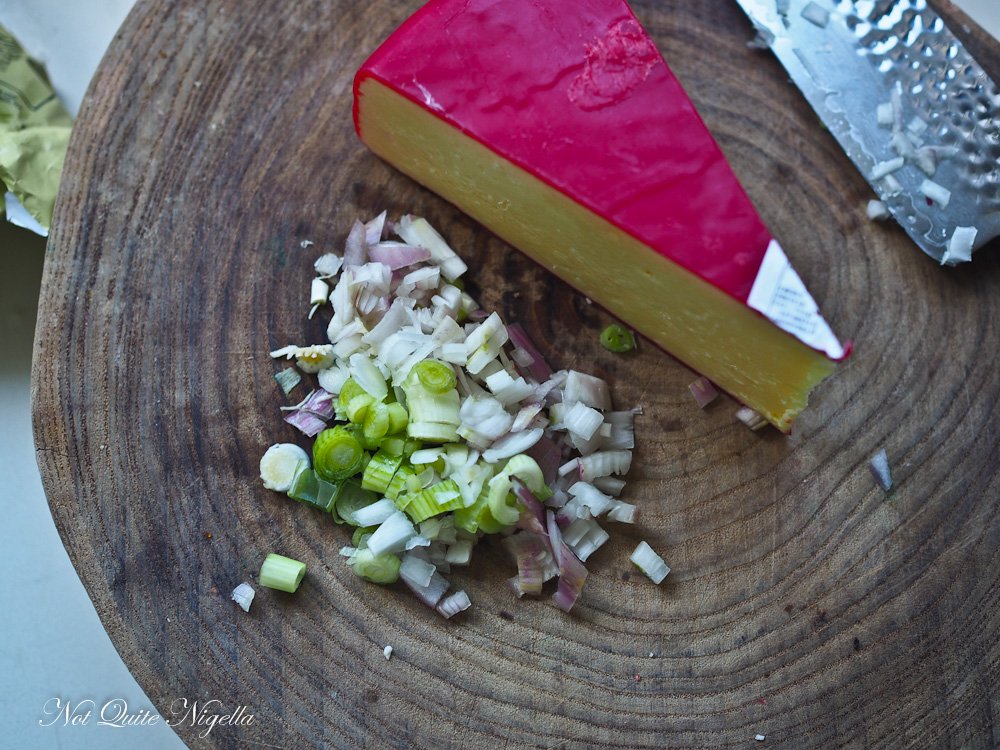 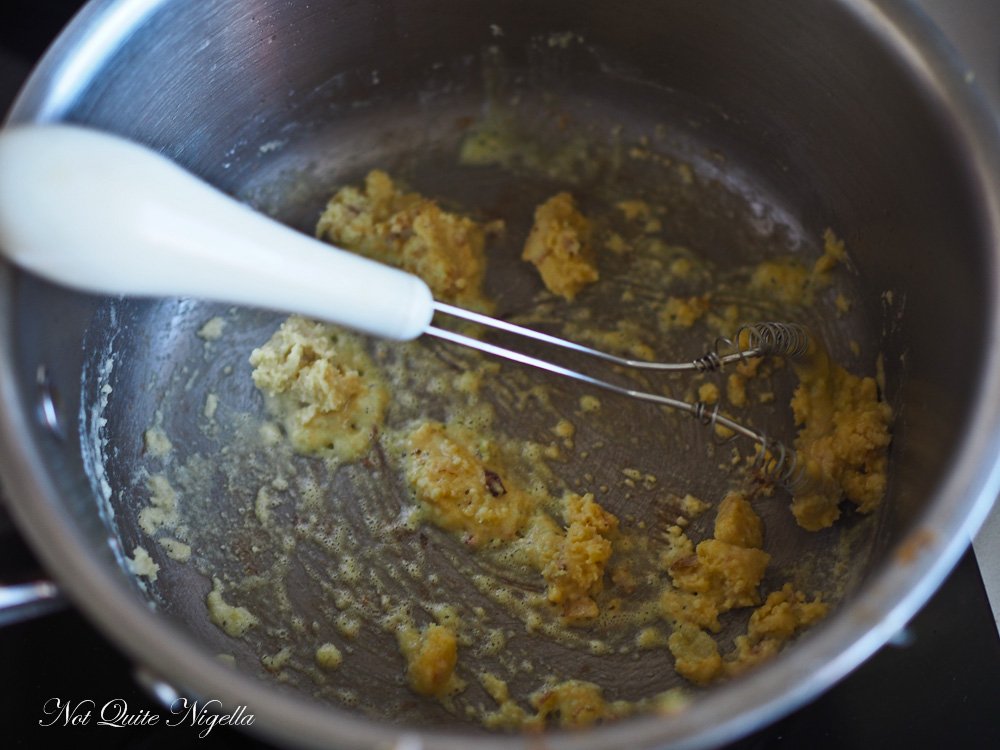 Step 2 - Place 1.5 tablespoons of butter in a saucepan and melt and saute the onion until translucent. Remove from the pan. Add the other 1.5 tablespoons of butter and then the flour and stir so that it doesn't stick and the flour mixture cooks for a minute. Switch to a whisk and add the hot milk in small batches. I first add a little and let is absorb by whisking. Keep adding it slowly so that it forms a thick, creamy roux. Remove from the heat. Stir in the mustard, egg yolks and cheese. 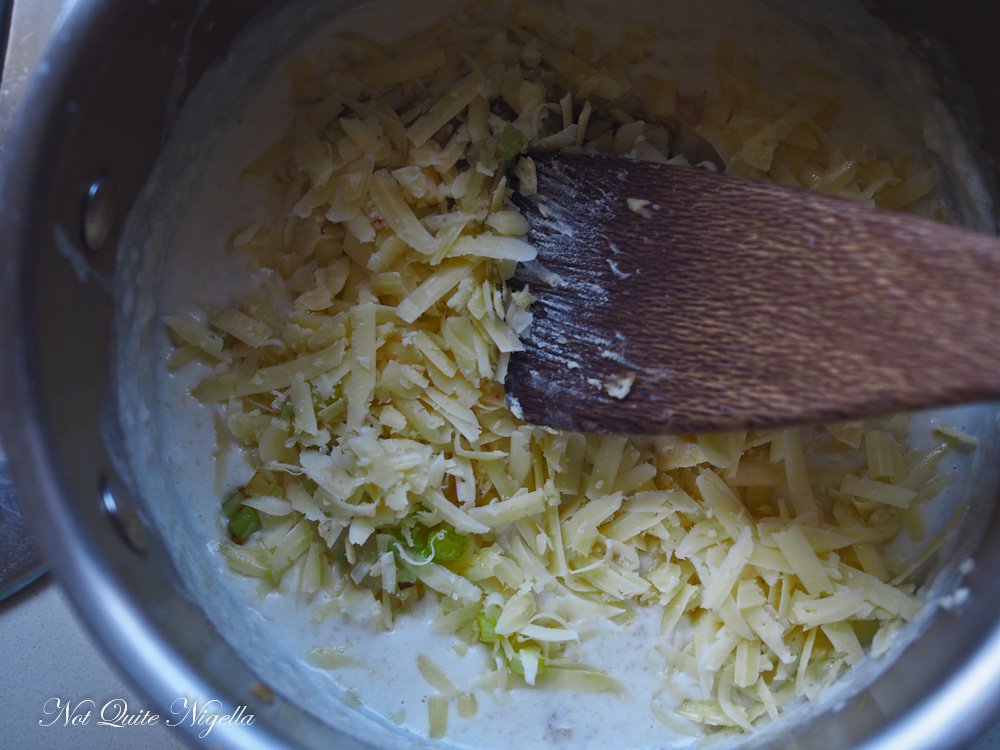 Step 3 - Whisk the egg whites until stiff peaks form. Gently fold one third of the egg white mixture into the roux adding the whites in three lots until completely combined. Spoon into the ramekins and bake for 25 minutes. Use a palette knife along the edges and allow them to come out-they should do so easily. At this point you can cool them completely and then freeze them for up to 2 months before proceeding with the next step. If you are using them from frozen do not microwave them but let them come to temperature on the bench or overnight in the fridge. 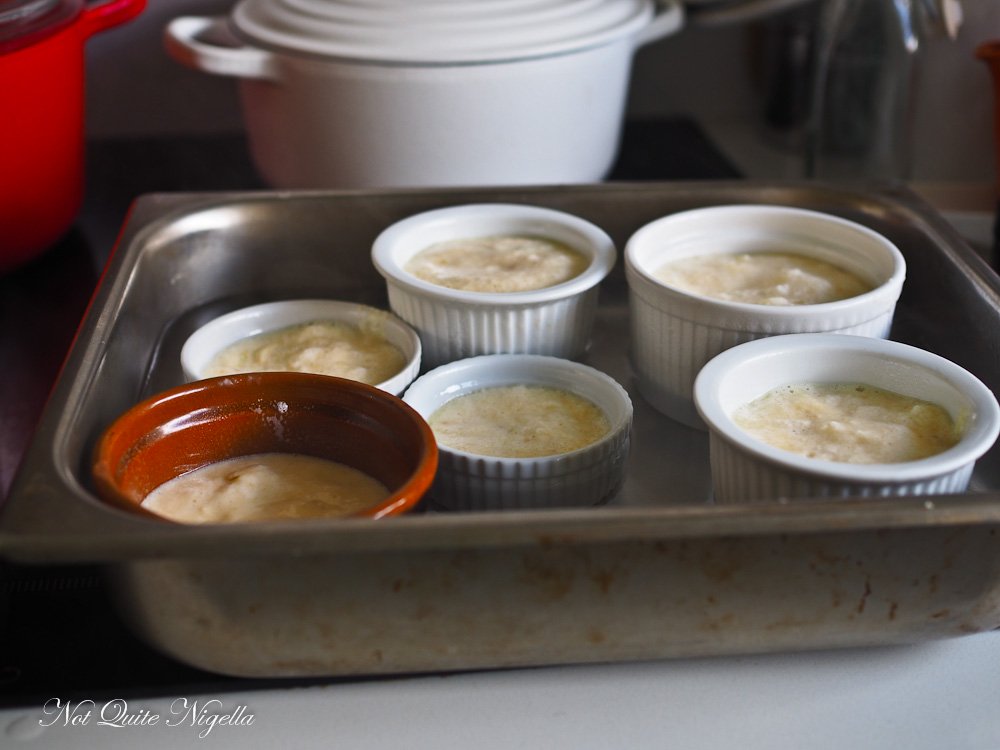 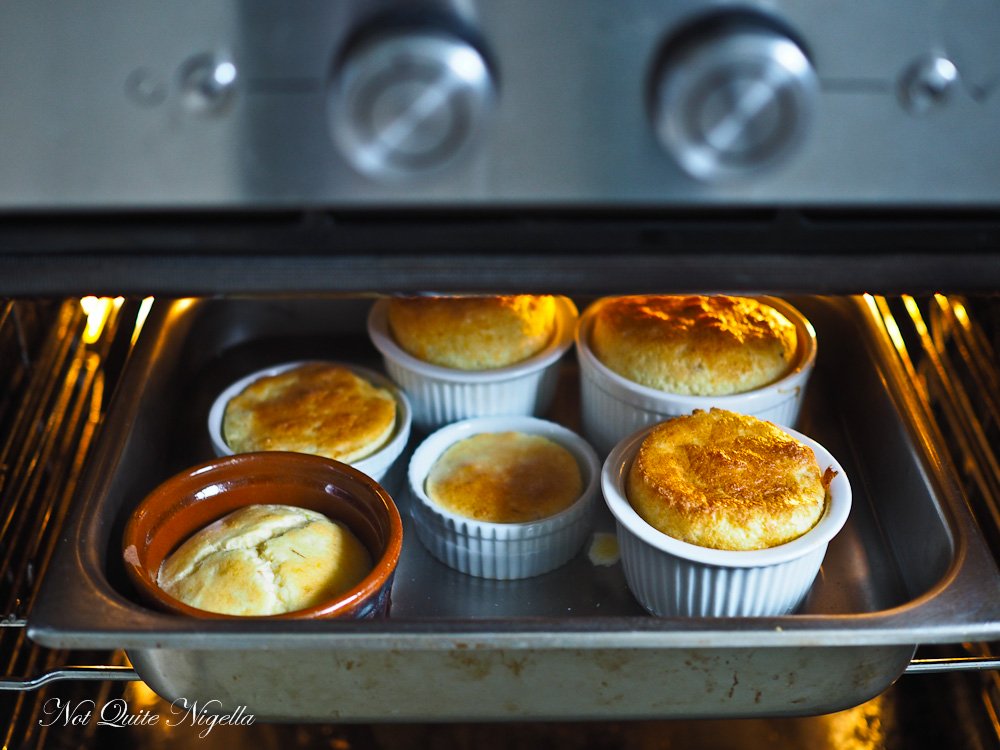 Step 4 - Place them on an overproof single serve dish. Place 3-4 tablespoons of cream on top of each and one bacon rasher's worth of pieces around each one. Bake for 15 minutes. Then add cheese on top and place under hot grill to brown. 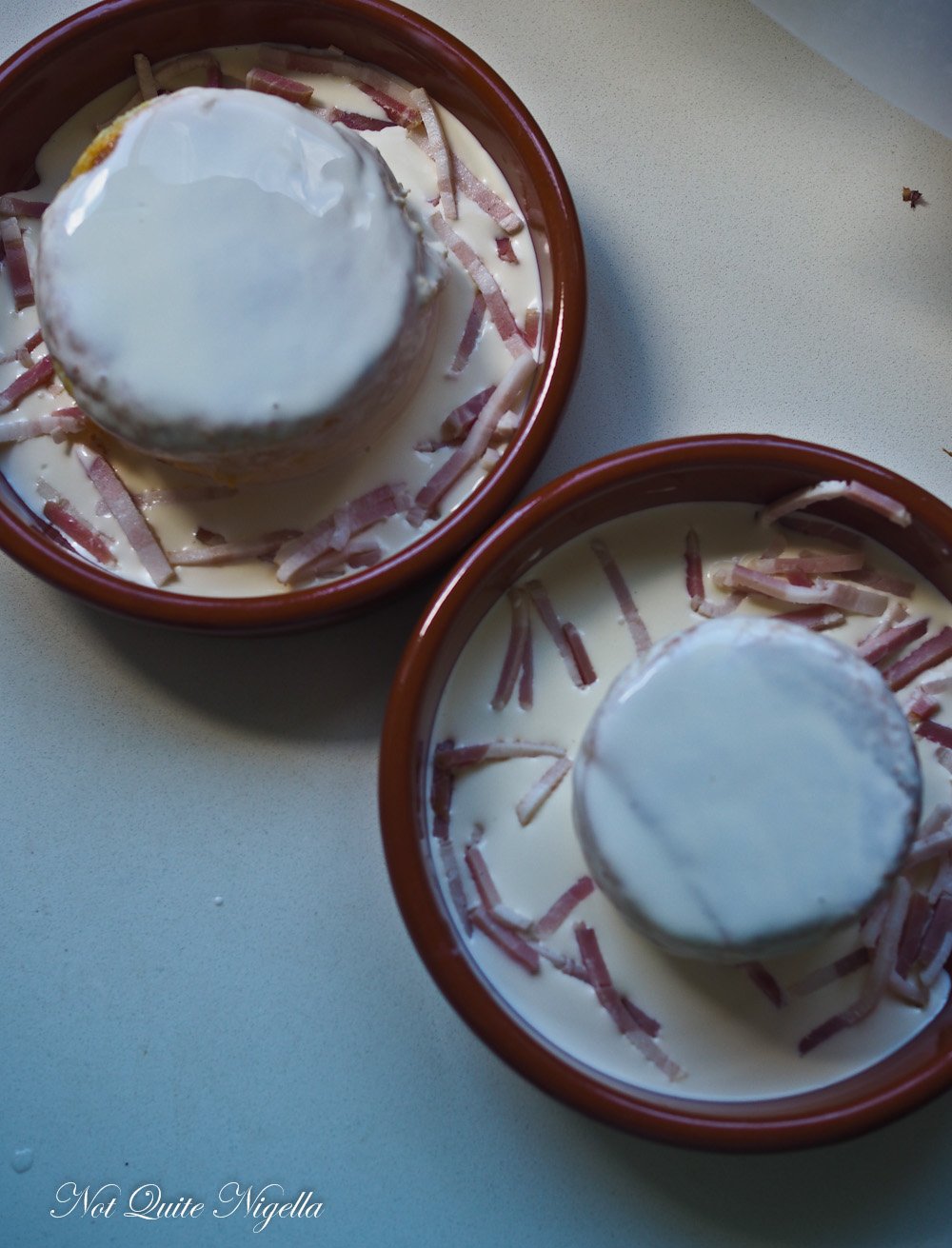 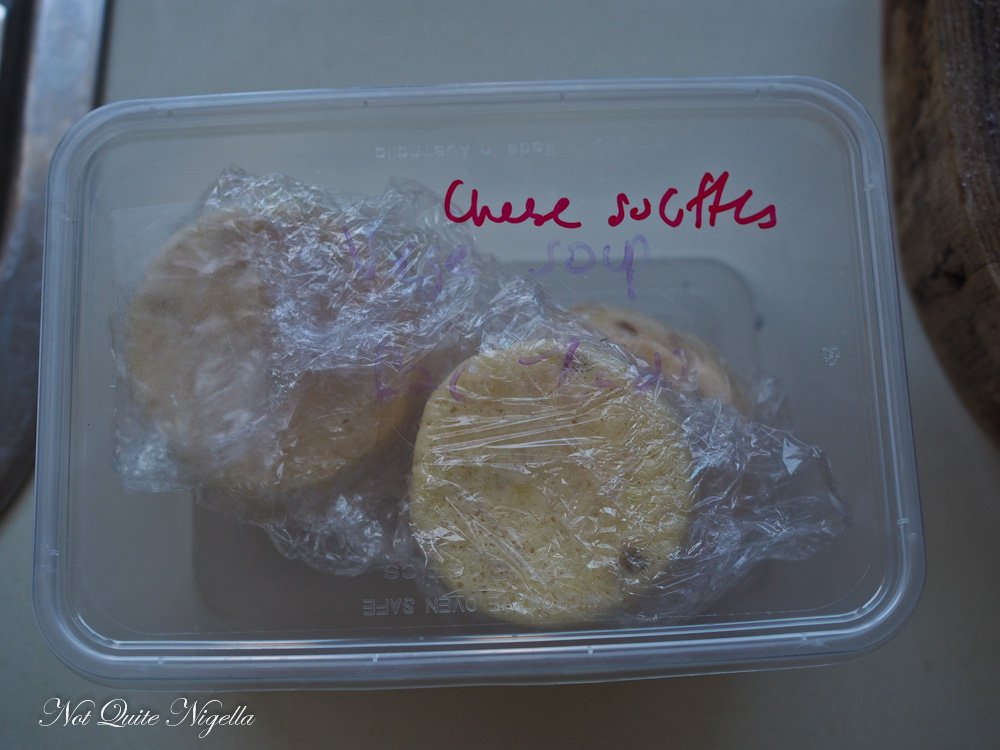