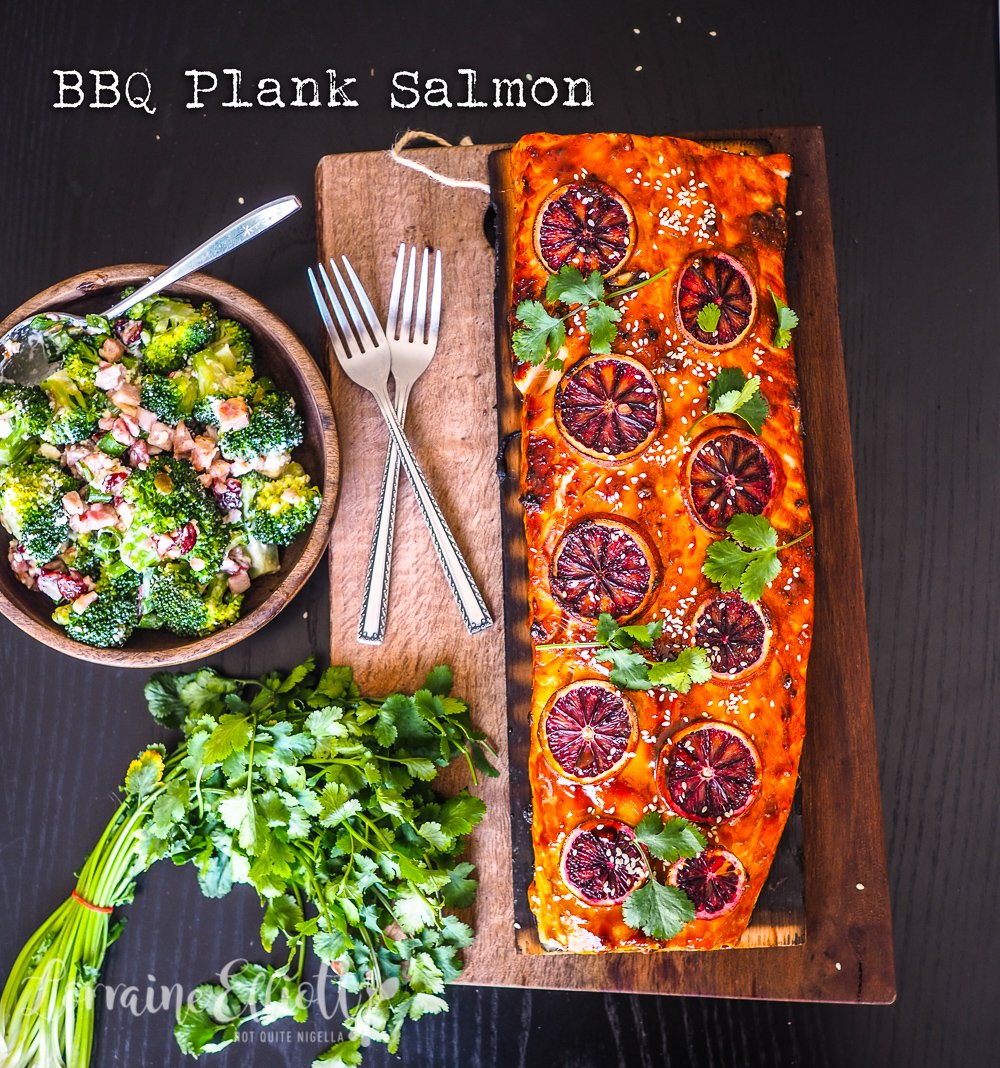 Fire up the barbecue for a fabulous Father's Day treat! Barbecue plank salmon is one of the easiest and most fun ways to serve salmon. You simply grill salmon on a cedar plank which infuses the salmon with a wonderful flavour. It is glazed with a gorgeous white miso, sesame, ginger glaze and then paired with a broccoli, bacon, cranberry and feta salad for a Father's Day to remember!

Whenever it comes around to Father's Day I often scratch my head wondering what to do. While my mother is very typical of mothers (loves flowers, chocolates and gifts), my father is untypical of a lot of dads or at least the stereotype of them. While places roll out specials with steaks, beer or whisky my dad travels his own path. He juices, is obsessed with turmeric and cinnamon and eschews red meat and alcohol. 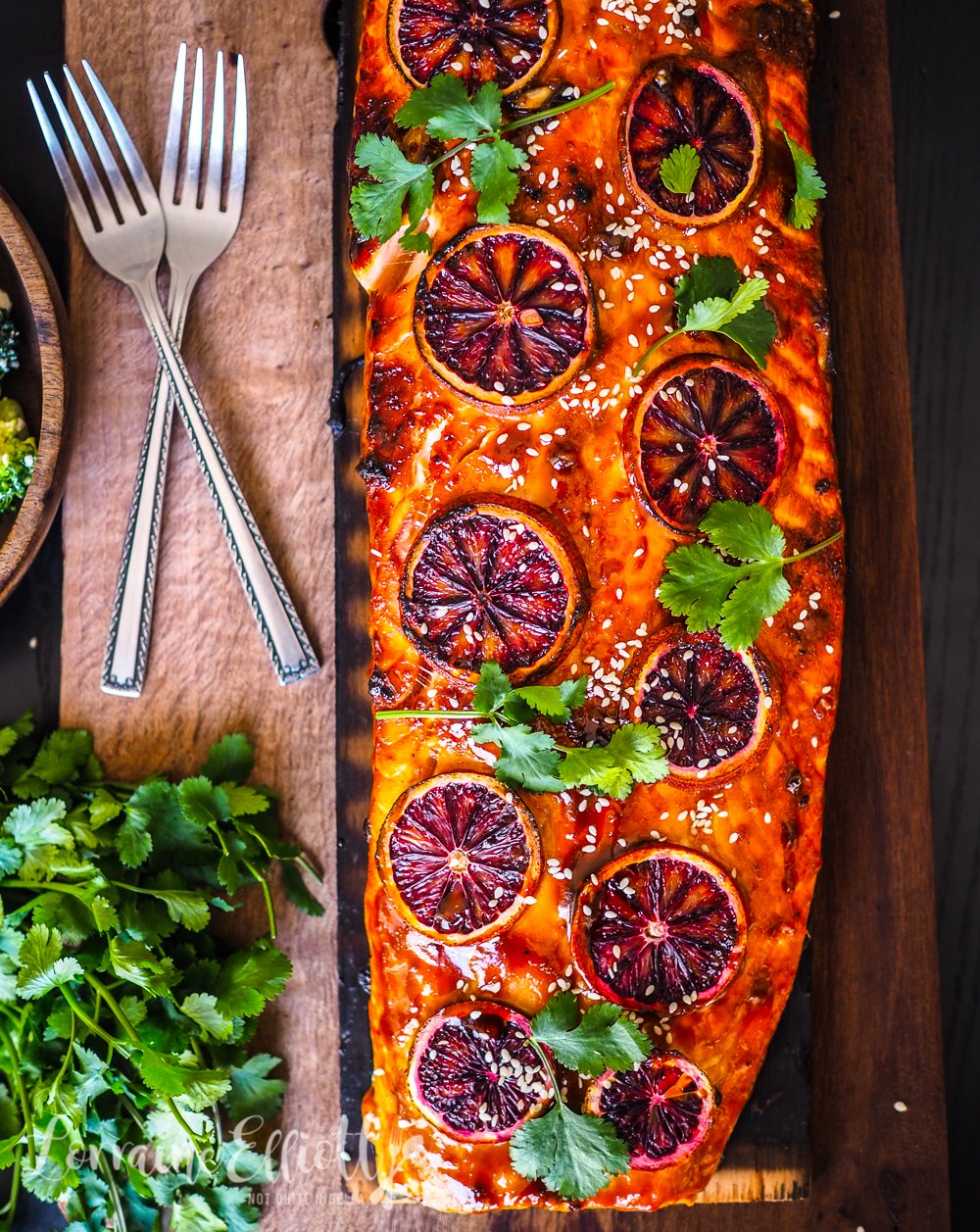 But this barbecue cedar plank salmon is where both types of dads meet. My father loves fish and salmon because they are healthy and everyone seems to love salmon. And I wanted to give cedar plank grilling a try because I had heard that it makes salmon taste incredible. The side salad was also healthy-ish-lots of broccoli but there was also bacon, feta and mayonnaise because really, life is for living no? 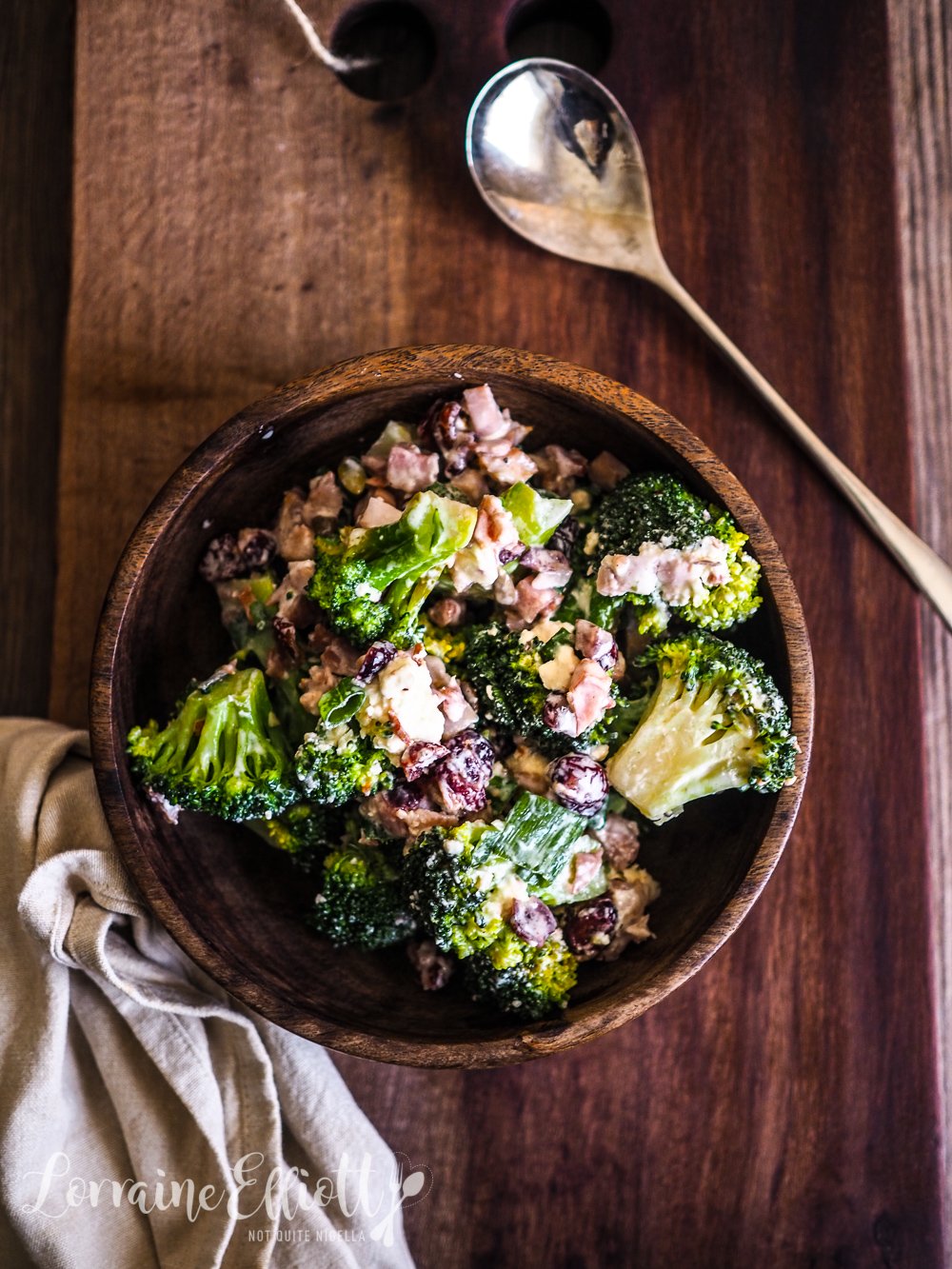 Grilling this salmon was a family affair. I don't know about you Dear Reader but barbecues scare me slightly. All that heat and gas or coals and while I feel at home in a kitchen the barbecue is another matter. And my parents are the same. They bought a barbecue envisaging dreams of Australian style entertaining forgetting that they hate the outdoors and would rather eat inside and it has laid mostly dormant, used four times in total over 29 years (twice by me). 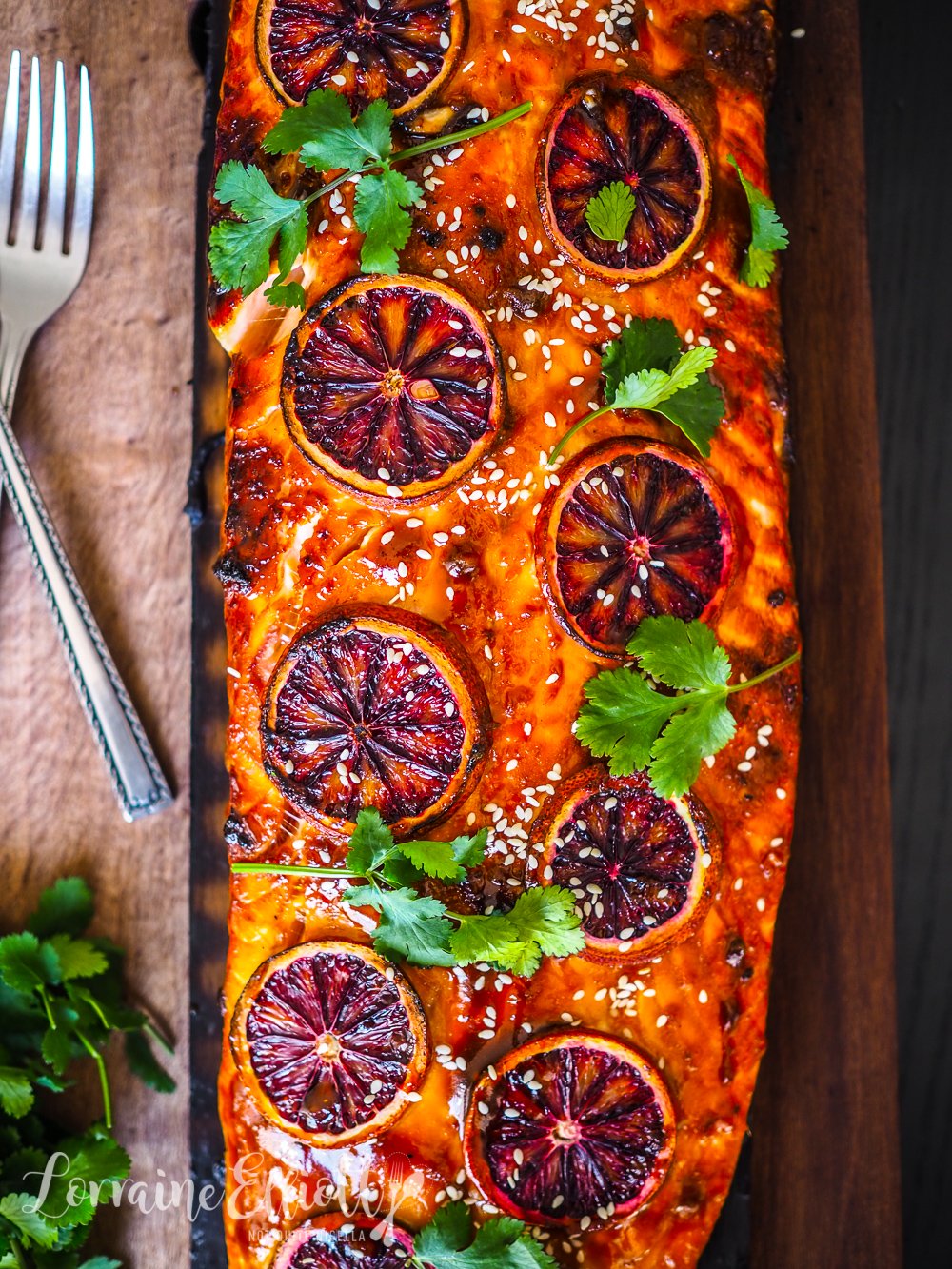 Making this salmon is actually really simple for people who know their barbecue well although full disclosure, this required me and both my parents. It has been over 5 years since the barbecue was last used. The gas tank was empty and there was a lot of drama about getting that filled and connected. Eventually after many hours of tinkering my father fixed it.

I arrived the next day ready to barbecue. "It's too windy to light it, we should do it indoors," said my father. "I don't think that's a good idea with gas," I said. But he was insistent that it wouldn't light so we ended up with the barbecue being half in and half out of their basement before I startled. 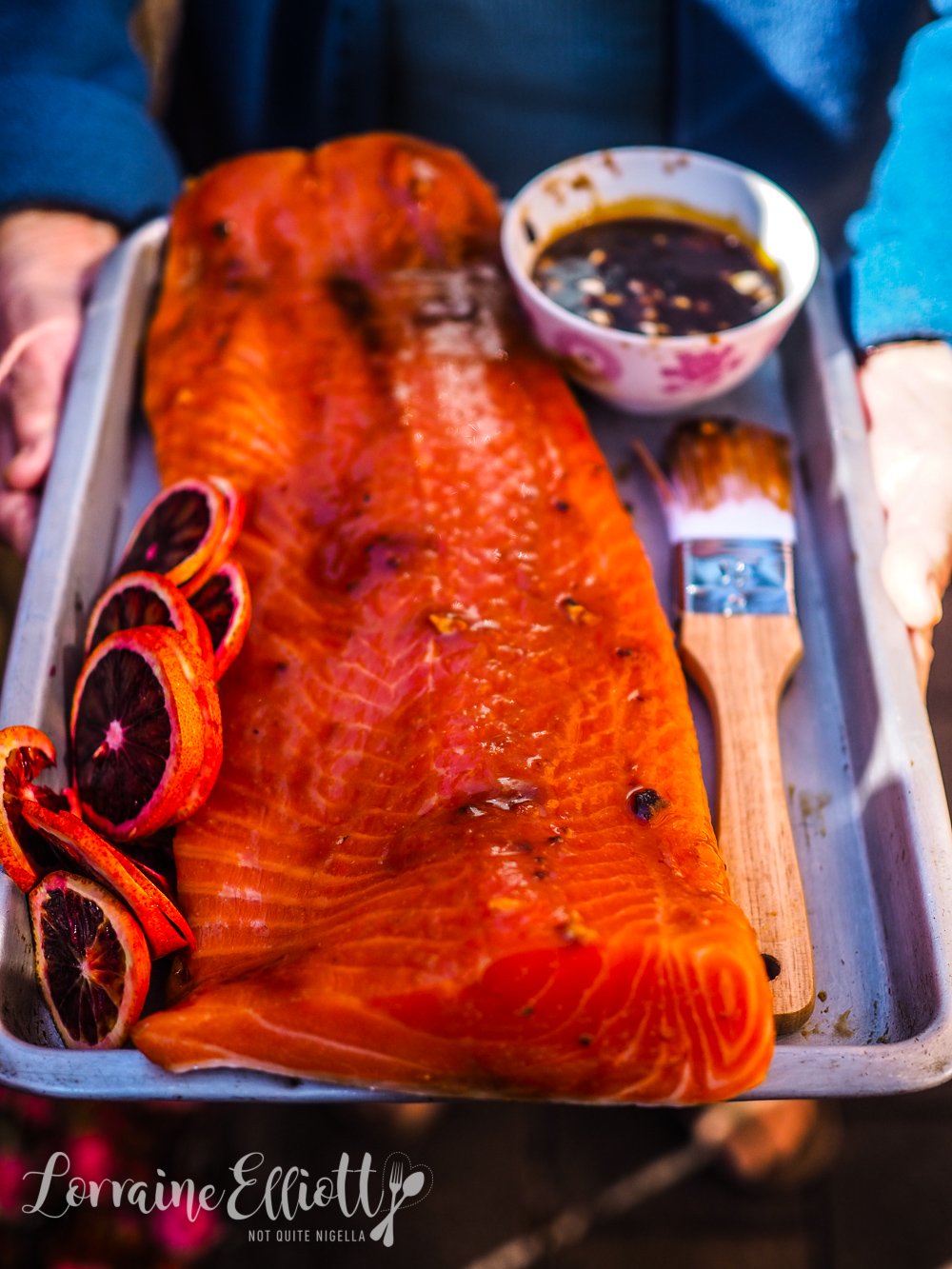 "Can you smell gas?" I asked. "No, nothing," they said but it was definitely gas so we moved the barbecue outside. "I'll get the fire blanket shall I?" said my mother and quickly grabbed it. 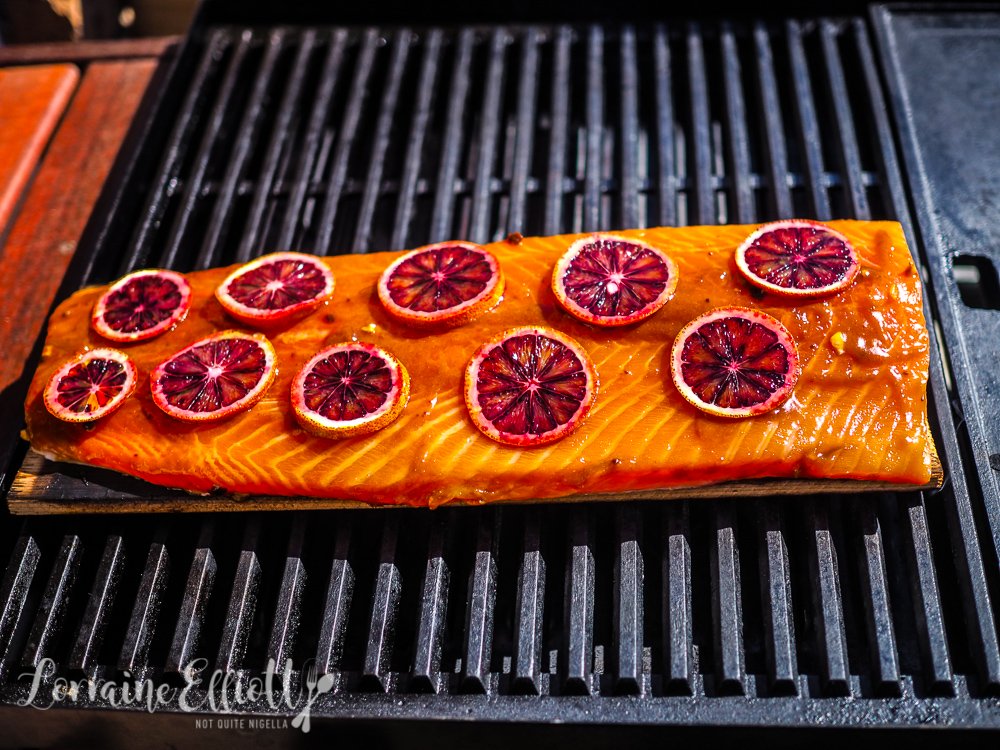 The barbecue took a while to light but once we did, it was smooth sailing. In fact the salmon cooked so quickly (and it continues cooking if you leave it on the plank) that we were tasting it within no time. It was a total of 10 minutes on the barbecue and then 5 minutes under a hot grill to caramelise the top because their barbecue doesn't have a lid. The salmon? It was heavenly. I worried that I had overcooked it but the salmon was super luscious and flavoursome. It was absolutely worth the trouble we had gone to. It also feeds a crowd so a salmon this size is great for entertaining. 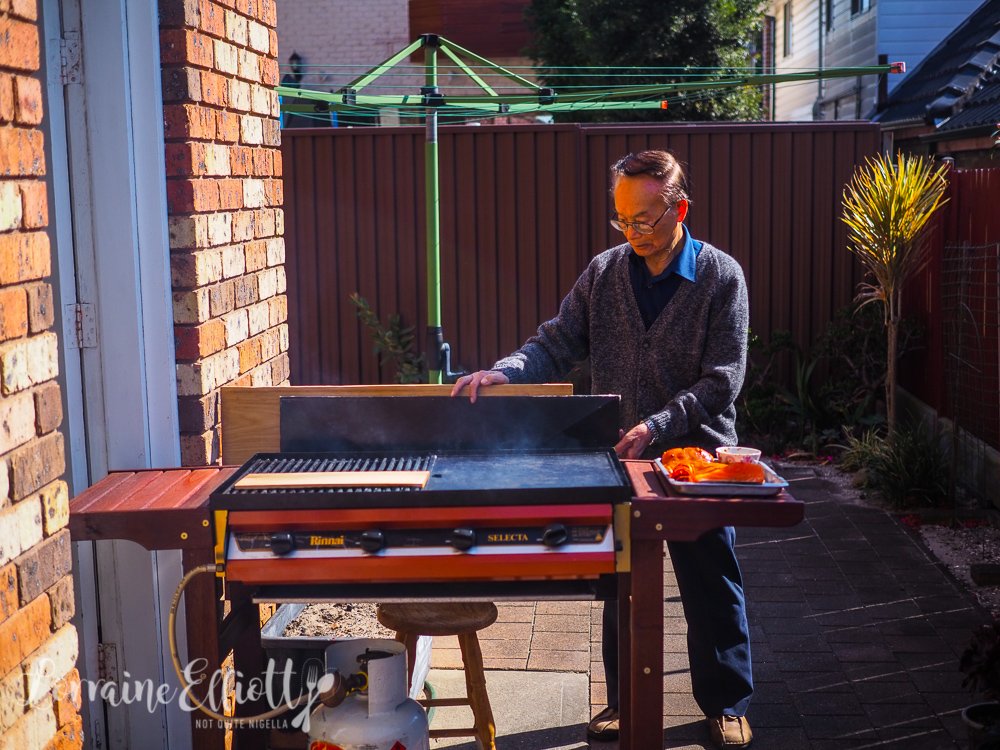 Even if you don't have a large crowd you can also do this with smaller individually sized salmon fillets. Alas the cedar plank can't really be used again because it does get so scorched but if you don't scorch it (I've seen people skip the scorching step) then you probably could. But it's such a creative and fun way to cook food. My father loved the Japanese glaze flavoured with sake, ginger, garlic and white miso plus the blood orange was a seasonal addition and was included because my father eats an orange every night after dinner. 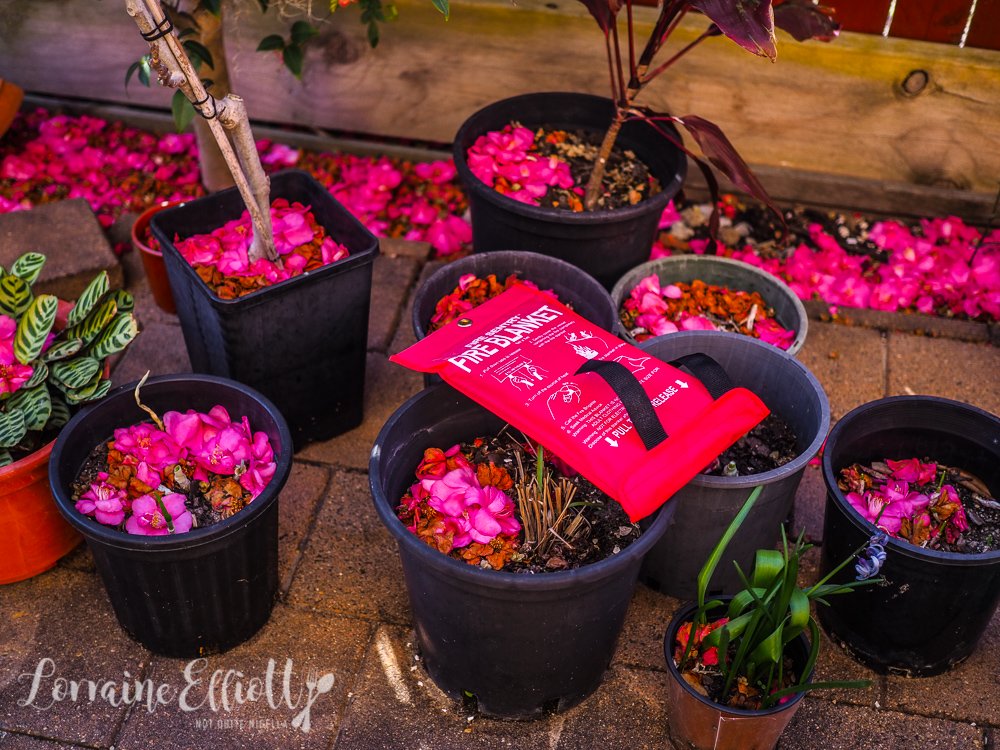 But because he is such a health nut he had to add, "I just have to tell you that wood burning is a carcinogen," before admitting that "it tastes good" which is probably his idea of a high compliment!

So tell me Dear Reader, are you good at barbecuing? Have you ever plank grilled anything? Is your father typical of dads? What will you be making for Father's Day this year? 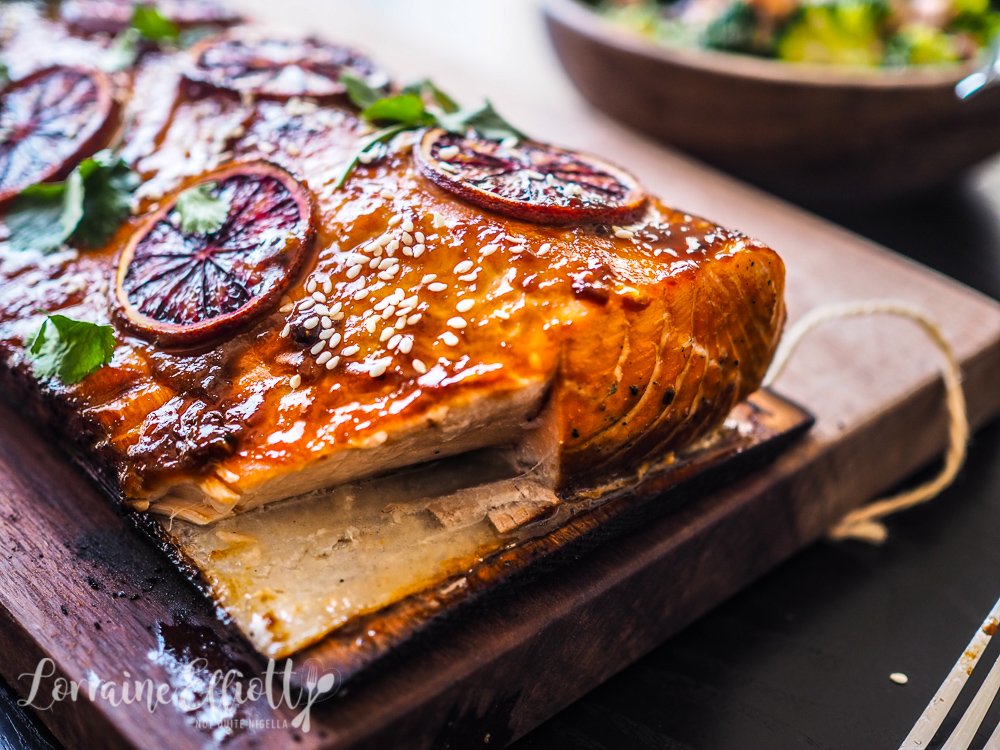 I bought my cedar planks at the Weber store because they had the largest size I could find at 14x38cms but they can also be found at Bunnings (although they're slightly smaller at 13x28cms). They are less than $10 a plank but they come in packs of 2 or 3.

Step 1 - Make sure the cedar board is soaked for at least 1 hour. Mix the miso, sugar, mirin, sake, oil, soy sauce, ginger and garlic in a bowl and brush over the salmon and allow to rest at room temperature for that hour (don't put it on the plank just yet). 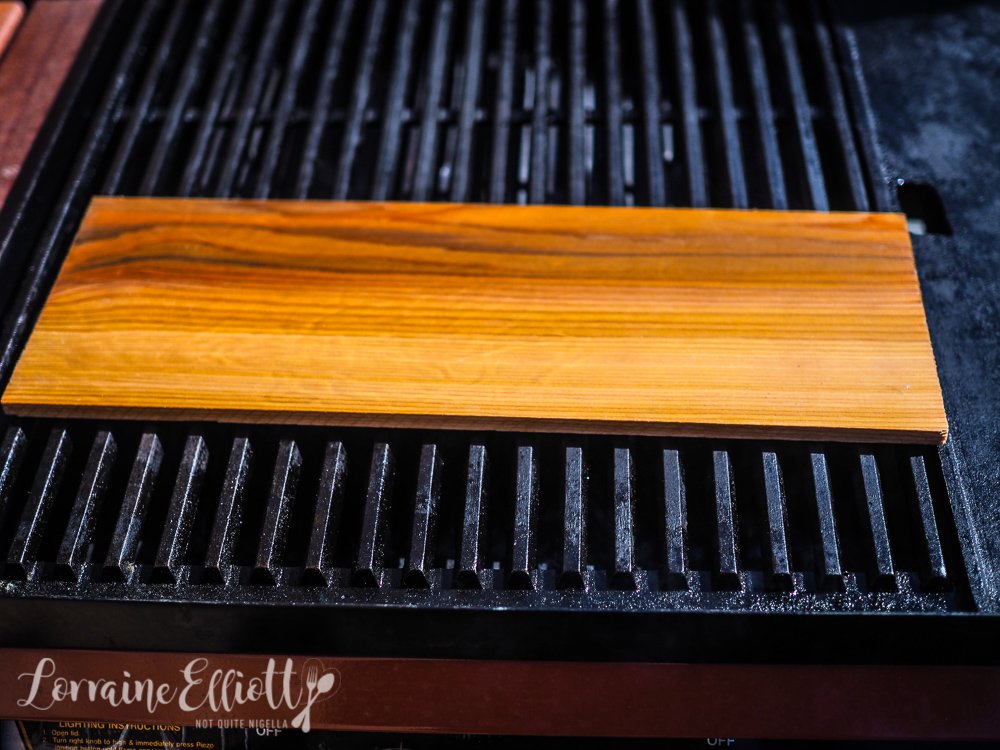 Step 2 - Have a spritzer bottle of water ready in case the plank catches fire (we didn't need it and please don't let that put you off). Preheat the grill on high (this can take 10-15 minutes). Take the soaked plank and char it on the grill for 5 minutes. Turn over the plank and place the salmon on it. 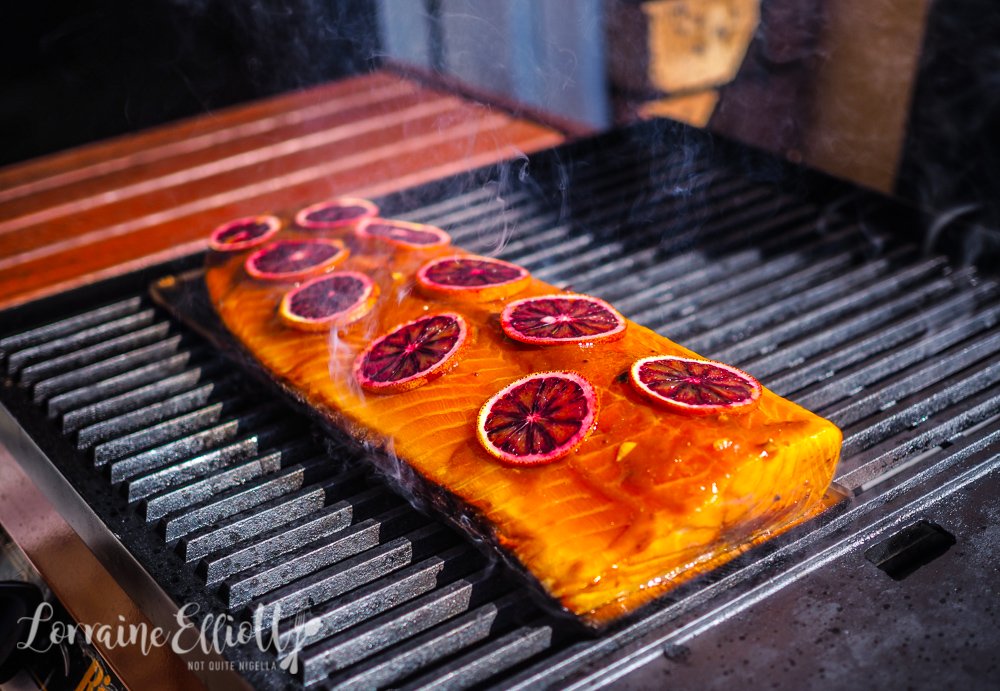 Place the blood orange on top of the salmon and place on the open grill section-I put the tail or thinner part on the cooler bit so it wouldn't overcook. Grill for 10-15 minutes. My father's bbq didn't have a lid so we finished off the top under a grill in the oven to give it a nice finish. Sprinkle with sesame seeds and coriander leaves. 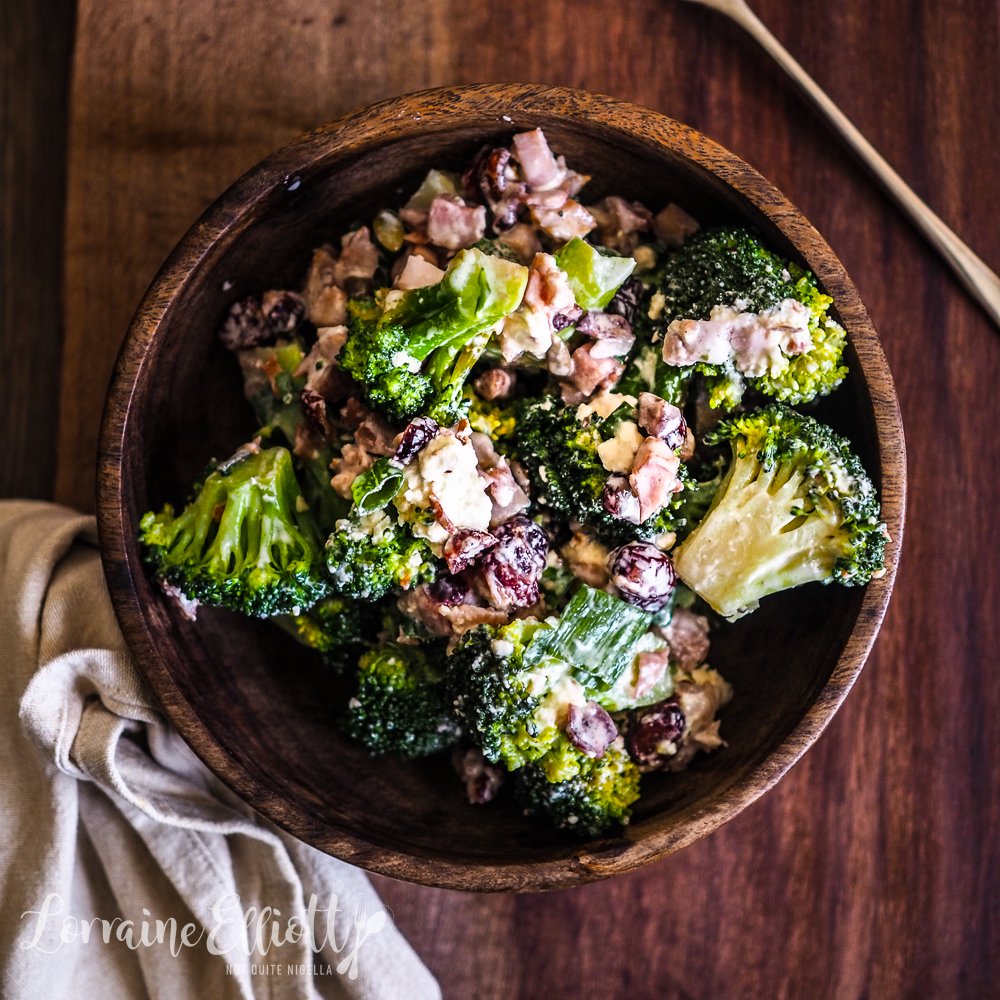 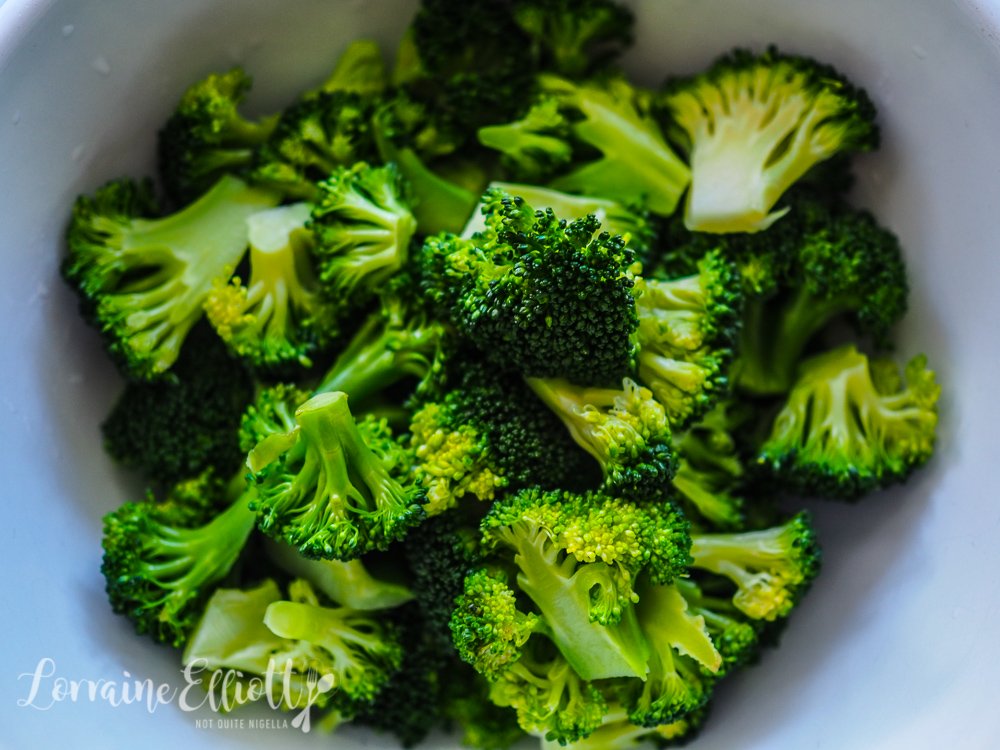 Step 1 - Cut the broccoli into bite sized florets and then blanch in boiling water for 15 seconds and then refresh under cold water to retain a bright green colour until cool. Drain well (I drain it twice) and place in a bowl. 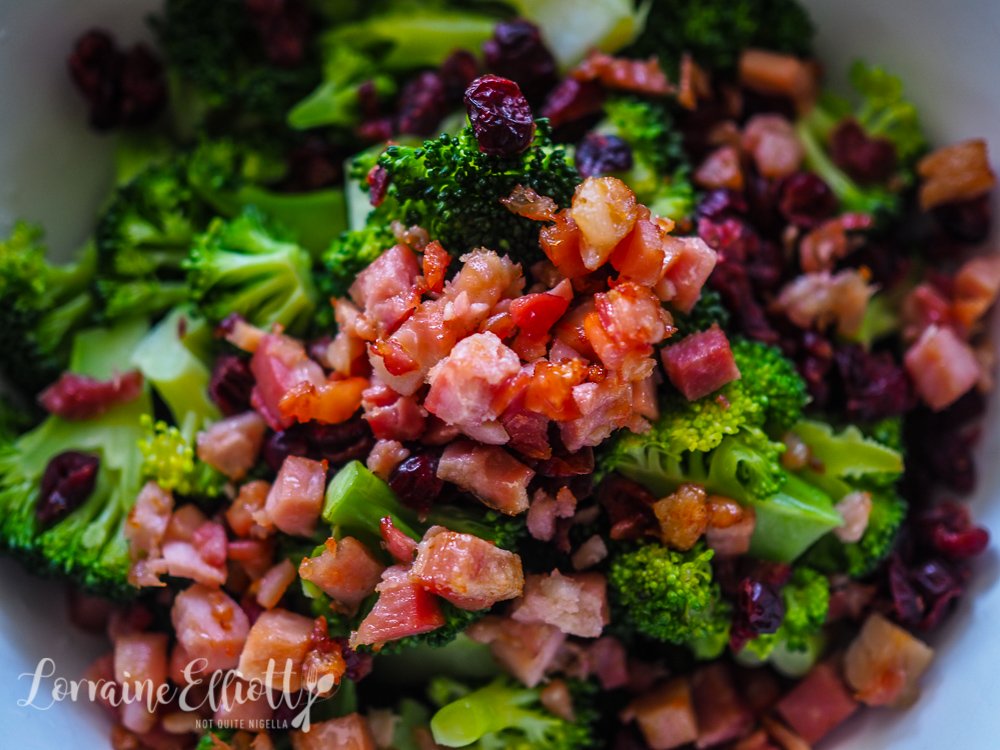 Step 2 - Pan fry the bacon until crispy and then allow to cool. Add this to the broccoli along with the cranberries, crumbled feta, mayonnaise and green onions and toss. Season with salt and pepper. 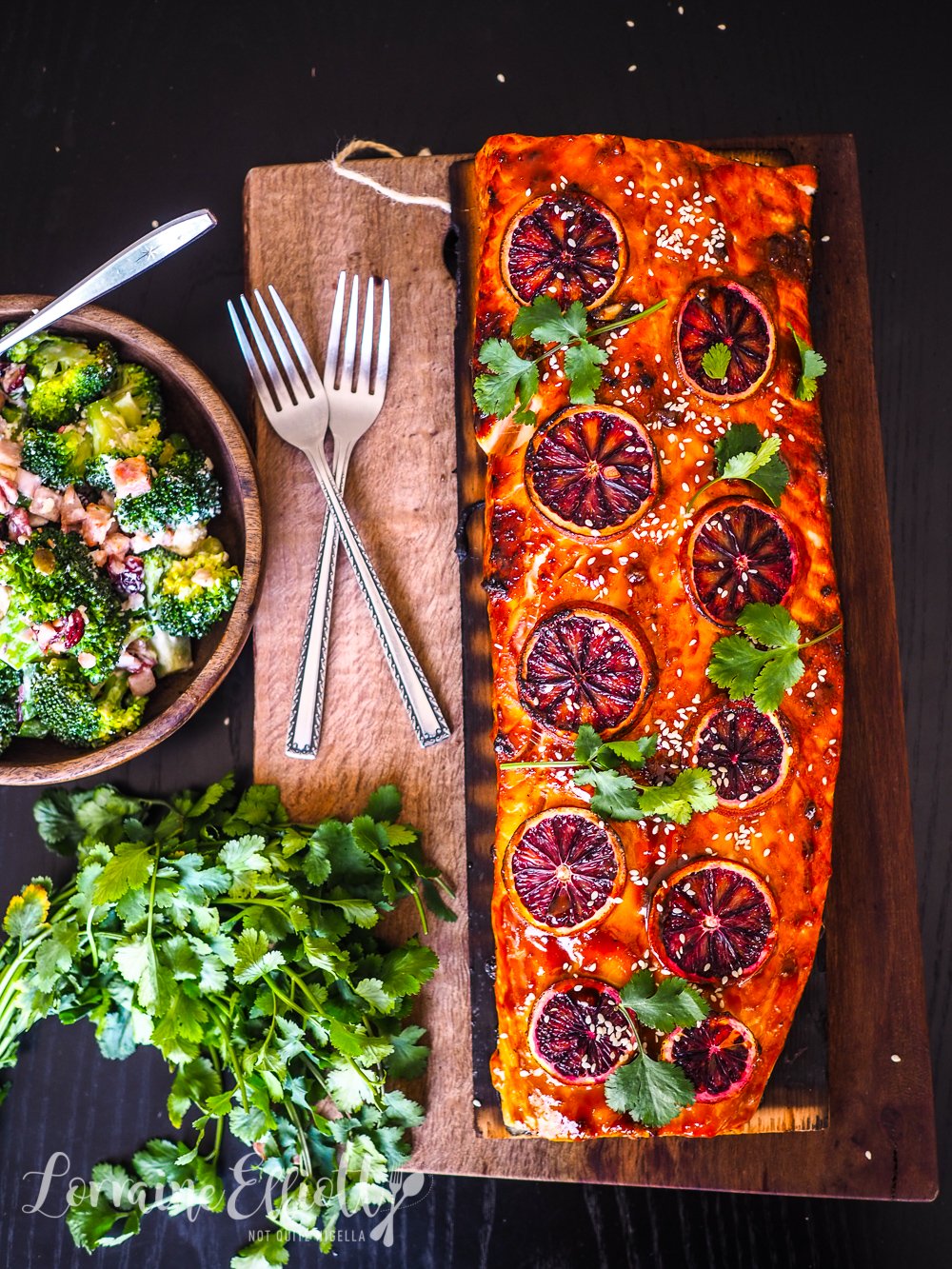