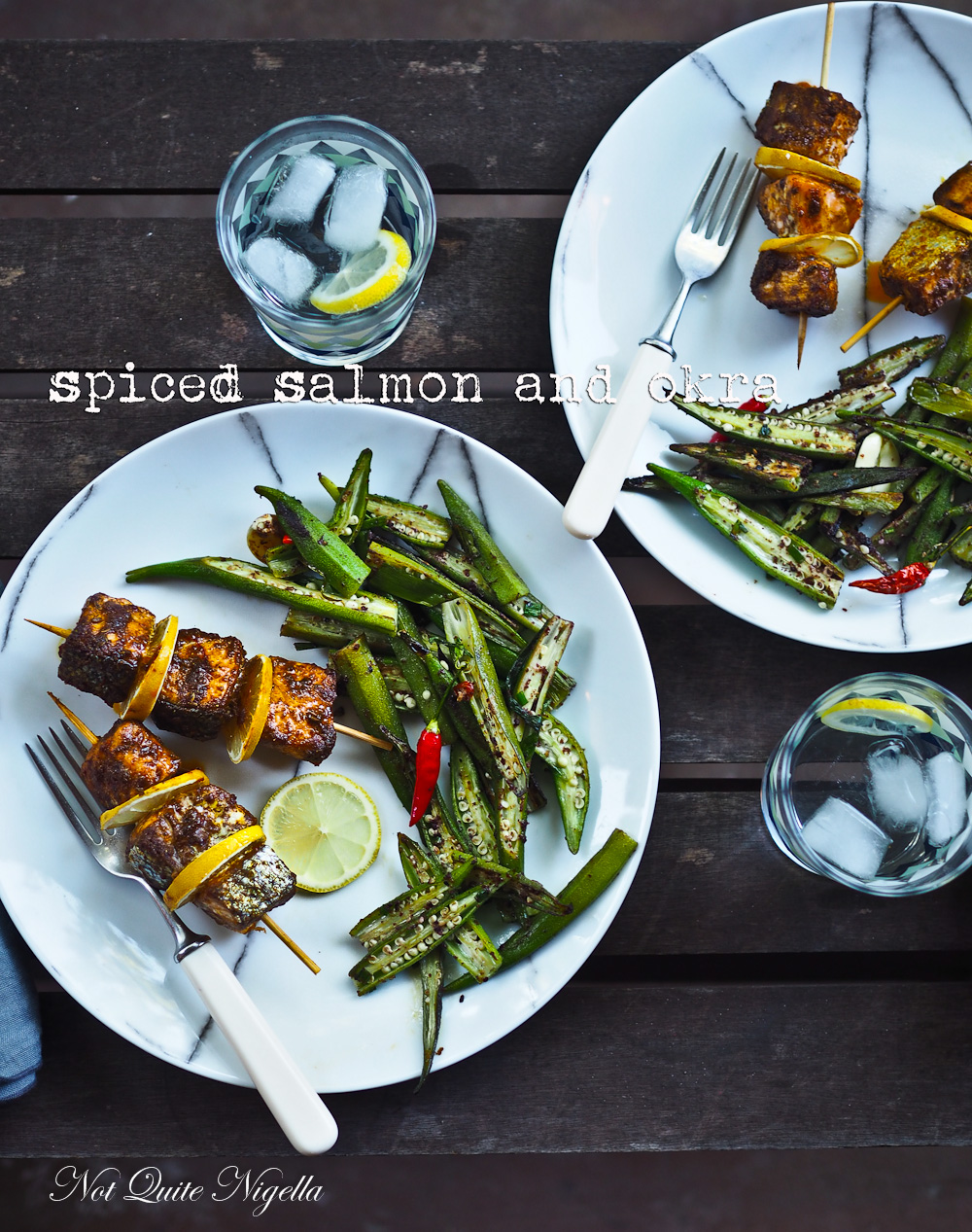 I have a lot of readers ask for salmon recipes. Many people like the heath benefits of the omega 3's in fatty fish like salmon and it's a popular fish in so many countries. Wild salmon is ideal but I've rarely been able to find it in Australia and it's an option that I see overseas in North America. But having said that, I love coming up with recipe requests and this one came about by accident. It makes a gorgeous and quick salmon meal that is also bursting with goodness from the spices to the salmon and okra side salad too!

I once was at a talk where a food writer reminisced about the early days, the good old days of publishing where there was a lot of money to be made and to be spent. When faced with a difficulty they learned a handy adage, that is to "throw money at the problem." When you're up against the wall with few choices, sometimes the best course of action is to pay to get out of things. We do this every day. Instead of cooking, we get take away or eat out. Instead of walking we take cars or public transport and instead of tidying up, we have a cleaner.

I kind of did that with this recipe. I first came up with the idea when we were staying at the Southern Highlands. The idea was to self cater one night. I was excited but a bit nervous because while I'm happy to cook things in my own kitchen, someone else's is a different thing altogether. I didn't even know what protein I would be cooking until just before so I decided to buy a bit of a spice treat: ras el hanout that goes with practically everything. 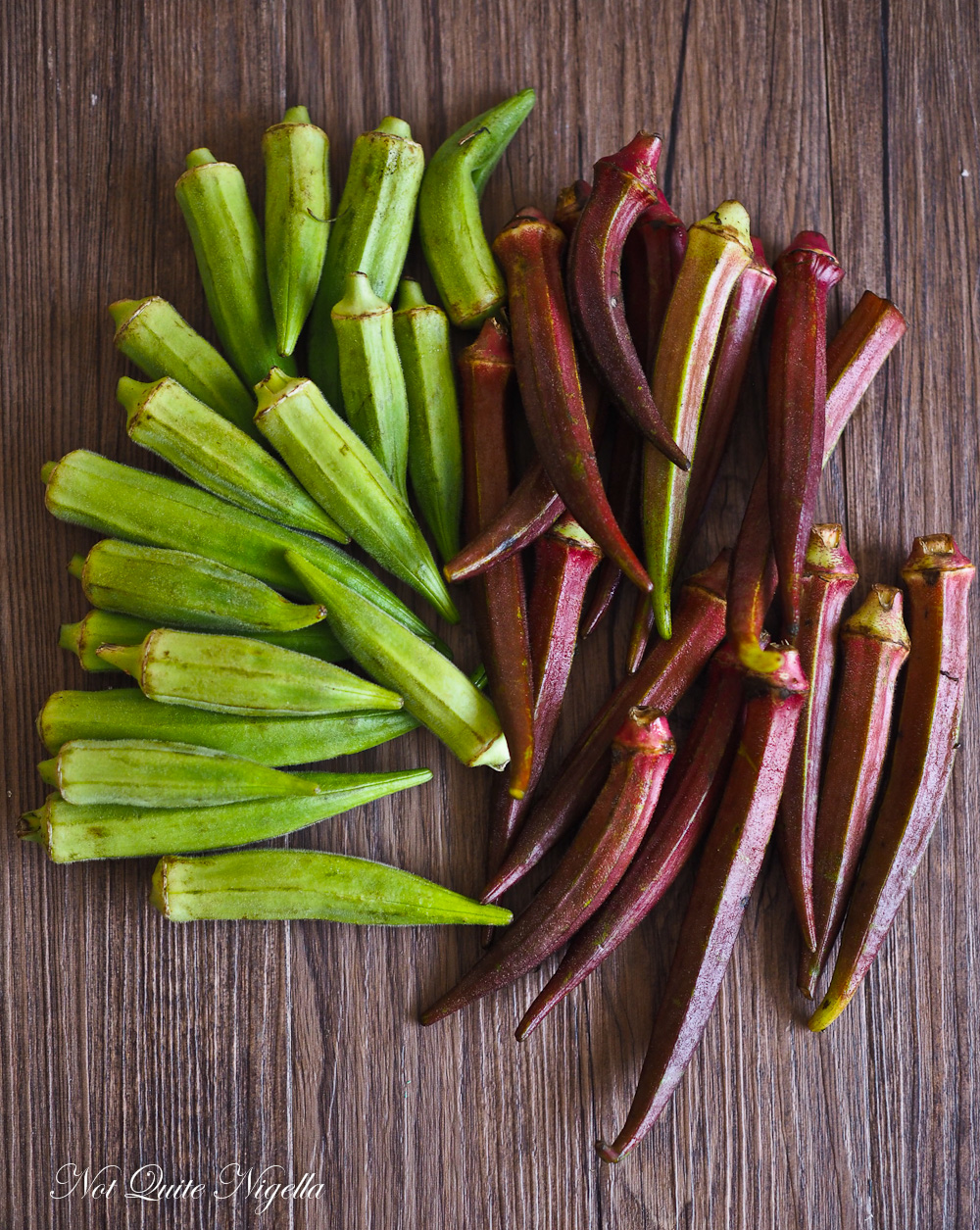 Literally speaking ras el hanout translates to "the top of the shop" and a 50g/1.7oz. packet of it is almost $10 so it's more costly than your average spice mix but it pays dividends because that's all you have to add to the meat or vegetables that you are cooking. Ras le Hanout's origins are North African and Moroccan and the actual mix differs from shop to shop but is regarded as having the best that the shop has to offer. The Herbies one I use is made with paprika, cumin, ginger, coriander, cassia, turmeric, fennel, allspice, cardamom, dill, galangal, nutmeg, orris root, bay leaves, caraway, cayenne, cloves, mace, pepper and saffron. The saffron aroma in particular is beautifully strong here even with this illustrious cast of spices.

I decided to use it on lamb at first. It was beautiful lamb from the farm but I knew that if I spiced it up, Mr NQN would prefer it even more because he doesn't love the smell of lamb. It was delicious and then when we came home I thought that I should try it on other proteins. Also because spices do degrade over time and I wanted to use this mix while it was in prime condition. I decided to make salmon because we both like it but also because I've been asked by Dear Readers for more salmon recipes as it is such a popular fish. 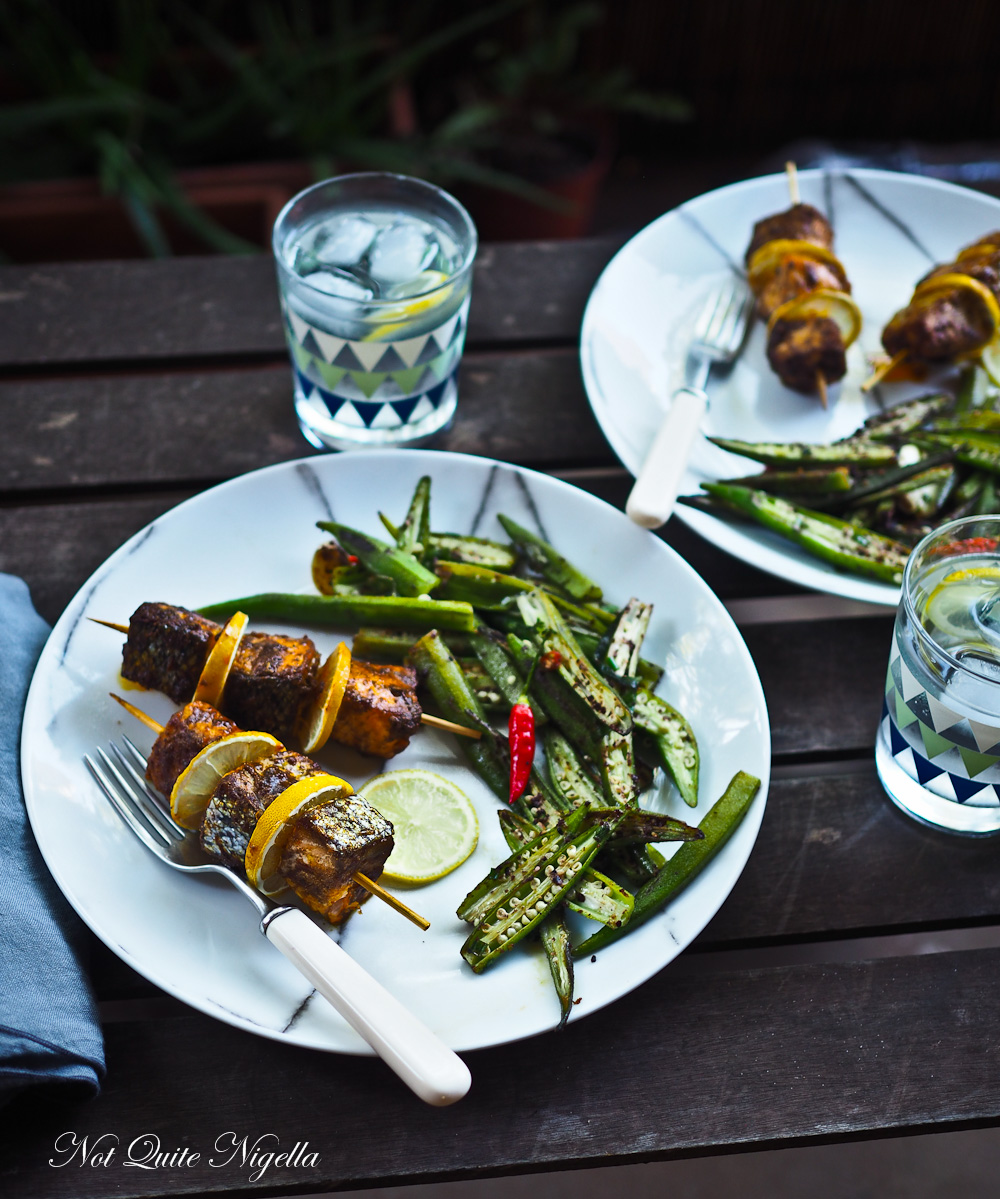 At the market I bought some salmon and then came across some okra. I have never cooked okra but a relative once cooked a great okra dish with chilli and garlic so I decided to do something similar. Her dish didn't have the sliminess that is sometimes associated with okra. If you wash it just before you cook it and don't cut it too much that helps prevent sliminess. I cut the okra horizontally and then cooked it on the highest heat possible. Or an alternative with okra which I'll try when it gets really cold is to embrace the sliminess and use it to thicken a soup where it isn't out of place. But for the purposes of this recipe because I wanted it to cook quickly while the salmon was roasting, it was a stir fry.

Okra is very high in vitamins and the sliminess or mucilage is actually beneficial in lowering cholesterol and make you feel full in much the same way that chia seeds do. It also controls sugar levels and helps to prevent diabetes. And if you've never tried cooking okra I'd really suggest giving it a go this way.

So tell me Dear Reader, do you ever "throw money at the problem?" And have you ever been able to find wild salmon (I'd love to buy it)? Have you tried cooking with ras el hanout? 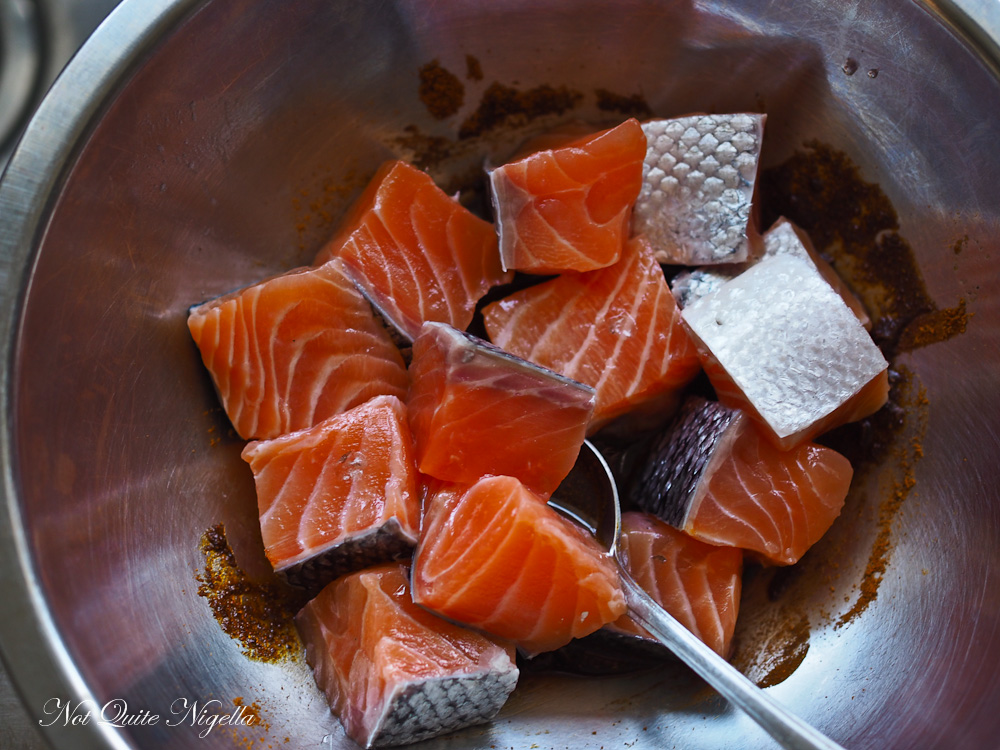 Step 1 - Preheat oven to 180C/380F. Soak bamboo skewers in hot water for 5 minutes (do this while you're slicing up the salmon). Cut the salmon into bite sized pieces. Mix the ras el hanout with the olive oil and toss the pieces of salmon gently coating them. Place on skewer with lemon slices at each end. Roast for 12-15 minutes. 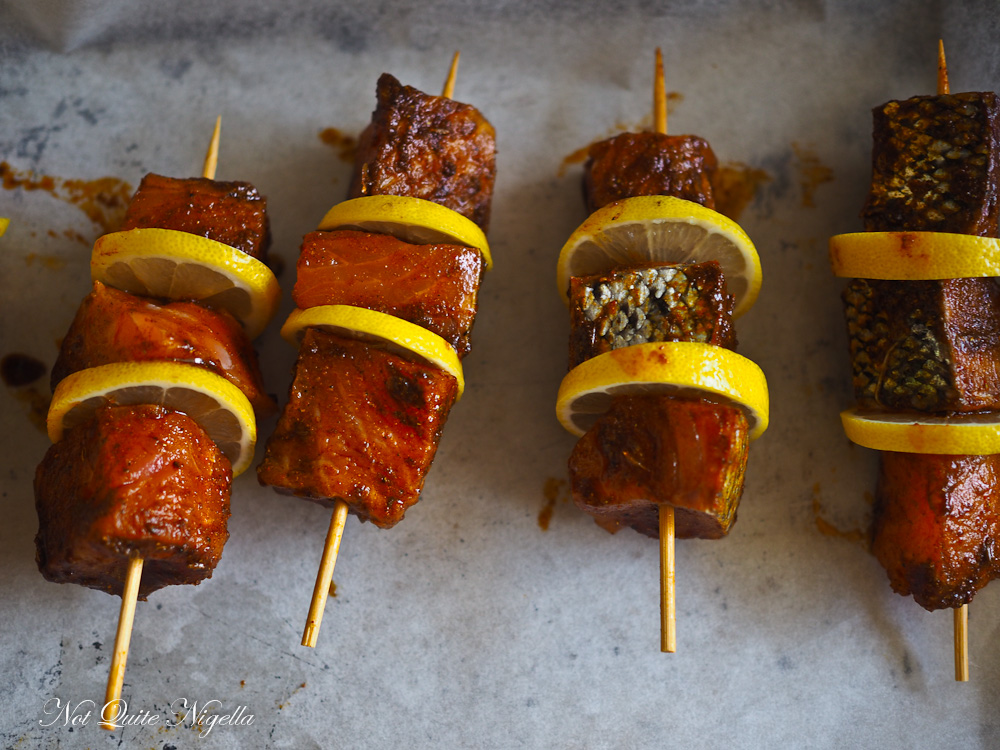 Step 2 - Meanwhile chop off the top of the okra and slice horizontally. On the highest heat, fry the green onion and then add the garlic and chillies. Fry the okra and try not to crowd it so that the okra gets seared well and gets in contact with the hot pan. This is to get rid of the sliminess of the okra. Fry for 8-10 minutes or so until all of the okra is cooked. Sprinkle with sumac and salt to taste. Serve alongside the salmon. 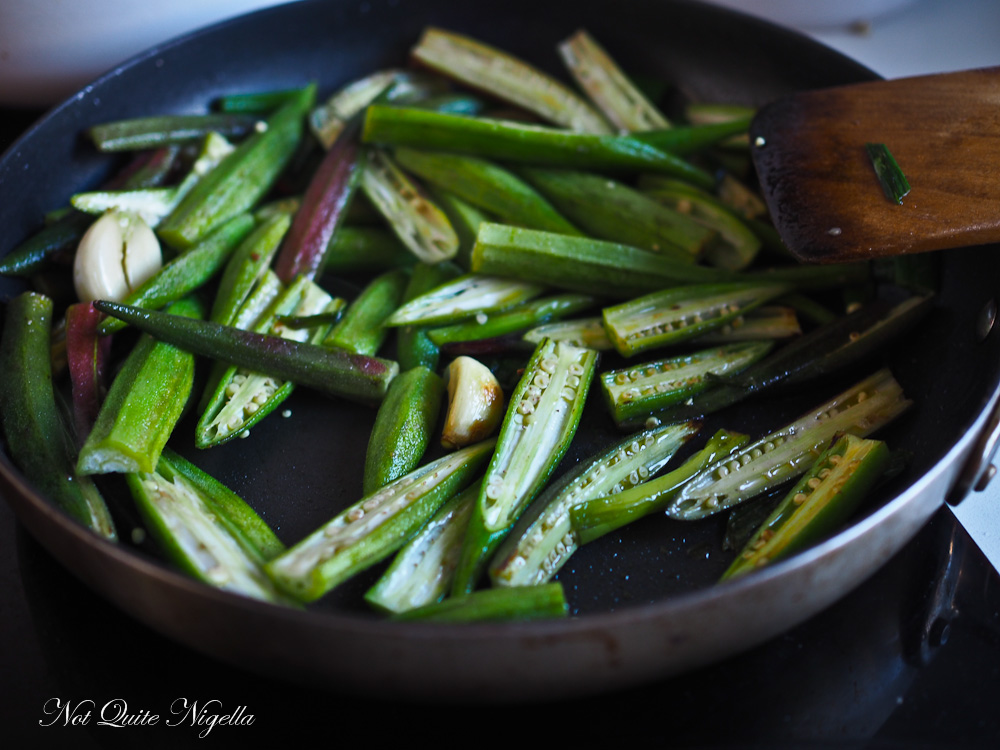