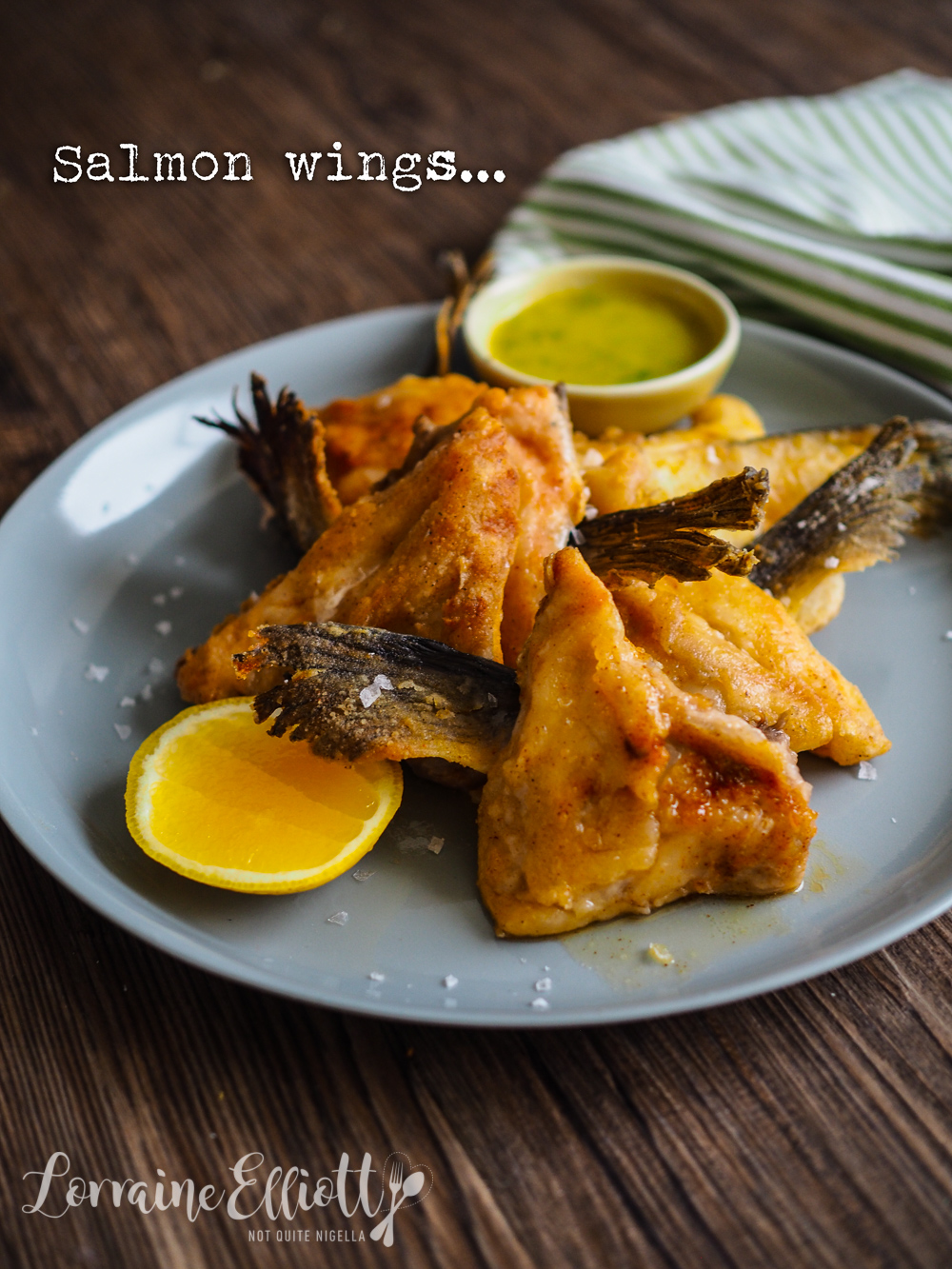 Have you ever seen salmon wings at the fishmonger? These are an inexpensive cut full of meaty goodness. With relatively few bones they are a fun cut to serve, just roast or fry them after dredging them in seasoned flour!

The first time I had something similar was snapper throats in San Antonio, Texas. They came out on a big plate and they had a bit of meat on them but not much. They were spectacular looking though and I was told that they were now almost a prized cut because chefs loved them (sort of like how lamb shanks used to be inexpensive but now aren't because of demand). 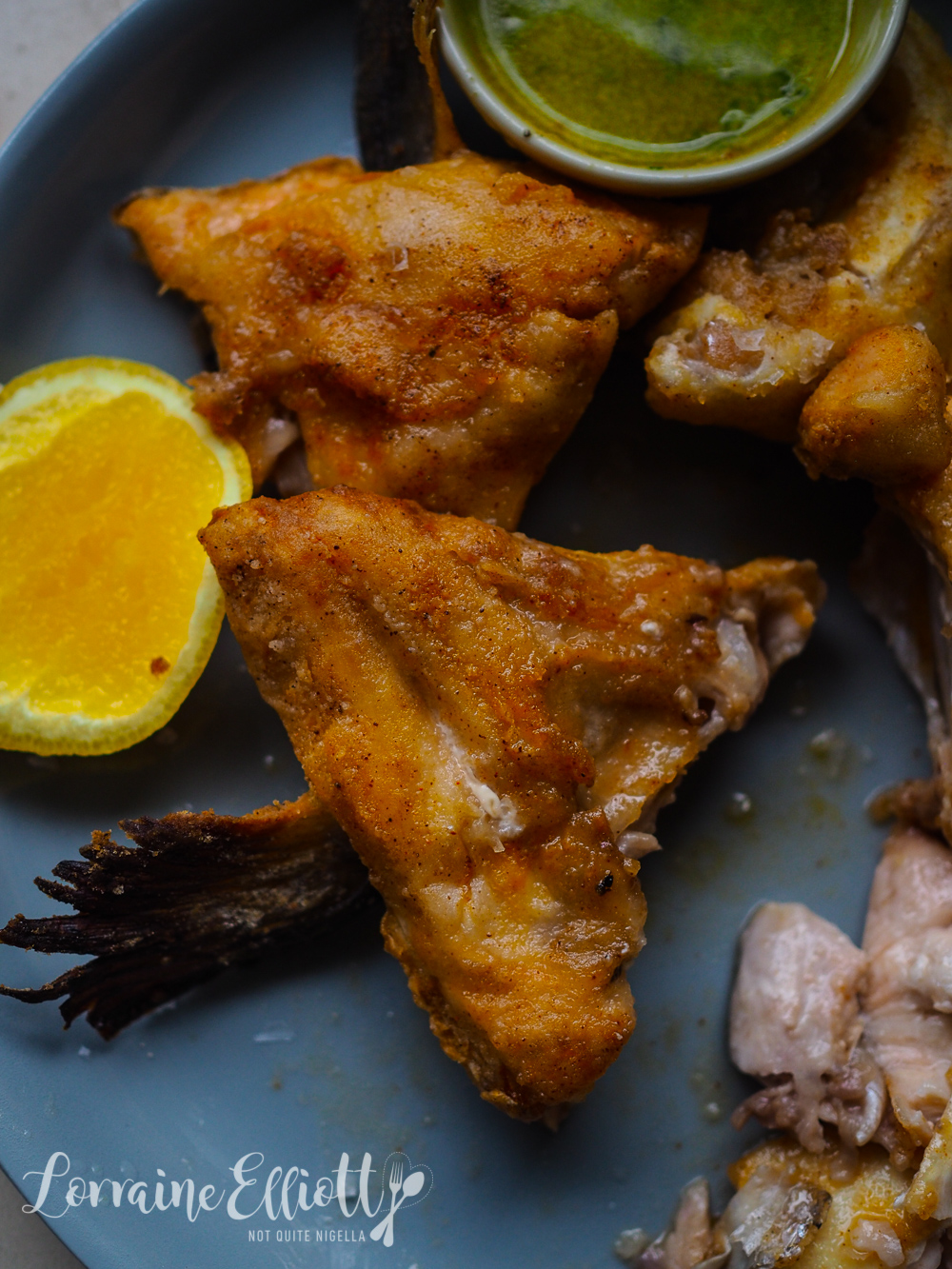 Salmon wings are meatier and if you like all of that glorious salmon fat this may be a cut for you. I bought almost a kilo of them for an absolute steal at $5. Usually they're floured, seasoned and deep fried but me and deep frying don't really gel. I decided to roast these instead and serve them with a green salsa anchovy dressing to cut through the salmon fattiness. These are fantastic and everyone was a fan of them but no one more than little Mr Teddy Elliott.

Do you know that moment when you realise that your dog has outsmarted you? I know that poodles are meant to be clever and I thought that Mochi was definitely clever but Teddy did something the other day that had us floored. 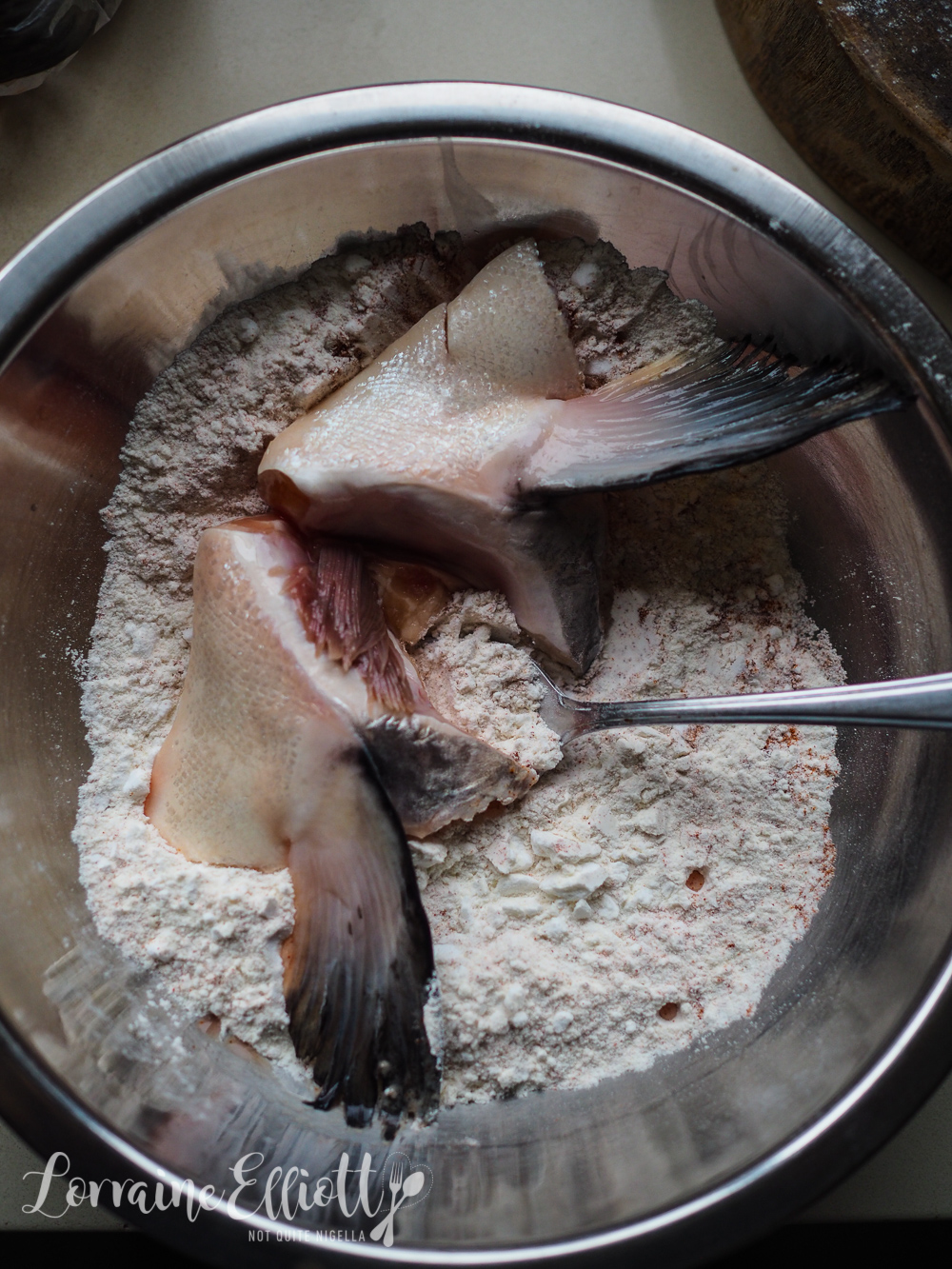 I was pulling these salmon wings out of the oven. Usually during the day he rests and snoozes on a blanket but one whiff of these salmon wings and he walked into the kitchen curious. I let them cool and then started taking them off the bone because Mr NQN hates fish on the bone. Teddy stretched up his long legs against the dishwasher hoping to reach to the bench for the salmon. It was luscious and fatty and I knew he'd like it. I'd thrown him some of the bits earlier that he had gobbled down.

I gave Mr NQN his plate of salmon and sauce and Teddy climbed all over him trying to get to the salmon. I finished my dinner and put my bowl in the sink and then turned around. Teddy was behind me and had peed all over the kitchen floor. "Oh Teddy! Why? You can pee right there!" I said exasperatedly pointing at his pee mat. Mr NQN came in and quickly cleaned up the mess (he's on pee and poo duty, I have a phobia) and then wiped it up with the special cleanser. 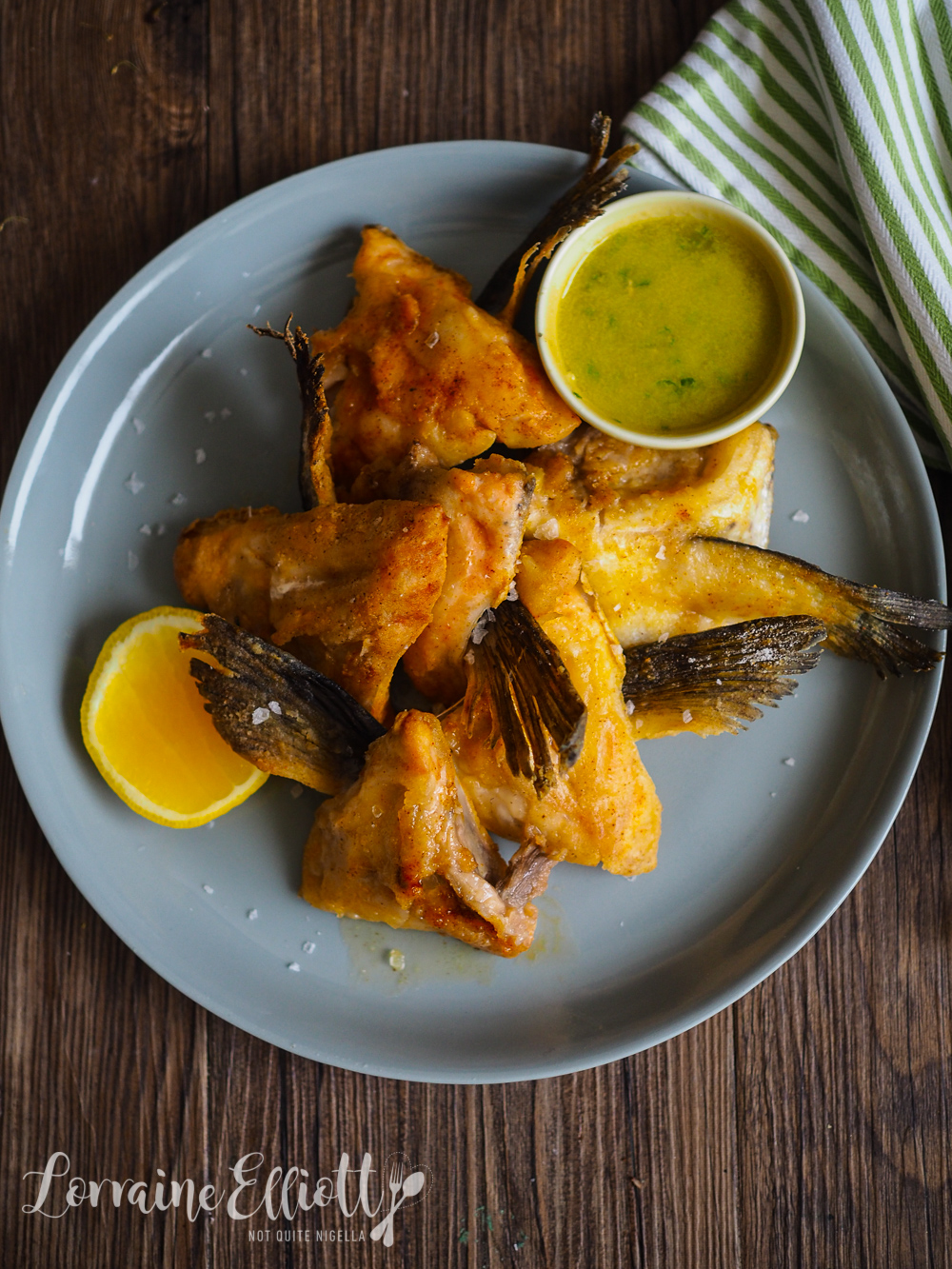 In that time Teddy had quietly stolen to the table where Mr NQN's dinner was sitting and had stolen his salmon wings! The sneaky little boy had created a diversion to distract us and then slipped in to retrieve his ill gotten gains! He looked rather pleased with himself having eaten the salmon. After that we cottoned onto his naughty ways. Although sometimes he will get the better of us!

So tell me Dear Reader, when was the last time you were outsmarted? Have you ever tried salmon wings? Do you like these sorts of cuts? 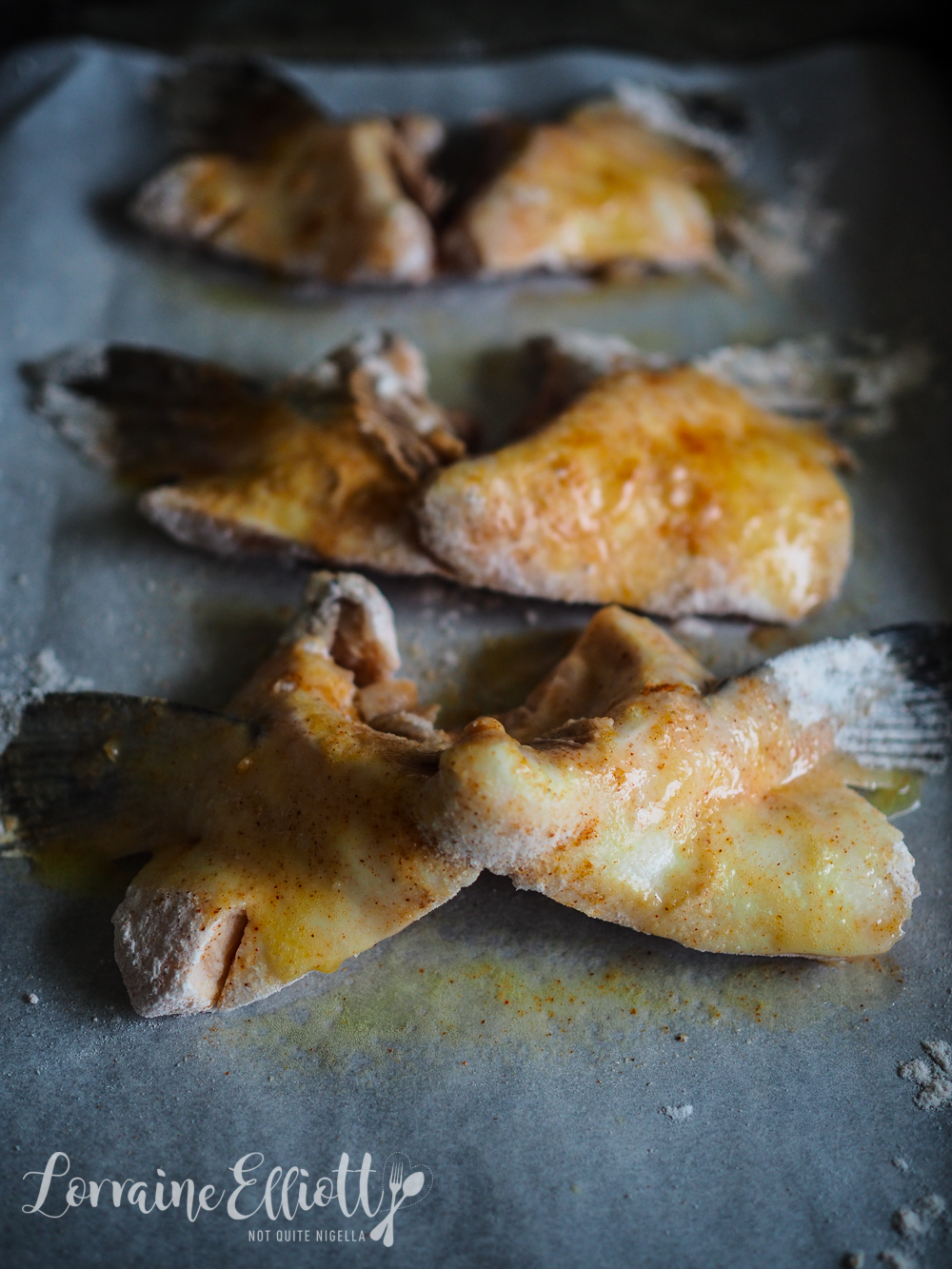 Step 1 - Preheat oven to 200C/400F and line two trays with parchment. Place the flours with the cayenne, salt and pepper in a ziplock bag or in a bowl and shake around to distribute. Dip the salmon wings in each coating all sides and place onto the prepared tray. Drizzle with oil and bake for 10 minutes. Turn over and roast for another 5-8 minutes. 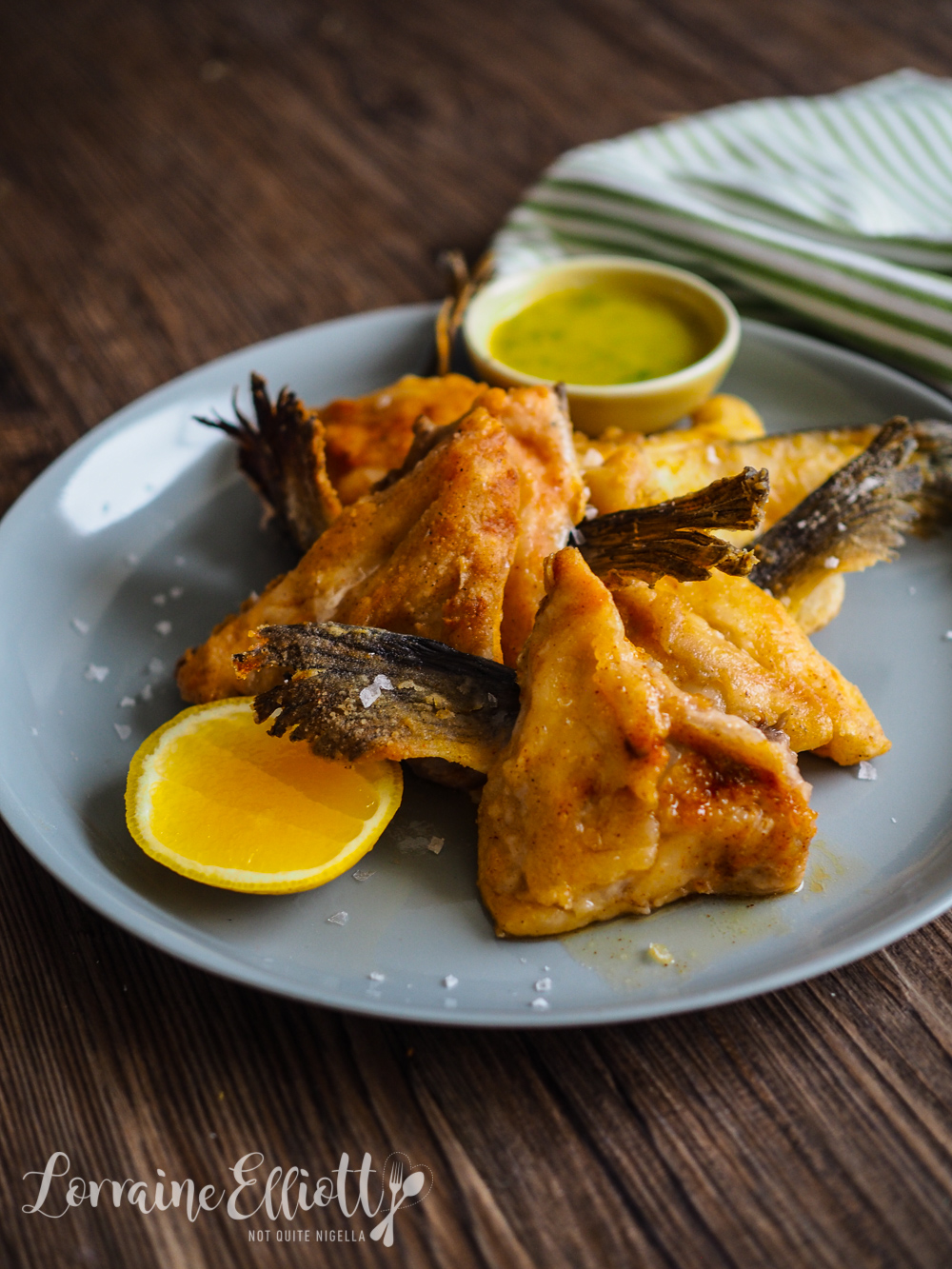 Step 2 - Meanwhile make the salsa verde. Place all ingredients in a food processor and whizz to combine. Serve with the salsa and lemon on the side.