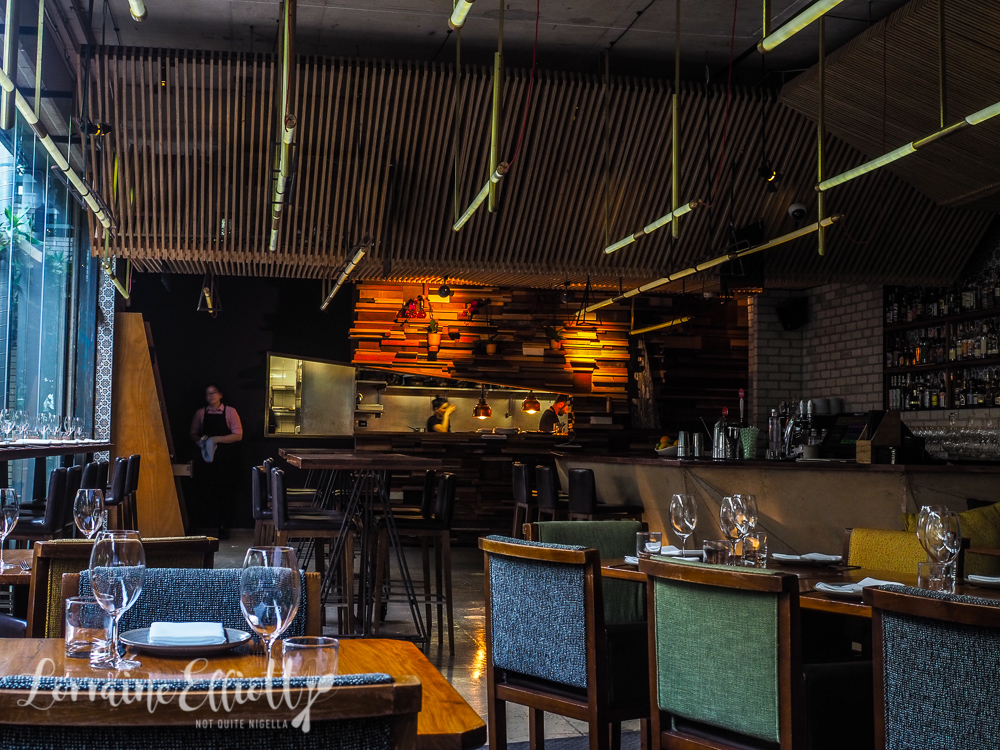 Eating in the Fortitude Valley, you're almost spoiled for choice. In amongst the cafes and boutiques selling airy, colourful caftans and dresses sits Gerard's Bistro, a modern Middle Eastern restaurant serving delicious bites such as felafel crumpets and scorpion fish.

Admittedly, Gerard's is nothing that I thought it would be. To me the name suggests a French restaurant (or is that just me?). The restaurant is modern and while it's nice enough, it doesn't feel like it is quite finished or committed to a theme.

Gerard's is modern Middle Eastern food combined with touches from Asian cuisine too. Service is friendly with a good knowledge of the menu. I'm having lunch with the lovely Sherry and Mr P this sunny afternoon. 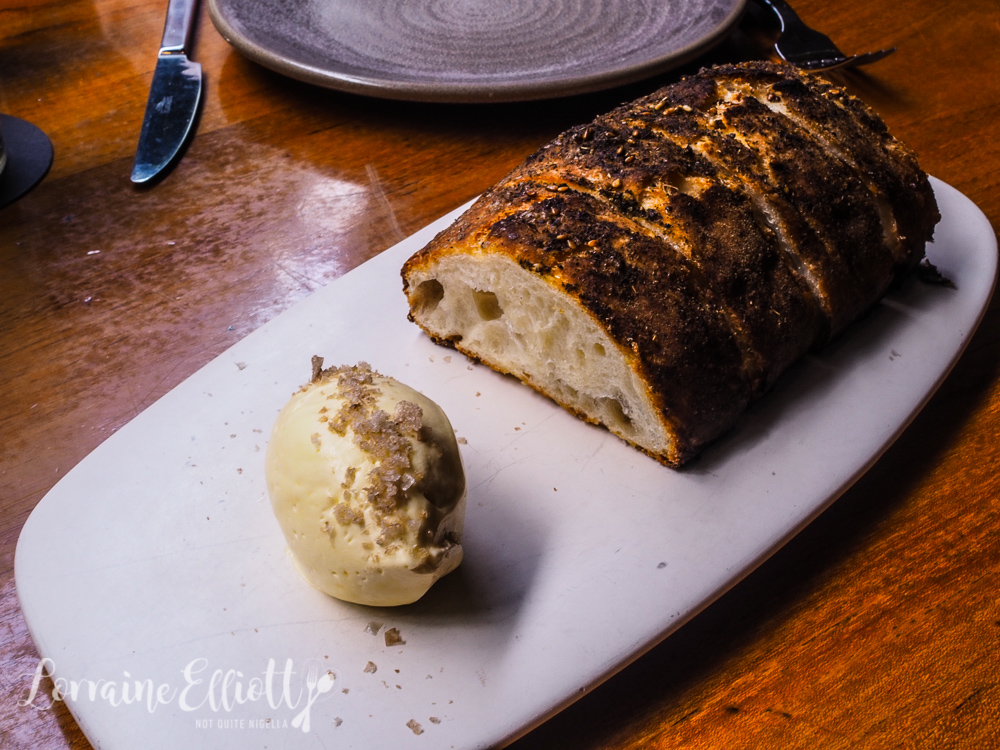 We start off with the house bread and butter because we all love bread. The warm bread has a thick, crispy crust and the bread is smooth, tangy and perfectly salted. 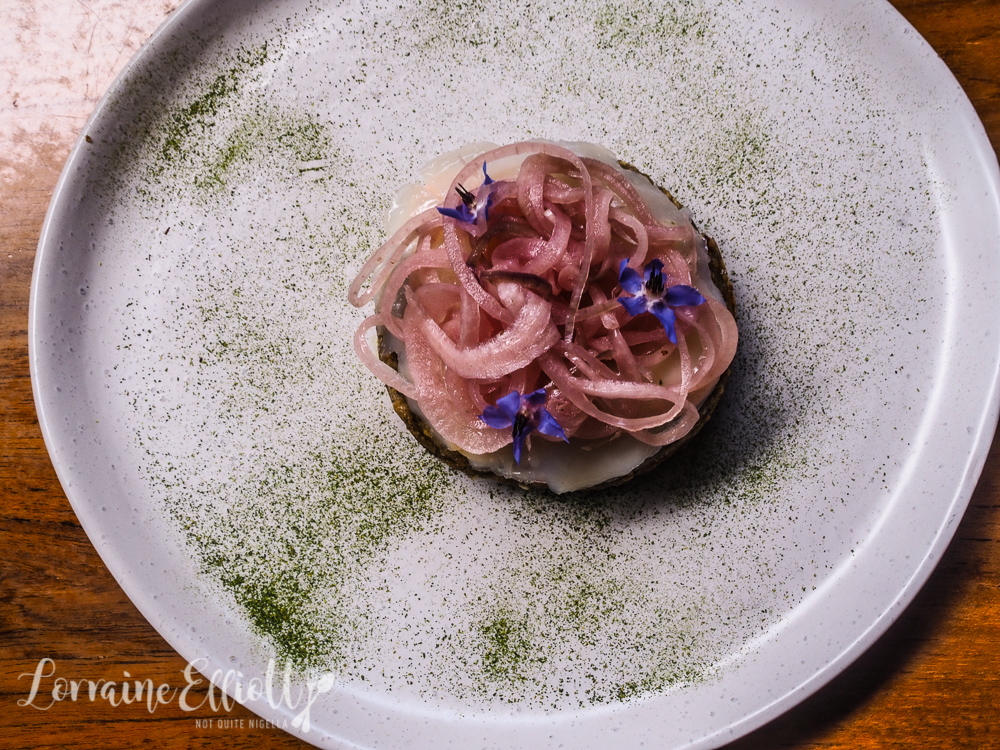 My choice is the felafel crumpet-two of my favourite foods in the world combine as one. It's a chickpea crumpet, all spongy soft and draped with sliced raw scallop, whipped roe, lemon puree and pickled onion. As soon as I finished my portion I immediately wanted another. 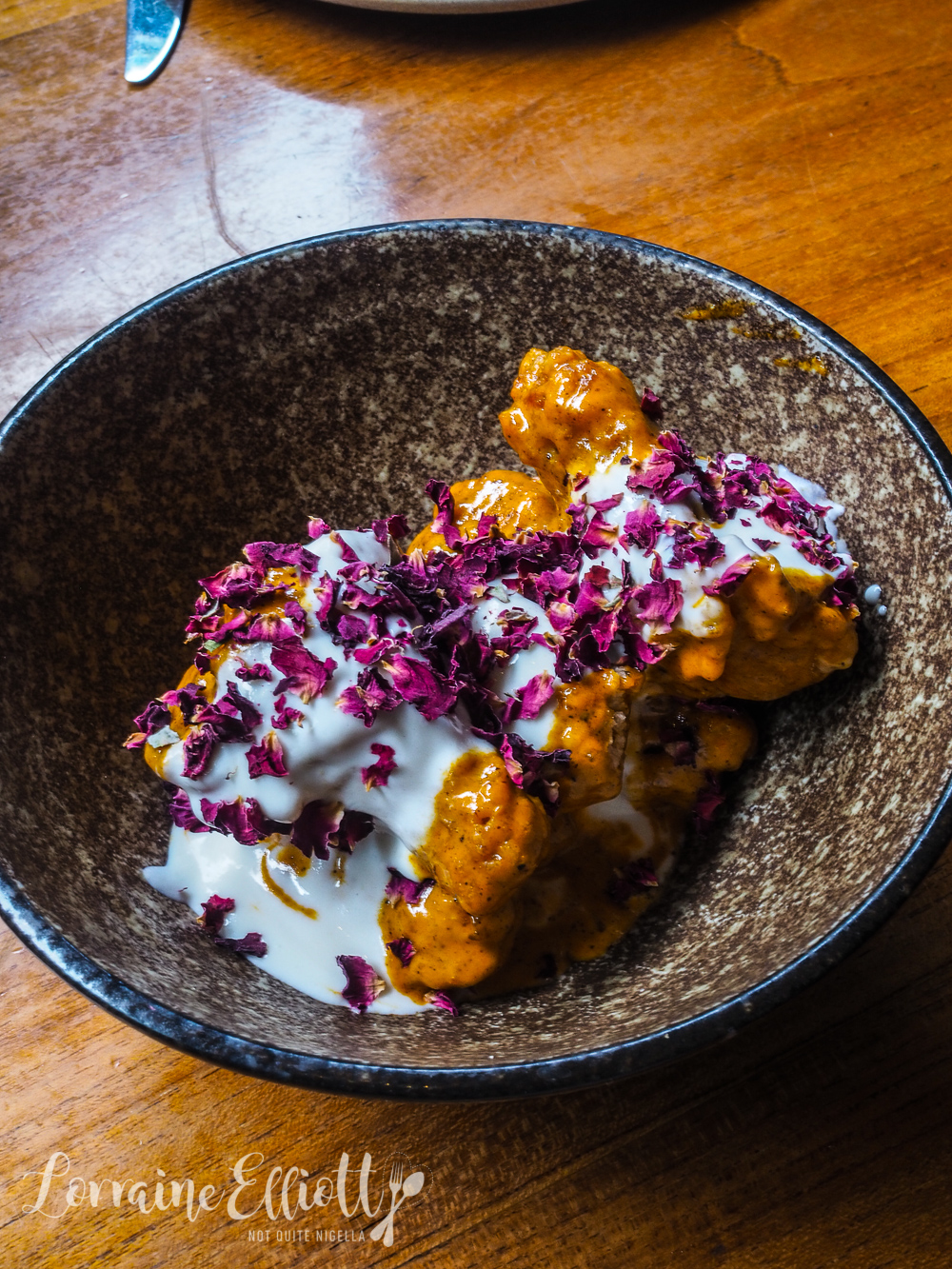 Chicken and rose petals? It's a thing here at Gerard's. The Bekaa wings are fried chicken drumsticks that have crunchy crumb and are then coated in a spiced, curry like sauce with kishk or wheat yogurt and rose petals that give it a sweet fragrance. They're quite nice-and the rose petals that may seem odd do quite work. 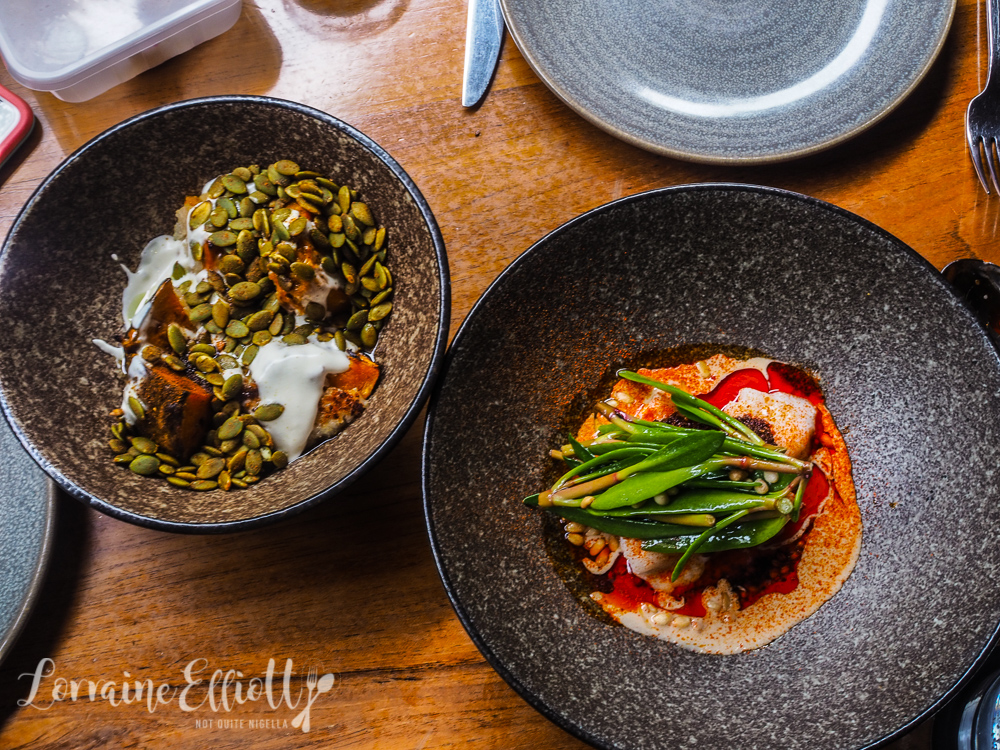 The scorpion fish is a lovely firm fish that flakes in large, meaty chunks. There are four pieces in this dish and each piece has some savoury Turkish chilli on top as well as caramelised tahini, pine nuts and sea succulents. The caramelised tahini isn't as sweet as I thought it might be and this dish has a pronounced savouriness and saltiness to it.

The pumpkin goes perfectly with the scorpion fish, the sweetness of the pumpkin and crunch contrasting well with the pronounced savouriness of the fish dish. 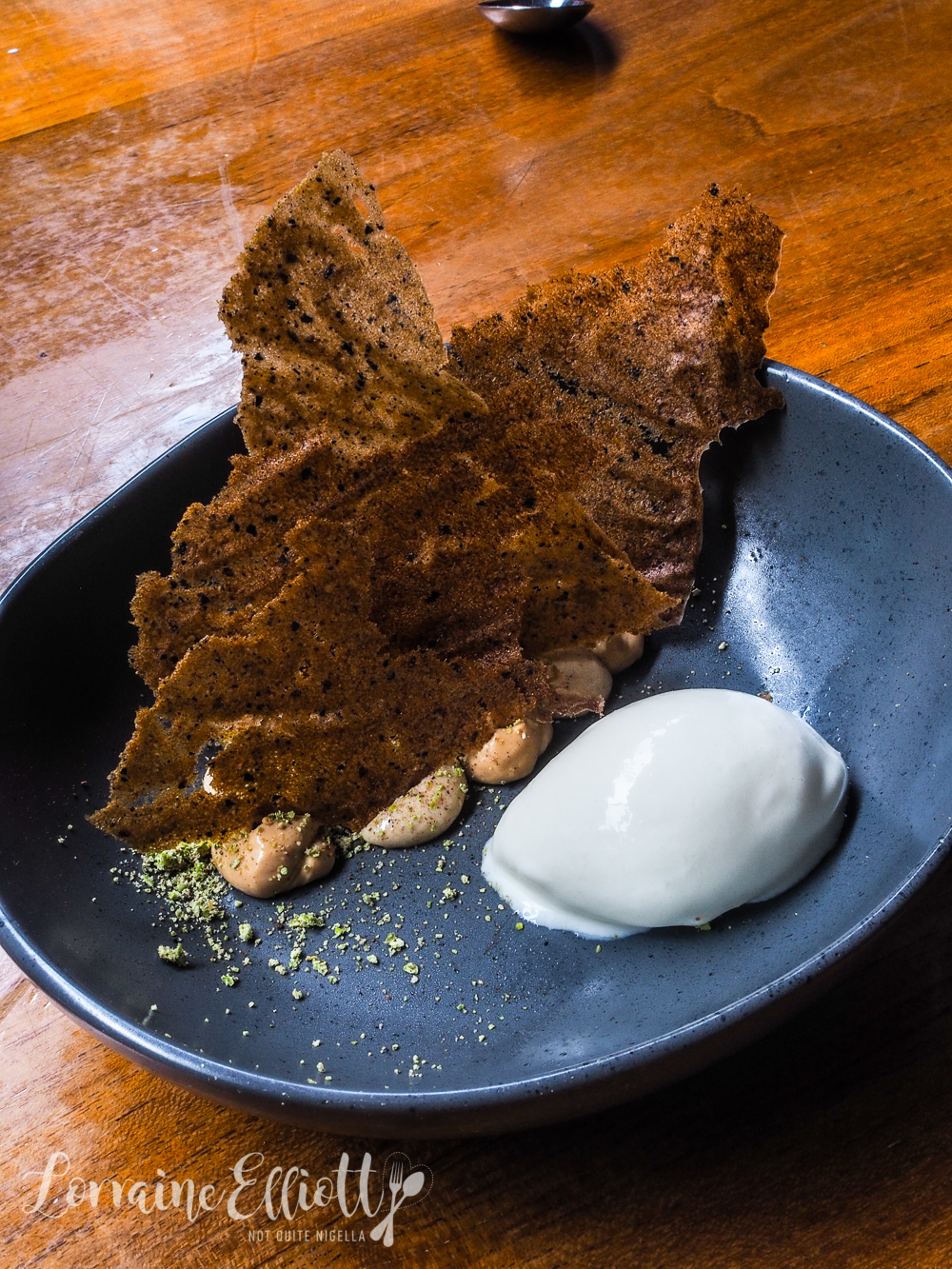 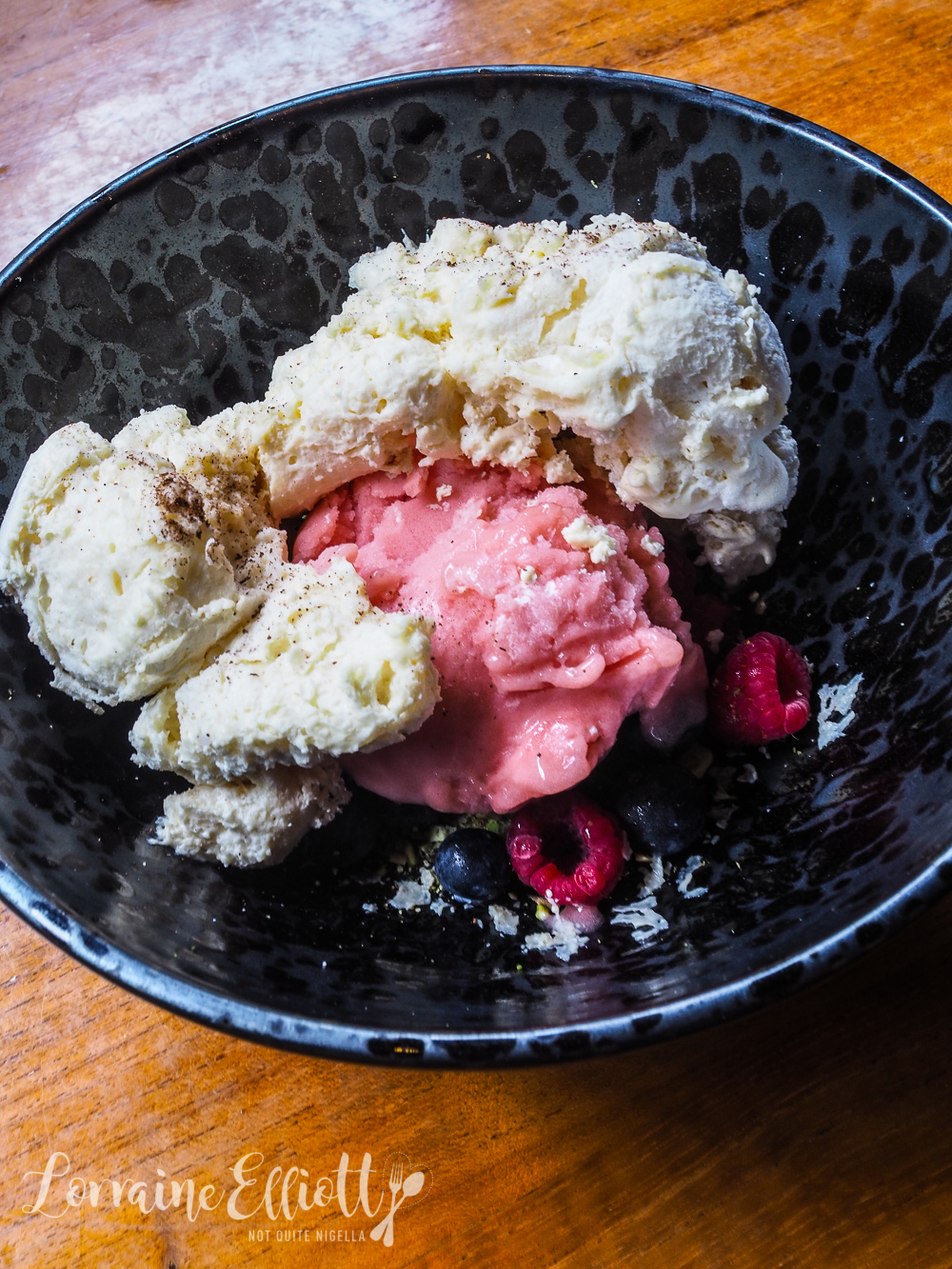 We all preferred the nitro sahlab cream with a tart, unripe strawberry sorbet, berries and pistachio crumbs. Sahlab is a Middle Eastern milk pudding traditionally made with orchid root flour to help thicken it. This one is perfectly sweet and moreish and the pistachios is a traditional accompaniment while the sorbet and berries is a more modern interpretation. And between the three of us, we manage to make quite a dent into this!

So tell me Dear Reader, have you ever tried scorpion fish? If you found your favourite two foods combined in one dish would you automatically order it?