Things You Must Eat: Stromboli! 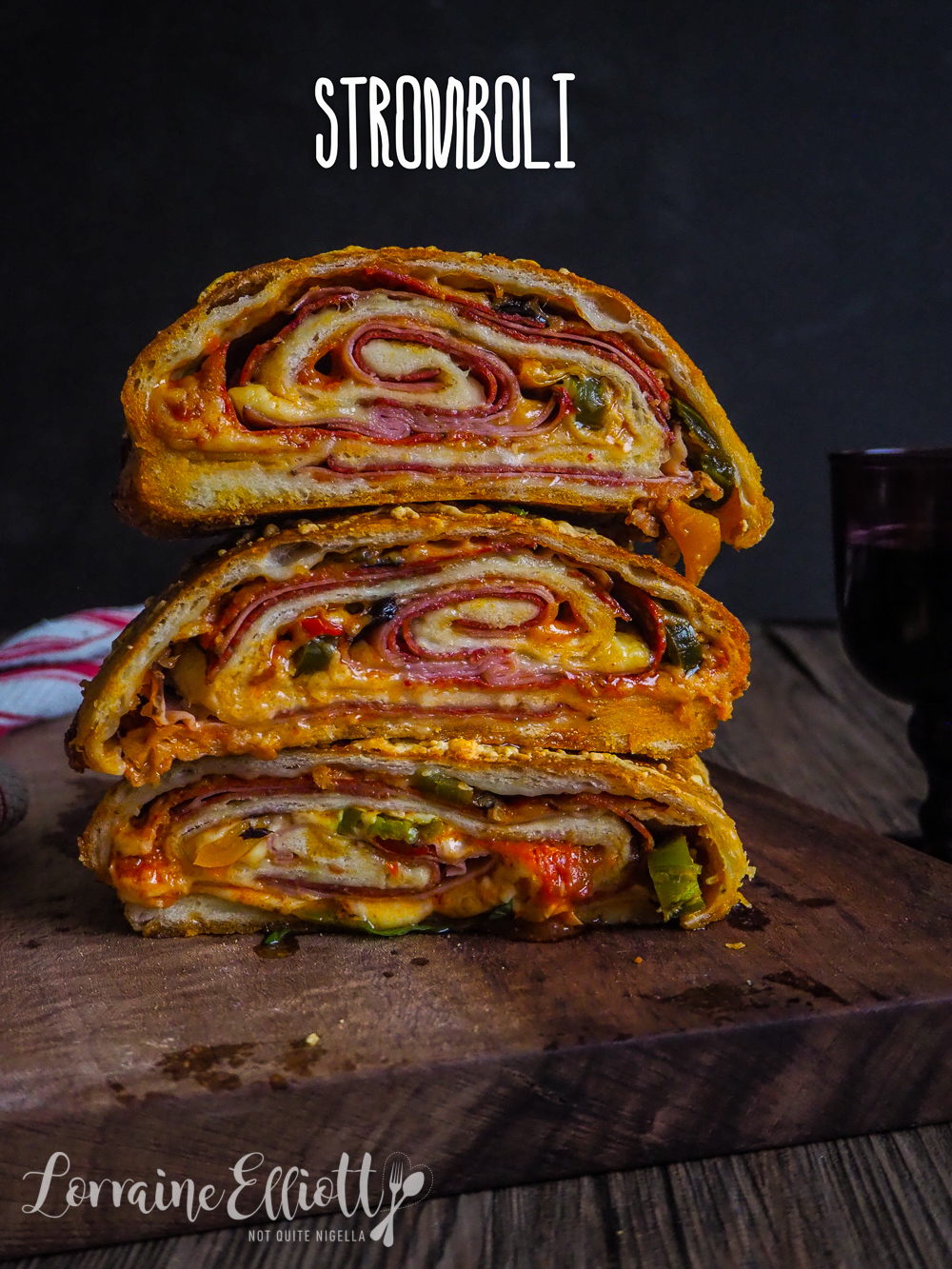 Dear Reader, honestly this is one of the most delicious things I've ever eaten. If you love pizza then you'll adore this version called a stromboli. It's a candy striped, multi layered pizza roll that melts in the mouth with three types of cheese and two types of salami and triple smoked ham! And yes, this is a pushy recipe using my very favourite pizza dough!

But I would hazard a guess that this would appeal to an Italophile because all the ingredients are what you might find on a pizza. The only real change is that the ratio of pizza dough to filling is tipped in favour of filling. If you love fillings or a perfect dough to topping ratio then this is a dream come true. 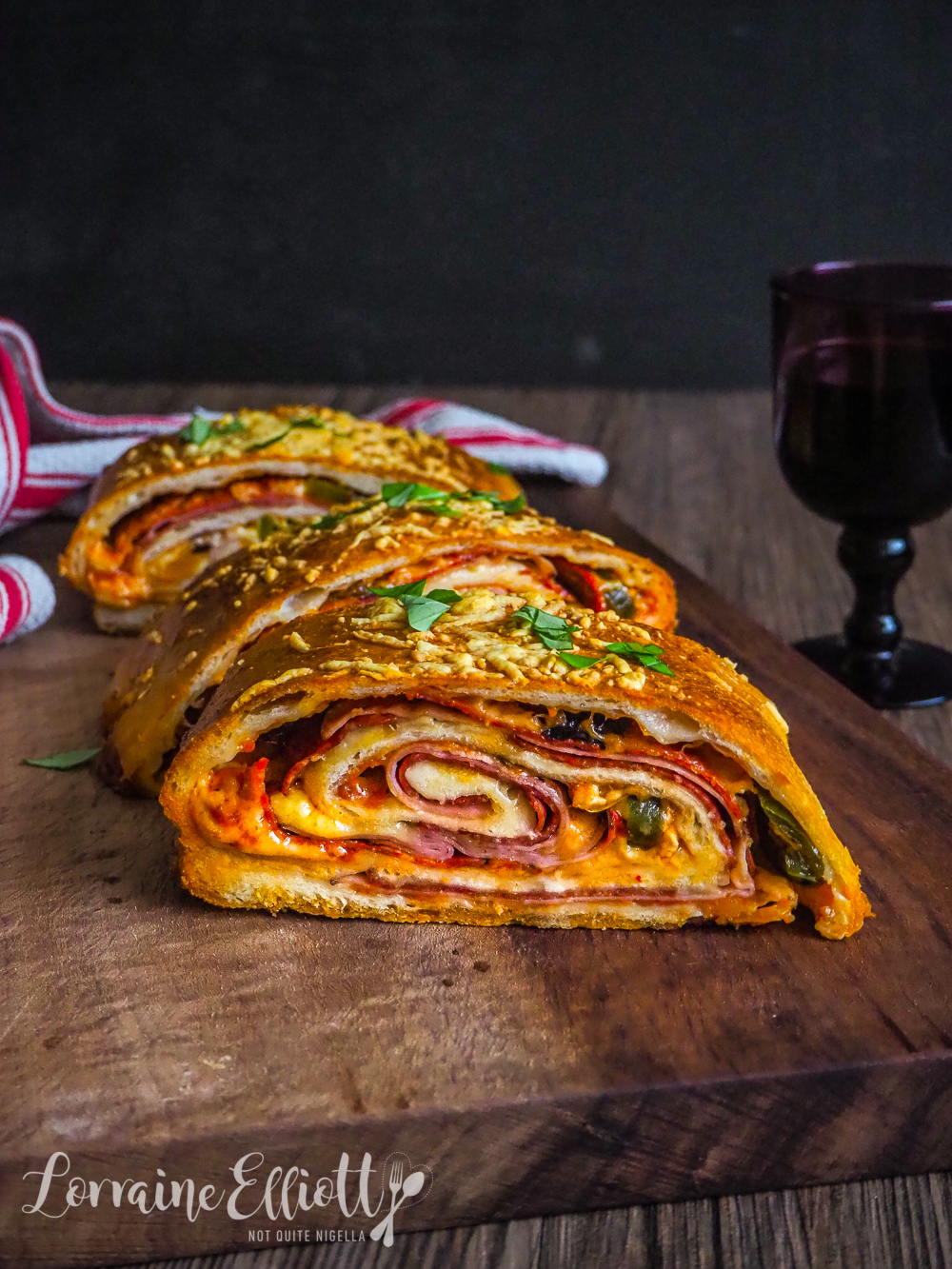 I actually discovered these as it was a passing comment one night over dinner. We were at a pizza place and had ordered a calzone. It came to the table and it was good although Ryan remarked that there was too much dough for the filling. He then asked if we had ever tried a stromboli.

I hadn't even heard of it but being somewhat (okay very) pizza obsessed I looked it up and then started to become obsessed with wanting to eat it. That's basically why I cook certain things, just because I want to eat them. They usually come about in my head through a fantasy when I daydream about what I'd like to eat. It's basically what I would do when I was a kid and I was bored because I was waiting for my parents or at an event where I had to behave. 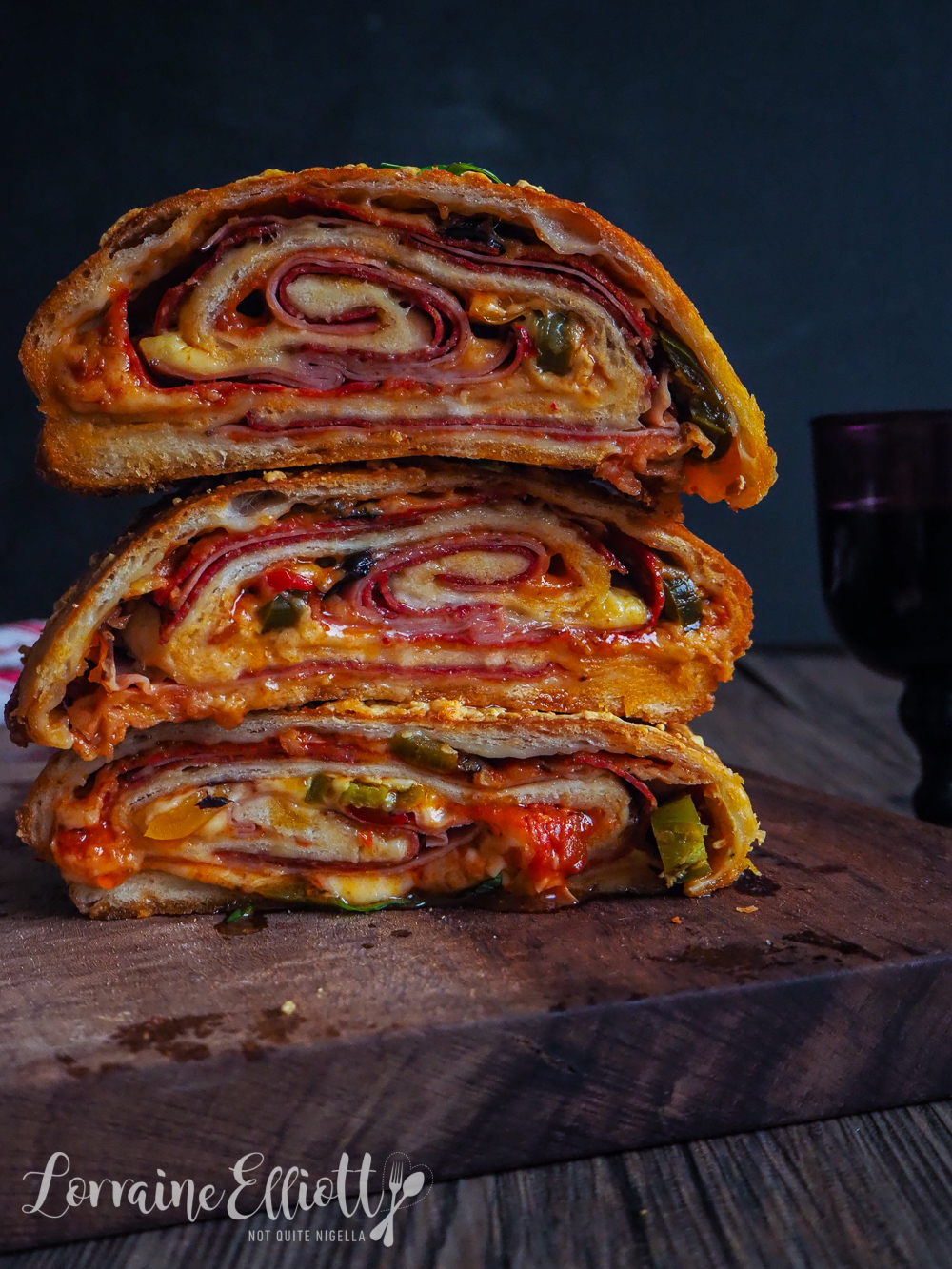 Recently I was offered a DNA testing kit in conjunction with "A Taste of Harmony" event that is an annual initiative where Australians are encouraged to share their culture at work. During two weeks in March (18-29 March) they select a day in which participants can bring a dish that represents their country or background. It's also an unusual event in that its aim is not to raise money but to raise awareness.

Understanding another culture through something like food helps breaks down barriers and one in five Australians have experienced discrimination based on their skin colour, ethnicity or religion. Mr NQN's workplace actually does it a few times a year. His background is Finnish and Spanish as well as a whole lot of interesting stuff. 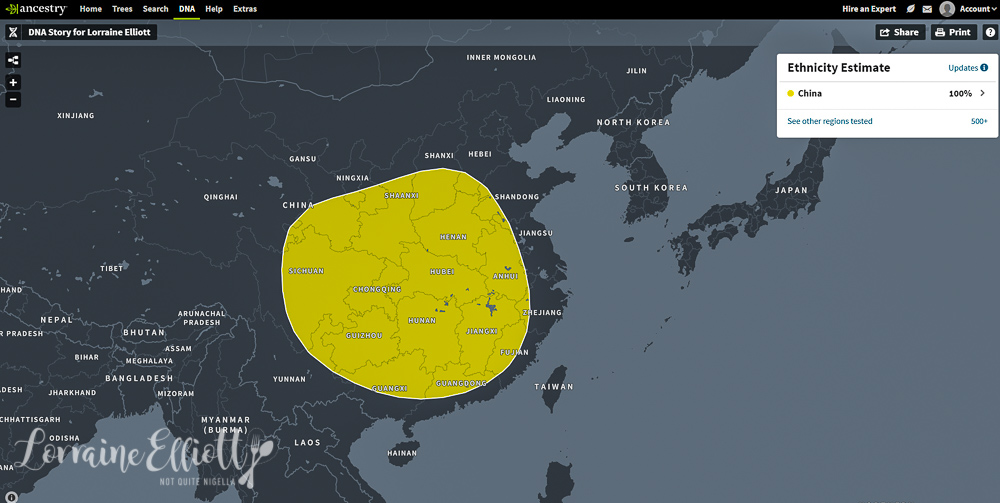 I got my DNA results back and let's just say that while he is very multicultural, I am veeeery monocultural. I got the news back that I am 100% Chinese. I sort of knew that because I had had a DNA test done before although the other company had detected some Korean and Bhutanese. This test did however narrow it to certain provinces in China including Sichuan (where perhaps I get my love of chilli) and Shanxii (with some of my favourite Chinese food). So not the most exciting result but some of my favourite food explained!

So tell me Dear Reader, do you daydream about what you want to eat? What is your background and what dish do you think best represents it? Have you ever had a DNA test? 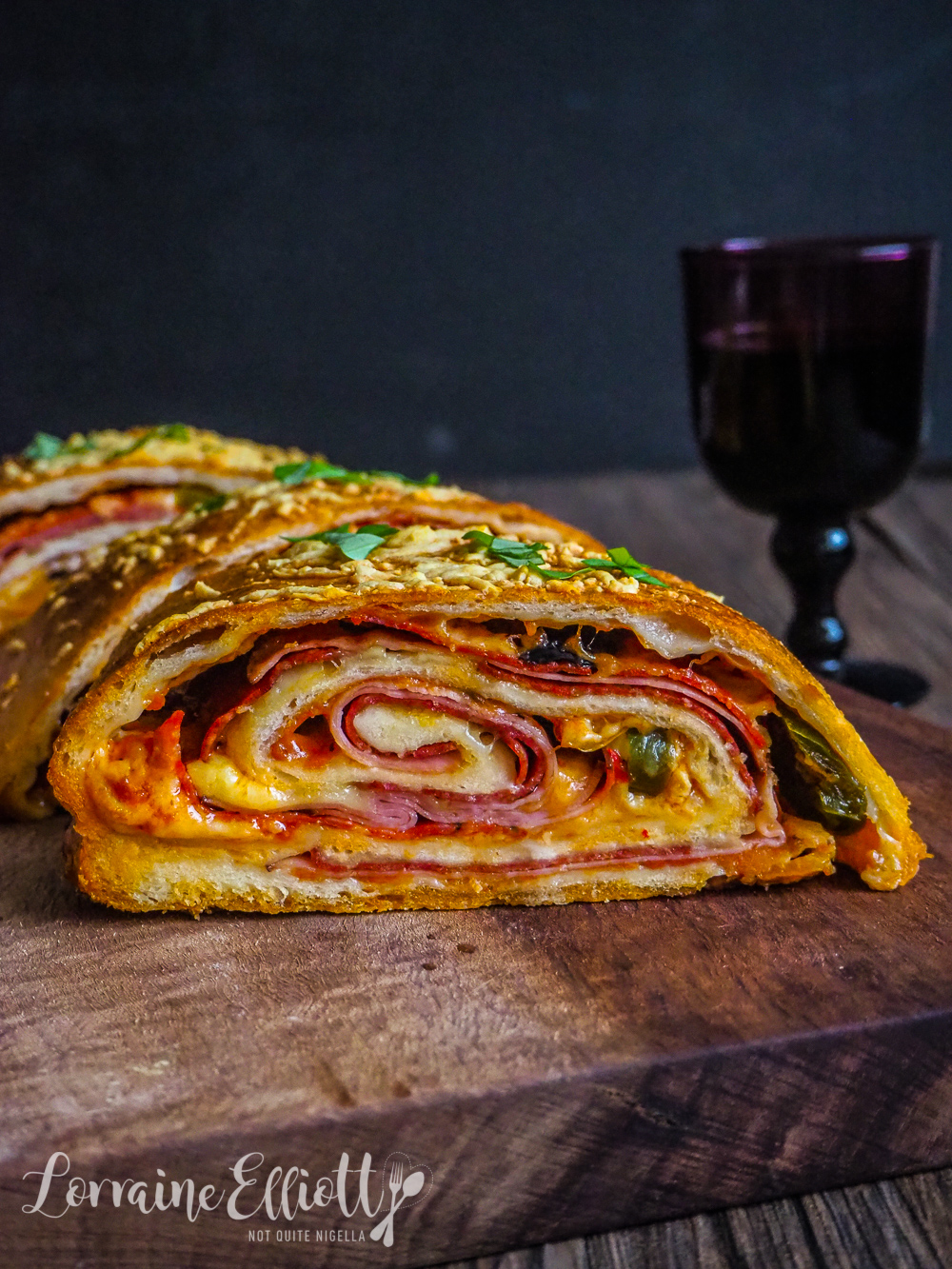 Makes 1 stromboli (tip: you may want to double this!) 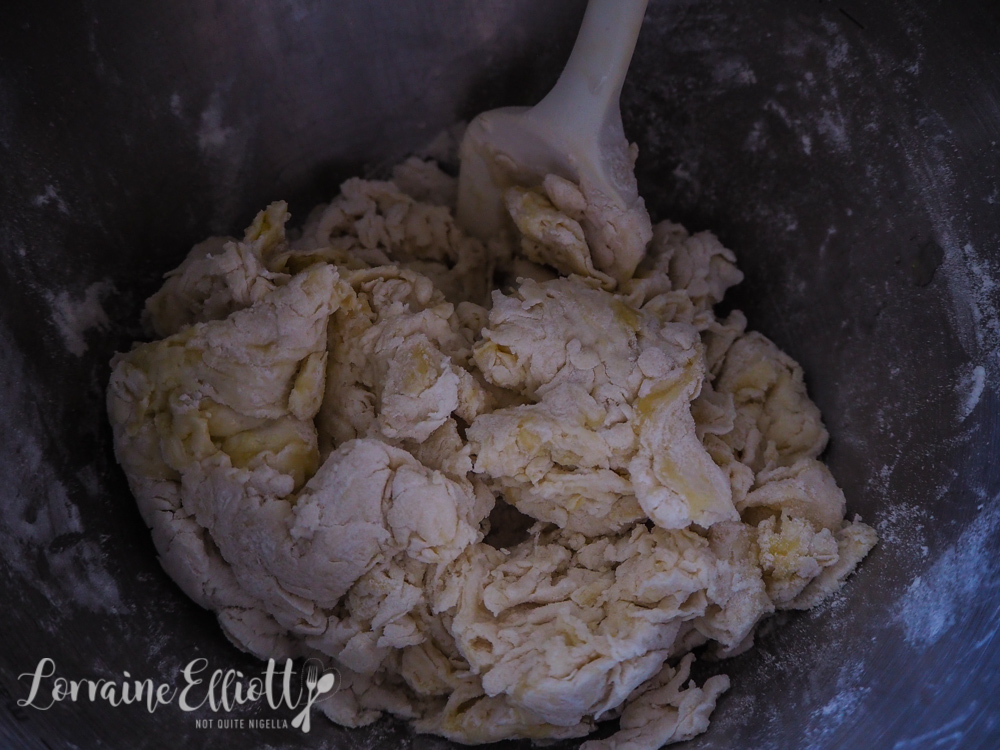 Step 1 - Mix the flour, sugar, salt and yeast together. Then mix in the olive oil and water until it becomes a shaggy mixture. Knead with a mixer for 5-6 minutes or until smooth and elastic. 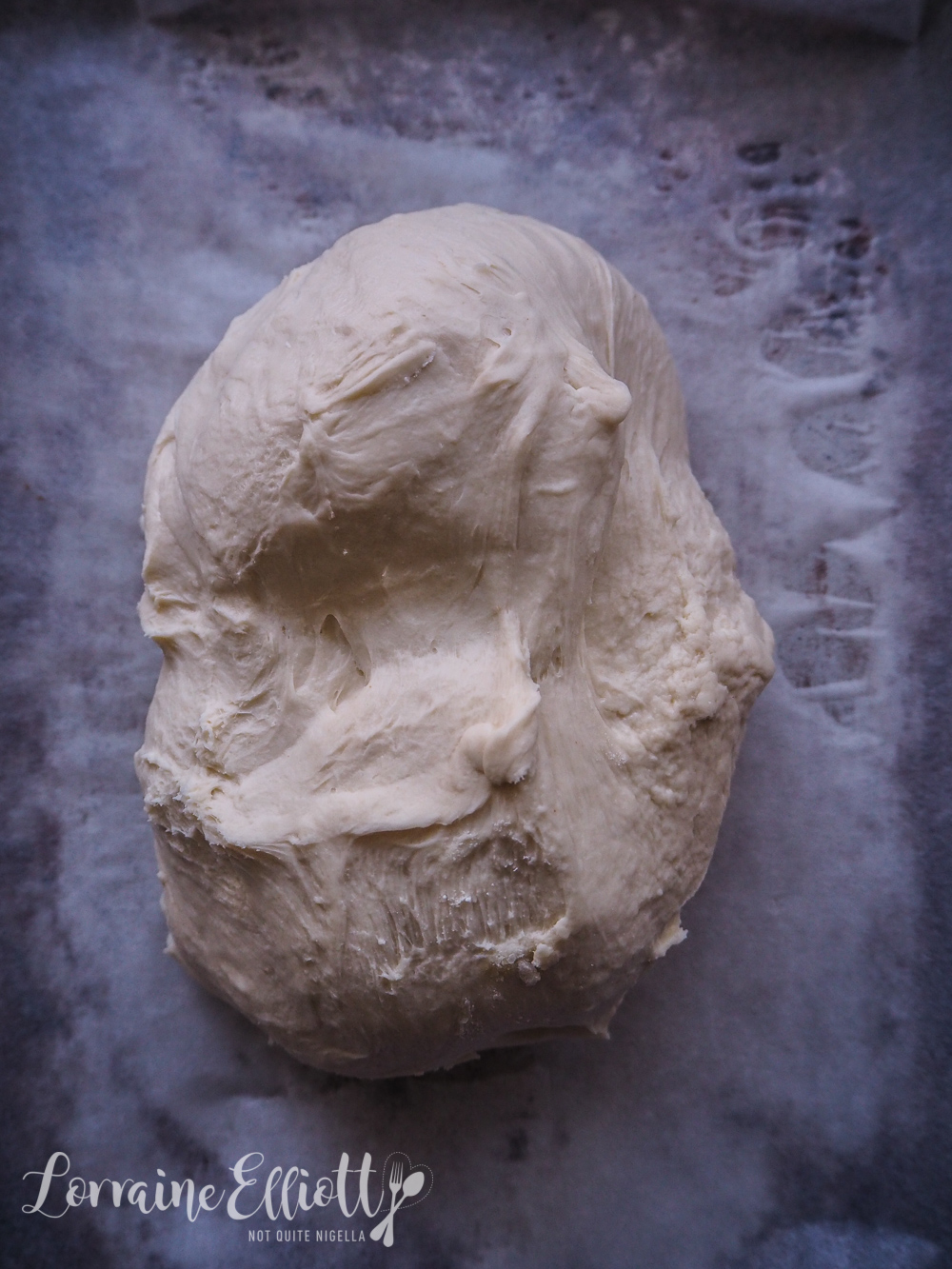 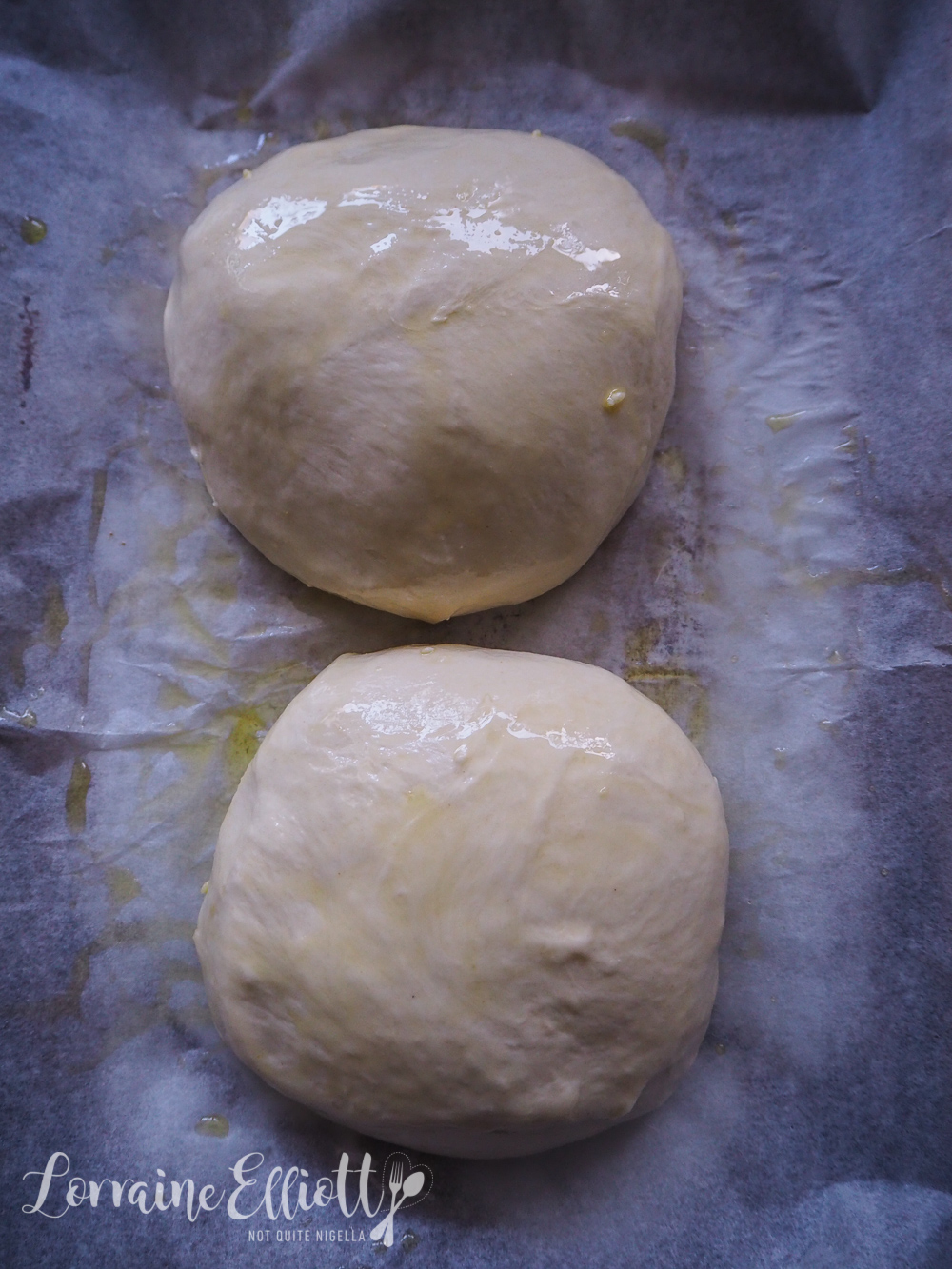 Step 2 - Shape into a round and coat with olive oil. Cover with a greased layer of cling film or zip lock bag and allow to slowly rise in the fridge overnight. 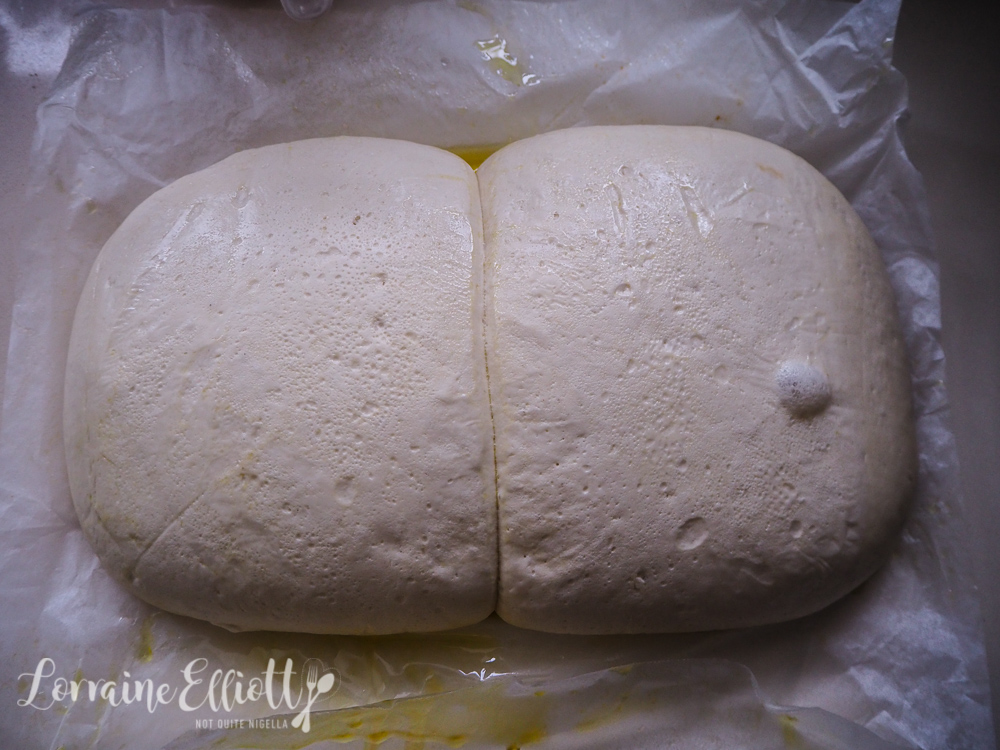 To this the next day

Step 3 - Two hours before you want to make it, take it out of the fridge and allow to rise at room temperature. 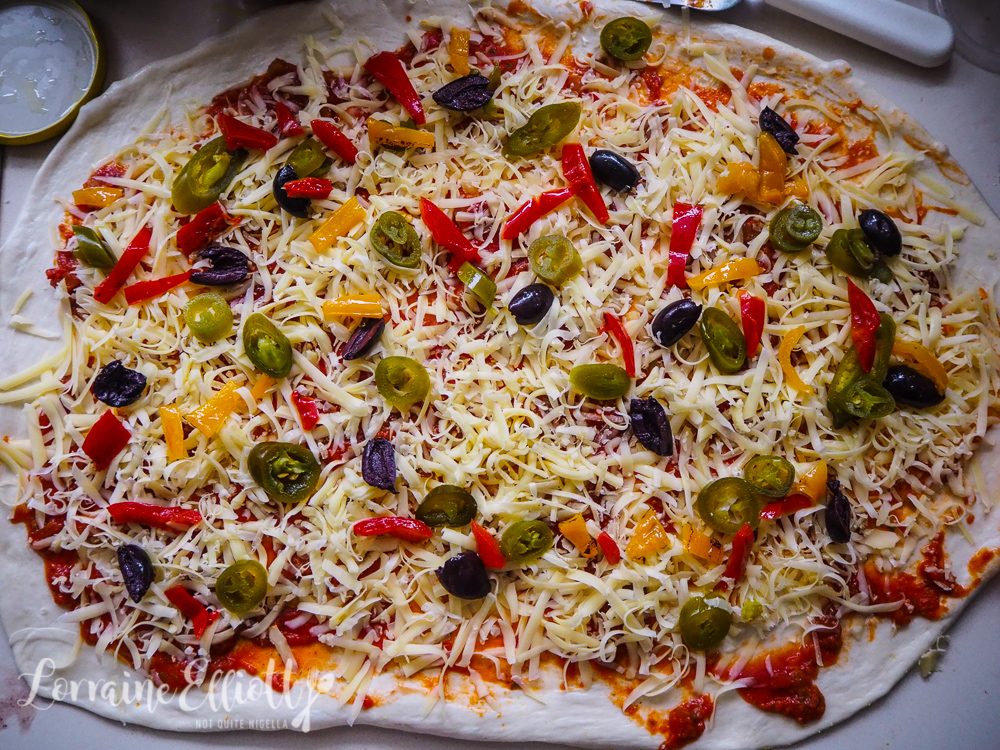 With sauce, cheeses, pickles and olives 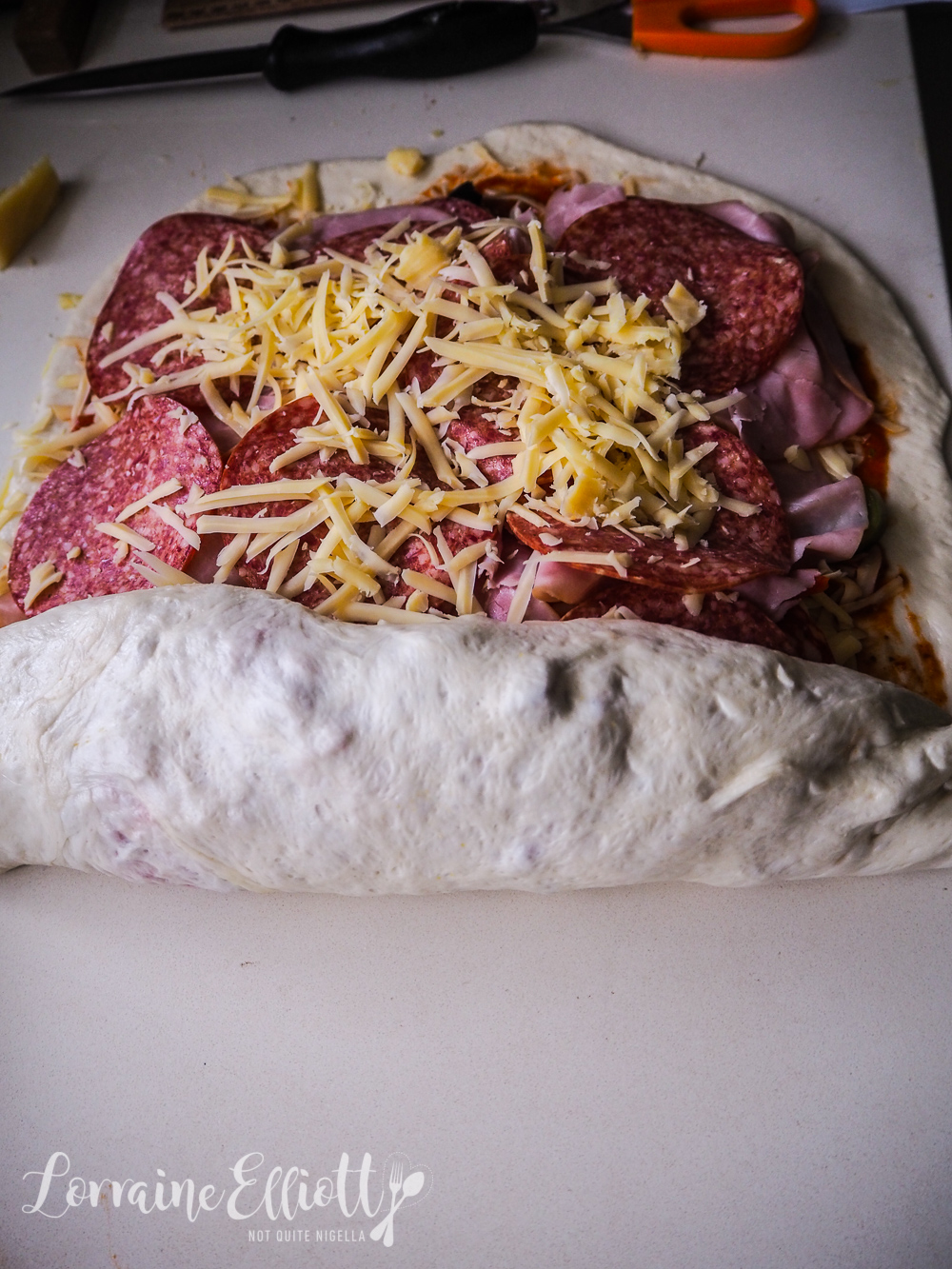 Step 5 - Spread the sauce on the dough, then add the mozzarella and parmesan cheese, capsicum, jalapenos and olives. Then add the three types of meats and then the tasty cheese. Roll up from the shorter end and then gently place on the prepared tray. Lightly slash the bread on top and brush with egg and the two tablespoons of parmesan. 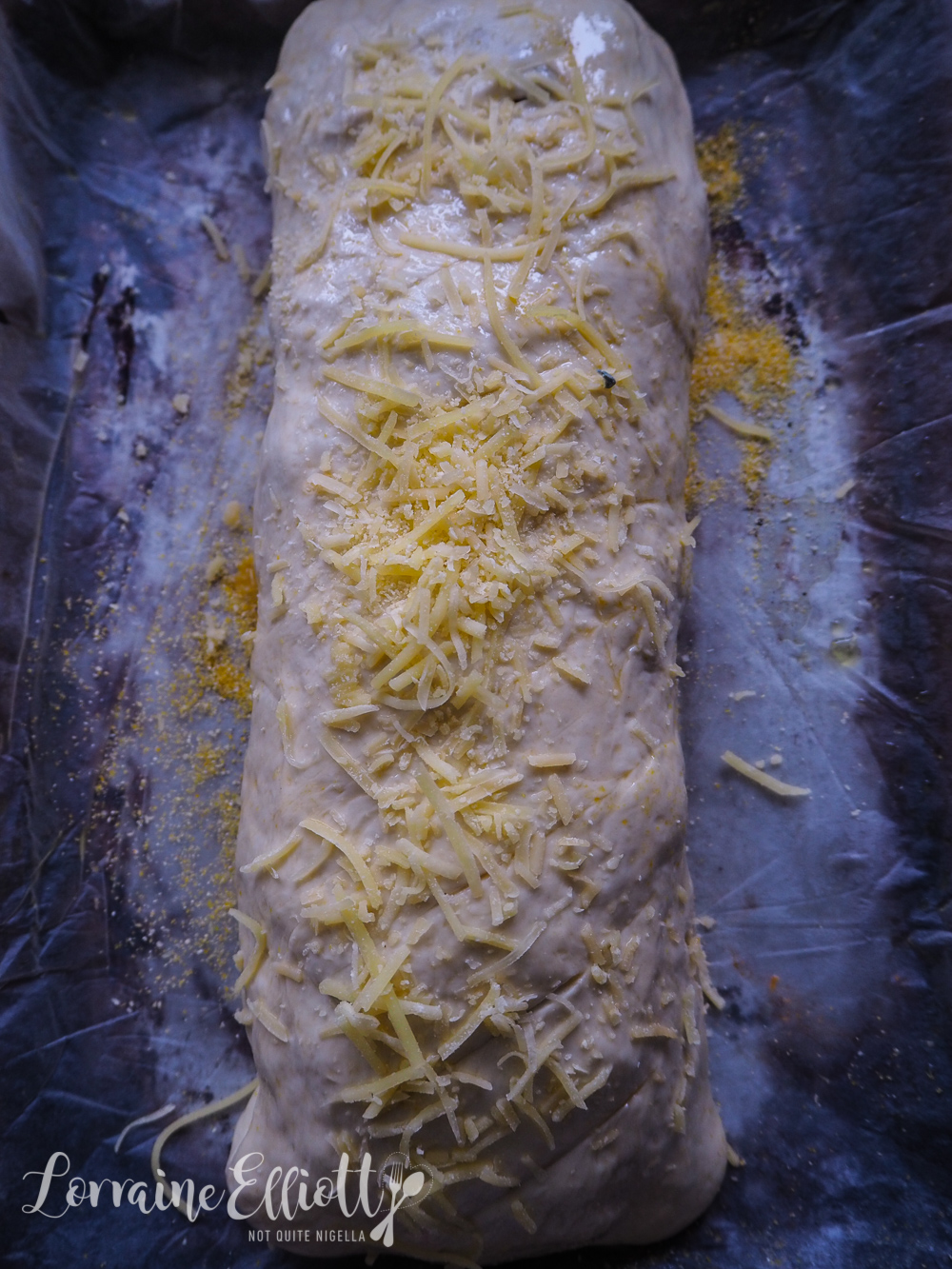 Step 6 - Bake for 15 minutes then reduce the heat to 190C/374F and bake for an additional 20 minutes. Allow to cool for 20 minutes and then slice and enjoy warm. 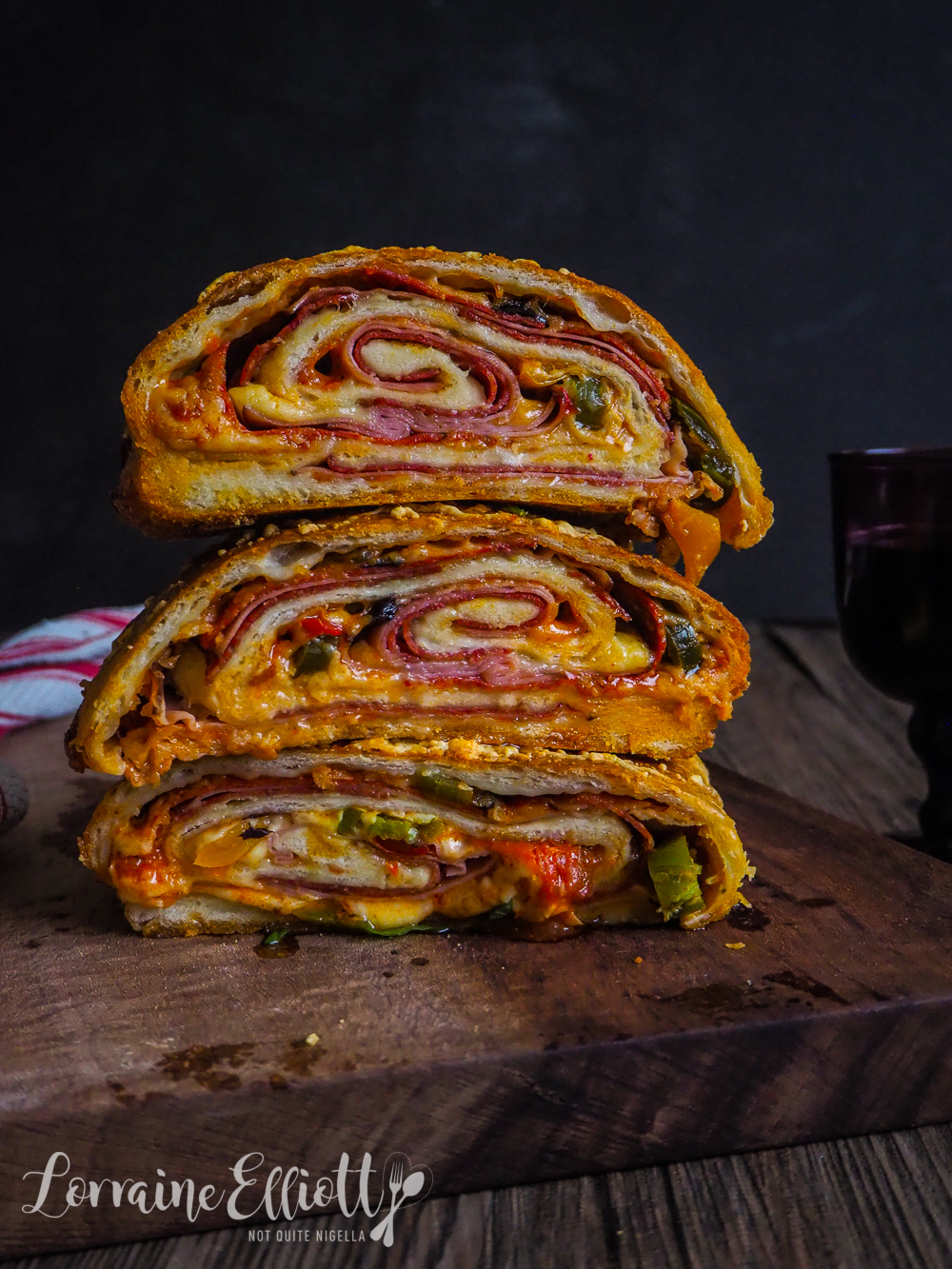