Getting Oolong At Jin's Teahouse, Newtown 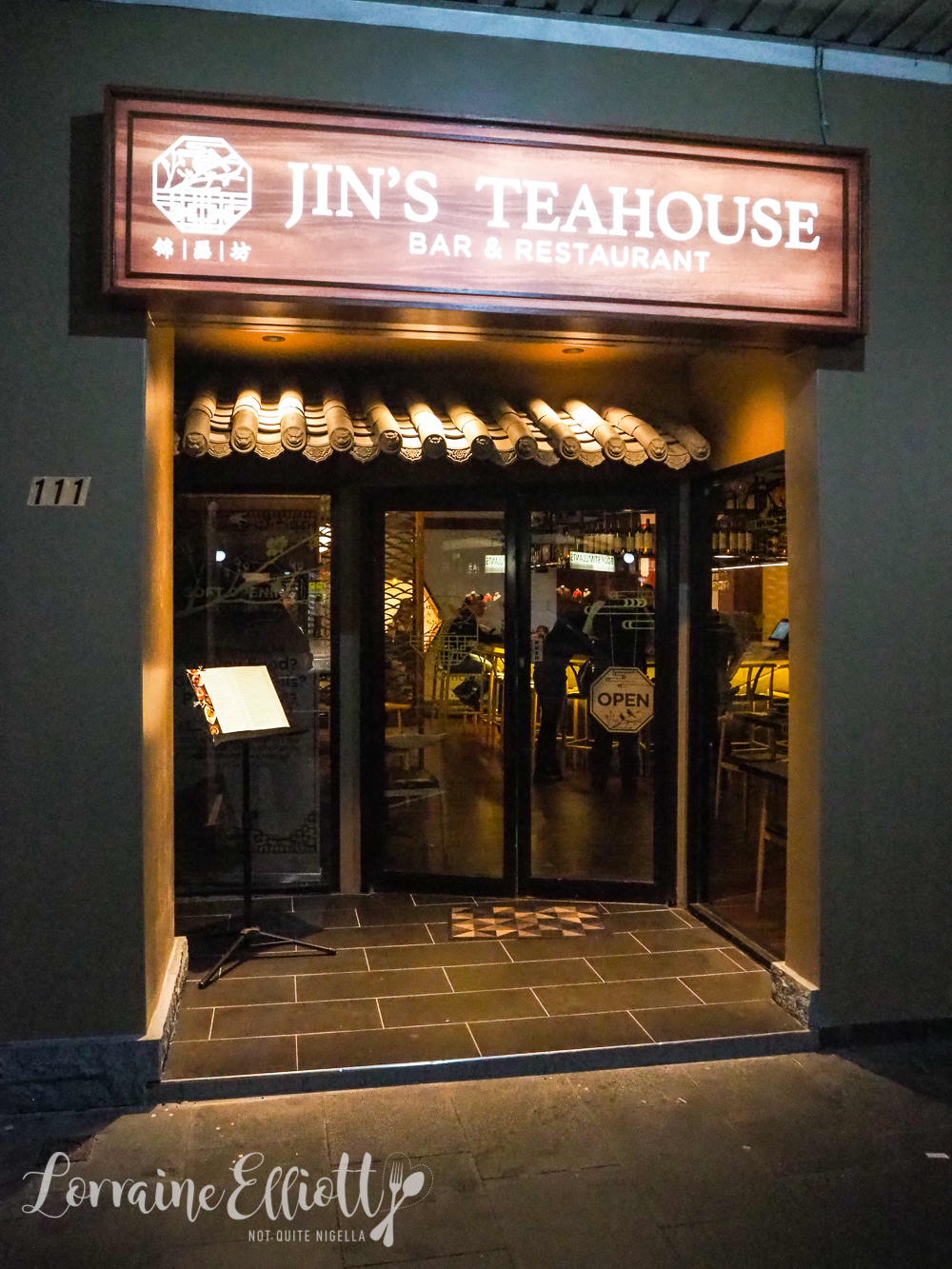 Jin's Teahouse is a Chinese restaurant on King Street in Newtown. Theatrics, smoke, haze and fire all play a part on the menu. There are modern takes on Chinese dishes incorporating ingredients like Laphoroaig whisky and ghost peppers. 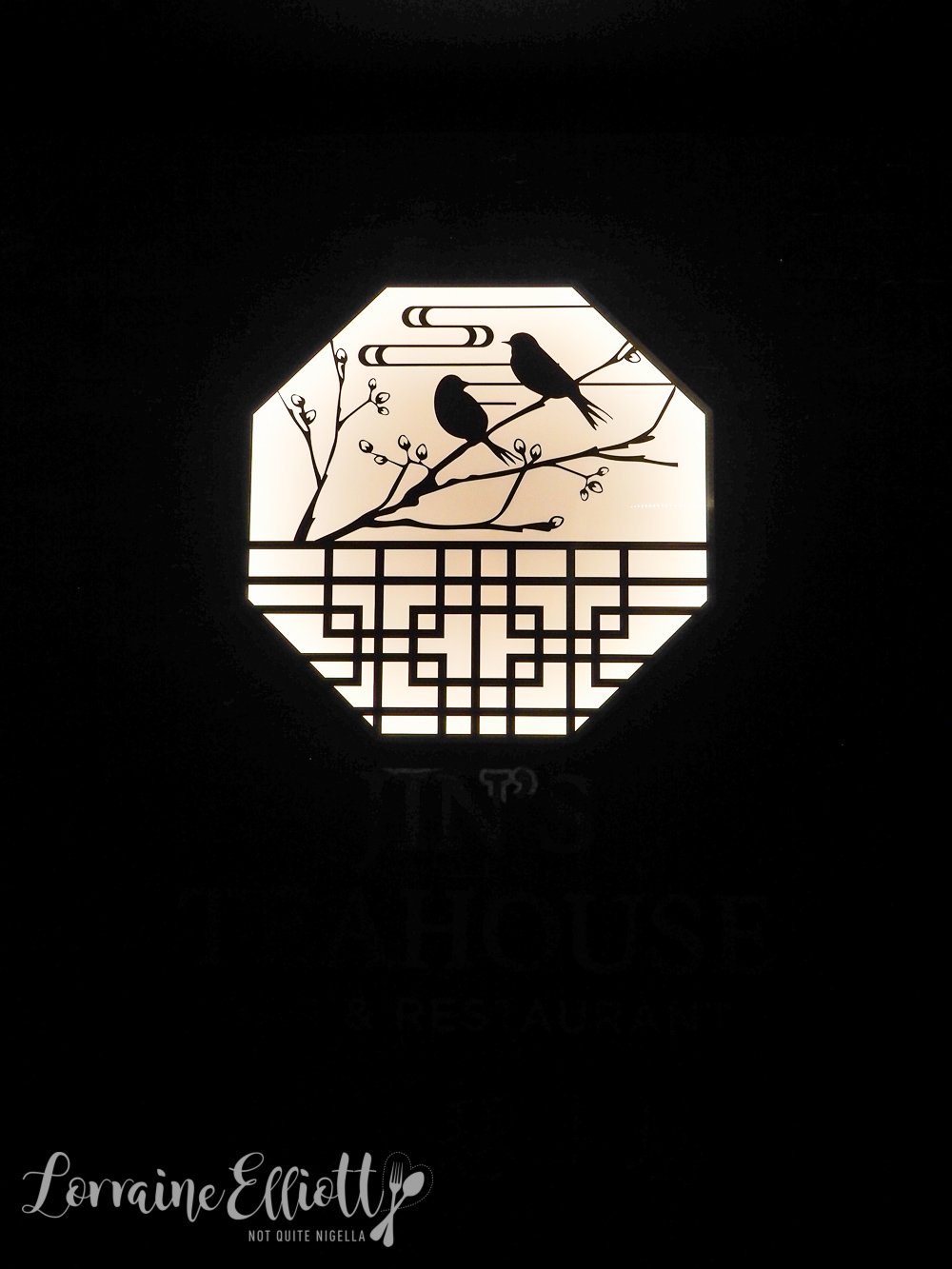 Jin's Teahouse is on the city end of King Street near Green Gourmet, Mapo Gelato and among a range of cheap and cheerful eateries. It is in the former site of Thanh Binh. The room is large with some private rooms out the back. 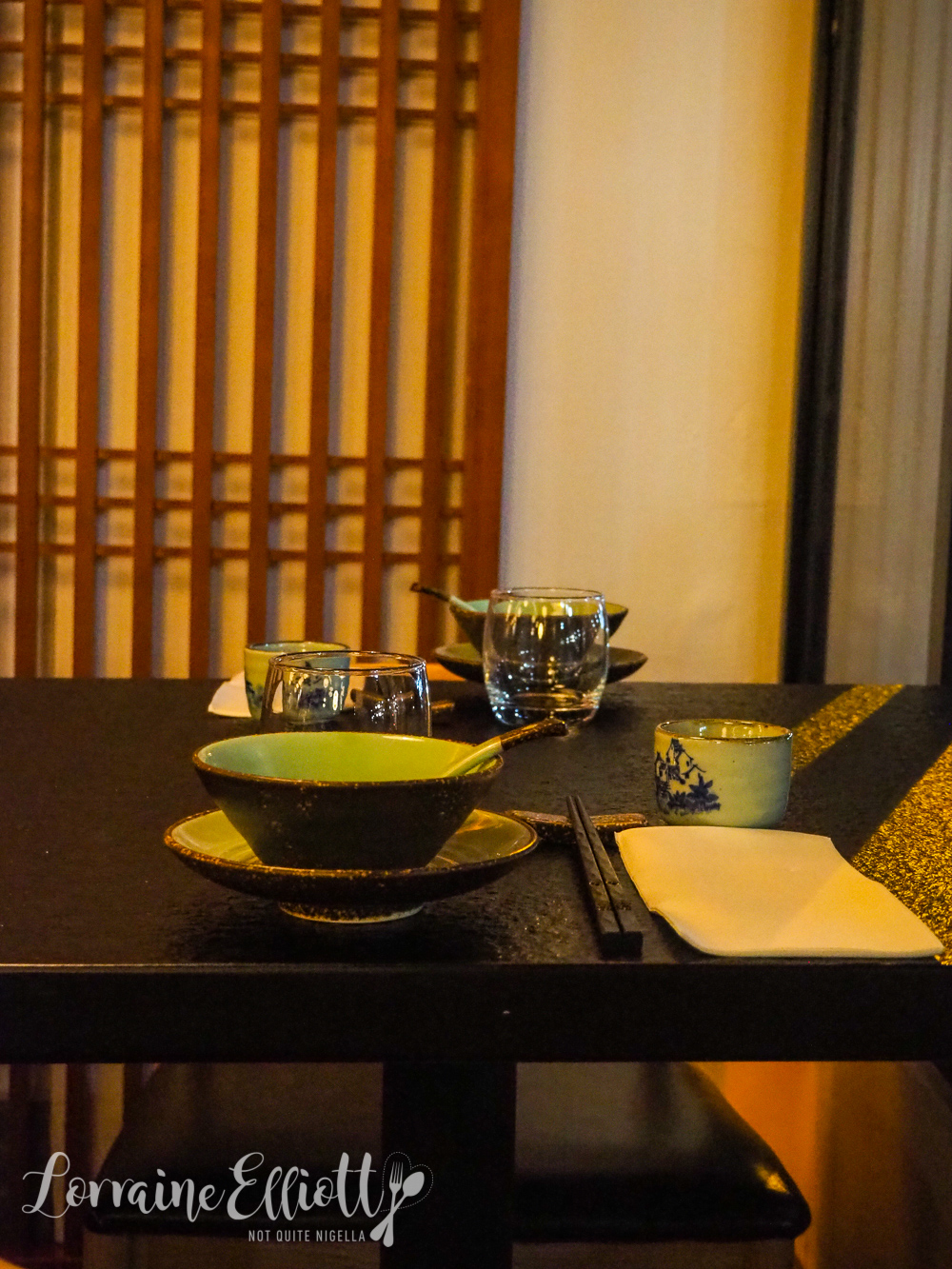 Service is friendly although quite unsure from some. For a lot of staff on the floor, there does seem to be some confusion with roles. Still the decor is nice and it's an upmarket Chinese vibe. 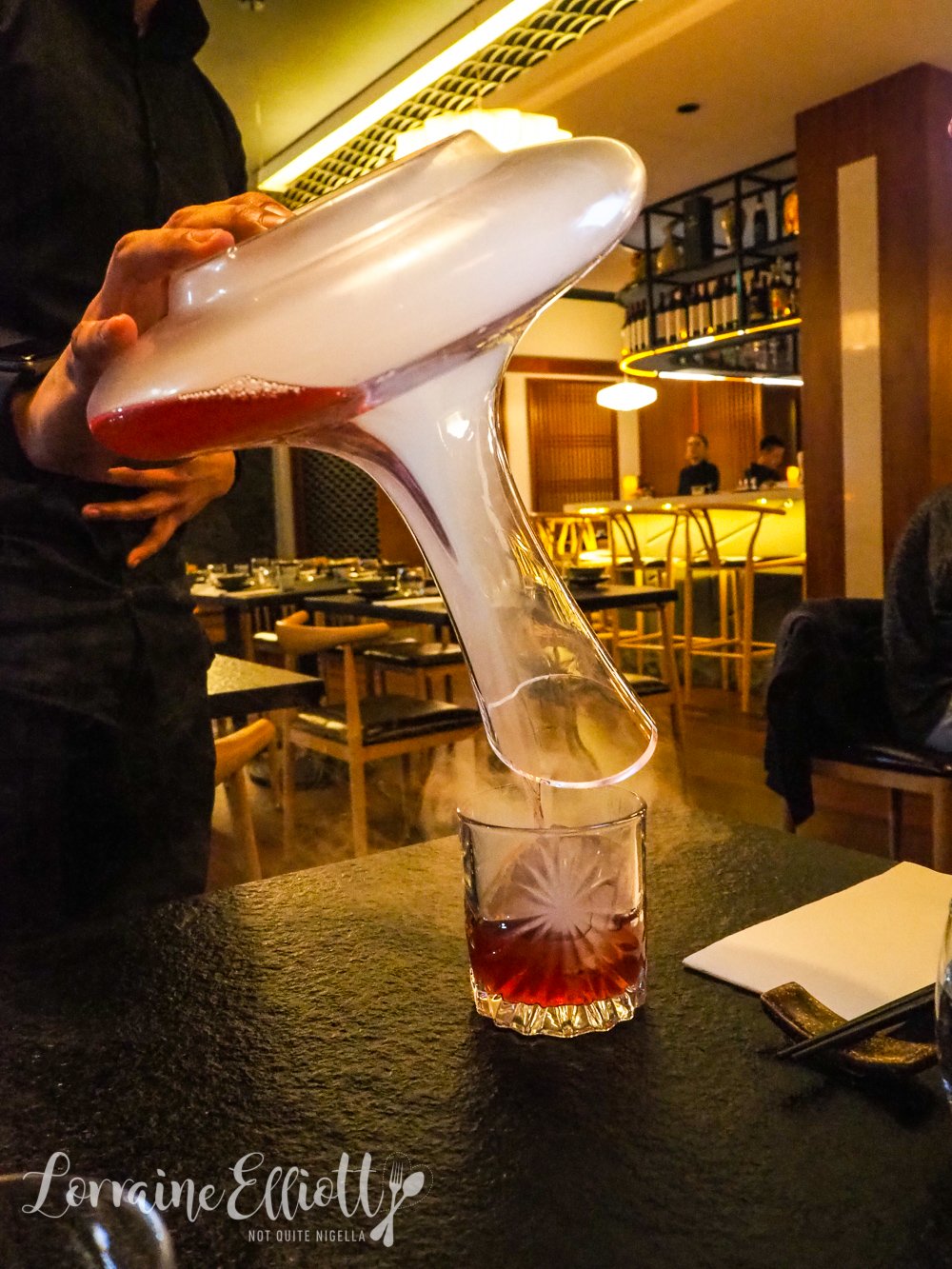 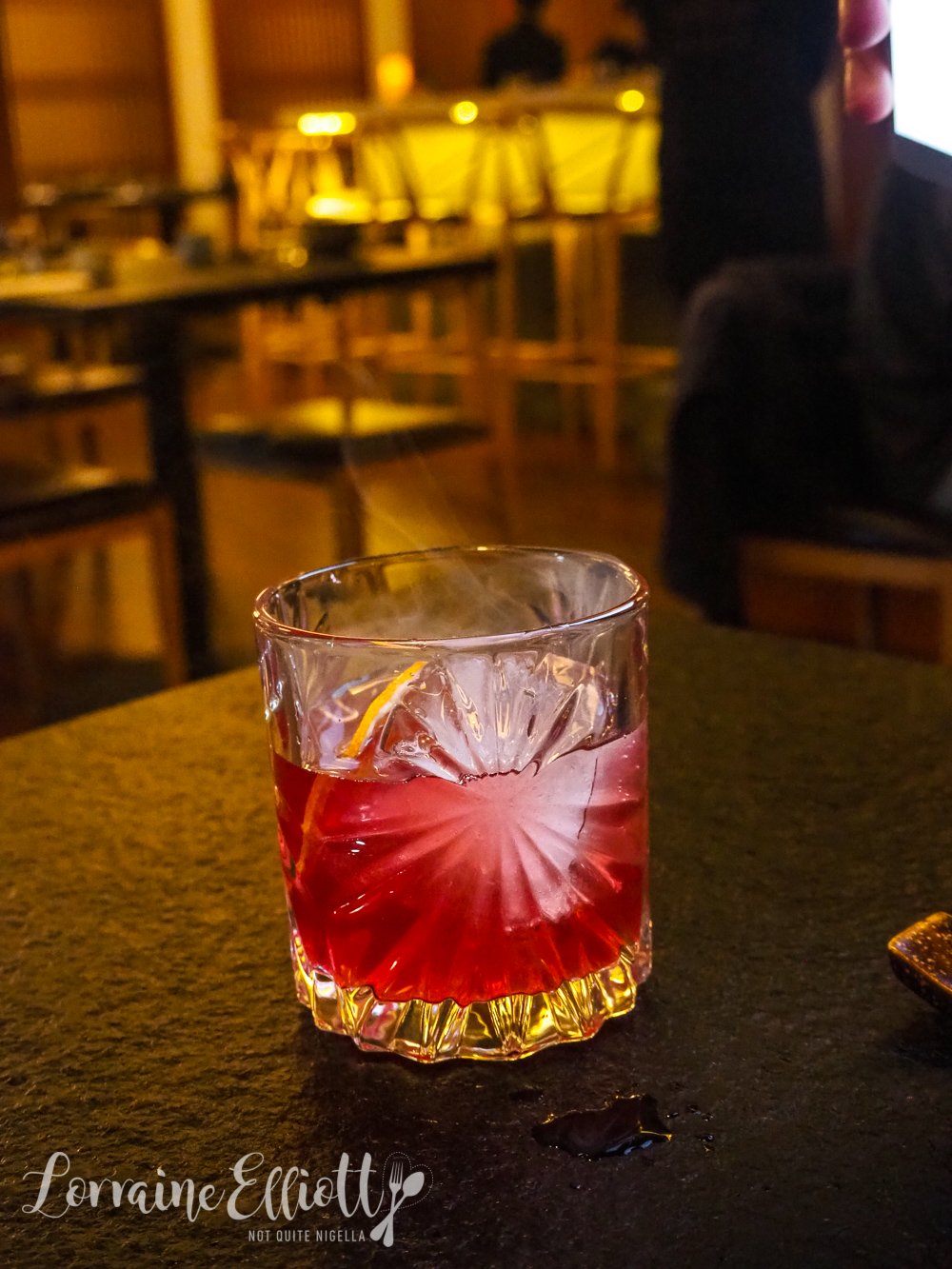 We start with drinks with a Smoking Kills cocktail for Mr NQN. It is presented poured from a wine carafe in a plume of smoke at the table. It's a mixture of gin, shiraz, dry vermouth, caramel, citrus and hopped bitters and is actually wonderfully smoky with a sweet element to it. 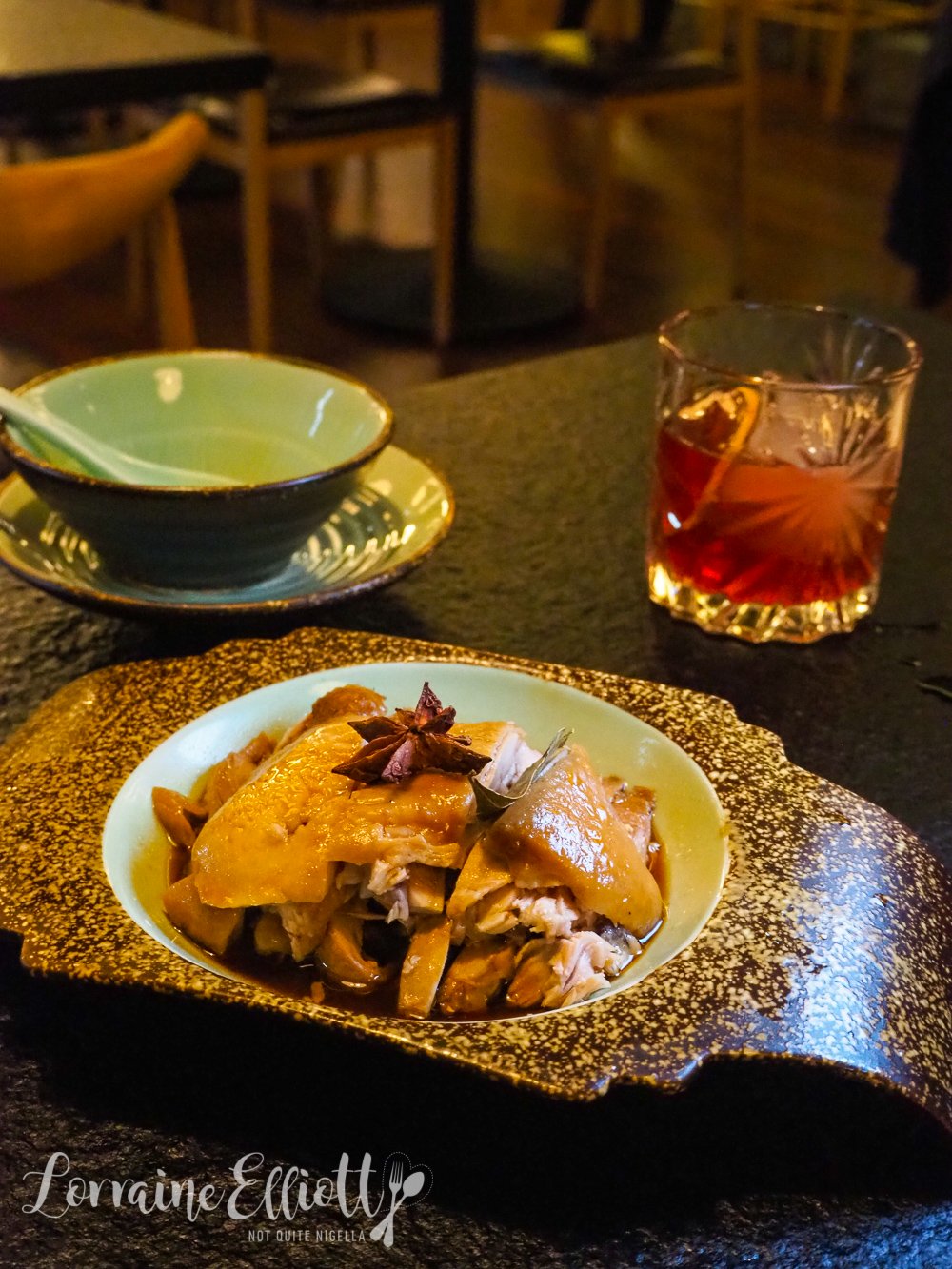 I'm slightly torn about the Laphoroaig 10 Chicken. Torn because it is delicious; the chicken is succulent and moist and the flavours are great with a nice range of spices like star anise, bay leaf, cinnamon bark and chilli. However I'm undecided because I also don't really taste the peaty intensity of the Laphoroaig 10 whisky or the Pu er tea very much at all. 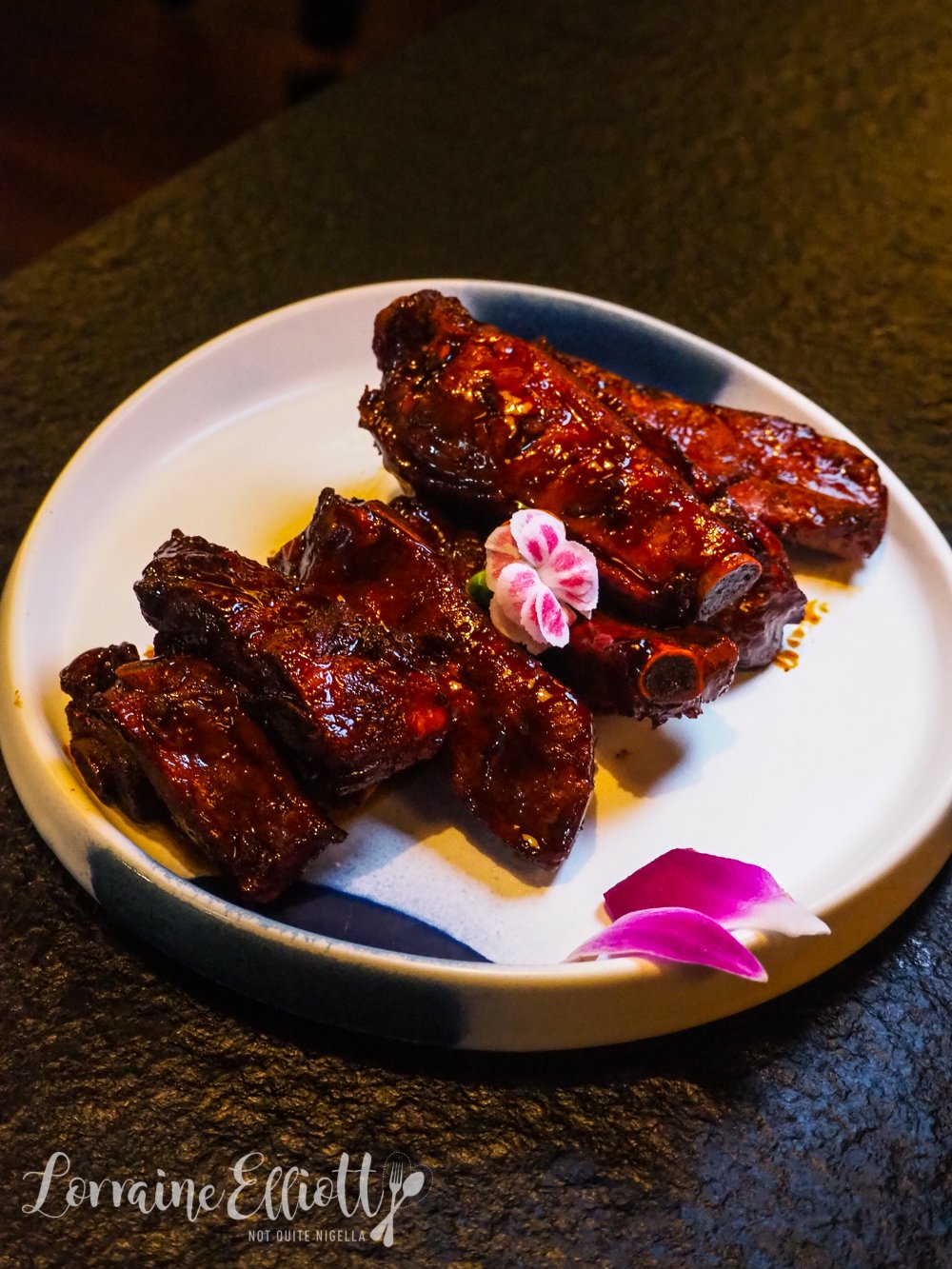 The Jin's ribs are sticky, sweet and flavoured with fried garlic and shallots. Mr NQN adores these and the plate full of his pork rib bones attests to it (I joke that I'll send his vegan mother a picture of his finished bones). The portion isn't overly large and the prices are little more expensive compared to other restaurants on King Street. 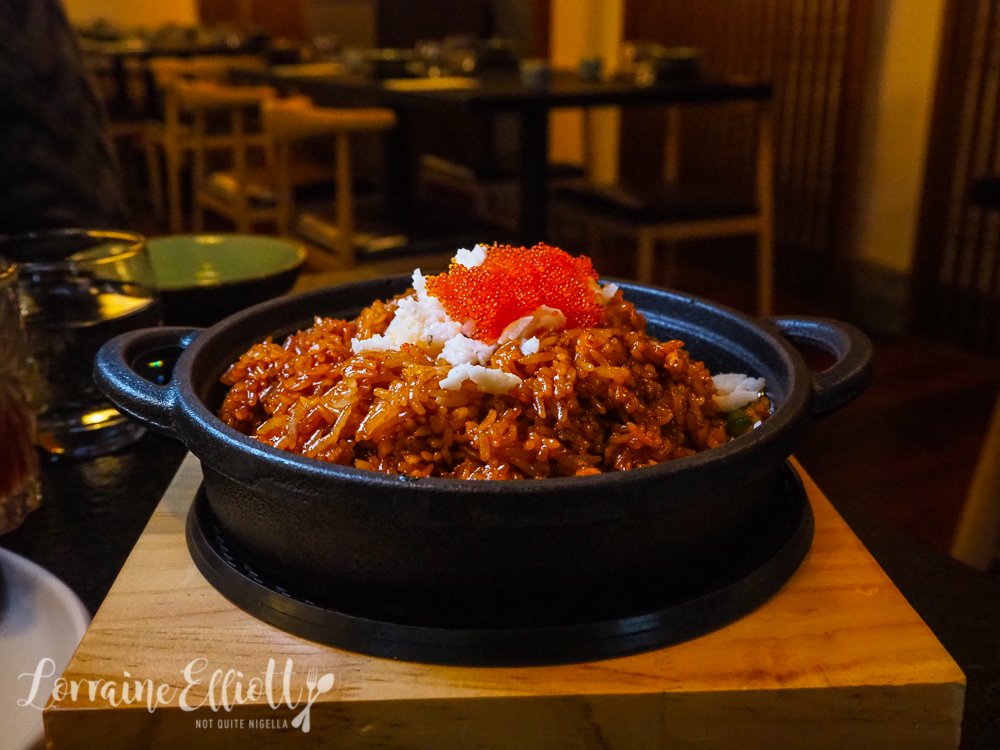 I love the fried rice with flecks of king crab meat, spanner crab, tender asparagus, flying fish roe and ginger. There's a lot of flavour in this fried rice so that it can be eaten alone too. 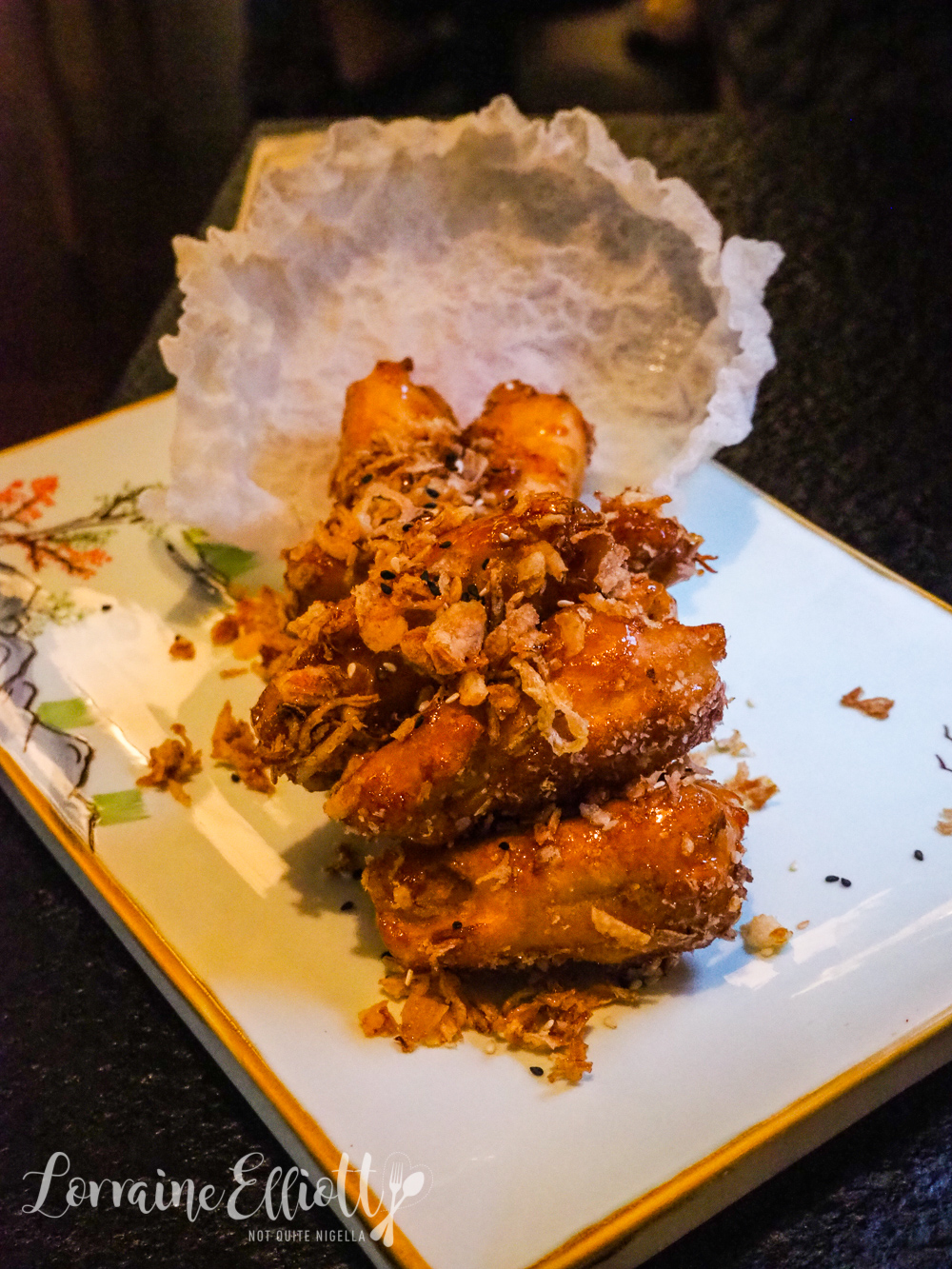 I was tossing up between the eggplant or the prawns but we saw the prawns go to another table and Mr NQN remarked that it looked like the dish consisted of two prawns so he didn't want to order it. Our waitress strongly recommended the eggplant to us. It's batons of eggplant battered and deep fried with plenty of fried shallots on top. It's very good (although deep friend eggplant batons generally are a safe bet to be tasty and delicious). 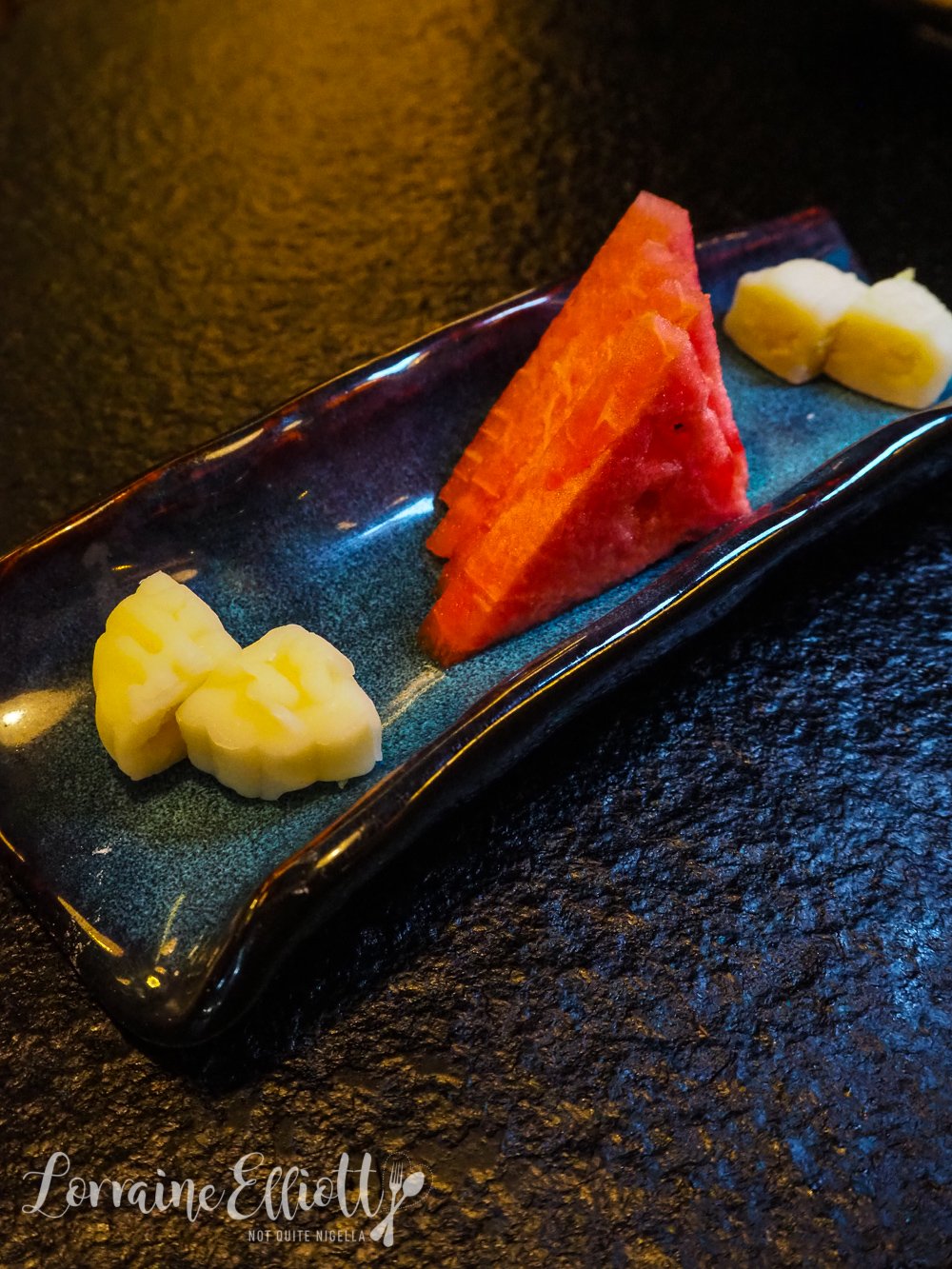 Since it is moon festival during our visit (a festival to celebrate the end of the summer harvest and nature's bounty), they bring out some snowskin mochi mooncakes and fruit which is a nice gesture. 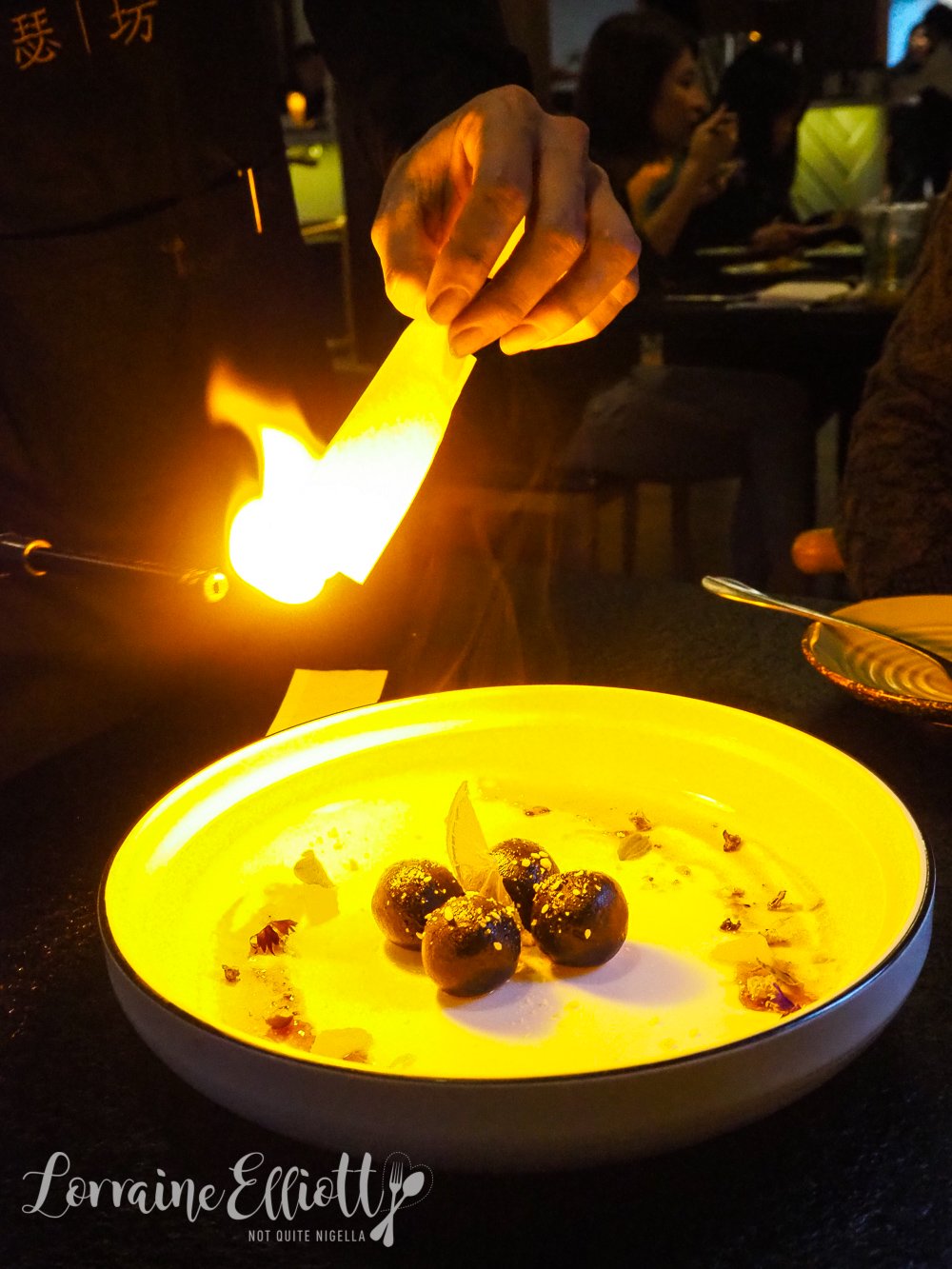 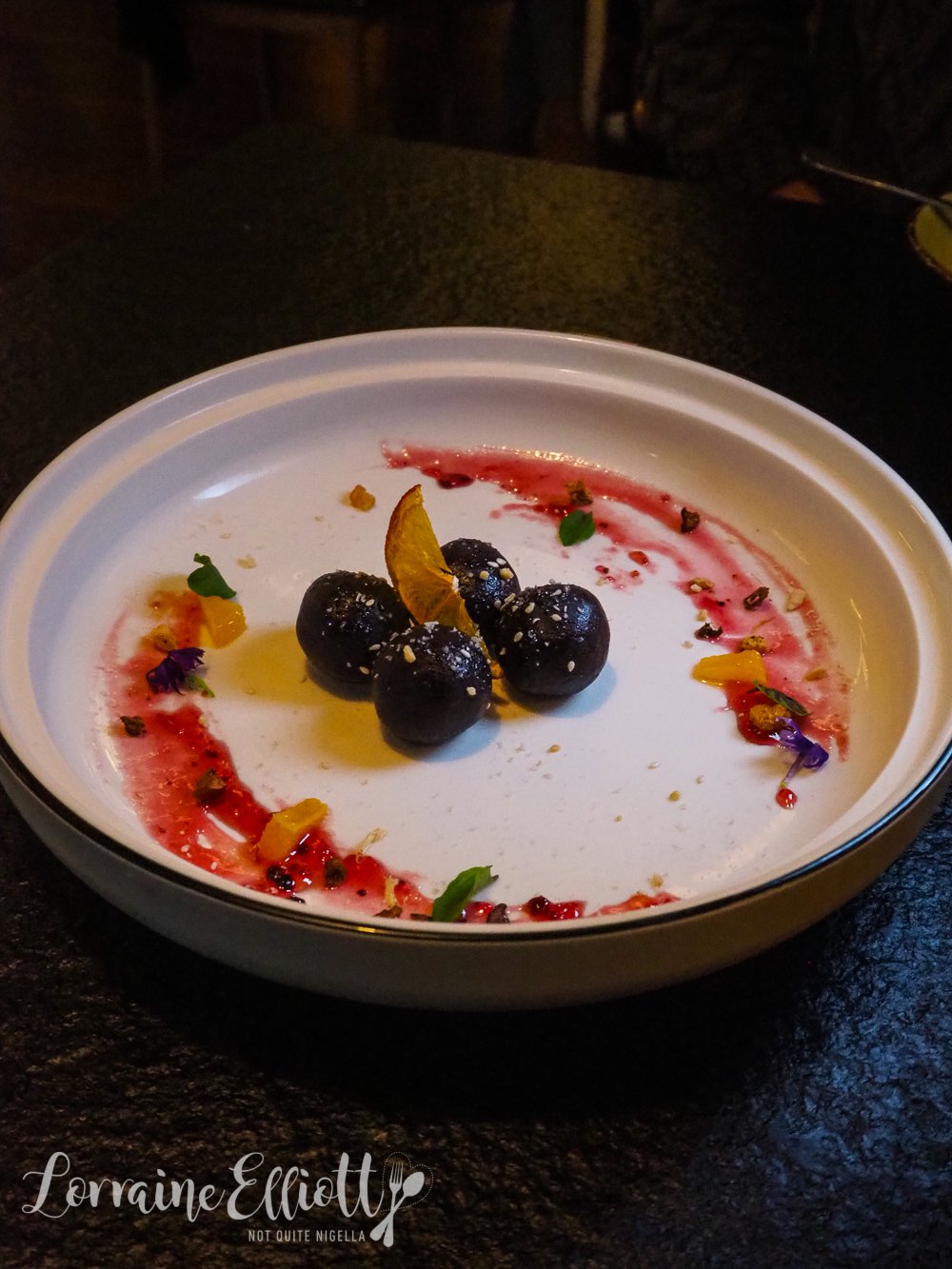 While we really enjoyed the mains, the dessert is a hard no for both of us. In fact after taking one bite I left the rest of it because I don't want to waste calories on it (not when Mapo's fior de latte gelato is a couple of doors away). I'm not sure if it was a miscommunication with the staff because there were five flavours mentioned on the menu but our waitress didn't ask us which one we wanted and we were given chocolate (literally my last choice given there were much better flavours like black sesame, white sesame, coconut and peanut). These balls come to the table with two scraps of paper which they light and they disappear in a flash-that's the magic bit. And that's about the most interesting thing as they are not sweet and they're odd, so very odd.

So tell me Dear Reader, do you stop eating something if you don't enjoy it so that you don't waste calories on it? Do you like theatrics with your food?