Broth, Where Art Thou? Hansang, Strathfield 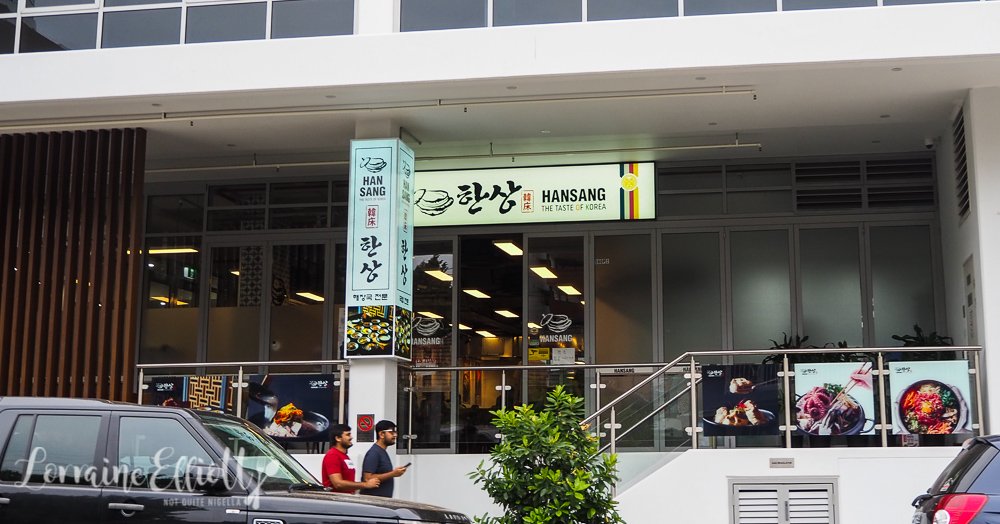 Hansang in Strathfield is all about the broth. Enormous vats of 72 hour beef bone broth that sits there bubbling away behind the glass. With an enormous hot pot and soup menu this new Korean restaurant has already amassed quite a following. 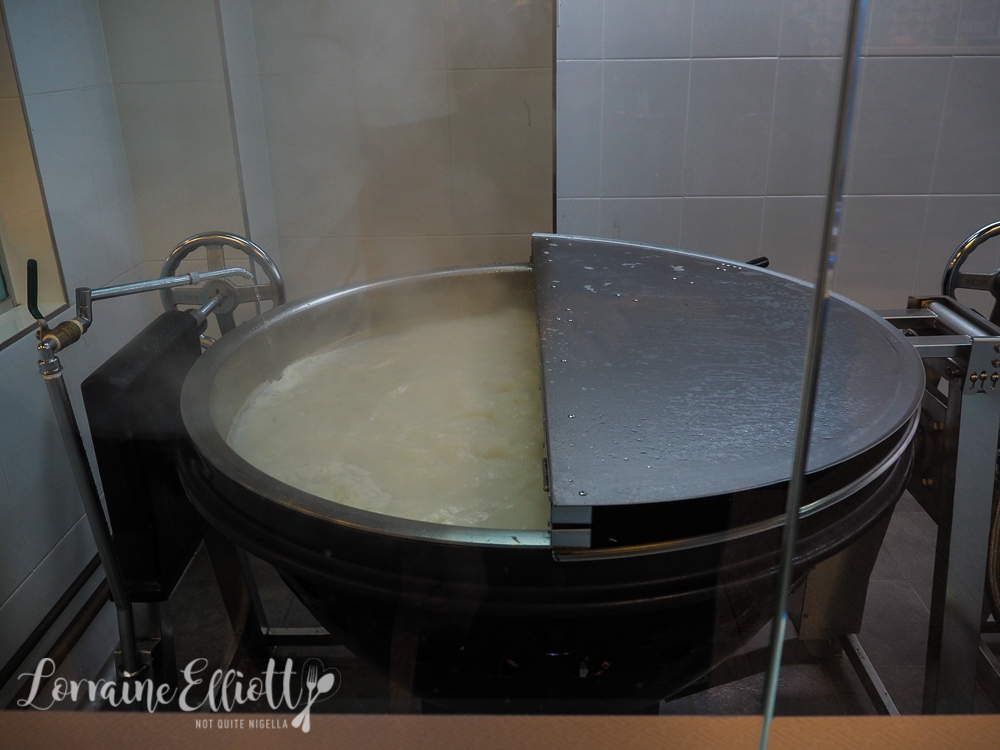 After some confusion, we finally made it to Hansang. You see there's a Hangang and a Hansang both in Strathfield. We make a booking here and Ivy and Mr NQN are the only Caucasian people in the restaurant. Hansang means a table of food and if I can offer one tip it's to get a big table because you get 10 types of banchan (complimentary side dishes). 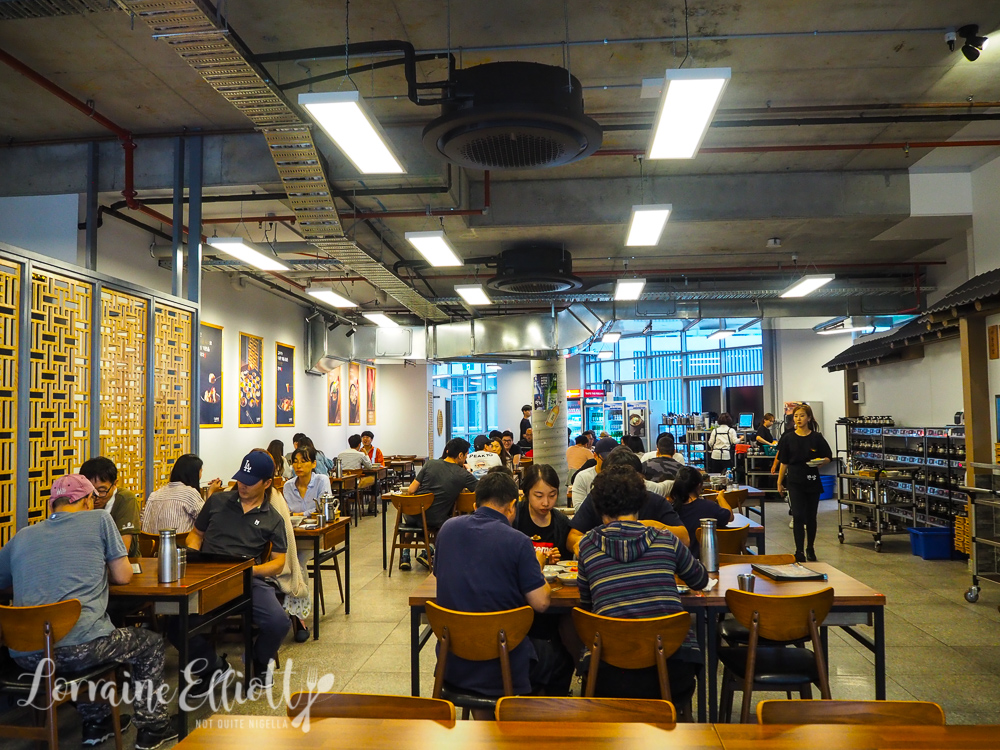 Service is sort of basic, they show you to your table and take your order and because we don't speak Korean the interaction is minimal although we have a host of questions about the place. To get cutlery, slide open the drawer on the side to get napkins, chopsticks and spoons. 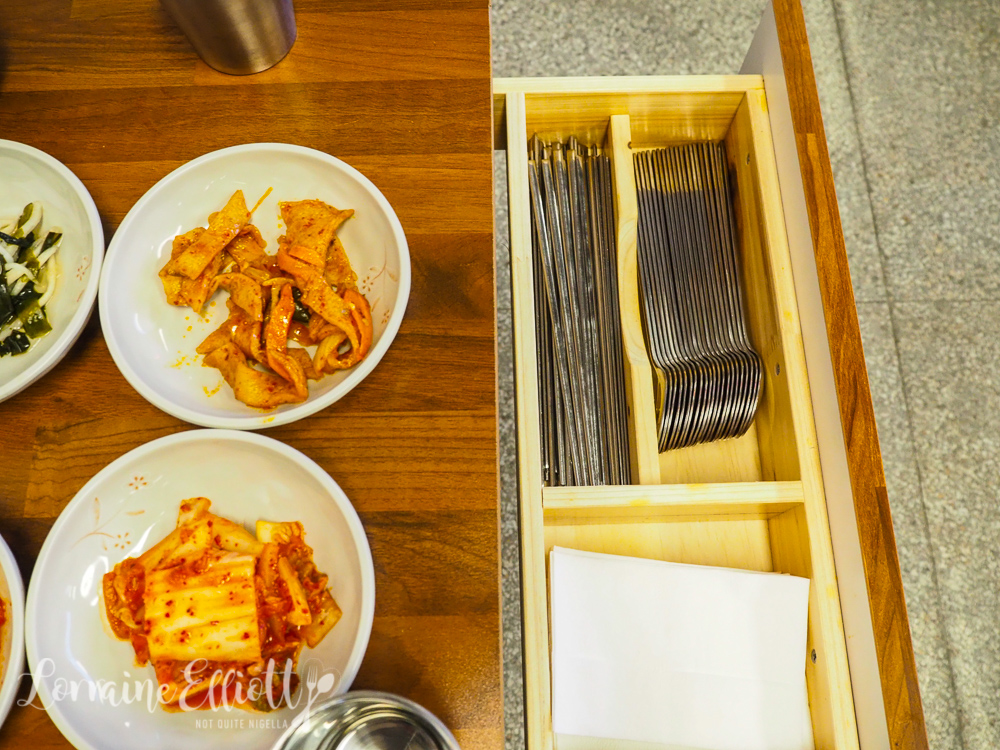 I first heard about Hansang from Celia. It's a relatively new restaurant only a few months old and her son and his fiancé live nearby and found it. I came armed with a list of three of her recommendations, two single pots and one gigantic hot pot. 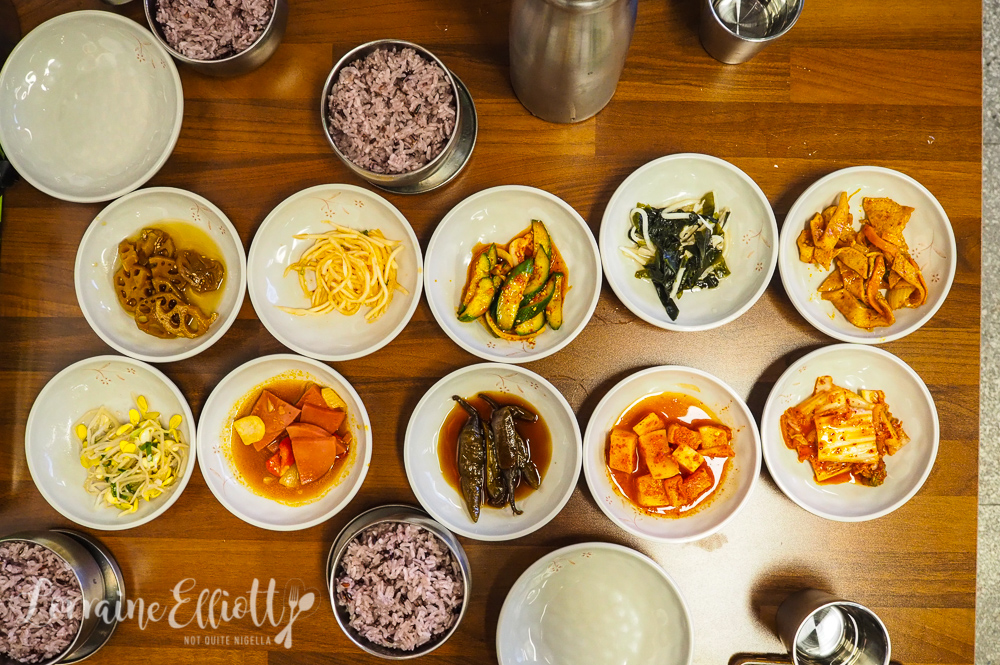 The banchan or side dishes arrive and I'm not going to lie when I say that this is one of my favourite part of a Korean meal. I love pickles and vegetables and these certainly do the job of stimulating the appetite. My favourite is the fish cakes which are sweet and spicy and I love eating this with the slightly sticky purple rice (called black rice but in reality purple). The daikon and cabbage kim chi are also popular and I really like the lotus root banchan too with the sweet soy sauce and the whole chillies. 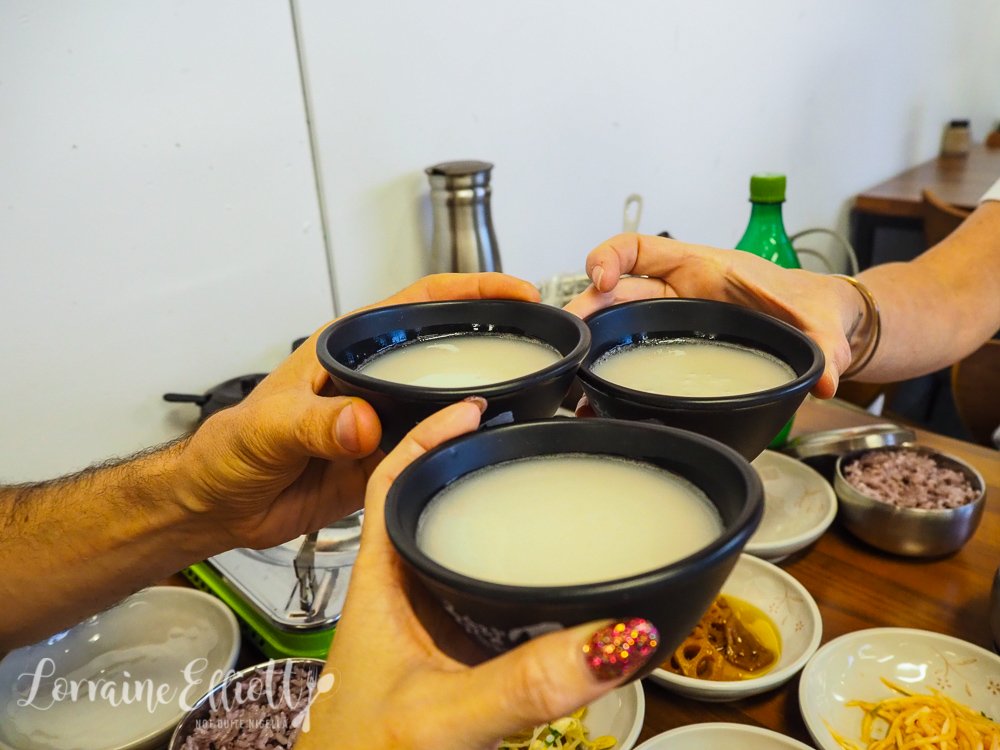 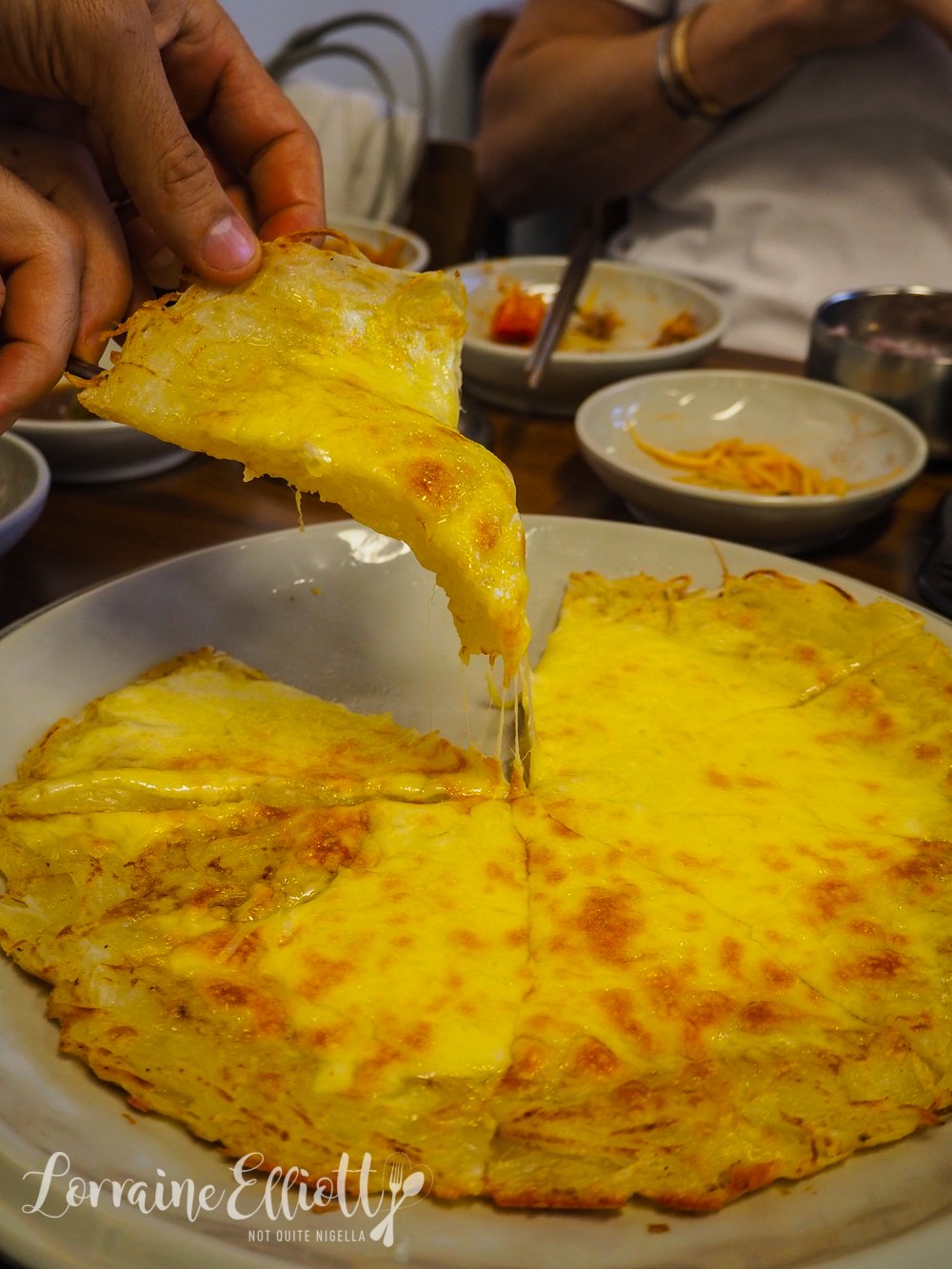 Ivy and I ordered we were waiting for Mr NQN to arrive and while we usually order the shrimp and leek pancake, the potato and cheese one caught our eye. It has a slightly chewy texture, like mochi so perhaps potato flour is used in it along with grated potato and there's a layer of melted cheese on top. It looks like a pizza at first and you dip it in the seasoned soy sauce on the side. It's delicious and Mr NQN is rather smitten with it devouring 3/4 of this. 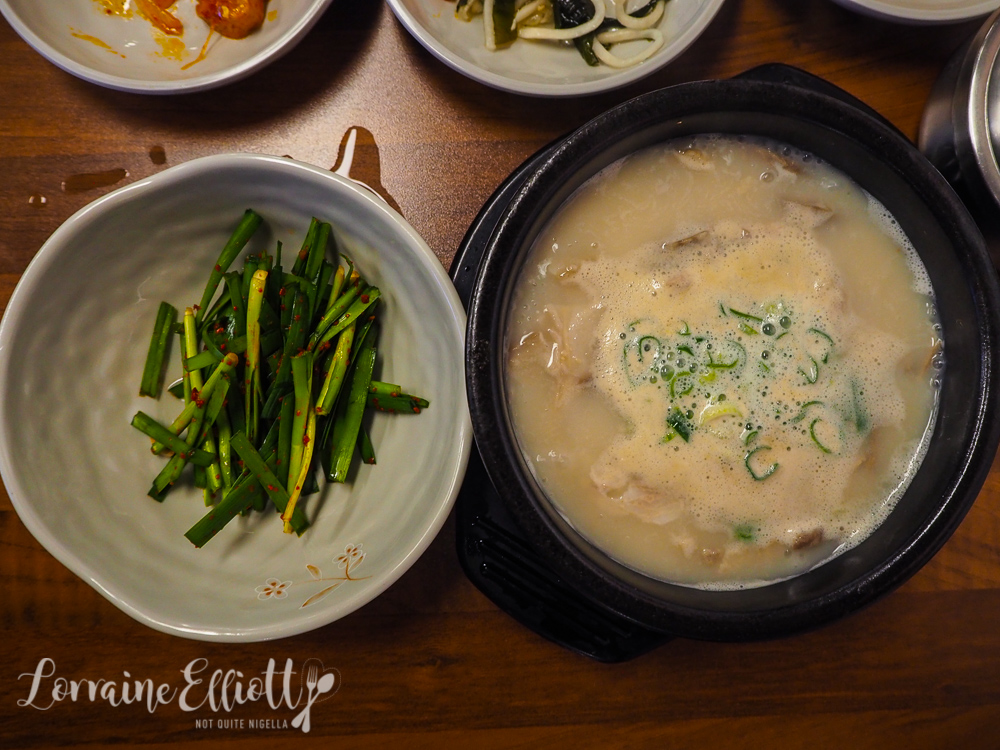 The first soup to arrive is the pork soup with a milky rich broth and slices of tender pork. It's mild and comforting, the sort of soup that you might want on a cold day (fortunately for us, it's an unseasonably cold summer's day today). It comes with a bowl of chilli garlic chives on the side. 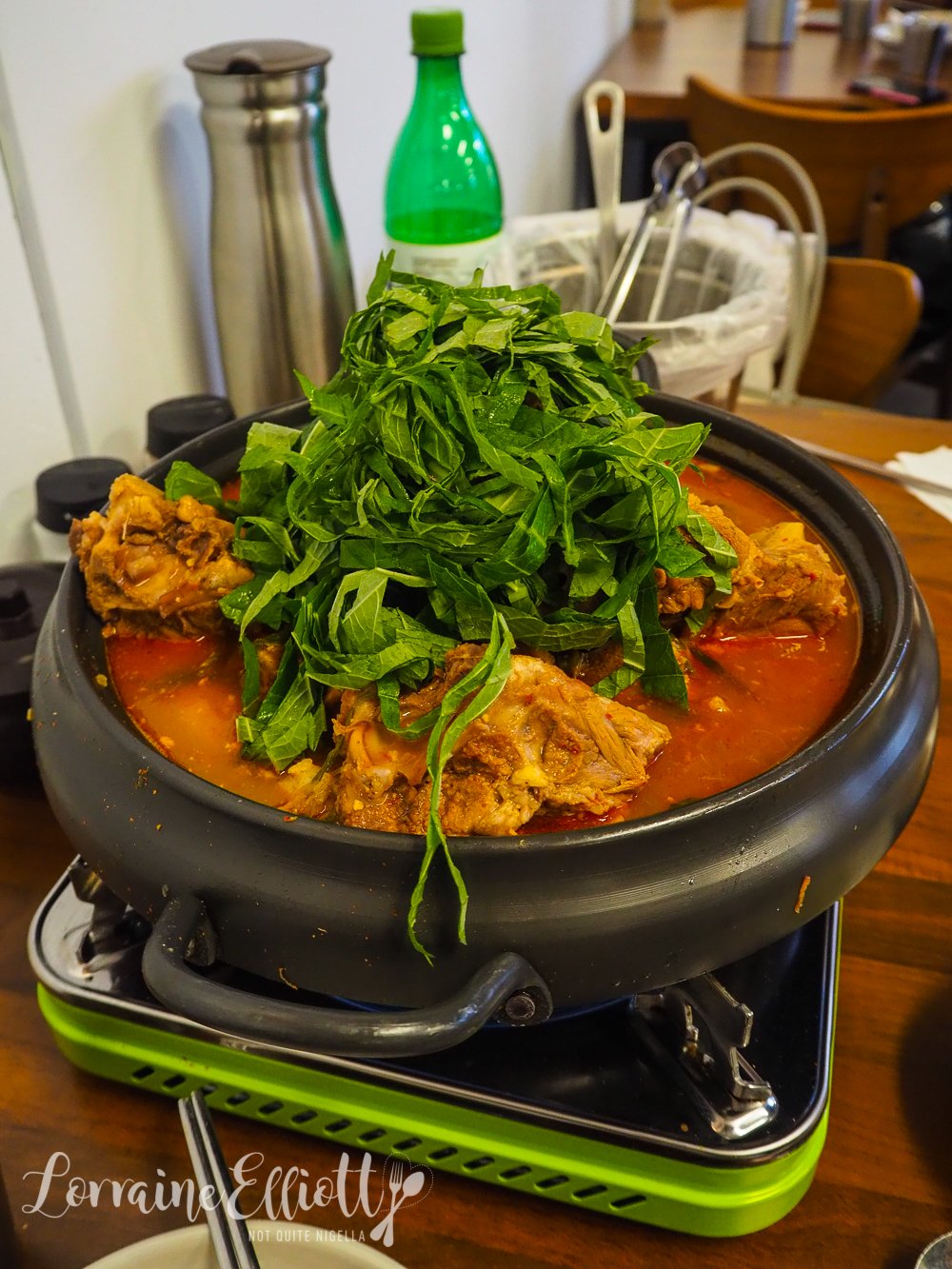 The enormous pot of potato and pork bone soup arrives and bubbles away on the side of our table. We're not sure how long it should cook for as everything appears to be cooked already and you really have to flag down the staff. We submerge the chiffonaded greens in the spicy soup where they quickly wilt and then ladle the soup into our bowls and retrieve a large bone piece with the tongs. The soup is full of flavour and goodness and the meat comes off the bone fairly easily with a bit of prodding. It's the sort of bone that you do have to labour over somewhat-I love it but it isn't a dish for those that don't like a bit of work to get their meat. Also we don't get any potato noodles although these are mentioned on the menu. 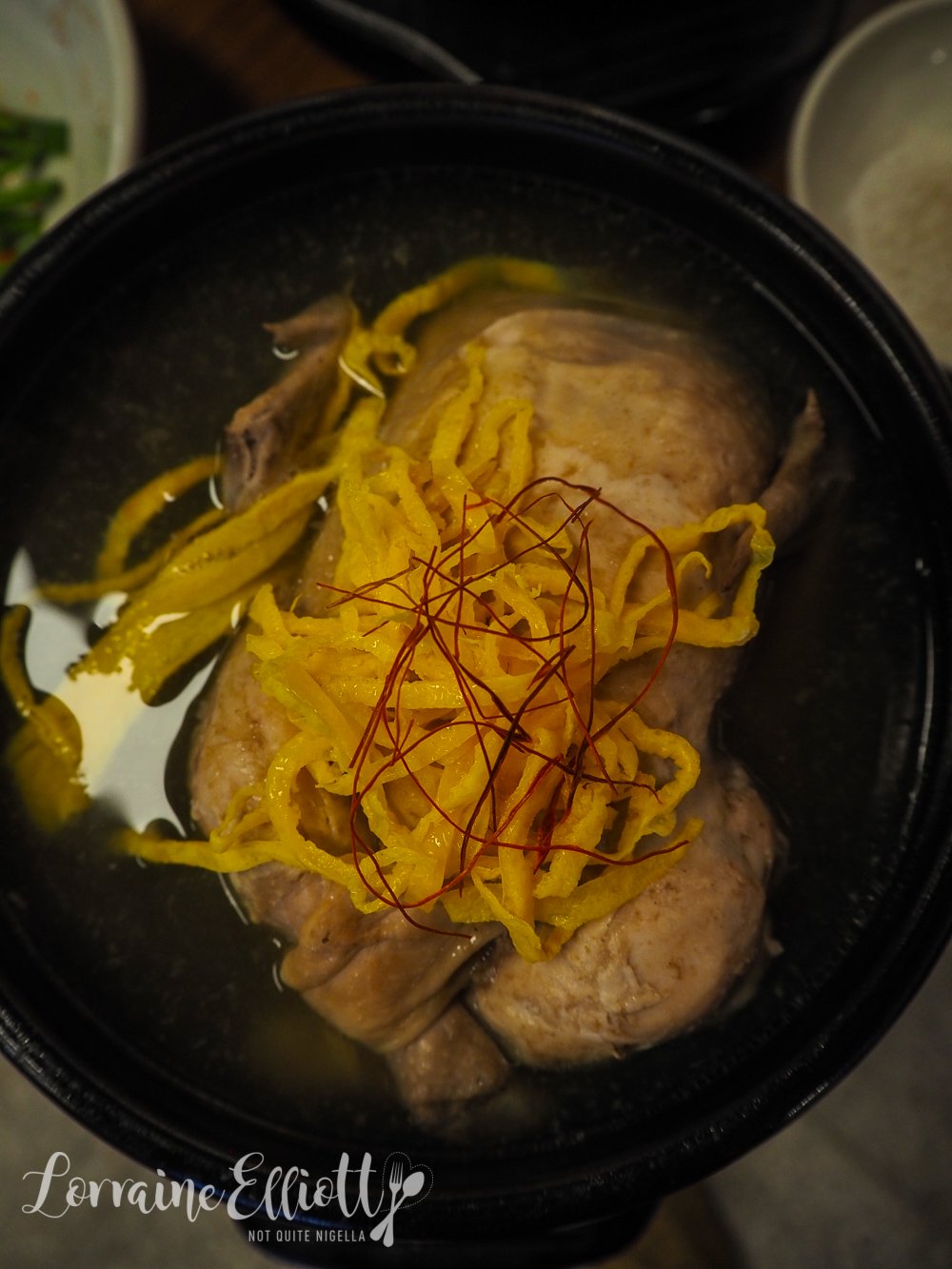 The last item to arrive (and it arrives quite a bit later so dishes are best shared) is the Ginseng chicken soup with a whole small chicken and omelette strands in it. It's filled with some purple rice and jujubes and is similar to the pork soup in that it is milder and comforting. It comes with some salt and pepper to add a bit of seasoning to it. After the spiciness of the pork bone soup it's a little less exciting although Ivy has been feeling a cold coming on so it's good for instances like that. 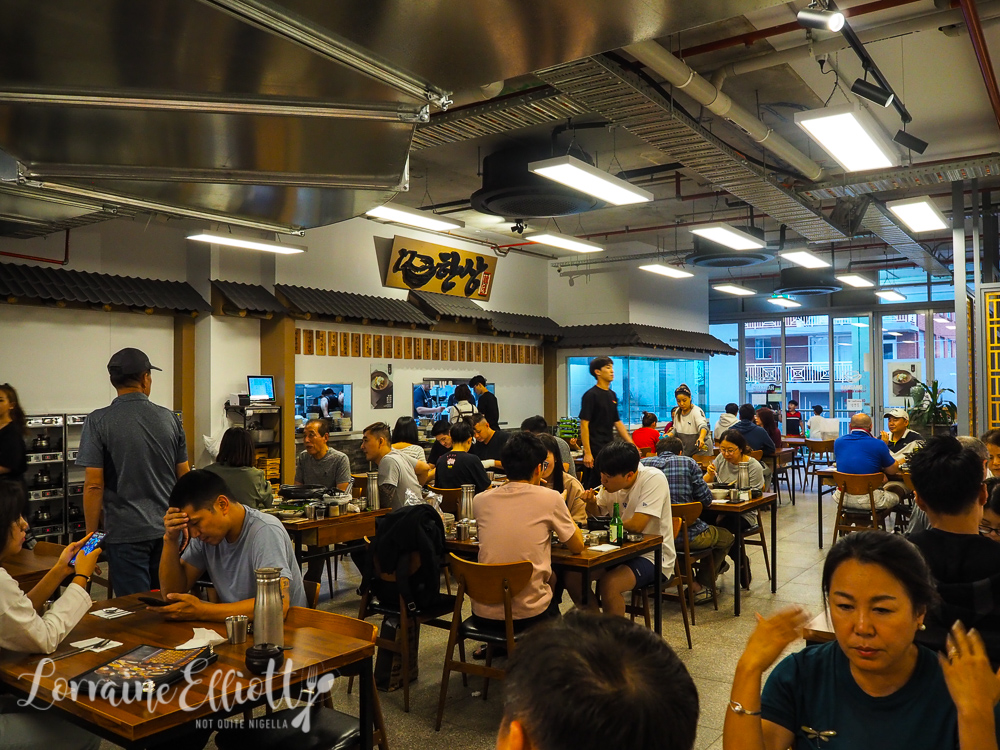 We're stuffed full, even Mr NQN who has had a whole day windsurfing and there's no dessert on the menu to speak of. Instead we go shopping for Korean treats to take home!

So tell me Dear Reader, do you believe that bone broth is good for you? Do you have a favourite type of banchan?