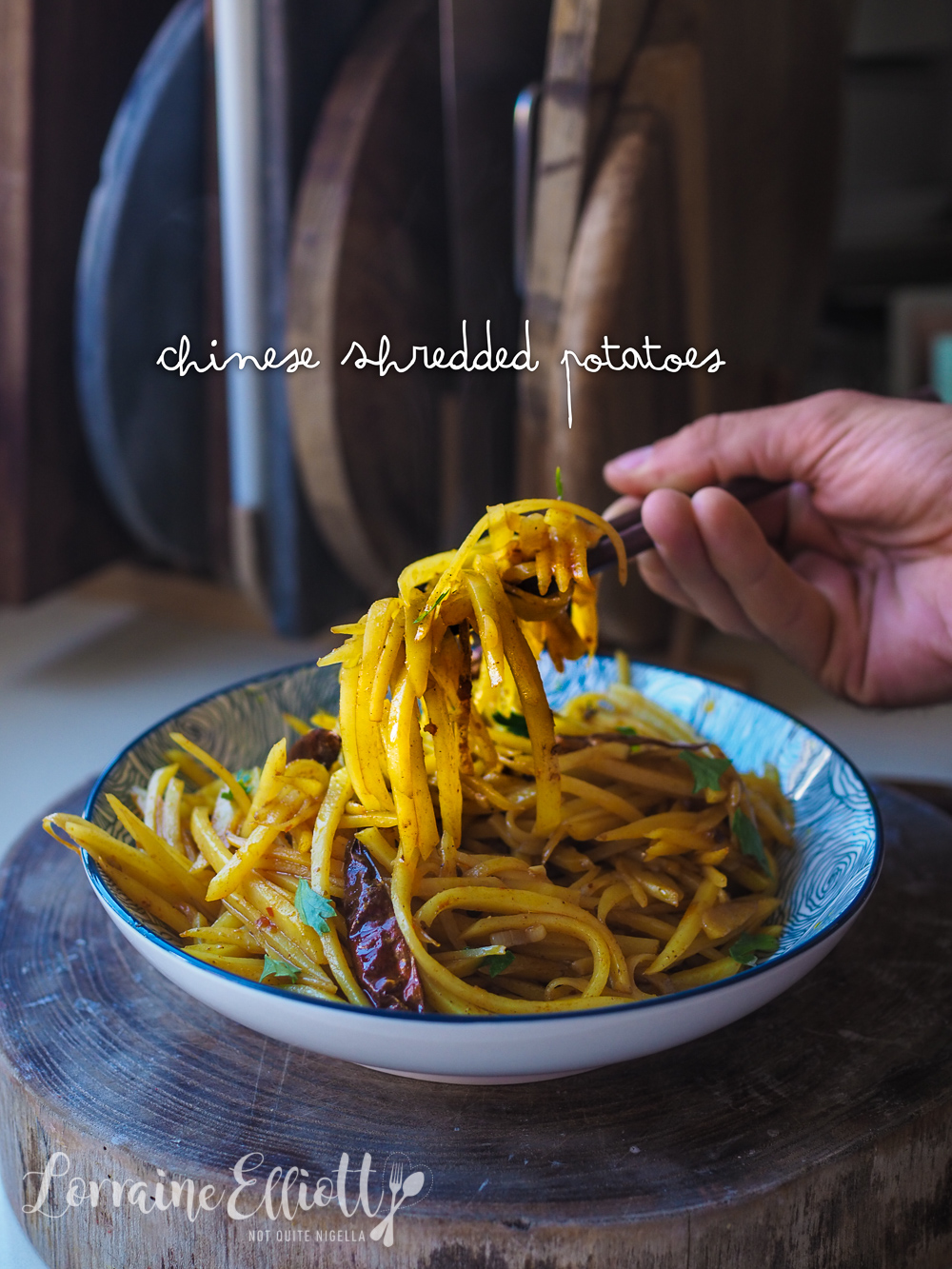 These spicy Sichuan Chinese shredded potatoes or Suchao Tudou Si are a simple treat and so different to other ways of serving potatoes. While they resemble shoestring fries, these potato shreds have a crunch to them as they are very lightly stir fried. They are also very tasty and I hope you'll try these at least once!

I first tried these Chinese shredded potatoes in Yangshuo, China where they were simply stir fried with garlic, chilli and oil although its origin is said to be North Eastern Chinese. You don't normally think of potatoes in Chinese cuisine but there are lots of dishes that use them although we didn't grow up eating them much except in curry puffs. Somehow due to the deprivation of potatoes in my childhood, came a later day love of this vegetable and well I can't be left alone with any potatoes.

Traditional these potatoes have a light crunchy texture. This might be odd to some people so you can of course cook these further but I really liked them as they were. They're not raw, they're definitely cooked but partially so.

The key is to remove the starch from the potatoes by soaking them in water and then rinsing them 2-3 times until the water runs clear. 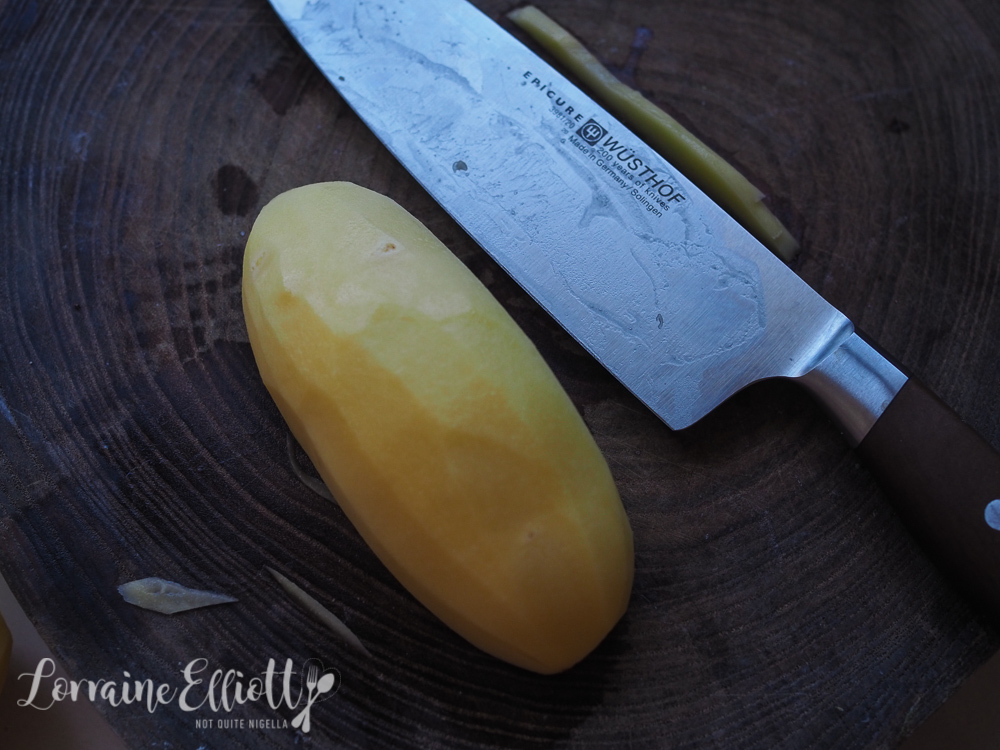 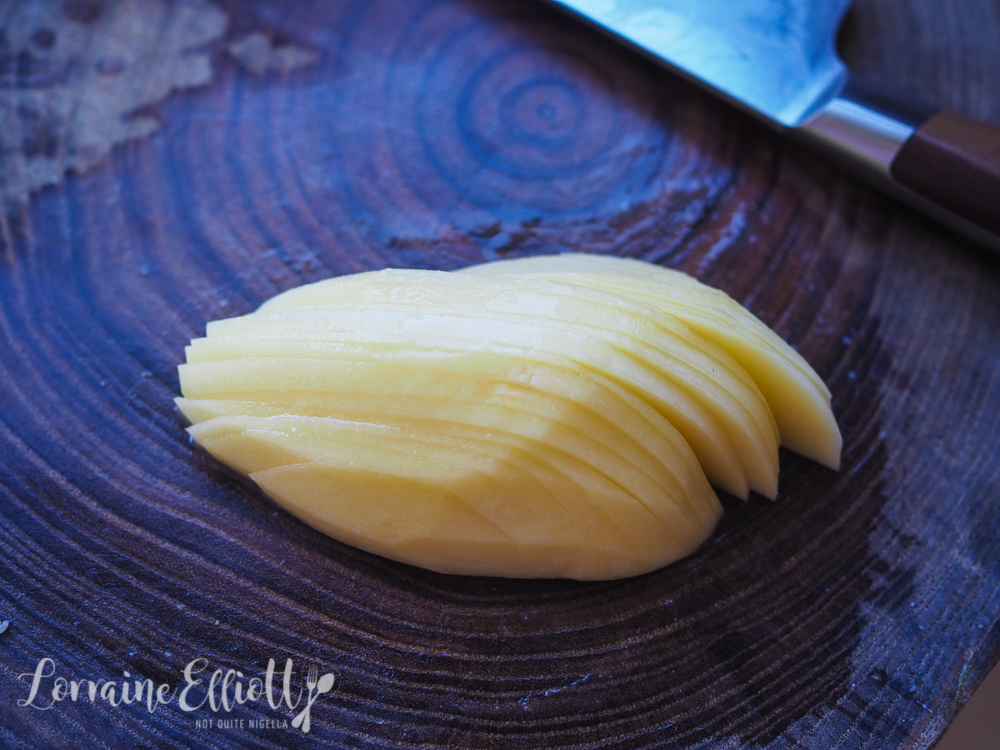 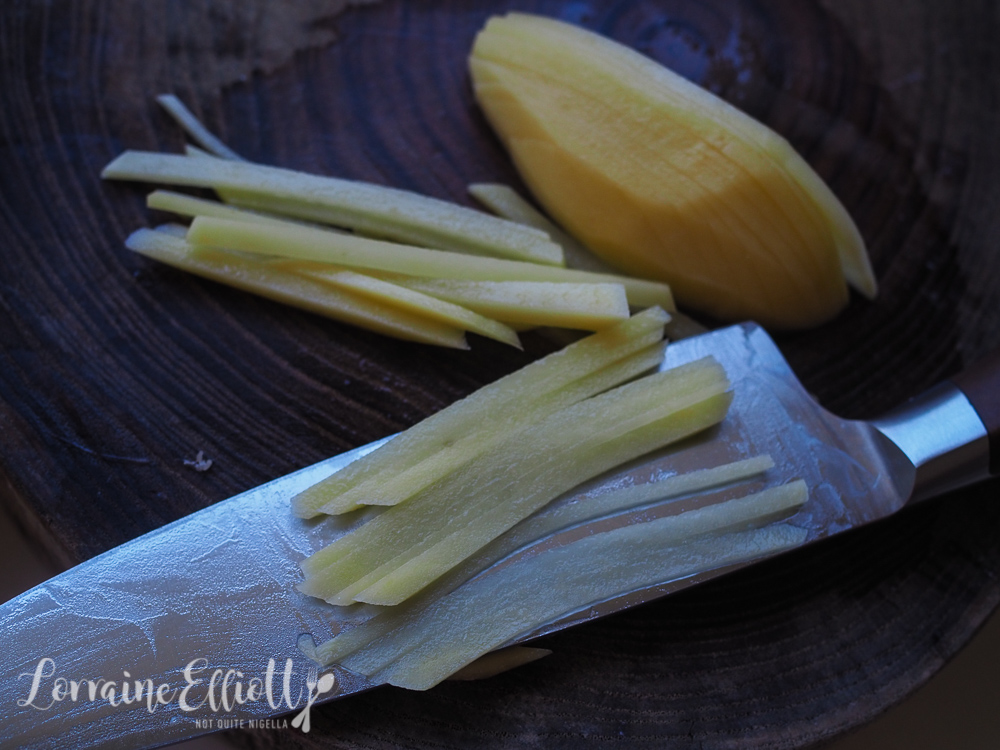 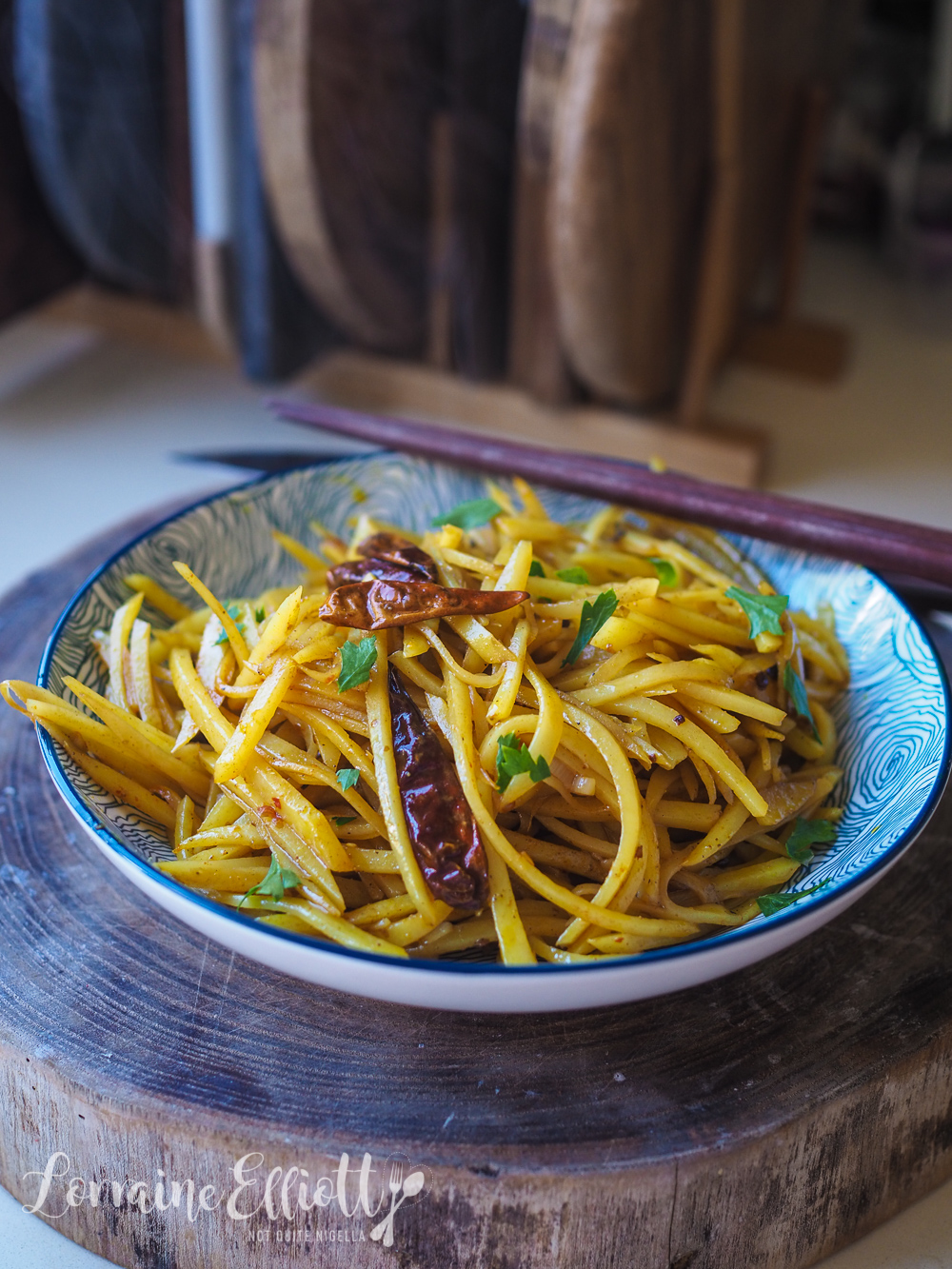 How are you going with your holidays? Christmas now seems so very long ago to me. Just before Christmas I was very stressed and busy. I was trying to do a complicated photo shoot just before the Christmas break.

Our apartment is small and cramped and Mr NQN is a notorious hoarder - he gets it from his family, particularly his father. As a result, there is a lot of "stuff" aka junk and it's hard to manoeuvre around. There isn't much free floor space.

I was trying to make and then shoot an ice cream cake but I couldn't find my cake turntable and scraper so I was already frustrated. After the ice cream cake I was shooting another frozen recipe and I didn't have a lot of time. We had a bag of ice out to keep the second dish cold. I had it sitting on the only free space available, on the bottom tier of a step ladder. I was mid-shoot and then I heard this almighty noise from behind me. 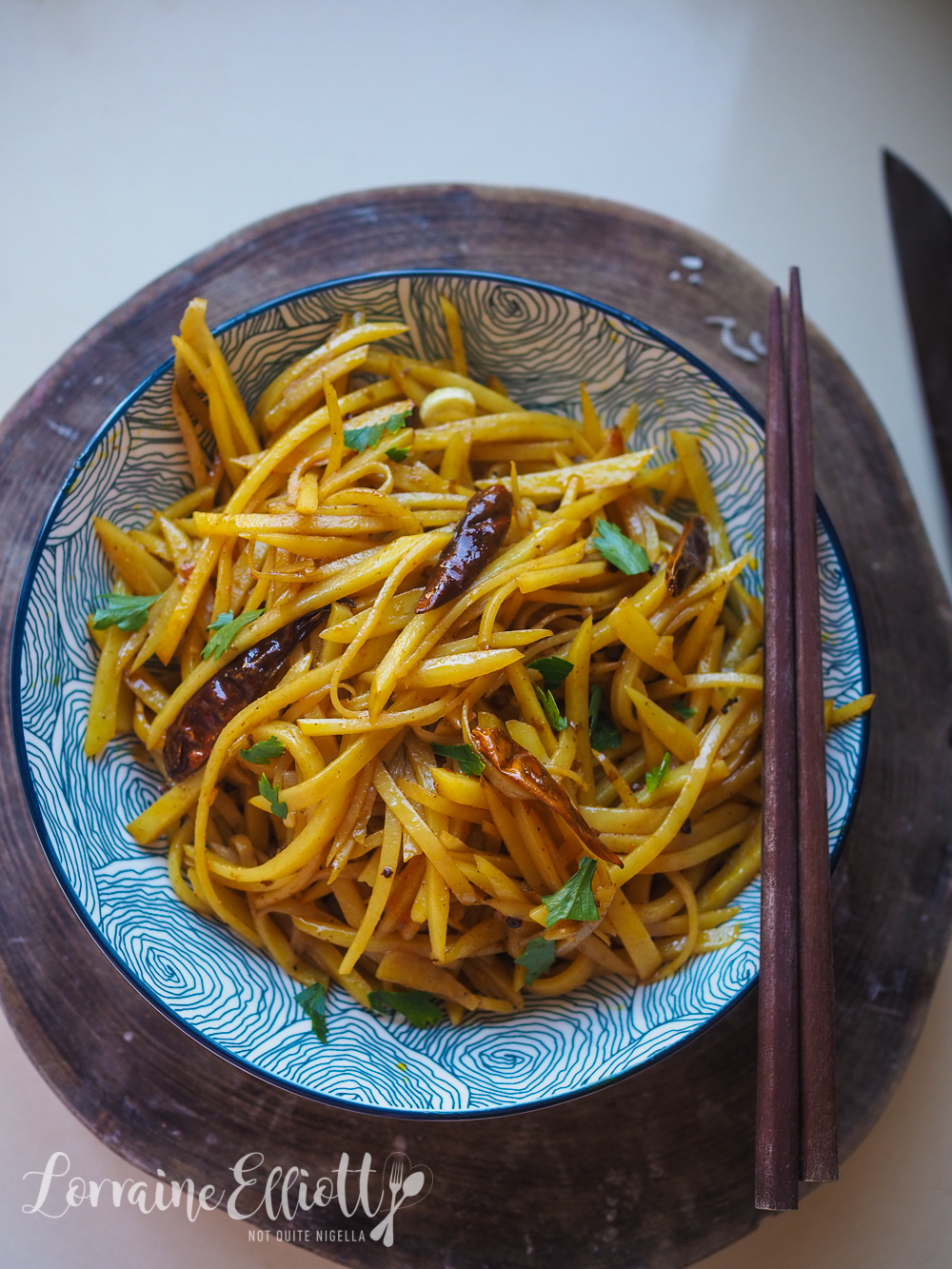 The whole bag of ice had fallen down. Not only had the ice fallen out but the whole floor and our wooden floorboards were strewn in melting ice and water.

Mr NQN ran out of the other room off his Zoom call as soon as he heard the commotion. "I have to keep taking photos!" I said sort of in a zone, slightly dazed. Everything was melting and dripping and I had to capture it before it disappeared.

"Are you crazy?" he exclaimed and grabbed a bucket to start scooping up the ice. He was right, it was a definite safety hazard and I'm just lucky that I didn't slip and fall.

All of that seems like a distant memory now as I sit here and enjoy these potatoes. Funny what a difference a few weeks make, in many respects!

Step 1 - Fill a large bowl with water. Peel potatoes and cut in half. Placing them cut side down, slice the potatoes into thin slices and then cut them into long matchsticks (make sure to cut these with the flat side down for safety, see above). Place in the bowl and rinse 2-3 times until the water runs clear. 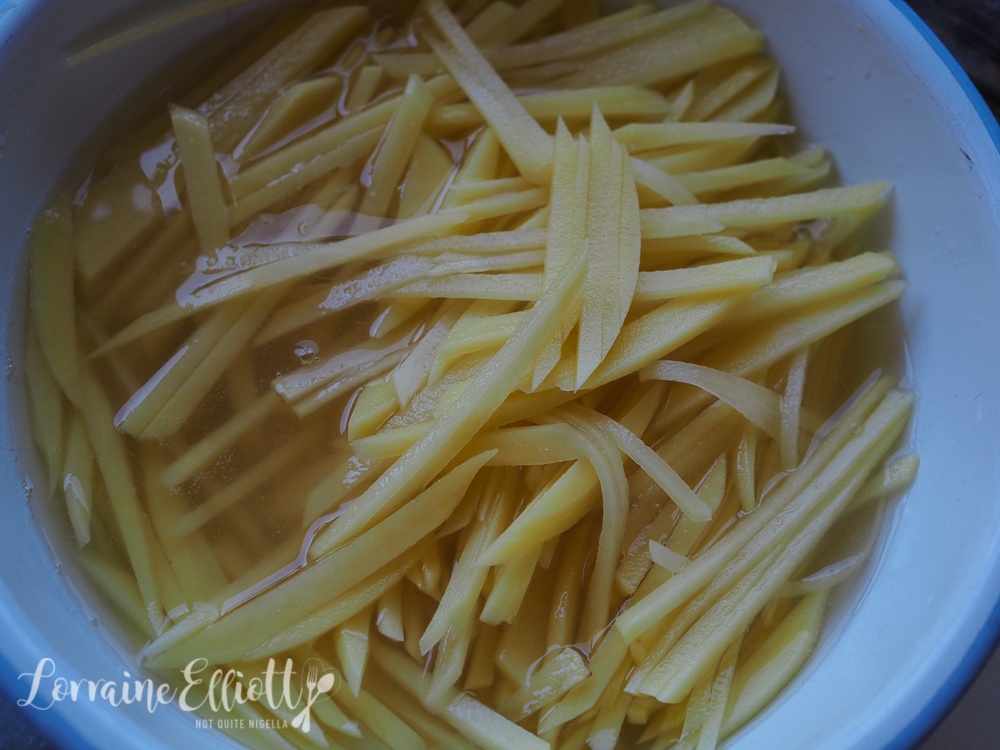 Step 2 - Heat frypan on high heat and add a tablespoon of oil and add chilies and peppercorns. Then add the garlic and potatoes and fry for 2-3 minutes adding more oil if needed. Add the black vinegar and curry powder and cook for 3 minutes (or until it is the texture that you like). Season well with salt (potatoes LOVE salt!) and white pepper. 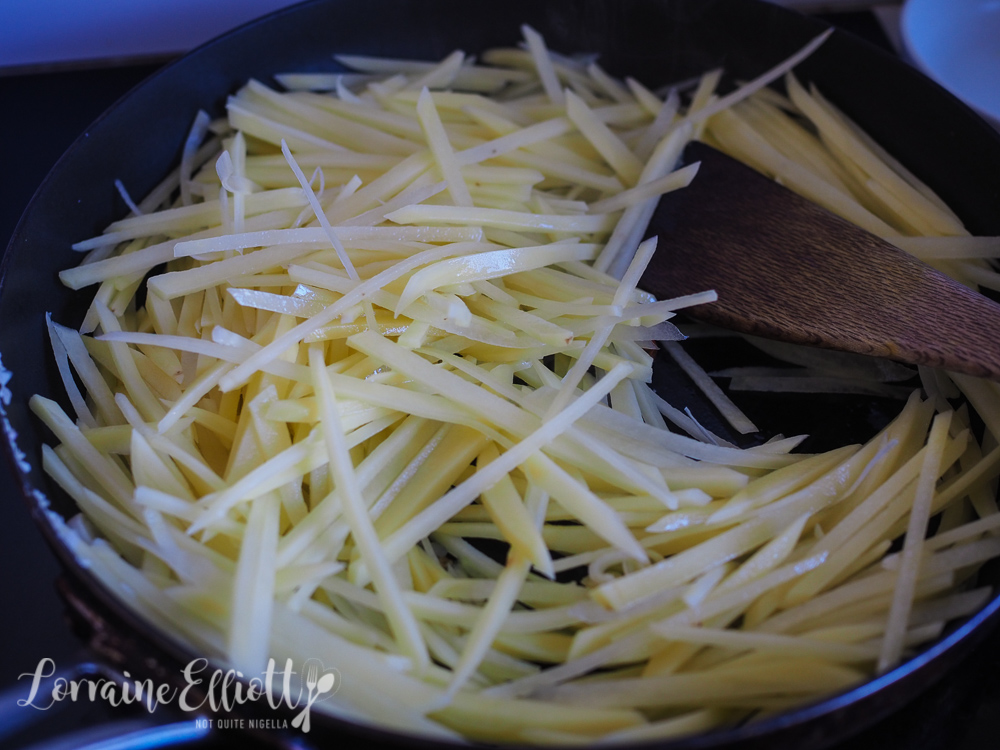 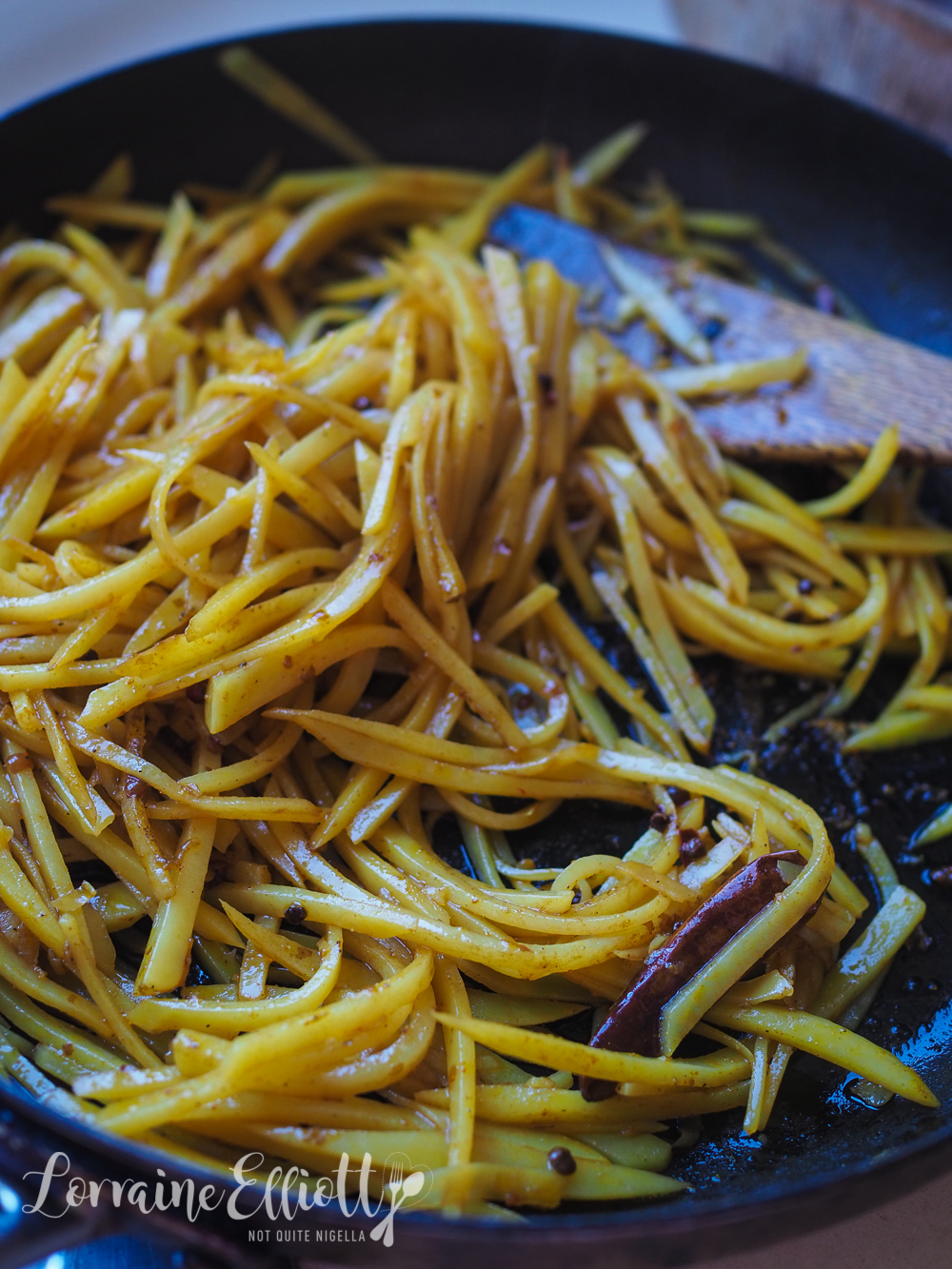