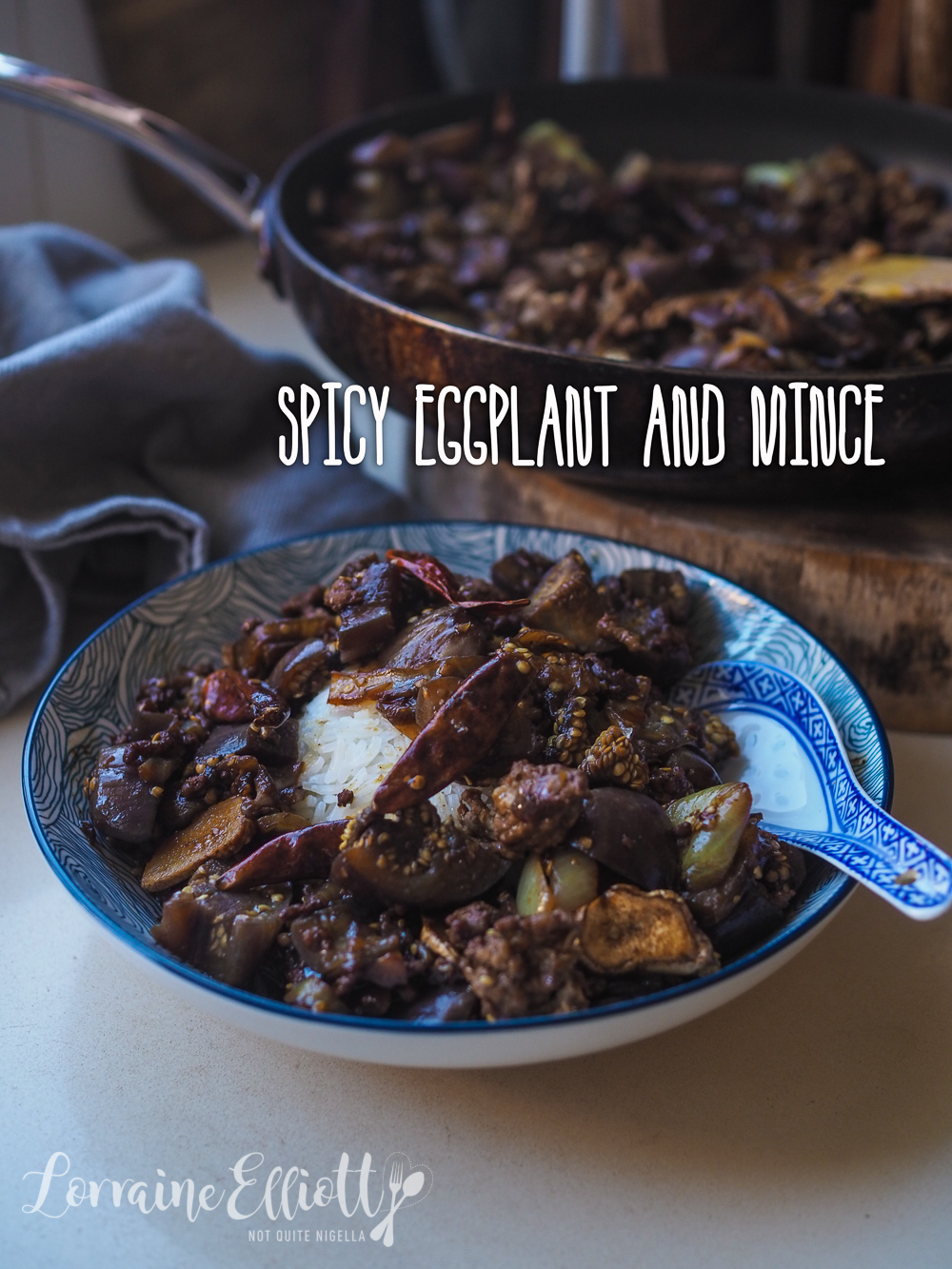 This fantastic all in one meal makes use of half a kilo of eggplant and some mince. We cut down on the oil used with this eggplant dish but there is no sacrifice on taste. There's no need to order takeaway when cooking a stir fry at home is this easy and nutritious. This is another recipe that transforms mince into something absolutely delicious!

Eggplant is a very healthy vegetable to add to your diet as it contains a the Vitamin Bs (B1, B3 and B6), copper and fibre as well as polyphenols which help process sugar. I love eggplant but often boil the eggplant to cut down on the amount of oil that it absorbs.

Don't peel your eggplant! Eggplant skin is full of nutrients including an antioxidant nasunin. This is a free radical scavenger that helps to protect cell membranes from damage and lets nutrients in and waste out. 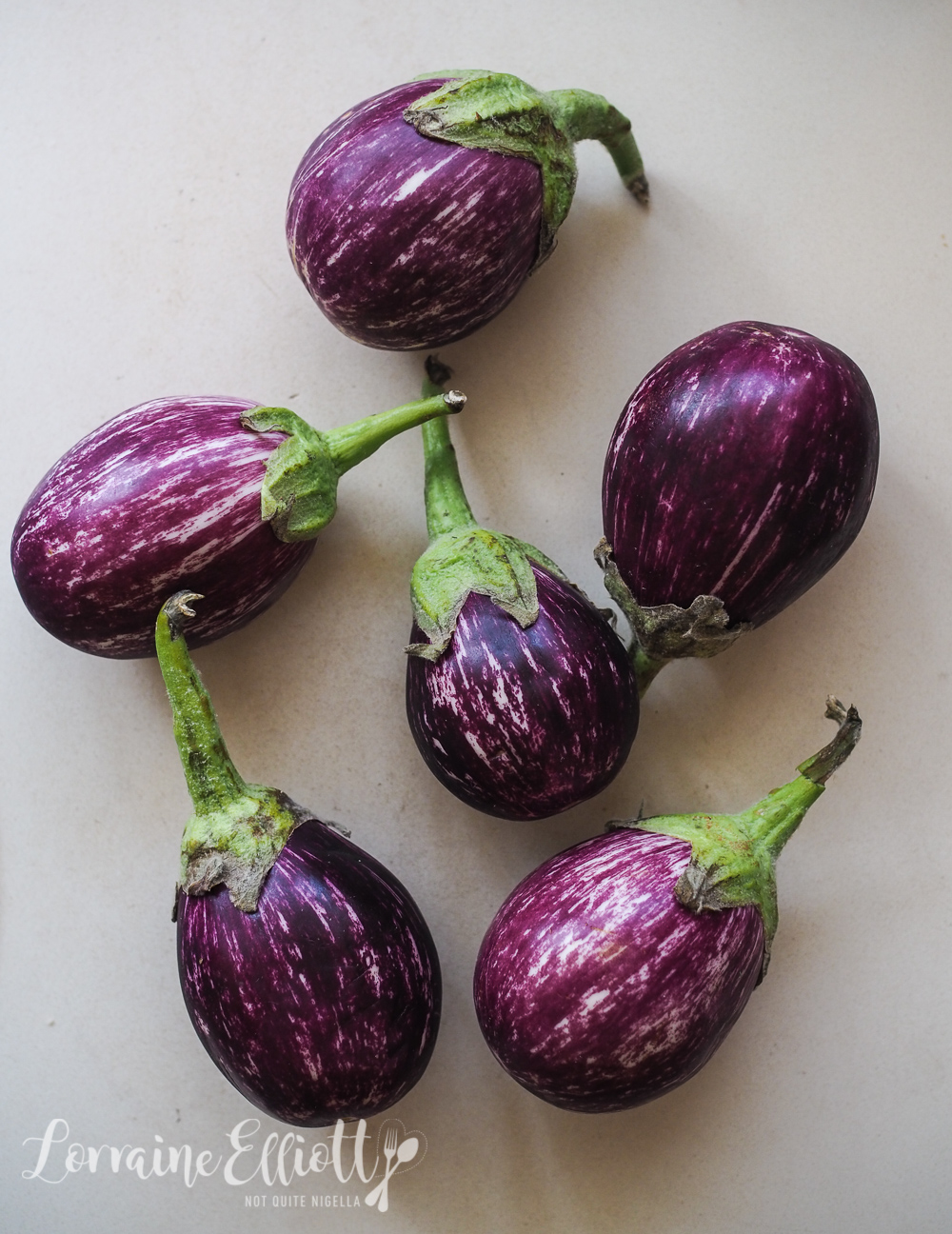 Salting eggplant? These were small graffiti eggplant that I had left in my crisper for a bit longer than I should have. They had lots of seeds but there wasn't any need to salt them to draw out any bitterness. If the seeds inside are black then you will want to remove them as they are bitter. Also if the flesh is brown rather than white or cream, that is the sign that the eggplant is on its way out. Look for eggplant that is glossy skinned and heavy for its weight with a firm green stems.

Which mince to use? I used pork and veal which was left over from another recipe but you can use beef, chicken, turkey, veal or plant based mince in this recipe.

Stir fry tips: With all Asian or Chinese recipes, have everything measured up front and then it's a cinch. Also, don't cut the eggplant too big. You want it to absorb the sauce well. 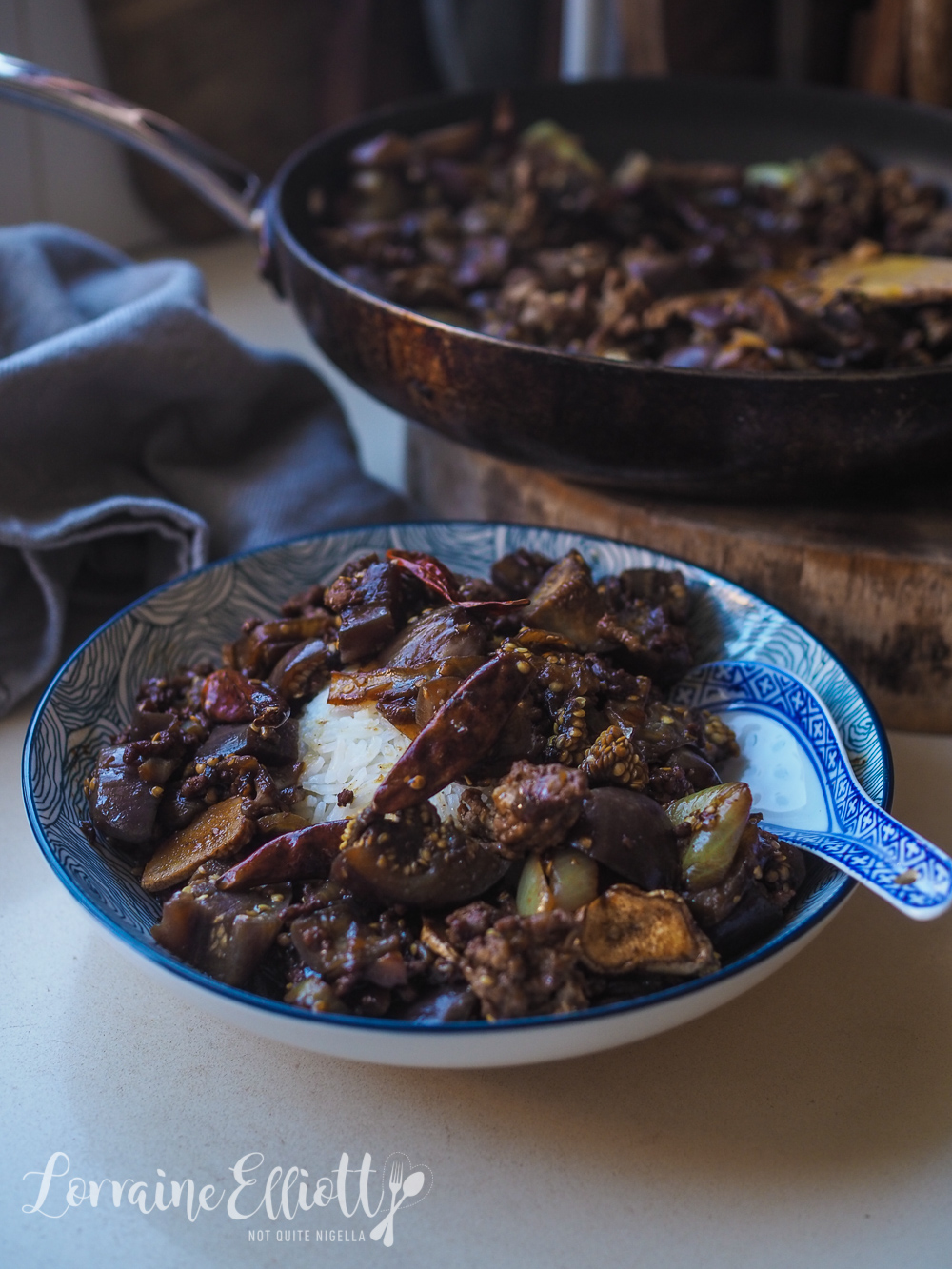 While I have a lot of eggplant in my crisper, I also have quite a few new things to show you that are In My Kitchen, the series that is hosted by the fab Sherry from Sherry'sPickings where we show you the new things in our kitchens. 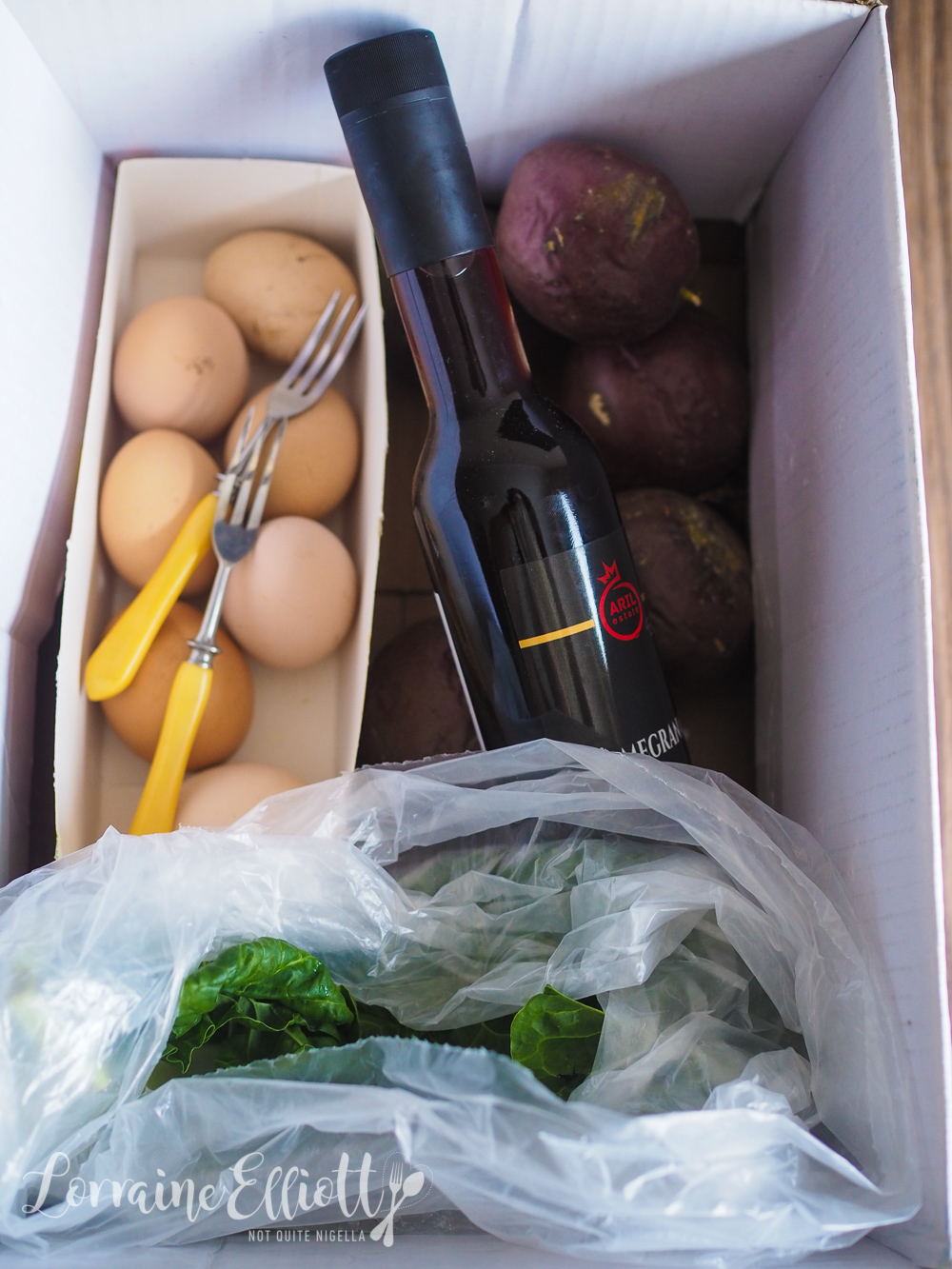 The first lot is from my friend Valentina whose son Will has created an impressive home garden complete with a chicken pen. There are eggs from her chickens, passion fruit and spinach from the garden plus some pomegranate syrup and forks from her weekends at her farm (which we are headed to soon!). The home grown produce is so crisp and fresh and lasts for ages and the pomegranate syrup makes for a delicious salad dressing and those vintage forks have popped up in many of my photo shoots! 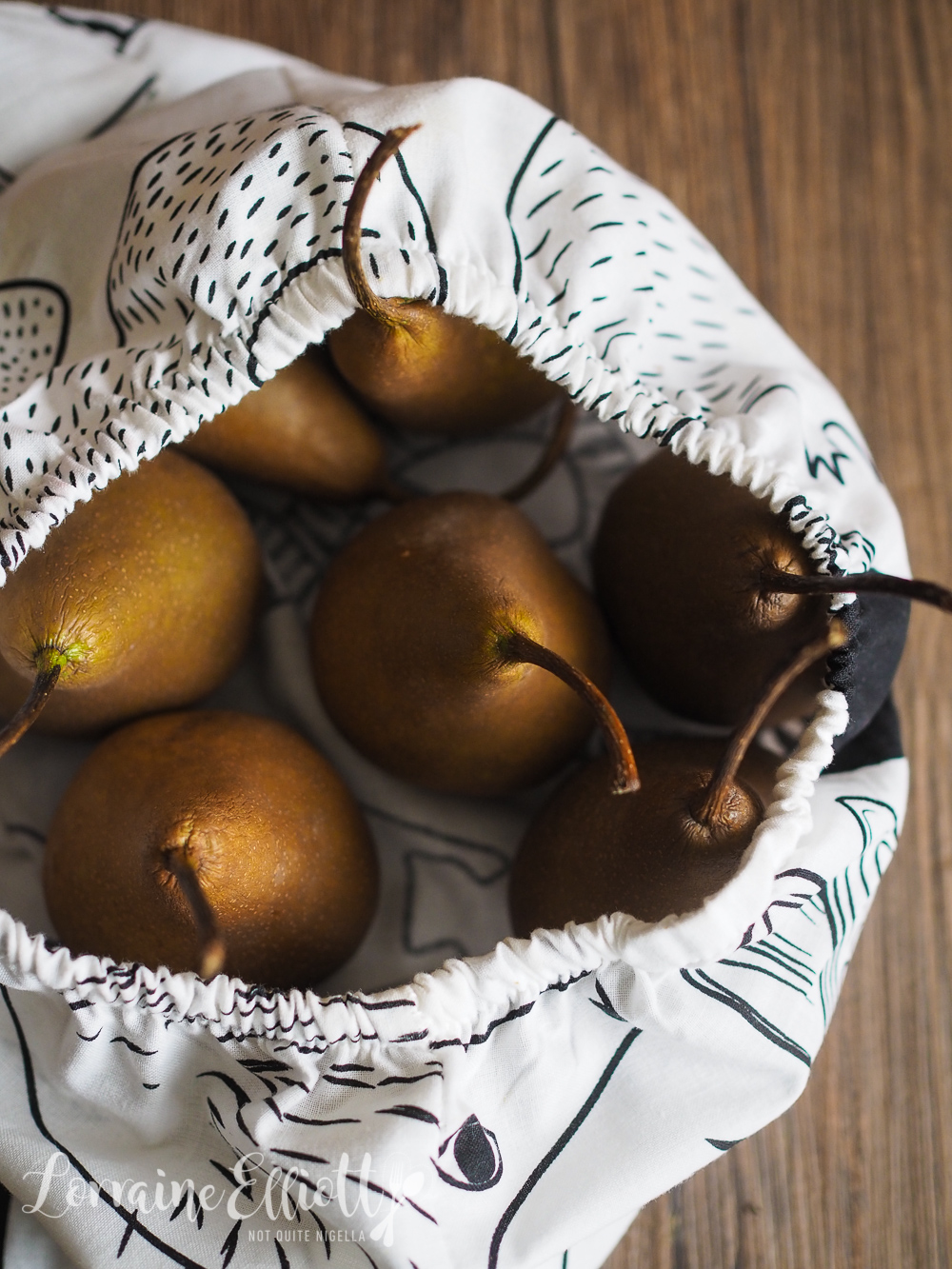 I sometimes receive packages from brands and one of the most exciting ones recently was from a new Australian brand called Pleasant State. Sian and Ami sent me some product during their testing phase and I really liked it and now they've secured funding to make their non plastic, eco friendly waste-free cleaning products. 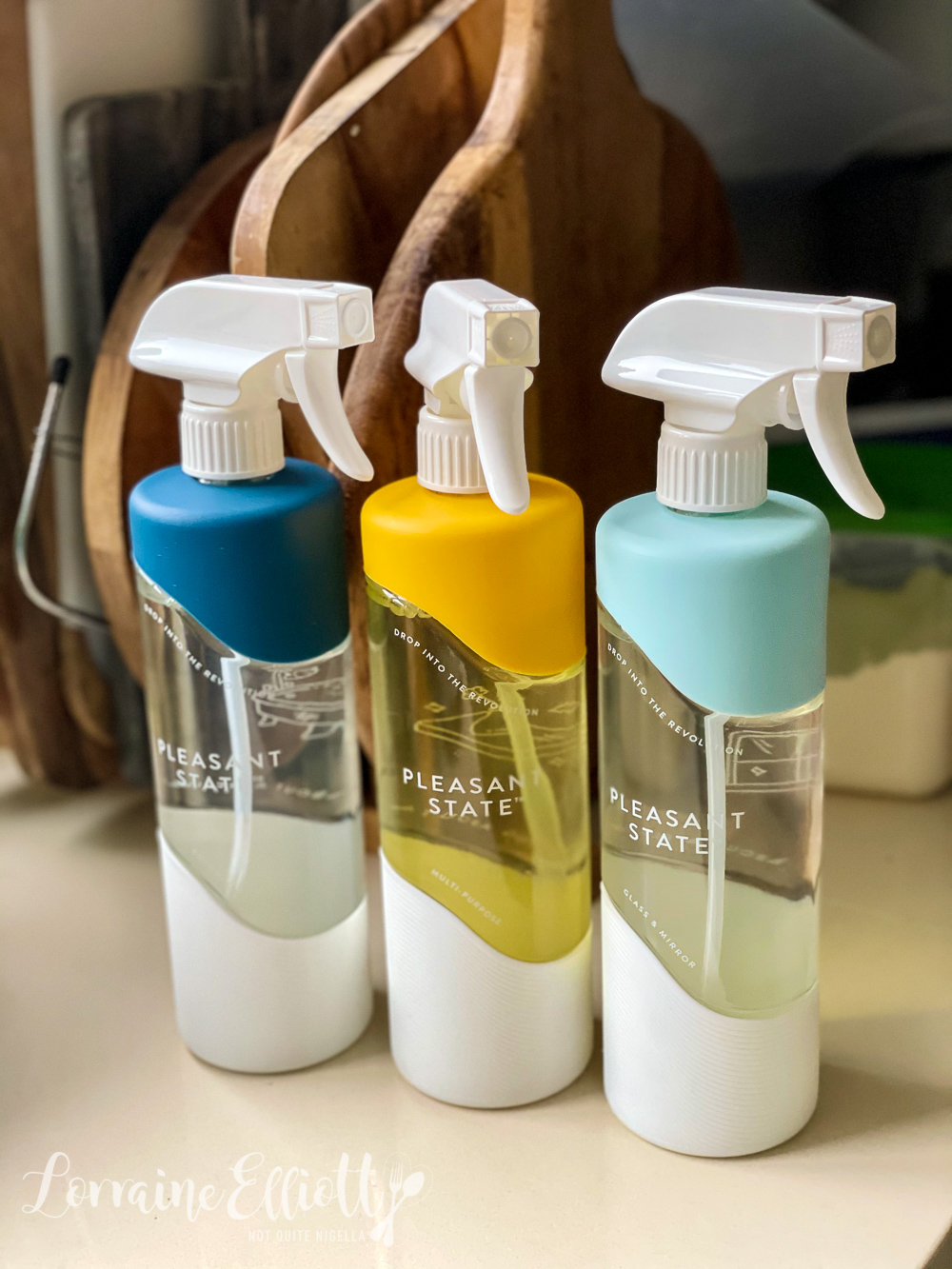 They have great glass spray bottles and the product itself is in a tablet form that you add to warm water. You let it sit for 45 minutes and it then makes for a great multipurpose, glass and mirror or bathroom cleaner. The tablet is much better for transport (rather than bottles of liquid) and comes in a biodegradable paper pouch! Plus the whole kit comes with matching microfibre cloths so it is all reusable. 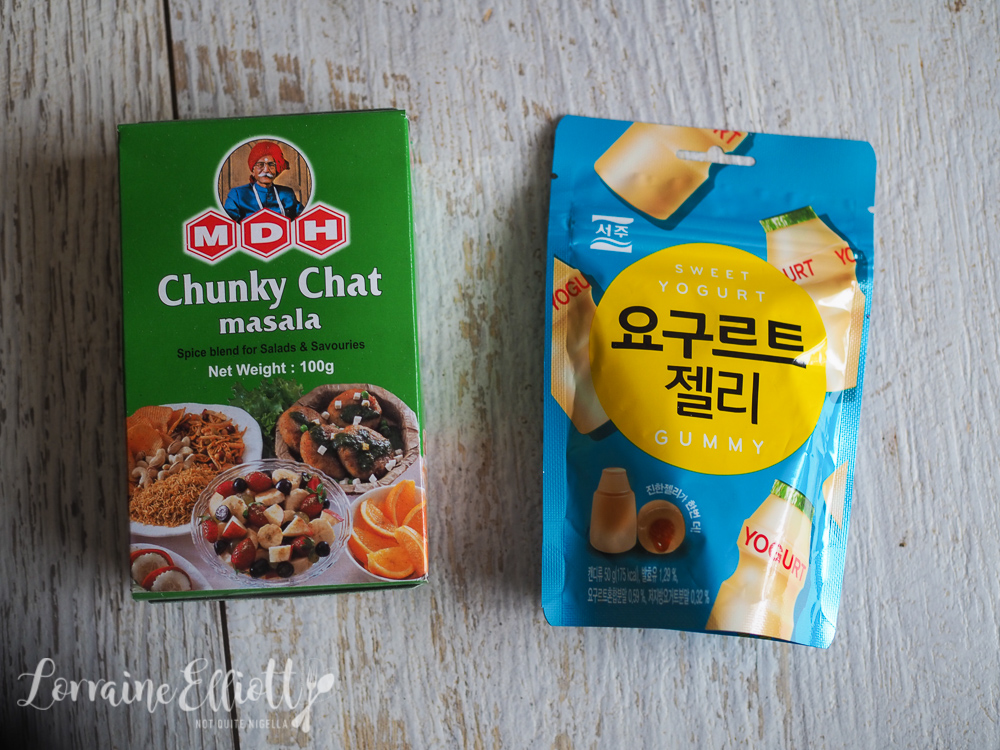 The last items are things that I bought in grocery stores that I've popped into on my travels. The first is from an Indian grocery store and is called Chat Masala which is a spicy seasoning mix of salt, unripe mango, cumin, coriander, pepper, musk melon, mint and ginger and you sprinkle it on pretty much anything sweet or savoury. It goes particularly well with fruit to bring out the sweetness of fruit. The other item is from a Korean shop and it is Yakult gummies. This was a little present for sugar fiend Mr NQN who devours lollies like a vacuum cleaner. They tasted just like Yakult too with a very, very tiny liquid centre!

So tell me Dear Reader, do you have anything new in your kitchen? How do you usually cook eggplant?

I find dried chillies tend to be less hot and potent than fresh but that's probably because I select fresh chilli varieties for their heat while dried seem to be generically mild chillies. But of course if your dried chillies are super hot, then use to your taste.

Step 1 - Place a pot of water onto boil and once boiling, add the eggplant pieces and simmer on rapid for 5-6 minutes.

Step 2 - Meanwhile heat oil in a large frypan and fry onion and ginger on medium high heat until onion softens. Add garlic and cook for 1 minute. Then add the mince and break it up with the spoon or spatula and cook the mince through. 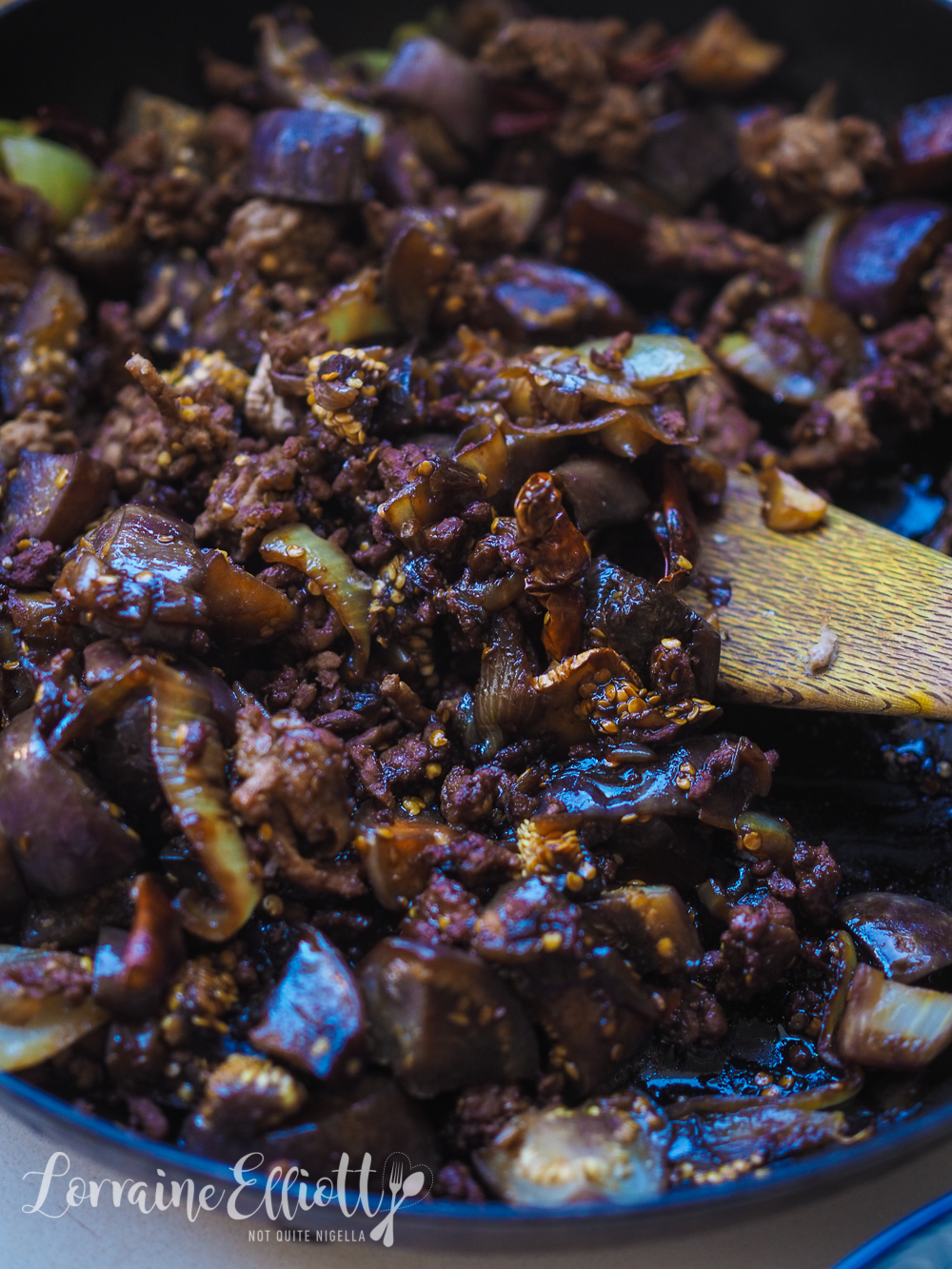 Step 3 - By this stage the eggplant should be ready. Drain the eggplant and add to the frypan. Add the chillies, cooking wine, sugar and dark soy sauce and stir to coat the eggplant. Cook for a few minutes until the eggplant gets saucy. Add salt to season and serve with steamed rice. 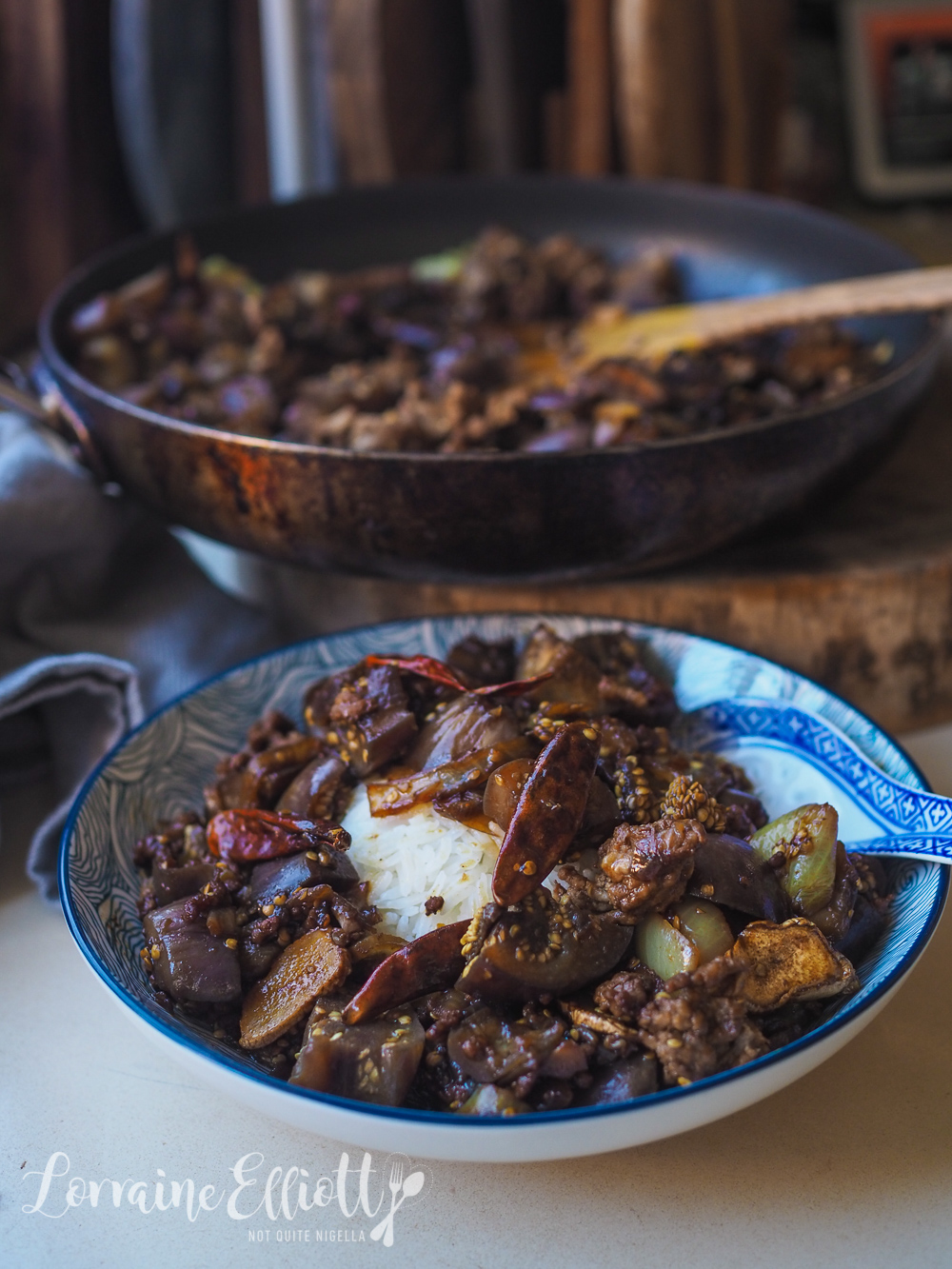