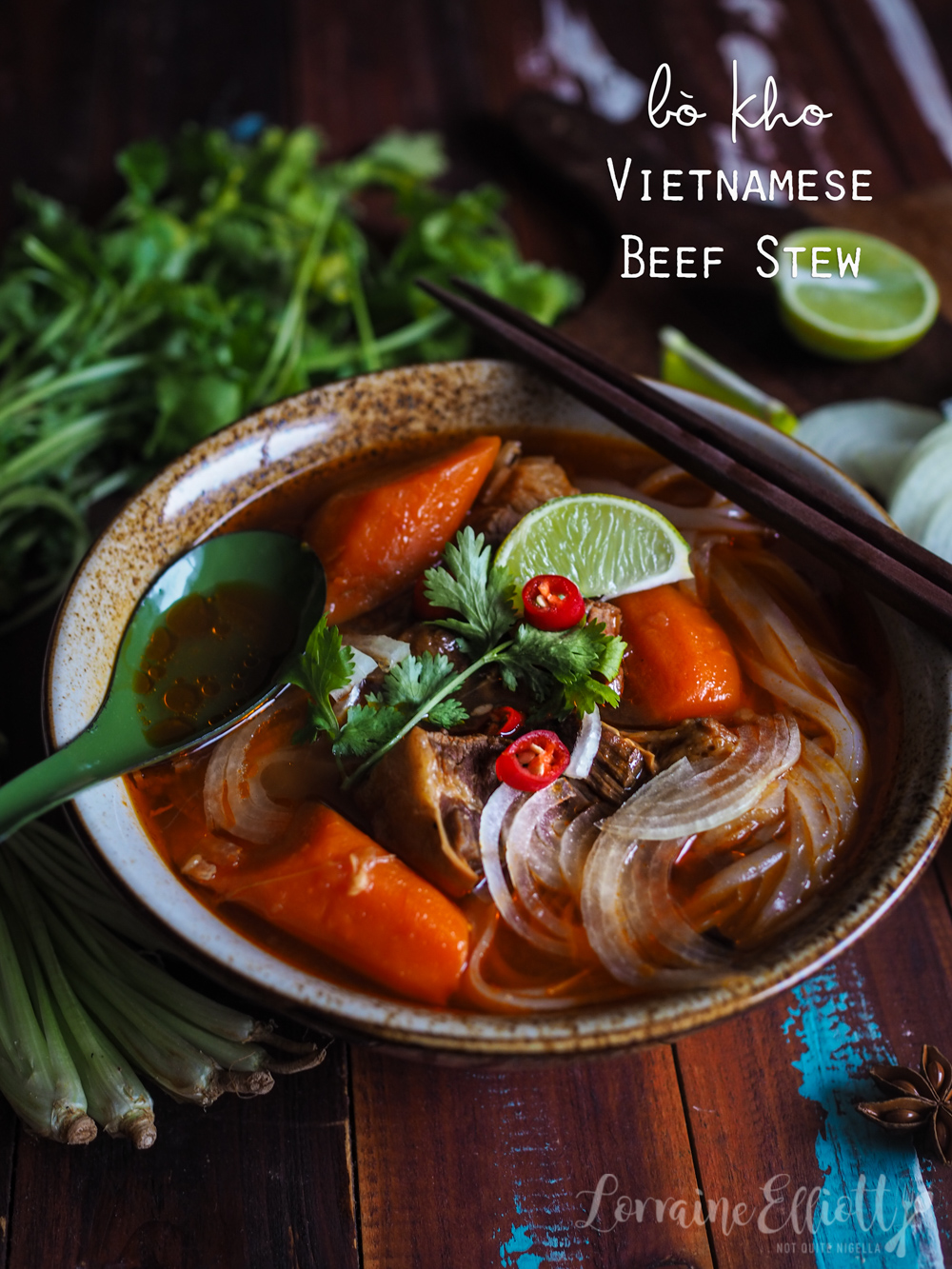 Bò Kho is an incredibly delicious Vietnamese beef stew with a silky texture and melt in the mouth beef pieces. It's perfect for winter and you can serve it with crispy bread rolls or rice noodles for a delicious meal. I have worked on perfecting this recipe for 2 weeks and share my tips for making this beef stew even more incredible. This is a pushy recipe Dear Reader - I really, really hope you'll give this a try!

I've eaten bò kho a lot but I was inspired to make this by the one I had at Paddy Field House in Marrickville. The soup had the most incredible texture to it-silky and rich with so much flavour to it. There are soft, melting pieces of beef and a rich, aromatic soup and carrots in it. Many people know pho which is delicious but bò kho is richer and features melt in the mouth beef pieces in it and I prefer it for winter. 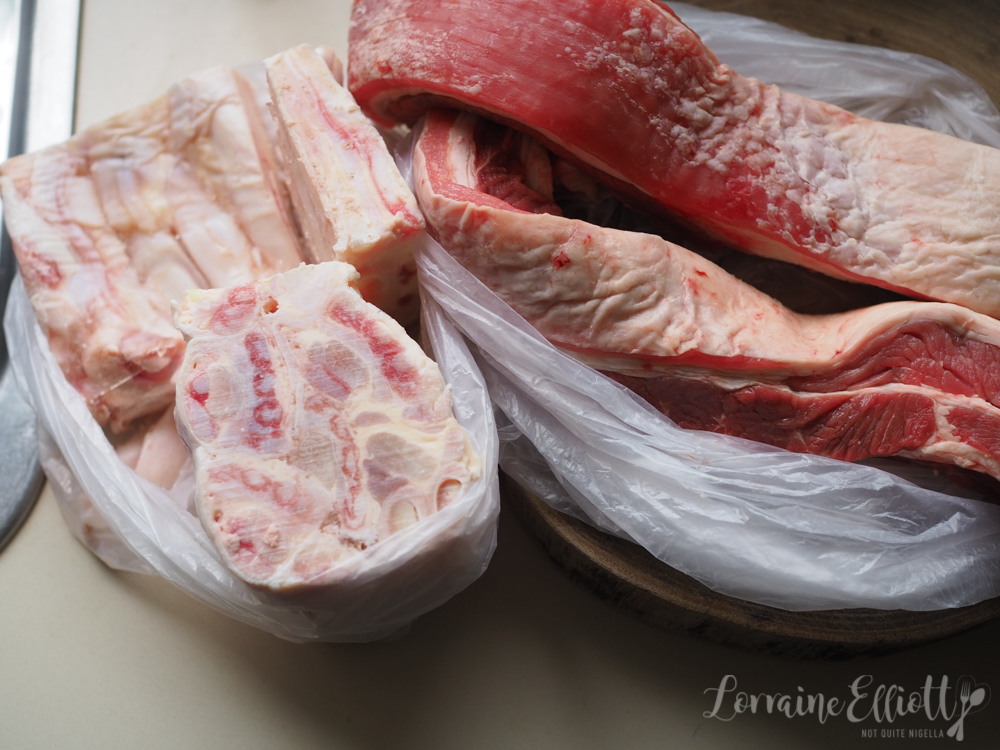 The secret to bo kho: beef tendon and flank

The secret to this bo kho's silky texture is beef tendons that make it more gelatinous. Tendons and bones are inexpensive to buy at the butcher and give the stew a gloriously silky texture. The second secret is to use beef flank as you main cut of meat. 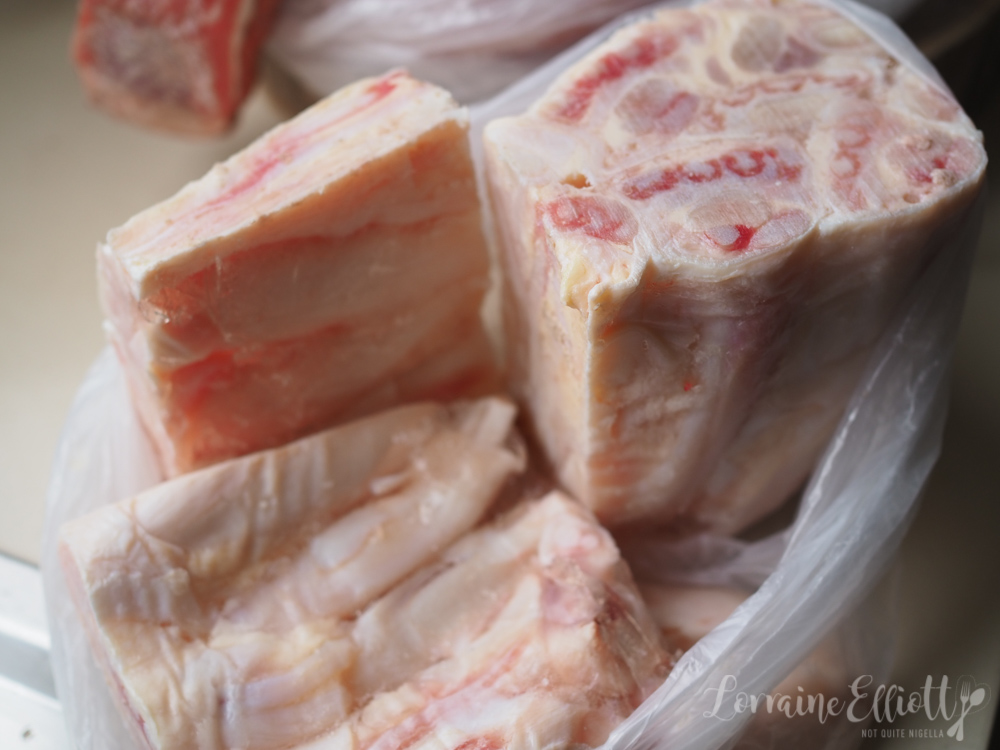 What is beef tendon? If you've had Pho you've had beef tendon. Tendons are the connective tissue the animal's bones and muscles. They're high in collagen which is great for skin health. It imparts a wonderful silkiness to soups and stocks. When you make a broth or soup with tendons you end up with a jellied stock and that is the collagen. In Asian culture they often promote dishes high in collagen as beauty boosters. While you may have to pre-order these at a Western butcher, Asian butchers often have tendons in stock. I bought everything for this at a late night shop at Thai Kee in Market City (not sponsored, I just found it handy to have a butcher open at night!). Once you use the tendon in the soup you can eat it or discard it. It contains a lot of collagen and feels fatty due to its jellied mouthfeel but actually has a low amount of fat. A 100g/3.5ozs piece of beef tendon has 0.5 grams/0.018oz of fat and 36.7 grams/1.3ozs of protein and 150 calories. 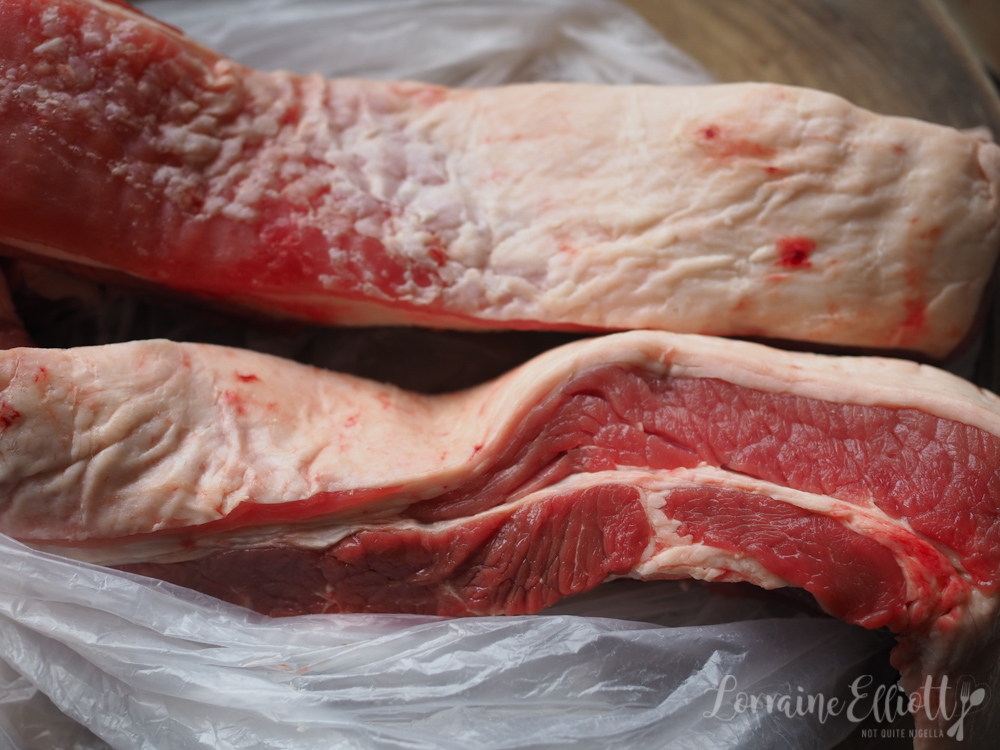 Beef Flank vs Chuck or Gravy Beef: A lot of people use chuck for bo kho which is fine as it is an easy cut to buy but beef flank gives it a much better result, melting down to a beautiful softness and unctuousness. I find that chuck cooks down to be a bit drier. Some people don't like the layer of fat on top of flank but once it's cooked you can just peel it off or eat it. I hope you'll make this with flank because it produces such a wonderful result.

Instant Pot/Pressure Cooker, Slow Cooker or Stovetop? That depends on how much time you have! :) I tend to use my Instant pot/All in one pressure cooker because I can sear the beef and lemongrass/garlic and then cook in one and it cooks for an hour. But it works just as well in a slow cooker or on the stovetop and I've given instructions for all three. 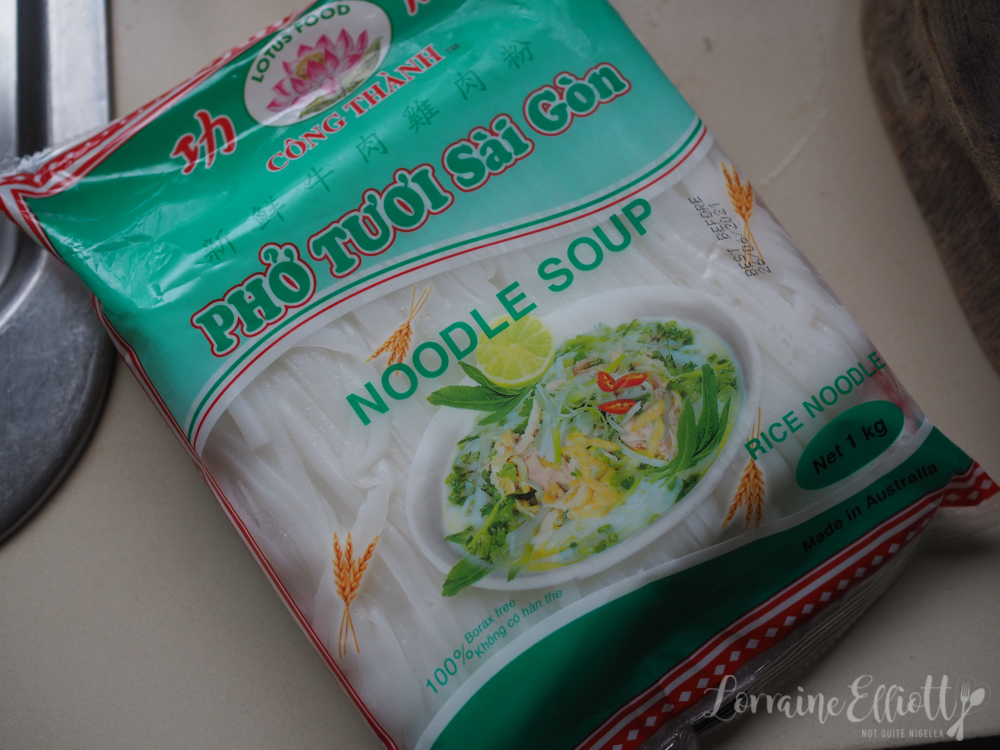 I cannot get enough of bo kho now that we're in the midst of winter. I've spent two weeks developing this recipe making little improvements each time to arrive at this final recipe which I think is just like the one we ate at Paddy Field House. Even Mr NQN who isn't a massive meat eater has had no issues eating this every night for a week. It's so simple and warming and the flavour improves over time so I make a big batch that lasts us for a few nights. 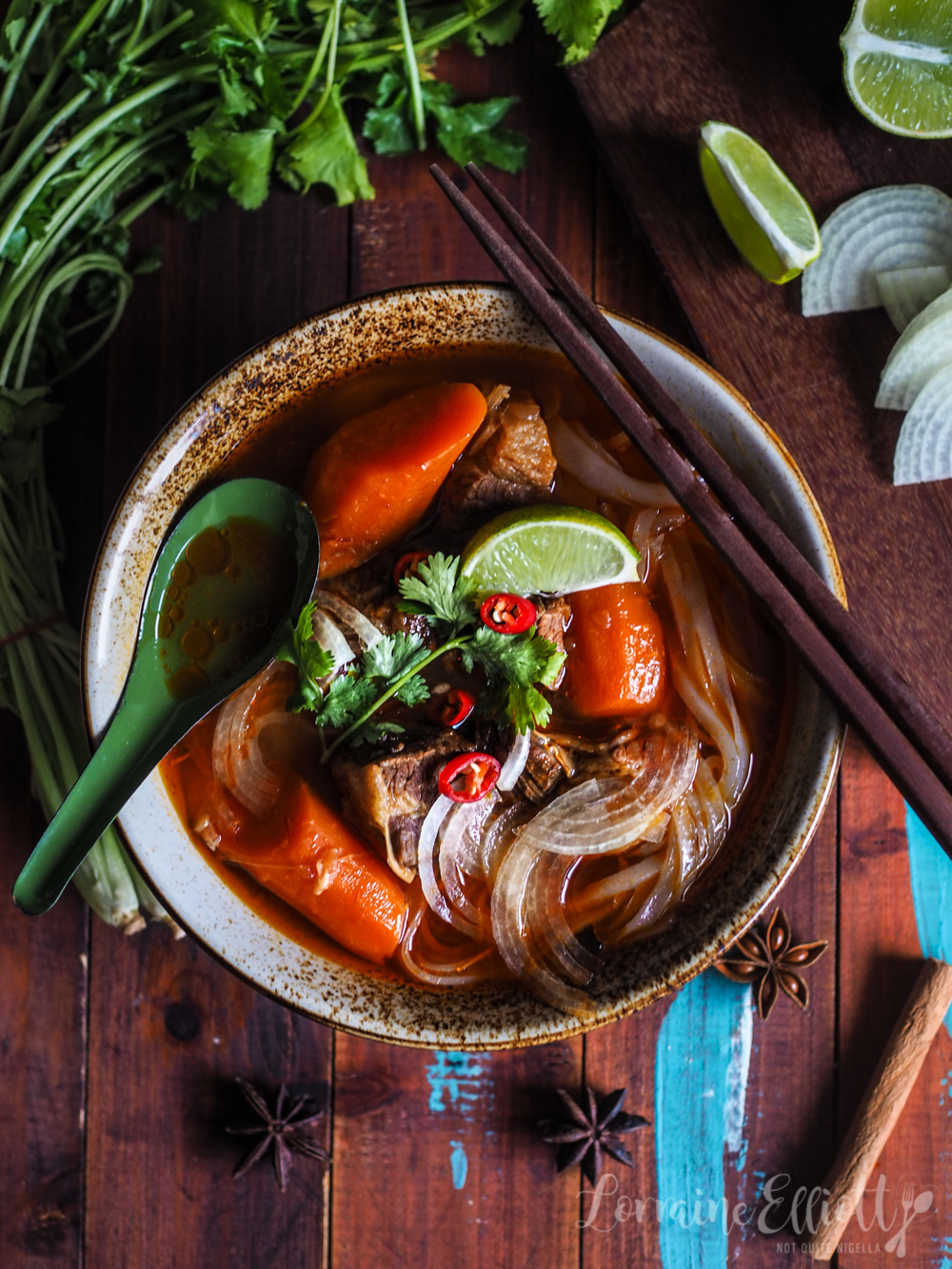 I also have another tip for winter weather Dear Reader! I discovered it when we went to the wedding I mentioned last week. It was held in the Southern Highlands and the night before I checked the temperature and it said that Bowral was going to "feel like" 0 degrees (I always check the "feels like" temperature). Then an idea struck me: pocket warmers! And that's how we found ourselves on the hunt for pocket warmers late one Friday night. We found some at the supermarket. They are hand warmers you keep in your pocket to keep you warm and they last for around 10 hours. Except I was going to do something else.

My dress had quite a voluminous skirt so I wore fleece lined tights and boots underneath it. And in the back of the tights just near my lower back I stuffed one of these pocket warmers and put the other one was down my cleavage. The dress was perfect for it. I was warm the entire time and while I had a faux fur wrap that was all that I needed as my chest was toasty warm!

The wedding was very nice - we sat with Mr NQN's colleagues who were super friendly and it was nice to put a face to the names that he had told me all about. And while I mentioned it was a religious wedding they were a young couple and it was the "friskiest" wedding I have been to with the most sexual references I've ever heard at a wedding including her vows to give him a "special massage wink wink every night"! 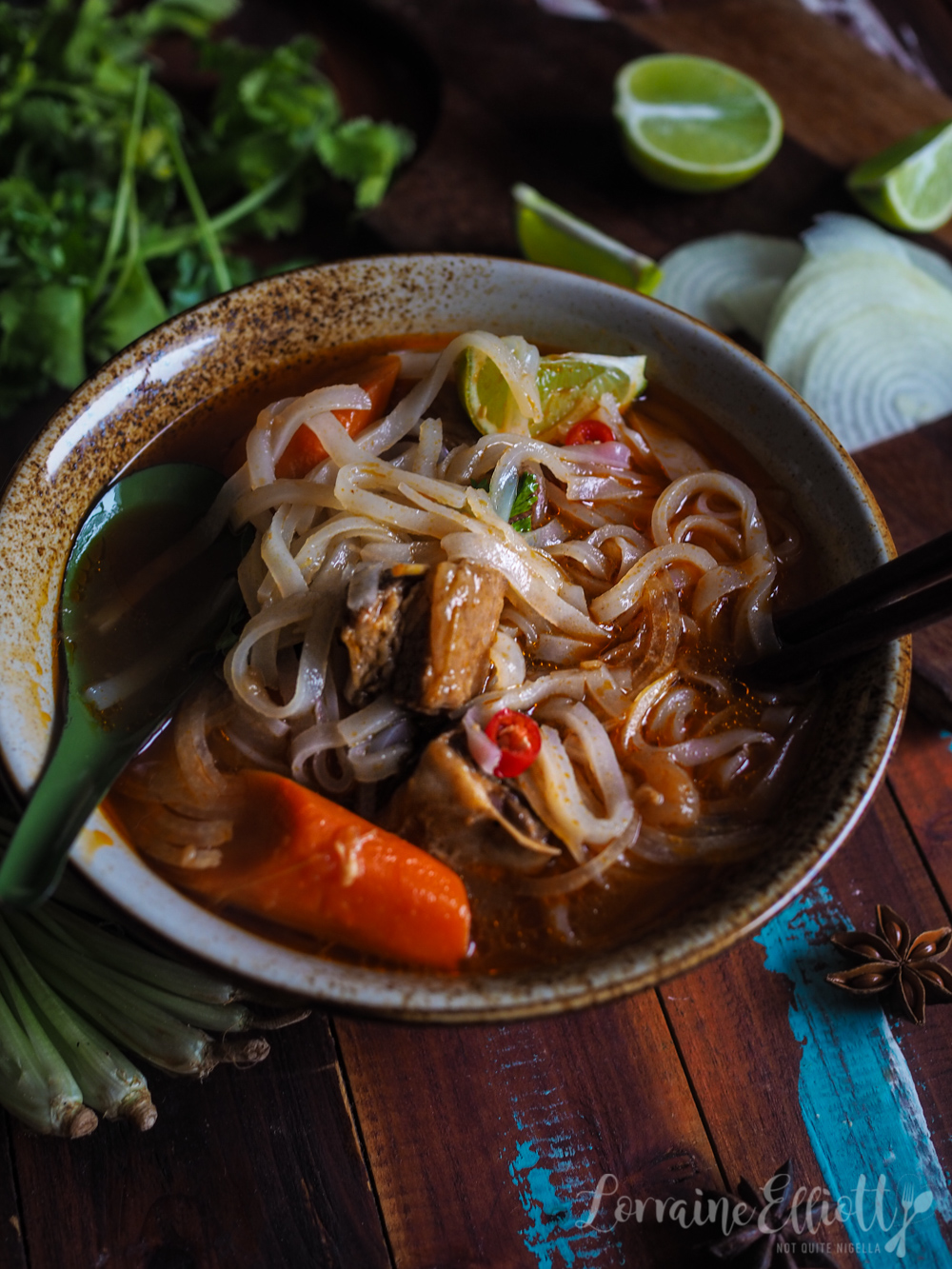 It ended with a surprise: they wanted to do a continuous video with each table (there were 180 guests) doing a special kind of dance. They came around to each table beforehand to brief us on the dance they wanted us to do. We were assigned the TikTok shuffle dance. Now this is not an easy dance, it's sort of really complicated and we were all completely unprepared for it. I didn't even know if I could do it without tripping over in my dress. But we all agreed to do our best and busied ourselves practising. We watched as they went around the room-there was the Thriller Dance for one table which seems so simple in comparison.

We braced ourselves for embarrassment and they approached our table. And then they completely bypassed us and the next table! I'm not sure why, and we weren't going to ruin their single take video or ask them but we somehow missed our chance to dance terribly for video. And the unanimous reaction was that of massive relief! And next wedding I'll make sure to practice it beforehand in case we get asked because you never know these things.

So tell me Dear Reader, how do you keep warm in winter? Are you good at dancing? Have you ever done the TikTok shuffle? 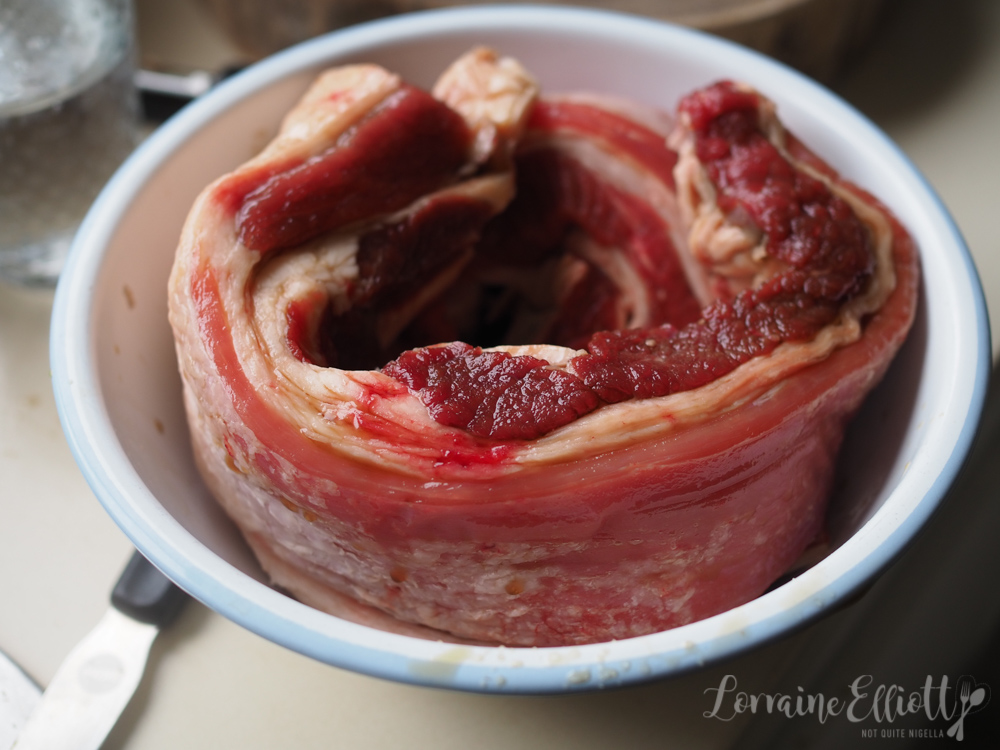 Step 1 - First marinate the beef. Dissolve sugar in the fish sauce add to a bowl with the beef flanks and allow to sit at room temperature for 15 minutes.

Step 2 - Meanwhile blend the lemongrass, garlic and onion. Peel the carrots and cut into large chunks. 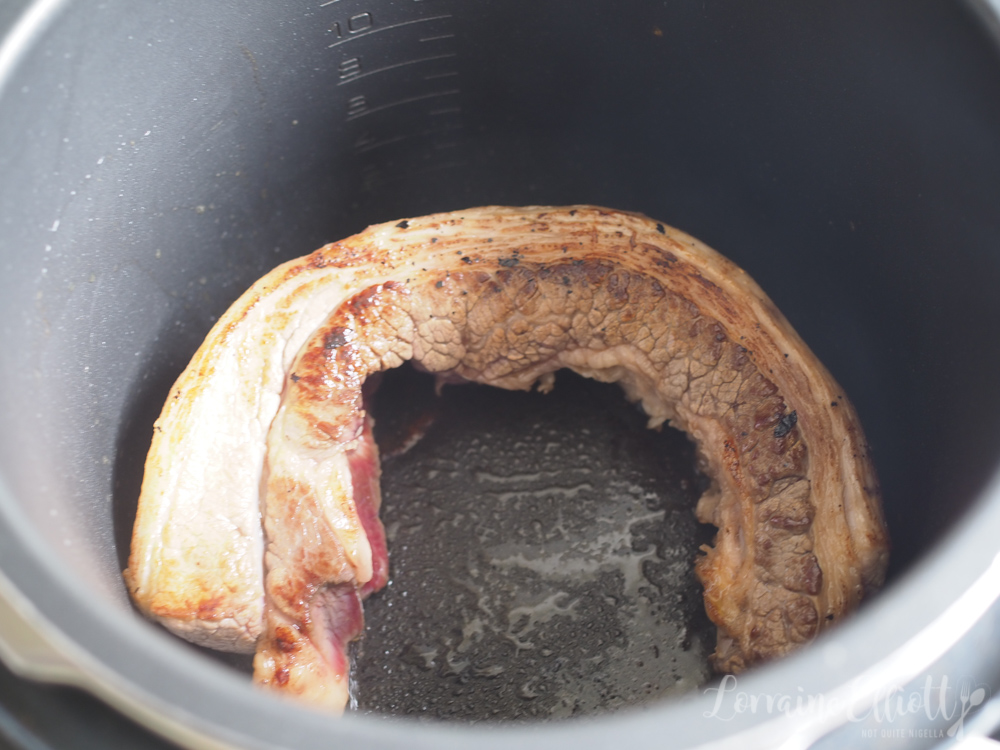 Instant pot/Pressure cooker directions: Set to saute for 20 minutes and then add oil and brown the beef all over and then remove from pot and set aside to cool off a little. Then add the onion and garlic mixture and saute until fragrant. Cut the beef into 1 inch or so cubes and add to the pot along with the lemongrass, ginger, stock, beef tendons, coconut water, cinnamon, star anise, cloves, five spice powder, chillies and annatto. Set to cook on high for 30 minutes and release the pressure naturally after this.

When the first 30 minutes is up and pressure is released, add the carrots. Set on high for 30 minutes and release pressure naturally. Simmer for 10 minutes. Season with sugar and salt if needed (it shouldn't need much at all). 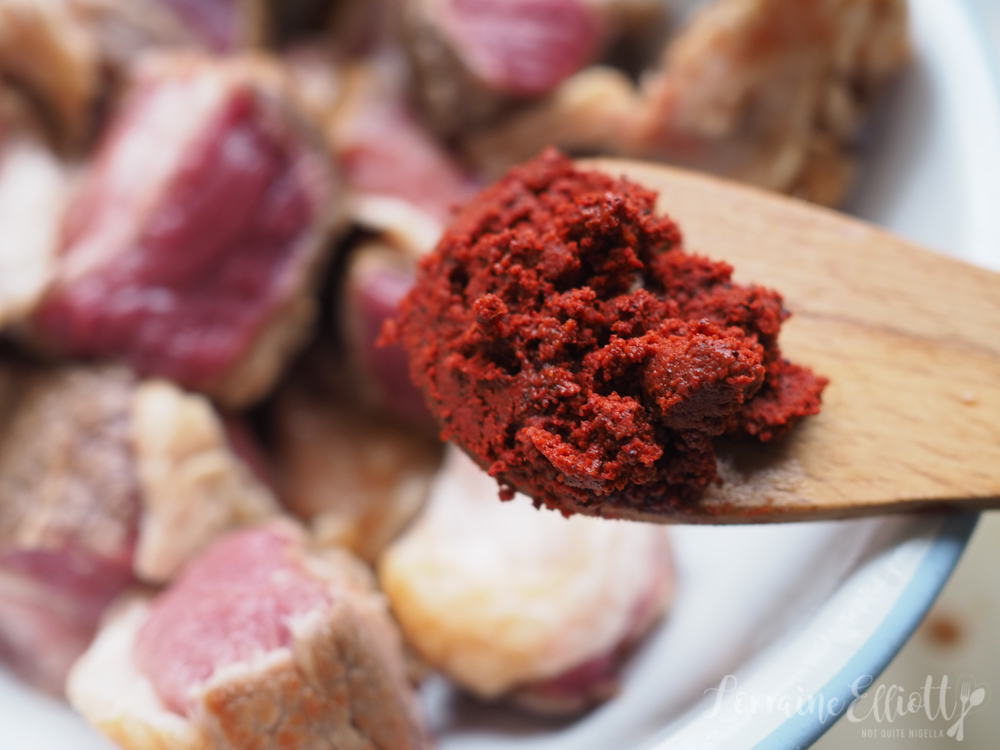 Slow Cooker Directions: In a frypan or skillet add oil and brown the beef all over and then remove from pan and set aside. Then add the onion and garlic mixture and saute until fragrant. Deglaze the pan with 1/2 cup of the stock making sure to get all those tasty bits that have stuck to the pan. Cut the beef into 1 inch or so cubes and add this and the deglazed liquid to the slow cooker along with lemongrass, ginger, stock, beef tendons, carrots, coconut water, cinnamon, star anise, cloves, five spice powder, chillies and annatto. Set to cook on high for 8 hours. Season with sugar and salt if needed (it shouldn't need much at all). 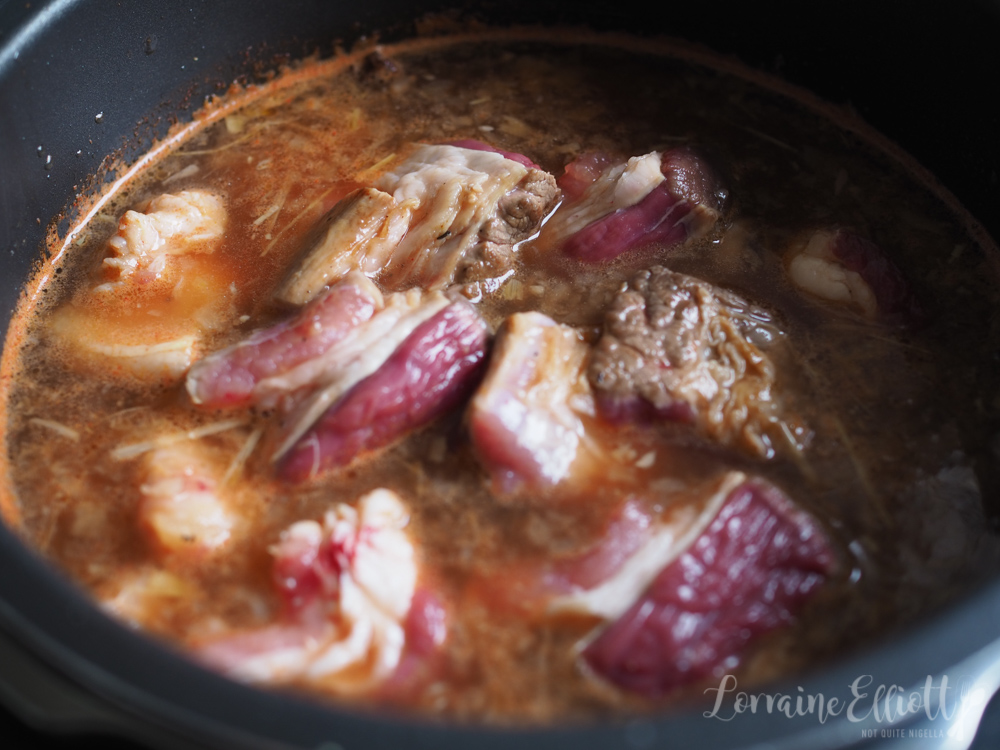 Stovetop Directions: In a large cast iron pot add oil and brown the beef all over and then remove from pot and set aside. Then add the onion and garlic mixture and saute until fragrant. Cut the beef into 1 inch or so cubes and add to the pot along with the lemongrass, stock, ginger, beef tendons, coconut water, cinnamon, star anise, cloves, five spice powder, chillies and annatto. Bring to a boil and then reduce to a simmer and cook for 3 hours.

After the 3 hours add the carrots and remaining stock and cook for another 1 hour. Season with sugar and salt if needed (it shouldn't need much at all). 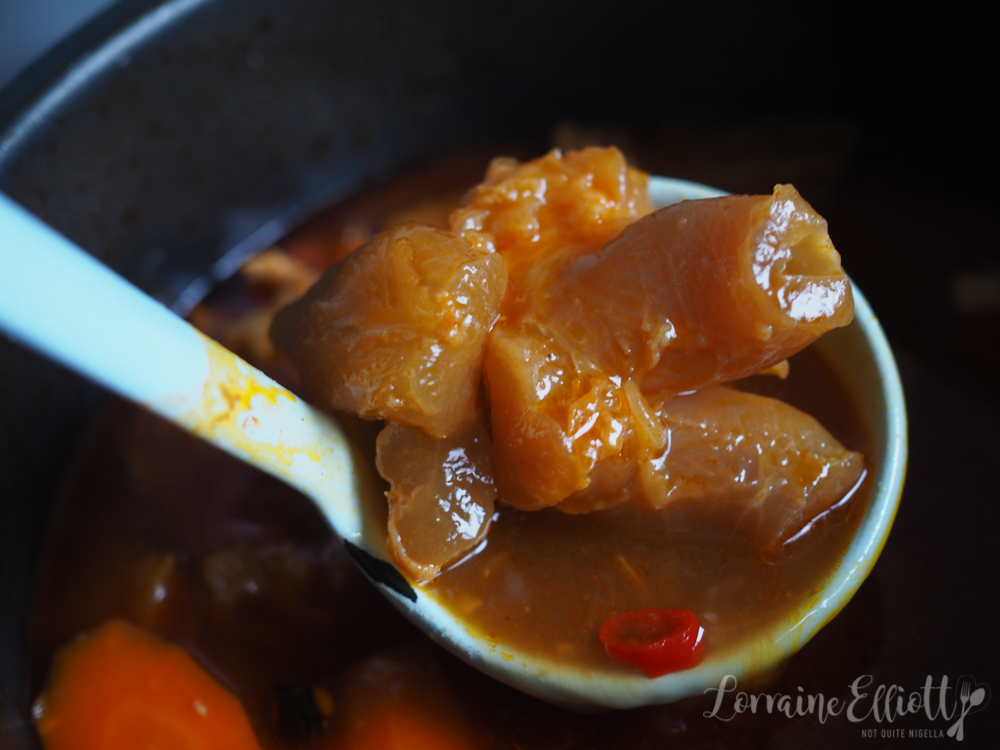 The tendons once cooked

Step 3 - To assemble: Skim the fat off the top of the soup and remove the tendons. Divide rice noodles into portions and place each portion in the microwave and cook on high for 1 minute. Place into bowls and ladle soup over adding carrot pieces and beef pieces. Add some finely sliced onion on top and serve with lime wedges, coriander, lime, bean sprouts and extra chilli. 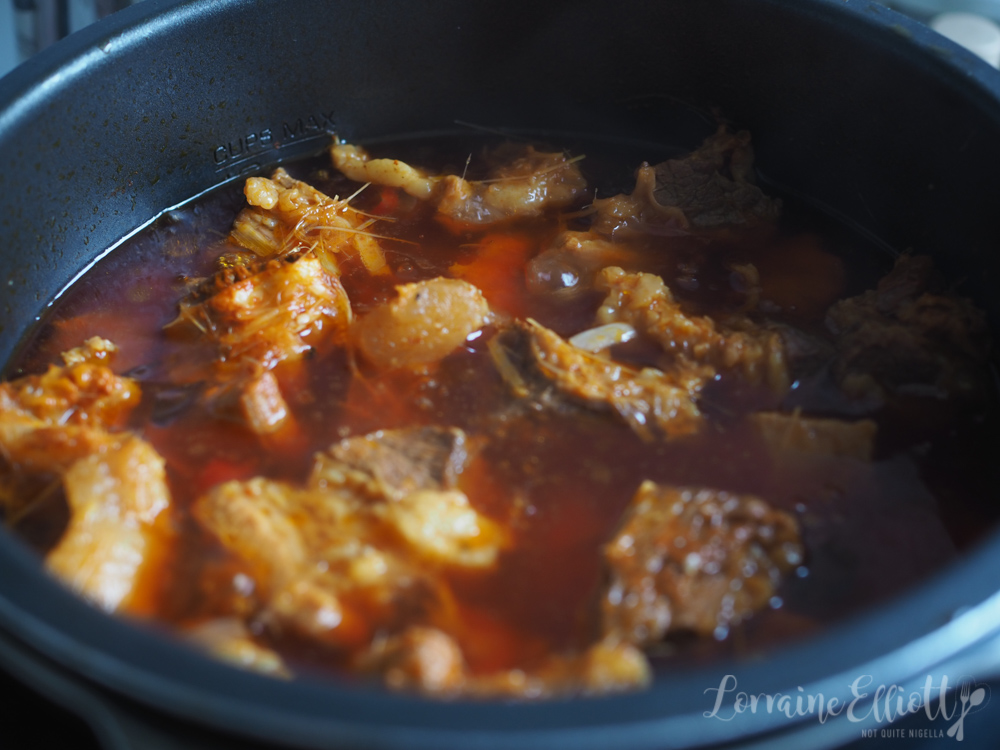 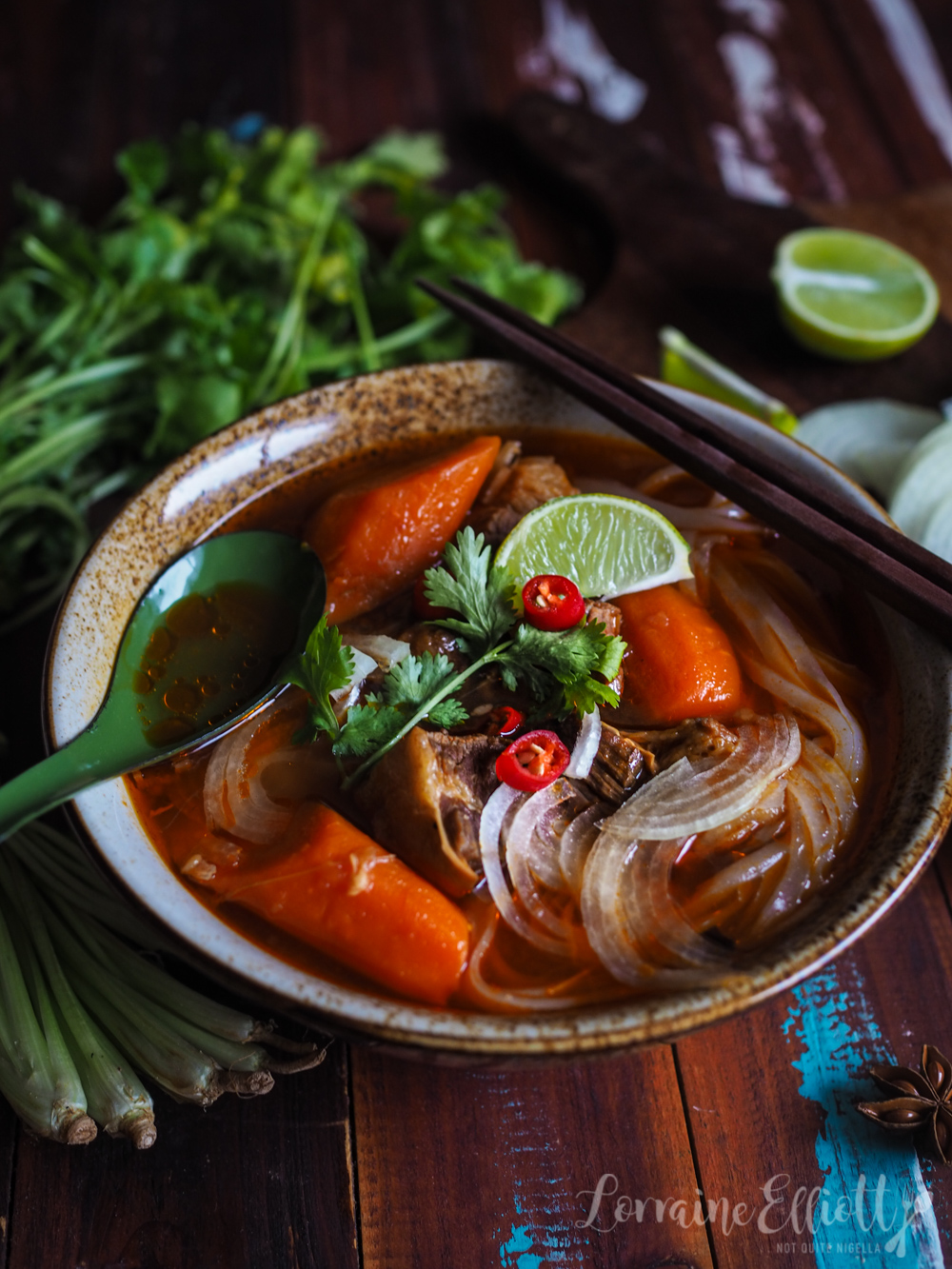