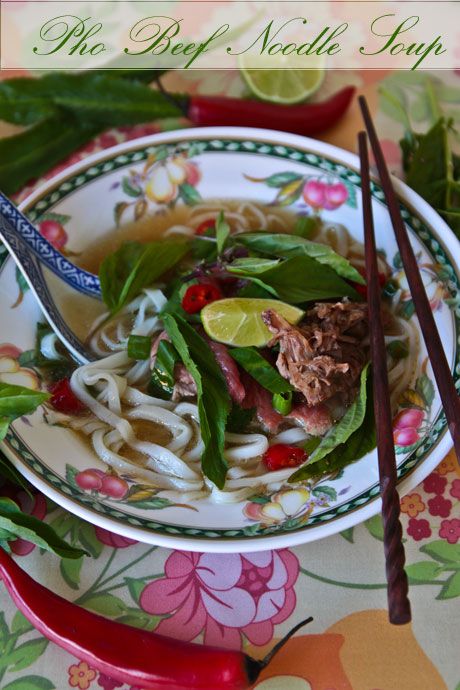 Have you ever been intimidated by certain words? As the borders between countries shrinks and the world gets closer and closer, there are "foreign" words that have now become part of the lexicon. Some of them are easy to pronounce and some of them are downright difficult. I had an assistant during my advertising days who was adorable and used to pronounce Versace as"Versaitch." I'm not immune myself and designer names such as Loewe (lo-EH-veh) and Hermès (air-MEZ) have flummoxed me.

One of the most brutal places to learn whether your pronunciation is rubbish can be at a restaurant. My Chinese language skills are extremely limited (ok they're pretty much nothing) and I've lost count of the number of times where I've tried to order something only to be given a blank look. Tones count in Chinese and apparently I'm tone deaf.

After my recent trip to Vietnam, I've become a little bit obsessed with Vietnamese food. And one of those flummoxing words is Pho. Eager to know more about it, I sat down with Vietnamese Australian chef Luke Nguyen from Red Lantern restaurant. My first question, before I embarrassed myself any more was how was Pho pronounced. According to Luke it is pronounced as "fur" but the end of the word goes up as if it were a question. 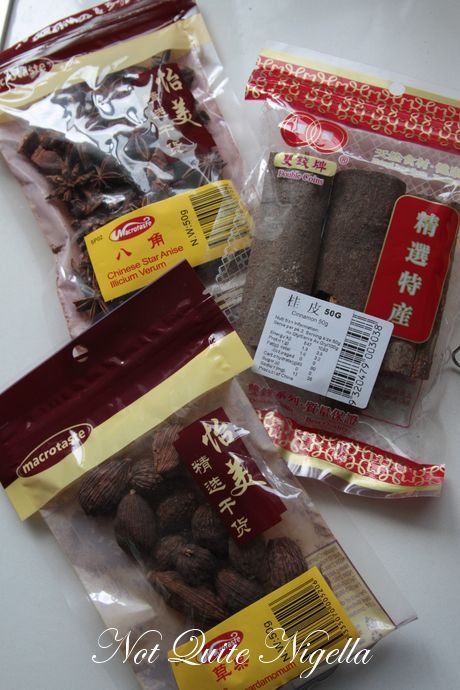 Phew! Now that I had that out of the way and I had practiced the word I asked him what makes a good Pho. "The hero of any pho is the broth" he says. "I was taught from a very young age to put a lot of love into the broth...for me if I have a bowl of pho and try the broth and I can see that it has been simmering for only two hours, I get very disappointed" he says shaking his head. "It needs to be at least eight hours - at least. Some are simmered for 20 hours." He explains the time is necessary to extract all of flavour from the bones and vegetables.

The produce used in them is also very important as well as the treatment of the vegetables. "Put a lot of love into roasting your vegetables" he says. Luke chars "then chars the hell out of" the vegetables on the grill and  which brings out the flavours and then removes the blackened parts so that it doesn't colour the broth. And interestingly he uses pineapple to lend a sweetness to the broth. He also talks of a variation on the traditional beef pho, a salmon pho which his partner Suzanna, a pescatarian makes. It is simmered for less time than a beef pho and uses more lemongrass and ginger as the main flavours.

One need to use "good quality bones with lots of meat and lots of marrow in them too" he adds and unlike some advice which says to blanch the bones in boiling water he doesn't as he feels that it washes away the flavour and instead he spends more time skimming the broth.

Pho is a dish that he often eats when he is sick. "A lot of families put in about five or so herbs, I put in around 13. Not only the cassia bark, cinnamon and cloves but I put in a lot of a selection from Chinese herbal medicine." He uses cassia bark instead of cinnamon as he finds that there is more flavour as well as the Vietnamese cardamom pictured below and sawtooth coriander. He makes weekly trips out to Cabramatta which is where Red Lantern gets much of their produce from. 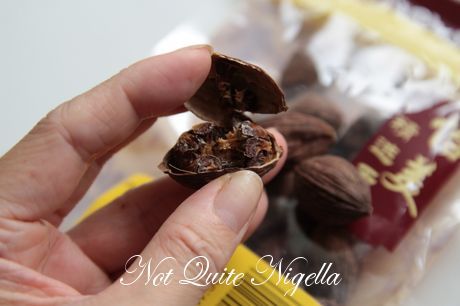 Inside the Vietnamese or black coriander

There are differences in the pho from the north and south of Vietnam. Luke's family is from the south but he describes the north Vietnamese pho as "very clear, they don't use a lot of the spices. In the south they pack in a lot of flavour and it's a little bit darker." The north pho is less likely to have the herbs, bean sprouts or sauces as it is colder there whereas they grow these abundantly in the south. "It's very minimal in the north, they like to appreciate the flavours" he says. And Luke talks about the French influences with pot au feu being a similar dish to pho.

This recipe for Pho came from a cooking class I did in Vietnam at the Sheraton Nha Trang which was one of the best cooking classes I have taken. Chef Hung took great pains to teach me all of the fiddly details that ensure the success of a dish even giving me exact gram measurements for things. To make it as authentic as possible, Christie and I went for a day trip out to Cabramatta to get some harder to find ingredients such as eryngo (Vietnamese or French sawtooth coriander), cassia bark which is larger than cinnamon and resembles a large fold of tree bark and Vietnamese cardamom which comes as black oval pods rather than the green cardamom pods. 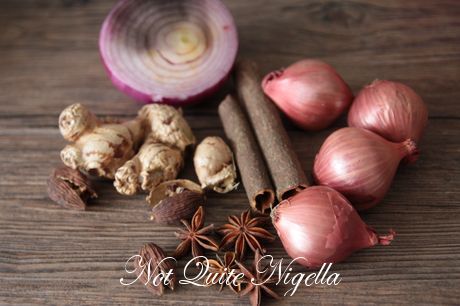 It does take some time and most of that time is really in the making of the broth which, if done well, is layered and deeply flavoured with hints of star anise, cardamom, ginger and cassia. Many purists will say not to rush it and I can imagine that it would certainly affect the flavour of the broth as I saw it change over time. But once it is simmering you really don't have to do much except for skimming it once every hour or so and it makes a lot of soup-I ended up with about 4-4.5 litres of it which was perfect for freezing and using if you are in need of a hit of pho. There is a deeply sustaining fragrant beef broth, thinly sliced beef tenderloin which is served raw but then cooks in the steaming hot soup. This contrasts with the  soft beef shin meat, heat from the chilli and freshness from the sheaf of mint, Thai basil, eryngo and green onion.

Luke recalls times making the pho broth. He would start it the evening after service had been completed as he needed the whole kitchen for it. He would then leave it overnight with the lid on on low heat. "I'd come back in the morning and as I came down Crown Street I could smell it. I'd turn the alarm off and open it and it's my favourite part of the day opening the broth up and eating the meat that has been braising."

So tell me Dear Reader, what is your favourite Vietnamese dish? And if you could sit down with a chef and talk to them, who would it be? 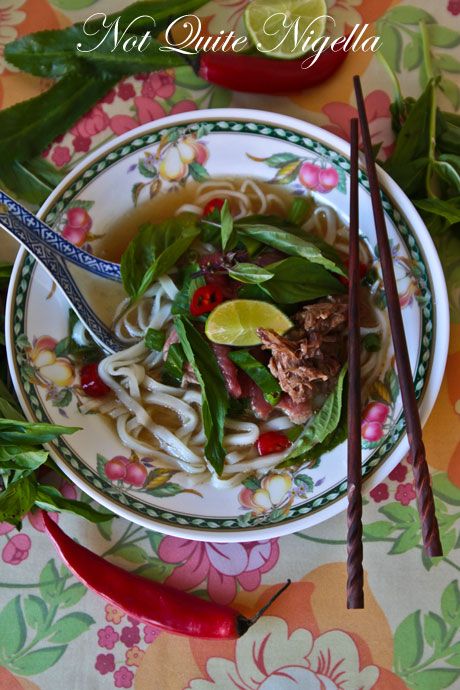 Recipe adapted from Chef Hung at the Sheraton Nga Trang

Buyer's tip: I have only managed to find eryngo and Vietnamese cinnamon in Cabramatta but have found the Vietnamese cardamom at large Asian grocery stores in Chinatown (the one in World Square has it) in the spice section. 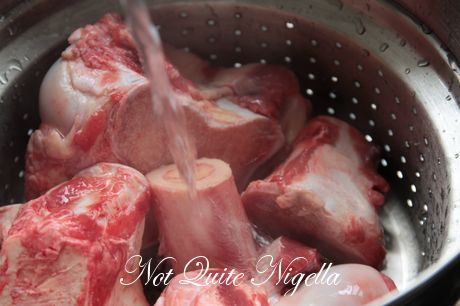 Step 1 - Put a kettleful of water on to boil and pour it over the beef shins to get rid of any bones and dirt. In a very large pot (I used my largest pot that could fit 10 litres), put 5 litres of water on to boil. Once boiling, add the bones and simmer for 3 hours. Every hour or so skim the fat from the top and remove the scum using a slotted spoon. There will be quite a lot of fat coming from the shins from the marrow etc. 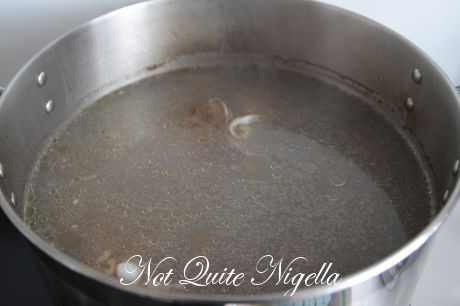 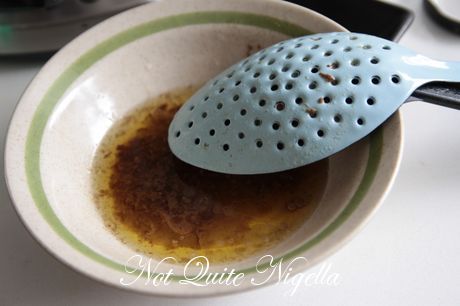 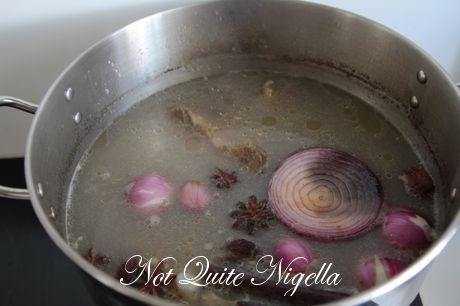 2.After three hours, add the eschallots, onion, ginger, cinnamon, Vietnamese cardamom and star anise and simmer for two and a half hours. I asked Chef Hung if I should add these at the beginning but he recommended against it as he said that it would be too strong. When this is done, do a final skim for fat and scum and strain the soup. Remove some of the meat from the shin bones and keep the broth hot. 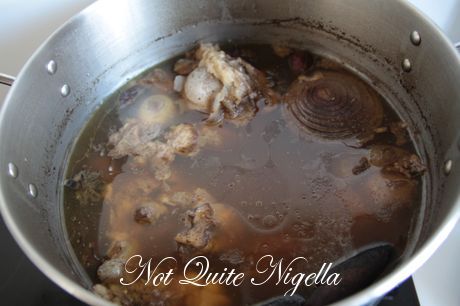 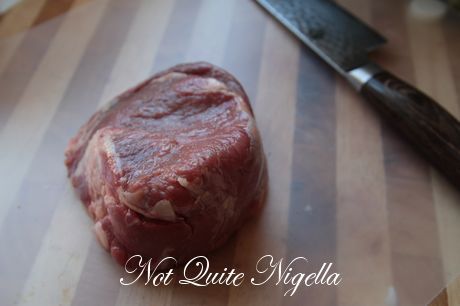 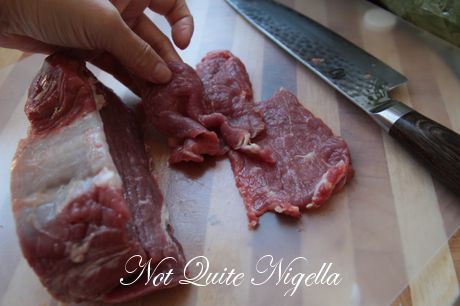 Step 3 - Slice the beef tenderloin very thinly, as thin as possible as you want the hot soup to cook it. It is easiest to do this when it is frozen or partially frozen. Place a handful of fresh rice noodles and the thinly sliced beef tenderloin in a bowl. Add a little of the meat from the beef shin. Ladle over with the hot soup which will cook the raw beef and change it from pink to grey. Serve with fresh Thai basil, mint, eryngo, lime, chilli and bean sprouts and add these as you feel like. 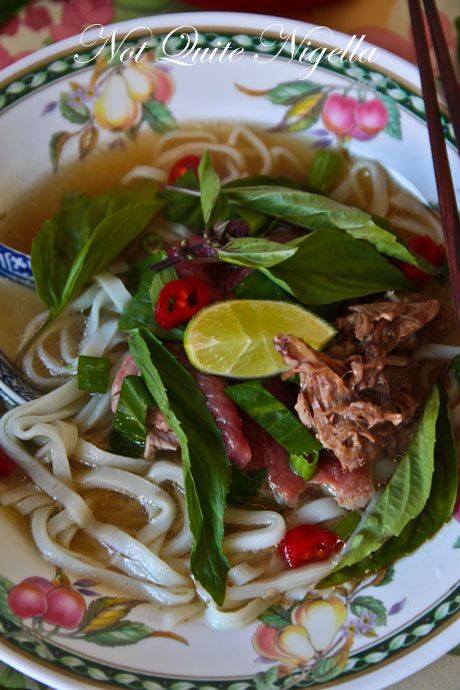