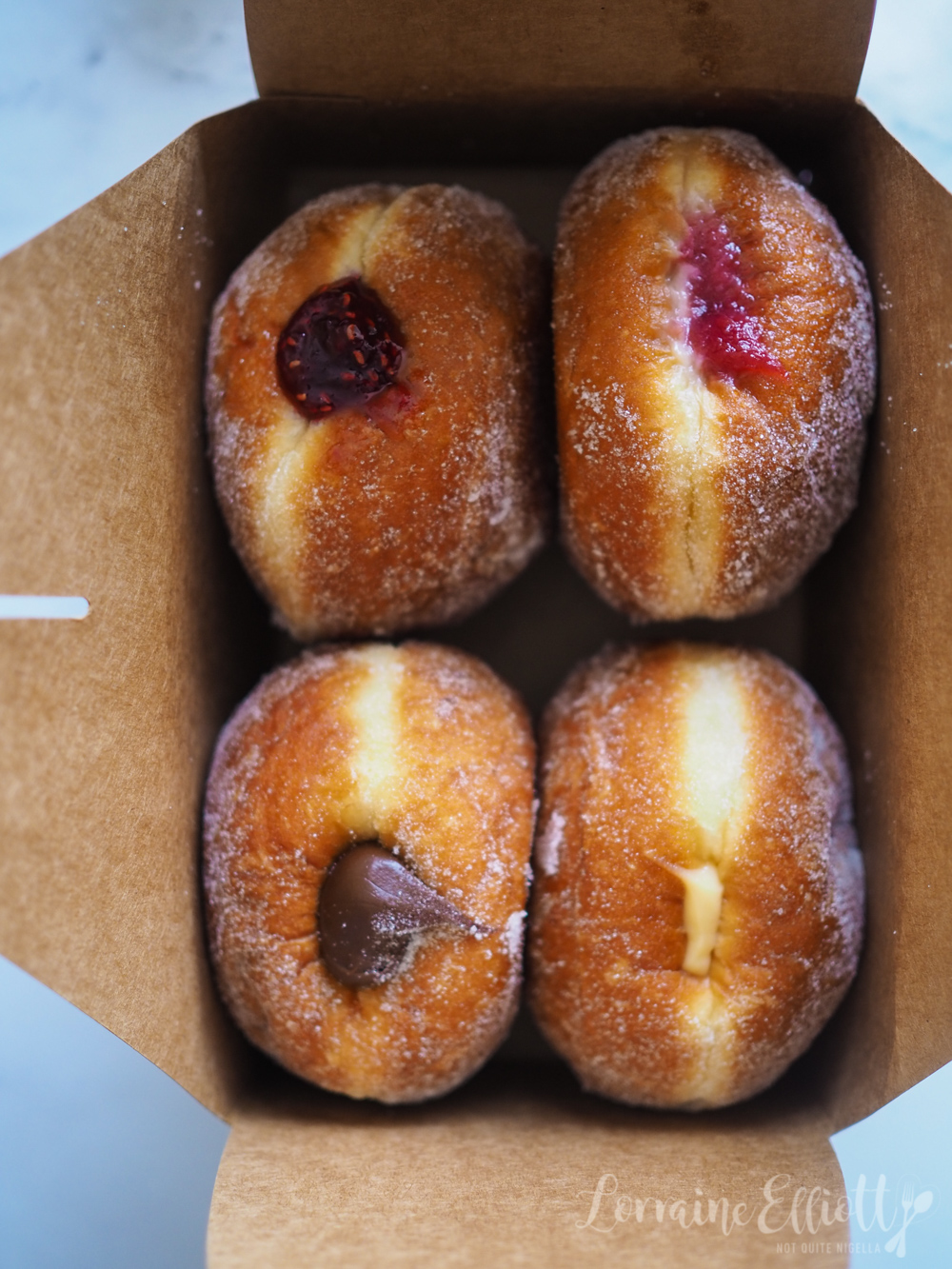 The first time I tried Berliner Donuts was when Monica sent me a box for my birthday and I fell hard straight away. My teeth sunk into a light, puffy dough only to be rewarded with the silkiest custard and rhubarb filling. After that I joined their legions of fans and every time I saw them pop up at events like markets or the Easter show, I'd always buy one. 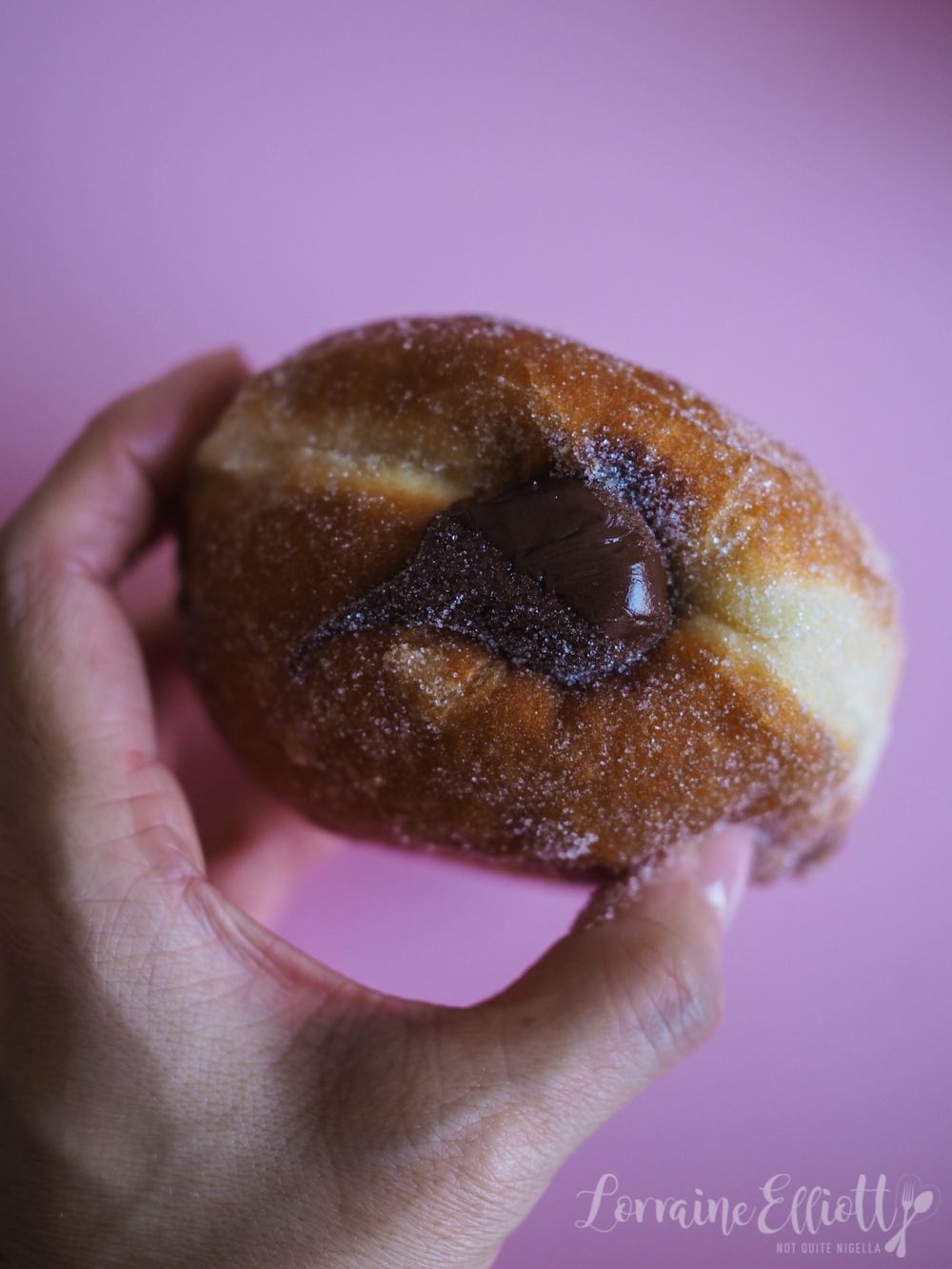 Berliner Donuts was founded in 2018 by Rachael and Vange Kourentis. Rachael is the trained pastry chef with a visual arts background while Vange looks after the business side with a sports marketing and digital background. "Vange is Greek/English and grew up on the outskirts of north east London and I am Maltese/Australian & grew up in Sydney. Whenever we would go to Europe, the first thing I would look for were the amazing bakeries & food markets," says Rachael. The two met in 2004 in Greece and settled in London and the idea for Berliner Bakery came from one of their visits to Borough Markets. 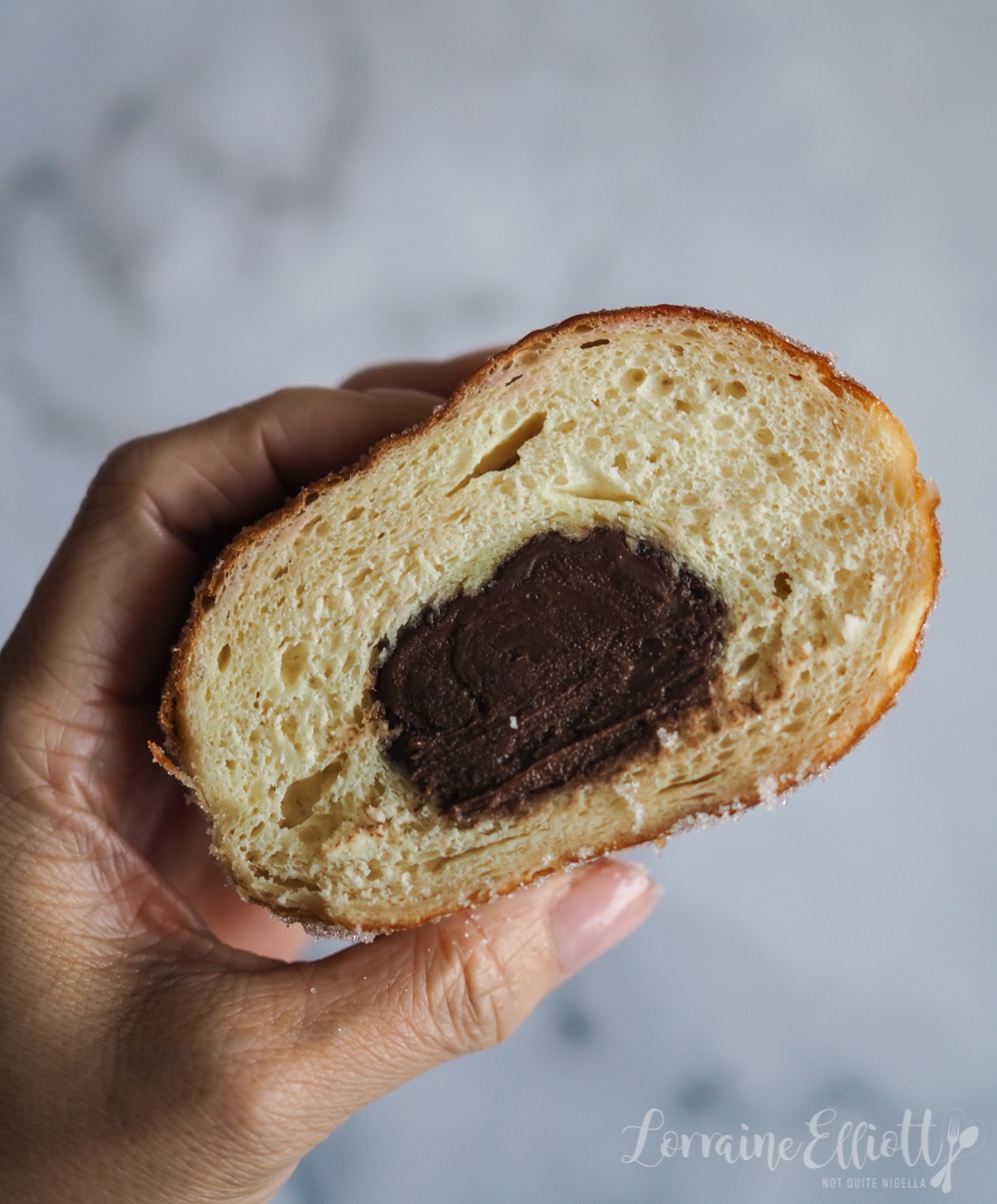 "In 2017 I returned to Sydney with our son Alexander while Vange finished up working in London. After 7 years...I decided to study retail baking and patisserie. Part way through the course I had a strong urge to start making Berliner Donuts with all kinds of different delicious fillings. My plan was to create something light and fluffy that wasn’t too indulgent and could be eaten weekly, with classic, old-fashioned flavours like rhubarb & custard, lemon curd and homemade raspberry jam," says Rachael. 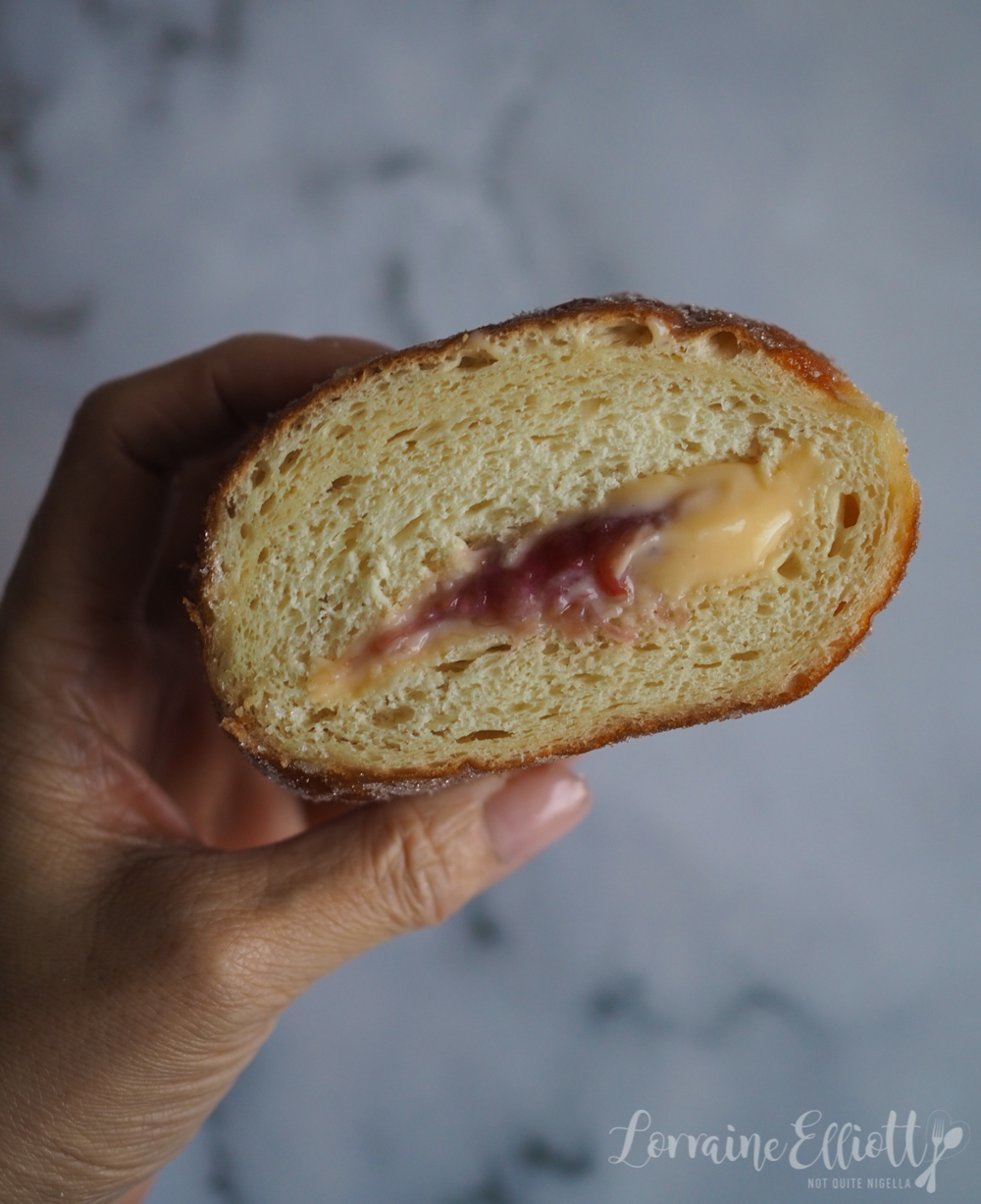 "I had no idea how to would orchestrate any of it, but was determined to do at least one market stall to prove to myself I could do it. I barely slept for 3 months before the first market at Orange Grove thinking about how I would do it, meticulously testing recipes to create a light and airy donut. With the help of Vange, the first market led to us doing around 8 markets a week, as well as big monthly markets and festivals and excitingly, the Sydney Royal Easter show this year!". All of the ingredients from the dough to the jams are made from scratch using produce from the farmers markets that they attend. 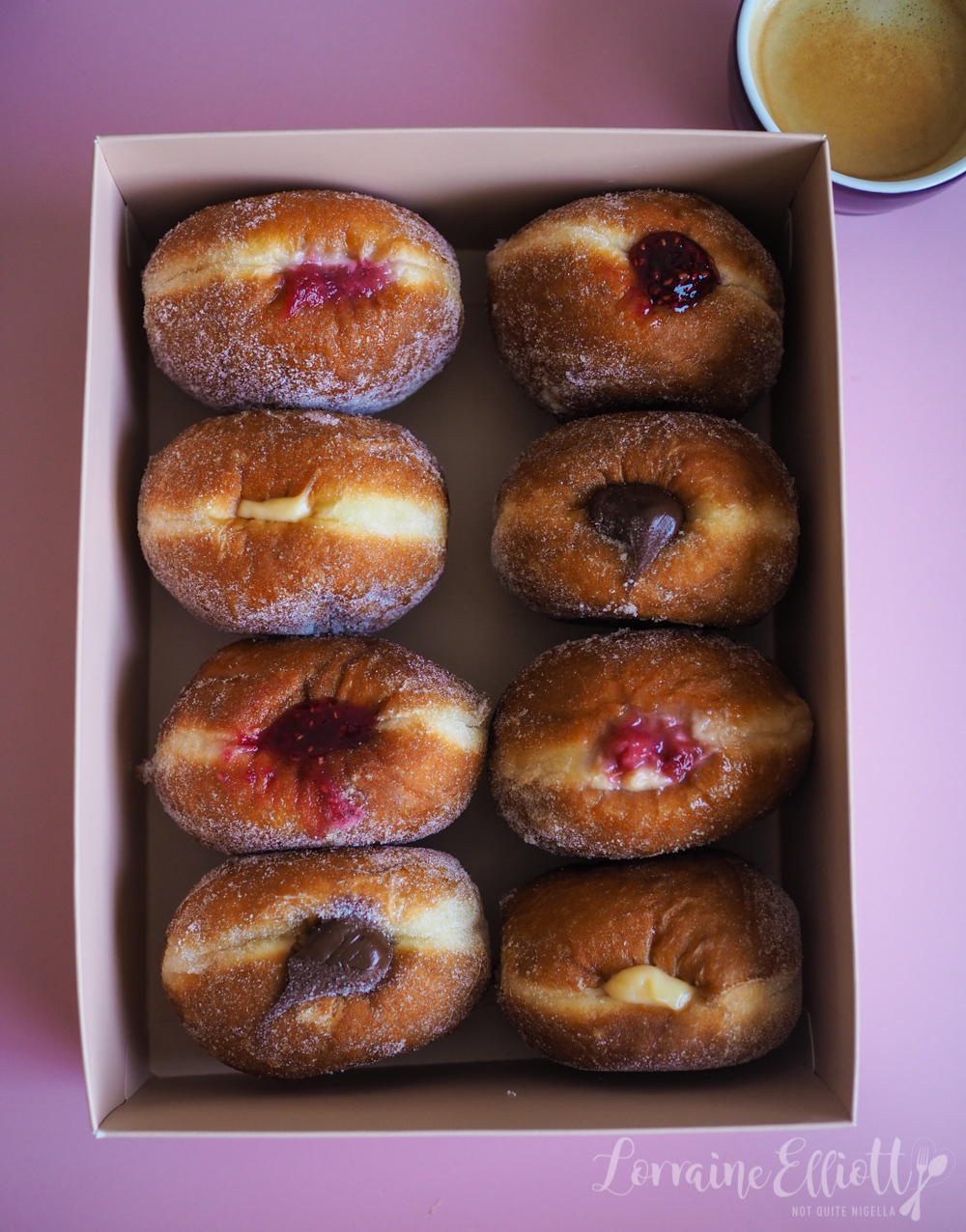 Rachael says, "This year's lockdown has had a different feeling to last year's. People this year seem eager to hang onto some semblance of routine by attending their weekly local market. The amount of people that tell me their weekly Berliner is all they have been looking forward to all week is astounding and heartwarming." Now they are regulars at a range of markets during lockdown (see below). 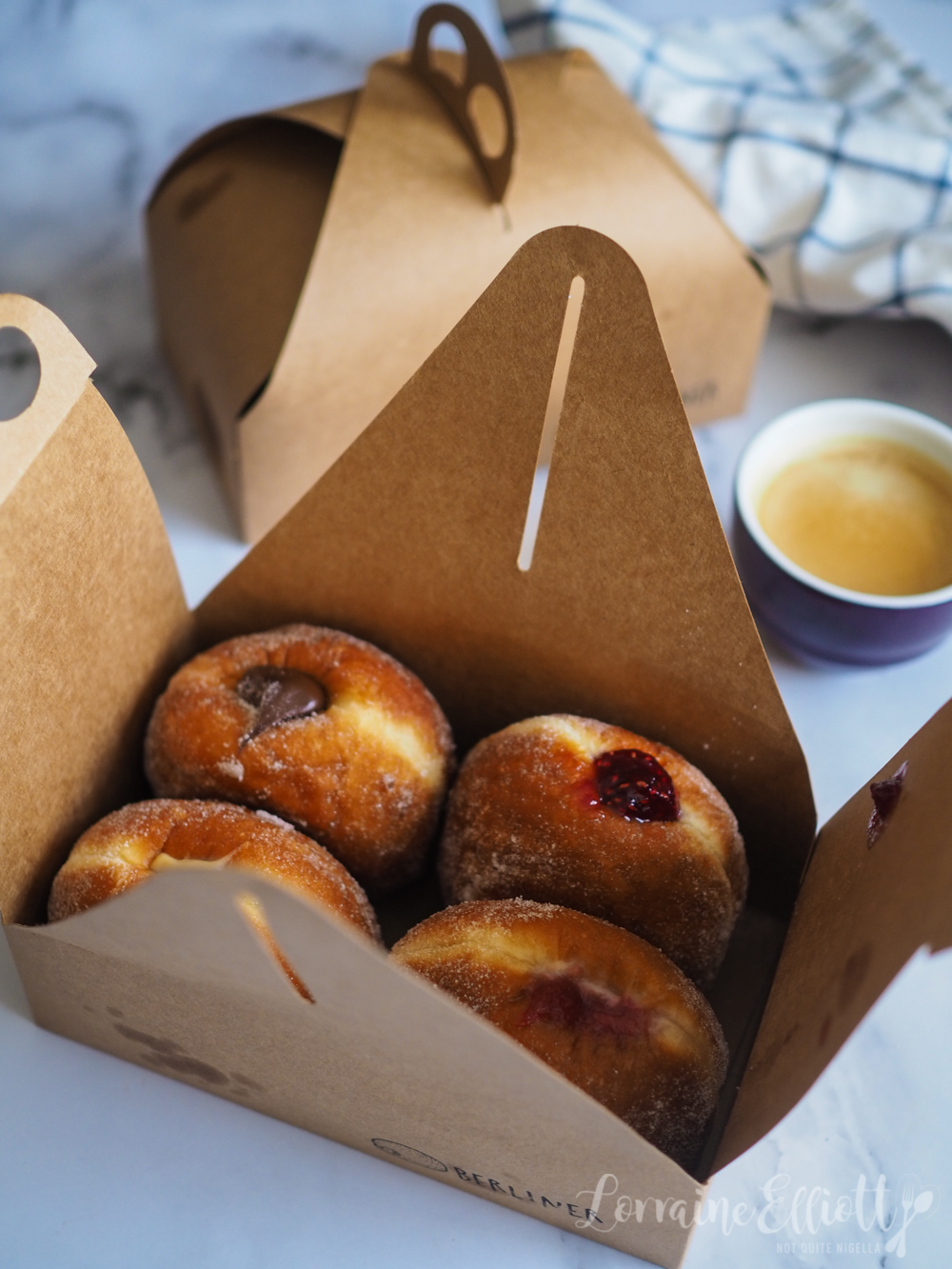 Apart from selling at markets, Berliner also do a fast trade in home delivery to Sydney CBD, Inner West, Eastern Suburbs the Lower North Shore of Sydney. All you have to do is order by midnight 2 days before and they will deliver between 8am-6pm on Wednesday, Thursday, Saturday and Sunday every week. A box of 4 Berliner donuts is $25 and delivery is $5 or free for orders over $60 and they come in a recycled cardboard box. 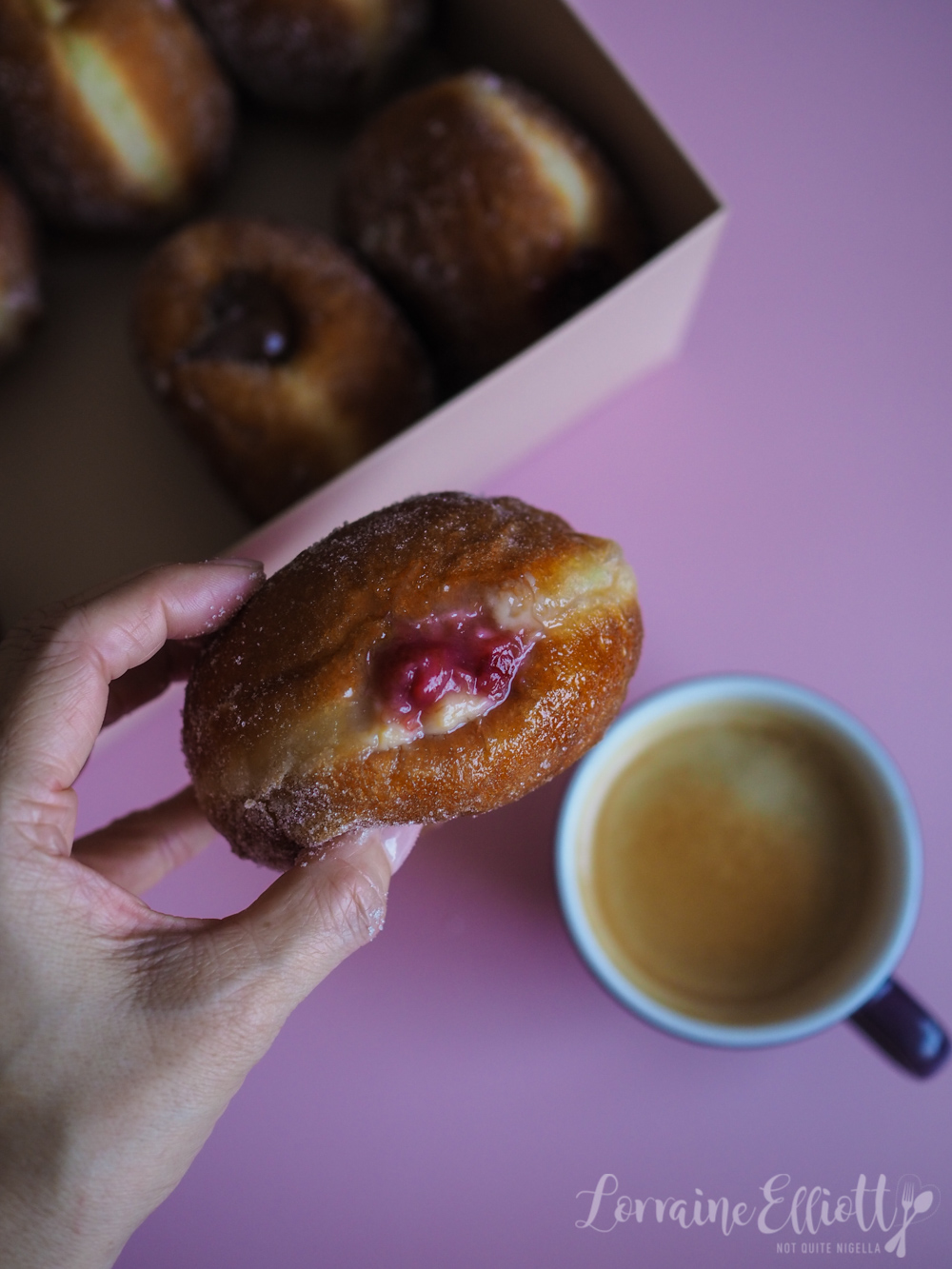 With the COVID-19 numbers looking so gloomy and depressing I was in need of a donut fix so I placed an order for a mixed box of donuts. I usually order the rhubarb and custard but this time I thought I should try the other flavours too. There are four flavours in a mixed box: vanilla custard, Nutella, raspberry jam or rhubarb & custard. 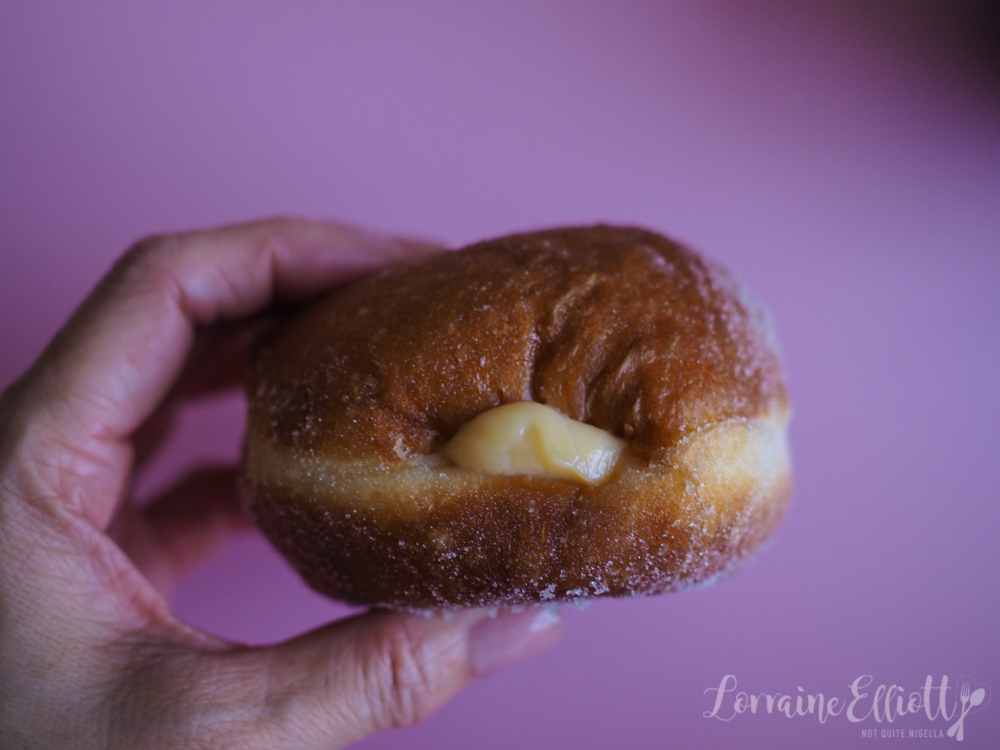 "A good Berliner to me has to have the white band around it. This way you know it has risen the perfect amount & is light & fluffy inside. Butter is pretty important to the taste! Also, a hugely generous amount of filling!" says Rachael describing the perfect Berliner.

Indeed the Berliner dough is perfection - light but with substance it's impossible to just have one bite. The custard has the perfect consistency with the perfect ooze while sweet toothed Mr NQN adores the Nutella berliner. As for me I love the tart sweetness of the raspberry jam which is a close contender with my favourite rhubarb and custard. 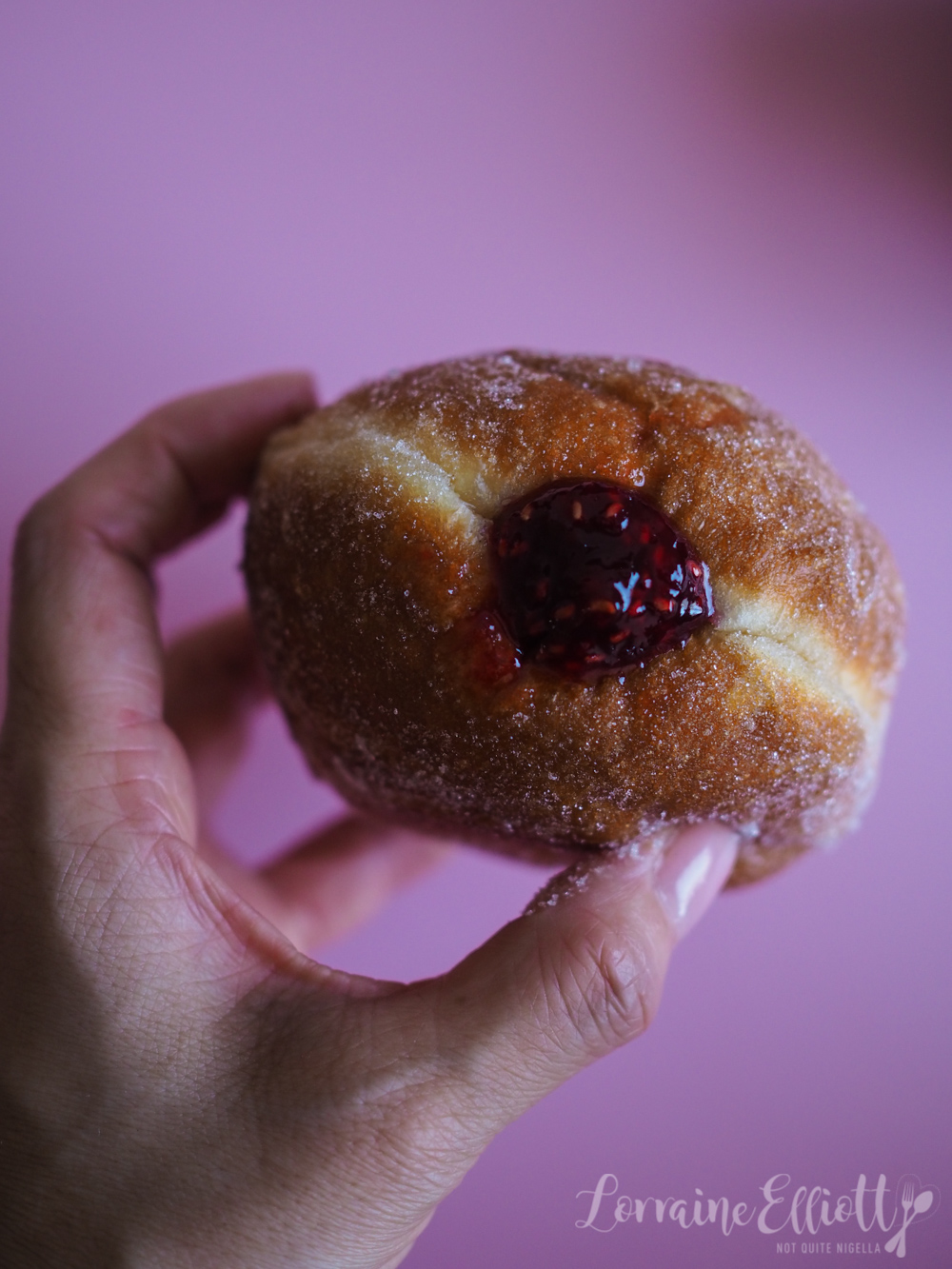 They may occasionally do brown sugar salted caramel donuts or ones filled with Portuguese passion fruit custard or Pavlova. "We might do an apple pie flavour soon, but most people want their faves ever week," says Rachael. And come Father's Day coming up they're doing a special Father's Day box with 3 Nutella, 3 Raspberry jam, 3 Rhubarb & Custard and 3 Vanilla custard donuts for $75. 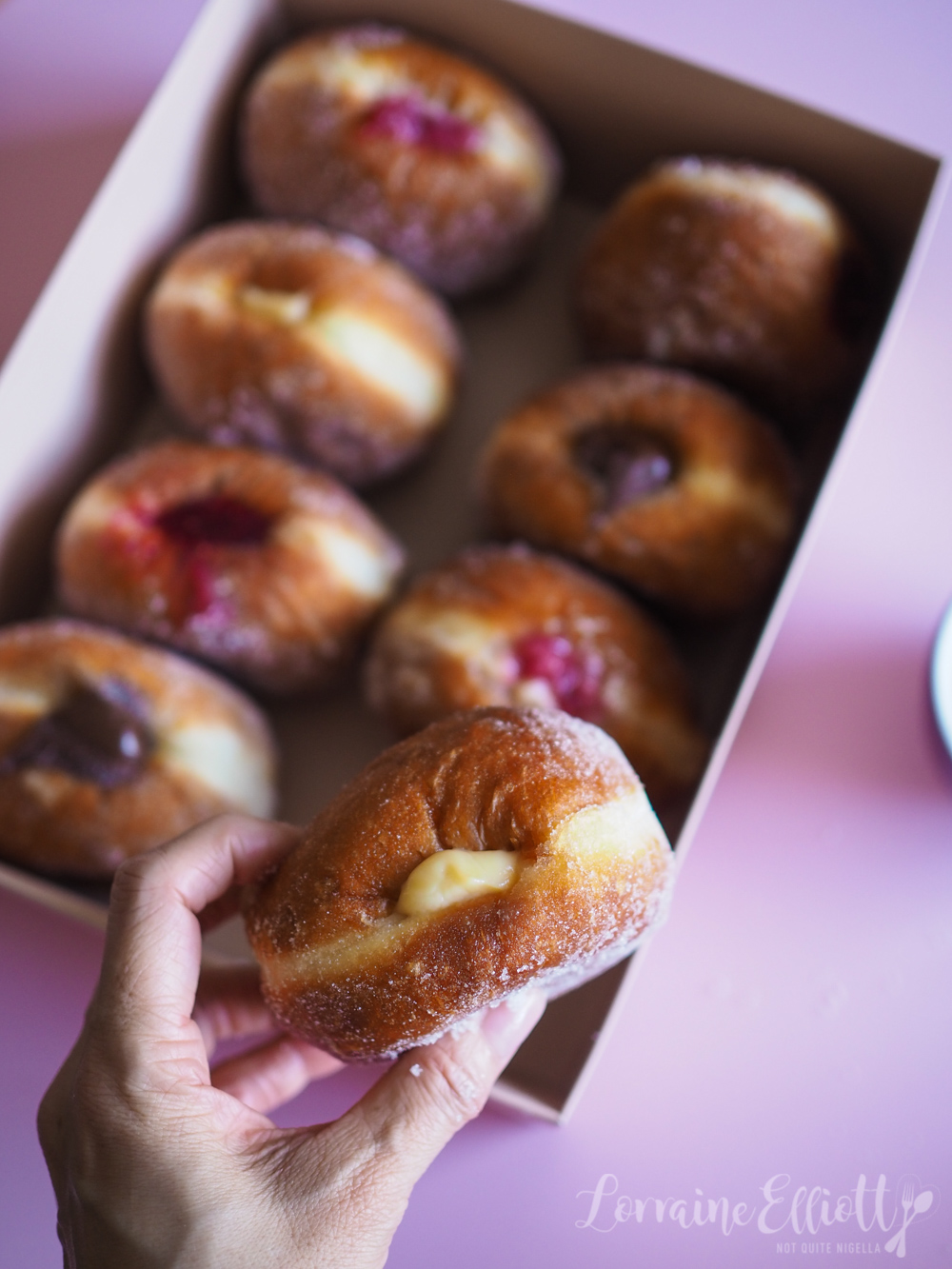 "The best part of the markets for me is the smile on people’s faces when they share their stories about donuts. I wish I could record every one of them. German, Polish, Jewish, Hungarian mothers and grandmothers making their own Berliners. The German New Year’s Eve tradition of putting mustard in one of the donuts instead of jam for one lucky receiver. Brazilians, Dutch, Portuguese, Columbians, French, Spanish, Italian people wanting a taste of nostalgia with the custard and Nutella ones. People from Adelaide where Kitchener buns and Berliners were huge, Victoria with its AFL donut tradition and 24hr donuts shops, locals reminiscing about long gone bakeries in Rose Bay where they’d eat donuts after a day at the beach, or recalling magical trips to Europe where they would treat themselves to donuts after a walk up to a castle. Everyone has a name for a donut and everyone has their own version and it unites us in happiness and pleasure," says Rachael.

These donuts were independently paid for. 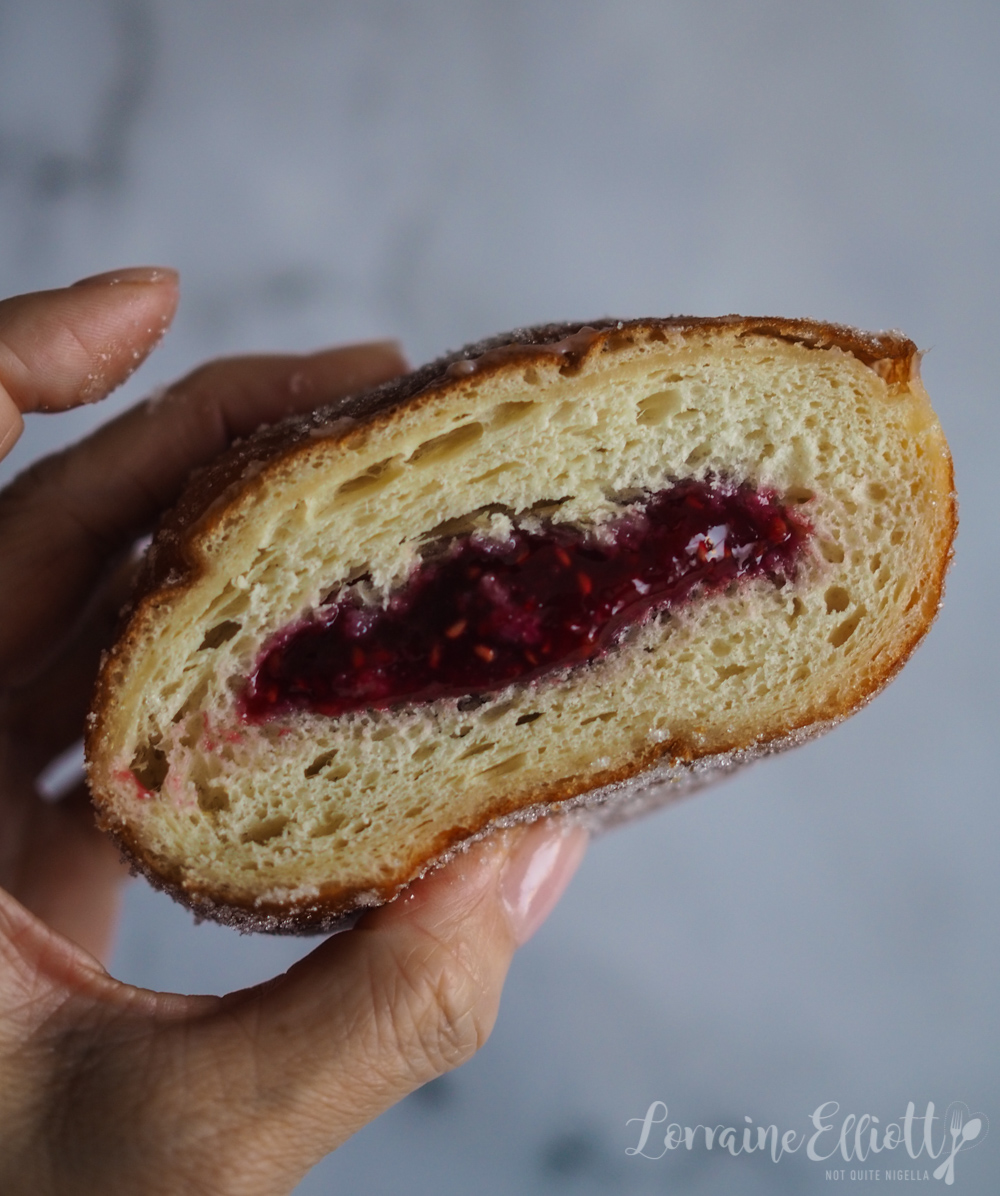