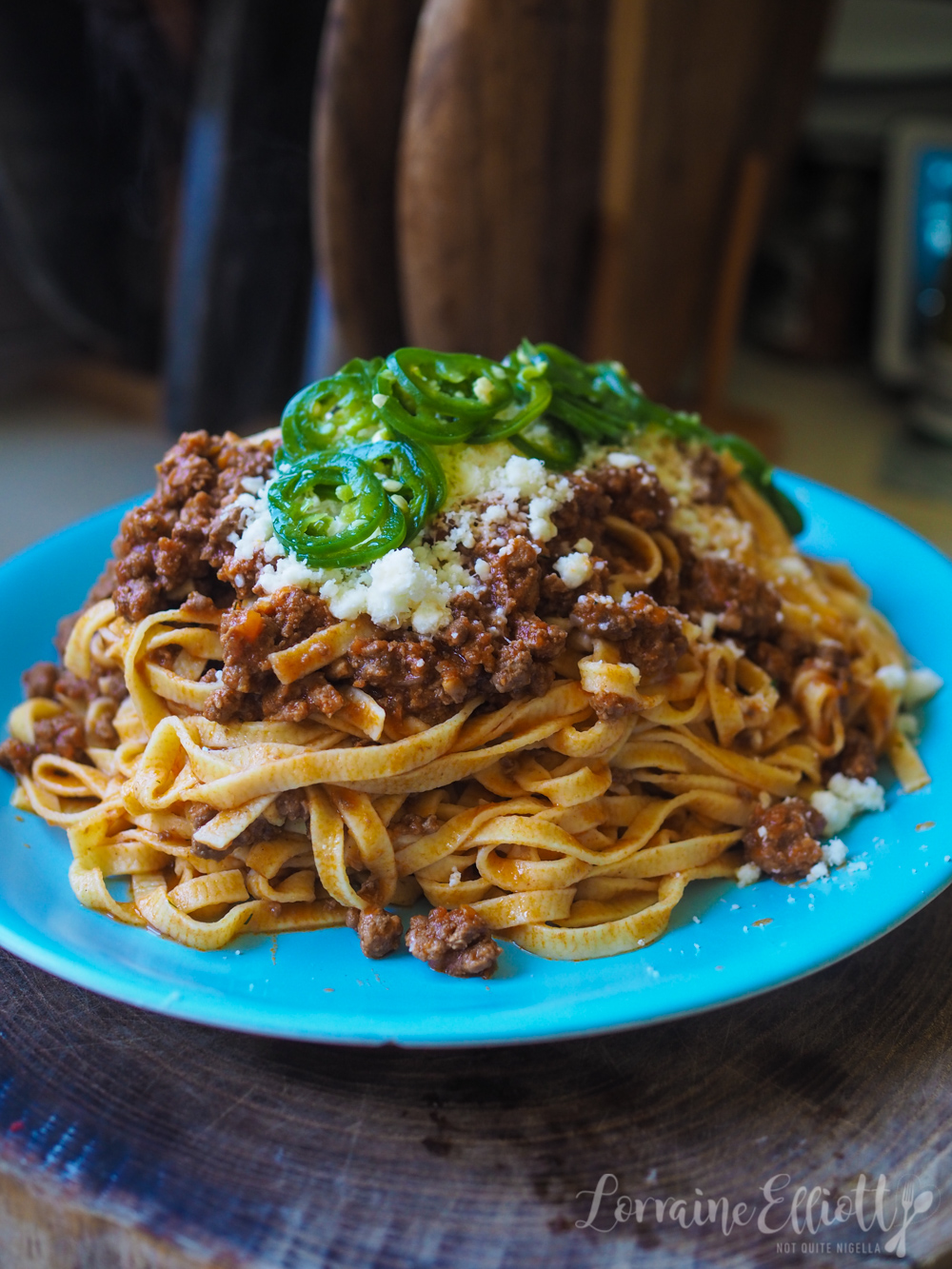 You have to get in fast to nab an order of Pasta E Basta by chef Akira Urata, the former chef at Fratelli Paradiso. Every week he sells hundreds of orders for this fresh, restaurant-quality pasta home delivered across Sydney. The menus change weekly and it can be anything from a free range lamb ragu with linguine to a scialatelli with mussel and saffron cream sauce and basil pesto!

Italian food was always going to be the destiny for Osaka-born Akira Urata. His first job at age 18 was at an Italian restaurant in Japan without any formal training where he worked 16 hour days, 6 days a week. It was a volatile working environment with pans thrown daily. For the first year he only cooked staff meals but progressed with hands-on experience. "Back in the day at 1998, there was no internet to learn cooking," explains Akira. With unhelpful workmates he would read books and carefully observe what the chefs were doing. In 1999 Akira travelled to Rome, Florence and Milan to learn more about Italian cuisine and it was there that he fell in love, "Of course food and wine but also I love the culture and people." Over the next few years he worked in French, Italian and Japanese restaurants and at age 30 decided to travel to Australia, attracted by Australia's multicultural mix.

Armed with a working holiday visa he arrived in 2007 and he recalls dining at Fratelli Paradiso in Potts Point where the chef was Japanese. " I was so surprised because the food was really classic Italian flavour and I believed the chef was Italian," says Akira. He asked for a job there but they had no need for chefs. Instead Akira started working at the Teppanyaki restaurant in The Ivy starting as chef de partie. One year later he became Head Chef and then after 3 years moved to Uccello working with Head Chef Eugenio Riva. 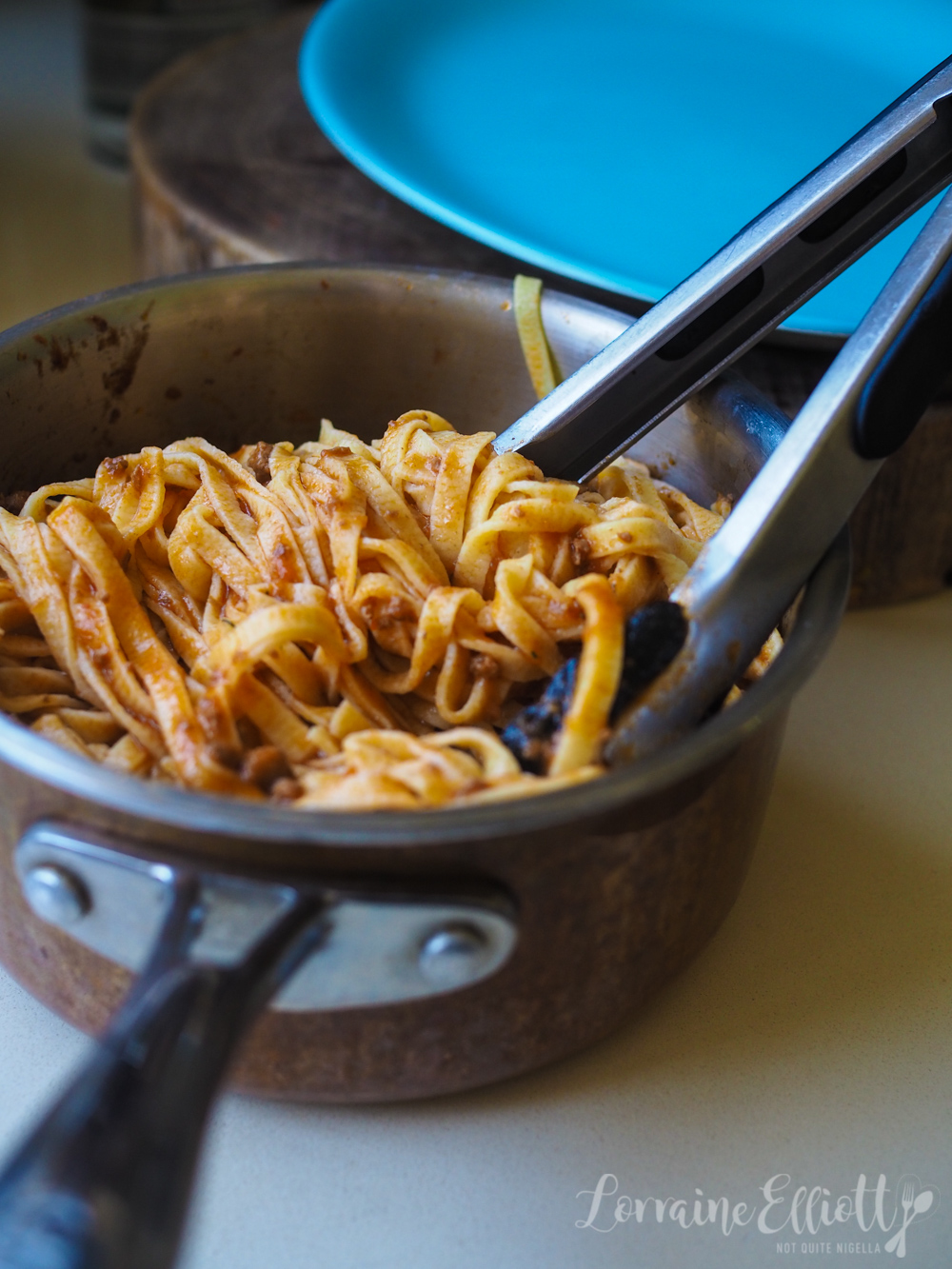 It was only then that he was ready to go back to Fratelli Paradiso to again ask them for a job in 2013. "Fratelli Paradiso made me who am I now," he says . He was challenged with a 7 day work week, breakfast, lunch and dinner service, a very small kitchen, a constantly busy trade and fortnightly menu changes that had to be approved by the 3 owners. He became Head Chef there in 2015.

While the 2020 pandemic brought closures with all staff losing their jobs they decided to do takeaway only and Akira was back in the kitchen. "When I was serving takeaway food at Fratelli Paradiso under the lockdown I was so stressed about serving container food," says Akira. He was accustomed to serving nicely plated food at the correct temperature - having to put a beautiful dishes into plastic containers was difficult. "I really wanted serve our dishes for takeaway at the same quality as what customers enjoy at the restaurant," he says.

He also lost some work hours, "I have 3 kids and I needed to survive somehow. I thought if I sell pasta and sauce separately and ask customers to finish them at home then they can get same as a restaurant dining experience at home." He started canvassing feedback from people on his Instagram page in exchange for free pasta and refined portion sizes and price based on 6 weeks worth of research. In May 2020 alongside working at Fratelli Paradiso he launched Pasta E Basta. He continued doing both jobs until September 2020 until he left to make Pasta E Basta his sole priority. During the 2021 lockdown he doubled his customer base. Nowadays he makes 240 - 300portions of pasta per week delivering them all himself. Akira takes orders via the Pasta E Basta instagram account and welcomes DMs as he prefers the personal connection with customers. 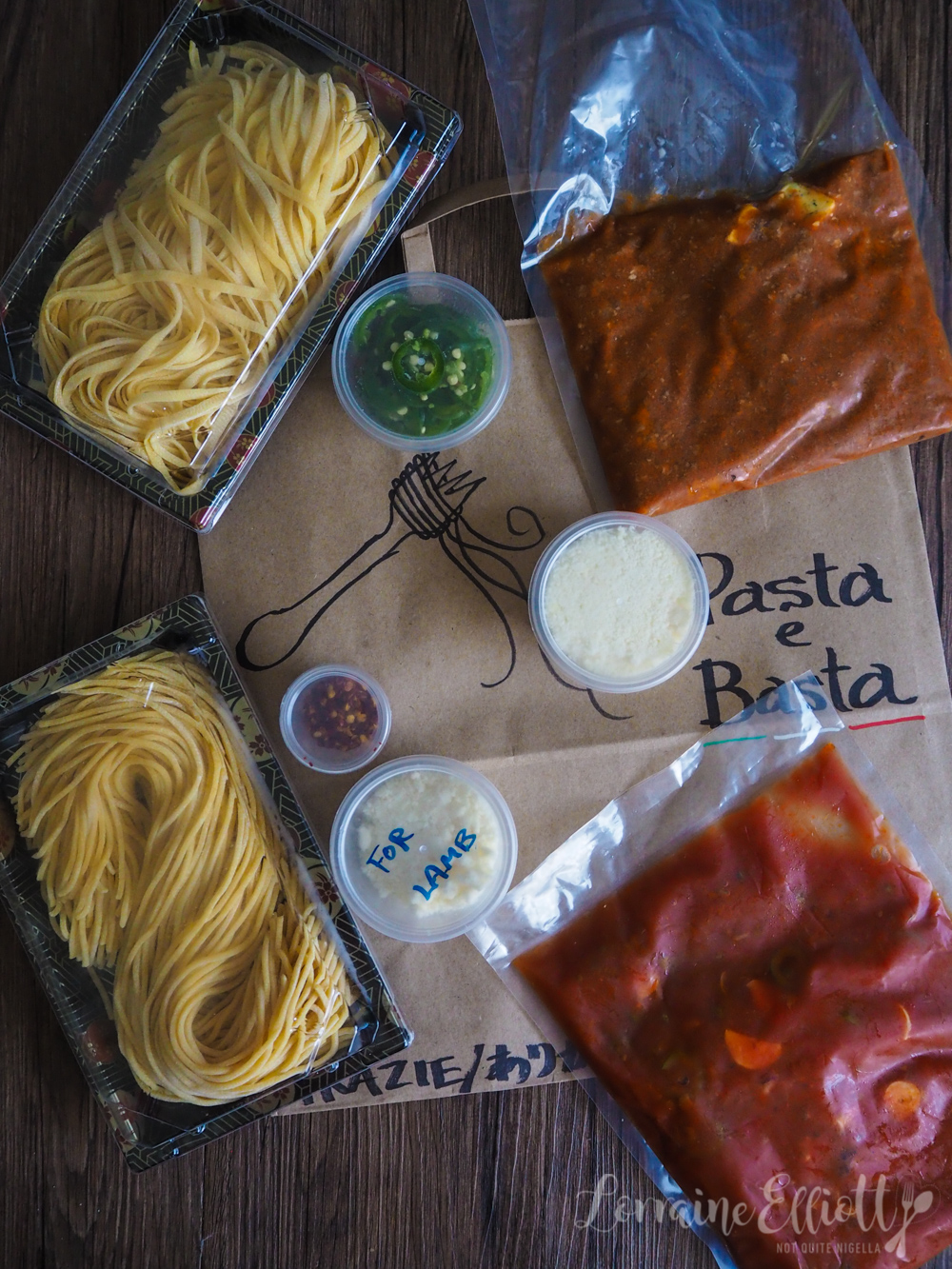 I miss out on ordering it a couple of weeks as I am too slow but one Monday morning just after 10am I manage to get an order. There are two pastas available: an spaghetti alla puttanesca with braised octopus at $34 for 2 people and a linguine with free range lamb ragu, fermented jalapeno, dill, chevre for $36 for two. All pastas serve two and prices include delivery to the following areas: lower north shore, inner city, North from Gordon and down to South, Eastern Suburbs and Inner West. Outside of these areas it is a $10 delivery fee with a minimum spend up to 30km from Gordon.

Both pastas come in a hand drawn paper bags in sushi takeaway containers and the sauces are vacuum packed with cheeses and additions on the side. The pastas can be frozen or last for up to 3 days in the fridge. 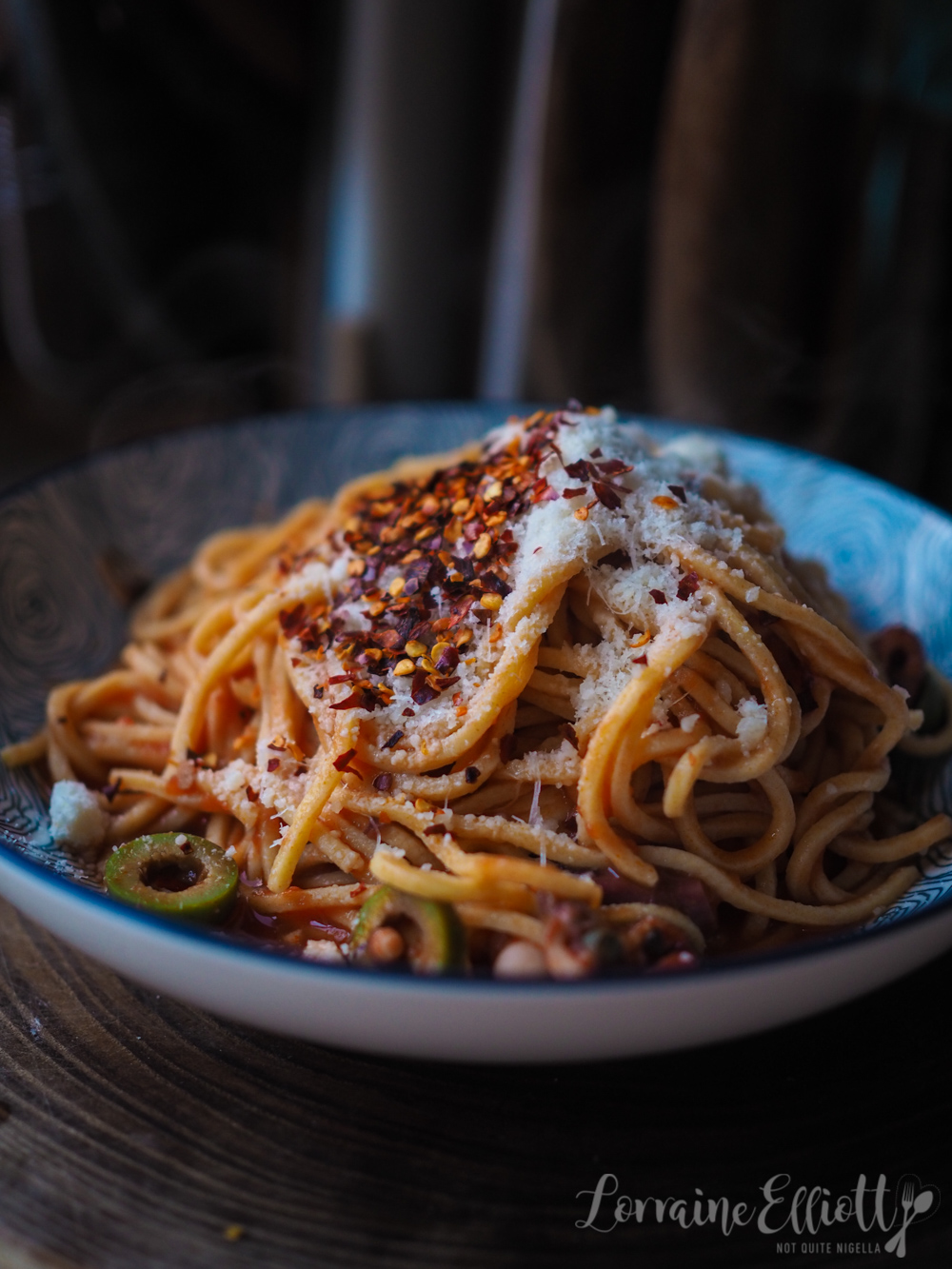 The pastas are super easy to cook and all you need is two saucepans. Akira sends through instructions when he delivers and you basically cook the pasta for 3-4 minutes depending on the type while heating up the sauce in another pot. Then add some pasta water to the sauce and then combine and you have dinner in less than 10 minutes. We first try the spaghetti alla puttanesca that has a generous serve of parmesan on the side and some hot chilli flakes that add an appealing spice. The pasta has a great texture to it and the serving size is spot on, especially with some focaccia I made on the side and a small salad. There isn't a lot of octopus in it but that may just have been bad luck for us. 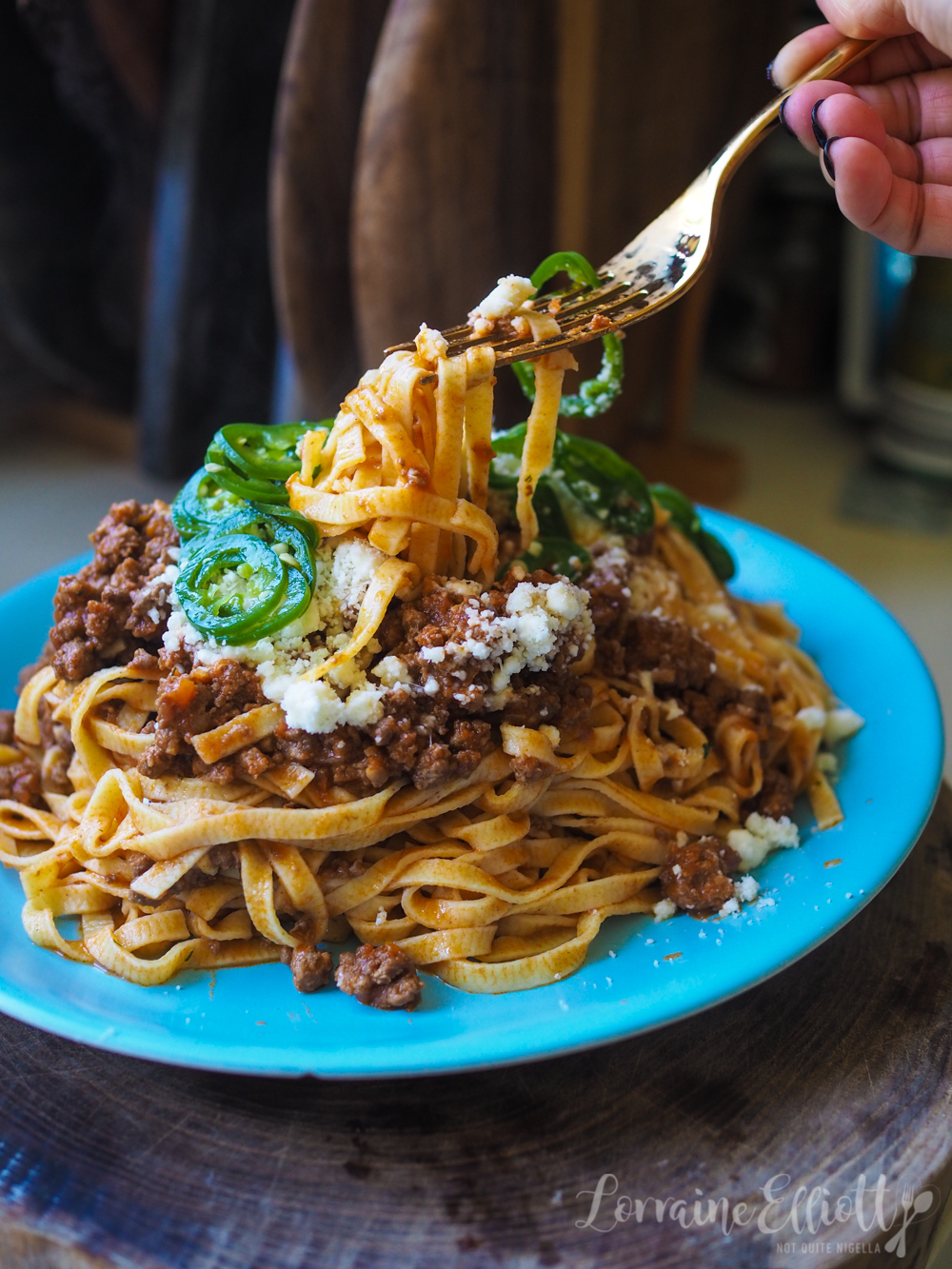 I make the lamb ragu 4 days later and the pasta still has a wonderful consistency without any clumping at all. The ragu is rich and divine, full of flavour and easy to cook in the same manner. It comes with finely grated chevre cheese and lightly pickled jalapenos. Again the serve is very generous and could even feed 3 if served with vegetables or salad. The pasta itself is wonderful and Akira mainly uses semolina flour and plain flour with some rice flour at end which make sure the pasta doesn't stick. And come 10am Mondays I'll probably have to start setting an alarm!

So tell me Dear Reader, are you still getting home deliveries of food now that we are out of lockdown?