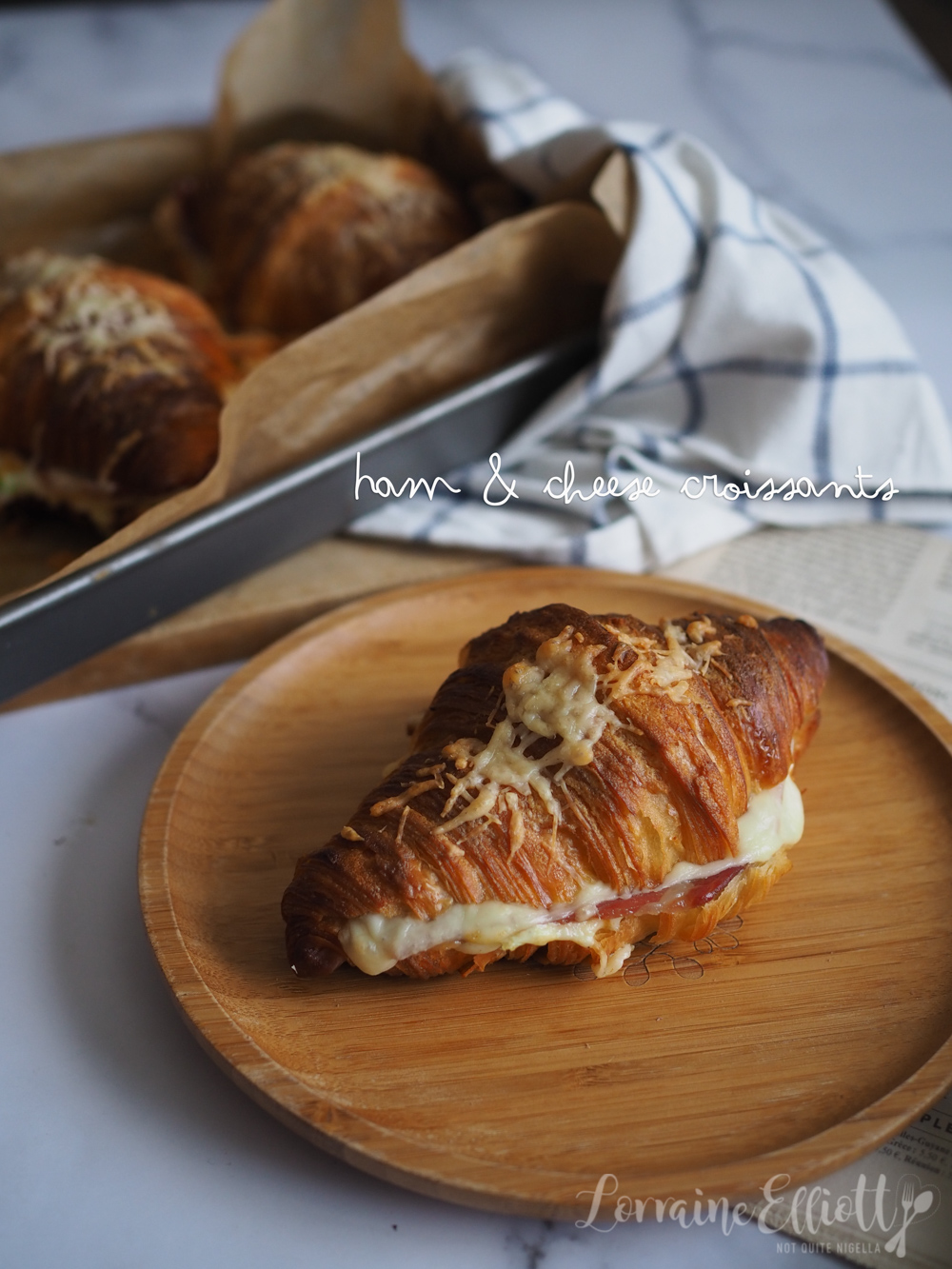 The perfect breakfast is crisp, buttery croissants filled with ham with a leek bechamel, Swiss cheese and a honey mustard glaze. Bring your weekend brunch or Father's Day to the next level with this ham & cheese croissant recipe! If you love pastry this is a pushy recipe Dear Reader!

We really miss going out to cafes but you can up your weekend brunch game with these HEAVENLY delicious pastries. The best thing about these is that you can do a lot of this ahead of time (the mustard butter and the béchamel sauce) so all you have to do is add ham, sliced cheese, sauces and heat up that morning! 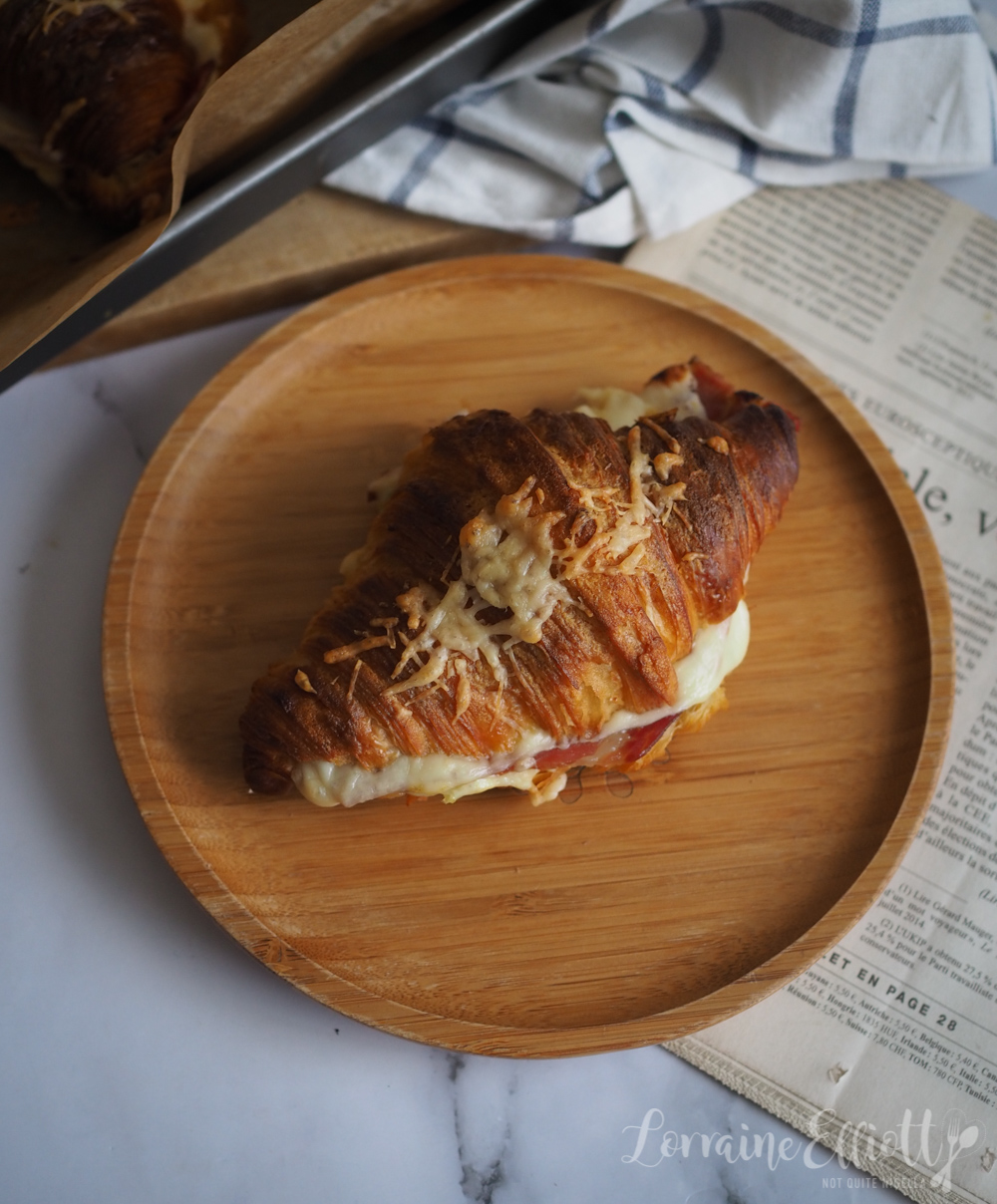 You can make these ham and cheese croissants ahead of time, place them on a lined baking tray and cover and store in the fridge. When it comes time to bake them just follow the instructions below. If they need a bit more crispiness just place them under a grill for a minute or two! If you make these for your dad I promise he'll love them!

((I did end up using bacon because that's all I had and you can definitely use that instead of ham, but just cook the bacon first)) 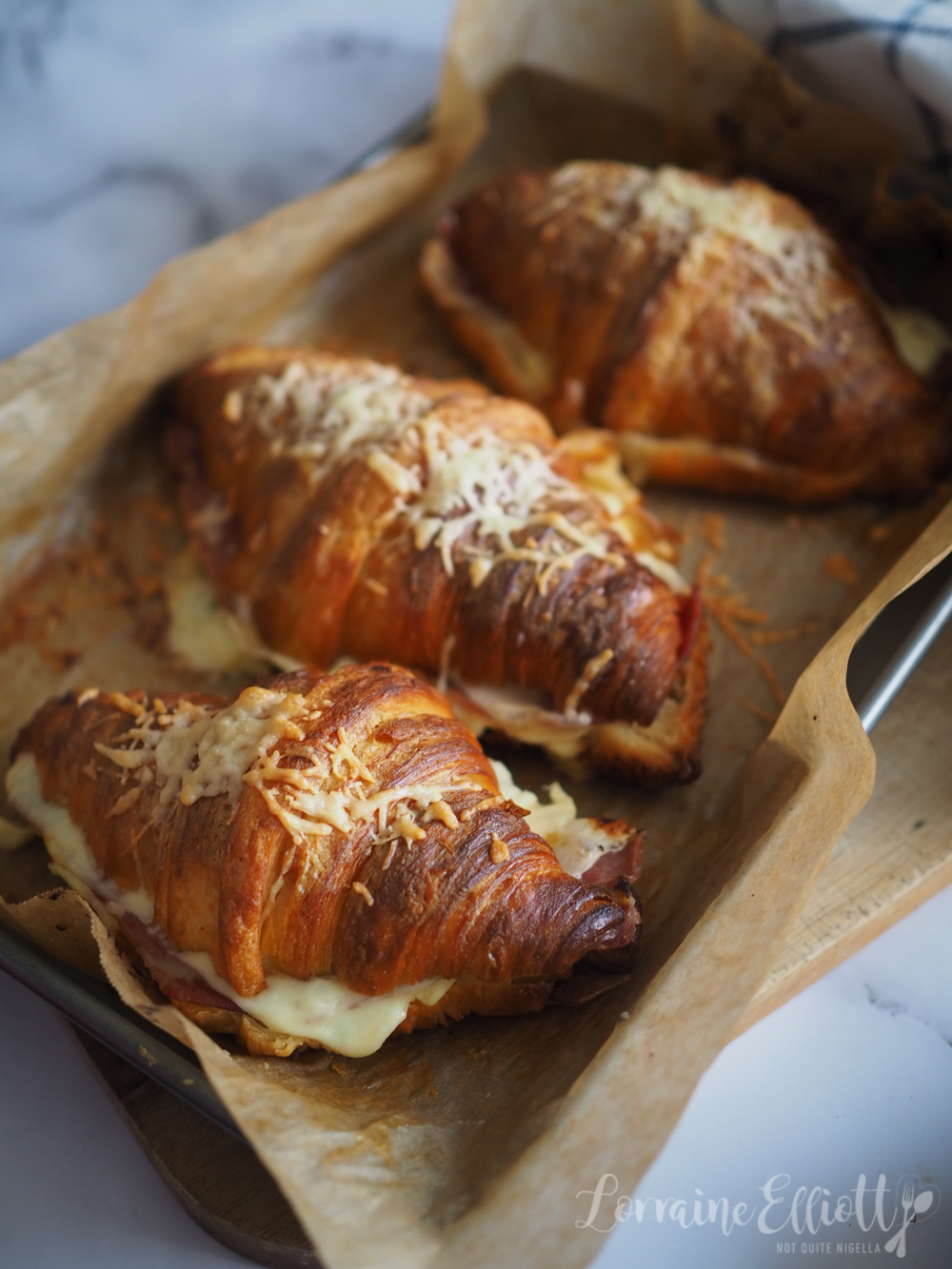 Speaking of dads we sort of celebrate Father's Day here because Mr NQN is father to Teddy and I like any reason to celebrate - even before lockdown a sunny day was just as good a reason to celebrate as any. Mr NQN has been happy enough during lockdown as it suits his introverted nature but sometimes I worry that he doesn't have any in-person interactions apart from me.

I was going meet Monica for a food swap and a walk around the park but the timing didn't work with the car so I suggested sending Mr NQN instead of me to do the food swap. Then Monica had a stroke of genius and suggested getting her partner Marco to meet Mr NQN instead. The two men get on so well - they both like to nerd out together on technical things or beer-making and really enjoy each other's company. Monica and I were really happy with our man-date plan. 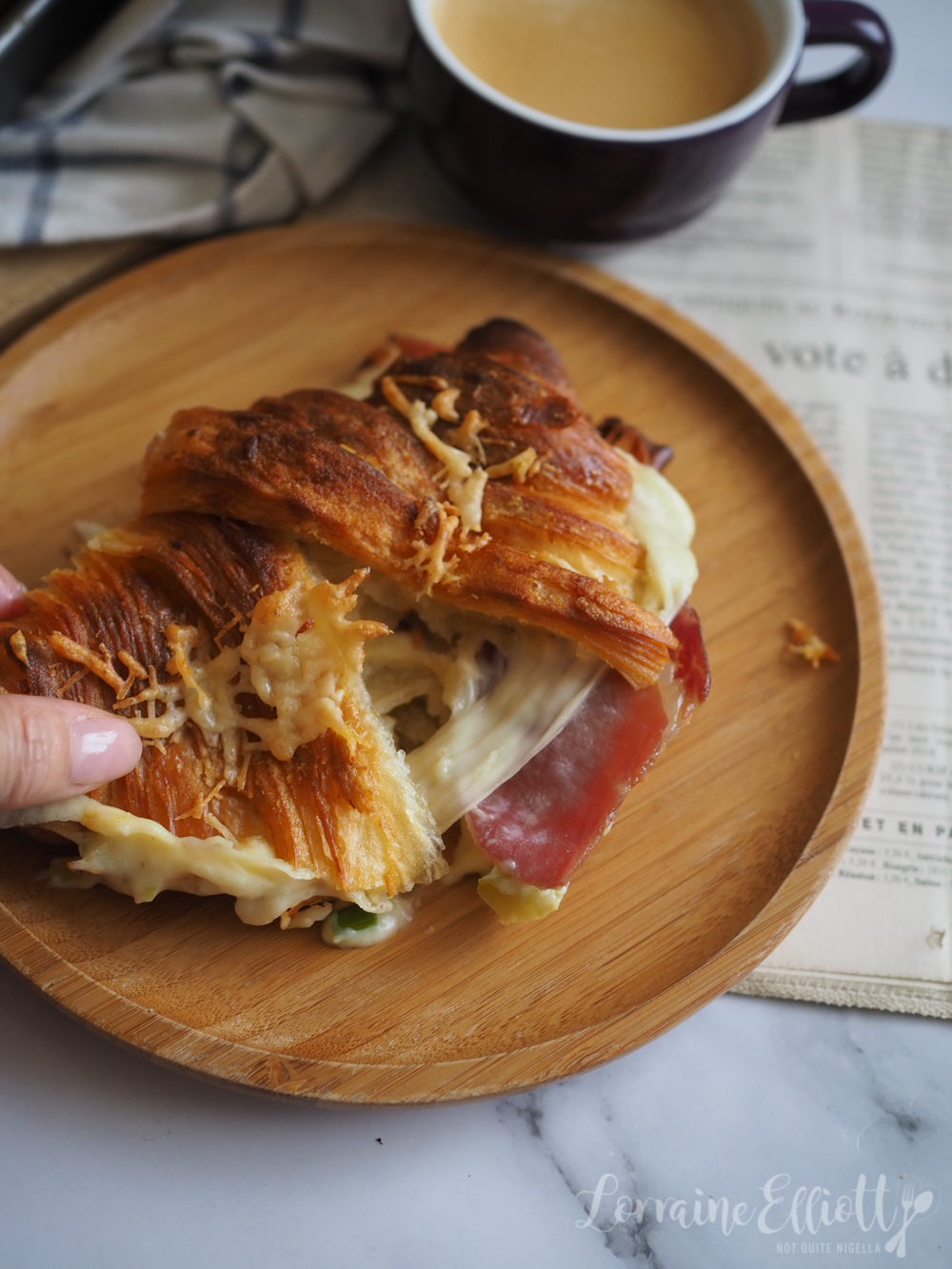 Because both guys are used to us arranging get social events, it took quite a few prompts to get them to finalise a time. Marco likes to be clear about his plans as early as possible. Mr NQN doesn't and he is as vague as he is tardy. "I'm running late!" he said to me as that morning as he was packing up his sailing gear into the car. "Message Marco, don't tell me!" I said as I was busy exercising.

After he left I completely expected to get a message telling me that he couldn't find Marco was but to my surprise I didn't hear anything for the next 1.5 hours. Could it be that the man-date had gone off without a hitch? When he came home later that day I asked him how it went. "Yeah fine, no problems. Did you expect problems?" he said. "Um yes!" I said.

It wasn't until later on further prompting when I asked him why they had taken so long that Mr NQN told me that it hadn't quite gone without a hitch. Even though I had mentioned the Alexandria Park location at least half a dozen times, he went to Rosebery Park. It was only when Marco had shared his location on google maps that he realised that he was at the wrong location!

So tell me Dear Reader, are you like Marco or Mr NQN when it comes to plans? Do you ever plan dates for other people? And do you like pastries? 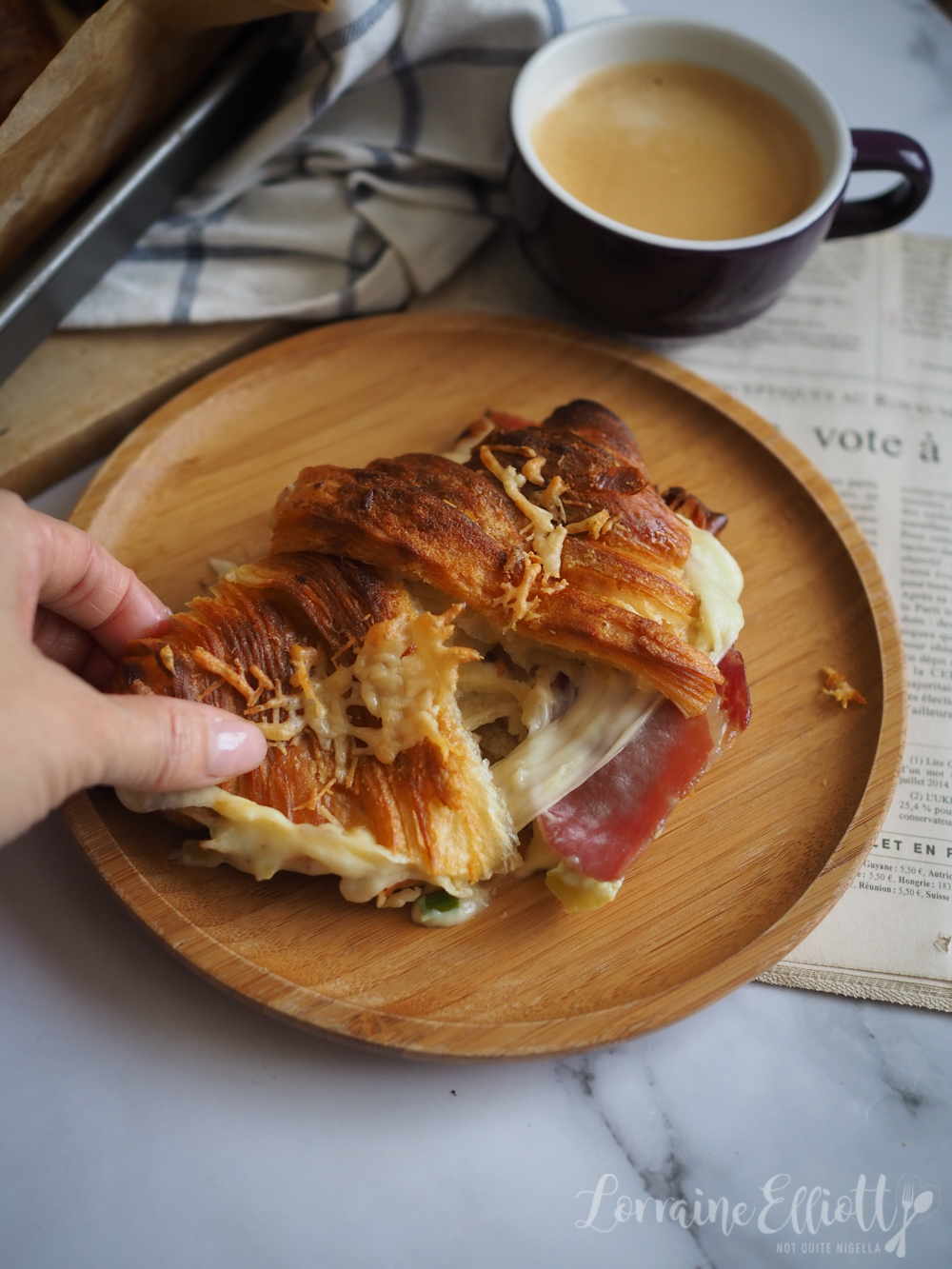 Step 1 - First make the leek béchamel. It is a bit easier to deal with the béchamel sauce once it has cooled a little so I prefer to make this first. Heat the butter in a small saucepan and then add the leek and sauté on medium heat for 5-6 minutes until softened and fragrant. Remove from the saucepan and set aside. Then add the second lot of butter and melt and then add the flour, mix into the butter and cook for a minute. Then switch to a whisk and add the milk in gradually so that it combines in smoothly. Switch back to a spatula and add the mustard and mix. Add the parmesan and sautéed leeks and cool (you can also use it straight away but it firms up more upon cooling). Season with salt and pepper.

Step 3 - Line a baking tray with parchment. Divide the ham among the croissants and spoon 3 generous tablespoons of béchamel sauce on top of the ham on each croissant. Top with 1.5 slices of Swiss cheese and place the top half on the croissant and place on the tray. 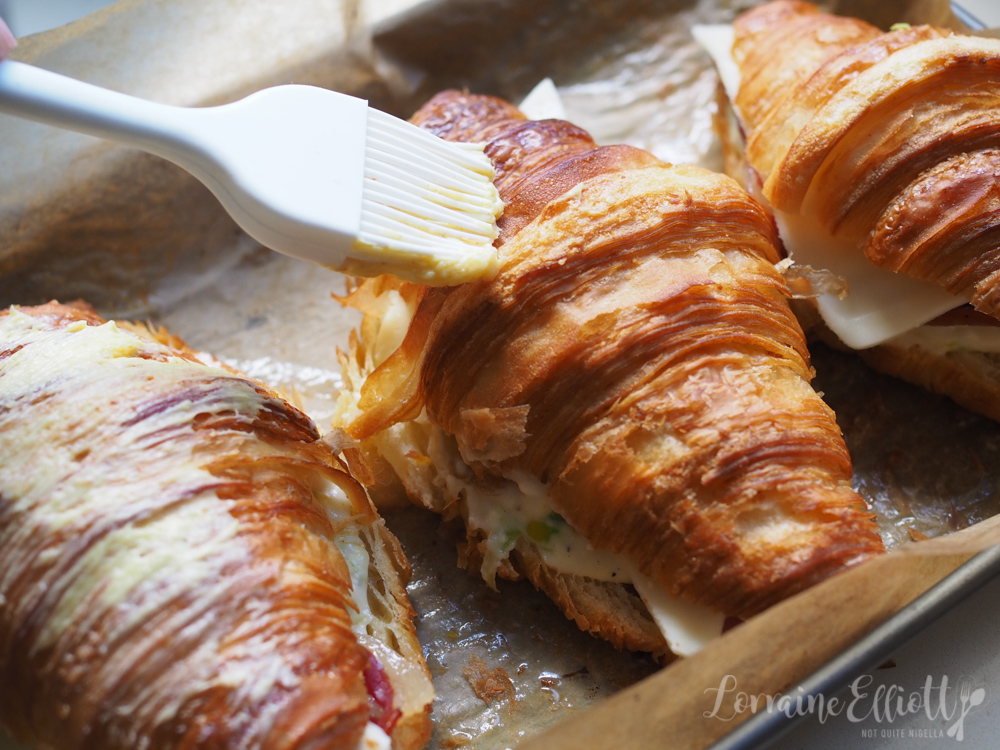 Step 4 - Mix the melted butter, mustard and honey together and brush over the tops of the croissants and bake for 20 minutes. Sprinkle with parmesan and bake for another 5 minutes. 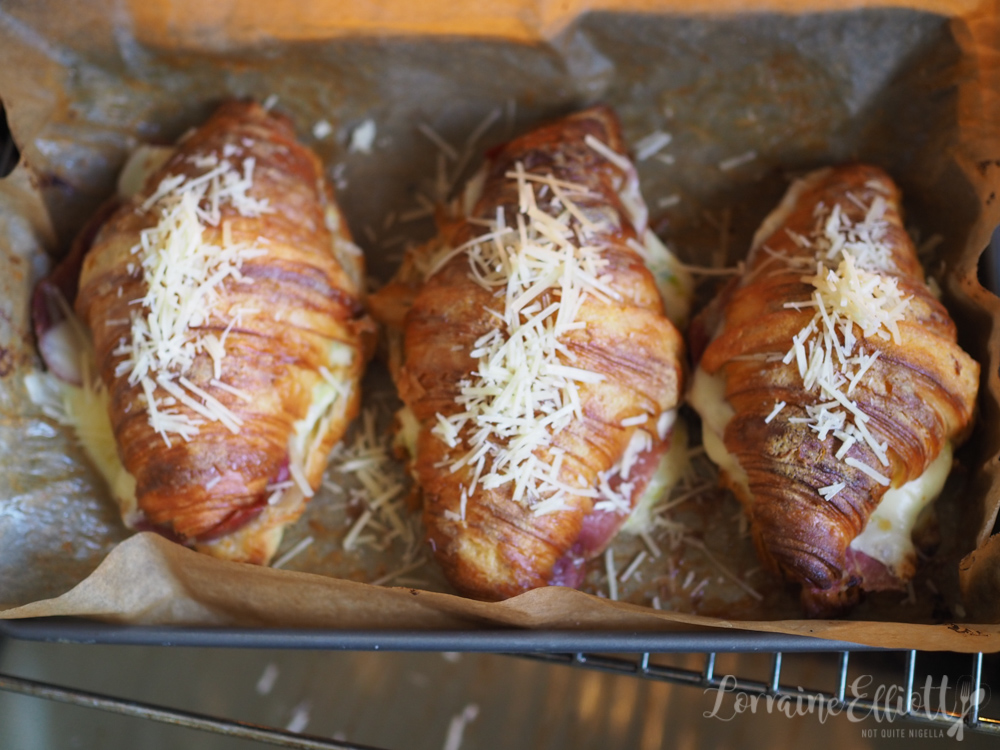