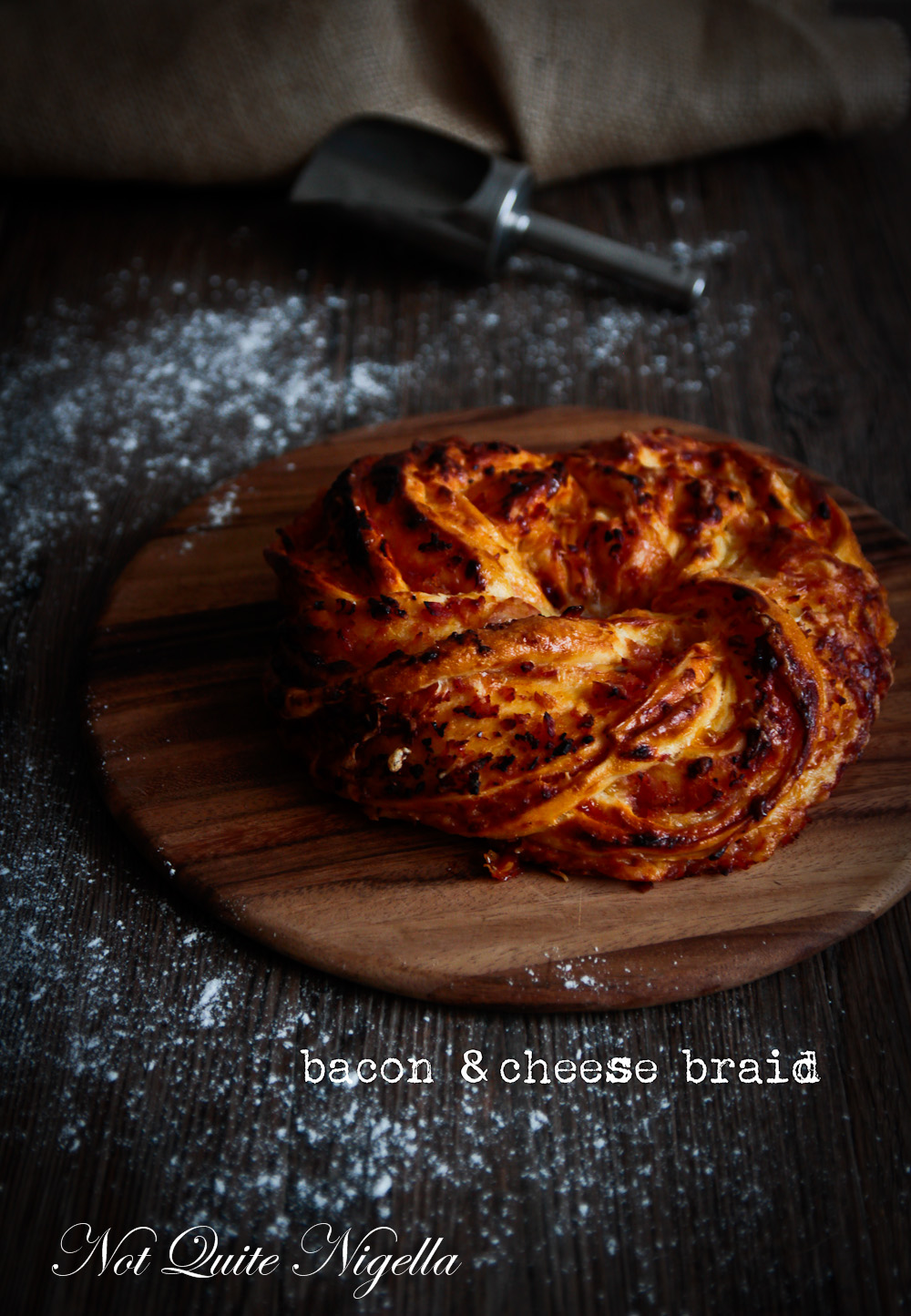 Dear Reader, when you are driving and stopped in traffic, do you ever notice people next to you with a huge gap between them and the car in front of them? It seems to happen a lot in traffic and I often crane my neck around to see whether the driver is looking or paying attention. Usually they are looking straight ahead.

"Ghost cars," I said to Mr NQN one day. He turned and regarded me quizzically. I'm used to that look.

"Ghost cars! They can see ghost cars when we can't!" I said as a way to explain the car length gap between cars. 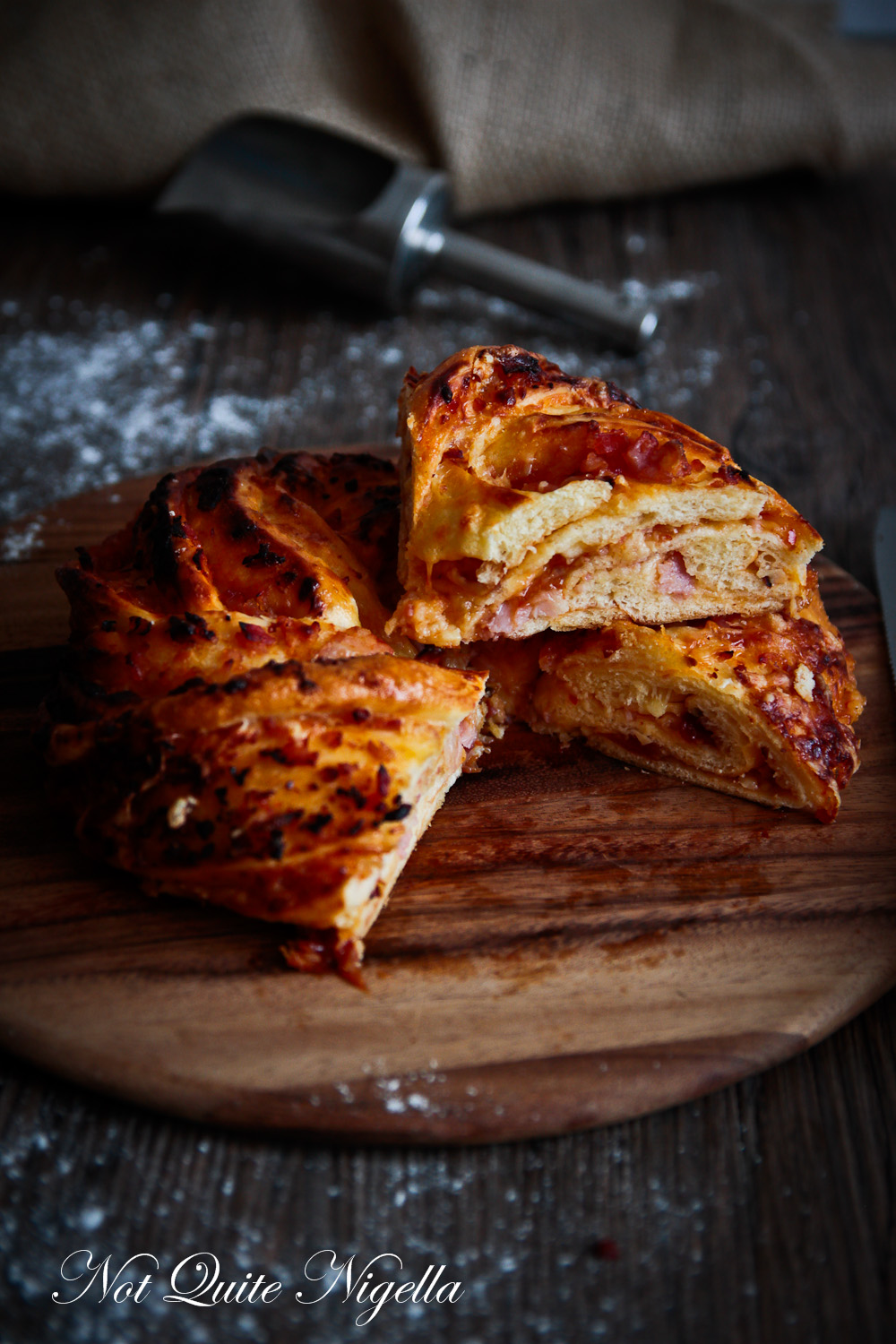 Whilst I don't see ghost cars, I could swear that I saw ghost bacon in my fridge. I'm not sure what happened to my three rashers of bacon that I had stowed away carefully to make this cheese and bacon braid. I doubt Mr NQN ate them because they require cooking and the poor boy doesn't know how to cook bacon.

You see I carefully timed making this bread. I've made it several times already and it reminds me of those old fashioned bacon and cheese rolls where you'd lift off the bacon and cheese from the top before having to eat the rest. These are inspired by those but are so, so much better. The reason for timing these is because they are almost impossible to stop eating. I once ate half of this braid without caring a jot. All of it while standing in front of the sink wearing my gym gear mind you which has become a rather disturbing habit... 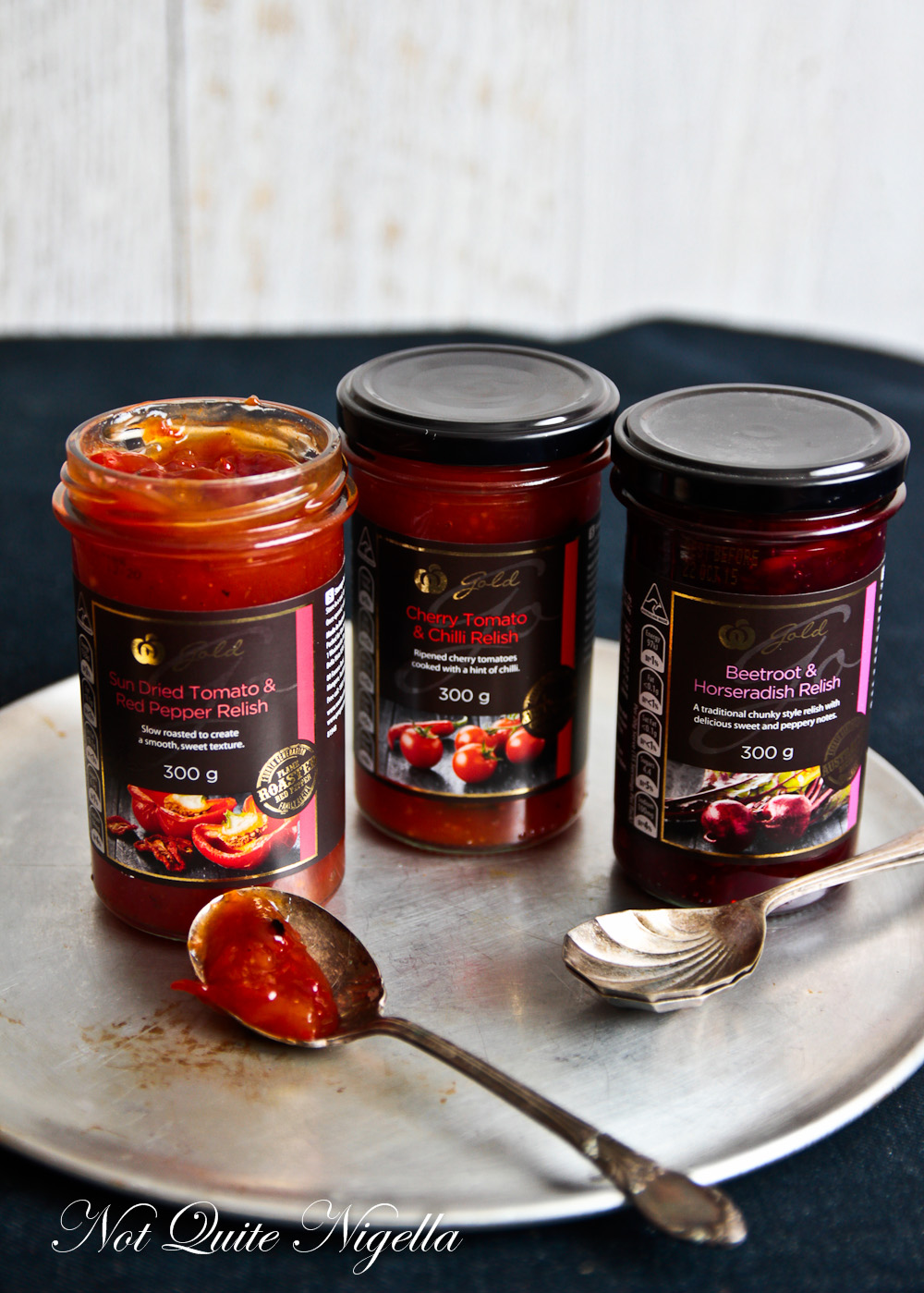 In this recipe I used the Woolworths Gold sun dried tomato and red pepper relish which is a fourth generation family recipe using fire roasted red peppers. In the relish range there is also a cherry tomato & chilli relish, Spanish red onion relish and a beetroot and horseradish relish in the line. These relishes with their sweetness would stand up to the salty savouriness of a pesto and give this bread a flavour burst. Because if there is something that this bread has, it's plenty of the good bits!

And yes this is a pushy recipe but one with a caveat. Please don't blame me if you can't stop eating it! :)

So tell me Dear Reader, do you like lots of flavours or fillings in bread? And have you ever noticed the ghost car gap? 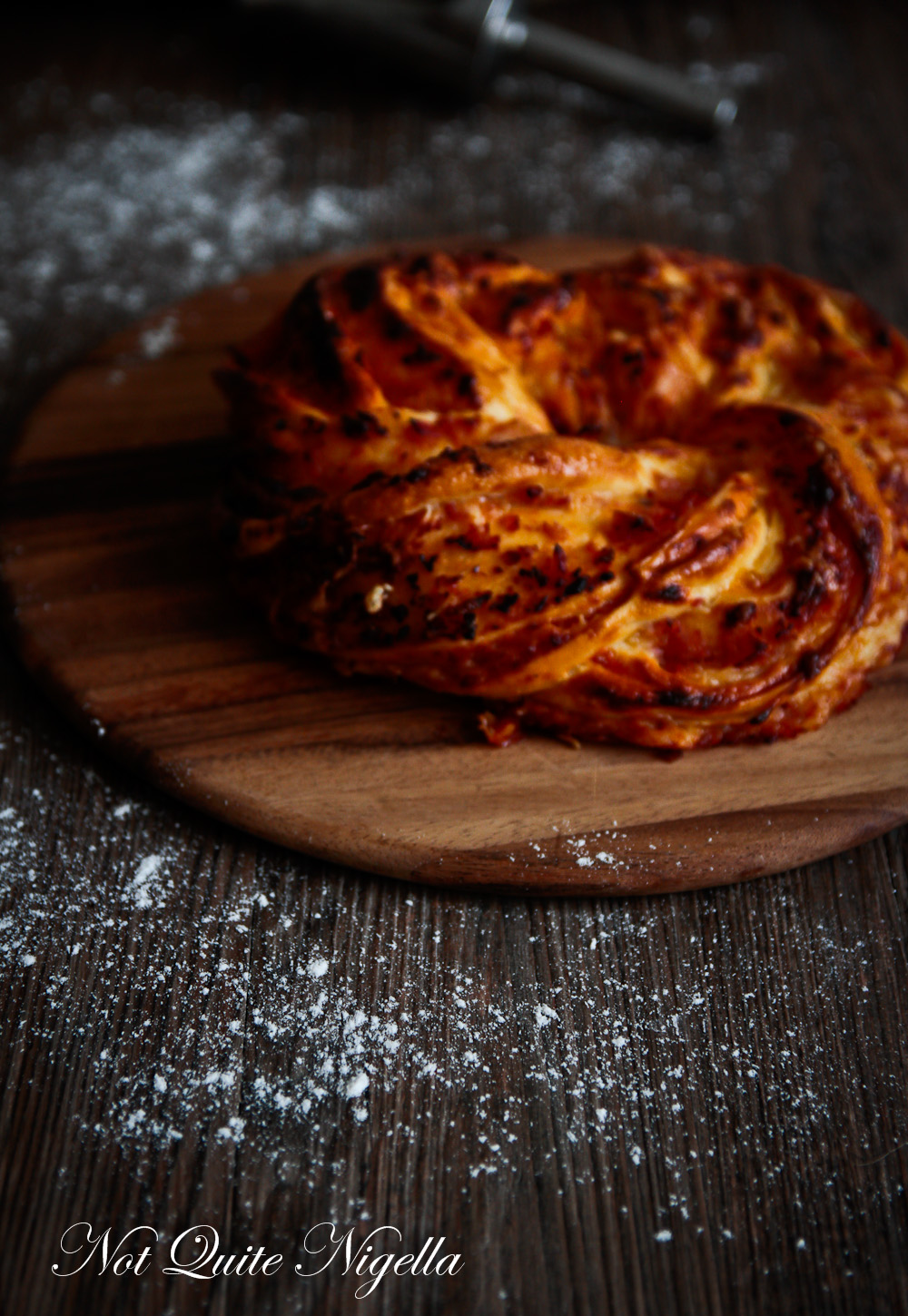 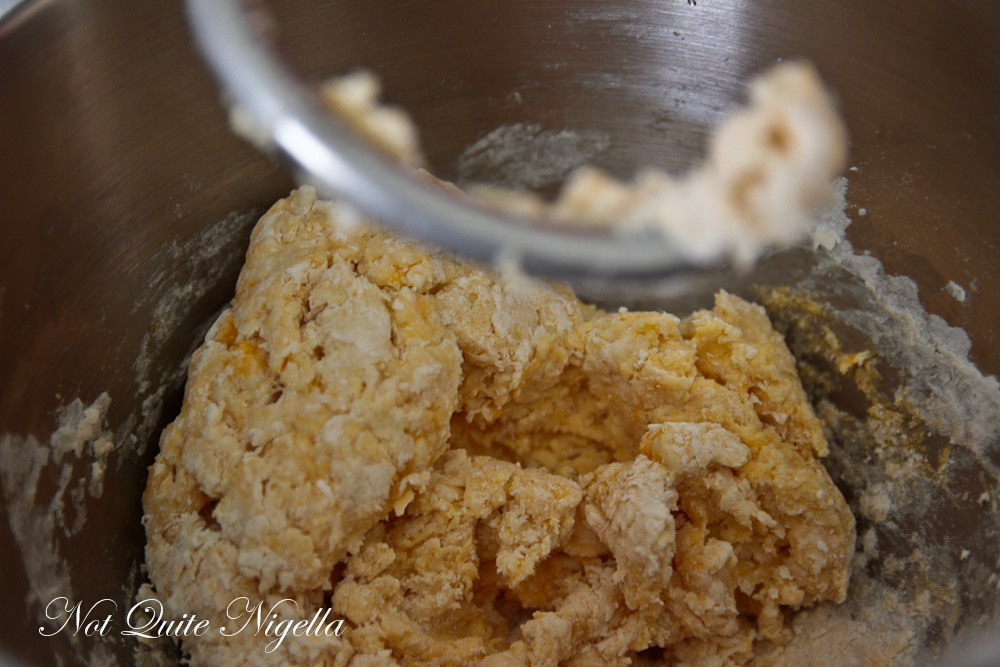 The flour, yeast, water and eggs mixed together

Step 1 - Mix the flour, yeast and water in a mixing bowl and fit the mixer with a dough attachment. On low speed, add the eggs, one at a time and then add the butter a couple of cubes at a time. Mix on medium to high speed until the dough pulls away from the side of the bowl. Using a scraper, form into a bowl and place in a bowl. Sit in a warm draught free place and allow the dough to rise 1-2 hours. 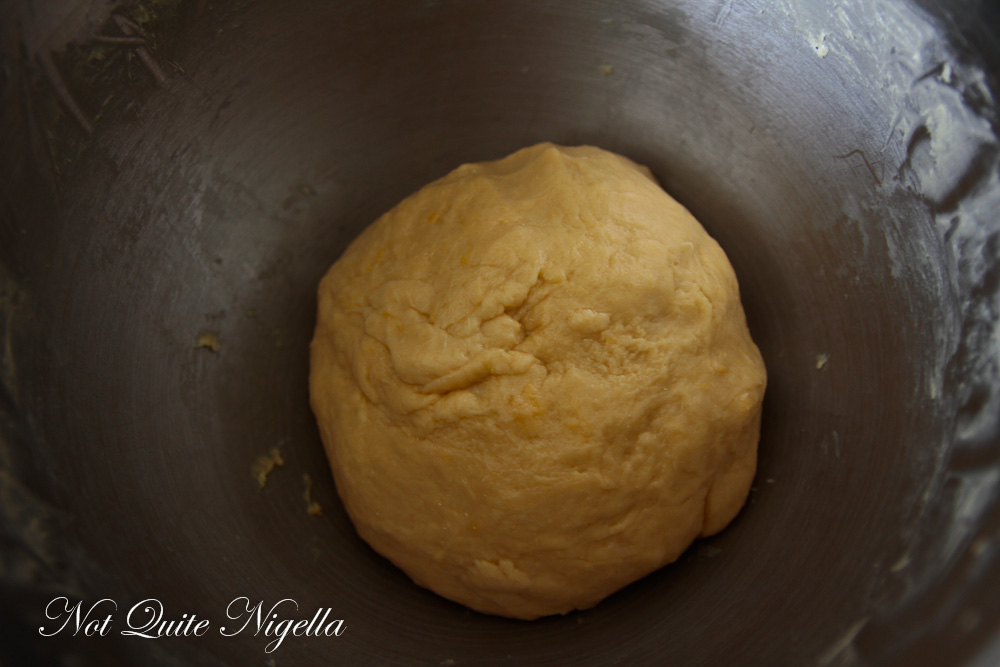 Step 2 - Punch down the dough and knead in the salt for a minute. Allow the dough to rest for 15 minutes. Line a baking tray with parchment and take out a rolling pin. Then flour a clean surface and shape the dough into a rectangle. Roll out until you can get a 40x30cm/16x12inch rectangle or thereabouts. 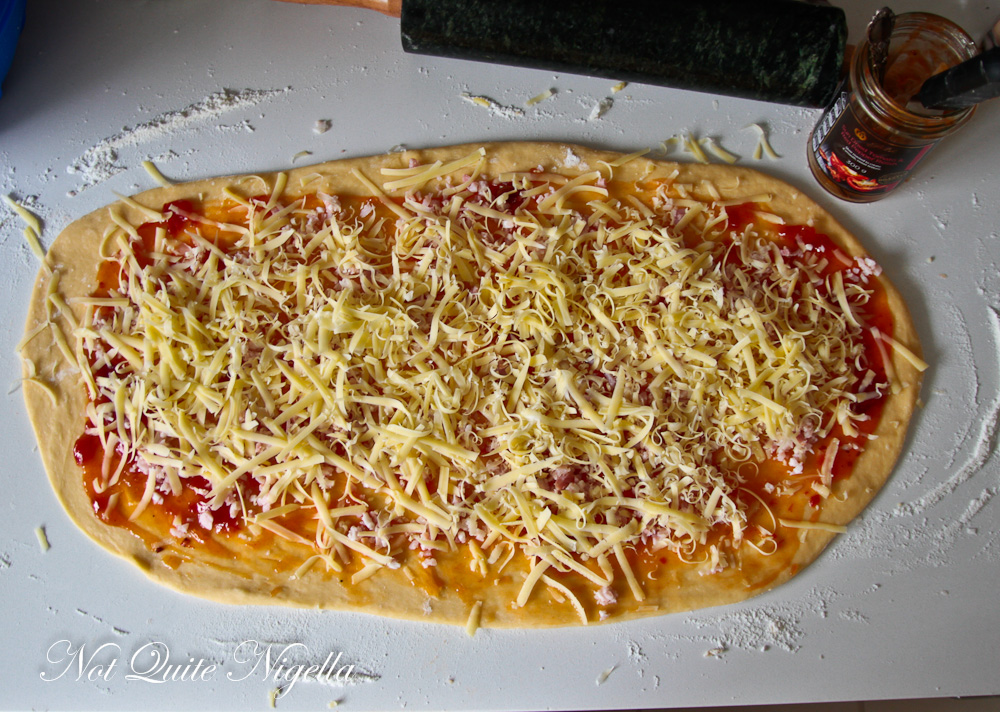 Step 3 - Mix the relish and pesto together and spread it on the dough and then top with the bacon and cheese. Roll it up from the longest end until you get a long sausage. Cut off the ends so that it is neat and slice down the centre of the log lengthways so that the filling shows. Lay the two halves criss crossing them and then form a circle. Allow to rise a second time for 30 minutes. 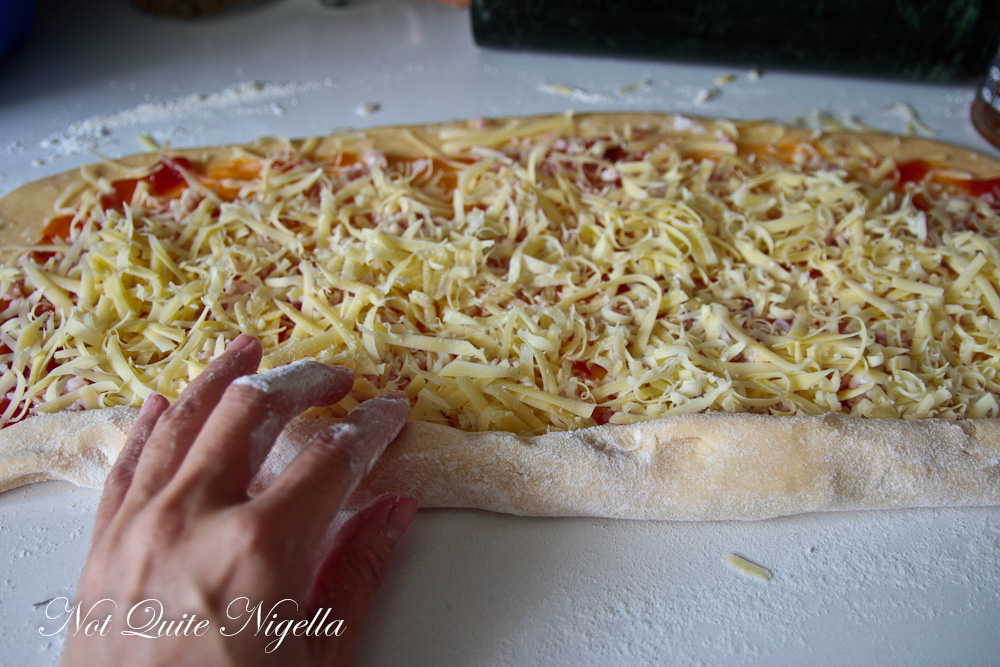 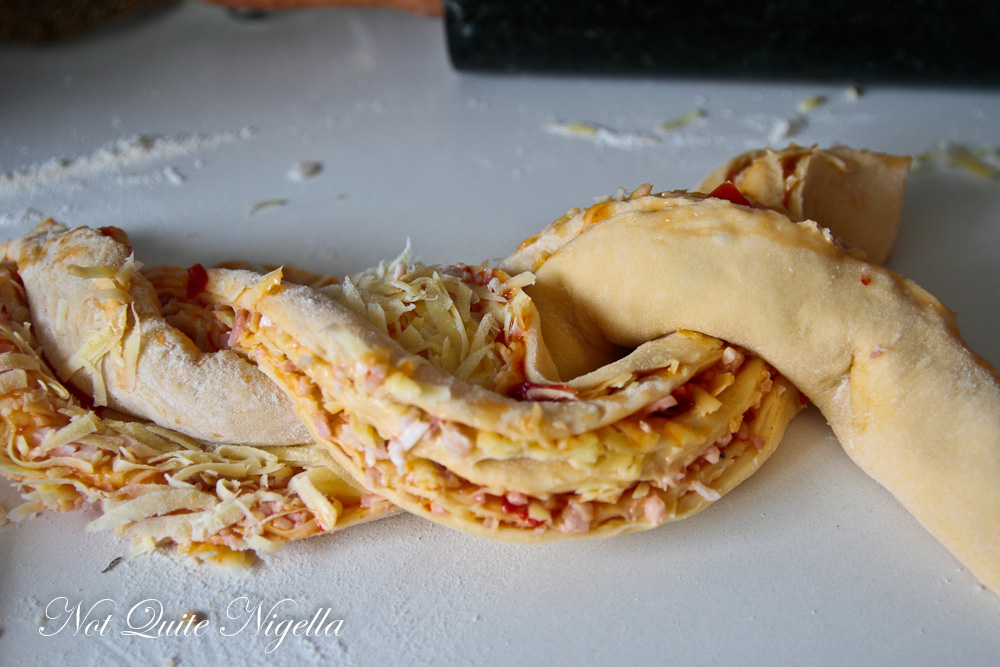 Step 4 - Preheat oven to 190C/380F. Brush the braid with egg wash. Spray foil with non stick oil spray and cover the braid then bake for 15 minutes. Remove foil and bake uncovered for another 10 minutes. 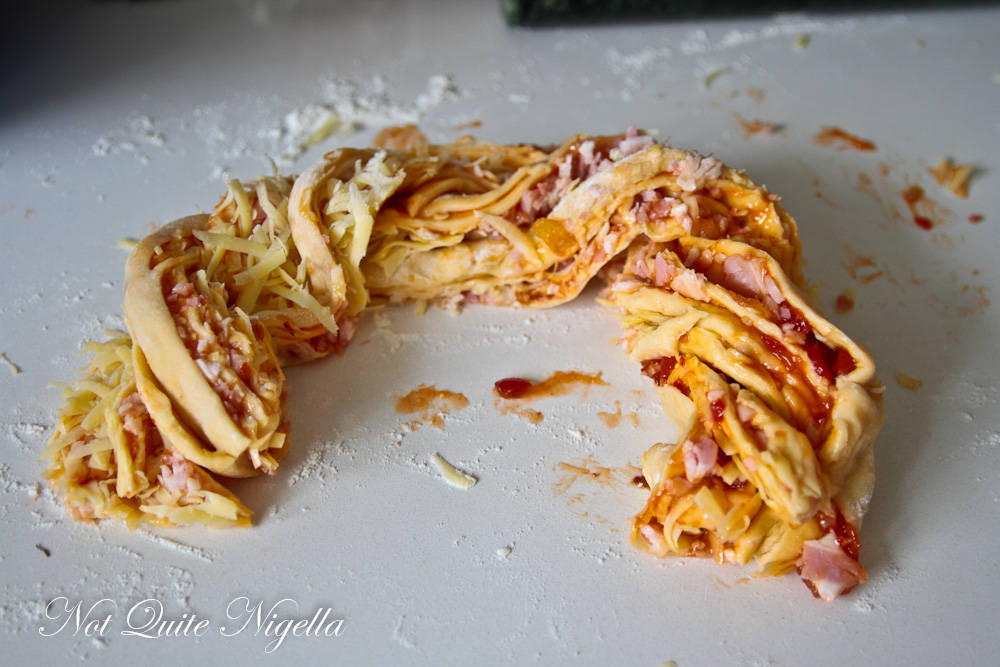 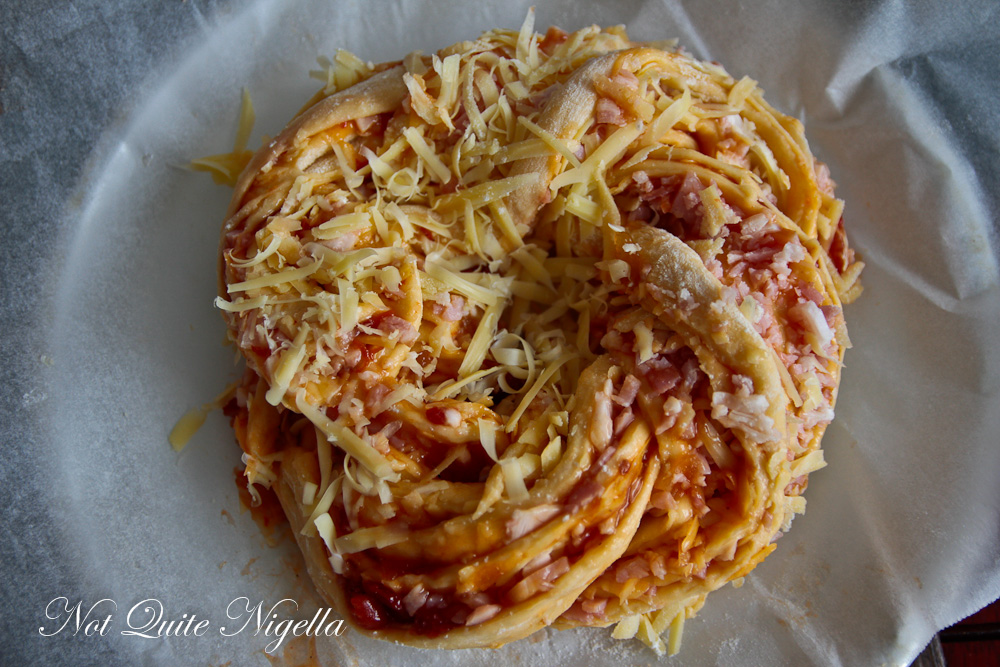